This hike into Scorpion Canyon just beyond the Scorpion Ranch Campground provides hikers with an opportunity to get some serious leg-busting trail time (if you take the counterclockwise route) or alternately, just some plain ol’ moderate leg-busting trail time, along with incomparable views of the California coastline, artifacts from the island’s ranching history, and a chance to see the island scrub-jay, the only island endemic bird species in North America.

This hike begins near the Scorpion Anchorage, where some of the remaining buildings from Scorpion Ranch serve as a ranger station and visitor center. Pop in to learn about the island’s Chumash and ranching history and then head to the south side of the building, where this hike track begins.

The first part of this route follows the directions to Smuggler’s Cove — a lengthy but extremely worthwhile trek on Santa Cruz Island. A great option for a long day hike is to hike to Smuggler’s Cove, then return back via Scorpion Canyon, which lets you get a nice taste of Santa Cruz Island’s geography. The trail through Scorpion Canyon is definitely rougher than the Smuggler’s Road route, but if you’re not pressed for time, it’s the route I recommend. 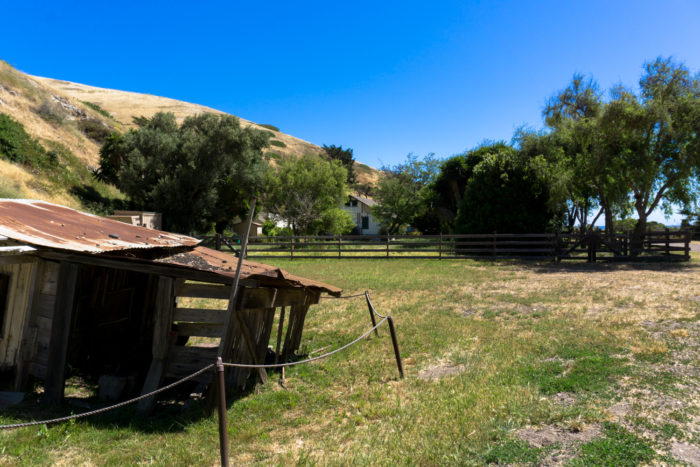 Walk toward the campground and in less than 0.1 mile, turn left to head south on Smuggler’s Road. Keep your eyes peeled for an old windmill, and know that if you’re entering the campground you’ve gone the wrong direction! If in doubt, just look for the road to the south that that goes up. 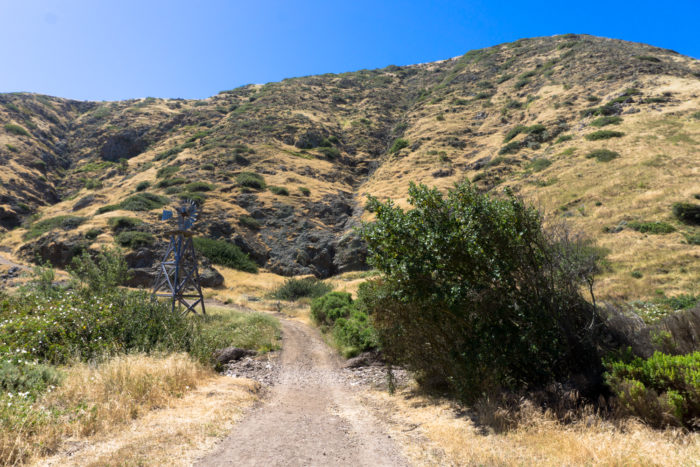 This road loops around the southern canyon wall near Scorpion Anchorage, providing a great vantage point for the landing, the sea kayakers, and the beachgoers.

As you climb this first stretch of Smuggler’s Road, be sure to watch the steep, rocky cliffsides along the road for some prime examples of the Channel Islands’ diverse community of fascinating Dudleyas. 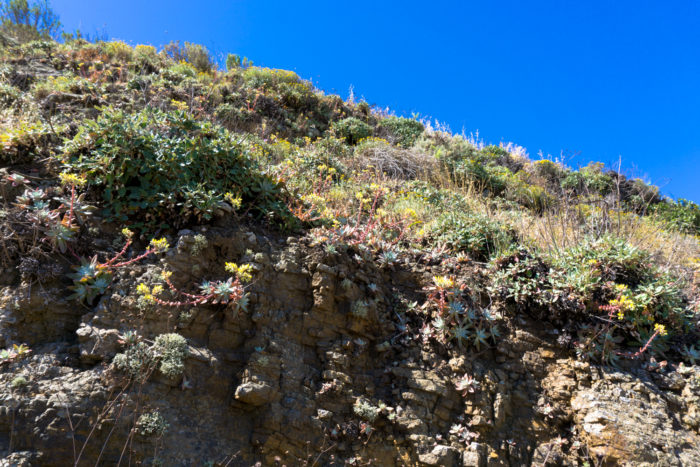 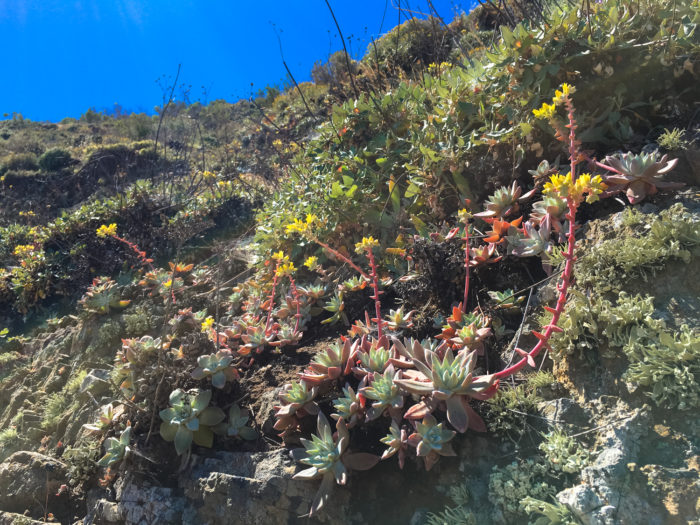 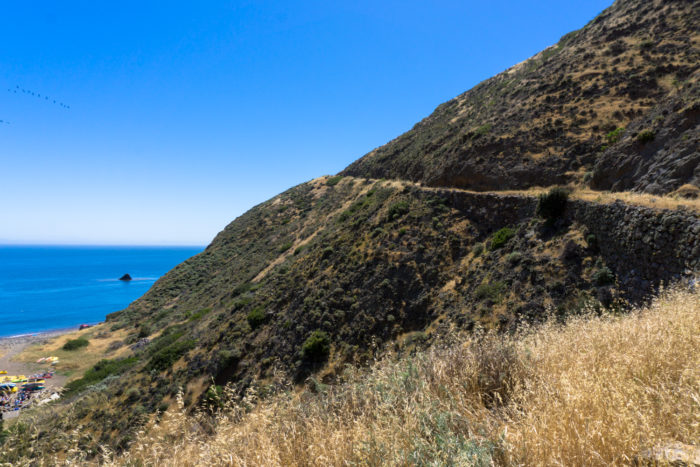 By the 0.4 mile mark, you still have a lot of uphill left but at least you start to get some new views — here, you’ll see the broken island of Anacapa come into view for the first time since your boat ride in — and it’s a lovely sight. 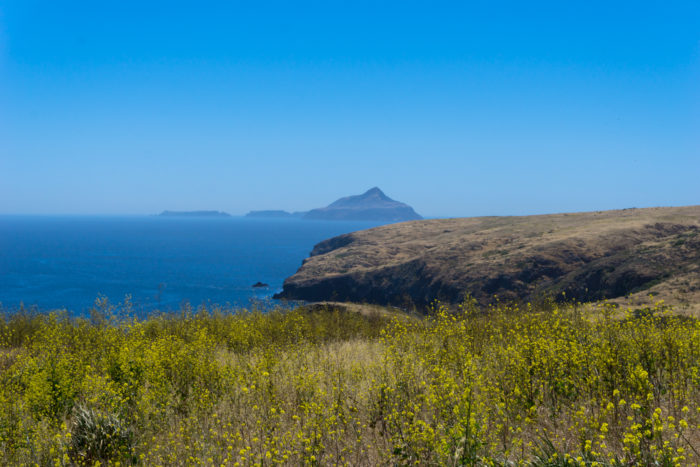 Ahead of you lies more incline — you’ll be climbing up on Smuggler’s Road for a while, reaching a short but welcome plateau around 1.1 miles and another quick, steep climb at 1.5 miles. Santa Cruz Island’s boney backbone Montañan Ridge takes up the full forward view for most of this section of the hike. 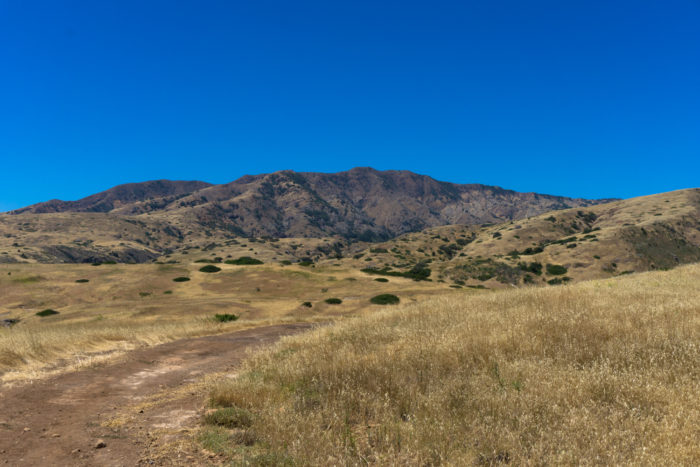 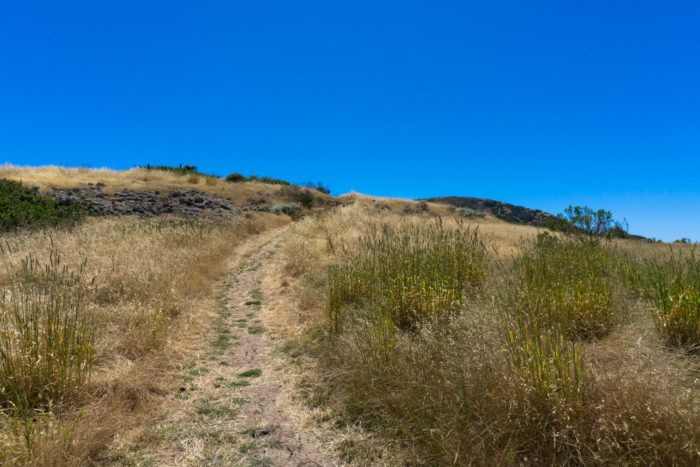 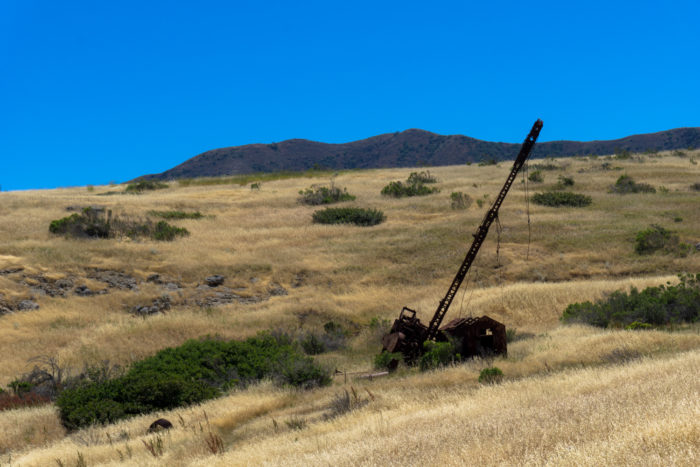 It’s a short side trip from the trail to approach this exploratory well, which was drilled in 1966 by Atlantic Richfield. This particular well struck water instead of oil, but the results proved intriguing enough to the owners of the Scorpion Ranch that they entered into a leasing agreement with Union Oil — but unfortunately for them (and fortunately for today’s National Park travelers), the 1969 Union Oil spill off the coast of Santa Barbara turned public opinion sharply against oil drilling. That spill was the largest in American waters at the time (today it ranks third largest), spilling 80 to 100,000 barrels of oil into the Santa Barbara Channel, devastating marine life and the picturesque coastline near Santa Barbara and helping to inspire the first Earth Day the following year.

Turn right onto the Scorpion Canyon Trail to begin your extremely steep descent back down to sea level. 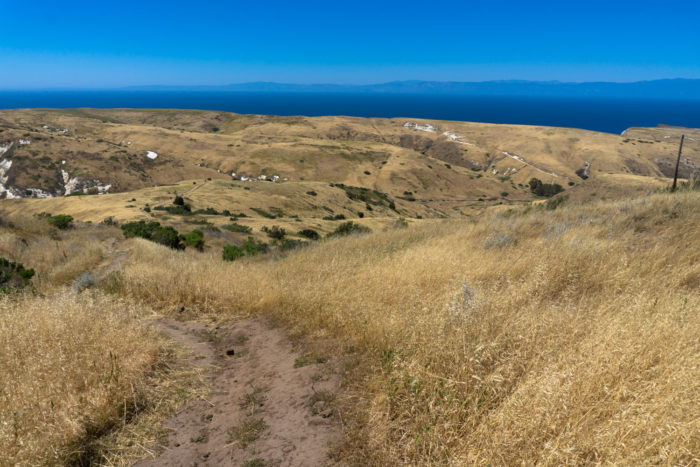 This trail initially follows the old pipeline from the well (which is still intact in several places) then descends a steep, rocky ridgeline that will definitely let your knees know you’re hiking.

The terrain here is very lovely — you’ll have a full-on view of the coastline of Santa Barbara and beautiful rolling hills and cliffsides in every direction. This is the part of the hike where you’ll likely be extremely happy you hiked it counterclockwise. 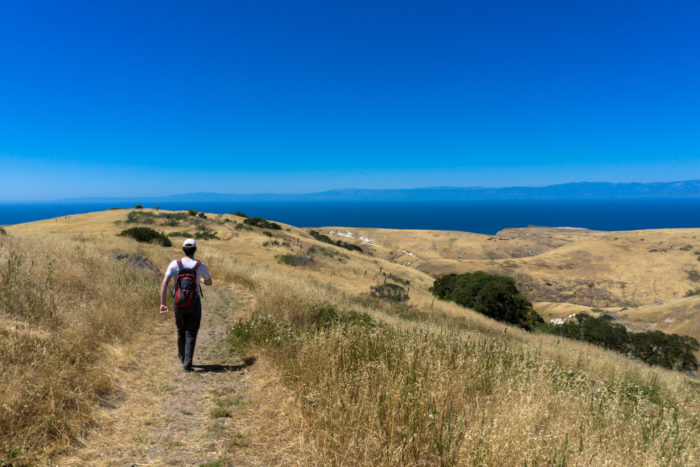 As this part of the trail dips down into native oak woodland, you’ll have a chance at spotting the island scrub-jay, a bright-blue, larger island version of its mainland relatives. This bird only lives on Santa Cruz Island, making it the bird species with the smallest range in all of North America. If you want to familiarize yourself with these birds before you hike here so you can actually know what you’re looking for, both the National Park Service and the Audubon Society have tons of information.

By 2.9 miles, the trail dips down near a rocky arroyo, which it follows back to the Scorpion Canyon Campground. 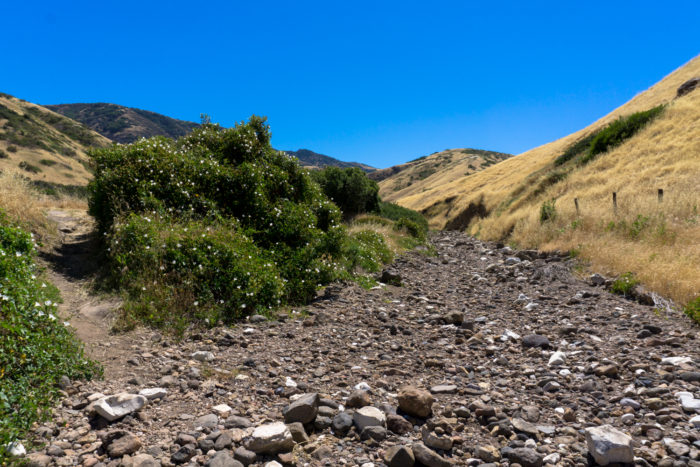 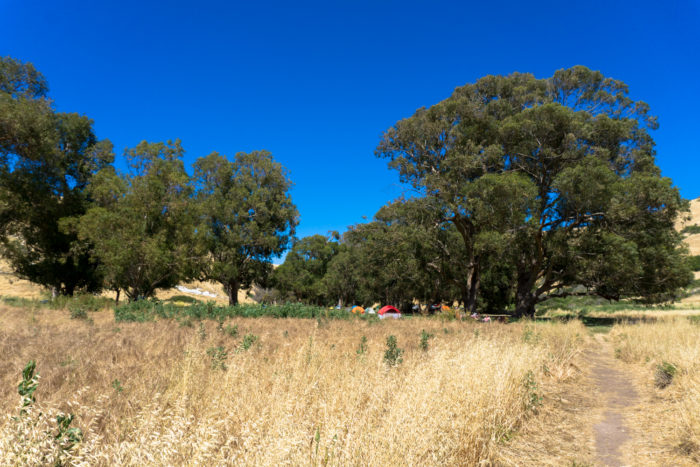 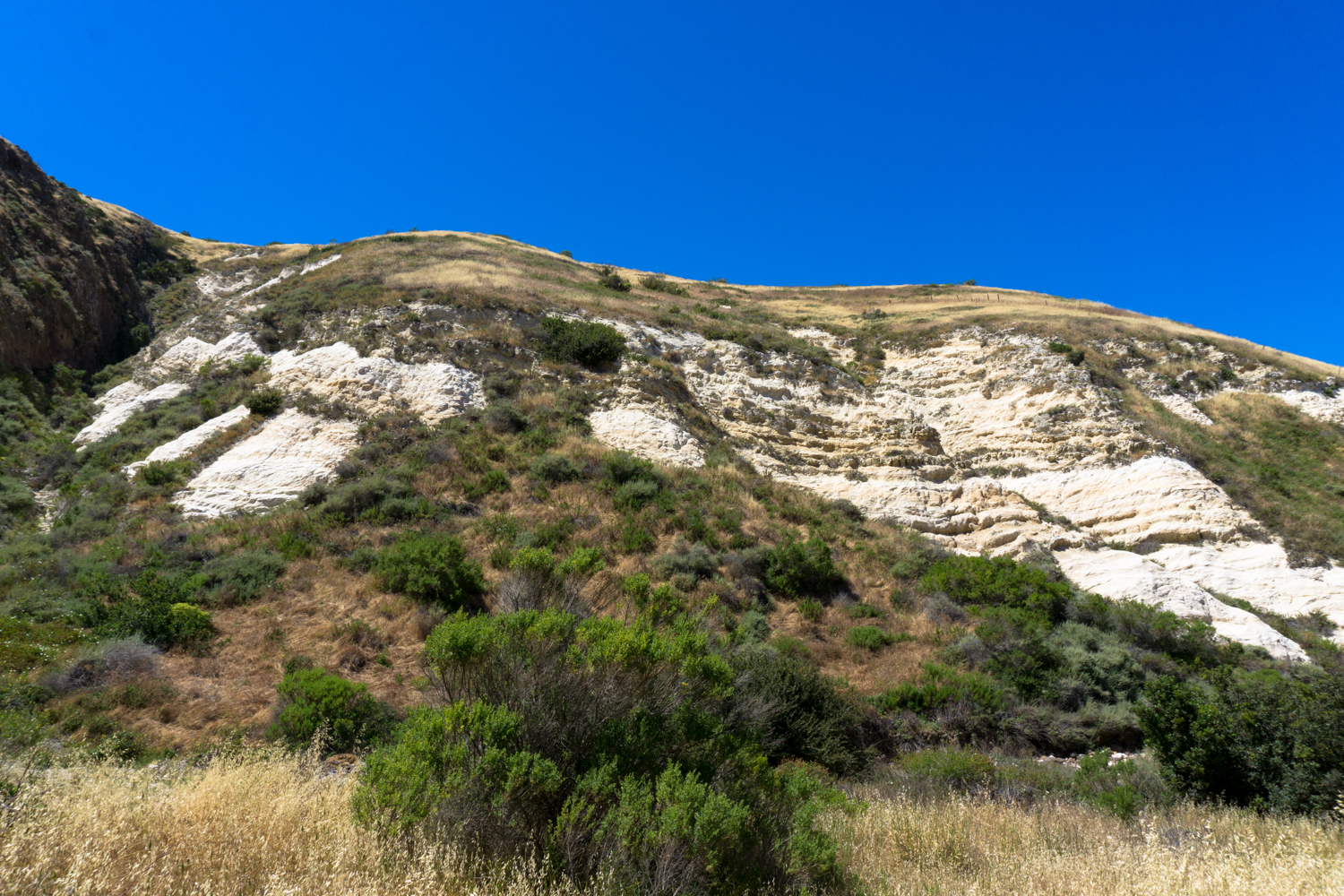 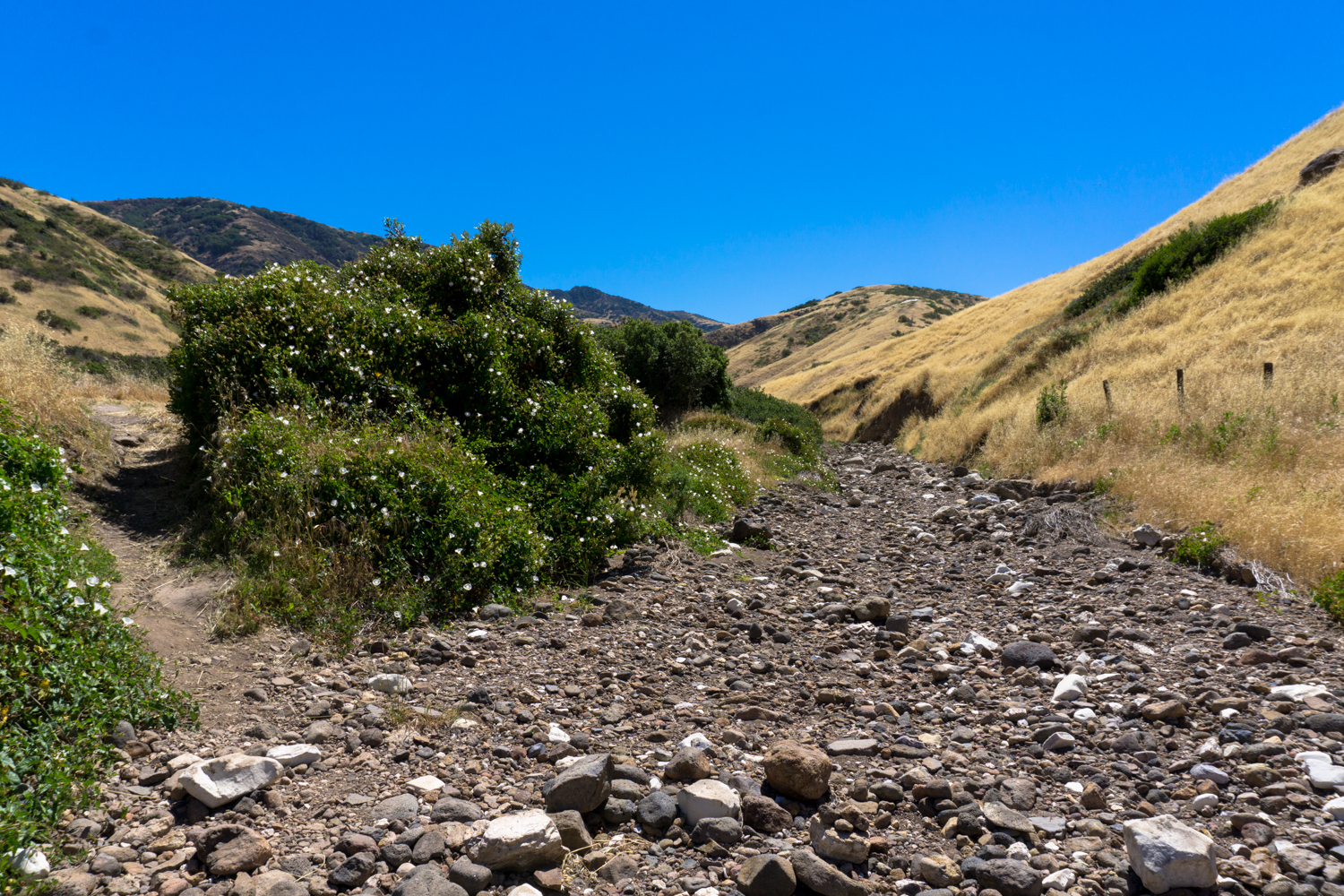 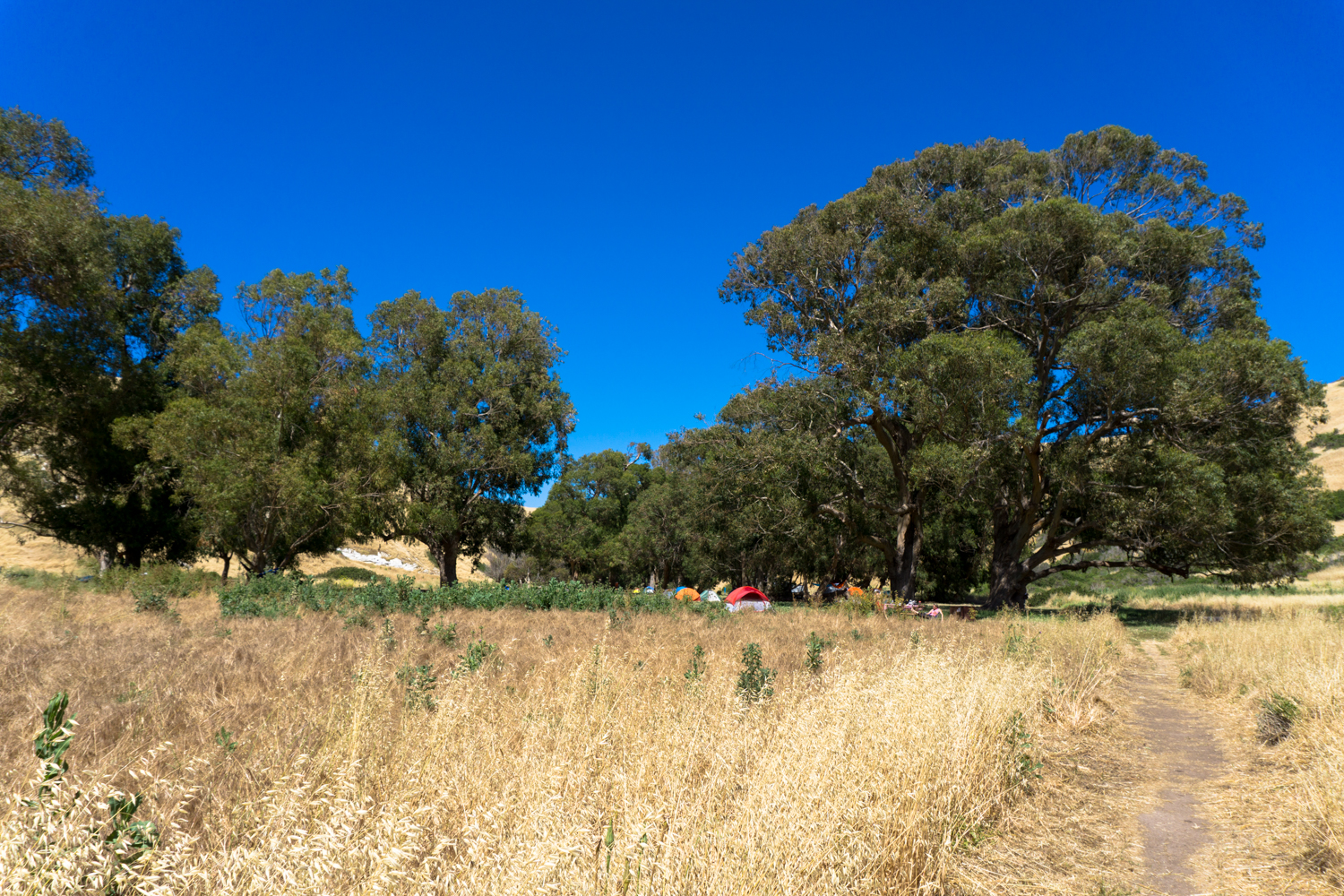 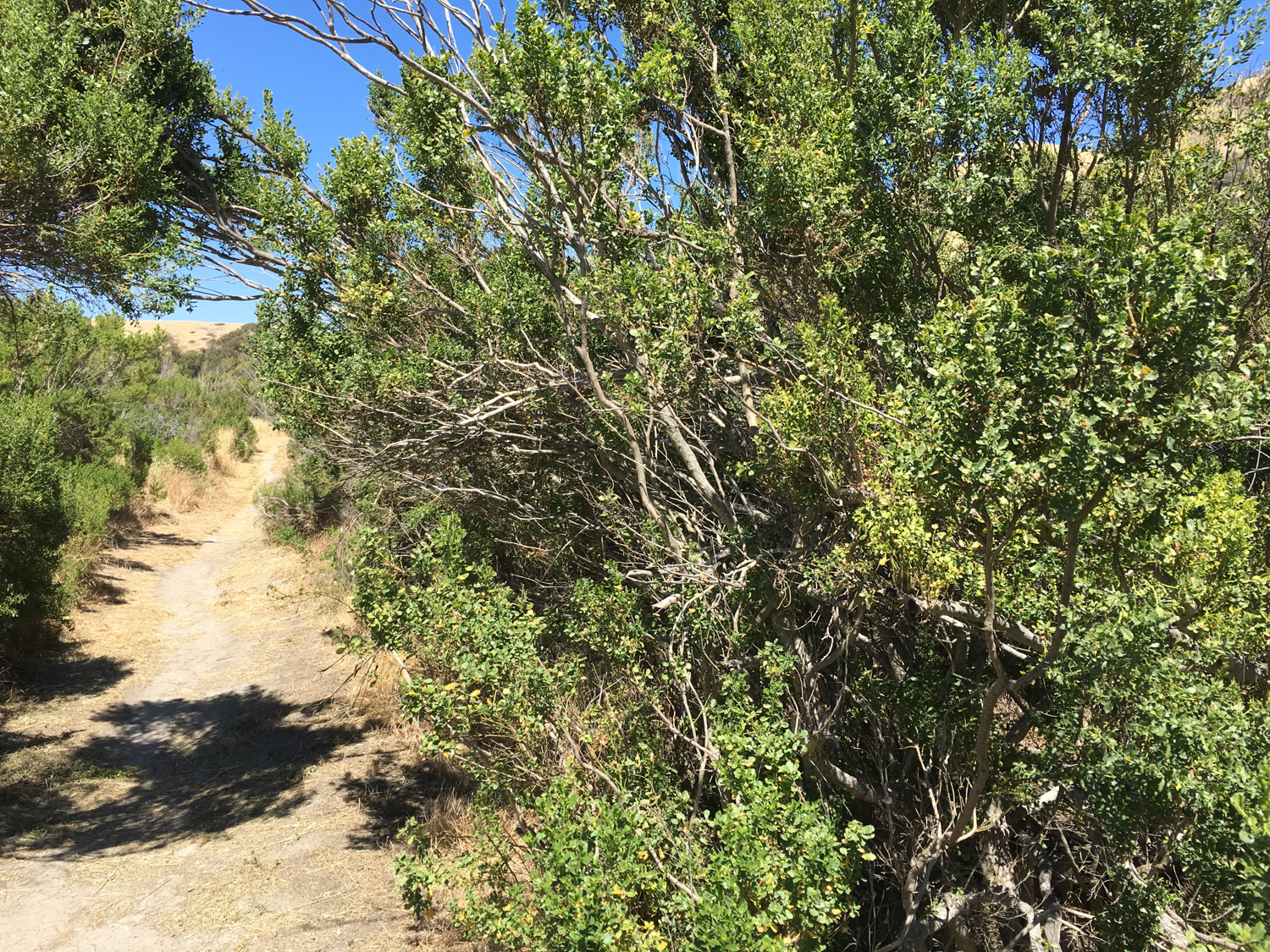 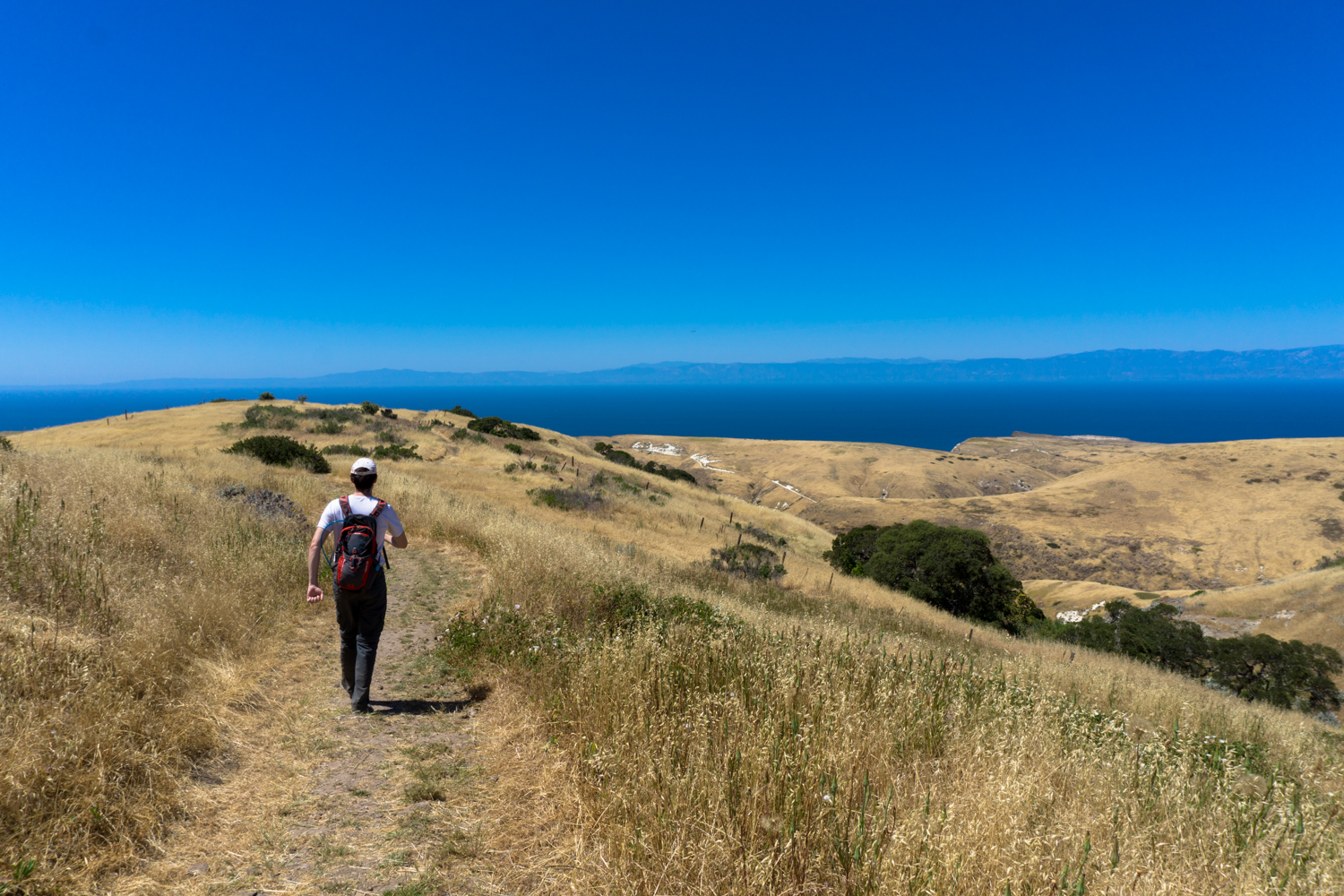 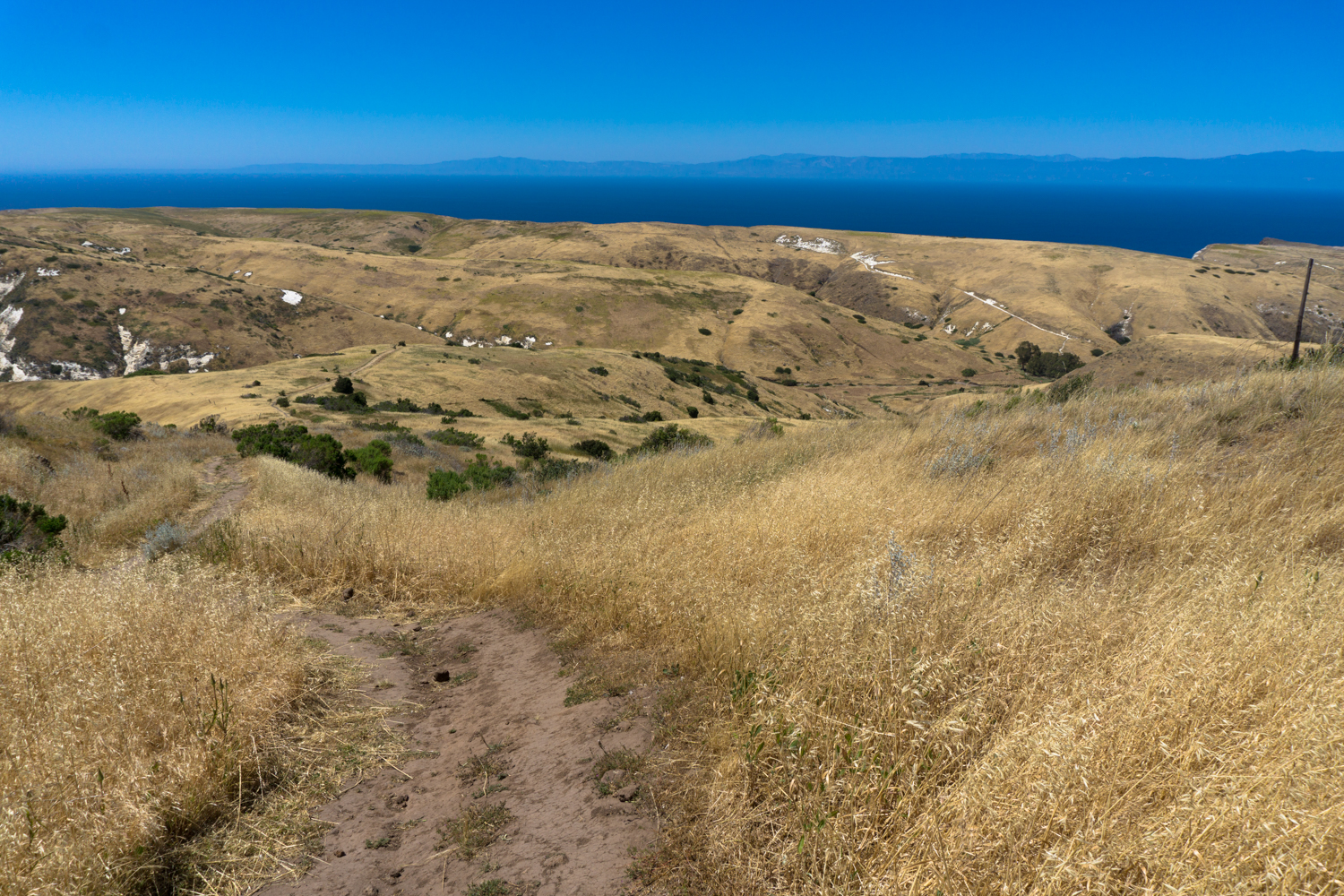 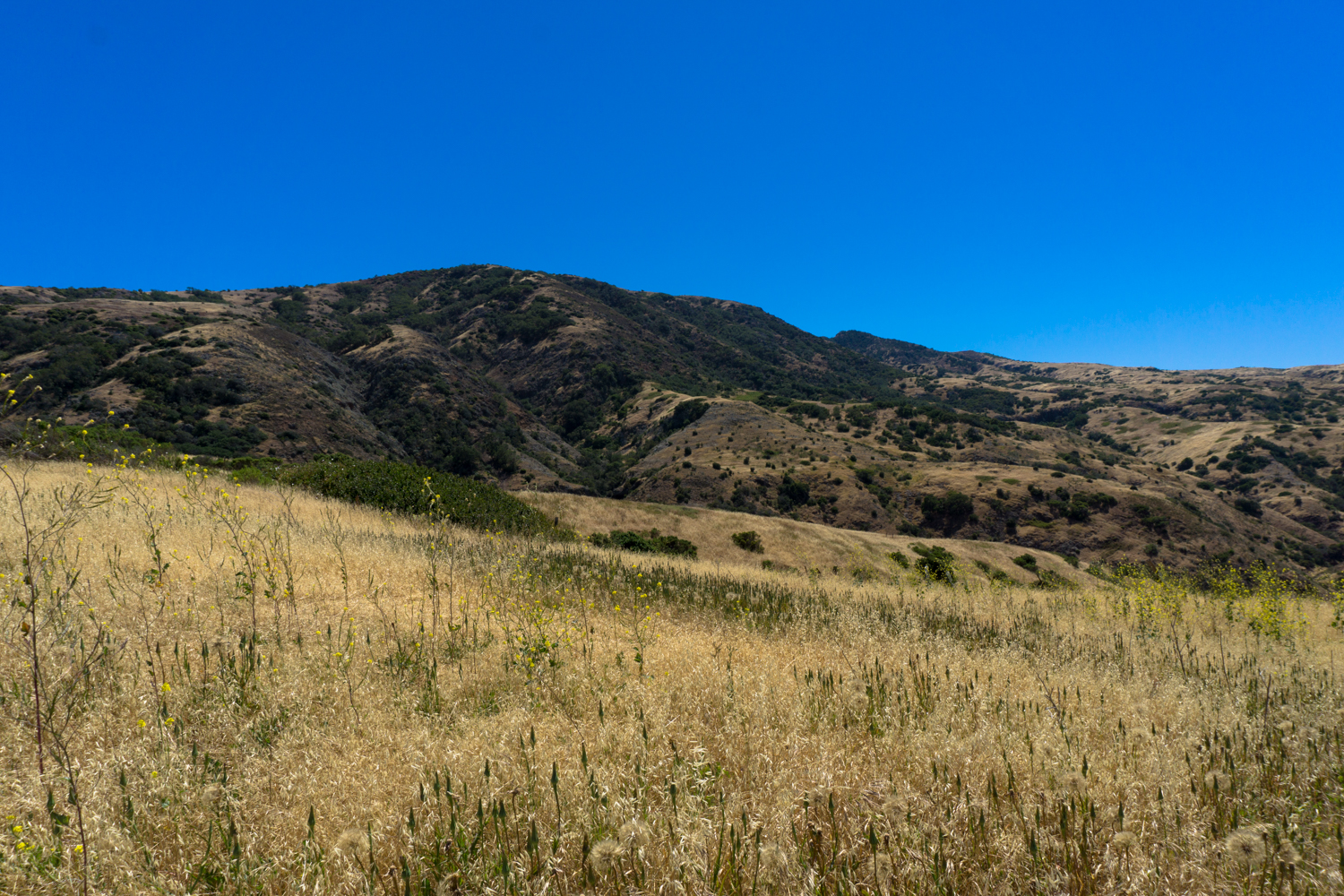 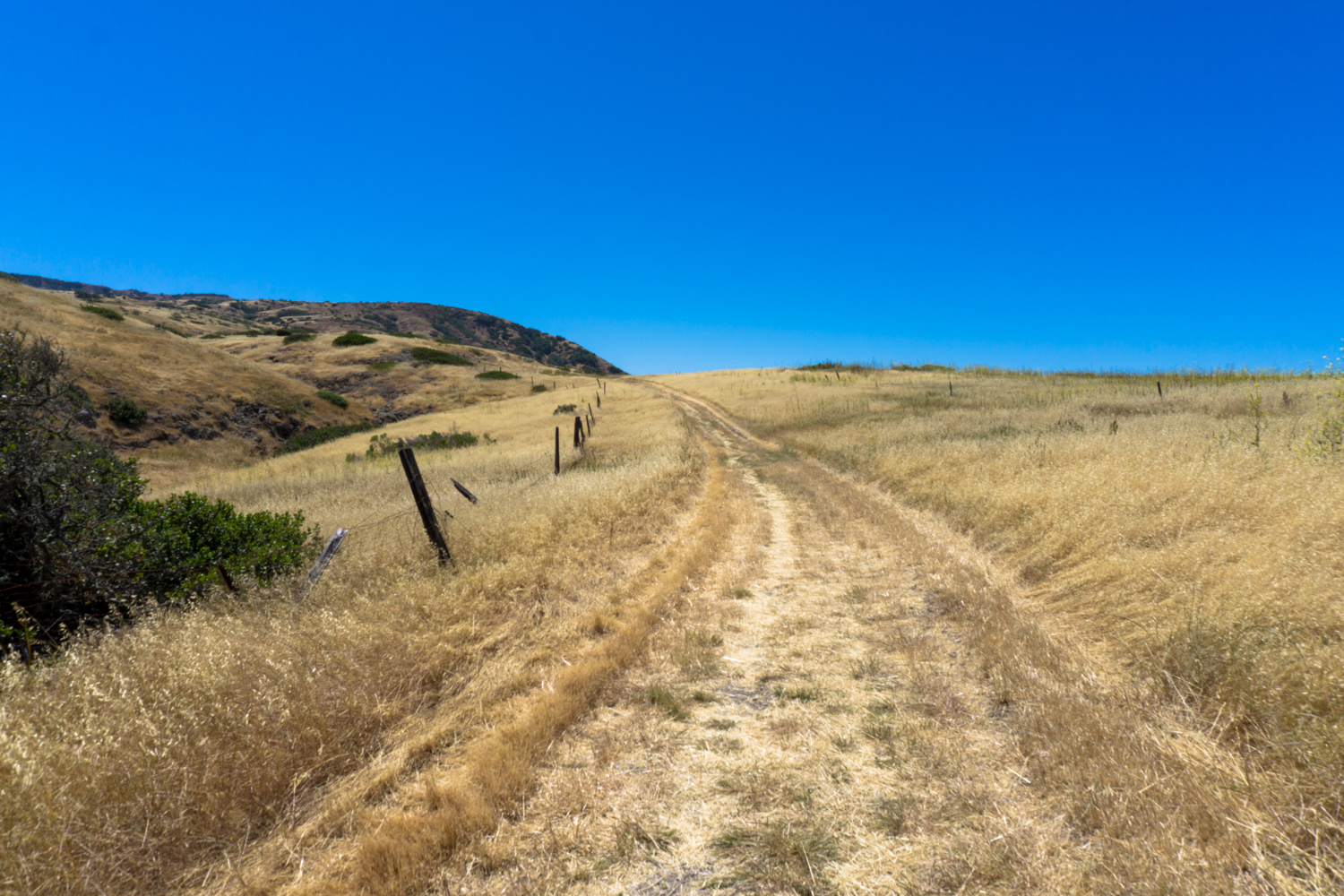 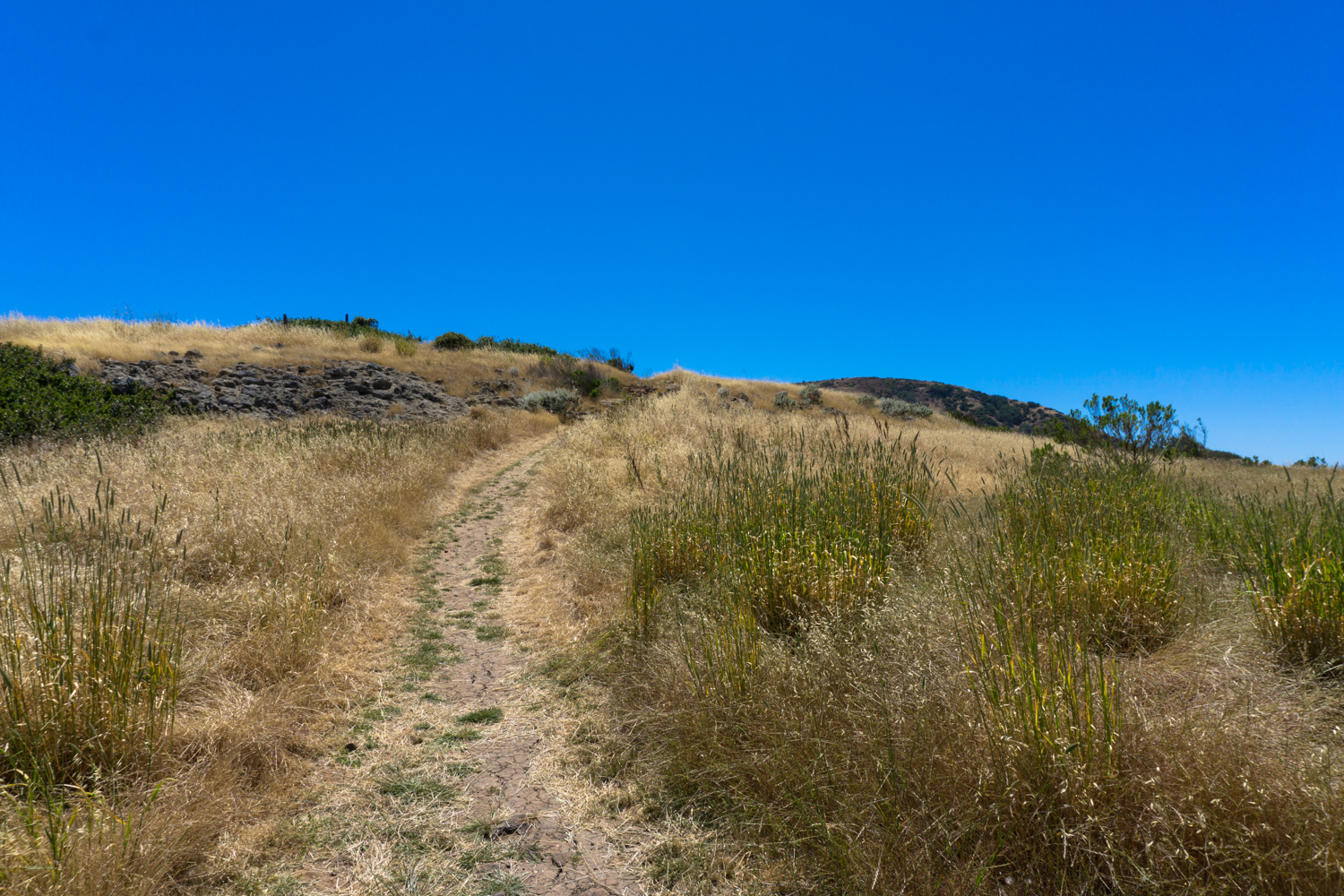 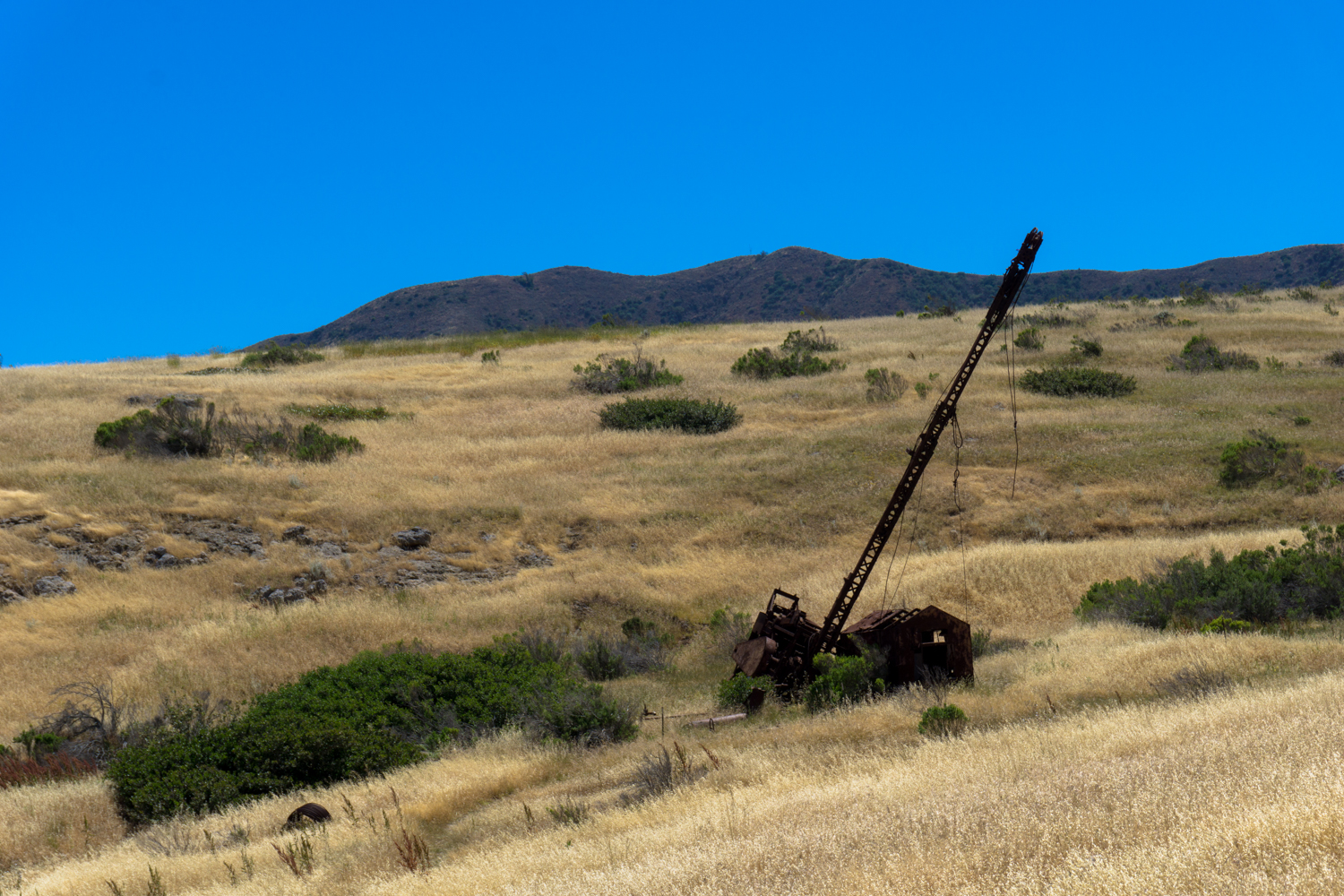 The first part of this route is on Smuggler's Road, a steep but relatively well-maintained former ranch road. The Scorpion Canyon Loop Trail is very steep, narrow, and rocky and you may need to exercise extra caution there. Trekking poles might come in handy, too.

Scorpion Ranch is the largest and most accessible campground in Channel Islands National Park. Campsites are reservable (highly recommended), and Scorpion Ranch has pit toilets and potable water. All trash must be packed out and campers must use fox-boxes to store food -- the Island foxes and ravens can open tents here.

Mainland visitors who don't have their own boats to take them to Scorpion Anchorage must use Island Packers in Ventura to ferry across the channel. From the landing, follow the short trail toward the campground and ranger station / visitor center.