“Wow,” my hiking partner gasped as we meandered our way around the narrow switchbacks leading to Rosalie Lake, “I wish we were camping here tonight.” I could relate.

Rosalie is a small and often overlooked alpine lake stuck right on the edge of the John Muir Trail in the gorgeous Ansel Adams Wilderness. It took both my partner and I by surprise with its pristine, azure water and its shady, secluded campsites, complete with established fire rings. Next time we want to avoid the crowds of Shadow Lake, Rosalie will be on the top of our list. 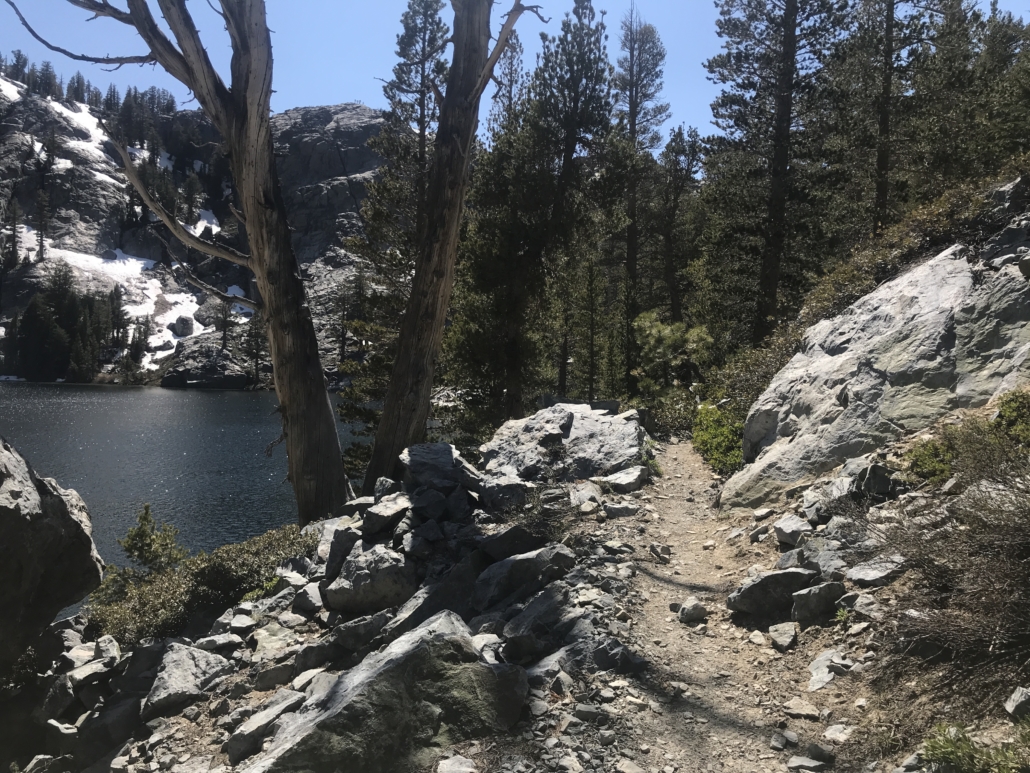 This lake is a perfect stopover for night two if you’re opting to hike the Minaret Lakes Loop going clockwise. It’s also a worthy day hike of its own accord, with options to extend the trip into a 12.5-mile affair, combining it with the Shadow Creek Trail before ending at the Agnew Meadows shuttle stop and making your way back to the car. In the Ansel Adams Wilderness, you really can’t go wrong (just remember that the last shuttle leaves at 7pm!).

Plan ahead if you want to do this as an overnight. Wilderness permits can be tricky to get in this area, so apply early via Recreation.gov (permit quota May 1st – November 1st). Remember – California Campfire Permits (free after passing a brief test) are required if you plan on having a fire. Those interested in fishing should be sure to get a permit – Rosalie and Shadow Lakes are known for their Brook Trout and Rainbow Trout. It’s also a good idea to come prepared with bug spray if you’re hiking during summer months. The mosquitoes can be quite gnarly in this area!

Most trekkers will begin their day at the Mammoth Lakes Visitor Center to pick up an overnight permit. From here, continue on to the Mammoth Adventure Center, parking as close as you can along the road. If you arrive before 7AM or after 7PM, you can continue the drive down to Devils Postpile and park in the adjacent lot. Everyone else must purchase a shuttle pass (runs from 7am-7pm) at the Adventure Center. At the time of writing, the passes cost $8 for Adults, $4 for children aged 3-15, and are free for children 2 and under. There’s a queue for shuttles right in front of the Adventure Center, near the playground. 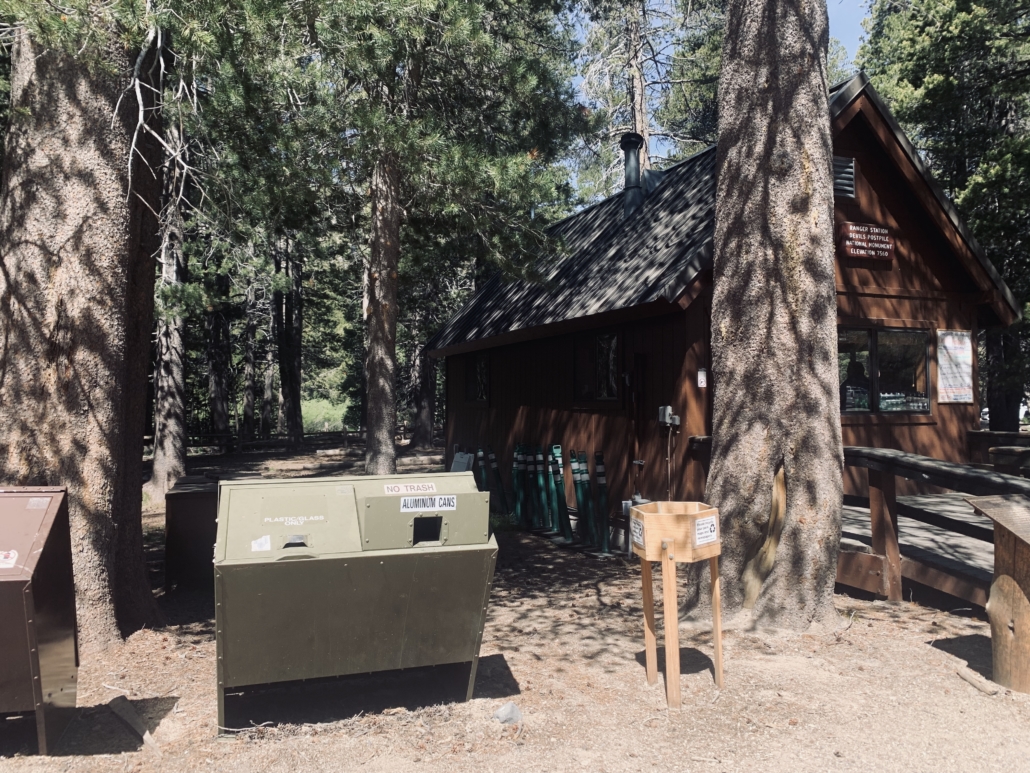 The Ranger Station at Devils Postpile often gives informative lectures and nature walks. Check the day’s schedule when you arrive.

After you pick up your permit and hop aboard a shuttle, you can relax! The bureaucracy of the day is done, and the wilderness awaits you with open arms. Gaze out at the stunning views of the Minaret Range and Starkweather Lake while the shuttle winds its way towards Devils Postpile for 20-30 minutes.

Jump off the shuttle at the Devils Postpile stop. If you’re lucky, you might catch one of the many ranger orientations featuring information about the volcanic activity that helped shape this valley, millions of years ago. If you’re itching to add a trek to Devils Postpile onto this hike, simply follow the first leg of the trail an extra .3 miles south to marvel at this geological masterpiece.

From the shuttle stop, hikers will head south along the gently graded trail toward a large bridge that spans the Middle Fork of the San Joaquin River. Cross the bridge, turn right, and head north for half a mile, beginning your climb up and out of the valley itself. You’ll hit a junction where the JMT and the PCT split. Keep left at this junction to stay on the JMT. 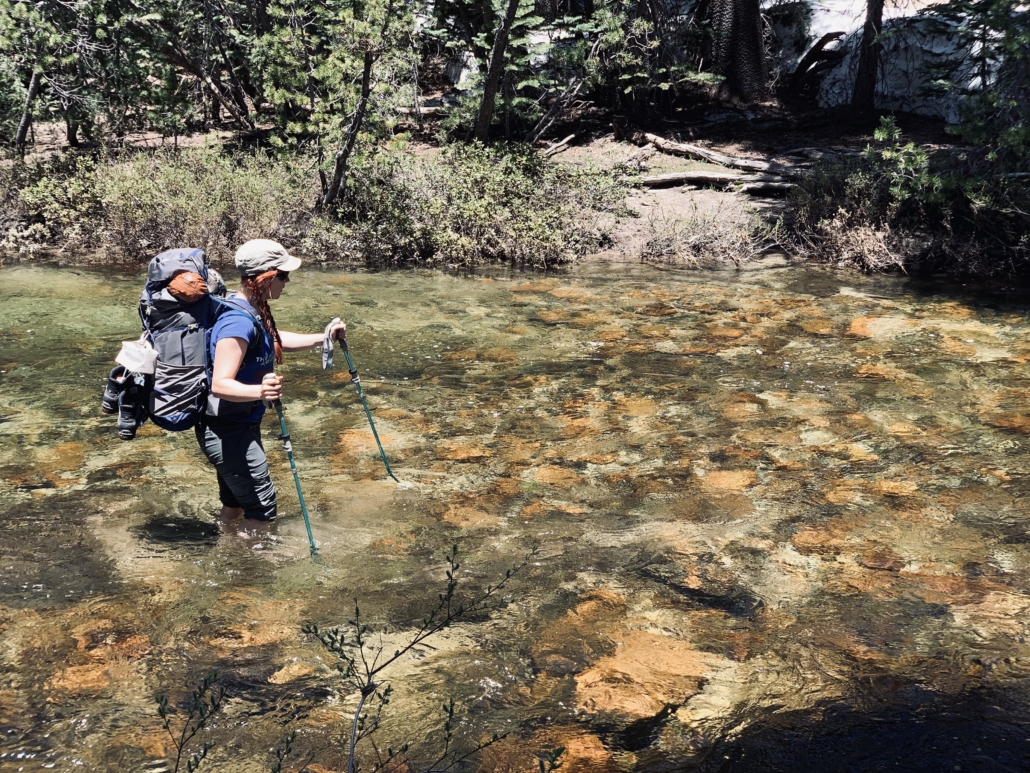 Testing our ability to endure the frigid snowmelt.

Hikers will soon be tasked with crossing a frigid creek, plump with snowmelt. If you’re hiking in the early part of the season — or if you’re just not comfortable with a crossing here — head slightly west of the trail for a wider, gentler stream crossing. Bring trekking poles and water shoes if you have them and get ready for a wake-up call that’s stronger than any coffee! Once you’ve safely crossed Minaret Creek, continue along the trail for 0.5 mile, passing the lovely (but often mosquito-filled) Johnston Lake. This is a great spot for a snack break before the next junction. 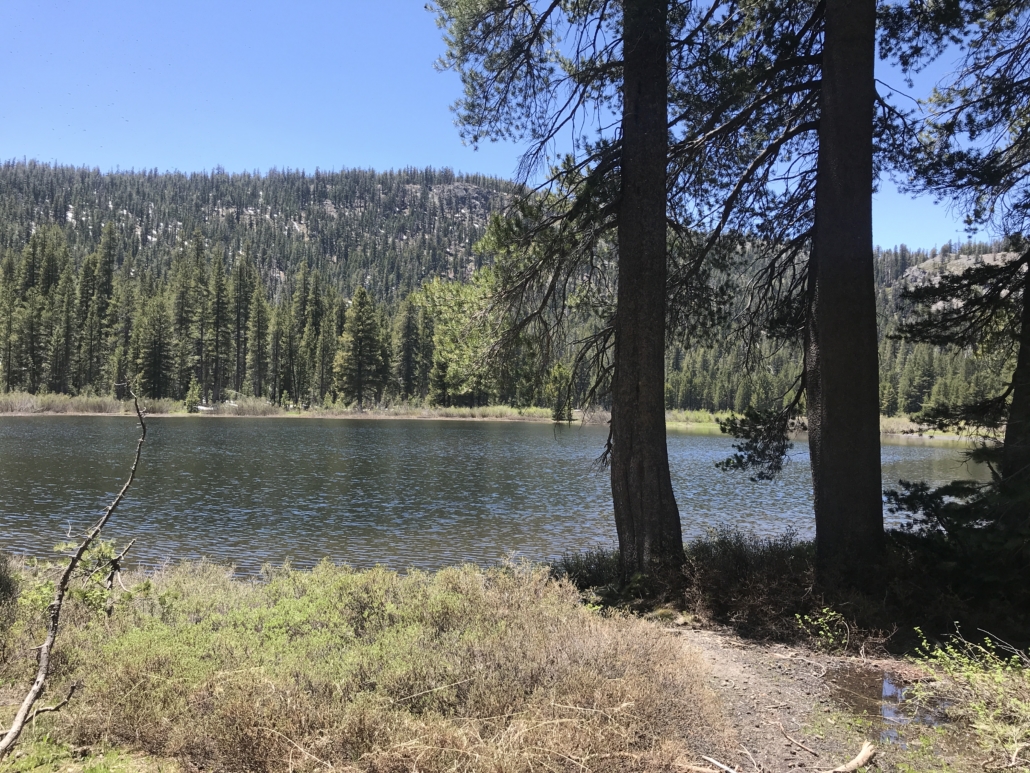 Johnston Lake is the first of many.

From here, the trail splits, with the left side climbing up to Minaret Lake, and the right side continuing along the JMT heading north. Take the right fork in the trail and get ready to climb up, up, and up for the next few miles. This section of the trail is wooded and shady, with fragrant firs and ponderosa pines littering the mountainside in every direction. In a forest this green and dense, I kept thinking I should be on the lookout for pixies and elves! 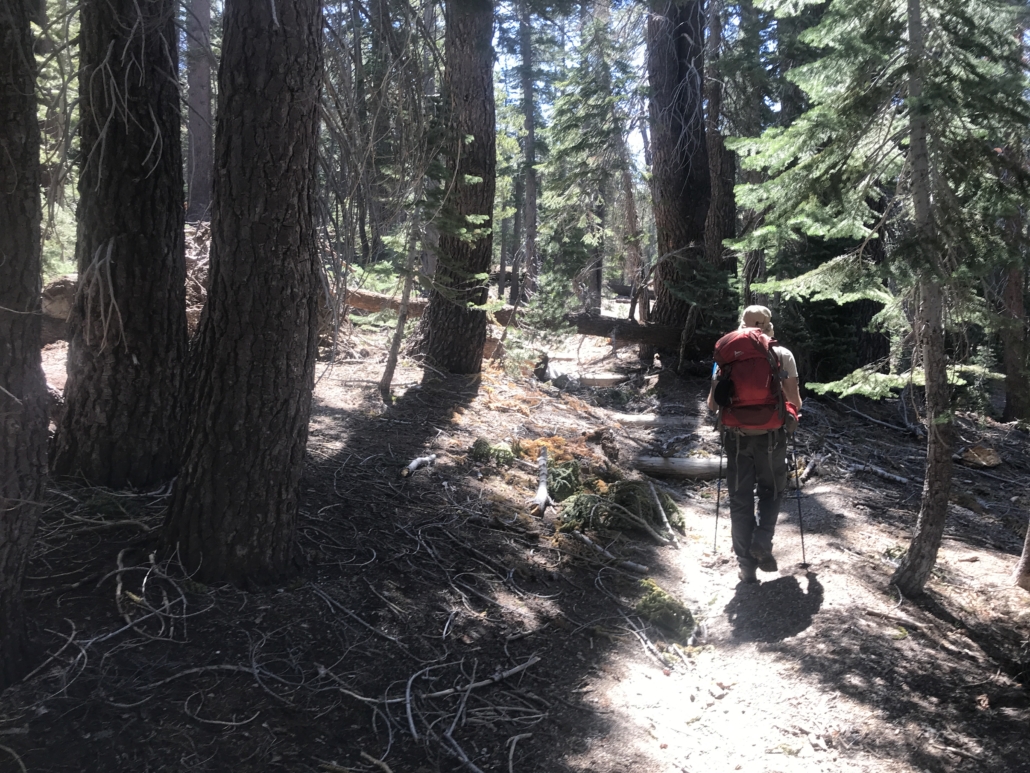 Climbing through a dense forest along the JMT.

As you near the end of your fifth mile, be on the lookout for Trinity Lakes on the right side of the trail. This cluster of swimming pool sized lakes is where my partner and I opted to stop for lunch and a much-needed dip in the cool water. After climbing at altitude for 3 miles, we’d earned it. There are a few scattered campsites along the shores of these tiny lakes, though they boast no views and are not popular destinations for JMT hikers. 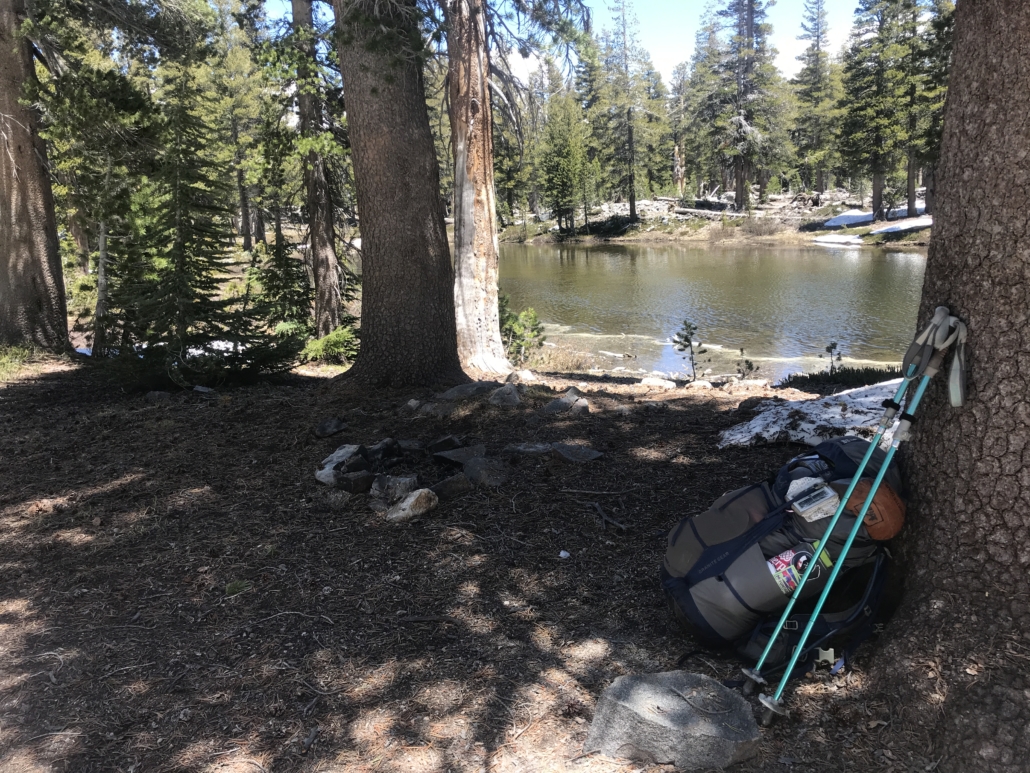 An example of the campsites found at Trinity Lakes.

From here, the trail gets steeper and rockier, edging its way toward 9,700 feet. Take your time in the thin air and try to enjoy the changing scenery as you slowly put one foot in front of the other. At the trail’s crest, lucky hikers will catch a glimpse of higher, snow-capped peaks to the north before dipping back down into the forest for one final descent to Rosalie Lake itself. 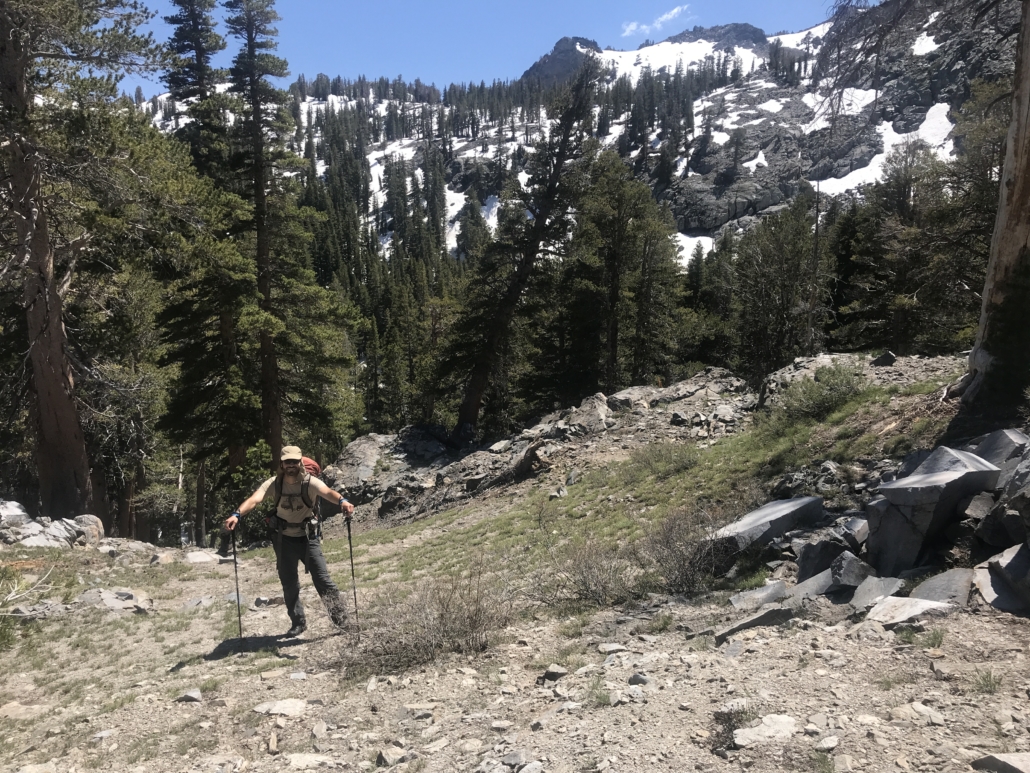 The final stretch of trail is where the scenery takes a sharp turn toward alpine. Rocky crags surround hikers on all sides.

This last section can be steep with lingering patches of snow hanging around into July, depending on the year. Pick your way through the woods carefully, using the lapis beacon of Rosalie Lake as your guide. Aim for the east (right) side of the lake as you descend, keeping an eye out for some epic campsites as you near the lake’s shore.

Cast a line, take a dip, or simply relax and watch as the sun sets beyond the craggy edges of Rosalie Lake. The view is to die for, and if you’re lucky enough to nab an overnight permit, you’re likely to have it all to yourself. 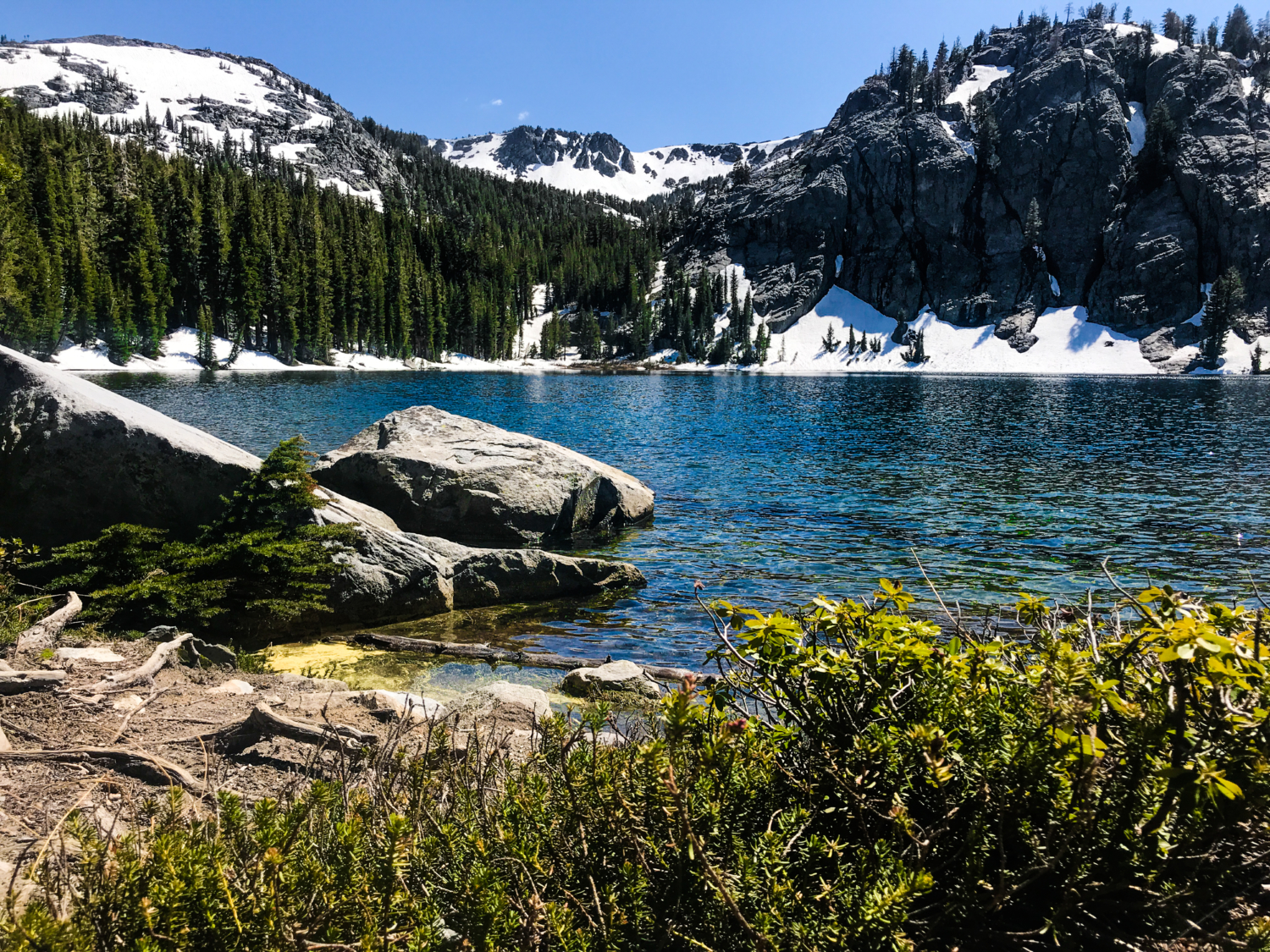 After a full day of passing alpine lakes, Rosalie is clearly the loveliest of the bunch!

Whenever you’re ready, either turn back the way you came and take the shuttle up the hill from Devils Postpile or consider tacking on Shadow Lake and the Shadow Creek Trail for a scenic, 12.5-mile loop that ends at the Agnew Meadows shuttle stop.

No matter which trail you choose, there’s no denying that Rosalie Lake is one of those truly rare Sierra gems – a picturesque, sapphire dot free from the usual crowds.

I'm a Los Angeles-based writer and outdoor addict with a passion for inclusivity, vulnerability, badass women, dancing, daydreaming, and sleeping in the dirt. 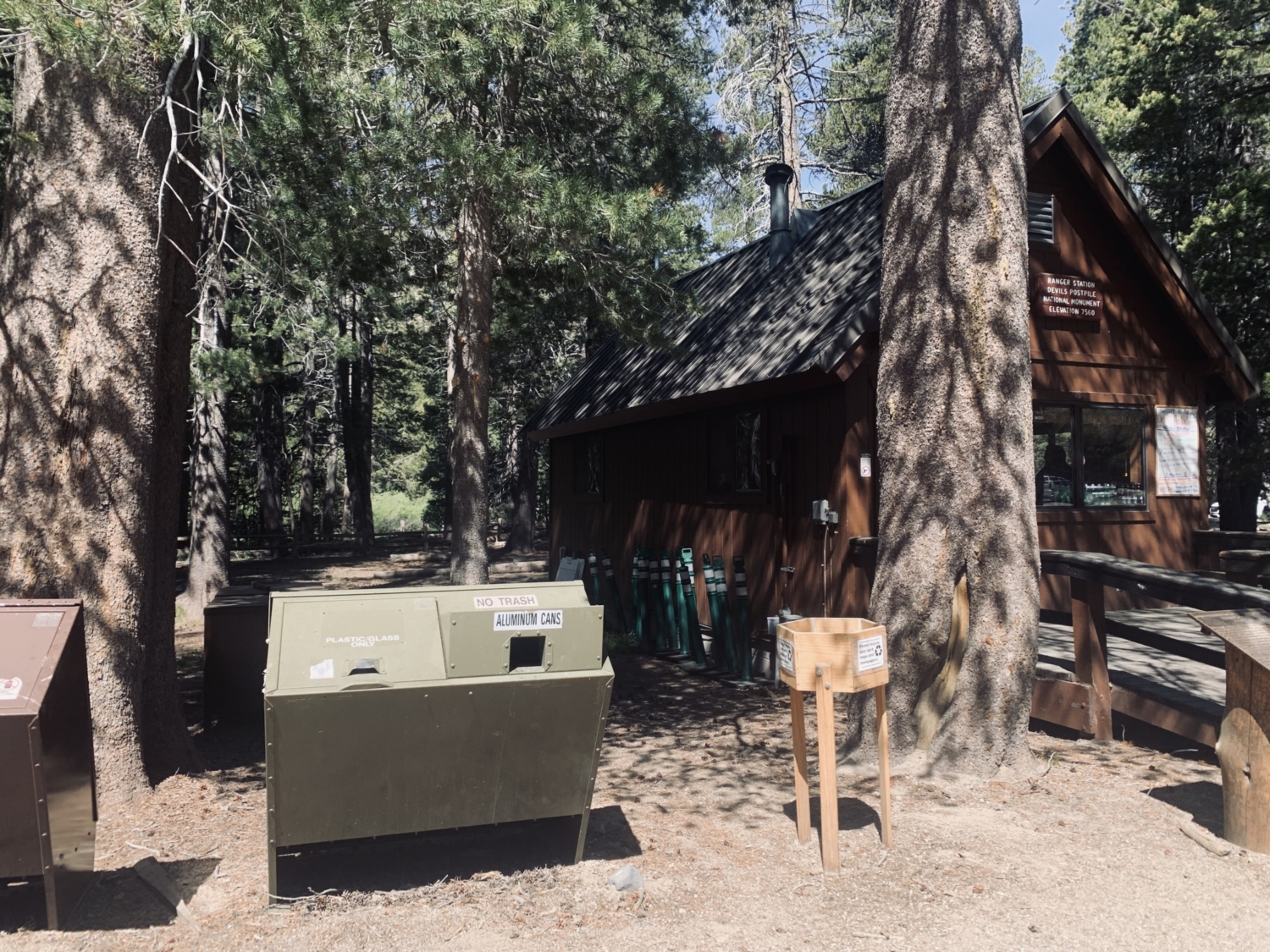 The Ranger Station at Devils Postpile often gives informative lectures and nature walks. Check the day’s schedule when you arrive. 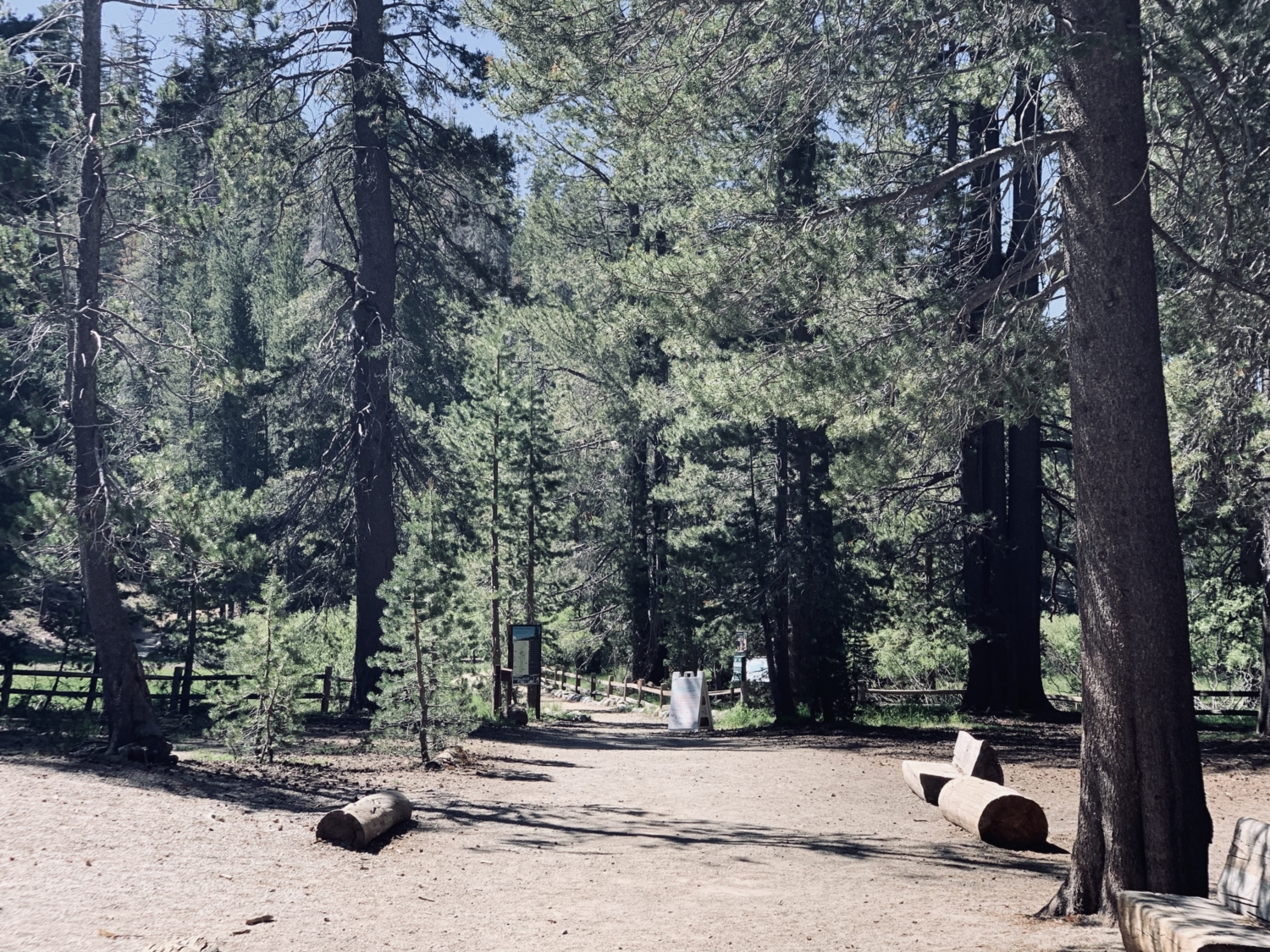 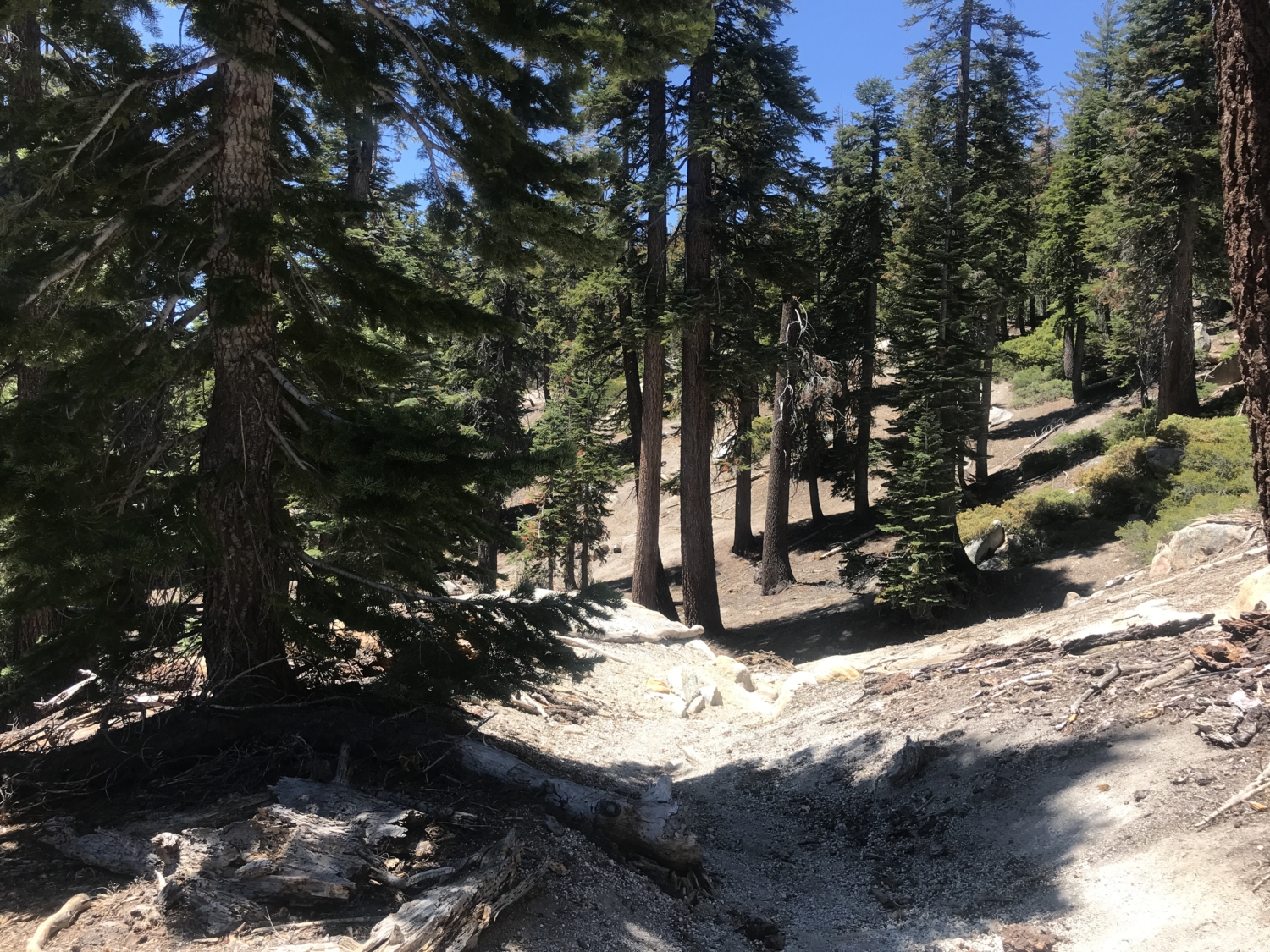 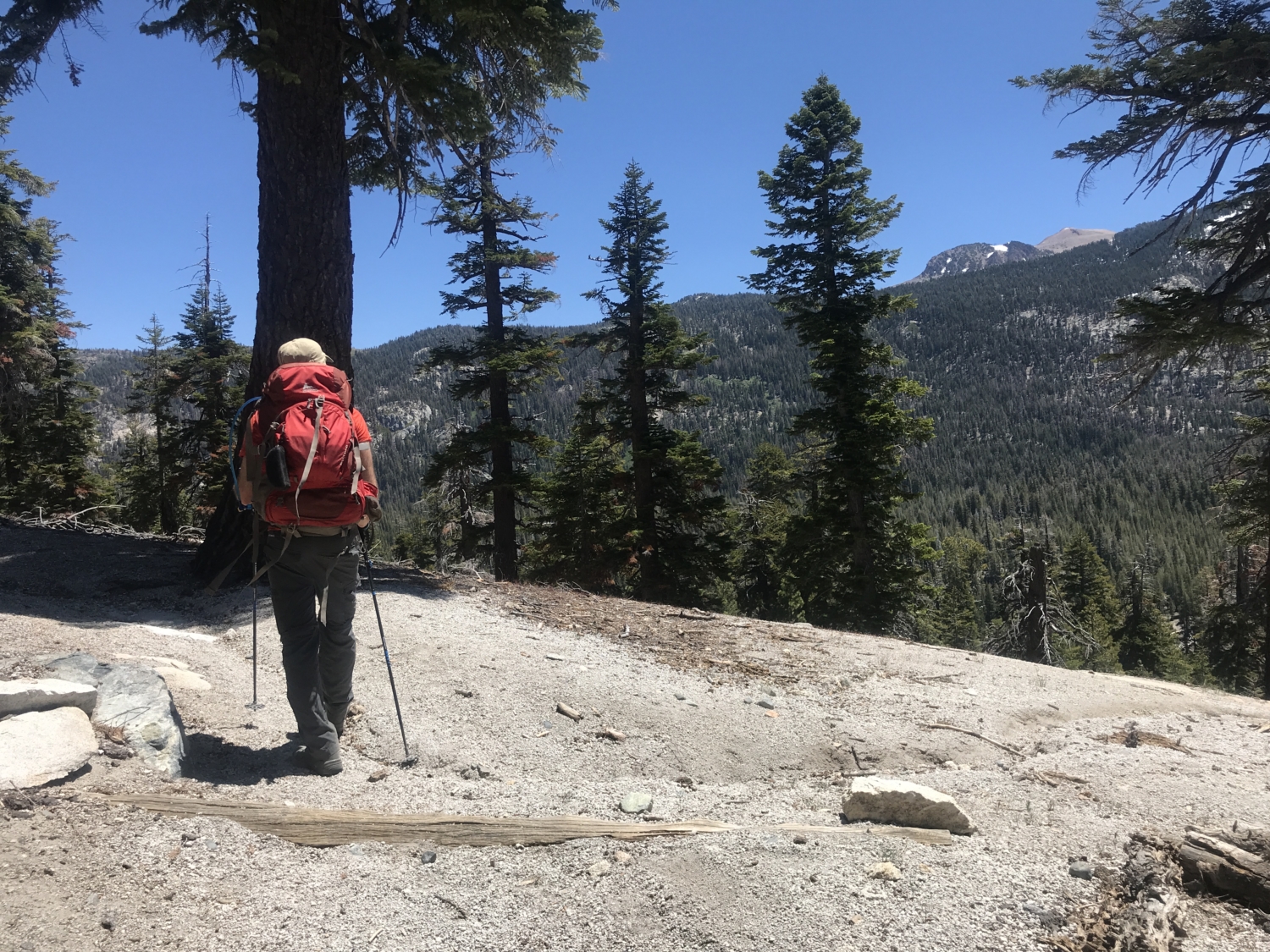 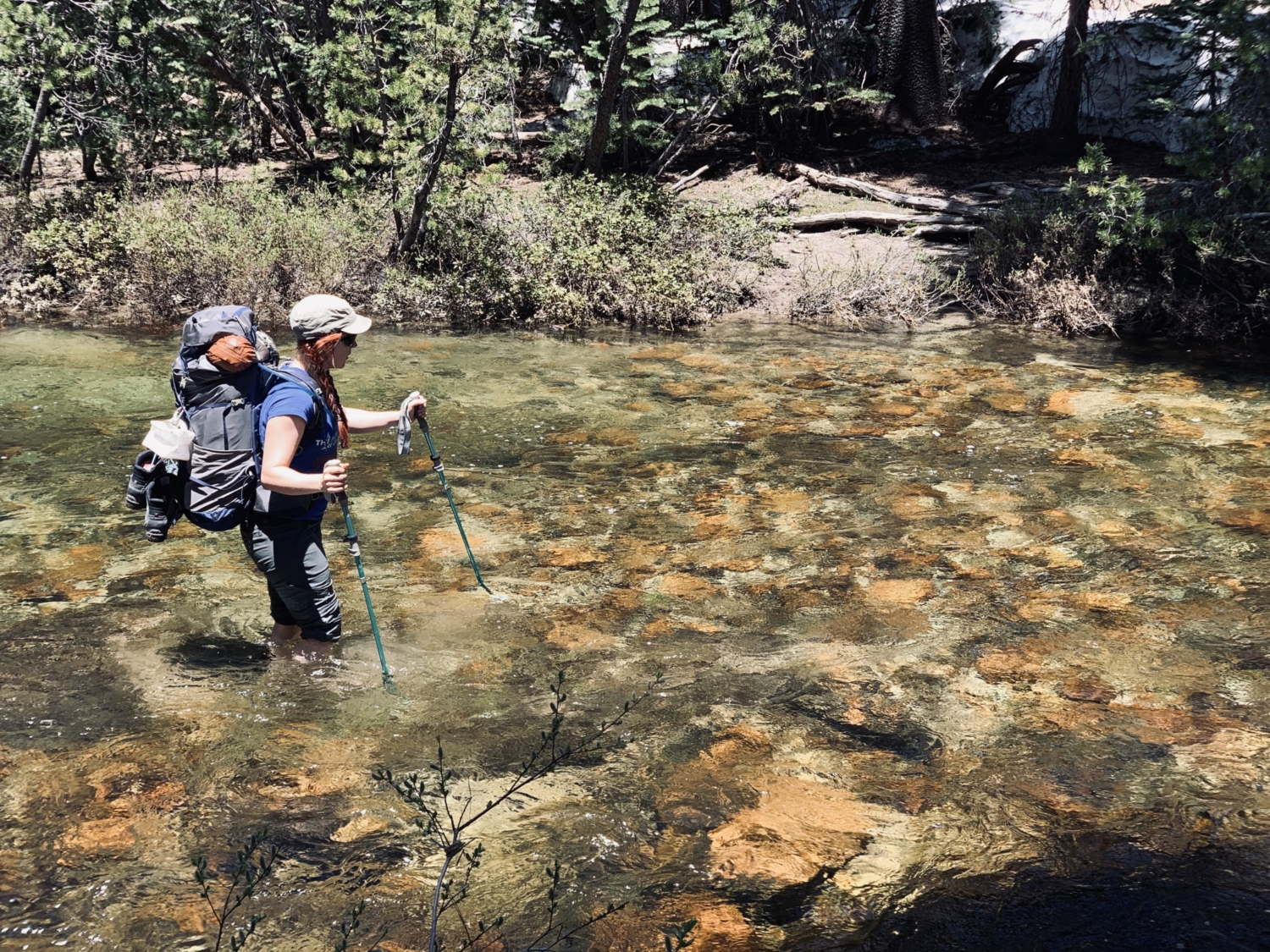 Testing our ability to endure the frigid snowmelt. 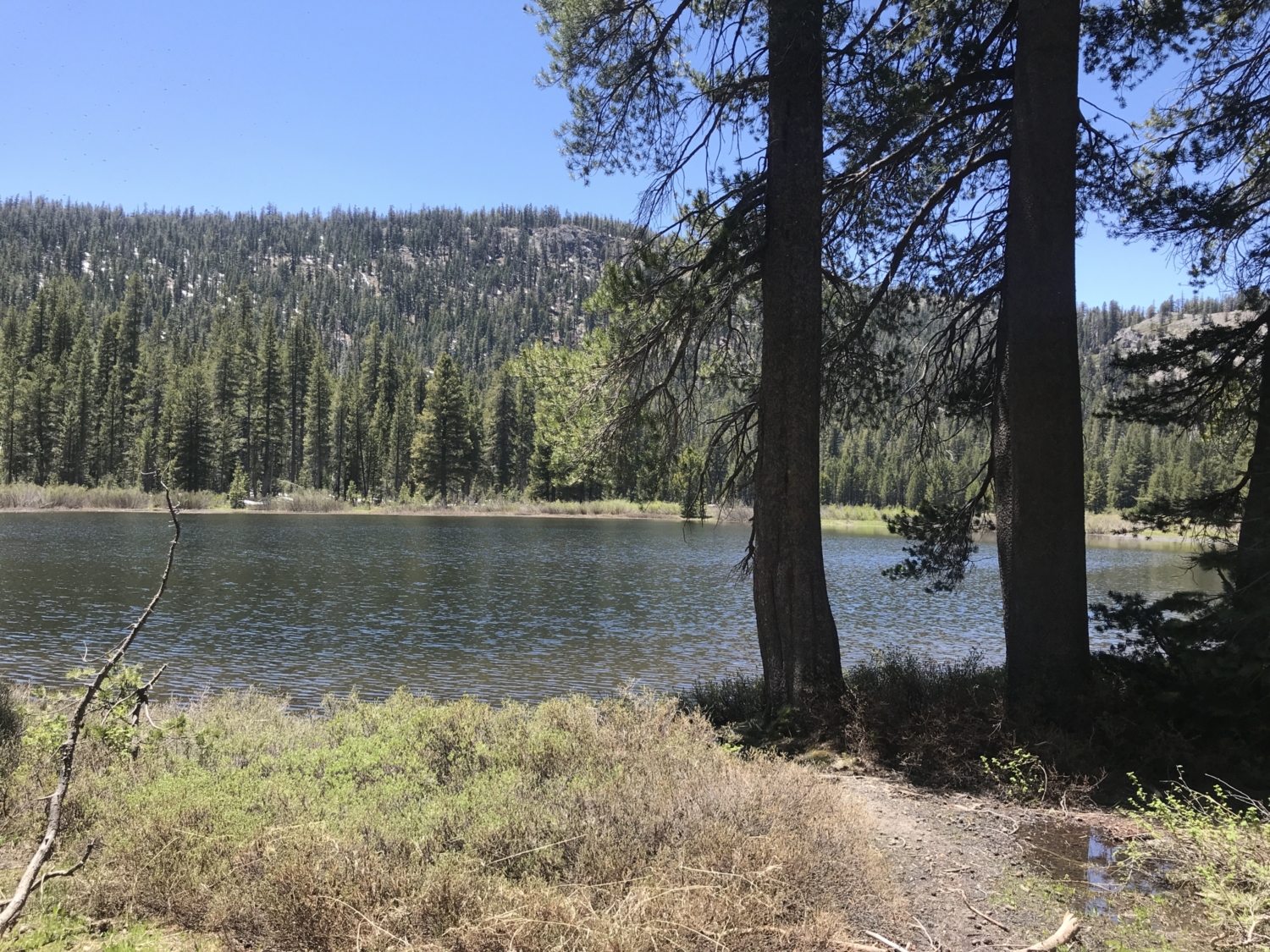 Johnson Lake is the first of many. 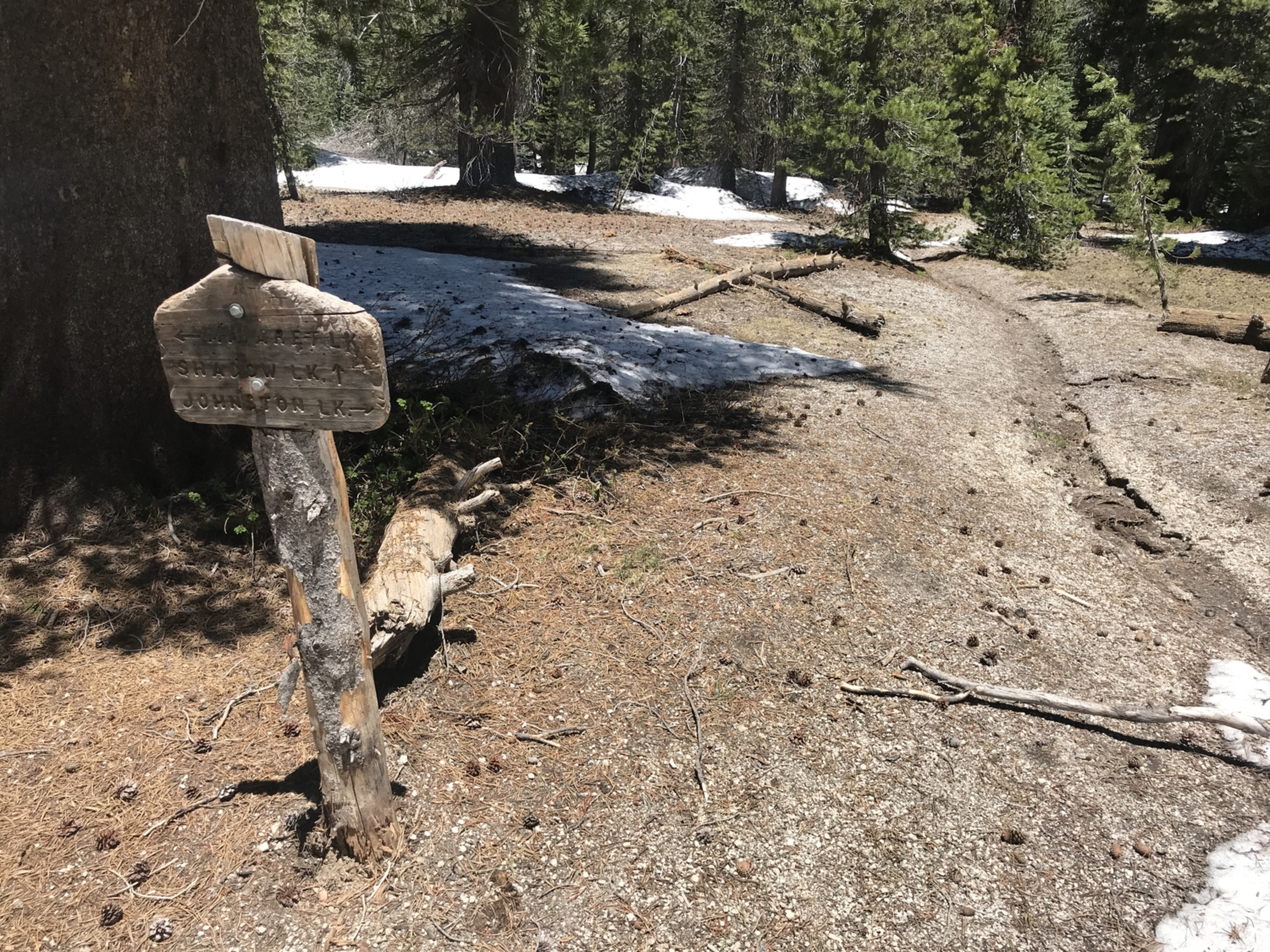 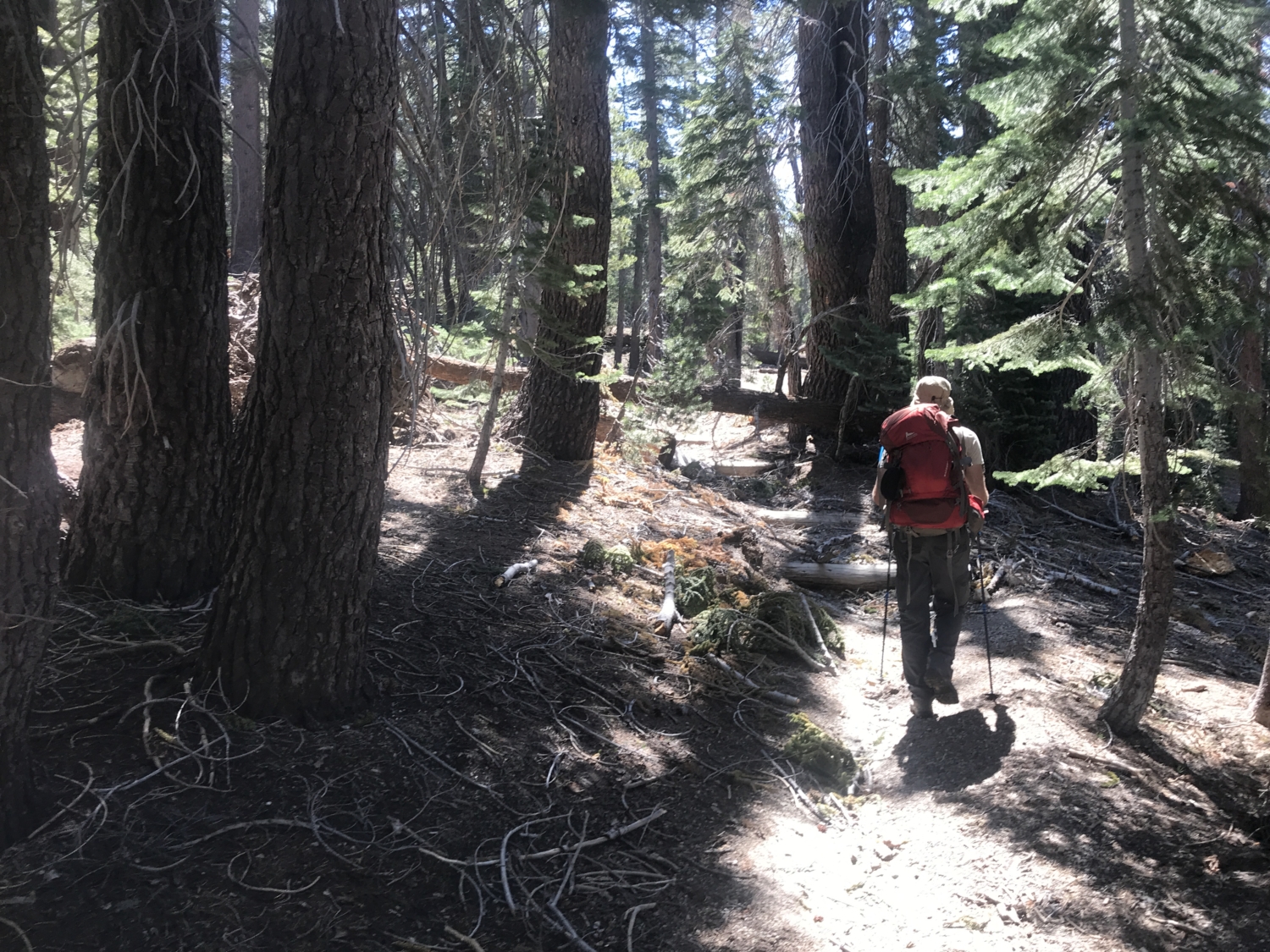 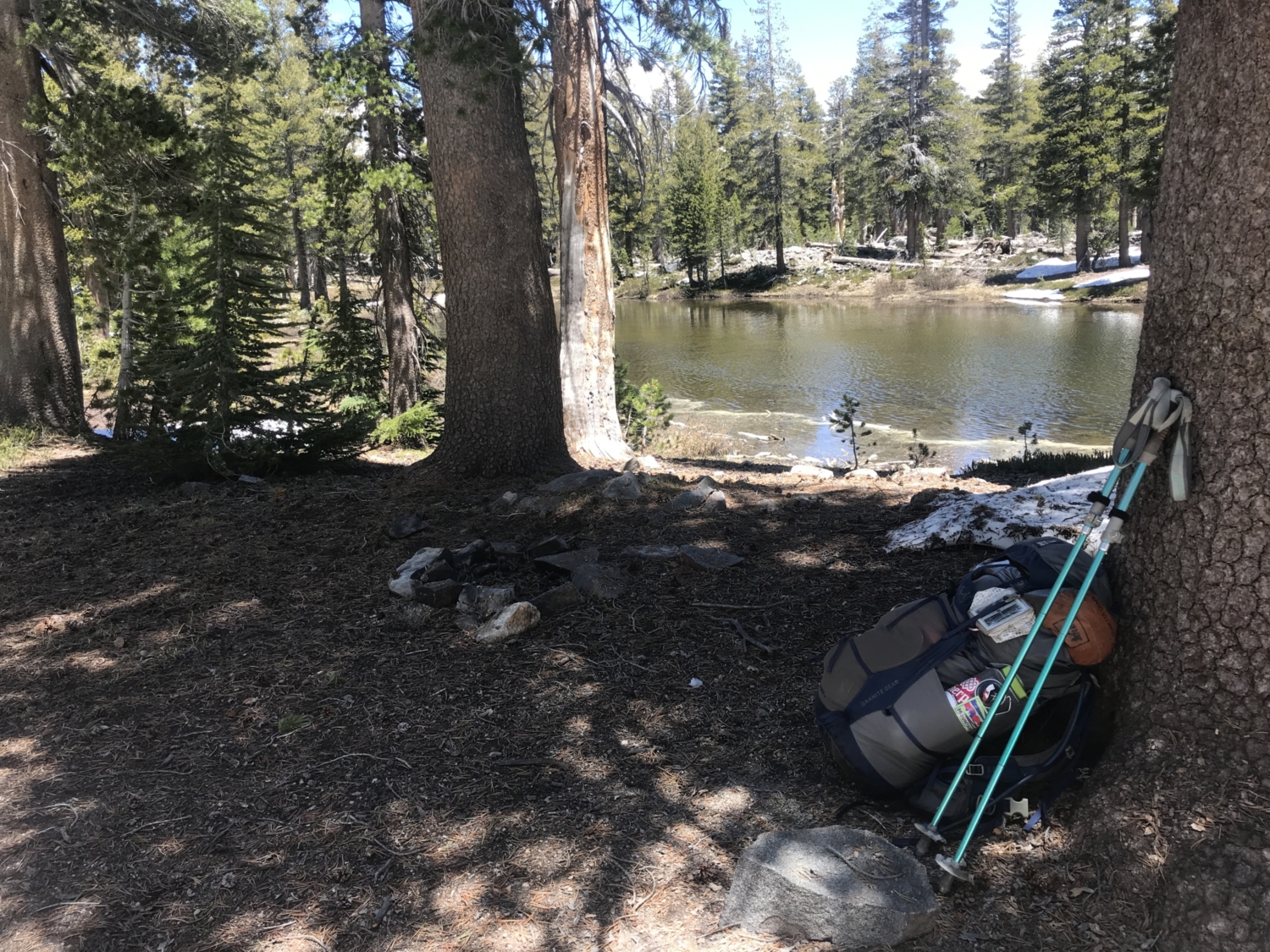 An example of the campsites found at Trinity Lakes. 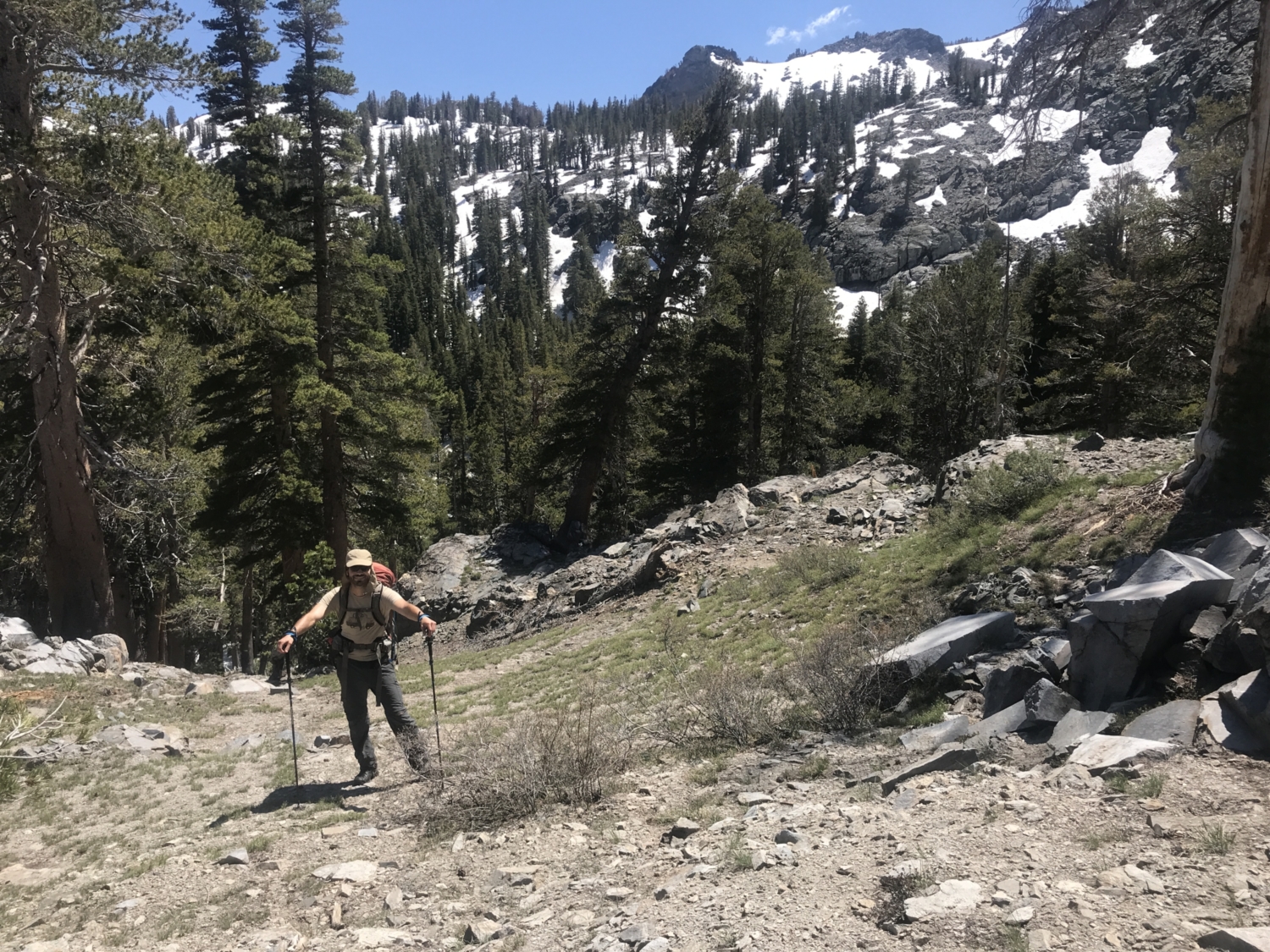 The final stretch of trail is where the scenery takes a sharp turn toward alpine. Rocky crags surround hikers on all sides. 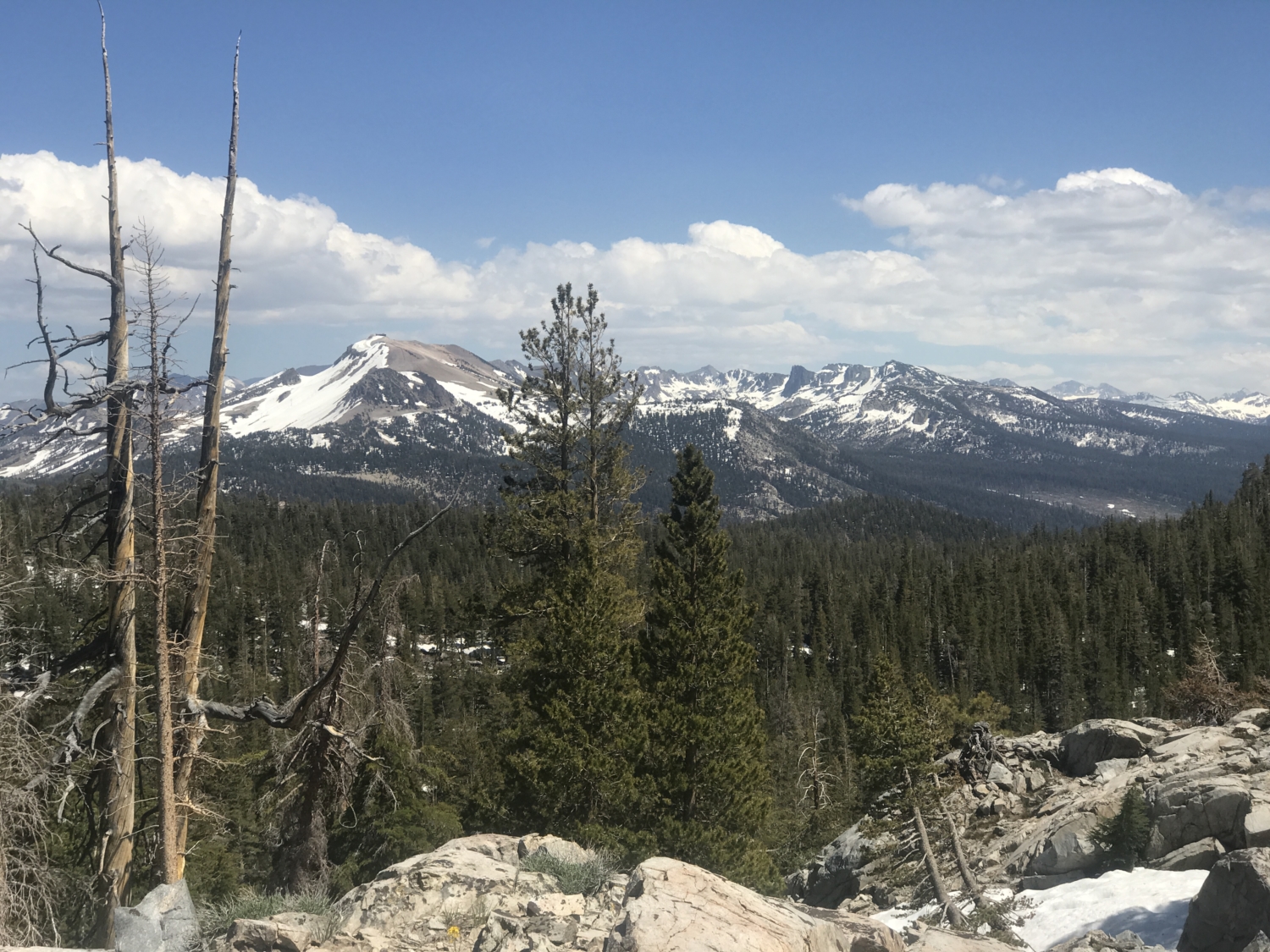 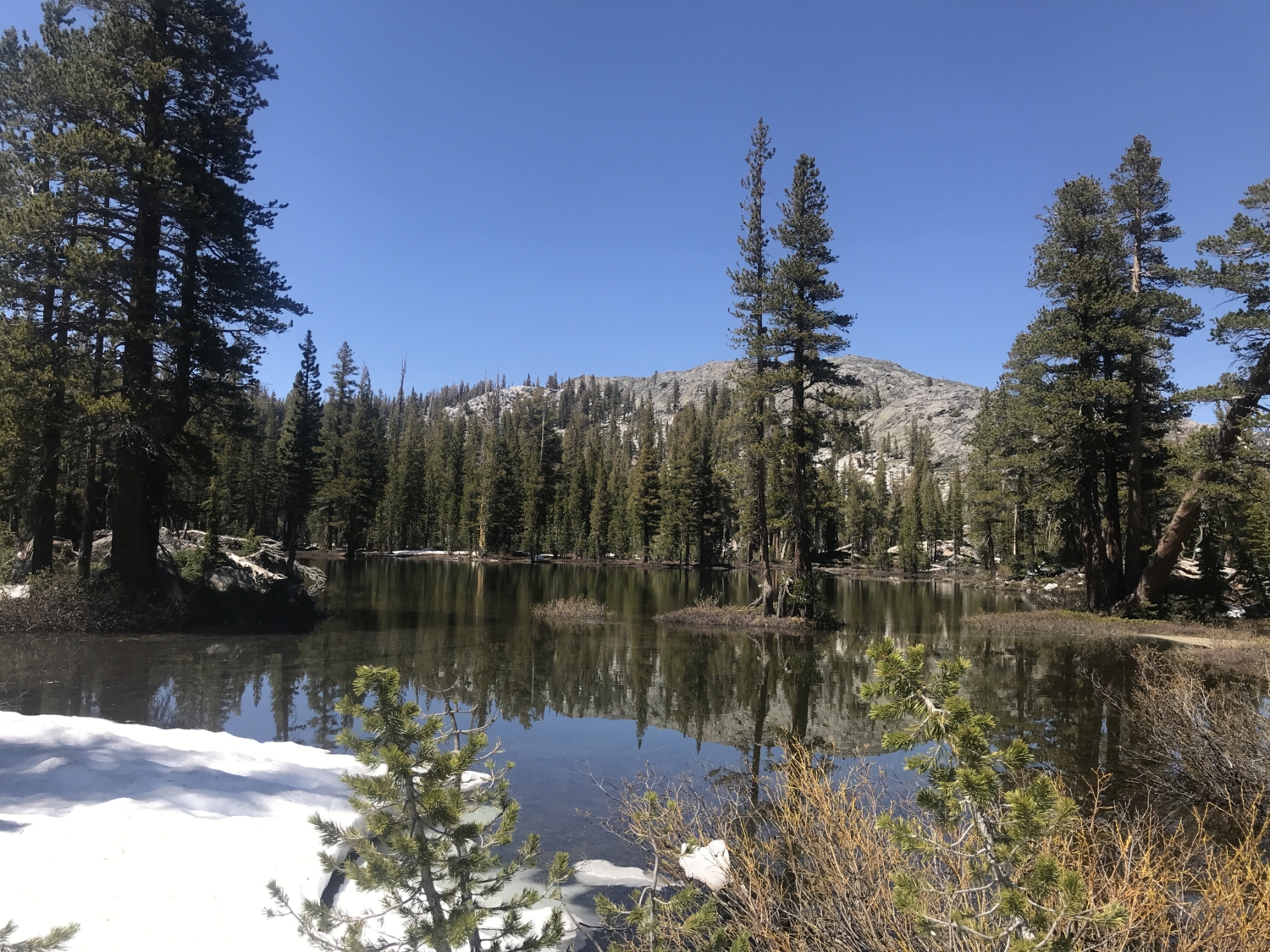 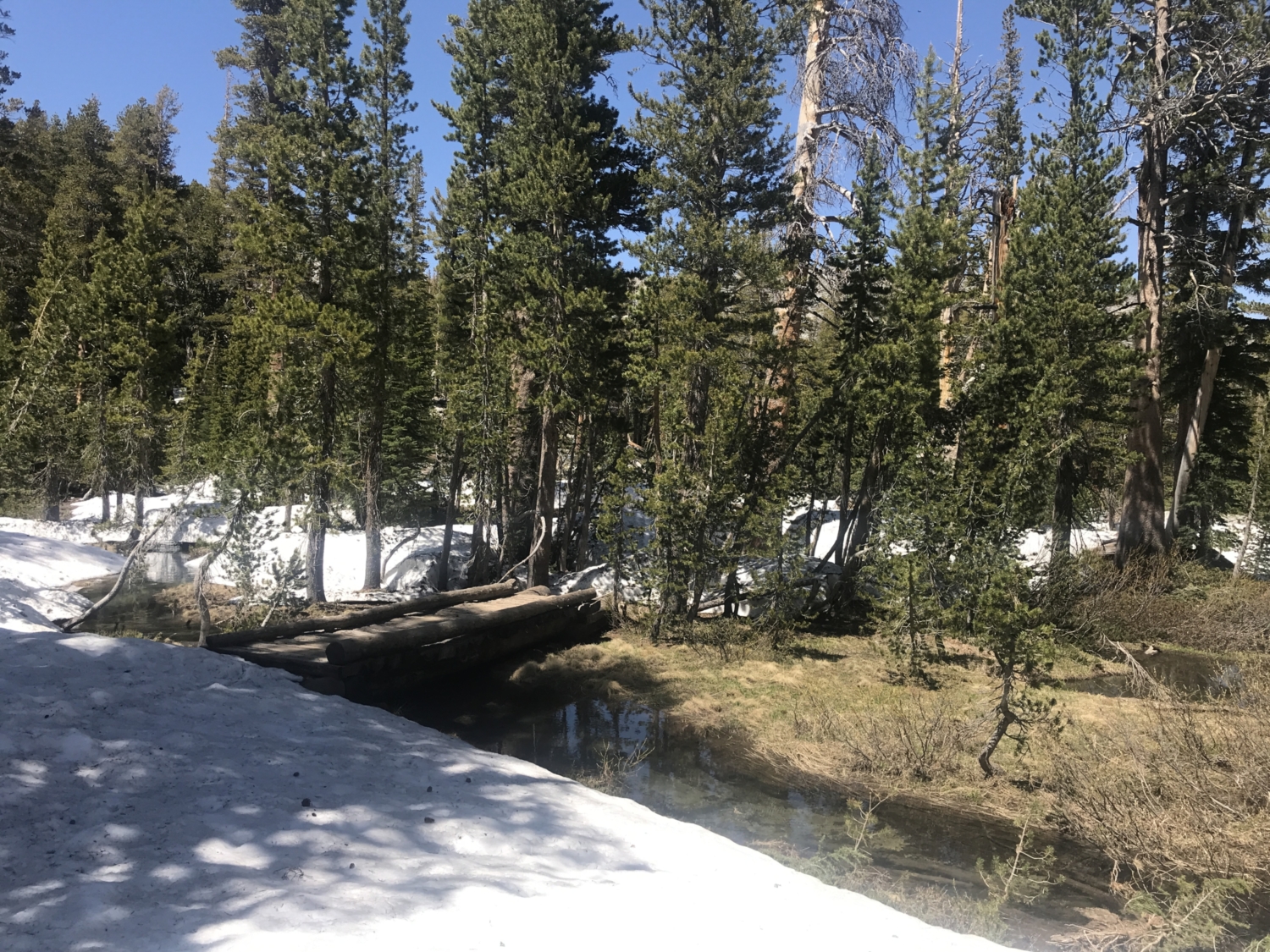 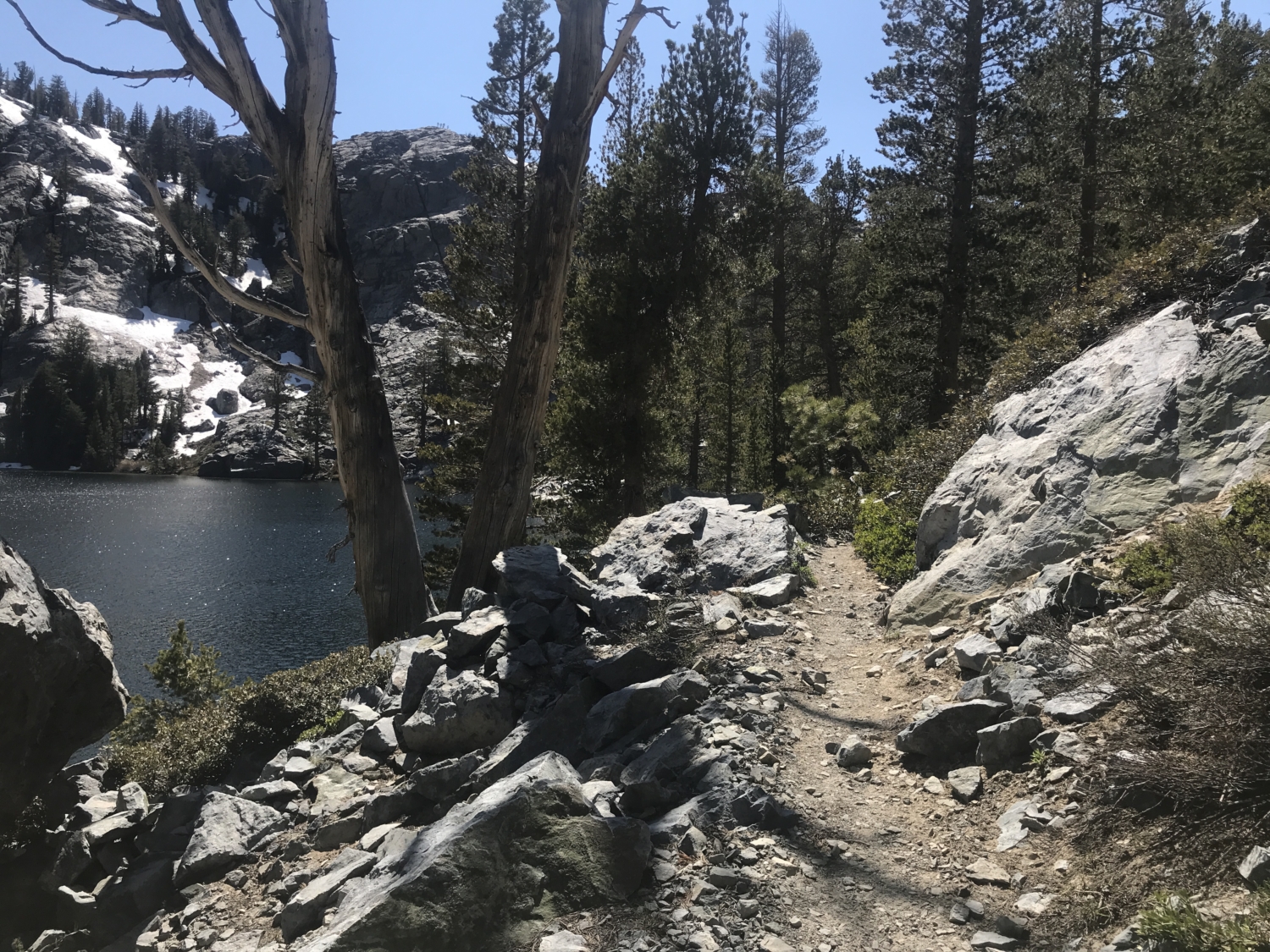 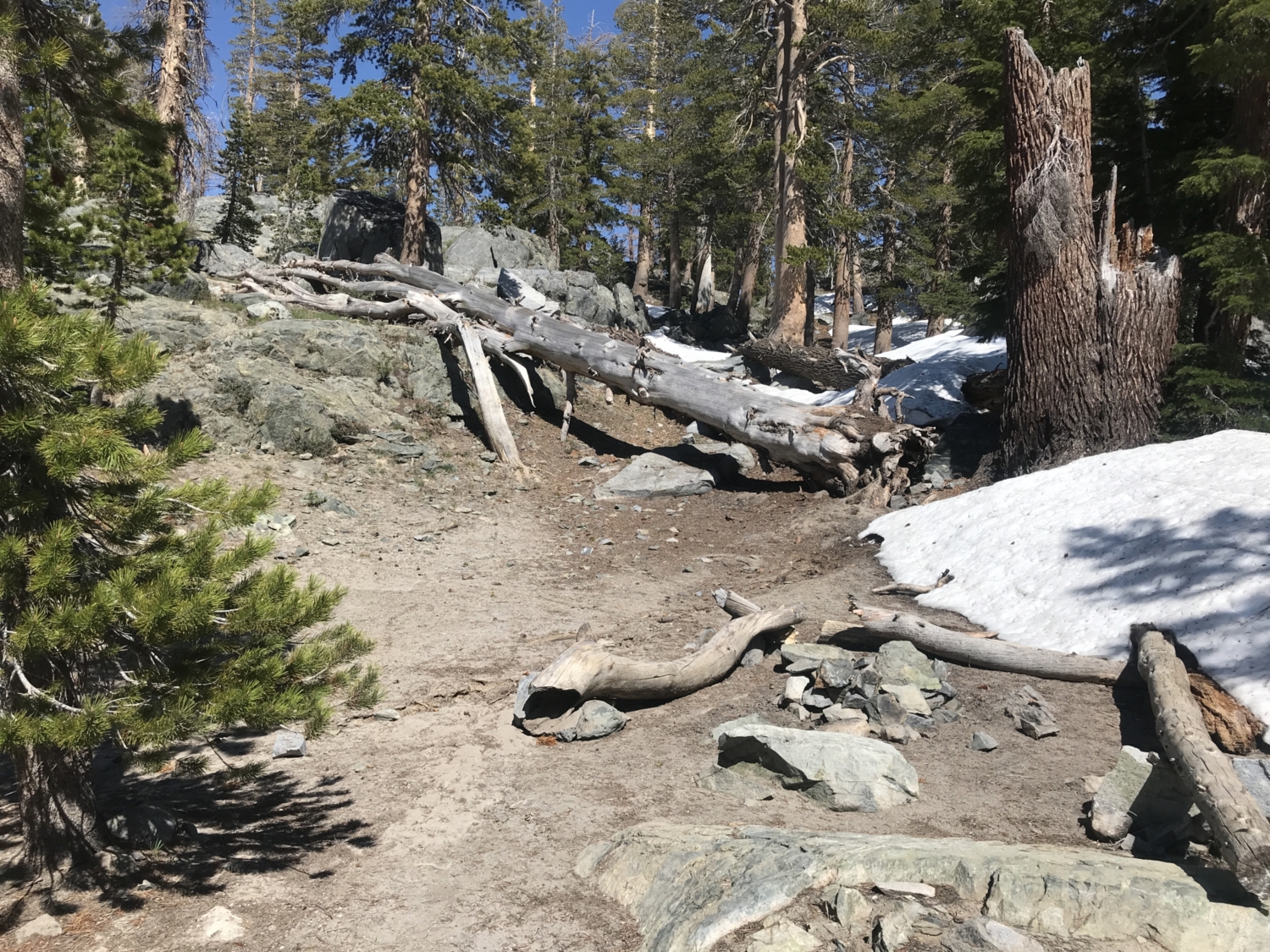 After a full day of passing alpine lakes, Rosalie is clearly the loveliest of the bunch!

Trail is in good condition, with signs at all junctions. Come prepared in early season months - snow can linger in the shady, wooded areas into summer.

The best campsites can be found along Rosalie Lake's NE shore. Though many lakes in this area do not allow campfires, they are allowed here, provided you use preexisting rings. Camping is also available at Trinity Lakes, about 4.5 miles in.

From US 395 N, take the exit for CA-203 heading west towards Mammoth Lakes. In 3.8 miles, turn right onto Minaret Rd and continue along for 4.2 miles. Park as close as you can to the Mammoth Mountain Main Lodge, then walk to the Mammoth Mountain Adventure Center to grab an $8 shuttle pass. Take the shuttle to the Devils Postpile stop.