In 2013, an electrical malfunction on private property in the hamlet of Mountain Center triggered a wildfire that would ultimately burn for 16 days and scorch over 27,000 acres. Dubbed the Mountain Fire, this blaze raced east through dense chaparral before climbing toward the spectacular Desert Divide. The fire crested the divide, dropping to within two miles of Palm Springs, before racing north along the divide into Mt. San Jacinto State Park to ultimately threaten both the park’s old-growth forest and the town of Idyllwild. Fortunately, a massive summer thunderstorm effectively extinguished the blaze before Idyllwild could feel any effects, and the burn cleared decades of detritus while refraining from destroying too many trees. 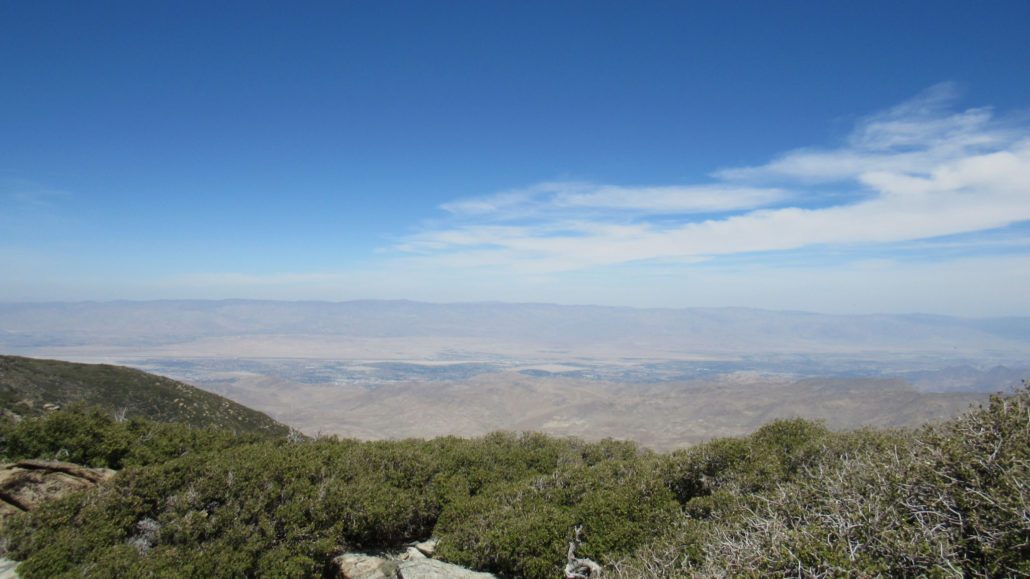 The Coachella Valley from the Desert Divide

From the hiker’s perspective, the most tragic result of the fire was San Bernadino National Forest’s closure of one of the most magnificent stretches of the Pacific Crest Trail in Southern California stretching from Fobes Saddle to Tahquitz Valley. Prior to the fire, numerous peaks scraping or surpassing 7,000′ and 8,000′ tempted peak baggers with views encompassing both the Coachella Valley and the Inland Empire and Peninsular Ranges. While many of those peaks – Spitler, Apache, Antsell Rock, and Red Tahquitz to name a few – still remain inaccessible four years after the blaze (as of November 2017), the entirety of the PCT south of Fobes Saddle along with many slightly lower peaks remains still open. 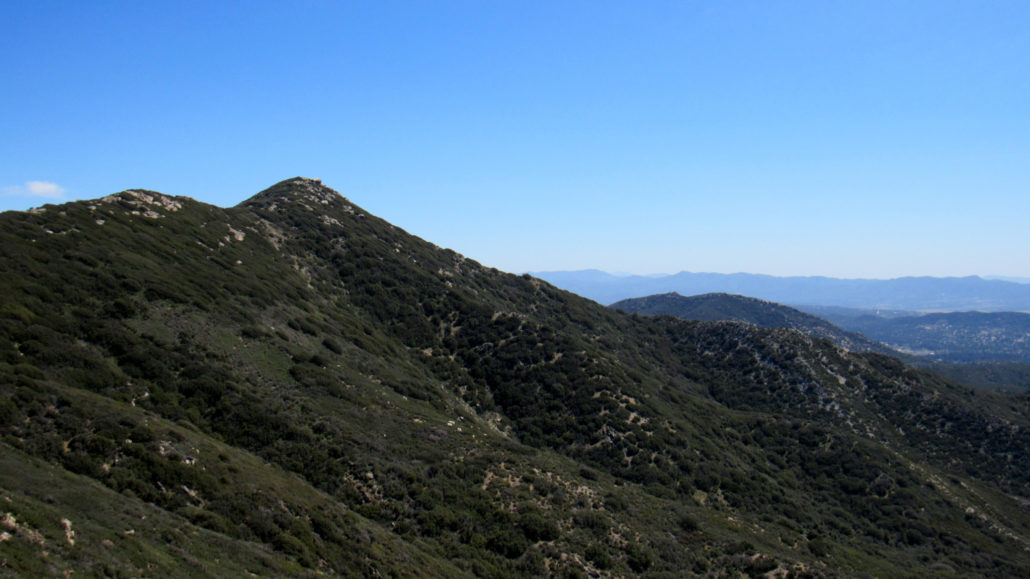 Pyramid Peak, the first accessible 7,000’+ peak you encounter on the Pacific Crest Trail moving south to north, is one remaining option for the kind of peak-bagging that hikers enjoyed prior to the Mountain Fire. While you can reach the summit via a long point-to-point approach that exclusively utilizes the PCT, a shorter, albeit steeper route allow you to access the Desert Divide and the peak from Morris Ranch Road. 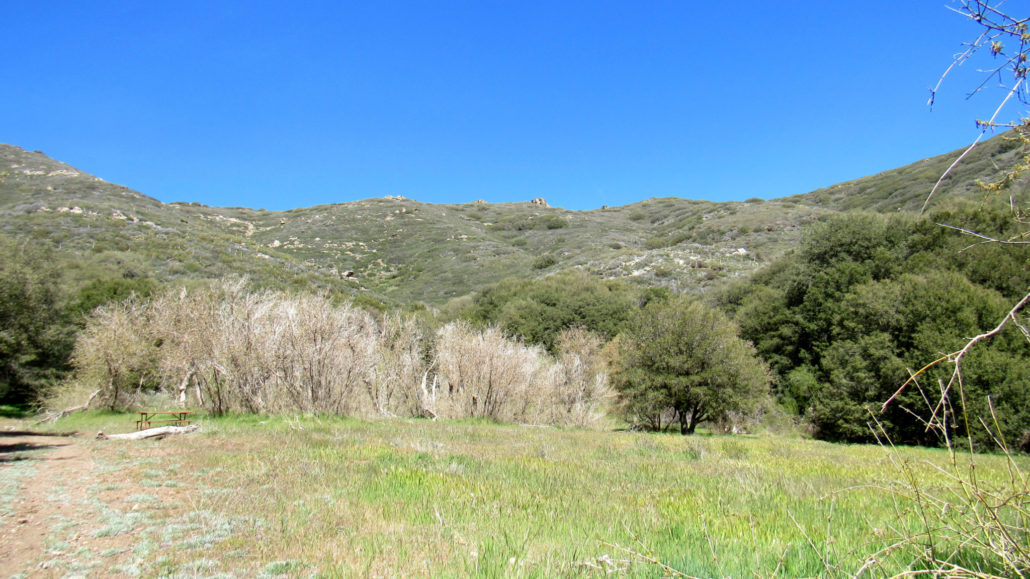 From the parking area near the end of Morris Ranch Road, continue north to the end of the paved road and veer onto a dirt road signed for Cedar Spring. This dirt road acts as an easement through private property that approaches the San Bernadino National Forest boundary about 0.4 mile into the hike. At 0.3 mile, a single-track trail peels off on the left. Take the turn at this junction to plunge into the cool shade of live oaks crowded around the intermittent streambed of East Canyon. 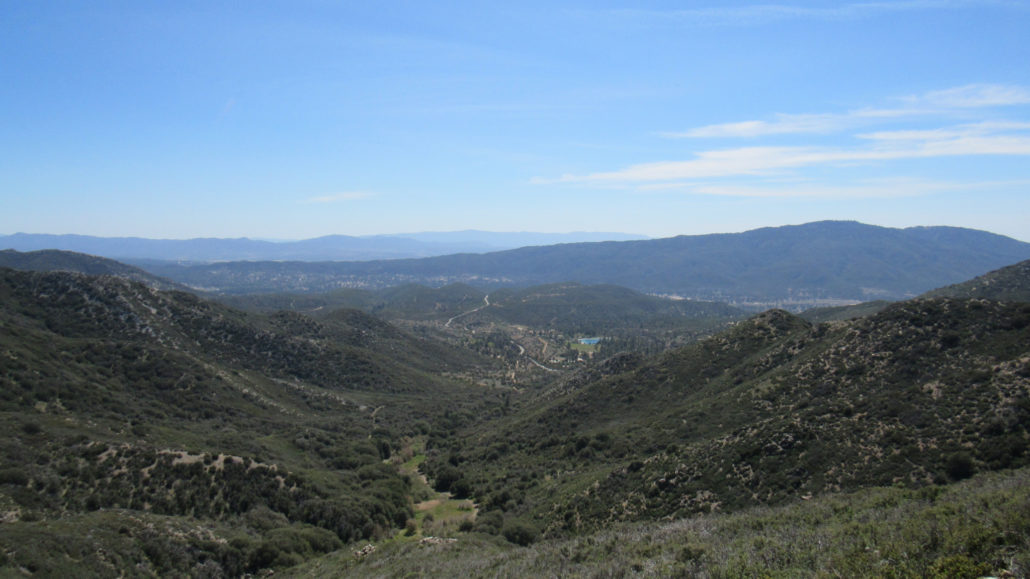 The trail hops back and forth across the streambed, remaining mostly beneath the oaks until reaching a sloping meadow rimmed by deciduous black oaks at 0.9 mile. At 1 mile, the trail leaves the meadow and commences a long, switchbacking ascent over a southwest facing slope that brings you to a junction with the Pacific Crest Trail at 2.2 miles. The southern exposure on this slope means that you’re in for a hot, sweaty slog. Even if you’re hiking this during the winter and spring, this section can be a bit uncomfortable. An early start will be your friend if you want to avoid the discomfort. 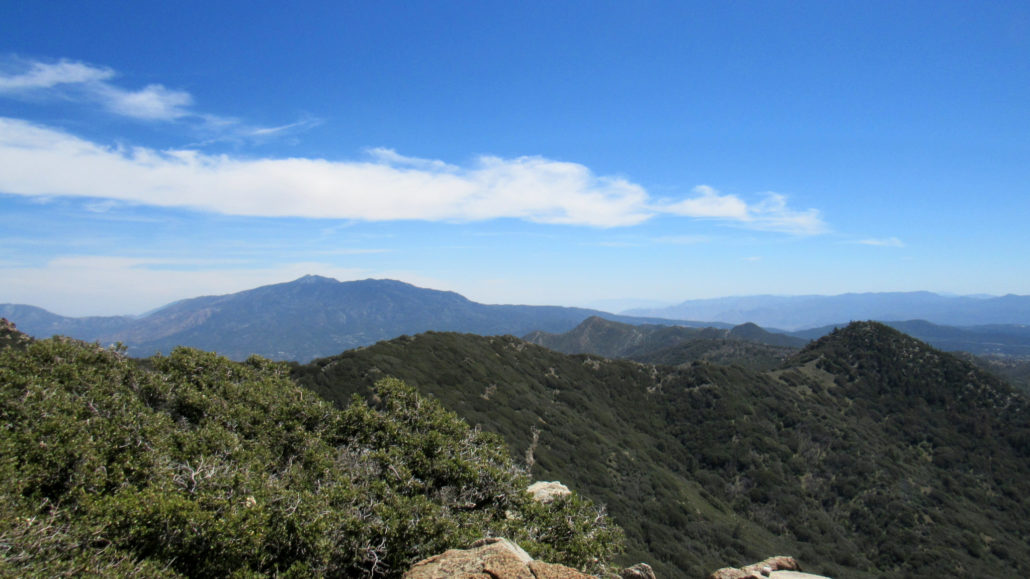 Looking south along the Desert Divide toward Toro Peak

Once upon the Pacific Crest Trail, you reach a four-way junction with the north and south branch of the PCT on the left and right, respectively, with the continuation of the Cedar Spring Trail leading directly toward the scorched vegetation surrounding Cedar Spring and beyond to the desert floor. Turn right. Although you are now standing at an elevation of nearly 6,800′, there are very few conifers to be found along the route. A combination of past fires and close proximity to the desert ensures that the habitat remains mostly chaparral with occasional thickets of live oaks sheltering a few choice campsites. 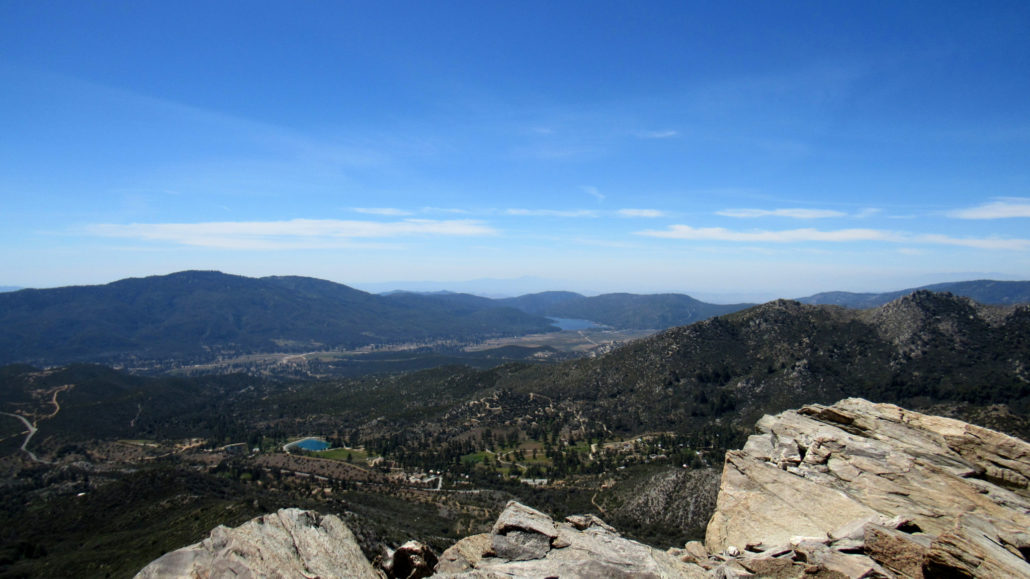 The primary attractions of the Desert Divide are the magnificent views. The Coachella Valley unfurls before you. The massive sprawl of desert cities reaches north toward the ramparts of the Little San Bernadinos that mark the southern boundaries of Joshua Tree National Park, some of which is visible from the Divide. In the opposite direction (south and west), Garner Valley’s relatively verdant confines rise more quickly to the forested spine of Thomas Mountain. Coastal highlights such as the Santa Ana Mountains and Palomar Mountains are easily visible, but it’s towering body of Mt. San Jacinto that is perhaps the most dominant sight. 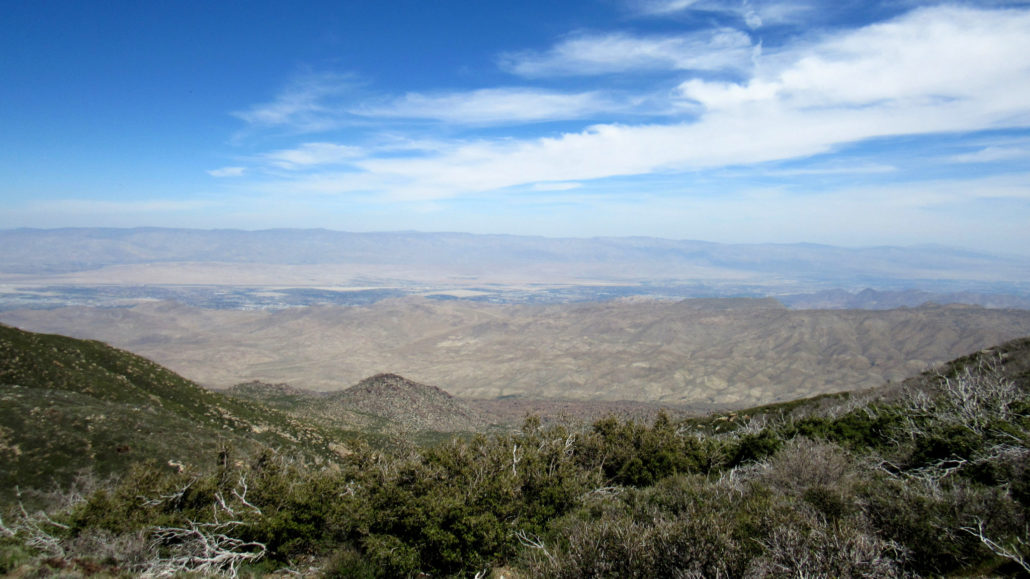 As you head south on the PCT, you get to enjoy all of these views along with a much more level stretch of hiking on the approach to the cairn-marked informal path to the summit of Pyramid Peak. At 2.5 miles, you pass the modest and easily attained summit of Little Desert Peak which presents the option for a quick diversion. Beyond Little Desert Peak, the PCT follows the spine of the divide, sometimes dipping onto the eastern side of the spine to circumvent a knob. The western side of the trail features dense growths of chaparral and occasional groves of canyon and interior live oaks. Several flat sections beneath this modest canopy of oaks reveal good campsites that present an option for backpacking. 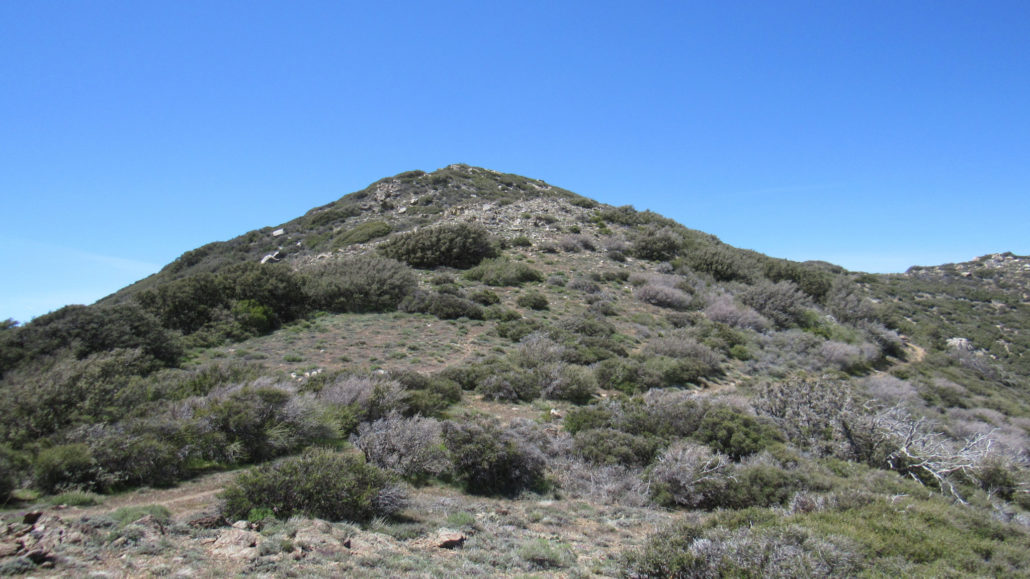 The trail pulls away from the spine of the Divide in order to veer southeast around the base of Pyramid Peak. You can approach Pyramid Peak from this point, but you’ll have to do a lot more bushwhacking along this dense, north-facing slope. An easier option is to follow the PCT to the southeast corner of the peak’s base, 3.5 miles from the start and then to follow the informal path from a cairn that marks the approach. You’ll have a lot less vegetation to contend with, and the slope is a bit more moderate. 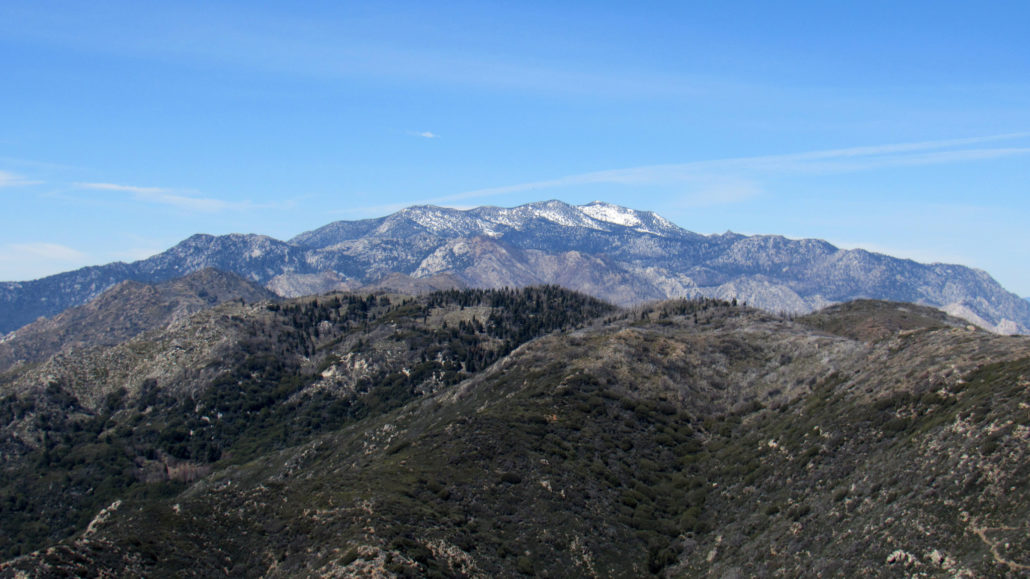 Mt. San Jacinto and the peaks of the northern Desert Divide

Once atop the peak, keep your eyes peeled for the Morris benchmark before shifting your gaze to the now panoramic and more evolved version of the Desert Divide views you’ve been enjoying thus far. The rocky summit should be reasonably comfortable for an extended break, but do be warned that shoulder seasons (fall and spring) can bring high winds that may make the summit less comfortable for extended periods. Whether your time on the summit expires sooner or later, the return journey is a simple matter of retracing your steps. I suggest resisting the temptation to drop down to the PCT via the peak’s northeast slope as you will face all of the bushwhacking I alluded to previously. 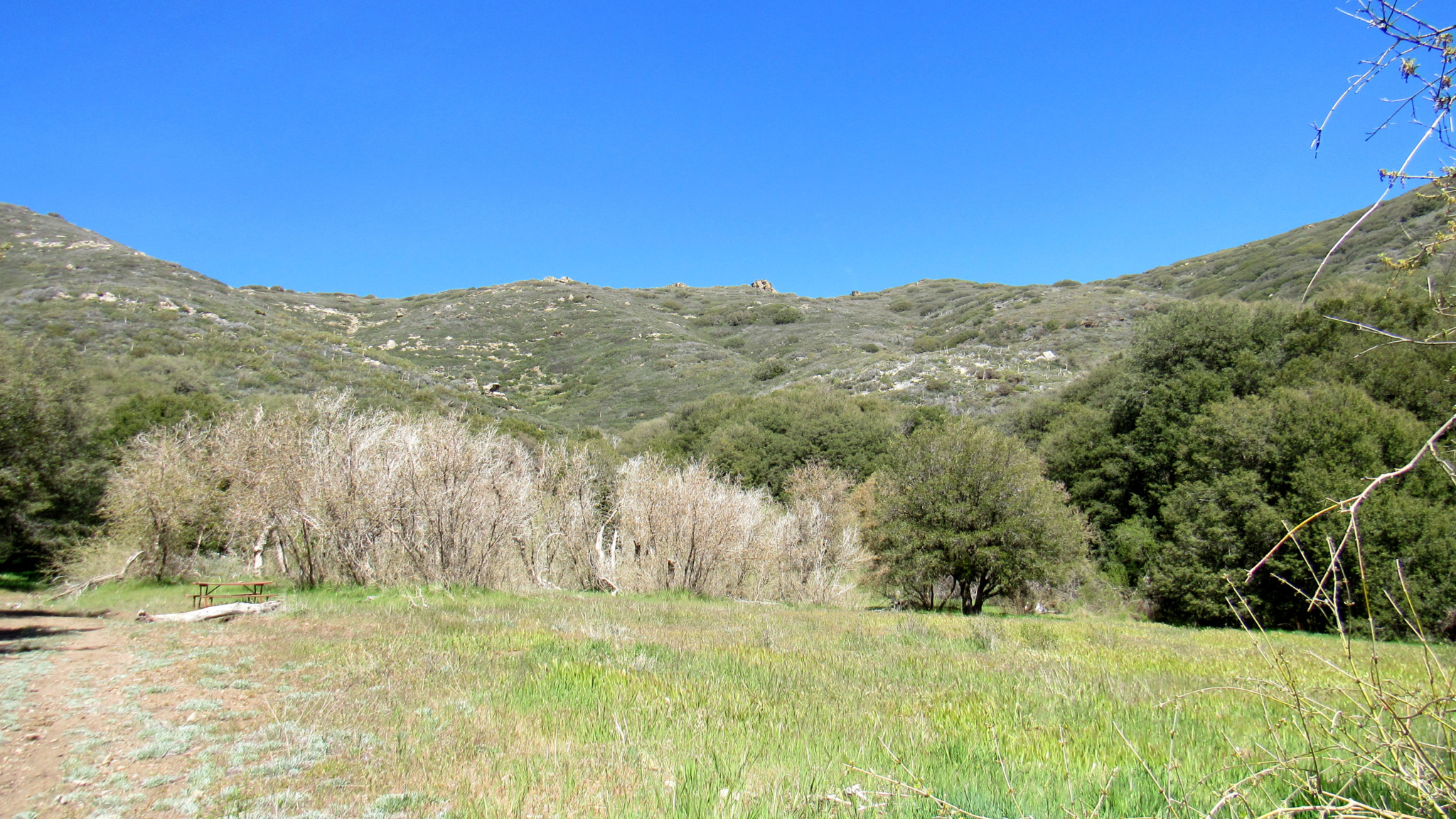 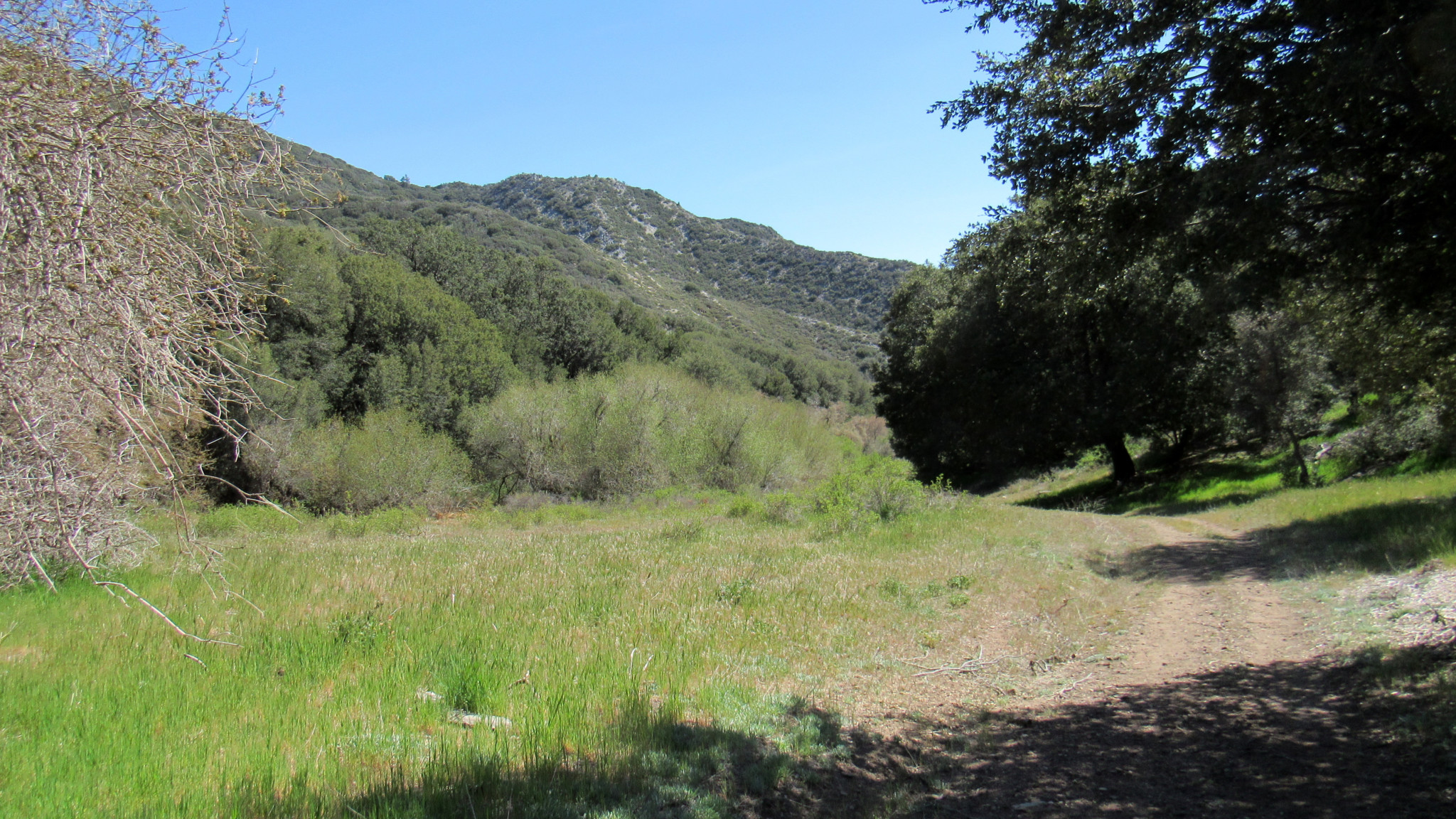 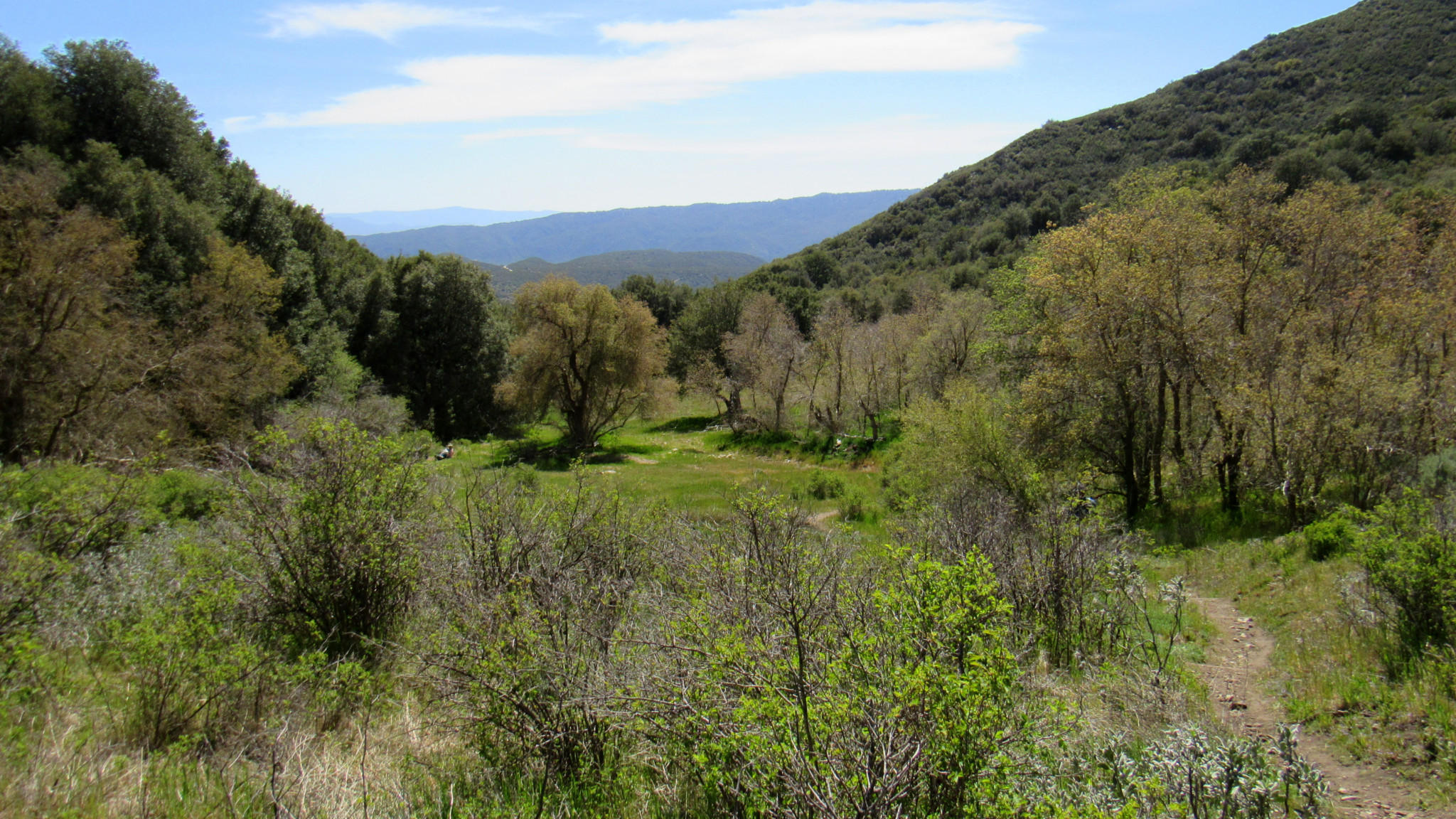 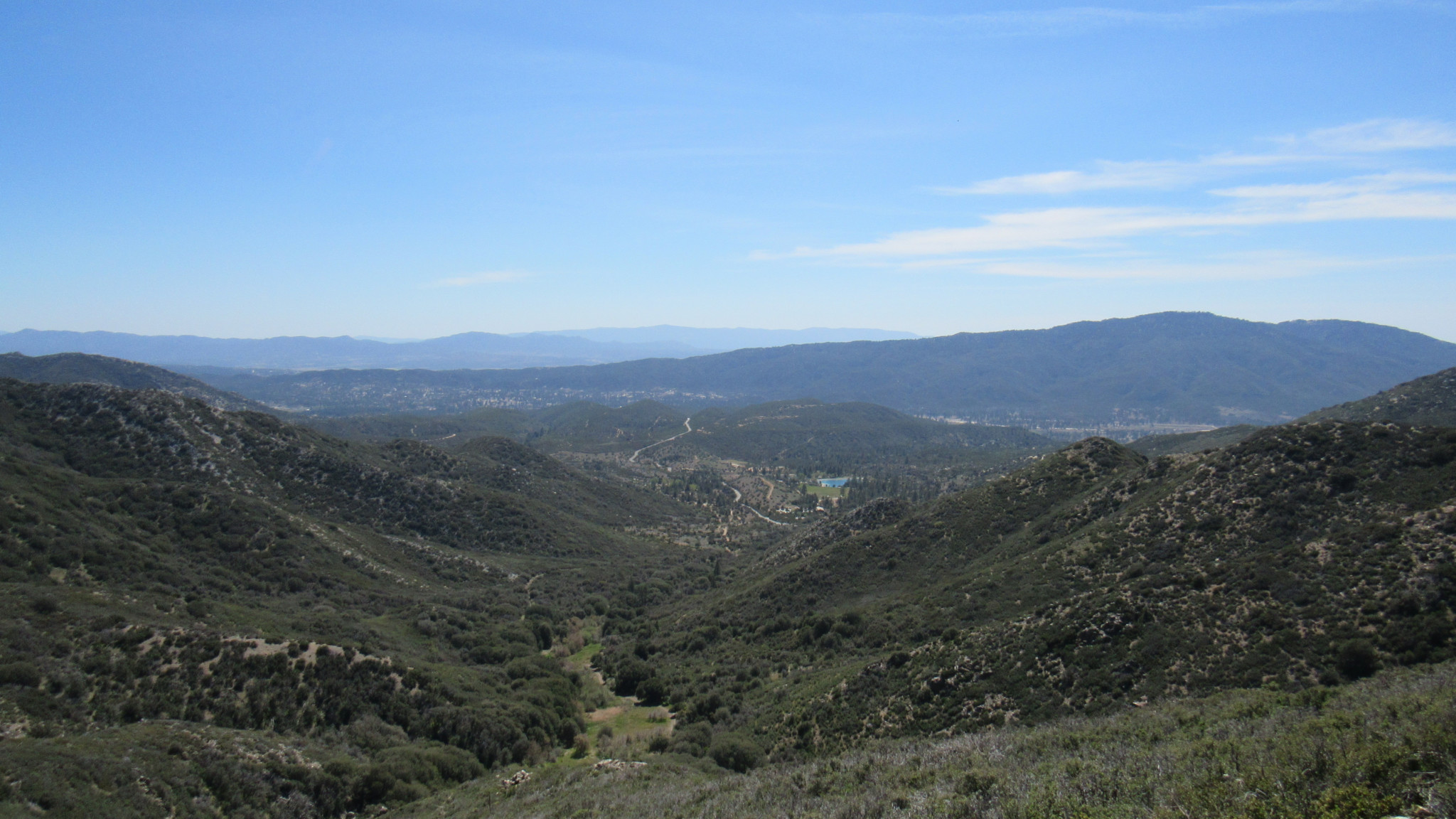 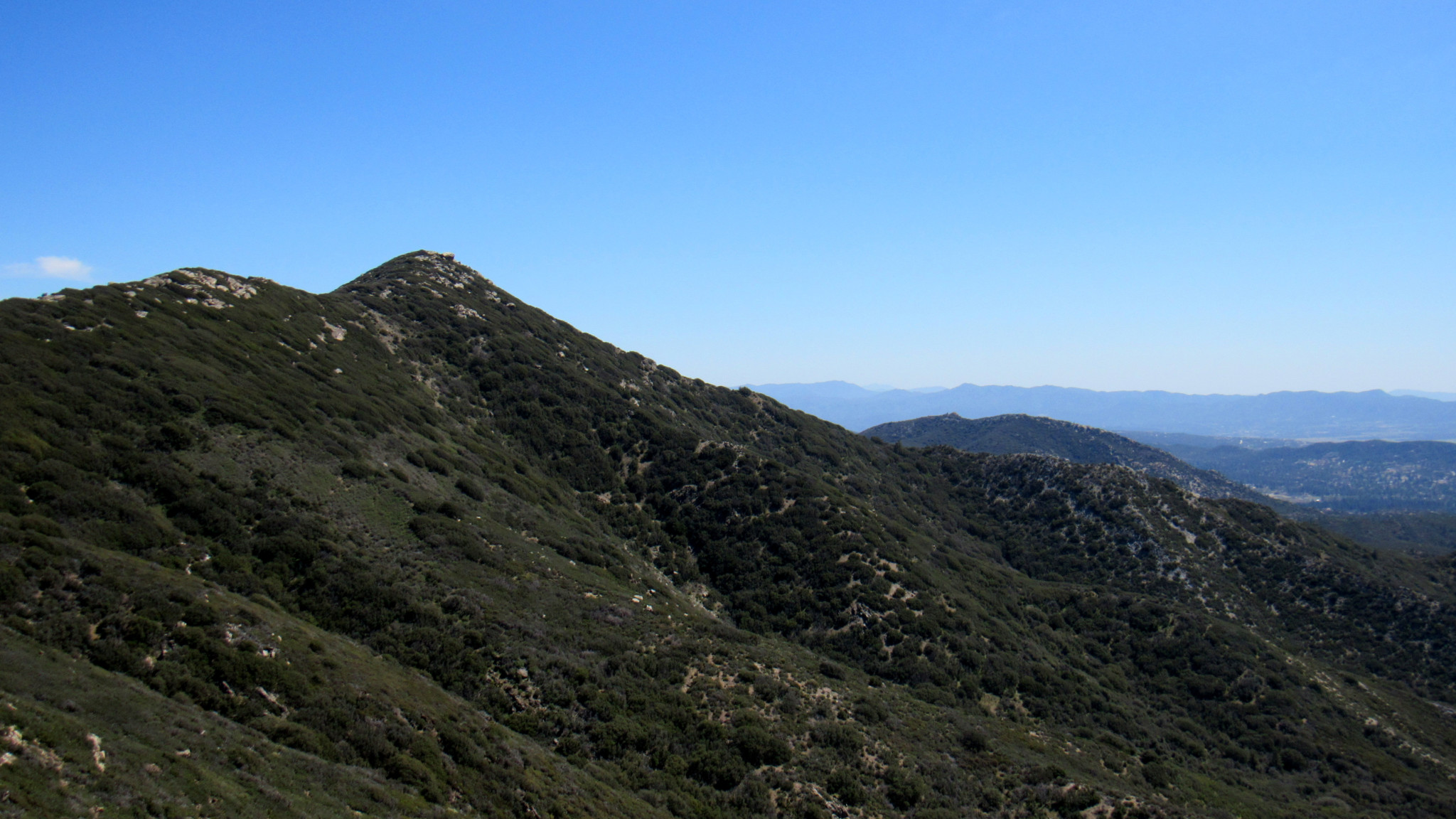 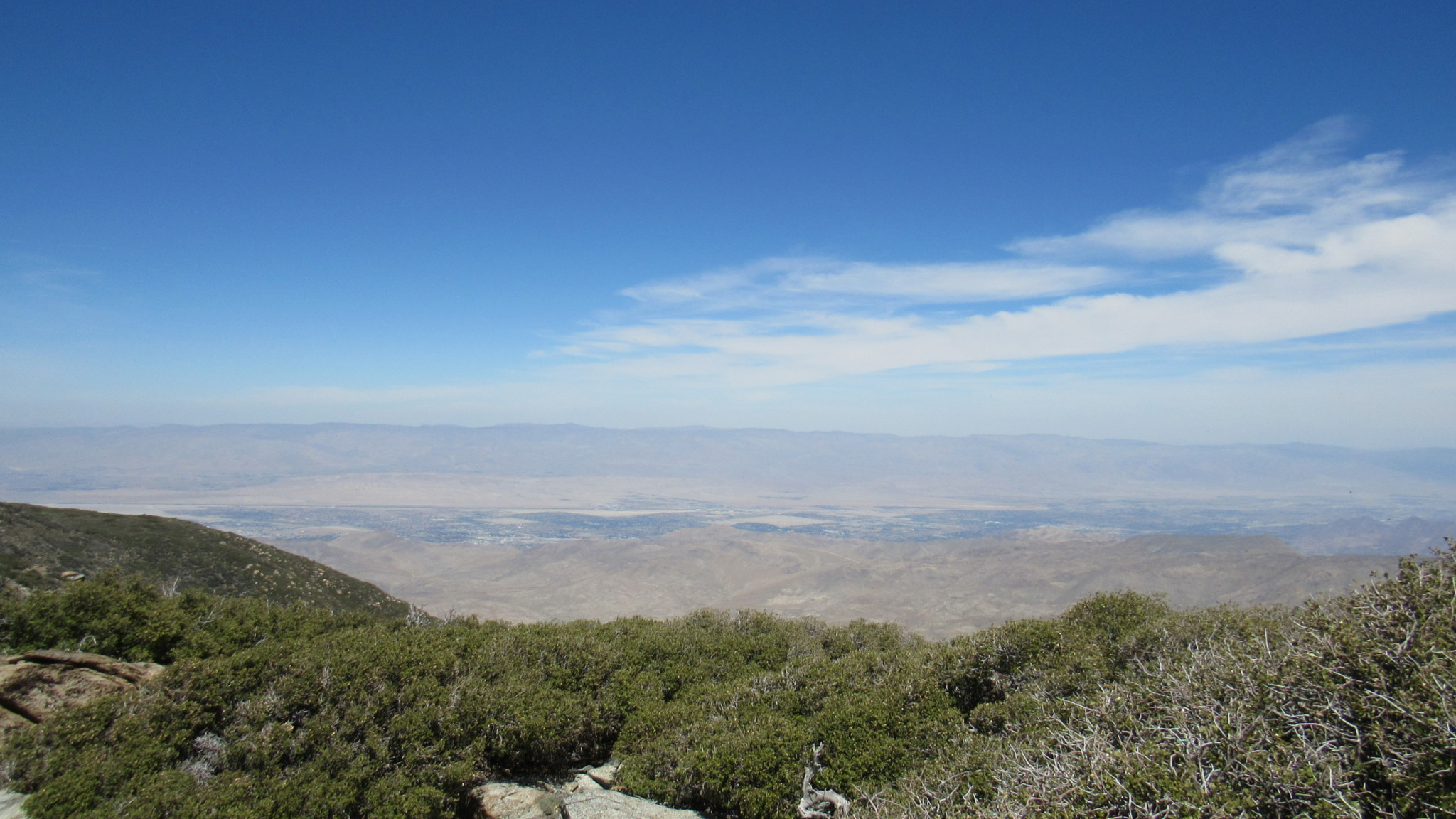 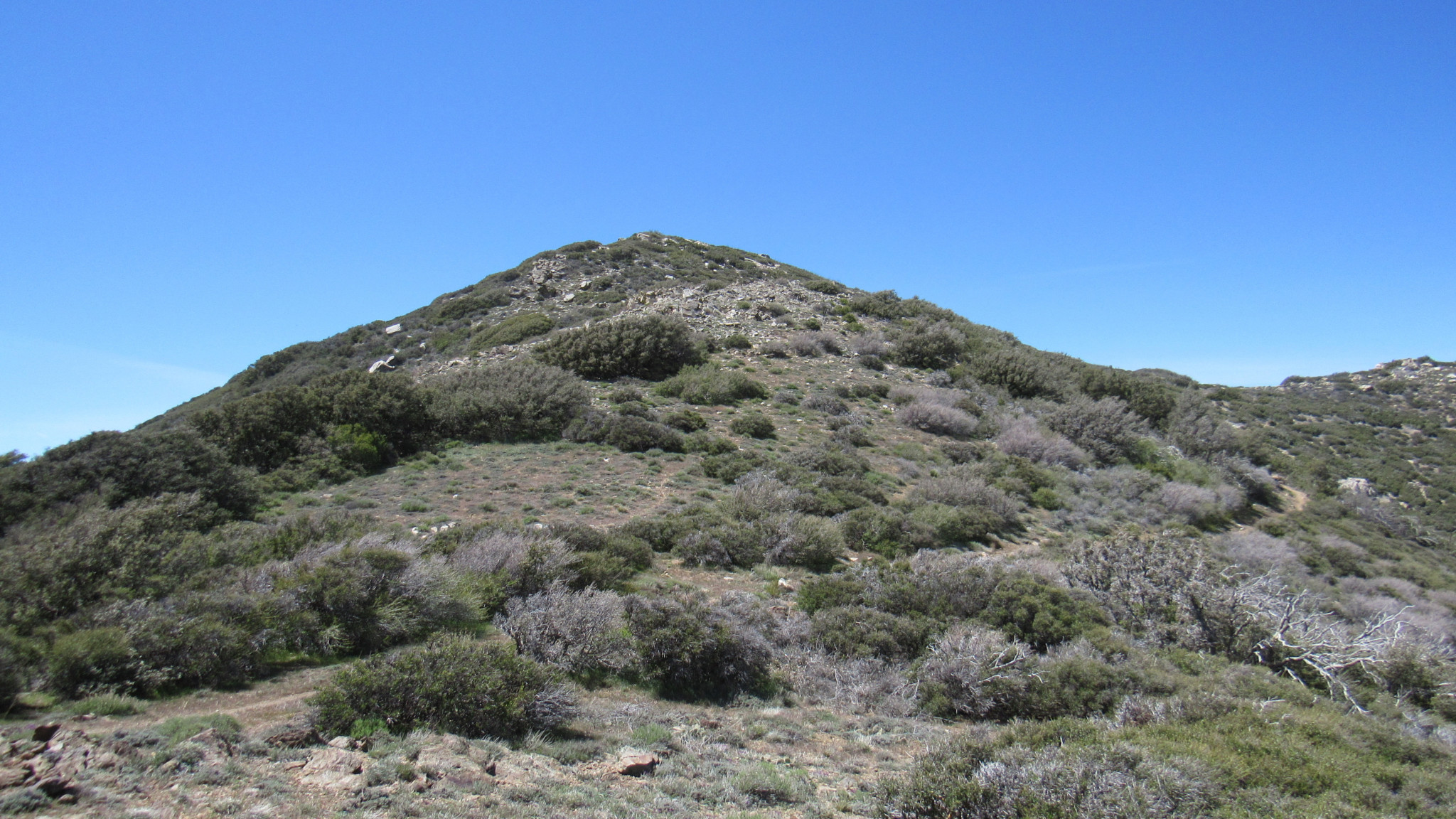 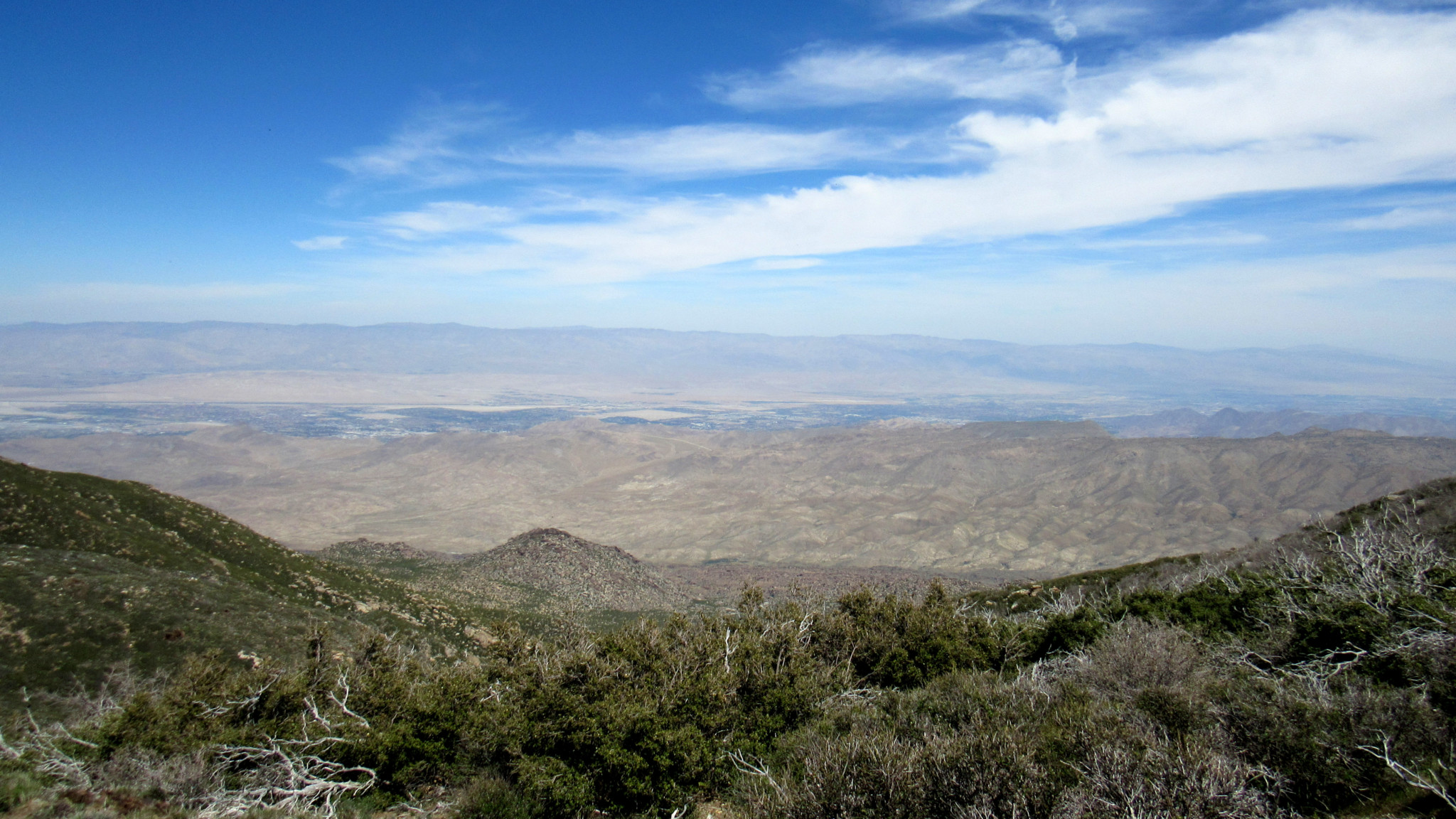 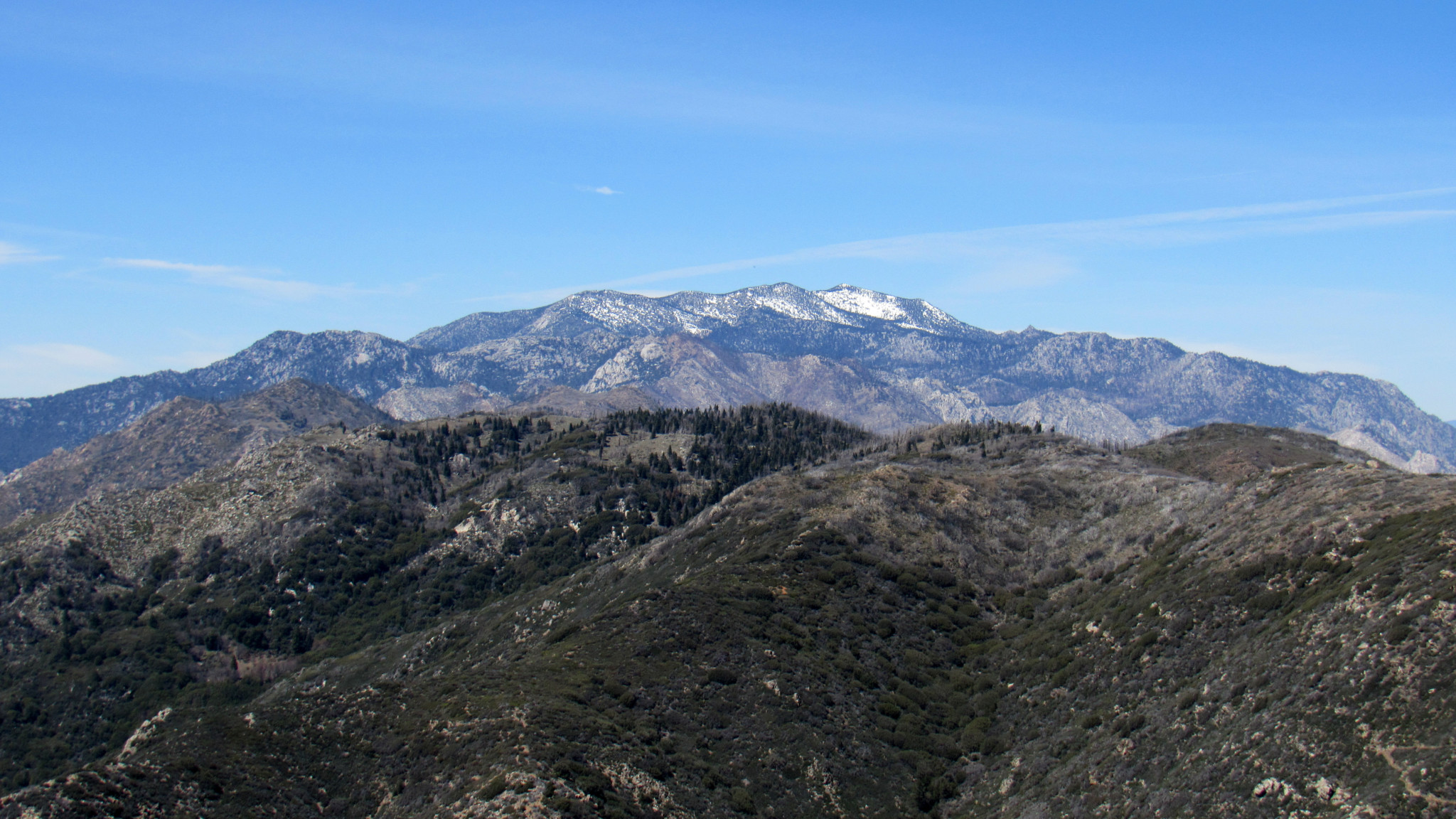 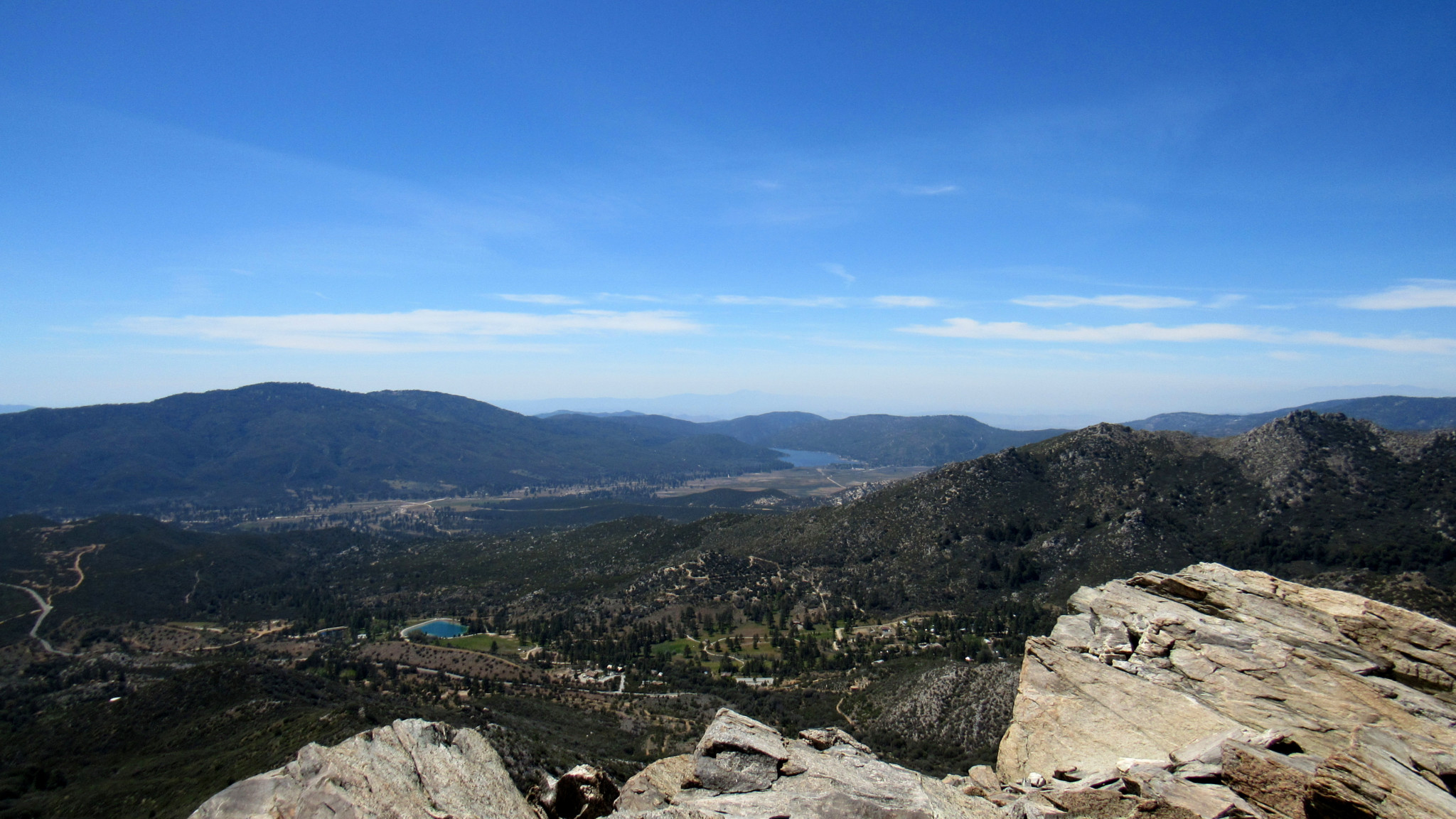 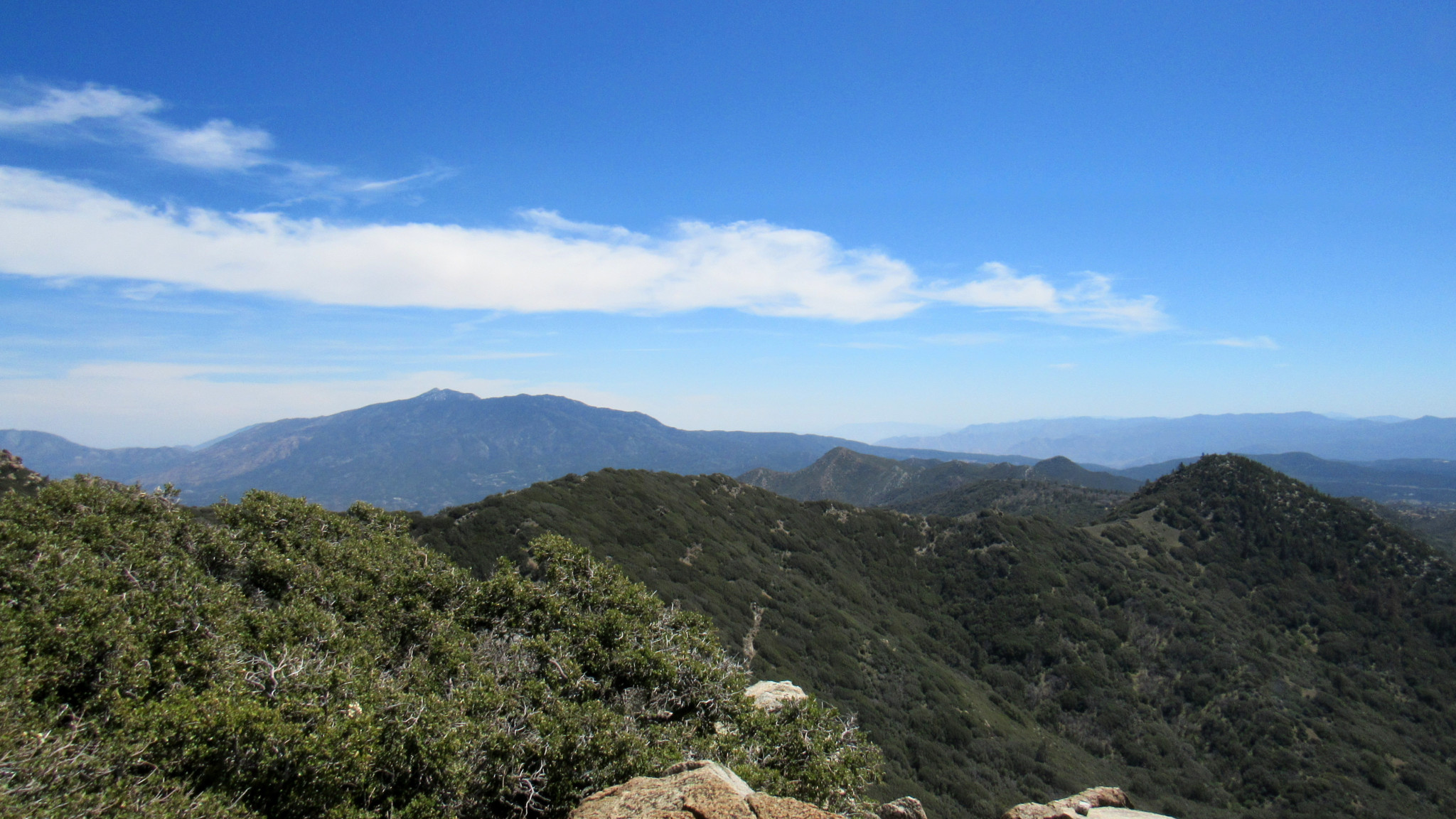 The trail is well-traveled and easy to follow up until the informal path to the summit of Pyramid Peak/Morris Benchmark. That informal route works its way through high elevation chaparral to the rocky summit.

A number of camping options abound. Technically, the closest sights are the free yellow post sites on Thomas Mountain. However, not all cars can reach those, so consider the campground at Lake Hemet.