In 1769 in what was then known as the province of New Spain, Franciscan missionaries established a mission along a river in an area previously discovered by Juan Rodriguez Cabrillo called San Miguel. Father Junipero Serra named the mission in honor of the Spanish saint Didacus of Alcala, more commonly and colloquially known as San Diego. 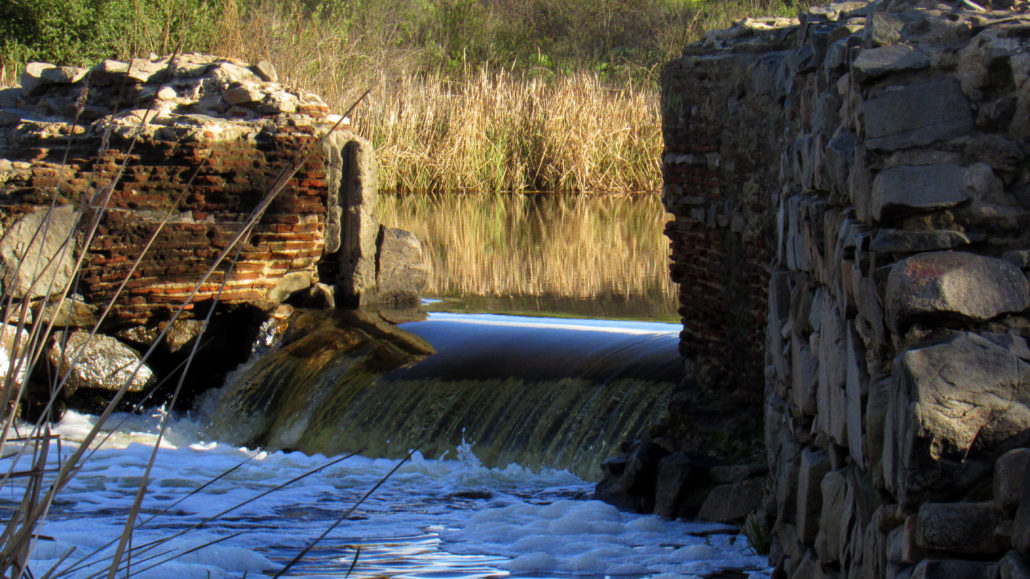 The original mission stood upon a hill now known today as Presidio Hill (the former site of the mission’s Presidio), and was later moved east to what is now known as Mission Valley. In order to solve the issue of limited water supply in a region now famed as a semi-arid land of perpetual sunshine, the Franciscans constructed a dam across the San Diego River just below the confluence of a tributary draining a serene oak- and sycamore-lined canyon. 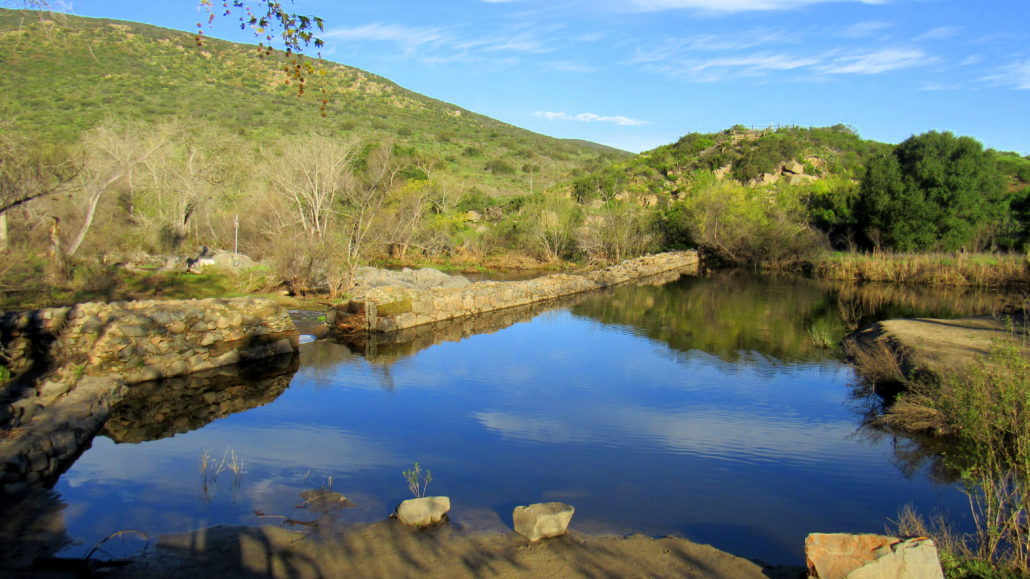 This dam, which impounded a modest amount of water in a narrow reservoir, carried water six miles downstream via a flume in order to support the mission’s agricultural needs. This ambitious and enduring hydrological project was the first of its kind of the West Coast. Although the flume is long gone, the Mission Dam still remains as one of the oldest structures in San Diego at over 210 years old. 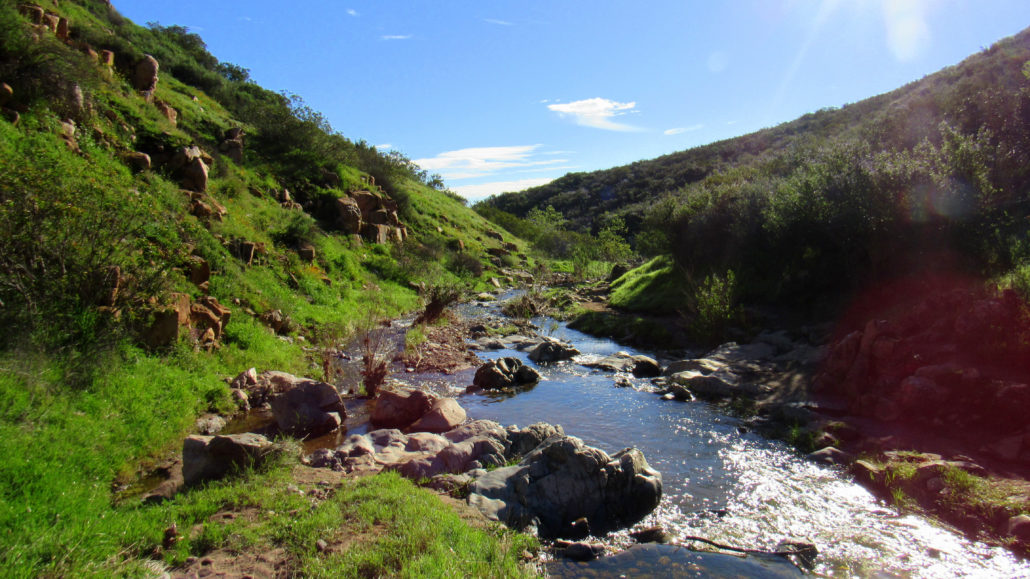 This attractively weathered historic structure is but one of several highlights along this family-friendly trip that also visits seasonal waterfalls, seasonal wildflowers, and a beautiful canyon habitat in one of the loveliest pockets of Mission Trails Regional Park. 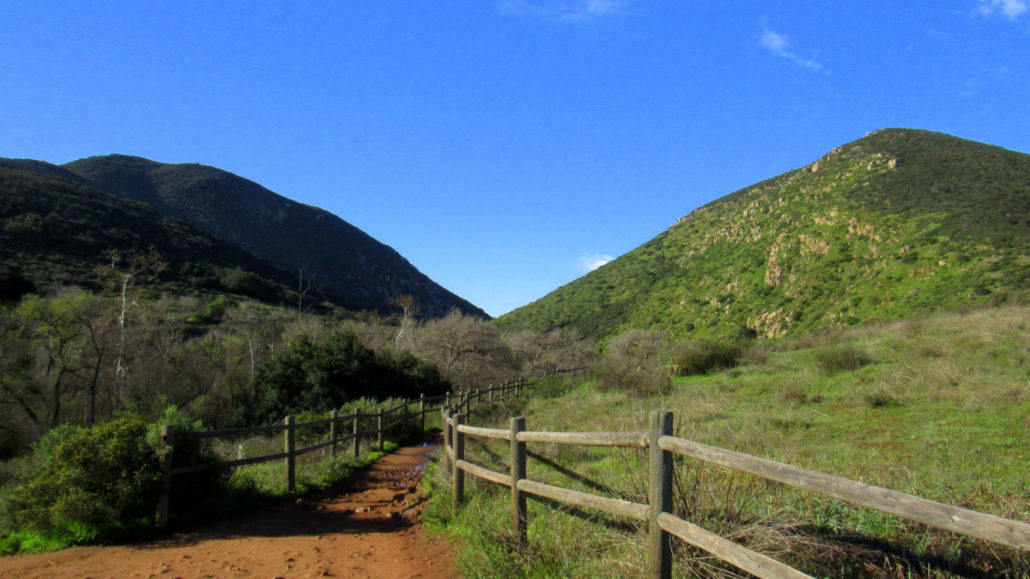 From the trailhead, walk downhill past a marker describing the dam’s history to a brief informal path that leads to the river just below the dam. When the river’s flow wakes up from its summer slumber – usually from late fall to early summer – water collects on the east side of the dam and then tumbles over a small spillway on the south side of the structure. A dense jungle of willows and cottonwoods shade the scene, and waterfowl can be observed floating on the impounded waters. Mild mannered though this river usually is, it is still responsible for carving out the impressive gorge just to the west separating Kwaay Paay Peak from South Fortuna Mountain. 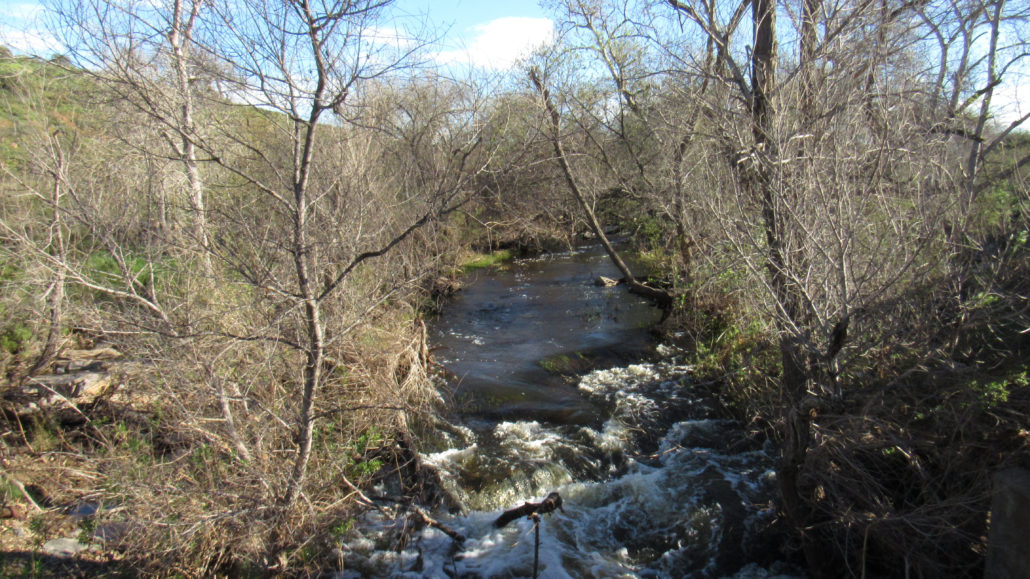 Continue past the dam to reach a bridge crossing over the San Diego River, which either trickles or roars depending on recent rainfall. After passing a sandy stretch, the trail bends to the right to head east along a scrubby slope dotted with wildflowers during the spring. An optional side trail crosses Oak Canyon’s creek bed (either wet or dry, depending on the season) before climbing a slope to a viewpoint overlooking the dam. 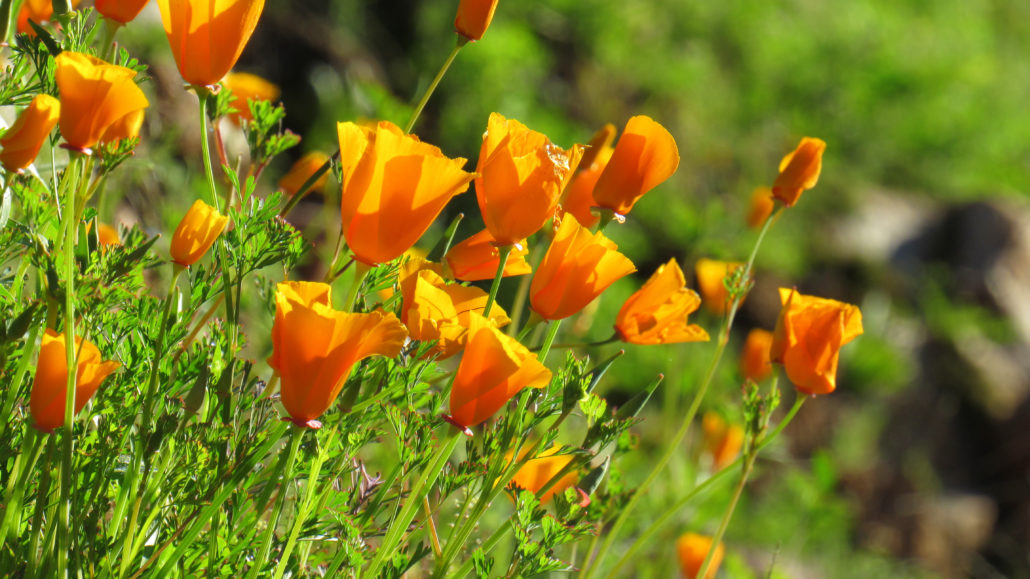 The trail bends toward the north to travel along the creek, often through thickets of oak and sycamore. Several creek crossings over bridges and rocks await as you make your way up canyon. After the initial stretch, the vegetation clears out somewhat revealing grassy slopes to the east and shrubbier slopes to the west. The shrubs on the west wall of the canyon feature numerous ceanothus plants, which produce an impressive display of blue-purple flowers that emit a heady aroma during March. Poppies dot the slopes on the east side during the same period, making March the finest time to visit this area. 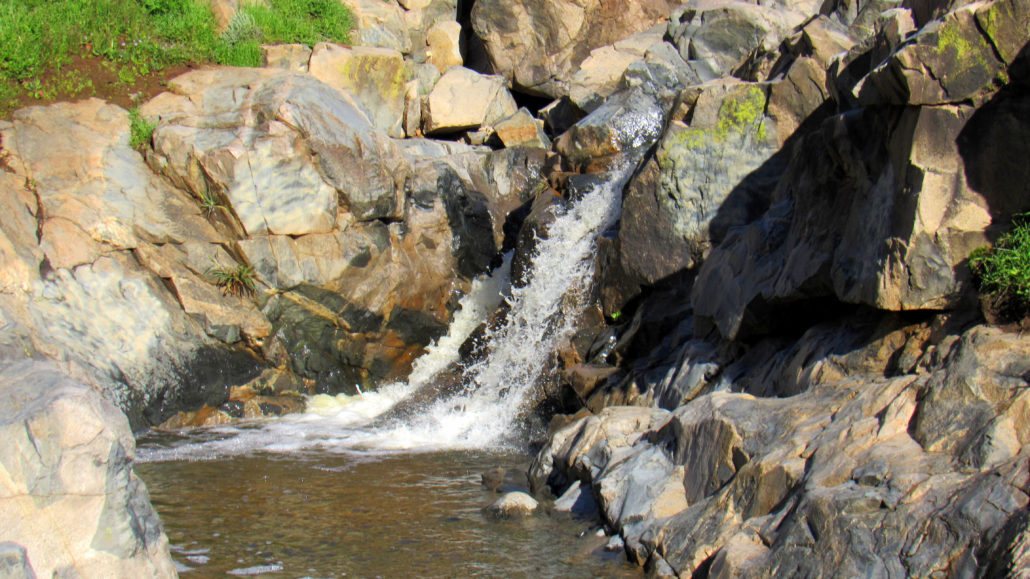 You will reach your first waterfall where the creek spills 10 feet into a small grotto. An informal side trail leads down to a spot 20 yards below the fall. After visiting the fall, continue along the single-track trail as it winds through occasional groves of sycamores and more patches of seasonal wildflowers. Stay straight at the junction with the Grasslands Loop. When you reach a junction with a very steep fire road on the left that leads to Fortuna Saddle, keep right to continue upstream. 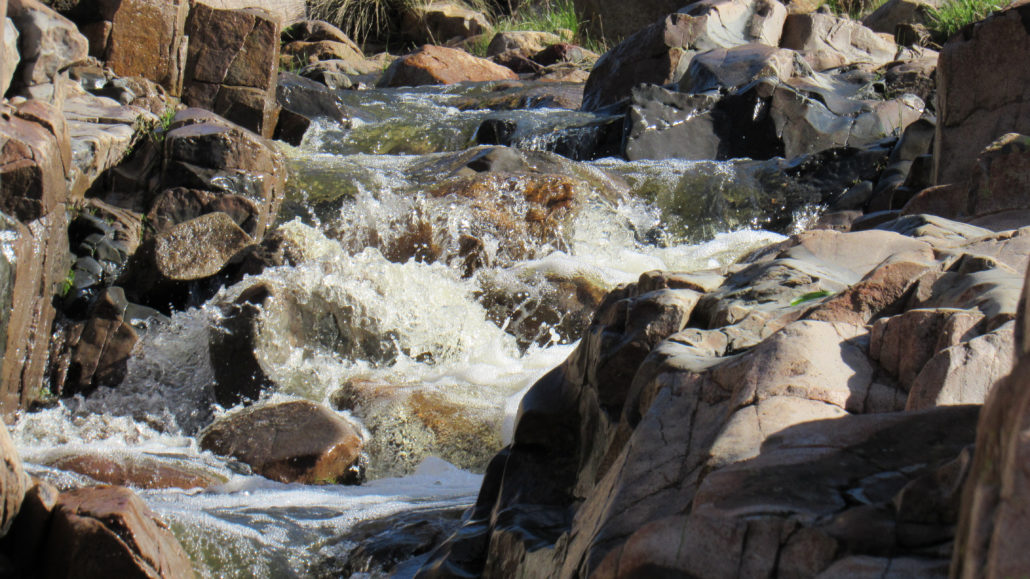 At 1.6 miles, you reach a large outcrop, heavily eroded by the creek’s action. If the creek is flowing, it gushes over a precipice hidden within a narrow crease in this outcrop. Unless you want to get wet, it is hard to view the waterfall from belong. Instead, climb up to the outcrop and carefully peer into the crease to view the falls from above. 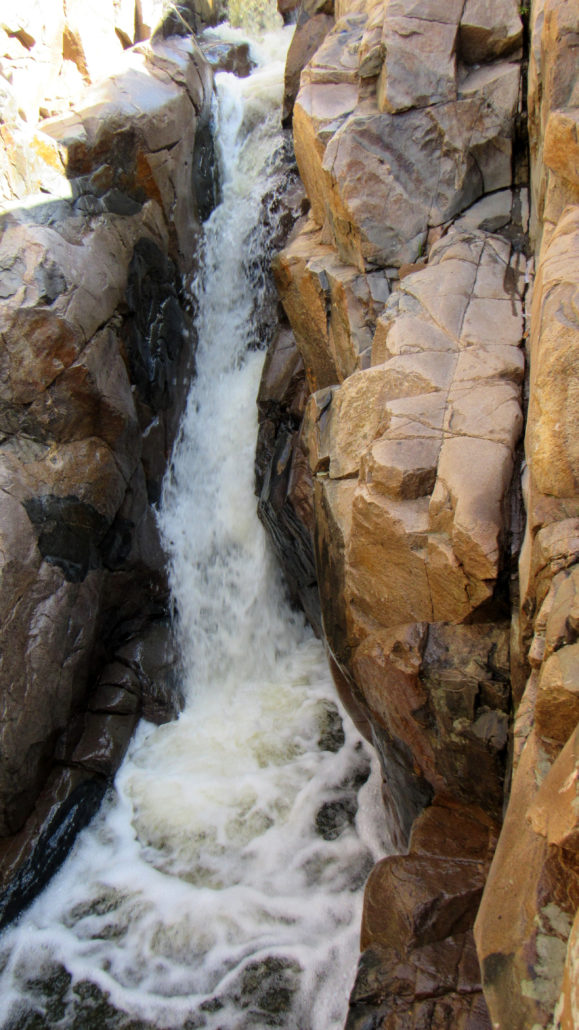 Beyond the waterfall, the trail passes under the 52 freeway before ultimately reaching Miramar Marine Corps Base property. There is no significant scenic improvement beyond this point, so it’s best to turn back at the waterfall. 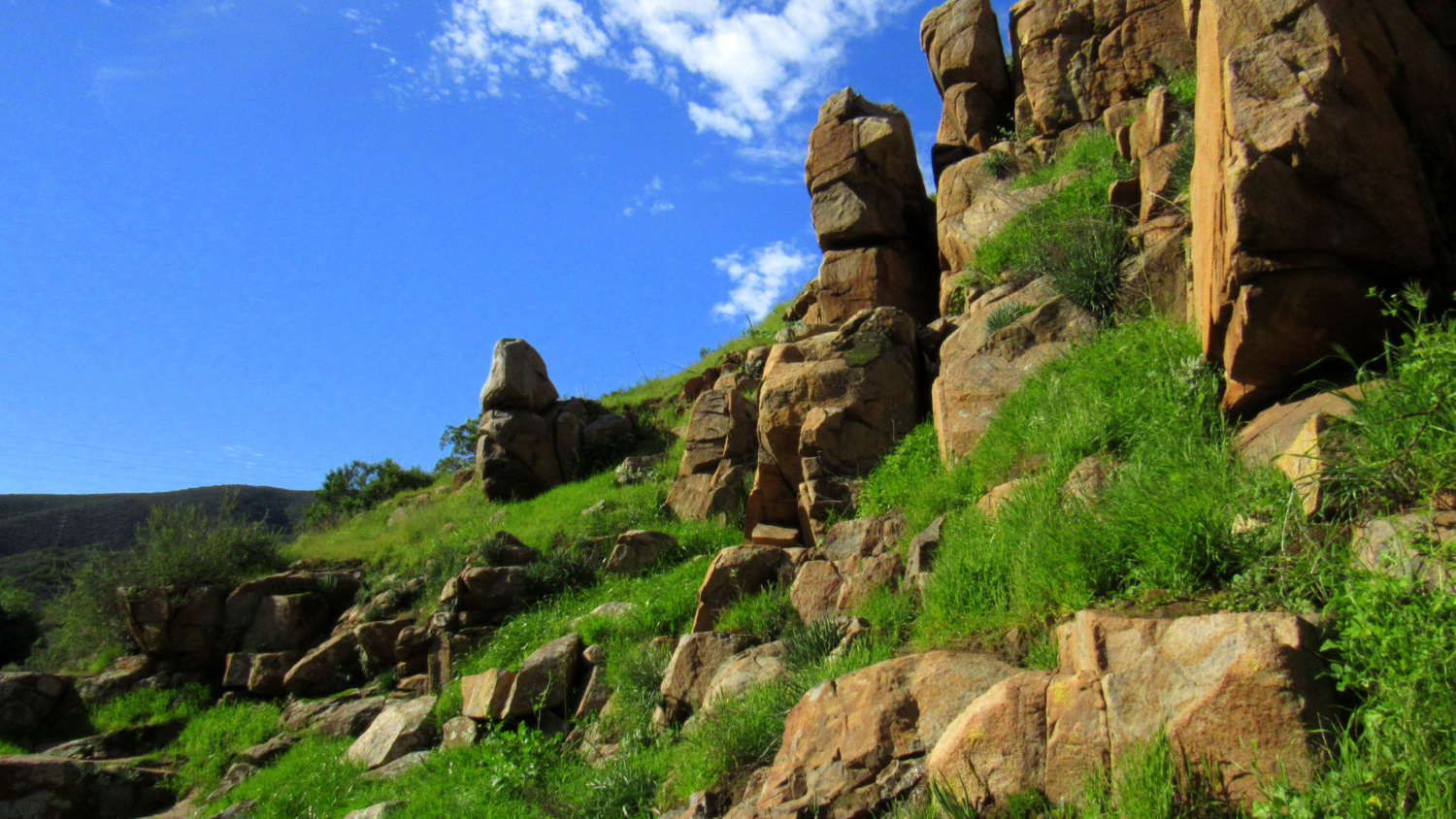 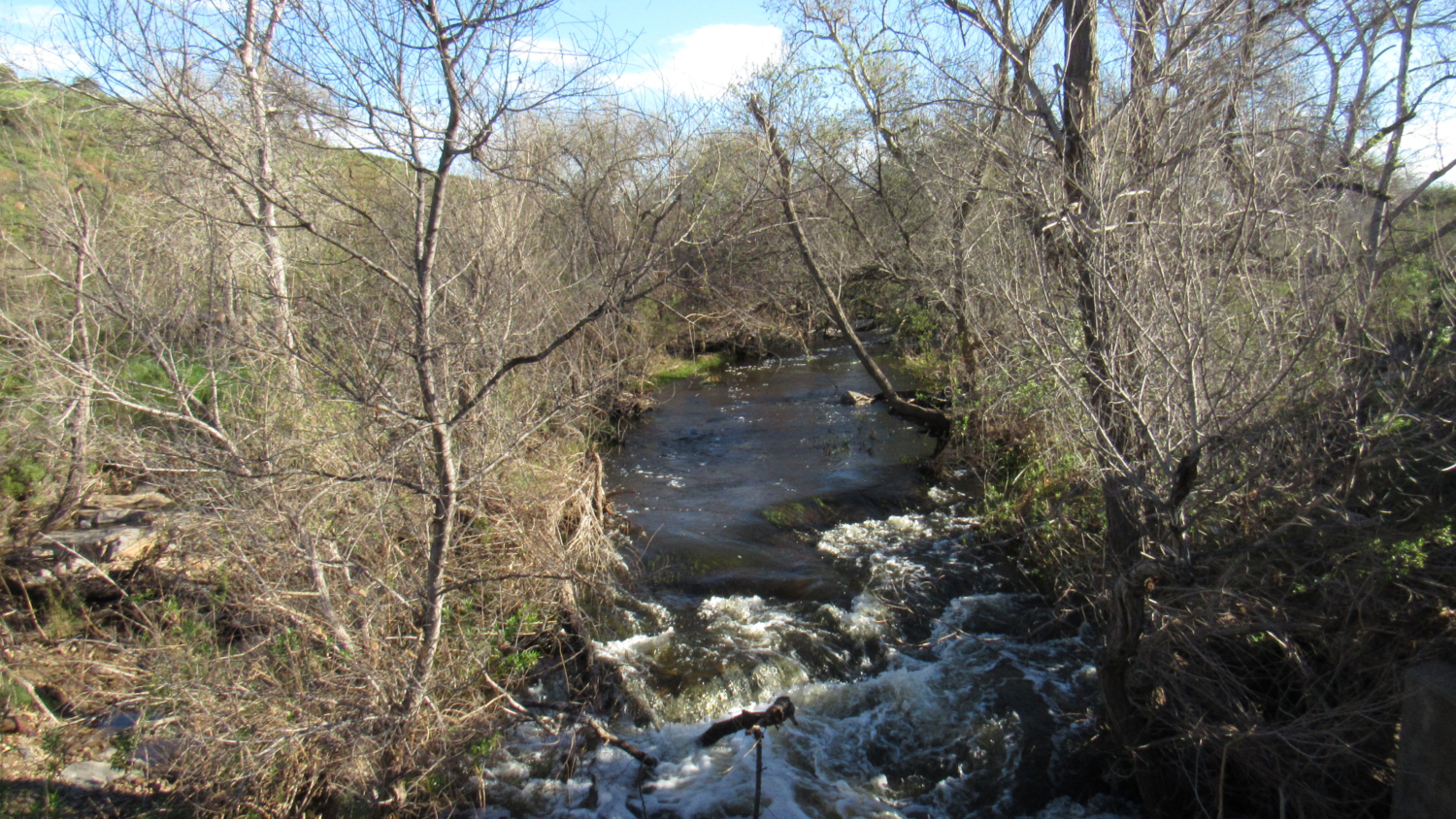 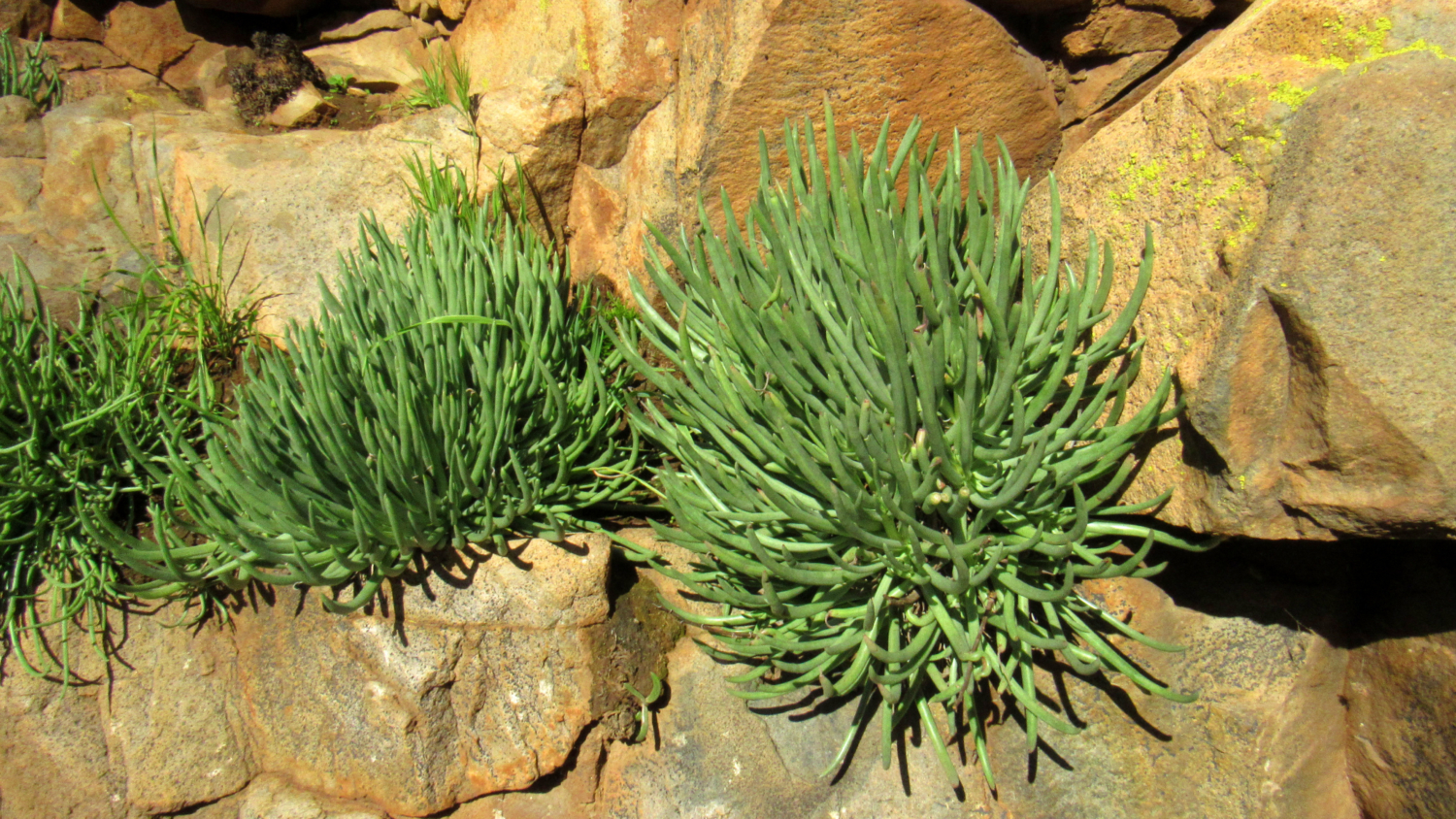 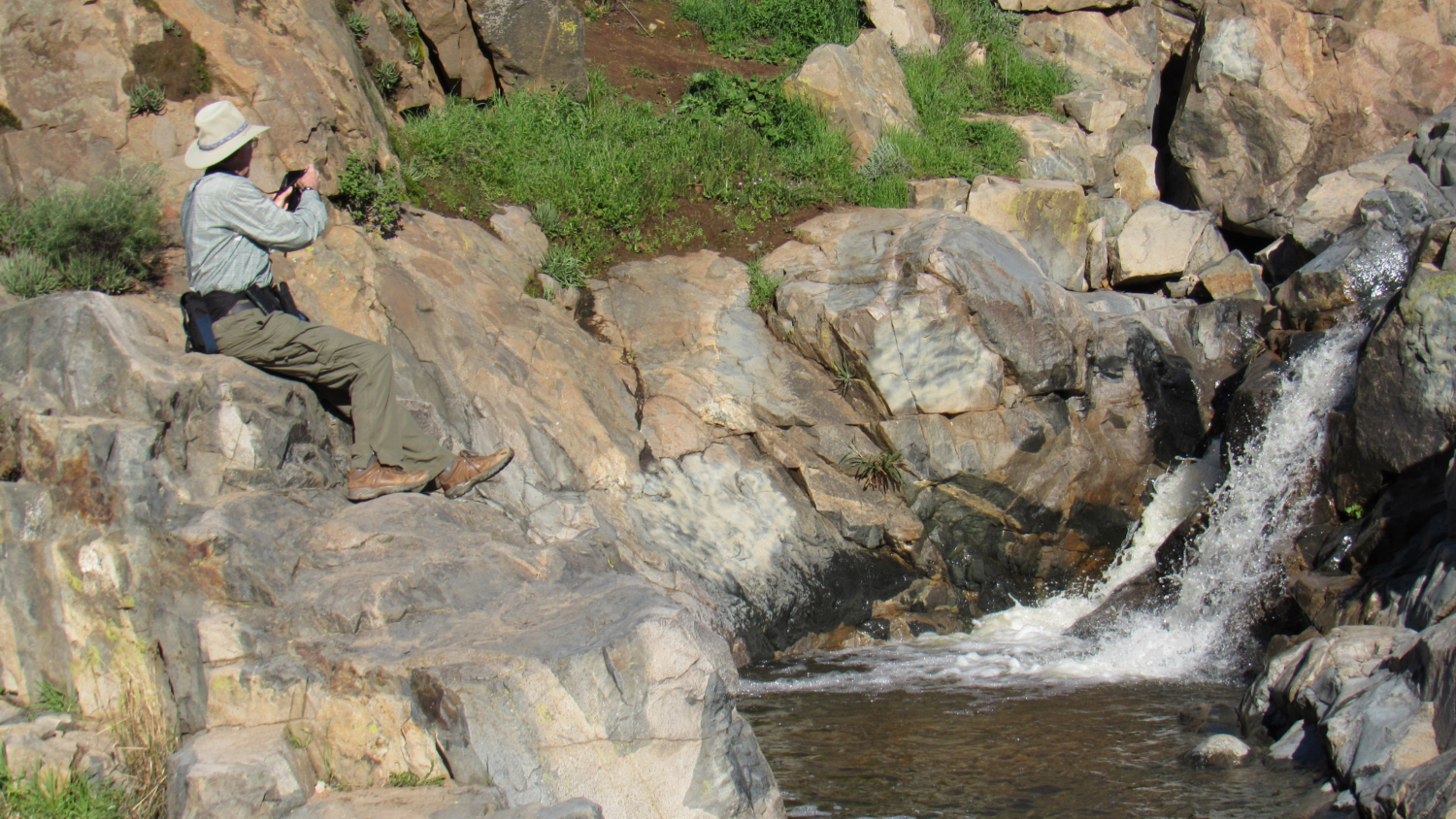 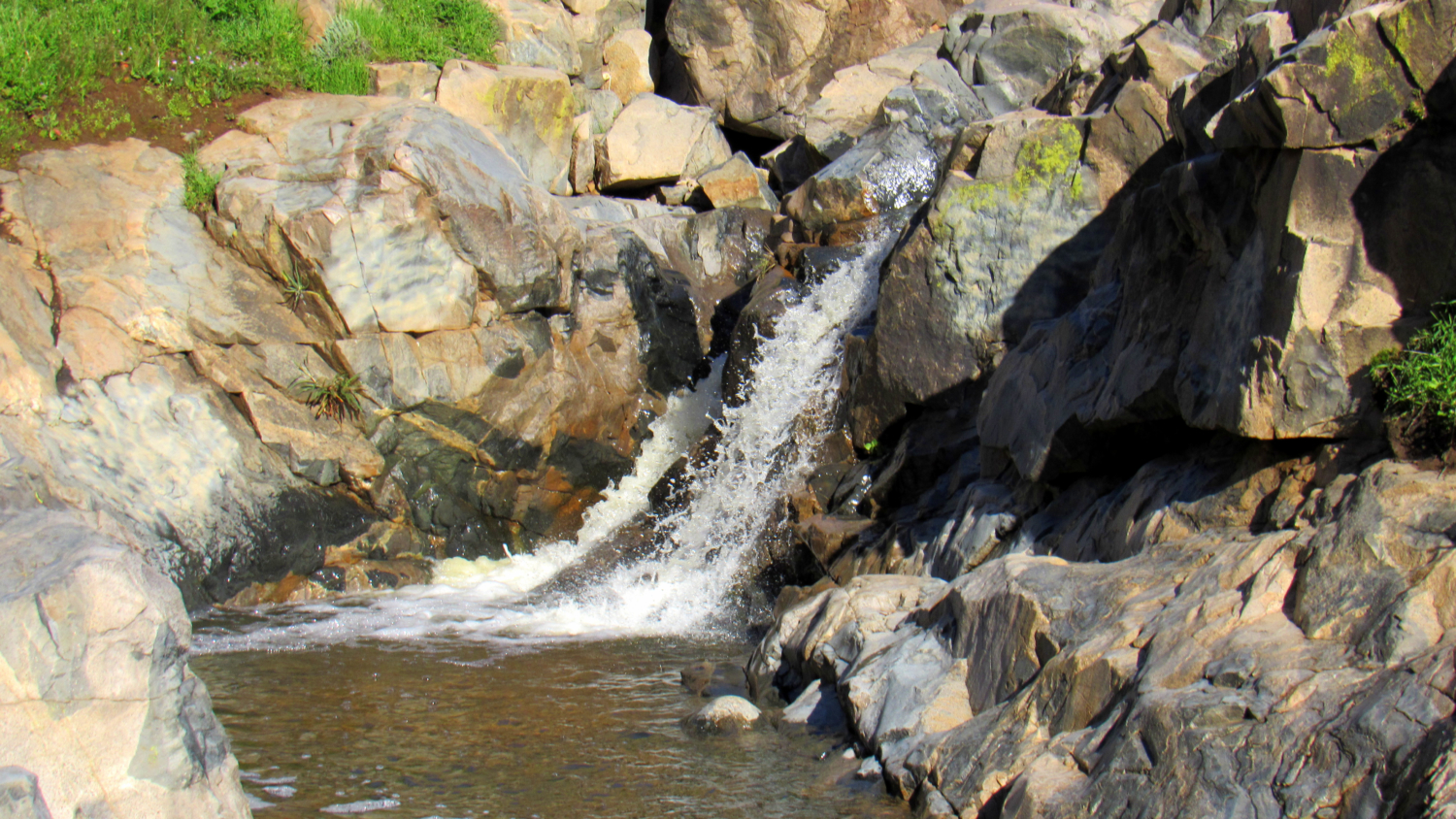 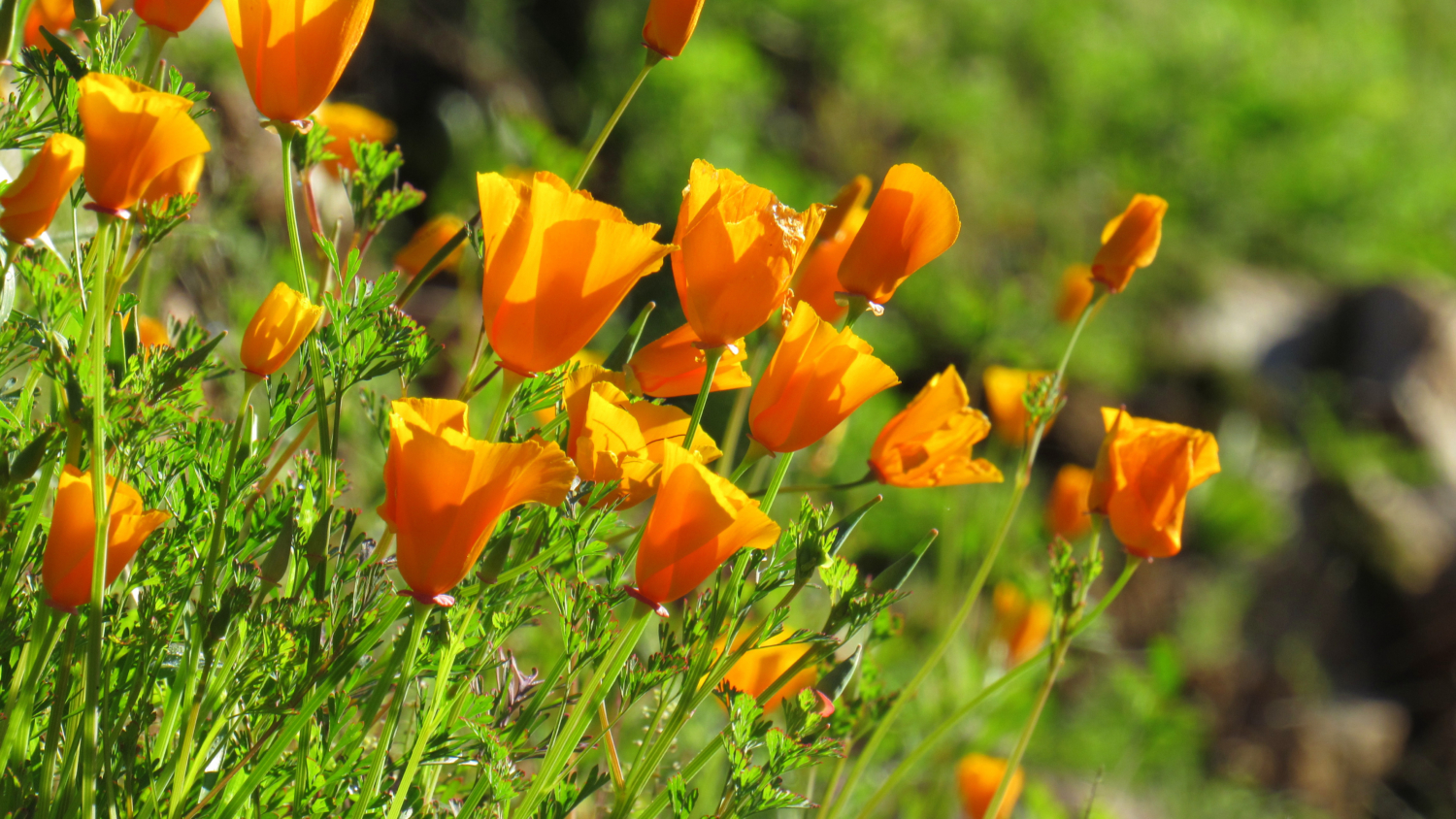 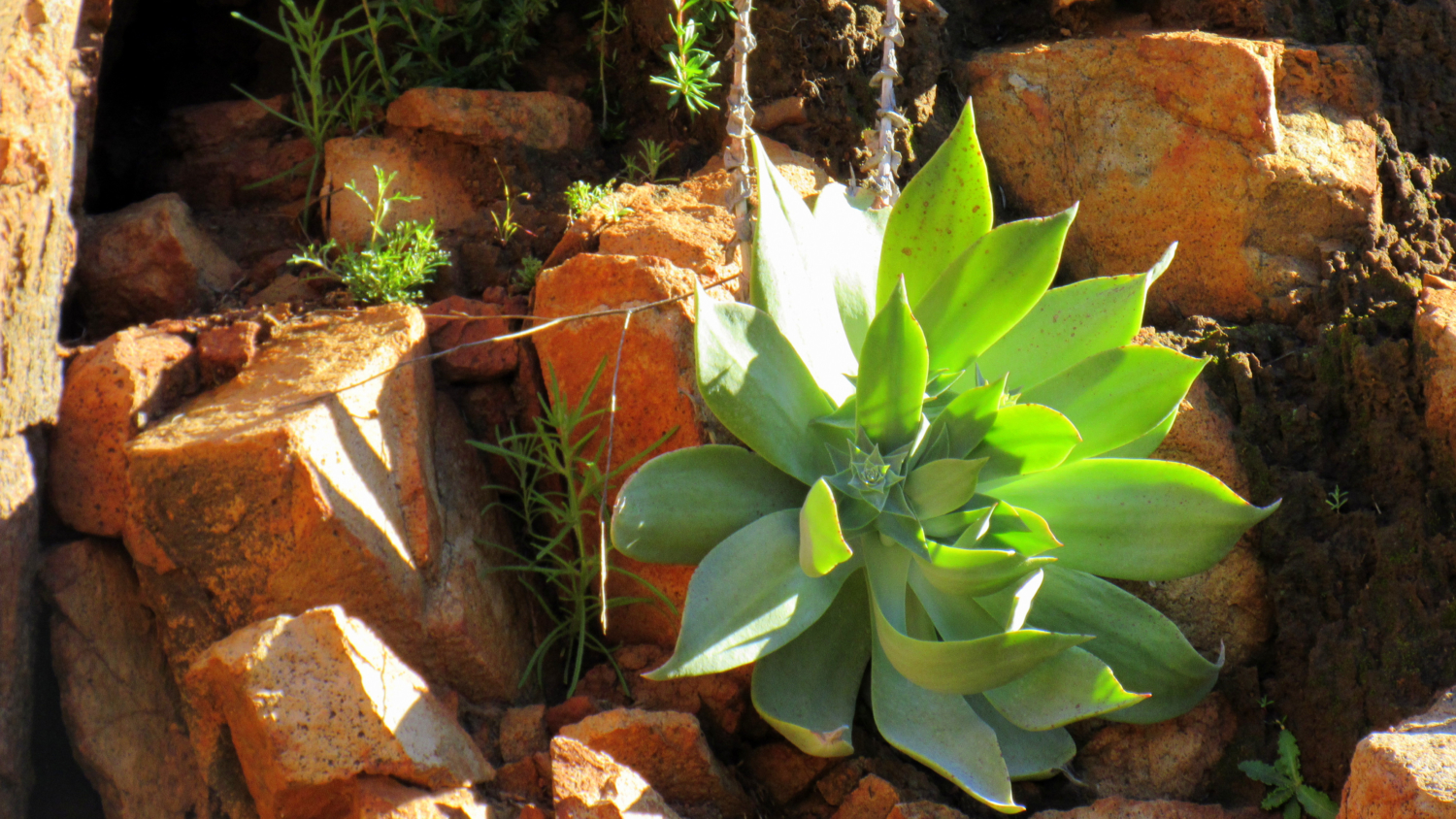 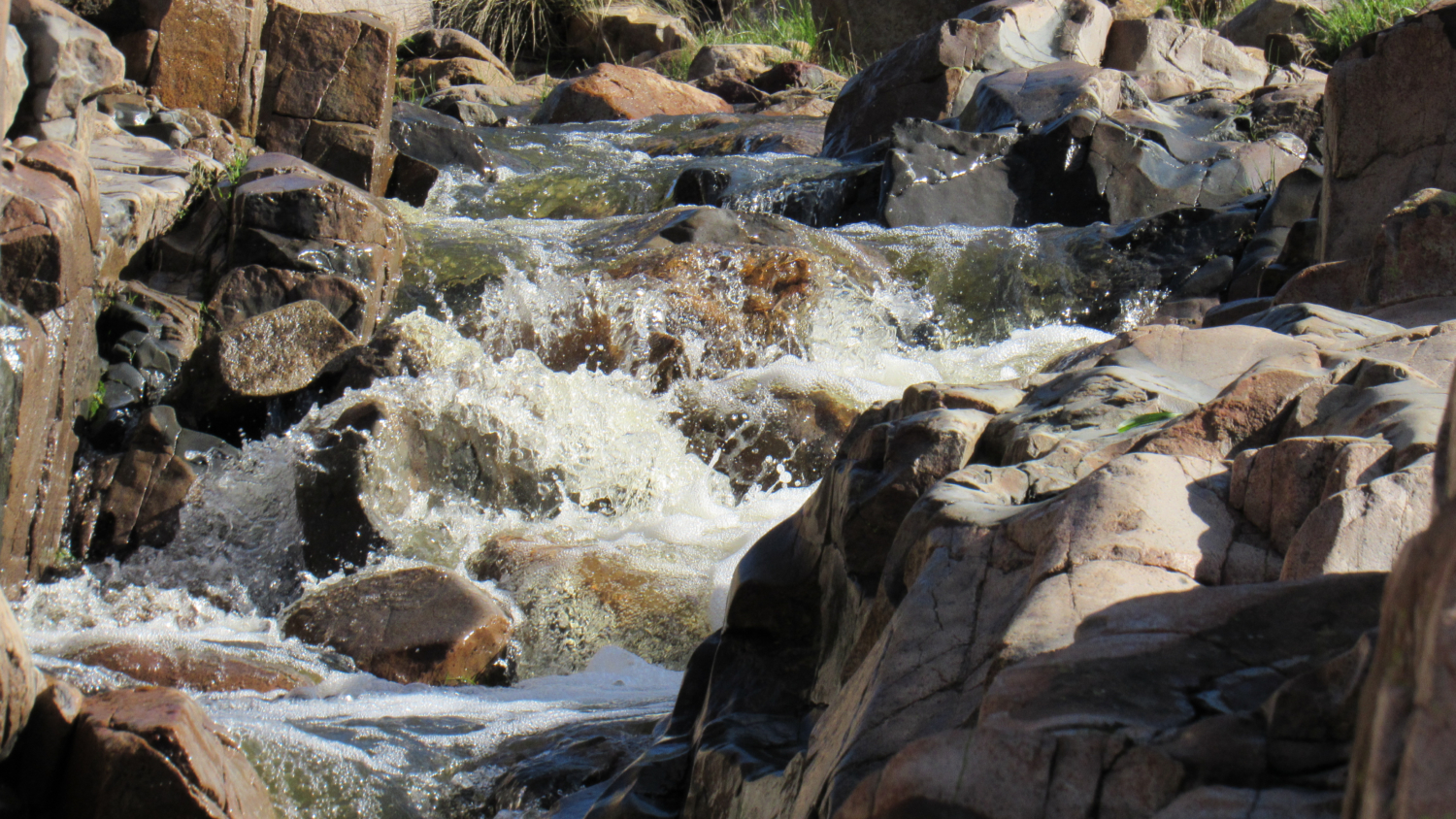 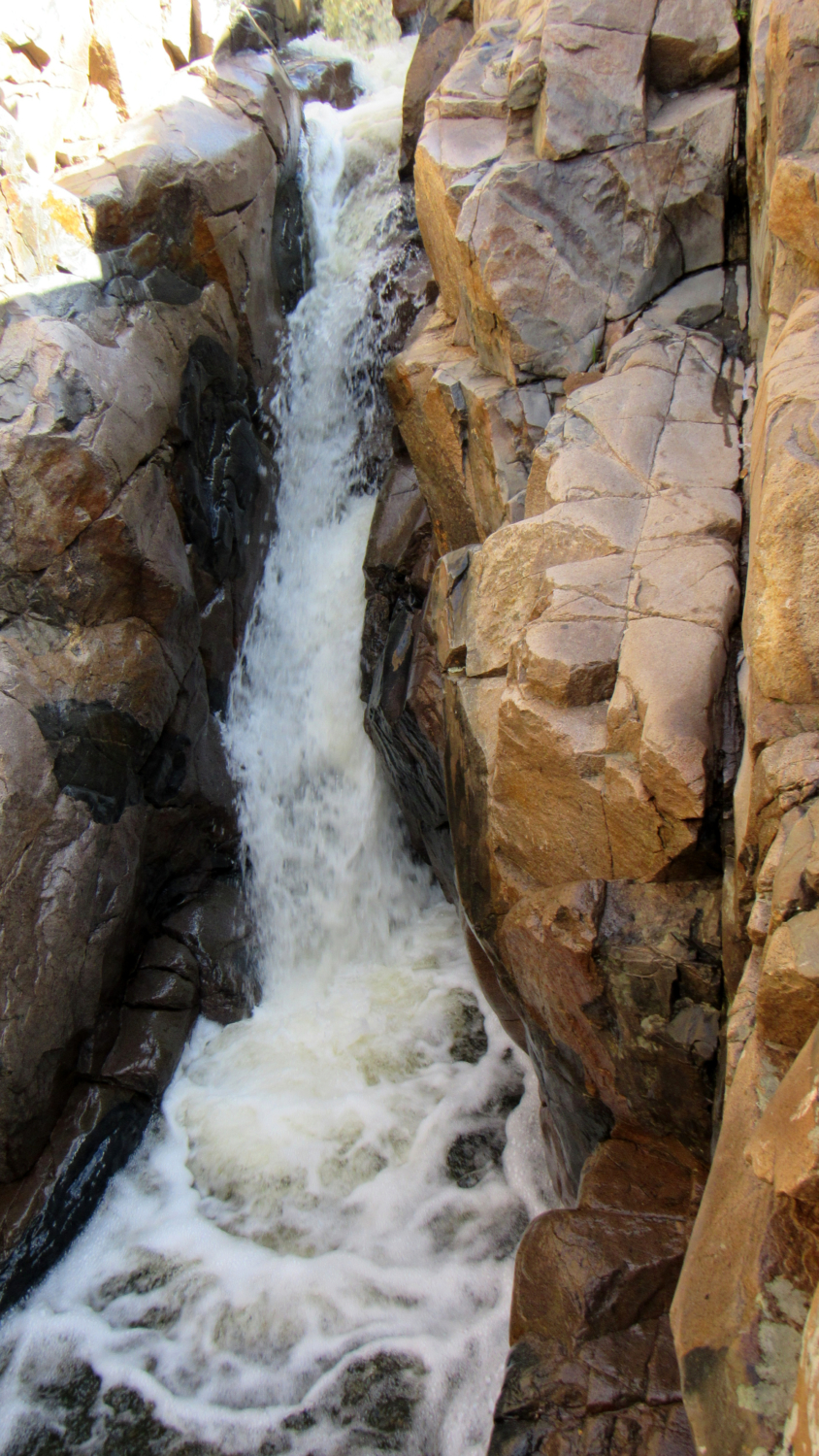 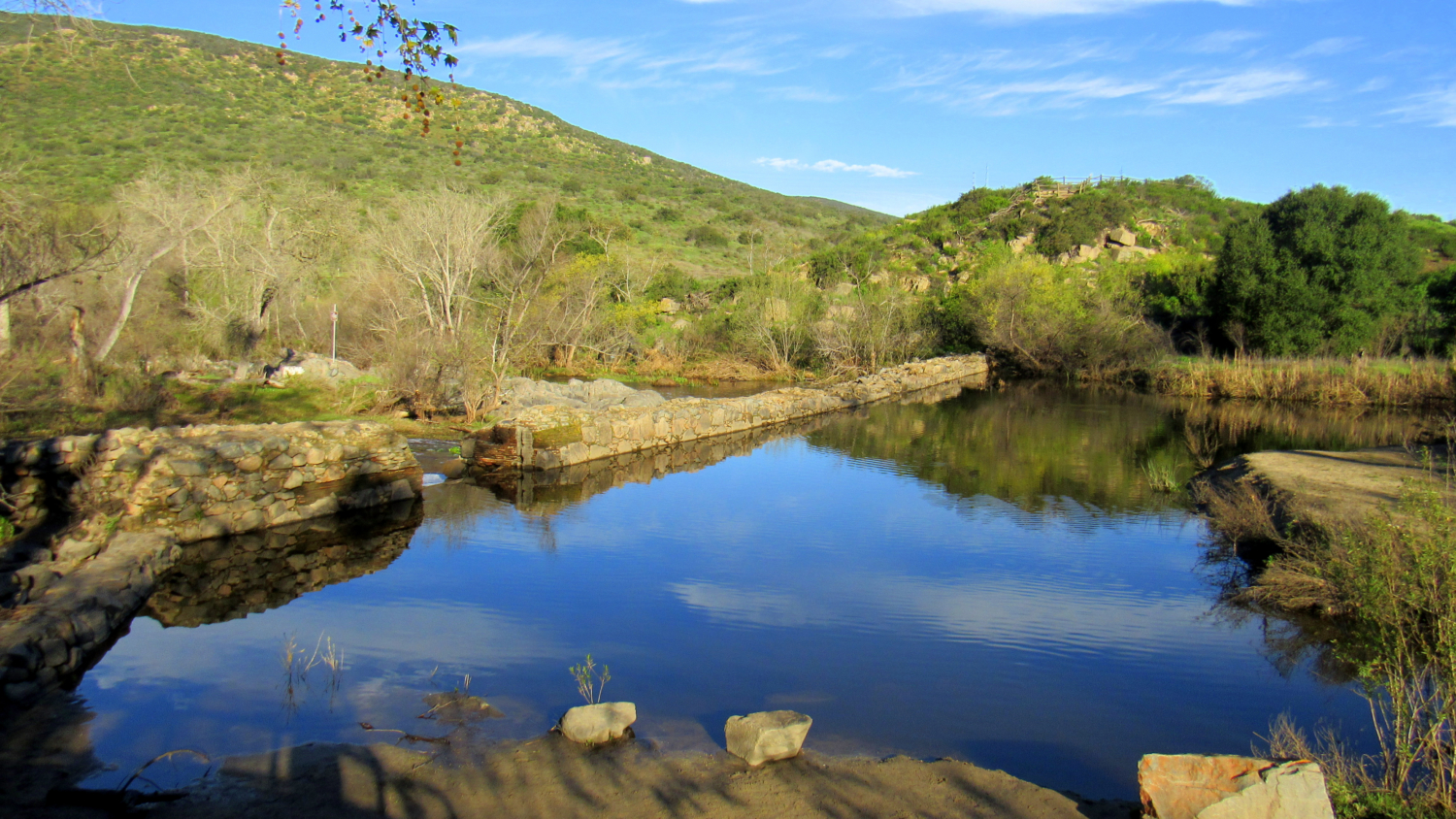 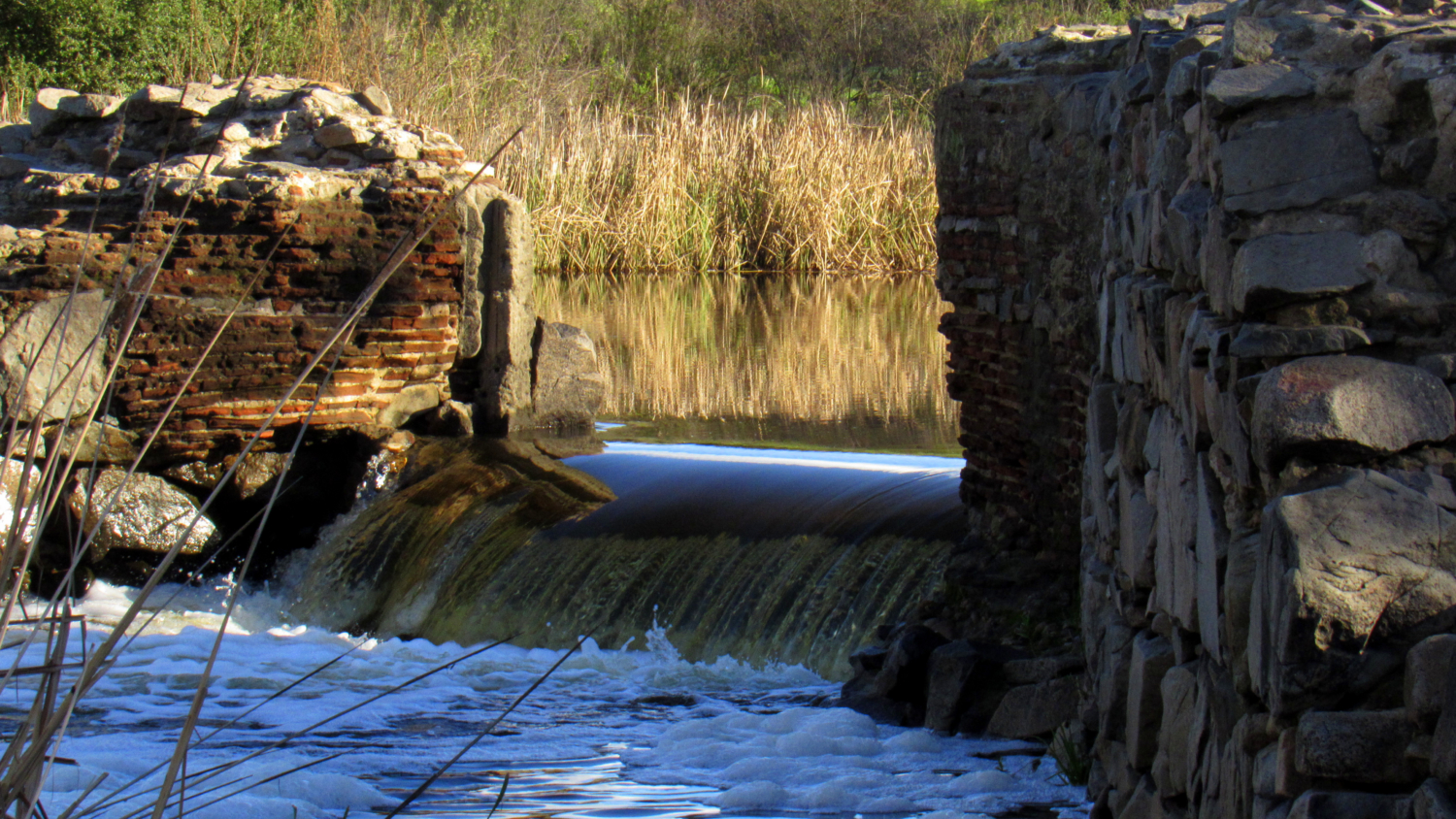 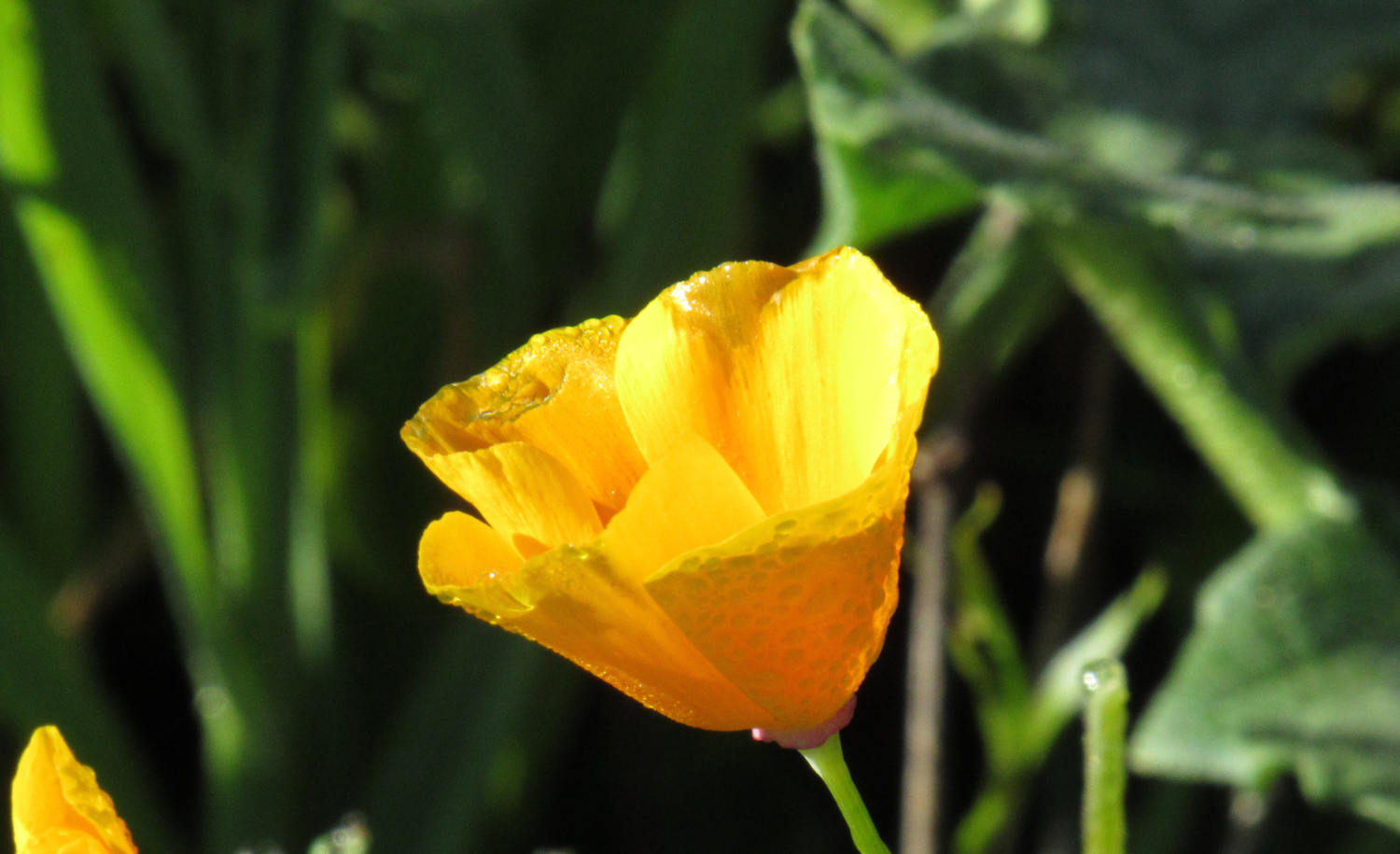 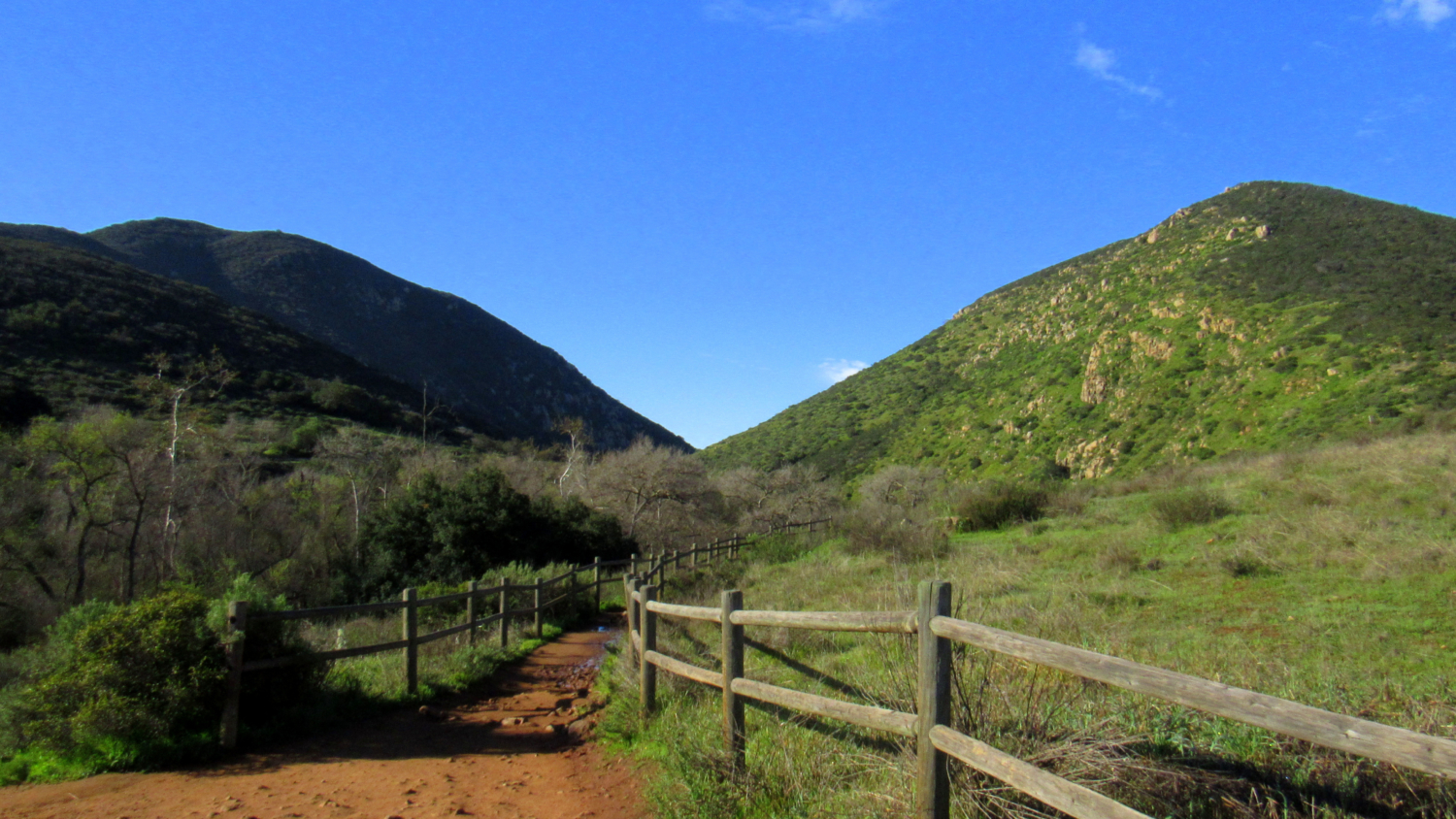 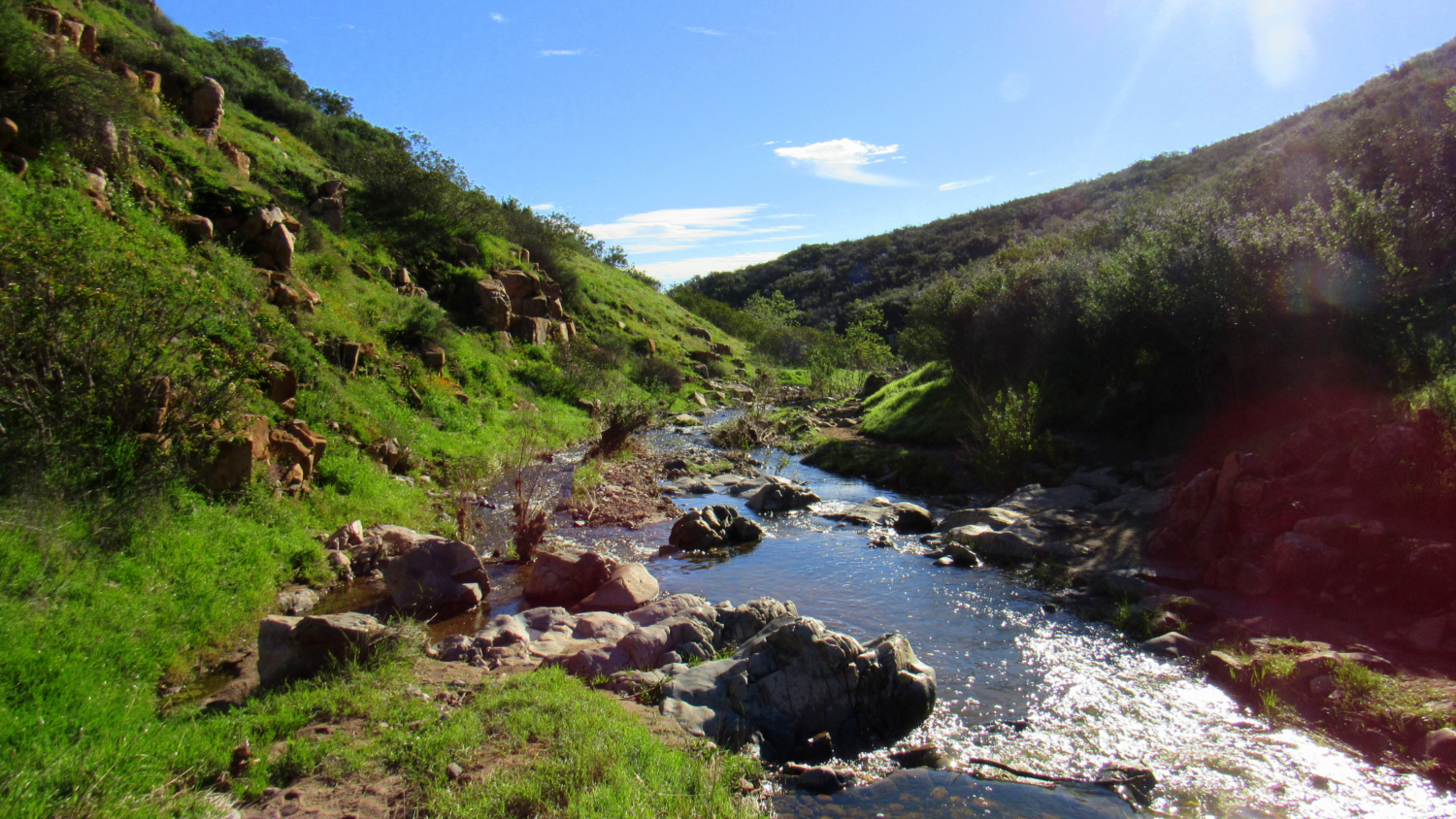 Although extremely well-traveled and easy to follow, the Oak Canyon trail has a few rocky spots and tricky creek crossings when the creek is flowing. Recent flooding (Feb 2017) washed out some bridges, although those could be replaced soon. The trail around the waterfall is fairly rocky and requires a bit of light scrambling.

Mission Trails has its own campground, Kumeyaay Lake Campground, which is a fine spot to camp and conduct extended exploration of the park.

Exit CA-52 at Mast Blvd, and head east on Mast Blvd. Make an immediate right turn onto West Hills Parkway and then make a second right turn onto Mission Gorge Road. After .1 mile, veer right onto Junipero Serra Road and continue west past Kumeyaay Lake Campground until a gate indicates that the road is closed to traffic. The Mission Dam Trailhead is on the right hand side just before the gate. Note that the gate just beyond the campground does not open until after 8 am.