One of the largest city parks in the world, Portland’s Forest Park is 5,157 acres of relatively intact and undisturbed Pacific Northwest forest. While many cities are home to wonderful park systems, Forest Park is unique for several reasons. First, for those interested in exploring its ridges and streams, it offers over 80 miles of hiking trails, most of which are well maintained and easily accessible from numerous trailheads. Second, while most city parks are devoid but all of a few native species to the area (as often happens when development and people move in), Forest Park is an exception. Large numbers of native birds and mammals still live in the park. Finally, even its northernmost trailheads are within 15 minutes from downtown Portland (in fact, from Powell’s City of Books it’s a mere 14 minutes drive).

Part of the reason why wildlife continues to do so well in the park is partially due to geography. Seen from above and looking towards the northwest, Forest Park is a corridor connecting the Tualatin Mountains (the main ridge line making up the park) with the wild and remote coastal range stretching to the west towards the Pacific ocean (see image below). Thus, animals are free to visit and leave the park at various times throughout their lives. The result? More than 117 species of birds, and 53 species of mammals have been observed living in or visiting Forest Park. In fact, many of the species still seen in Forest Park today were observed by Lewis and Clark in 1806.

As an aside: for those Angelenos familiar with the Santa Monica Mountains in west Los Angeles, Forest Park might offer useful insight on the value of wildlife corridors. While both parks contain ecosystem co-existing alongside human communities, the Santa Monica mountains are cut-off from the larger mountain ranges and uninhabited areas in Southern California by the large freeway system. As a result, the species are genetically limited in their reproduction, making their long-term survival more difficult. While Portland and Forest Park are undeniably smaller in scale compared to the challenges faced by more densely inhabited Los Angeles, it nonetheless makes a case for the value of connecting wildlife to large tracts of habitat.

Related: Read our interview with Beth Pratt-Bergstrom, who is one of the leading forces behind the Liberty Canyon Wildlife Crossing in the Santa Monica Mountains.

Beginning at the Forest Lane/Firelane 1 trailhead on the west side of the park, this 5.5 mile lollipop loop encompasses much of what makes Forest Park so wonderful. For much of its length, it follows a section of the Wildwood Trail, a pleasant and well-graded footpath (which in it’s totality runs 30 miles from the north to south ends of the park). It also visits a pocket of large douglas fir trees along Munger Creek, named for Thornton Munger, one of the founders of Forest Park. This small area wasn’t logged, and is a great example of a more intact Pacific Northwest forest compared to many other areas in Forest Park where more recent red alder and bigleaf maples dominate.

Starting at the gate across Firelane 1, you’ll walk along the wide dirt road for roughly .25 miles, passing the Morak trail junction on your right. The next large junction will be with the Wildwood trail, which as of April 2017 isn’t marked with a named sign (however, this is likely to change, and the junction HAS sign holders, see photo below). Turn left onto the Wildwood trail.

From here, you’ll stay on scenic Wildwood trail for a little less than two miles, as the trail heads deeper into the central section of Forest Park. While it’s easy to follow, this particular trail is also marked by blue diamonds placed on trees throughout its length just in case you feel like you’re losing your way. As the trail winds it way to the north, you’ll pass through several watershed ravines.

Like much of the park, this area is packed full of plant life. Cascade Oregon grape (Berberis nervosa) is abundant here, with it’s grape-like berries or fragrant yellow flowers depending on the time of year. It’s important to note that despite its name, it is in fact not really a grape. While a clever look-alike, the edible (very tart) berries aren’t much to enjoy. Native to the west coast and extending to the Rockies, Oregon grape can be found in almost every county of Oregon.

Another abundant plant on this trail is the Trillium flower (Trillium ovatum). Blooming annually during spring, they last only until the summer when their moist environments start to become drier. During the spring, they practically line the Wildwood trail and much of the parks in the Pacific Northwest.

At one mile from the beginning of your hike, the trail crosses the south fork of Rocking Chair Creek. After heavy rains, little cascades can often be seen along creeks such as this. From here, you’ll climb out of the canyon and through several more smaller ravines. 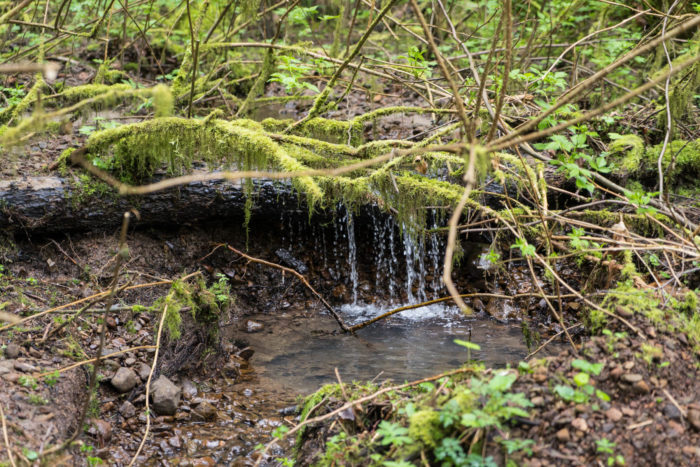 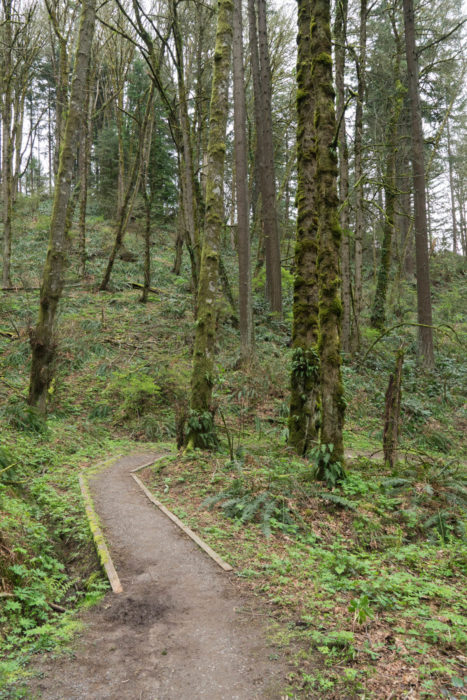 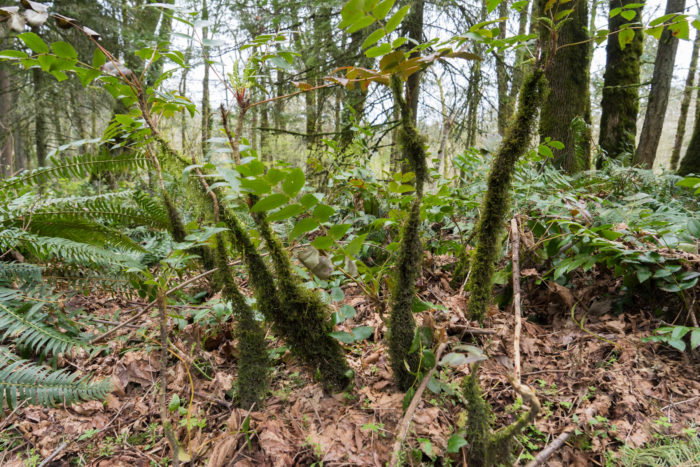 Continue straight pass the junction with the Chestnut trail, until you eventually reach Firelane 2. Stay straight on the Wildwood trail, traveling along a large hairpin turn before coming to a junction with the Maple trail. Turn right to begin the first part of our loop. Follow the Maple trail down several well-graded switchbacks to Munger Creek. Rock hop across this intermittent stream, and continue onward until you see a side trail heading uphill to your left (a sign will point “to Wildwood trail”). 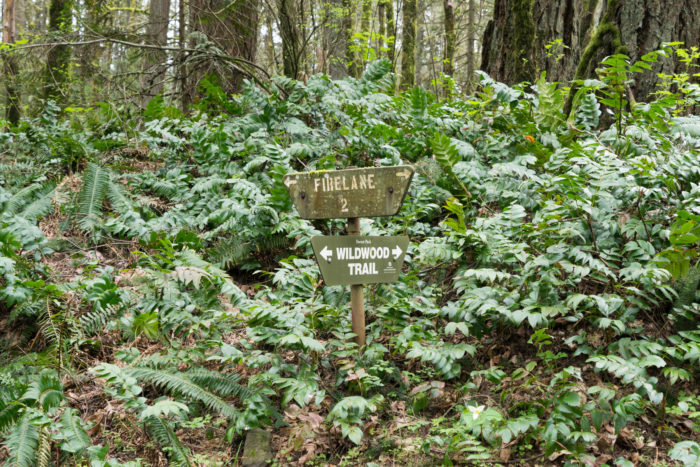 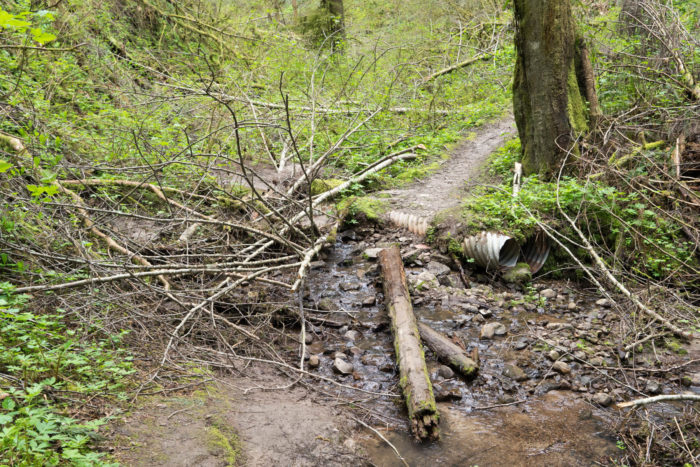 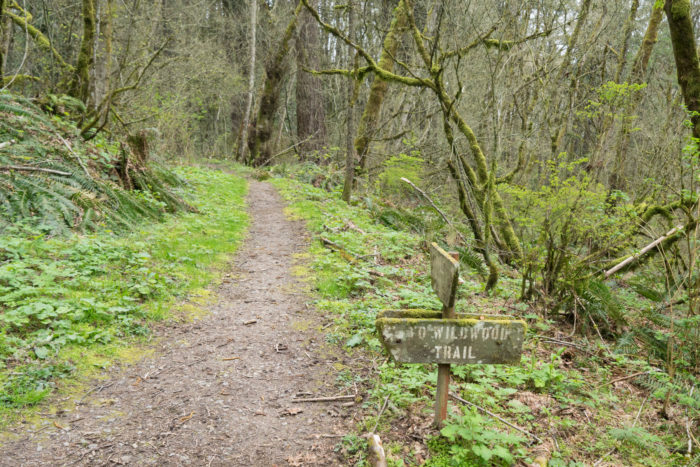 Stay on the very short Tye trail for only .1 mile, before meeting back up with the Wildwood trail again, at which point you’ll stay to the left. From this point, the Wildwood trail takes you back towards Munger Creek, but this time further up the ravine.

This section of the trail is characterized by a marked difference in the abundance of very large and old conifers. Several of the larger douglas fir are adorned with charred bark on one side, an indication of their age and longevity. There is something remarkable and breathtaking about this small pocket of old trees, reminding one of older Pacific Northwest forests before logging tore out many such specimens. Looking up, moss-covered tree crowns tower above your head, making for a great spot to stop and appreciate that you’re only 15 minutes from downtown Portland. 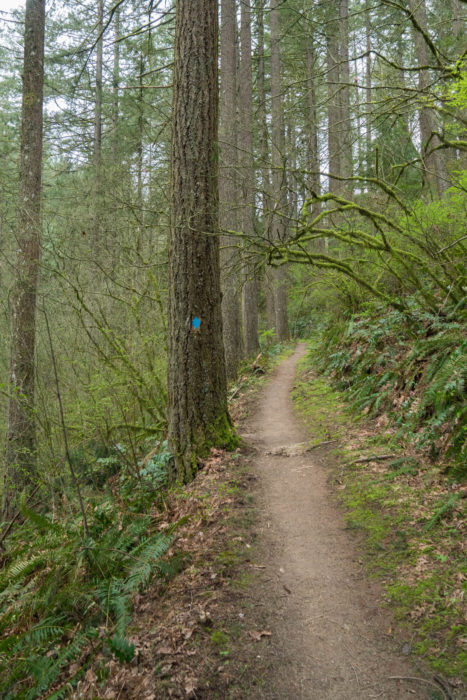 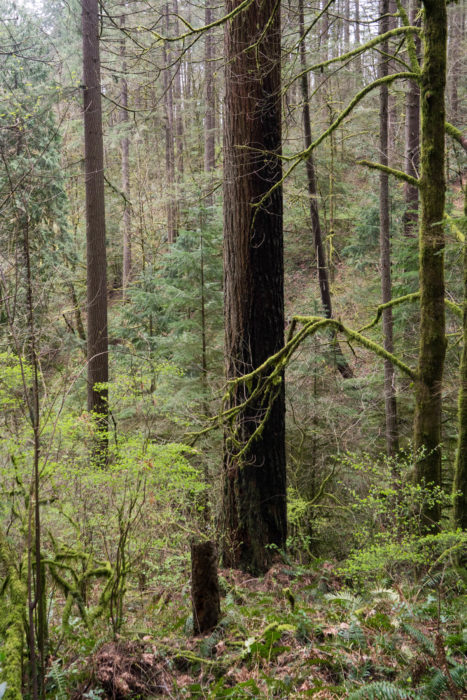 Stay on the Wildwood trail and cross several more small, seasonal streams until you again come to your previous junction with the Maple trail. This time, continue back to the way you originally came from, staying on the Wildwood trail to eventually again meet up with Firelane 1. Turn right and head uphill to the locked gate and your car.

Most trails in Forest Park are very well maintained. In spring, the Wildwood Trail can have muddy spots, so waterproof shoes are advisable. Almost all trails are well marked with large signs.

As a city entity, Forest Park offers no camping. However, great camping can be found an hour away to the east in Mt. Hood National Forest, or roughly 1.5 hours to the west in numerous parks along the Oregon coast.

Follow W Burnside St to NW 23rd Pl, where you will turn right. In one block, turn left onto NW Westover Rd. In roughly a quarter of a mile, take a slight right onto NW 25th Ave, and then immediately after a left onto NW Lovejoy St. In one block, turn loft onto NW Cornell Rd, which you'll then follow for about 2.5 miles through the hills to NW Thompson Rd. Turn right, and continue up for 1 mile. Turn right onto NW 53rd Ave, and then your first left on NW Forest Ln. Drive until the gate.