When the weather west of the Cascade Range gets you down, a visit to Central Oregon’s Smith Rock State Park may be just what you need. In a setting that seems more Utah than Oregon, this relatively small park packs an enormous punch, with awe inspiring cliff faces, Bald Eagle sightings, the aptly named Crooked River, and big views of the cascade peaks to the west. While mainly known by climbers for its numerous routes, the park also offers a great, well-maintained trail system, where one can enjoy WATCHING elite climbers from the safety of the ground. 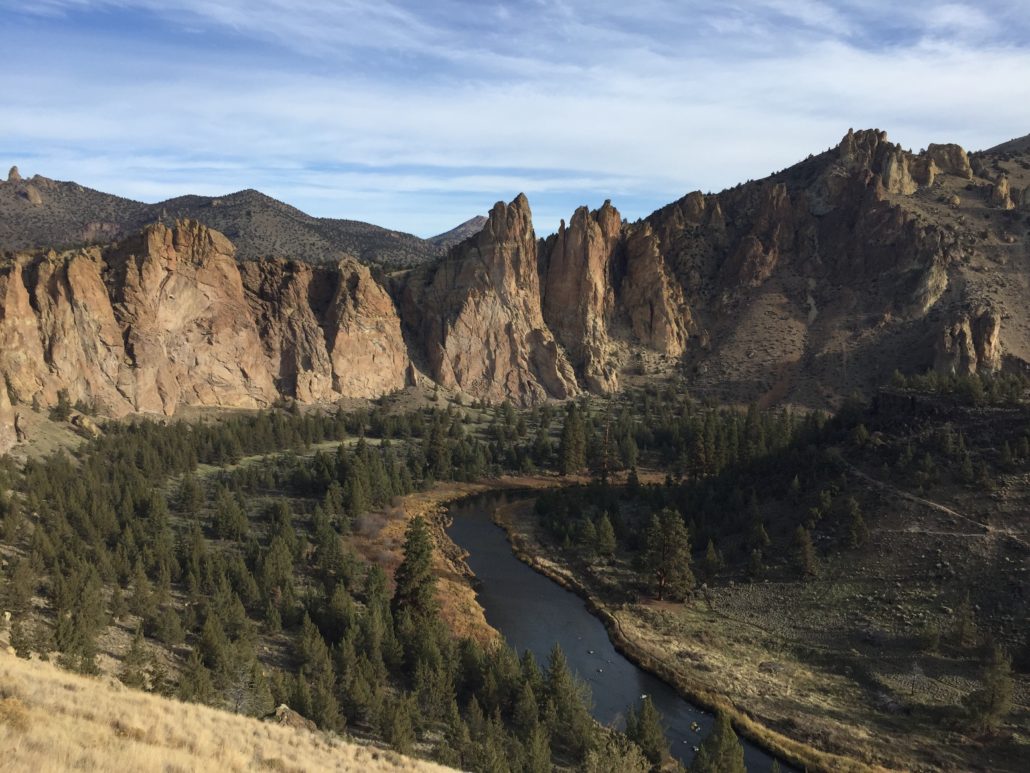 The Misery Ridge trail is a 5 mile loop encompassing all the best aspects of Smith Rock: big views, big rocks, and even a leisurely walk along the river. It makes for an excellent day trip, with just enough leg burn to make the climb to your new favorite lunch spot worth it. While the itinerary for this trip starts at the bivouac campground (a walk-in only campground with cliffside sites), the loop can be accessed from other parking areas along the main road into the park (the park provides a great map, including trails and climbing areas). If you are starting at the campground, your trail begins just behind the bathroom area. 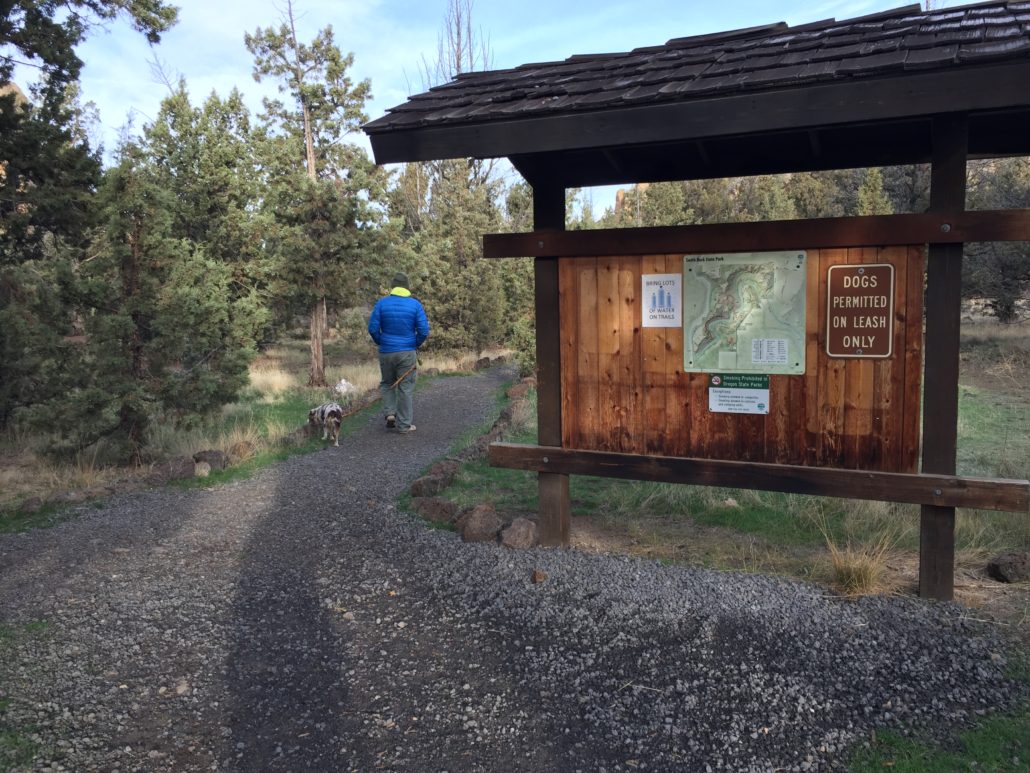 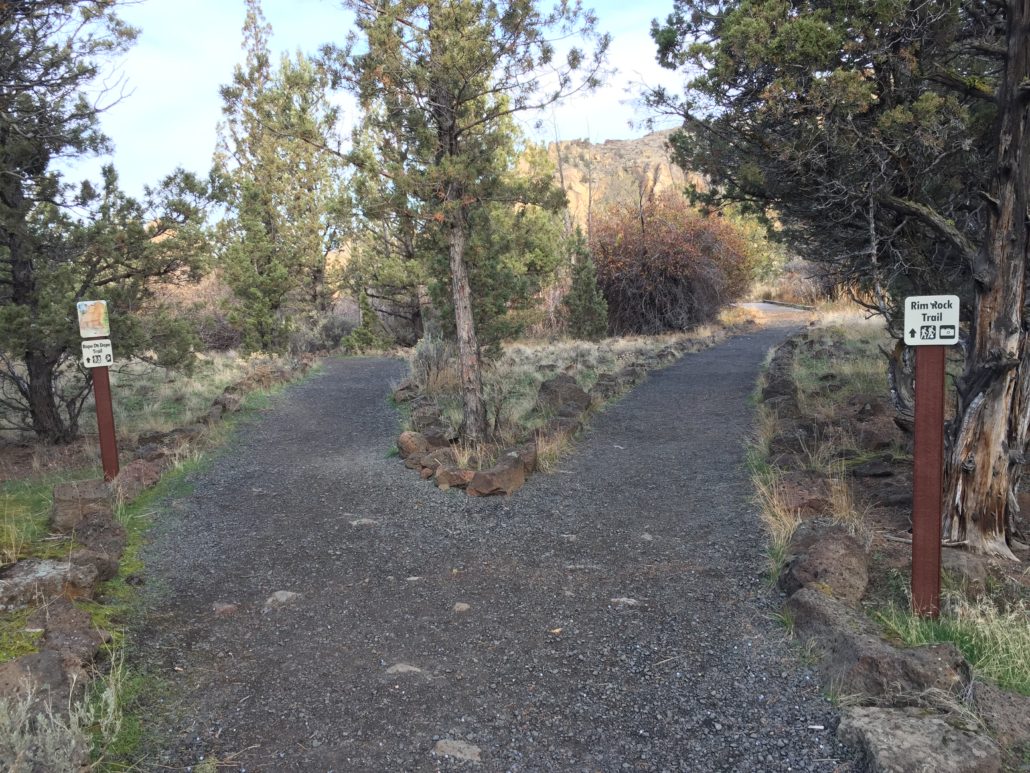 Shortly, the trail emerges onto a well graded gravel path where visitors can take in one of the loveliest views in all of Oregon (in my opinion). Continue along the mellow Rim Rock Trail for another half mile, passing the park Visitor Center, native garden, and more parking opportunities. 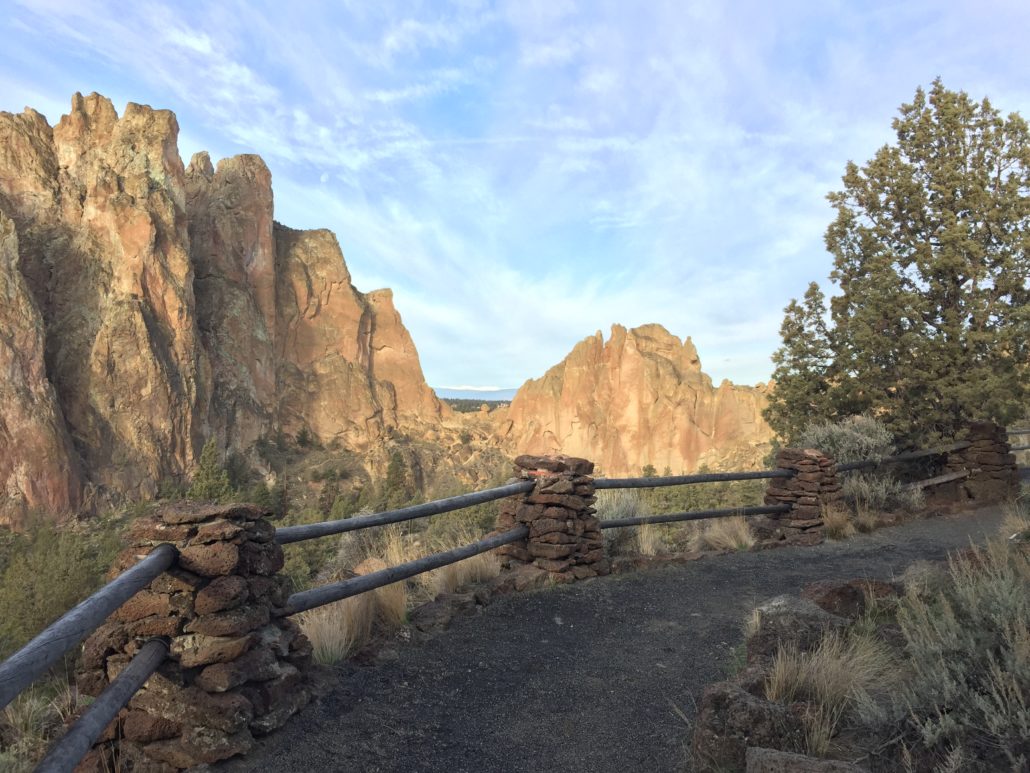 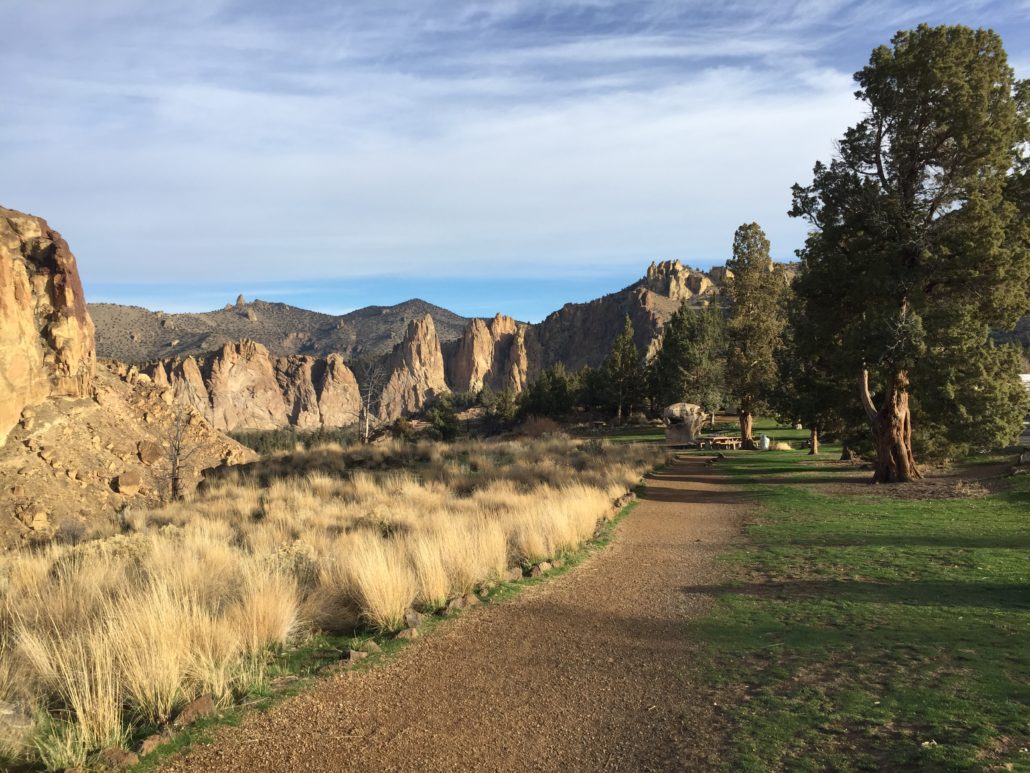 At .75 miles into the hike, you’ll reach the top of the Canyon Trail. From here, you’ll be taking the paved path down toward the river. This is also a great spot to take a break while trying to find tiny climbers up on the big walls. Looking over the river, you’ll also spot where we’re headed. 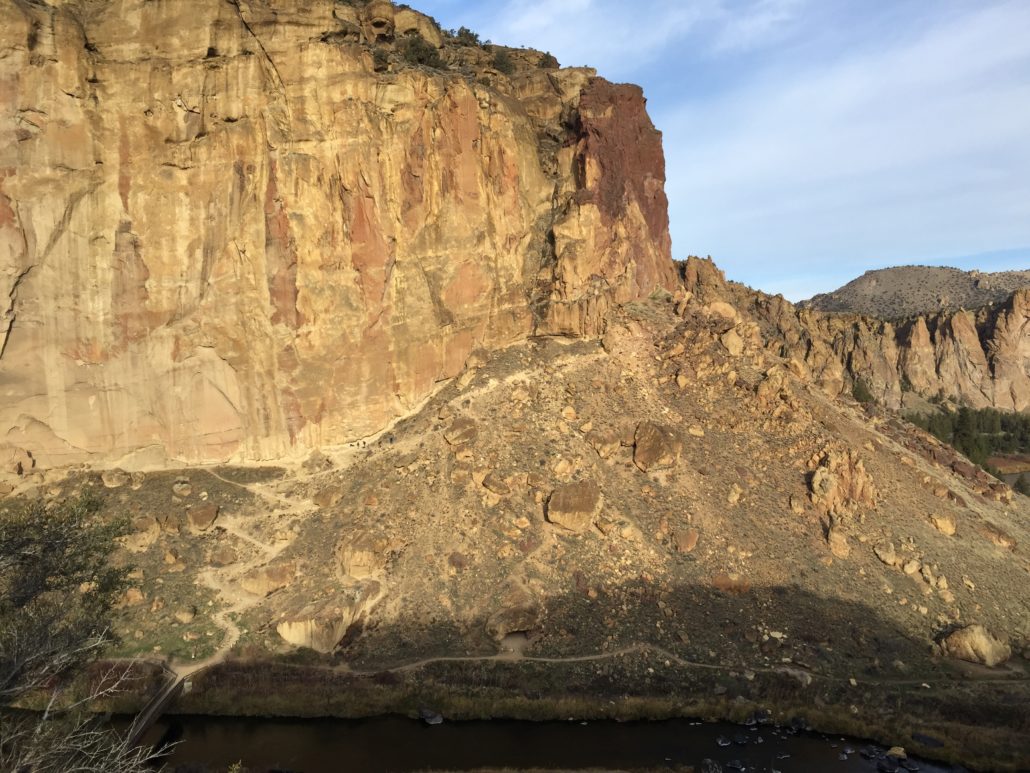 See that trail switchbacking up towards the rock? You’ll be there soon!

Proceed down the Canyon Trail for .5 miles, where you’ll reach an intersection with the Homestead Trail. Continue straight over the bridge. 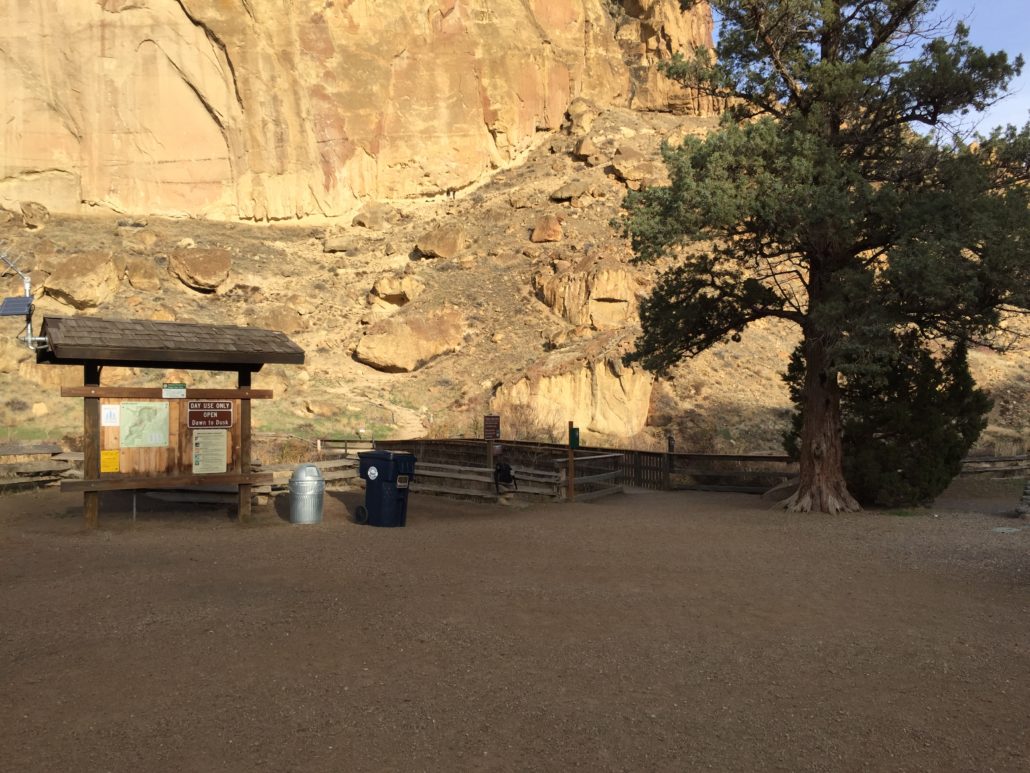 Immediately after crossing the river you’ll reach another trail junction. Again, you’ll go straight, heading upwards on the Misery Ridge Trail. You’ll stay on this track for the next mile, taking in breathtaking views of the canyon and the Cascade peaks to the west, all while feeling a pleasant burn in your legs as you realize that there MIGHT be an element of truth in this trail’s name (trust me, it’s well worth the climb). There are ample opportunities to rest and drink water, especially during the summers when temperatures can get toasty. 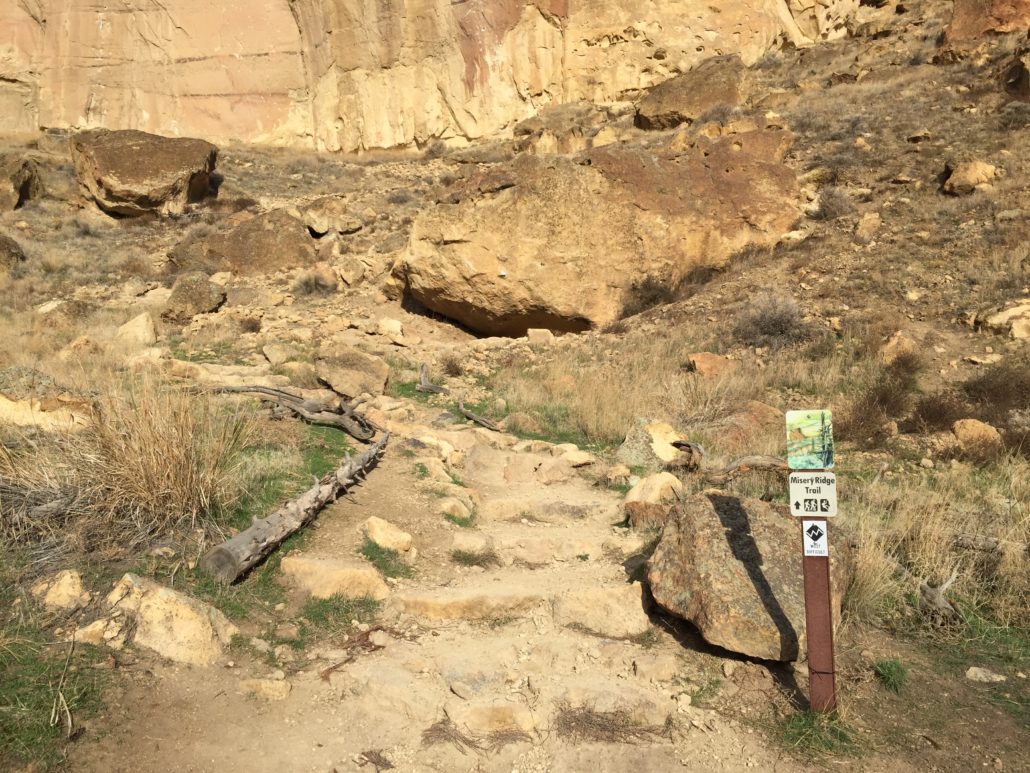 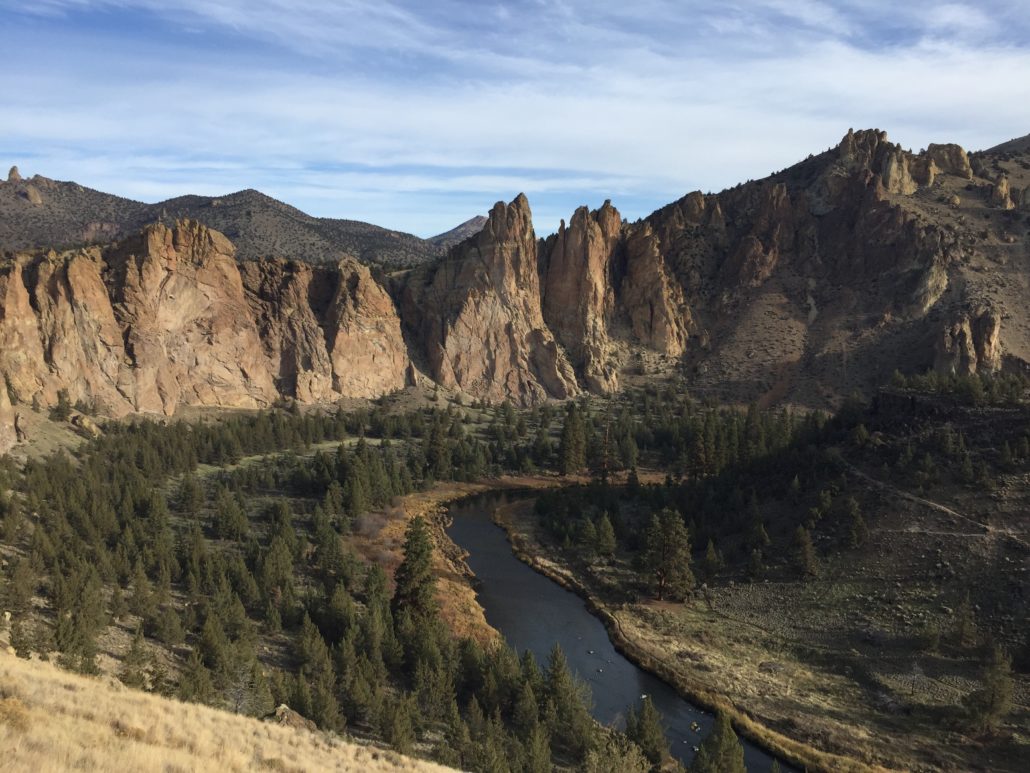 At a half mile into the Misery Ridge Trail, you’ll reach the summit of today’s hike. At this point, there are numerous spots to sit down, take a break, and enjoy some truly spectacular views. Follow the sign to continue along and over the ridge, where on a clear day, you’ll be greeted by numerous snow capped cascade peaks. This is also a great spot from which to observe Bald Eagles (who live in the park year-round), as well as Peregrin Falcons, one of the fastest animals on the planet (diving at more than 200 mph!). From early spring into mid-summer, several climbing routes are annually closed due to nesting populations of raptors, including Golden Eagles, Bald Eagles, and Peregrin Falcons (if you’re interested in current closures, check here) 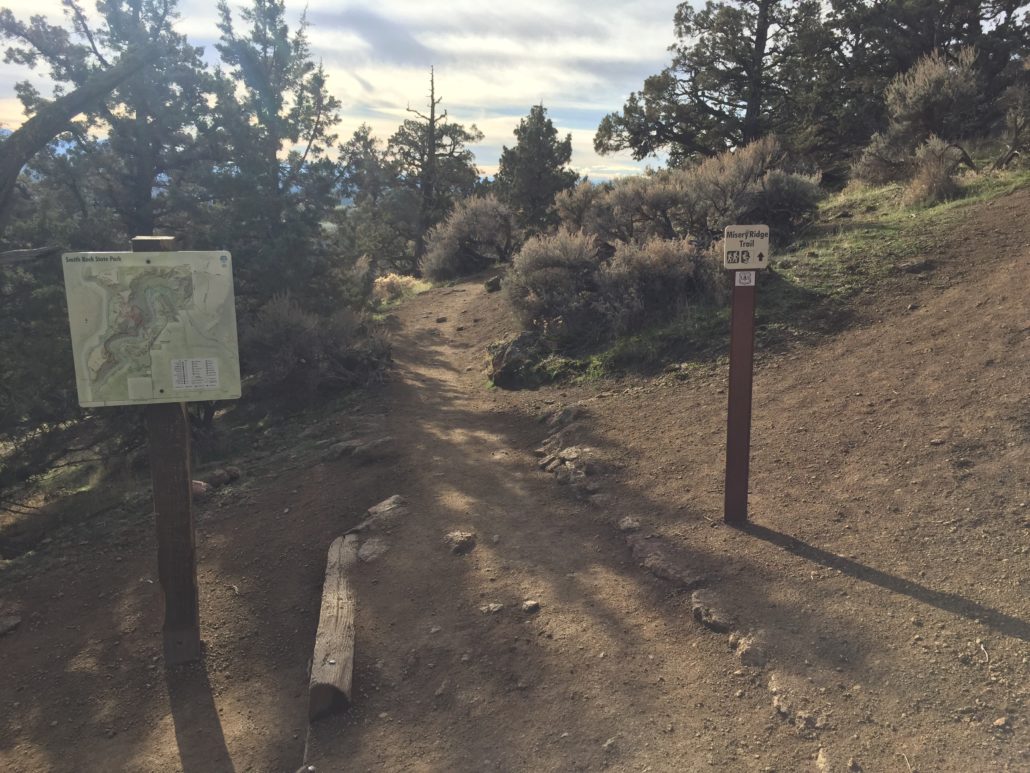 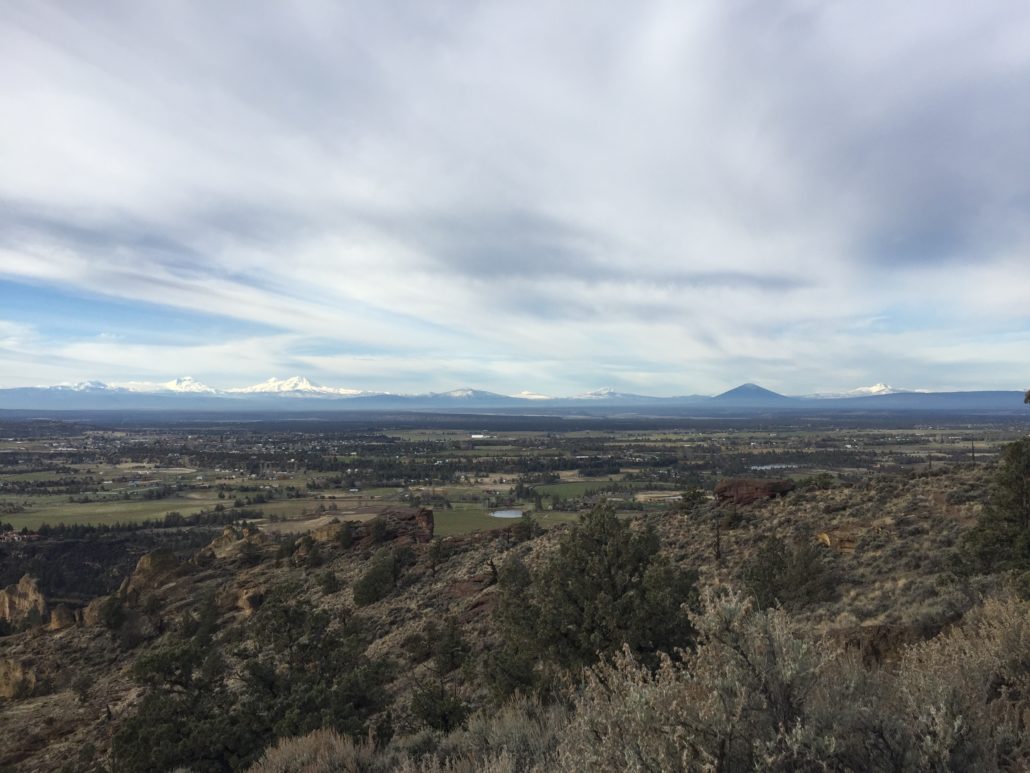 Staying on the same trail, you’ll pass over the ridge and eventually begin to descend the backside back towards the river. From here, you’ll have a prime view of 350 foot Monkey Face, a rock spire first climbed in 1960. If you’re lucky, you’ll be able to watch climbers attempt to scale the rock face, a truly impressive feat to witness. 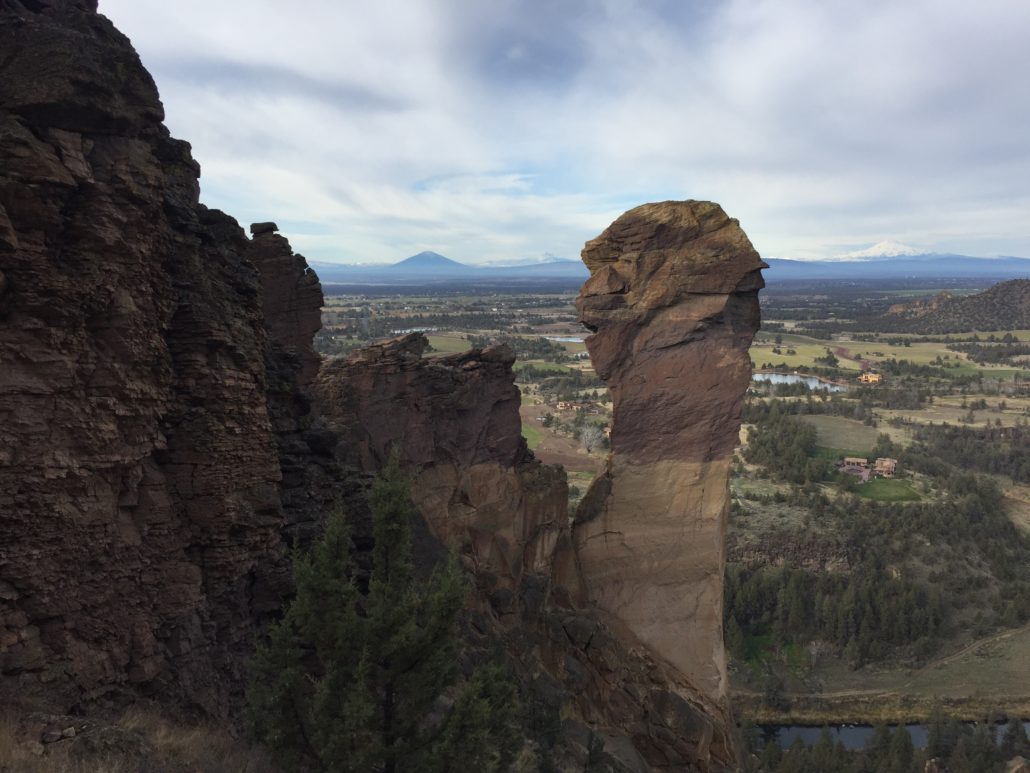 Monkey Face and Mt. Jefferson to the right.

The trail now steeply drops to the river on a series of switchbacks. While this section is generally well graded, some care should be taken on the steeper sections. Eventually, you’ll meet up with the Mesa Verde Trail just above the river, where you’ll take a left and continue onward. 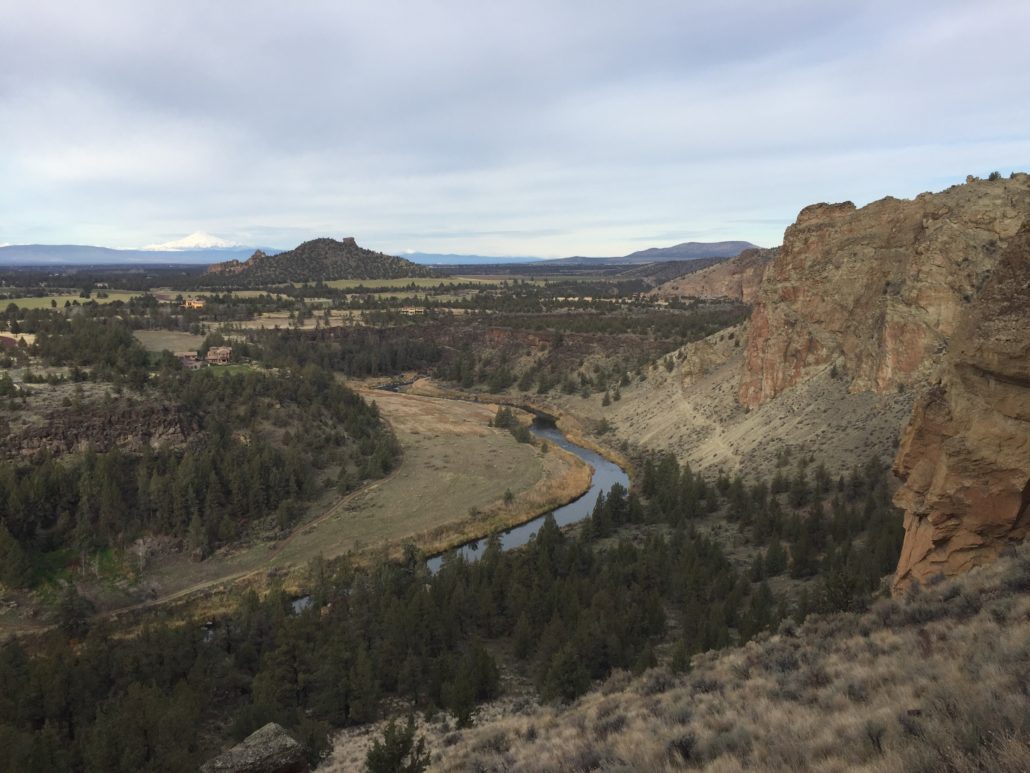 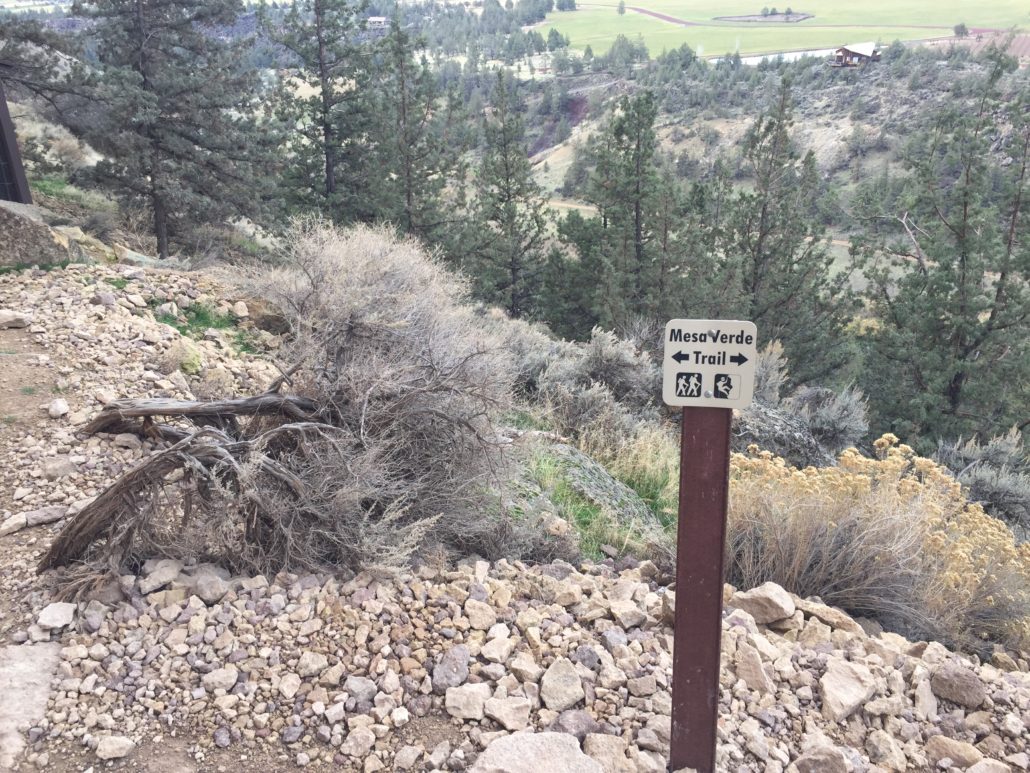 Follow the Mesa Verde Trail as it gradually descends to the river over the next .4 miles. This is another great area to watch climbers as you follow the Mesa Verde wall on your left. Eventually, you’ll reach the junction with the River Trail, which you’ll be taking all the way back to our earlier bridge crossing. This time, you’ll simply follow the river as it bends and weaves it way around the giant rock spires. Take a left on the River Trail, which compared to our previous climb, is a flat and mellow walk along the banks of the Crooked River. 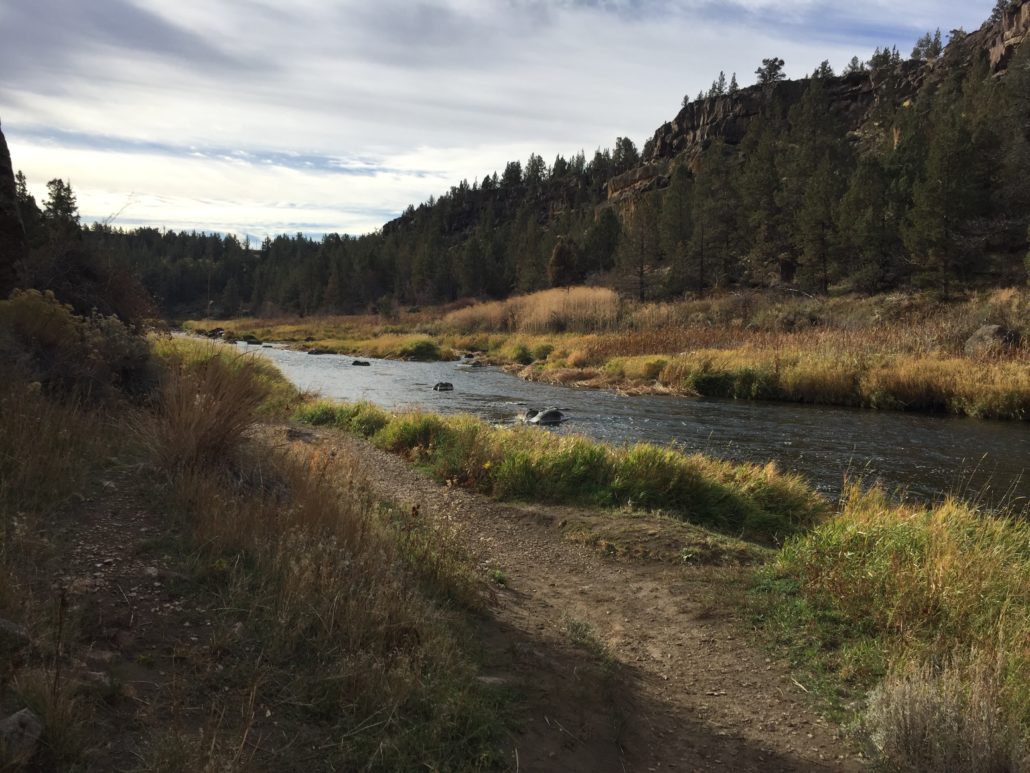 This section of the trip offers fantastic opportunities to observe water fowl as you follow the path of the river. Also, as you guessed, more climbers can be viewed on numerous routes in this area. Continue on the path and you’ll eventually meet up with the Canyon Trail again, where you’ll cross the bridge and head back up the hill to the canyon rim. 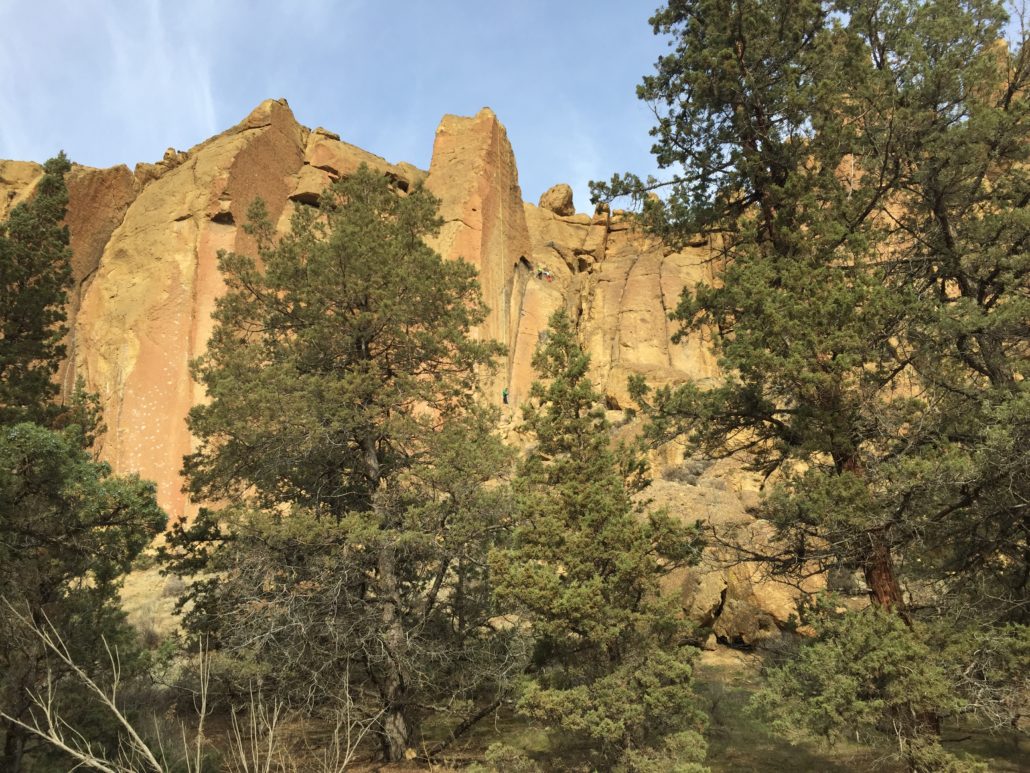 See the tiny climbers near the top? 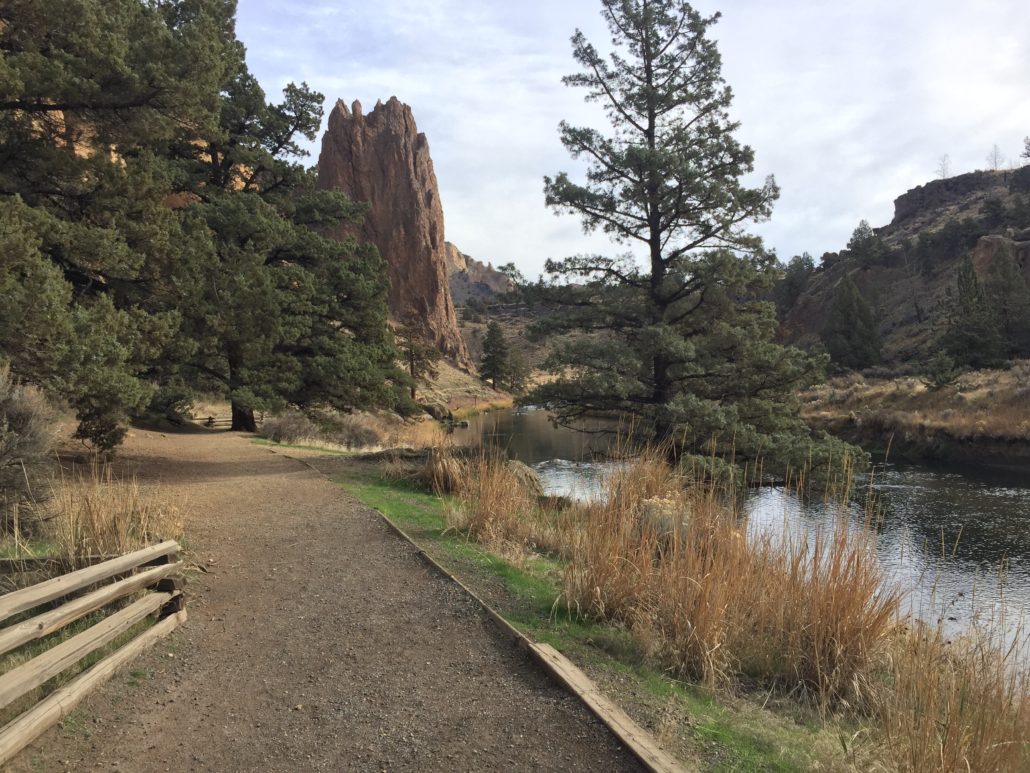 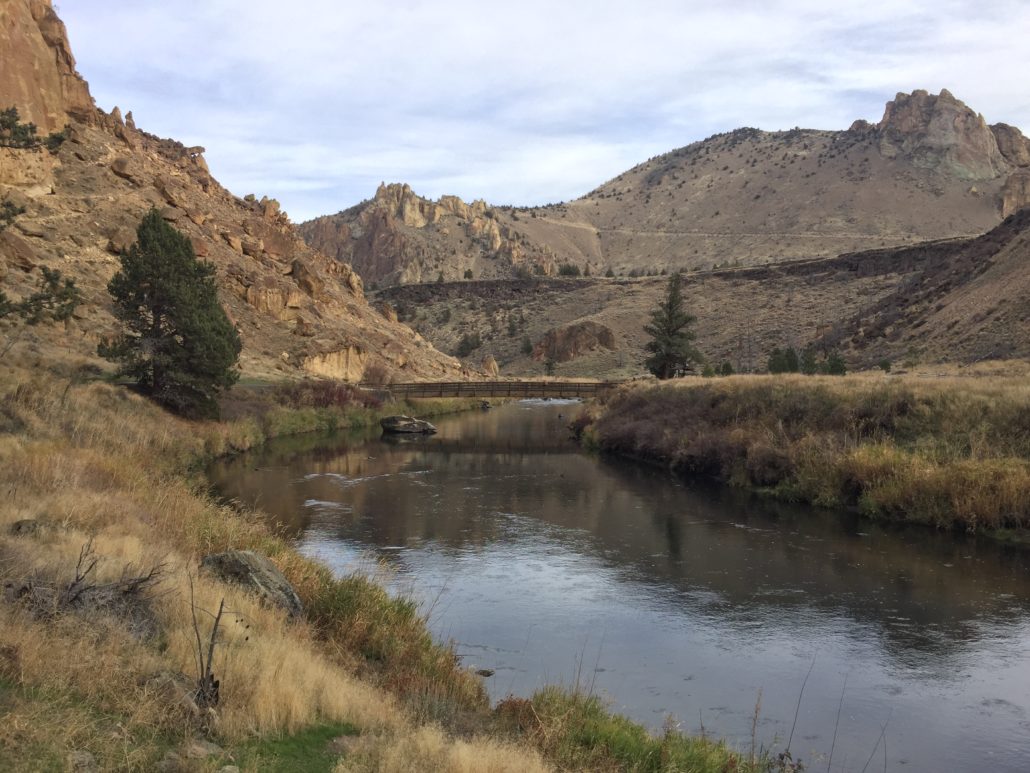 From here, you’ll simply retrace your steps back to your starting location, whether that be the campground or the other parking areas along the Rim Rock Trail.

–Map: I’ve found this map provided by Oregon State Parks to be great.
–Weather: Look at conditions before you go! While it gets very warm during summer days, the high desert of Oregon can also be very cold during the winter. Smith Rock is a great place to visit during the winter, but plan for possible ice and freezing temperatures (but on the plus side, you might have the place all to yourself). 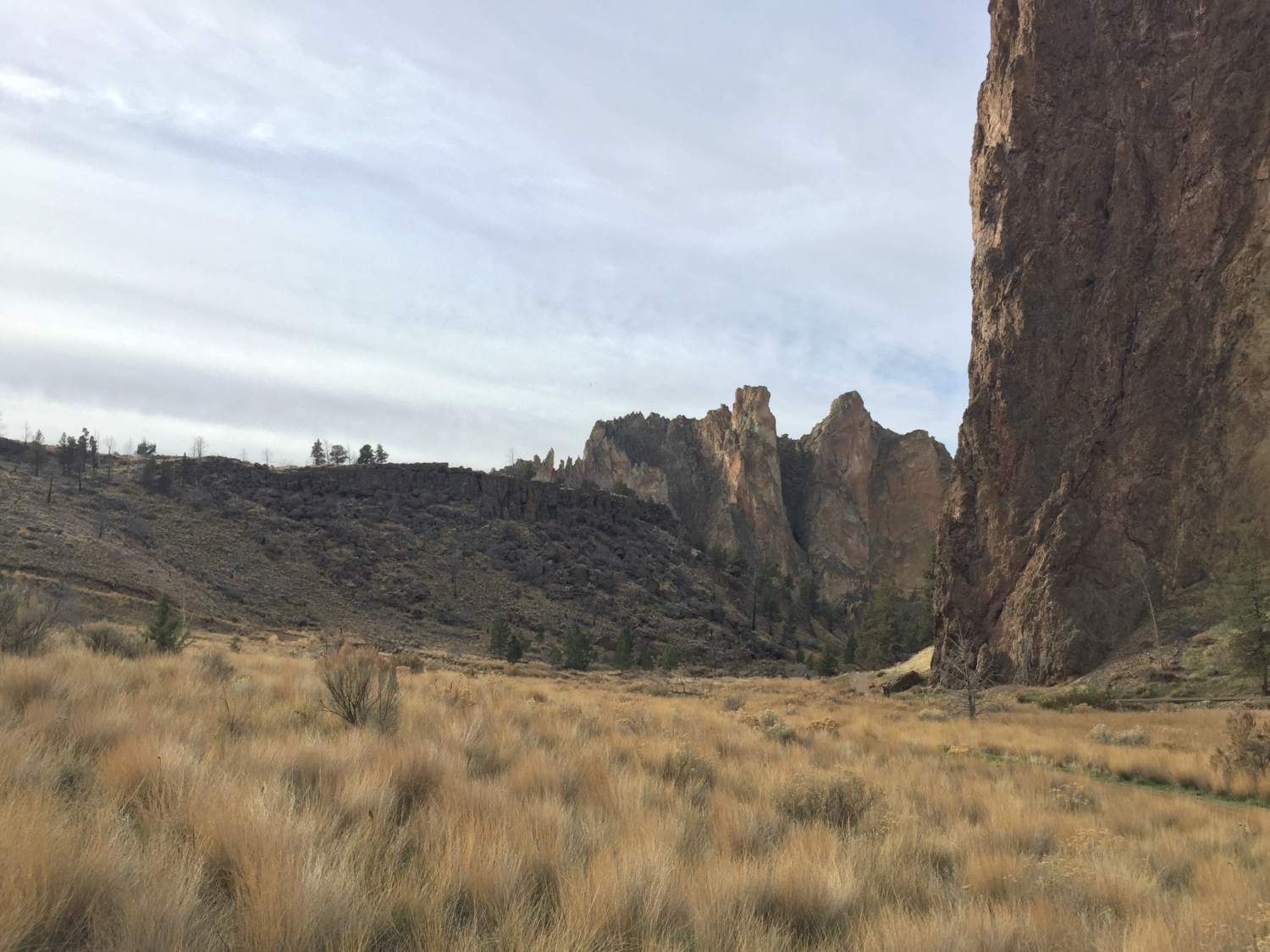 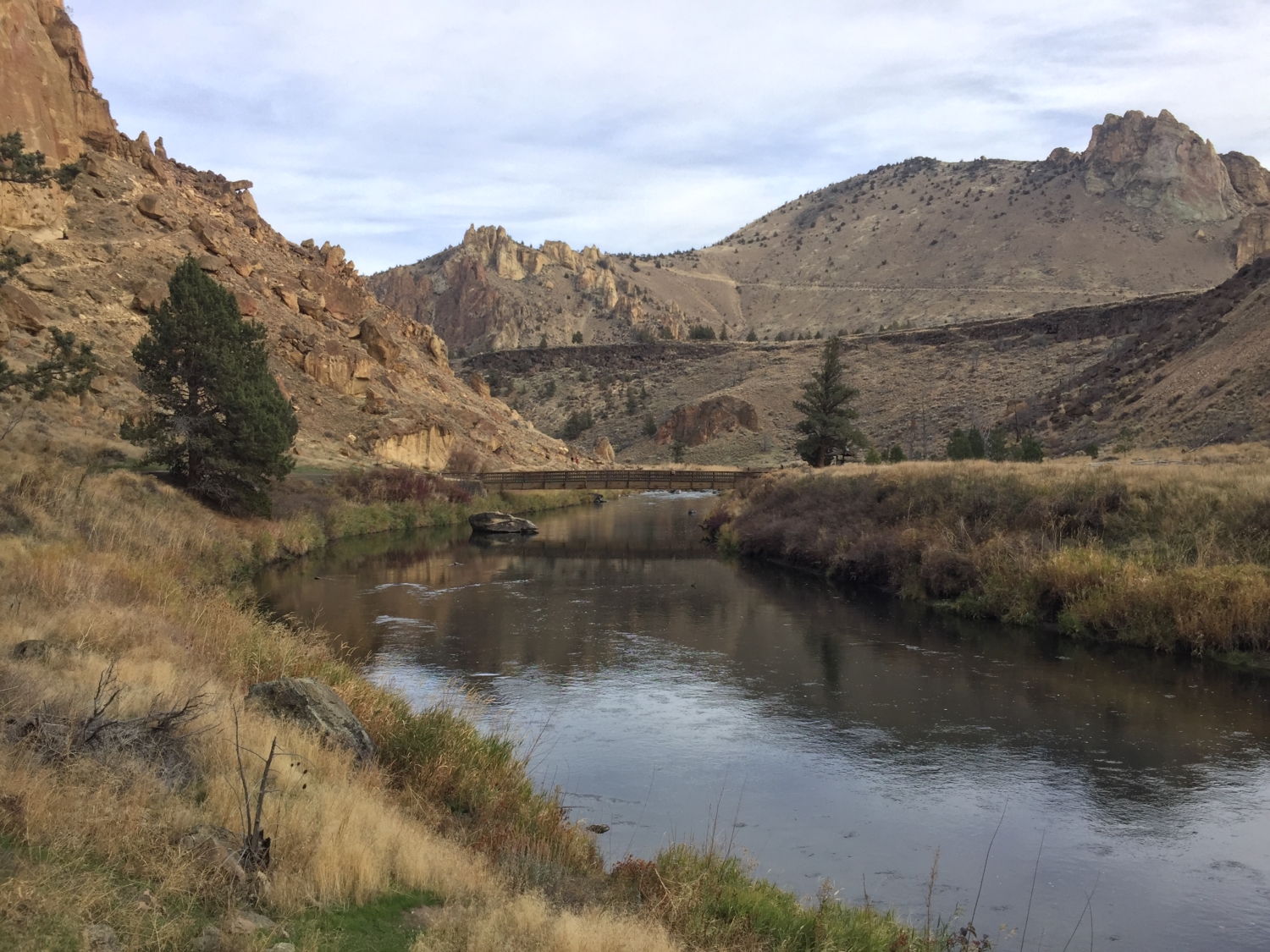 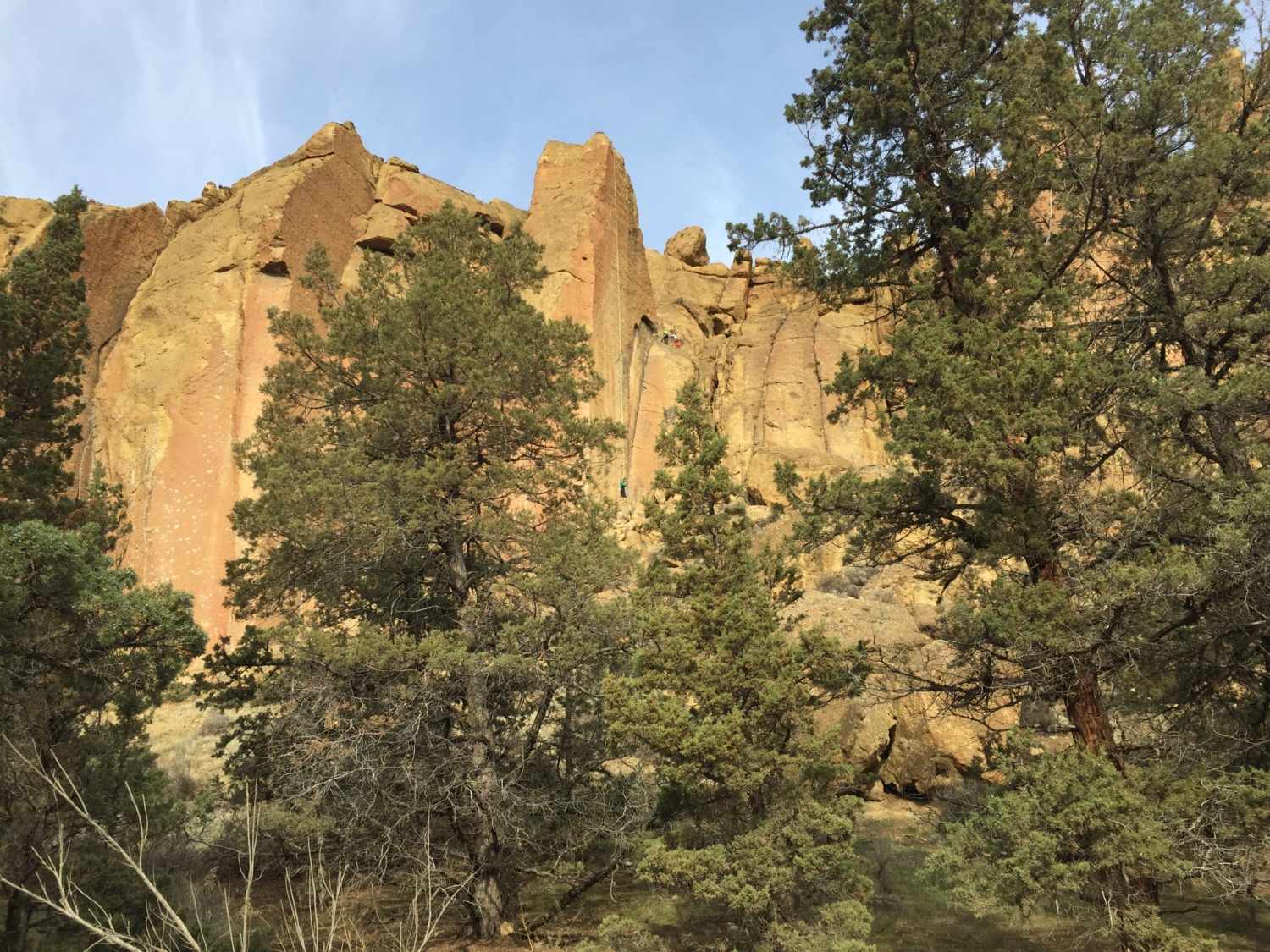 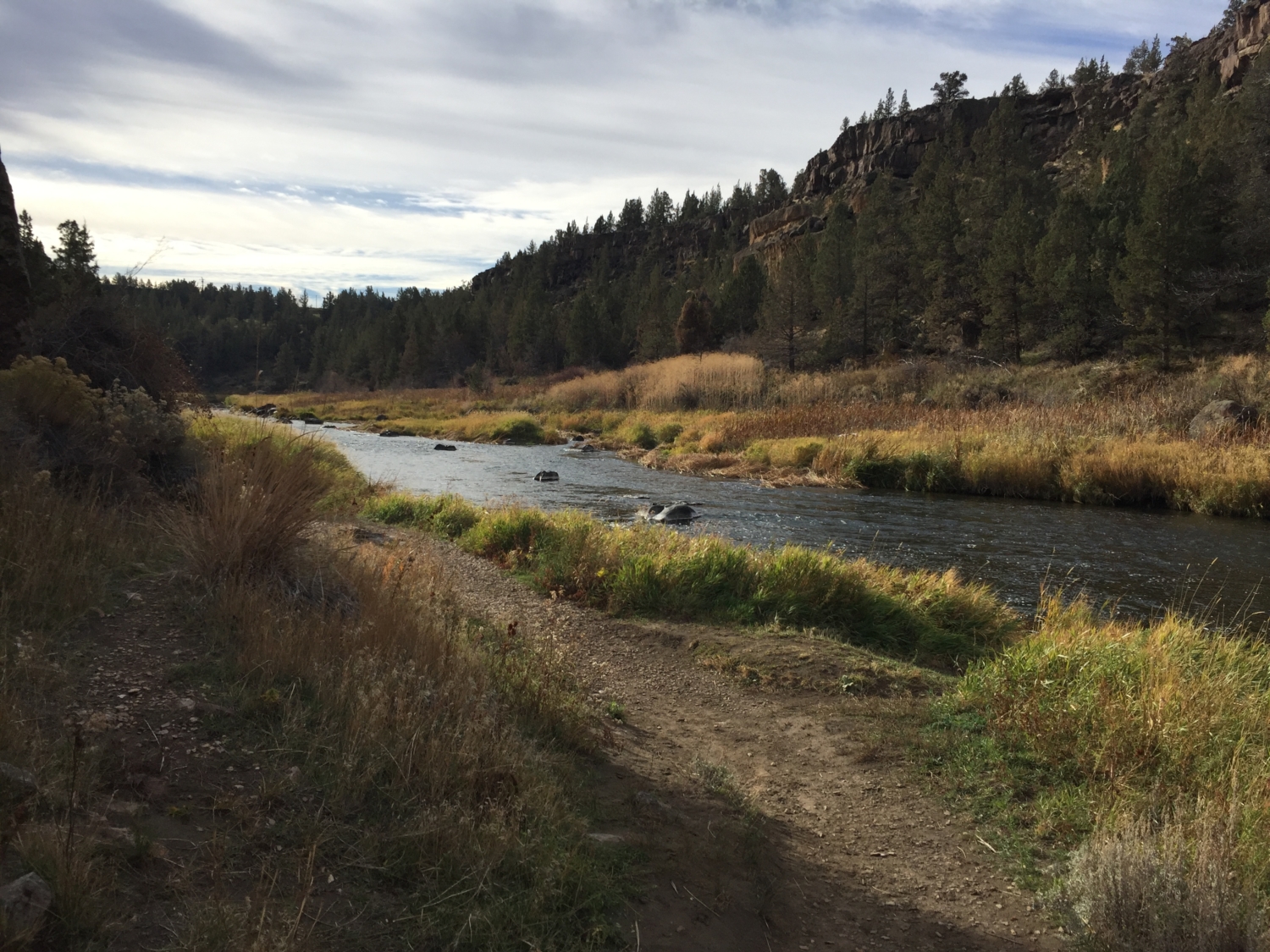 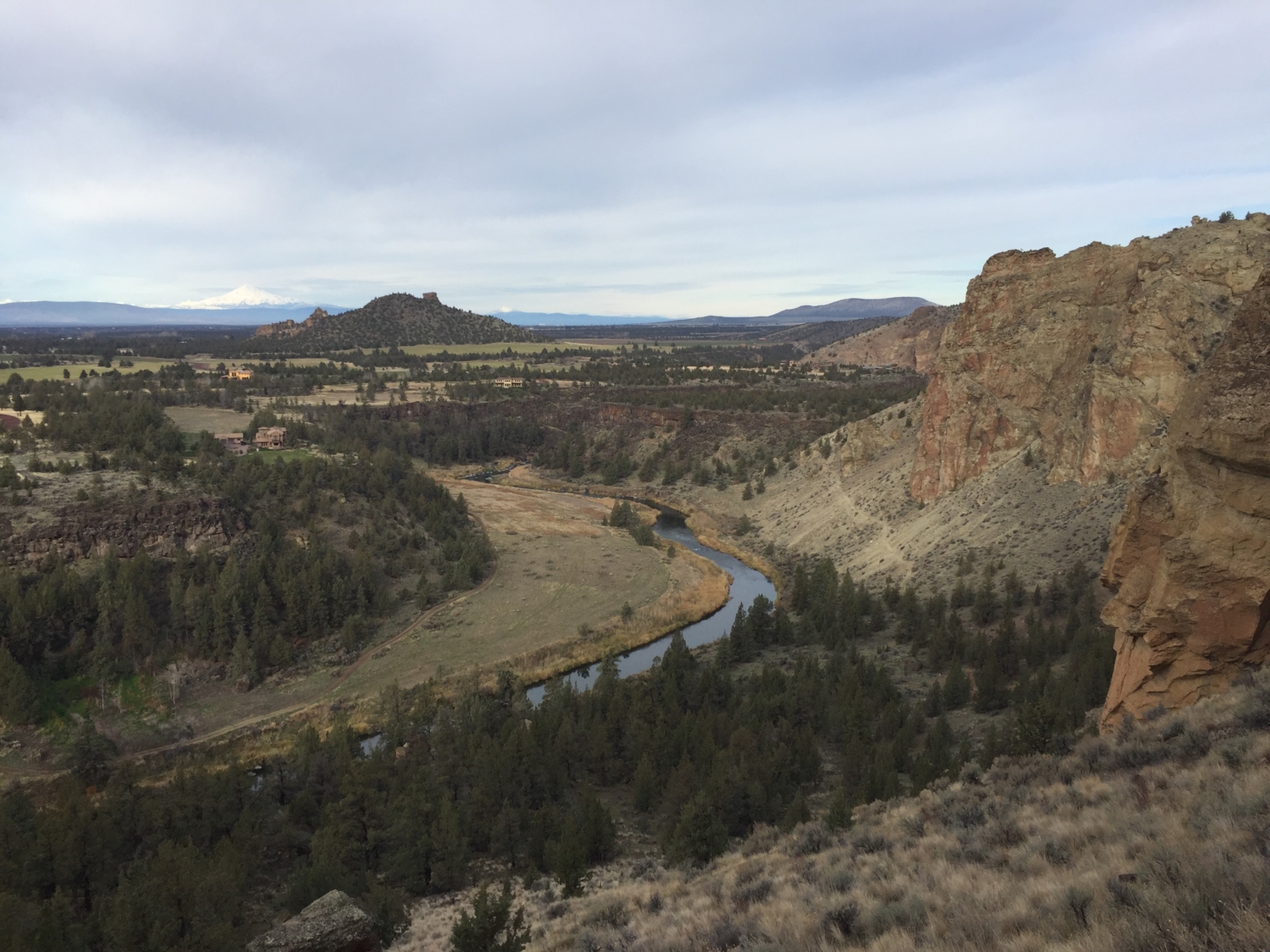 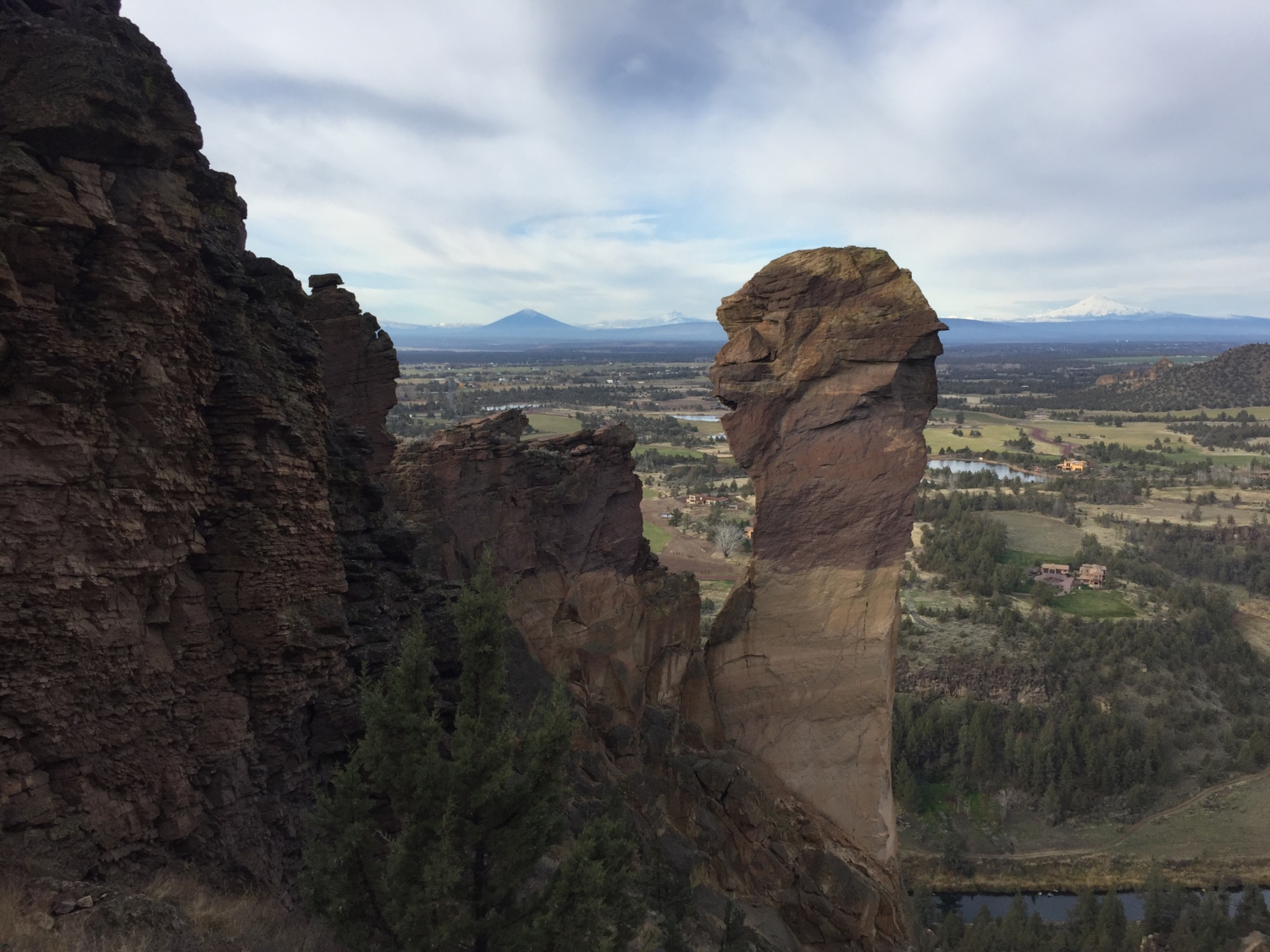 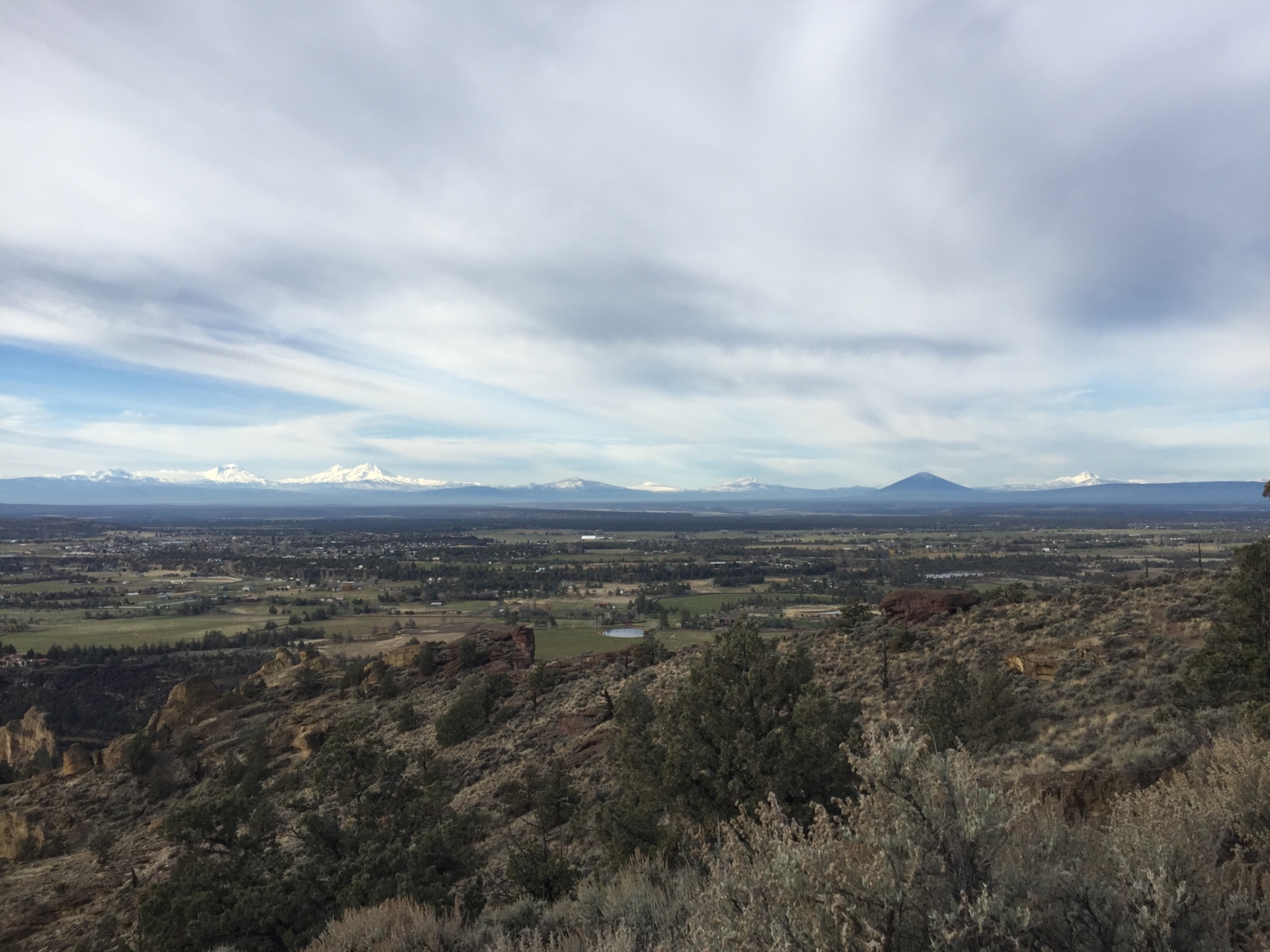 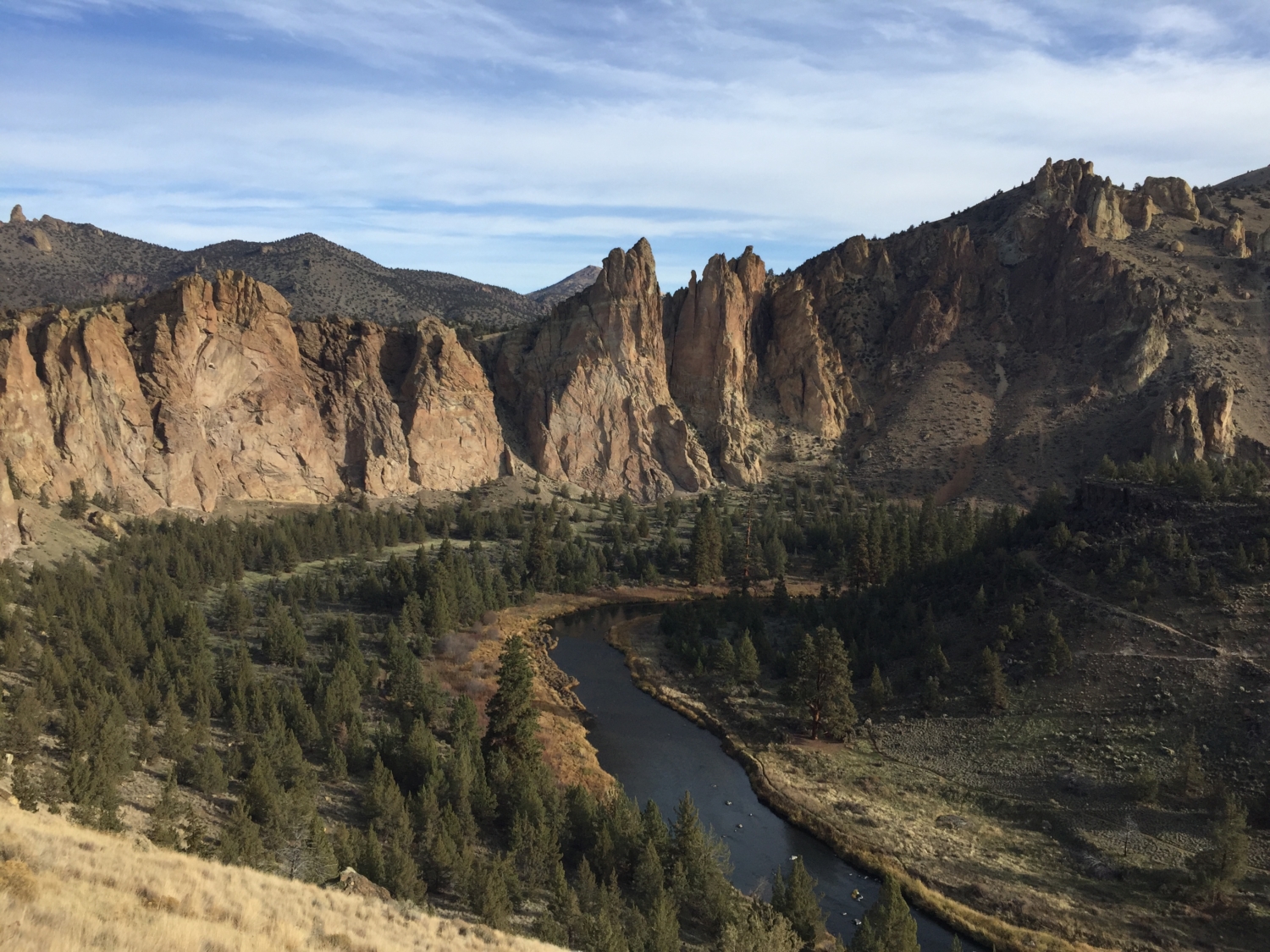 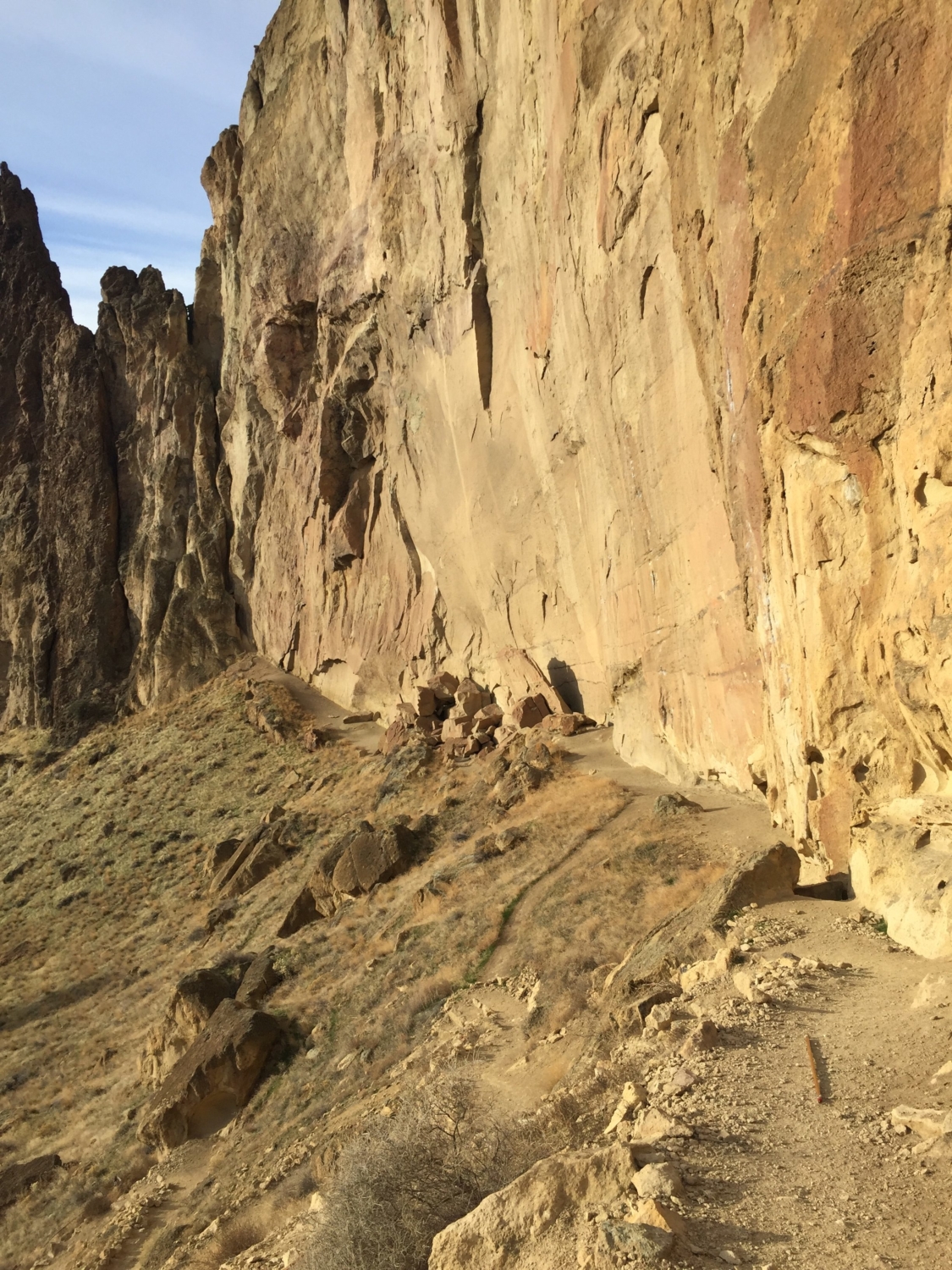 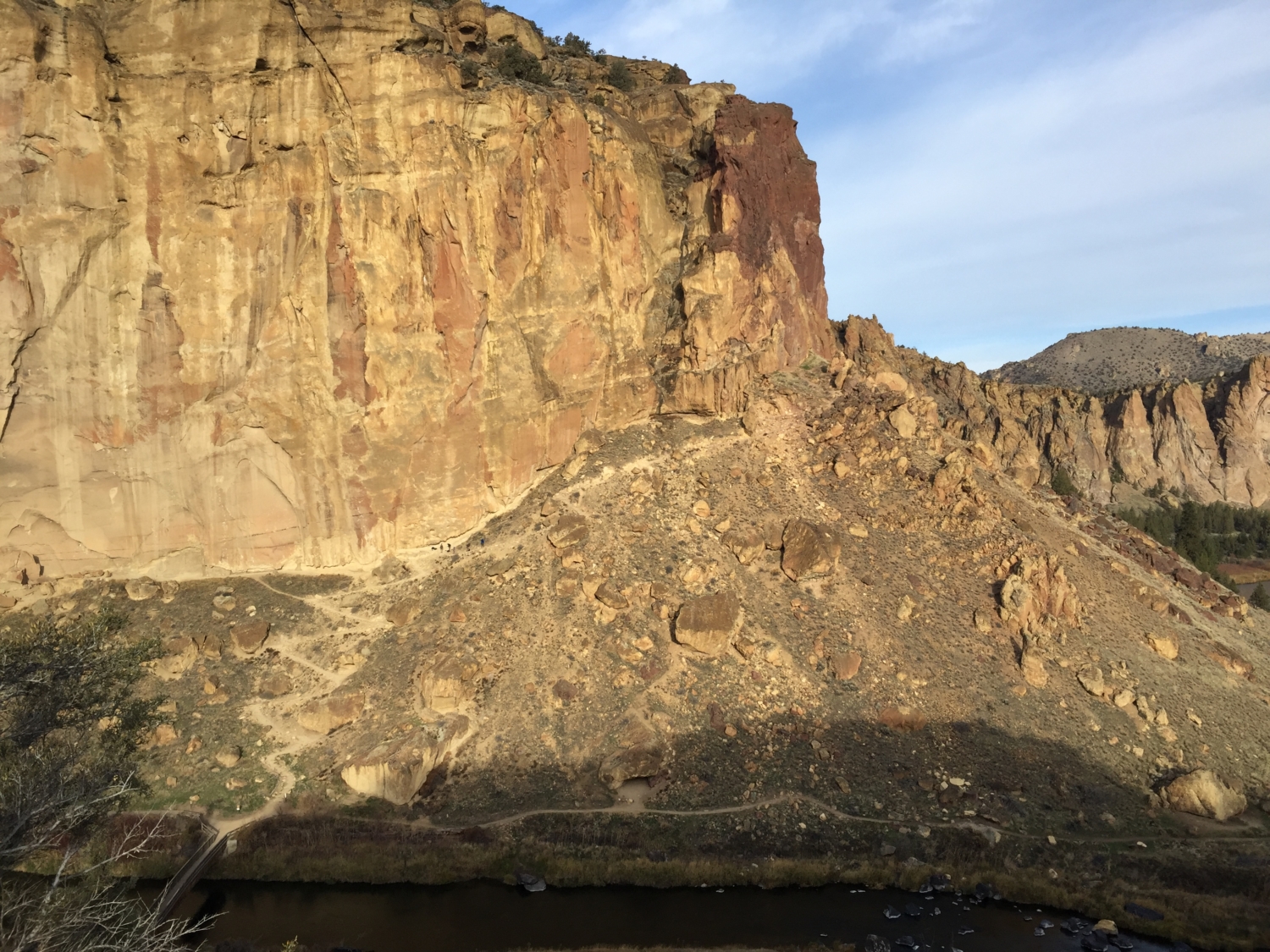 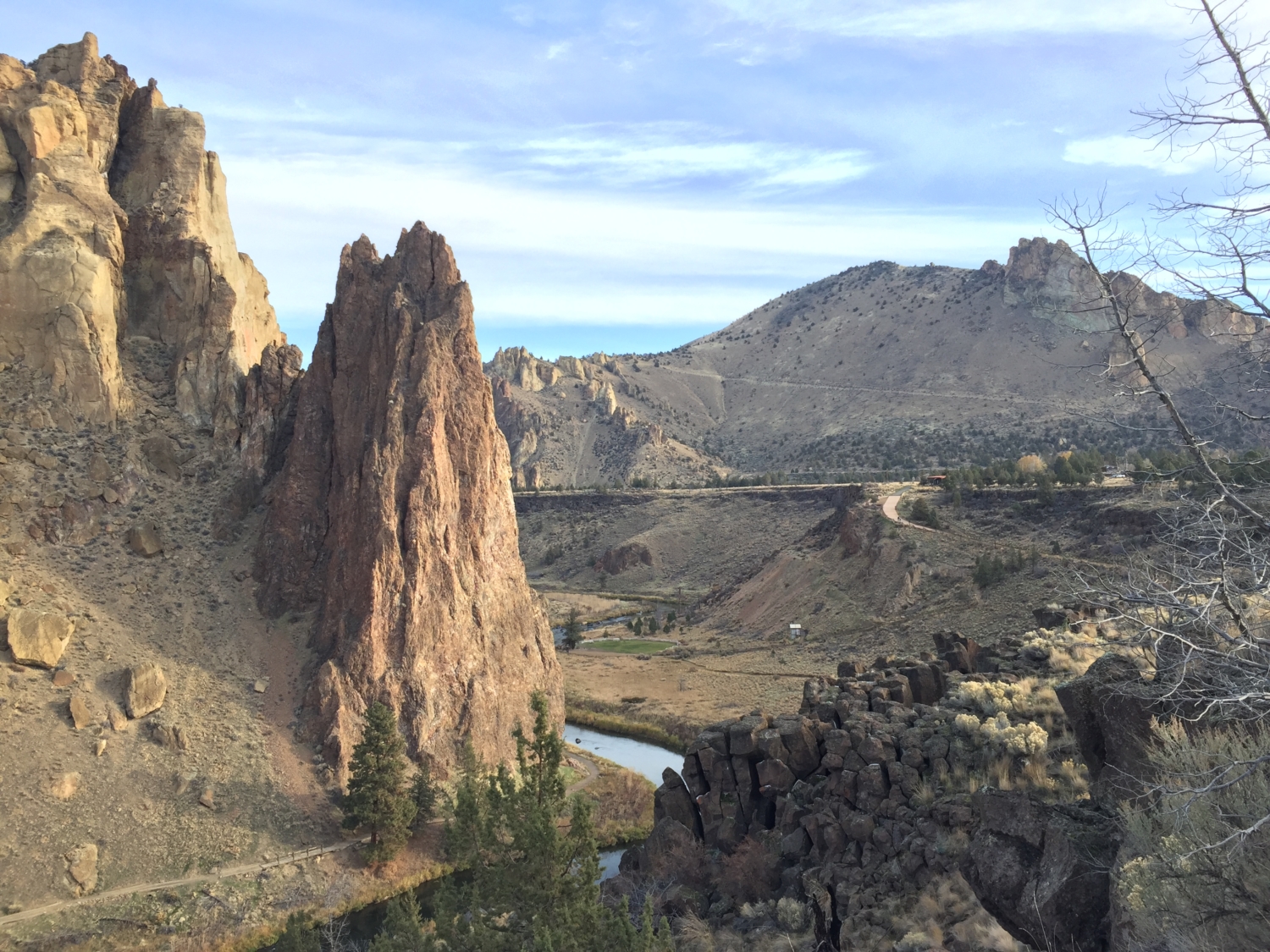 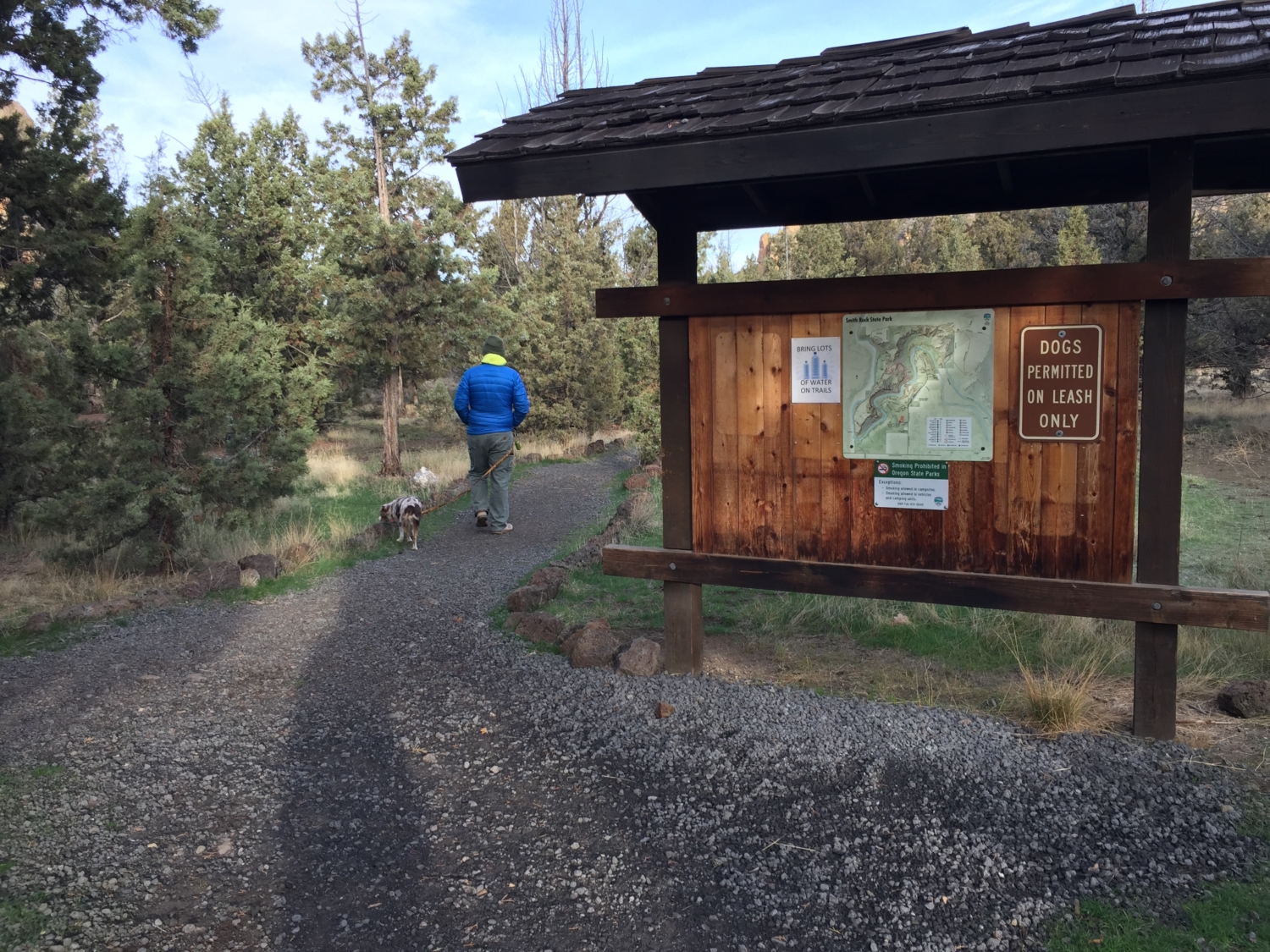 Smith Rock State Park itself has one campground, a walk-in bivouac area for tents. Campers park in a main lot, and then carry their gear a short distance (usually between a 2 and 7 minute walk) to their site. Cooking is not allowed at the sites, but there is a great central area with tables, and an area to wash dishes. Views from cliffside sites!

Smith Rock State Park is located roughly 3 hours from Portland, or 40 minutes north of Bend, a short detour off Highway 97. Once in the small town of Terrebonne, visitors can follow the signs for the park, which eventually take you to the main entrance. If you're camping, you can begin the trail behind the bathroom area, starting on the Rim Rock Trail. If only visiting the park for the day, you can continue past the campground turnoff, to a large parking lot on your left.