The Max Delta Trail is an easy hike that is great for beginners and leads you to a forgotten piece of Phoenix’s mining history. This trail is named after the Max Delta Gold Mining Company that was founded in the early 1900s on South Mountain. In the early stages, a variety of minerals, such as gold, silver, quartz and limonite were extracted. In the later years, tunnels were dug, cabins were built, and heavy equipment was operating upon the mountain. Although the Max Delta Mining Company had to shut down due to poor financial decisions, local investors bought the operation, reclaiming it as the Ace Mining and Development Co.

During the Great Depression the mining and production of gold increased, which made this mine the 2nd largest producer of gold in Maricopa County. Then in 1942, there was an order from the U.S. War Production Board saying that gold mining was unnecessary to the military during World War II, and so the mine was permanently shut down.

But, evidence of the mine still exists upon South Mountain today and the Max Delta Trail will lead you to this forgotten area.

The trail head is located at the main entrance of the park, just after passing the first guard station.  The parking lot is to the right, which will be across the street from the historic Scorpion Gulch and horse stables. As you park your car, the trail is located to the left side of the parking lot. It begins flat but will slightly incline up along the mountain taking you up towards the 2nd guard stations, where you will be hiking above it along the mountain. In this area, there is also a nature trail which meets up with the Max Delta on occasion. The park does a great job of placing trail markers along Max Delta so that you will not accidentally end up on this Nature Trail. 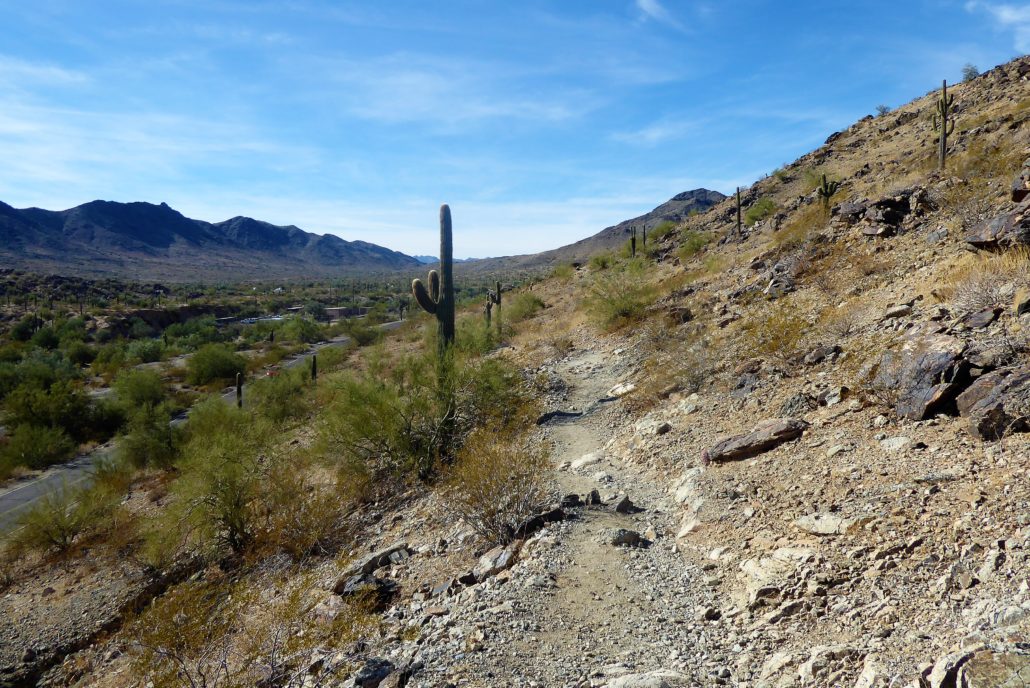 At around 0.9 mile the route may become a little confusing. It looks as if this trail continues going straight, but there is a trail marker indicating to turn left. So remember to pay attention here so you don’t miss the turn. Even upon first glance to the left, it may look like there’s not even a trail there. But, if you take a harder look, you will see that the trail does dip down and there is another marker indicating the continuation of the Max Delta Trail. Shortly thereafter you will cross over one of the park’s paved streets and continue the trail on the other side. 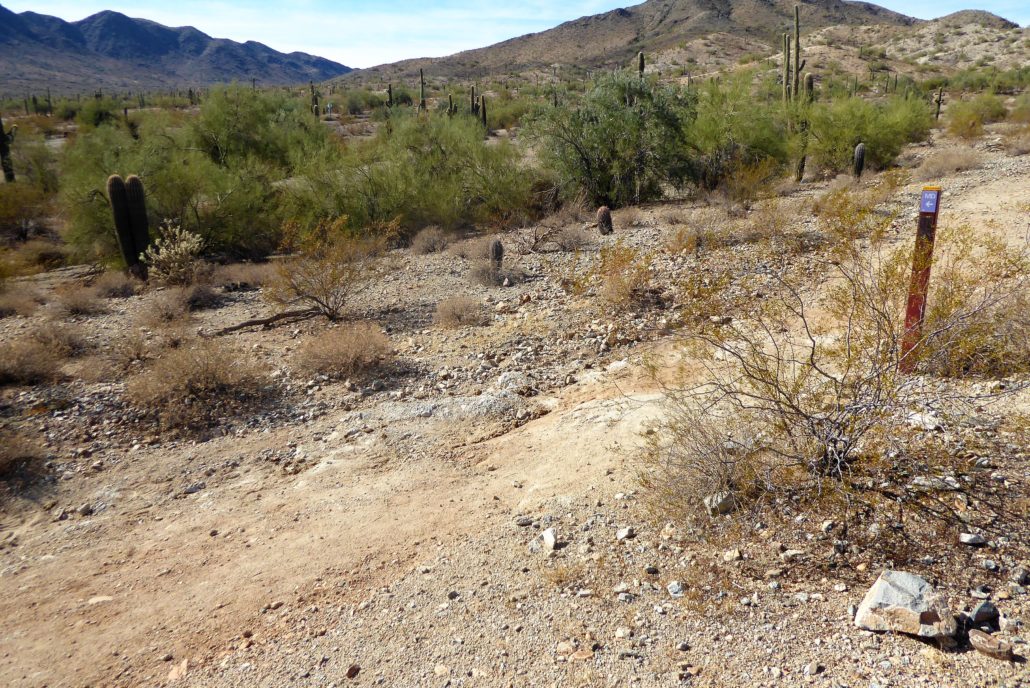 At around 0.9 mile a trail marker will indicate to turn left 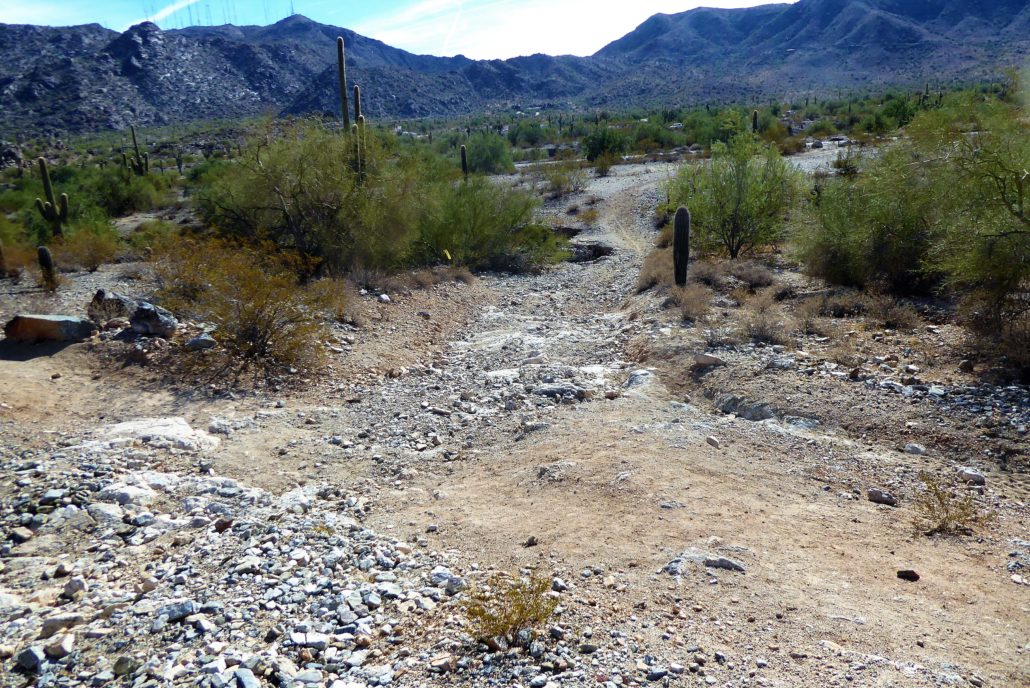 View of Max Delta when turning left at the 0.9 trail marker 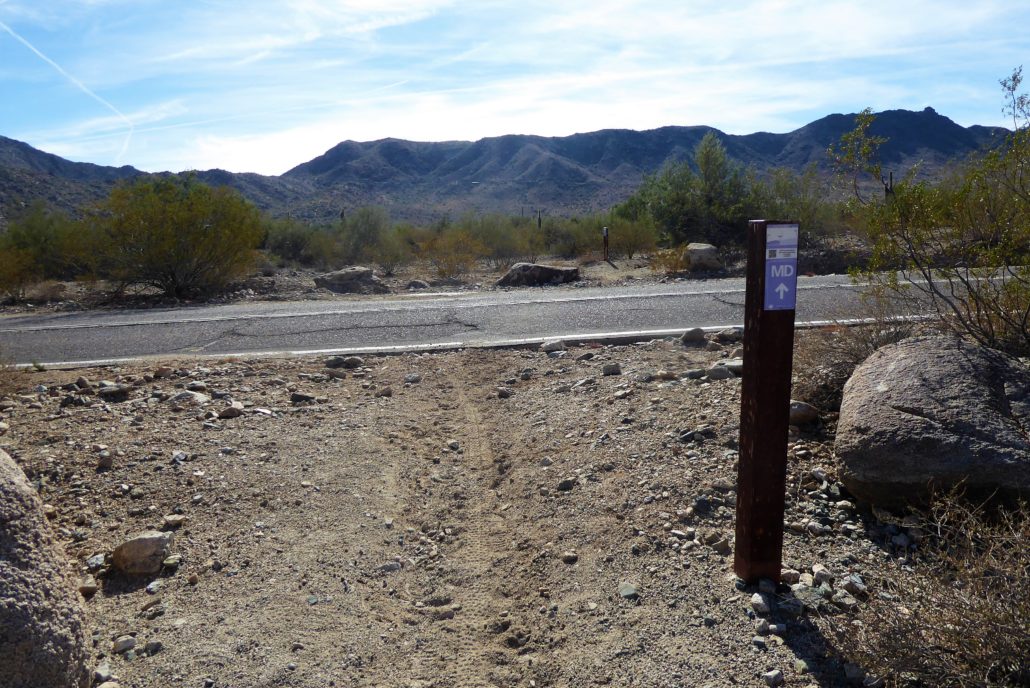 This trail remains relatively flat and straight forward with some ups and downs in the wash areas. During the majority of this trail you will be hiking in the low lands of the mountain range and near the main park road. You’ll be near a lot of the park’s auto traffic, so you might want to bring along some earbuds and good music to drown out the car sounds in these sections. 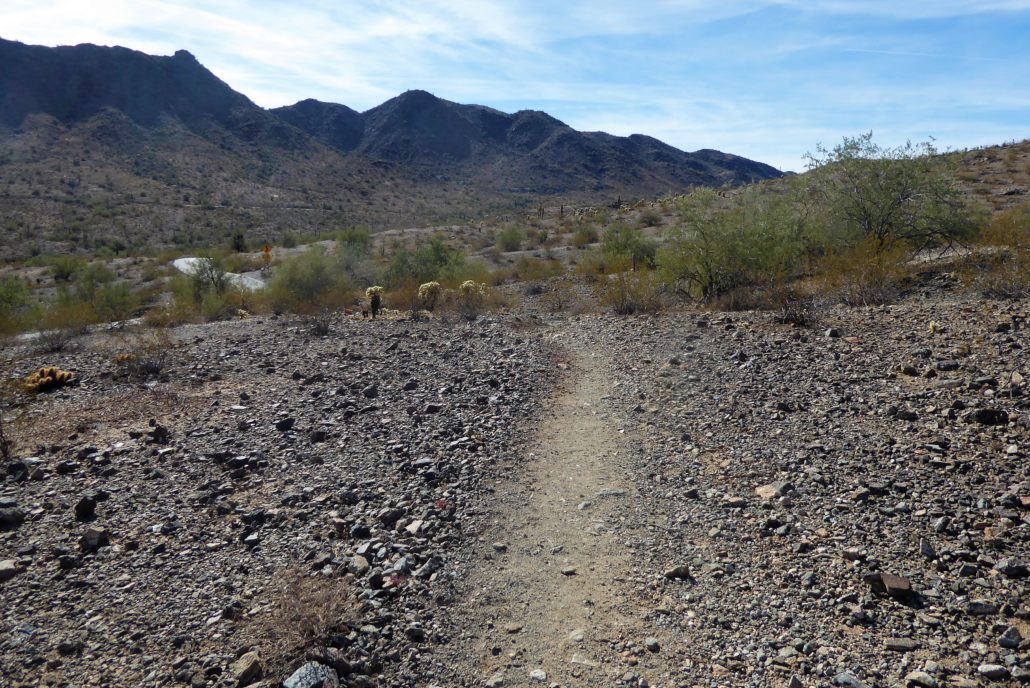 Also, there are no shady areas throughout this trail so be sure to wear sun screen or protective clothing. While this hike is short, it can be brutal having that hot desert sun shining on you. Once at the last trail marker for this hike, you will be standing on San Juan Road, just a few feet away from the San Juan Gate. San Juan Road is usually gated off to motorized vehicles but hikers and bikers can still be on the road to access the trails. 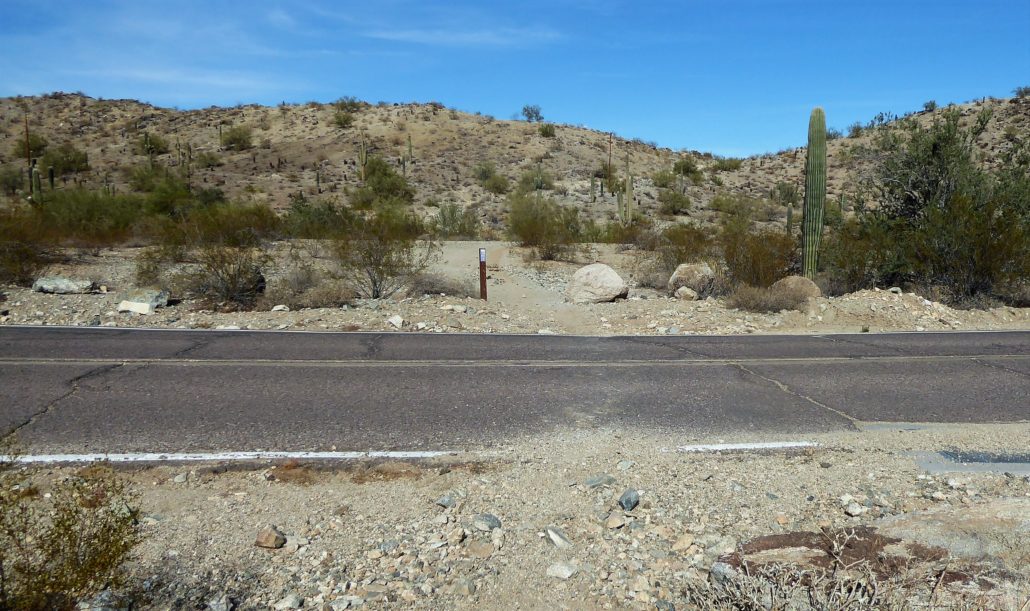 Looking at the end of Max Delta trail from the Bajada Trail across the road.

At first this ending seems a little disappointing and abrupt. But there’s more that meets the eye here! There are a few other trails in this area that you can easily get onto if you want to gain more miles or if you’re up for some off trail adventures you are just a short distance away from the location of the old Max Delta Mine. In fact, if you look closer out at the mountain range straight ahead, you will actually notice big piles of stones that have been left there by the mining company.

Although hiking towards the mine is technically off the trail and not advertised by the park, it’s an extremely easy path to follow. I feel that the route to reach the mine site must have been an old unpaved road that the miners used. You will clearly see a wide path created by rocks heading towards the site. So while I personally never recommend purposely getting off trail, I feel that if you follow this wide road, you will be safe. Just remember that this area is not heavily trafficked so be aware of your footing and pay even more attention for rattlesnakes and wildlife who are not used to a lot of visitors.

Okay, with that said, let’s get to the old mine!

From the end of Max Delta Trail you will cross the paved San Juan Road and get onto the Bajada Trail that is directly across the road. You will want to take Bajada trail to the right for only about 10 feet or so. There is another trail marker indicating to stay straight for the Bajada trail, but if you look to the left, you will be able to clearly make out another path, heading towards the base of the mountain. 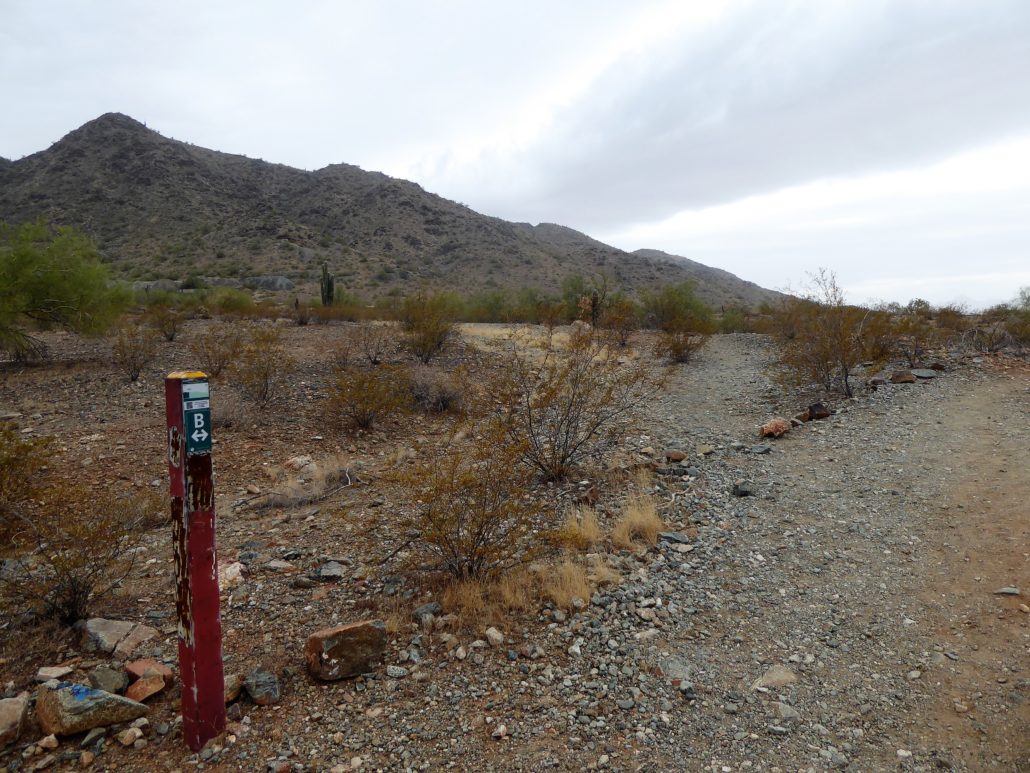 The path to the mine is located on the left, just a few feet ahead of the Bajada trail marker

Again, the park does not broadcast this, but it’s clearly there! You will also see an old washed out sign leaning up against a cactus that is also a landmark of where to turn left. This path is very easy to follow and is not far away. In fact, you will still be able to see and hear other hikers along the Bajada Trail from the mine site. 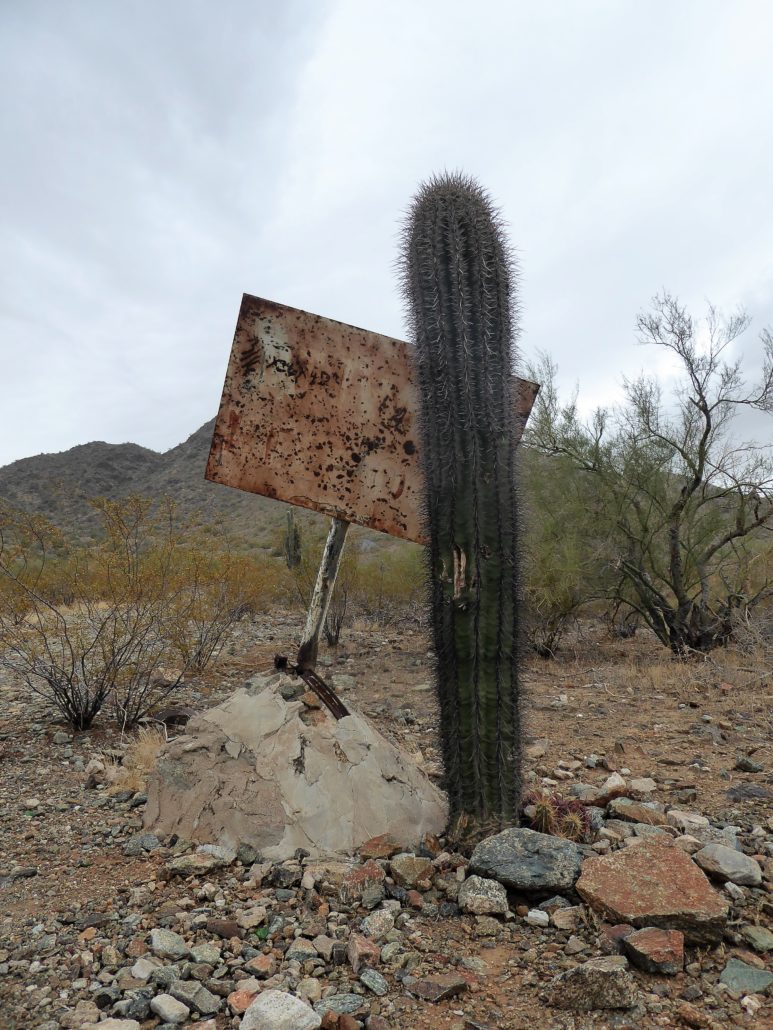 As you make your way ahead the ground changes from the dusty desert dirt to a smooth and white sandy area with deep cracks. It feels more like you would be standing on what once was a sand bar, instead of the desert ground. Further toward the right you will see an abandoned fireplace in the distance. There’s an eerie feeling as you approach this silent fireplace proudly standing in the middle of the desert with no one to give warmth to. 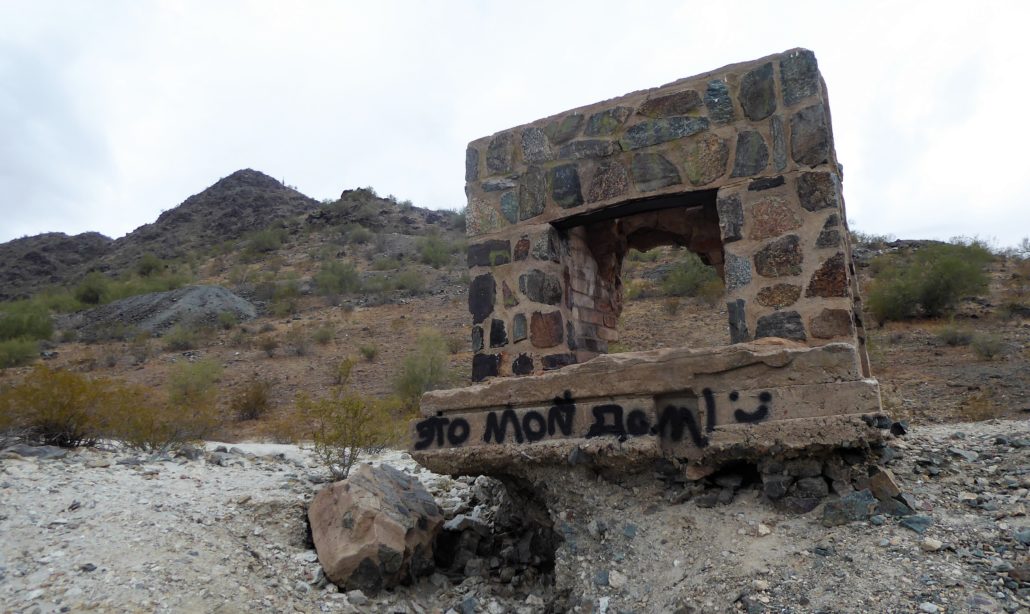 As you continue hiking up and making your way closer you will see the concrete foundation layout of the mine. You are able to walk across this foundation and explore the whole area. While unfortunately, some things have been painted and defaced, there is still a lot to see. From gnarly nails sticking out of the old foundation and slowly decaying cans and equipment laying around, you can still feel the energy left behind from the miners. It should go without saying, but we’ll say it anyway — do not disturb or remove any objects from this or any other park. Leave things as you found them so that others can enjoy the same experience you had. 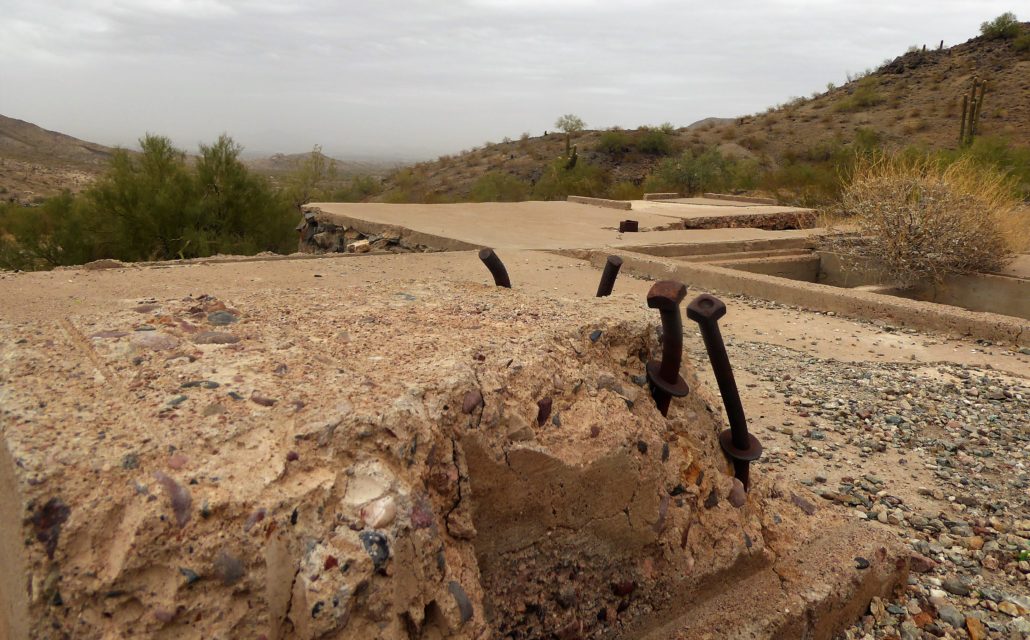 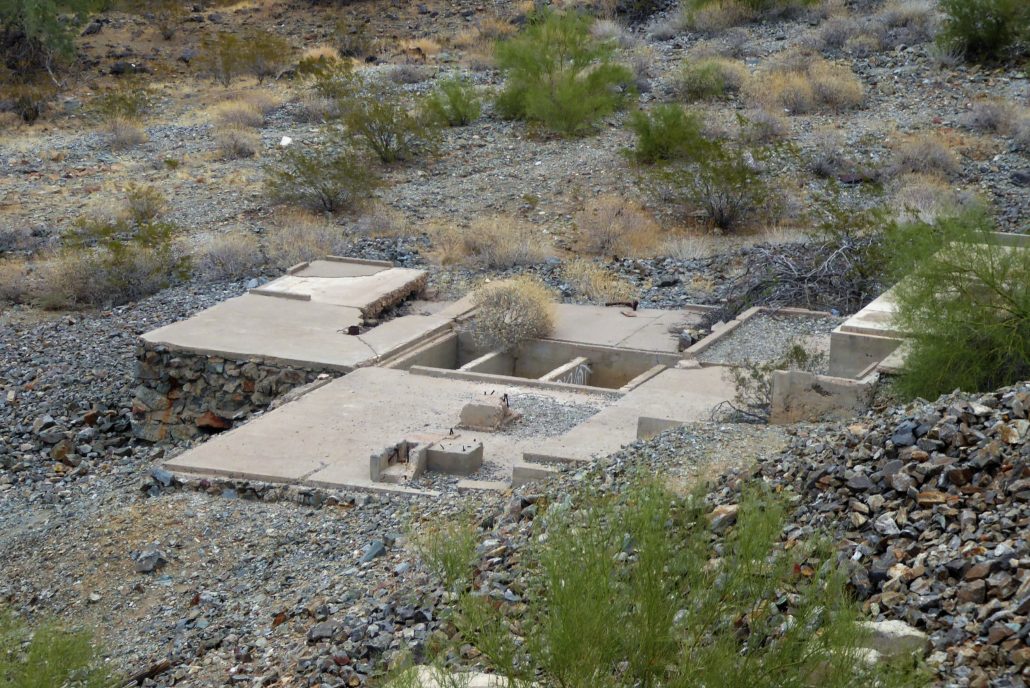 The foundation of the old mining company

So don’t let Max Delta Trail trick you into thinking it’s just another hiking trail on South Mountain. This one leads you right up to a point in history that has remained a piece of the mountain for close to a hundred years. 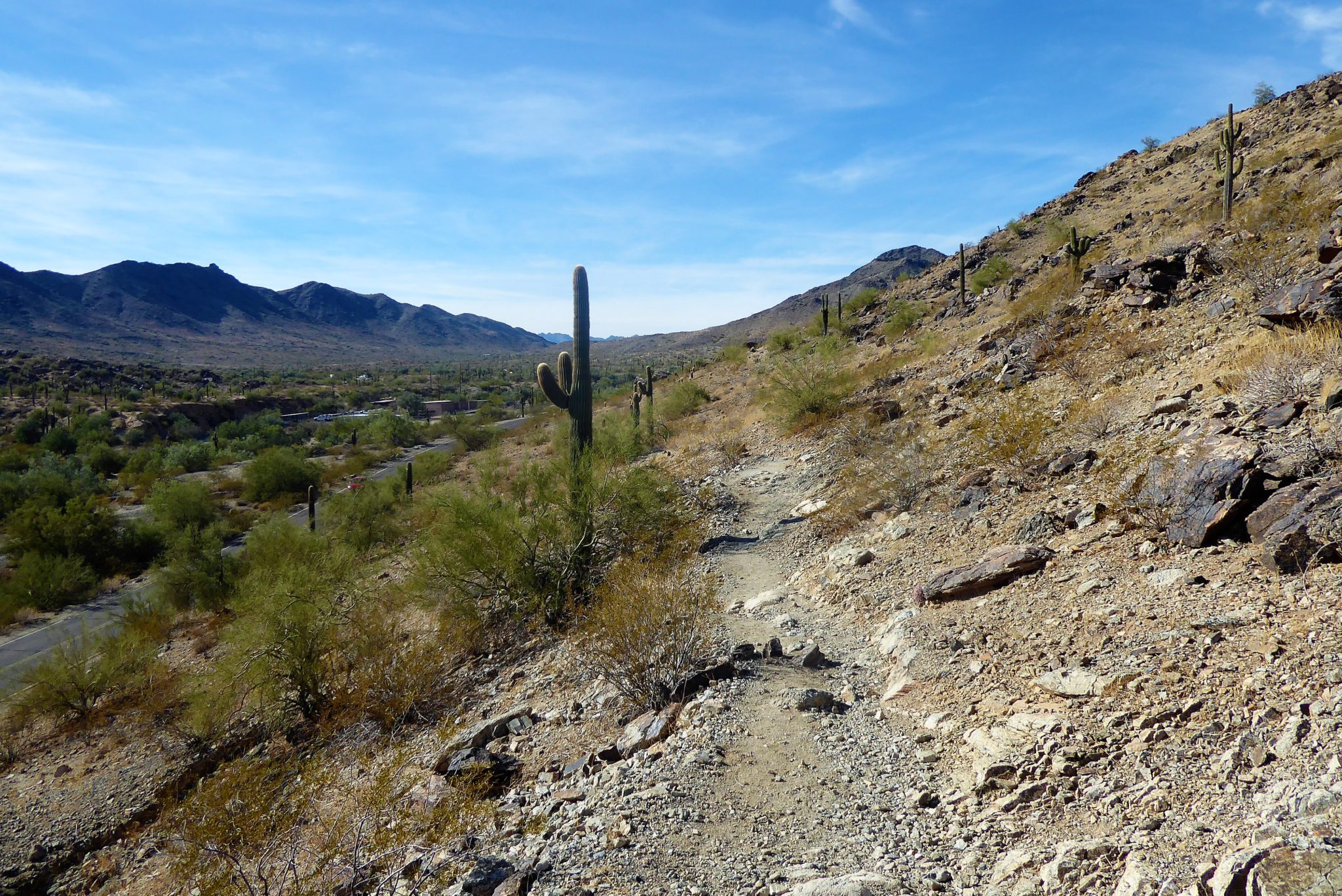 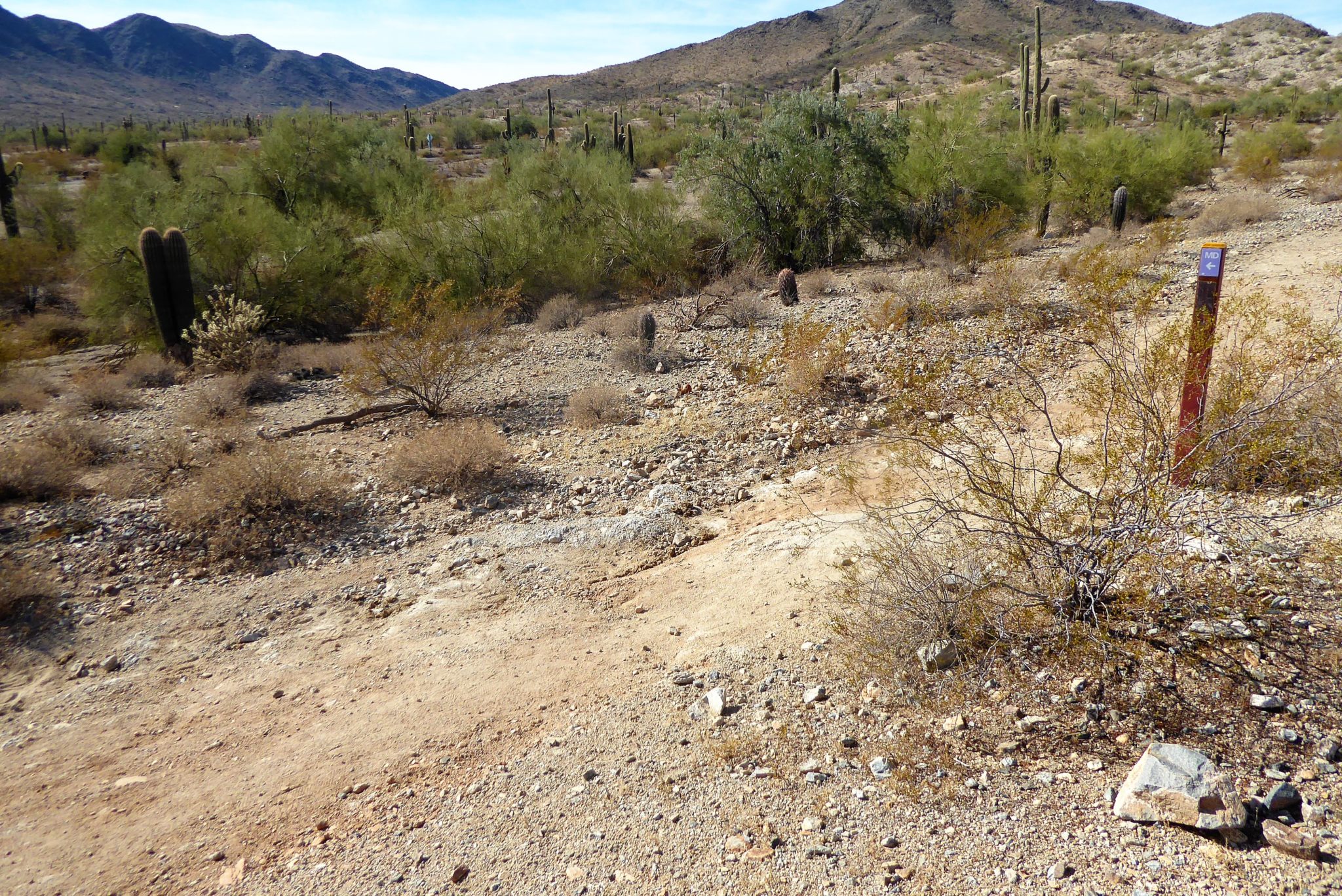 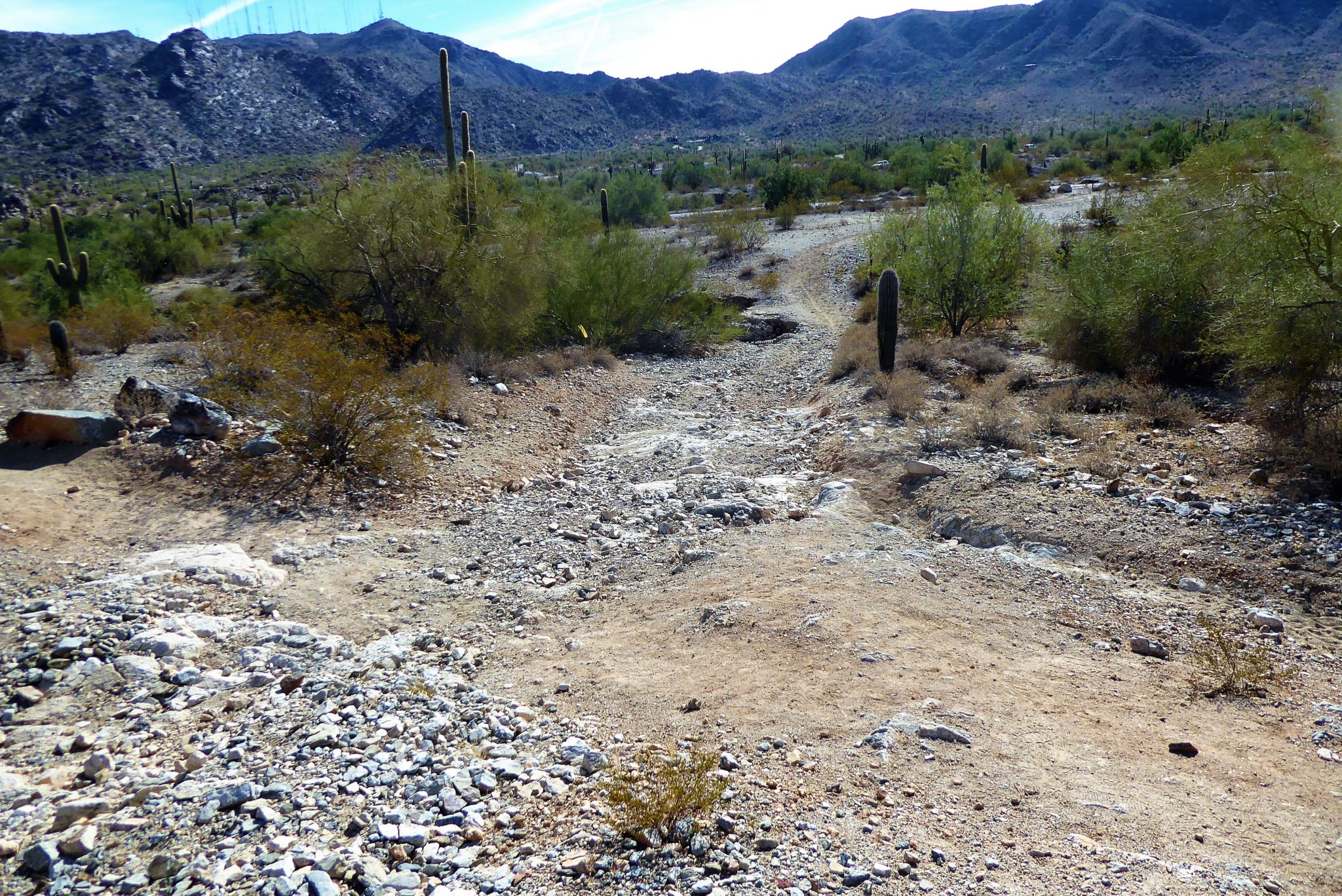 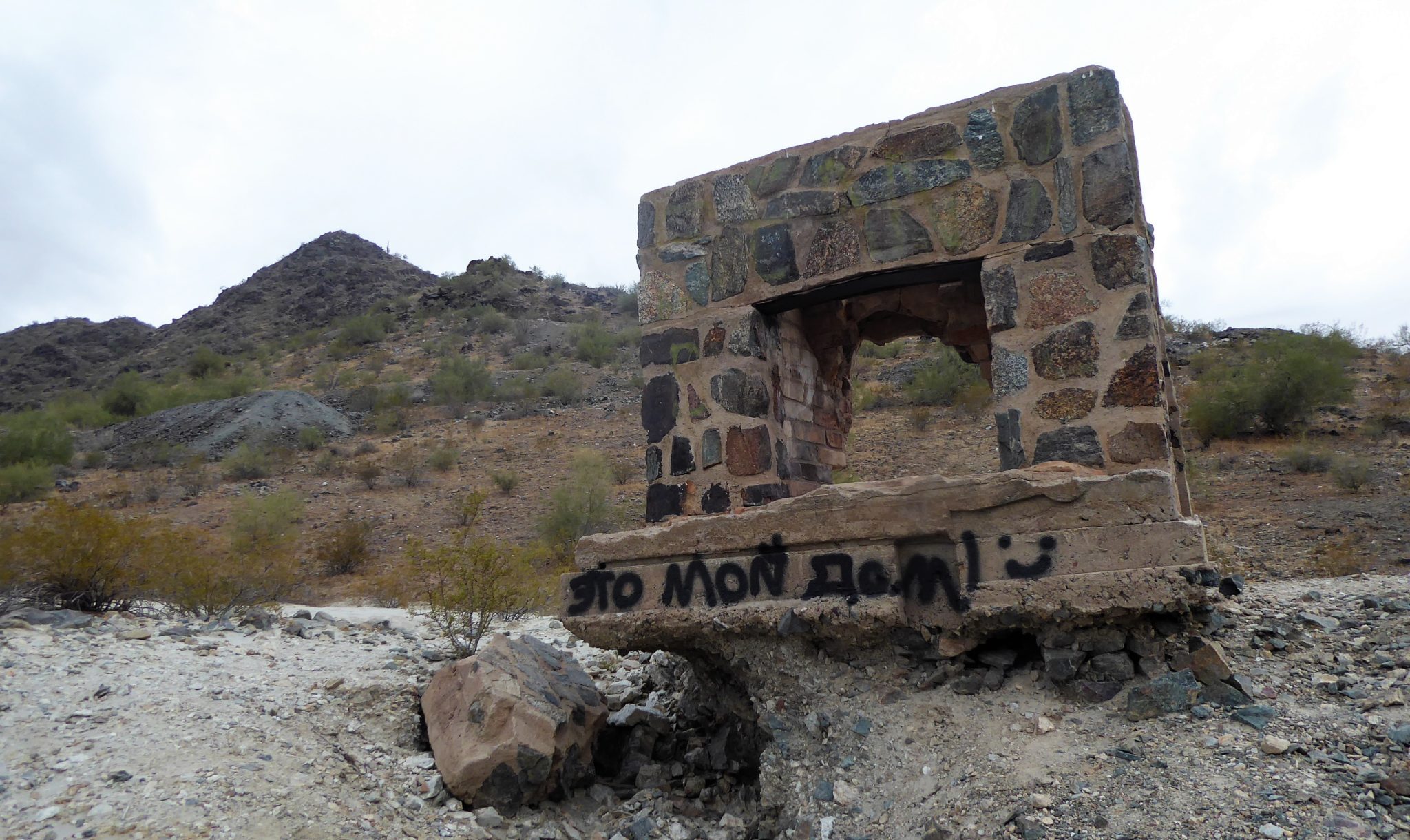 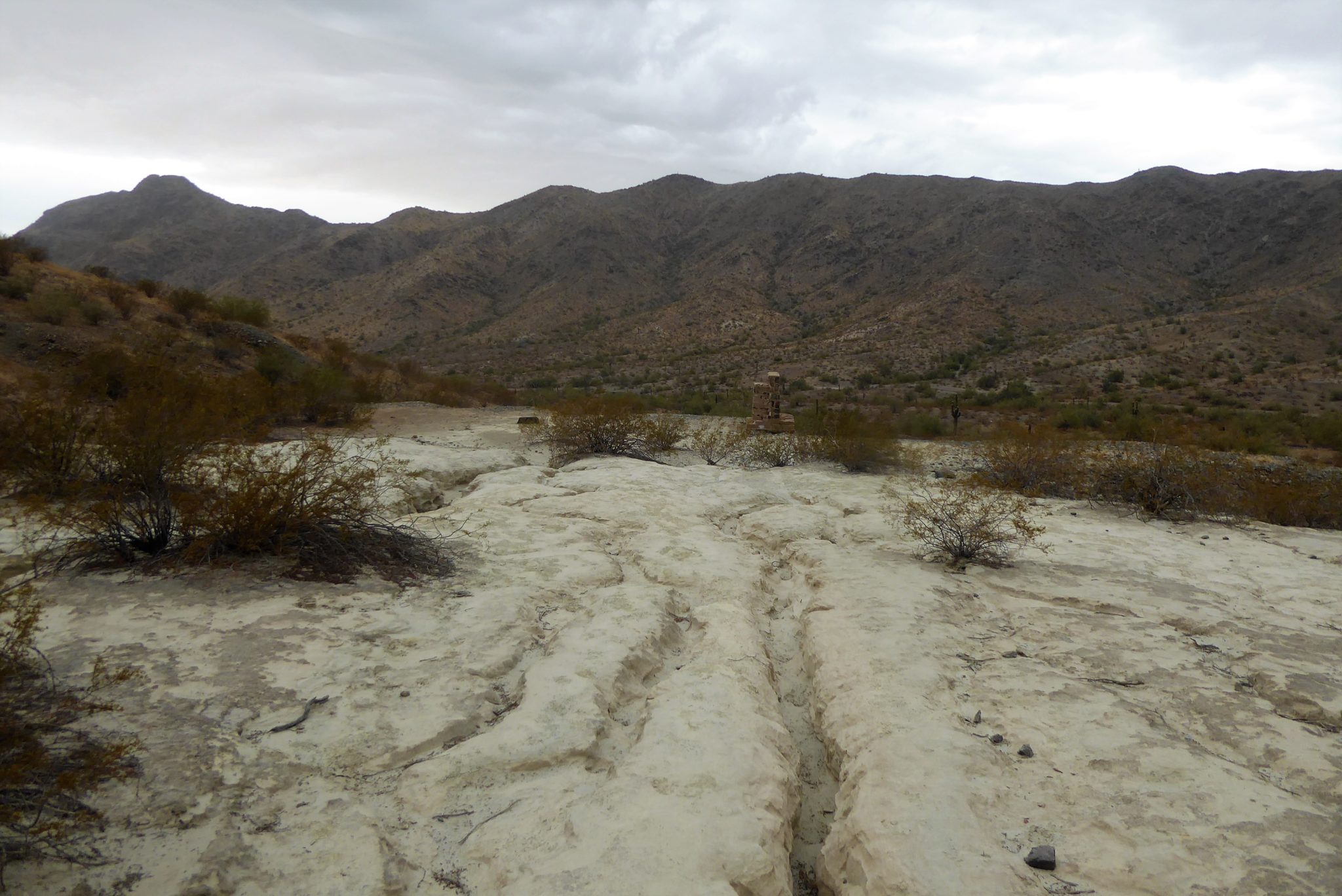 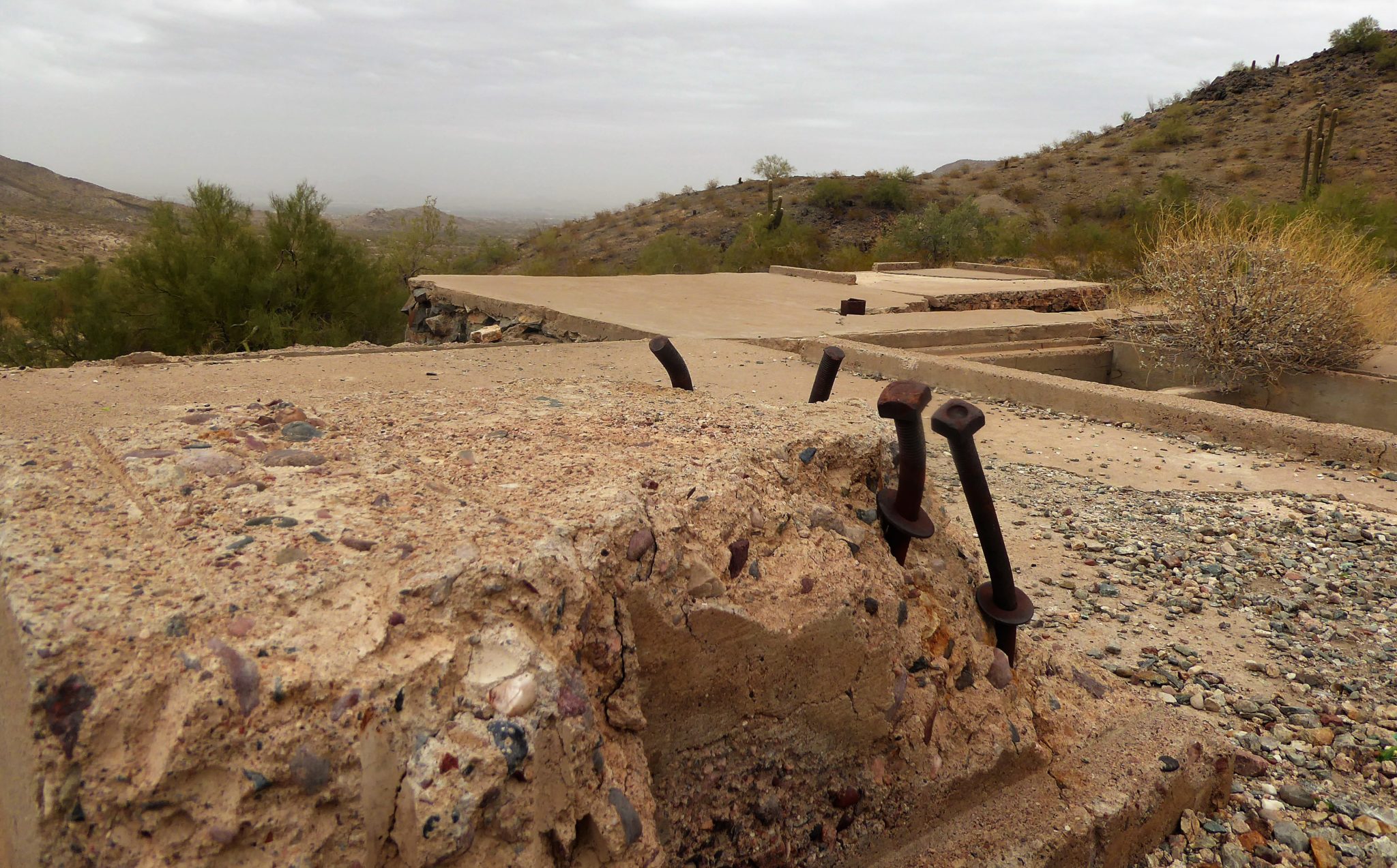 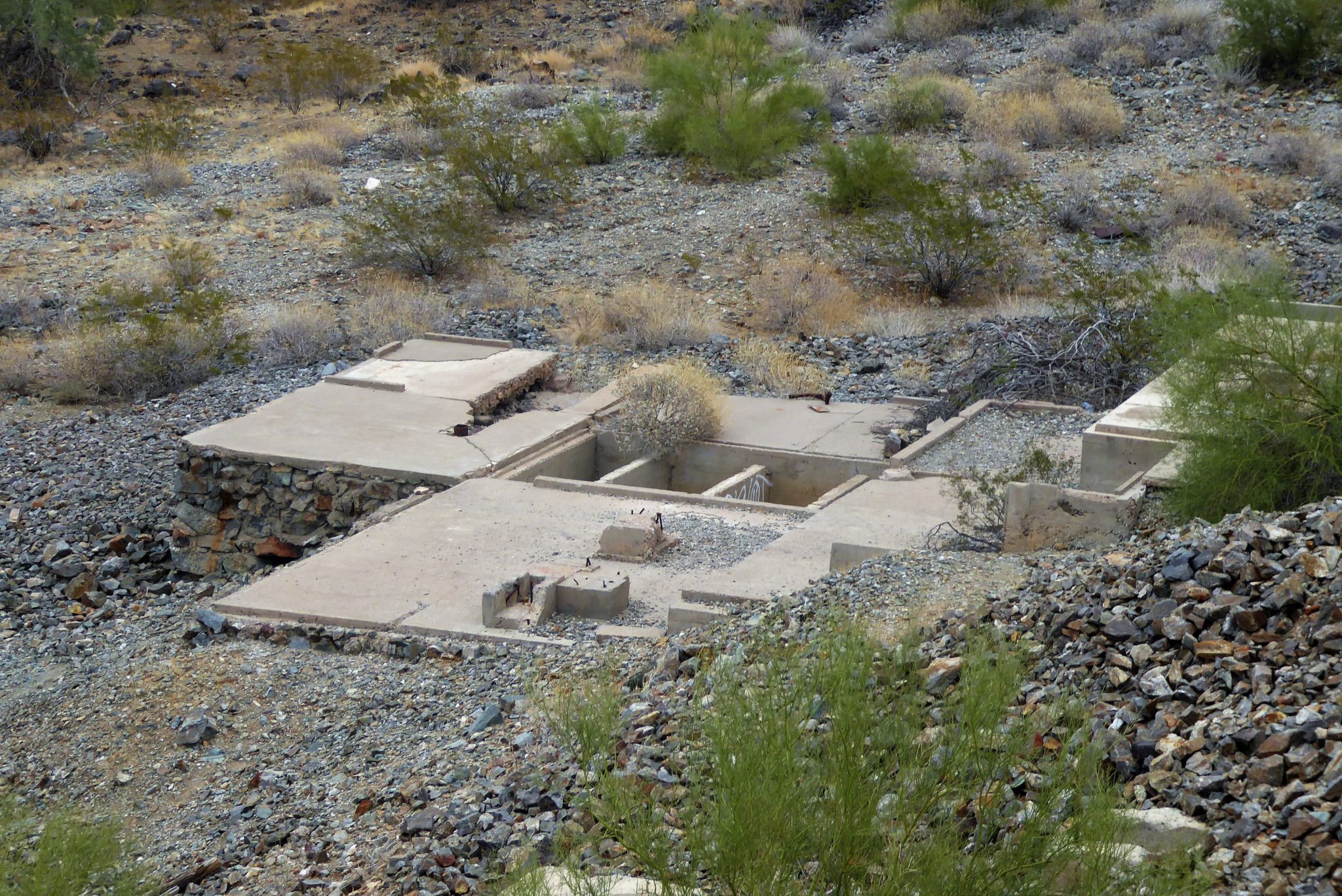 The foundation of the old mining company 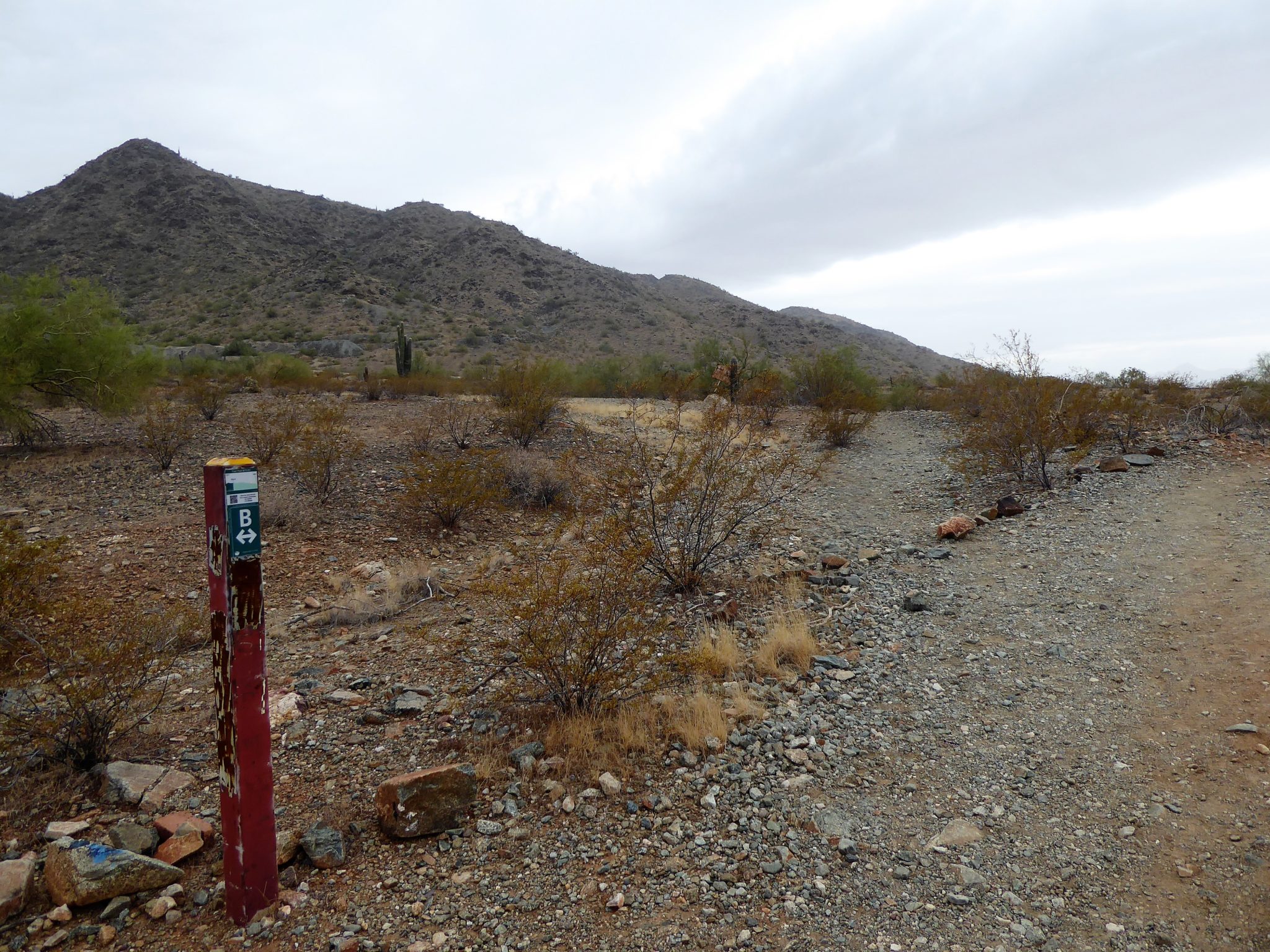 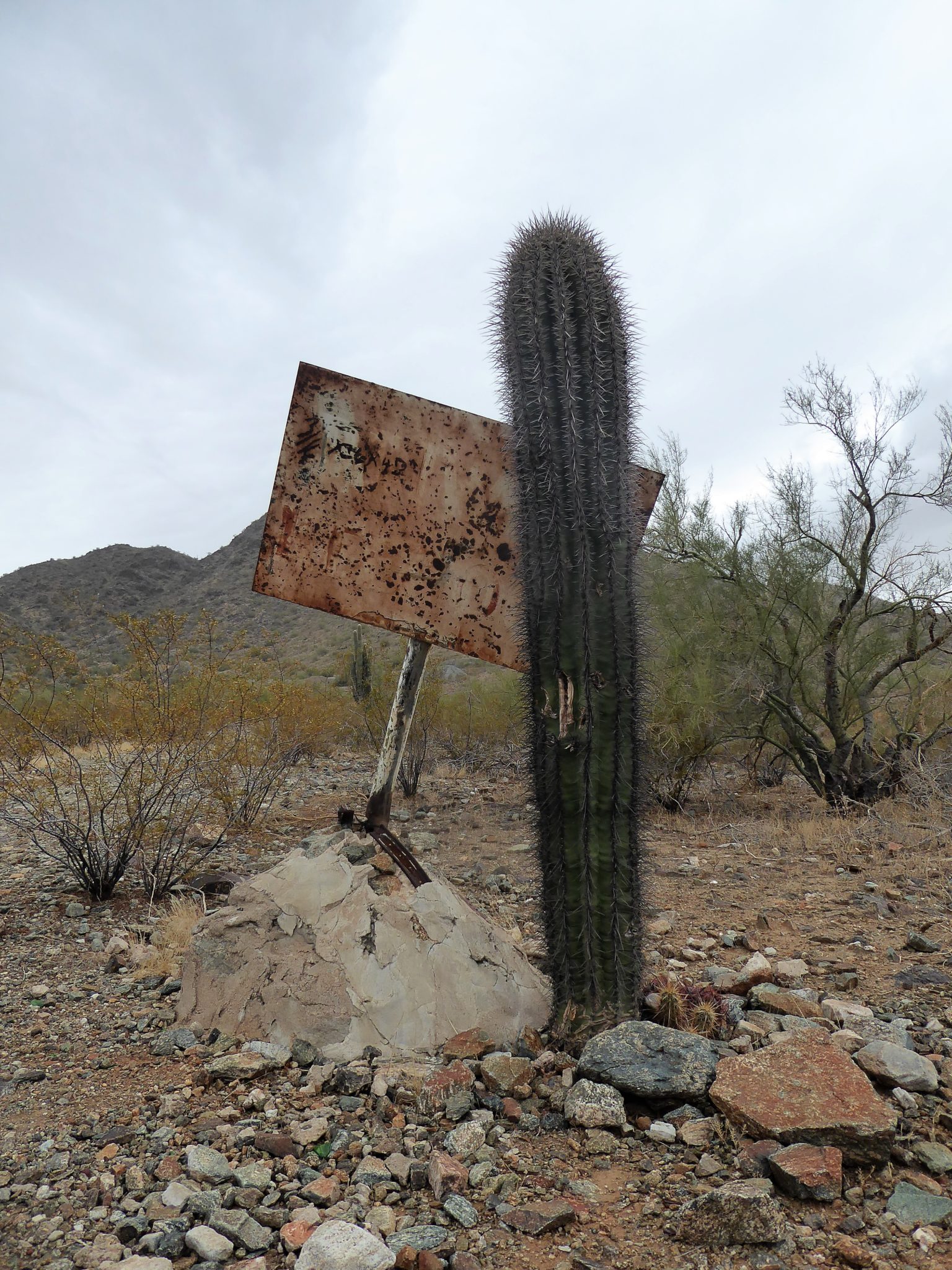 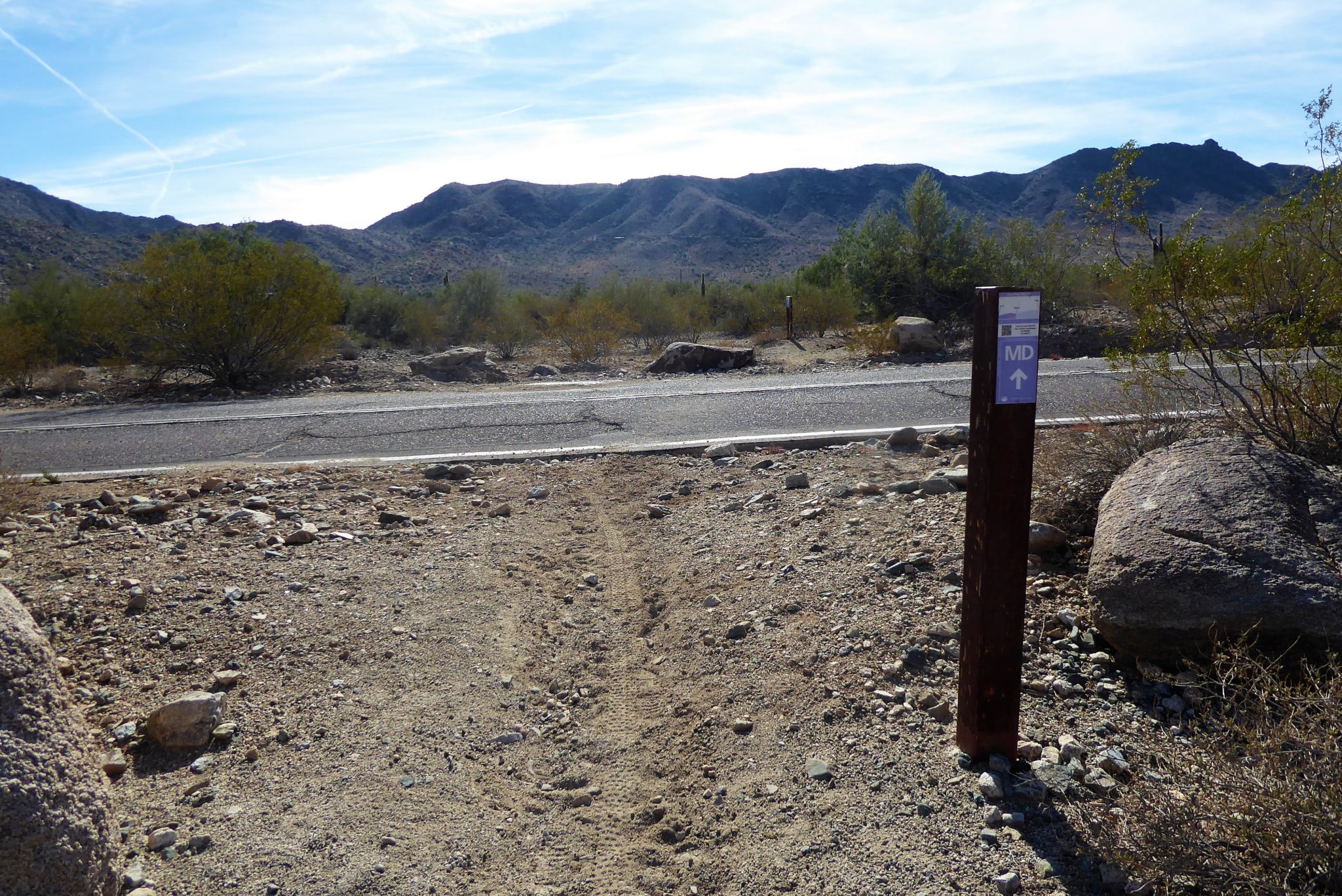 The majority of this trail is a dirt path that is clear to see and well marked with sign posts directing the way.

From Phoenix, take the I-10 and exit off of Baseline Rd. Take Baseline west for about 6 miles until you reach Central Ave and turn left. Take Central Ave straight for about 2 miles and then you will enter into the park. After passing the very first guard gate you will see the parking lot directly located on your right side, across from Scorpion Gulch and the horse stables.