There is a legend that lies 40 miles East of Phoenix, within the powerful and rugged Superstition Mountain Range. This is the legend of the Lost Dutchman’s Gold, in which it has been said a plentiful but cursed gold mine still exists within these haunting mountains. This legend still today entices treasure hunters from all around to explore Superstition Mountains for this lost gold.

The beginning of this legends starts at Massacre Grounds. It has been said that in the 1840s there was a group of Hispanic miners working for the Peralta family and mining the area for gold. After the war in 1848 the land became Arizona territory, meaning that the miners and Peralta family would soon have to return to their homeland. In an attempt to bring home as much gold as possible, these miners began mining in different locations. In one of these areas they found a vast amount of gold and starting excavating the land. The only problem was that this was on Apache sacred land. The Apaches asked the miners to stop, but the miners in their greed ignored the Apache warnings and went on excavating. The Apaches decided they needed to make an example out of these miners. 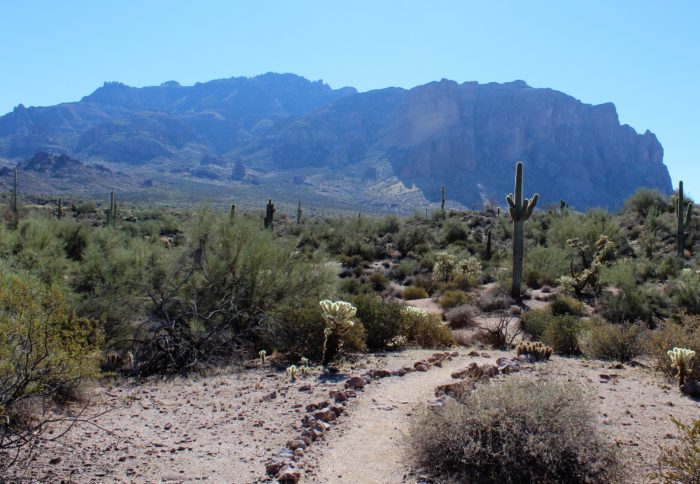 They had joined forces with other surrounding tribes and came up with a game plan to herd and attack the miners into an isolated area where they would have no chance of escape. Massacre Grounds Trail follows this attack route from the beginning to the miners unforeseen end.

“And some things that should not have been forgotten were lost. History became legend, legend became myth.”

This trail begins relatively flat and open with a few up and down slopes leading the way through low desert plants such as teddy bear cholla gardens and prickly pear cactus emerging from the dusty ground. The trail slithers its way through the landscape bringing you closer and closer to the mountain. Images filled my head of the scene of surprised miners jumping onto their horses being chased by the Apaches and heading the only way they could; towards the mountain. 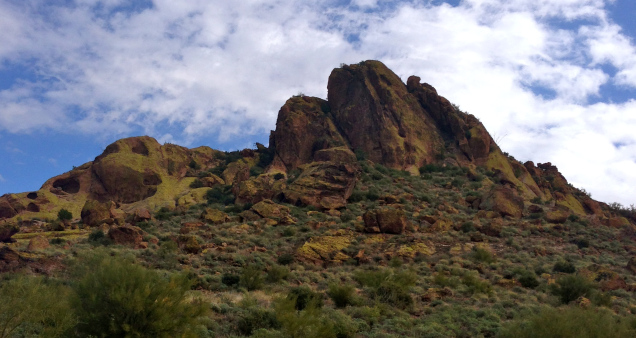 Upon reaching a fence area let this be a sign that the trail will now gradually become steeper and you are now entering the actual mountainous area. The first rock formation that greats you will be on your left. This unique formation of rock is covered with lush green moss, a rarity to see in the sun ridden desert. 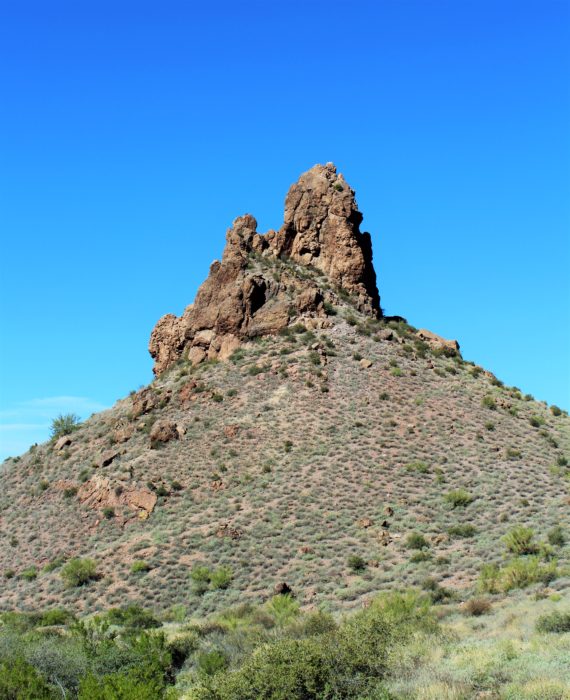 As you pass this welcoming formation you will then see a pointy formation ahead of you and towards the right. You will be seeing this formation throughout the rest of the hike as you will be able to view it from different angles. It is past this point that the desert floor begins to change from flat dirt to inclining loose rocks and carved out ditches. So in essence, time to start watching your foot placement!

Throughout the remaining portions of this trail you will have moments of inclines followed by flatter areas of washes, which surround the trail with lush green vegetation and sandy areas — only to then be followed again by more loose rock inclines. 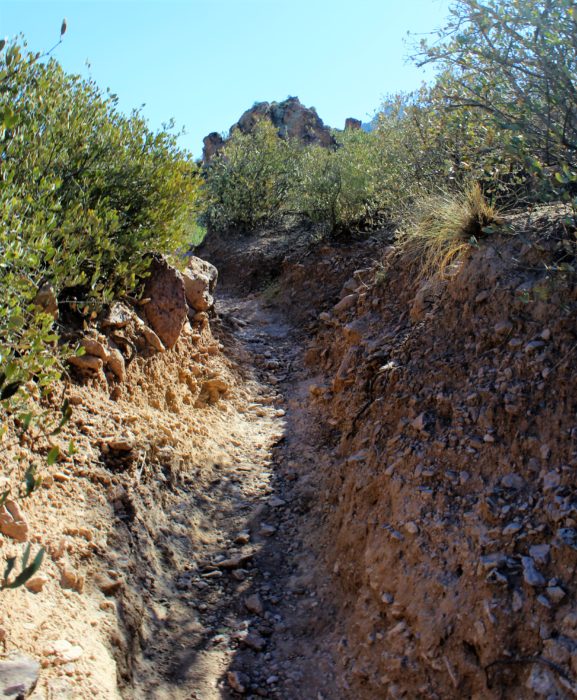 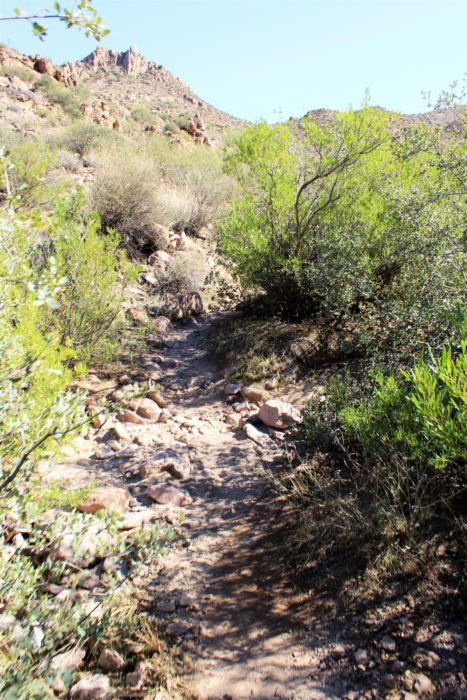 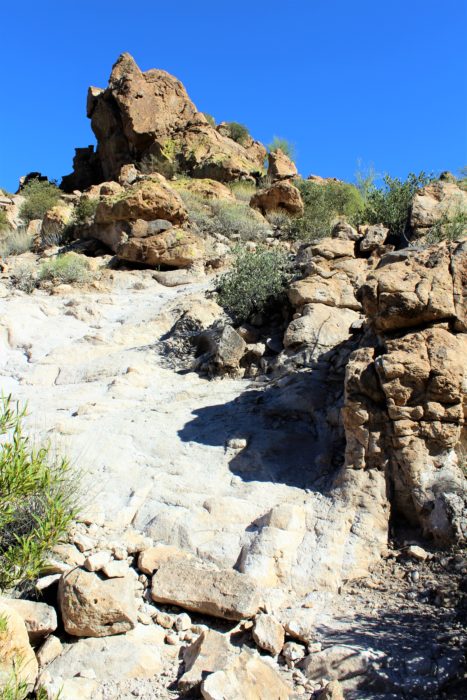 As you advance, you will see cliff walls in the distance to your right. You may naturally think that this trail will lead you to those cliffs and that you would be able to advance higher on top of the mountain. I’m sure that’s what those miners thought as well as they were running for their lives. Instead, at 2.52 miles the Massacre Ground Trail abruptly ends. 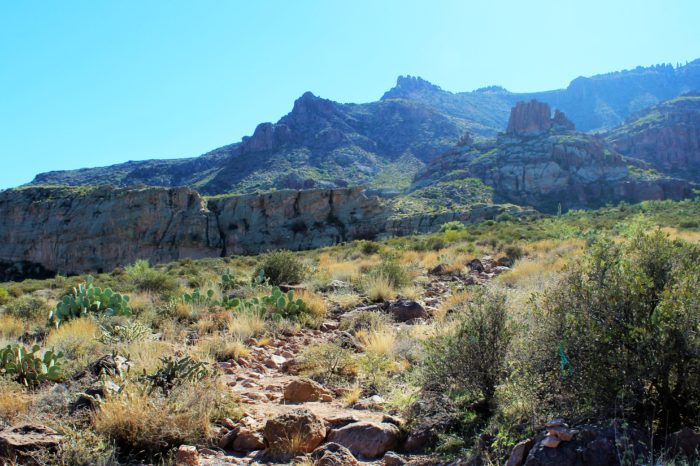 You enter a flat area overlooking those cliffs on your right and then you will discover that you, yourself are also on a cliff — a cliff with nowhere else to go other than the way you came. If the legend of the massacre is true, then this would be the perfect spot to corner your enemy. On this cliff, I kept looking at the ground as if there could be clues as to if the legend was true or not. This scenery knows the truth and it’s a surreal feeling knowing this landscape has witnessed so much history and will continue to witness the world long after we are gone.

This ending location serves as a place with a spectacular view of the Superstition Mountain Range. There is space to relax and enjoy a snack before heading back. There also is a rock that has a naturally hollowed out seat for two to sit in to enjoy the view. (This rock is located at the furthest point of the area to the left a little bit.) After you’ve enjoyed the view, go ahead and head back the way you came. 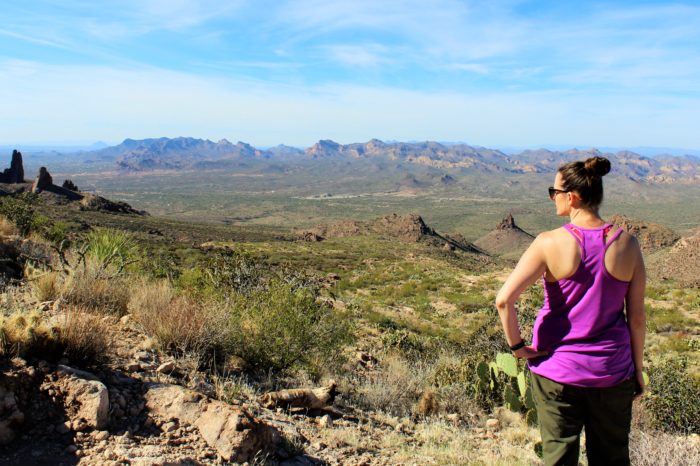 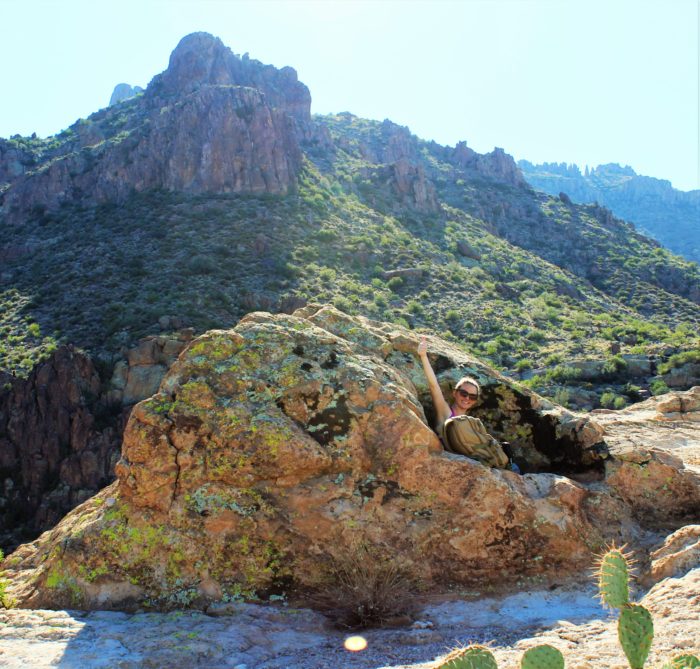 Rock Seat near the summit

Although this is the end of the trail, it’s just the beginning of the legend of the Lost Dutchman’s Gold. The secret of where the gold was didn’t die on top of Massacre Grounds. There was one survivor who is said to have made it through the massacre. This survivor later confided in a German immigrant known as the Lost Dutchman as to where the gold was. When the Lost Dutchman passed away years later the secret to this golden mine passed with him. It’s not uncommon to see hikers with metal detectors on this mountain who are still in search of the lost gold. Many to this day believe in the legend and there is a haunting feeling while on this trail, that this mountain knows the secret.

Notes:
No bicycles allowed
Dogs allowed on leash
Best to wear pants, lots of cactus, close to the side of the trail
Bring plenty of water 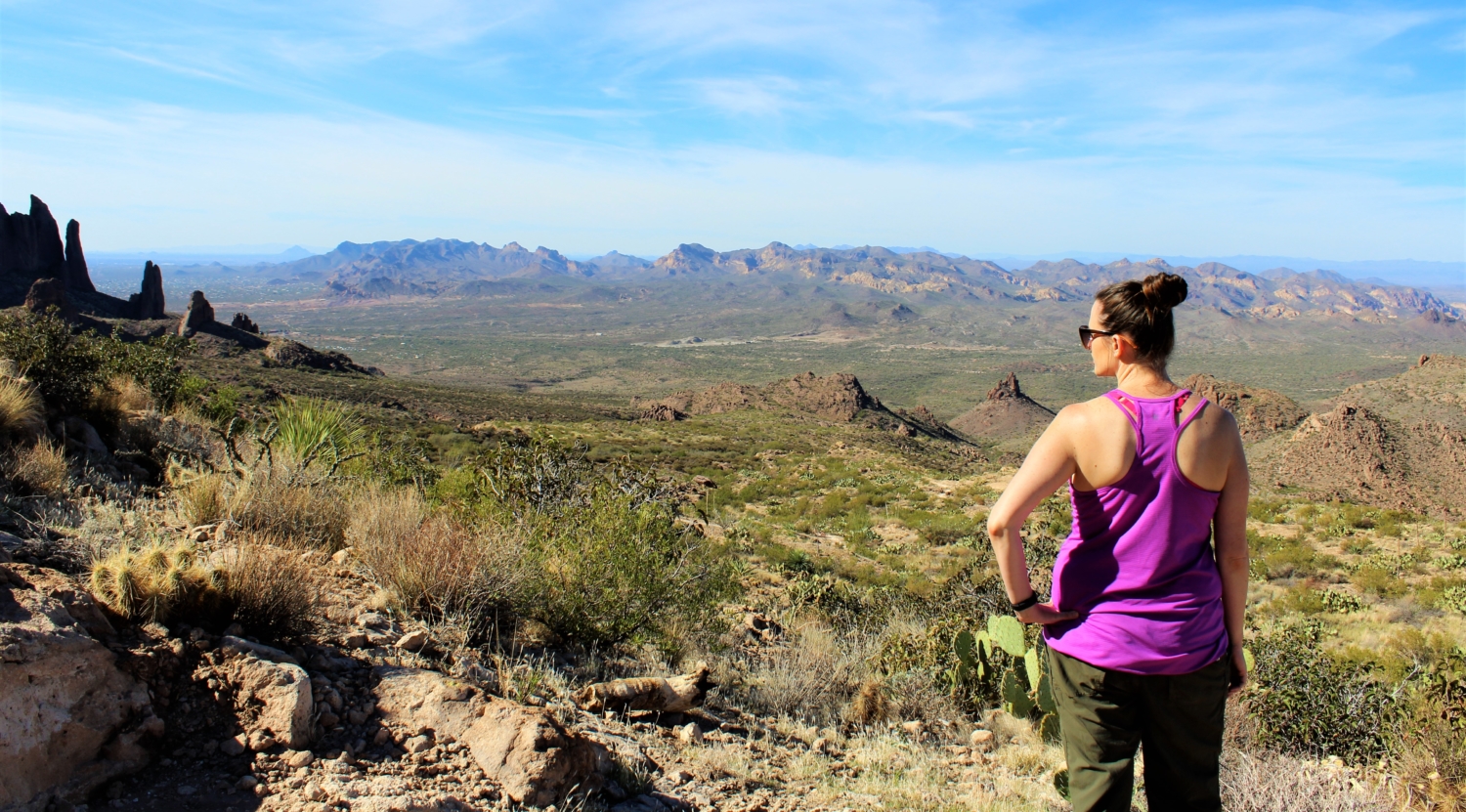 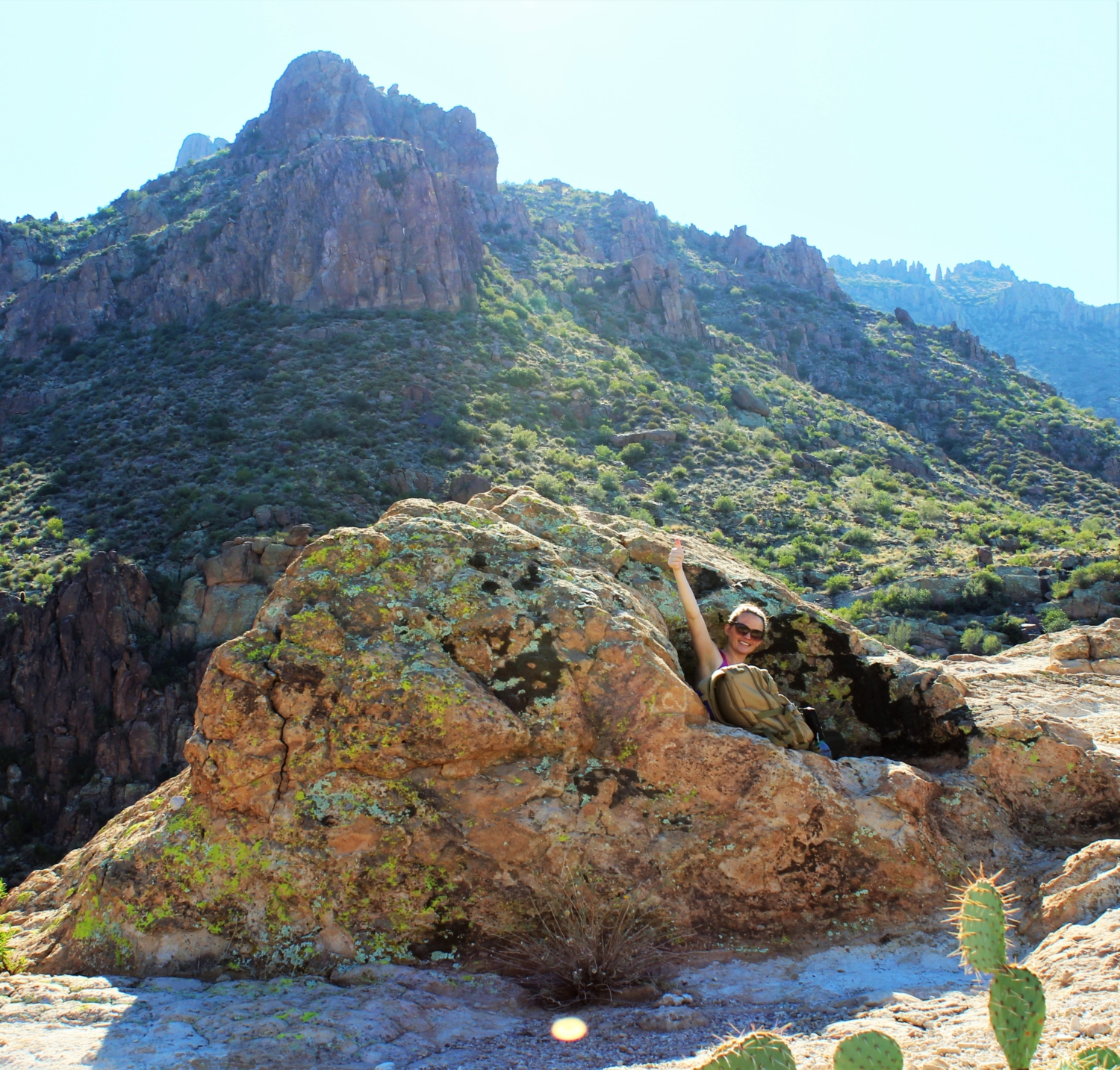 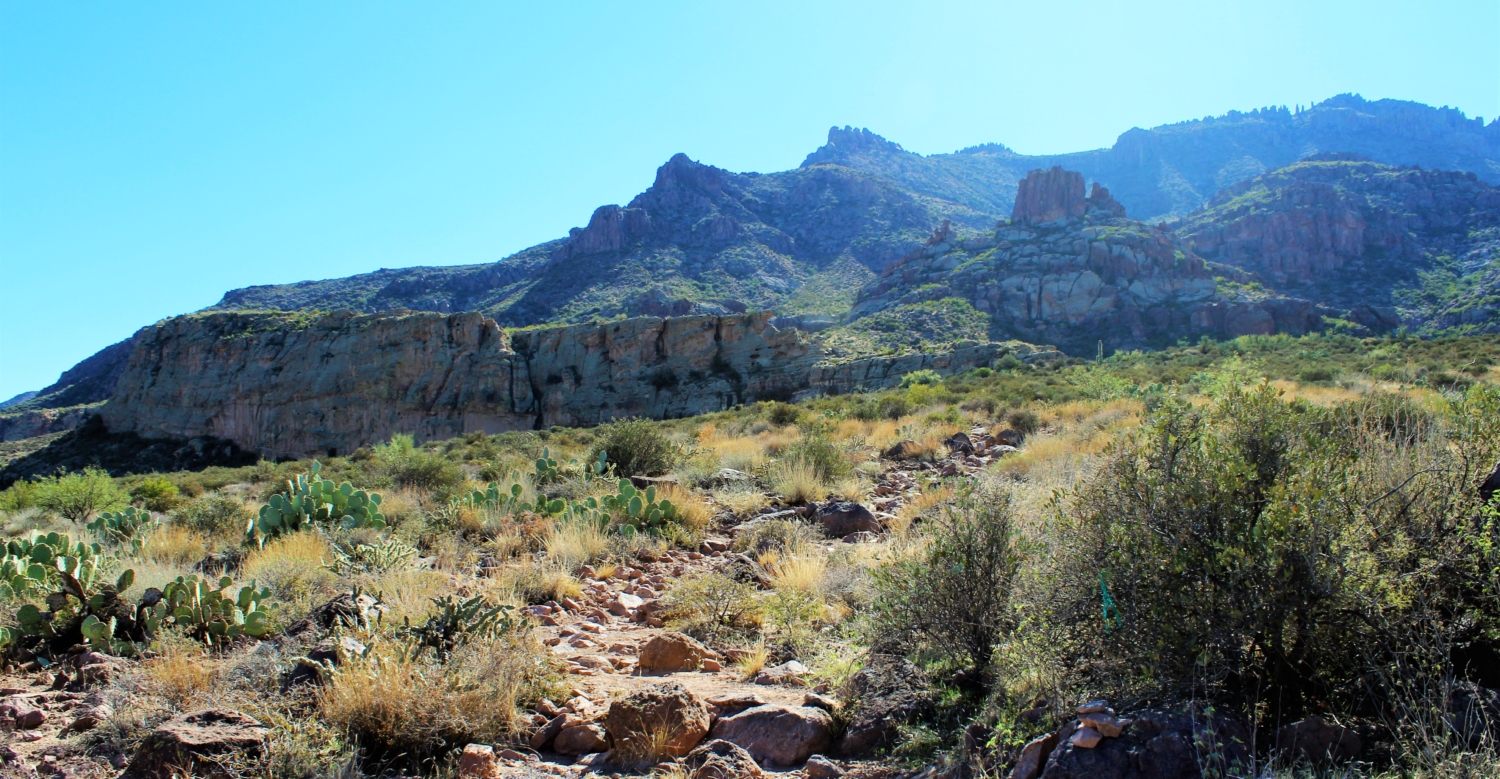 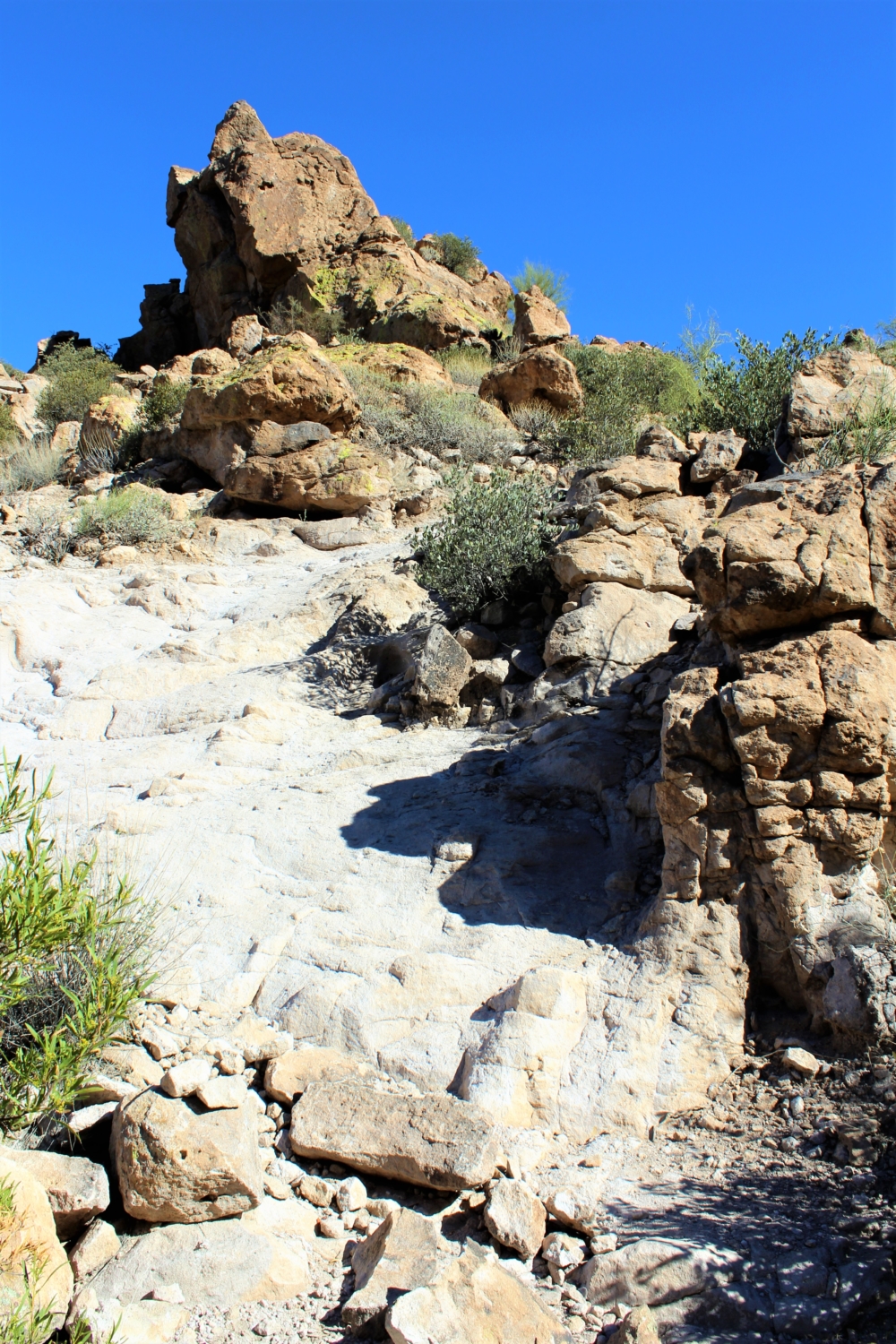 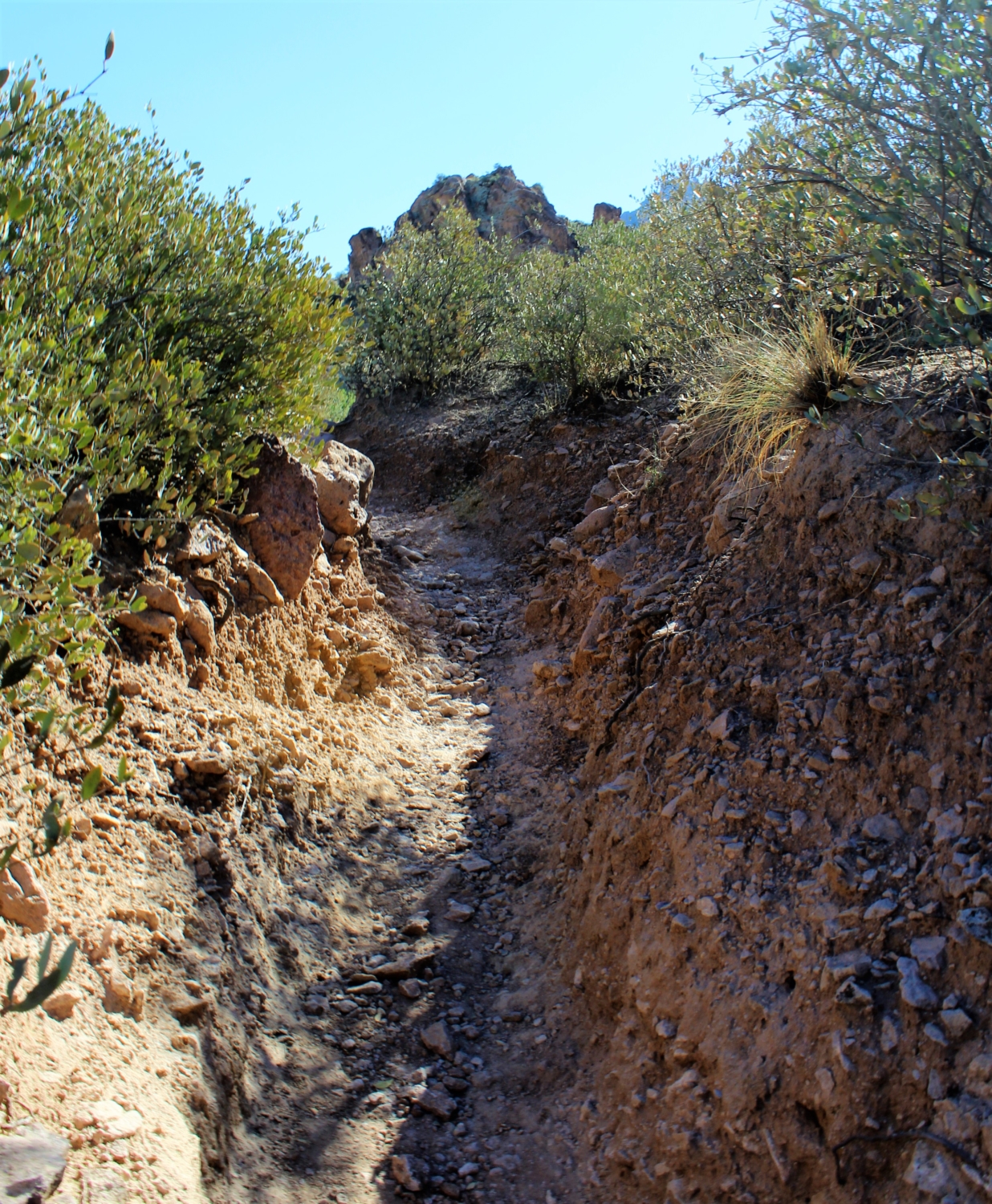 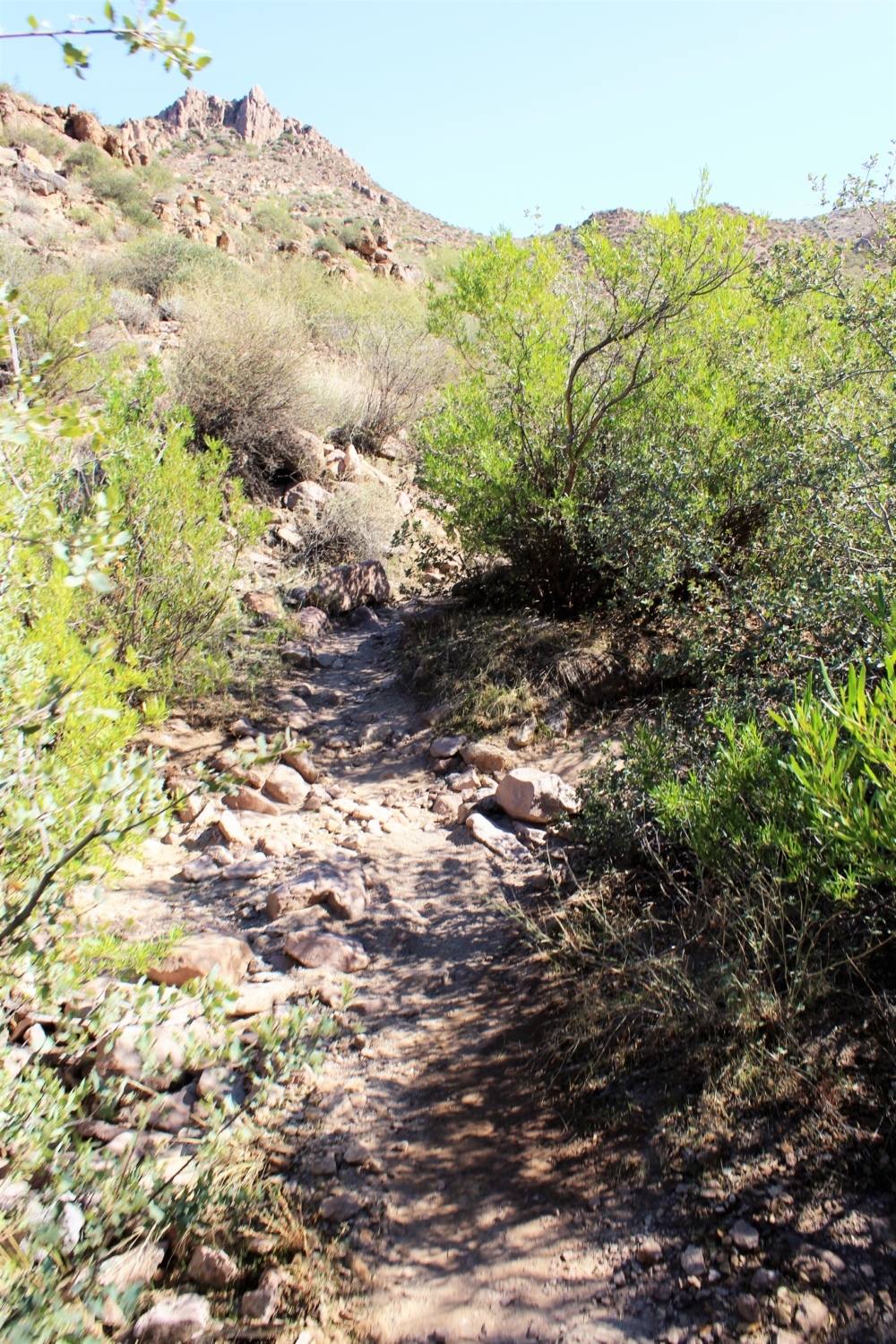 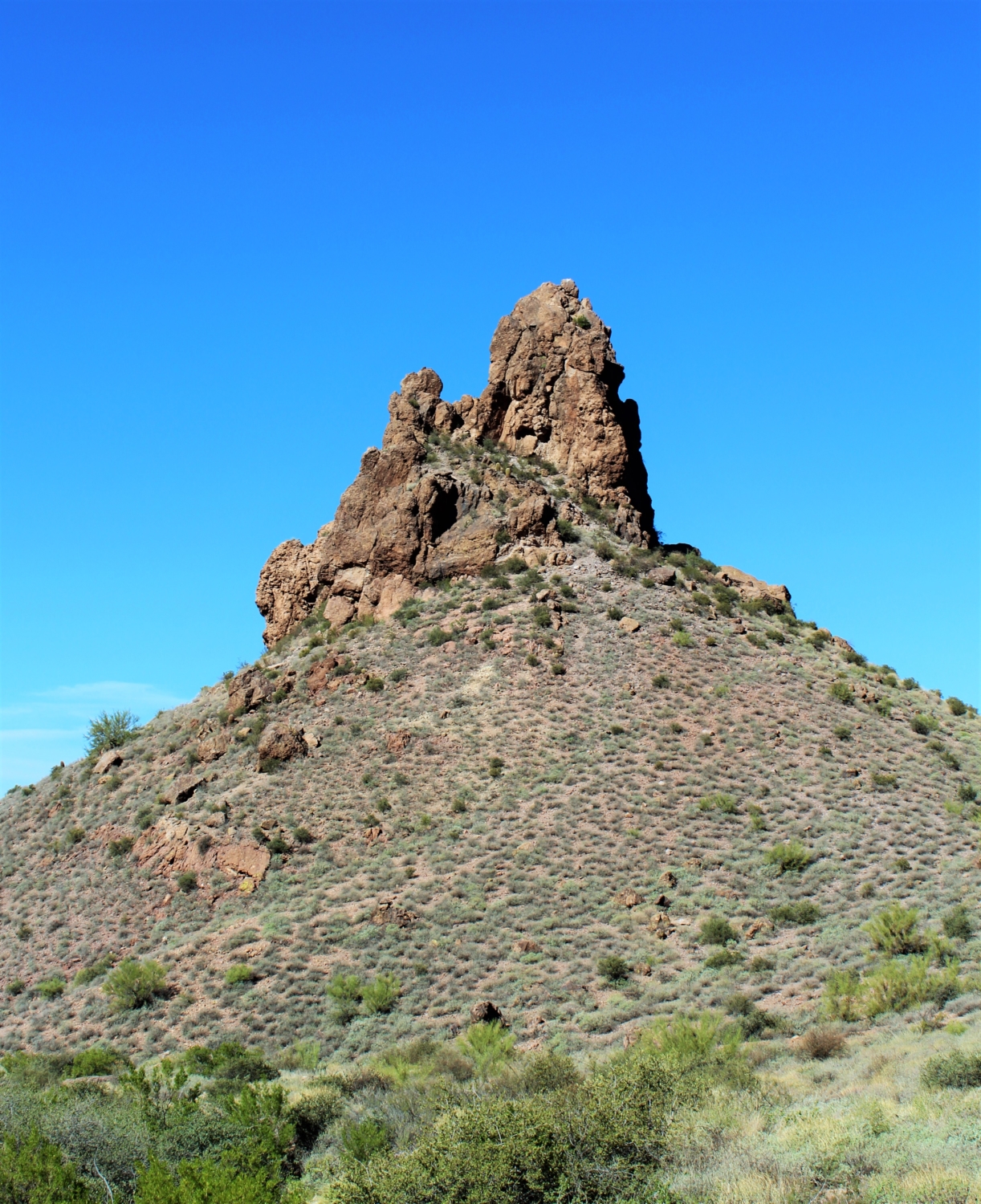 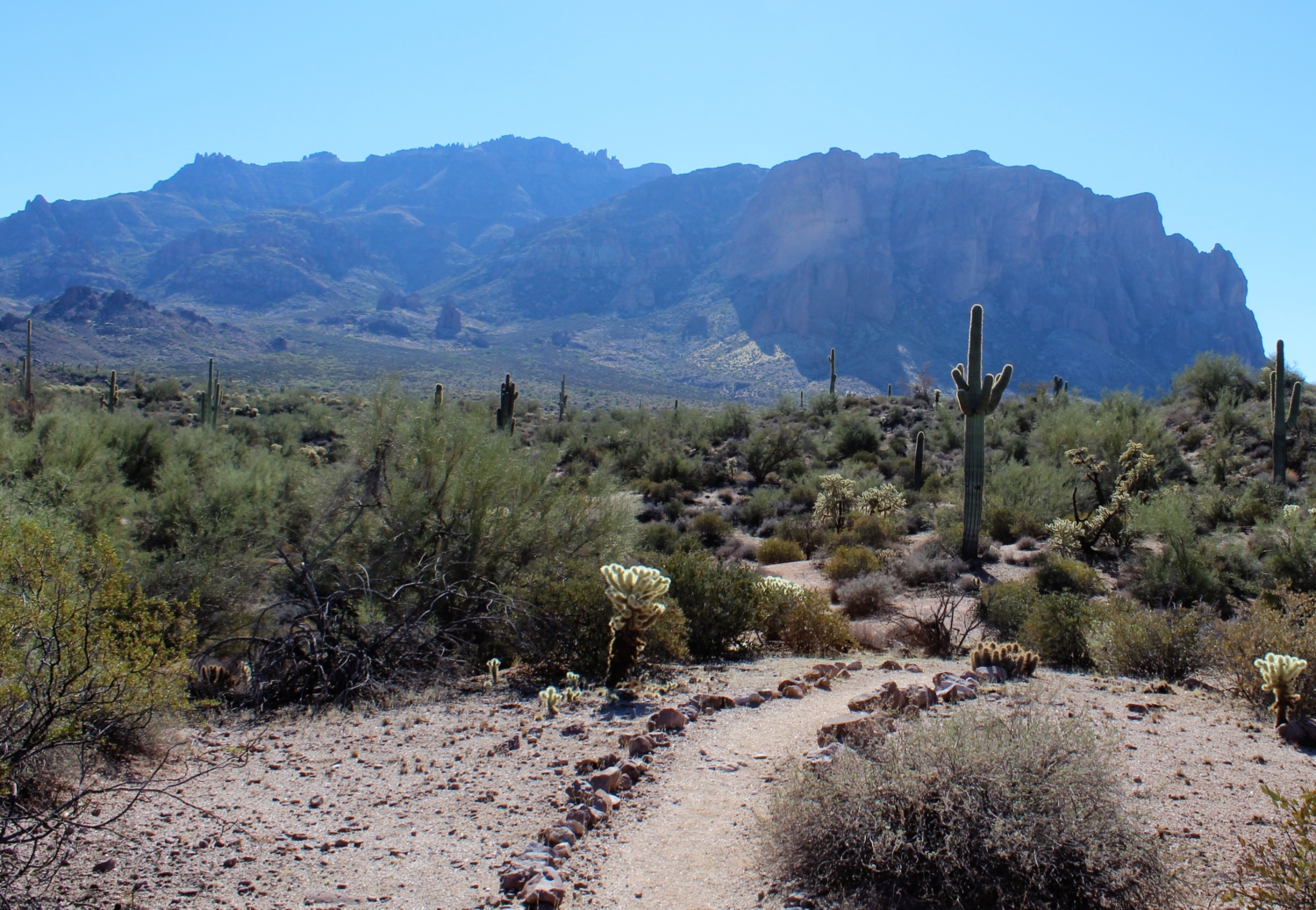 Condition Clear trail, although no trail posts. Trail is marked by cairns. Hard to see trail head sign, but trail begins to left of parking lot thru an opening in the fence and upon entering wash, the trail continues slightly to the left

Nearest campsite located in the Lost Dutchman State Park. They have electrical and non-electrical campsites ranging from $15 to $50 plus a $5 non-refundable reservation fee. For more information, you can call: (520) 586-2283

From Phoenix take the U.S. 60 East to Idaho Rd. Left on Idaho then a right on HWY-88. At 0.7 Mile turn right on First Water Trailhead (you will pass the Lost Dutchman State Park). Drive 0.5 Mile on this dirt road until you see sign for Crosscut Trail on right. Park here. Trail head is located to the left of the parking lot and you will see Massacre Grounds written on metal post.