The trek to San Vicente Mountain via Mandeville Canyon is a popular Westside hike tucked away in the Hollywood Hills, where it’s well-known by the locals who frequent these dead-end canyons but not often visited by the region’s hikers at large. Those who do show up (and can manage to find parking) will be delighted by the broad fire road trails with sweeping canyon views, while history buffs will get a kick out of visiting the site of LA-96C, an important part of the Cold War era Nike Missile Defense System that ringed Los Angeles and many other cities around the United States.

Head north from Sunset Boulevard on Mandeville Canyon Road and squeeze into one of the few parking spots near Garden Land Road. To your south will be a gated entry to Water and Power Pole Road, which is where you’ll begin your hike. 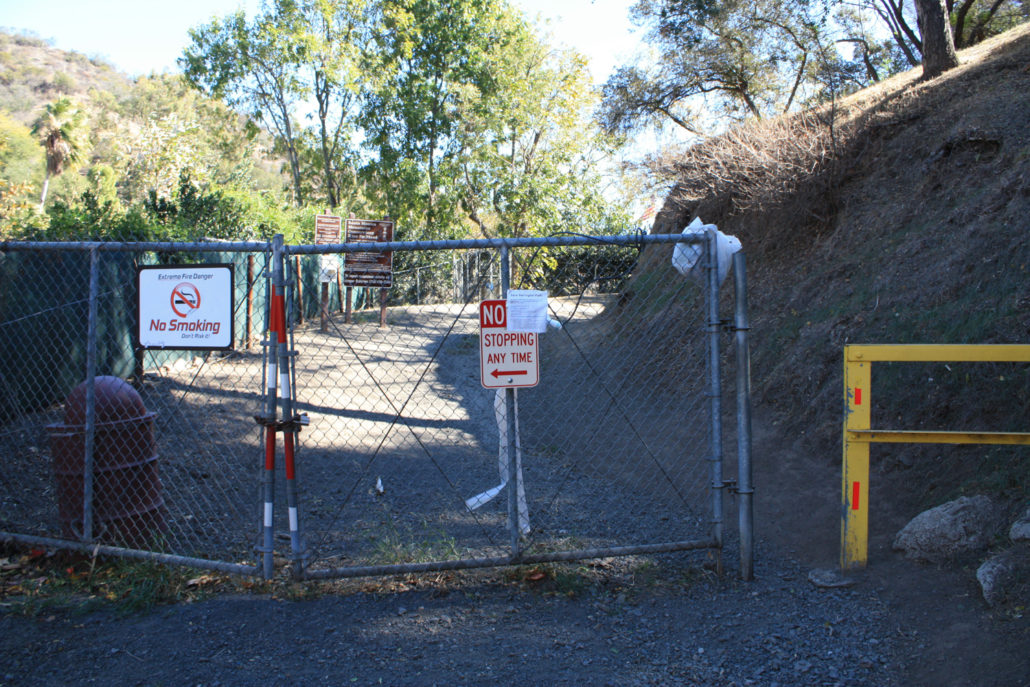 You’ll pass rusted out remains of former homes and ranches in the area as the road makes a short but steep climb up out of the canyon toward San Vicente Mountain. 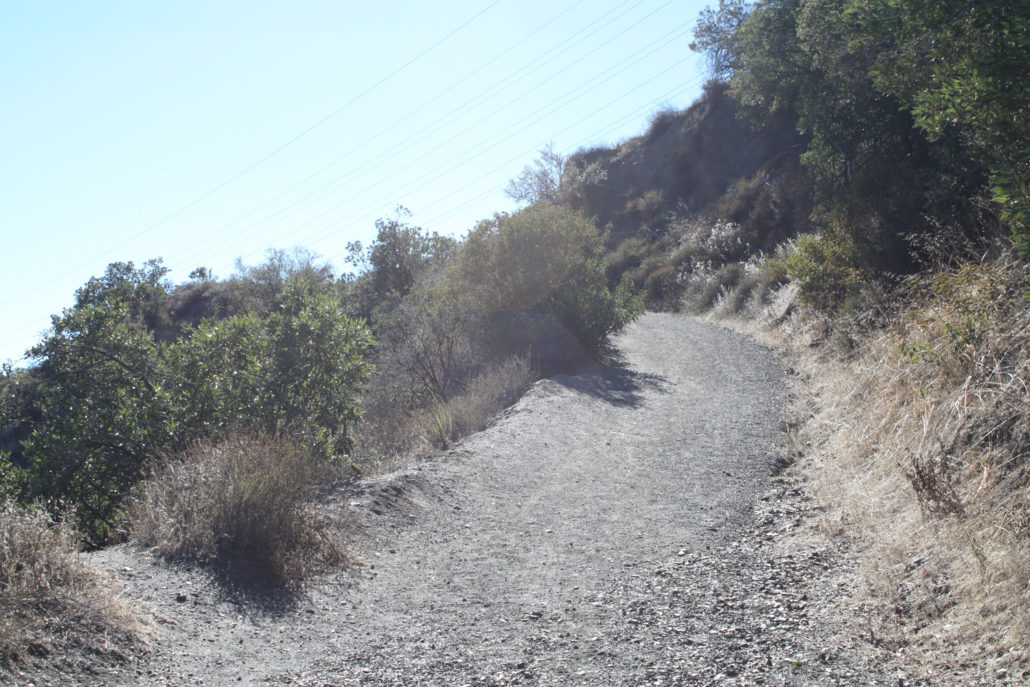 At 0.5 mile, keep a sharp right at a potentially confusing intersection where Water And Power Pole Road has an intersection with itself. Both routes appear to climb up, so it’s not readily apparent which way you’re supposed to be going here. If you do happen to take the wrong turn, though, the road eventually dead-ends, so just backtrack a bit and enjoy your extra time out on the trail.

Continue as the road swings to the north. The road flattens out but the elevation you’ve already gained will net you some nice views of the neighboring north-south canyons — and even the San Gabriel Mountains if the air is decently clear. 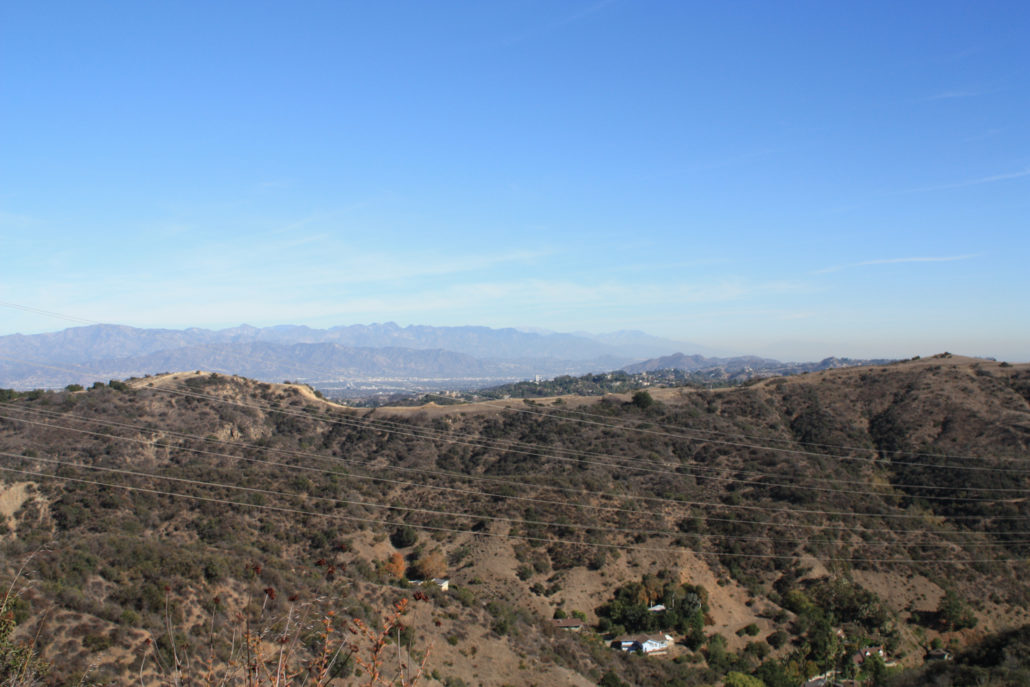 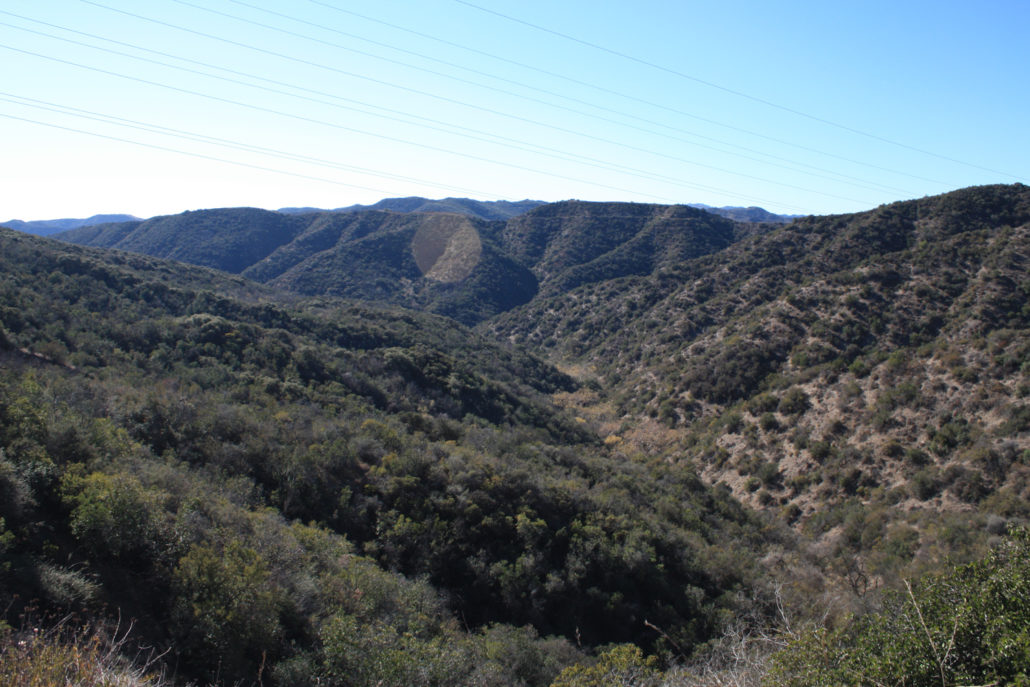 The climb picks up again at 0.9 mile, and at 1.4 miles keep right / stay straight at the junction with the West Mandeville Fire Road. Your odds of seeing some mountain bikers are greatly increased here, and looking straight ahead you should catch your first glimpses of the LA-96C facilities. 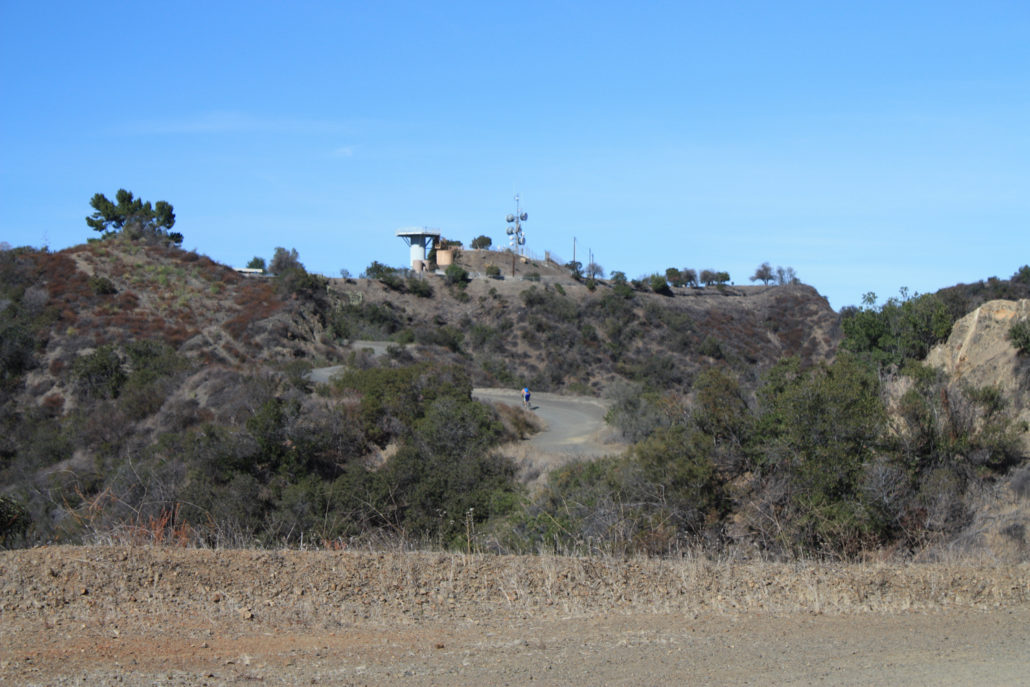 Just before the 1.9 mile mark, you’ll come upon the grounds of the former missile defense site at San Vicente Mountain and walk inside. 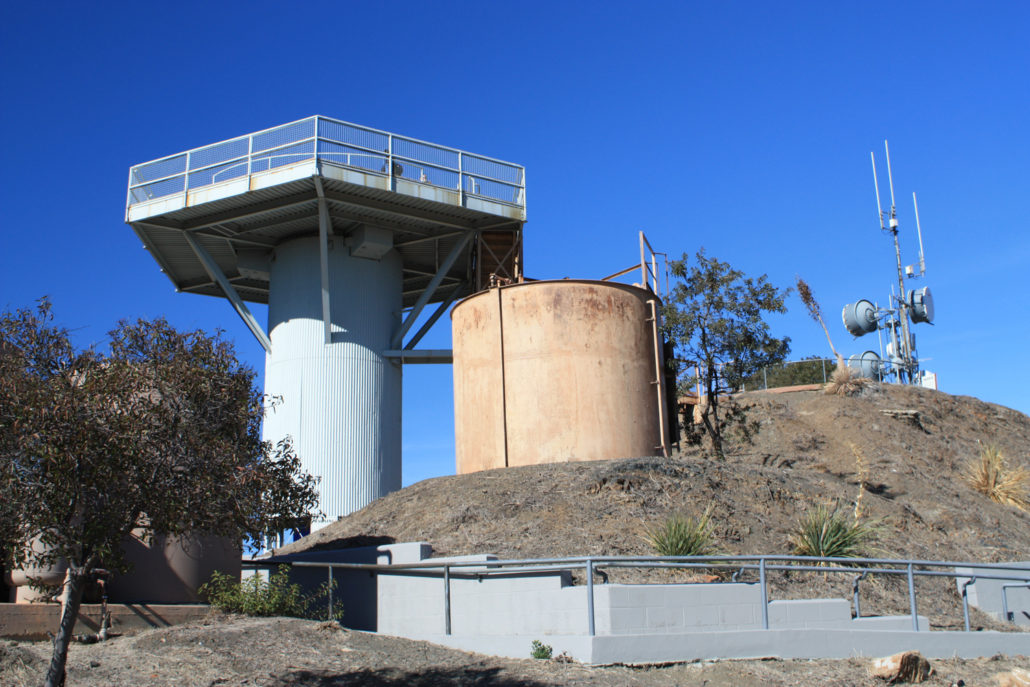 By the 1940s, Los Angeles was considered a bona-fide military target and the Department of Defense took steps to protect the burgeoning metropolis. A ring of 16 Nike missile defense lookouts, control centers, and launch facilities was built starting in 1958 to guard L.A. from Soviet bombers carrying nuclear weapons. Eventually, we figured out we could just shoot nuclear weapons at people we didn’t like on huge rockets well out of the Nike missile’s reach, and all the L.A. stations were shut down by 1974. While most have been destroyed, a few stations do remain. This example at Mandeville is by far the most intact, but you can also visit sites below Oat Mountain across the San Fernando Valley and atop Mount Disappointment.

As part of security measures, those staffing the Nike defense sites weren’t ever fully aware of what they were doing — or even how their stations were supposed to work with the broader system surrounding their cities. Different locations were built to track incoming missiles, communicate to neighboring sites, and launch countermissiles. From its high perch here in the Santa Monica Mountains, the team at LA-96C were focused on spotting incoming targets and then guiding missiles from a nearby site at the Sepulveda Basin to destroy them … but most of their time was spent just sitting around not doing much. Walk around the ruins and envision these historic places in action, their staff on constant alert to protect the city from annihilation yet also bored enough to tend to cactus gardens. Just remember, no fighting in the war room! 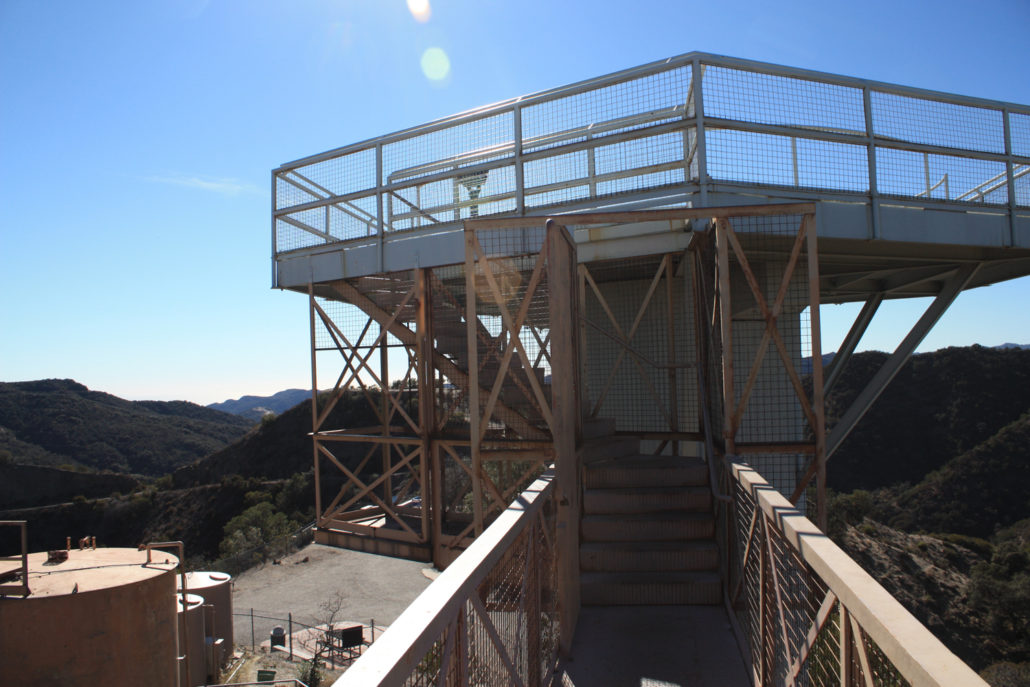 There are restrooms and water fountains here, and the area will likely be staffed by rangers. When you’re done exploring, exit on the north side of the defense site past the guard booth and turn right on Mulholland Drive. You’ll get some nice views looking back down south into Mandeville Canyon as well as sweeping views north of the San Fernando Valley and Santa Susana Mountains and Simi Hills. At 3.1 miles, you’ll reach an alternate trailhead off Mulholland Drive. Continue east into the Westridge-Canyonback Wilderness Park on the Canyonback Trail, which meanders on a high ridge toward the southeast, offering up fantastic views of downtown Los Angeles on a clear day. 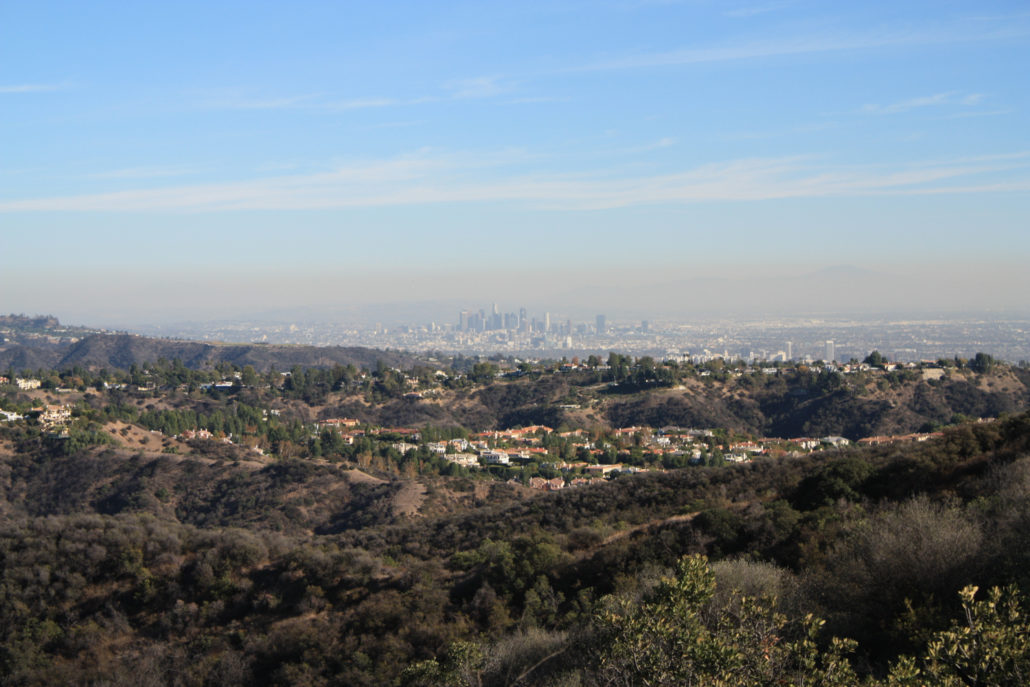 Here, a not so clear day.

Stay on the fire road and at 4.1 miles, make a sharp right to descend back toward Mandeville Canyon Road through a surprisingly lush section of oak forest and scrub. 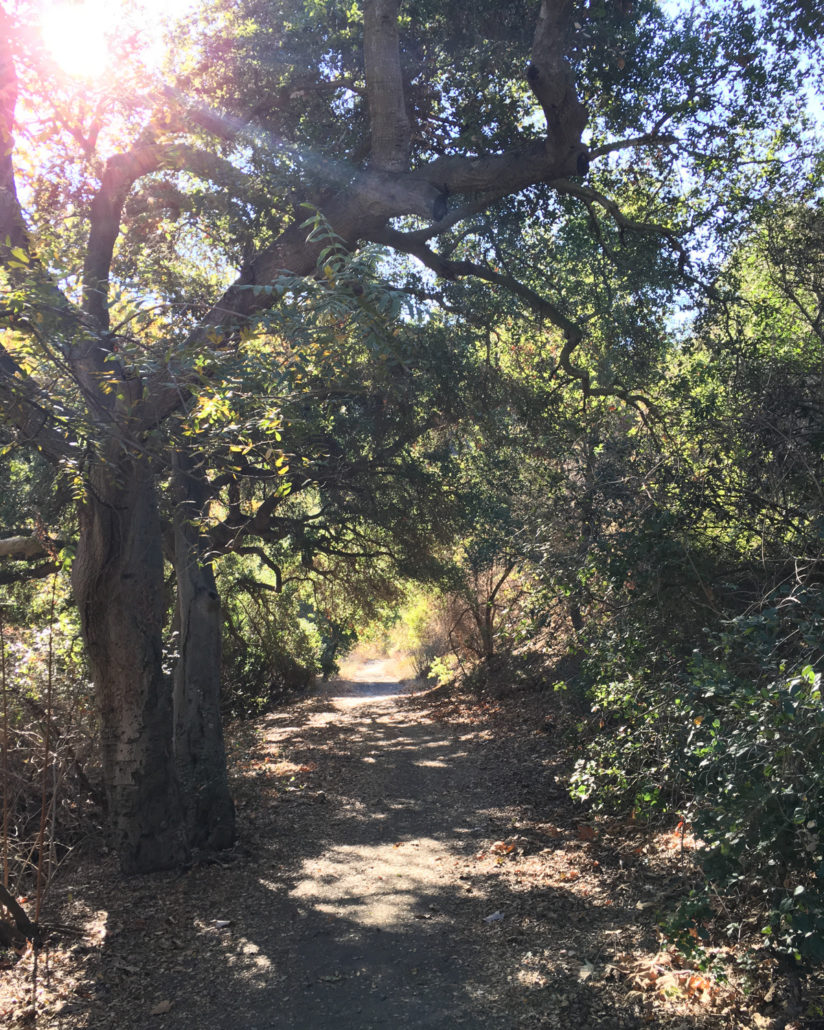 You’ll reach Mandeville Canyon Road just before the 4.9 mile mark. Keep right to head north back toward your parking space and be careful — there isn’t much space on the side of the roads here. 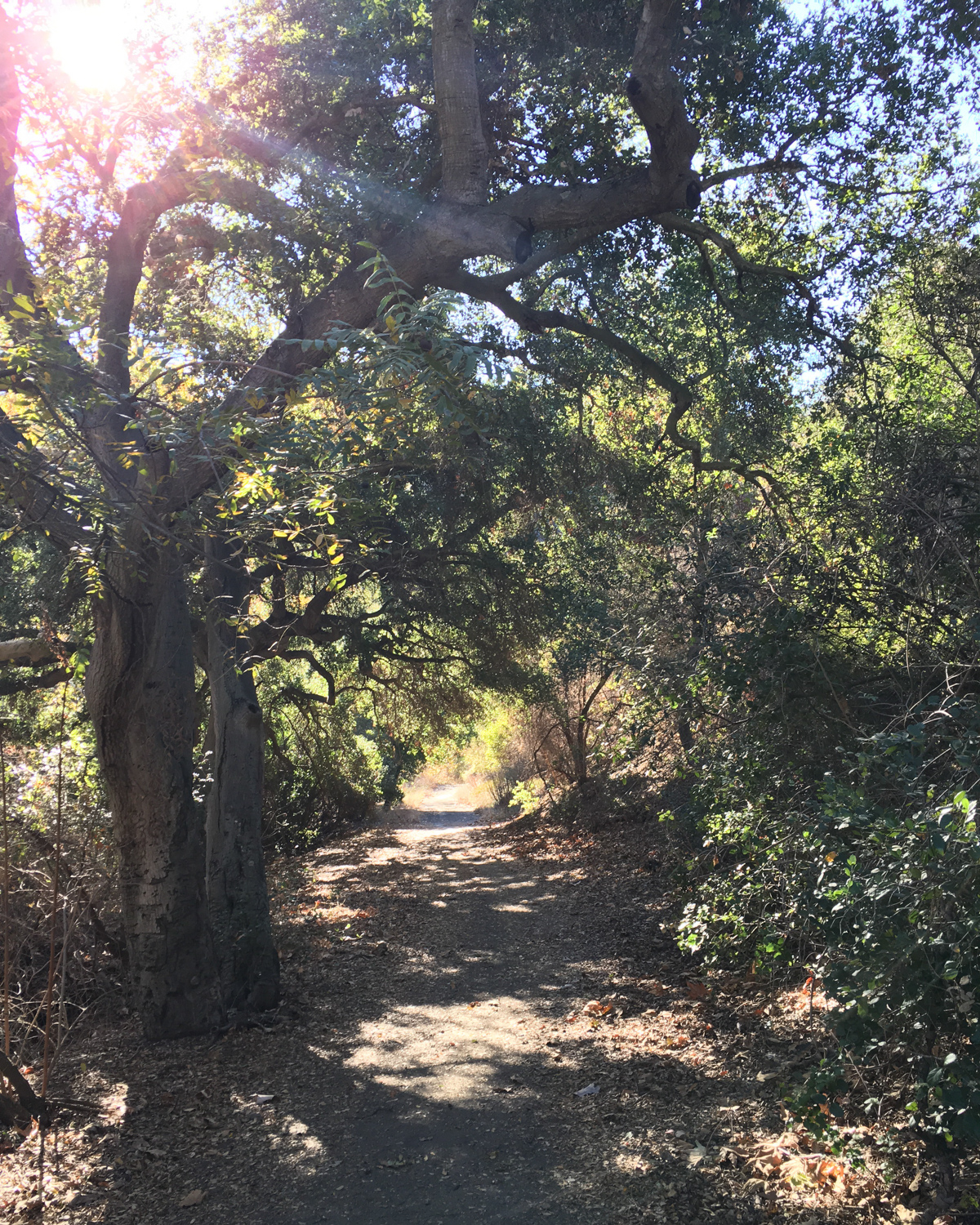 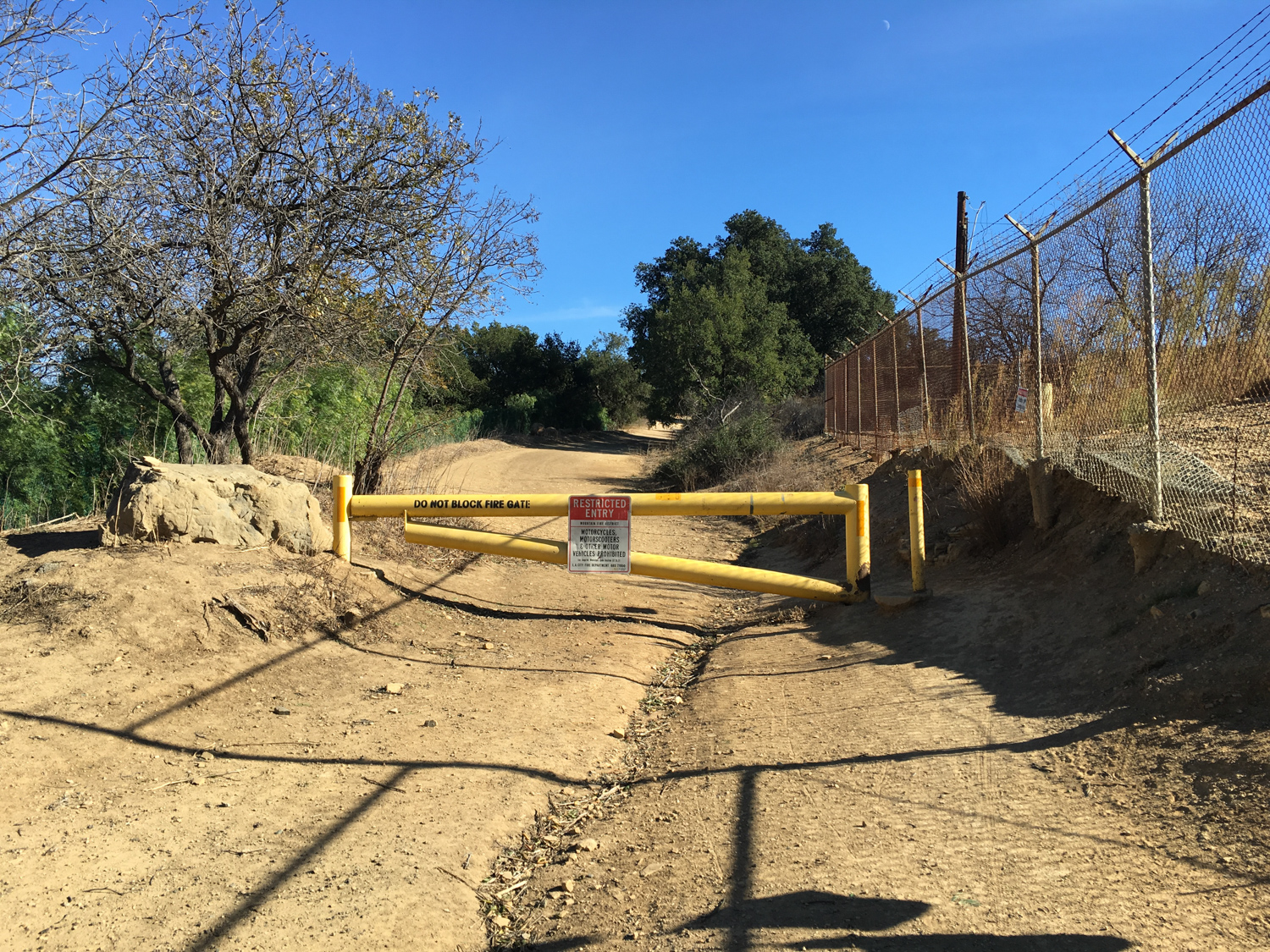 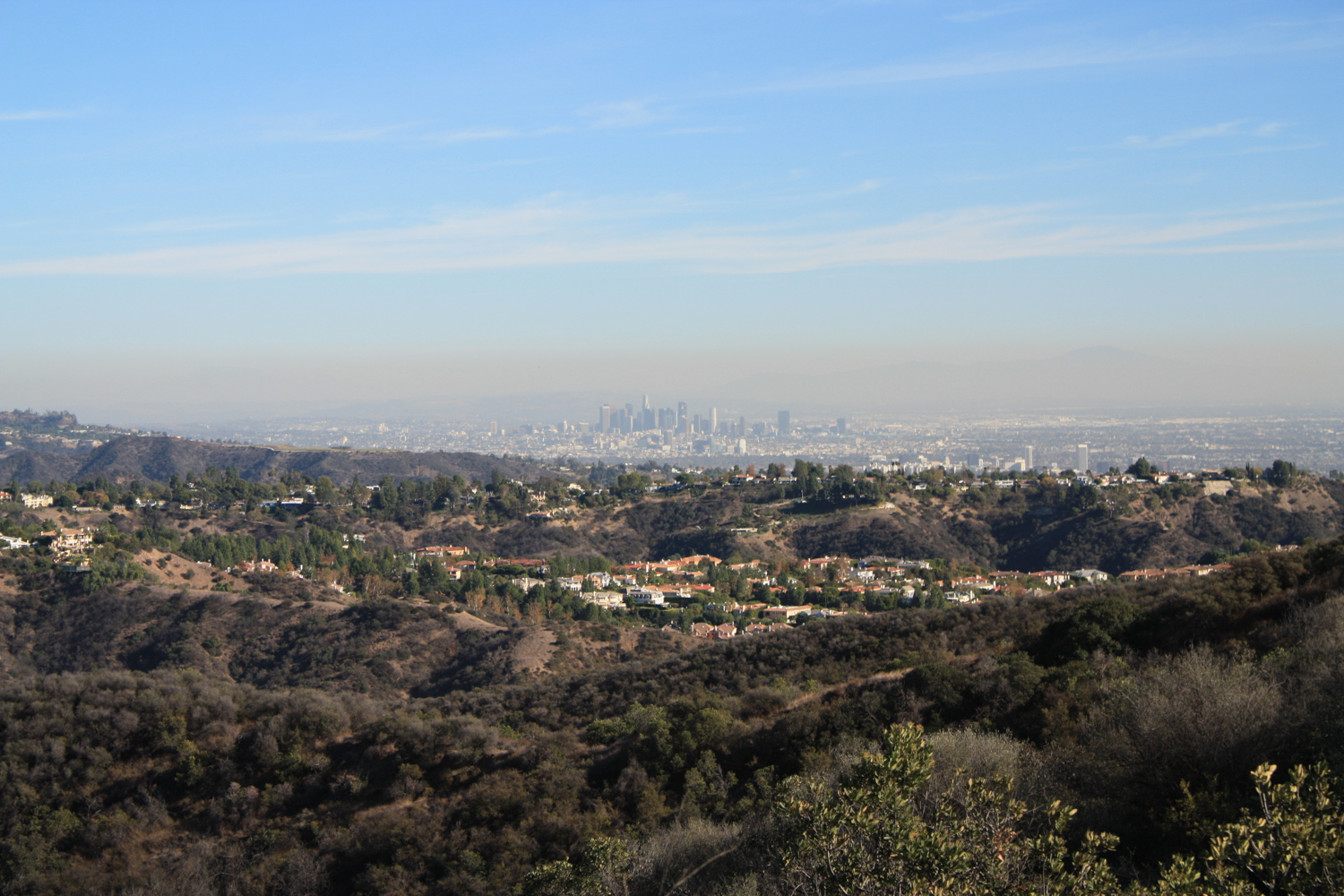 Here, a not so clear day. 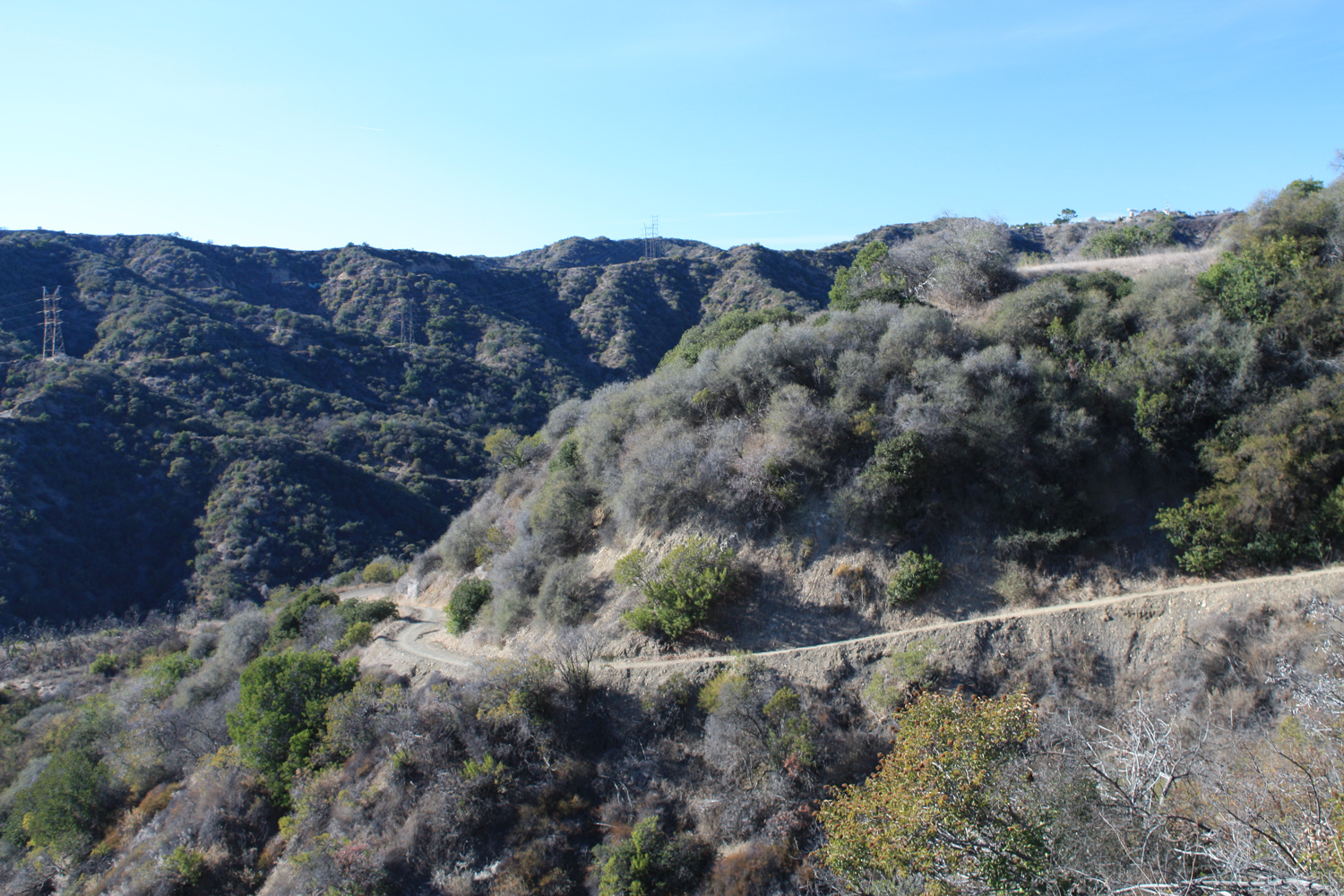 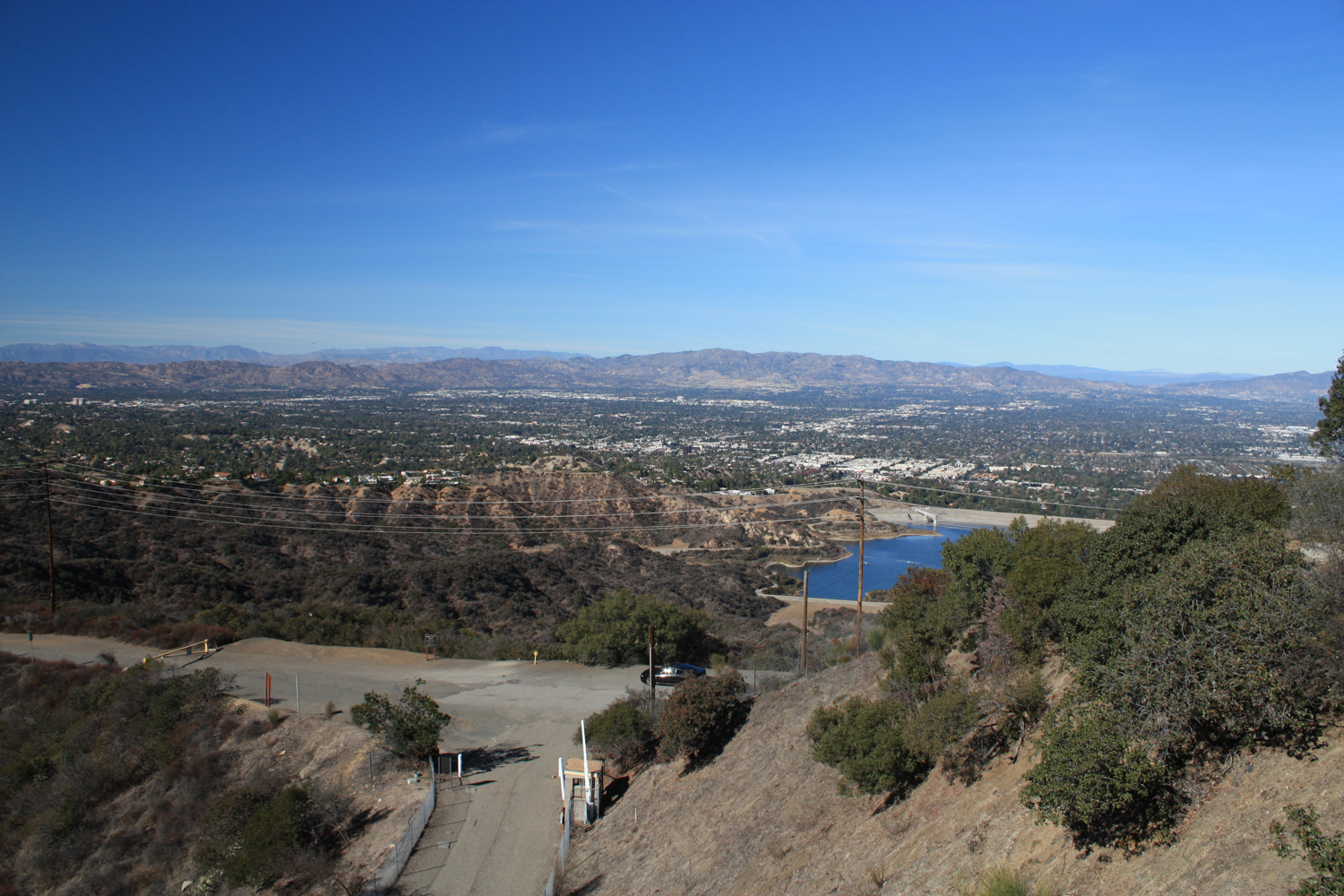 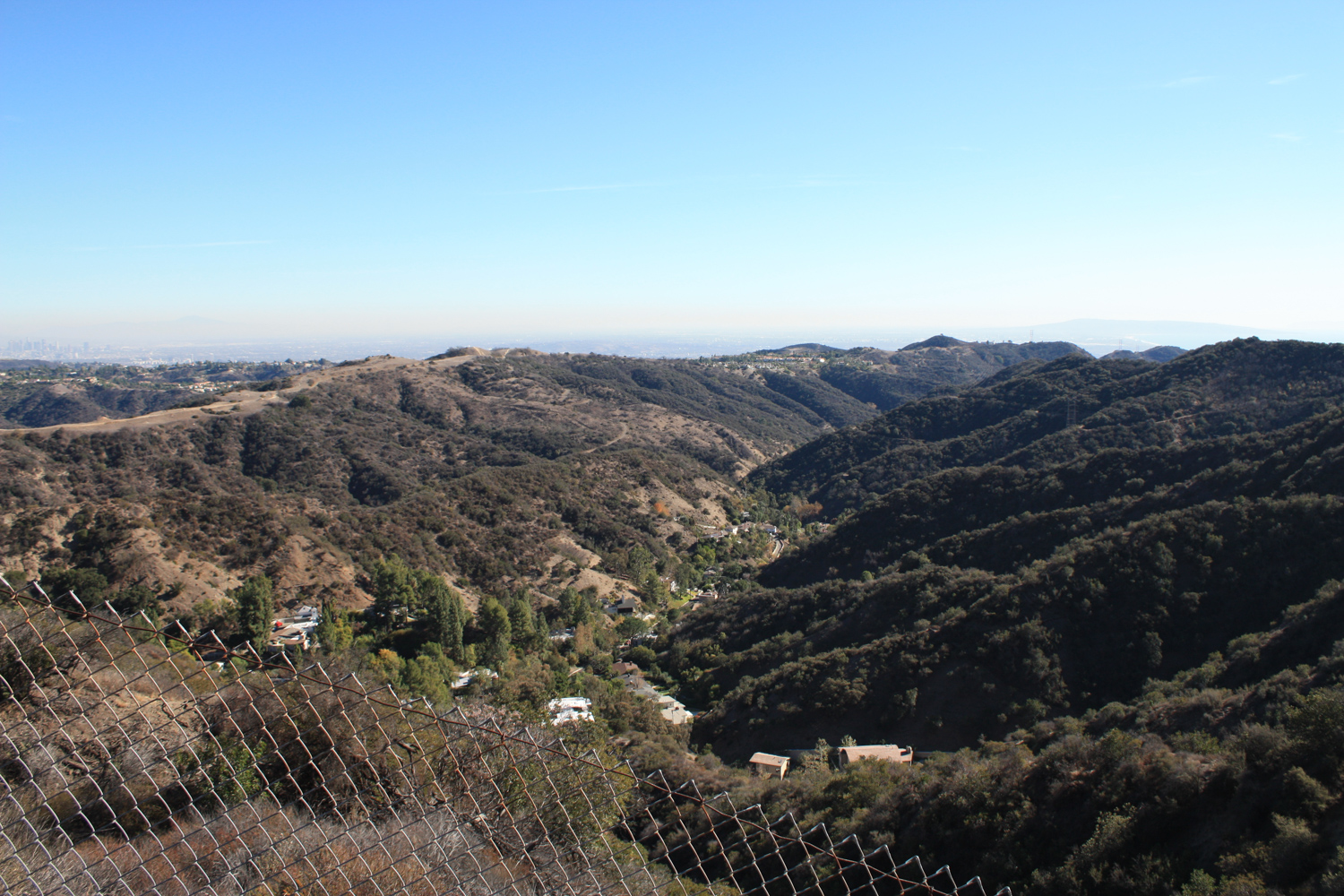 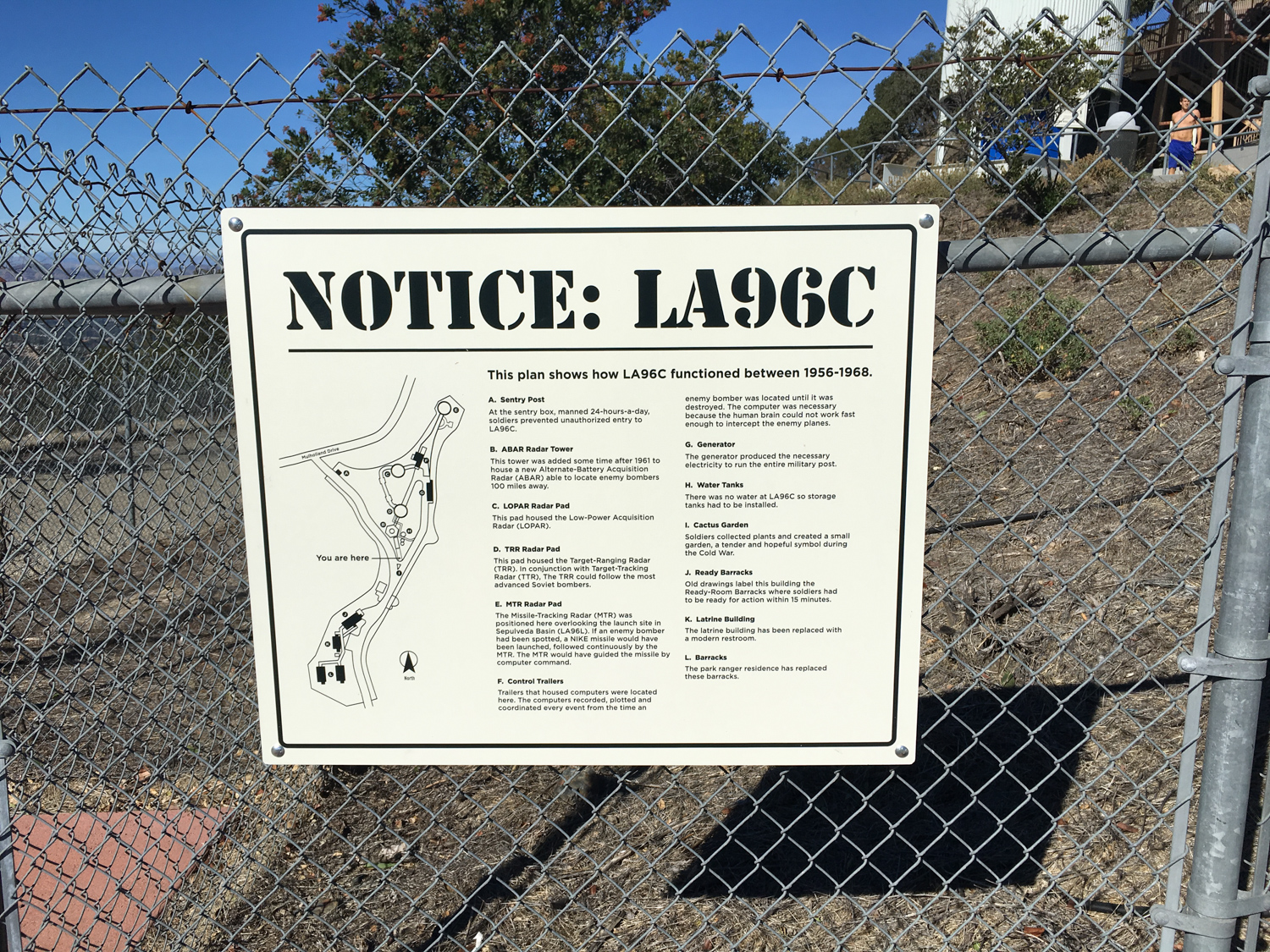 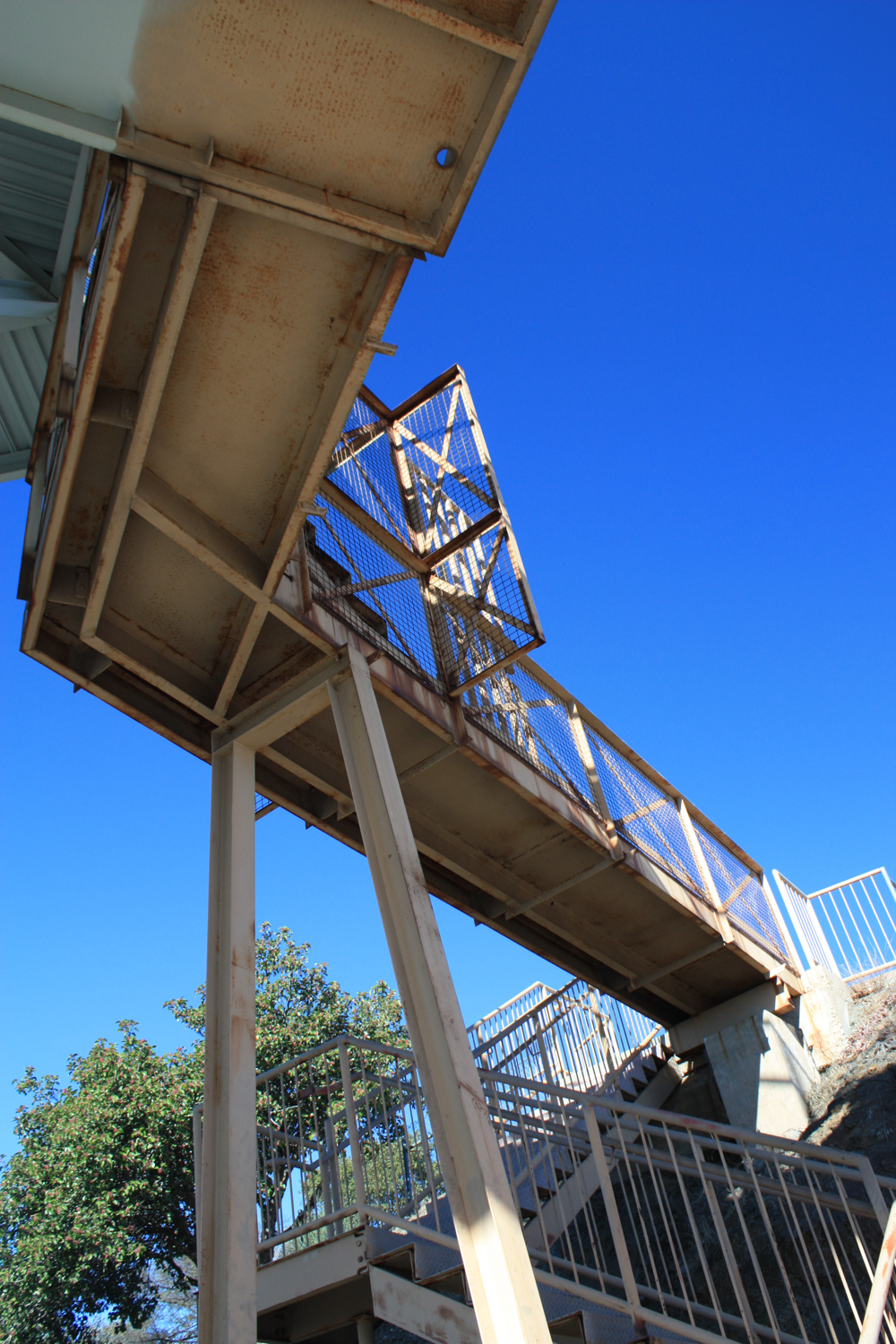 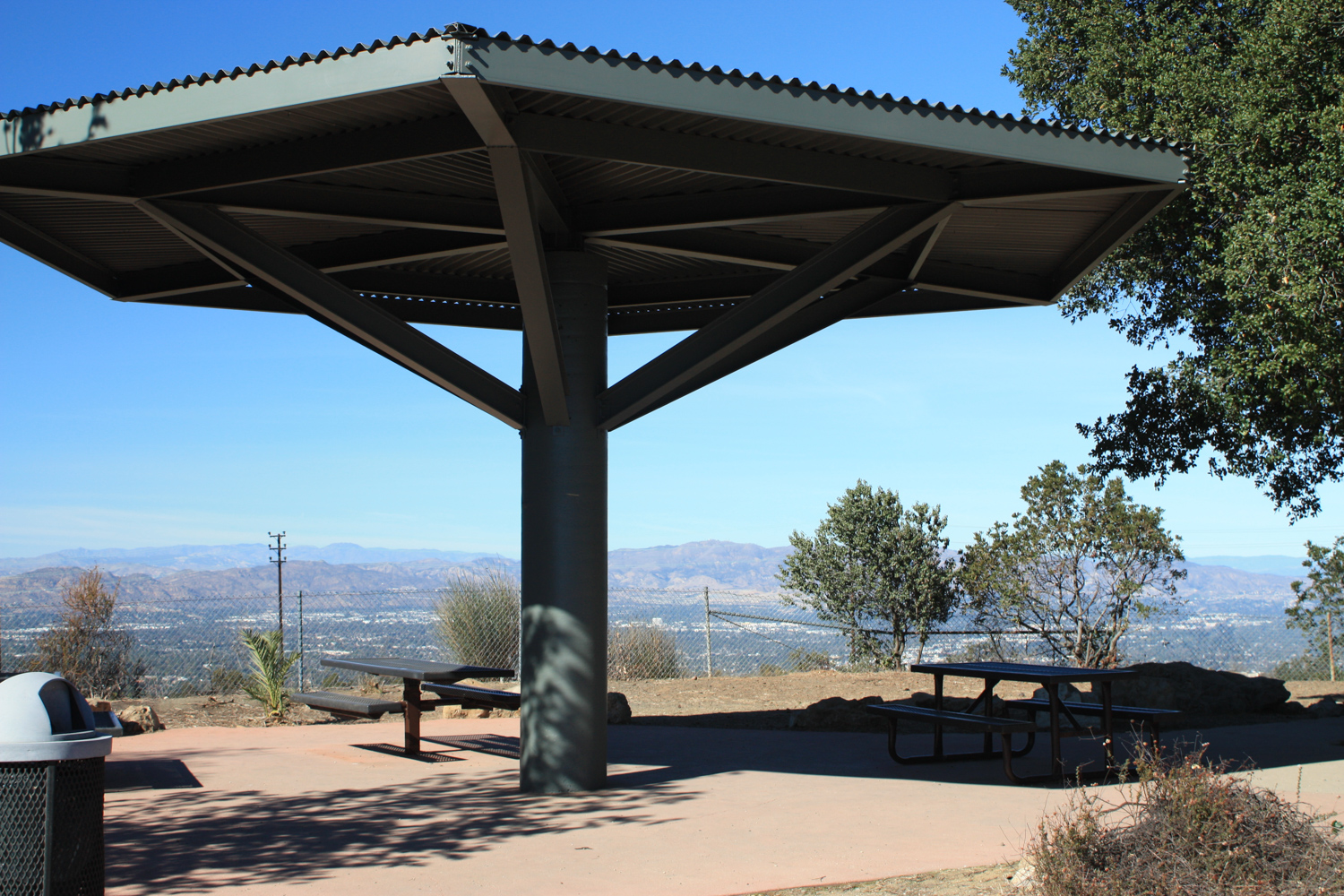 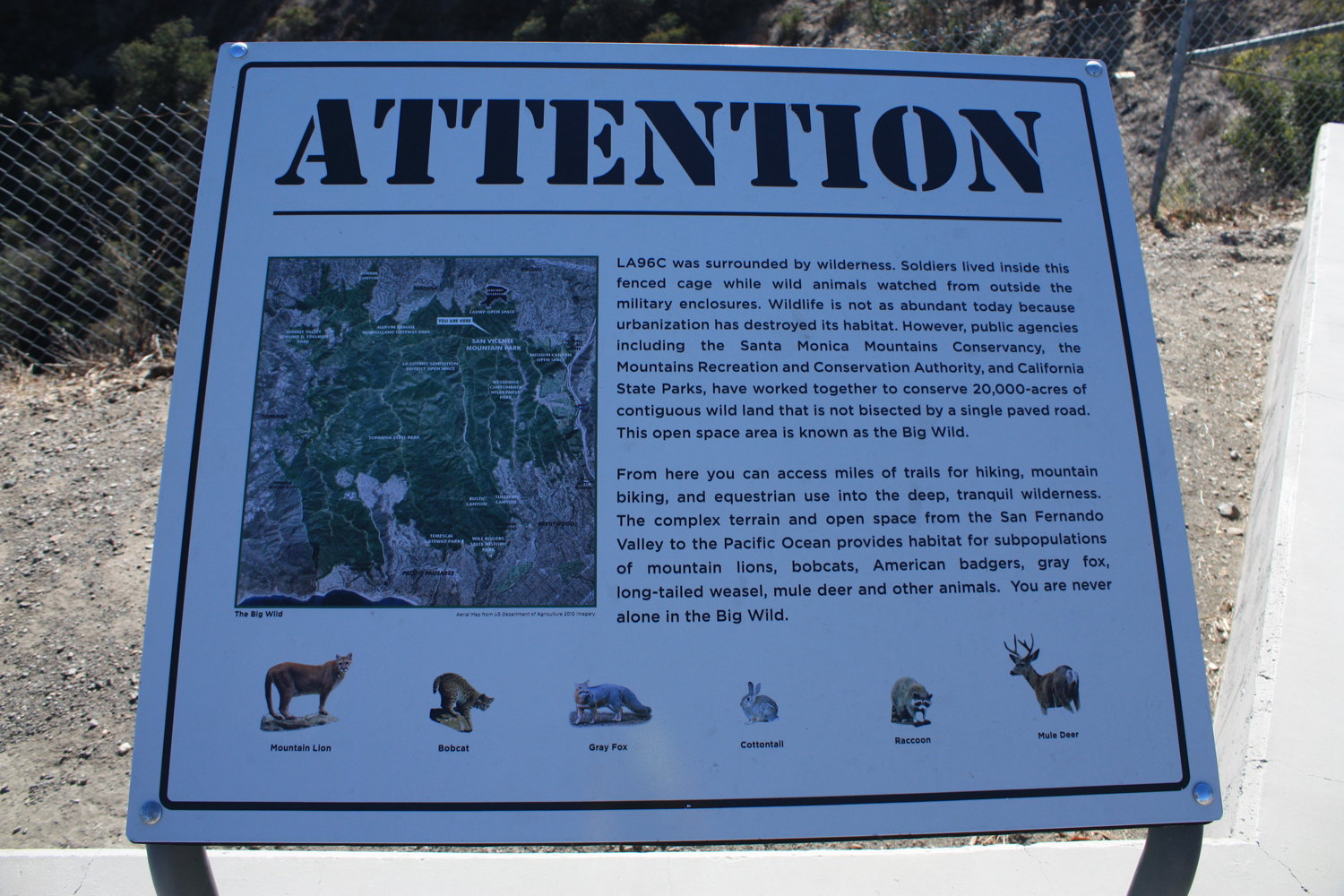 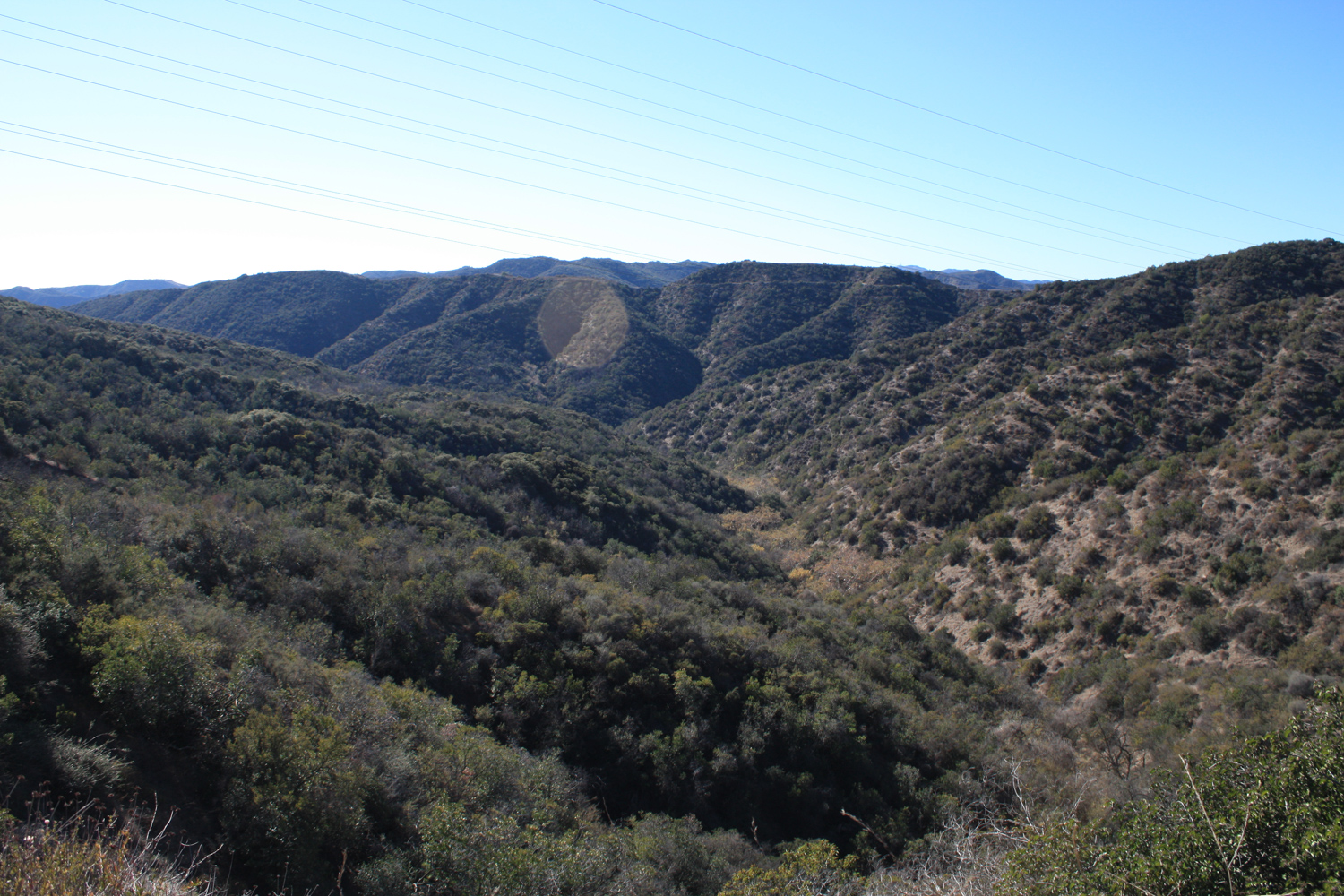 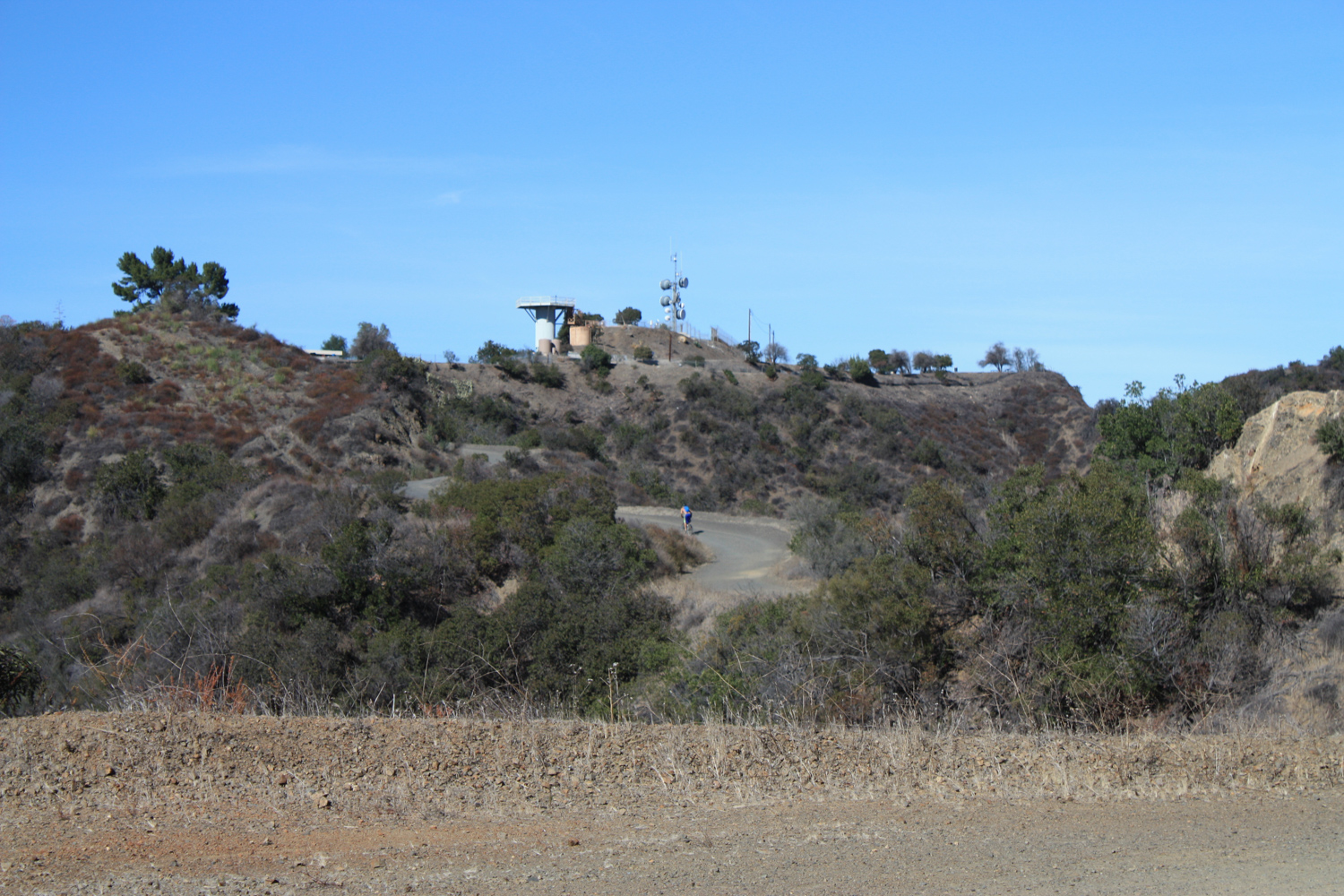 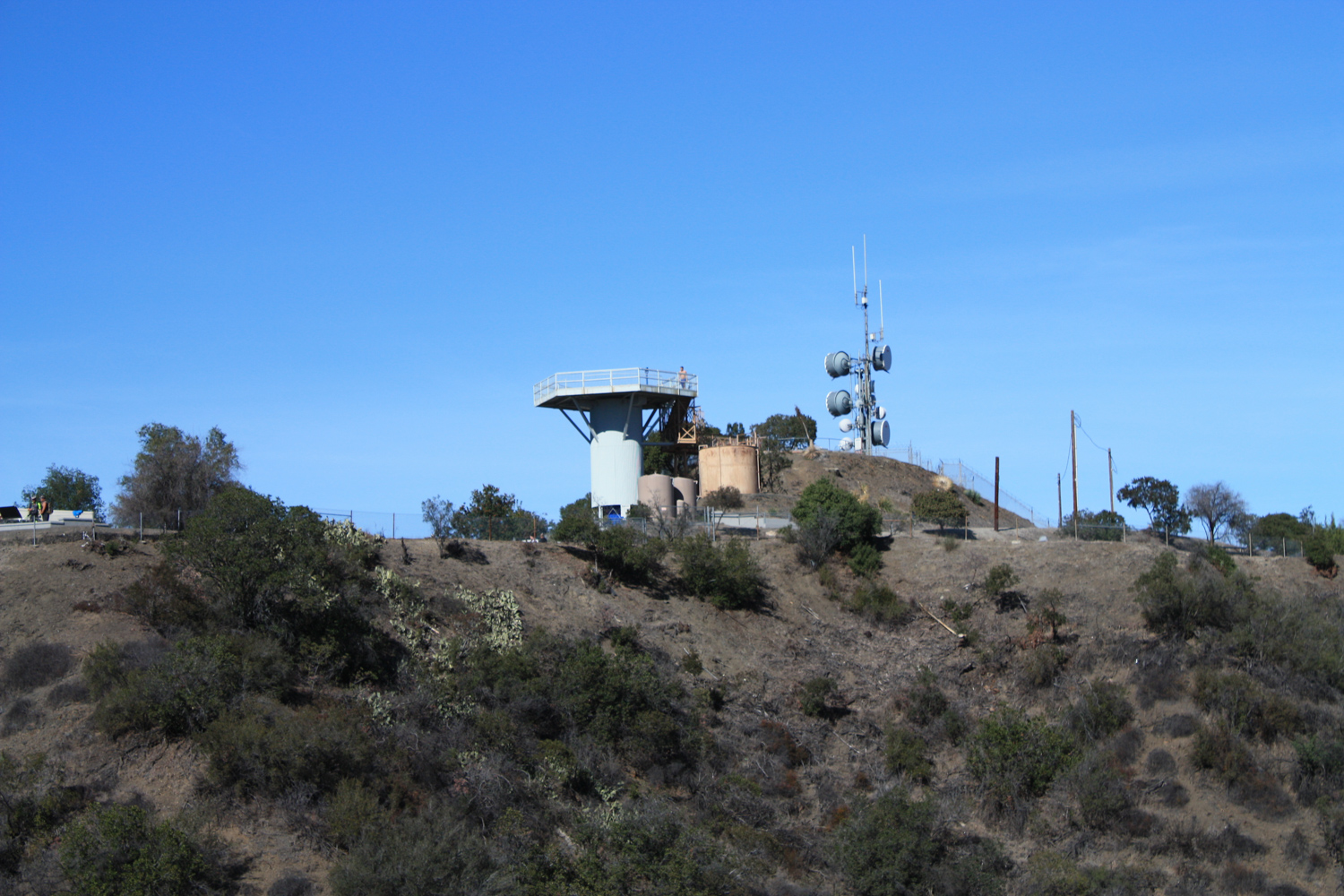 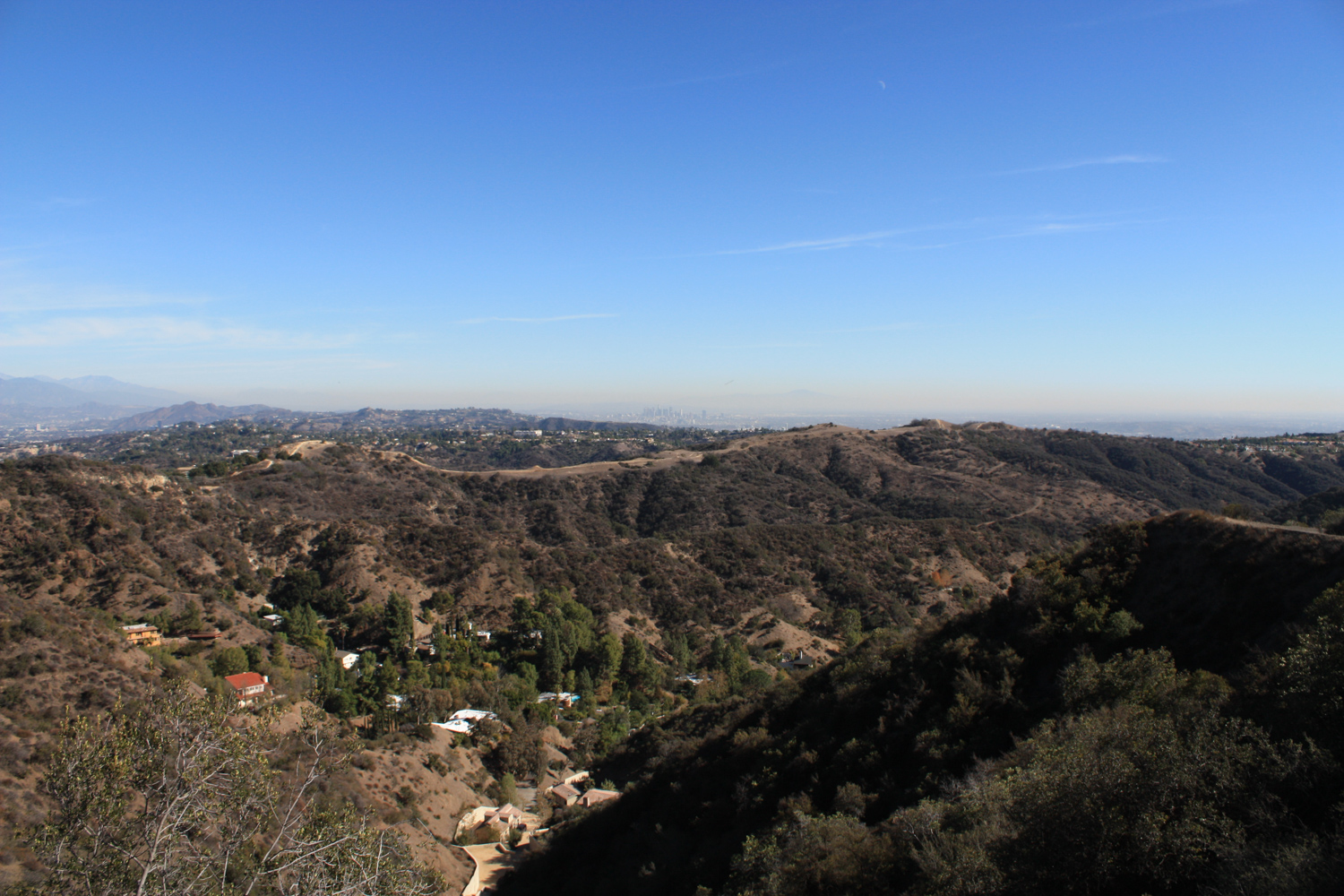 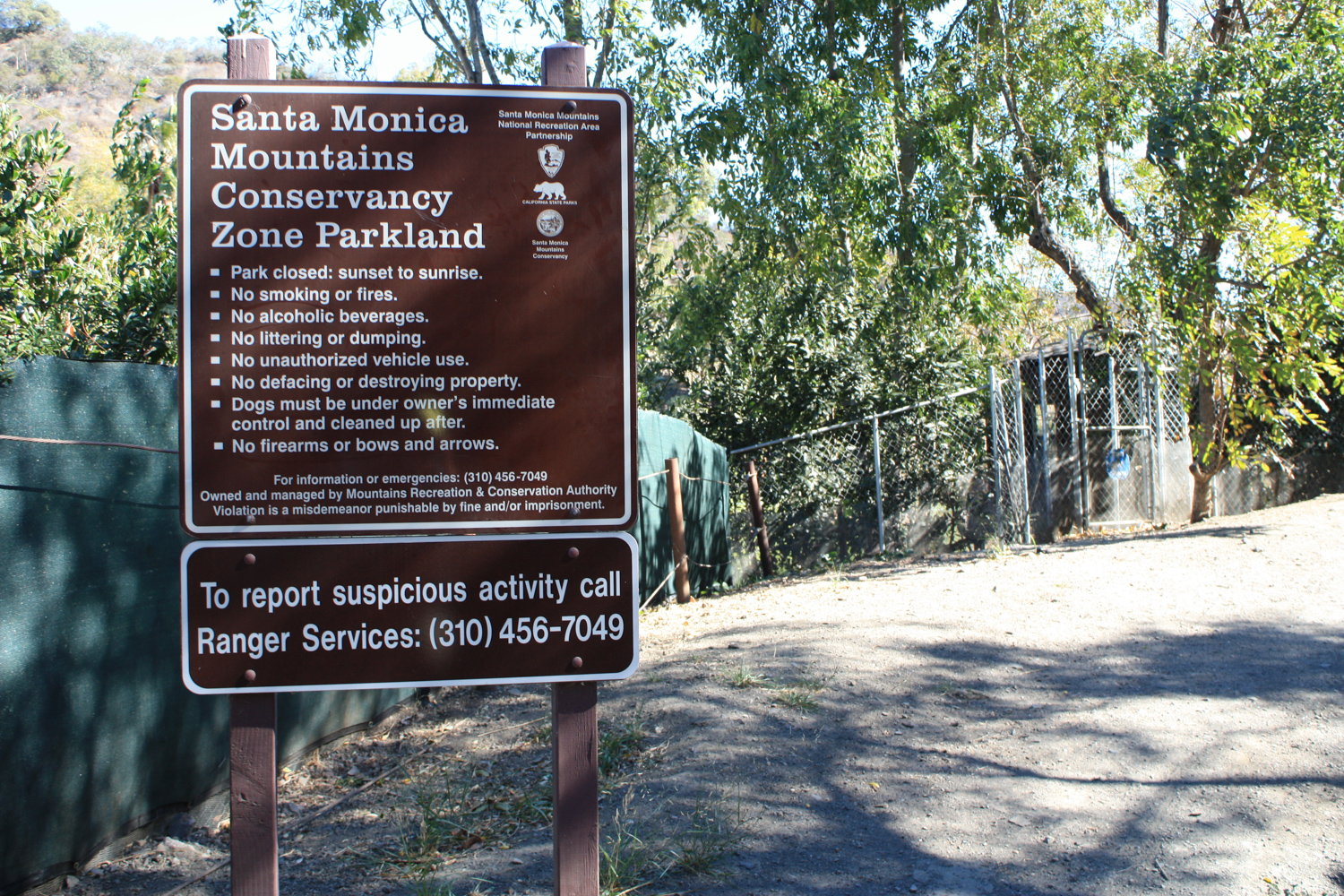 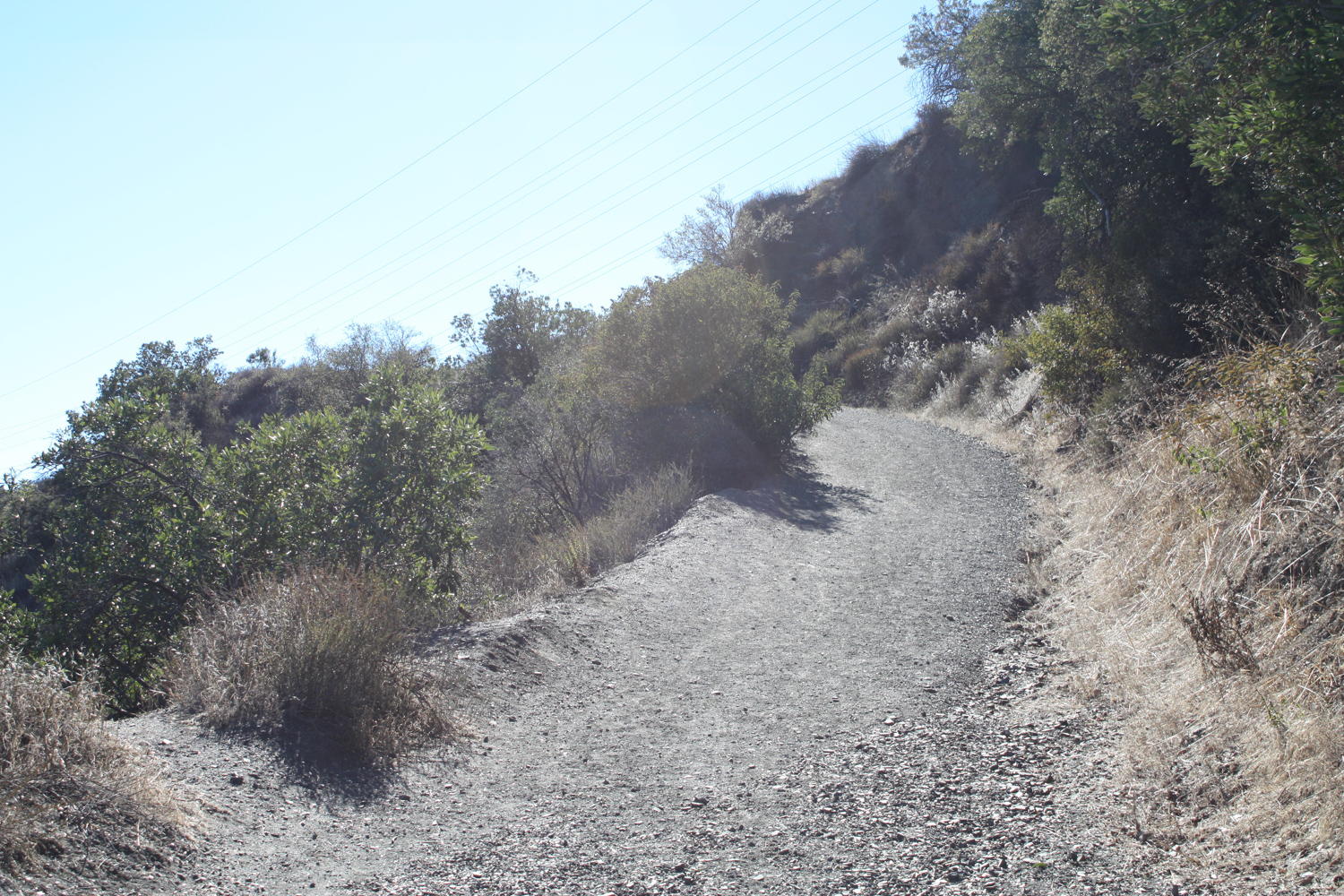 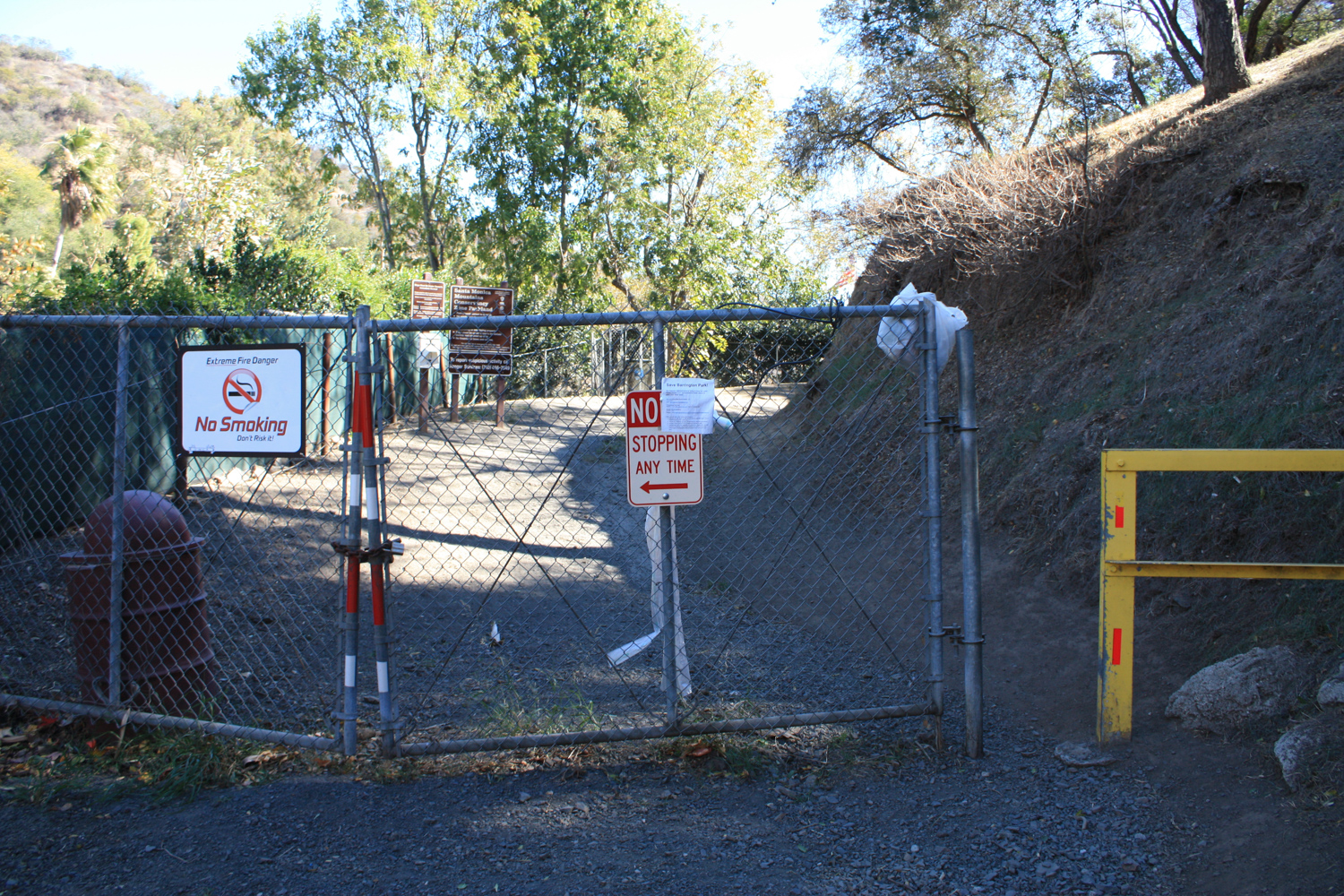 Very good. Most of the trail is on well-established, broad fire roads.

Trailhead as written is near the northern terminus of Mandeville Canyon Road near the intersection with Garden Land Road. An alternate trailhead (which would make this hike go in reverse) is at Mandeville and Hollyhock, slightly to the south. Parking is extremely limited here, so come early and avoid weekends. Be mindful of the residents who live here, too!