The trail to Keane Wonder Mine was closed in 2008 for badly needed repairs and reinforcement of the ruins, which the Park Service touts as one of the best examples of a gold mine in any National Park. The trail was re-opened in late 2017 and although it’s not long, it’s surprisingly strenuous. Much of the route is on steep scree and gravel slopes or straight-shots up ridgelines — it wastes no time in gaining elevation and provides precious few breaks along the way. In addition, you’re beginning near the Valley floor and climbing up into the dark Funeral Mountains, so you can expect hot temperatures and constant direct sunlight. Long story short — this hike is tougher than it looks on paper.

But hikers who venture out to the Keane Wonder Mine’s ruins (with all the extra water, shade, sunscreen, and salty snacks they should bring along) will be following in the footsteps of Death Valley history that sound so rich it could almost be pulled straight out of a classic Western movie. 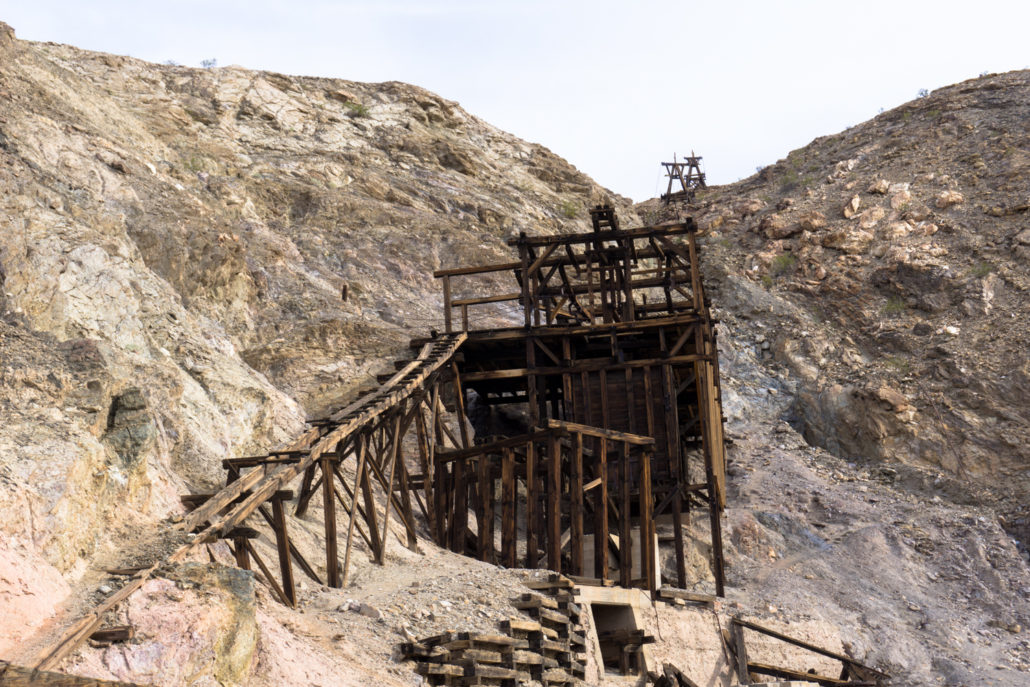 Mining was — in general — not a profitable venture in Death Valley. The harsh climate and topography made it difficult and costly to move goods out of the Valley, and few people were willing to live and work in what is the consistently hottest place on the planet.

There were, however, a few metal mines that did make money. In the early 1900s, there was a bit of a gold boom and rush in the area, sparking the founding and growth of places like Rhyolite and Skidoo. Here, in an area called the Chloride Cliffs, Jack Keane and Domingo Etcharren thought they had found a suitable site for a silver mine, but instead noticed the presence of quartz — which is a sign to miners that gold is usually nearby. Keane discovered a gold vein, humbly named it “Keane’s Wonder,” and sparked a minor gold rush.

Keane and Etcharren sold an option on the mine to an investor from New York, but the discovery of a larger gold deposit to the north soured the deal. The investor left and the duo went through a few other investors before the investors John Campbell and Homer Wilson took over in 1906. Etcharren used the money from the sale to open a store in Darwin, just west of Death Valley. Keane returned to his native Ireland, where he spent 17 years in prison for a murder.

Back in Death Valley, the investors put a ton of capital into the operation and actually made it profitable — even through the Panic of 1907 and the short depression that followed. The miners worked at night to avoid the oppressive heat, a processing plant was built in the Valley, and railroad spurs connected the base of the mine to the Tonopah and Tidewater Railway, which traveled through Beatty, Nevada north to Goldfield and south to the Union Pacific and Santa Fe Railways. But the biggest innovation here — and perhaps the biggest attraction for modern day visitors — is the unique aerial tramway that carried ore down 1000 vertical feet in less than a mile. 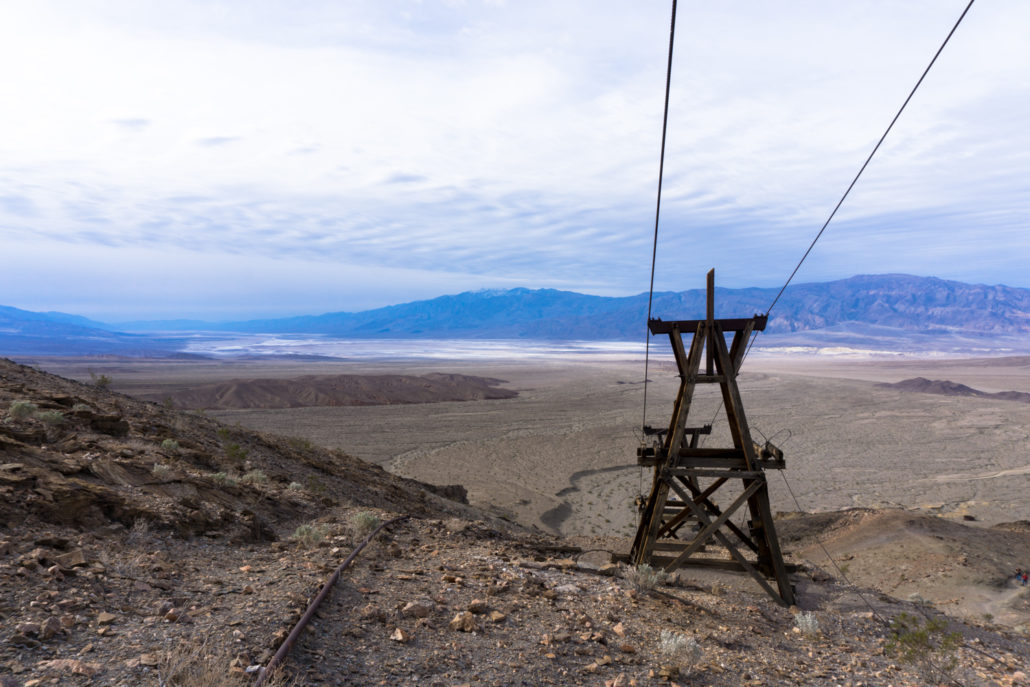 Historians estimate over $1 million worth of gold was hauled down these cables, many of which still stand in the blistering desert sun.

Your hike begins at the end of a 2.8 mile dirt road that’s rough but passable for most passenger cars unless there’s been some weather in the region. It’s a quick 200 feet or so from the trailhead to the first signs of the old mine. 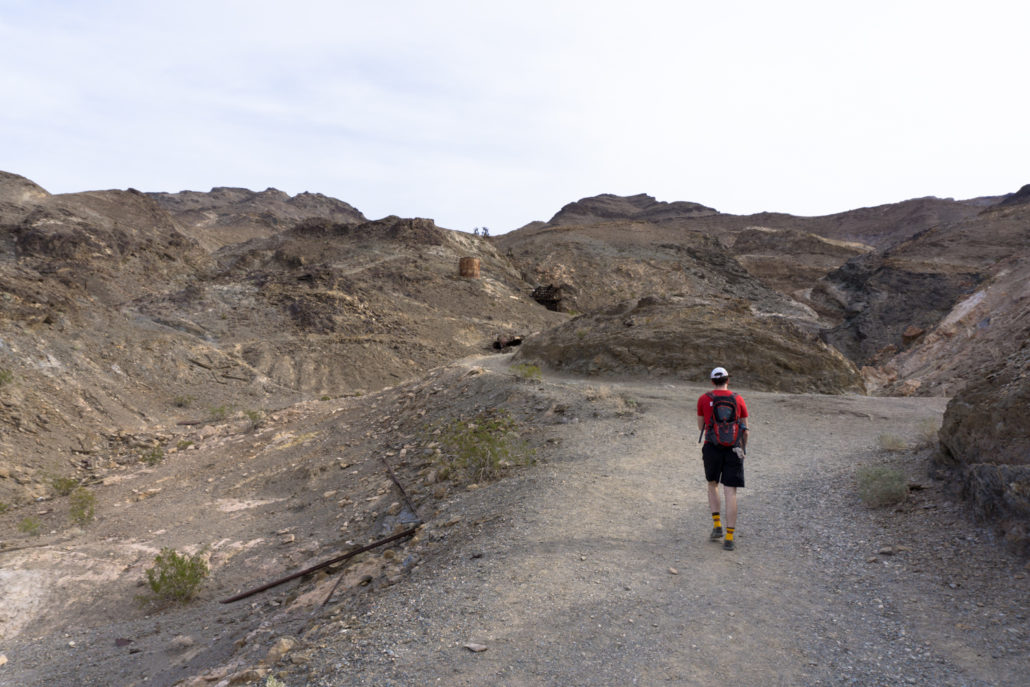 Along the way to the base of the tramway, you’ll notice lots and lots of mining debris in the washes nearby — and basically everywhere. You may be tempted to go a-wanderin,’ looking for old relics and pieces of the past.

I and the Park Service strongly encourage you not to do that, and to stick to the established trail at all times.

This region was closed in 2008 partially to restore dangerously unstable architecture, but also because the region is littered with mine shafts — some of which are vertical and some of which may not even be mapped. In 1984 a man died in this region after tumbling into a vertical shaft. Since the closure, 50 mine entrances have been sealed or covered, but there may be more.

In addition, the debris from mining operations is not exactly what we would call “environmentally responsible” today. Poisonous substances like lead, mercury, and cyanide are used in the operation of gold mines, and most of the miners here just tossed the leftovers in nearby ditches. The Park Service did do some cleanup and testing on the trails and it’s safe to hike, but if you wander off trail you might get into something your body would rather you didn’t.

The bottom of the tramway is just around the bend, where an interpretive plaque will give you a bit of the history of the Keane Wonder Mine (as well as more warnings about staying on the trail and not climbing on structures).

From here, the hike begins. 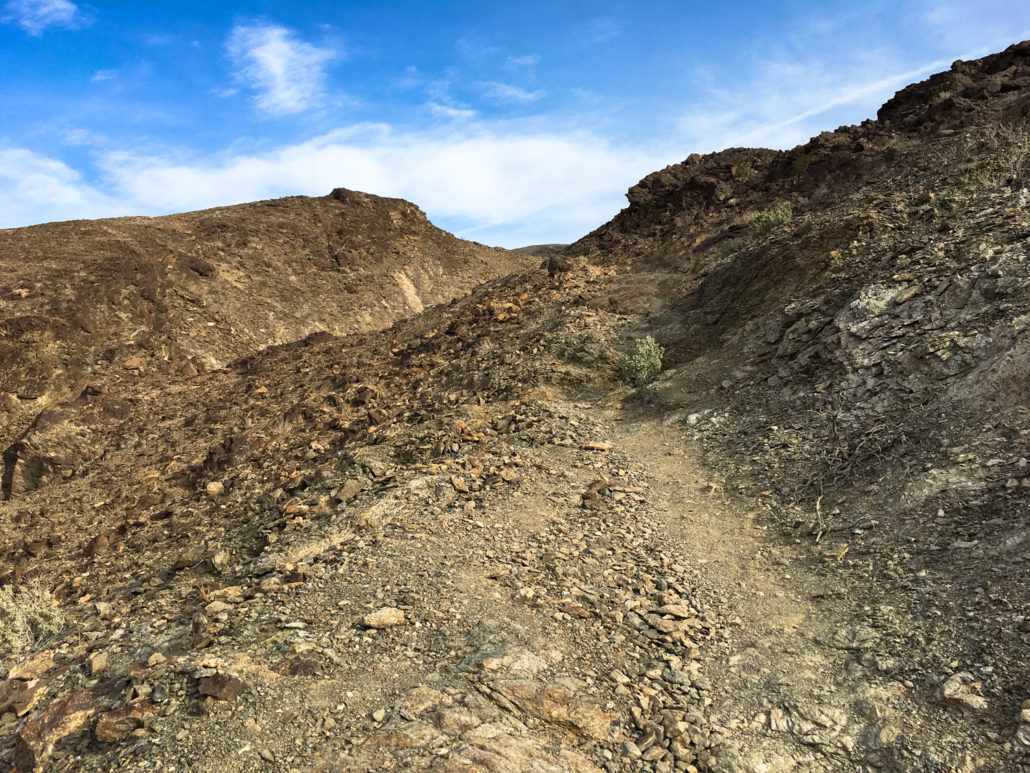 It’s pretty much a straight-shot uphill with precious few breaks from the incline until you reach the mine site itself … so stretch out those legs before you get going (and maybe pack a pair of trekking poles for the trip back down).

Along the way, though, you’ll have some pretty impressive and sweeping views of Death Valley below you — as well as a sense that you’re gaining a lot of elevation in not a lot of time. 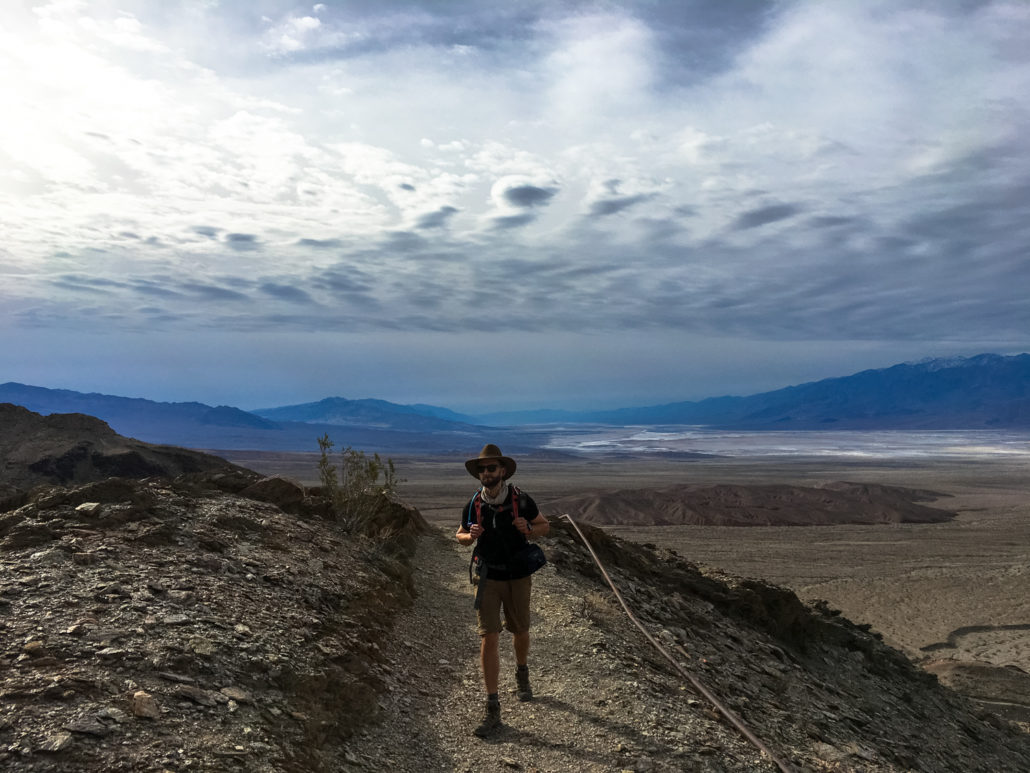 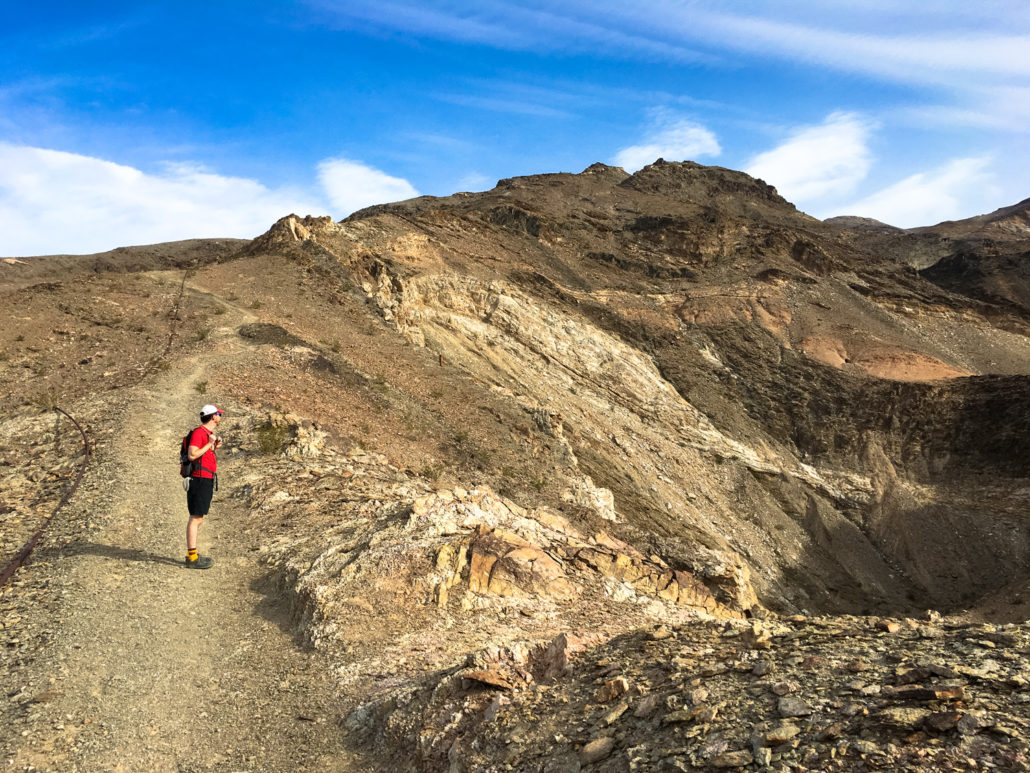 For much of the hike, you’ll be following the rusted remains of an old water pipe that supplied the mining camp above you. You’ll also have a fantastic vantage point on the mile-long aerial tramway as well as the seemingly endless number of mines that were dug into the hills and valleys all around you. Keep your eyes peeled and you’ll see the tiny entrances carved into the most improbable places.

Some, you can get very up close and personal with: 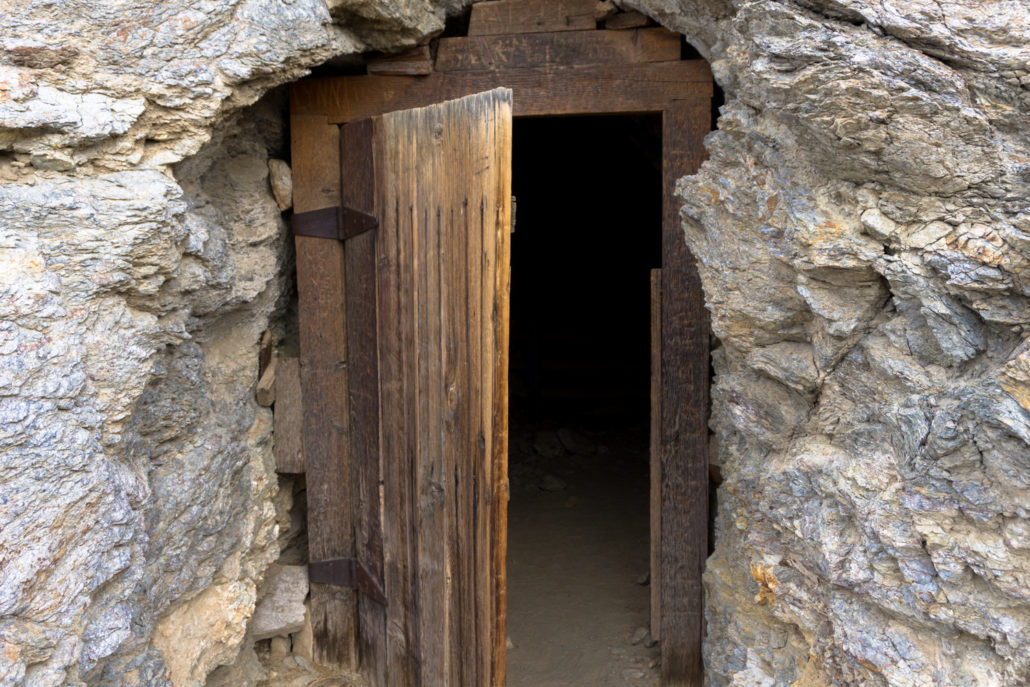 At about 1.3 miles, you’ll pass the remains of an old stamp mill and enter the Wonder Keane Mine grounds themselves.

You can turn around here, enjoying a spectacular view of the valley below you, or you can continue onward for as long as you like, poking around the rest of the mine remains. 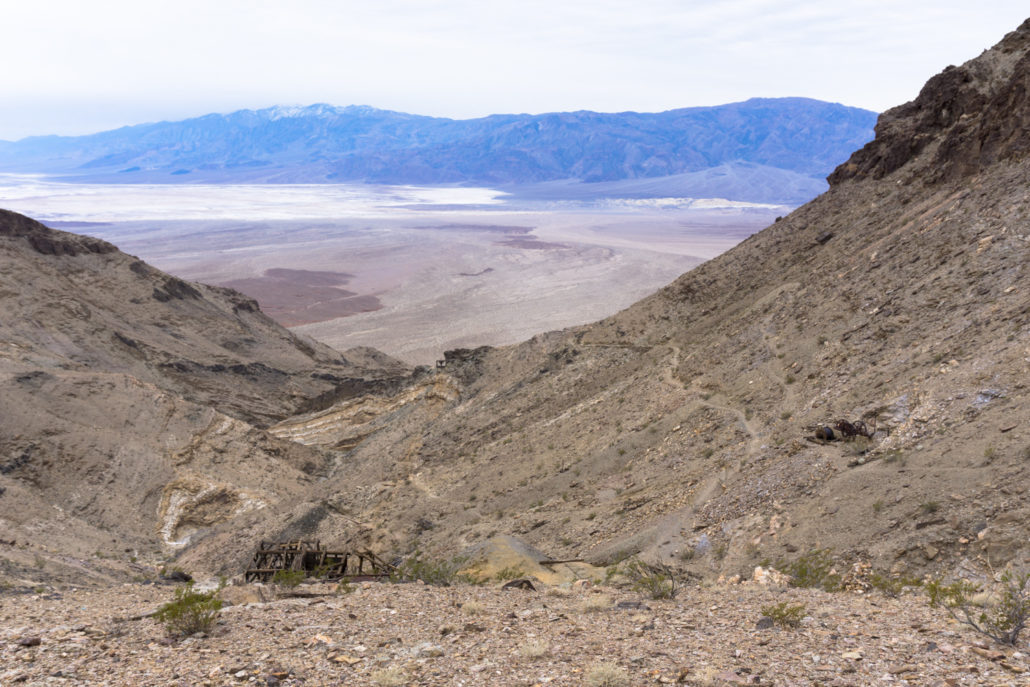 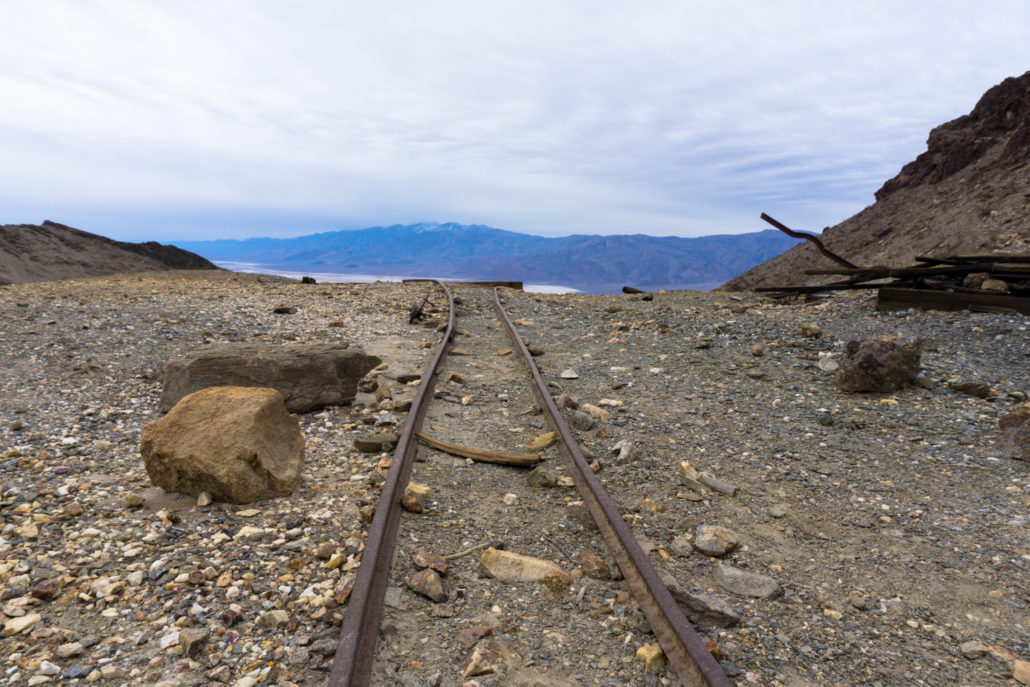 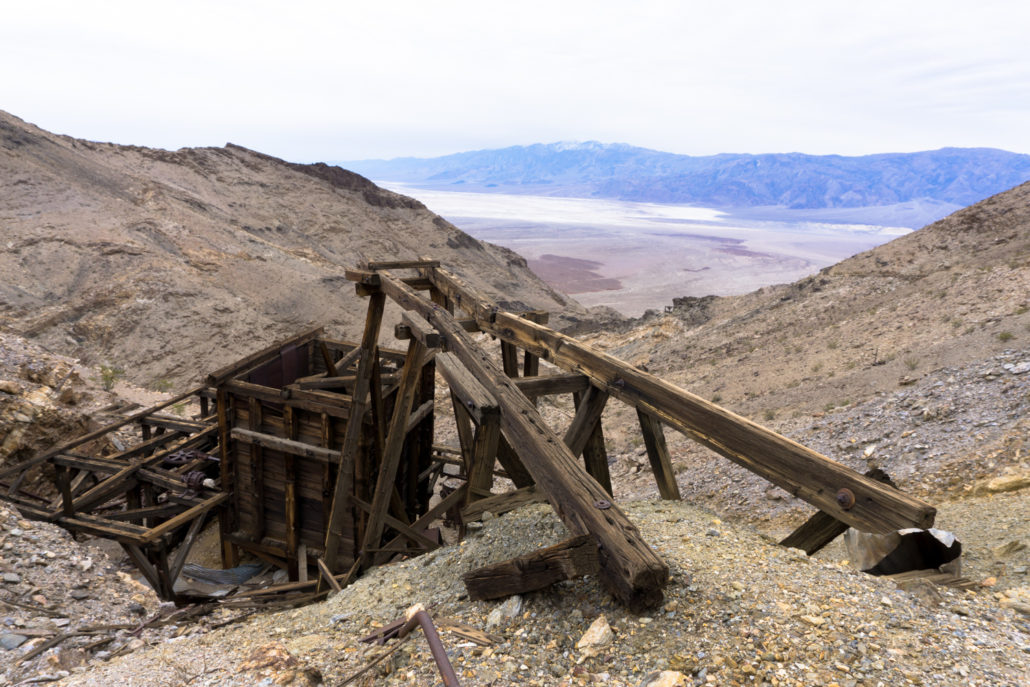 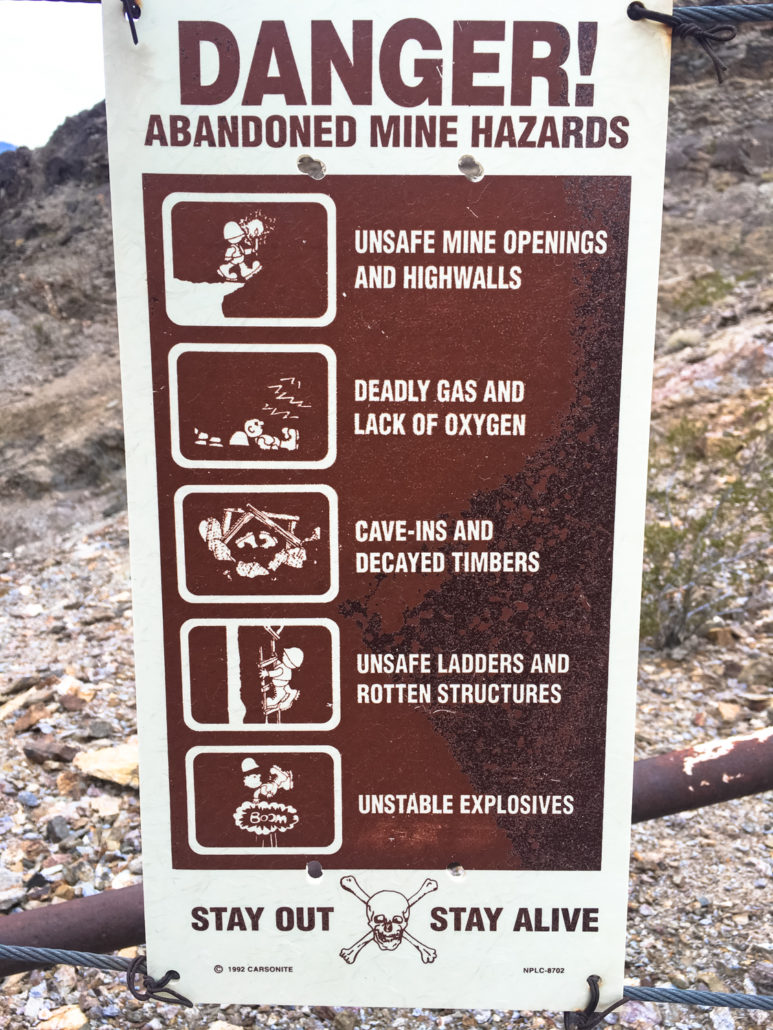 When you are done, return back the way you came.

Accommodations near Keane Wonder Mine 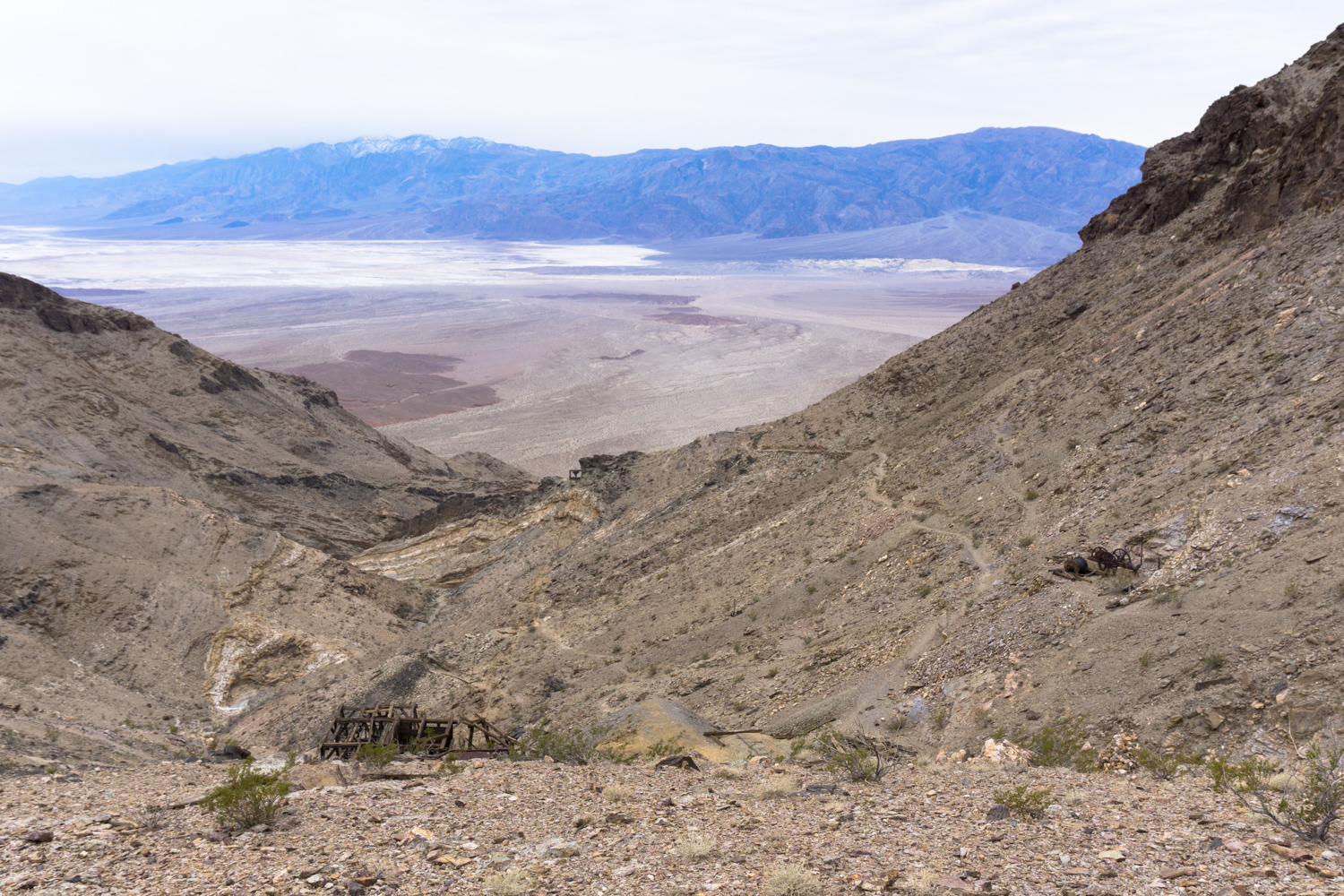 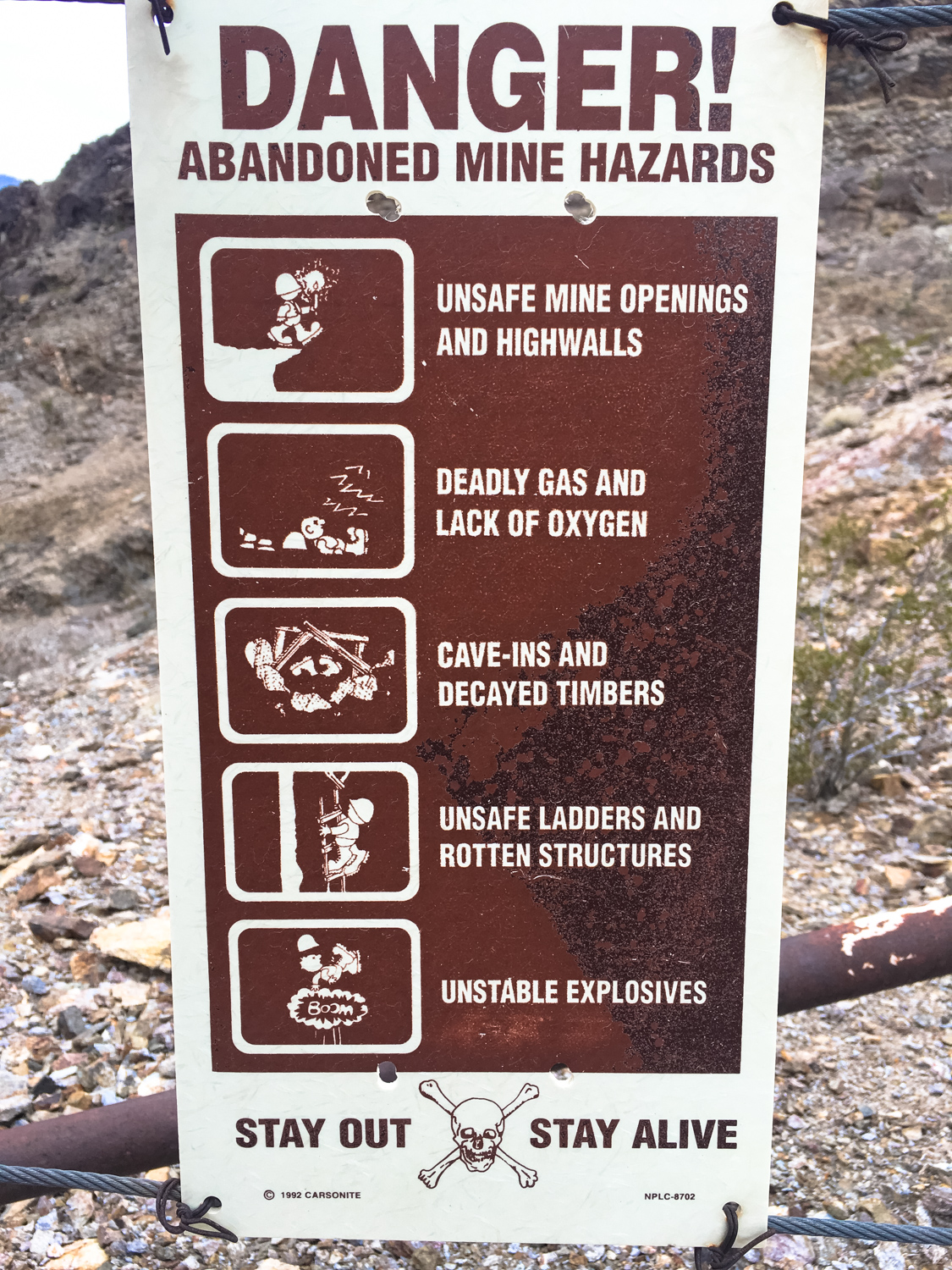 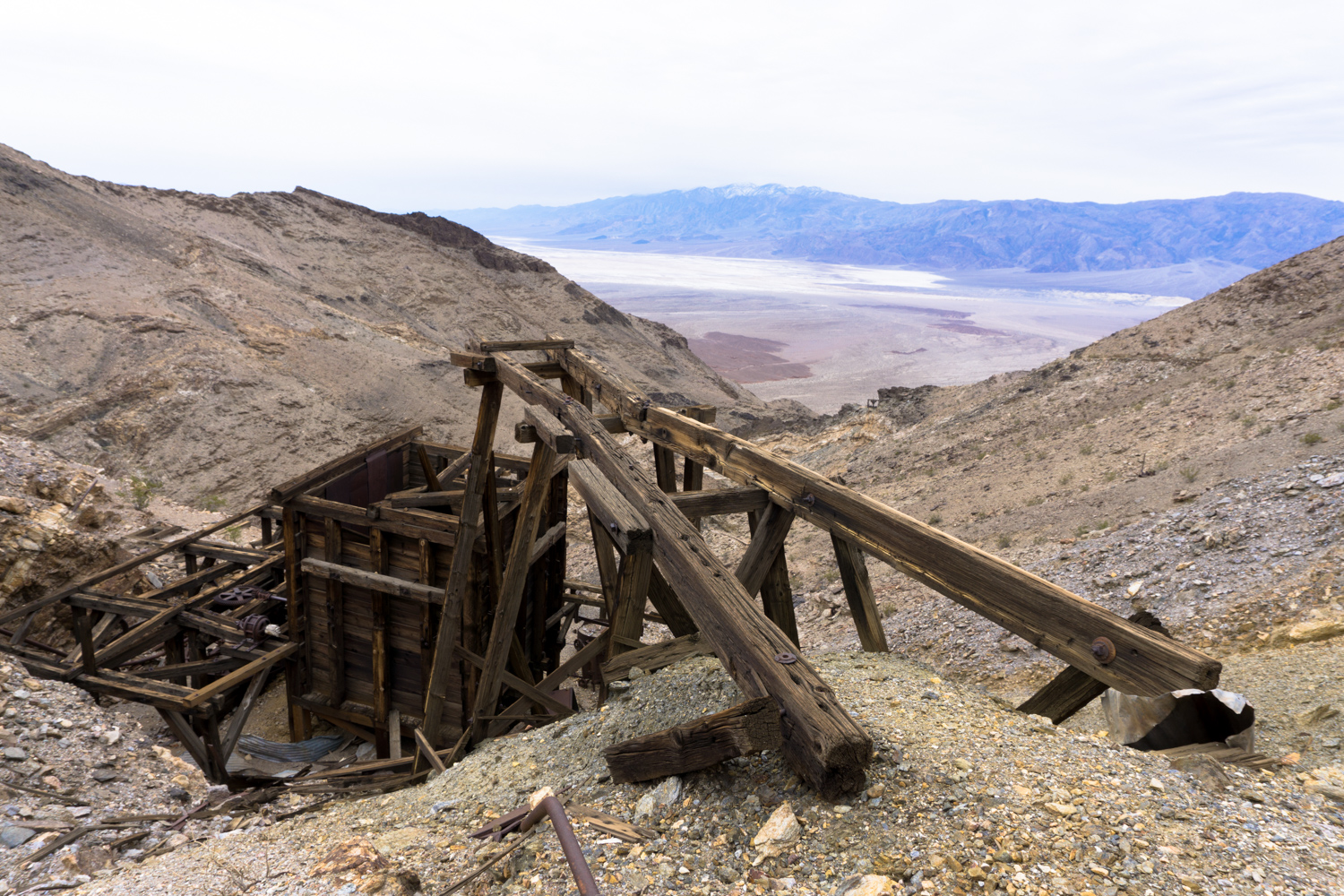 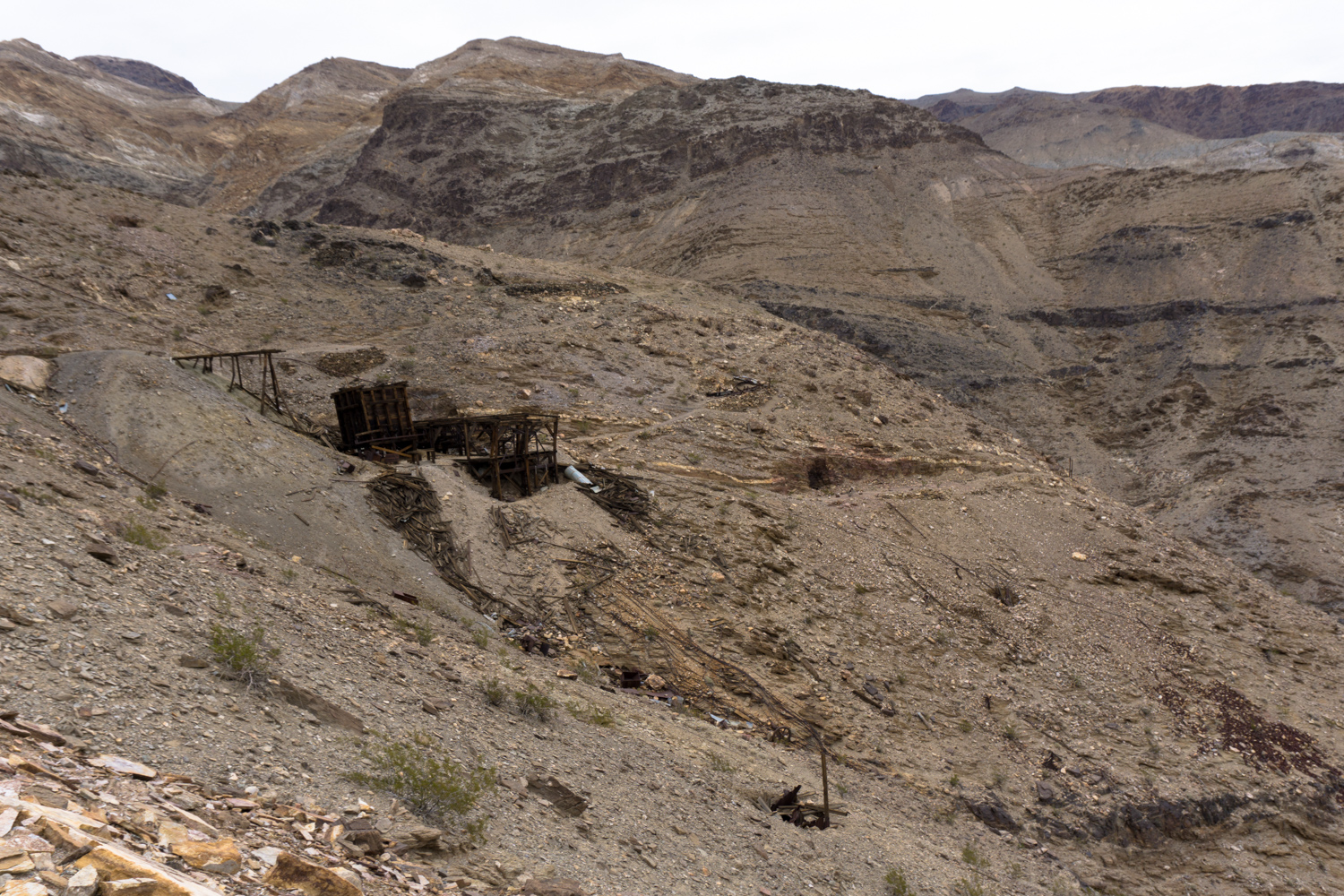 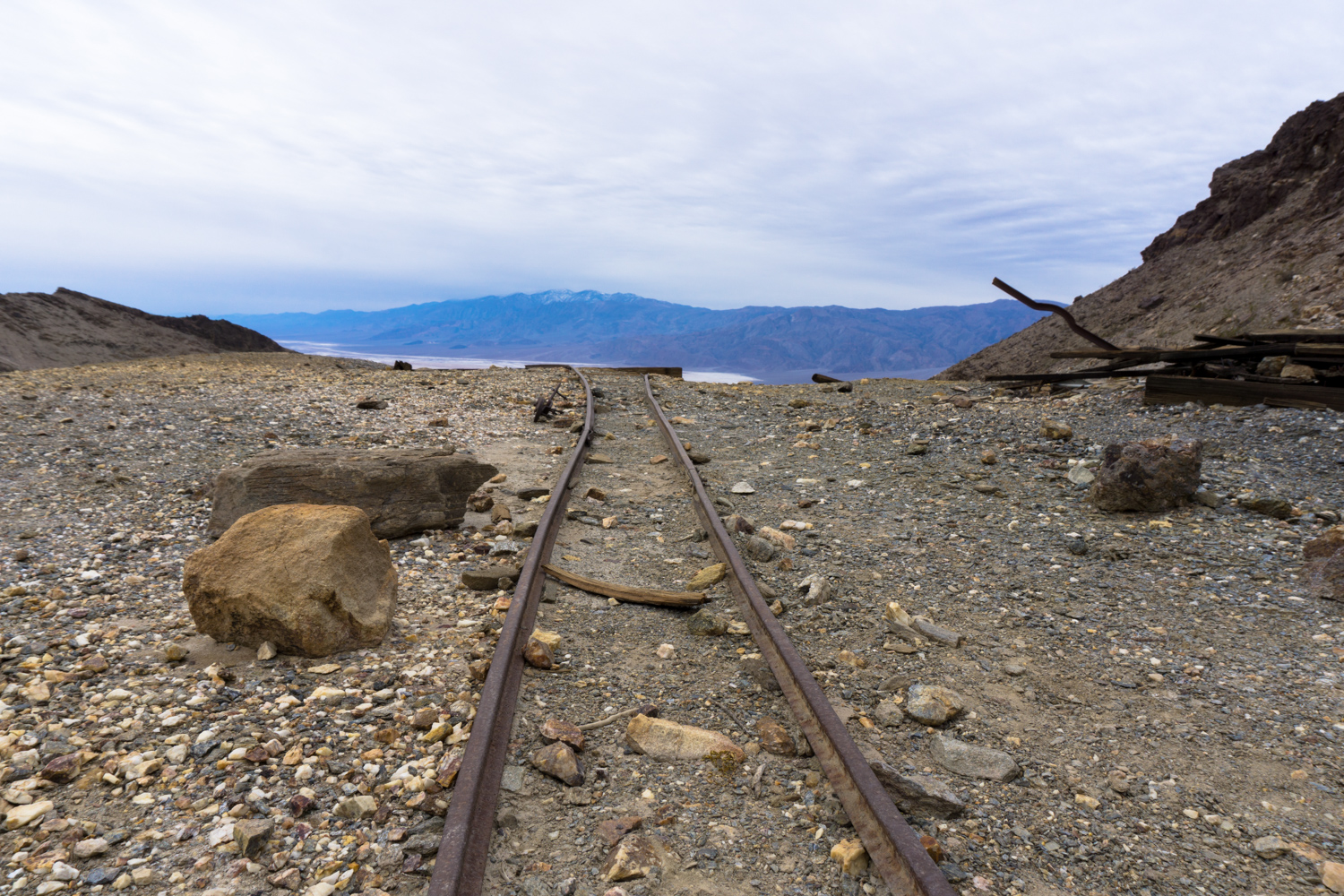 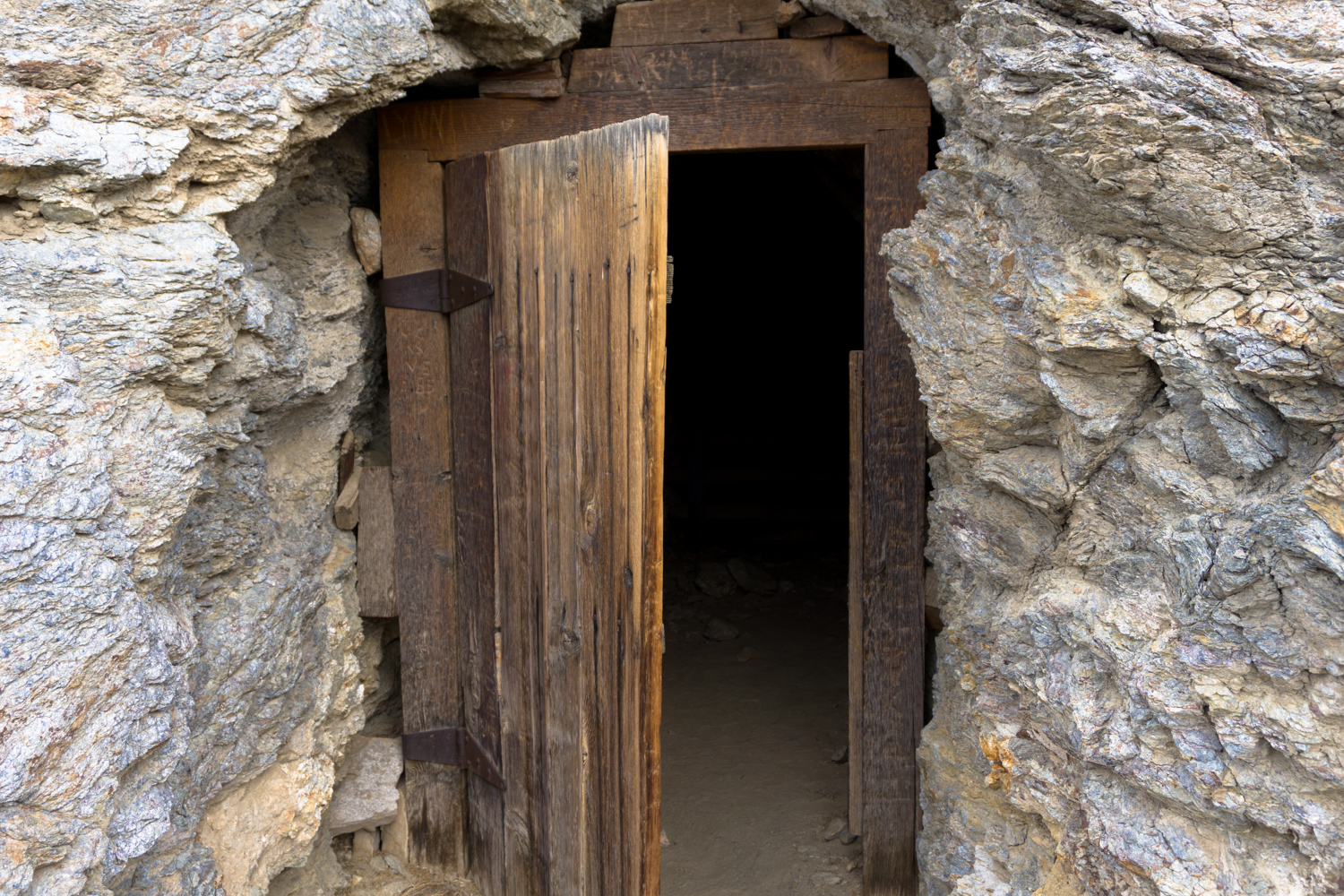 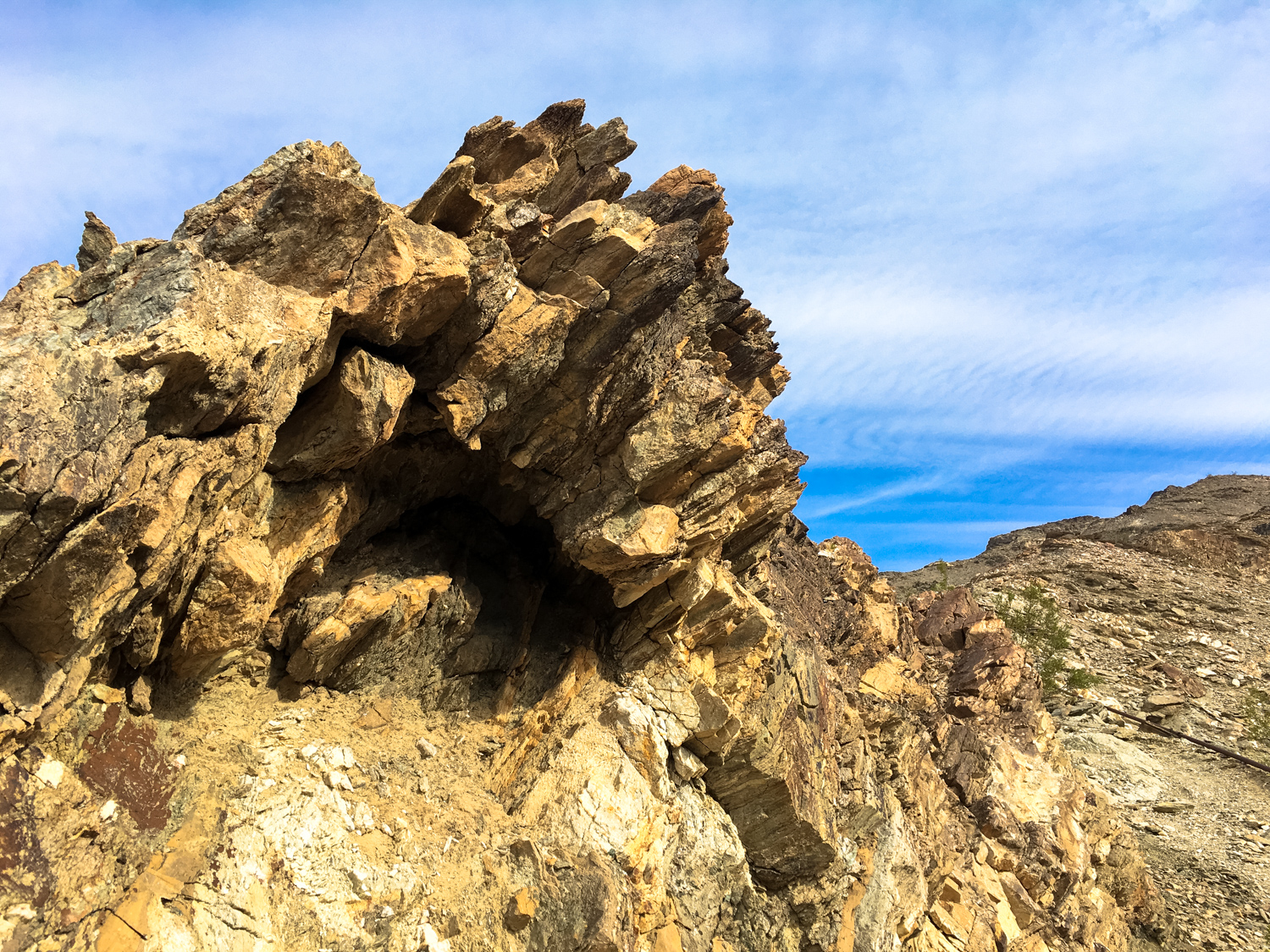 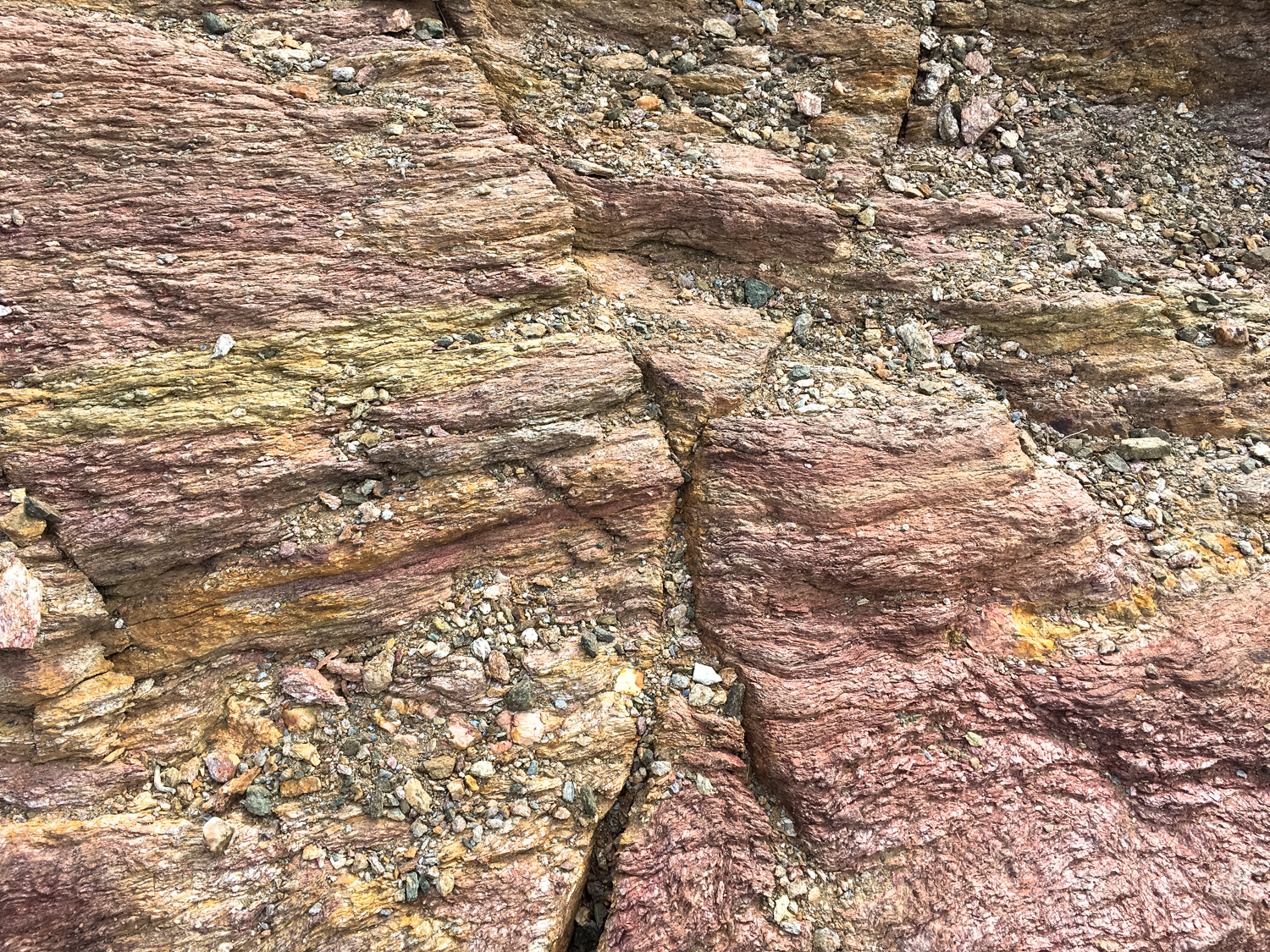 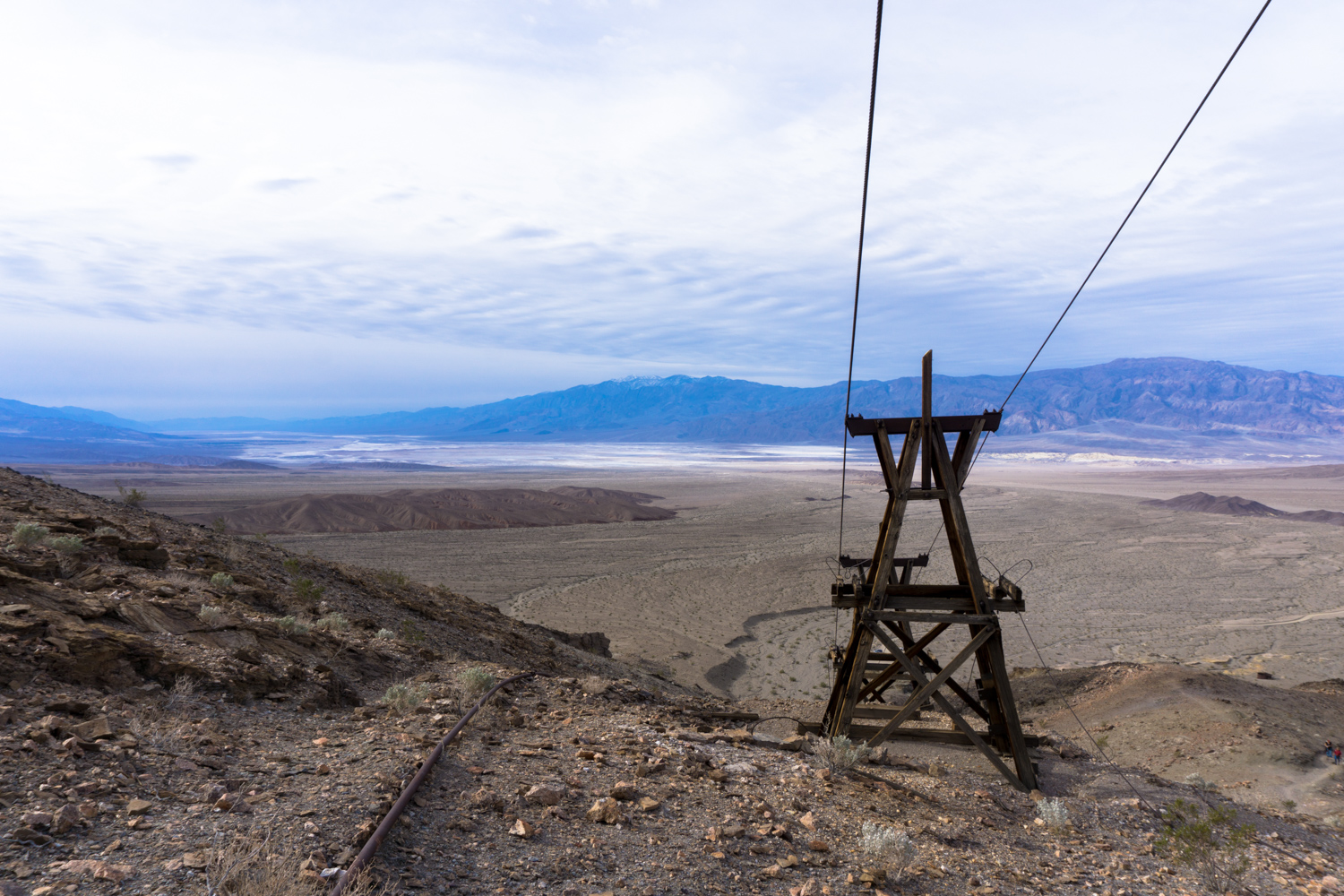 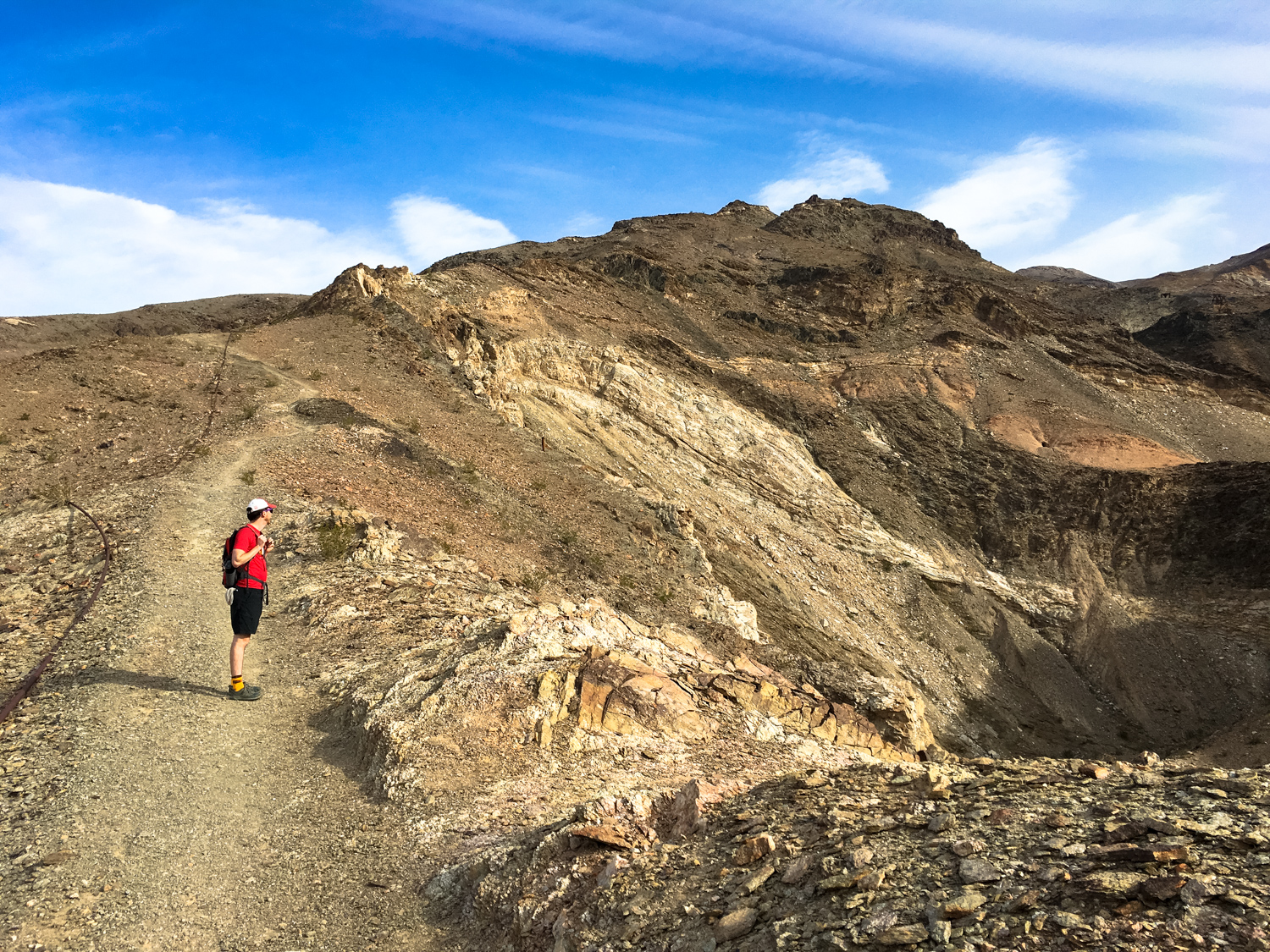 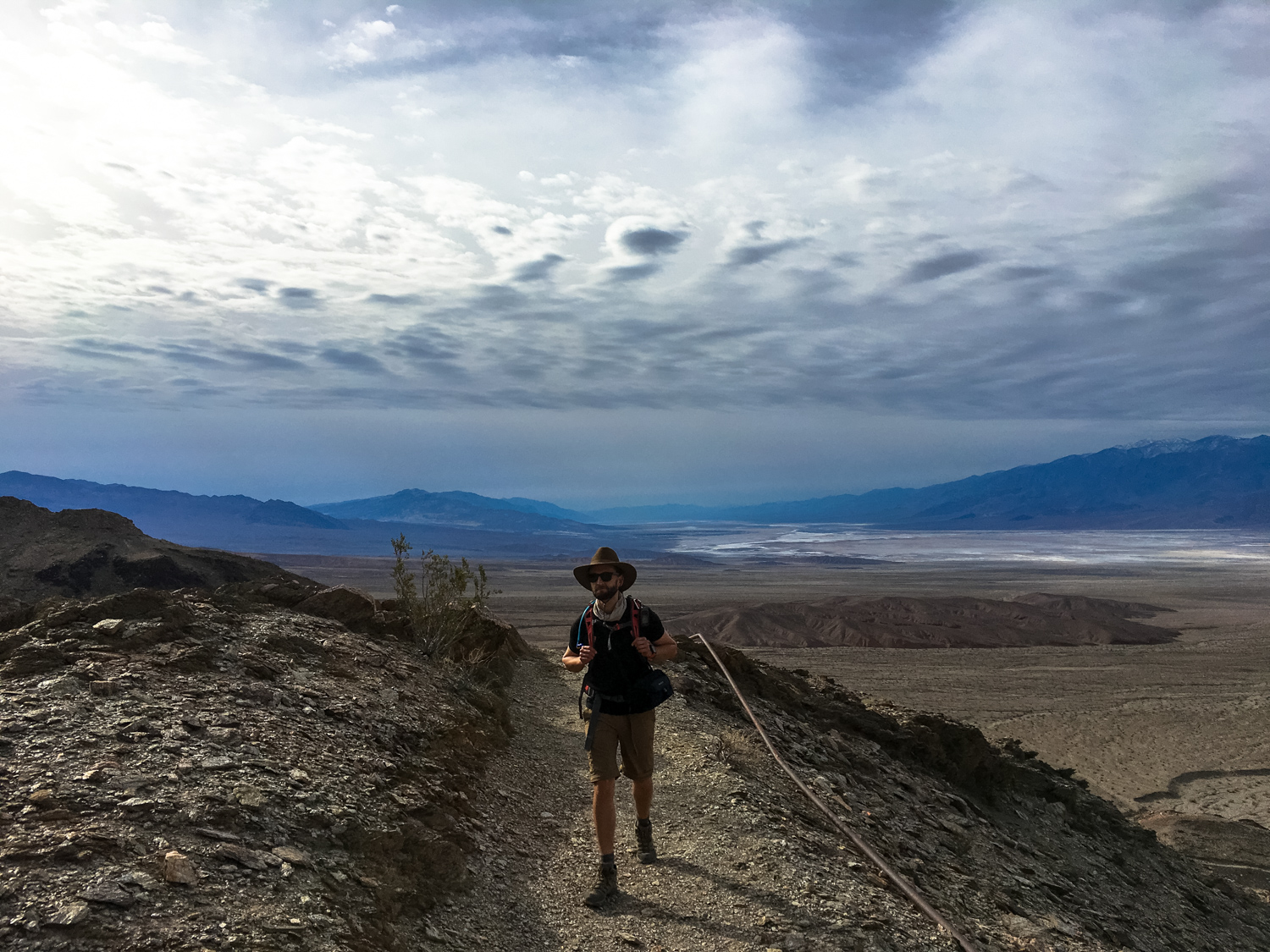 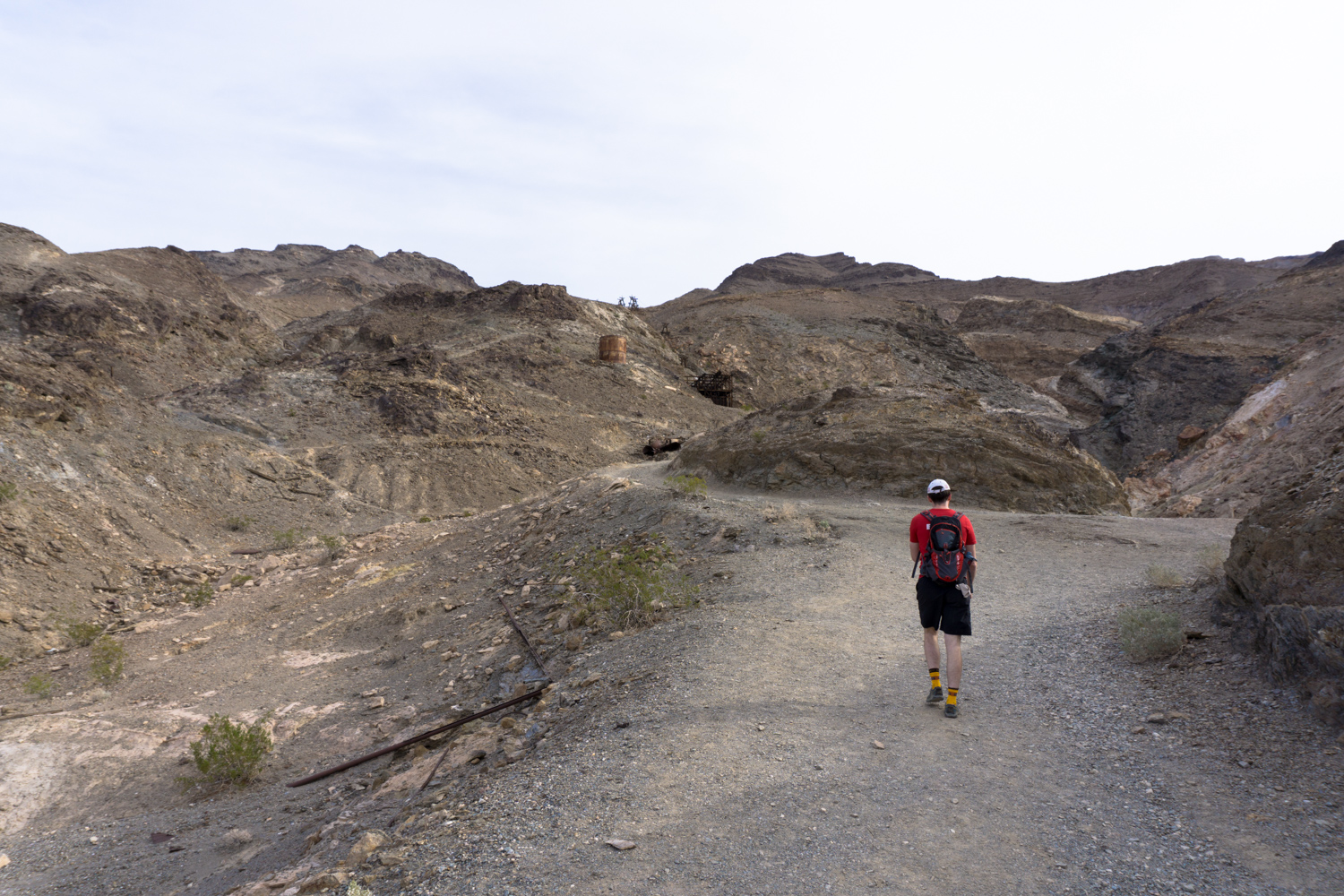 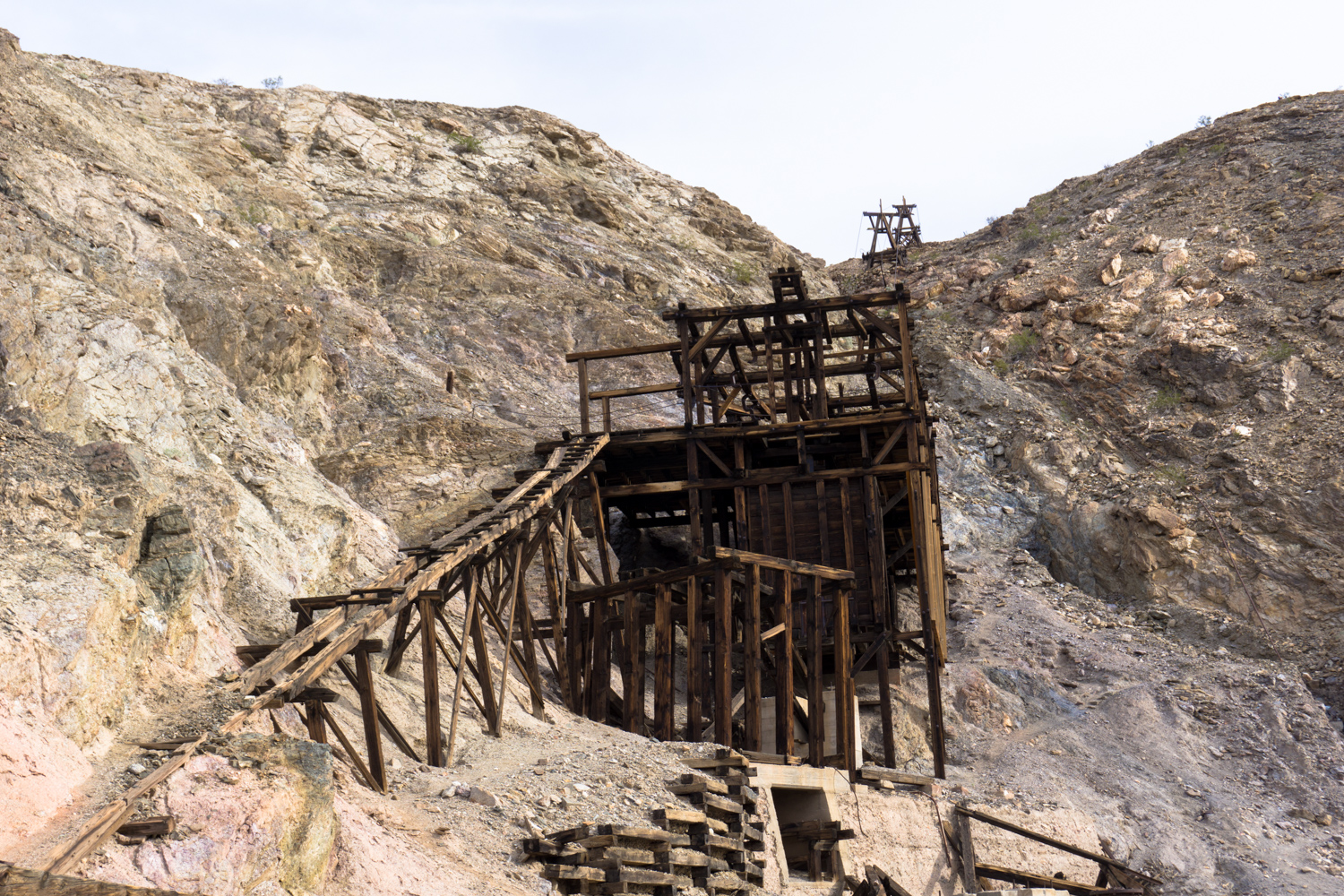 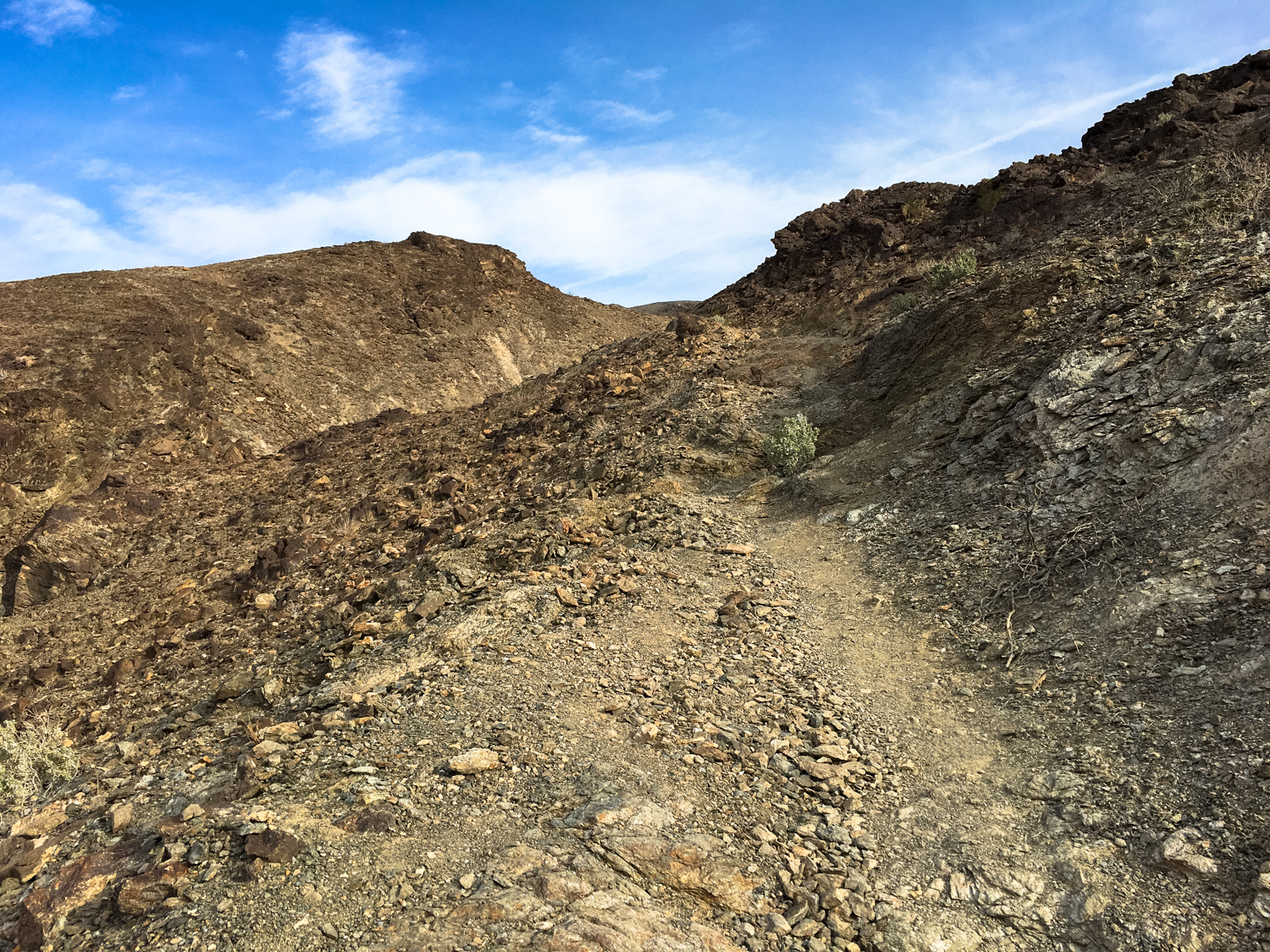 Portions of this trail were renovated in early 2018, but much of the route remains rough but do-able. Large sections of the route are basically just straight-shots up slickrock or scree slopes to old miner's trails. There is no shade on this route and the steep incline makes this challenging, despite its short length.

There is no camping allowed anywhere near the trailhead or ruins. Closest available camping is at Stovepipe Wells or Furnace Creek.

From Furnace Creek, head north on 190-W toward Stovepipe Wells. In 10.6 miles, turn right onto Beatty Road. Continue for 5.7 miles, then turn right onto a gated dirt road. This road travels 3.9 miles to the trailhead at the base of the Keane Wonder Mill. The road is passable by passenger cars in most conditions, but always check with the rangers before you head out.