If you’re fascinated by the legacy and history of the Ancestral Puebloans and their cliff dwellings and Great Houses (and really, if you’re not what are you doing all the way out here in Chaco Canyon?!), there are definitely nicer looking or more ‘put together’ sites to check out than Hungo Pavi — but once you visit a few of them you’ll eventually learn that most of the better known and more visited sites have had extensive excavation and reconstruction work done on them … and not always to modern archeological standards.

So when you first look upon the ruins of the Hungo Pavi great house, they may seem a little underwhelming if you’ve already seen other sites — but Hungo Pavi today looks pretty much just as it did when the Navajo People moved into the area hundreds of years ago, or as it did when the U.S. Army first arrived here in 1849. 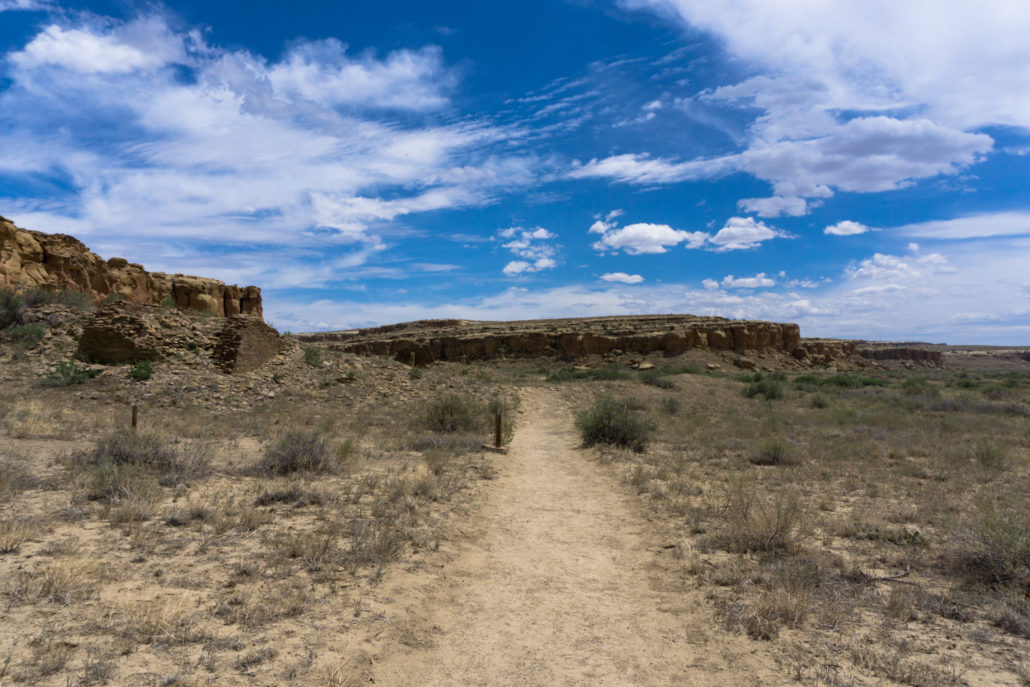 The beauty and wonder of Hungo Pavi lie in this more subtle setting — it’s not only easy to see how such a magnificent building could be easily missed in this landscape, but it’s equally inspiring to look out at the incongruous small hills all over this landscape and wonder if they, too, might be former Puebloan dwellings. 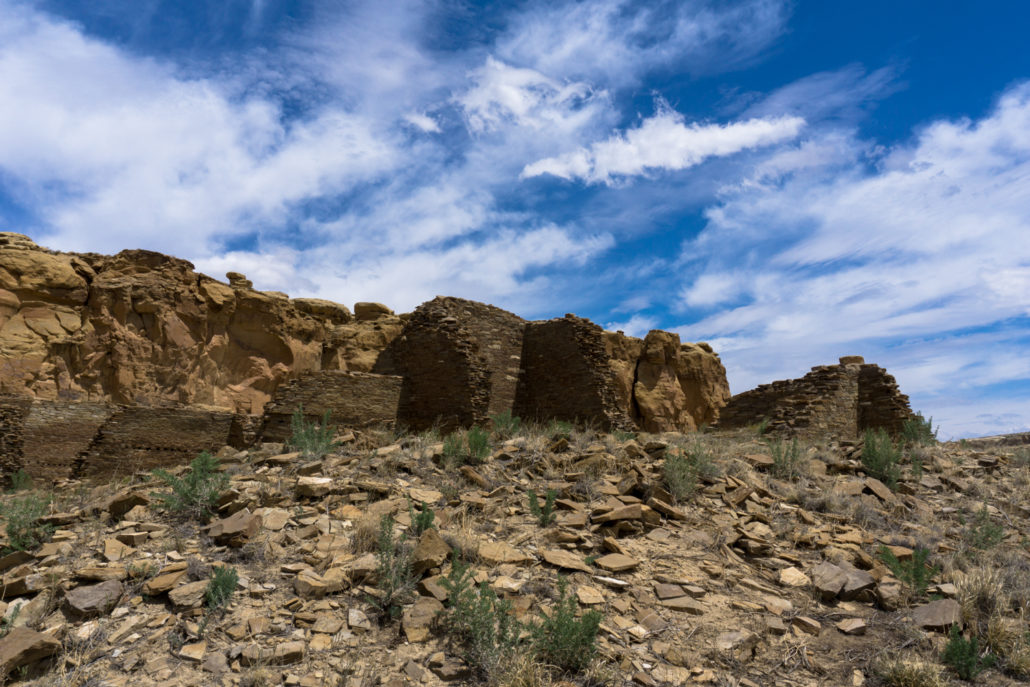 The short but easy to follow trail meanders around the exterior of the Hungo Pavi house — built in the distinctive “D” shape of the influential Chacoan style — and across an unexcavated kiva. You will come very close to the walls themselves, many parts of which are still standing hundreds of years after their original construction (in some places, with a few patches of modern masonry to help out). 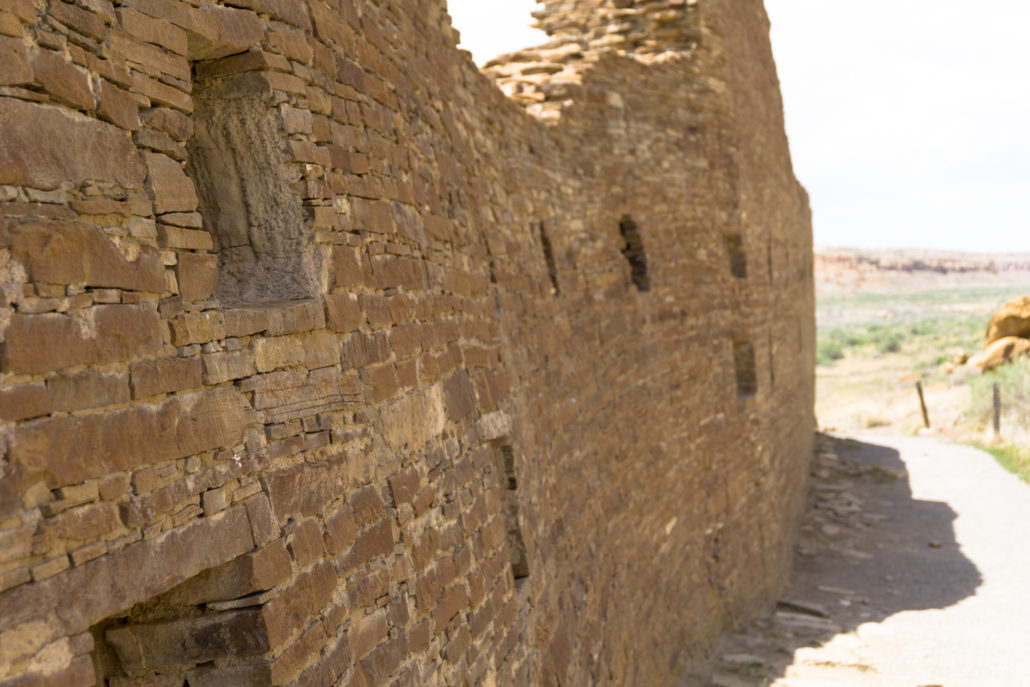 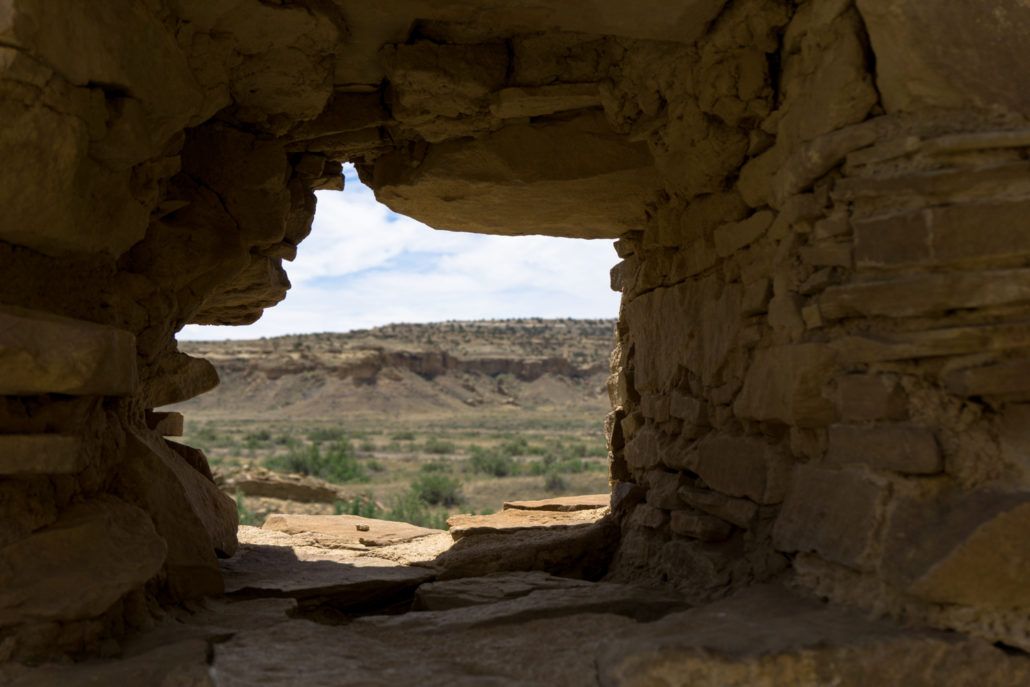 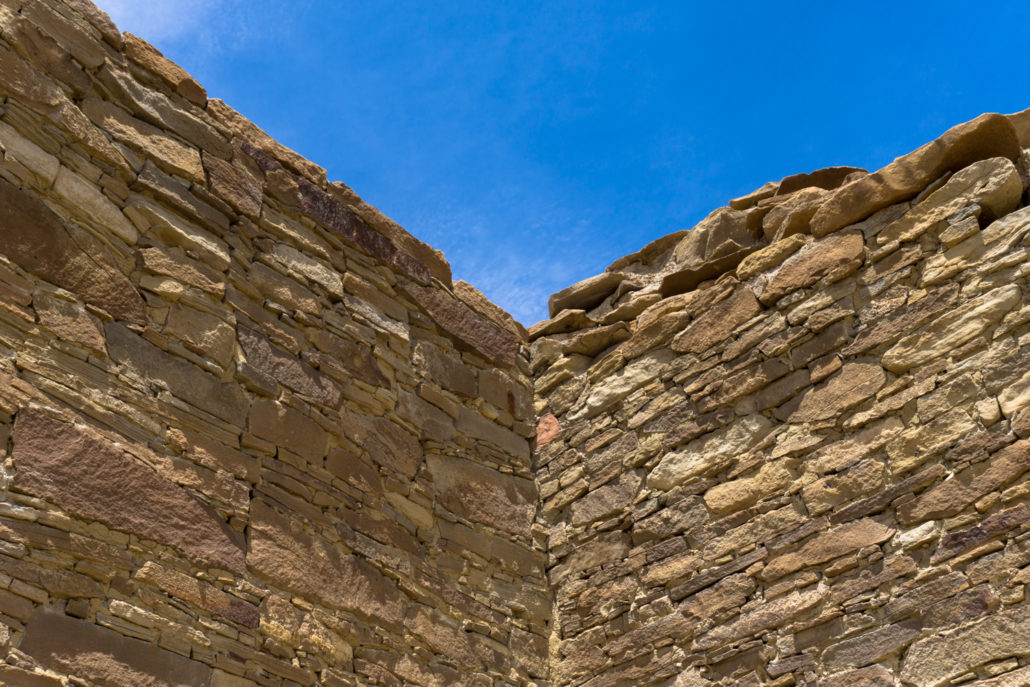 At the easternmost portion of this hike, if you look up at the nearby cliffs, you may be able to spot remnants of carved stairway system that connected with a network of roads that reached out to Puebloan sites all across the Four Corners region. You can spend some time actually hiking on remnants of those roads on the nearby loop hike to Pueblo Alto as well. 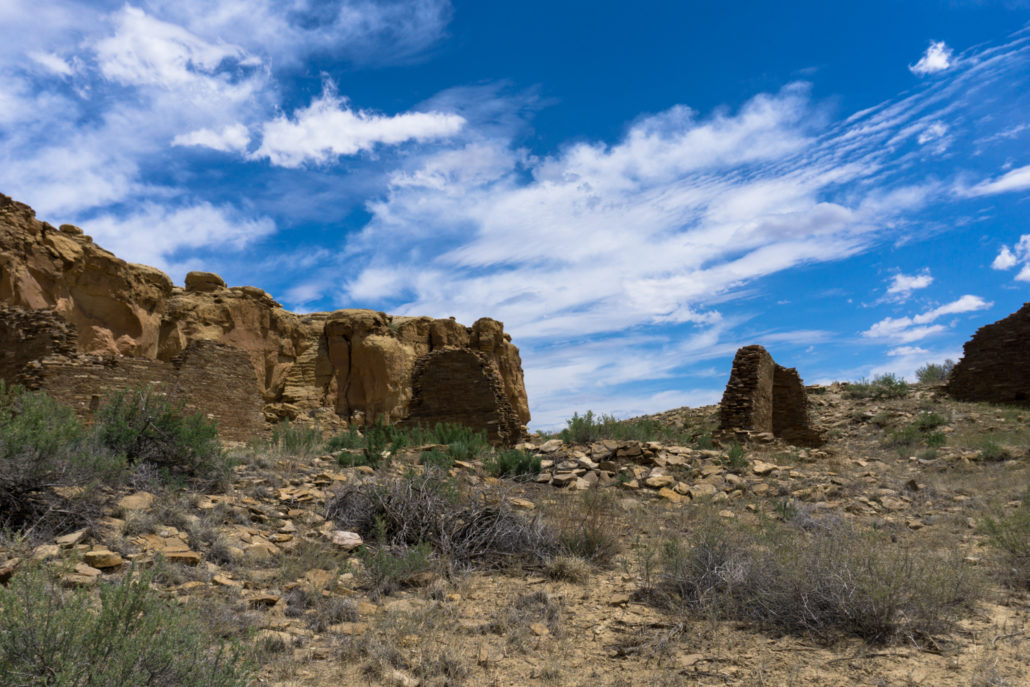 on the left hand side, look at the cliff wall between the two sections of wall — the ridged lines are remnants of the old stairway used by Chacoans.

Enjoy the site respectfully — and definitely visit the nearby trails at Pueblo Bonito and Pueblo Alto.

Depending on the time of year you visit and the direction you’re traveling from, the roads to Chaco Culture National Historical Park may be rough and bumpy or completely impassable. Generally, the road from the north (from US-550) seems to be the most reliable. Despite some fearful postings on travel forums, in good conditions that route is no more difficult than driving on washboard dirt roads. In poor conditions, though, it may be completely closed or impassable for low-clearance cars.

The Park Service has noted that automatic GPS directions in this region are pretty much useless, so they strongly recommend following their written directions and checking with the rangers before you head out to see if there are any updated conditions or hazards you should know about.

Chaco Canyon hosts extensive remains of the most important site to one of the largest and most complex societies in North America — one that researchers still don’t know that much about. In addition to being an important historical site, the region remains an important modern day cultural site for many of the tribes that descended from the Ancestral Puebloans or lived in the region after they left it. All items in the park are protected — do not take anything you find here and do not touch existing masonry as the oils from your hands may increase erosion or damage. Treat the landscape and the ruins with respect and reverence. 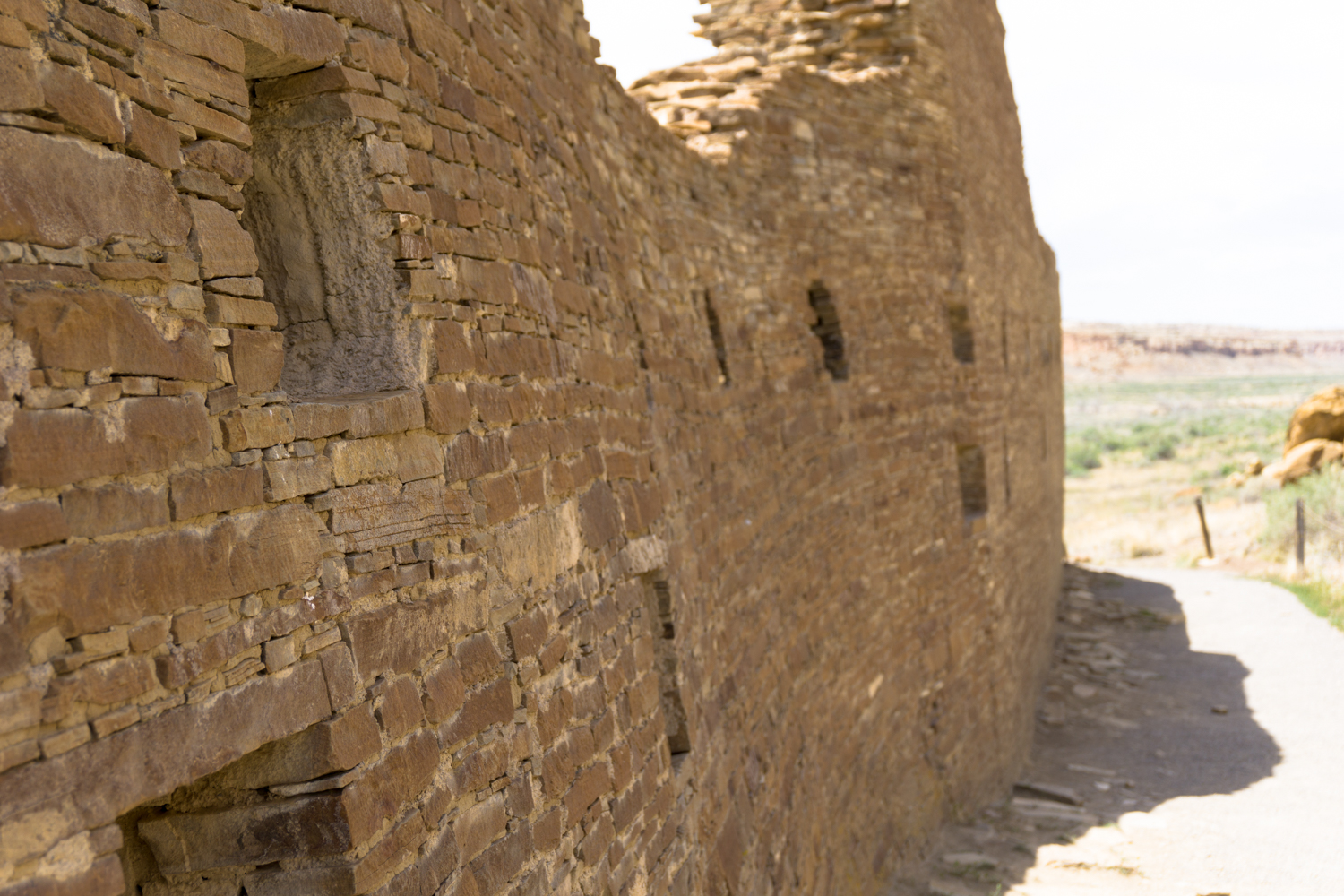 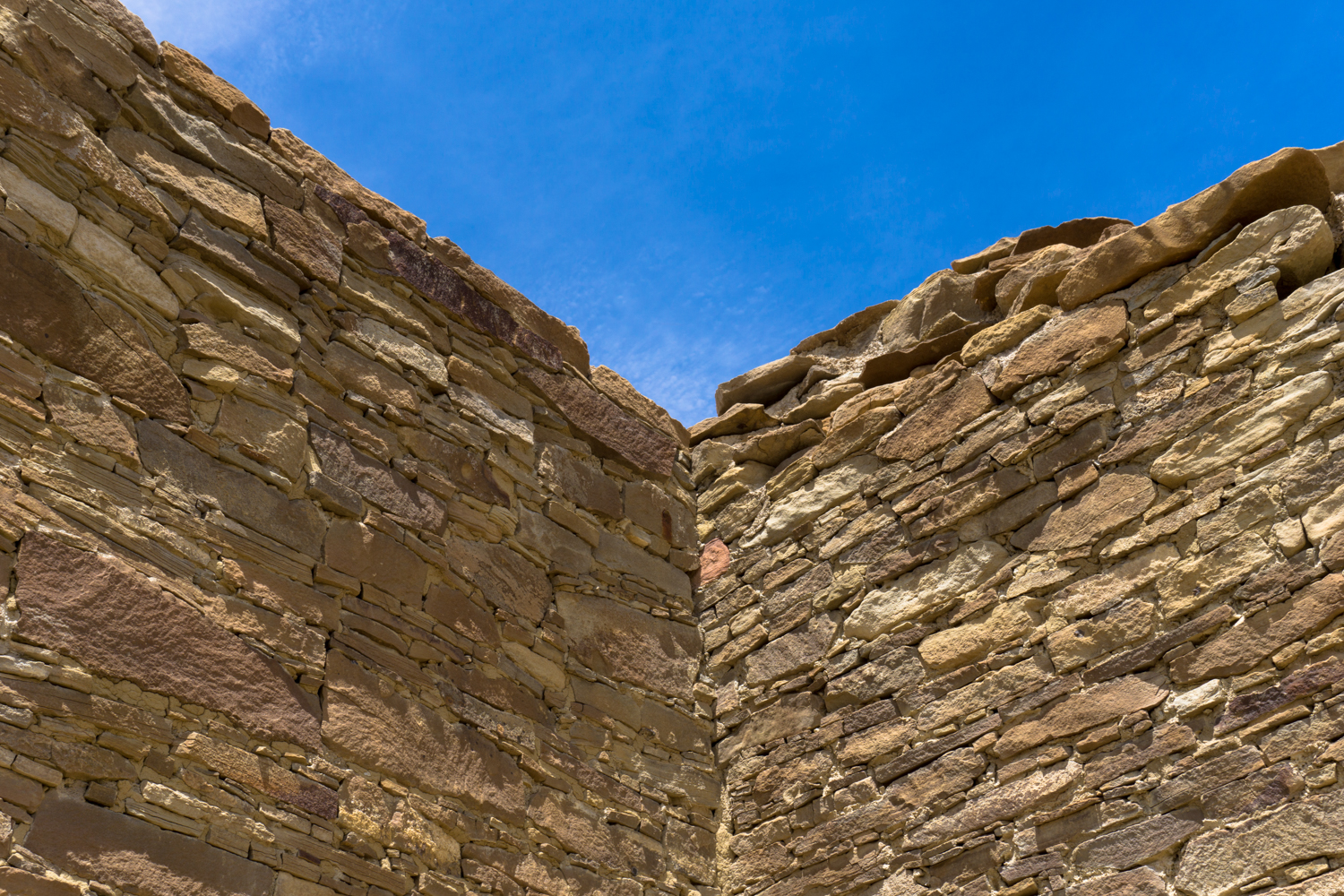 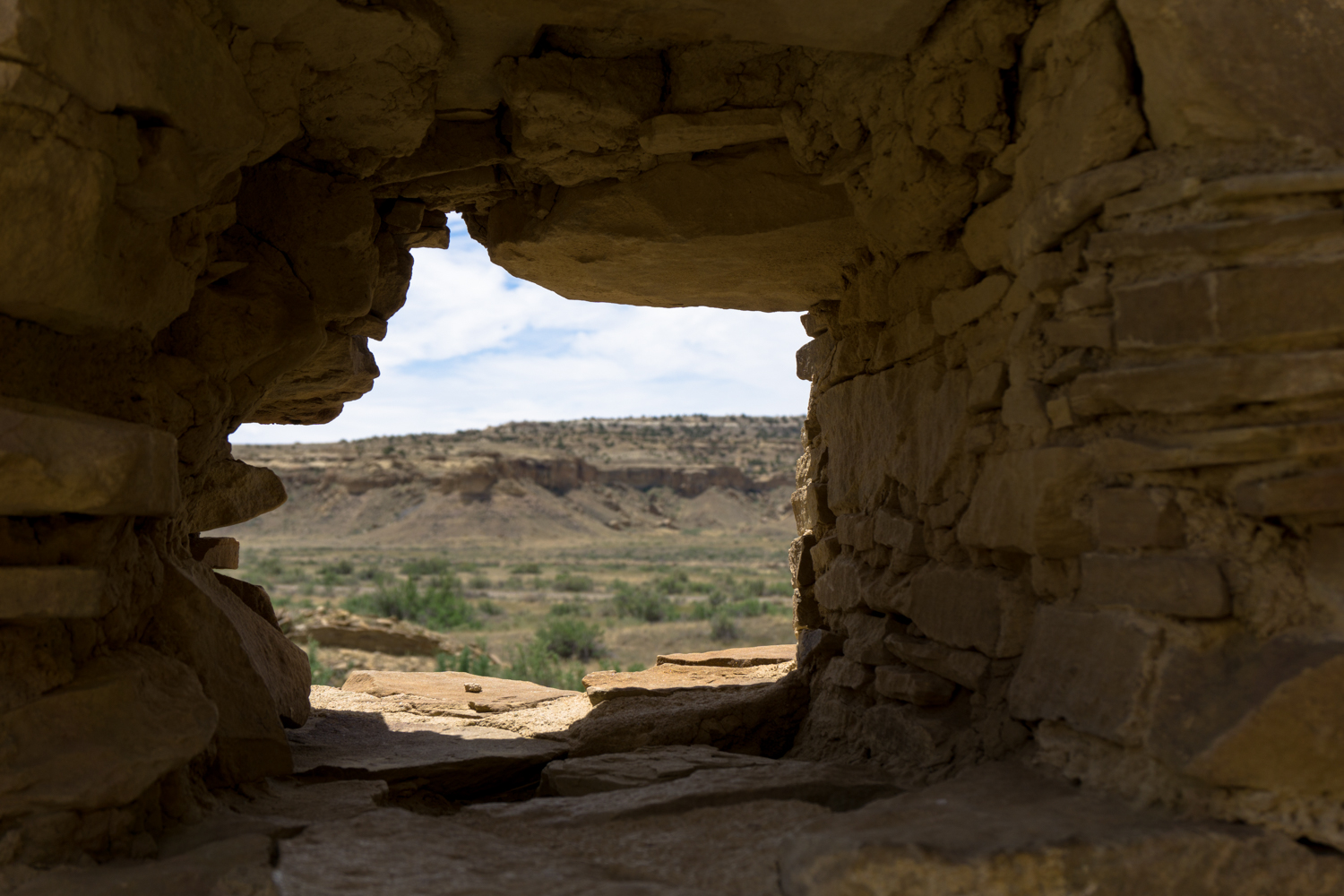 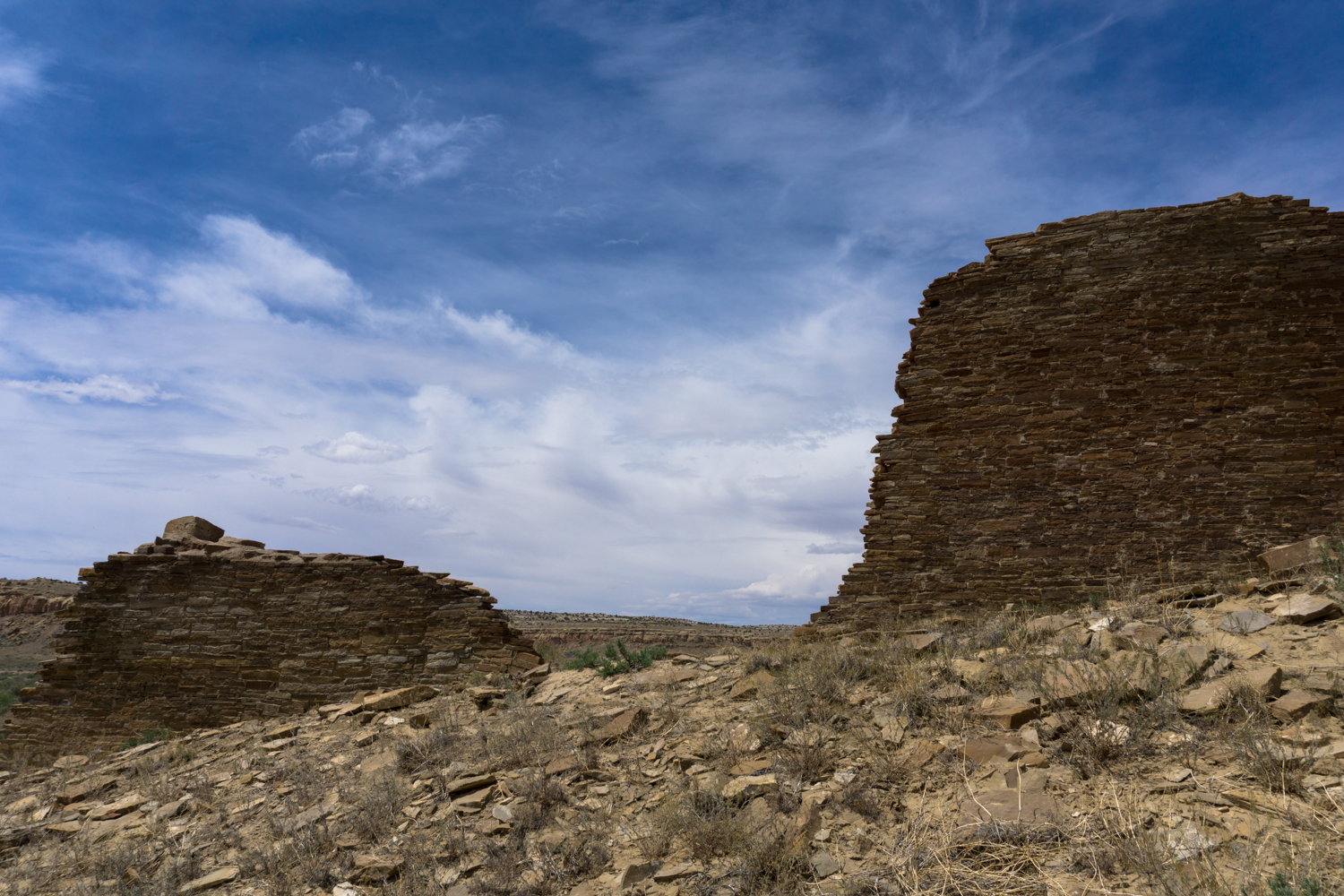 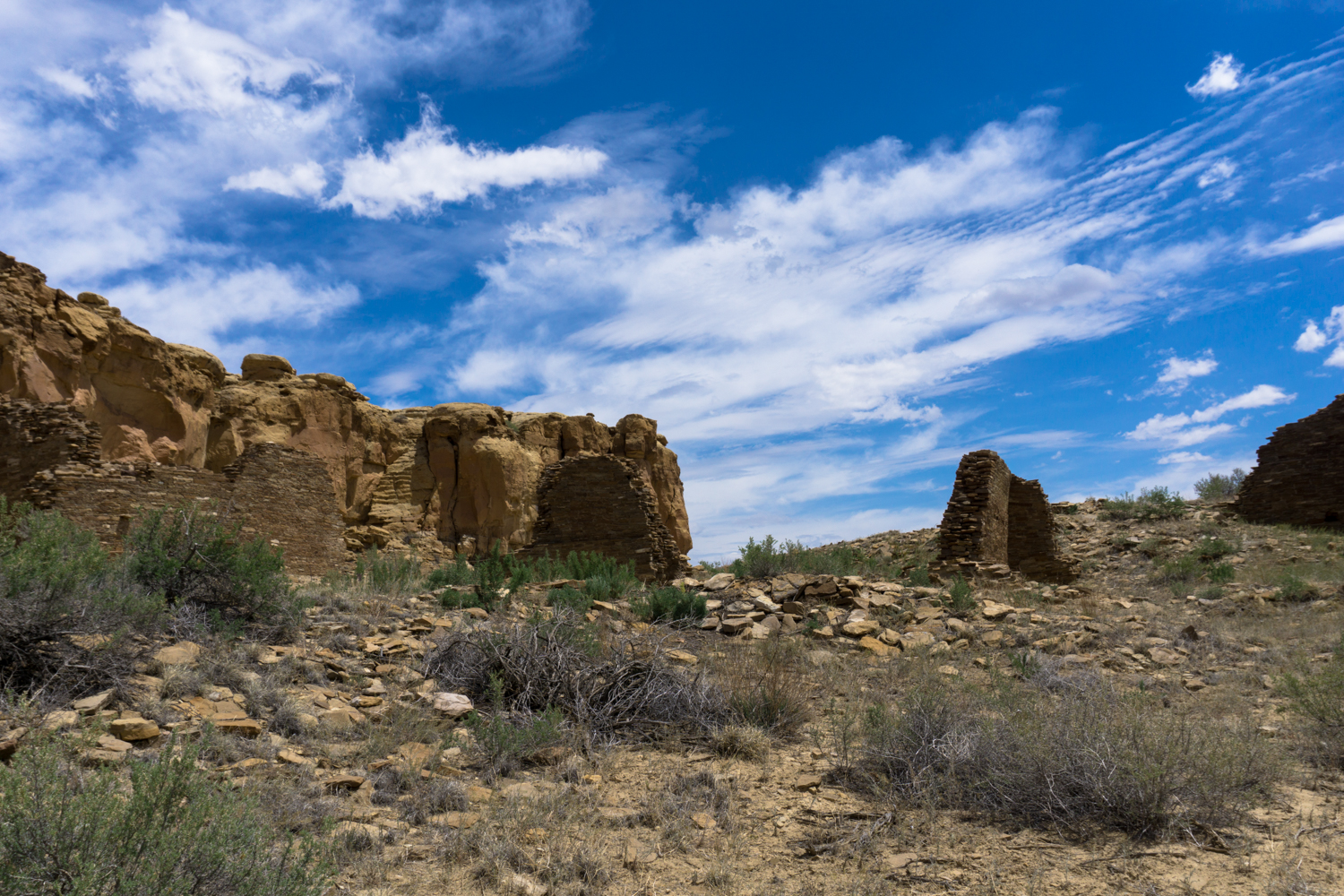 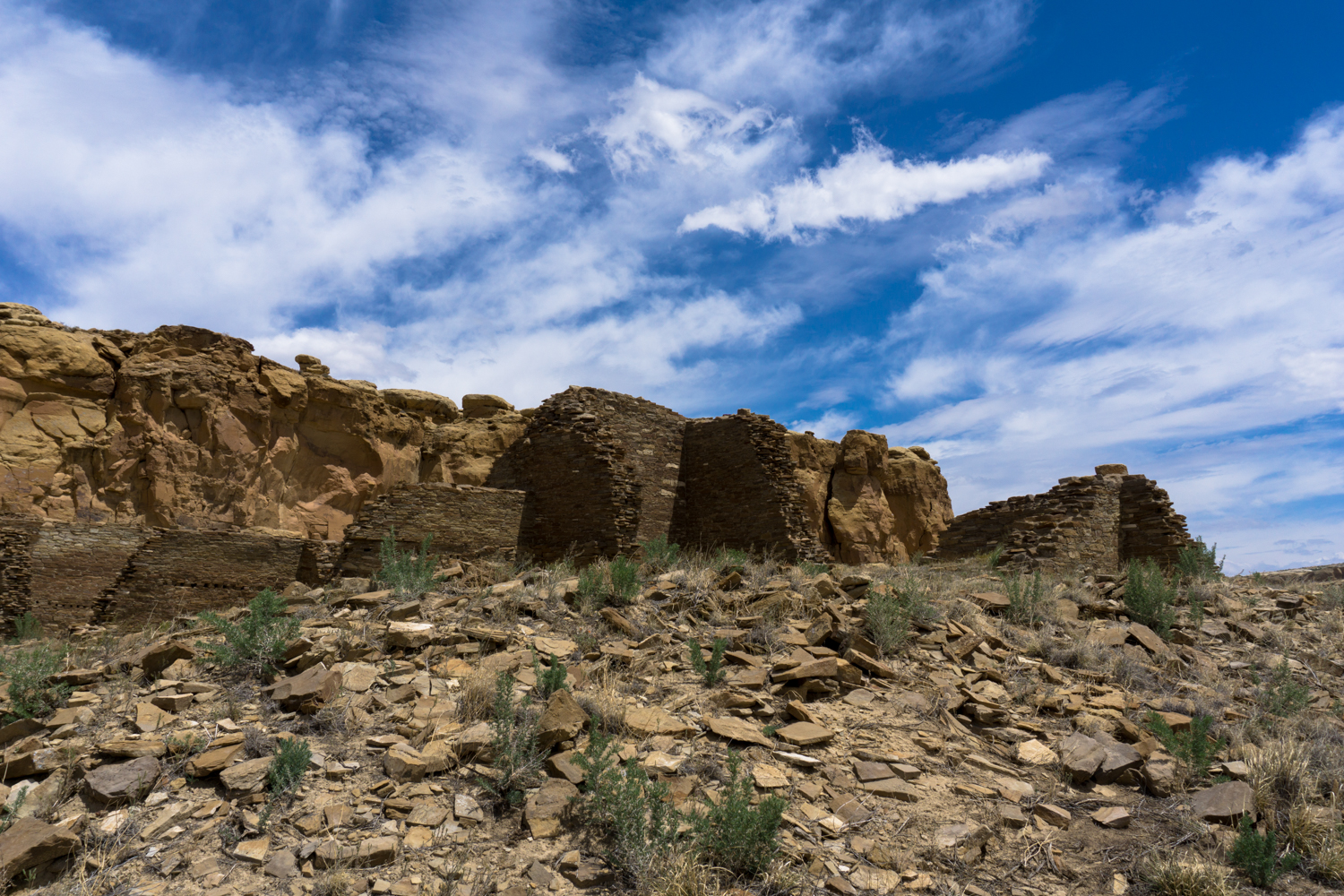 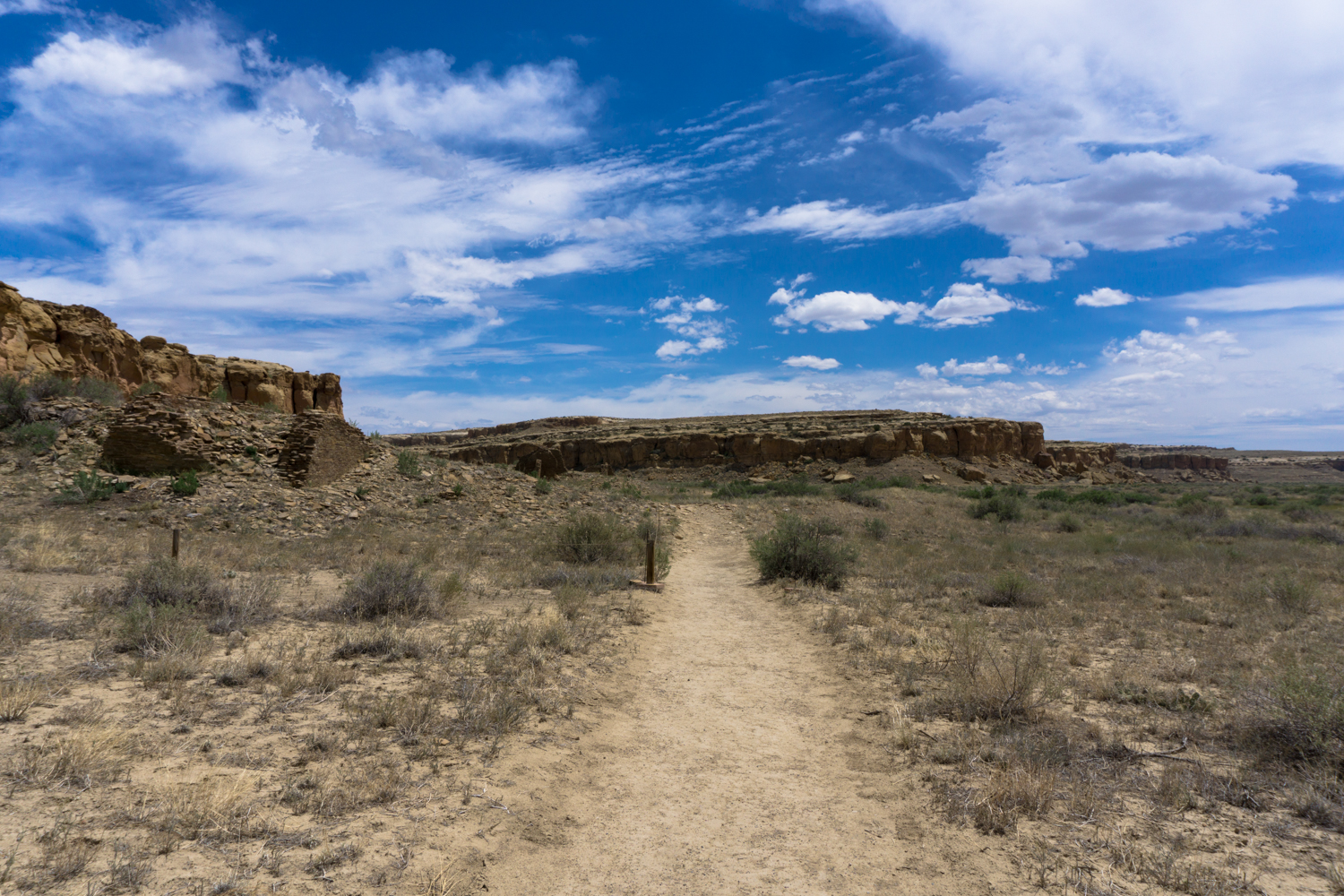 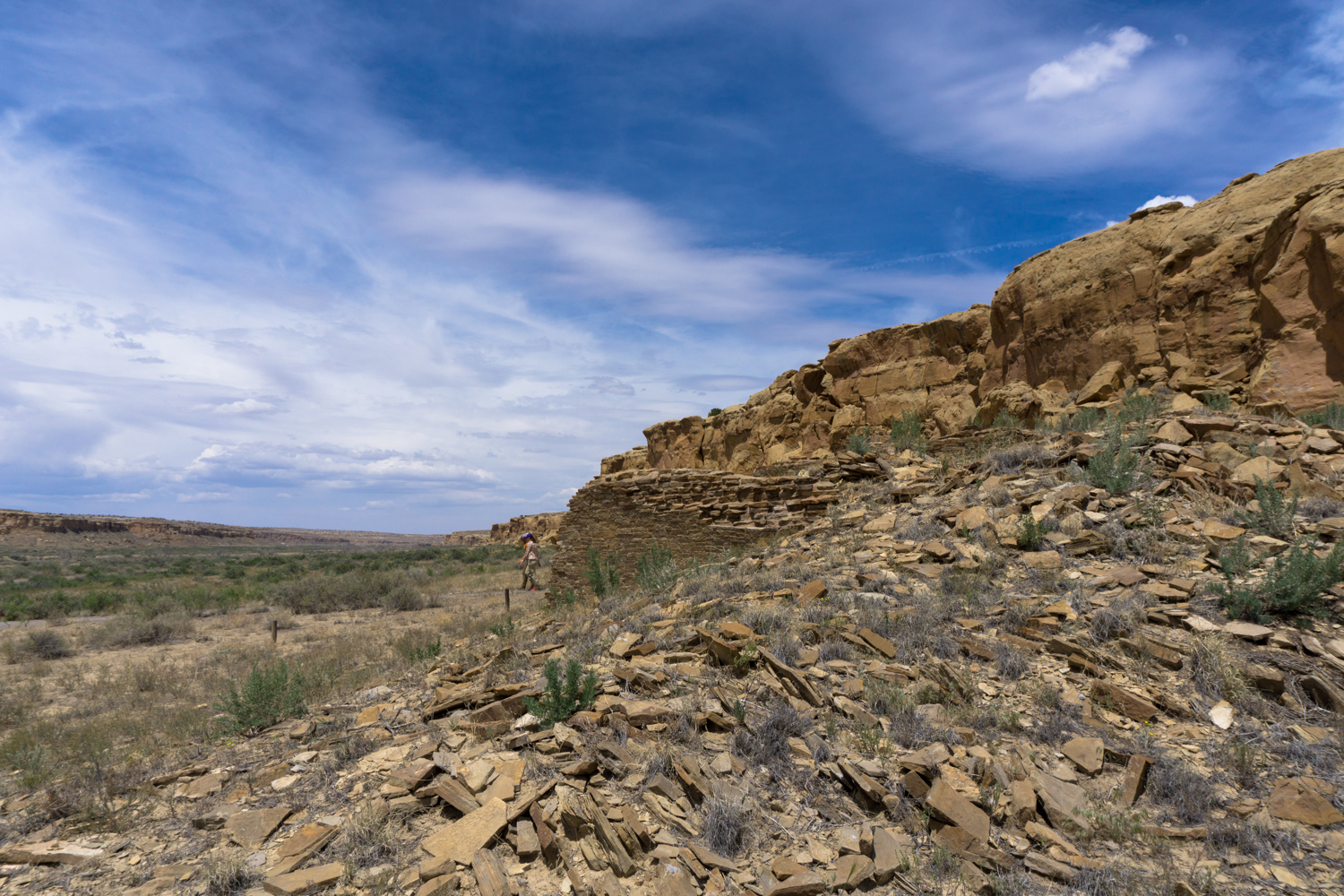 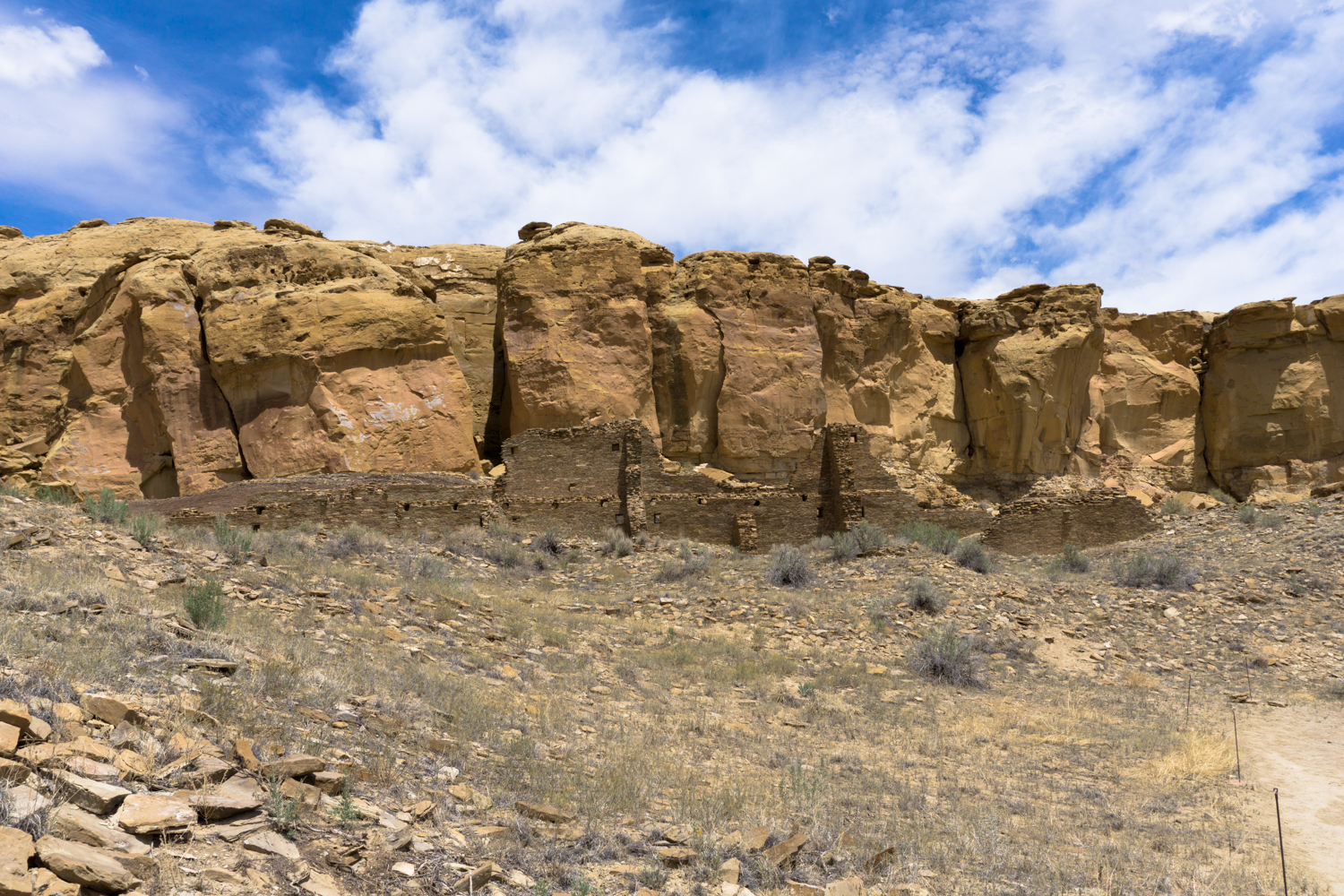 This short self-guided gravel path is well marked and easy to follow.

Gallo Campground inside the park is open year round and is available by reservation only.

The roads to Chaco Canyon are notoriously unmaintained and may not be passable in certain times due to weather or other conditions. See the full trail guide for more information. To get to the Hungo Pavi ruins, head northwest from the Visitor Center on the one-way road into Chaco Canyon. In 1.4 miles, the ruins will be on your right, marked by a small sign.