From the moment Bay Area lumber barons caught wind of massive trees that rivaled and even surpassed the mighty, but rapidly dwindling coast redwood, they set their sites on the sequoia groves of the Sierra Nevada. With an admirable haste that was as devastating as it was inefficient, lumber companies spearheaded by the Sanger Lumber Company went to work on some of the most accessible groves in the upper Kings River watershed – Converse Basin Grove, Converse Mountain Grove, Indian Basin Grove, and Big Stump Grove. 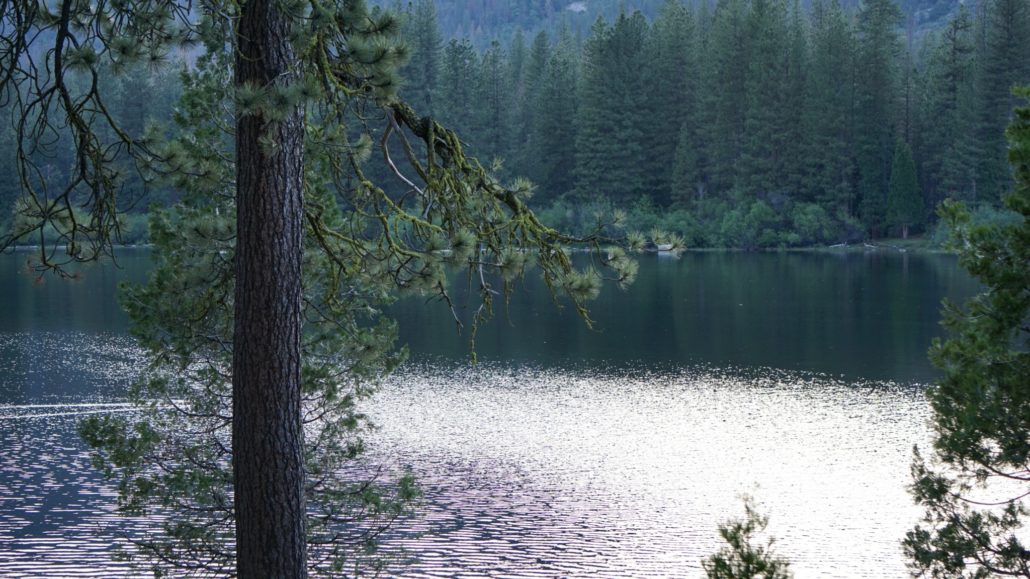 Within a few short decades, these lumber companies thoroughly extirpated the groves along with the co-mingled sugar pines, white fir, and incense cedar in a drive to profit off of the rampant growth of San Francisco. With the low-hanging fruit on the west side of Park Ridge now picked, the nearly defunct Sanger Lumber Company turned its eyes further east to the timber surrounding Tenmile Creek. After the Sanger Lumber Company finally made good on its threat to go belly up in 1905 (sequoia timber was never profitable, making the destruction even more galling and senseless), Thomas Hume and Ira Bennett purchased the Sanger Lumber Company and re-christened it the Hume-Bennett Lumber Company. 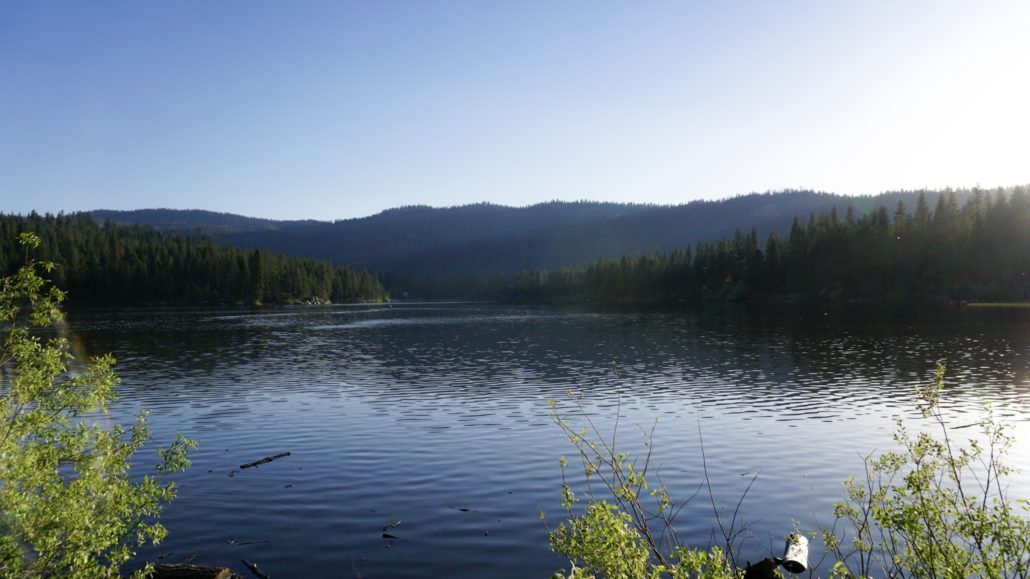 In order to aid the movement and storage of timber east of Park Ridge, Hume and Bennett deduced the need for a reservoir near the center of their operations. Following the construction of a damn built by John Eastwood across the outlet of a vast meadow known then as “Long Meadow,” newly christened Hume Lake began to fill. The water from the reservoir would be use to store logs and later shuttle them along a 73-mile flume – the longest ever created – down hill to the town of Sanger where the old Sanger Mill was located. 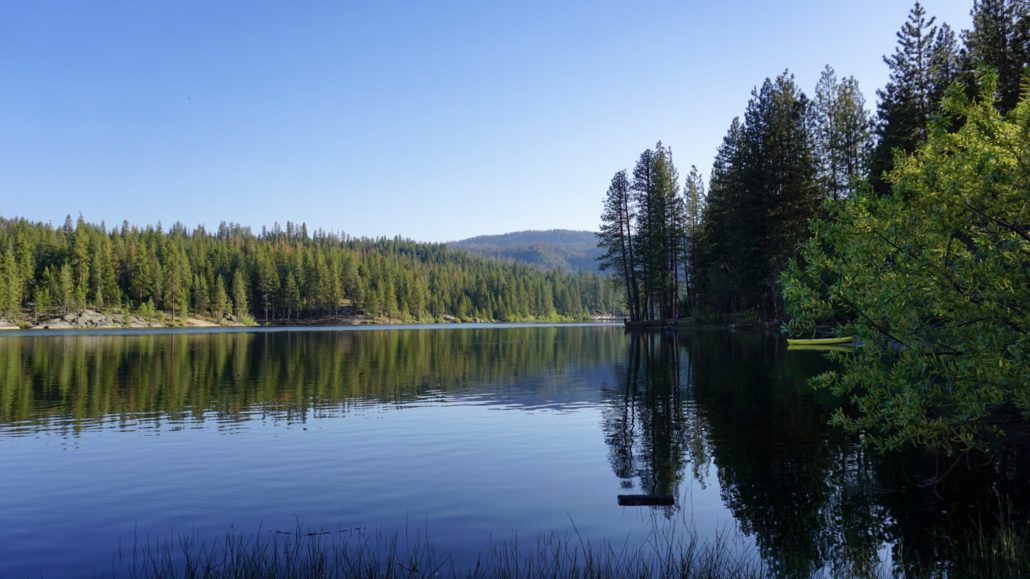 For twelve years, Hume and Bennett clear-cut the surrounding forest until a forest fire wiped out their entire operation in 1917. The lumber company resurrected itself, only to finally shut down logging operations for good in 1924 before turning over the land surrounding the lake to the United States Forest Services in 1935. For 65 years, the lake and surrounding forest – with the exception of an inholding containing the Hume Lake Christian Camp – belonged exclusively to Sequoia National Forest until the establishment of Giant Sequoia National Monument encompassed the area in an effort to protect and maintain the regeneration of the destroyed groves. 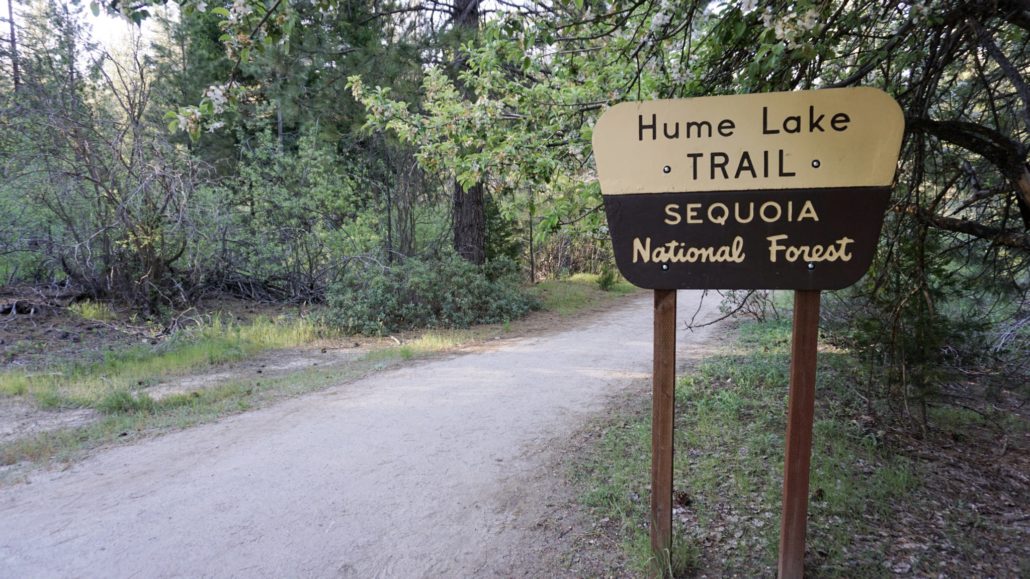 Today, the lake is given over entirely to recreation. Picnic areas, a campground, a boat dock, and recreation facilities operated by the Christian Camp make the lake a hot spot of activity in the northern parcel of Giant Sequoia N.M. You can also follow a patchwork trail around the lake, which despite its destructive and ultimately wasteful beginnings is today an extremely pleasant place to take an evening stroll. 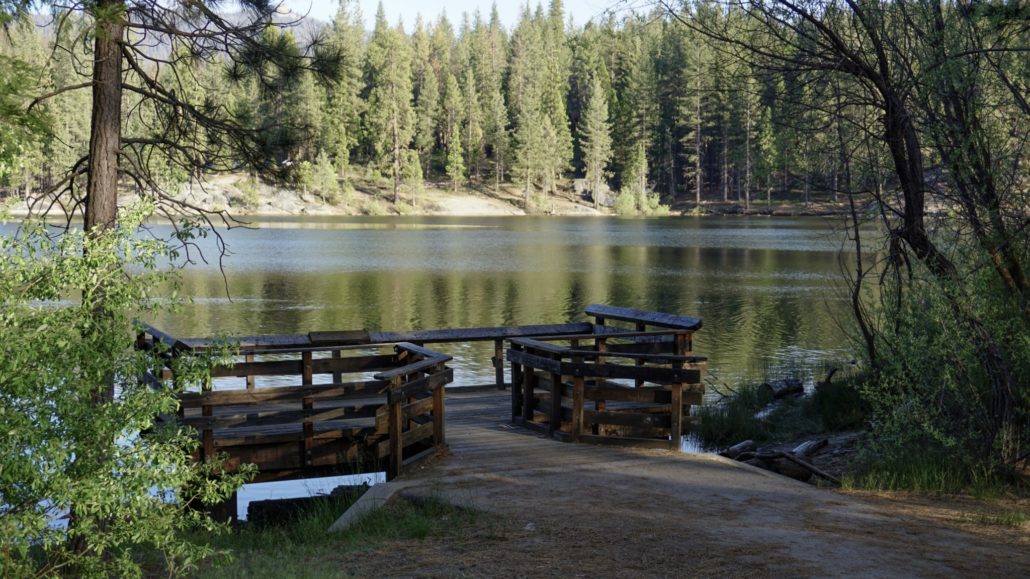 From the Powdercan Picnic Area, find the signed Hume Lake Trailhead and commence walking along the wide, smooth path. As you walk roughly northeast, you pass through pines and cedars regrown since the cessation of logging in 1924. As you progress, numerous side paths lead to the banks of the lake to convey leisure seekers to nice spots for frolicking, fishing, and swimming in the cold water. After 0.5 mile, the merges into a dirt road that continues in the same direction toward the eastern end of the lake. 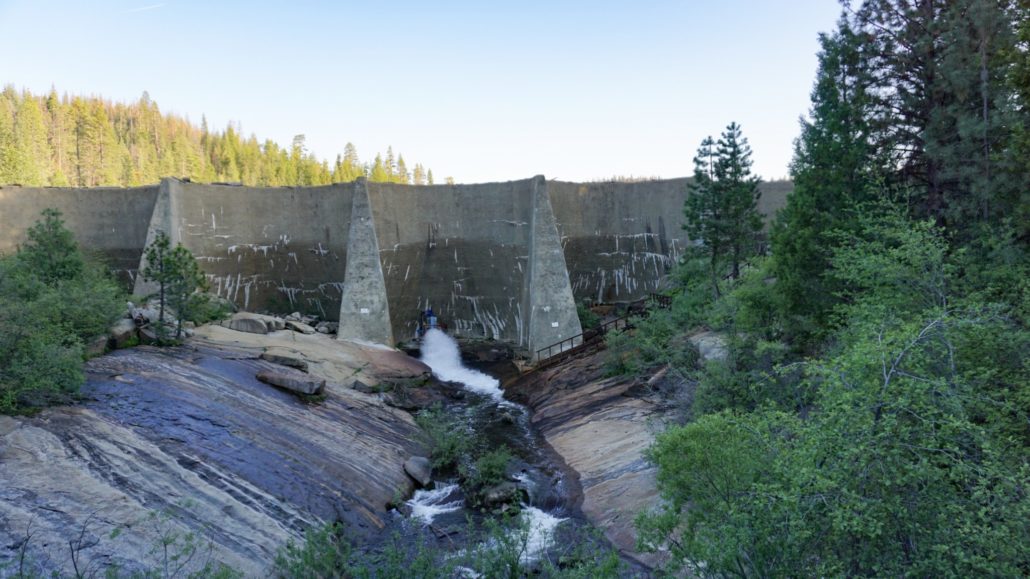 At 0.9 miles, a paved footpath descends into Tenmile Creek’s ravine to circumvent the 110-year old dam that still stands in its nearly original state. The trail wends through dense forest before approaching a bridge spanning Tenmile Creek. From the bridge, you get a good look at the curving buttresses that reinforce the dam and enable it to impound a massive amount of water. 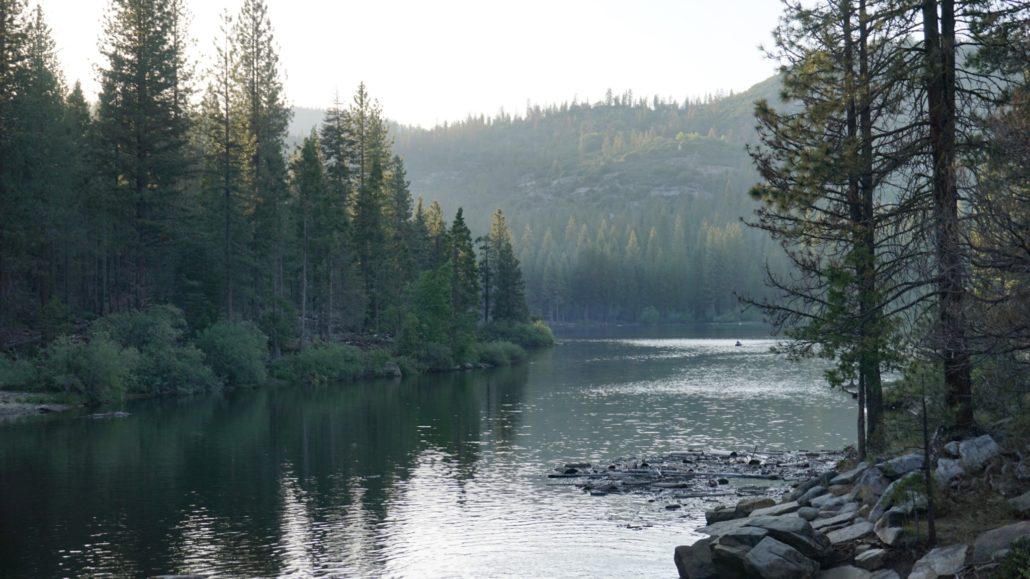 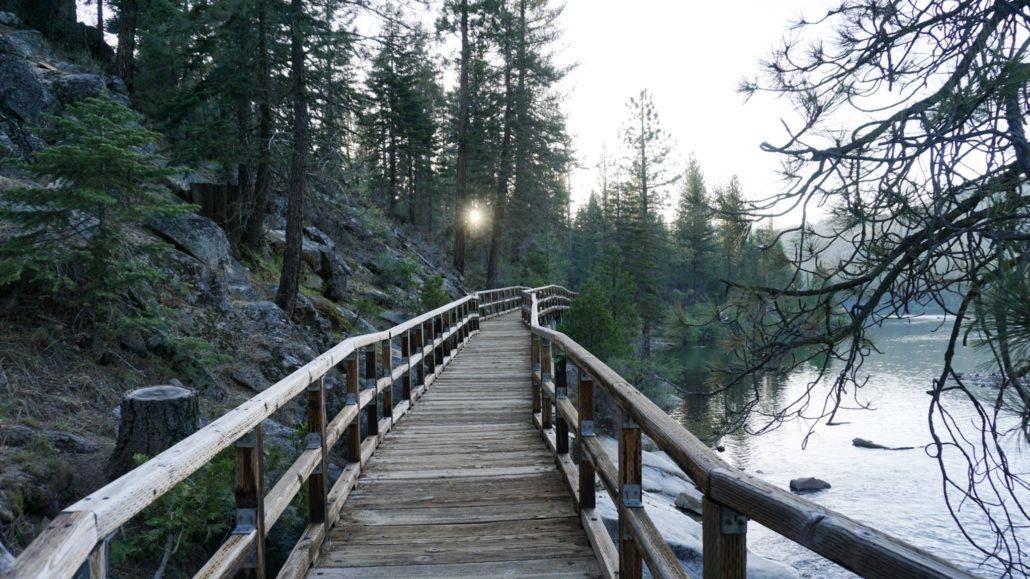 As the trail approaches Tenmile Creek, it joins a bridge crossing the creek that then transitions into a boardwalk. Nice views across the lake accompany the sound of rushing water from the creek. The boardwalk continues north along the west side of the cove before quickly transitioning back into a single-track trail. The trail threads its way between the lake shore and busy Tenmile Drive as it heads west toward its terminus just south of the Christian Camp. 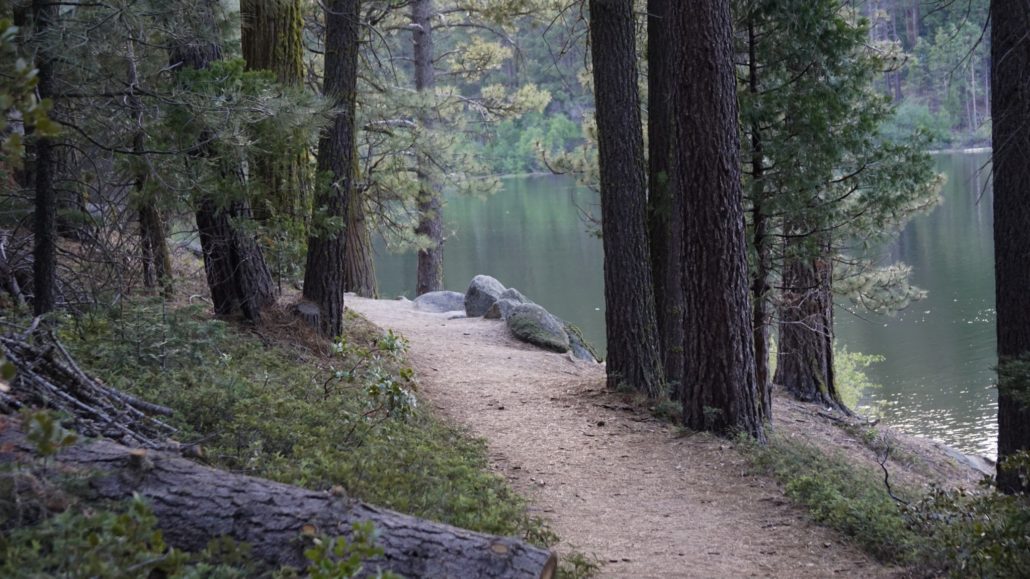 To return to the trailhead, walk across the lawn on the west end of the lake toward the snack shop, and then continue past the snack shop to the picnic area. 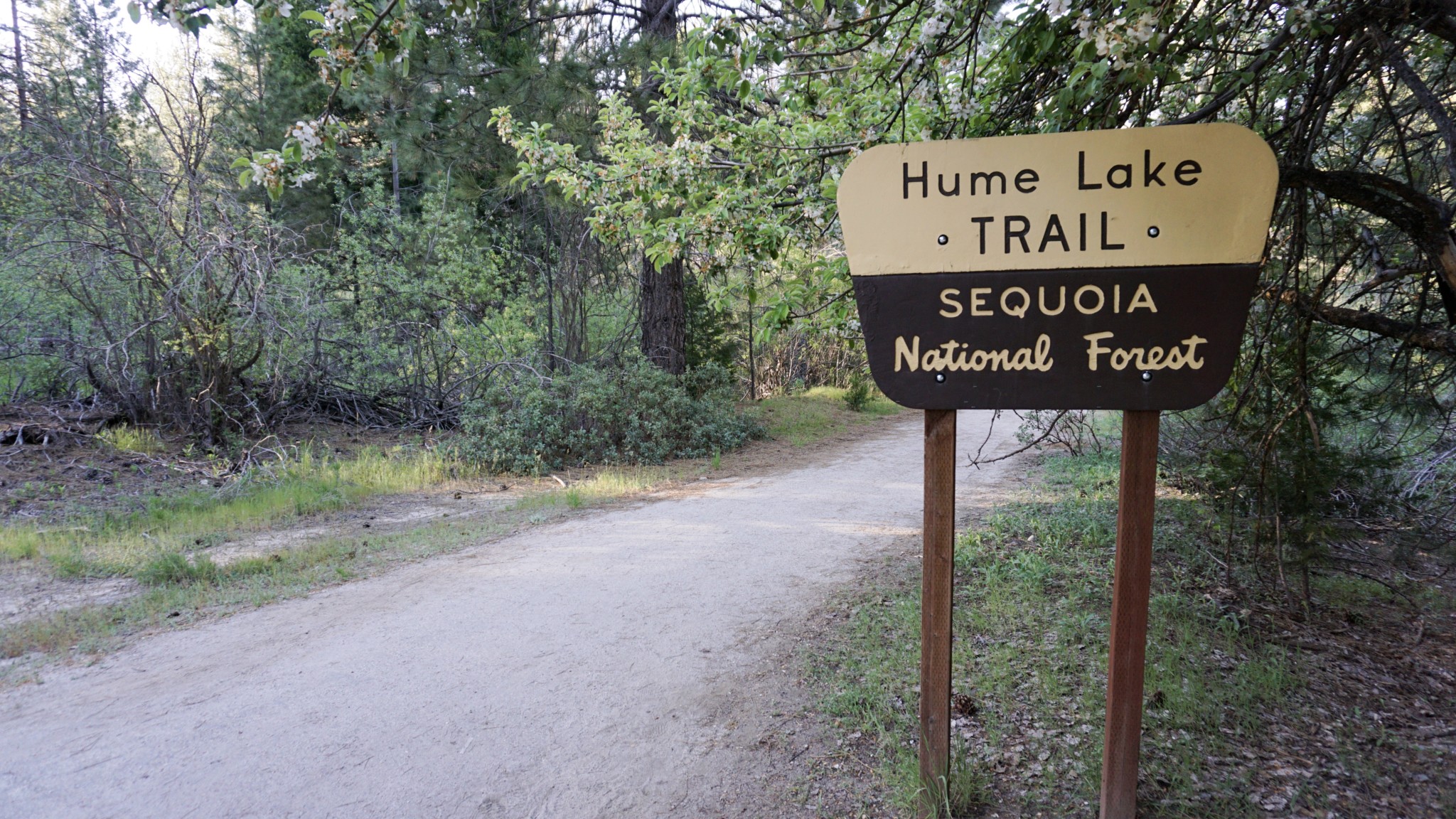 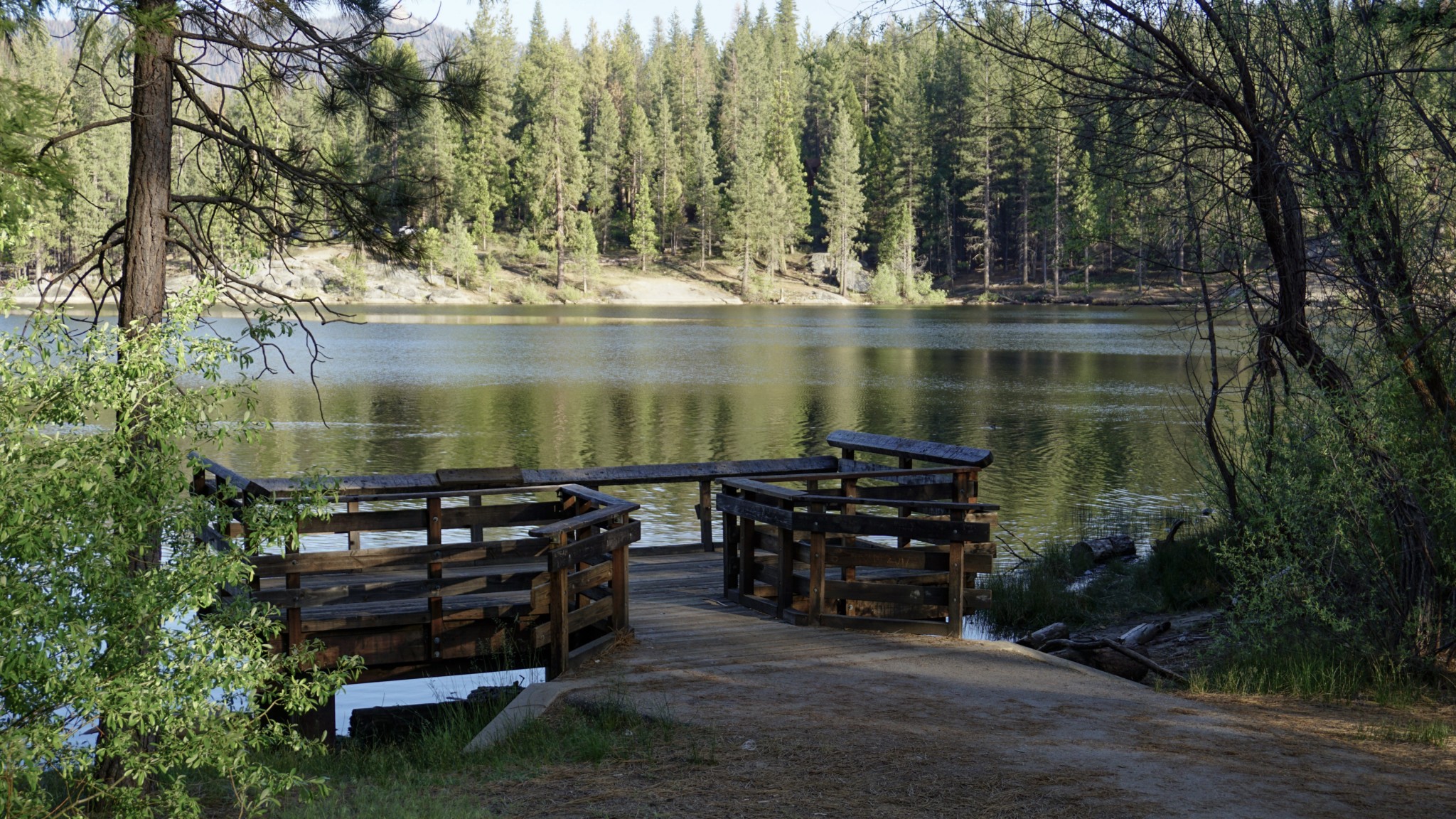 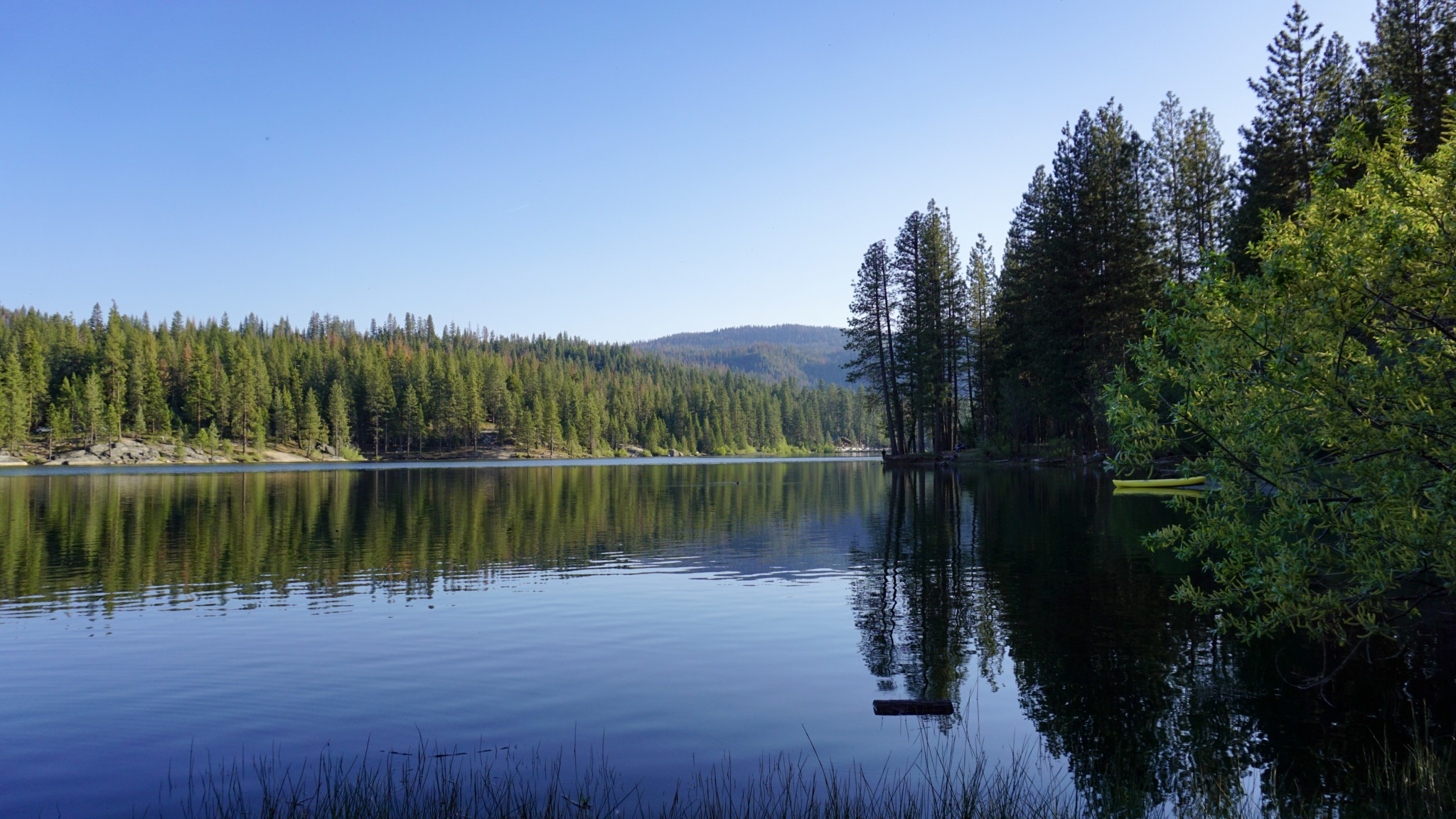 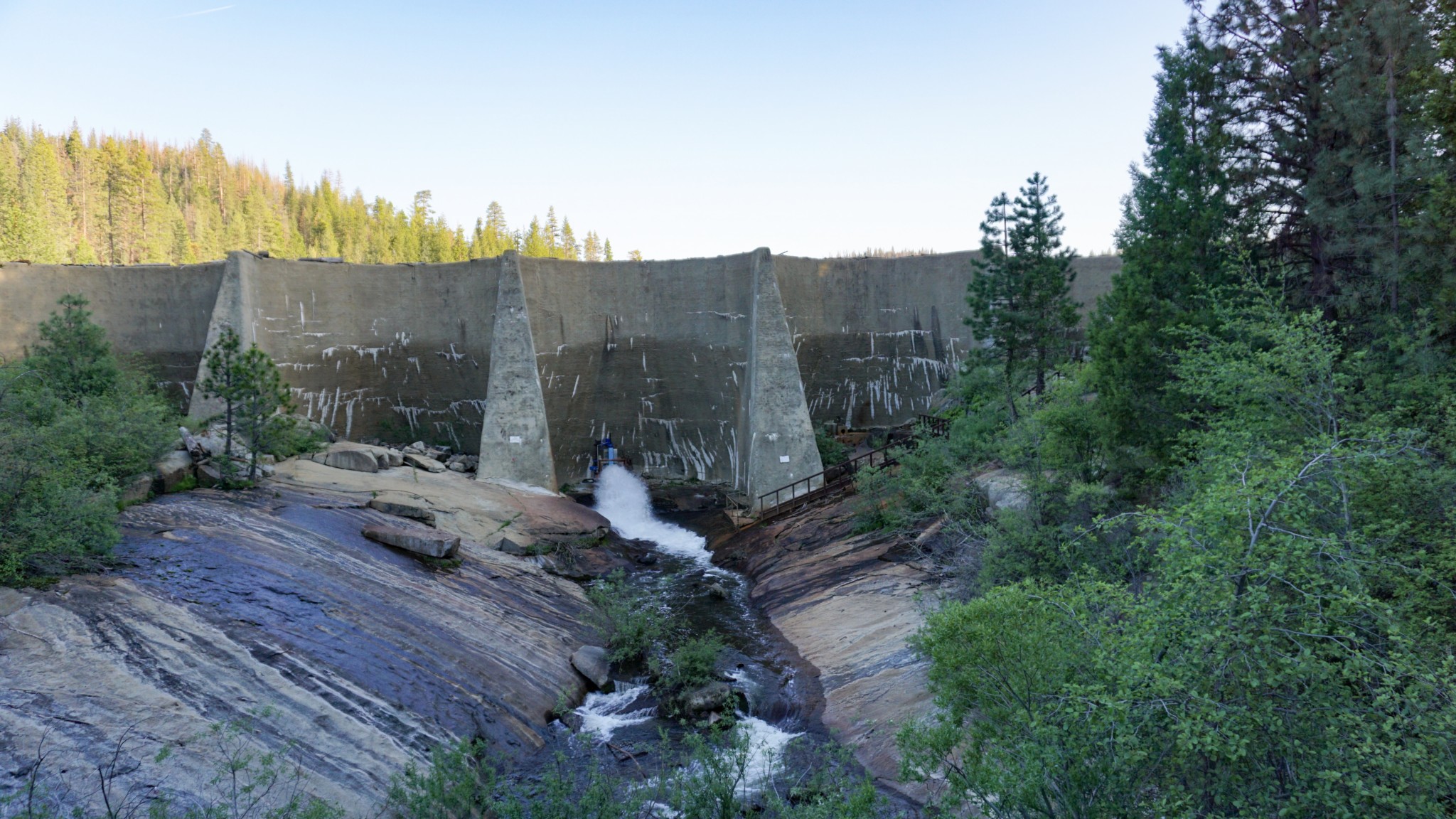 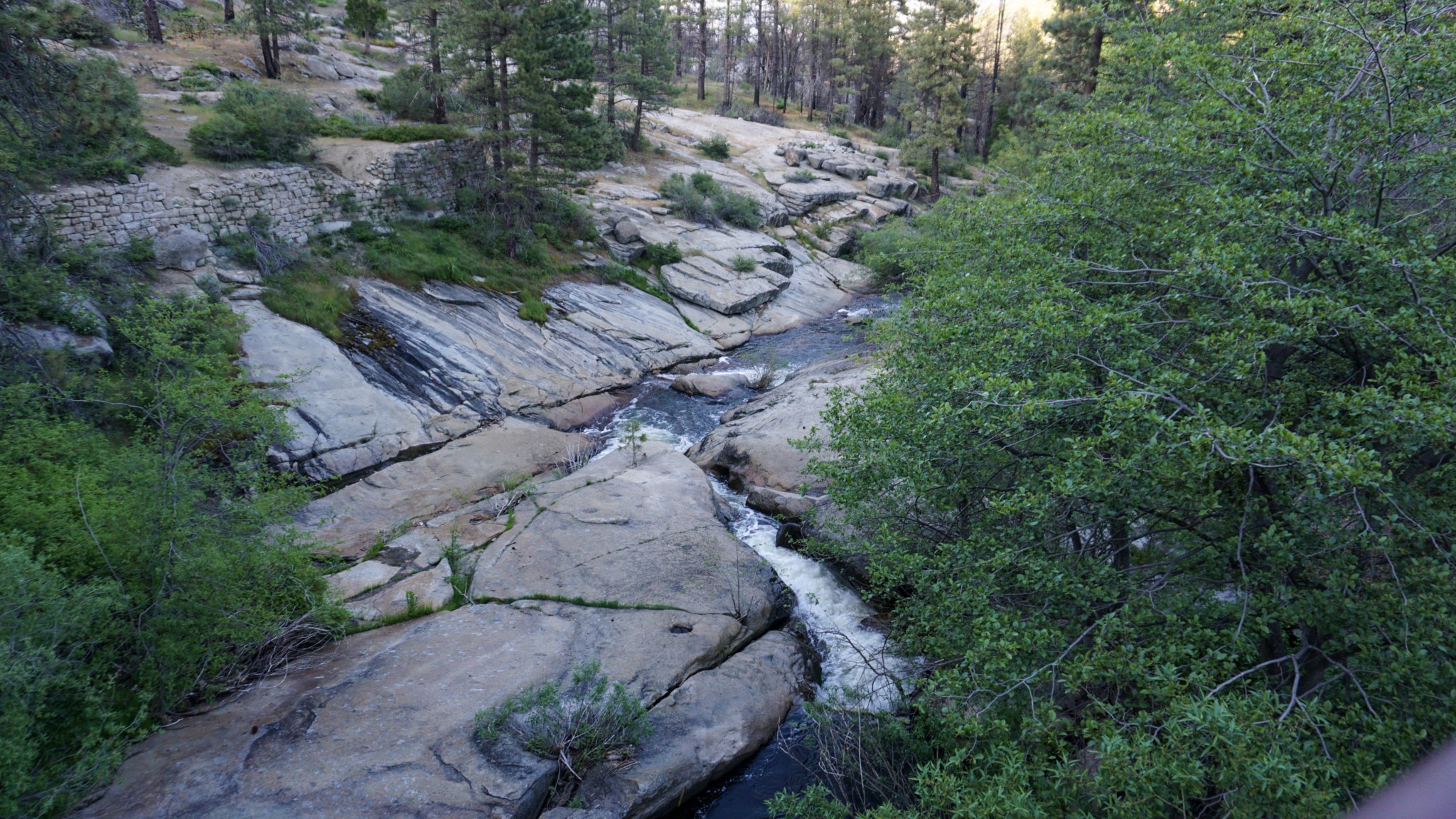 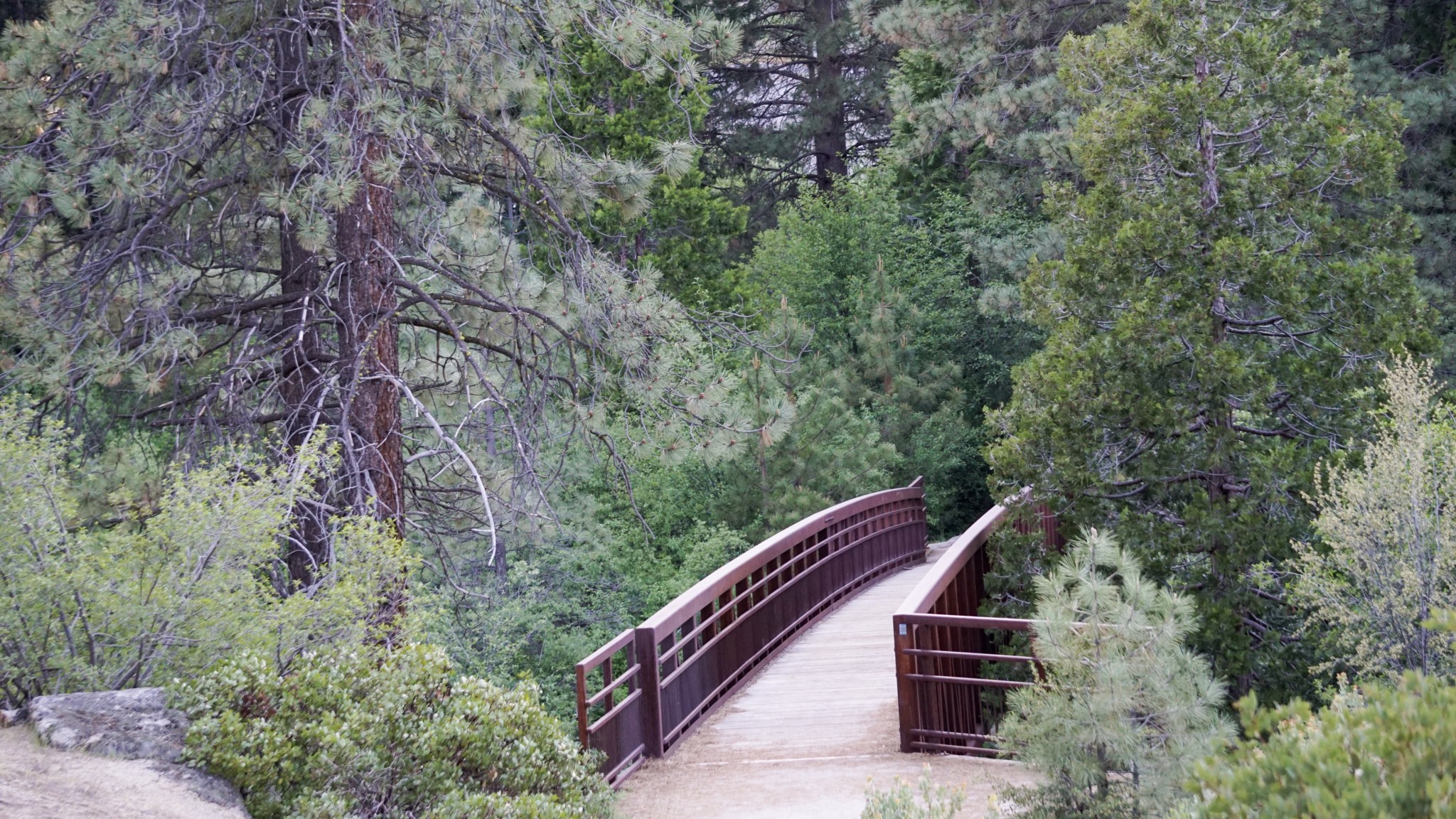 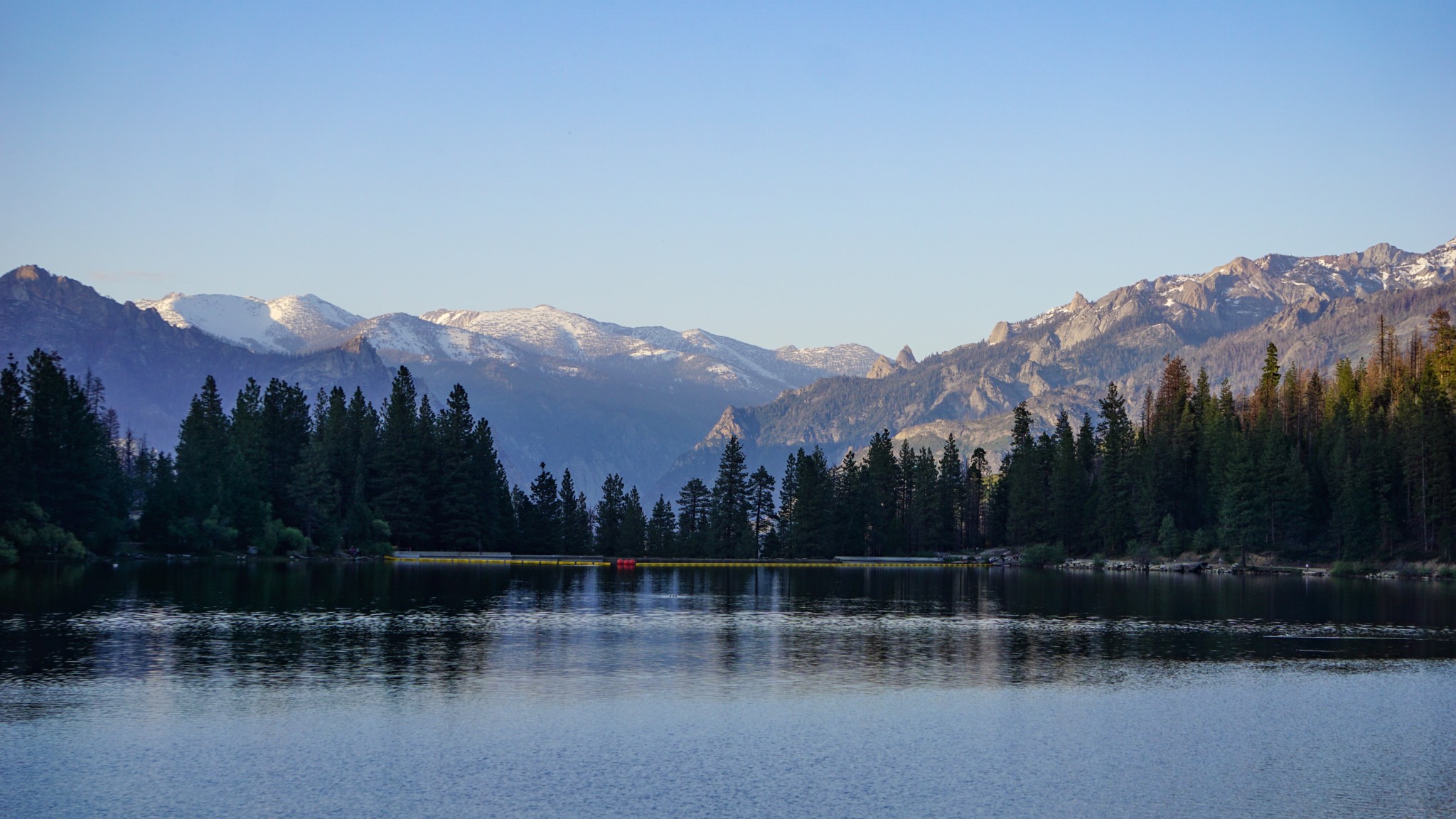 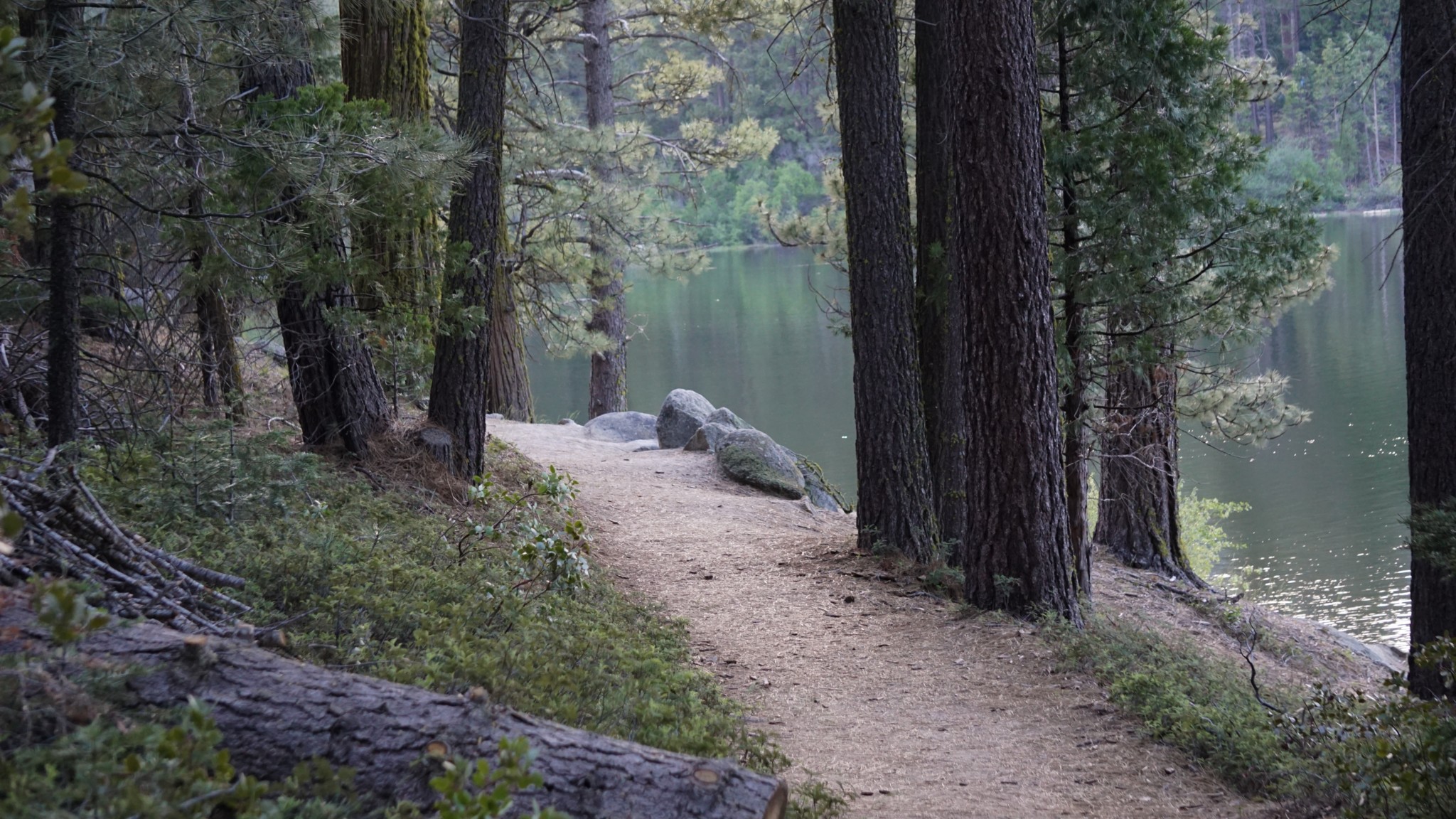 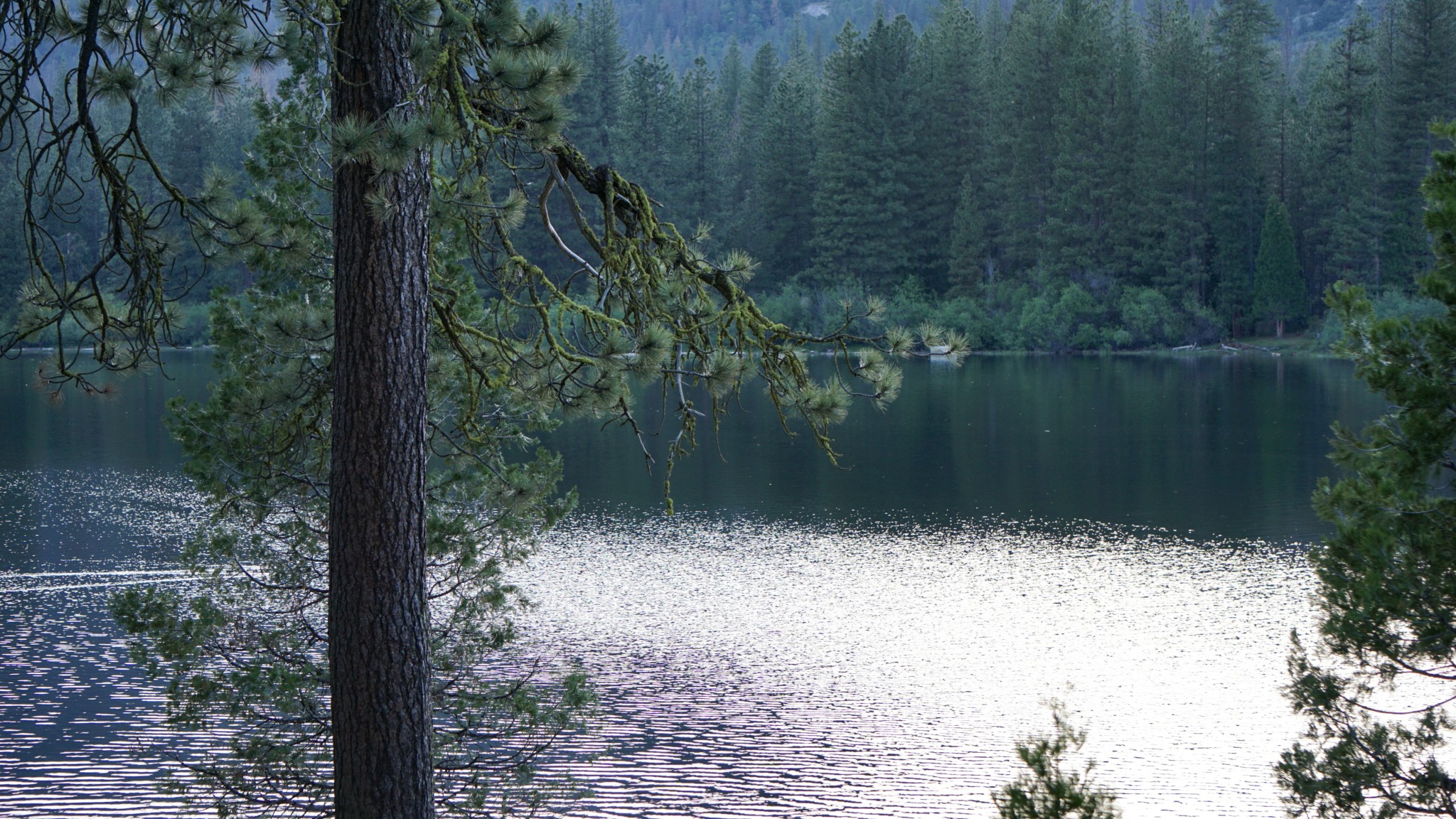 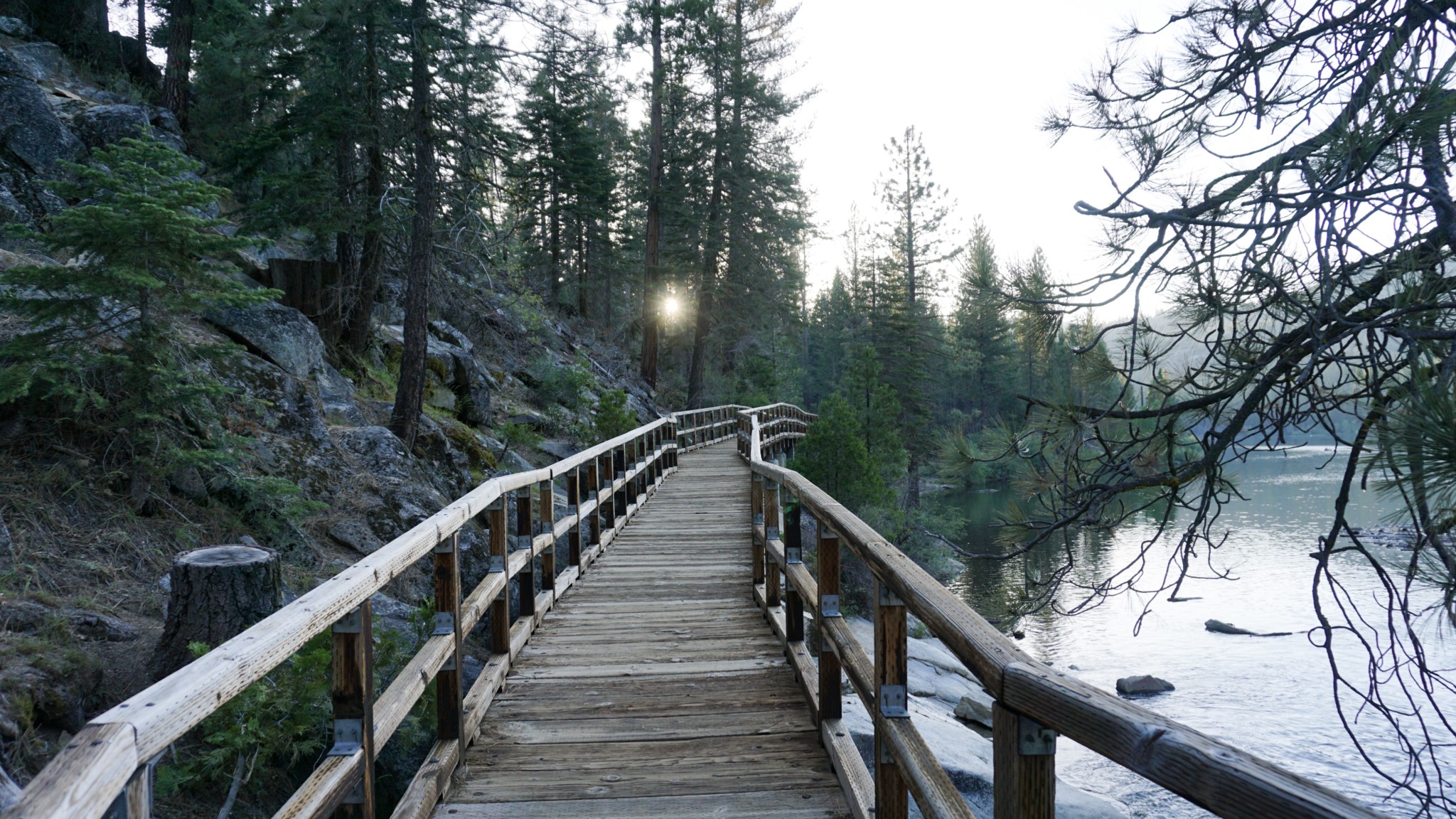 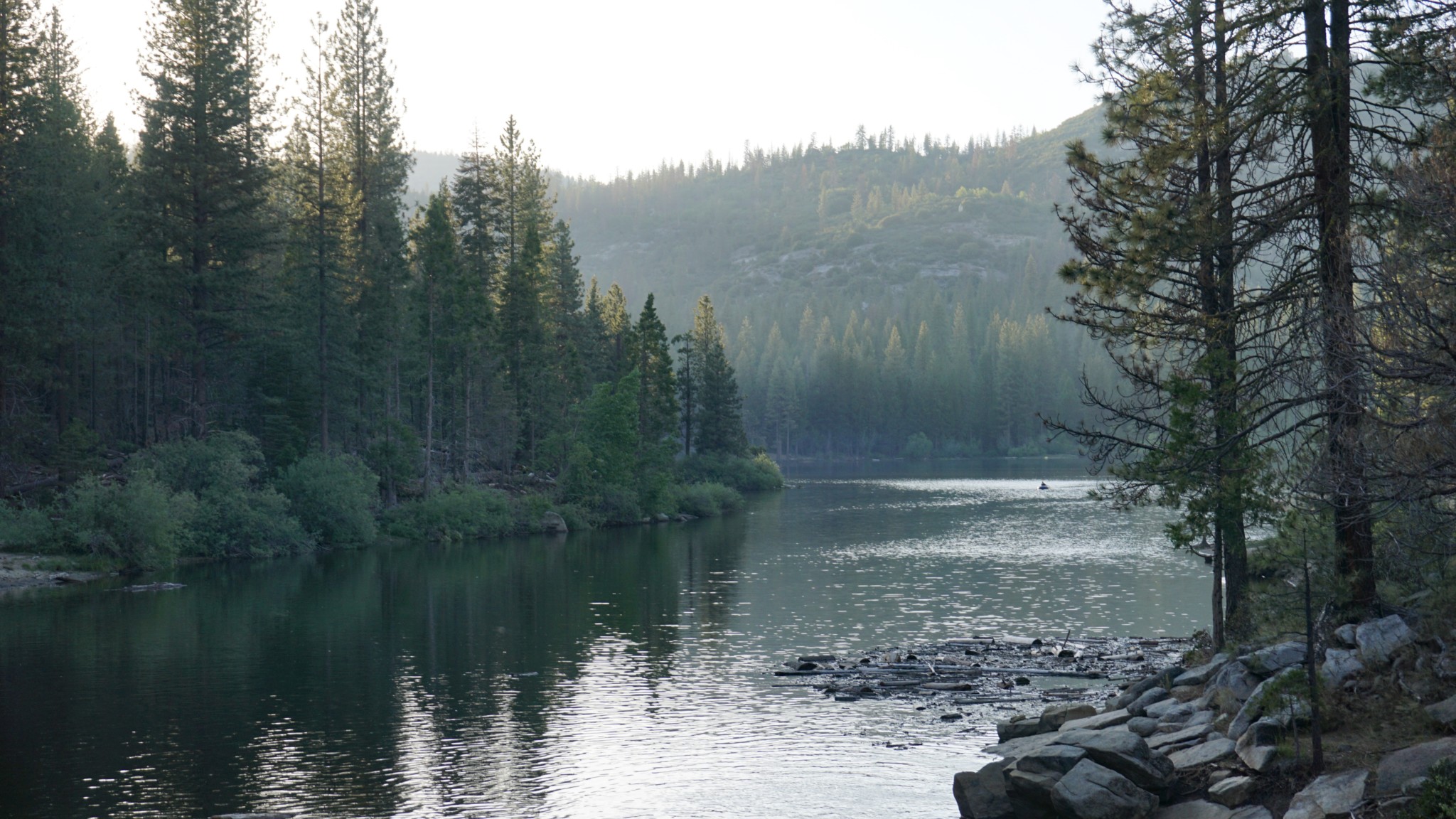 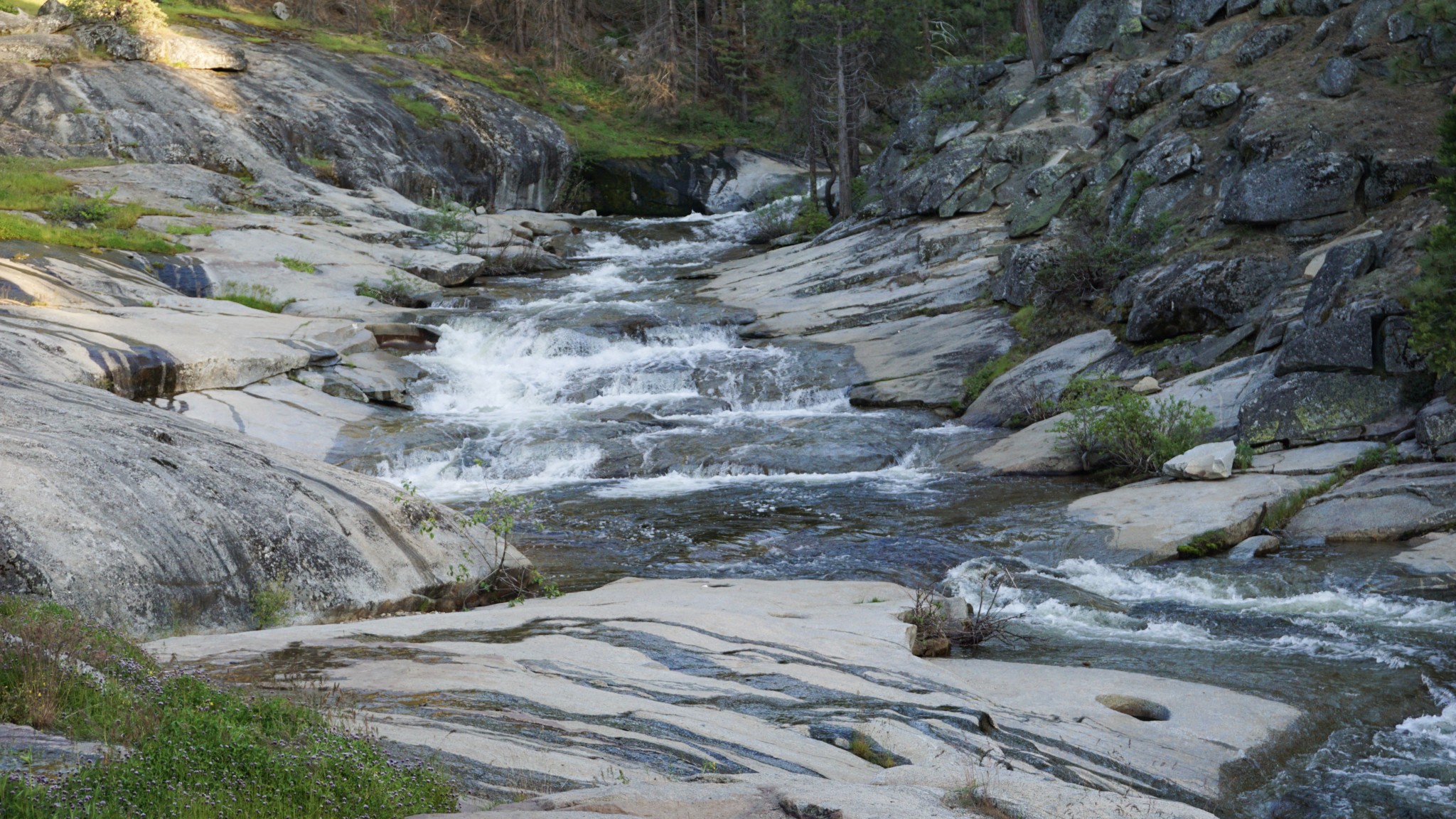 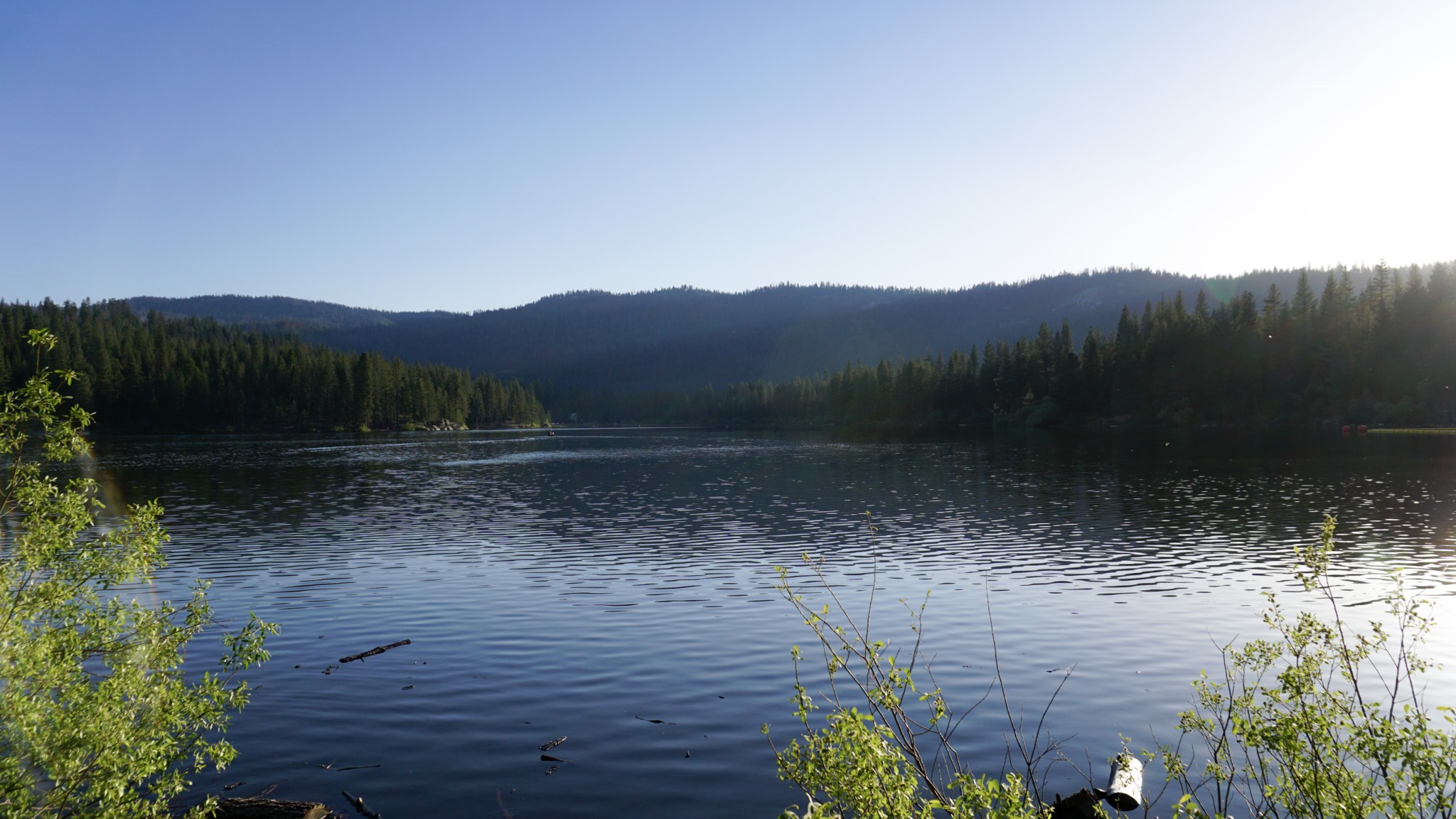 The trail is a hodgepodge of single-track, old dirt roads, paved roads, a short wooden boardwalk, and a walk across the lawn. Despite this potpourri of surfaces, the route is easy to follow if you stick to one guiding principal: Stay close to the water.

The adjacent Hume Lake Campground is a good bet for nearby camping.

From Fresno, head east on CA-180 toward Kings Canyon, passing through the Big Stump Entrance to Kings Canyon National Park. From the Big Stump Entrance, continue on CA-180 for 9.2 miles, passing the junction with Generals Highway and the Grant Grove Village Area. Turn right onto Hume Lake Road and follow its sinuous course for 4.4 miles to the Powdercan Picnic area, which doubles as the trailhead for Hume Lake. Turn left into the lot and park.