The Santa Rosa Mountains offer some of the most remote, difficult, and rewarding hiking in all of Southern California. This unforgiving spur of the Peninsular Ranges divides Borrego Valley from the Coachella Valley, and the scruffy Santa Rosa Crest serrates the desert sky at elevations generally exceeding 5,000′. While much of this wild terrain lies outside the realm of most hikers, the Cactus Spring Trail – one of only two official trails in the high desert portion of the range – is an opportunity to get a taste of the magic of the Santa Rosas without biting off more than you can chew. 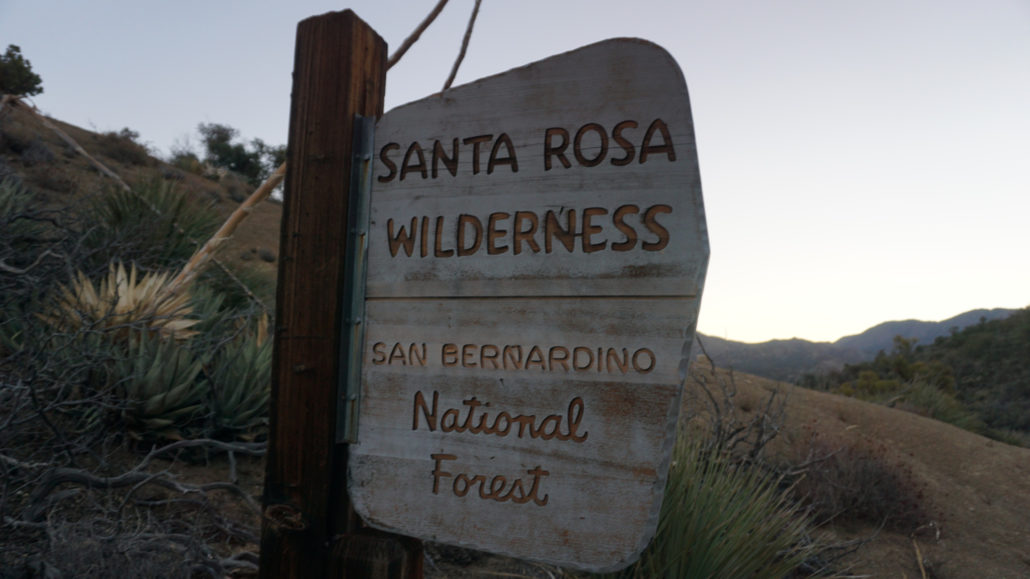 The Cactus Spring Trail roughly adheres to an alignment of an ancient Cahuilla route that traversed Martinez Canyon from the desert floor before mounting a saddle connecting Martinez Mountain to the main block of the Santa Rosas. The ancient trail stopped at Cactus Spring, which once served as a water source to a large Cahuilla village and remains a sacred site to their ancestors. From the spring, the trail follows an undulating course through a complex drainage system feeding Deep Canyon before connecting with other older remnants that drop down Palm Canyon toward today’s Agua Caliente Indian Reservation. 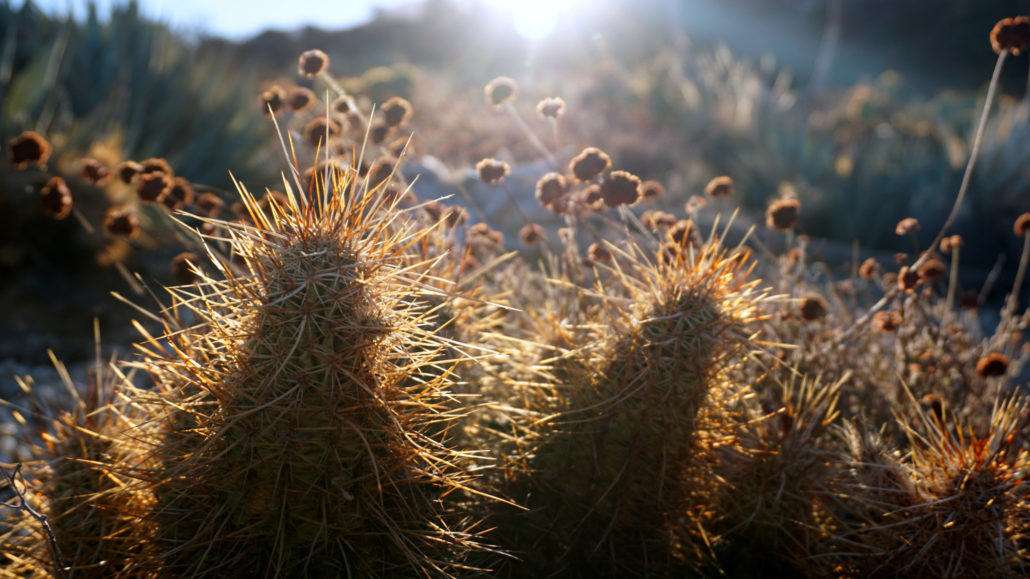 Many sections of the Cactus Spring Trail, especially those beyond Horsethief Creek, look like they’ve had very little maintenance since the ancient Cahuilla beat the path in with centuries of foot traffic. In some places, a faint, overgrown tread marked haphazardly by the occasional sign is all you have to go by unless you’re utilizing a map, a compass, and your finely honed navigational skills — which you definitely should have before you tackle this route. Sure, you could rely on the GPS track, but I don’t recommend it since a failure of your technology could leave you lost in a relatively confusing area. 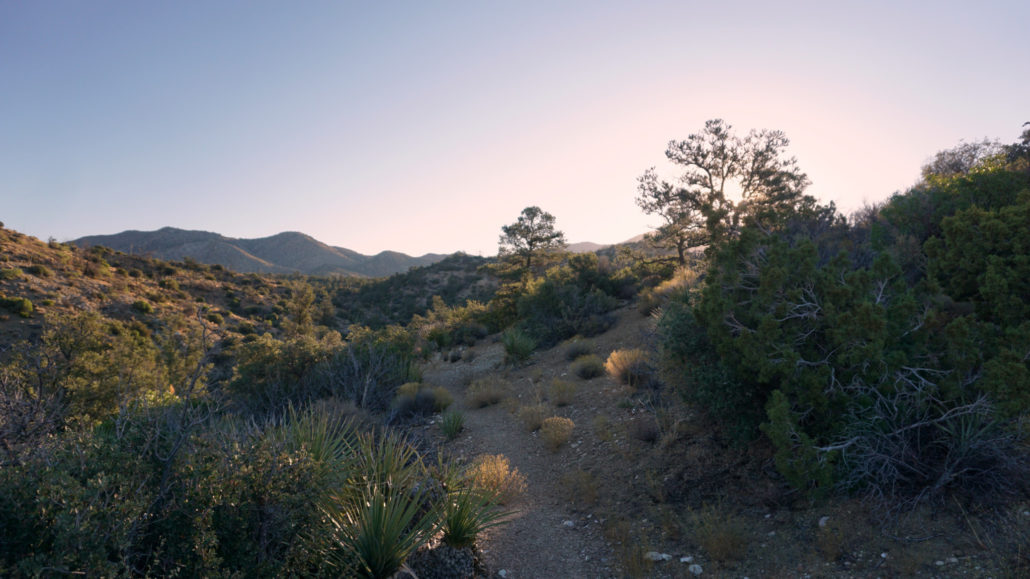 The overall 9.2 mile trip makes for a fairly challenging day hike owing to the rollercoaster nature of the first half. In navigating the complicated terrain I alluded to earlier, the trail follows a lot of ups and downs which quickly becomes tiring, especially on the return journey in the heat of the afternoon. Many hikers will content themselves with a stop at Horsethief Creek, which features year-round water except during the most extreme drought as well as beautiful riparian shade trees such as Fremont cottonwoods and willows. More determined hikers with an interest in solitude, Cahuilla culture, and outstanding views will enjoy going further to Cactus Spring. Given these two options, it’s really up to you how much you want to tackle with this route. Even more dedicated hikers can continue beyond to make an attempt on Martinez Mountain (more on that later). 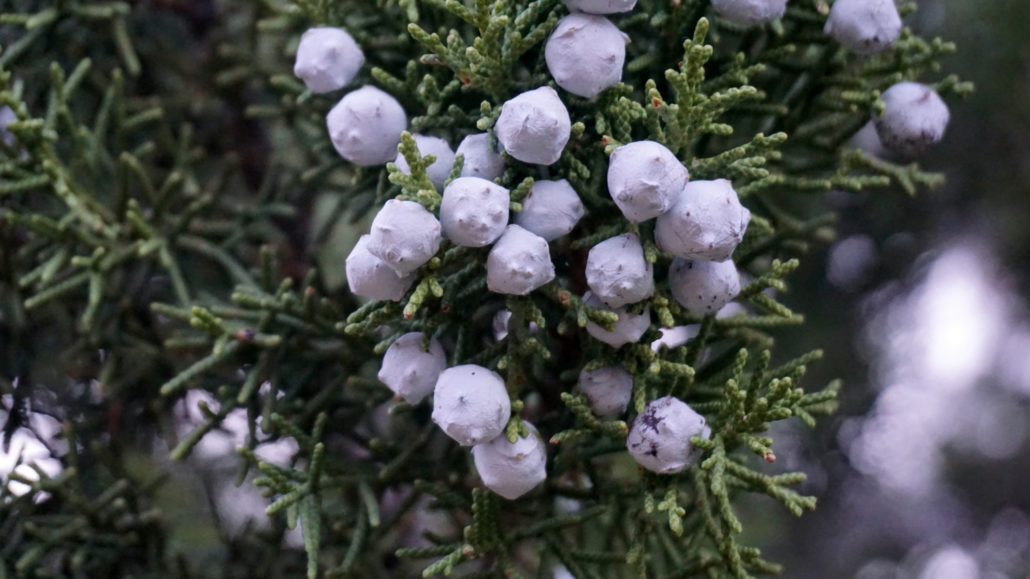 From the Sawmill Trailhead parking area, head east on a dirt road for 0.2 miles, and then make a right turn on another dirt road. Take an immediate left onto the signed Cactus Spring Trail (really the remnant of an old mining road at this point), and follow it on a moderate descent through an appealing mixture of high desert flora and montane chaparral. Pinyon pines and juniper are abundant on this route, and they mix in with chaparral plants including ribbonwood, manzanita, buckwheat, scrub oak, and sugar bush. The road briefly dips into a shallow section of Deep Canyon before passing some abandoned mining equipment that once served a handful of old dolomite mines. You’ll know dolomite by the white rock littering the ground, as well as the cone-shaped, gleaming white hill where the mining occurred. 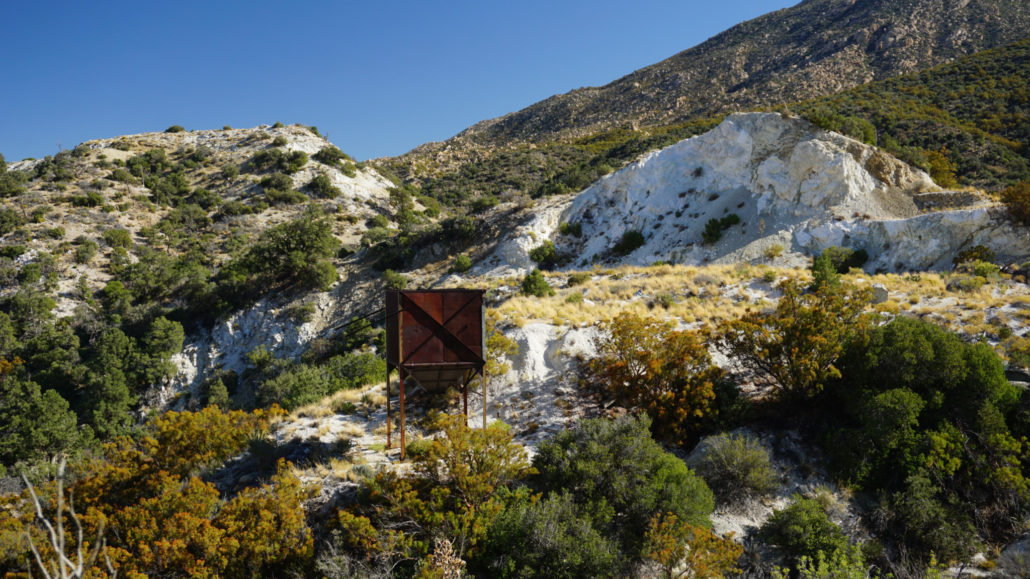 Just beyond the mines, stay straight at a junction with a dirt road leading away on the right and continue on as the formerly wide road becomes a single track trail. Here begins the rollercoaster as the trails drops into not one but three different drainages before reaching Horsethief Creek. The second of these three drainages may also feature water, which is forever a welcome site in the desert. Each up and down brings you a little lower toward the route’s lowest point at Horsethief Creek until you eventually end up 600 feet lower than the trailhead. The true amount of elevation loss is closer to 900′ owing to the numerous points where you gain more elevation climbing out of a drainage only to lose it tragically once again. Keep all of this in mind for your return journey. The 2.3 mile climb out of Horsethief Creek to the trailhead is fairly grueling, and you’ll want to keep a decent amount in the tank. 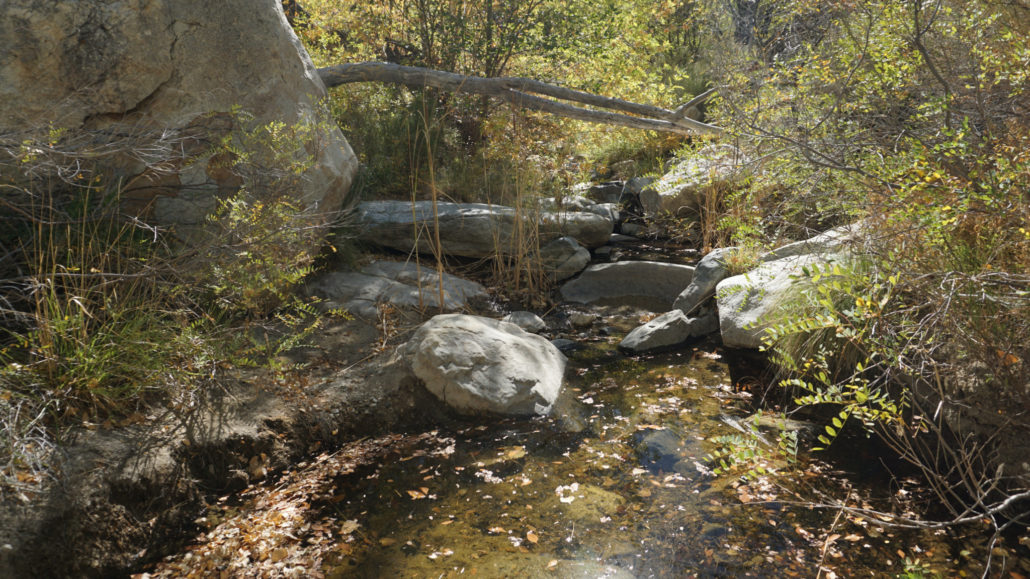 At 2.3 miles, the up-and-down comes to a merciful end with a gorgeous riparian gallery forest of cottonwoods and willow shading the quiet trickle of Horsethief Creek. Fed by springs upstream, the creek flows year-round to provide an important watering source. In fact, this is probably the one reliable water source on the route, so if you are backpacking you will want to tank up here. On the east bank of the creek just before the trail sign indicating the continuation of the route, make your way through a faint informal path to a beautiful, shaded slope just above the creek. This beguiling, tranquil spot is worth the visit alone, and you may find yourself reluctant to move along once you take a load off. 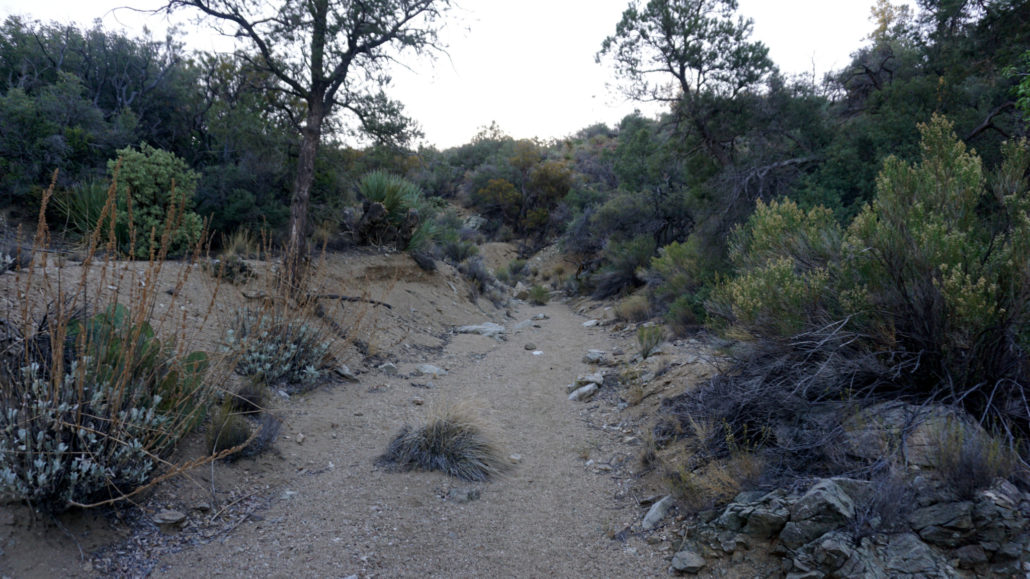 If you wish to continue to Cactus Spring, follow the continuation of the trail on the east bank of the creek as it kicks into full-on climbing mode while following a ridge dividing Horsethief Creek from a second drainage to the north. This steep, no-nonsense climb brings you to the western slopes of Little Pinyon Flat before depositing you in a wash that will double as the trail for the next 0.6 mile. The wash is a lovely bit of walking accompanied by a nice mix of desert foliage dominated by the occasional shade of pinyon pines. 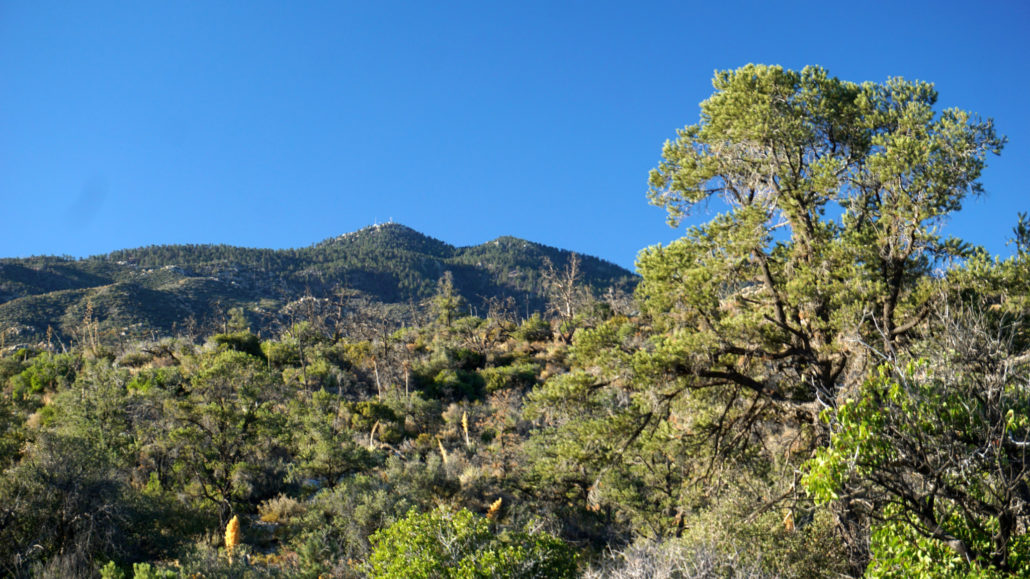 When the trail leaves the wash at 3.3 miles, your face the trickiest section of navigation on the route as the old path becomes more and more vague. Occasional signs will point the way, but not as often as you might like nor at the times where they seem crucial. You will need to pay attention, especially on the way back, to make sure you don’t inadvertently cross over into one of several small washes intersecting the path at right or oblique angles. Careful attention should be sufficient, but you can also keep your eyes on a low escarpment just to your north. You’re paralleling this feature at a distance of about 0.25 mile. 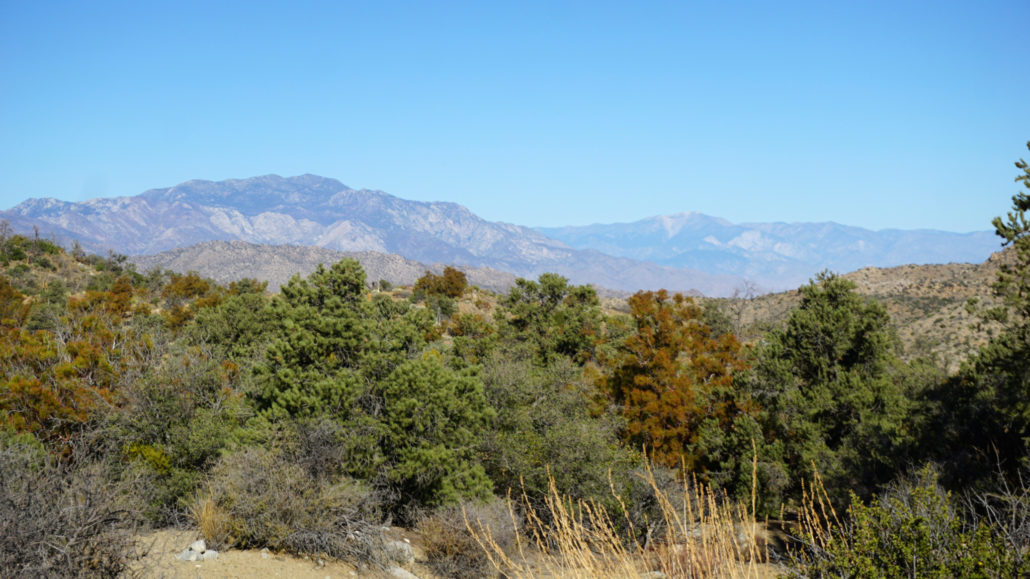 As attentive as you will need to be, do make sure to stop and enjoy the magnificent views to the east, south, and west. The high country of the Santa Rosa Crest, dominated by Toro Peak, attracts the most notice as it tower over 4,000′ above the valley of Little Pinyon Flat. To the east, Martinez Mountain’s rumpled block grows closer and closer to beckon hikers with a healthy dose of masochism. Look behind you from time to time to watch impressive views of the San Jacinto Mountain range with San Gorgonio poking its head into the frame to say howdy. 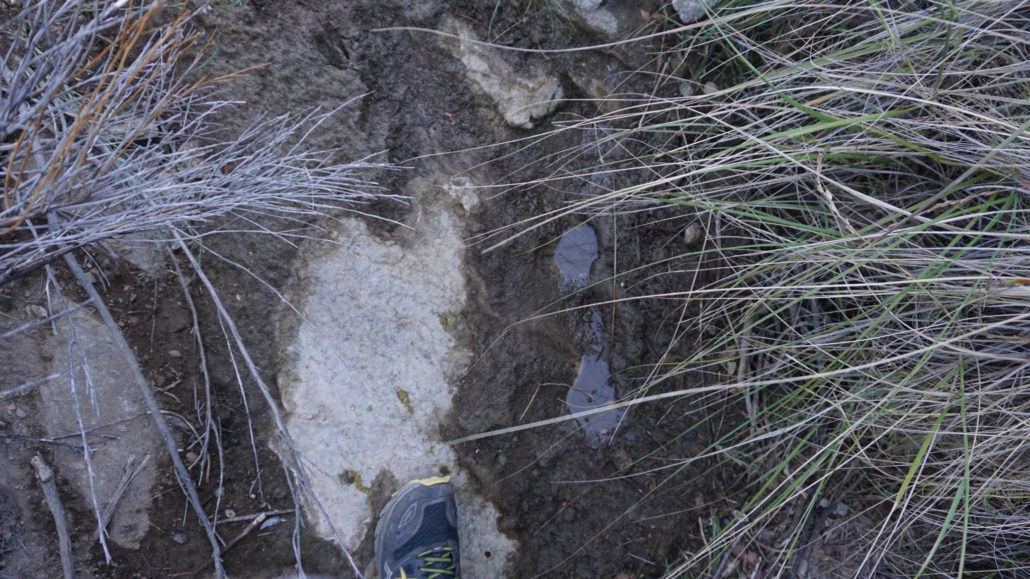 Cactus Spring and this author’s foot

Cactus Spring isn’t the easiest landmark to find, nor quite frankly is it the most impressive. The trail comes to a wide, sandy wash marked by a post. Turn left into this wash and follow it until it narrows and becomes overgrown with grass. The spring lies in a rocky bend in the wash. Once a reliable source of water with a healthy flow, years of changing climate and occasional blockage by runoff has rendered the spring a muddy patch of earth surrounded by deer grass. You might see a few small puddles here and there, but there will hardly be enough to fill your nalgene with. While this was once a key water supply for the village that once stood here, today is serves as a water supply for the local wildlife. In deference to their needs, be sure to camp a few hundreds yards from the spring if you’re planning on setting up shop for the night. 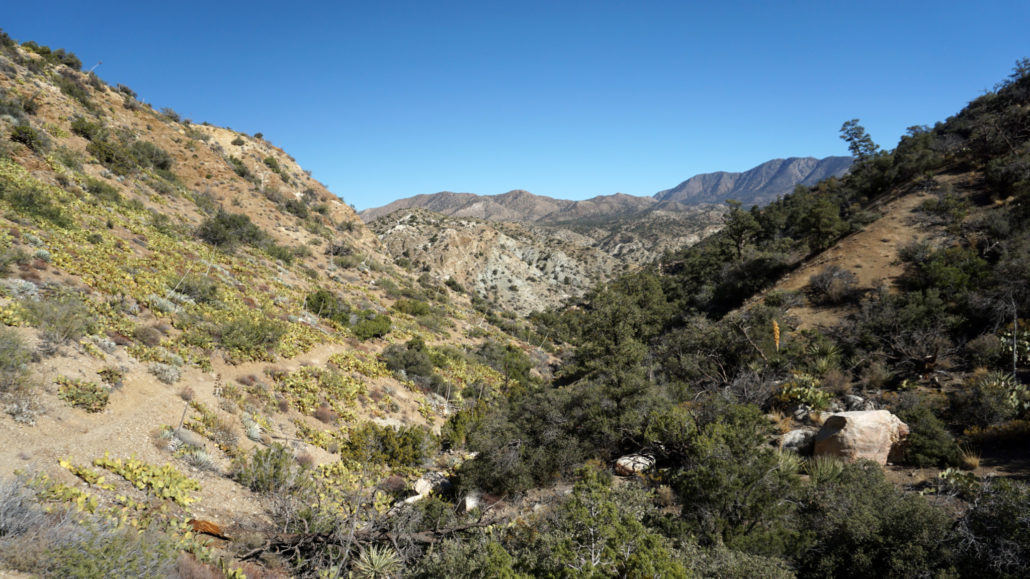 As mentioned, this spring once supplied a village with its drinking water needs. As is the case with all such sites, there’s a possibility that you may encounter artifacts from the village, including morteros, pictographs, wide polished rocks that served as dancing floors, and potsherds. The required etiquette for cultural sites is to look but not touch. Even moving a potsherd after picking it up to get a look at it can alter the site, which is both an archaelogical record and the cultural heritage of a people who are still very much present and involved in the area. Out of respect, always exercise great care around any cultural artifacts. 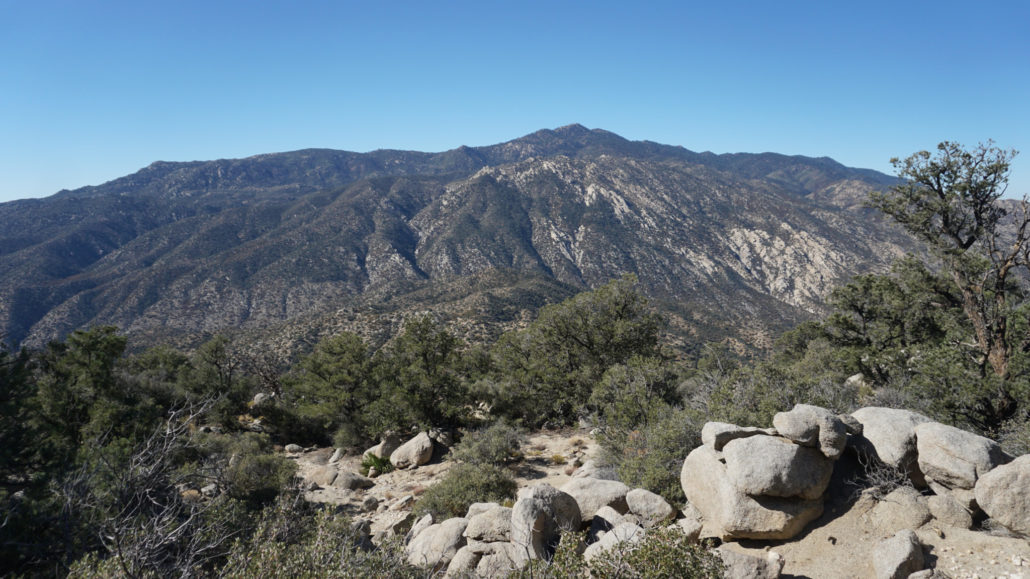 Toro Peak from about halfway up Martinez Mountain

Finally, if the prospect of summiting Martinez Mountain proves tantalizing, know that you can expect a roundtrip hike upwards of 16 miles and 4,500′ of elevation gain. The route beyond Cactus Spring becomes even more overgrown and difficult to follow with a number of crucial turns marked by unobtrusive cairns. I’m an accomplished cross-country navigator, and even I wasted nearly an hour trying to pick up old threads of the path. The ascent of Martinez Mountain is a grueling slog over 2,000′ per mile slopes where you will be obligated to hopscotch over extensive boulder fields punctuated by impenetrable vegetation. I must admit that I crapped out about 0.5 mile from the top. If you are going to attempt the mountain, you are better off camping near Cactus Spring so as to allow yourself sufficient time to summit. 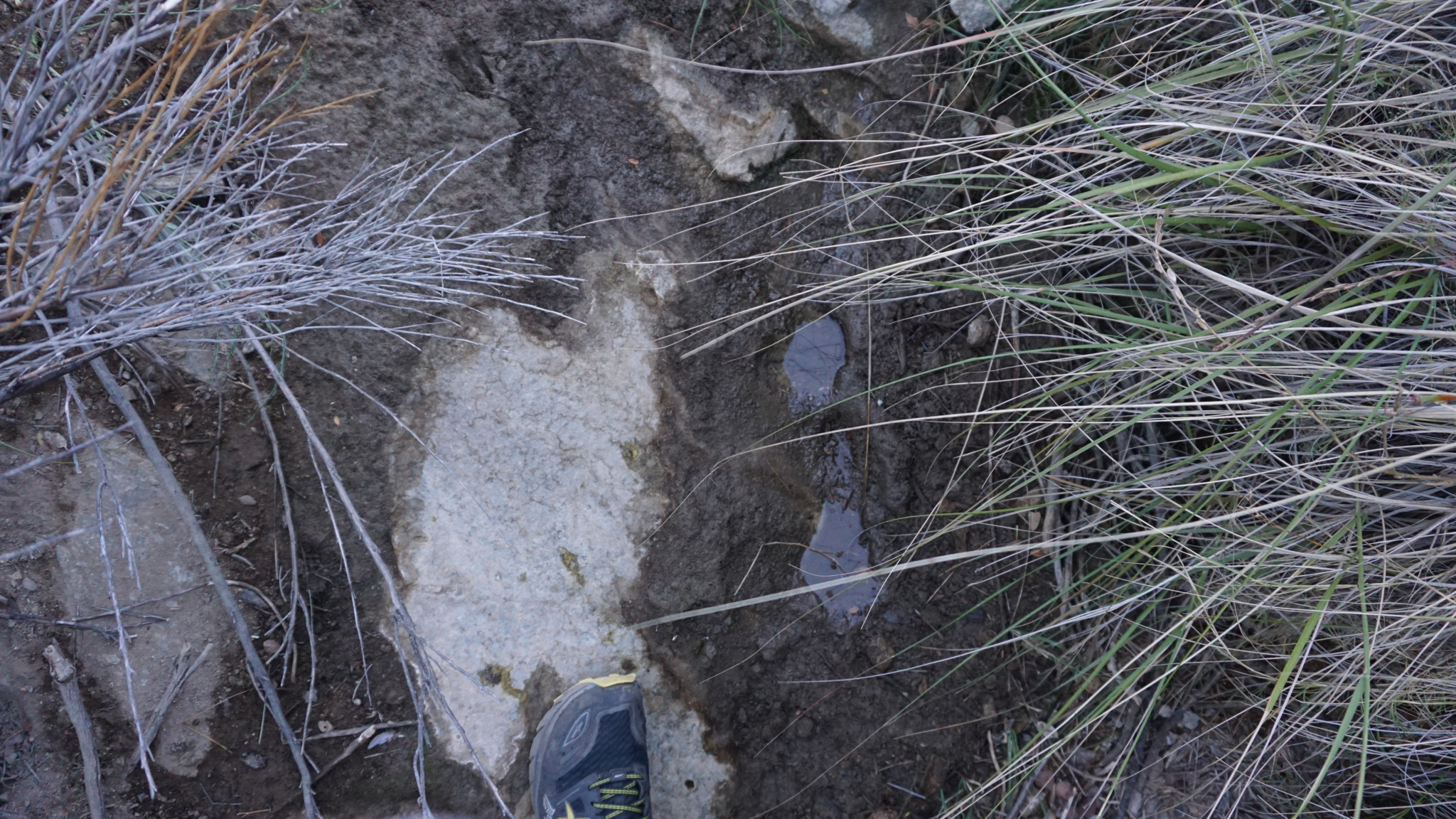 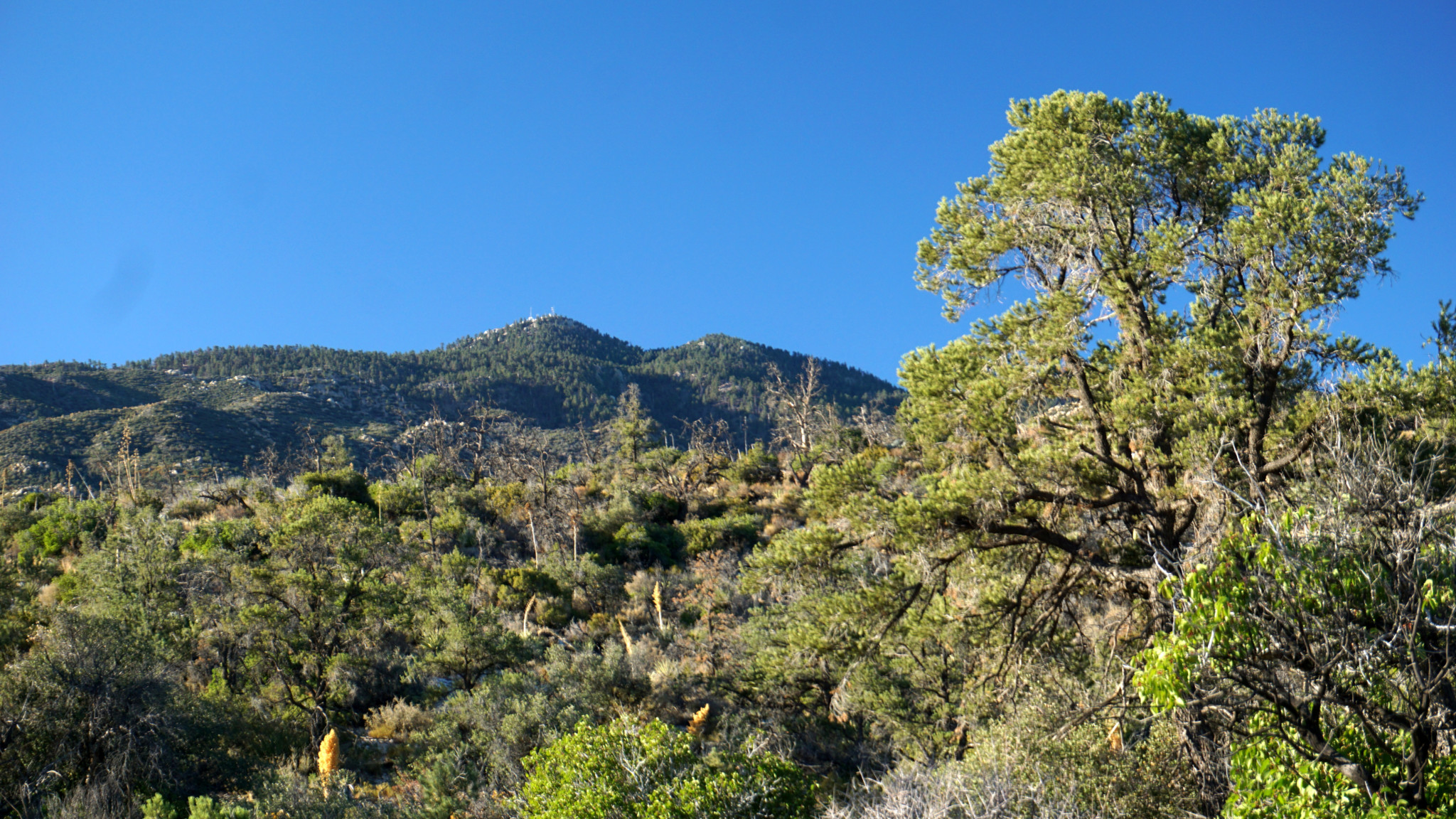 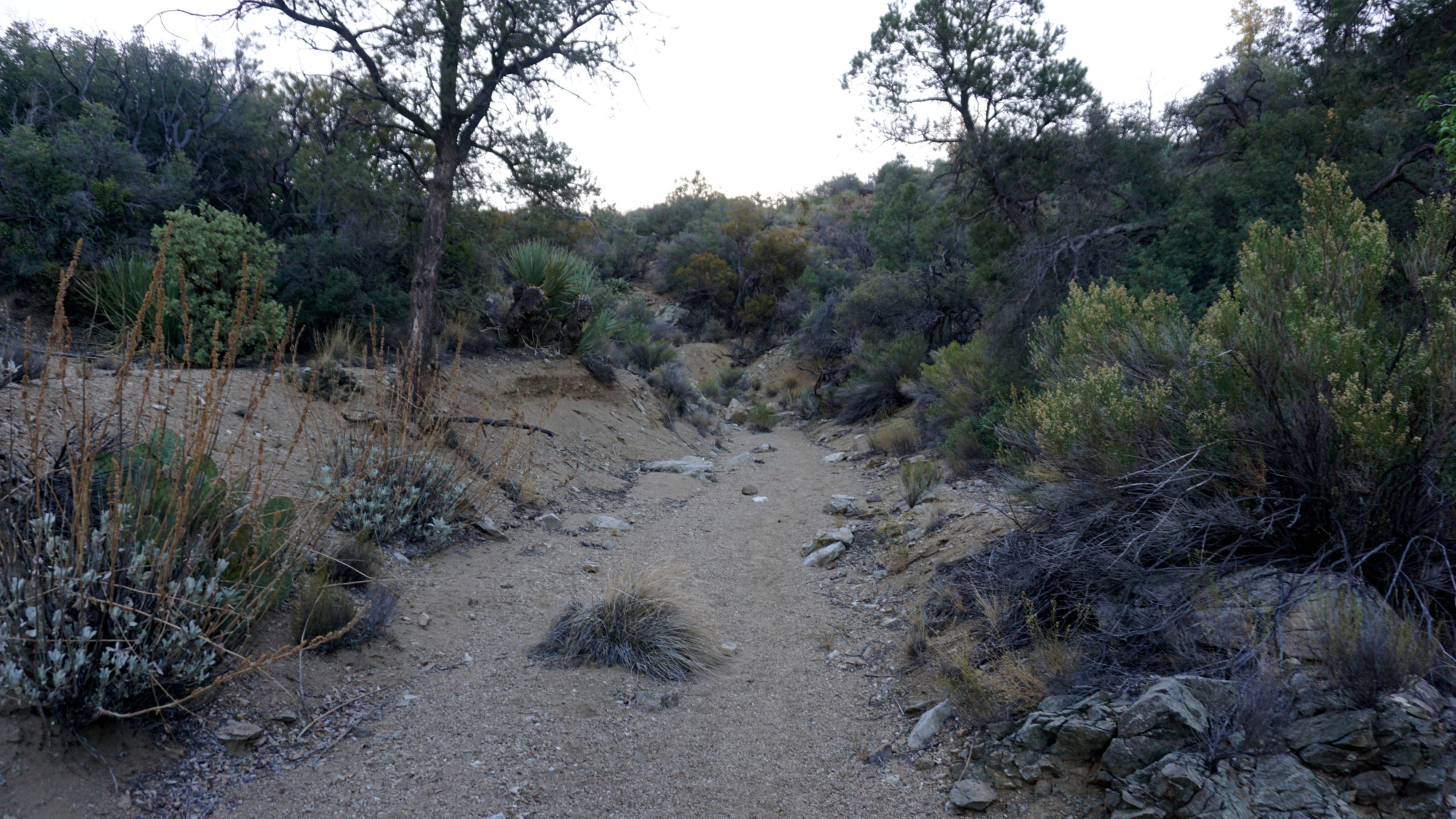 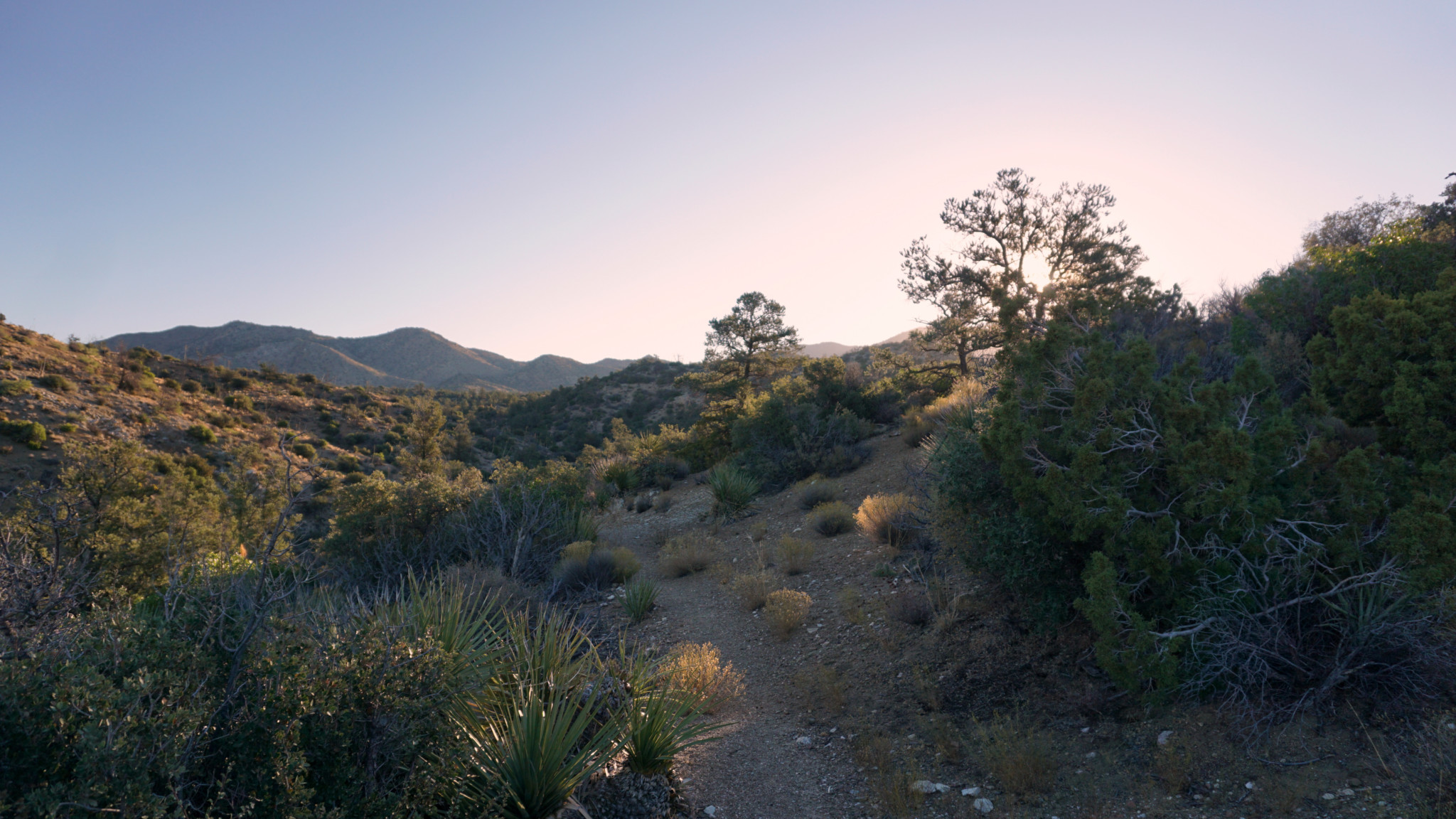 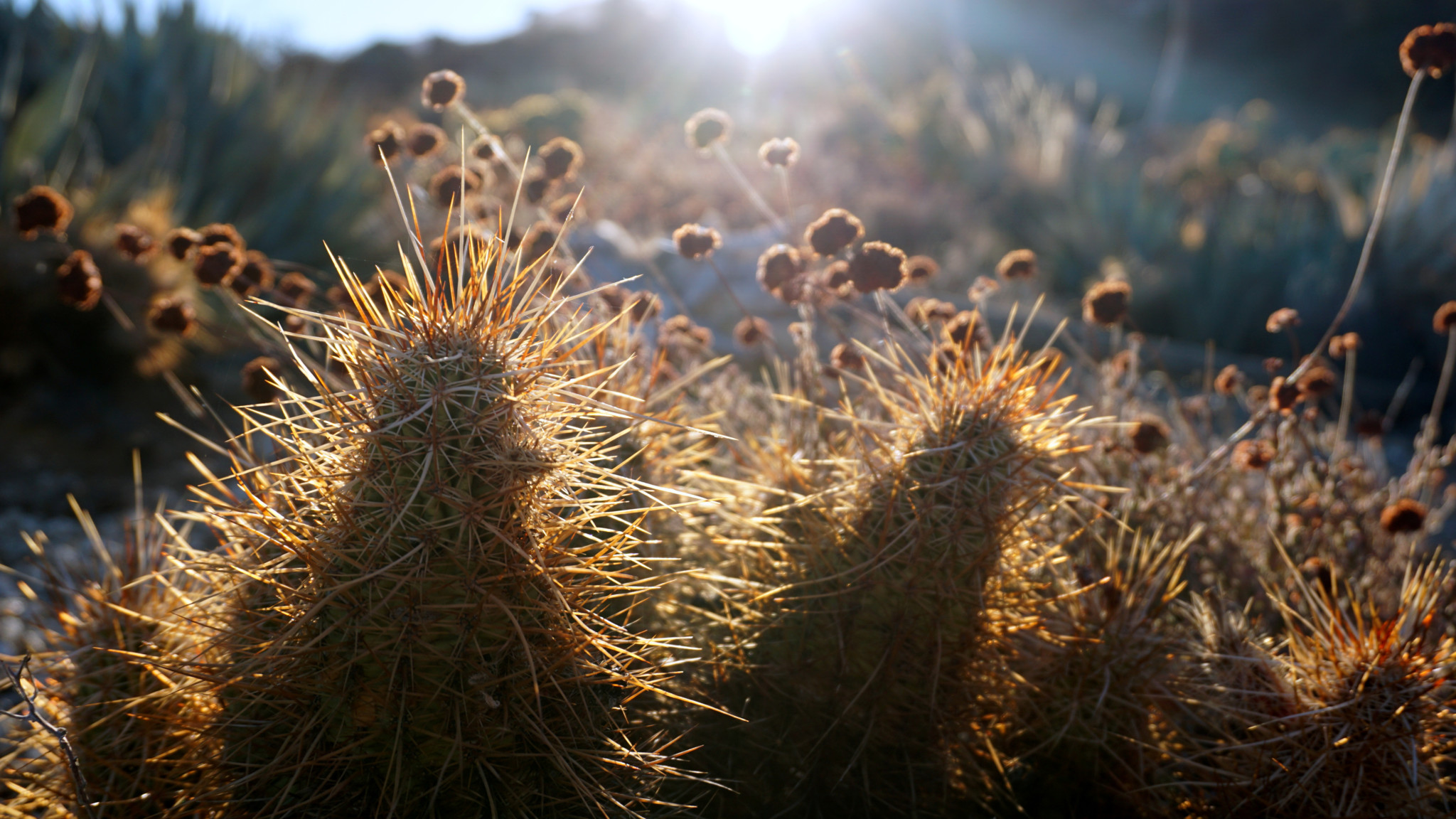 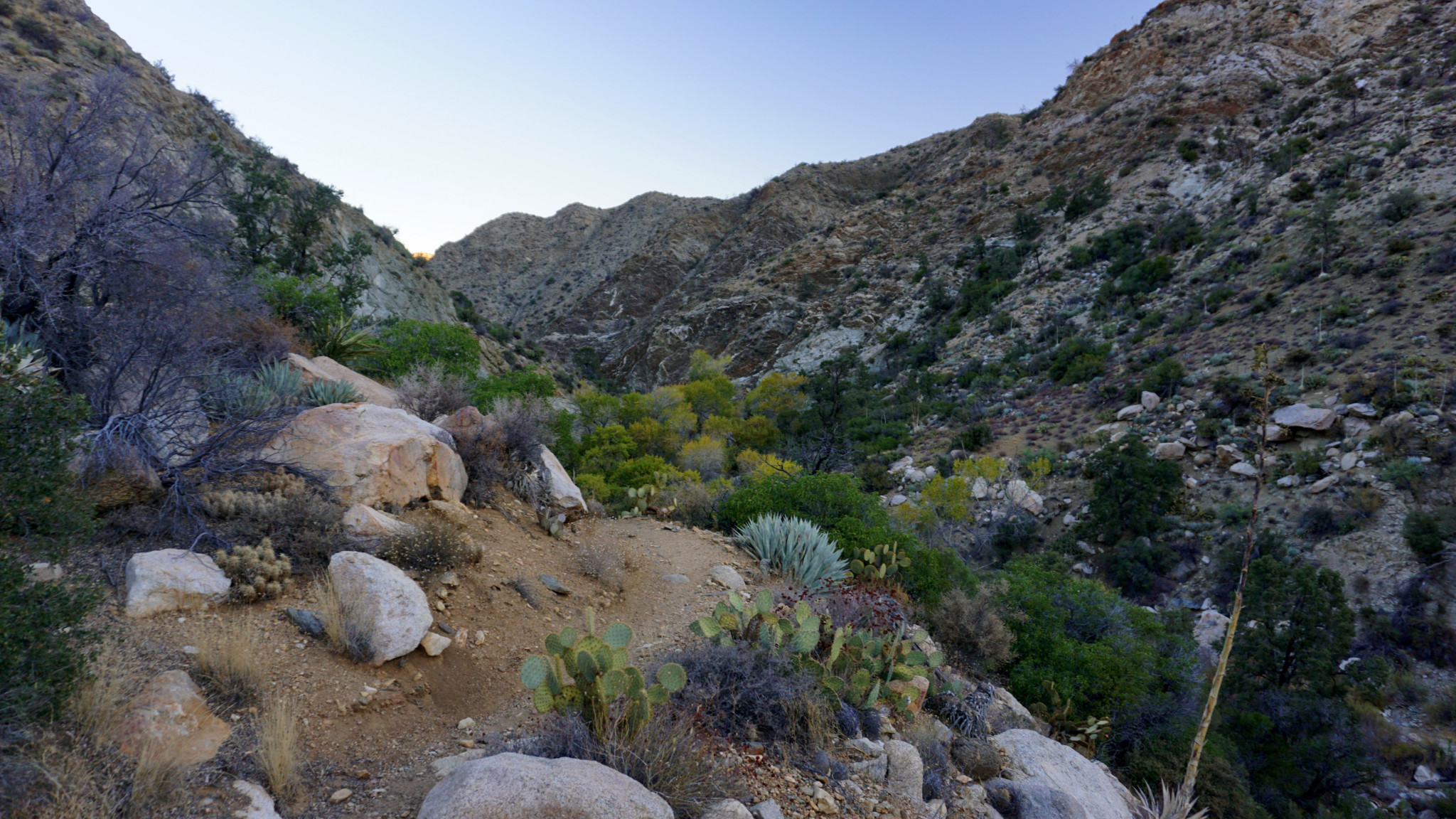 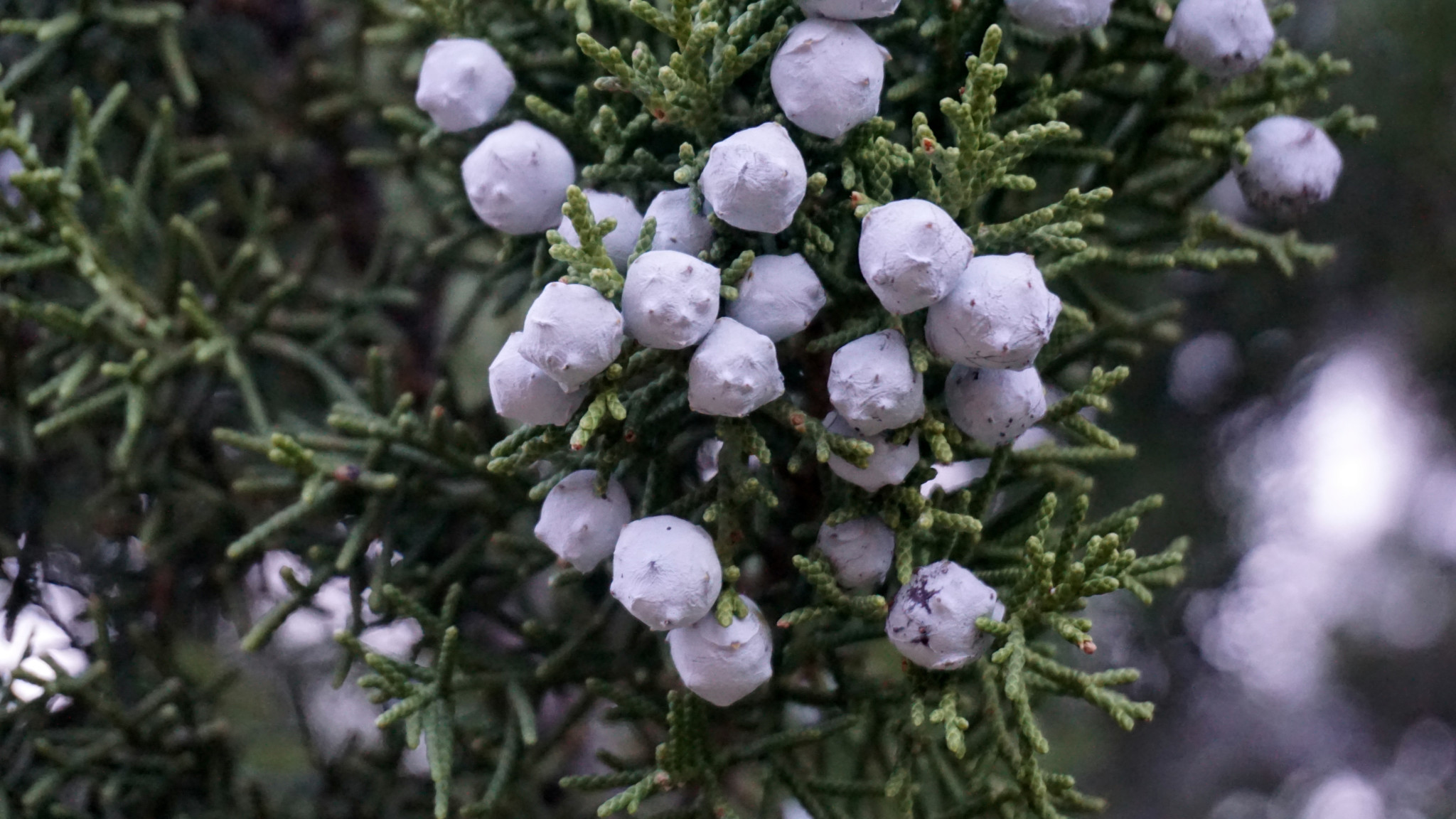 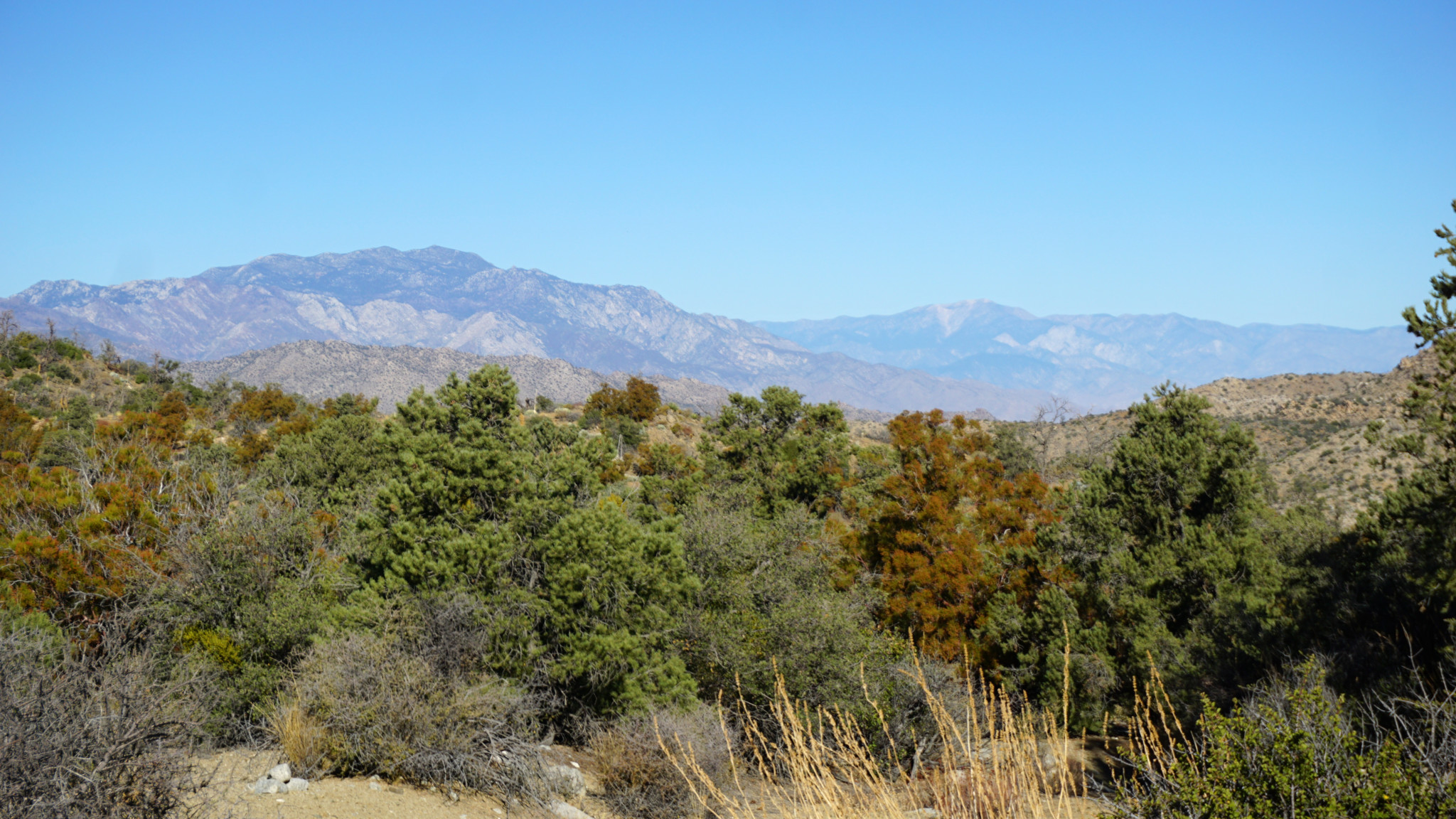 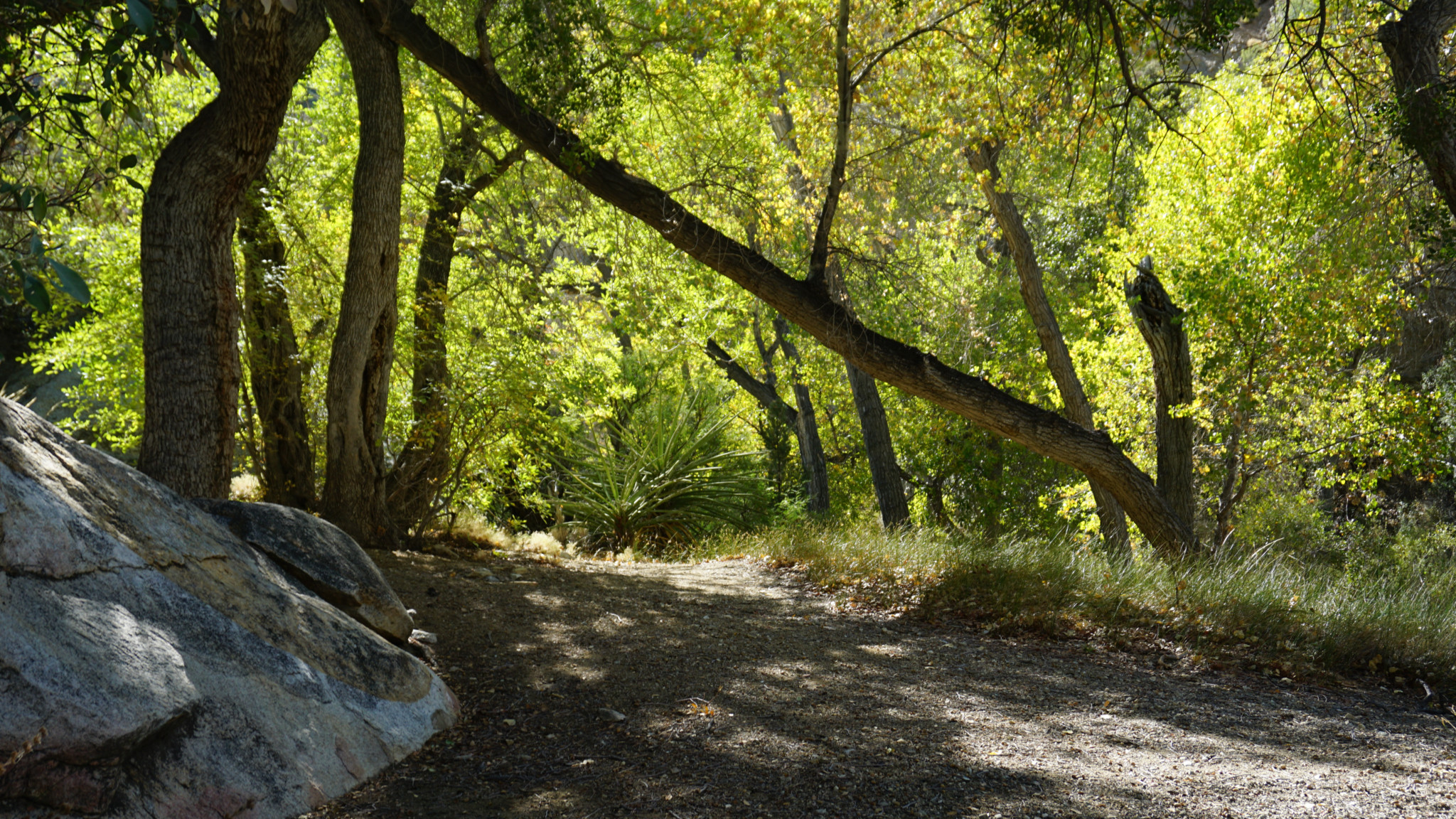 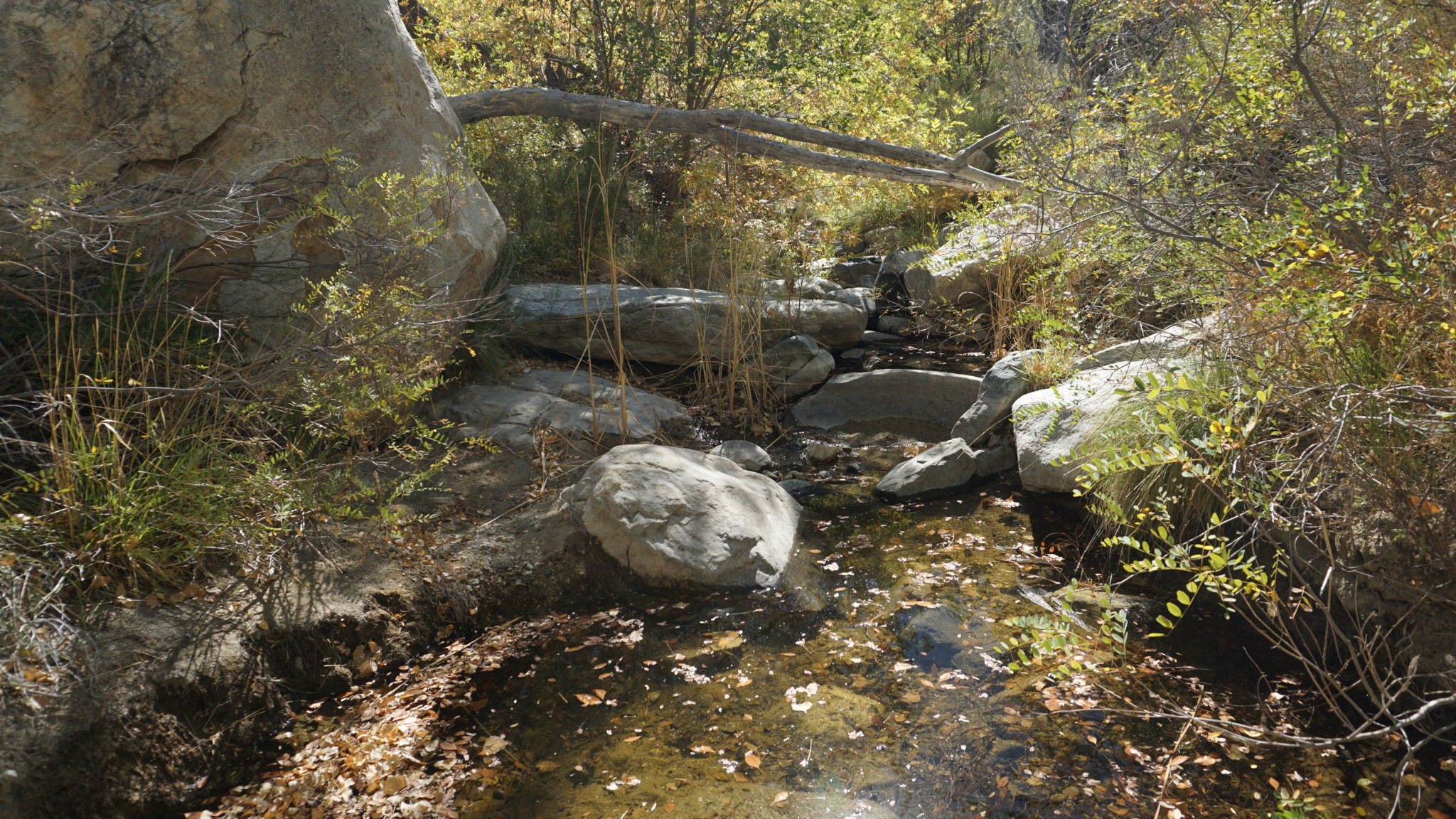 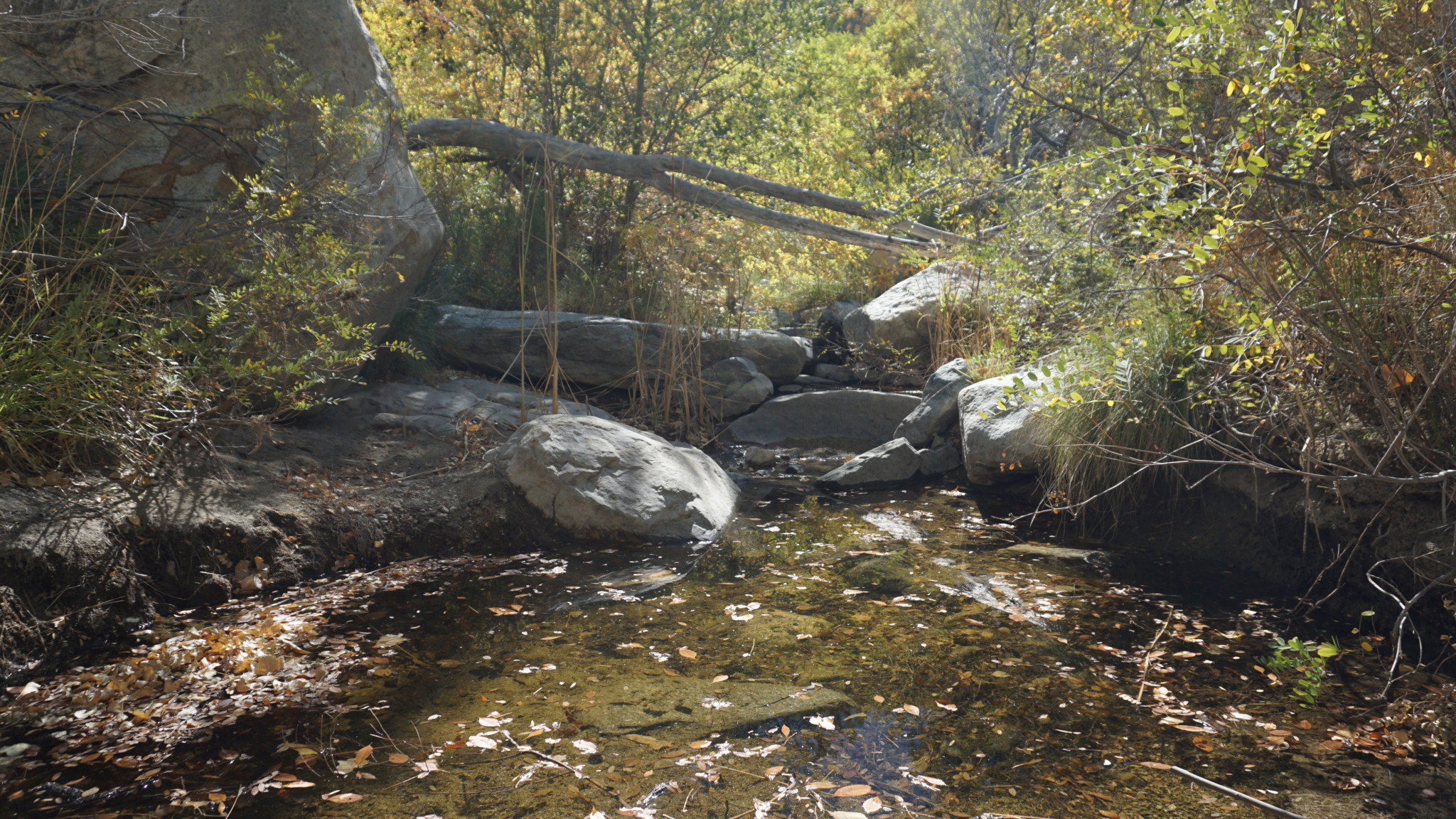 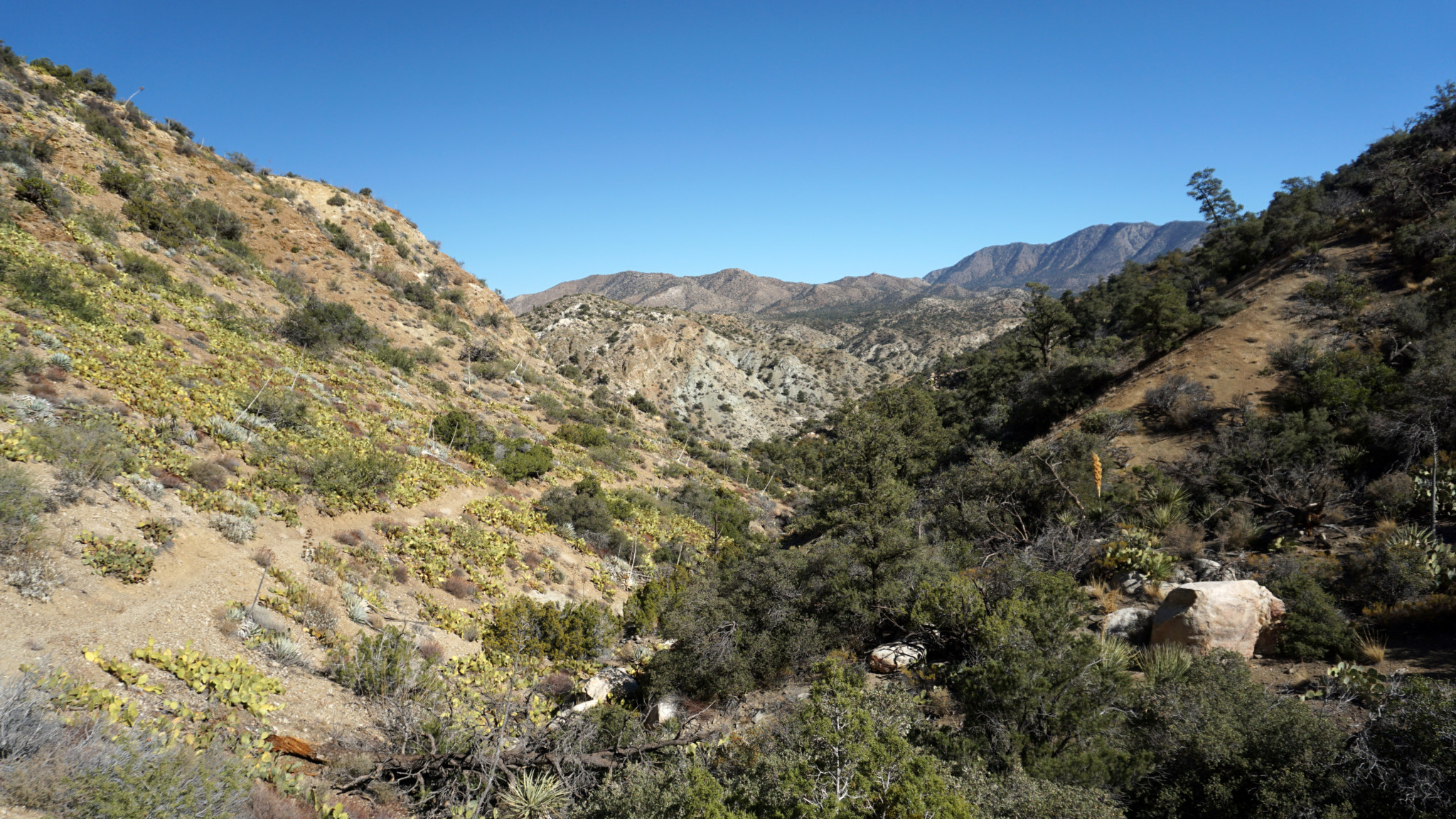 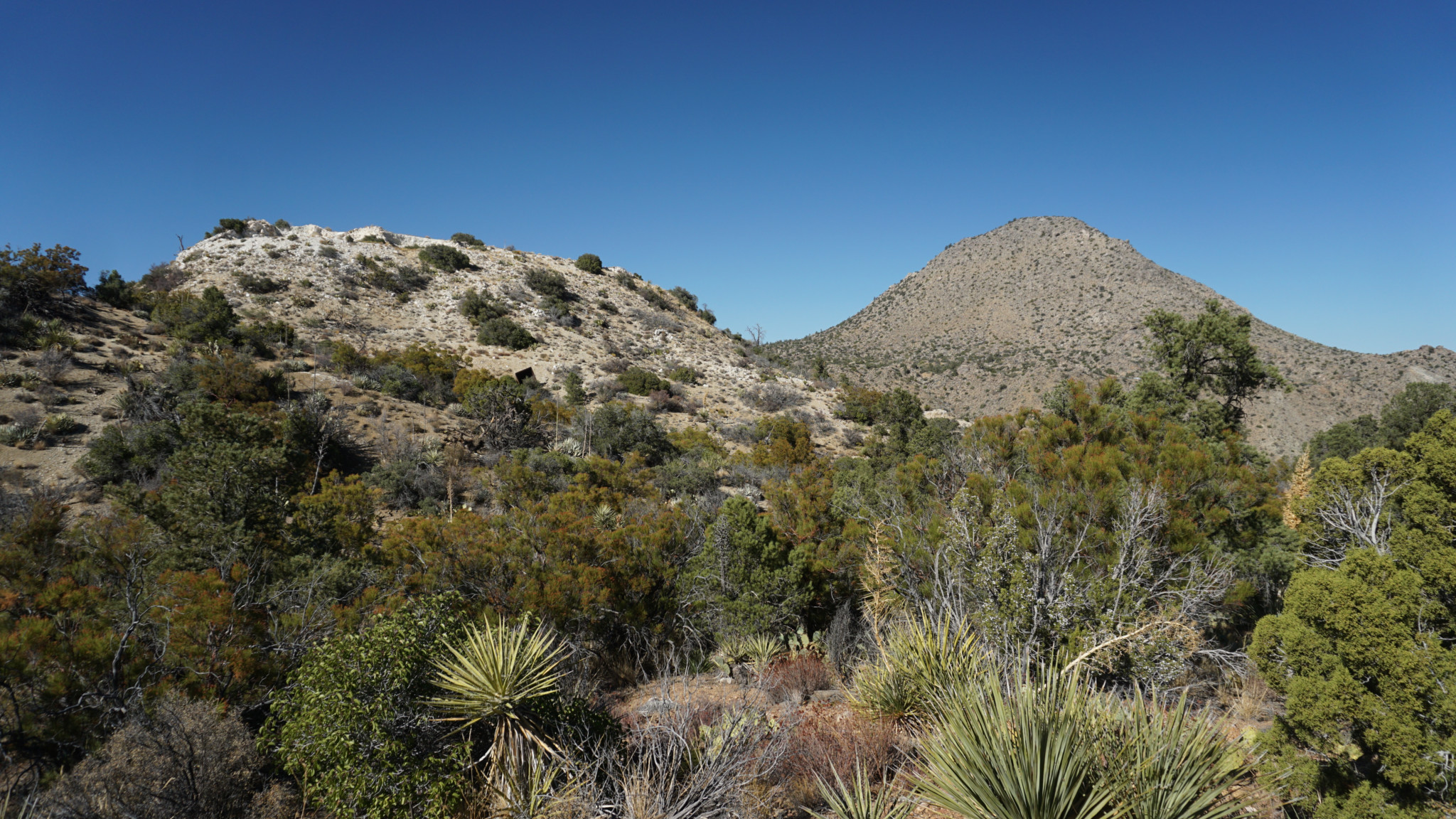 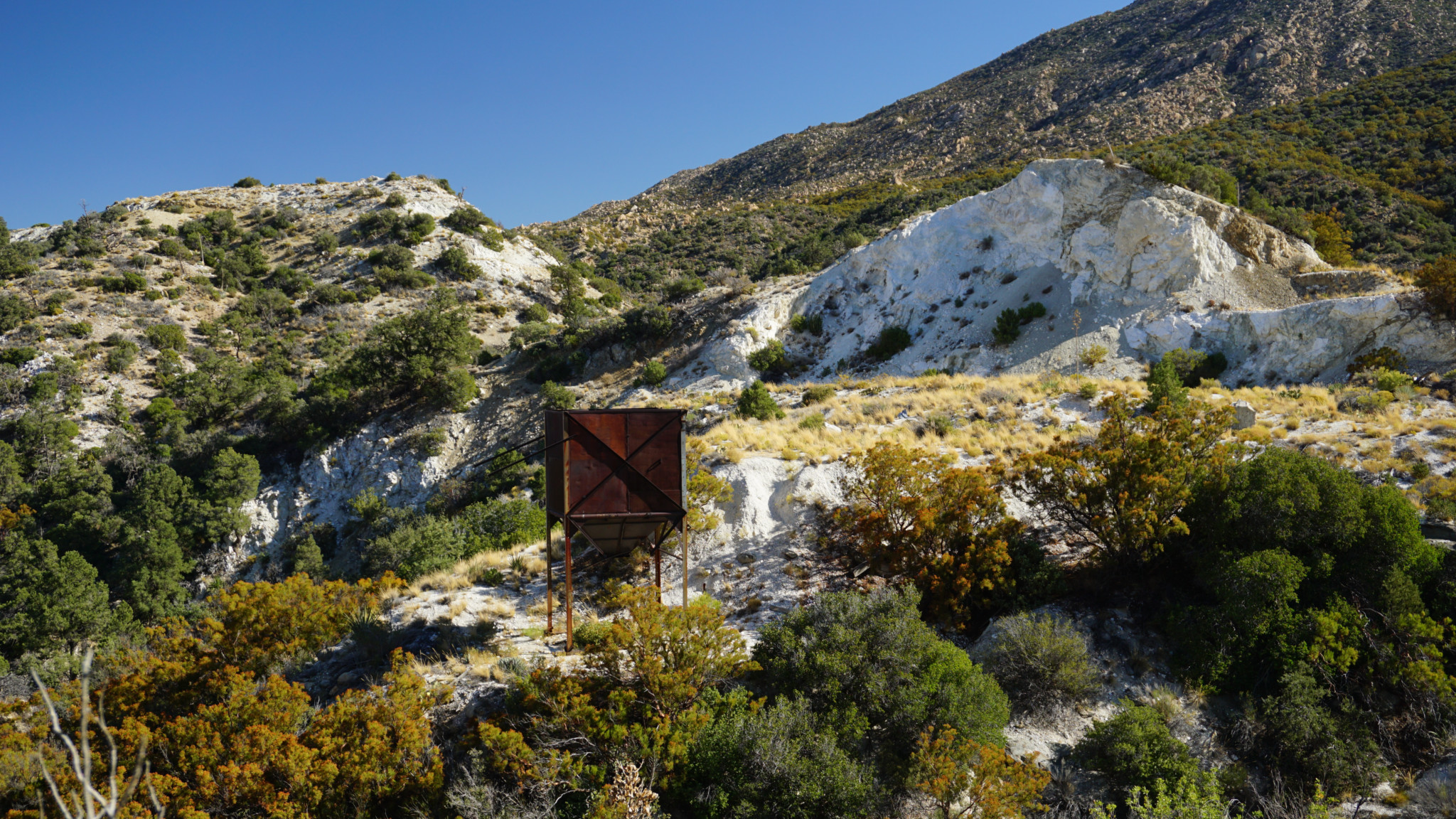 The trail starts out strong and then gradually peters out into a sometimes hard to follow path that requires a good deal of your attention. One segment of the trail occurs within a smooth, sandy wash.

Pinyon Flat Campground across Highway 74 is your nearest camping option.

From I-10 in Palm Springs/Palm Desert, exit onto Monterey Avenue and head south toward Palm Desert. After 5.8 miles, Monterey Avenue becomes Highway 74. Continue on 74 for another 15.5 miles to a junction with Pinyon Flats Transfer Station Road, and turn left. Turn left into the signed Sawmill Trailhead parking area.