Hole in the Rock

The Hole in the Rock is a fun trail and especially good for beginner hikers, younger kids and people just exploring the Phoenix area. This trail is extremely easy and short. If you are able to walk up a few flight of stairs then you ready for the Hole in the Rock!

This path is located in Papago Park, which houses uniquely formed buttes made out of sandstone. The buttes are reddish in color and from close up look very porous, almost like a dried out sponge. They have unique shapes and while steep, they’re also very round. It doesn’t look like what you would expect to find in the Phoenix desert but maybe instead see at the bottom of a tropical fish tank. 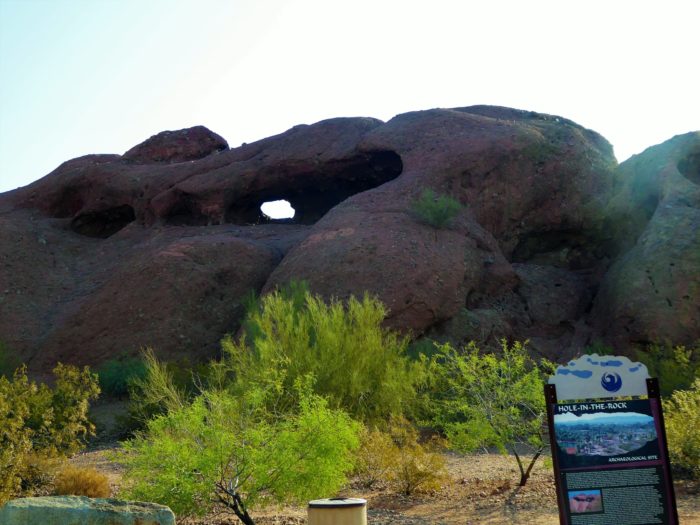 At the end of this short hike you will be standing in a hole inside one of these buttes overlooking the city. But, before we go onto this trail, let’s learn a quick bit of history surrounding this hole in the rock.

The early inhabitants of the Phoenix area known as the Hohokam Tribe used this hole in the rock as a calendar to mark the summer and winter solstice.  There are marked areas and boulders set inside where the sun hits at different times of the year, helping the tribe schedule their agricultural activities. Needless to say, this hole has been here for a long time seeing as how the Hohokam Tribe lived in the Valley from 450 to 1450 CE.

Alright, enough with the history lesson and now onto the main event! 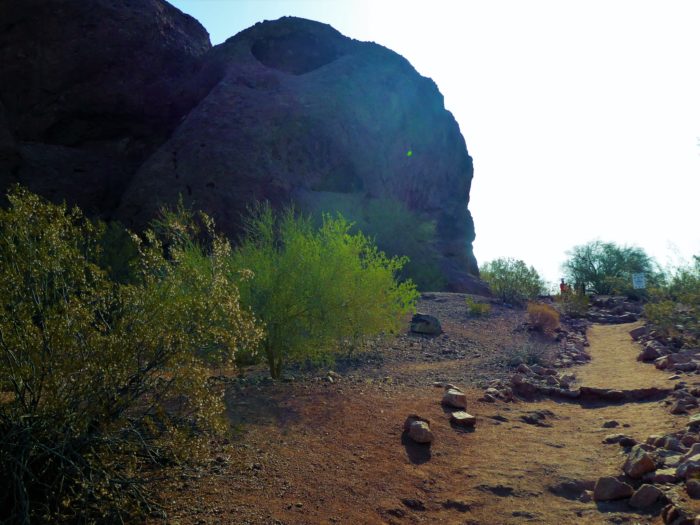 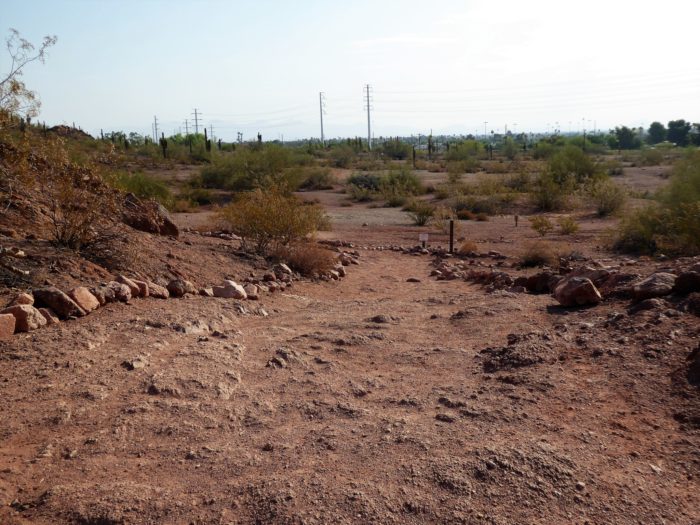 The path begins by looping around the rock and then heading toward the backside. This part is relatively flat. At the point where you have reached the back of the rock, you will notice that the trail shifts into man-made stairs leading the way to the rock. The path is very wide which allows for multiple people to be walking together or hikers to easily pass each other as well. As you are walking up you’ll notice another gap up near the very top of this butte that was not visible from the front. It is from this higher opening that the sunlight shines into the main hole in the rock that allowed the Hohokam tribe to track the solstices. 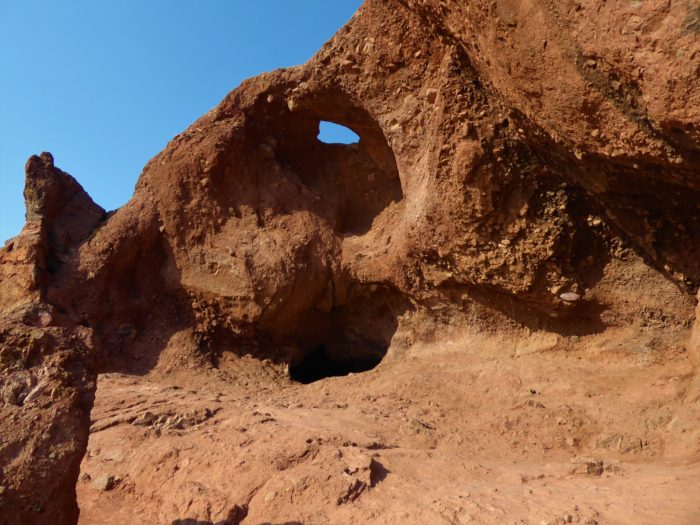 At first sight from far away this bigger hole may seem not as noticeable and tends to look like a cave opening. The closer you get you’ll discover that this is an opening where you can see through to the other side. 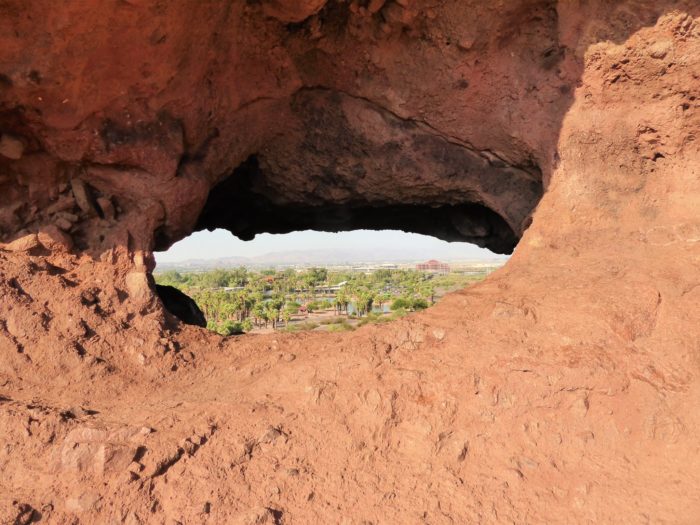 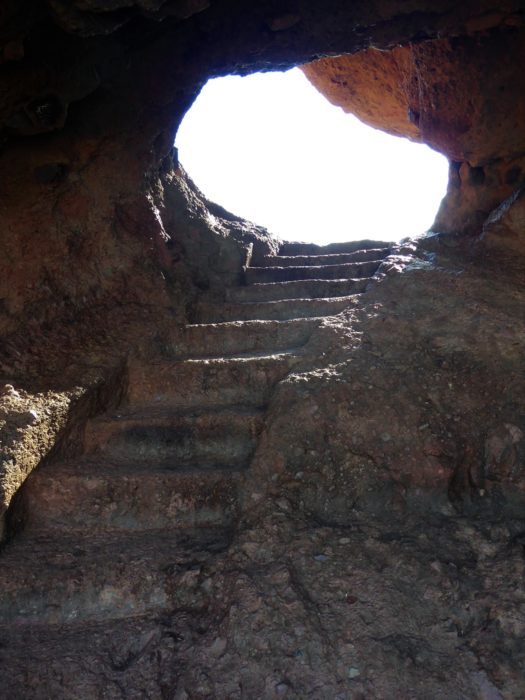 As you walk into it, there are more man-made steps carved out of the rock floor, towards the right leading you down further into the hole. From there you can pick a good spot in this hole to sit, relax and take in the view! 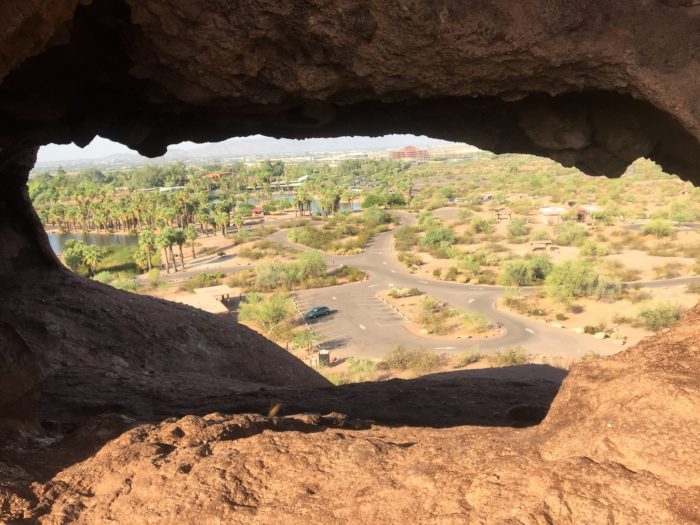 The Papago Park and the surrounding area used to be known as Papago Park Camp where the government built an army camp to train U.S. soldiers for desert combat. Later this camp was used to house prisoners of war, and during World War II housed German POW’s. The German prisoners planned an escape by digging a tunnel under the surrounding camp fence. Their plan was to escape by using a self-made kayak to float down the Gila River and eventually end up in Mexico. But when the prisoners had dug their way out they discovered the river had dried up (welcome to desert rivers!), therefore abandoning the plan of escaping by boat. At this point they disbursed on foot and separated from each other. While some snuck closer to Mexico than others, all escapees were eventually caught. This bold act went down in Arizona history and is known locally as the “Great Escape”.

Accommodations near Hole in the Rock 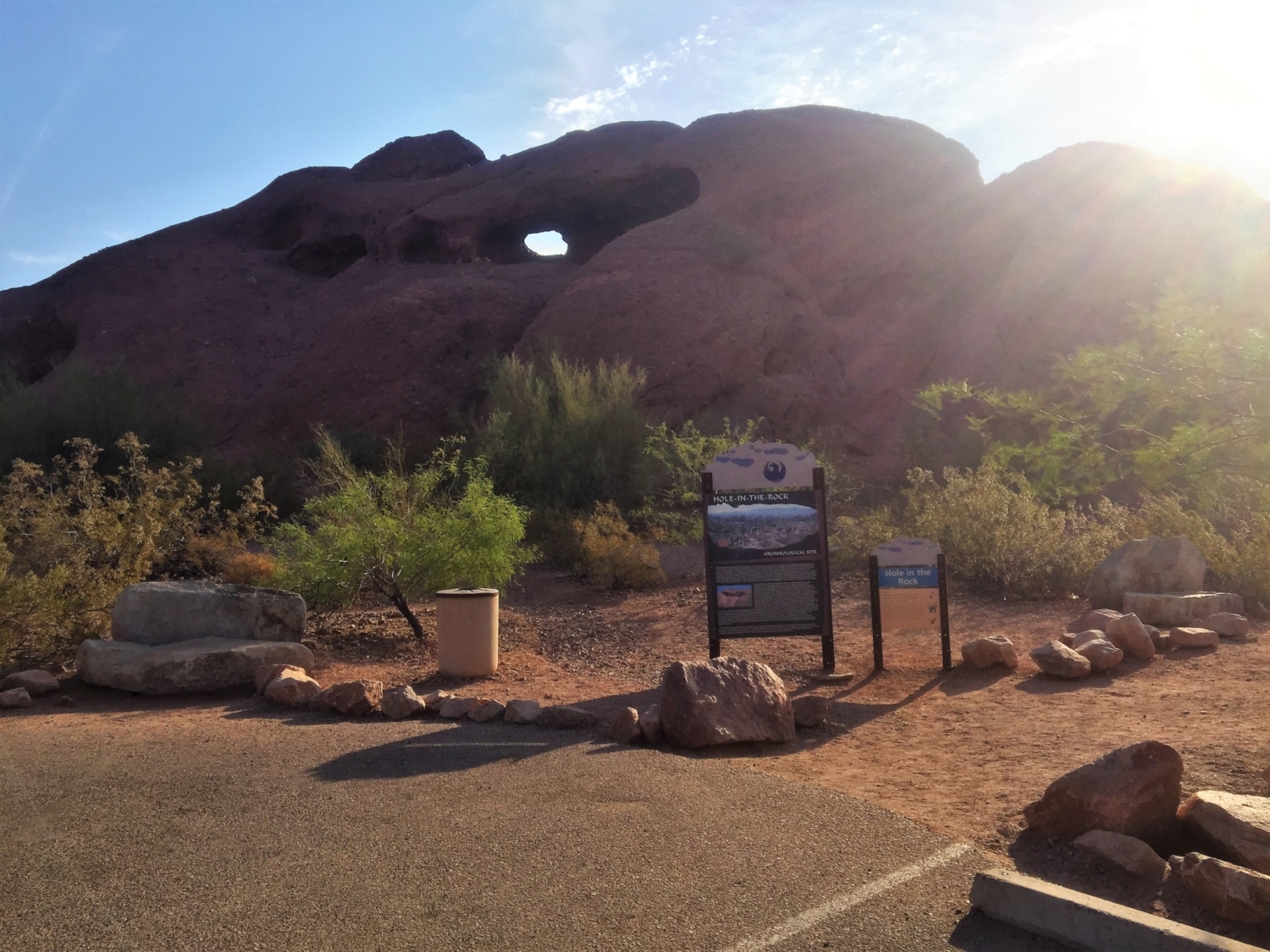 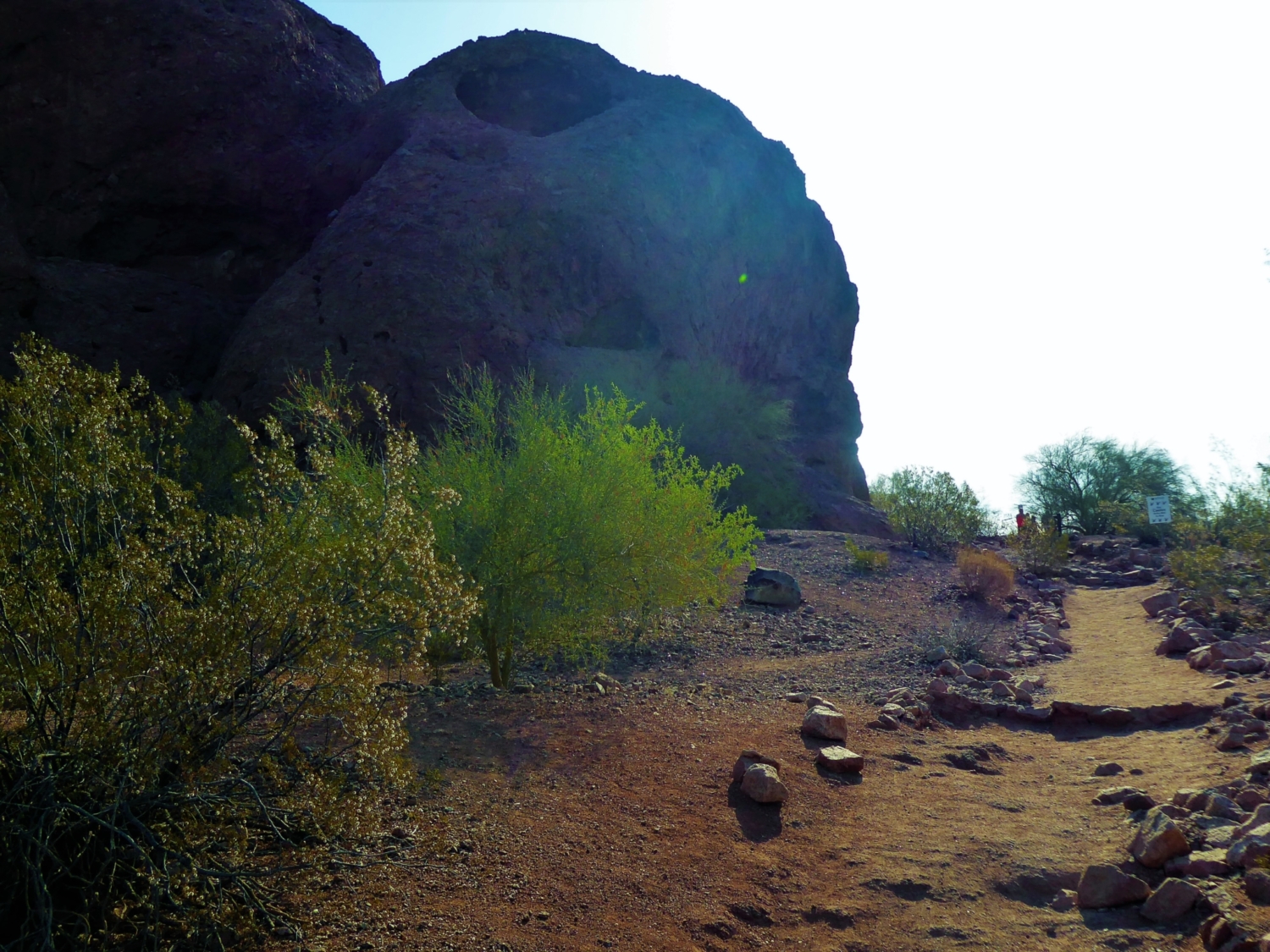 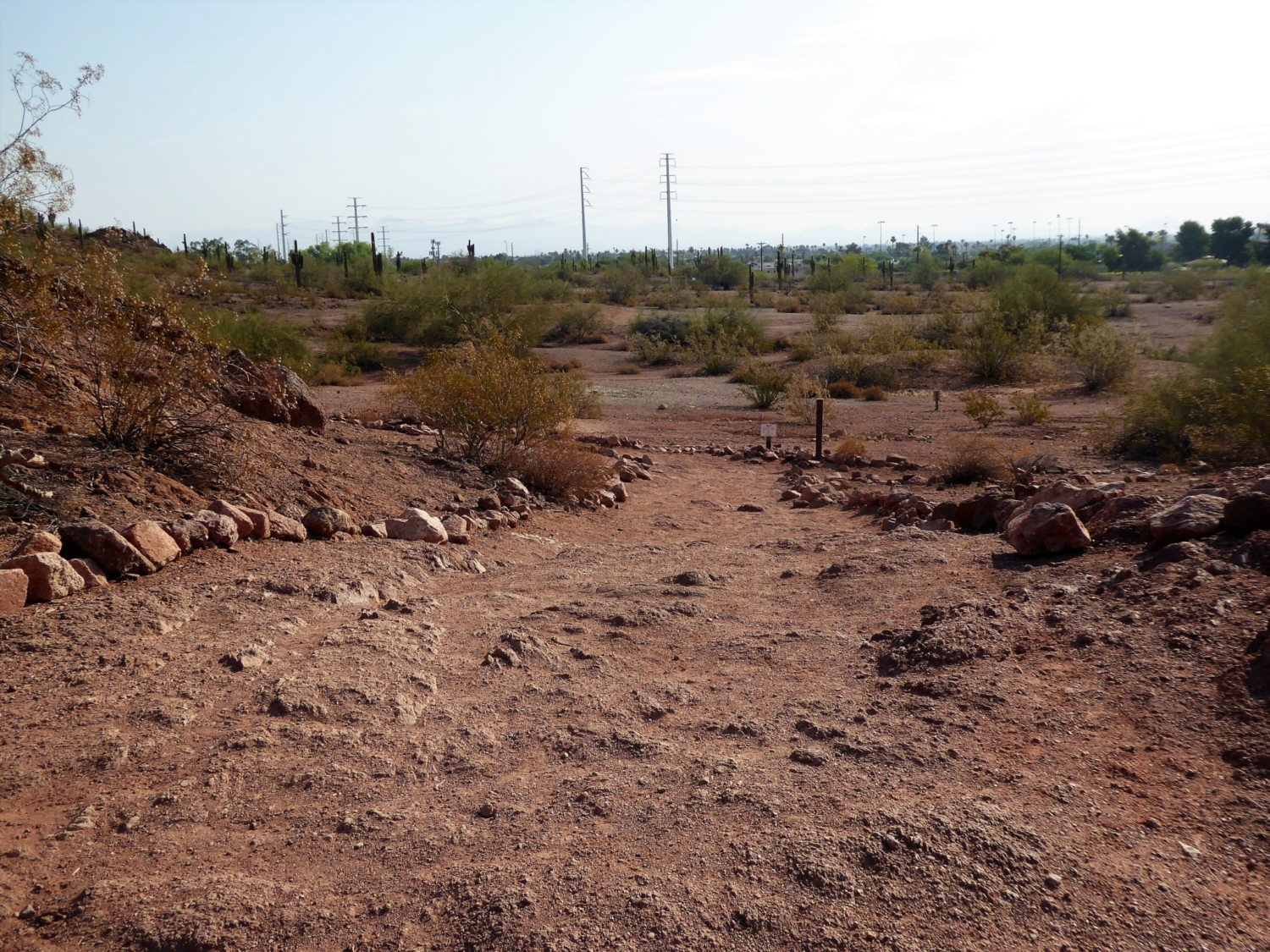 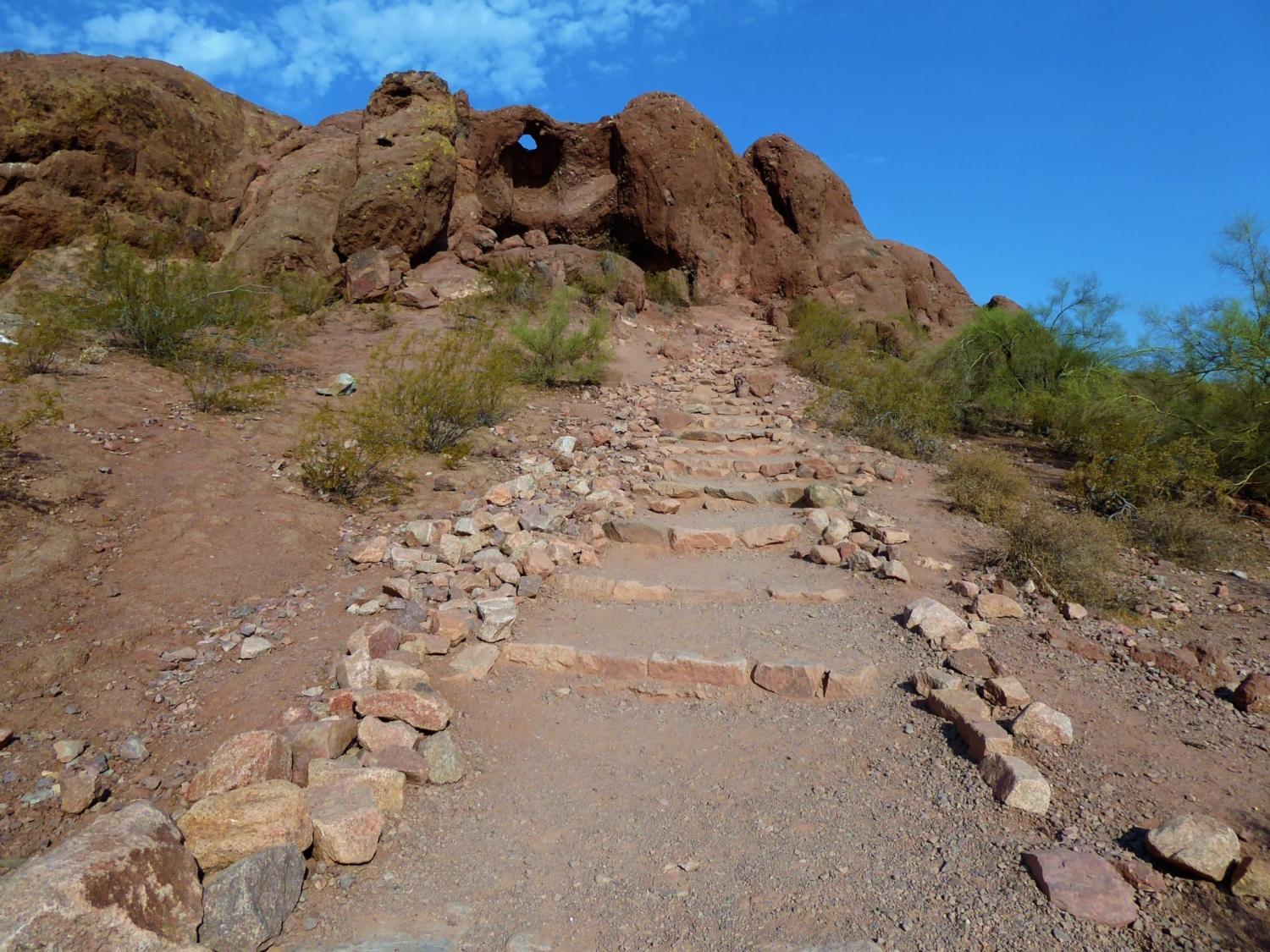 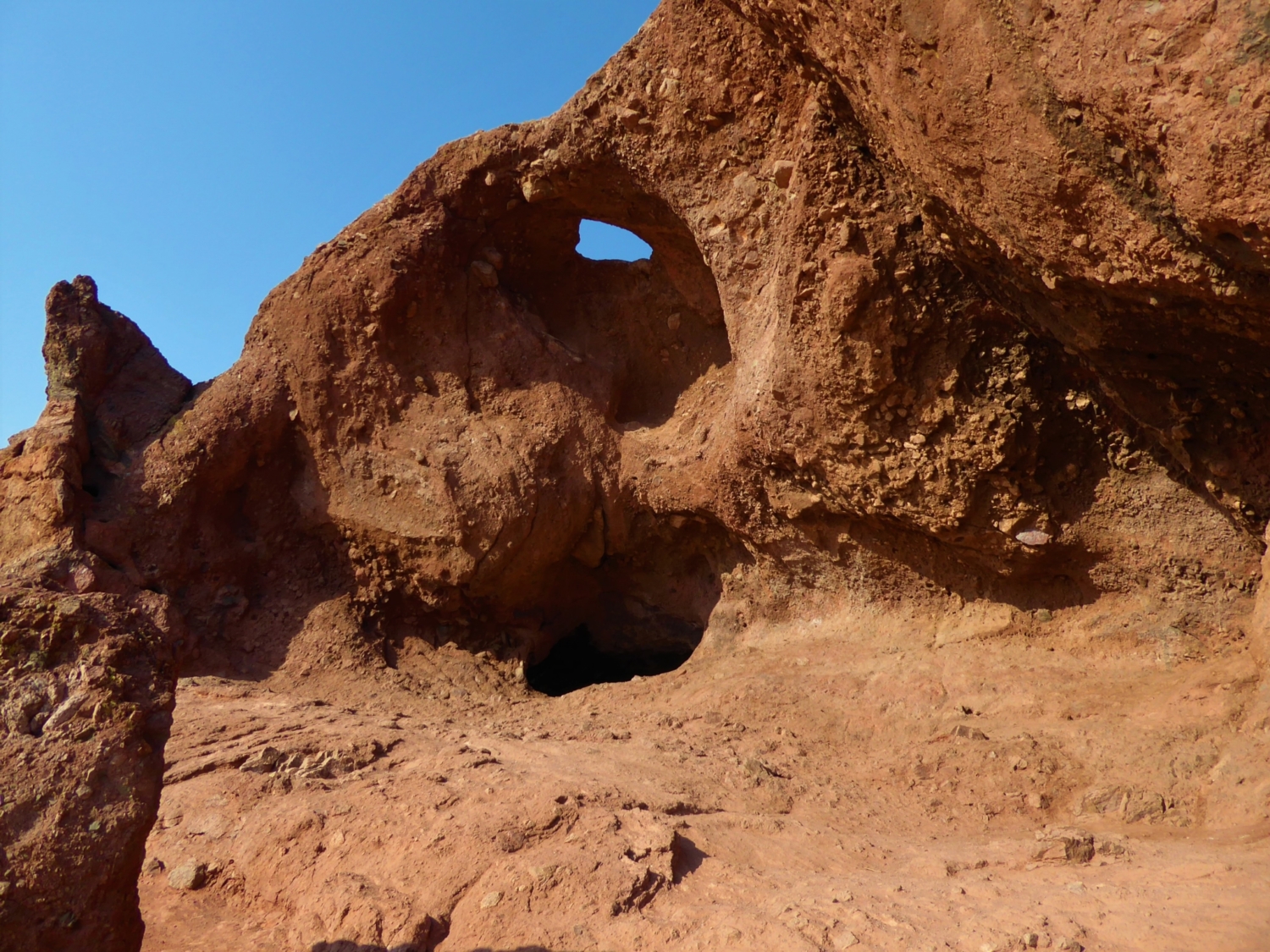 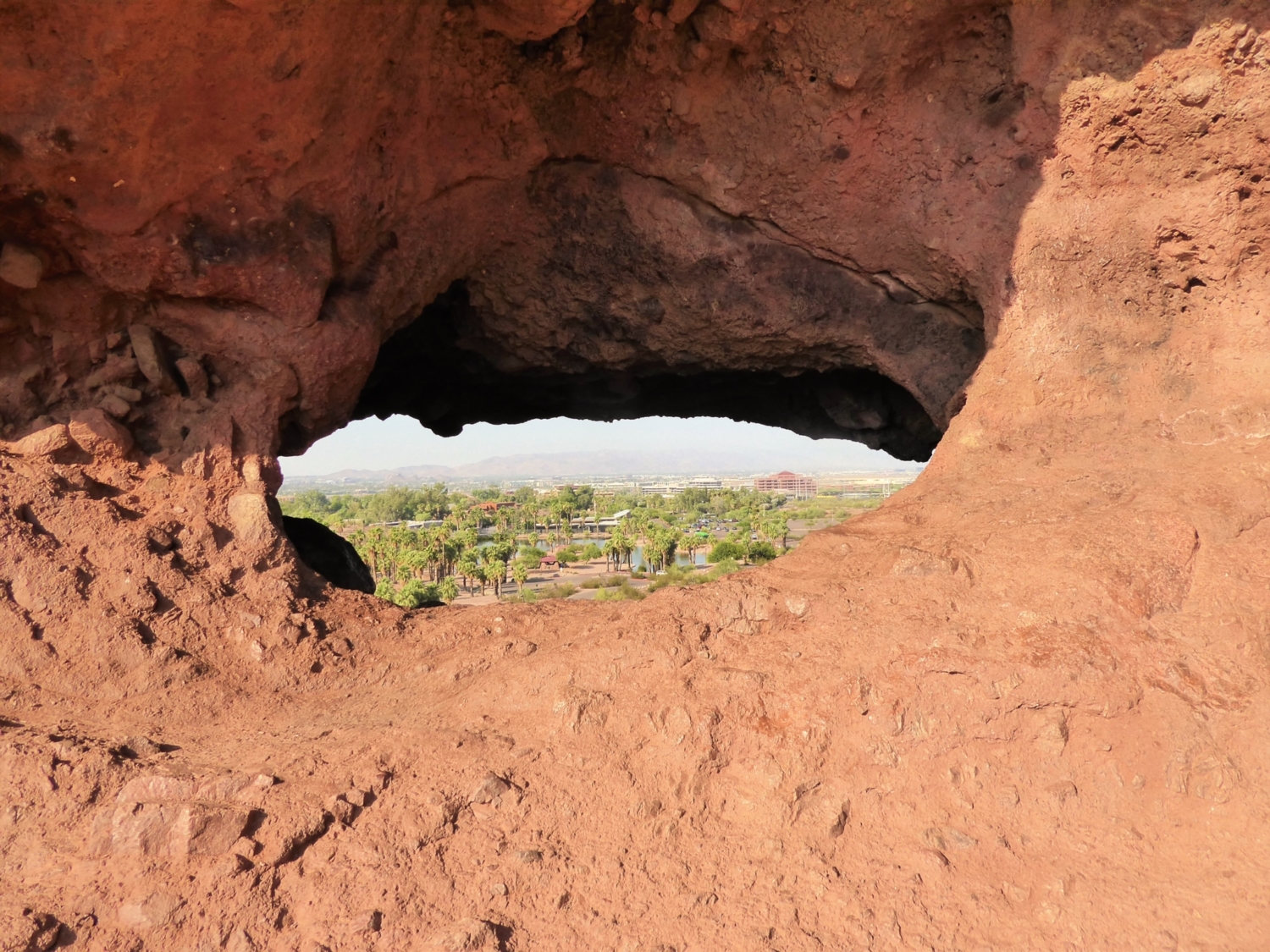 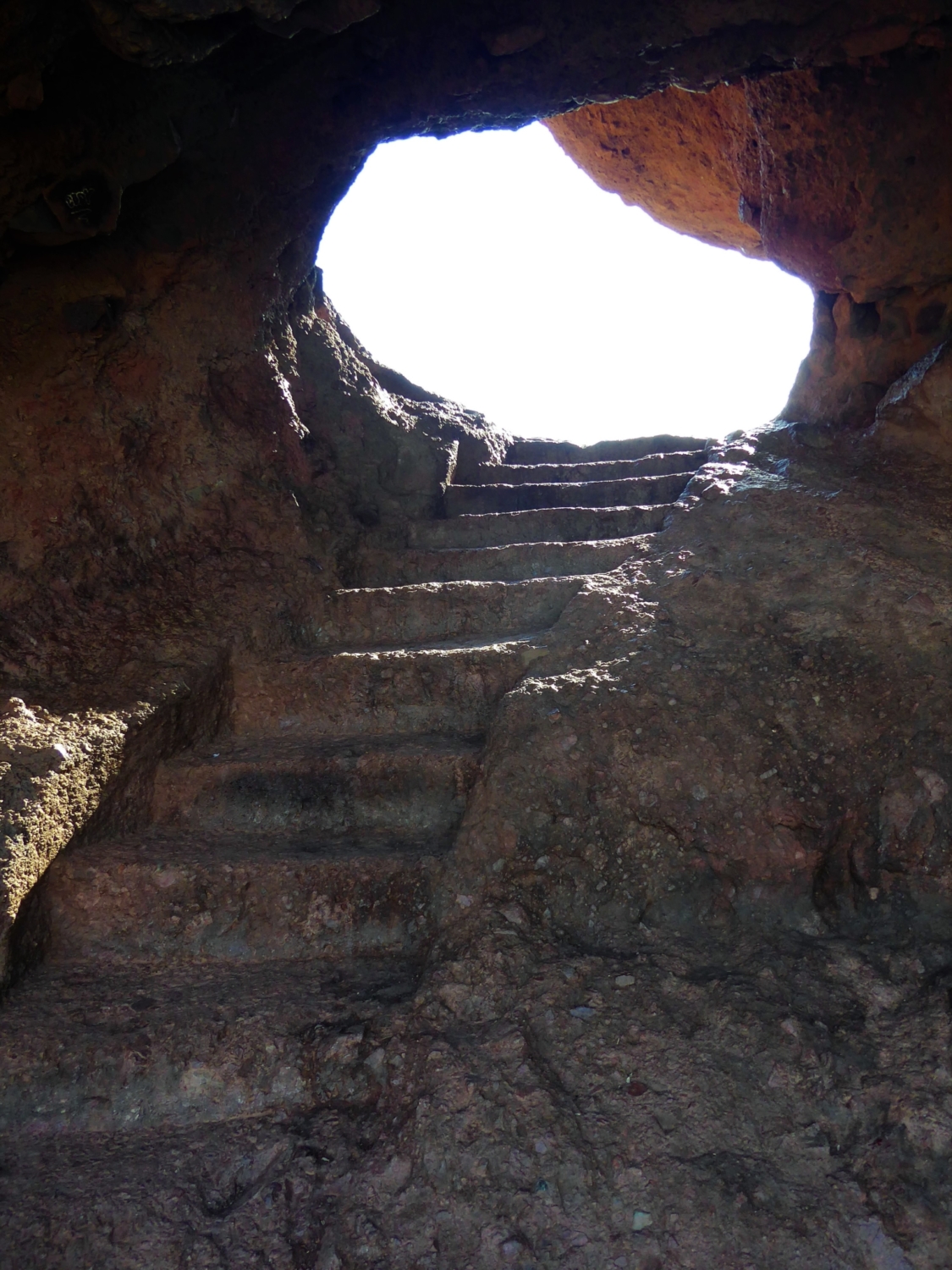 From downtown Phoenix take I-10E to AZ Loop 202 E (exit 147A - 147B). Get off on exit 4 to 52nd St (towards Van Buren St.) and turn right onto 52nd St, then a left onto Van Buren. In .8 mile turn left onto Galvin Pkwy. Turn right one N. Moreland St., left on Papago Rd. This turns into Ranger Office Loop and you will see parking lot on your right.