A relatively easy just over 2 mile trail to Zion’s Emerald Pools – miniature oases nestled in the impressive cliffs of Zion. Depending on the season, there may be light, misty waterfalls, too. This route takes the lesser-traveled Kayenta Trail, which also has better views than the shorter, more direct Emerald Pools Trail that starts near the Zion Lodge.

In a lot of ways, Zion National Park reminded me quite a bit of Yosemite – most of the “main attractions” (and visitors) crowd into the park’s eponymous valley while the upper reaches are generally less developed and less traveled.

I visited the park in the late winter, which meant there weren’t that many people there and the shuttle wasn’t running yet – still, I had enough trouble finding parking at the Emerald Pools Trailhead that I headed north to the Grotto Area … which was even more crowded because it’s also the trailhead for the popular Angel’s Landing hike.

After waiting, I eventually snagged a spot and crossed a bridge over the Virgin River to join the Kayenta Trail. From here, you can see the large monolith of Angel’s Landing directly to your north – but when you cross the river, stay to the left to head south along the canyon wall instead. 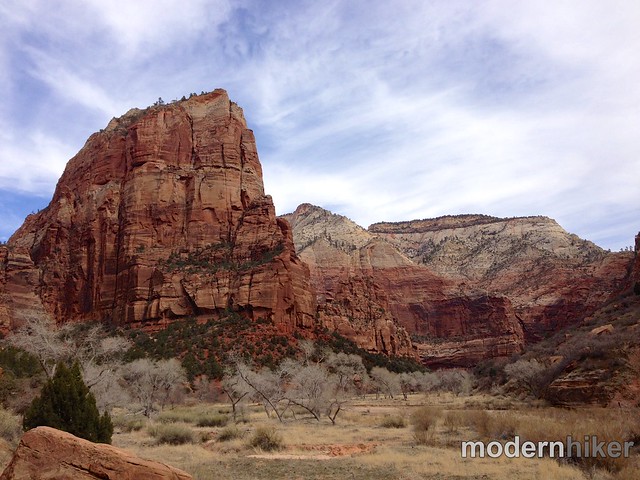 For the first half mile, the trail makes a slow ascent of 128 feet, mostly on a ledge that looks down on the river valley below. You’ll get some really nice views of the southern end of the canyon from here, looking past the Zion Lodge to Mount Moroni, with glimpses of the Watchman in the distance. 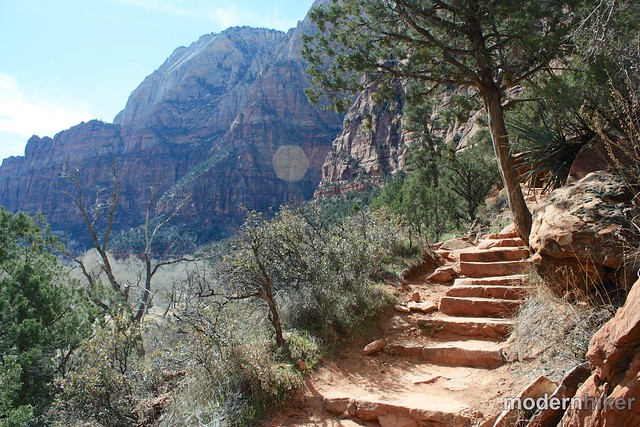 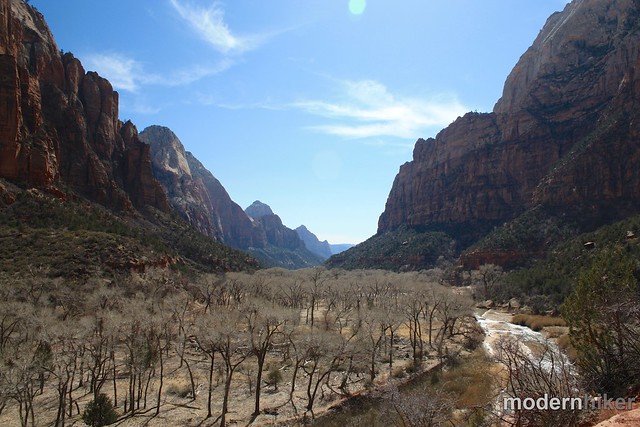 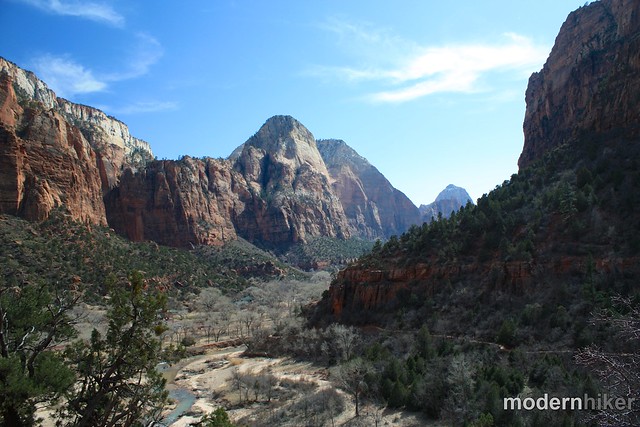 At the half mile mark, the trail makes a turn westward and enters the short canyon with the Emerald Pools. Here, you’ll start to see more signs of water – maidenhair ferns cling to the trail near weeping rocks, and desert varnish and trickles of water are visible in the sheer red rock canyon walls in front of you. 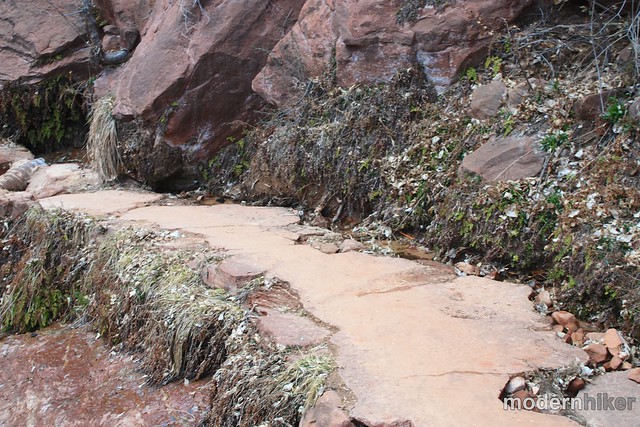 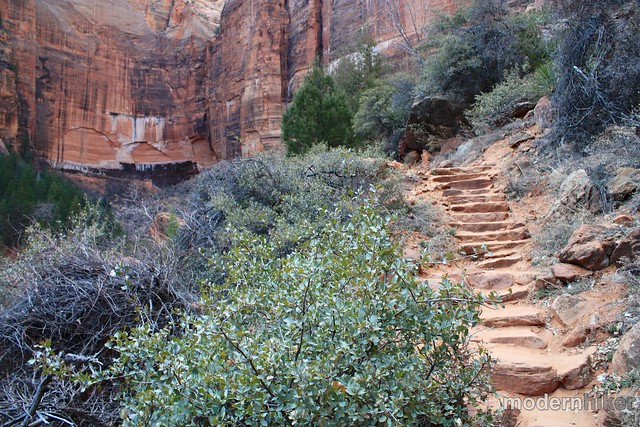 You’ll also be able to see the cliffs and waterfalls beyond the Middle Emerald Pools – although during most times these waterfalls won’t be more than a trickle. 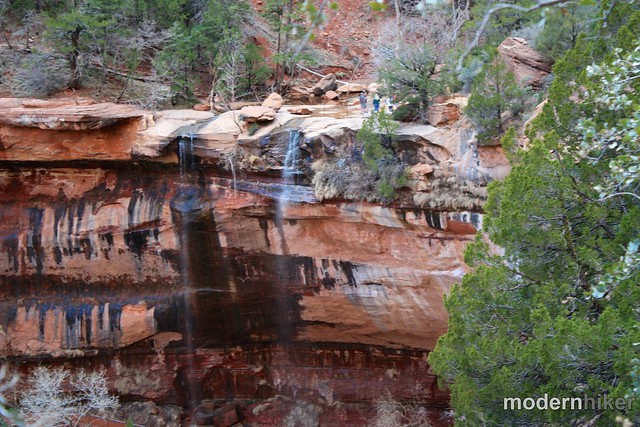 Near the 0.8 mile mark, the trail winds through a few moderately tight non-technical squeezes in the rocks and comes to a marked junction. From here, you can descend to the Lower Emerald Pools (this section of trail was closed when I was there). If you head to the Lower Pools, you can continue on a paved path to the Zion Lodge Tram Stop for 0.6 miles – but first, head toward the Middle and Upper Emerald Pools – and be sure to stop to soak in some canyon views, too. 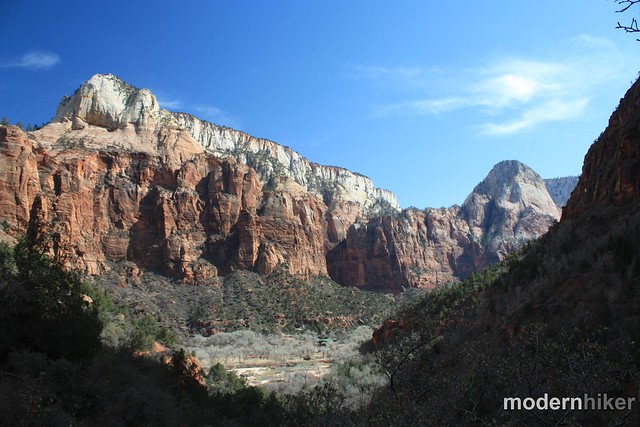 You’ll reach the Middle Emerald Pools in just about 0.1 miles. Here, the trail gets a bit more rugged – but significantly more photogenic, too. The Middle Pools are small depressions in a stream from the Upper Pool that gather just above a cliff. 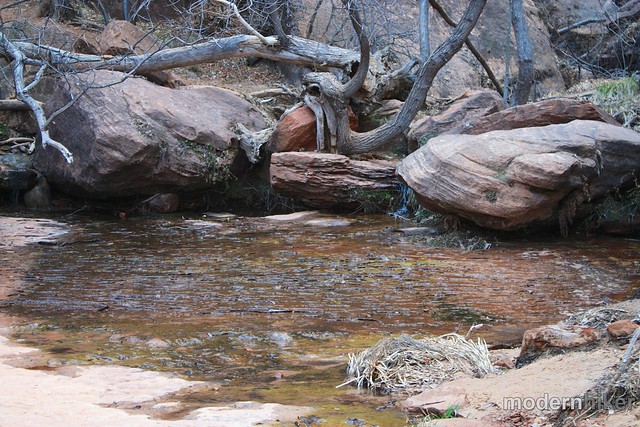 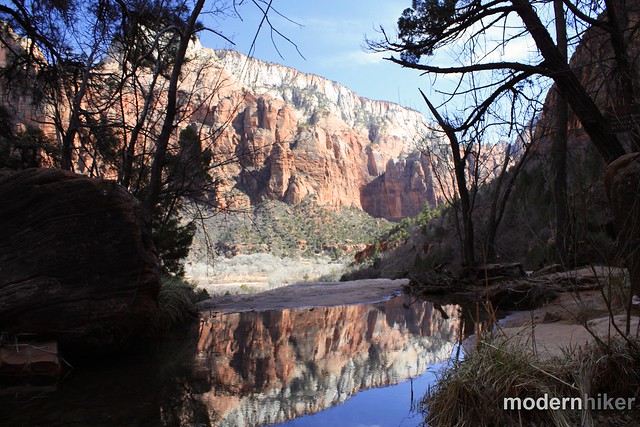 The final stretch of this trail is the steepest you’ll have encountered so far, rising 144 feet in just 0.2 miles. It’s rugged but still manageable for just about every hiker. While you’re heading toward the Upper Pool, be sure to stop to look at the canyon behind you every once in a while, too. 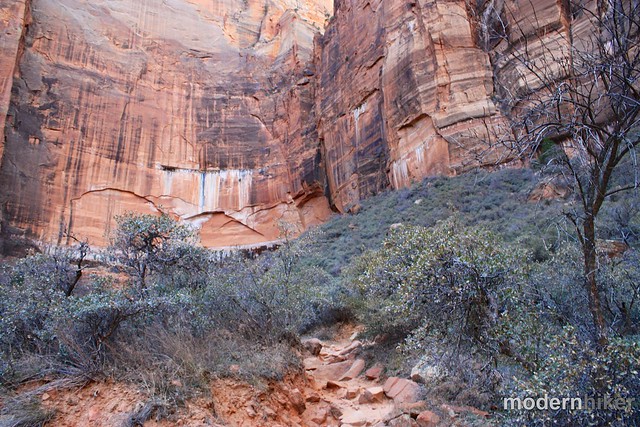 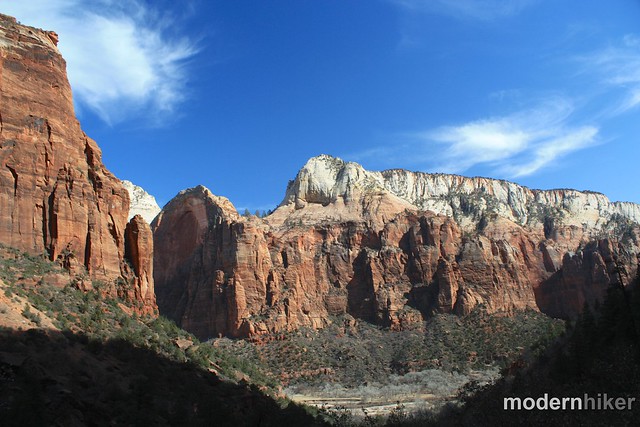 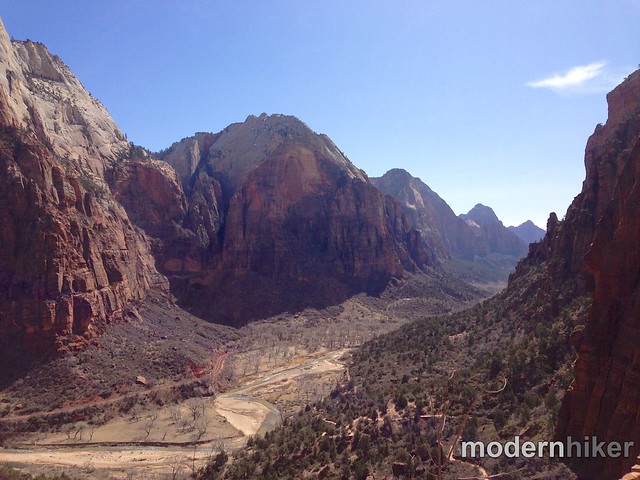 At the 1.2 mile mark, the trail makes a short climb before dropping into a small slickrock alcove. The sheer walls tower around you while a distant, seemingly atmospheric mist gently tumbles from Heaps Canyon into the Upper Emerald Pool at your feet. The combination of the mist, the shade, and the breeze whipping up the canyon significantly cools this area … which might explain why there was still a good amount of snow hiding out here when I visited. 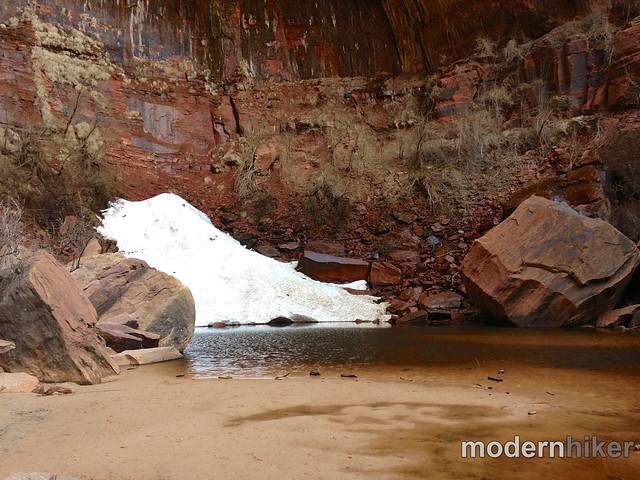 When you’re done, head back the way you came or head south at the junction to the Lower Emerald Pool and the Zion Lodge tram stop.

Excellent - the Kayenta trail has a few drop-offs and lots of boulders but is otherwise fairly easy to hike. Junctions are well-marked.

For most of the year, Zion National Park has a shuttle system in the canyon to reduce traffic. The trailhead for this route is located directly across the street from the Grotto Stop. If you are visiting in the winter, there is also a small parking lot.

Beautiful photos! I've only been to Zion once and that was to hike Angel's Landing. I've wanted to go back and do the Narrows and Subway but now I'll have to add this hike to the list.