Arriving at the Valley of Fire at sunset leaves no question as to how the valley got its name. Spectacular red sandstone formations, glowing at golden hour, rise in sculpted shapes from the desert floor. The features are solidified shifting sand dunes from the age of dinosaurs. Of course, they’re also impressive in the morning and afternoon. The Valley of Fire State Park, 50 miles northeast of Las Vegas, is the oldest and largest state park in Nevada. It spans close to 42,000 geologically spectacular acres, and although it’s known for the red Aztec Sandstone, it also delivers dazzling white limestone formations, shale, conglomerate, colorful vistas, slot canyons, arches, pinnacles, petrified logs, petroglyphs and more! 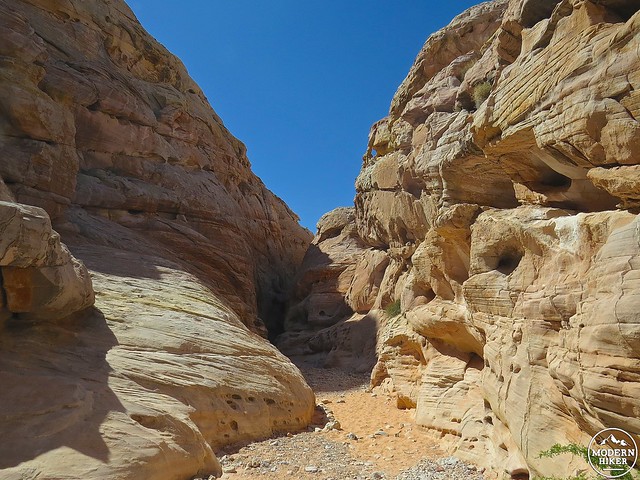 There are a few unmaintained trails in the park, but the best introduction to Valley of Fire is the handful of short, easy and highly rewarding trails maintained by the park service. Two paved roads and a loop road cover 18 scenic park miles and give access to the five main hikes. They range between .25 and 1.5 miles. Valley of Fire’s spectacular landscape is concentrated in a relatively small area (as wide open desert spaces go), and the trails are designed to give visitors a taste of the region’s geologic bounty but protect its fragile resources. We got started around 8am, hit the visitor center, and then began our series of drives and hikes. We were there on a busy spring weekend, and starting on the early side kept us one step ahead of the critical mass of visitors and even gave us a few moments of solitude in the gorgeous morning light. 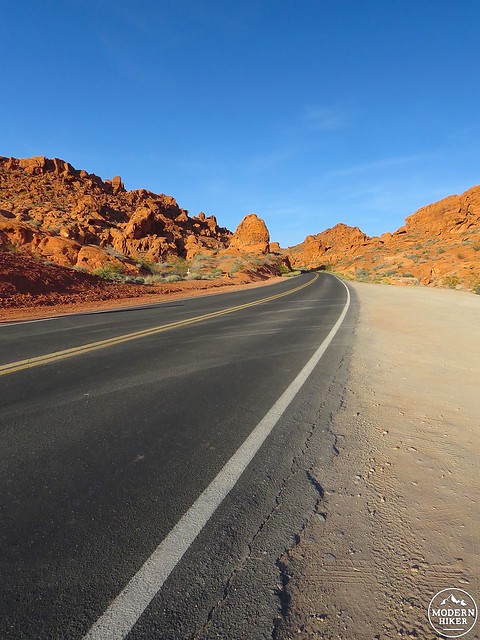 Heading north from the visitor center on the White Domes Road, Mouse’s Tank (Petroglyph Canyon) is the first hike. This 1-mile round strip stroll follows a sandy picturesque canyon to end at a tinaja. Tinajas are natural rock basins that naturally capture and store rainwater. This spot was named for an outlaw who used it as a hideout in the 1890s. The real star here, though, are the extensive petroglyph panels etched into both sides of the canyon. They date back to approximately 3,000 years and the Basket Maker people and Ancient Pueblo farmers. The petroglyphs are very well preserved and visible, but we ran into some folks in the parking lot who somehow hadn’t seen them on their hike. Look for the dark wind-blasted “desert varnish” layer on red sandstone (this formed the natural canvas). Take your time, and if all else fails, stop and look where other people are looking. 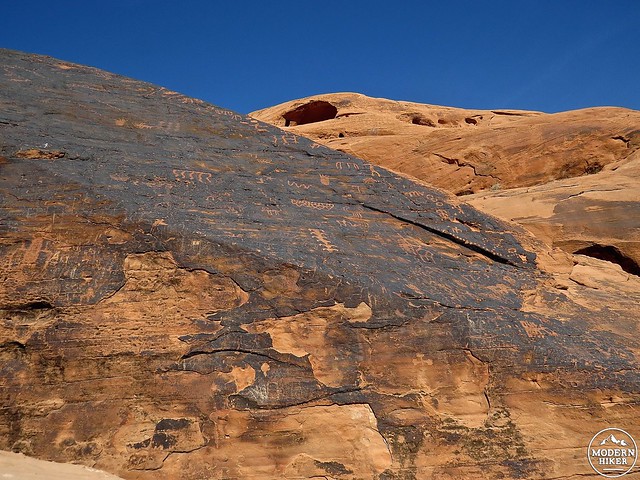 Petroglyph panel on the way to Mouse’s Tank. 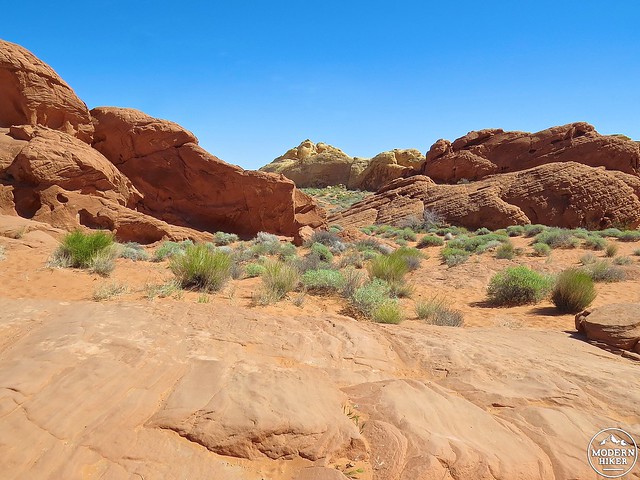 Contrast of red stone and sage on the Rainbow Vista Trail.

Describing the park’s highlights, the ranger at the entrance station told us that the Fire Wave Trail (1.5 mile r/t) was the favorite of European visitors. I’ve seen a lot of beautiful desert landscapes, and I wasn’t convinced that I would be as awed as tourists coming to the southwest for the first time. My conclusion after visiting? The Fire Wave is incredible! It was easily my favorite of the day. The hike starts as an unassuming white sand trail leading toward a rocky hill. Once the trail swings around the hill, the fire part comes into view. Red and white striated formations stretch into the distance and become the trail. Follow the main established trail and you will soon be walking in an increasingly dramatic and alien landscape. Cairns mark the way across the sandstone until the trail ends at a gentle drop and a final sensational formation. Confronted with spectacular scenery that transports us to another world it can be tough to find the right words. I’ll just say that the Fire Wave looks like an impressive slice of bacon. 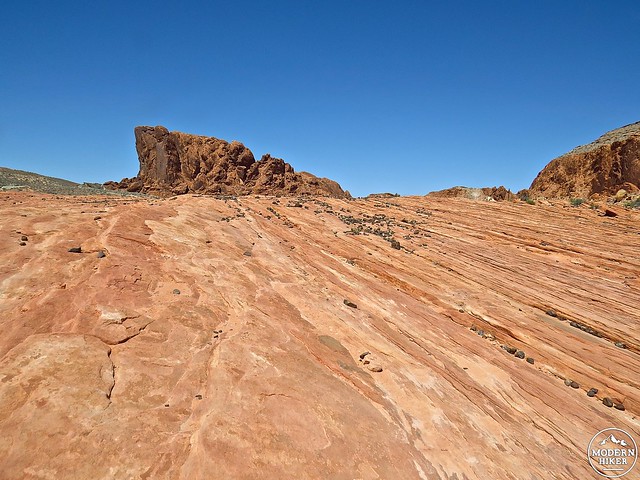 The trail to the Fire Wave puts you in the middle of the dramatic landscape.

The White Domes Road ends at a picnic area and last hike on the White Domes Road. The White Domes Trail is a 1.25 mile loop that winds through dazzling white rock formations, the remains of an old Hollywood movie set and a slot canyon. The rocks on the return part of the loop are multicolored; the reds result from rusting iron in the sand after being exposed to oxygen. The Hollywood movie set was from the 1966 movie The Professionals, but the ruins blend into the landscape surprisingly well and add an air of mystery to the hike. 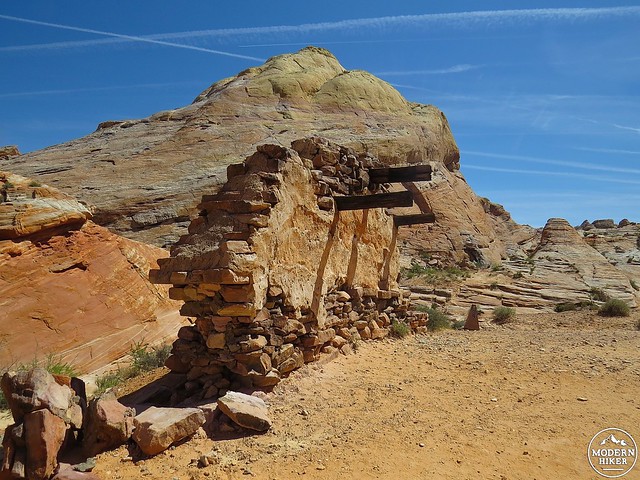 The final short hike is the Arrowhead Trail located off the Valley of Fire Road that runs 10.5 miles east to west, entrance to entrance. The Arrowhead Loop trail (1.5 miles r/t) passes by the popular Elephant Rock and winds through heavily pocketed fiery red formations with vistas to the east. The Arrowhead Loop has the distinction of being part of the historic Arrowhead Trail or Arrowhead Highway. Built for autos in the 1910s, it was the first all-weather road to connect Los Angeles with Salt Lake City via Las Vegas. You can find a longer stretch of the original trail and an information plaque on the south side of the highway across from the parking area. This is a beautiful hike to do in the late afternoon light, and located off the main drag it’s possible to have it to yourself. 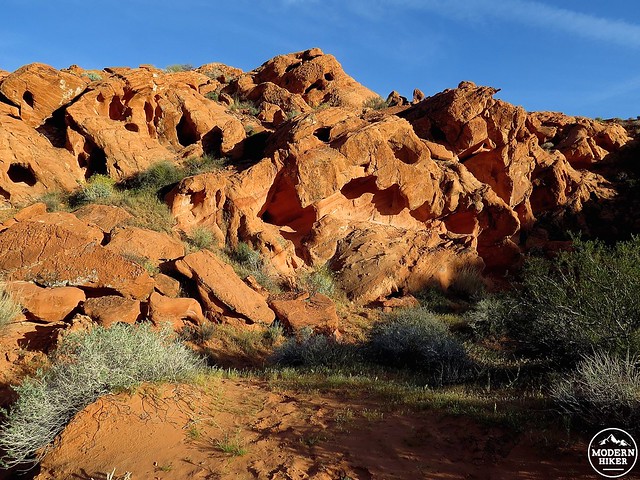 Accommodations near Valley of Fire 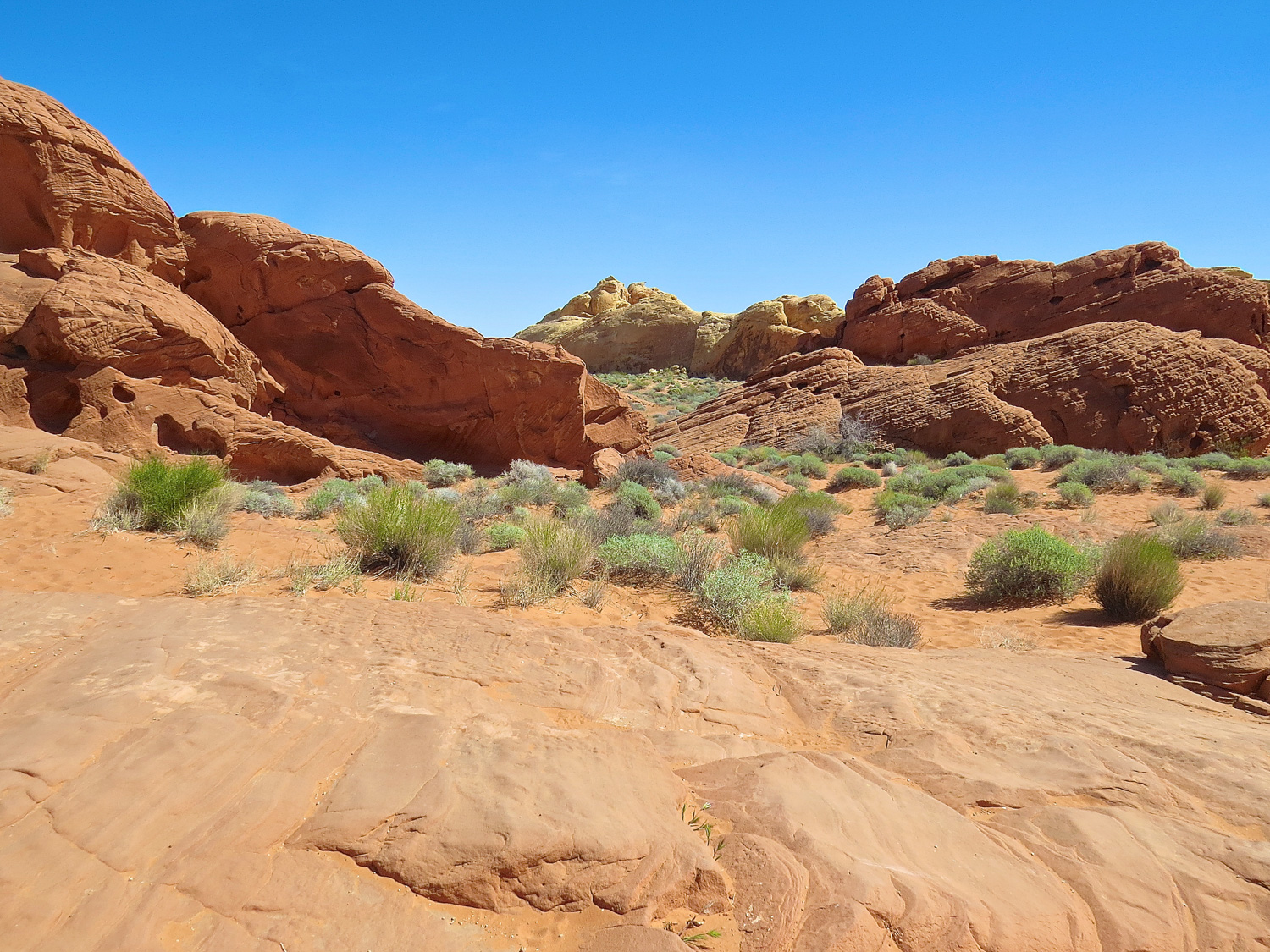 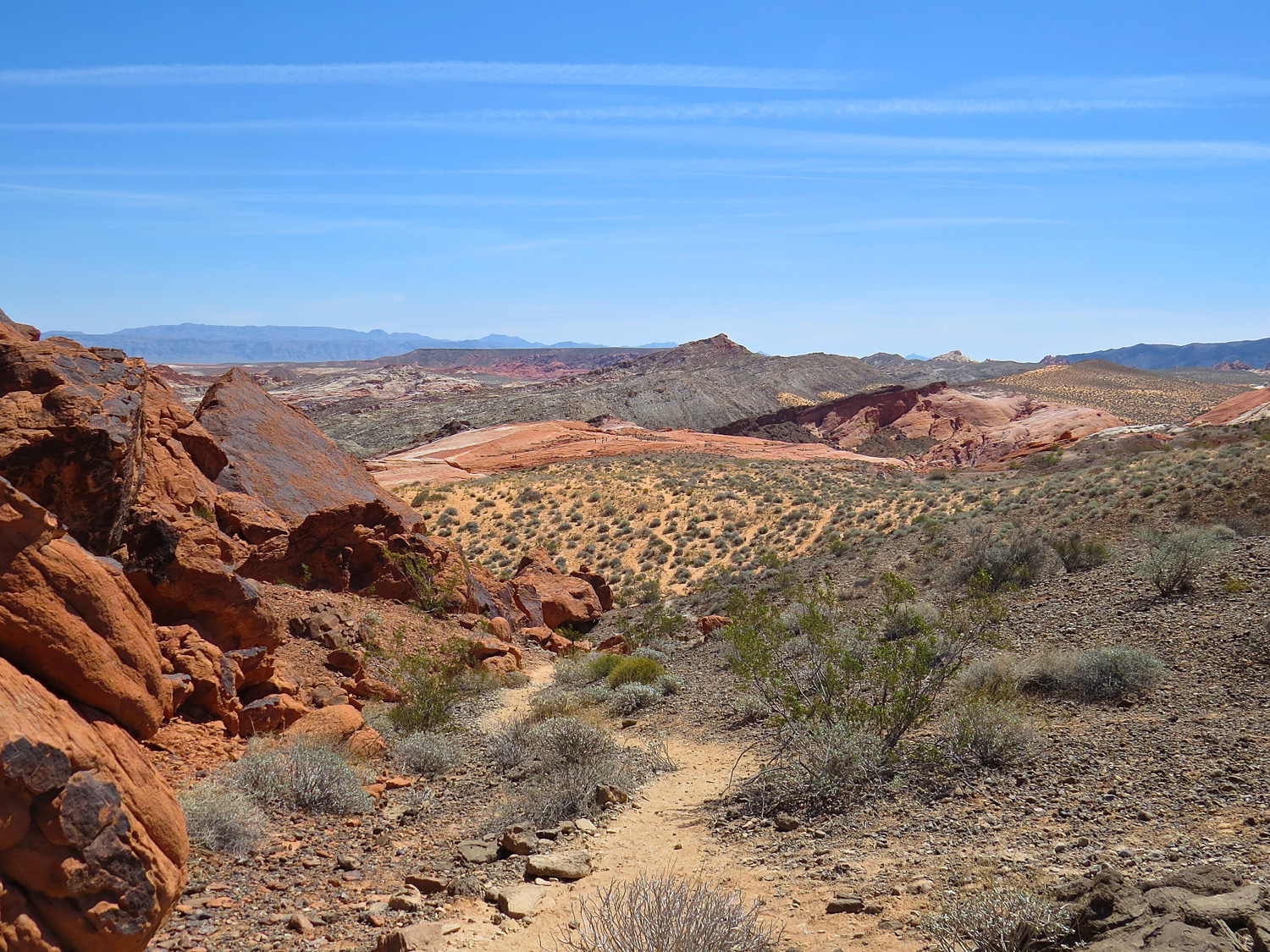 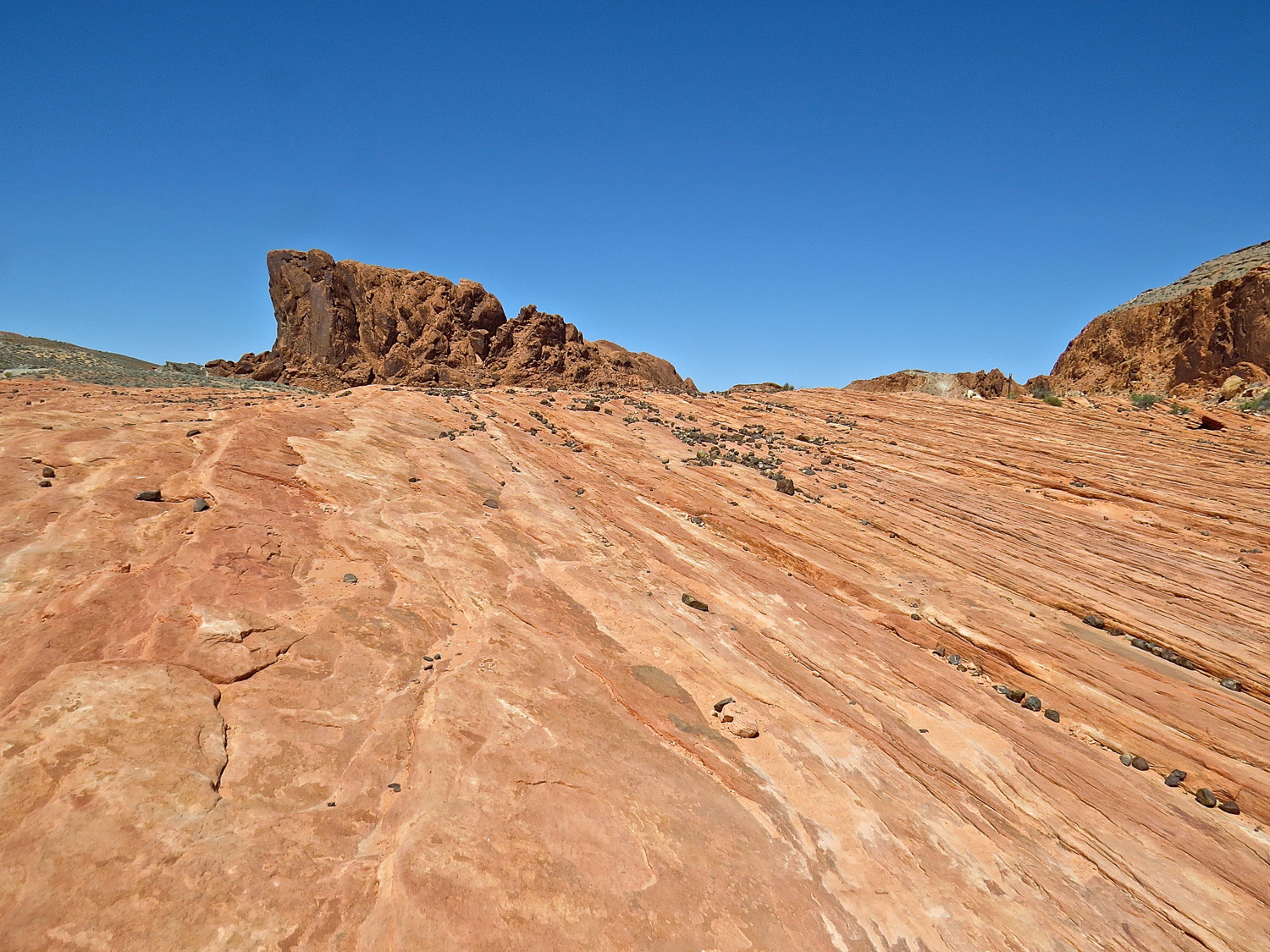 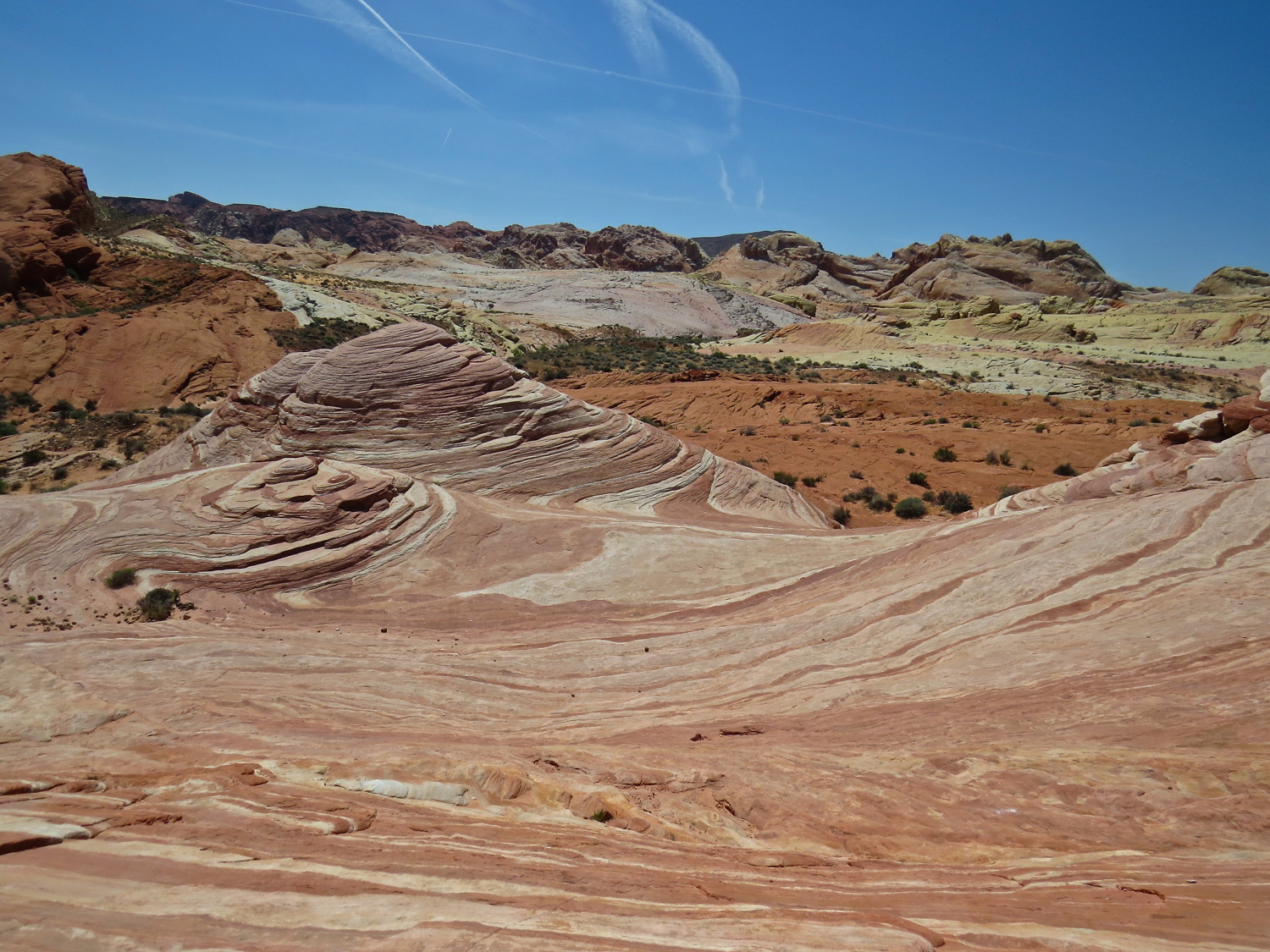 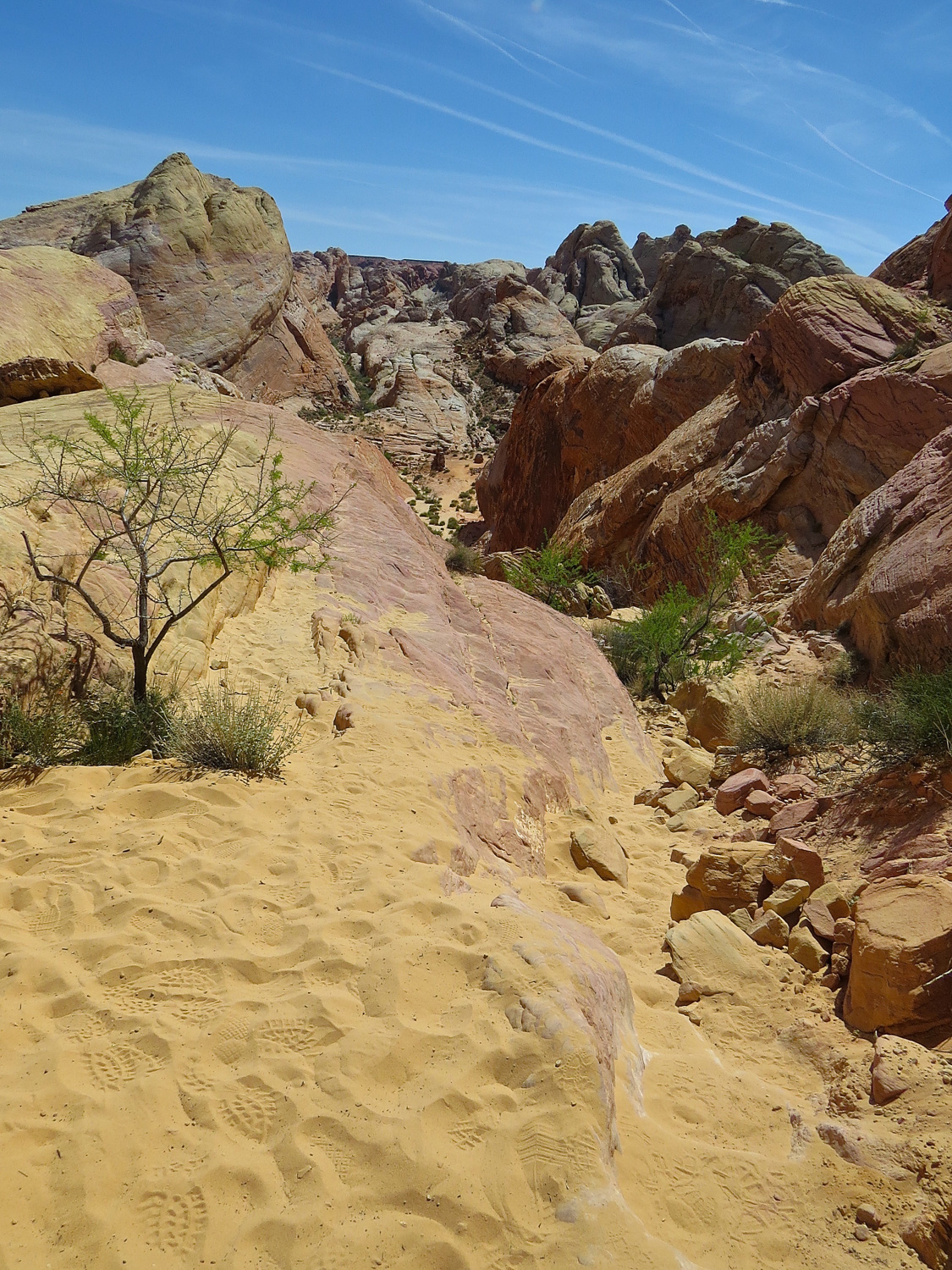 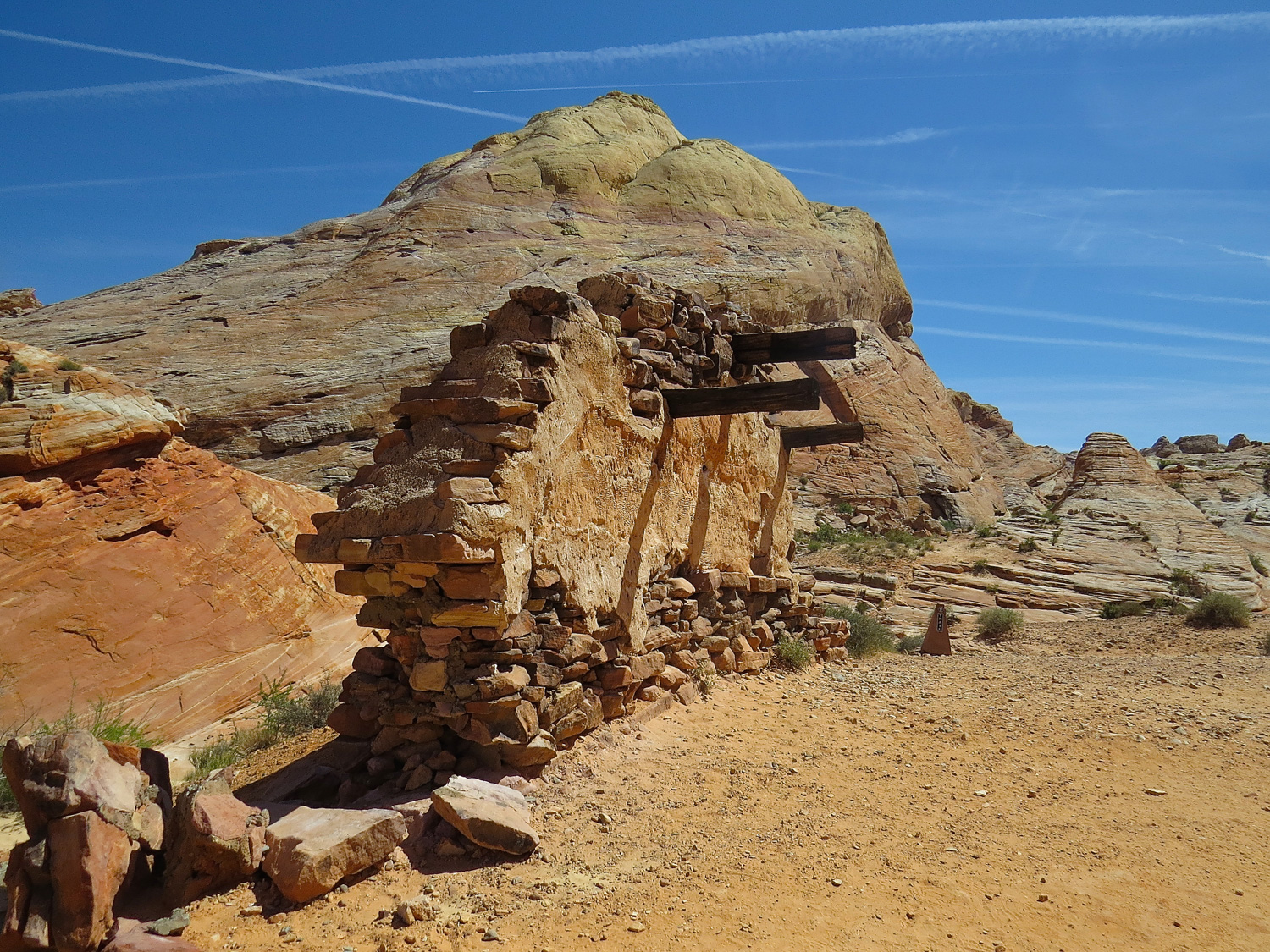 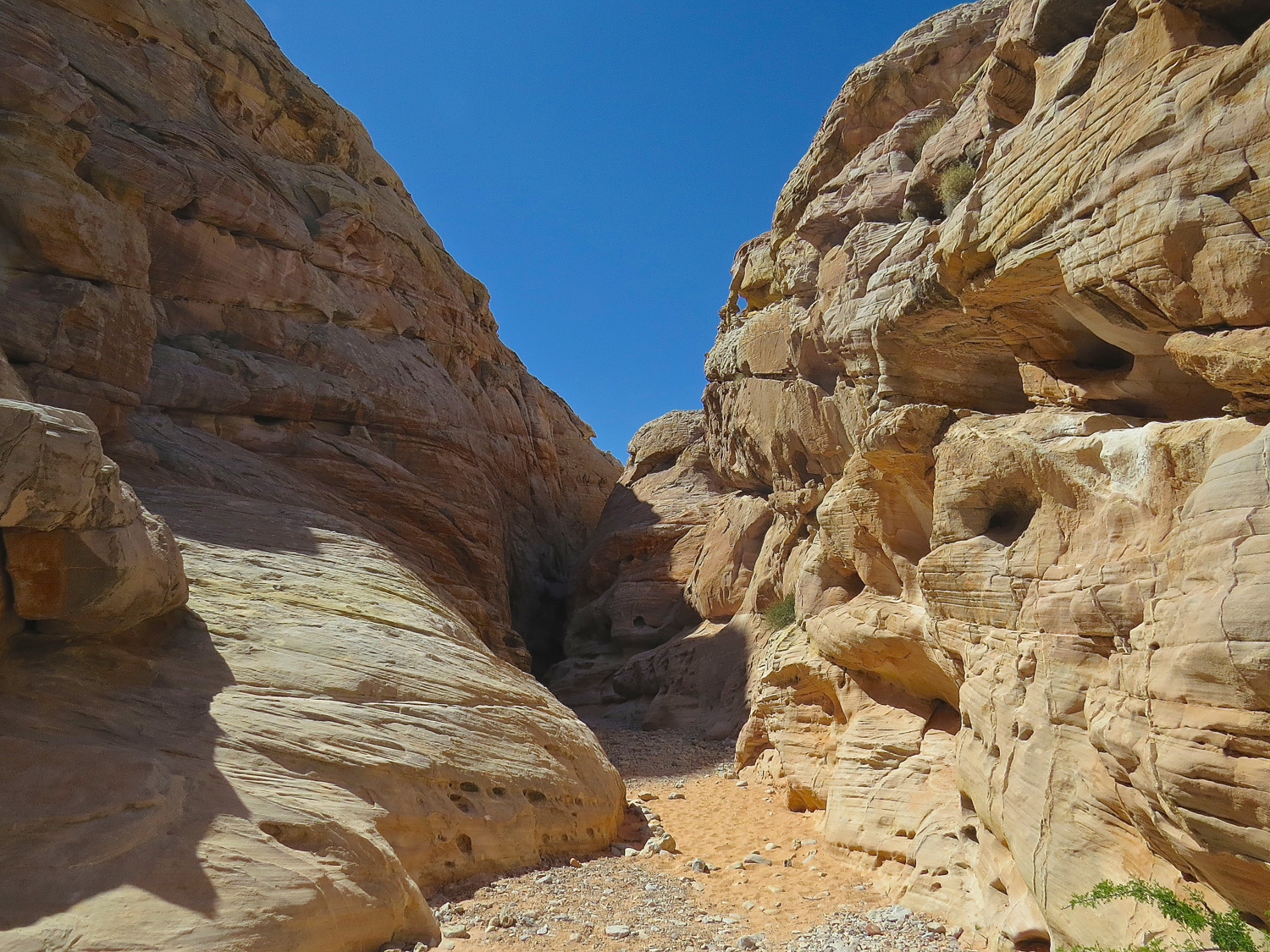 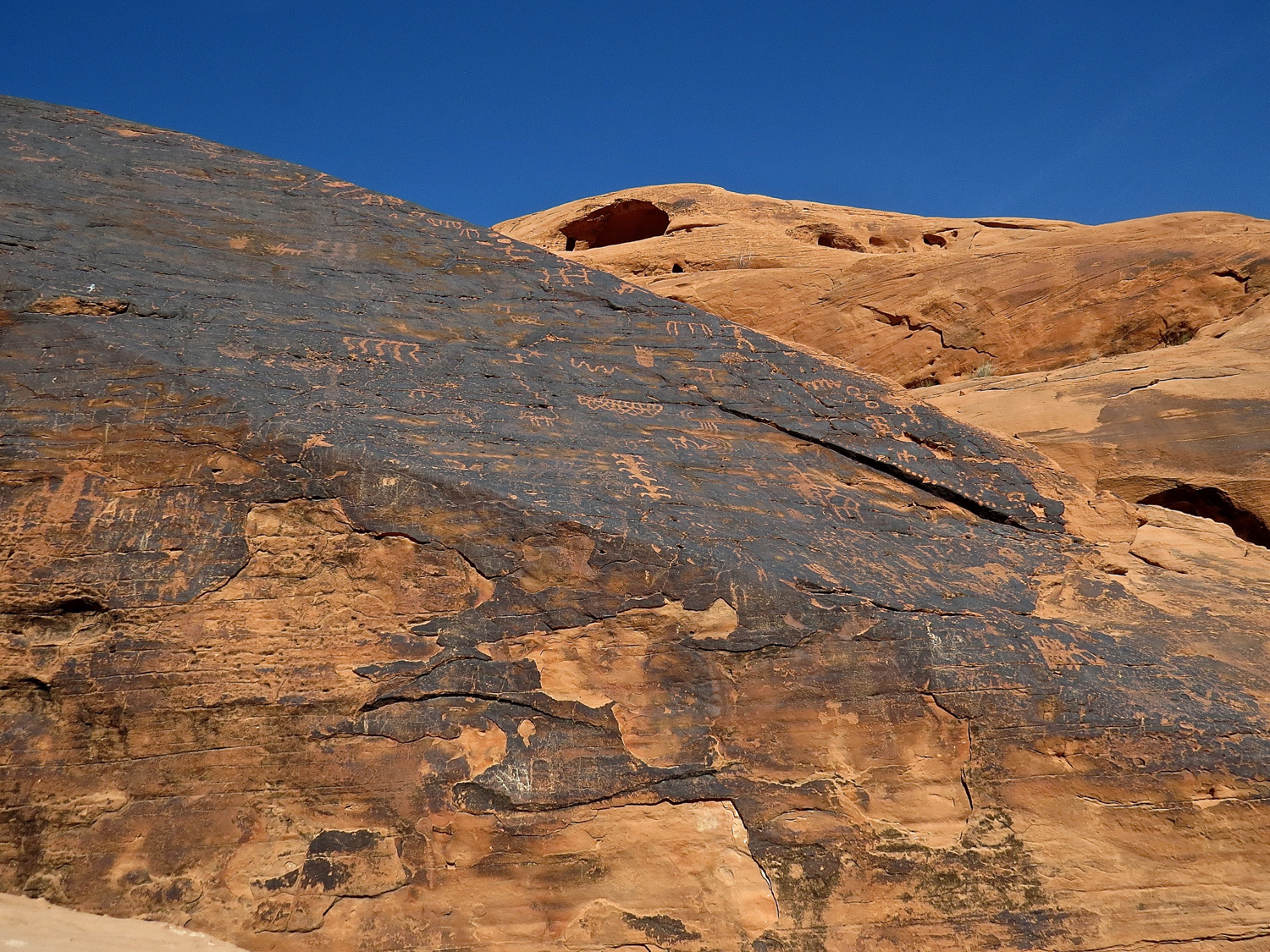 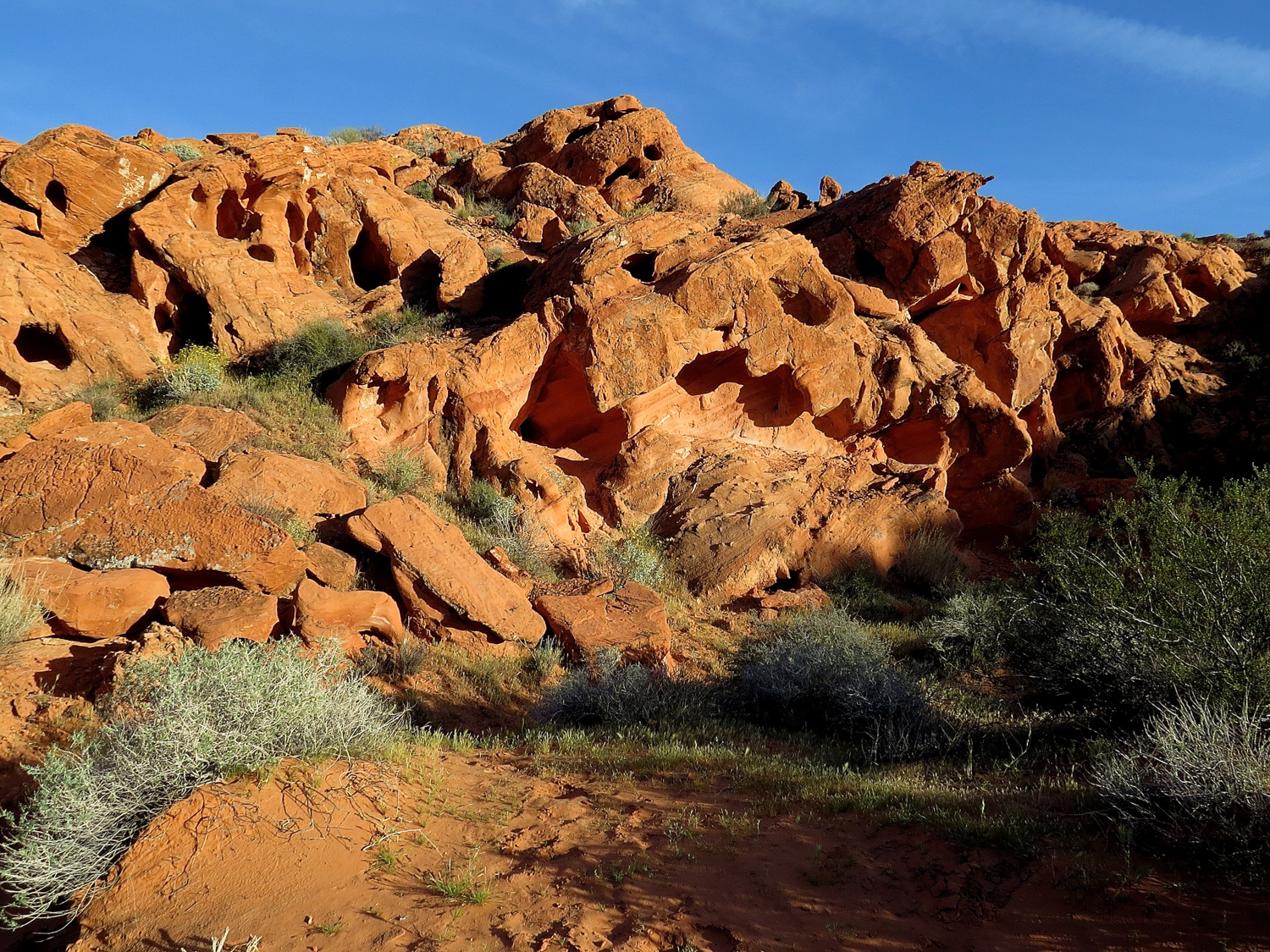 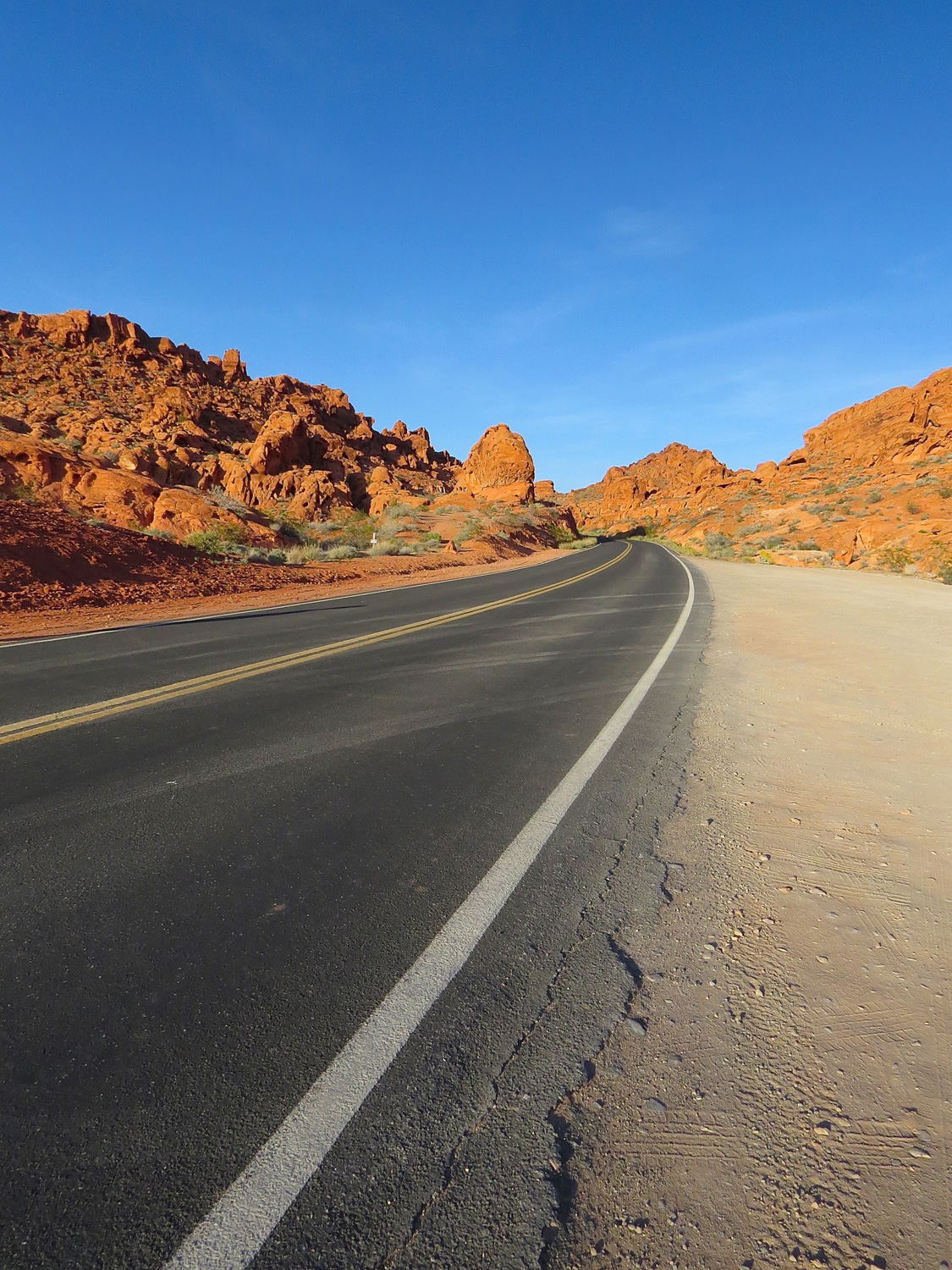 The major trails included here are well marked, easy to follow and very closely maintained by the park service. The sandstone rock formations that characterize Valley of Fire mean that many of the trail surfaces are sand.

Valley of Fire has two campgrounds located within the park boundaries. Atlatl Rock Campground has 44 campsites. Half of the sites are suitable for tents or small campers and half are RV sites with water and power hook-ups. The campground also offers showers and restrooms with flush toilets. Arch Rock Campground is more primitive and secluded with 29 campsites tucked among the signature red rock formations. It may also offer better shelter from the wind, which can be gusty in the evenings. Arch Rock Campground has vault toilets, but it is possible to use the bathrooms and showers at the nearby Atlatl Rock Campground. All sites in both campgrounds offer picnic tables, fire pits, and shade structures. Campsites are available on a first-come basis. Both campgrounds are supremely scenic (Arch Rock a little more so) and can fill up quickly on holidays and popular weekends in spring. If all else fails, there is backcountry camping available on BLM land west of the western park entrance. Backcountry camping and developed campgrounds are also available in the Lake Mead Recreation Area 6 miles to the east.

From Las Vegas, NV take I-15 North for 33 miles to Exit 75, Valley of Fire Highway. Drive 15 miles east to the entrance to Valley of Fire State Park. Park passes are required. Fees are $10 per car or $8 for Nevada residents for a 7 day pass. The Moapa Paiute Travel Plaza owned and managed by the Moapa band of Paiute Indians offers the last supplies--gas, ice, snacks, and a huge supply of liquor and fireworks just in case.