This short and relatively easy trail puts you within sight of the hanging Angel Glacier and the otherworldly blue glacial pond beneath Mount Edith Cavell — the most prominent peak entirely within the boundaries of Alberta — which was named for an incredible heroine of World War I. Further trail options include a beautiful alpine meadow, and a challenging technical ascent of the peak itself.

The Angel Glacier on Mount Edith Cavell is just a short distance south of Jasper Townsite in Jasper National Park. A large trailhead and easy trail means this can be a popular trek for hikers during the peak season, so we recommend getting here early in the morning or later in the evening if you want to try to avoid the crowds.

When we visited this area, we were trying to get in a few short day hikes before a predicted storm moved into the region, so when we arrived at the trailhead the parking lot was mostly empty — and storm clouds had begun to obscure the upper reaches of the mountains above us. Still, though, the site of the impressive east-west ridge of Mount Edith Cavell and the Angel Glacier — half clinging to the side of the peak and half in flight — was absolutely stunning. 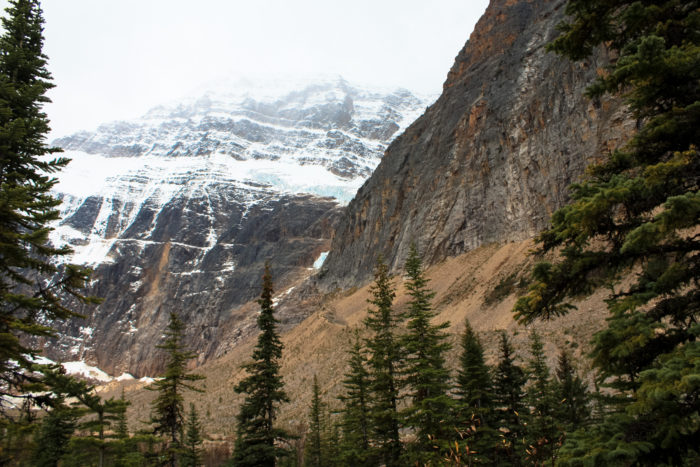 The 0.25 mile one-way path to the primary overlook of the glacier itself is fairly easy and fairly straightforward. It’s also a paved path that’s almost impossible to miss. 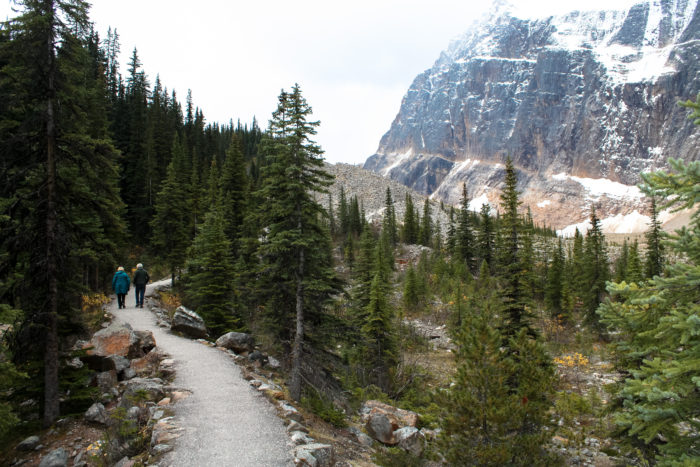 The path makes a steady but easy climb to a well-defined overlook of the glacier and Cavell Pond at about the 0.25 mile point. On the way, ignore the Cavell Meadows Trail on your left. This route takes you to an alpine meadow just to the east of the glacial valley, where you can enjoy summer wildflowers and hike to a high point just above 2560m for a better view of the valley. 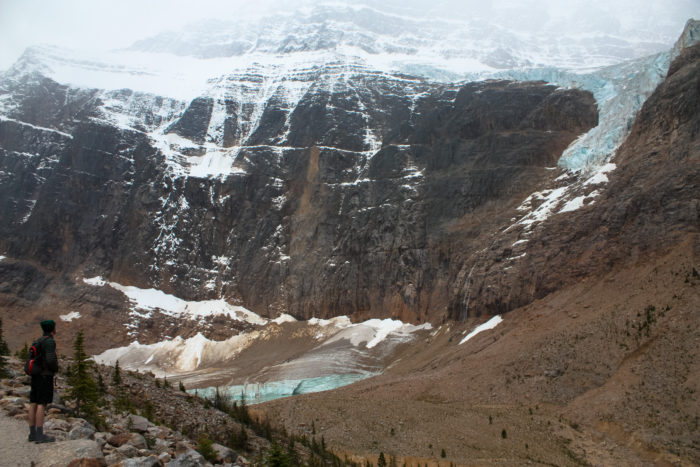 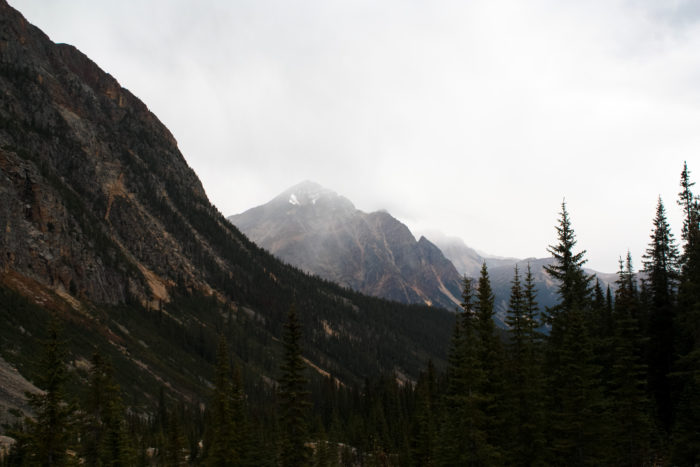 The Angel Glacier is a hanging glacier that was named for its seeming likeness to the form of an angel. When it was first named, the glacier extended all the way down the side of the mountain and horizontally for some distance. With climate change bringing rising temperatures, this glacier has receded significantly and it is not expected to maintain this distinctive shape for much longer. 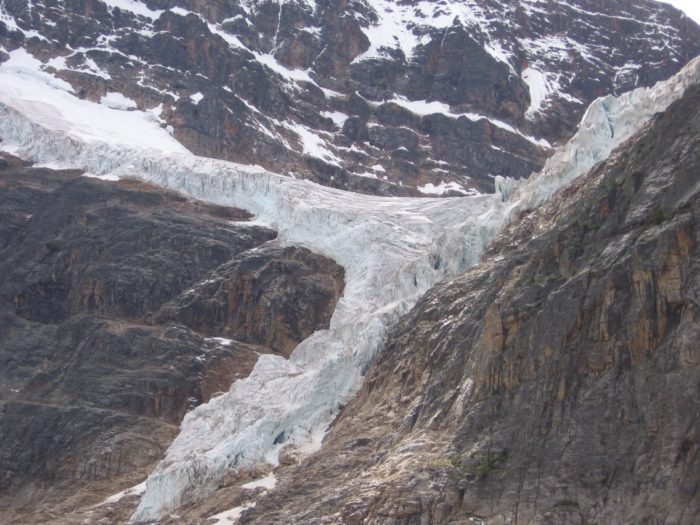 From the overlook, you will notice a faint path in the valley below you, as well as another path leading to the glacial lake itself.

In August of 2012, a massive chunk of the Ghost Glacier (which sits above the Angel Glacier on Mount Edith Cavell) fell into Cavell Pond. The impact created a flash flood that carried rock, ice, and debris down the valley, washing out the trail and flooding the valley east toward Cavell Lake. Geologists have determined there is a significant likelihood of such an event occurring again, and Parks Canada has closed both the Path of the Glacier Trail in the valley below as well as access to Cavell Pond.

You may be tempted to get closer to Cavell Pond — and we definitely saw others down near its shores when we were visiting — but for safety’s sake it is best to admire the pond from a distance. 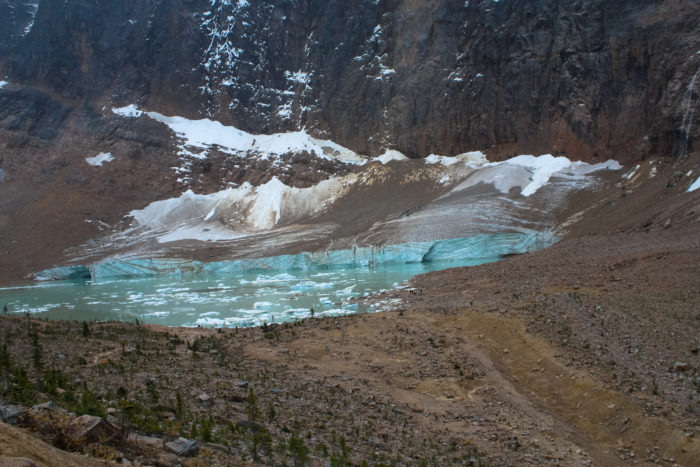 Mount Edith Cavell was formerly known as La Montagne de la Grande Traversée — or the Mountain of the Great Crossing. The peak was renamed in 1915 to honor Edith Cavell, a British nurse and head of a teaching hospital in Belgium.

Cavell was visiting family in England when World War I broke out, but instead of staying in the relatively safety of her home country, she insisted on returning to her hospital in Brussels because she thought she could be of more help there. Cavell’s hospital became a neutral Red Cross and she provided aid to both Allied and German soldiers without discrimination.

Eventually, she began helping smuggle Allied soldiers and French and British civilians out of Belgium and into the neutral Netherlands after being supplied with false passports by collaborators. Although she is credited with saving over 200 lives in this manner, it broke the neutral protection offered to her by the Red Cross. Cavell was eventually betrayed by one of her collaborators and arrested by German military police. After it was discovered that the men she helped had escaped back to the United Kingdom — a country at war with Germany — she was convicted of treason and executed by firing squad on October 12, 1915. The night before her execution, she told a priest, “Patriotism is not enough. I must have no hatred or bitterness towards anyone.”

Cavell became an influential martyr figure after her death, and her story was well known amongst Allied nations and especially the British empire. This mountain was renamed for her in 1916 and you can still find memorial poppies left for her at the trailhead.

Learn more about Edith Cavell at her Wikipedia entry or learn about the Cavell Nurses’ Trust, a nonprofit organization dedicated to giving back to health care professionals in the United Kingdom. 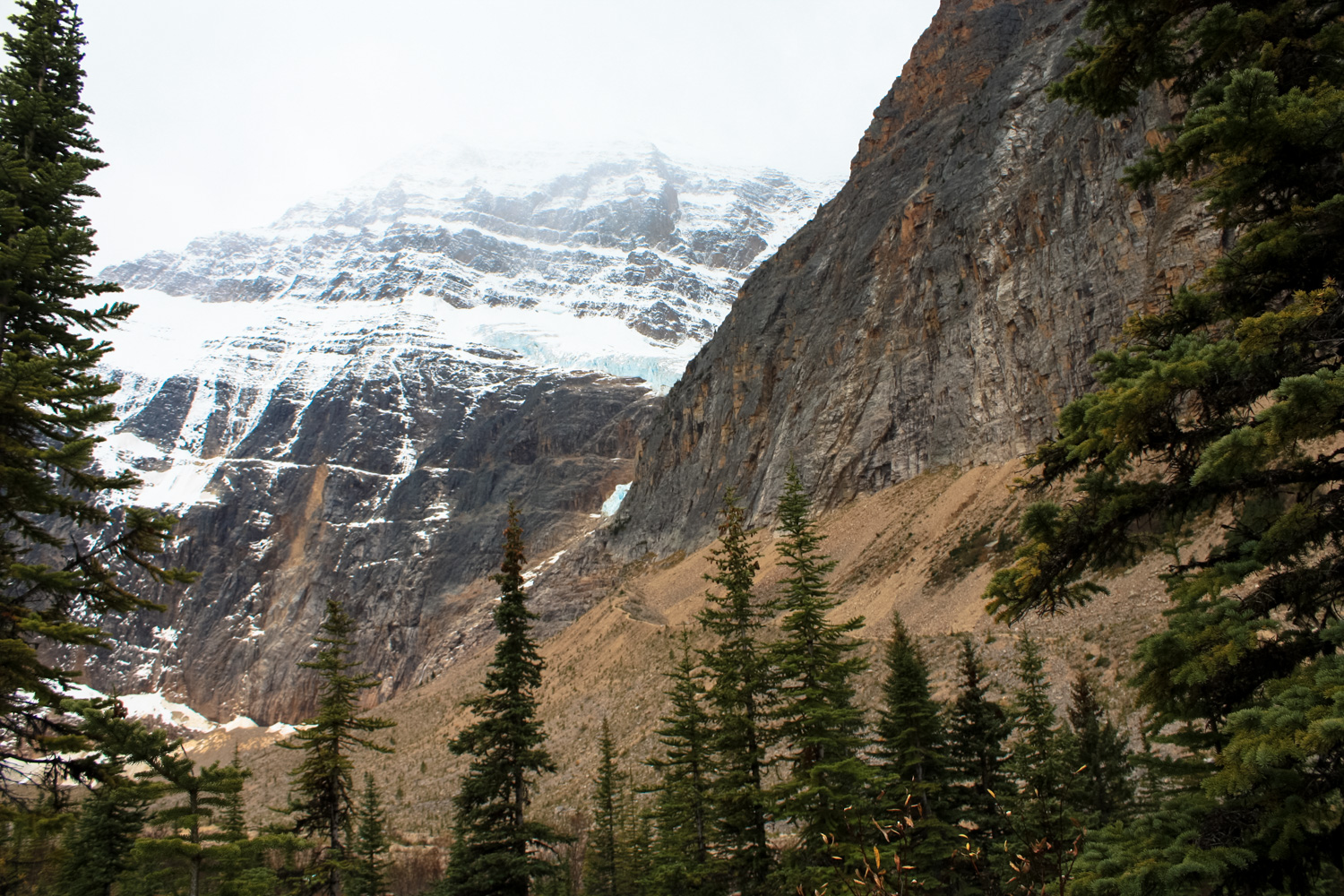 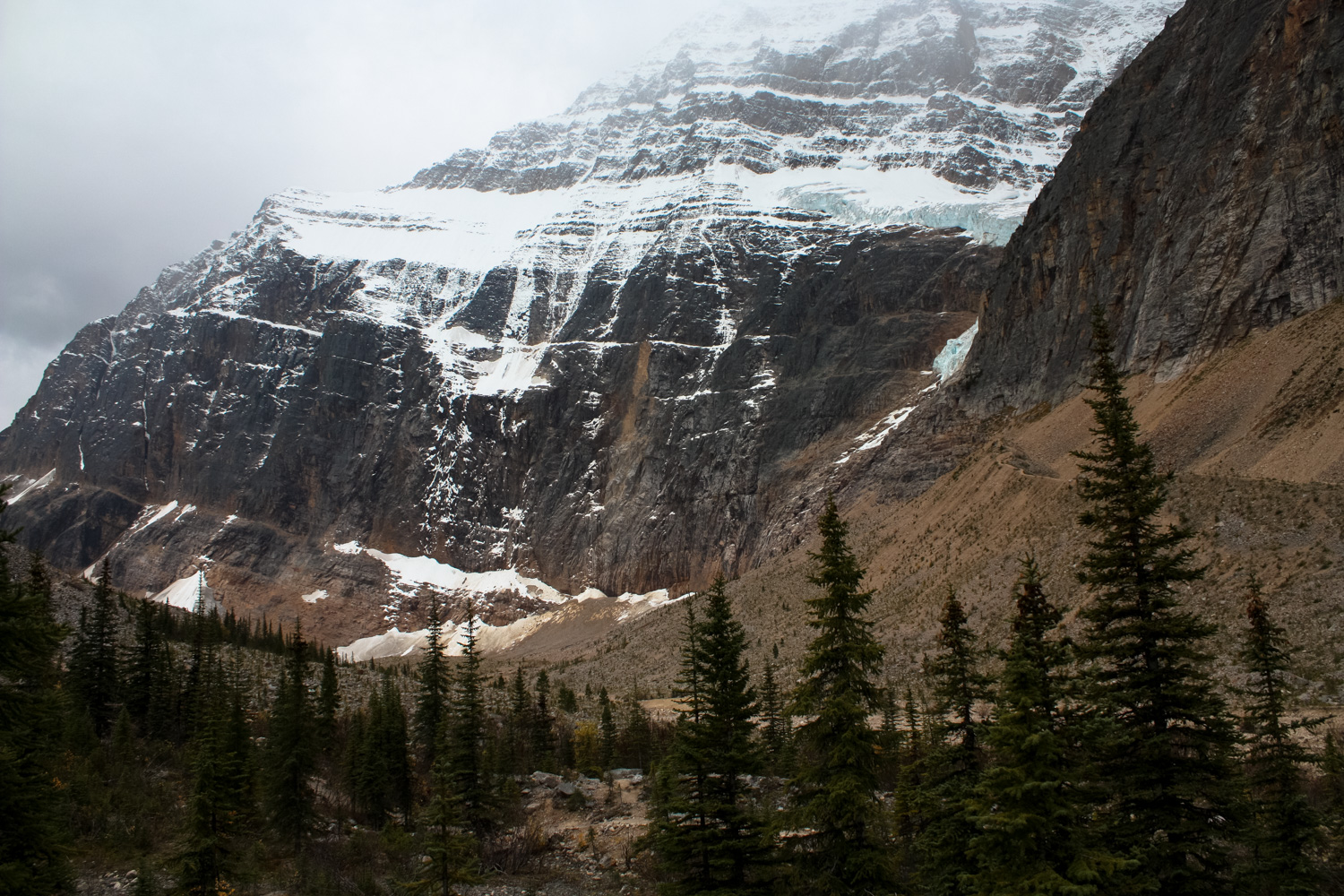 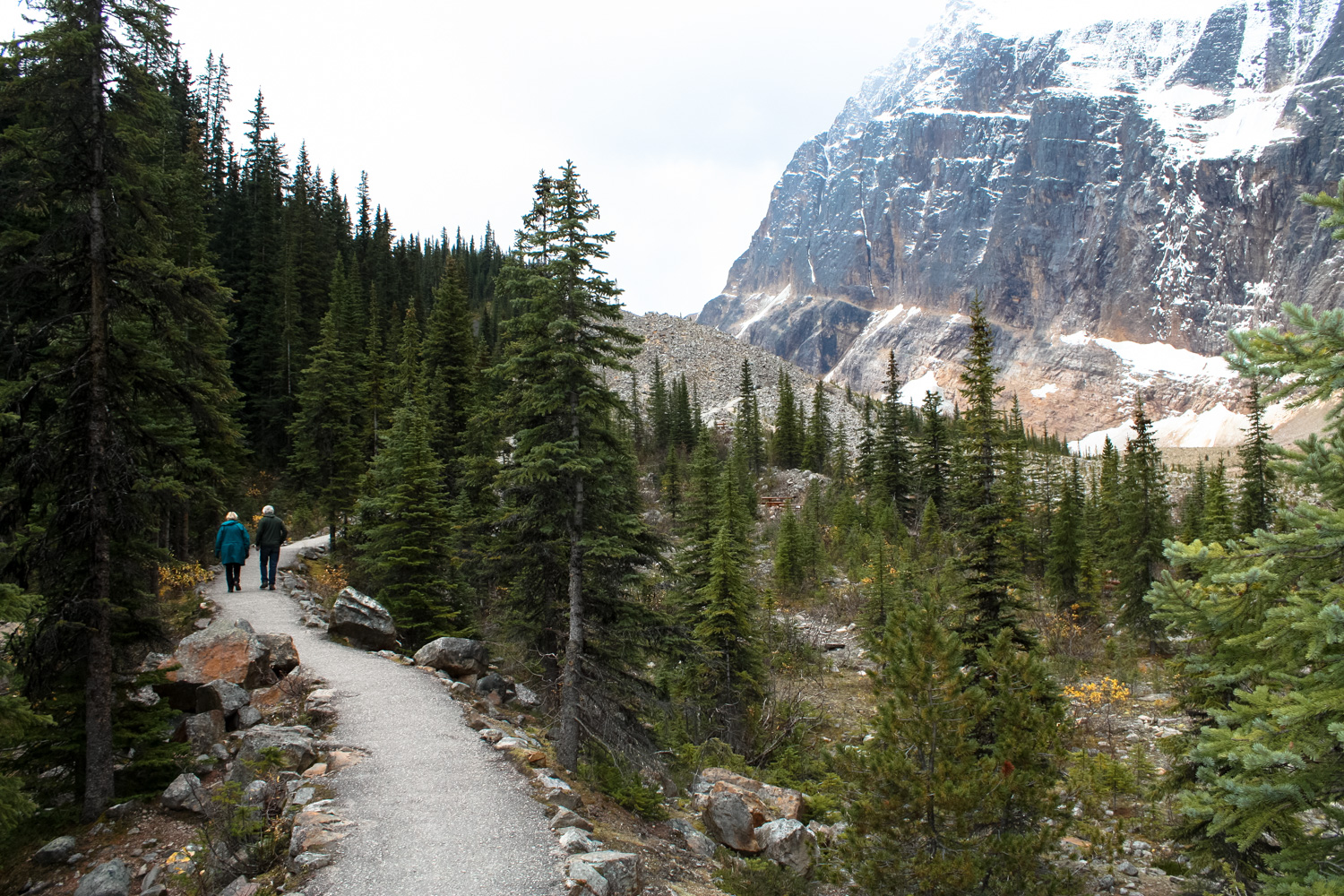 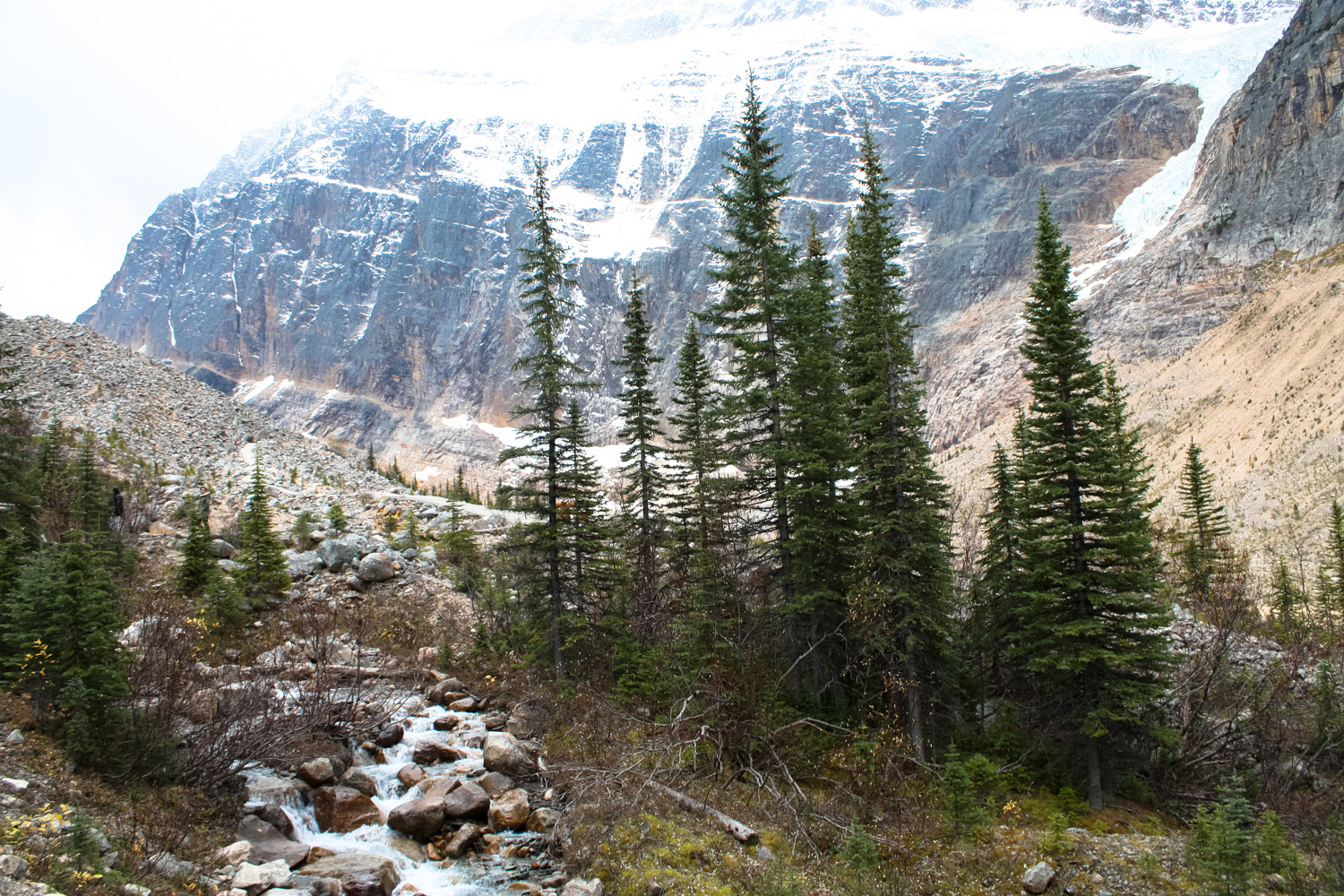 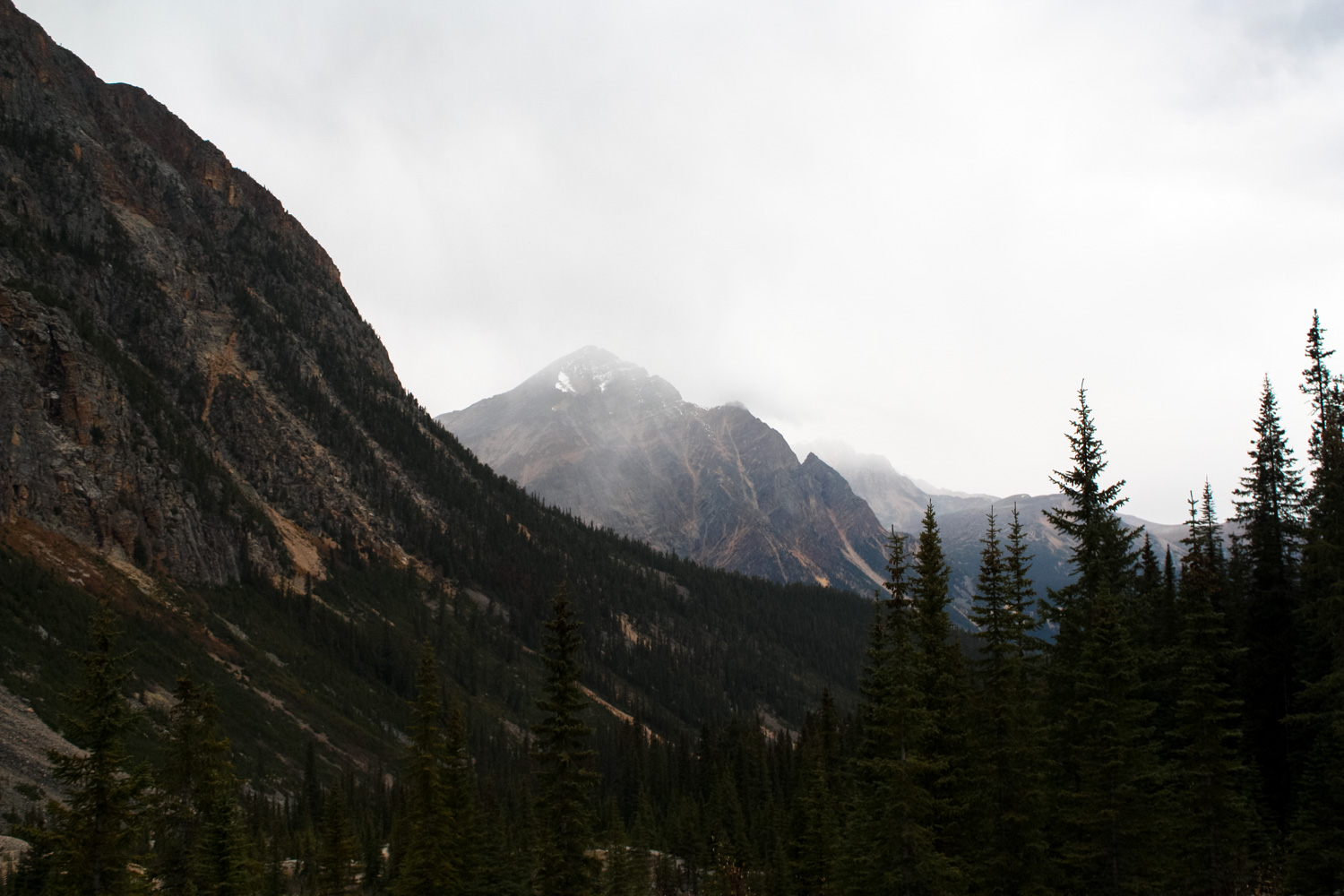 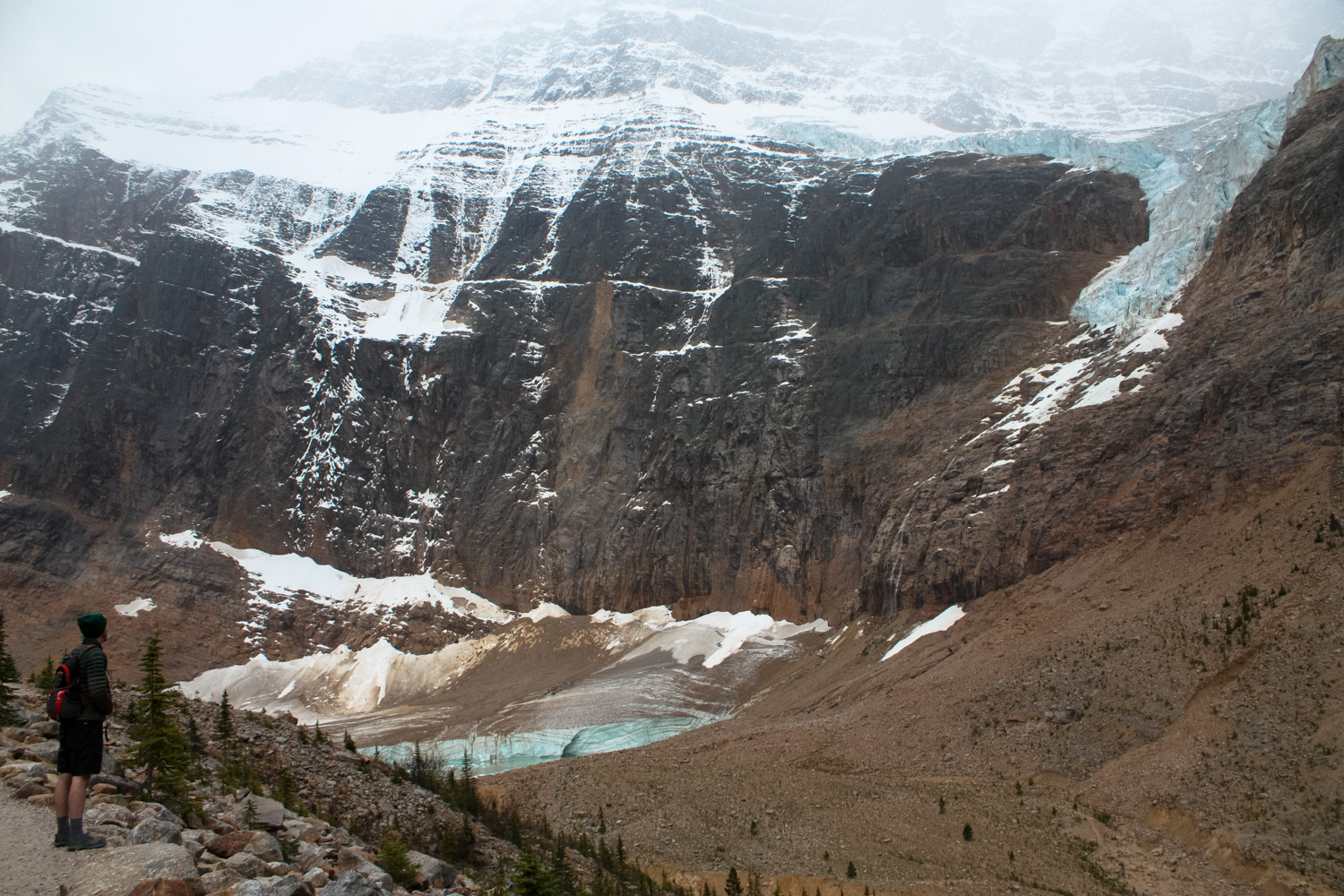 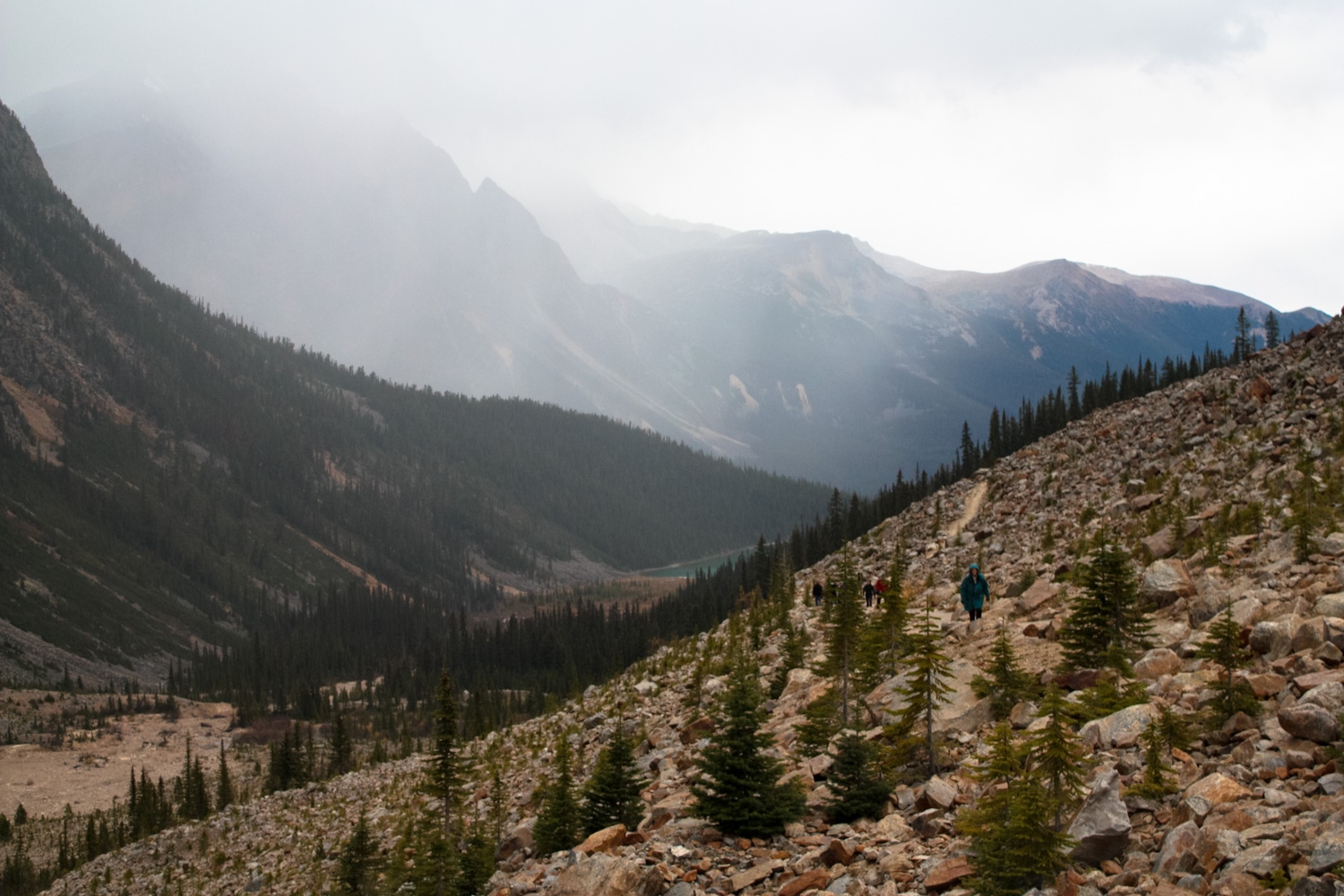 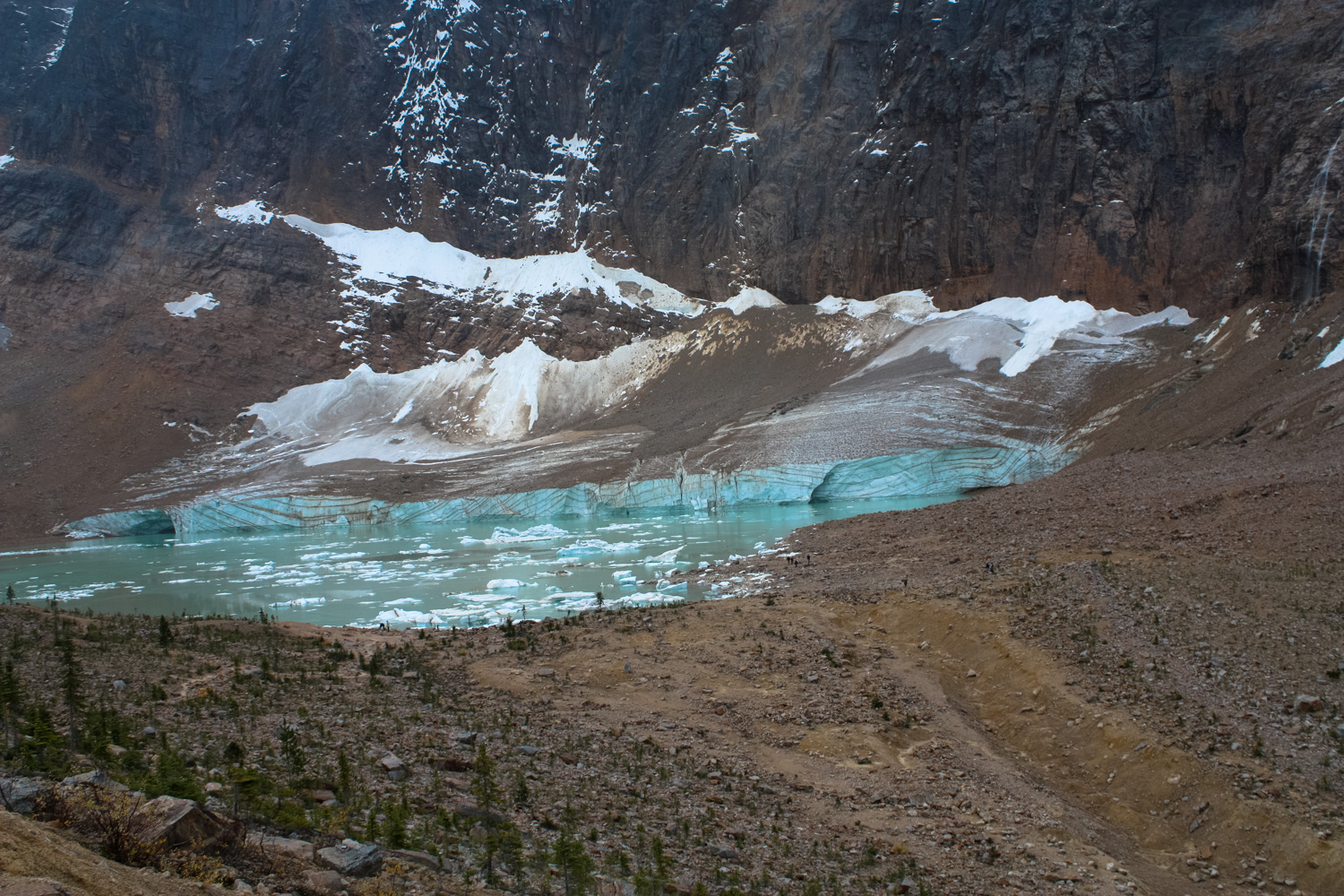 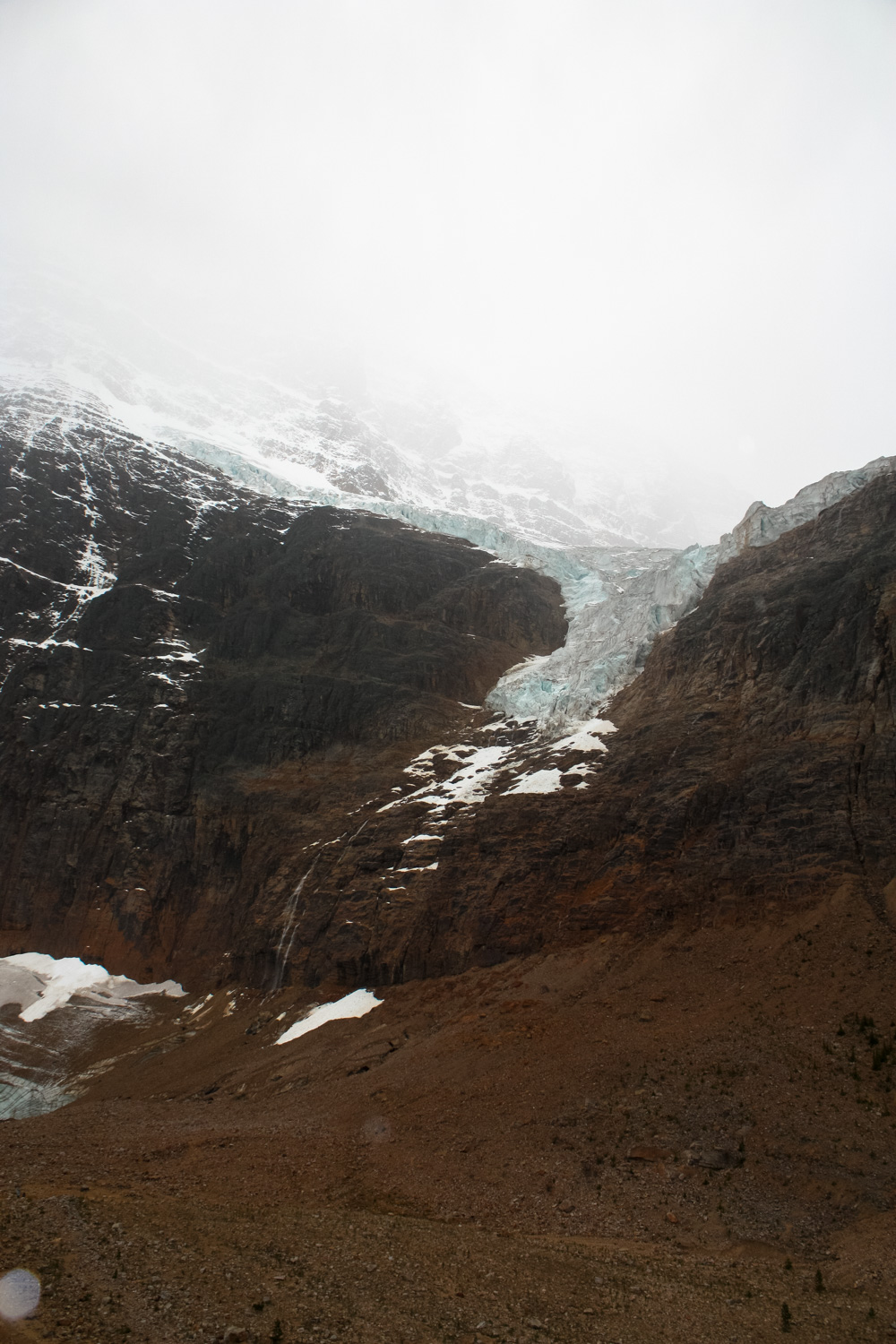 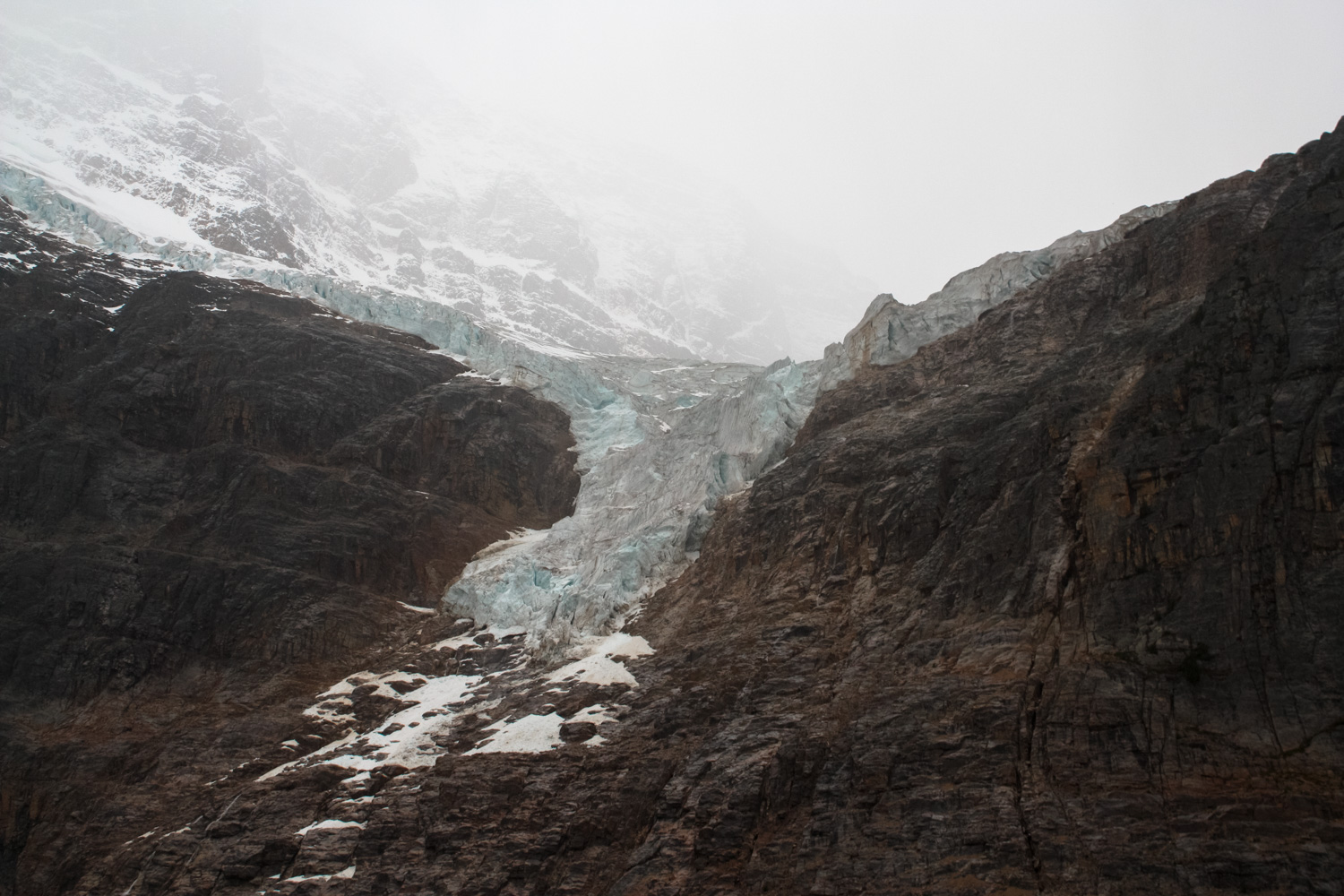 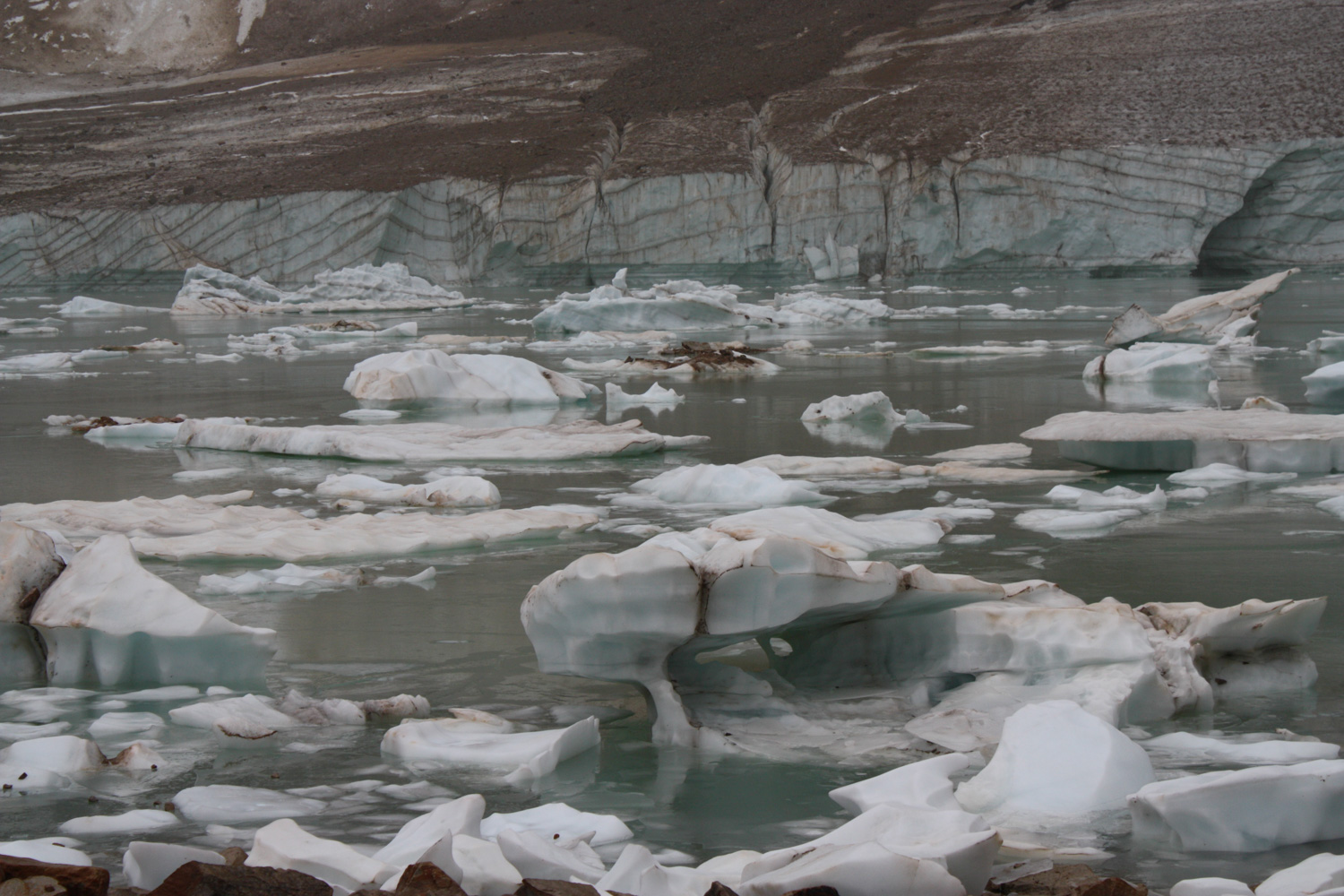 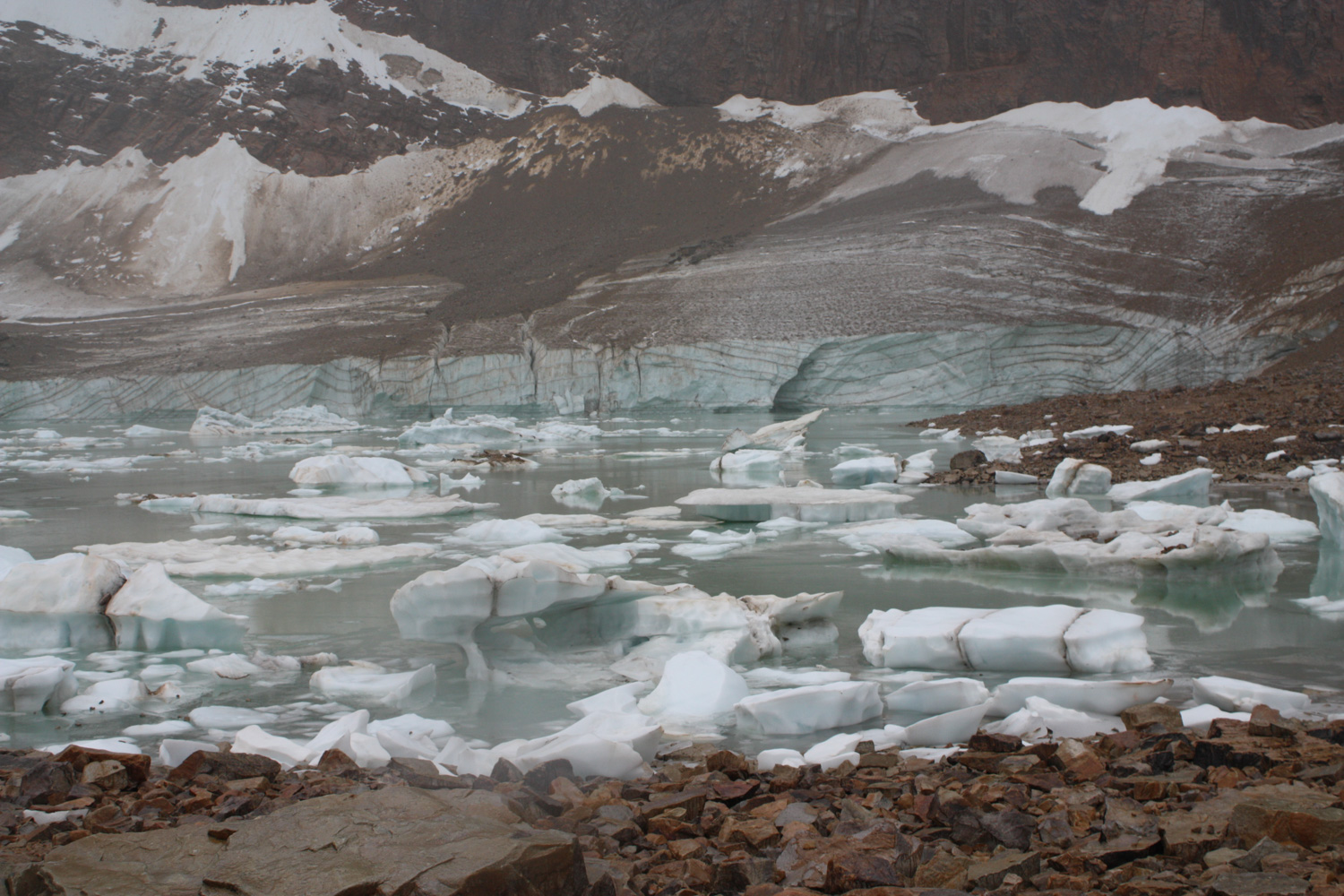 Good. For being relatively remote, this short overlook trail is in great shape and seems very well cared for.

The HI-Mount Edith Cavell hostel is the closest accommodation to this trailhead.

Head south from Jasper townsite on AB-93 S. In 6.7km, turn right onto AB-93A S. In 5.2km, turn right onto a unnamed road (vehicles longer than 7m not allowed). This narrow, winding road continues for about 14.5km and ends at a popular parking area and trailhead. The road is generally open from late June to mid-October. Check with Parks Canada for current road and trail conditions.