A challenging, lengthy, roller-coaster of a hike – this route to Thunder Mountain and Telegraph Peaks offers high alpine elevations, great views, solitude, and great views of the Mount Baldy Area … with lots of potential for side-trails or car-shuttle loops.

NOTE: You will need a free Wilderness Permit to hike beyond Thunder Mountain to Telegraph Peak. Pick yours up at any Forest Service visitor or info center, or stop by the Mount Baldy Visitor Center before your trip. You can also call ahead and have them leave your permit on a message board in case you wanted to get a nice, early start time.

I arrived at Manker Flats around 10:30 or so, a bit later than I’d have liked.

The forecast called for an unusually warm day, and the air was already starting to heat up. Nothing too hot, but definitely warmer than any other time I’d been up in these mountains. They were 100% clear, though, and the sunshine and brilliant blue made for some great views. 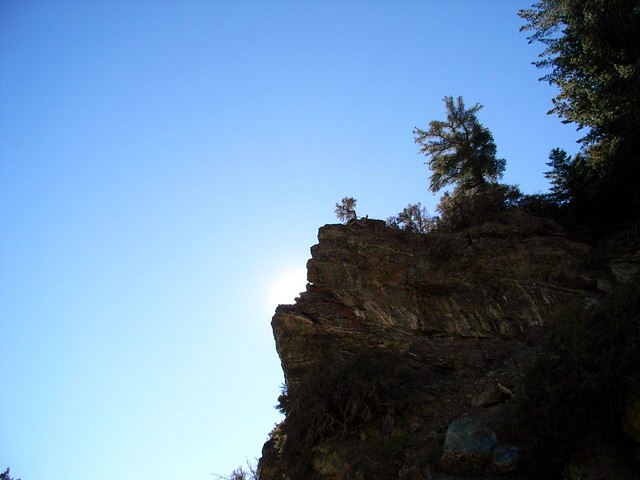 The trail from Manker Flats to Baldy Notch is not a terribly interesting one as it’s all on fire road – but there are short options to visit San Antonio Falls about a half mile along the road – and nice views of San Antonio Canyon as you continue to rise. If you’re hiking, it’s about 3.3 miles one-way to Baldy Notch, but if you’re pressed for time or you can take the Mt. Baldy Ski Area’s Sugarpine Lift, open 8AM to 5PM. Check their web site for current prices and conditions.

From the notch, head to the southeast along the resort’s ski trails – which during the warmer months are essentially wide, spongy fire roads. As you may expect, going up ski slopes is not as easy as going down them on skis. The ground was loose and covered with small boulders, and it was pretty easy to slip on the way up. Although, it being a ski resort did give way to some weird contrasting pictures, like this firing squad of snowblowers, eagerly waiting for the temperatures to drop. 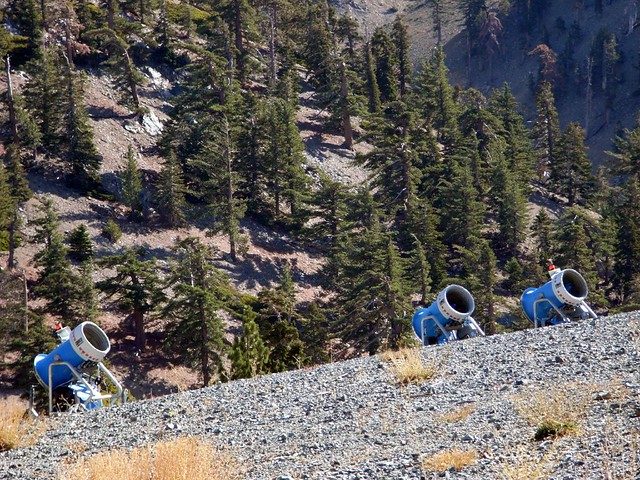 On the trail up to Thunder Mountain, the ski slope / hiking trail wound its way through a ridge between the northeast and southwest sides of the range. The vast desert was on one side, Mount San Antonio and its cohorts on the other. Every time I turned to the right, I was constantly struck by the sheer size of Mount San Antonio. 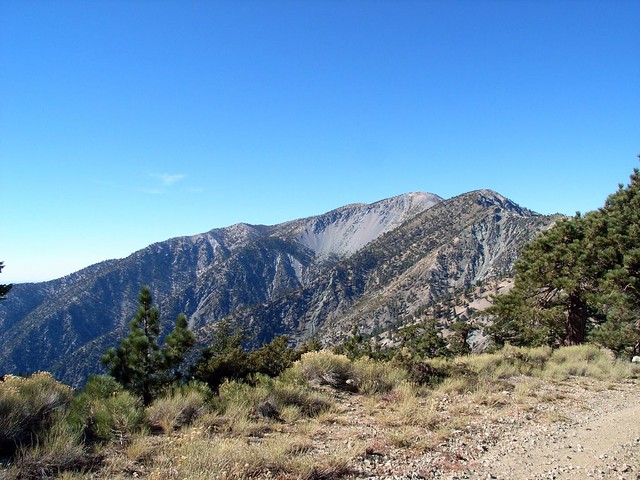 There’s a ski-lift that runs to the top of Thunder Mountain. It obviously doesn’t run during the summer when there’s no snow, which is at least nice because it means you won’t be too worried about crowds at the summit, which you’ll reach about 4.7 miles from Manker Flat. It was basically the end of a ski lift, a small lodge, and some directional signs for other ski slopes. It did have a good view of Telegraph Peak, though: 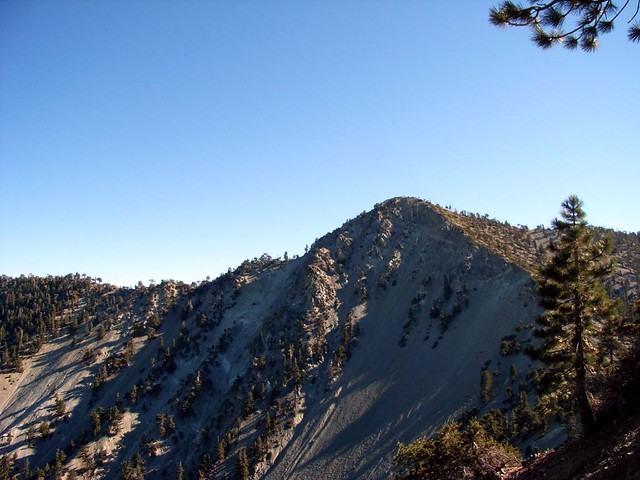 While jotting down my time for Thunder Mountain, I met the only other hiker I’d seen on the trail so far – a Frenchman on vacation. He told me every year he takes his mandatory four weeks of vacation in the States, traveling from National Park to National Park, stopping to hike, camp, and take pictures all along the way. On this trip, he’d started in Colorado, hit up all the Rocky Mountain parks, stopped in Yellowstone, Arches, Joshua Tree, and was ending in the Southern California mountains.

He said he first noticed these mountains when he was flying out of Los Angeles with his family. He told himself he had to hike them, and one year later, here he was. We chatted for a bit about how he was seeing all the nice parts of our country, and probably more than many Americans. We compared National Park lists, and I gave him some suggestions for his next trip to the L.A. area. We both agreed that while it’s sad that people in Los Angeles don’t really realize the beauty that’s in their backyard, it’s better for people like us.

He also a really fun description of L.A. “Los Angeles,” he said, speaking with his hands, “it is … it is a mad city.”

I continued on alone, and past Thunder Mountain the Three Tees Trail finally took on the more rugged and isolated feeling I was looking for. Making my way through pine and manzanita, I descended down Thunder Mountain to a small saddle between the two peaks, Telegraph always in view. This single track trail is a nice contrast to the steep ski trails you’ve been hiking up. 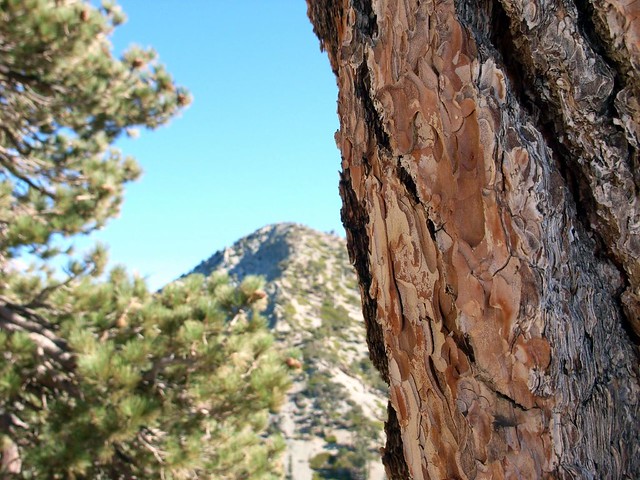 Stay on the trail as it descends to a narrow ridge between Thunder and Telegraph, then makes a few quick switchbacks up. At 6 miles, keep to the left and take the short spur of the Three Tees Trail to the tiny, narrow peak of Telegraph at about 6.2 miles.

After crawling up the switchbacks on the side of Telegraph Peak, the views from the top were amazing. The peak itself is a small rock promontory that offered nearly three hundred and sixty degree views, from the deserts and San Bernardino National Forest past downtown to Santa Monica, the Pacific Ocean, and Santa Catalina Island on clear days. The sun was starting to set, and the Pacific was absolutely glowing. 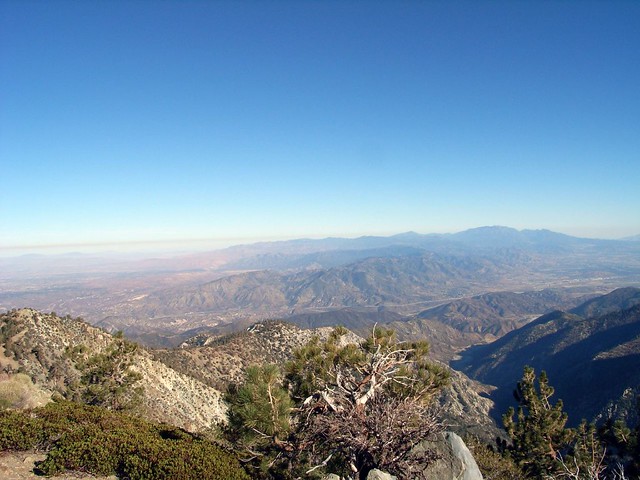 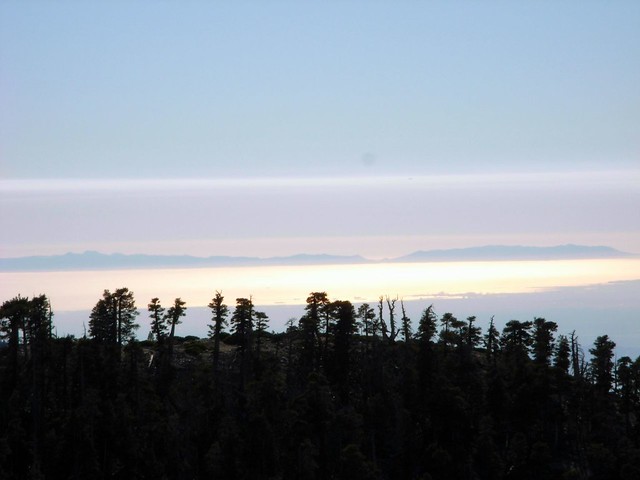 The rock promontory also made a nice built-in chair, and in the direct sun was a great place to relax, eat lunch, and close my eyes and take in the silence and peace of the place. 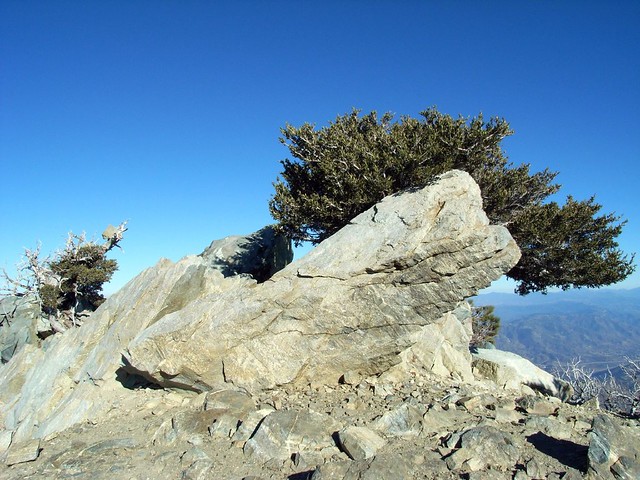 The hike back down was just as beautiful as the hike on the way up, with the setting sun fully illuminating the crags of the mountains and casting long, beautiful shadows through the mountain valleys and across the saddles. 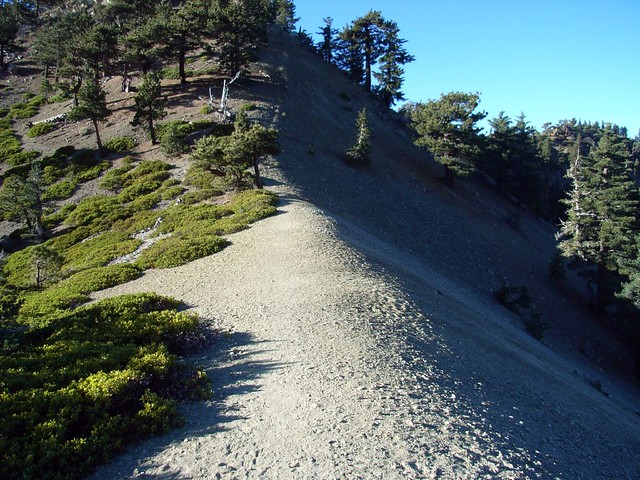 I stopped a few more times on the way out for pictures, including twisted trees, manzanita leaves, and one of my tracks from the hike in — the only footprints on the whole trail.

I did splurge and take the chair lift down from Baldy Notch, as a). it was getting late b). the fire road trail is boring and c). I was tired. Taking it up is cheating. Taking it down is sensible.

I was also forced to pull my car over once on the road out of Mount Baldy Village, because the sun was hitting the mountains just right. Try as you may, you can’t argue with scenery like this. 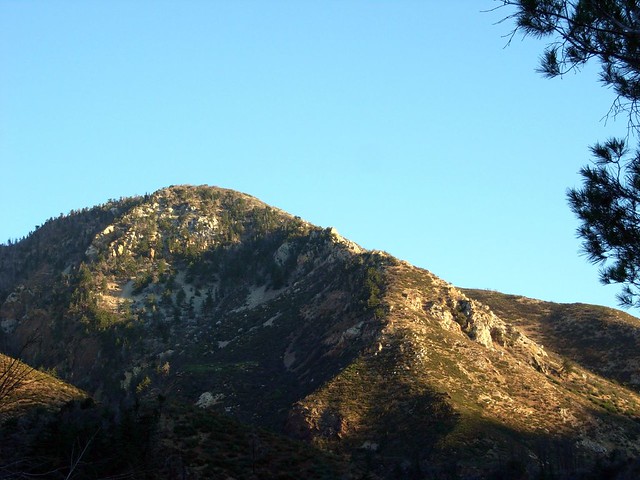 From Baldy Notch, you could make an adventurous (and very strenuous) trip up to Baldy itself. More realistically, you could continue south on the Three Tees Trail past Telegraph Peak to Timber Mountain and Icehouse Saddle. From there, you could hike out of Icehouse Canyon for a car-shuttle, or camp at Kelly Camp and tackle Cucamonga or Ontario Peaks in the morning.

The fire road from Manker Flats to Baldy Notch is wide and very easy to follow. Hiking the ski trail to the base of Thunder Mountain, the ground becomes loose on the incline, and can be challenging. The trail itself winds around the west face of Thunder before a side-spur shoots to the summit. The actual Three Tees Trail from Thunder to Telegraph (and Timber Mountain, beyond) is a much more narrow footpath. It is still, however, in very good condition and well-marked. A free Wilderness Pass is required to travel beyond Thunder Mountain to Telegraph Peak. Pick yours up at any Forest Service info or visitor center or stop in at the Mount Baldy Visitor Center before your hike. If you're hiking this in the winter months, the trail from Baldy Notch to Thunder Mountain is probably going to be a ski slope. Check the conditions before you head out.

Camping at Manker Flats is available during the warmer months. There are 21 first come, first served sites just south of the trailhead for this and many other trails.

From the 210, take the Mount Baldy exit and travel north. At Icehouse Canyon, bear left and continue toward Manker Flats and the Mount Baldy Ski Lift area. Park along the street south of the Ski Lift (or at the Ski Lift if you want to cheat), and be sure to display your Adventure Pass.

Is there any opportunities to do an overnight a top one of the three t's?

hiked the 3 Ts over the weekend. it is weds and my calves are still sore. great 10-12 mile hike, but we ran out of daylight, and car shuttled but left the keys at the other car at the ski lifts

Last week we did Strawberry peak
The scarmble freaked us out a bit...Are there any other hikes close to san gabriels that we can try that are difficult around 13 miles without a major scramble...is Fox Mountains scramble more difficult than strawberry peak? Please send me an email We are addicted to this and want more. we have done san gorgonia, lukens, condor peak...dawn mine. help us find something challenging but honestly we are not quite ready for the rock sections....Beau