Ever wanted to see what happens when a new volcano erupts next to an older one? At Sunset Crater Volcano National Monument, Lenox Crater is a quick roadside climb to the ash-filled Lenox Crater, providing an up-close and personal experience with volcanic rock and some excellent views of the nearby San Francisco Peaks and Bonito Lava Flow.

Sunset Crater Volcano National Monument sits atop the San Francisco volcanic field – a hot spot in the earth’s mantle that is prone to increased volcanic activity. Basically, a location like this is a weakened area that allows a magma flow to reach closer to the surface of the earth, and as plate tectonics moves the surface, new volcanoes emerge in a string. Here, the first eruption occurred some 6 million years ago near present-day Williams, Arizona. Over time, the band of volcanoes rose and “migrated” eastward. Sunset Crater is the youngest volcano in this band and is one of the youngest scoria cones in the Lower 48. For more on the Sunset Crater eruption, see the nearby Lava Trail.

But before Sunset Crater hit the scene, nearby Lenox (Mountain) was its own volcanic hotspot, rising above the plains. But when Sunset Crater erupted, the ash and other volcanic debris filled in most of Lenox Crater.

Today, hikers can no longer hike to the summit of Sunset Crater due to excessive erosion, but a single trail does climb up to Lenox Crater. Look for the sign marked, naturally, “Lenox Crater” near the road and begin heading due west.

The trail rises quickly through a dense grove of ponderosa pine, but the main thing you’ll notice is the ground: a black, fine gravel that your feet will sink into and slide back on as you climb. 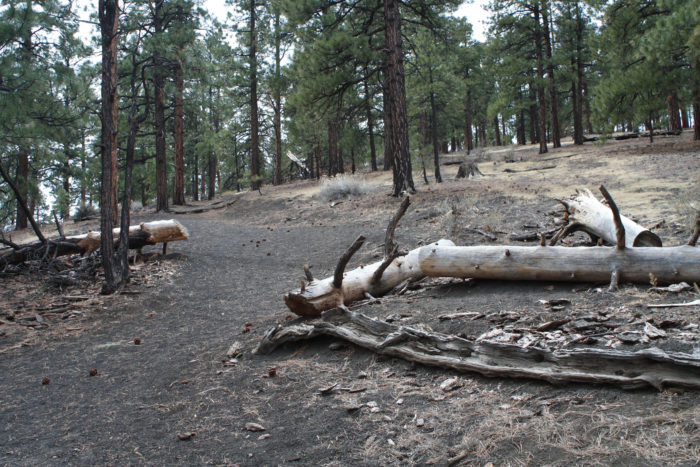 That ash is everywhere, and the main reason why this otherwise fairly easy hike is often listed as “strenuous” in park guides. While you may be cursing it on the way up, rest assured that on the way down it’ll be nice and easy on your knees.

The trail continues heading mostly west until about 0.1 mile, where it makes a sharp turn toward the south. As far as you’re concerned, though, it’s just up up up. 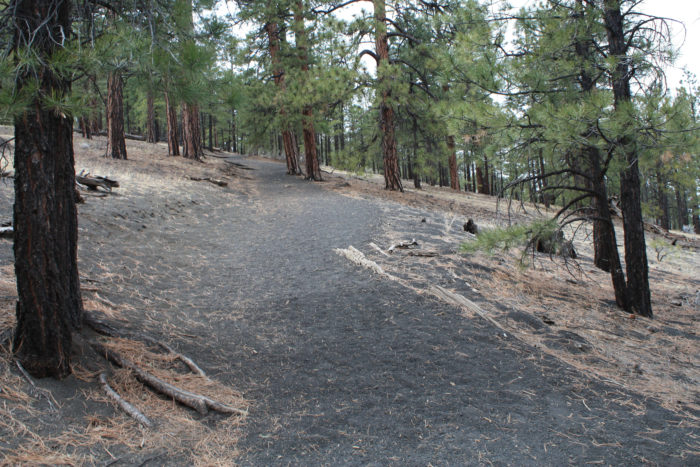 The trail bends to the southwest and at 0.2 mile you’ll hit a really steep incline. From here, it’s just west to the edge of the Lenox Crater itself. 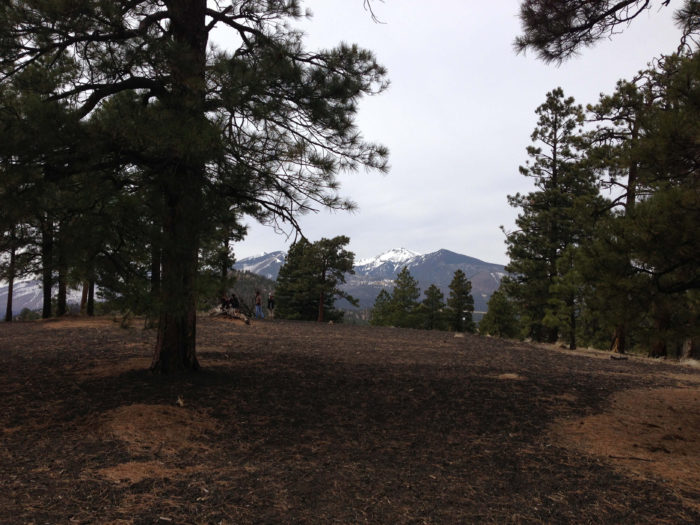 looking back toward the San Francisco Peaks

The crater itself isn’t much to look at — which can disappoint those expecting an epic, blasted out hole in the ground. Because the crater has been filled with debris from other eruptions, the crater has the look and feel of a gently sloping valley surrounded by a lip of peaks. You can descend into the crater if you’d like, just remember that you’ll have to climb back out on that slippery volcanic gravel.

A better reason to hike this trail are the views of the San Francisco Peaks and nearby Sunset Volcano, all of which are visible through the trees.

southwest toward San Francisco Mountain over the lip of Lenox Crater 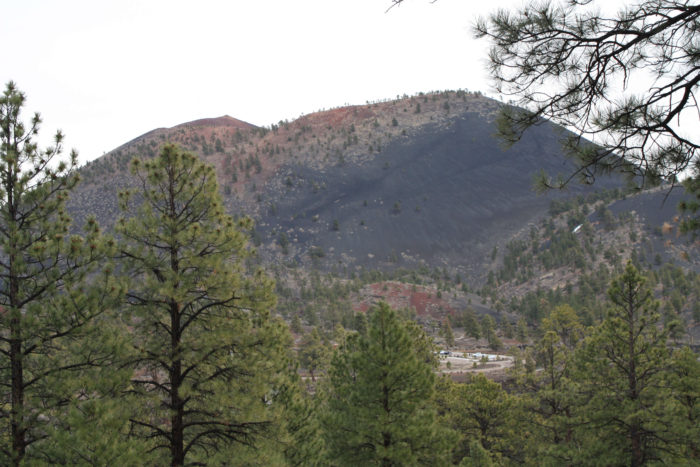 Sunset Crater. You can still make out the scars of the old hiking trails on the slope.

When you are done, return back the way you came. We strongly suggest adding on the nearby Lava Flow Trail, and if you have time you can peer into the top of Sunset Volcano from nearby O’Leary Peak as well. 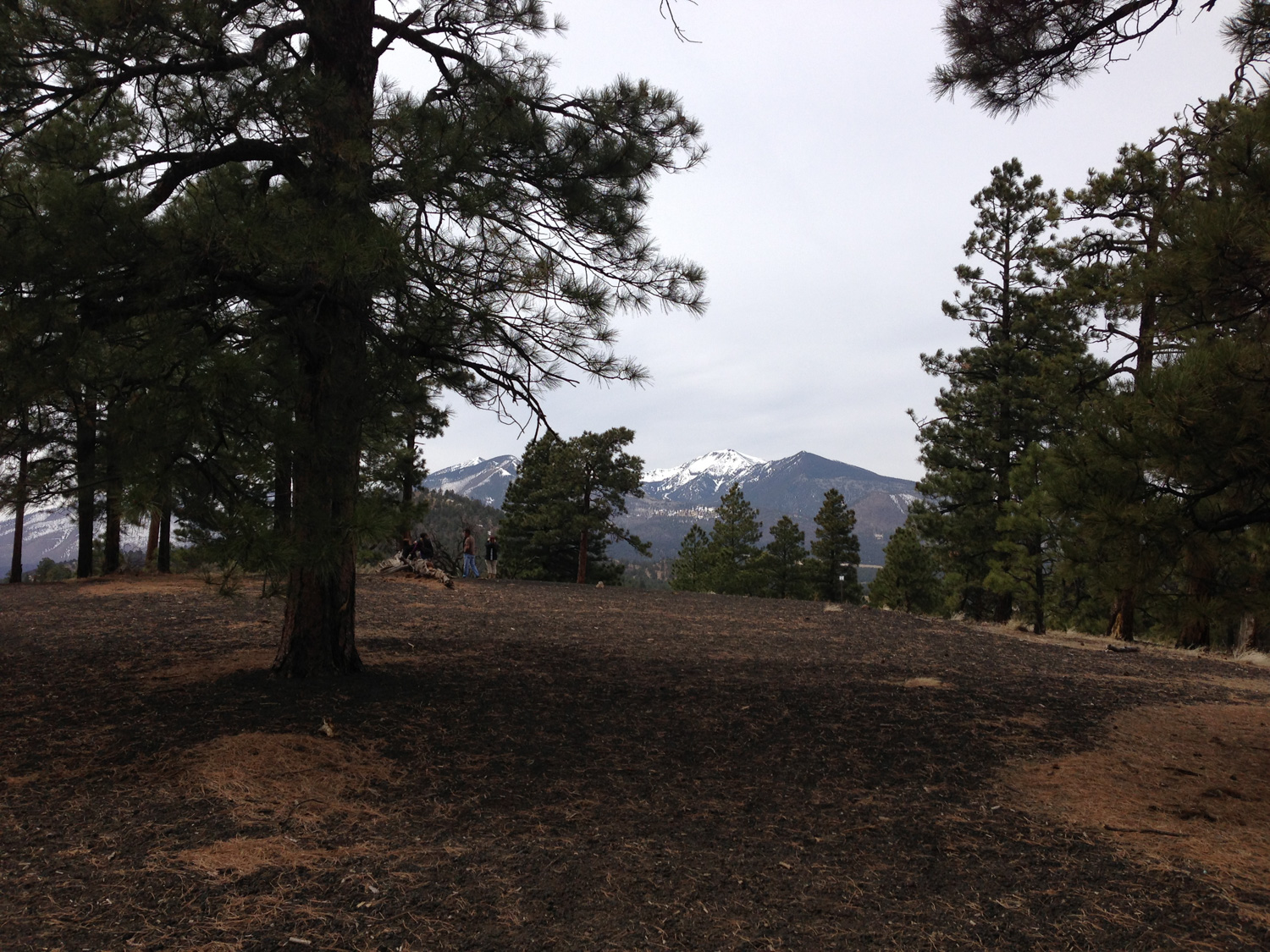 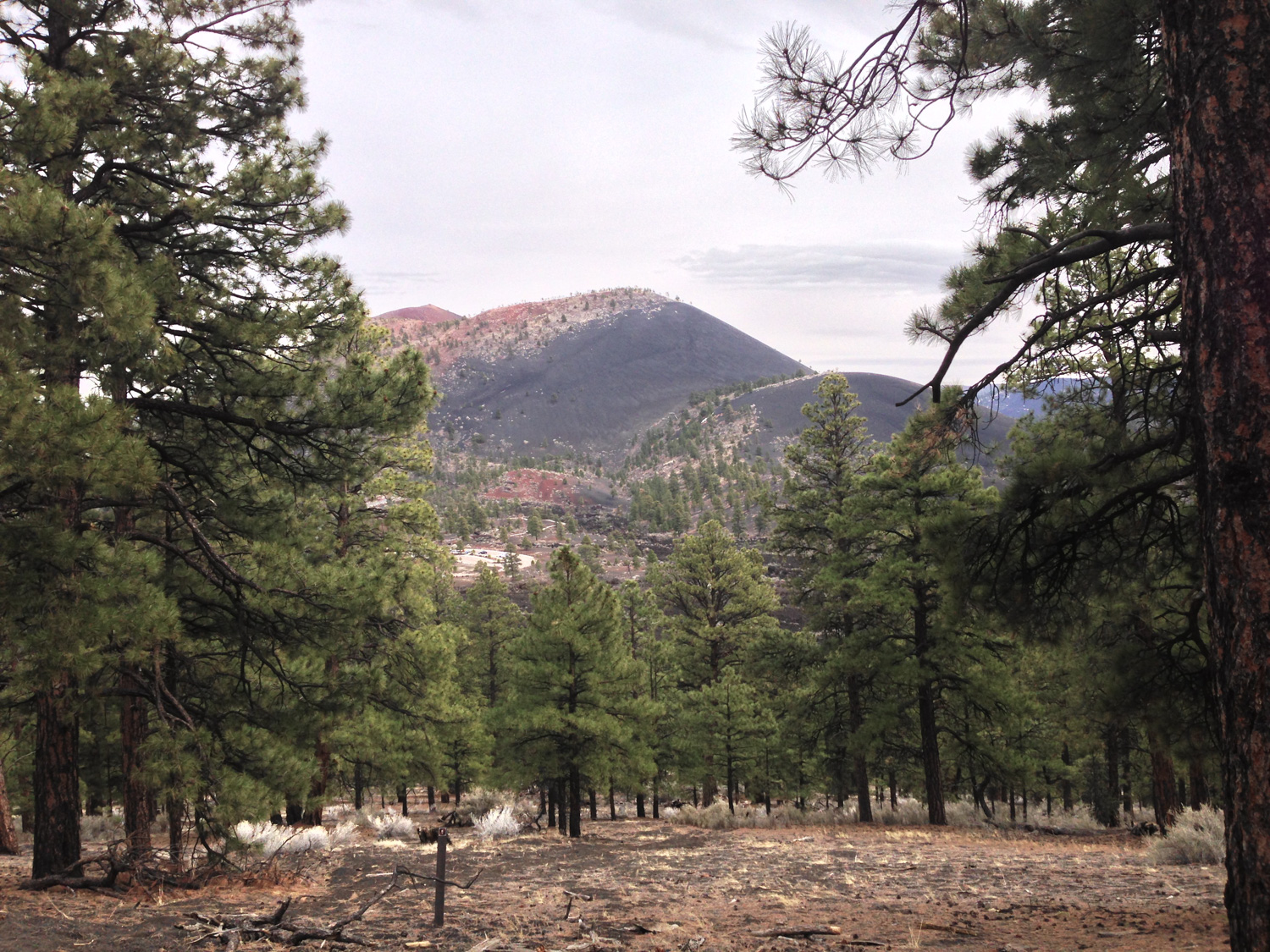 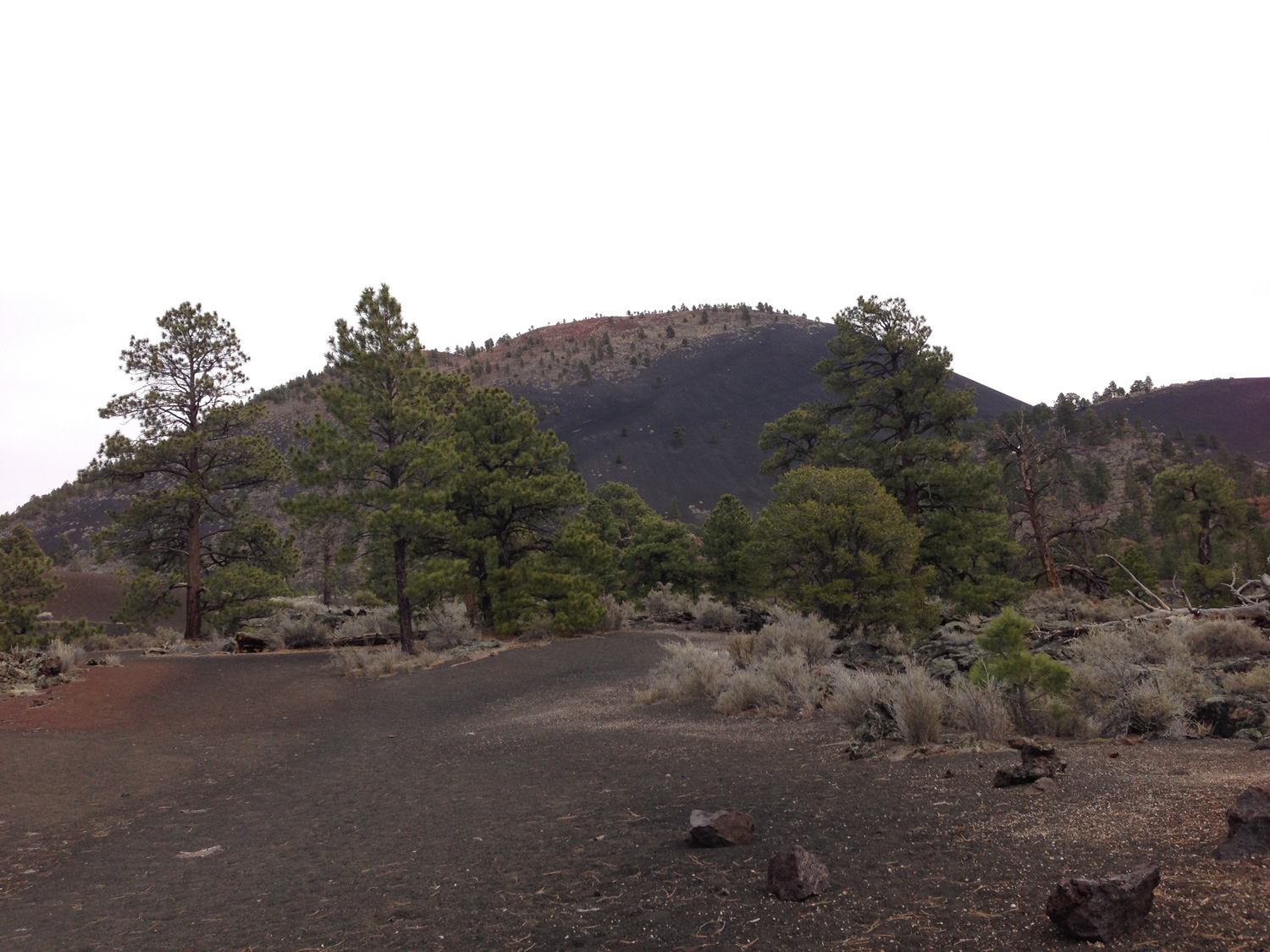 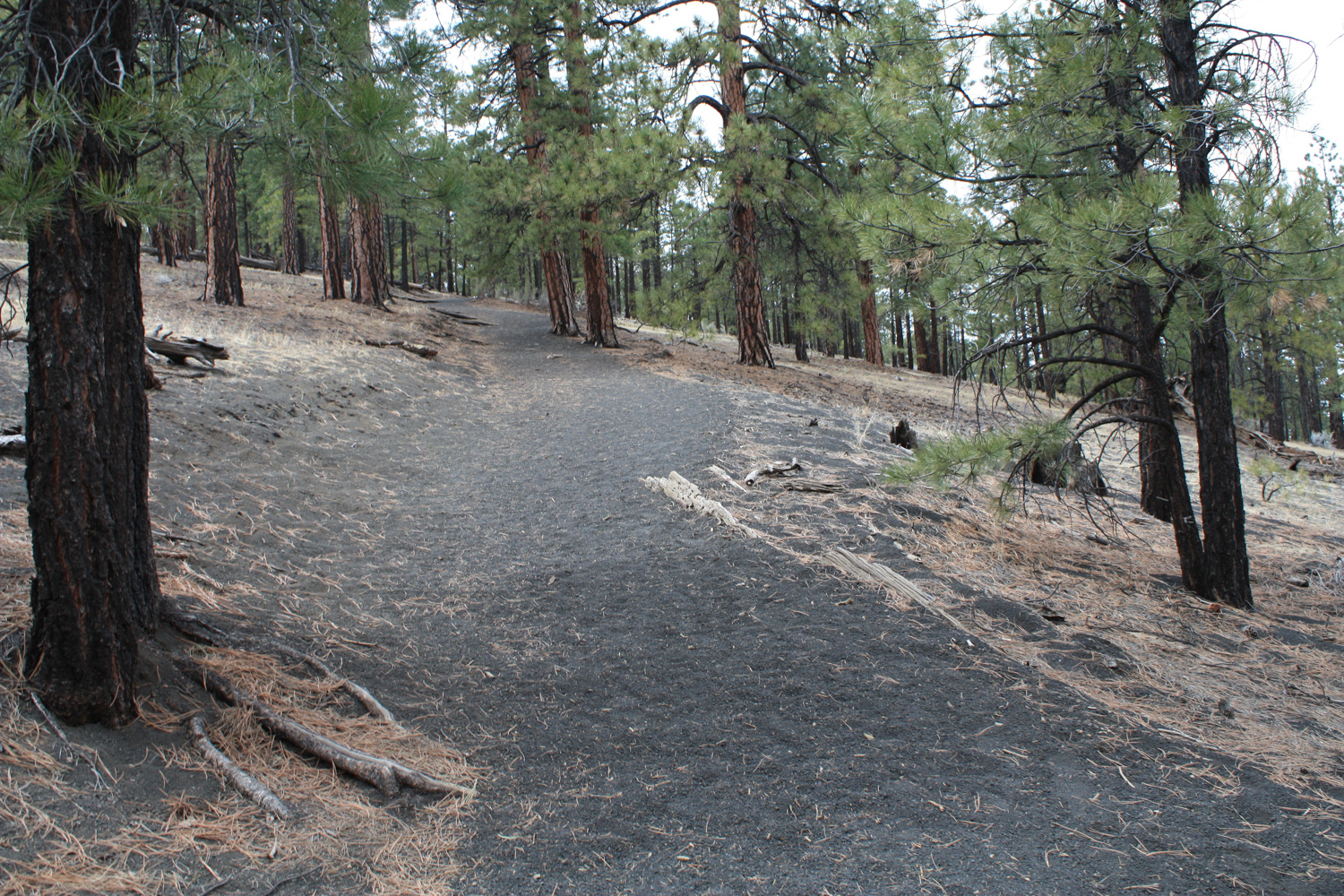 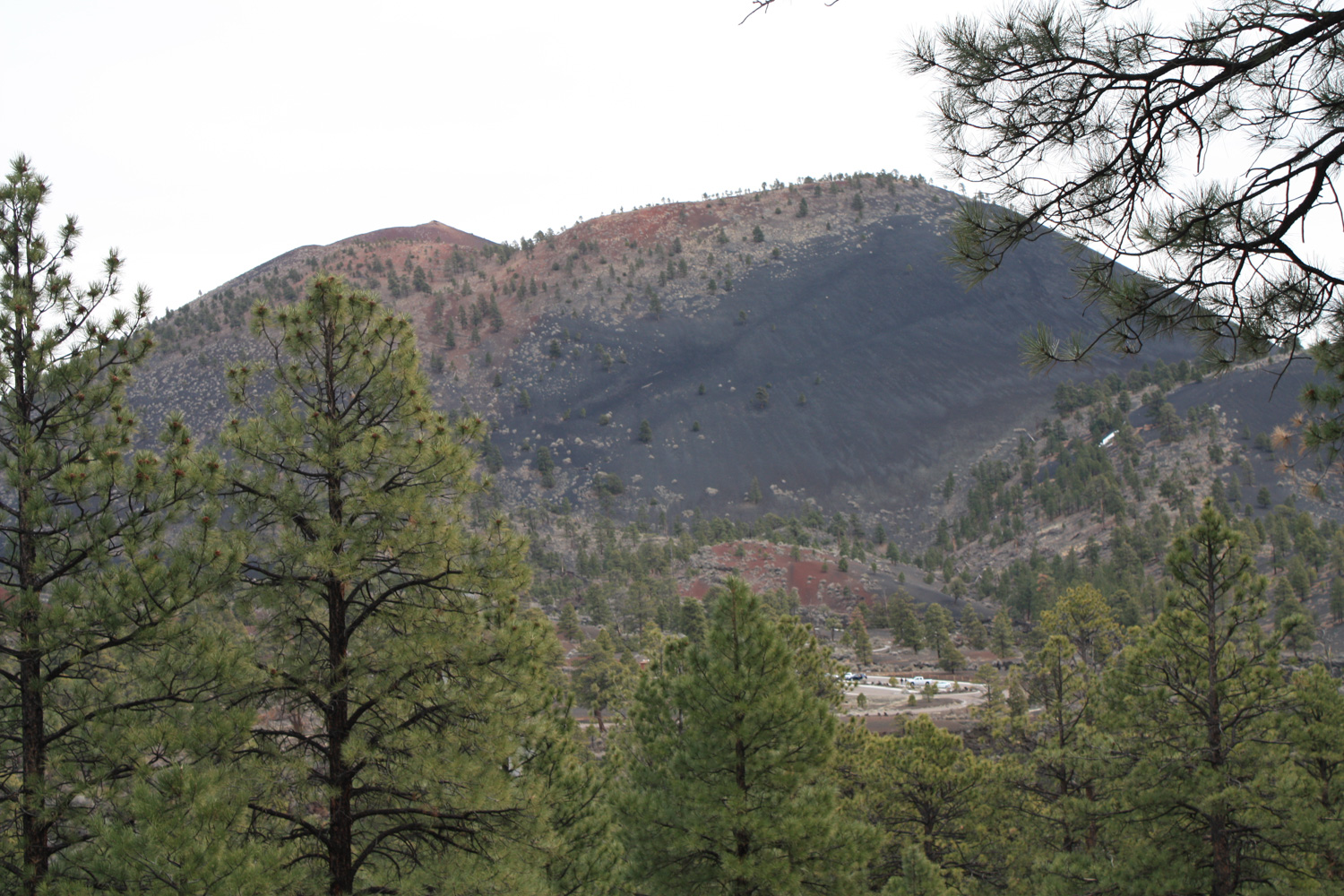 The trail is generally in good condition, but there are sections where the trail markers can get lost and you may find yourself meandering off the established route. Note that the entire route is uphill on loose volcanic cinder gravel, which can be a challenge to climb up.

Bonito Campground is usually open from May through October. The campground is near the Sunset Crater Volcano National Monument visitor center.

From Flagstaff, head north on US-89 for 11.9 miles past the junction with US-66. Continue on Loop Road for 3.3 miles, passing the Bonito Campground and visitor center. The trailhead is on the south side of the road.