A breathtaking 9.3 mile loop through most of the big sights in Pinnacles National Monument. This trail crosses streams, dives into talus caves, and climbs around and through the monument’s namesake rock spires – in several places, even climbing up stairs cut into the sides of the pinnacles themselves. In the spring, this trail explodes with wildflowers. This is the must-do route in the park.

Pinnacles National Park was never on my radar before, but a some recommendations from Calipidder and Stuart from Trailspotting, combined with some time off of work put me on the highway up north to see the bay area wildflower show — and I was not disappointed.

Pinnacles National Park itself is a pretty small park. You can really hit most of the major trails in a day, and in two you could conceivably cover every mile of trail in the park — but don’t let the Park’s size or relative isolation fool you into thinking this is just some wayside oddity — this park offers some top notch hiking, rock climbing, caving, bird watching, and incredible landscapes that should definitely bump it to the “must see” section of your list if you’re in the area.

The “High Peaks Loop,” as described here, starts in the eastern end of the park and does a full loop through some of the highlights — the rolling hills and riverbanks on the Chalone Creek, the jagged volcanic pinnacles that lend the park its name, a steep and narrow section of the High Peaks Trail in the center of the park, the riparian canyons on the park’s west end, and the Balconies Cave (and / or Cliff Trail). If you only have time to do one route in Pinnacles, this is it.

Please note that some maps show CA-146 going through the entire park running east to west. It is not possible to drive this route through the park.

The trail starts at a small parking lot at the end of the Pinnacles Highway, accessed from the main eastern entrance. Almost immediately, it crosses the Chalone Creek, where you should double back south on the Bench Trail for about 1 mile. Here, the trail is flat, shaded, and – if you’re lucky, coated in wildflowers of all shapes, colors, and sizes. 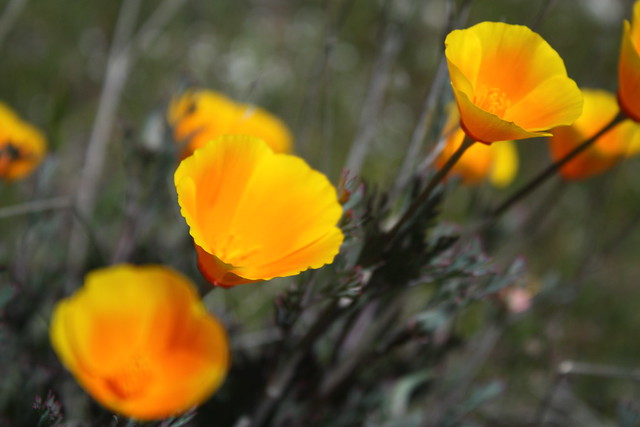 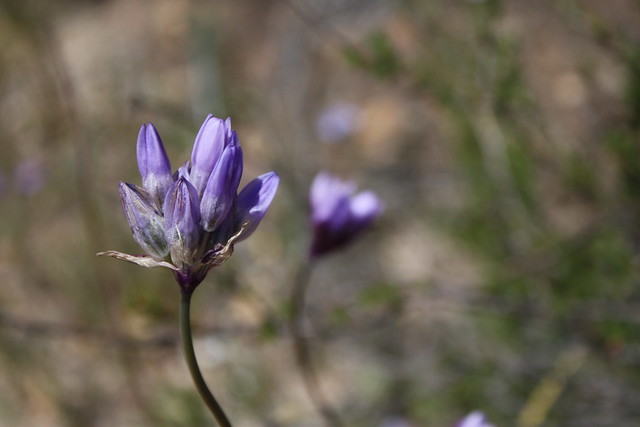 At the mile mark, turn right onto the High Peaks Trail, which immediately starts switchbacking up a canyon as it climbs west. As of yet, you still won’t have seen a single pinnacle formation, but if the grass is green and the flowers are out, you won’t care … and you may even think you’ve wandered into a Ricola ad. 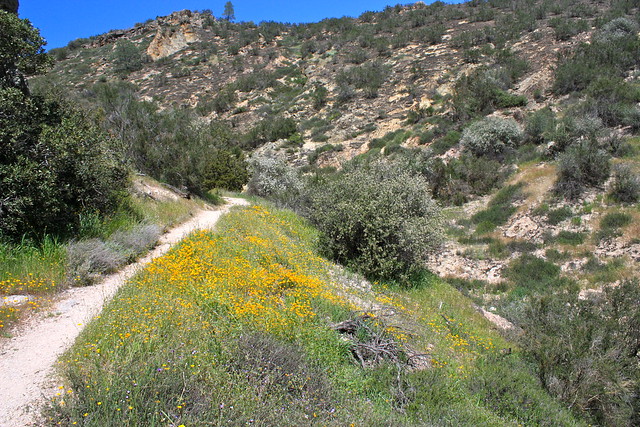 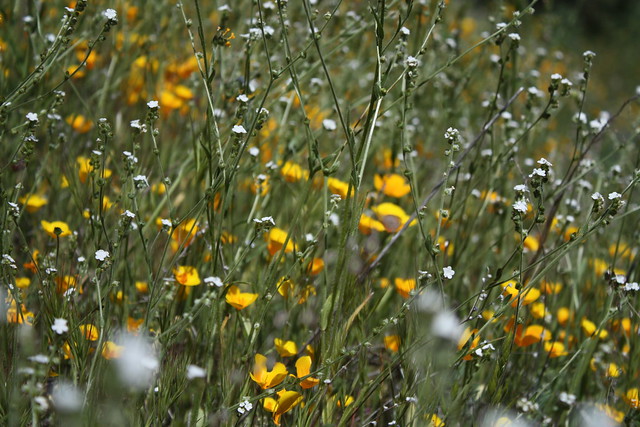 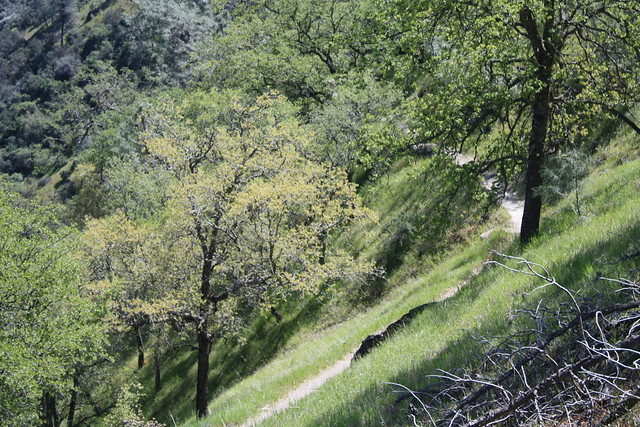 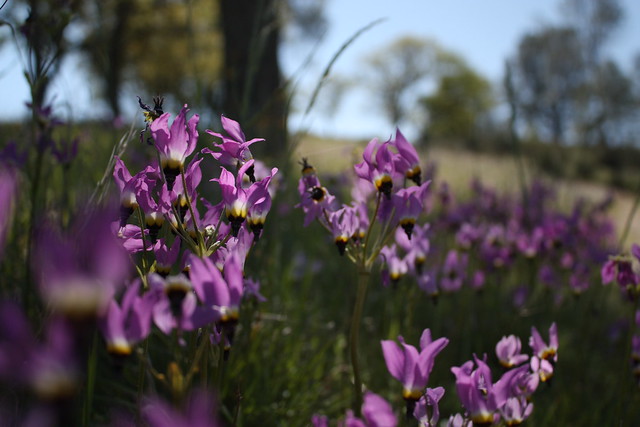 At about the 1.4 mile mark, you’ll finally start to see the bizarre pinnacles formations, which look like they’ve just torn through the surrounding landscape. These pictures don’t really do the formations justice — they are huge and quite awe-inspiring in person. 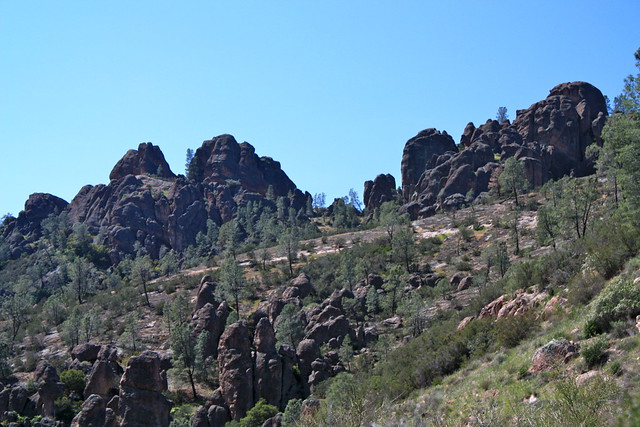 The pinnacles are such a striking contrast from the rolling hills of the rest of the area that you’ll probably have to stop to stare and wonder how they got here — and the story, like the formations themselves, is fascinating and strange.

The jagged rocks you’re looking at here are the remnants of the Pinnacles Volcano, which was born 22-23 million years ago … near Lancaster, CA. The volcano grew to about 8000 feet – but tectonic action elsewhere snapped the ground and the San Andreas Fault was formed directly underneath the volcano. Over time, 2/3rds of the volcano was dragged 195 miles northwest – and the movement and erosion formed the Pinnacles we see today. 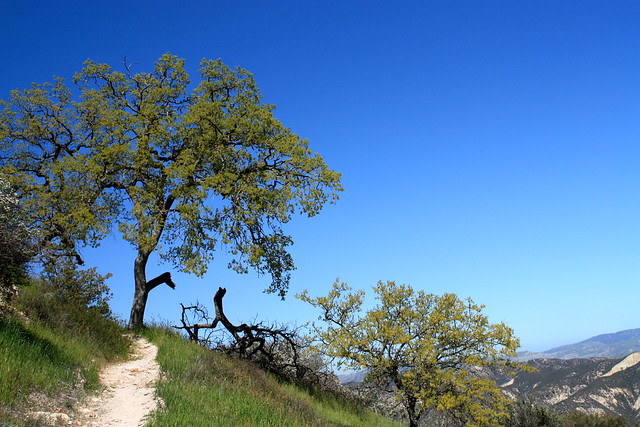 On the 0.6 mile stretch between the last junction and the upcoming junction with the Tunnel Trail, the path winds through some of the most impressive and massive of the pinnacle formations. Here, going off-trail may be prohibited at times, depending on the nesting of the California Condors. 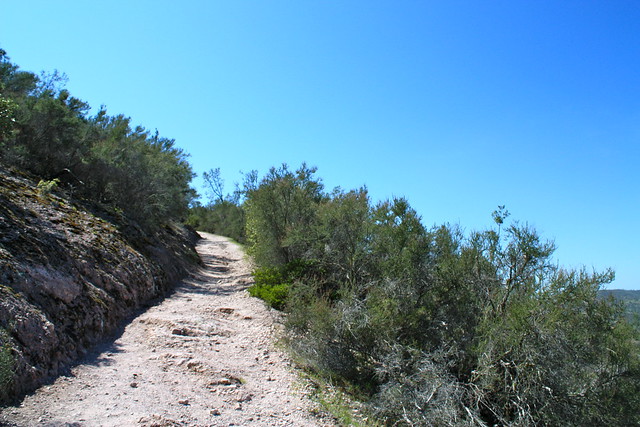 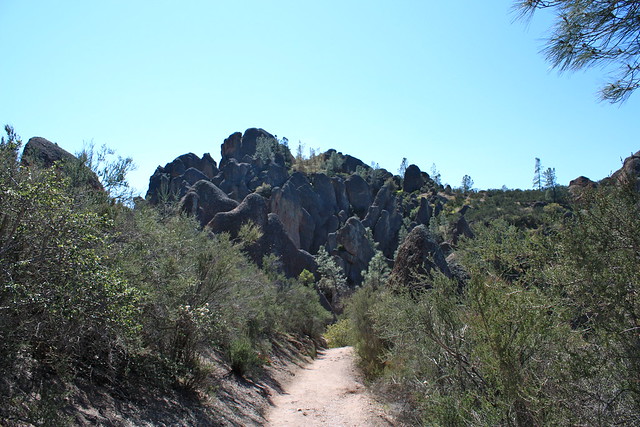 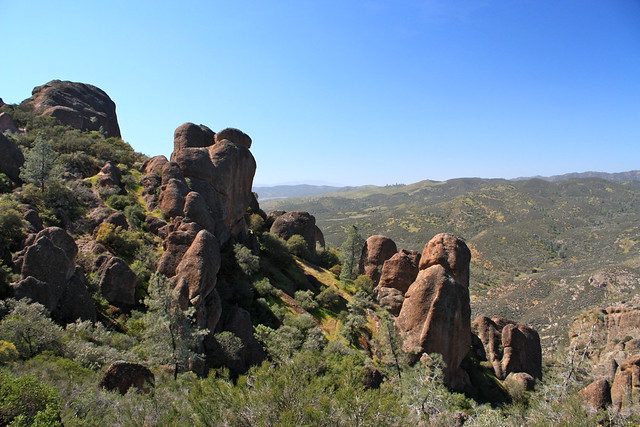 At the junction, you can either take the Tunnel Trail 0.6 miles to the Juniper Canyon Trail or walk past the “Steep And Narrow Trail!” warning signs and stick with the High Peaks Trail. This second option is highly recommended. The scenery is breathtaking, the trail itself is adventurous, and there are handrails along the more dangerous parts of the route so it’s not really all that bad. 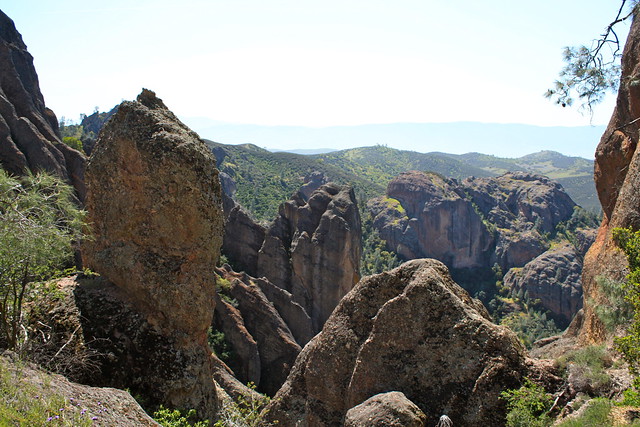 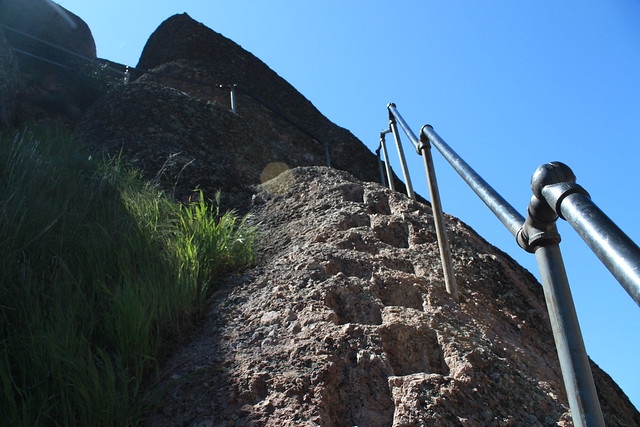 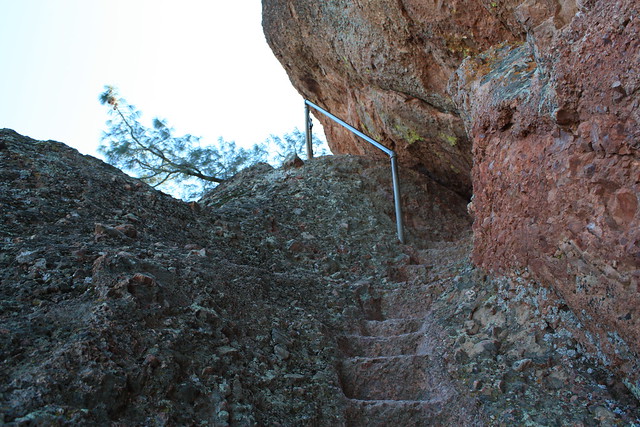 After you’ve had your fill of cliffside sights, the trail drops you off at the Juniper Canyon Trail, where there is a bench and a small outhouse. 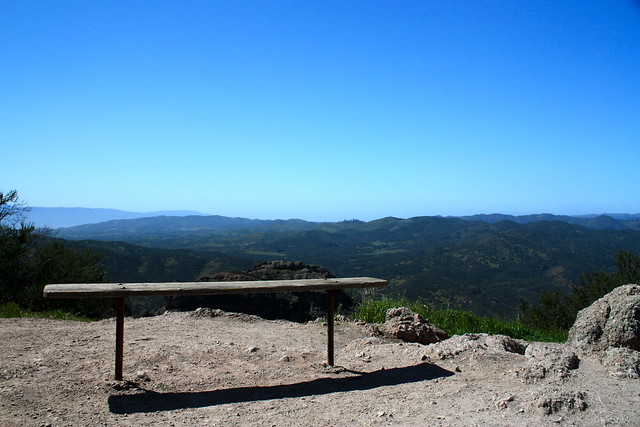 Veer to the right at the junction to descend on the Juniper Canyon Trail, which will make its way to the Chaparral Ranger Station at the West Entrance in 1.8 miles. Here, the trail comes out of the jagged mountains and switchbacks into some pleasant, stream-lined canyons. When I went, it was a prime location for wildflowers. 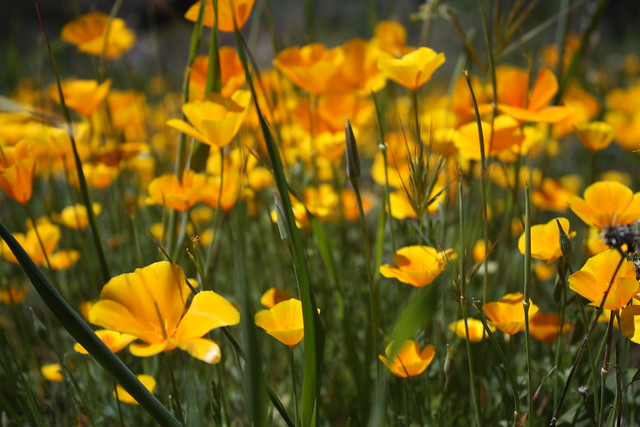 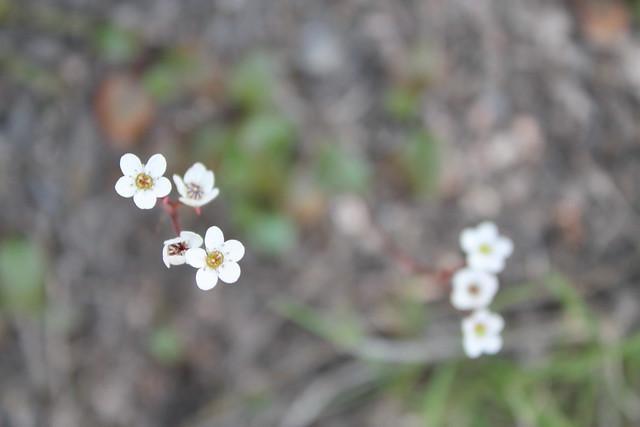 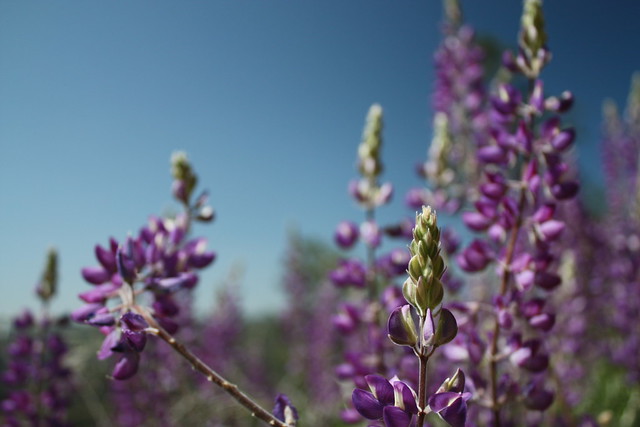 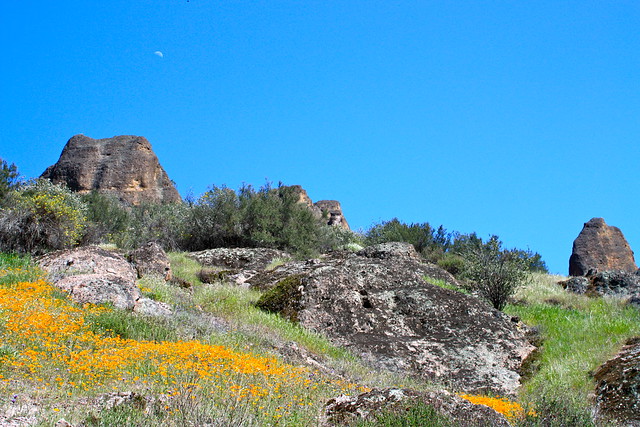 Apparently, cutting switchbacks in this section of the park is a major problem — almost every single hairpin turn had signs posted, warning hikers not to cut the trail — and in several places, actual fences were put up to keep people from doing so. 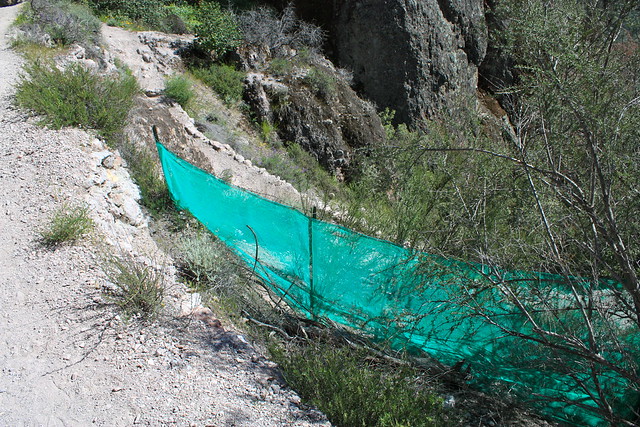 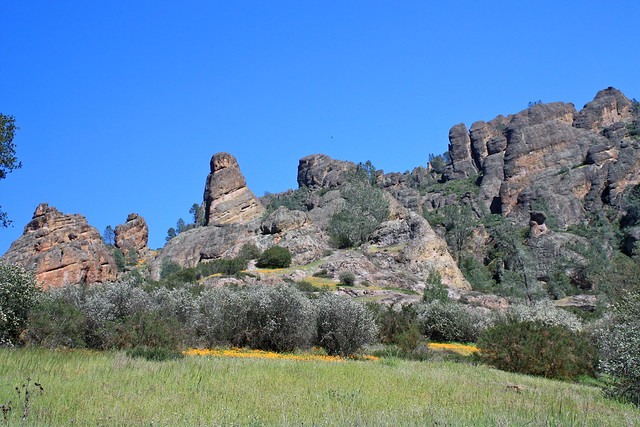 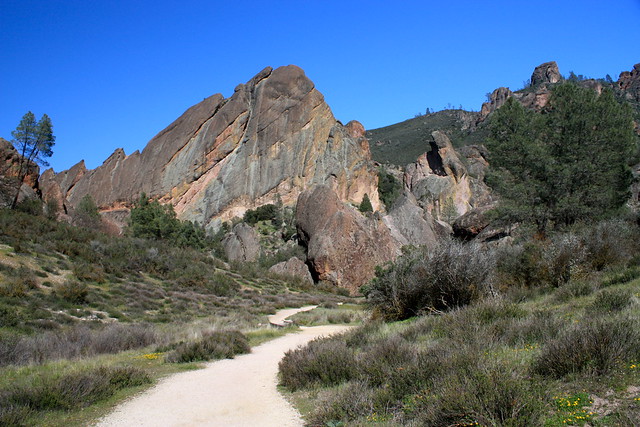 In 0.6 miles, the trail reaches the Balconies Cave, one of the two talus caves in the park formed when earthquakes broke huge sheets of rock off of the surrounding cliffs. The trail is pretty easy, as far as caving goes, but you should be wearing some waterproof boots and have a decent flashlight with you to go into the cave trail. Otherwise, the Balconies Cliffs Trail above the caves will give you outstanding views of the sheer face of the Machete Ridge formation, and shouldn’t be viewed as the “lesser route” by any stretch. 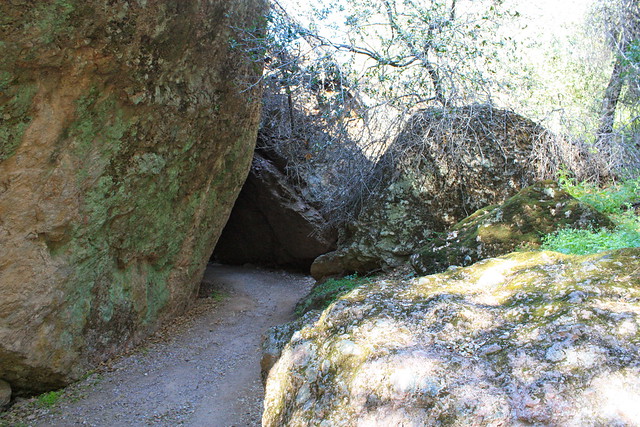 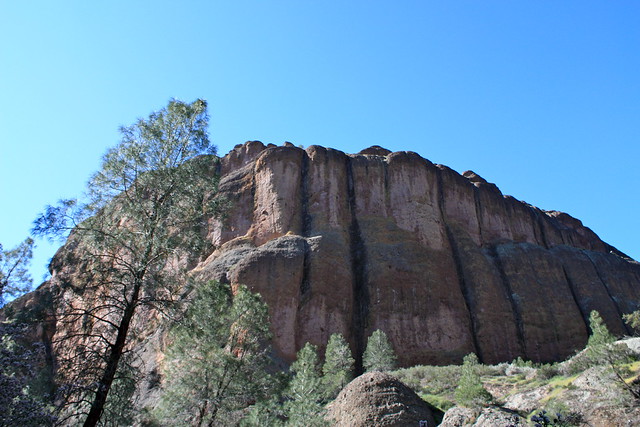 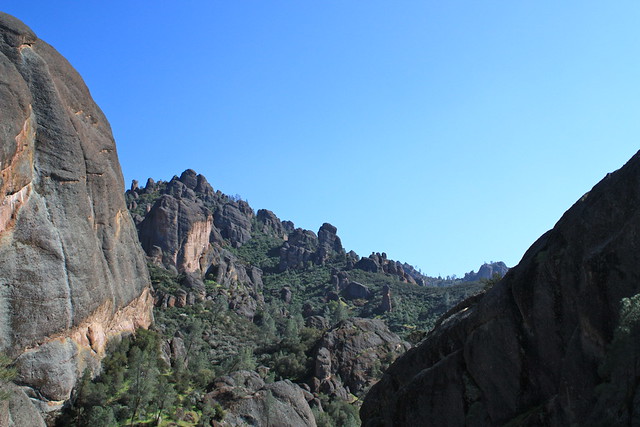 And from the other side of the cave, it’s an easy 1.3 mile riverside hike back to the Old Pinnacles Trailhead parking. Congratulations — you’ve just hiked from one side of a National Park to another and back!

Well-maintained trails criss-cross the park, and are very easy to follow - even inside the cave. Junctions are always clearly marked.

The in-park Pinnacles Campground has 135 sites and is well-stocked, with a nearby general store and even a swimming pool.

While we can't give you a definitive "yes" or "no" to the "will I be OK on this?" question, if you start early, pack properly, and heed the instructions of the rangers, you should be OK. Check in with the rangers at the visitor center - they'll have up to date info on the day's temperature and any inclement weather that's forecast ... and if it is too dangerous to do the full High Peaks Loop they'll have good recommendations for better options while it cools down. Have a great hike!

I plan to visit Pinnacles toward the end of August. I realize it will be insanely hot but am wondering if it would be too much to take on this hike if I bring along lots of water, high water content foods, and sunscreen? I am an experienced hiker and have no issues with the length of the hike. Also, I plan to start quite early. Doable?

Were there any wildflowers/greenery left when you were there, or is that season already past? Thinking about heading up there this weekend. Thanks!

That is definitely a great way to experience the park!

Thank you for this hike, it was fantastic! A great way to see the whole park in one day! We camped there as well, so we started the hike at the campground, which ~5 fairly flat miles. Also, we did bear gulch and chilled at the reservoir the next day.

I'm planning a hike with my grandson (10) and two family friends (12 and 19). This is so helpful. We will likely hit this trail Tuesday March 31. I'll post the results, but this post is so helpful for planning not to have a train wreck on the trails!

Pinnacles is great. You could also drop down the west side off the high peaks trail and check out The Fingers.

This is a great hike! The steep and narrow section was the highlight of the day. We saw 2 large condors, a snake across the trail, and we did get some vertigo at the top. Thank you for the recommendation on the hike!
Shana

Hi,
I just did a hike like this today. I started the same way as you, but at the end of the steep and narrow part of High Peaks I continued on the High Peaks trail down to the Reservoir and then into the Bear Gulch Cave. I think this is a good option too as the reservoir is very beautiful and you get to the see the other cave. Either way the top of the peaks part is fantastic and not to be missed!

Thanks for posting all the detailed notes.

I used to frequent your site a lot when I was in LA. Moved back in the Bay. Was looking up trails at Pinnacles and came across your write-up. Thanks for sharing this!