The hike to Sunset Peak is a winding fire-road hike to one of the front peaks near the Mt. Baldy Area. This is the longer but less strenuous of two routes and offers outstanding, panoramic views of the Baldy Bowl and – on clear days – the seemingly never-ending sprawl of the foothill cities. On the peak’s summit are the remains of an old fire tower that burned down years ago.

The Baldy Bowl may be my favorite hiking area in the entire San Gabriel Mountains. Sure, there’s the prominent namesake peak, but there are also the impressive “Three Tees” – Timber, Thunder, and Telegraph, the twin sentinels of Cucamonga and Ontario, and many more miles of wilderness trails on the north side of the mountains. For this trip, I set my sights on the least tall of the Baldy Bowl Peaks — Sunset Peak.

Located on the western side of San Antonio Canyon, Sunset Peak promised to offer some great views of both the mountains and the cities below, and — with the recent precipitation we’ve been blessed with — some snow-covered alpine scenery, too. From the exit off the 210, I could already see that Ontario Peak had a healthy dusting. Unfortunately, it didn’t look like I was the only one attracted to the snow that day. The closer I got to Mount Baldy Village, the more congested traffic got — not exactly the thing you look for when you’re driving that far away from Los Angeles. But instead of continuing toward the ski resorts, I turned off onto Glendora Ridge Road, passed the first trailhead at Cow Creek Saddle, and pulled off the road near a Forest Service road.

The view from the trailhead was already impressive — as the Sprawl Cities lay to my south and Lookout Mountain and a large chunk of Baldy guarded the north. The trail is on this Forest Service road, which slowly and deliberately winds its way to the summit. While I was hiking up, I didn’t pass anyone but did see several hikers’ trails in the small bits of remaining snow, along with a fair share of dog and horse tracks. While the trail itself was not very interesting, the views were outstanding. Like I mentioned before, the rain gave some (sadly) artificially huge visibility ranges — I could make out peaks as far west as Mount Wilson and the bat-ears of Strawberry and Josephine. The trail starts off at the end of the scrub range, and as it winds its way up, starts to move through the Jeffrey Pine in the higher elevations. It’s one of the shortest and easiest ways to experience one of the major landscape shifts in the Angeles National Forest. Most of this trail is on the north face of the mountain ridge, which means it’s more shaded and generally cooler than the rest of the nearby terrain. For me, this meant I was trudging through snow for most of the way up. And not the fun, powdery stuff, but the crusted-over, tough, icy snow. It wasn’t too bad, but it did decrease my hiking speed a bit. At about the 2.7 mile mark, the trail circles around a small ridge just to the northeast of Sunset Peak’s summit. Here, the fire road meets up with a small firebreak / use trail that ascends from Cow Creek Saddle. It is an alternate route to the peak, but is much, much steeper than the fire road route I describe here. I would have taken it, had it not been completely iced over. Steepness and ice are not two things you want to mix if you don’t have the proper equipment.

Instead, I took in the views from this area, which encompasses a nearly 360 degree view of the San Antonio Canyon and Baldy Bowl. The view from the actual peak will be better, but this is still pretty impressive when you first lay eyes on it. The long, sloping ridge of Baldy dominates to the left, with Thunder, Telegraph, and Timber in the center, and the north slope of Bighorn on the right. From there, it’s just a short (or, very short if you take the use-trail) trip to the summit of Sunset Peak. The fire road swings around to the south of the summit and continues away from the peak. Here, there is a very easy-to-spot trail that will take you north toward the summit, where you can fully get that full 360 view you’ve been longing for — as well as spot a few leftovers from a burnt-down lookout tower that used to crown the peak. 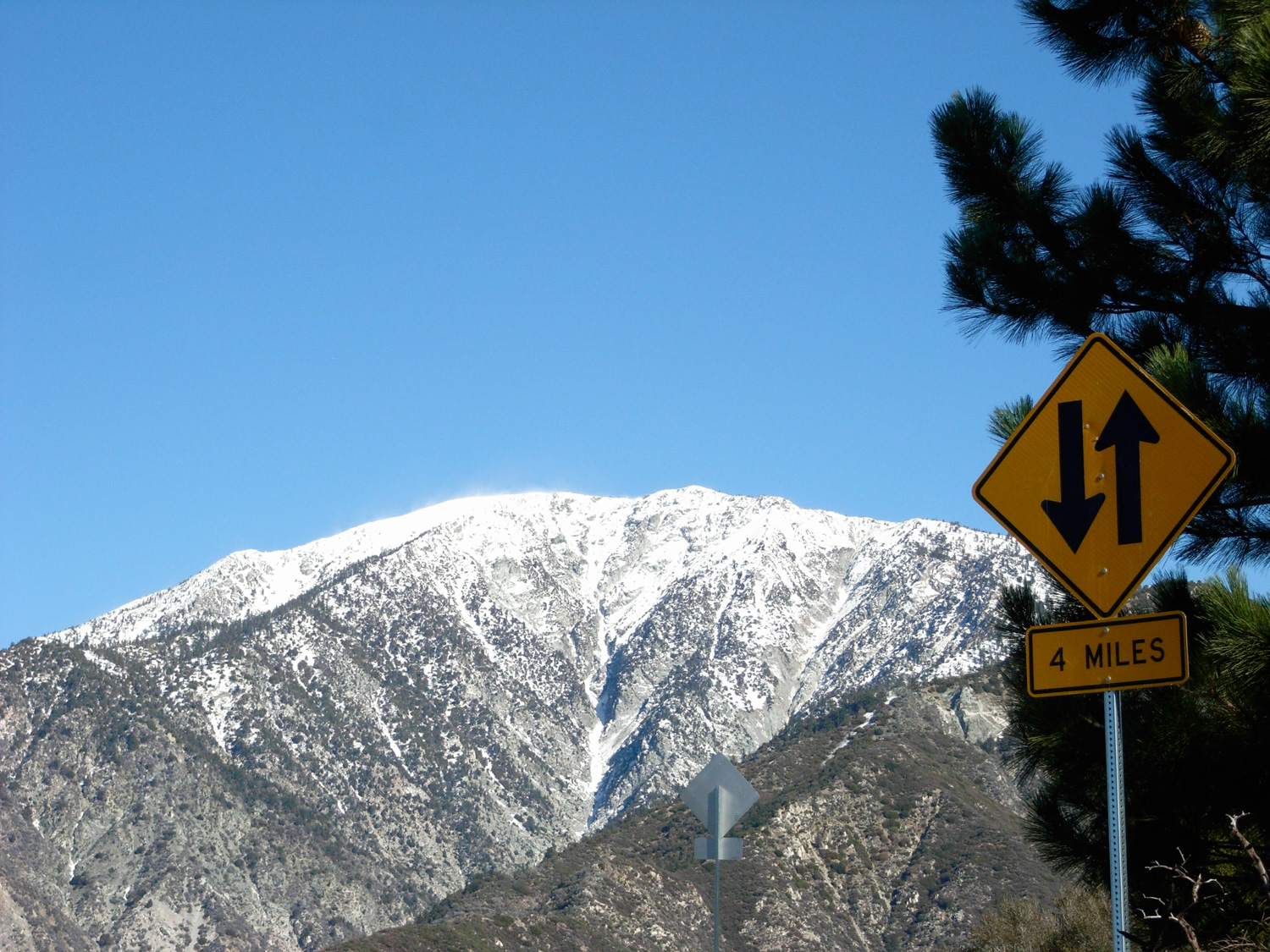 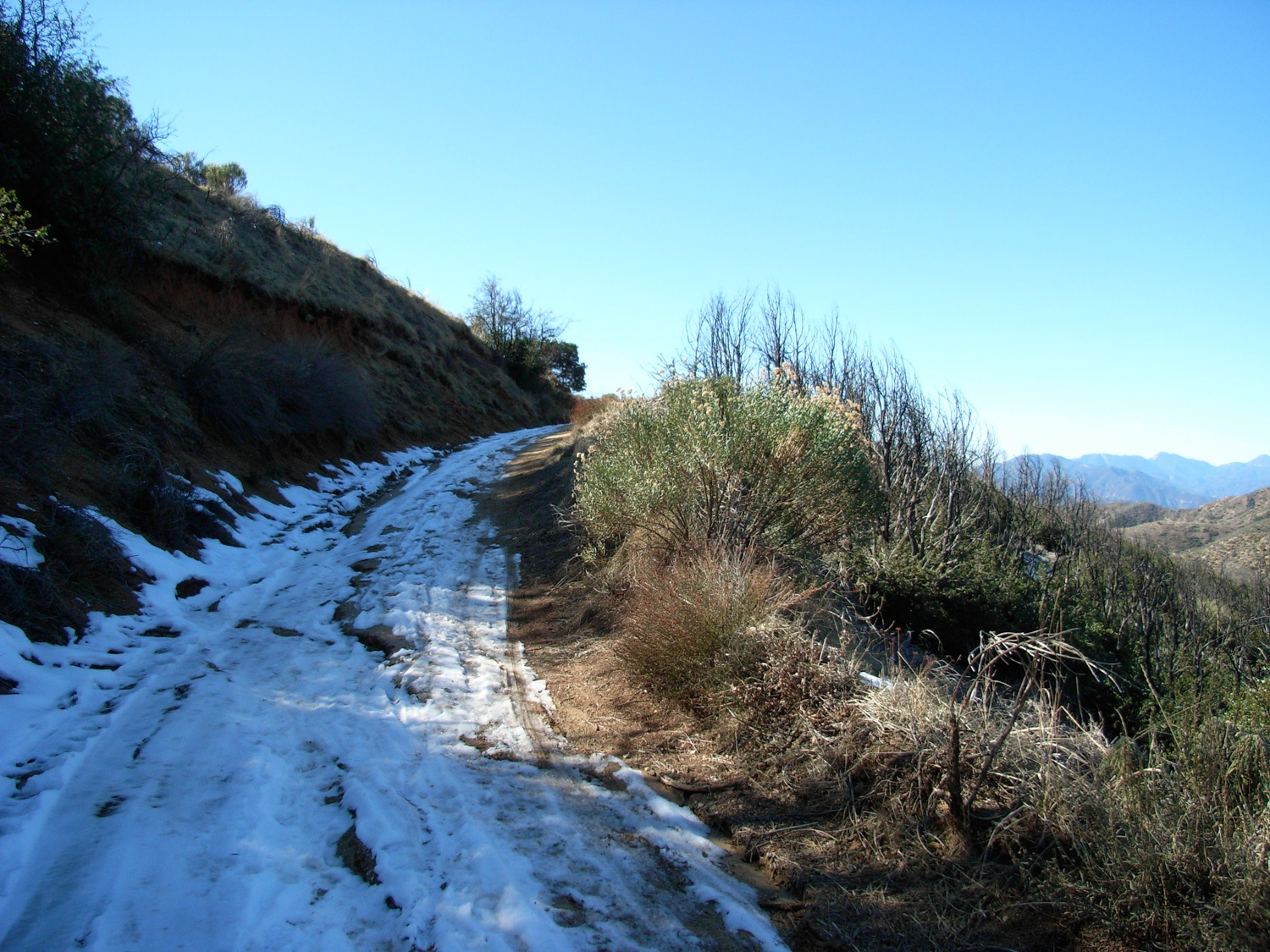 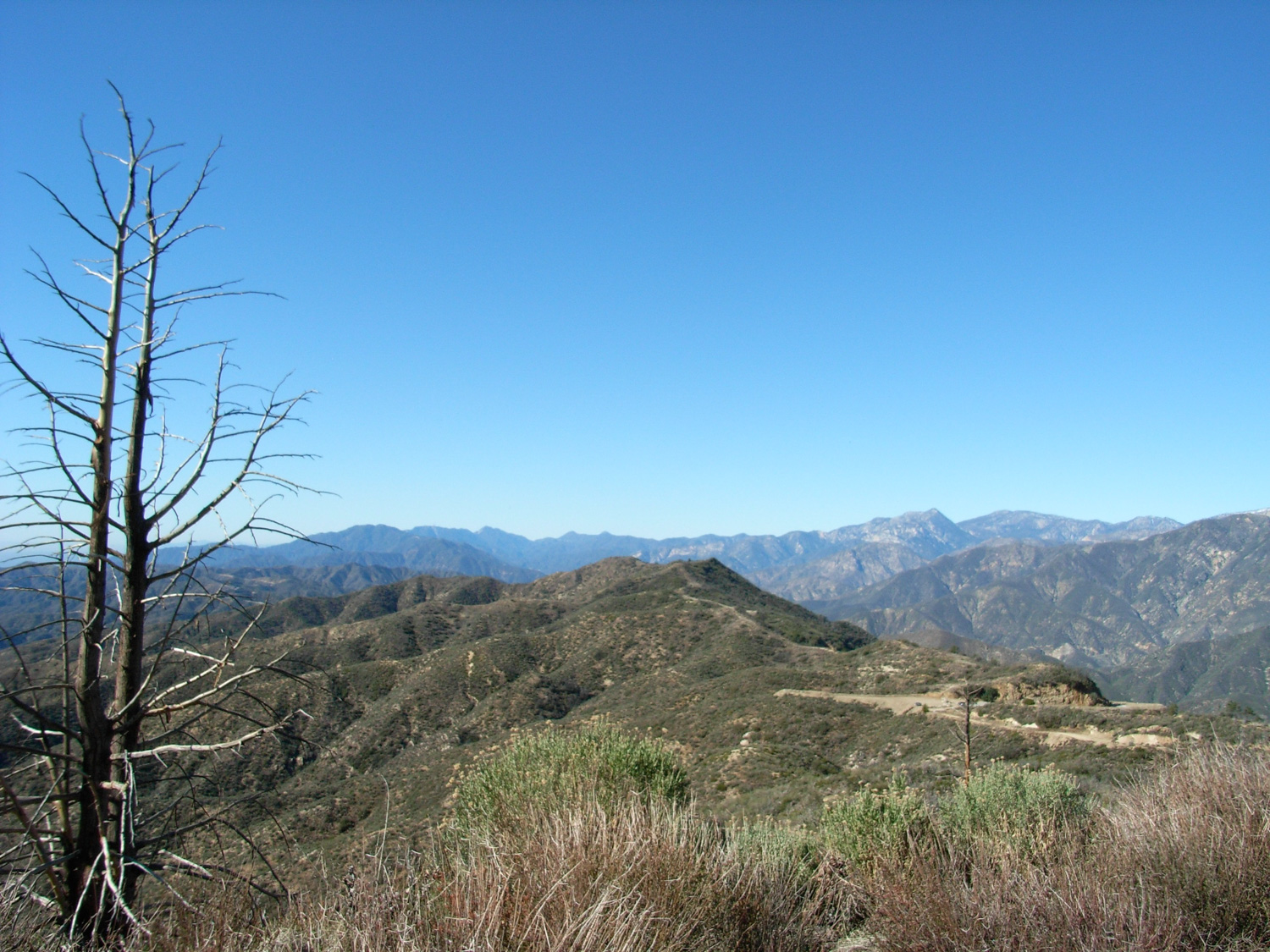 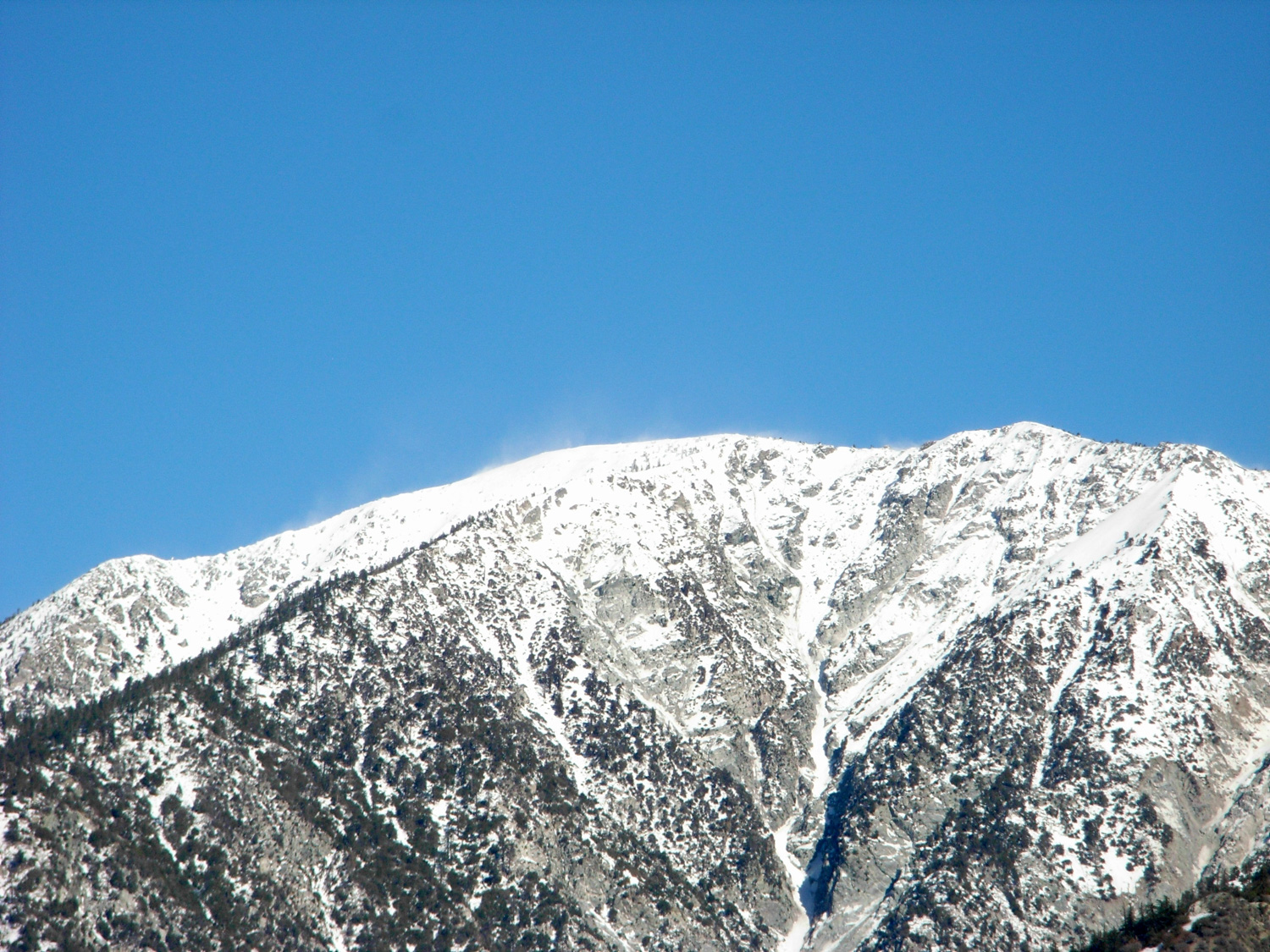 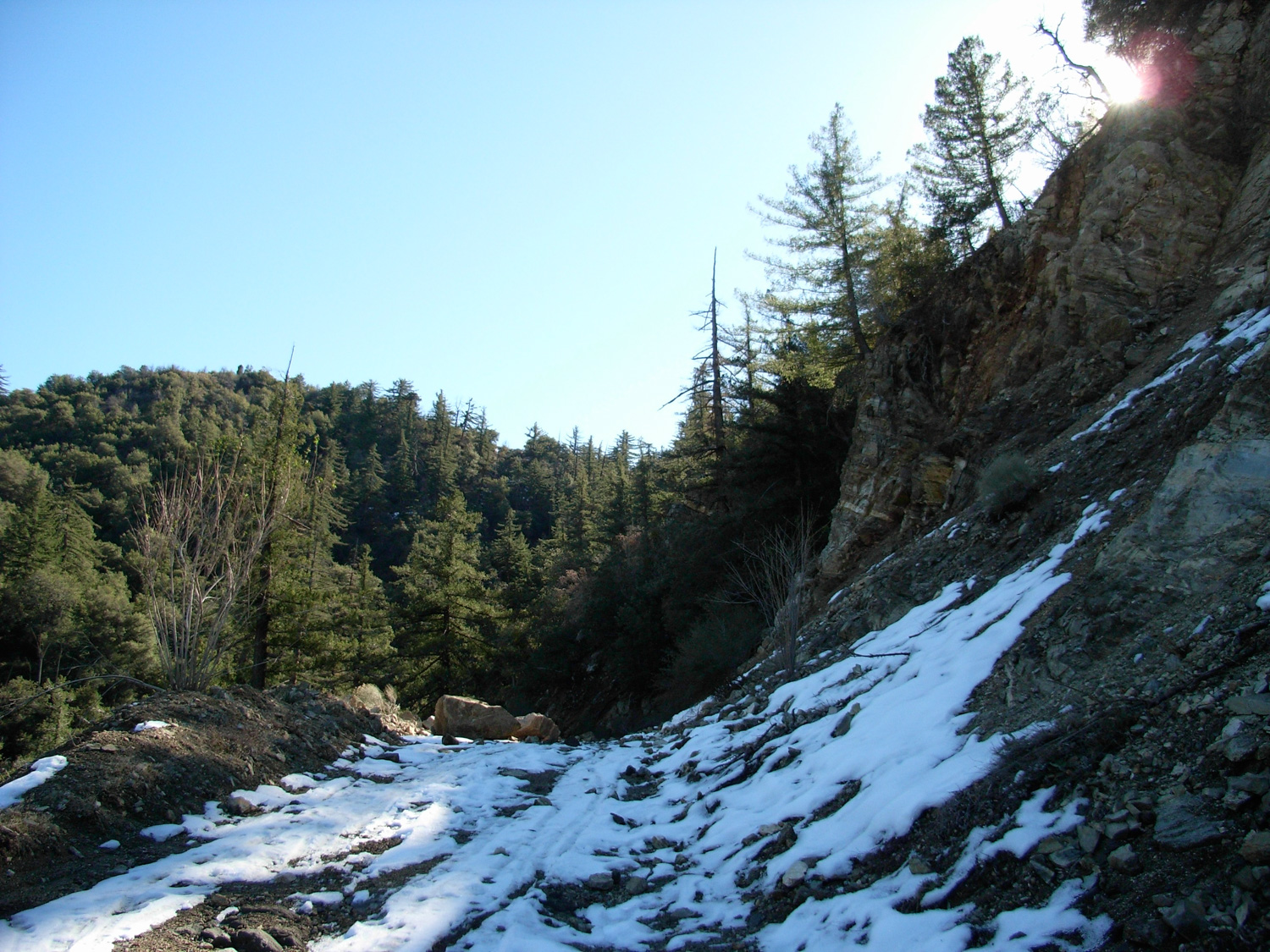 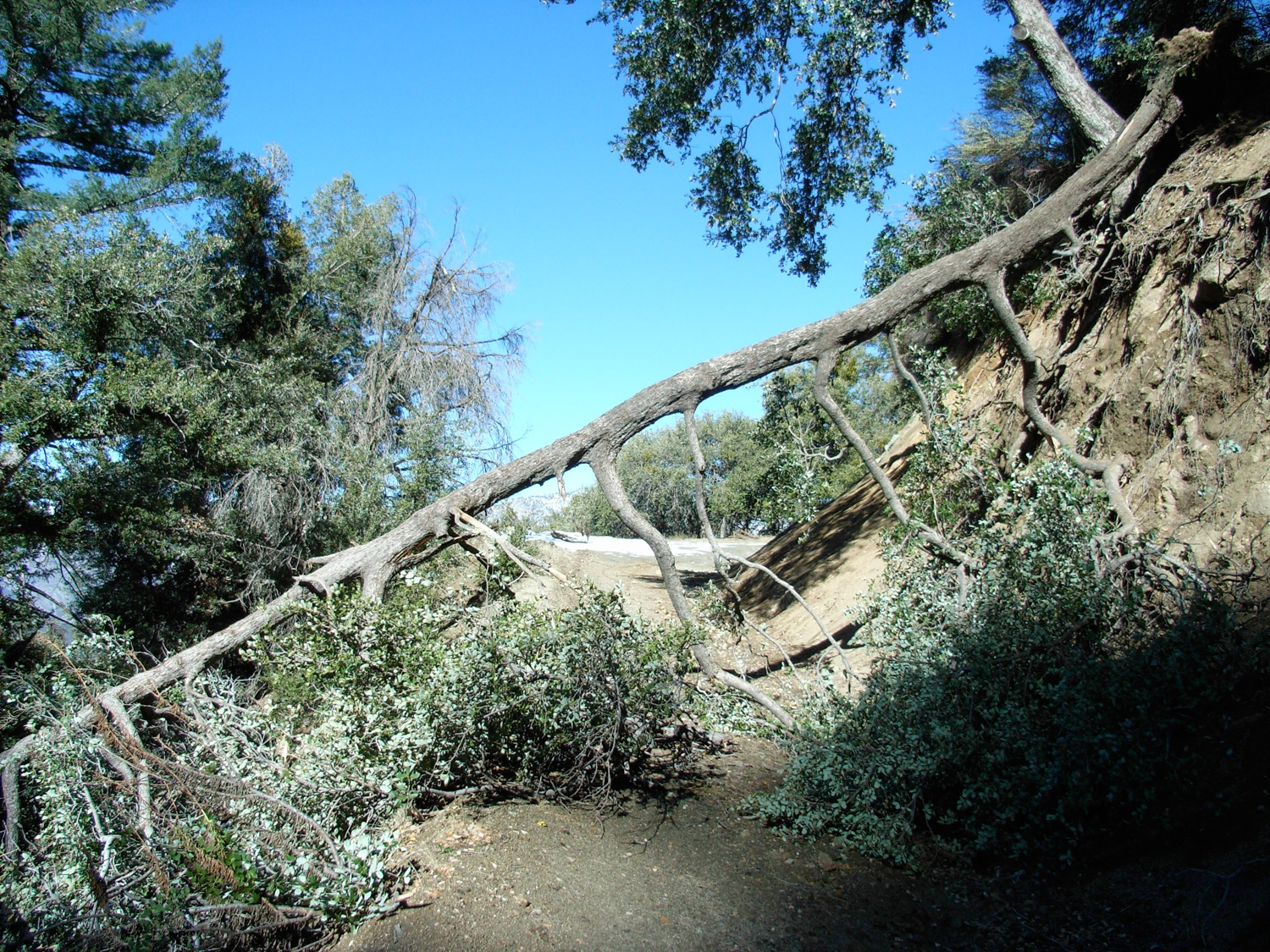 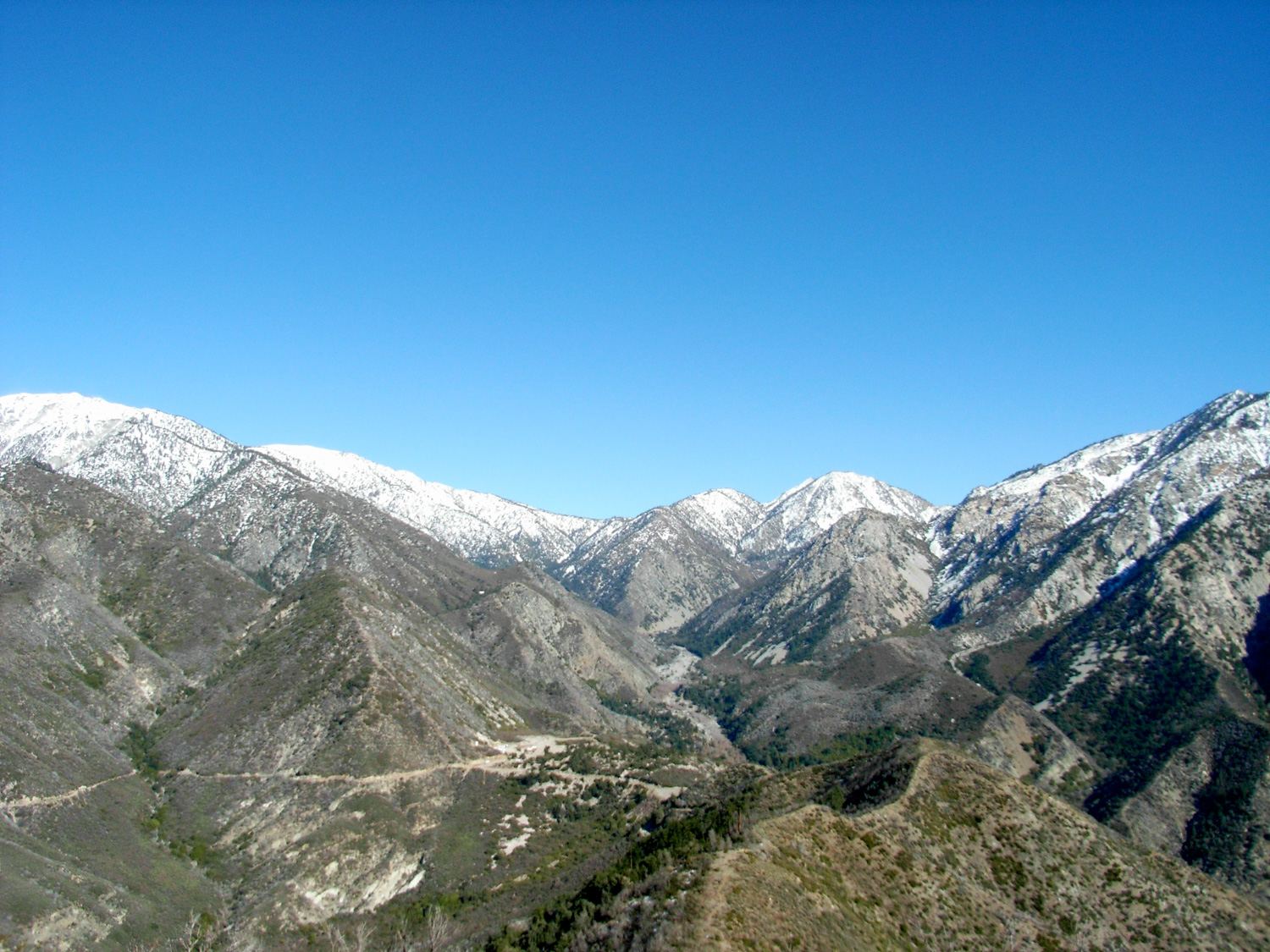 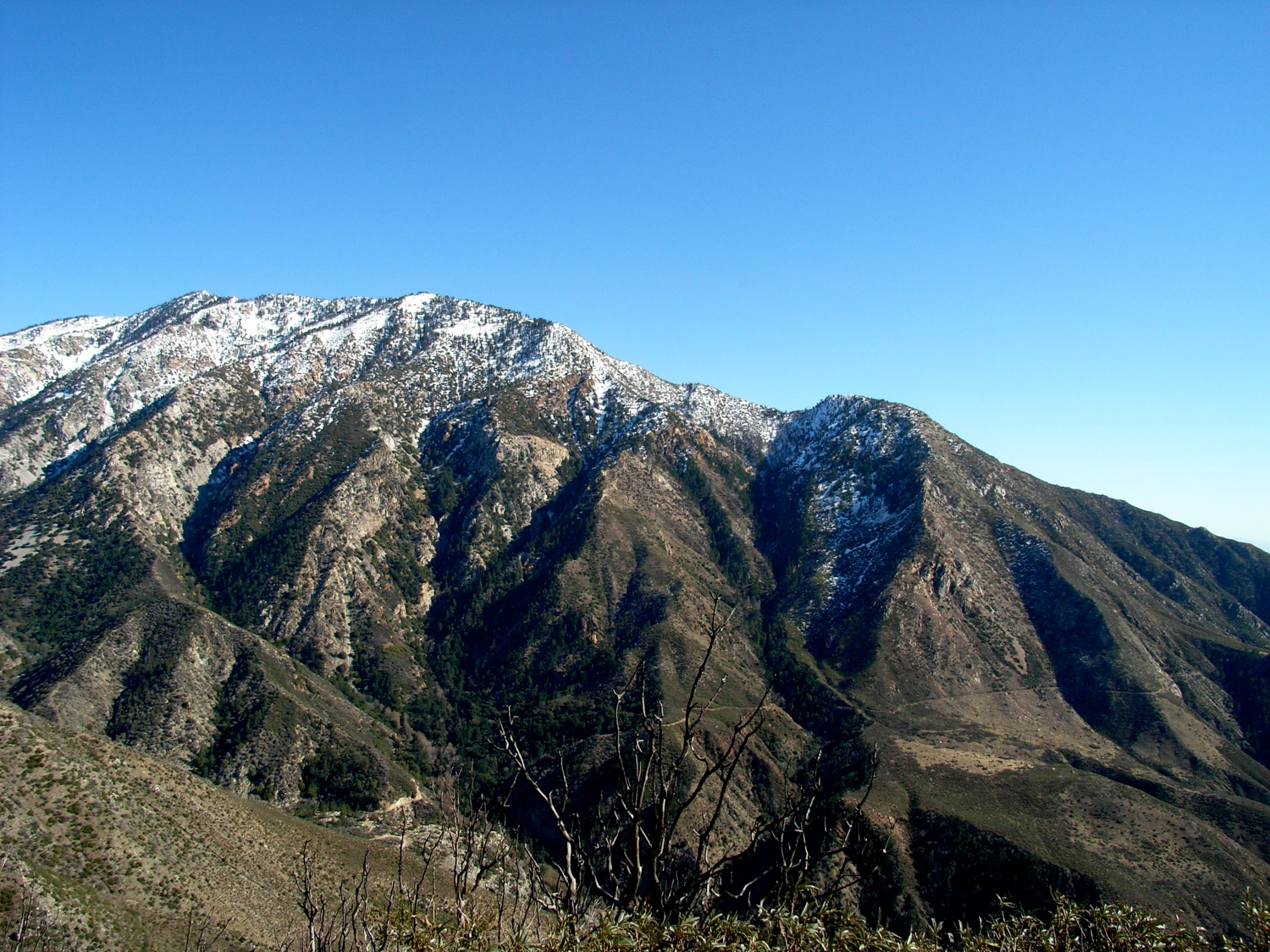 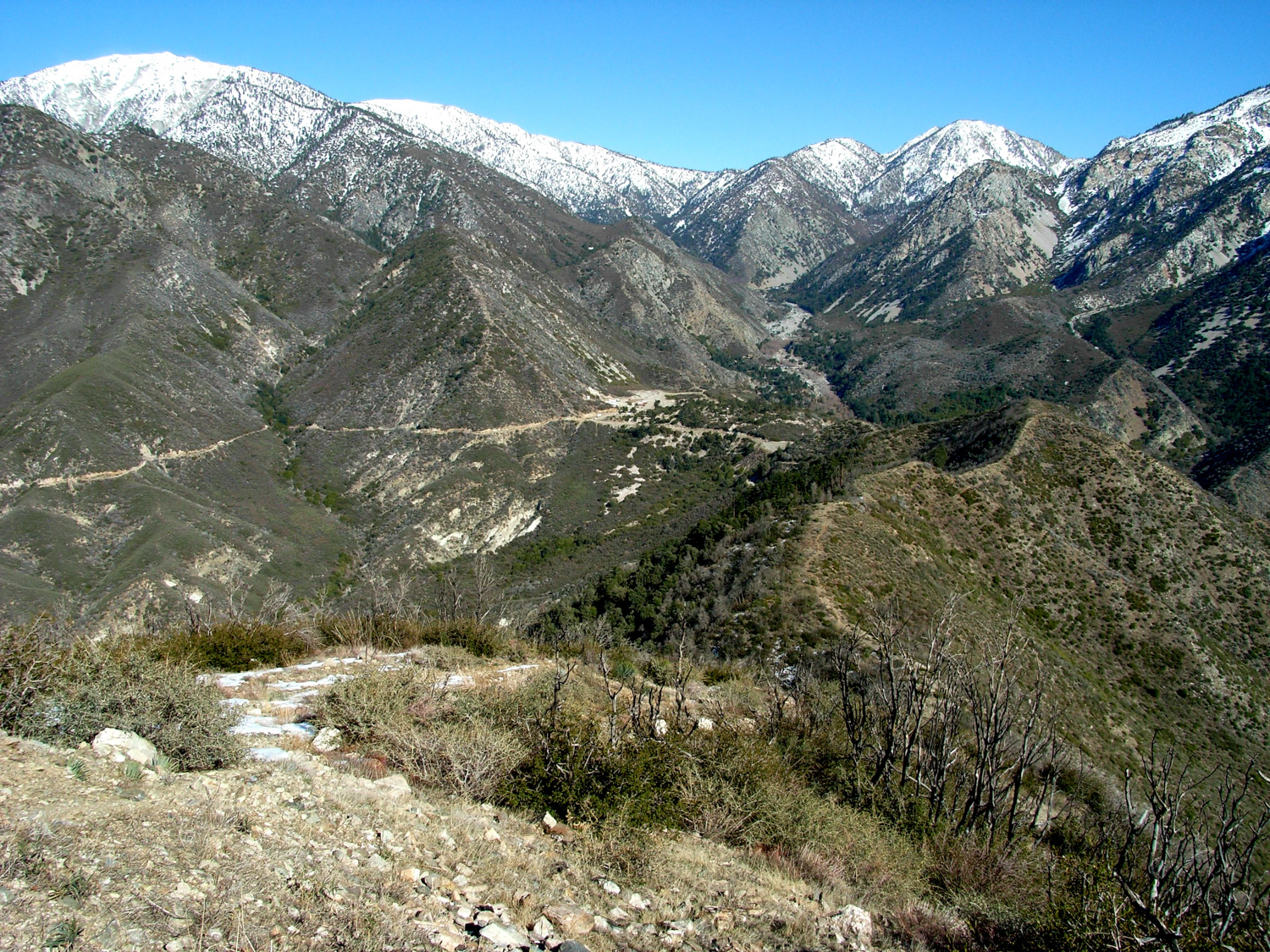 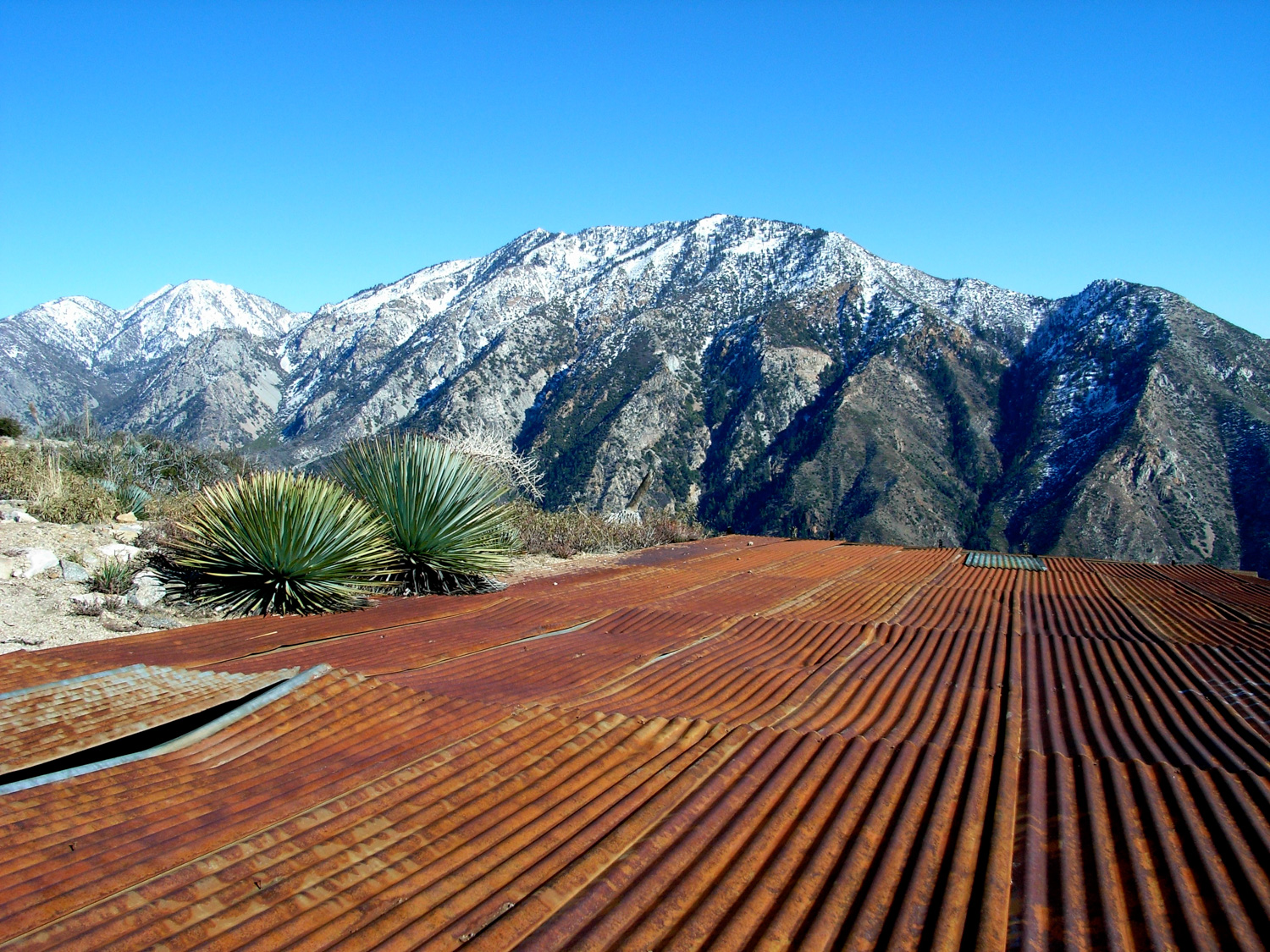 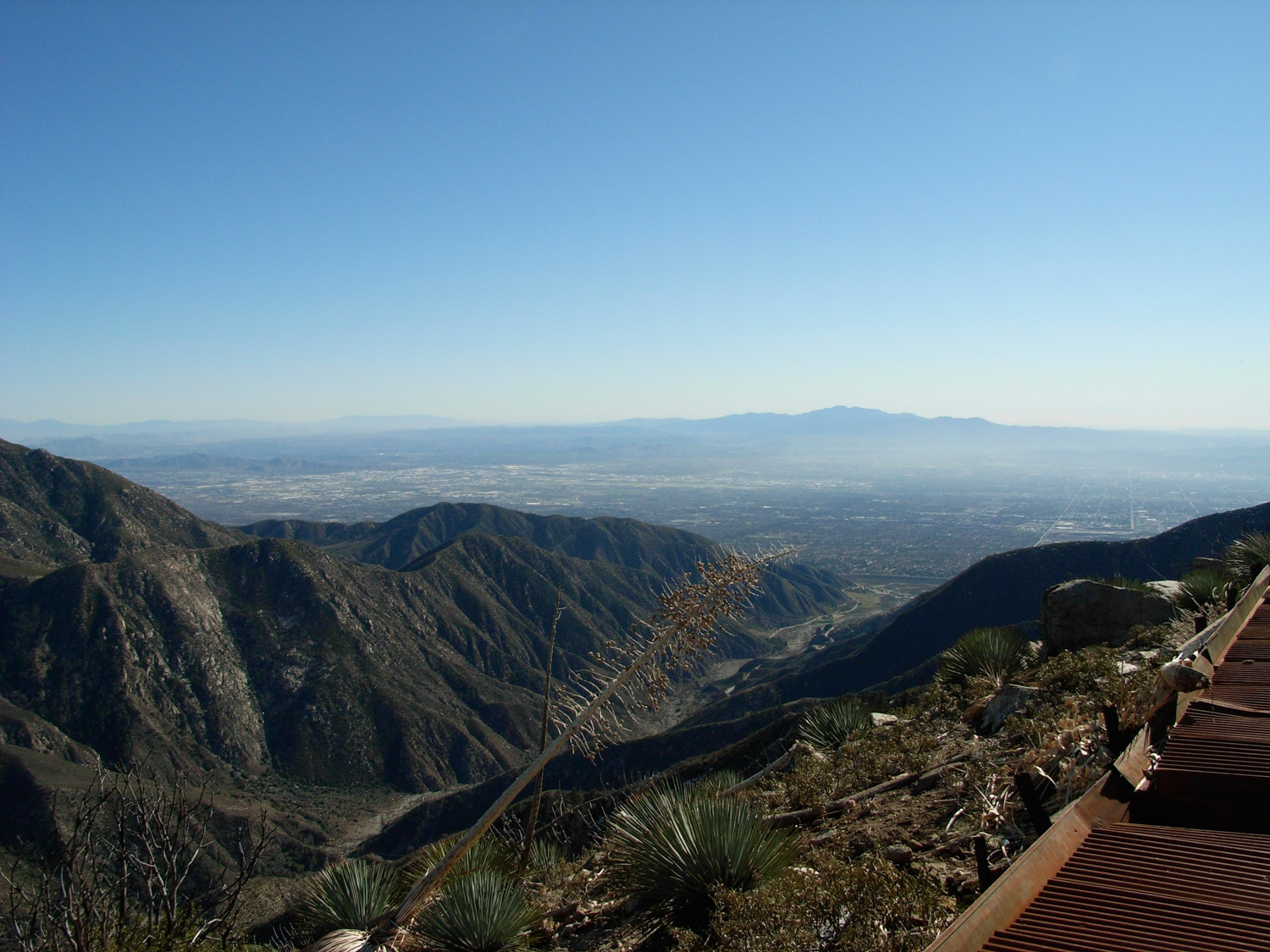 Very good. It's fire road almost all of the way, so it's wide and relatively level. Junctions aren't marked, but just keep going up and you should be fine.

From the 210, take exit 52 at Base Line Road. Head west on Base Line Road at the exit and turn right onto Padua Avenue. In 1.8 miles, turn right onto Mt. Baldy Road. 7.1 miles later, make a sharp left onto Glendora Ridge Road. The fire road trailhead will be on the south side of the road in 4.2 miles. Note that these roads may be closed or require chains during the winter months.