South Mount Hawkins is a prominent peak deep in the San Gabriel Mountains. With commanding views of San Gabriel Canyon to the south, Sheep Mountain Wilderness to Mount Baldy to the east, and past Twin Peaks and the front range to the west, it’s easy to see why this peak had a fire lookout tower on it for so long. Unfortunately, in 2002 the Curve Fire swept through the area, taking the tower out with it.

Still, this trail near the end of CA-39 has more than enough to justify a long day hike or multi-day backpacking trip. Small but popular Crystal Lake is one of the only naturally formed lakes in Southern California and is often stocked with rainbow trout for anglers. The nearby Crystal Lake Campground offers cabins and campsites that feel a world away from the city, and the Crystal Lake Cafe has fantastic homemade food (including some killer vegetarian soups). The area is popular with hikers, campers, anglers, road cyclists and mountain bikers – and in the winter, snowshoers!

This challenging and epic loop route takes you up the north wall of the natural amphitheater that hems in the Crystal Lake Campground, then circles back via a section of the Pacific Crest Trail before turning south along the long, undulating Hawkins Ridge. Here, it visits the site of the circa-1935 wooden fire tower before returning to the trailhead via the old (and slightly disheveled) dirt service road that used to end at the tower.

This trail starts at the end of Crystal Lake Road, where a gate prevents you from driving through the campground sites. Lace up your boots, put on your sunscreen, and start hiking on the Windy Gap Trail as it meanders through creekbeds and camp sites. 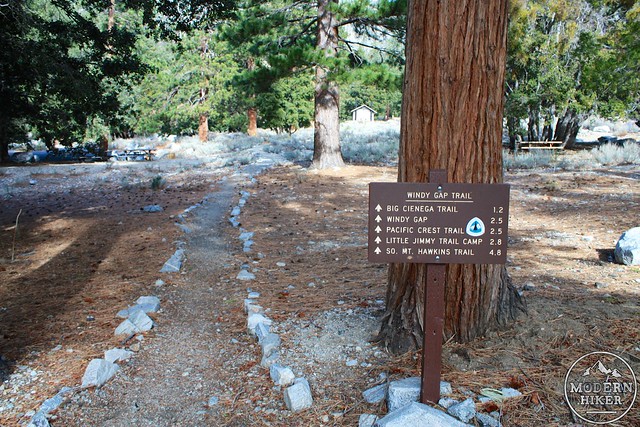 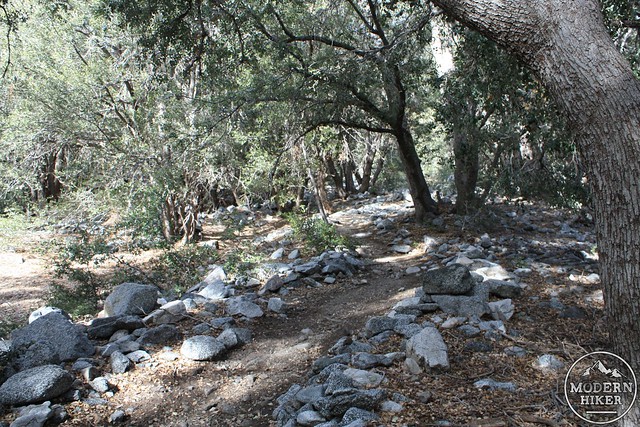 In the first 0.4 miles, you’ll cross the now-dirt Crystal Lake Road and the trail will start some short and easy switchbacks as it leaves the healthy pine groves for an area ravaged by bark beetles and drought. Views of the canyon to the south will already start to open up but don’t worry about soaking in the views just yet – they’re much more epic later on. 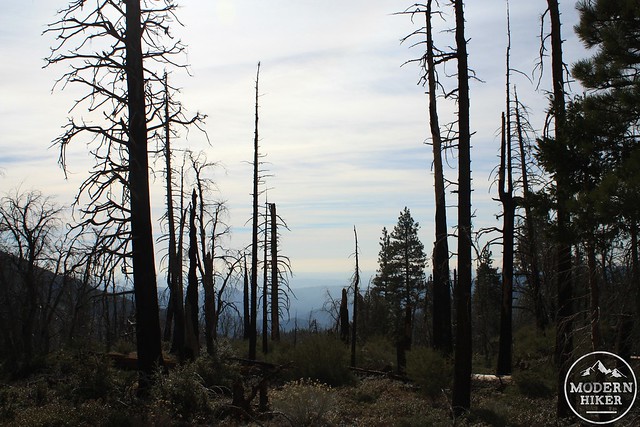 You’ll cross the road again at 0.6 miles and at the mile mark, where the trail crosses the old fire lookout road at a slight diagonal. Look for the sign for Big Cienega Trail and make sure you hop on that instead of staying on the road. Make sure you’re heading east and toward the Windy Gap Trail – not the Islip Ridge Trail. So basically, keep to the right at this sign. You can see where someone has faintly etched in “Little Jimmy” in that direction. 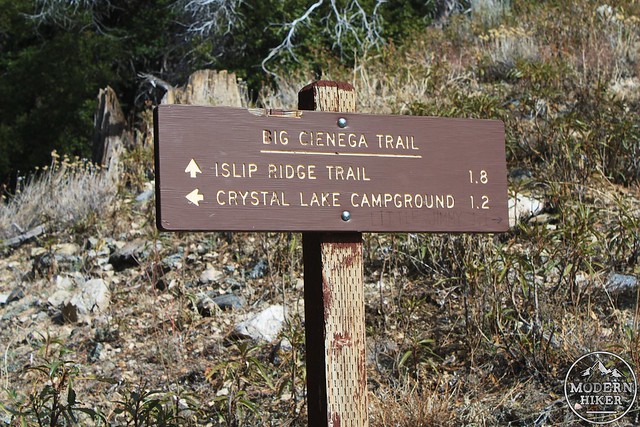 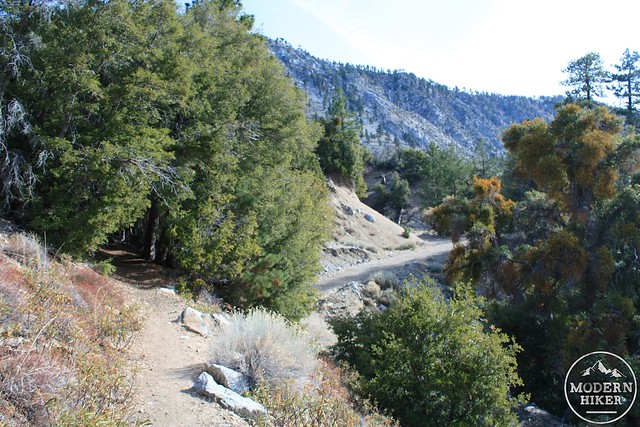 The Windy Gap Trail stays within view of the road for the next half mile, at which point it makes a sharp switchback turning north. From here, it’s pretty much a bee-line straight to the saddle of Windy Gap – and if you’re looking at it and it seems a bit higher than where you’re standing now, that’s because it is. By now you’ve already gained 1140 feet and the rest of the trail to the Gap is at about the same incline, so get your legs used to it. 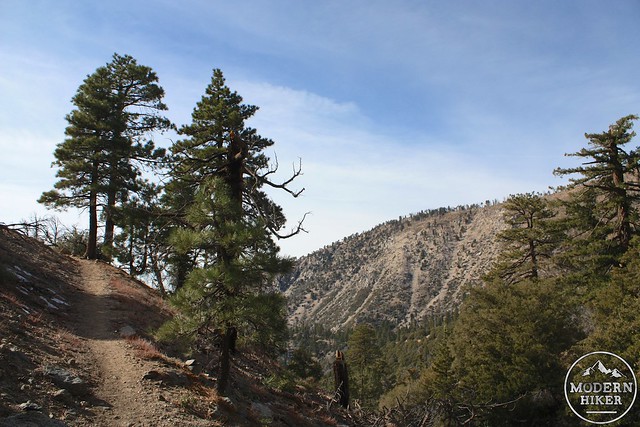 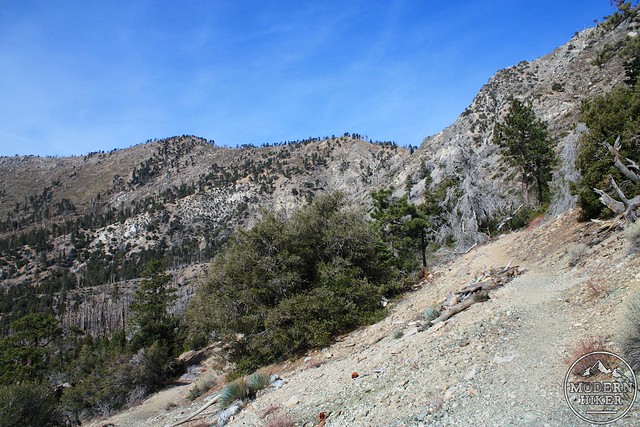 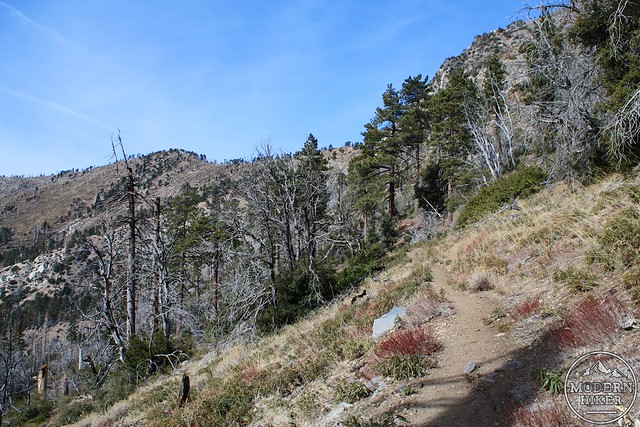 The trail passes through meadows and manzanita before eventually hitting some scree slopes. There are some sections of the trail here that are in need of new retaining walls but everything is passable. 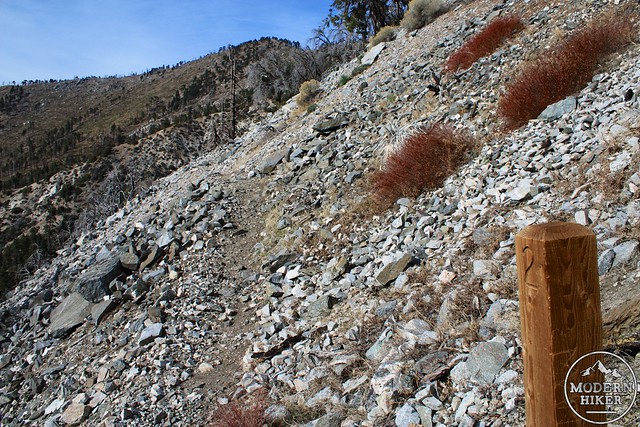 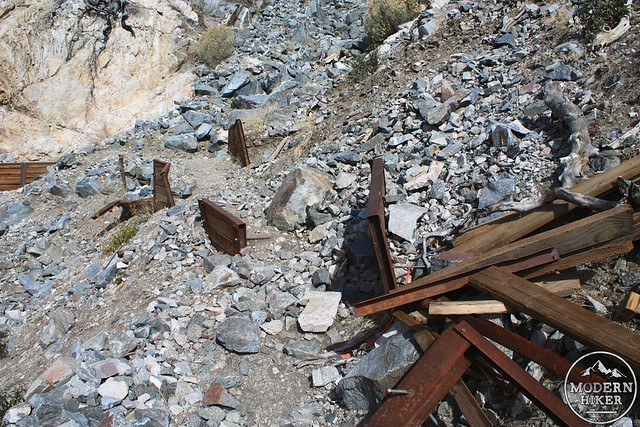 On these upper stretches of the trail to Windy Gap the pine trees thin again, but you’ll get some epic, sweeping views of the canyon below you as you keep on that seemingly never-ending ascent.

At the 2.5 mile mark, you’ll finally pass through Windy Gap – a great place to take a little breather after that killer climb. If you’re feeling feisty, it’s 0.8 miles to Mount Islip from here – but be sure to save some energy. The Pacific Crest Trail heading east continues that same incline for just about another mile.

Even into the early Summer, there may still be snow and ice on this section of the trail. Because it’s on a north-facing slope and usually behind the ridgeline, the cold stuff can hide out here much longer than it does on other trails in the region. When I hiked this route the trail started off with just a dusting on the edge of the trail but quickly became completely covered by packed ice and snow. 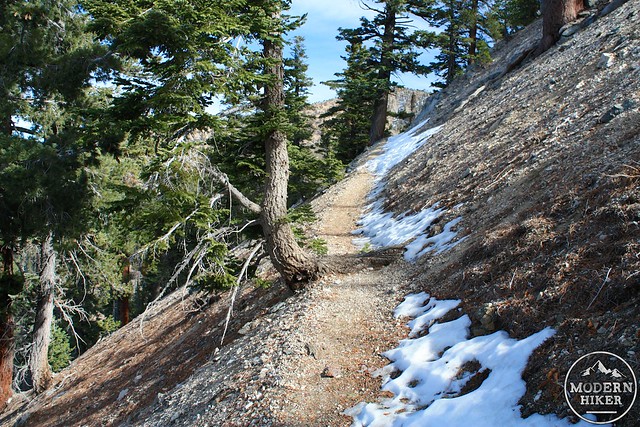 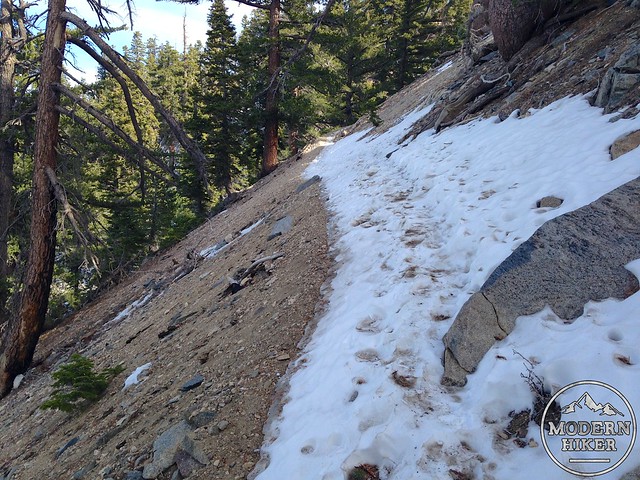 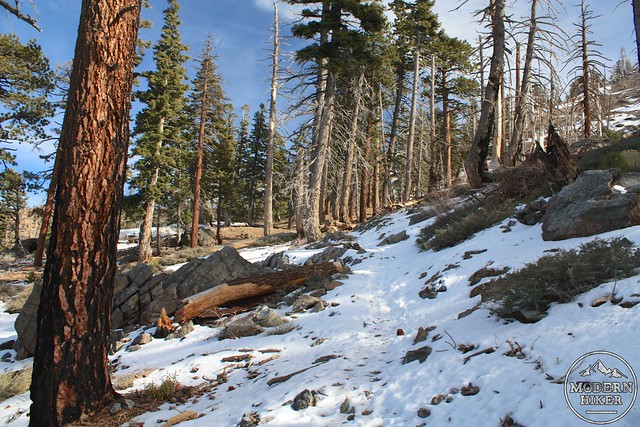 As the trail nears the 3.5 mile mark you’ll be rewarded with two things – first, the merciful start of your long descent and second, a view of Throop Peak to the east. 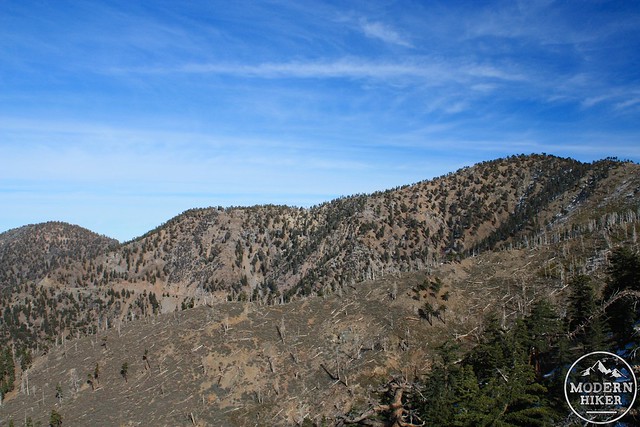 Continue east on the PCT as it makes its way through some gorgeous old conifers until you reach the 3.8 mile mark. Here, turn right to head south on the unmarked Hawkins Ridge Trail – unless you want to make another quick side trip to nearby Mount Hawkins. 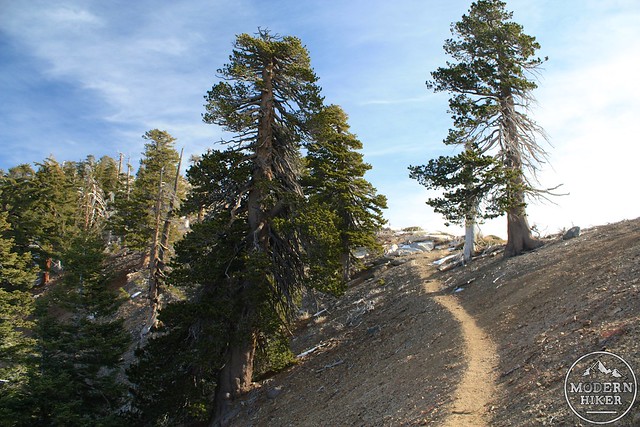 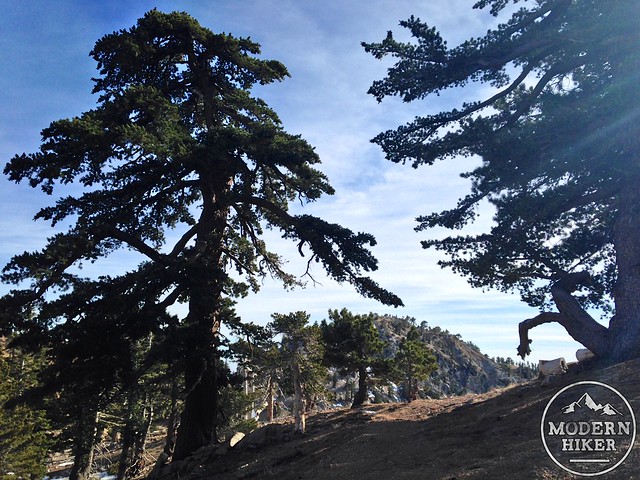 Despite needing some TLC in a few sections, the trail along the Hawkins Ridge is supremely peaceful and pleasant. There are some amazing views of the Sheep Mountain Wilderness to the east and the trail itself makes a gentle, winding descent along the ridge with some beautifully-designed twists and turns.

If you’re summit-seeking, there is an unofficial use-trail that runs along some bumps on the ridge. Between Mount Hawkins to the north and your destination of South Mount Hawkins are two named bumps known as Middle Hawkins and Sadie Hawkins – all named for Nellie Hawkins, a popular waitress at the now long-gone Squirrel Inn on the San Gabriel River.

She must have been quite a gal. 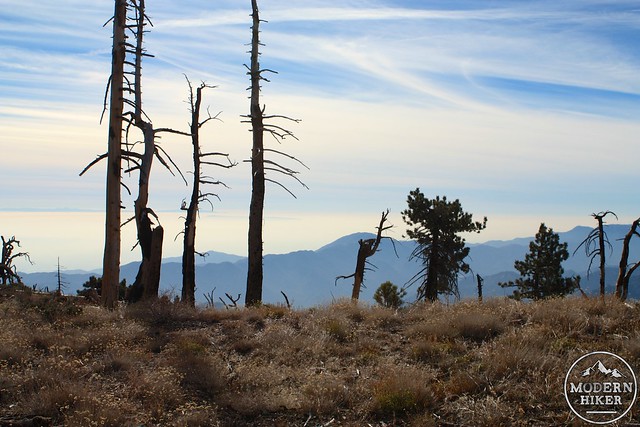 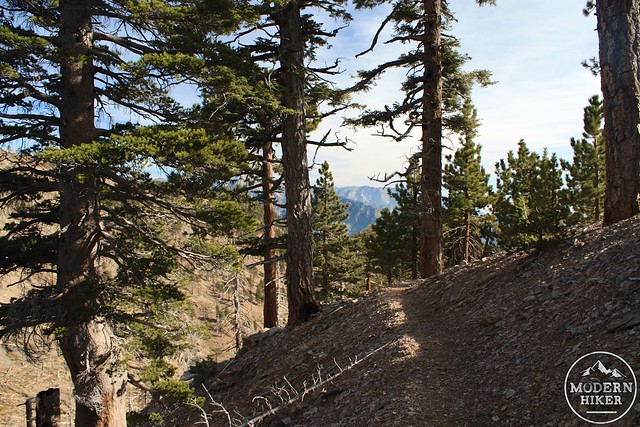 As you’re soaking in the jaw-dropping views, be sure to keep an eye out toward the south. The prominent bump on the ridge is South Mount Hawkins, and you’ll be up there shortly. As I was making my approach, the sun began to set, lighting up the surrounding sky and mountains in shades of pinks and purples that seemed very reminiscent of the Smokeys … or at least, of pictures that I’ve seen of the Smokeys. 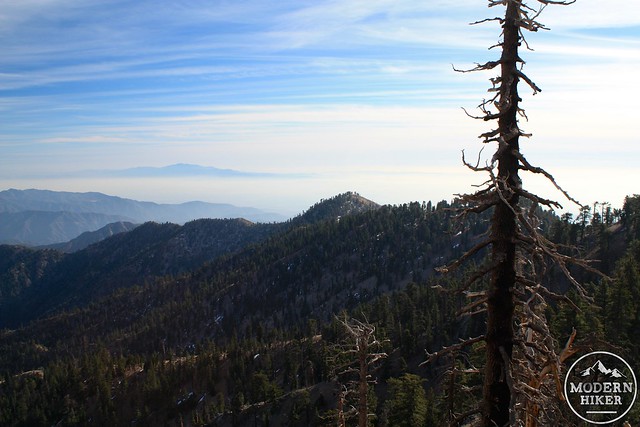 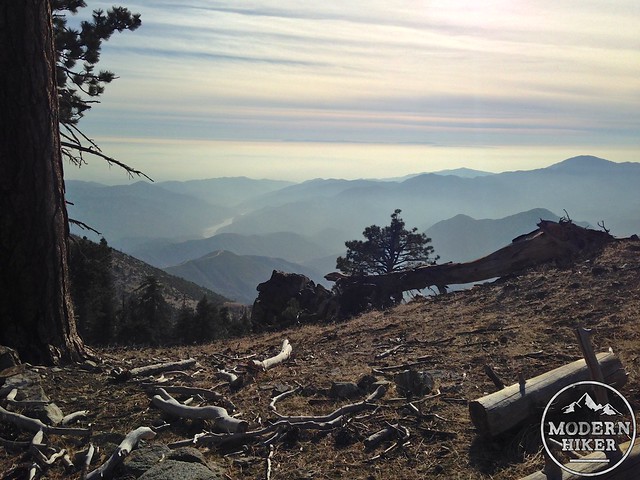 At around the 5.1 mile mark, the trail makes its way through a small meadow and begins its descent to the old fire lookout service road. The rounded bump of South Mount Hawkins is now directly in view – but you’ll still have some beautiful and epic vistas distracting you to the east, too. 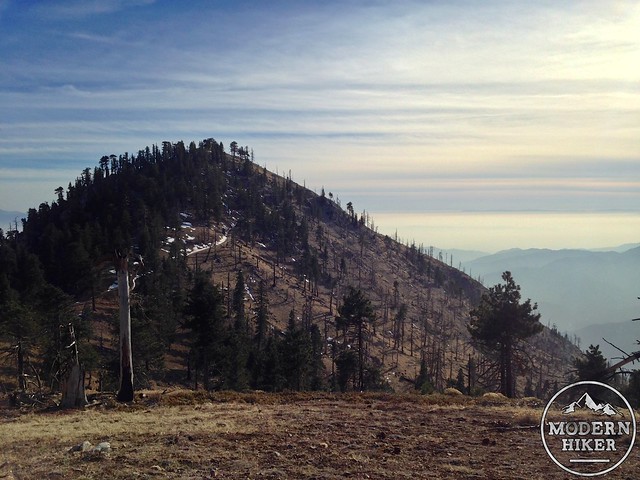 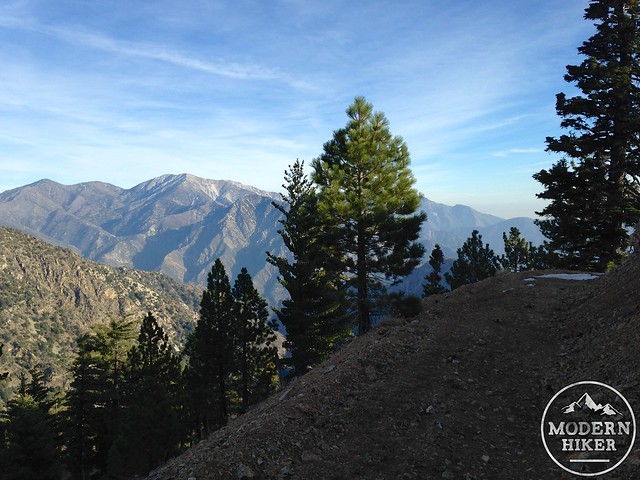 At 6.1 miles, take a left onto the old service road and begin your final, half-mile ascent to the summit of South Mount Hawkins. Be sure to give yourself enough time to really soak in the views when you reach the top – you can get a nearly 360 degree panorama while walking in the ruins of the old fire tower and I can guarantee you’re going to want to linger here for a while. 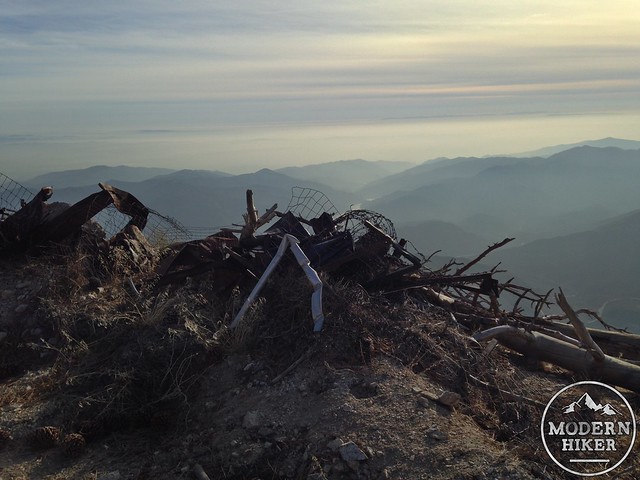 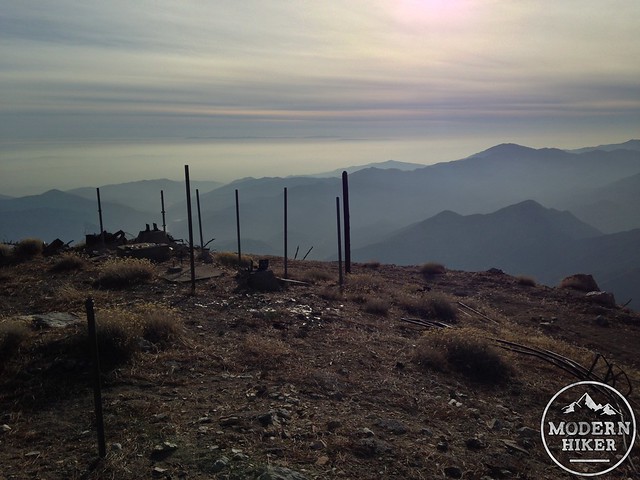 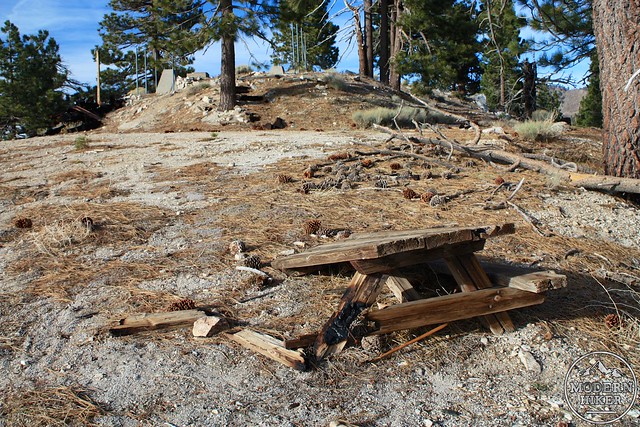 It’s five miles of old service road back down to the trailhead. You’ll have some decent views as you descend but it’s not nearly as interesting as the rest of the hiking you’ve done today. If you get down early enough, be sure to stop at Crystal Lake Cafe for some refueling before you head home after a day well-spent.

Rains in early 2014 have severely damaged the fire road descending from the South Mount Hawkins lookout ruins. Reader Alex Gurrola sent in this view of one of the washed-out sections:

As far as I know, the Forest Service is considering this road abandoned for now – so be prepared to give yourself some extra time as you’re making your way back down to the trailhead.

Good. Most trails are in decent shape and well-signed at junctions. This area was badly damaged in the 2002 Curve Fire and some of the more remote stretches of trail could use a little love - especially on the Hawkins Ridge. No part of the trail is impassible, however.

Crystal Lake is the nearest developed campground, offering up to 36 camp sites as well as cabin rentals (and a wonderful Cafe and Trading Post with killer chili). Rates and available resources change depending on the season. Call 626-335-1251 for more information. In addition, the hike-in Little Jimmy Campground is accessible from this route.

From the 210, exit at Azusa Ave (CA-39) and head north for 24.1 miles. Take a right onto Crystal Lake Road and continue for 2.4 miles. Pass the Cafe and camp sites and park where the street ends. Note that the Google Maps directions may send you either to just the Cafe or into the Campground.

Hi Casey,
Good tips, thank you for the link with the numbers! No worries at all. It was a nice drive up through the marine layer.

Sorry about that. In COVID times, everything seems to be up in the air always. Trails can be closed at a moment's notice and -- as you've found -- not every agency is exactly the best at clearly communicating that information. These days, I'm calling the day before I hike AND heading out with some backups in mind nearby just in case.

This page will give you a bunch of numbers for that region. I would call the San Gabriel Mountains National Monument or Angeles National Forest HQs first.

I was up there on 6/28/20 and the gate on the road at the Crystal Lake Visitor's Center and Cafe is closed. It says no pedestrians, motorcycles or vehicles allowed past that point. Any idea when it will reopen? I can't find any info about the closure online. We turned around and went home, but will try again some other time.

Thanks for the heads up -- looking back at that section I can see how it could be confusing, as three different trails and a fire road all meet up in an inexact junction near the sign. I clarified a bit of the language around that. Always appreciate when someone find a passage that I think makes sense but actually doesn't :)

hi casey, love your site, but i think you should remove the photo of the big cienega trail sign, if hikers take the islip ridge trail they end up going 1.5 miles out of the way and summiting mt islip which is what i just did! great hike though, but your writeup is definitely confusing, you should just clarify that hikers should be looking for the windy gap trail, not mt. islip!

Nice! I really love this trail and am due for a repeat trip soon, myself :)

Solo hiked this yesterday and really enjoyed it! Ran into a handful of backpackers on the PCT but once you split off on to Hawkins Ridge Trail, it is pure solitude. Trail conditions were great except for some washed out sections on the way down from South Mt Hawkins (all passable though). With a steady pace and minimal breaks, was able to complete in 4 hours.

The Hawkins Ridge trail is now marked at the PCT junction and the distance to it is also given at the Windy Gap trail junction.

We worked on the Hawkins Ridge Trail last year and it is in very good shape all the way down. There is also a nice spur trail that goes from the road to the top of South Hawkins, so it is not necessary to hike the road to the peak. The South Hawkins Road from Deer Flat was bulldozed last year and the washouts are no longer a problem. However, rockfall is very common and rocks the size of small cars often litter the road. Debris will continue to fall on this poorly located road, so expect some rough hiking on the lower section near Snowslide Canyon.

The Hawkins Ridge Trail is in the Sheep Mountain Wilderness and bicycles are not allowed.

Any update on the conditions of this trail?