A 3.8 mile loop hike into the ruins of Murphy Ranch – a small parcel of land with an almost legendary history. This hike takes you from a popular fire road hike in view of the Pacific Ocean and peaks of the Santa Monica Mountains down long and winding sets of staircases to land that has been the home of Nazi sympathizers, an unusually uptight artists’ colony, and the Boy Scouts. This hike can be easy to moderate, depending on the season and your level of adventure.

Note: Some of the buildings at Murphy Ranch have been demolished. Others are slated for near-future demolition and rangers may be patrolling handing out citations for those who trespass inside the buildings. Read more about the threats to this incredible unique hiking destination’s future here.

One of the things I love most about Los Angeles is that, no matter how much time I spend here or how often I go exploring, there’s always still something unbelievable left to see.

This secluded 55 acre stretch of Rustic Canyon in the Santa Monica Mountains has a storied (and admittedly historically hazy) past. This old article from the LA Times does a good job of piecing together the facts that could be verified – in 1933 a Jesse Murphy purchased the land and began to develop it. The property eventually had 3000 fruit and nut trees, a complicated irrigation and water storage system, a functioning power house, machine room, and bomb shelter. Plans were underway to further develop the land, adding a four-story mansion and several libraries. Oh, and it was also completely surrounded by barbed wire fences and supposedly patrolled by members of the Silver Shirts – a pro-Hitler American fascist organization.

Much of the legend around Murphy Ranch is based in oral history, but supposedly Ms. Murphy was a pseudonym – or someone who never even existed. The Ranch was under the control of a mysterious man known only as “Herr Schmidt,” who claimed a psychic vision told him America would lose World War II and that once the dust settled over the ruins of Los Angeles he and his band of sympathizers would emerge from Rustic Canyon to help usher in the new fascist state in America.

Well, those plans went sour after Pearl Harbor, when FBI agents swept in and arrested most of the Ranch’s residents. The land was sold to the Hartford Artists’ Colony in 1948 and then to the City of Los Angeles in 1973 – and now it sits wedged between Will Rogers and Topanga Canyon State Parks.

Much of the ranch has succumbed to age or brush fires, but several structures still remain, and the trail is a great place for hikers interested in history, architecture or just plain WTF stuff.

The trail starts off in the fancy-pantsed neighborhood in the hills above Brentwood. Park to the east of Capri Drive on Casale Road, then hike west on the road. At a sharp corner, the road turns into the Sullivan Fire Road just near a more recently-abandoned building. 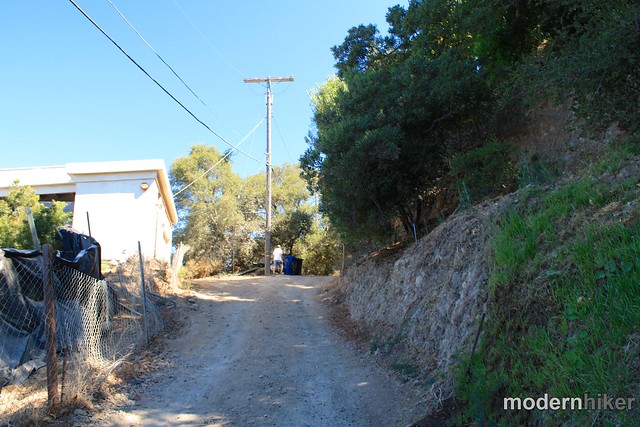 At this point, the trail is just your standard Santa Monica Mountains fire road hike – nice and broad, and with good views of the surrounding peaks and Pacific Ocean. When we hiked in the morning on Sunday, there were quite a few hikers, joggers, and dog-walkers joining us – as well as the occasional luxury car taking their kids to the Boy Scout camp at the end of the road. 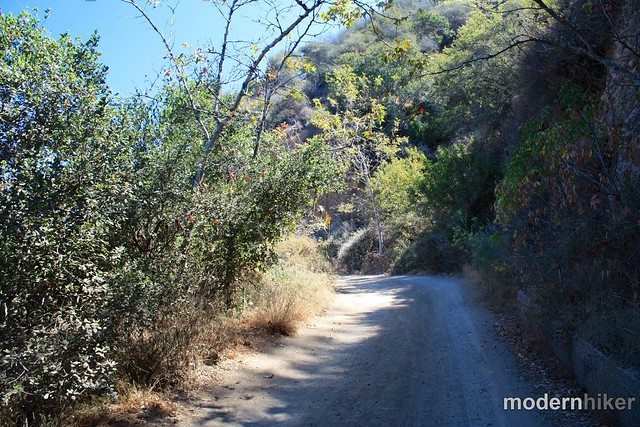 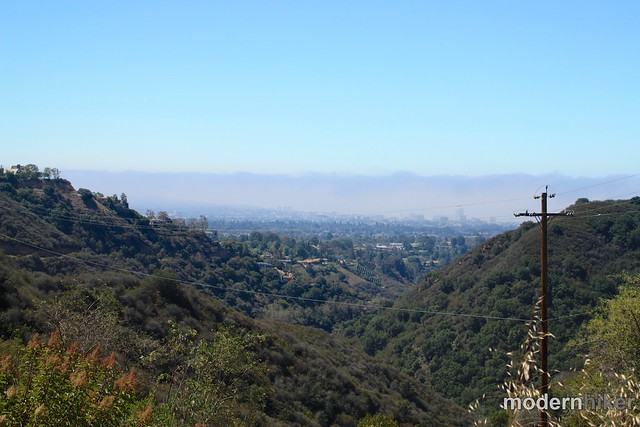 At the 0.4 mile mark, you’ll pass a large yellow gate that blocks the road to traffic, although I think anyone who goes to Camp Josepho gets the code because we saw more than a few cars make it past the gate. 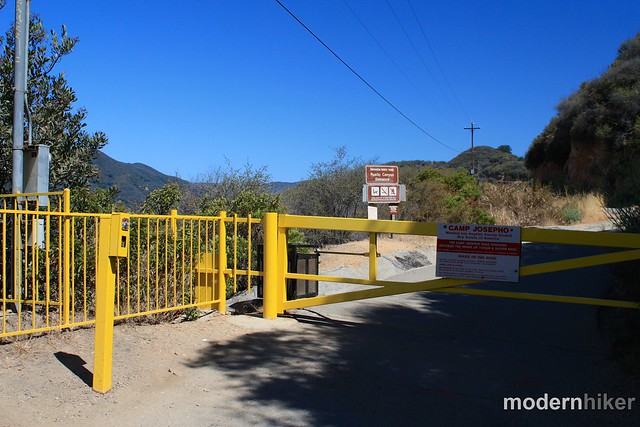 Continue hiking along the fire road. If you look to your west, you can see the beginning of the Backbone Trail on the first ridge. One part of the trail has a wooden trestle between two of the bumps on the ridgeline.

Soon, you’ll notice the fairly nondescript mountain road become framed in on the canyon side with a tall barbed wire fence. This is a little unusual, but so was the activity going on down on the canyon floor during its heyday. 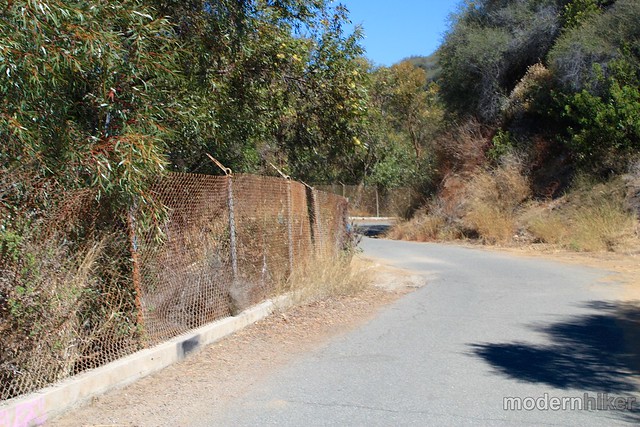 At about the mile mark, you’ll see a small break in the fence and the top of a staircase. It can be easy to miss, so keep your eyes peeled for it.

And then, get ready to go down. 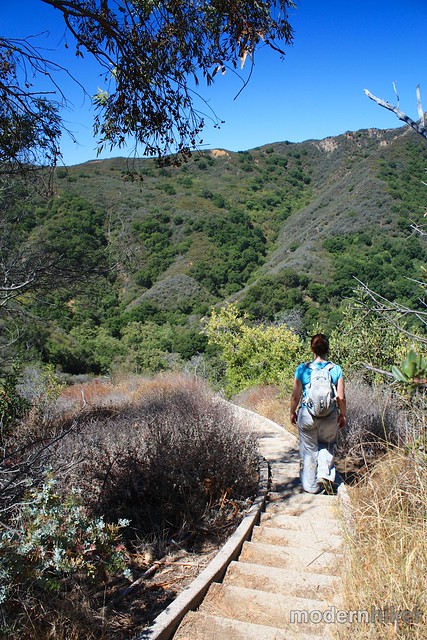 The steps are steep, narrow, and a bit shallower than you’re probably used to – so take your time on them. The stairs descend about 260 feet to the Ranch land – and at times they seem like they’re going on forever. 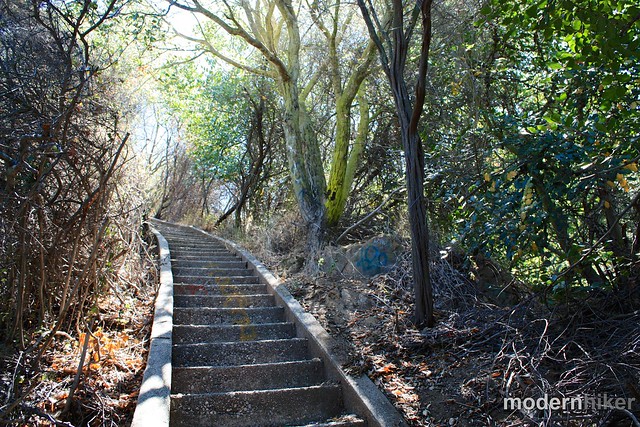 When you do finally reach the bottom of the staircase, stay to your left and continue descending on the ranch road. If you stay to your right, you’ll pass a few ruined structures and some old ranch equipment, but the really interesting stuff is further down inside the canyon.

At the 1.3 mile mark, stay left at the fork in the road. Veering right will take you to the ruins of one of the compound’s several terraced gardens, but left takes you down toward the diesel powerhouse and bomb shelter. Ignore all the side-trails leaving the main path and eventually you’ll come upon this: 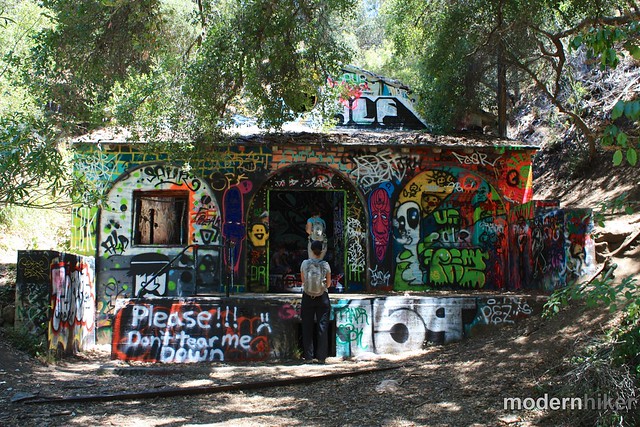 You can enter into this building fairly easily and most of it’s still in good condition. As you can see, the place has been reclaimed by graffiti artists of varying degrees of talent – some of the stuff is pretty cool, others not so much – but I imagine all of the artwork in here is pretty transient, covered by those who come after. 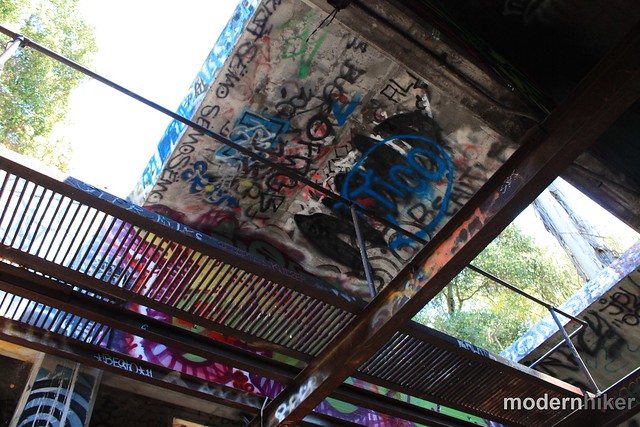 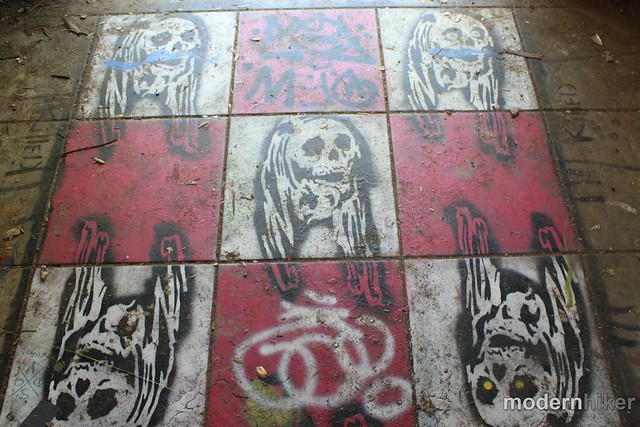 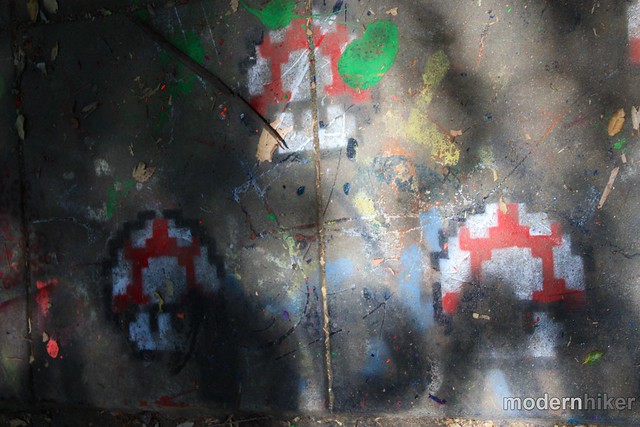 When you’ve had your fill of the powerhouse, continue on the road, passing a few more staircases that will take you back up to the gardens. Just around the corner, you’ll come upon the next major building ruins – of a machine shed. 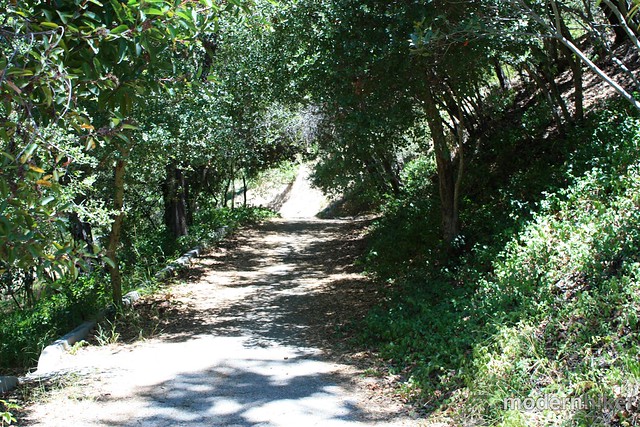 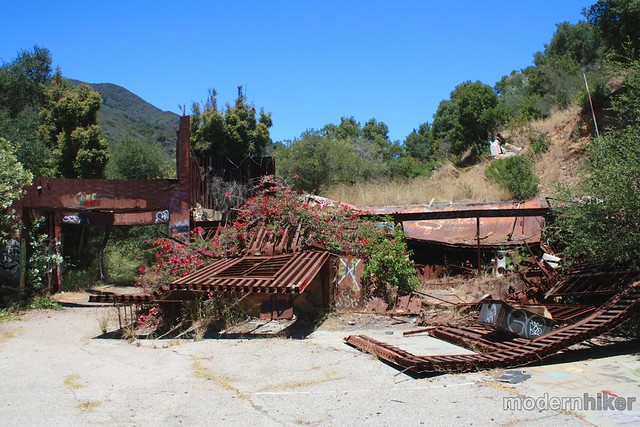 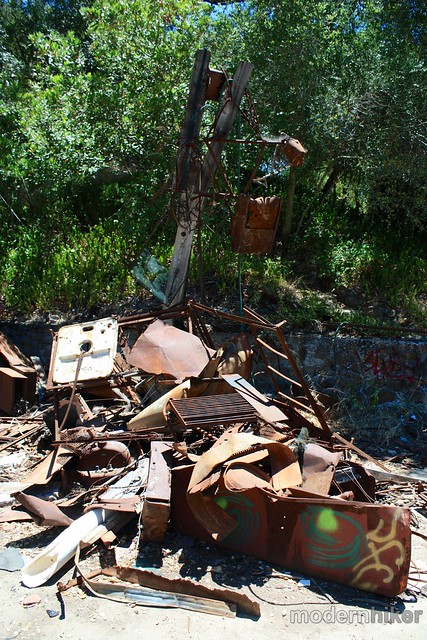 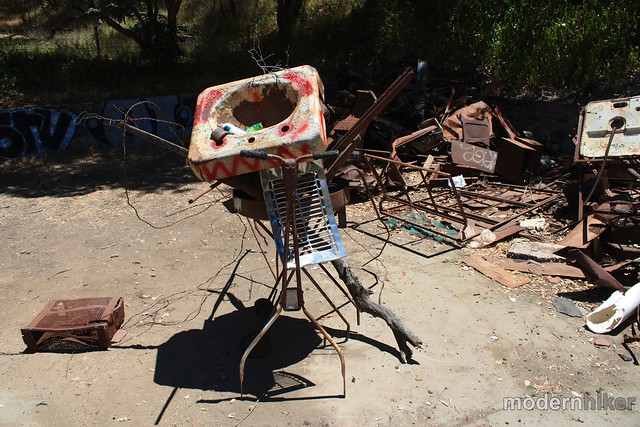 From here, the trail continues – although depending on the time of year it can get pretty unpleasant.

The route continues along an old road grade just past the machine shed, although that road grade disappears fairly quickly and the trail becomes and indistinct single-track. Be sure to check for ticks after you hike through this stretch! 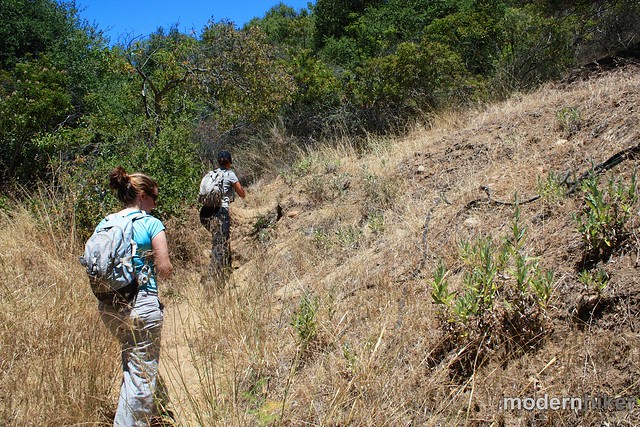 At about the 1.5 mile mark, the trail leaves the road bed entirely and hops right into the bed of the creek. When we were there, the water had all but disappeared in the dry season, but if you hiked this route in the winter or earlier in the spring, you might be trudging through some water for a little while. 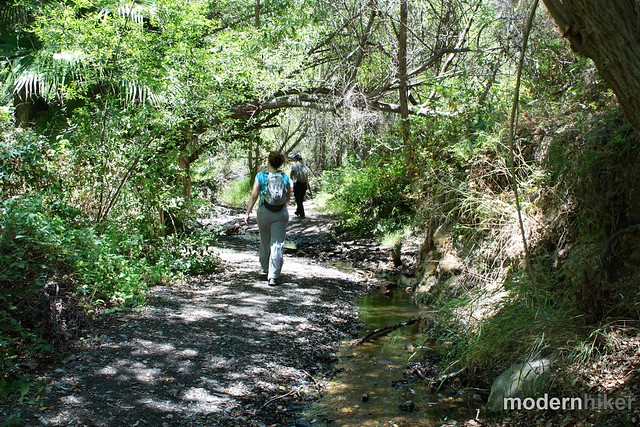 In another tenth of a mile, keep an eye out for a path leading east out of the creekbed and back up the old road grade. From there, continue in the same direction on the road. At about the 1.8 mile mark, you’ll see a clearly labeled signpost pointing you in the direction of the Backbone Trail. 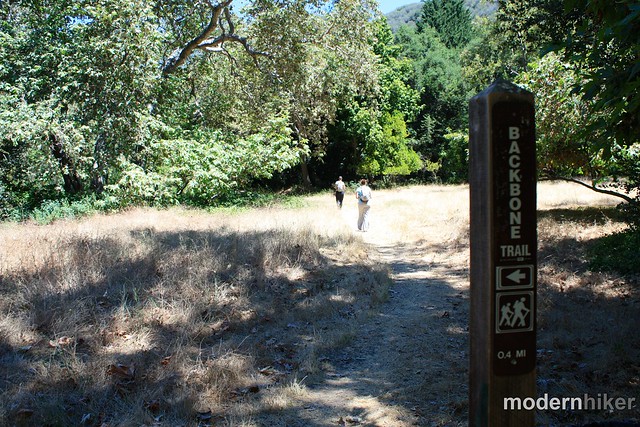 … but more importantly, you’ll see this: 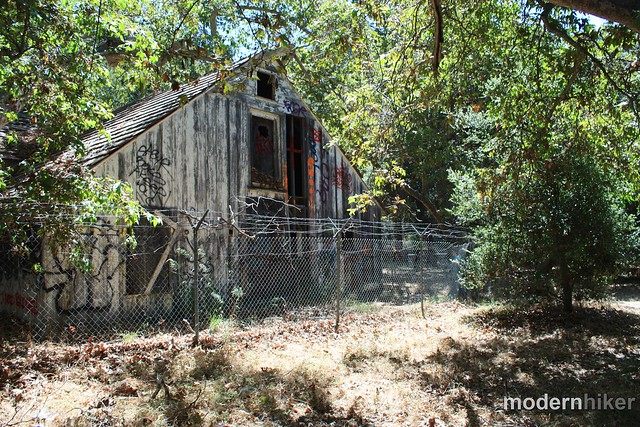 I’m not entirely sure if this stable was on the original Murphy Ranch property or part of the artists’ colony that sprung up afterward. It’s surrounded by another barbed wire fence, but there’s a gate that’s very easy to get through. You can wander around the building at your own risk – the back end of the roof has collapsed into the structure, and there are a few bees’ nests hidden around, too – but it’s pretty neat inside. 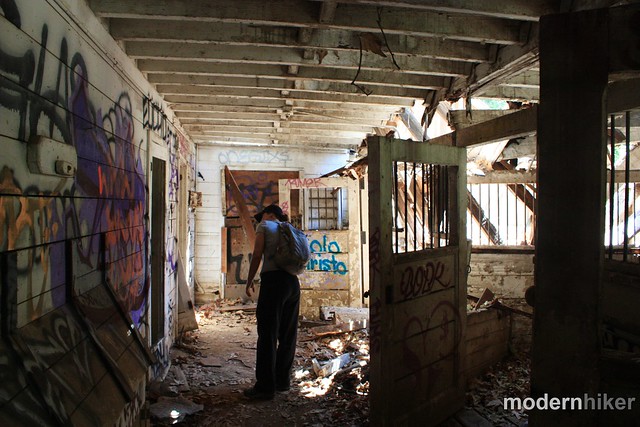 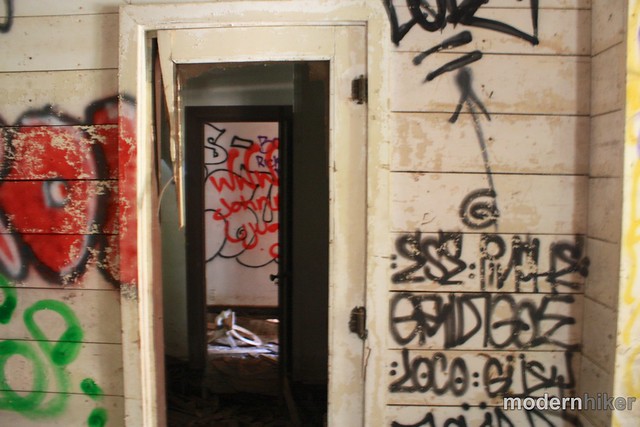 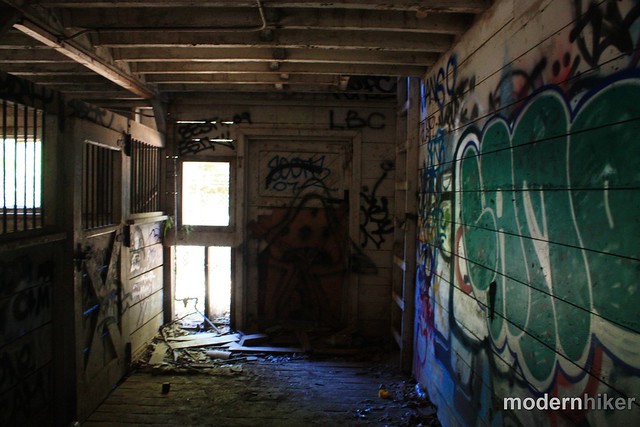 When you’re done exploring (or not exploring), continue on the road. There’s a big field just outside the stables, and if you look closely at the small pine tree in the middle of it you can see it’s been permanently decorated with Christmas ornaments.

You may also notice that the surrounding trees and plants don’t really feel like the stuff you’d normally see in the Santa Monica Mountains – there are a lot of pine and fir trees, and lots of other non-native species from former landscaping designs that have now become part of the landscape. It’s kind of disorienting – we often remarked how it felt more like we were hiking up in the higher San Gabriels or Sierras than in the coastal ranges. 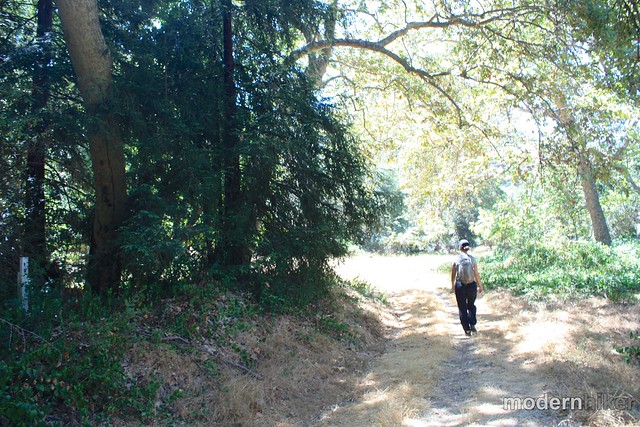 Stick to the road on your way back up – ignoring the small use-trail that heads north into the canyon around mile 1.9. At the 2.2 mile mark, veer left at the fork in the road to continue ascending. Soon, you’ll pass a very large water tank and at the 2.3 mile mark you’ll see the original wrought iron gate to the ranch itself. 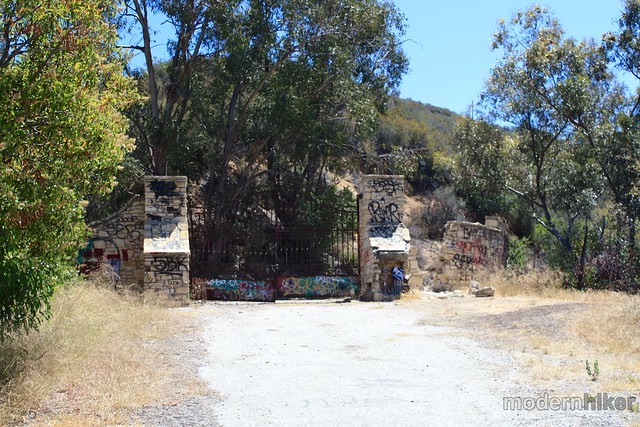 Hop through the gate, peer back to admire the craftsmanship and then continue back on the fire road back to your car. 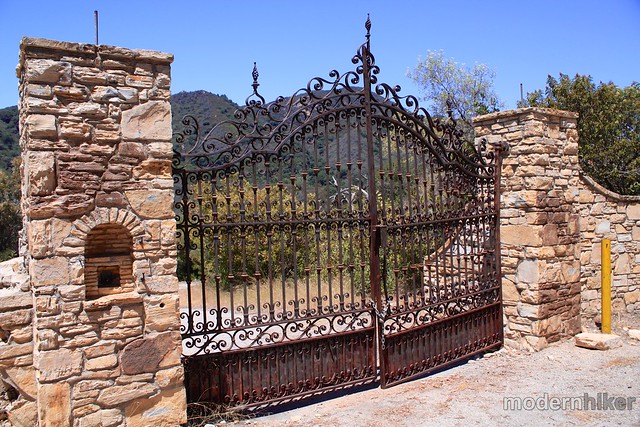 Be prepared, the hike back feels long – partially because it’s all on paved road, but partially because the beautiful coastal landscapes you see don’t really compare to the weirdness you just hiked through on the canyon floor.

Moderate. Some trails are clearly marked - especially the routes to Will Rogers State Park and connections to the Backbone Trail. But the areas inside Murphy Ranch are very easy to get lost in - there are a lot of overgrown routes, abandoned buildings, and staircases that don't seem to go anywhere. Just pay attention to your surroundings.

From the 405, head west on Sunset and take a right onto Capri Drive. Follow this road through a few unusual intersections until it ends at Casale Road. The trail is to the left, but there's no parking on that part of the street. Turn right onto Casale and park on the street. No permits are required. Transit accessible. Can also be hiked to from Will Rogers State Park.

Parking tickets for cars parked on Casale in red zone or for more than 2 hours. Access through Rustic Canyon or Will Rogers instead.

Everyone is different - I've had trails labeled easy and gotten some nasty emails saying how tough they were, too :). I try to find a balance for the "average" Angeleno hiker but that can be tough to do. I called this one on the moderate scale because as its described, it does do the stairs - and because in the stream bed there can be some bush whacking involved.

Thanks for adding your info, though! I always appreciate when people add their own thoughts so other readers can get a view of the trails through different perspectives!

I hiked this trail today with my daughter, and I would have to say that it is closer to easy than to moderate. With the exception of the stairs/steps, which you can avoid by going in and out through the gate, this trail is significantly easier than Sandstone Peak/Mishe Mokwa and even Parker Mesa via Los Liones. Both of those trails are labeled moderate and will kick your butt if you aren't in shape. I enjoyed this trail for its uniqueness but it certainly wasn't challenging.

"Ms. Murphy" is mentioned in John L. Spivak's book "Secret Armies". The book is about the fifth column (Nazi spies) in America before war was declared on Germany. Amongst the other Los Angeles Nazi history in the book, they mention the lady that lives in the hills.

If anyone is interested in the history, there is a digital copy of the book at the Gutenberg Project website at this link: http://www.gutenberg.org/ebooks/22682

Hiked this trail yesterday and it was awesome! Those stairs were killer though. Counted them as I went up and there are 512 in total.

This is one of the unplanned benefits of budget cuts :) I've heard some of the buildings have been fenced off a little more comprehensively, though.

I was just there about a month ago with my dog - everything is still there.

Last I heard it was still up, although I don't think it's quite as easy to get into the buildings anymore.

I read an article about a year ago that this was going to get tore down. I am in LA now and would love to check it out if it's still there. Anyone know?