First thing’s first – you are not ever going to have this trail to yourself. Multnomah Falls is the most visited recreation site the Pacific Northwest, with more than 2.5 million people visiting each year on average. Just to put that into perspective, the entirety of Glacier National Park received 2.3 million visitors in 2015 — and here, the vast majority of those visitors are on one trail, not an entire park. (For a longer, less crowded route that ends up here at Multnomah, try out the Wahkeena Loop).

If you are visiting Multnomah Falls in the warm months (May-September), you will not be able to park at the trailhead without a free permit available here for the I-84 trailhead and here for the waterfall corridor. Additionally, if you wanted to not have to worry at all about parking, this area of the Columbia River Gorge is served by the Columbia Gorge Express, which connects with the Gateway Transit Center in Portland (connections via MAX and TriMet bus).

But don’t let that scare you – Multnomah Falls is kind of a must-see if you’re traveling through the Columbia River Gorge. It is the tallest waterfall in Oregon (and, some say, the second tallest year-round falls in the United States), it flows reliably year-round, and it’s one of those things that people will definitely ask if you’ve been to once you come home from your trip to the Northwest.

To avoid some of the inevitable crowds, get to the trailhead as early as possible … and don’t worry if it looks like it’s going to be gray or drizzly up there. Because most of the falls and trail are under a thick tree canopy, you probably won’t get too wet if there’s light rain – and gray skies will keep some of the tourists away, too. The other thing about the crowds is that the vast majority of them only make it up to the first viewpoint or the footbridge to snap photos. Once you pass that point, the throngs will thin considerably.

If you’re starting from the off-interstate parking area, look for the pedestrian underpass to begin your hike. 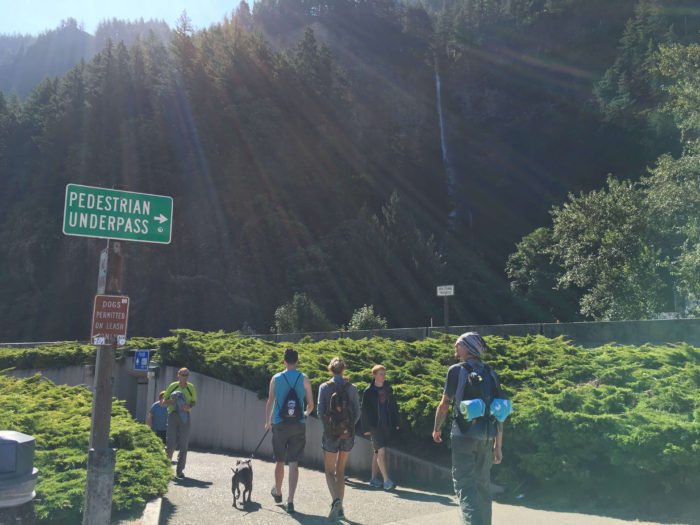 This will put you out right in front of the historic Multnomah Falls Lodge, a circa-1925 day lodge that still functions as a restaurant and National Forest visitor center. 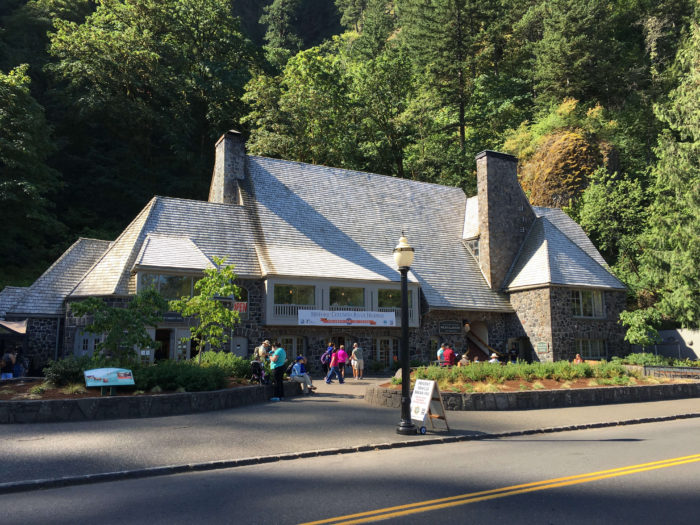 The building itself is beautiful and most definitely worth a visit – but if there aren’t a ton of people heading toward the Falls on the trail, you should take advantage of that situation and do the hike first.

The path begins just to the east of the Lodge on a short set of concrete stairs. And almost immediately, you’ll get that picture perfect view of the tiered falls cascading behind a beautifully constructed stone bridge.

I mean, it’s hard to argue with that, right?

Continue on the paved trail leading west, and you’ll start your climb up toward the top of the falls. The canopy here – and in most places in the Gorge – is pretty dense, so expect the temperature to be a bit cooler than it is out in the direct sun. This cooling effect is even more pronounced if you’re downwind of the Falls themselves.

At the 0.3 mile mark, you’ll reach that iconic stone bridge crossing in front of the falls – and likely, the crowds that gather here for photos. 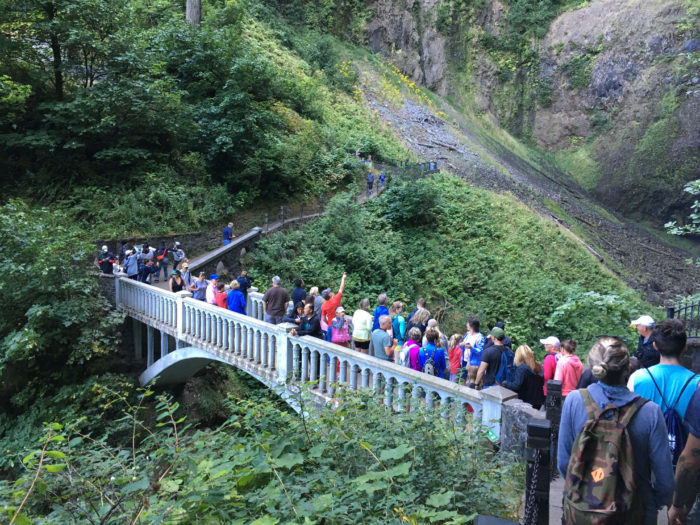 So it can get a bit crazy here, yes. It can also get geologically active. In 1995, a bus-sized boulder dropped into the pool below the falls while a wedding party was taking photos on the bridge. In 2014, a smaller boulder took out a chunk of the bridge itself, closing off the route until repairs were made. So snag your snapshots and keep on hiking.

As with most high traffic trails, once you reach the main photo-shooting spot and / or reach a section of noticeable incline, the crowds tend to dissipate. Here, that spot is the bridge.

After this, the trail makes a relentless climb up to the top of Multnomah Falls, and although it’s paved and not terribly tough, it is significantly more difficult than the short path to the bridge.

Keep an eye out for the ubiquitous blackberries just off the trail, as well as the less conspicuous and significantly less edible white snowberries (those ones have a touch of cyanide in them so you won’t want to snack). 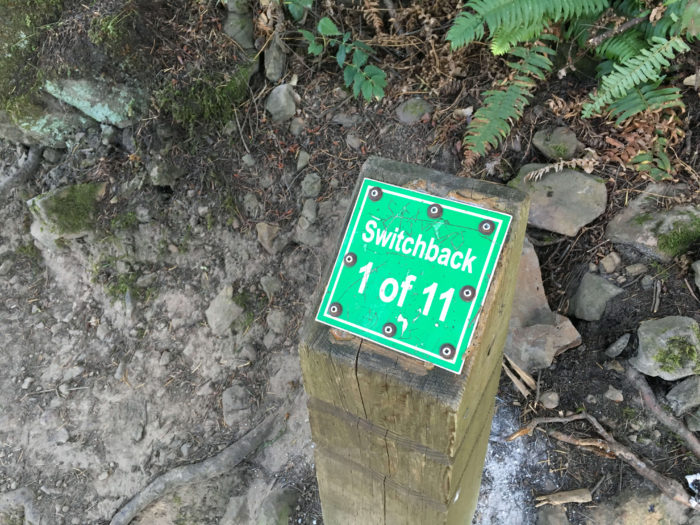 helpful signs along the way, unless you don’t like knowing how many switchbacks are left on your hike …

At about the 0.45 mile mark, you’ll reach a junction with the Gorge Trail 400. Ignore this and stay to the right, heading toward the Multnomah Falls Overlook on Larch Mountain Trail 441.

The trail goes up … and up and up and up, but under the shady cover of trees so at the very least it should remain temperate during your climb. 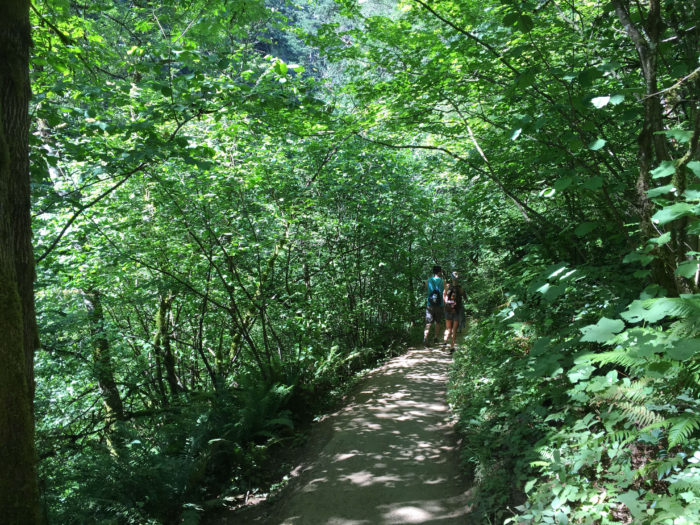 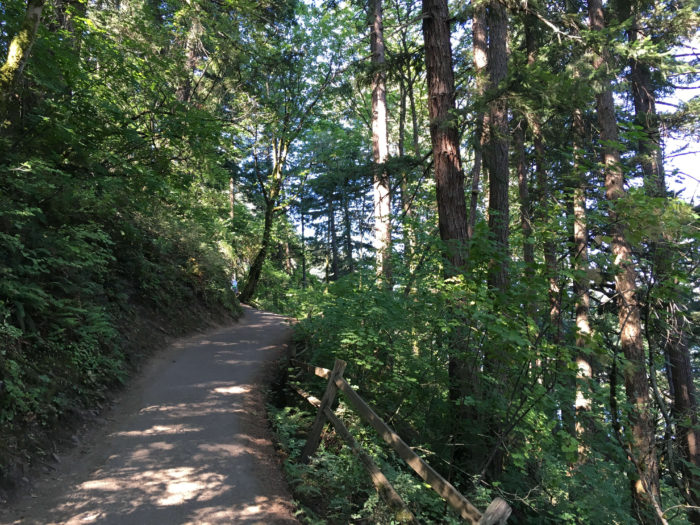 The trail reaches its highest elevation at about the mile mark, then makes a short descent. About 0.1 mile past this point, keep right to head on the small spur trail to the Multnomah Falls Overlook point, where you can get a hair-raising view from the edge of the falls. 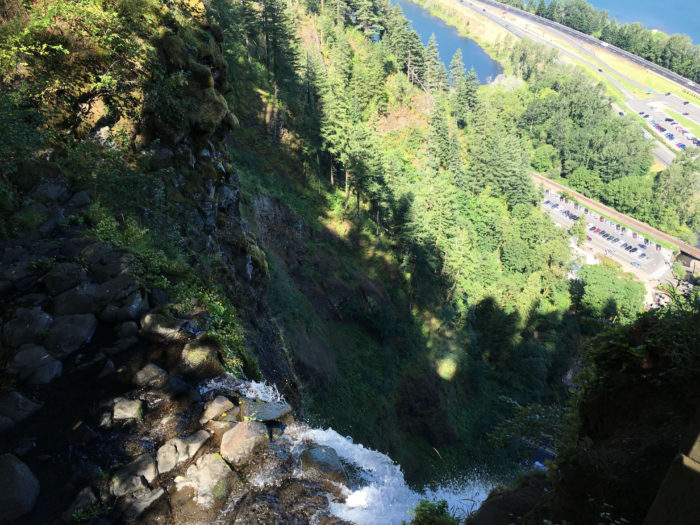 Once you’re done here, don’t forget to take a few minutes to meander along Multnomah Creek above the falls. The water flow is gentle enough to dip your head in without too much worry (most of the time!) and the forest here is lovely. When you’re all done, return back the way you came in. 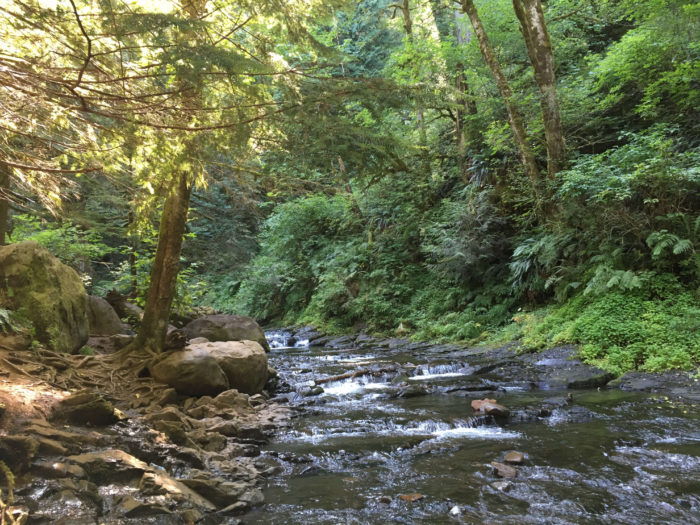 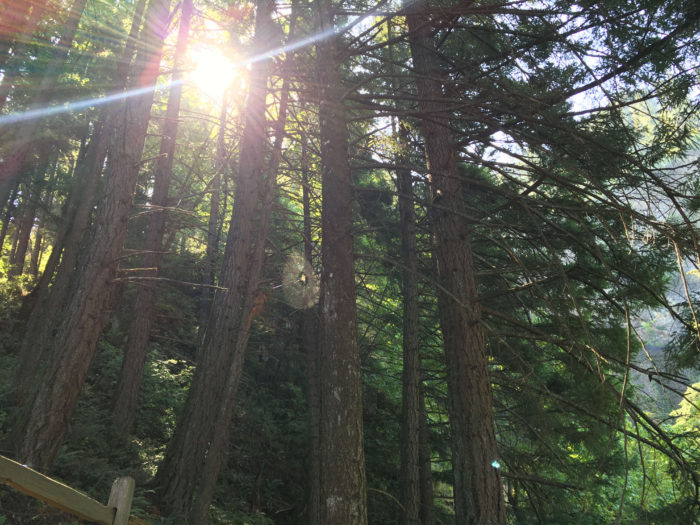 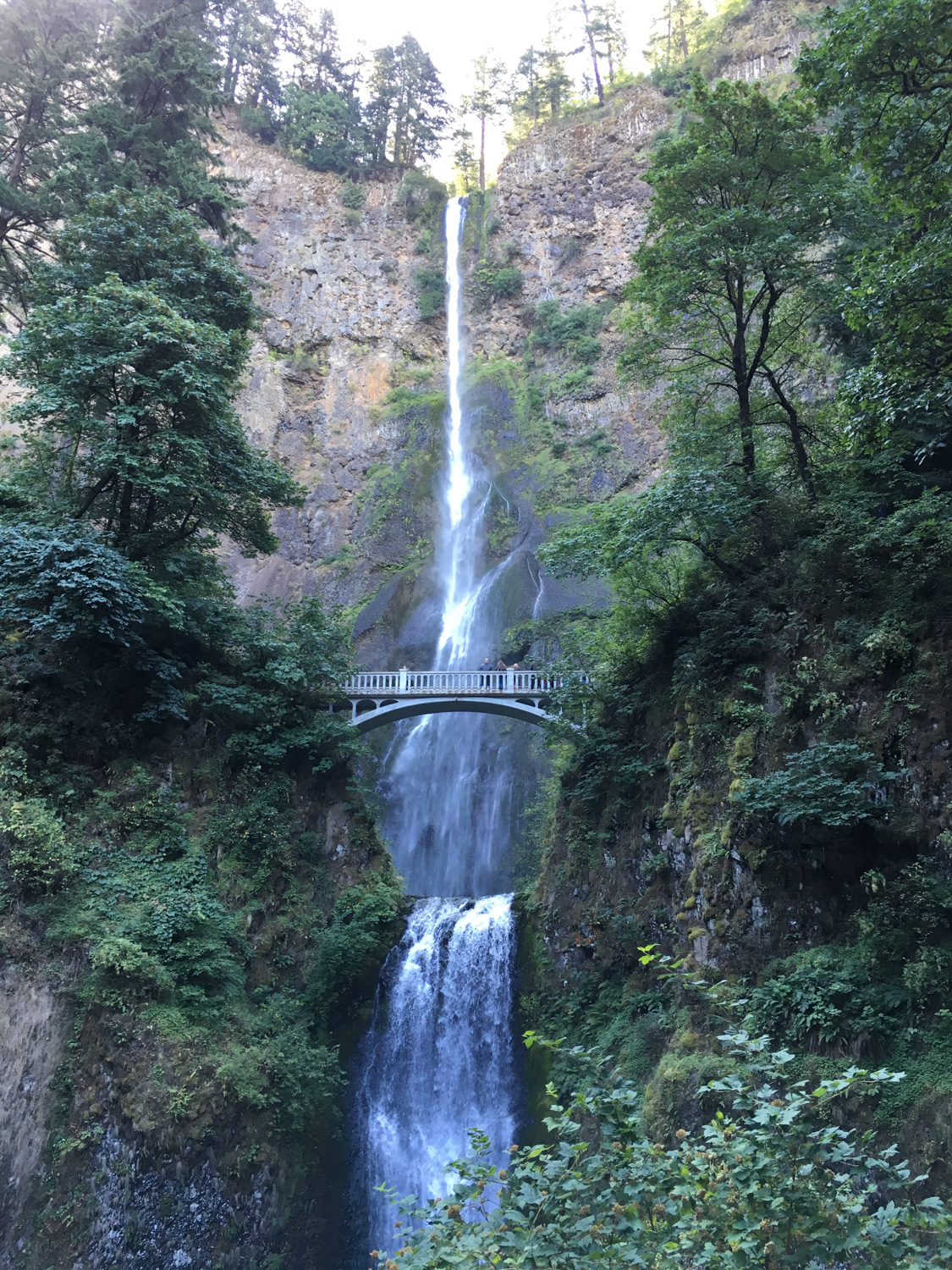 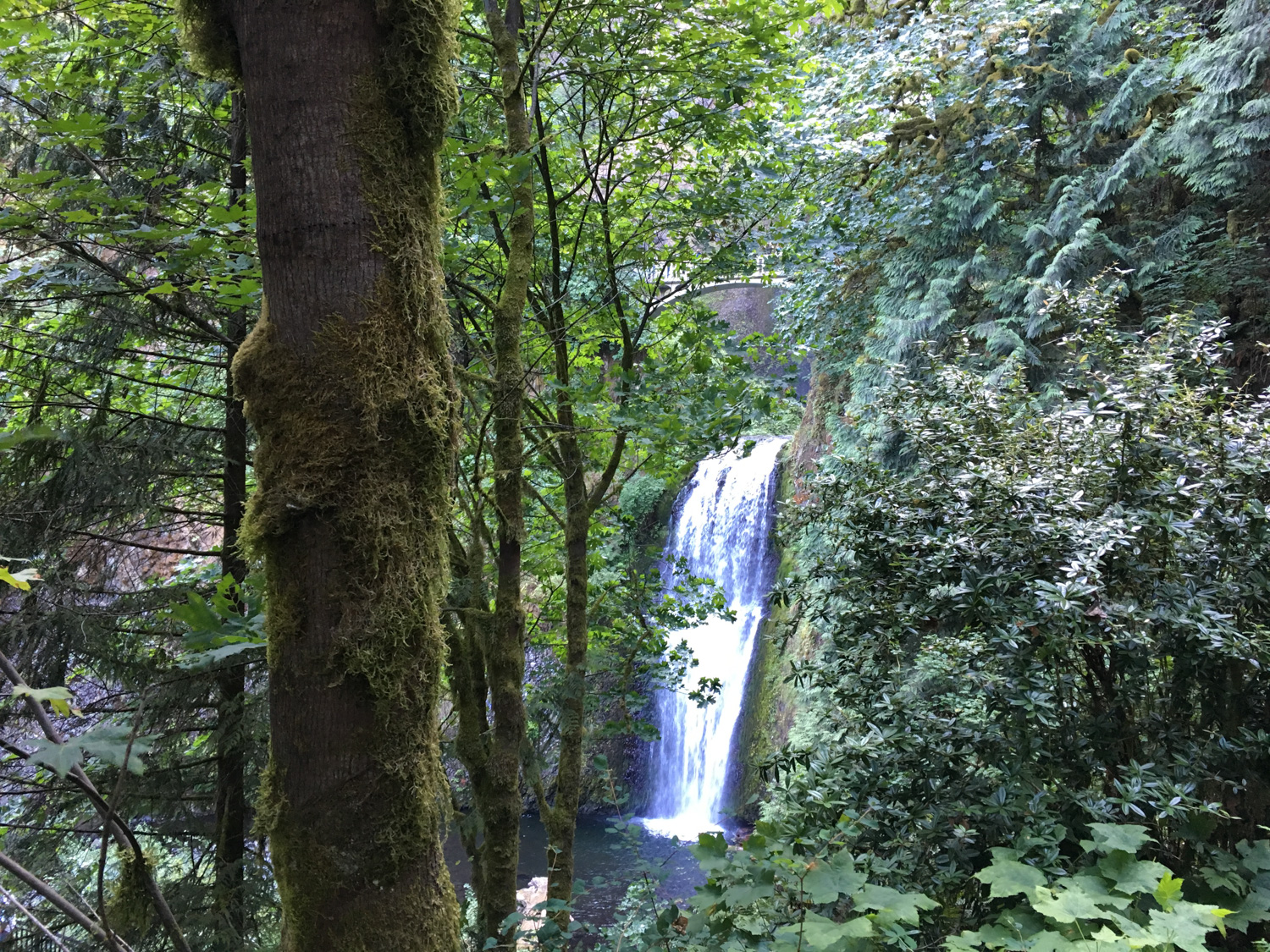 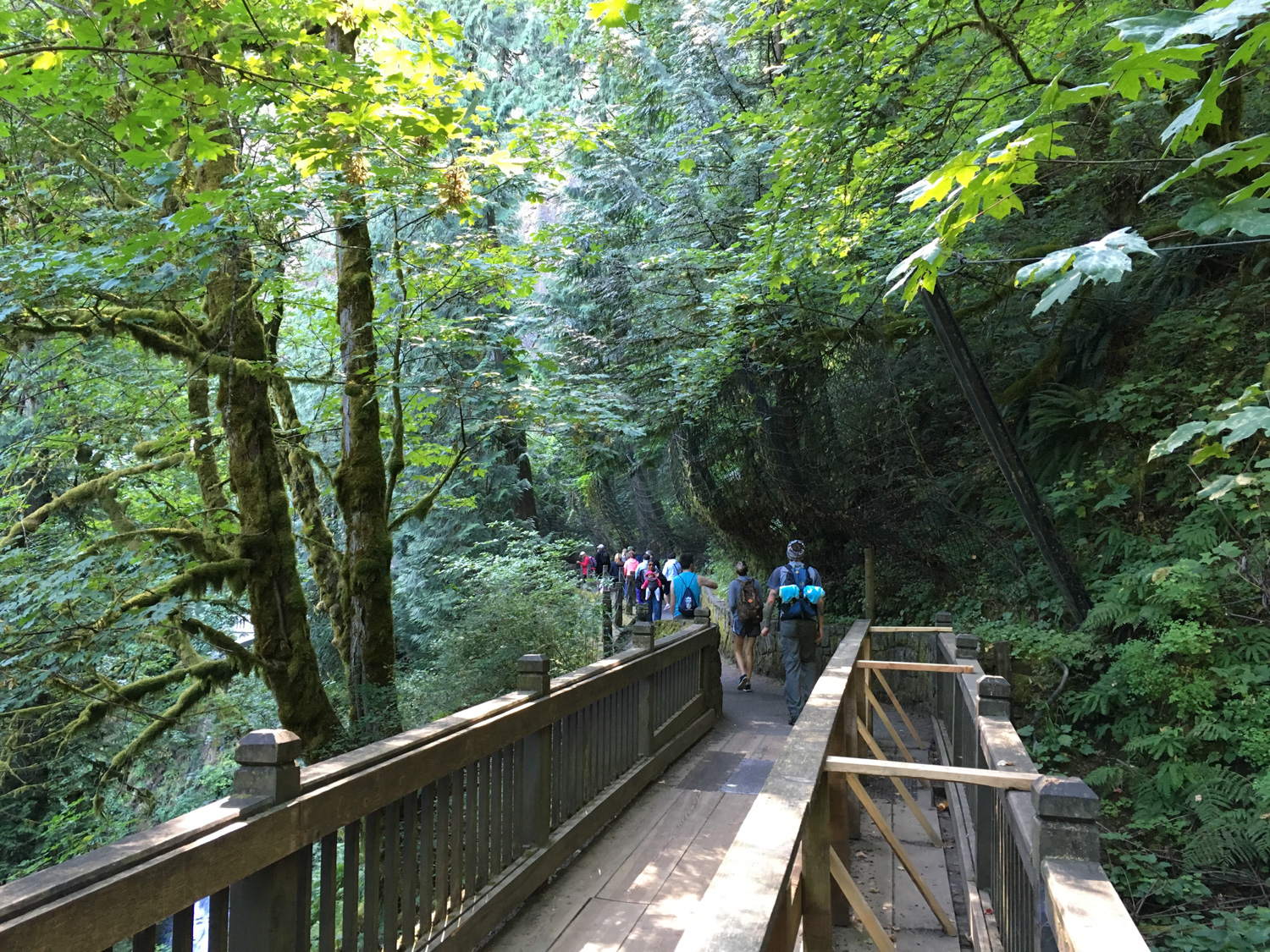 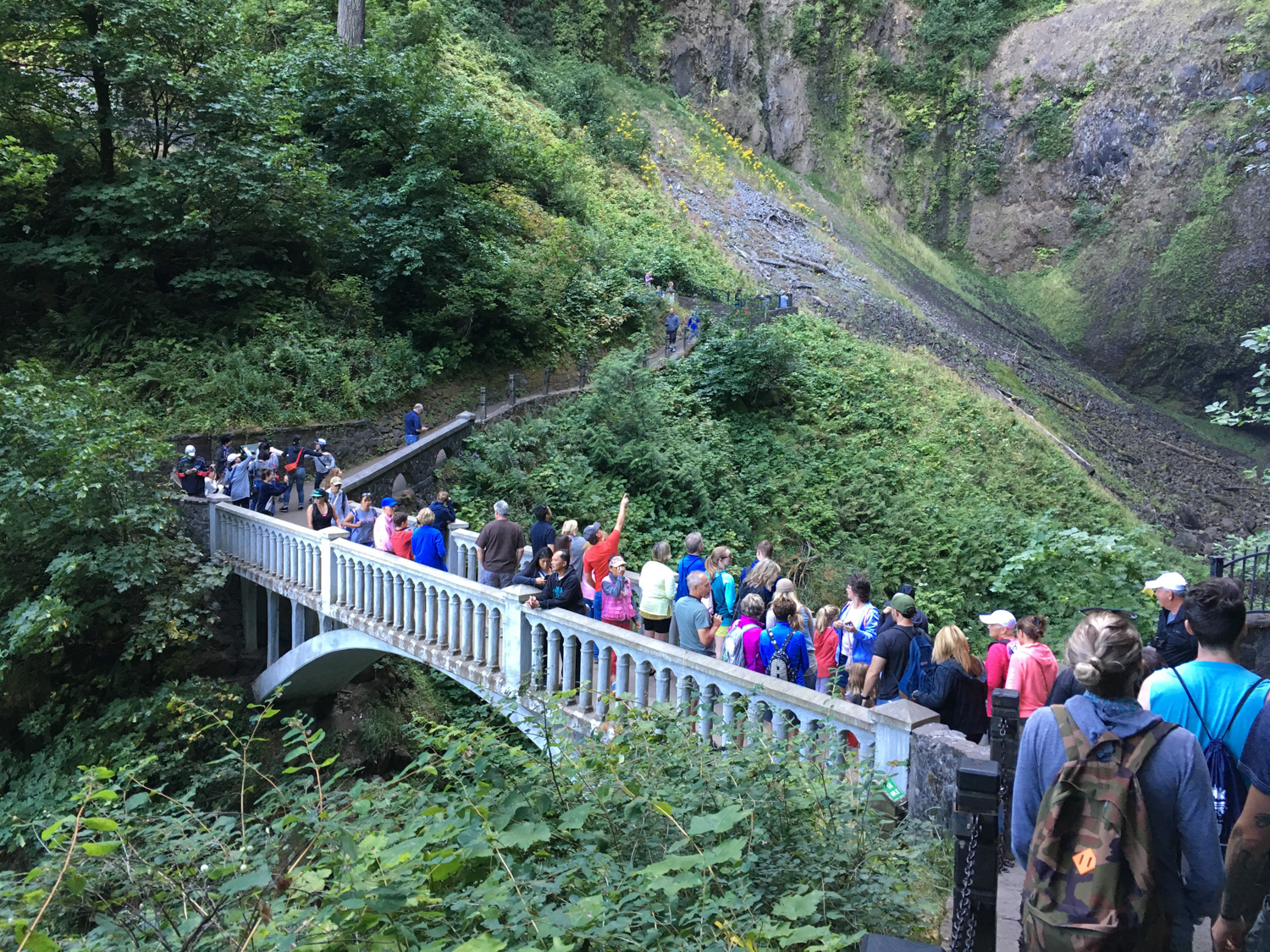 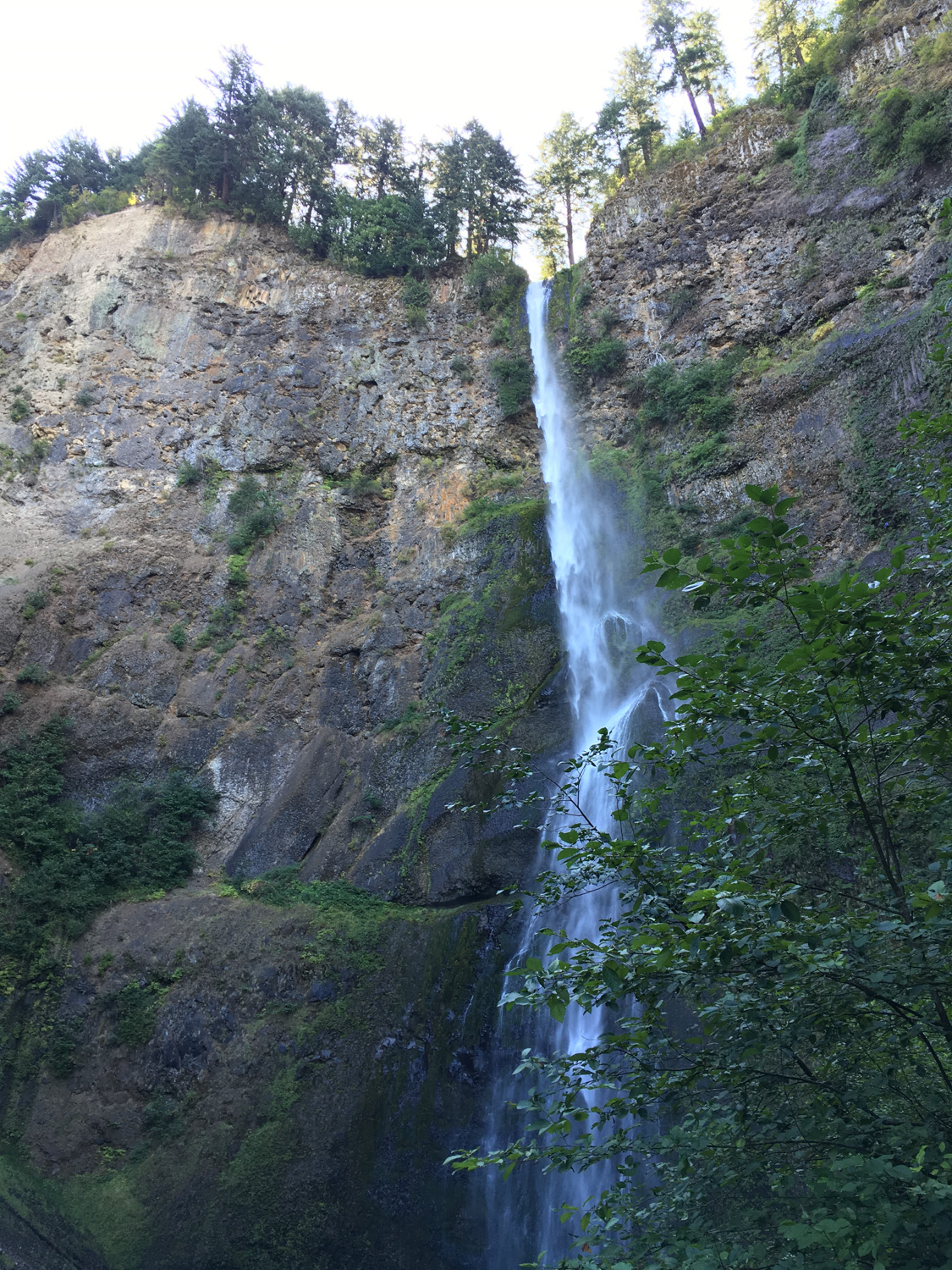 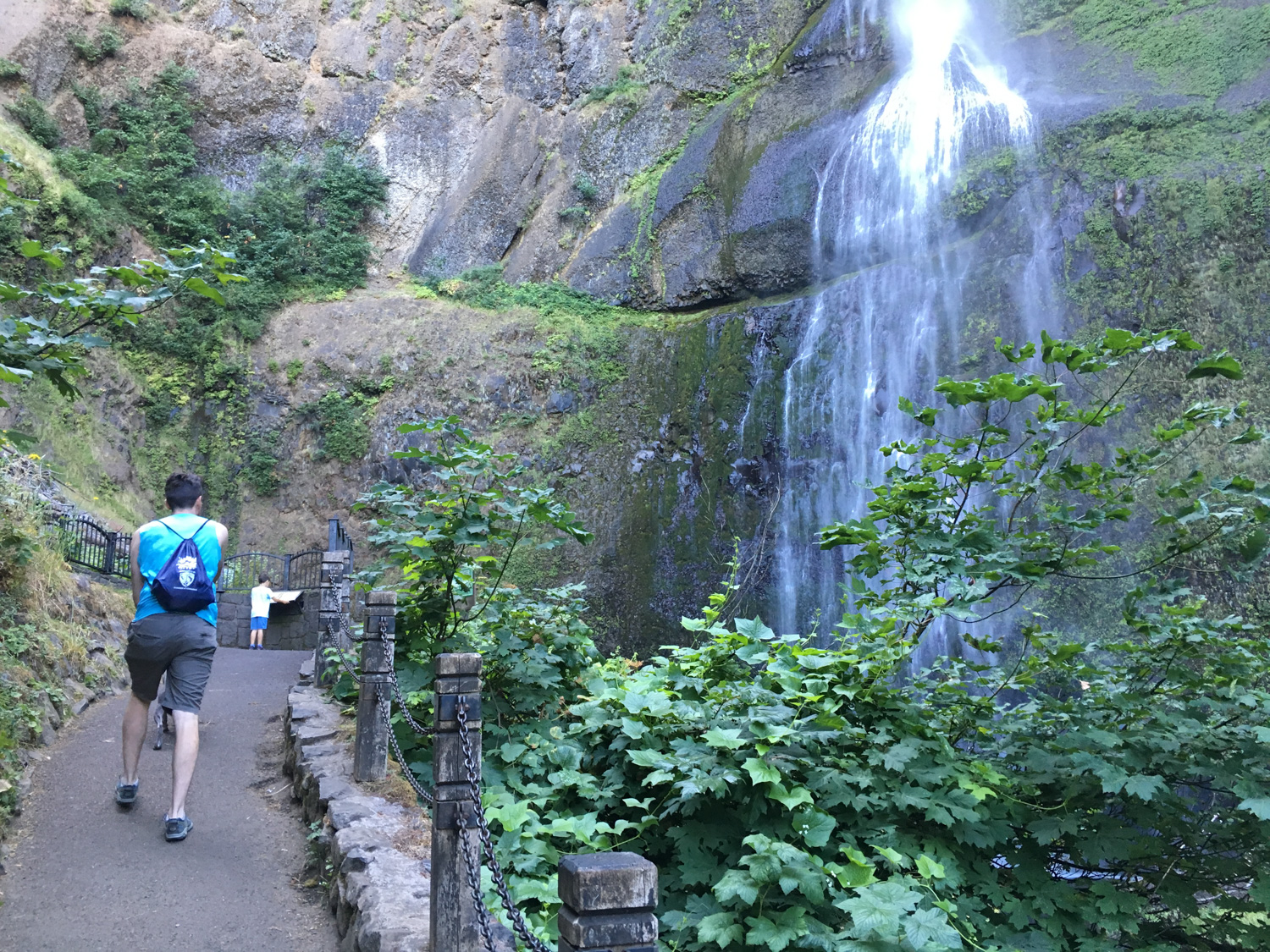 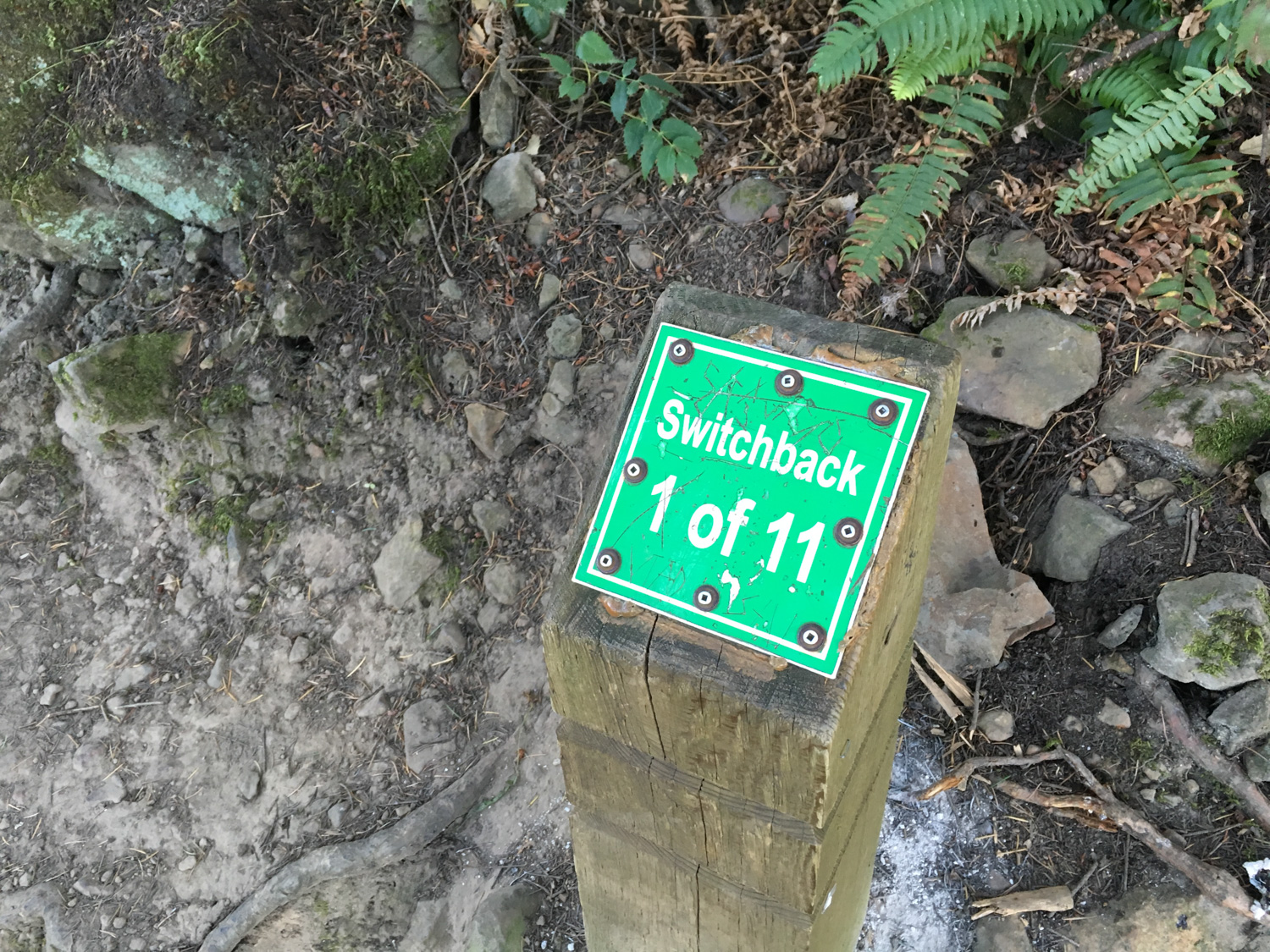 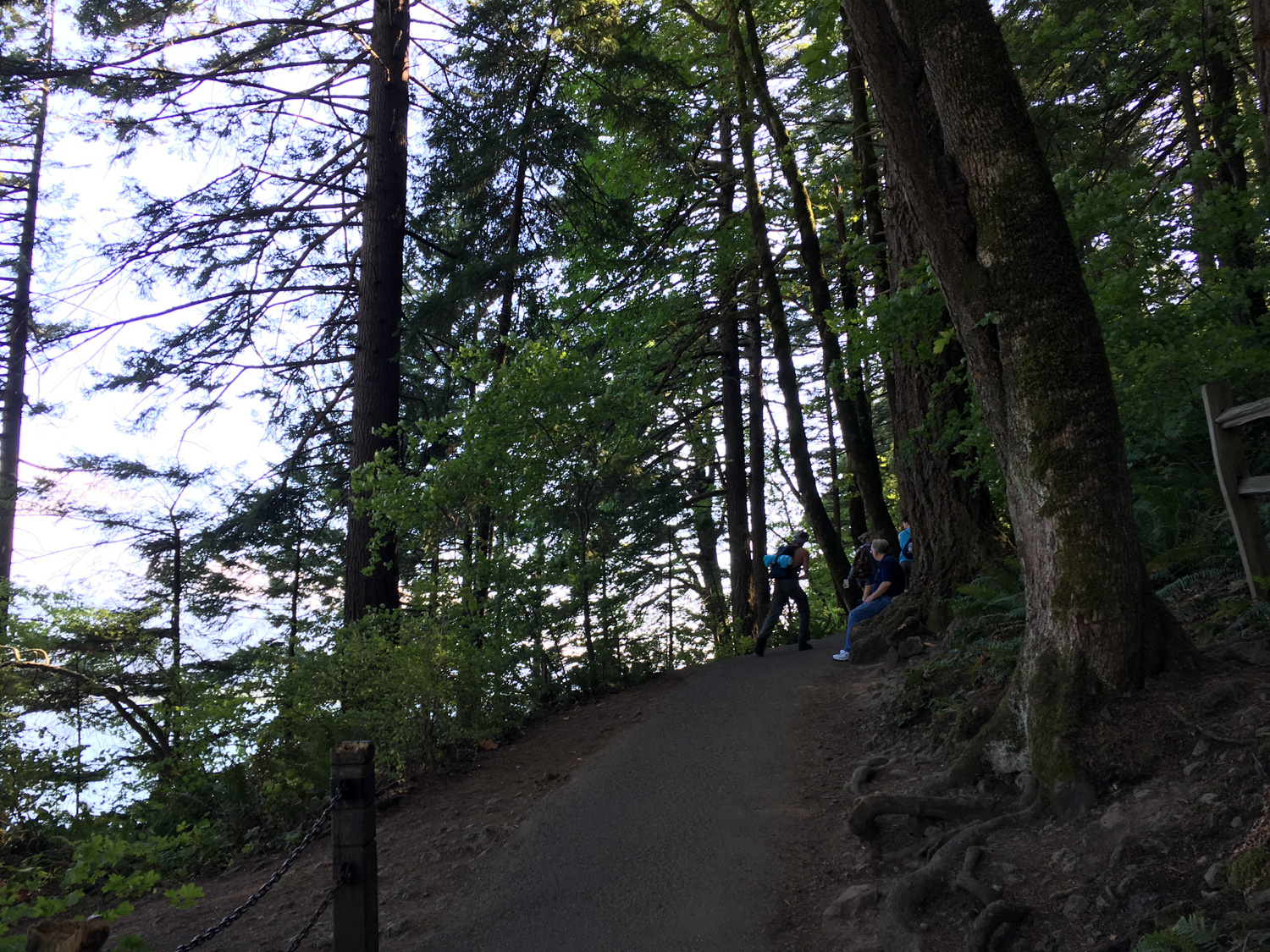 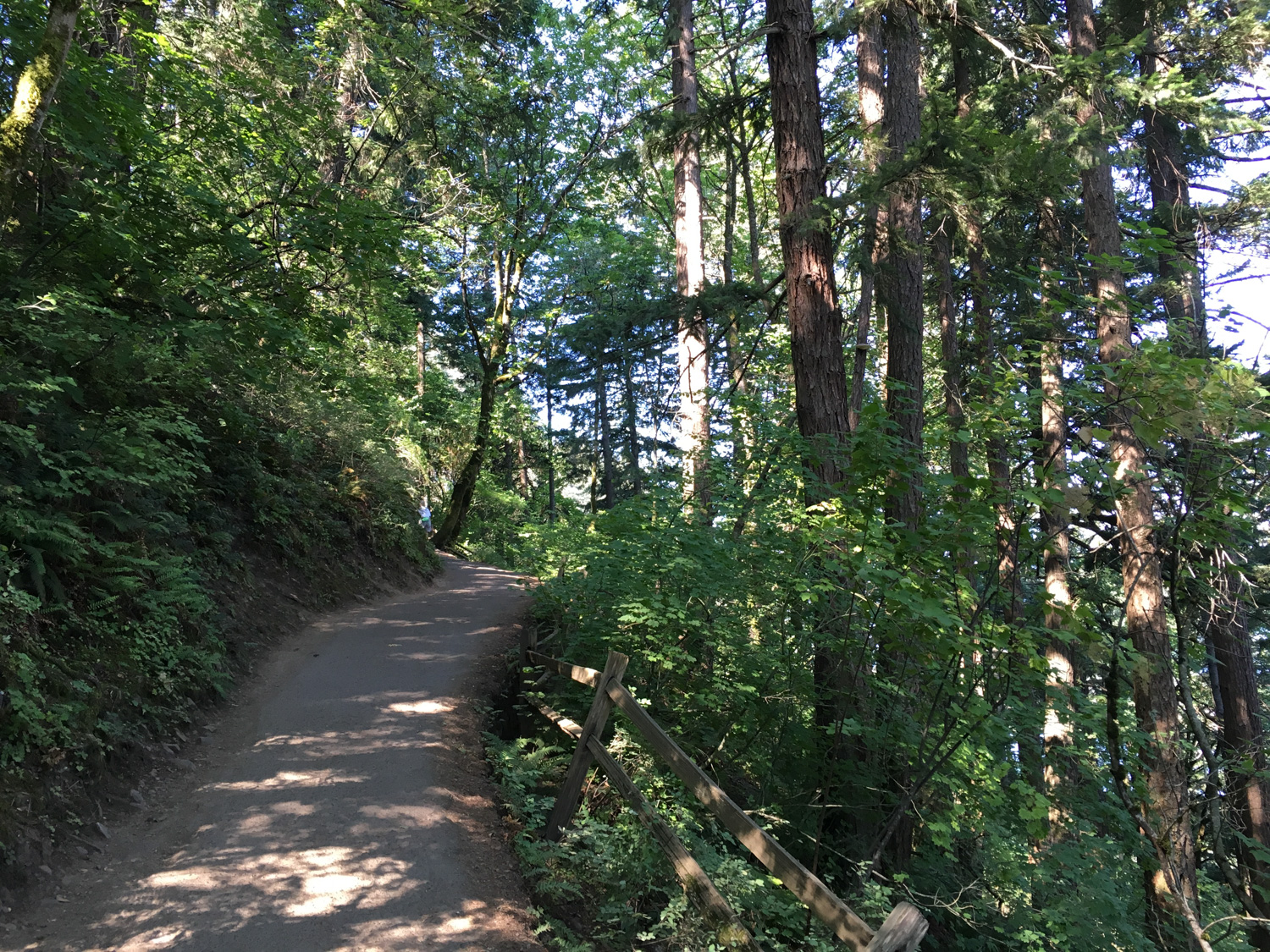 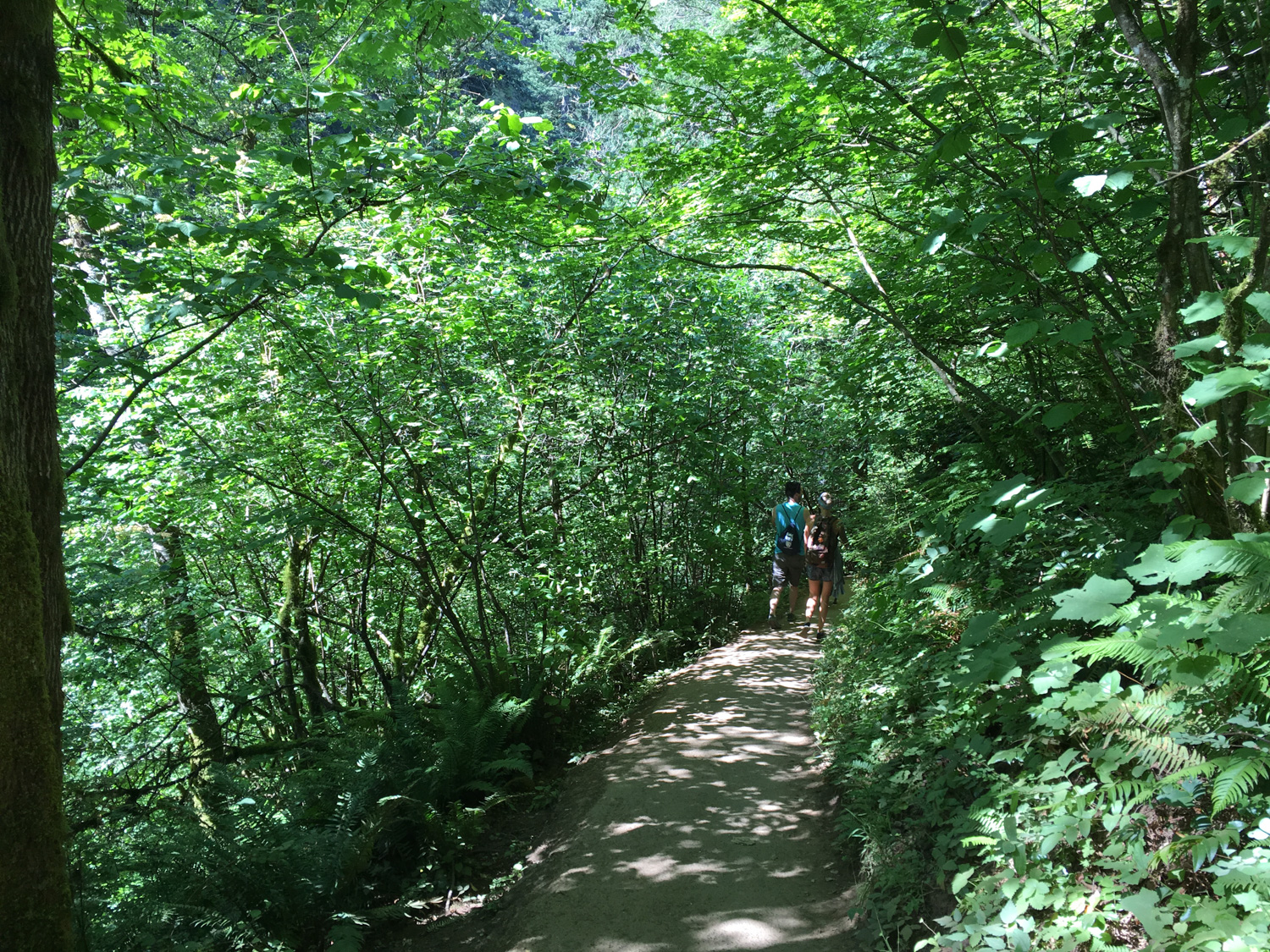 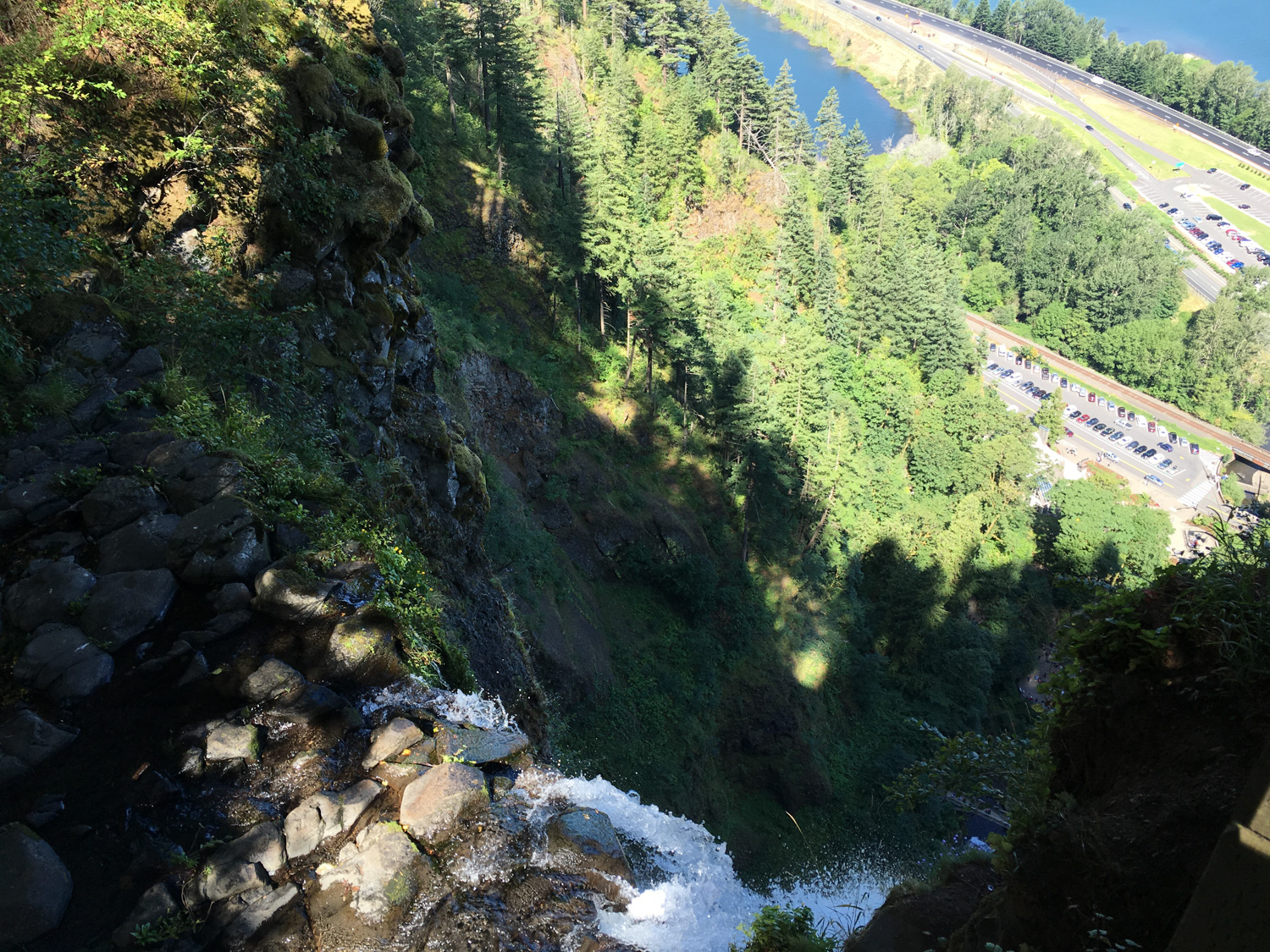 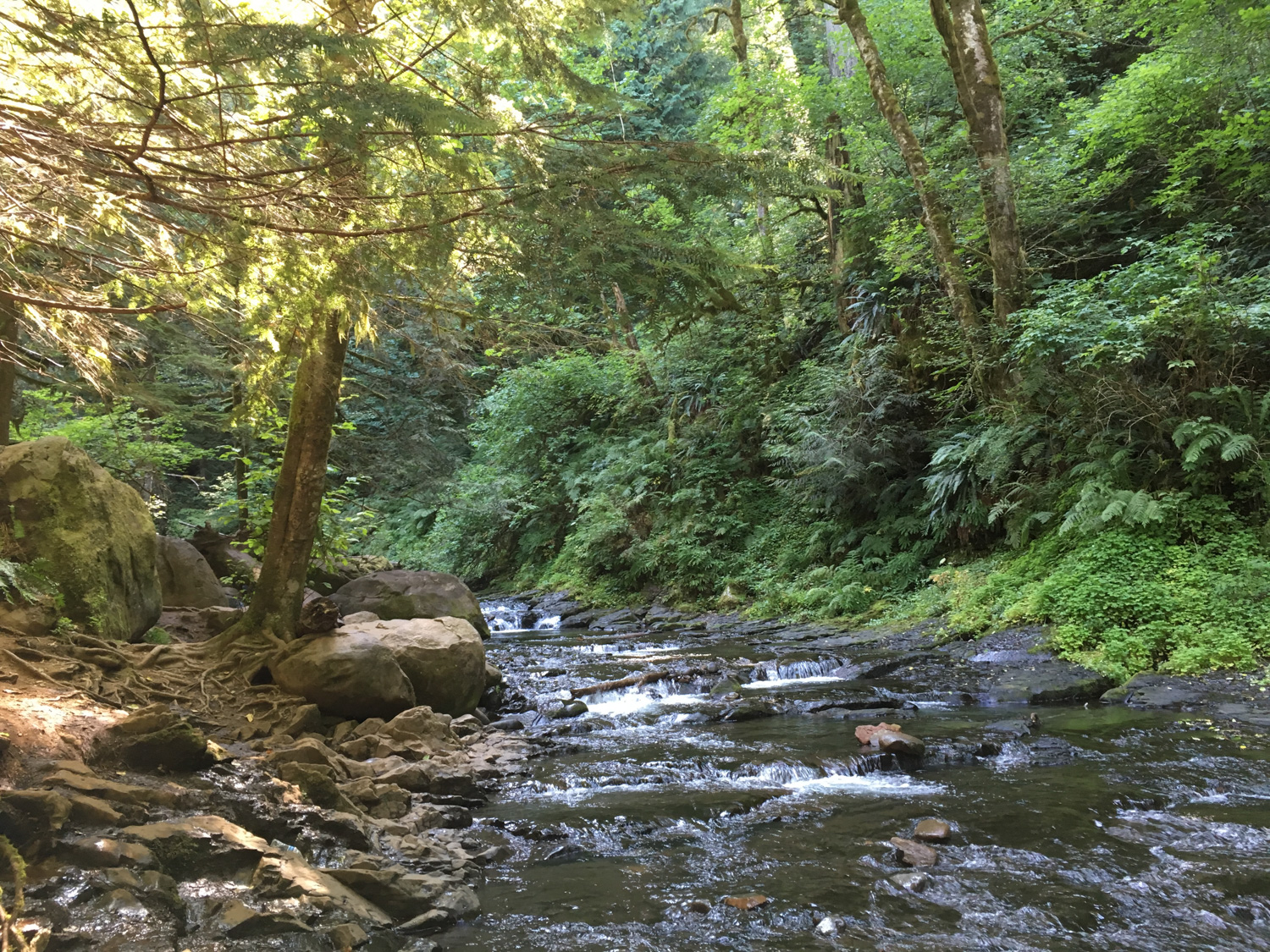 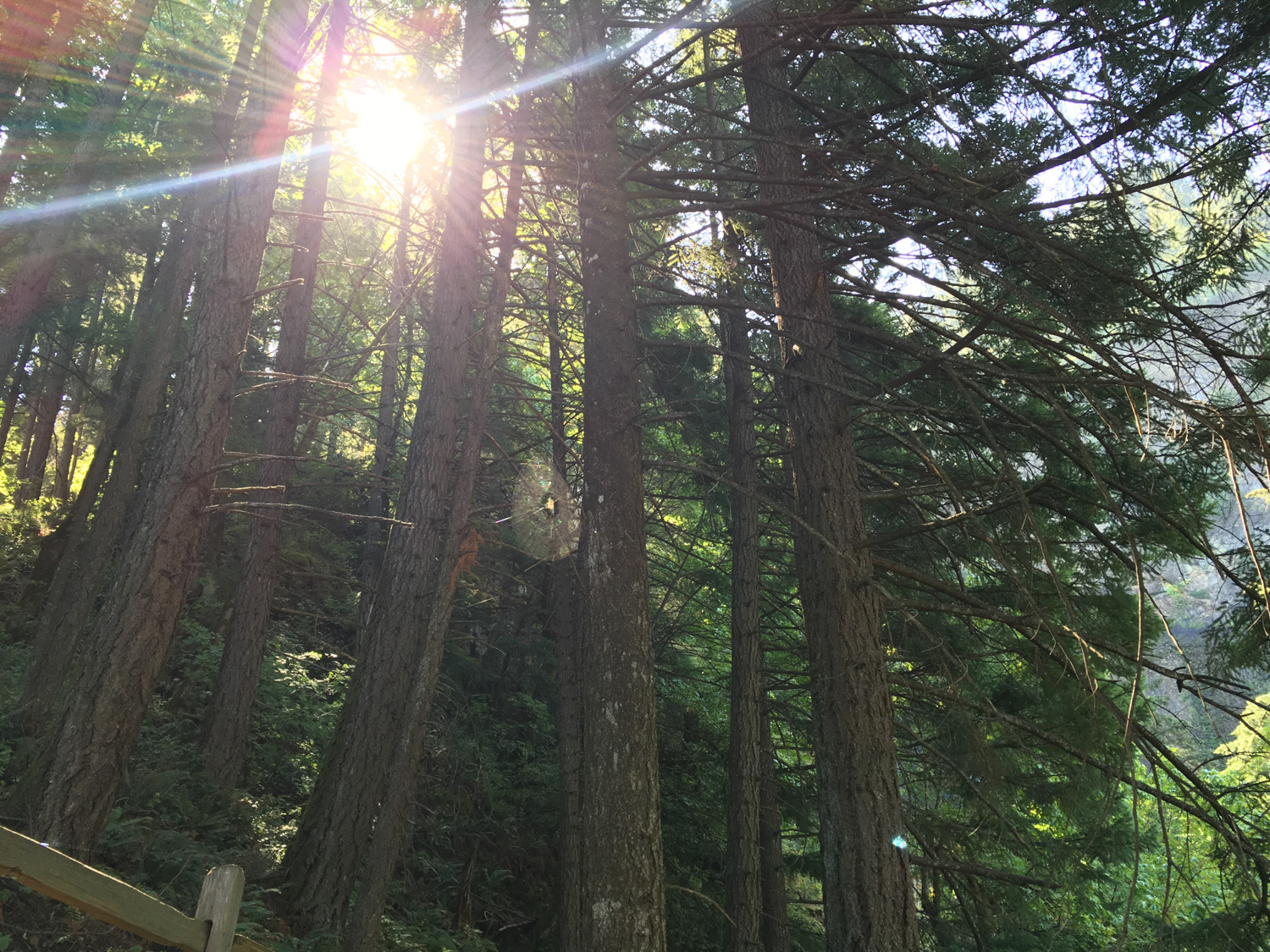 Lower portions are fully accessible. Past the first overlook, the trail is paved, then dirt single track that is well marked and well traveled.

From Portland, head east on I-84. Take exit 31 and you'll arrive at the larger parking area between the interstate lanes. A pedestrian underpass will take you to the trailhead. You can reach the smaller parking area near the Multnomah Falls Lodge by taking exit 28 toward Bridal Veil and continuing east on the Historic Columbia River Highway for approximately 3 miles. Reservable Permits required May-September.