Before the arrival of Europeans, ancient Mauians needed to find a way around a particularly rugged stretch of coastline dominated by sea cliffs, jagged lava outcrops, and rough surf. If one of these Hawaiians was not lucky enough to know somebody willing to lend a canoe, they’d have to find another way to get around this inhospitable terrain. The early Mauians solved the problem by pounding a rugged, sun-blasted foot path that climbs up and over a series of undulating ridges. 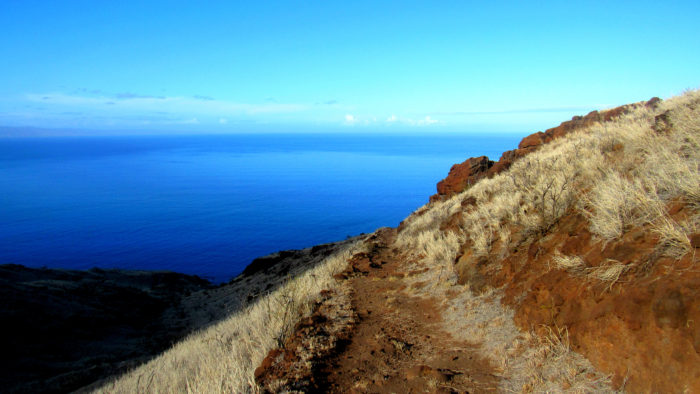 Fast forward to the turn of the 20th century when European settlers came to dominate life on Maui. The means of transport had changed somewhat with mules and wagons supplementing the soft thuds of footfalls. However, road-building technology had not yet reached a point where engineers could carve a highway into the cliffsides. Europeans continued to use the Lahaina Pali route as the sole means of transit between Ma’alea and Lahaina. 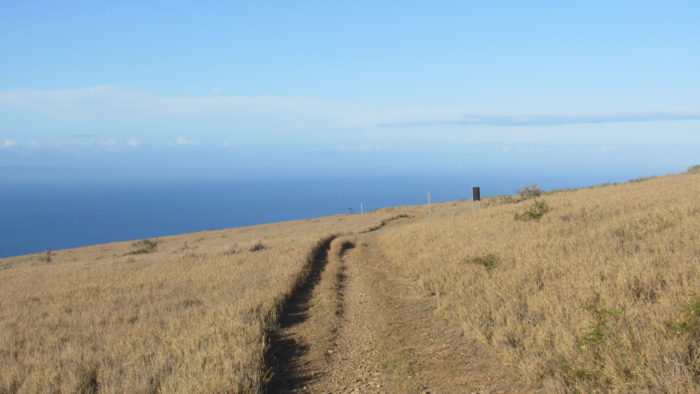 Eventually, engineering savvy led first to a twisting route that ducks into and out of gulches along the shoreline. Engineers later abandoned this route in favor of today’s Honoapi’ilani Highway, which now allows motorists to pass between Ma’alea and Lahaina in a matter of minutes. 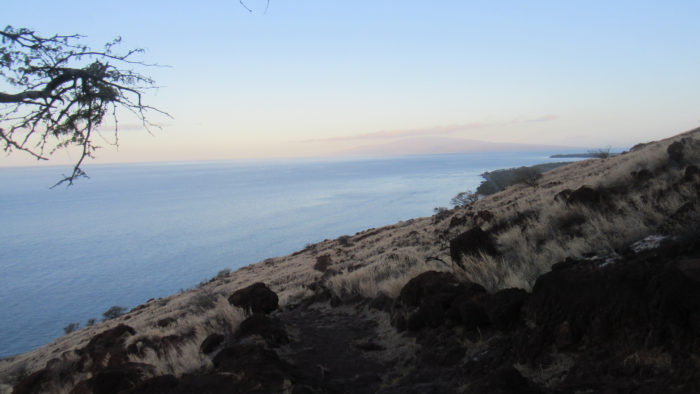 For hikers with a taste for history, a masochistic streak, and a sincere desire to sweat out a few liters and decimate some calories from all of that good living back at the resort, the rugged Lahaina Pali route offers a fantastic exercise in following the path of history. The presence of Maui’s windfarm above Manawainui Gulch offers a glimpse of a clean energy future, as well as some truly magnificent views across Maui’s central valley toward the towering summit of Haleakala. 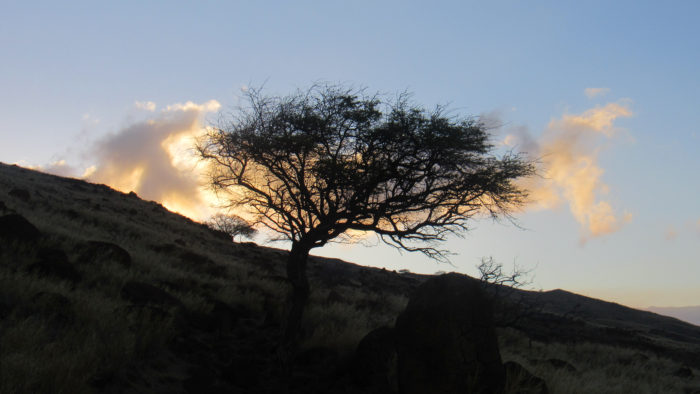 Technically, this is a one-way route that goes up and over the hills. Since the logistics of a one-way route are prohibitive for vacationers and fairly annoying for local residents, we are presenting this as a one-way route from near mile marker 10 on Honoapi’ilani Highway. We recommend coming up from this trailhead since much of the trail lies in shadow during the early morning hours, which affords a modicum of relief from the tropical heat. Conversely, the route up from Ma’alea is in the sunshine soon after sunrise. 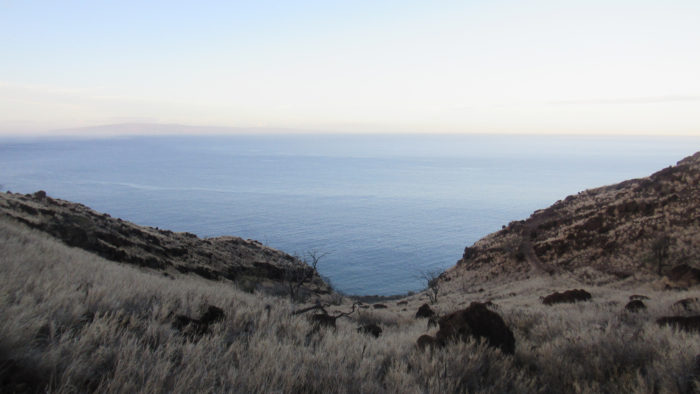 One major word of warning: do not underestimate the effects of relentless tropical sunshine on this route. The word Lahaina means “cruel sun,” and our resident star/life-source/bringer-of-sunburns displays the breadth of its sadism on this completely exposed route. Hikers should be wary about attempting this hike during the heat of the day. It routinely reaches 90 degrees, and the addition of high tropical humidity makes the heat that much more punishing. An early start is absolutely essential on this hike. 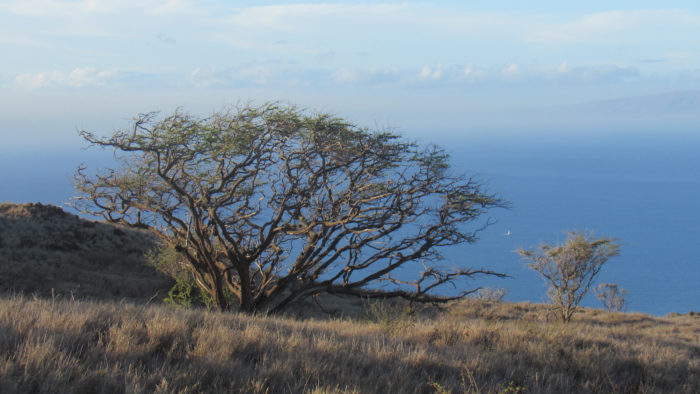 From the wooded trailhead (the only shade on the trail when the hills aren’t blocking the sun), head through the shade of kiawe trees past the interpretive panels outlining the route’s history. The path will take you to a brief stretch of the older alignment of Honoapi’ilani Highway. Turn right and follow to the signed Lahaina Pali Trail. 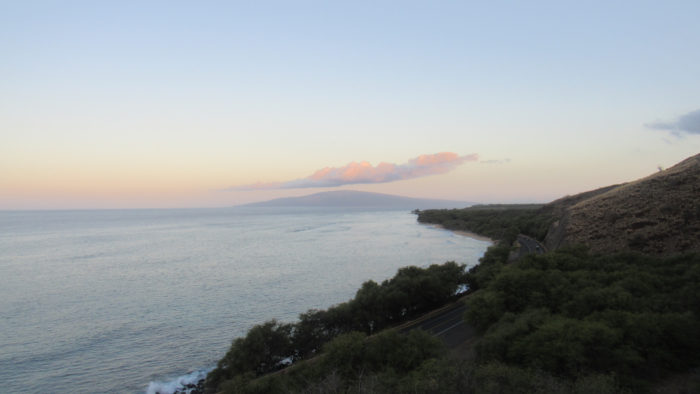 Turn left onto the Lahaina Pali Trail and commence a steep uphill climb. Over the first 1.5 miles, you’ll climb into and out of gulches, gaining approximately 1000 of the 1700 feet you’ll pick up on this hike. Occasionally, you’ll pass a few solitary sandalwood trees rising out of the carpet of white-yellow grass. The grass provides a splendid contrast to the deep red of the volcanic rock surrounding the trail. 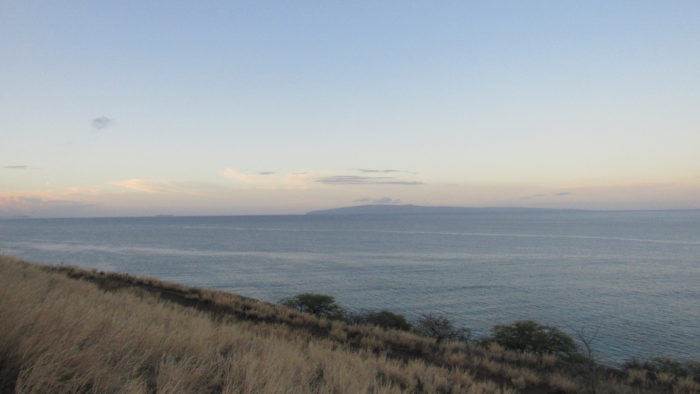 Be sure to stop and rest frequently (you’ll probably need to whether you want to or not) in order to enjoy the developing views of the islands of Kaho’olawe, Lanai, Molokini, and the looming hulk of Haleakala. Stop to consider for a moment that the ancient Mauians hiked this route regularly, and they did it barefoot. The ancient Mauians were some tough hombres y mujeres. 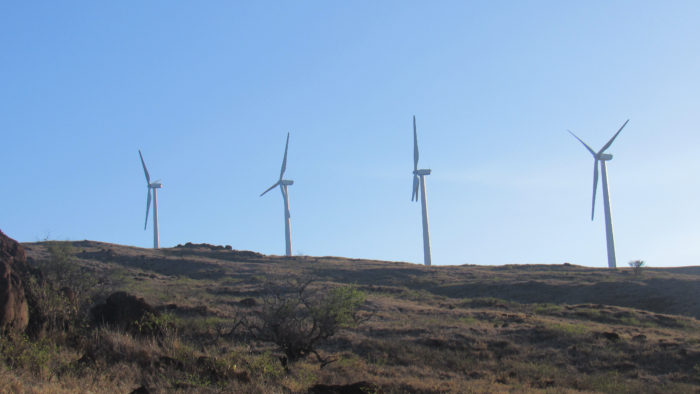 At 1.5 miles, the trail passes over a saddle and emerges at a relatively flat stretch. The wind turbines of the Kaheawa wind turbines come into view here. Your destination lies among the wind turbines, but before you get there, you have to traverse this grassy flat and then dip down into Manawanui Gulch. Although the sudden loss and subsequent gain of elevation may come as an unwelcome development, the gulch is cool and shady, offering a nice place for a rest and a snack. 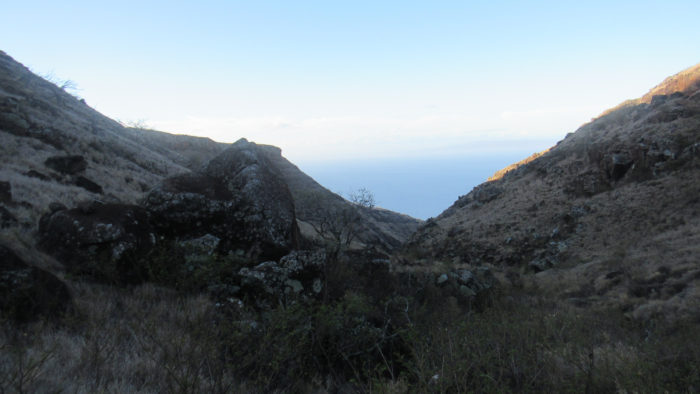 After you climb out of the gulch, you’ll have a mere .3 mile to go before you pass the wind turbines and cross over a gravel road to reach the high point of the trail. Interpretive panels offer some info on the wind farm, but the real star here is the view. The full expanse of Haleakala, itself a massive geological feature, dominates the view east. The flat strip of land connecting Haleakala to the West, Maui’s agricultural heartland, displays a patchwork of sugar cane fields. The posh resorts of Wailea sparkle in the distance. 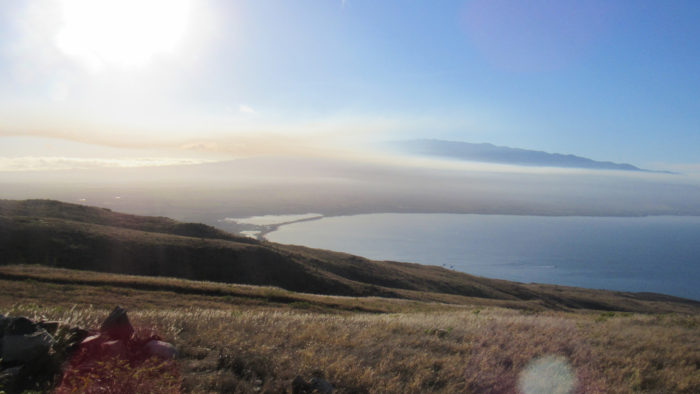 This is your return route unless you’ve managed to arrange a shuttle. Retrace your route, which is vastly easier going downhill. One word of caution: be really careful backing out of your parking spot when you’re done. I was not careful, and I ended up backing my rental car into a kiawe tree. 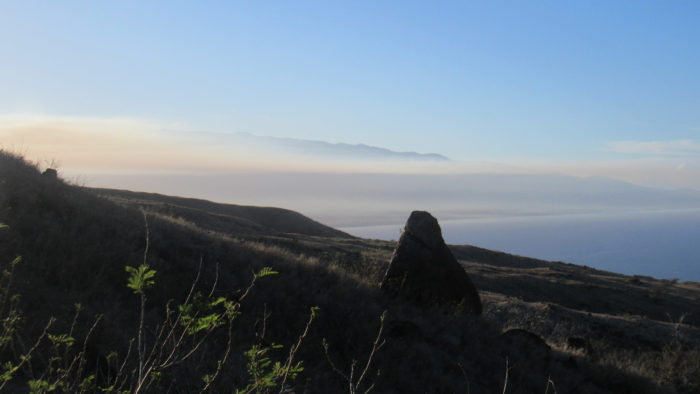 Note: I took the photos on a day when cane farmers set a sugarcane field on fire. This method of harvest burns away all of the excess vegetation, leaving the water-dense sugarcane for easy harvest. The incineration of the vegetation also puts some nutrients back into the soil. It’s an efficient method of harvest, but it did muck up my photos of Haleakala. 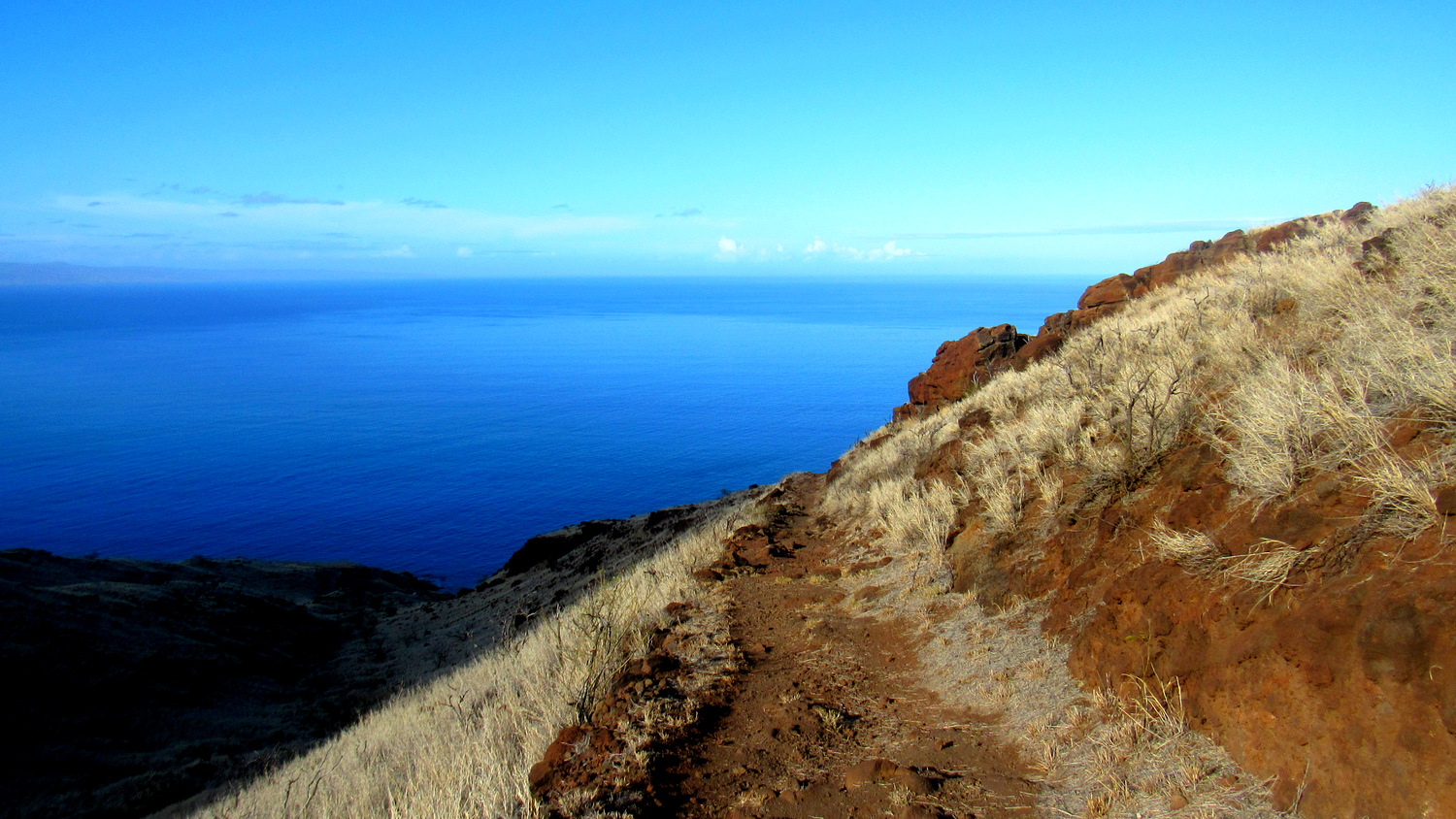 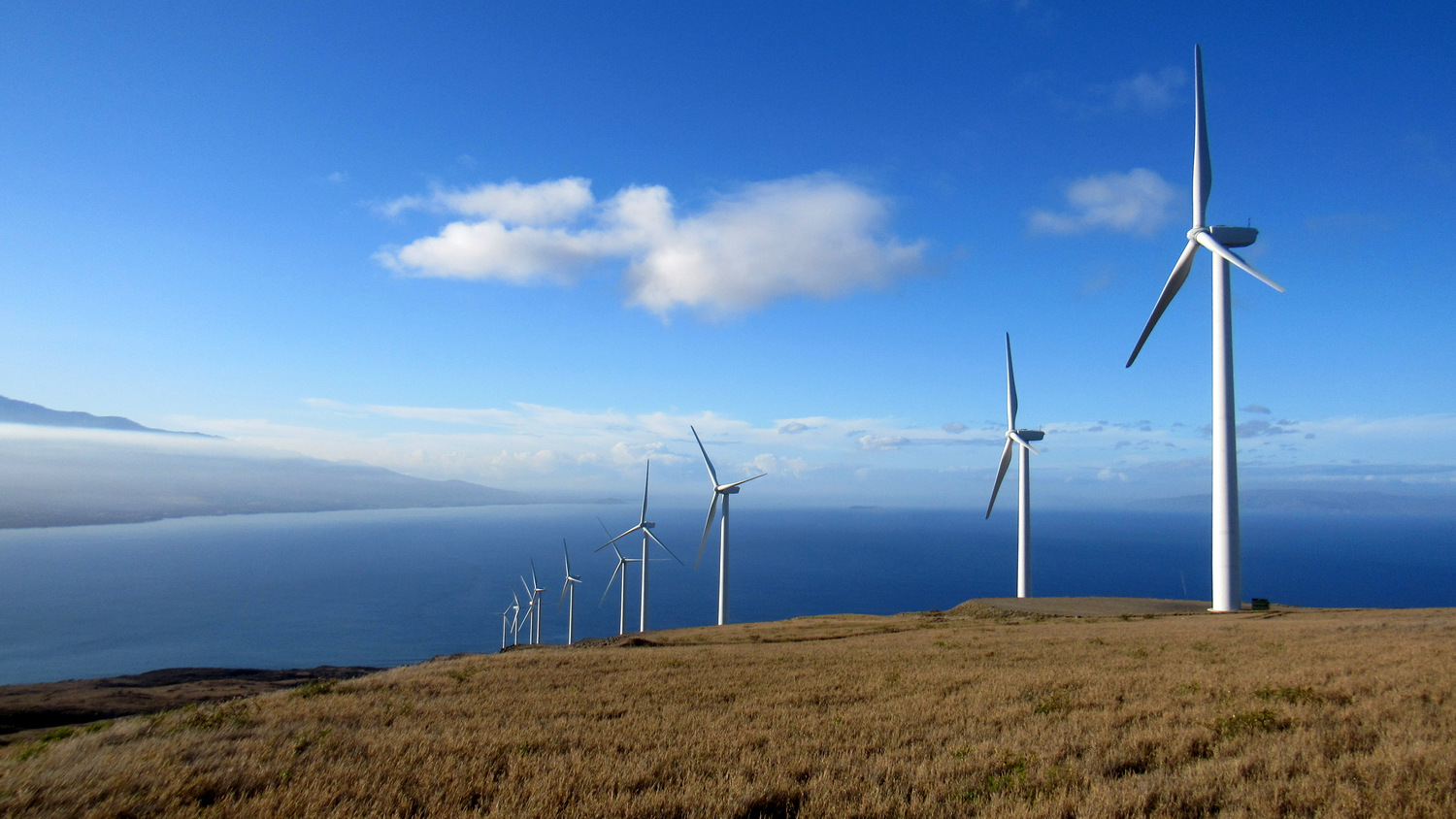 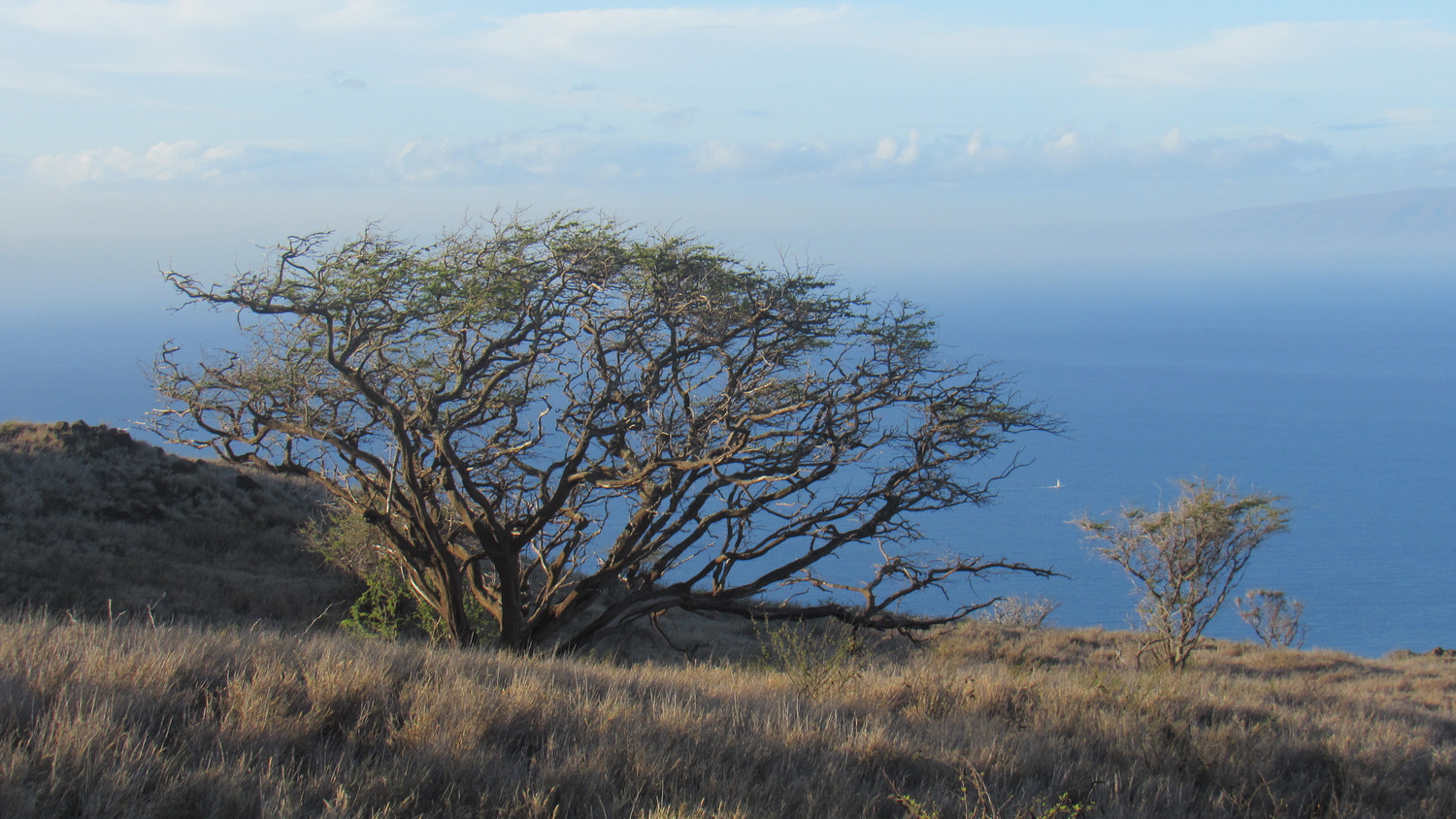 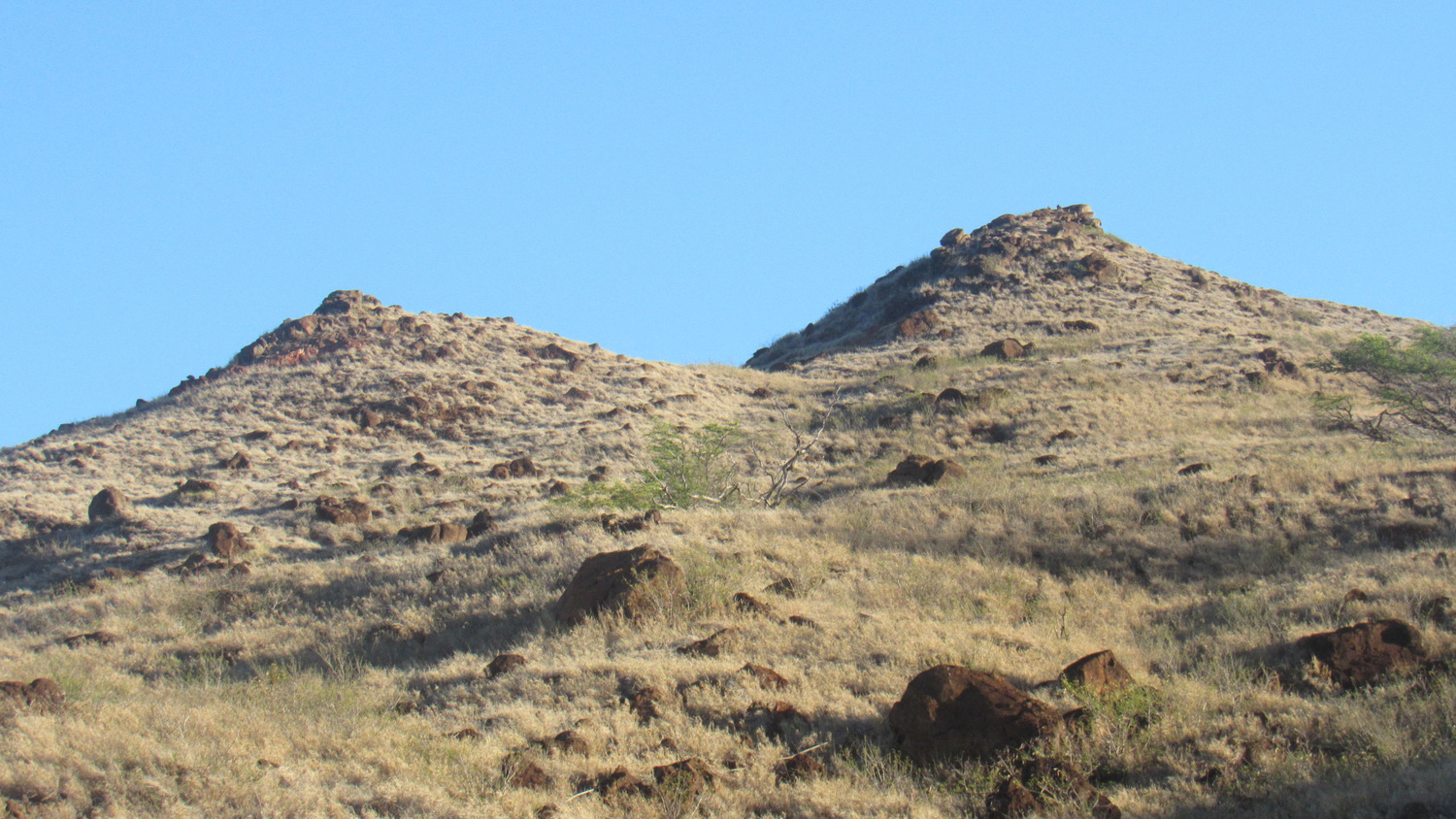 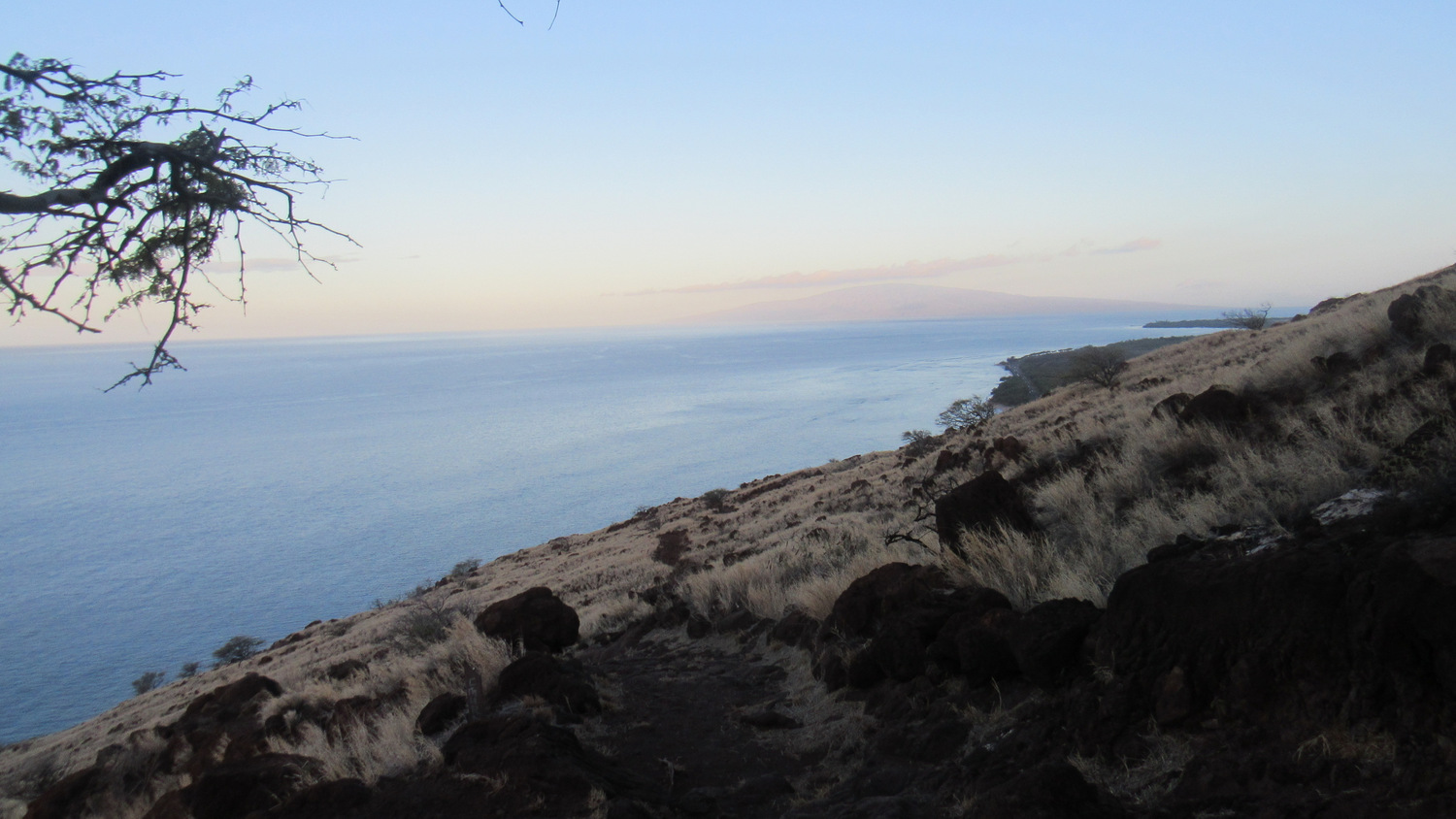 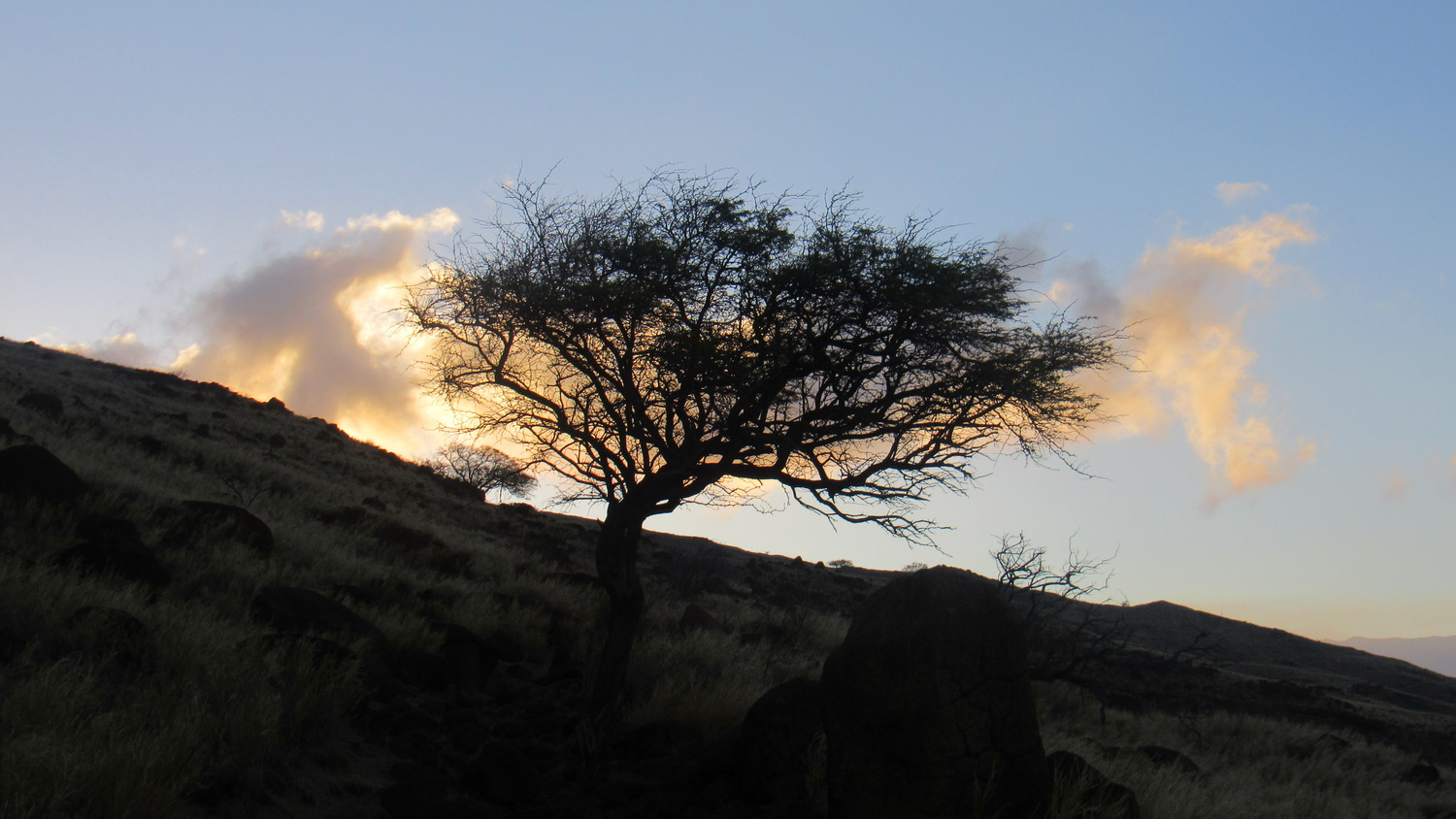 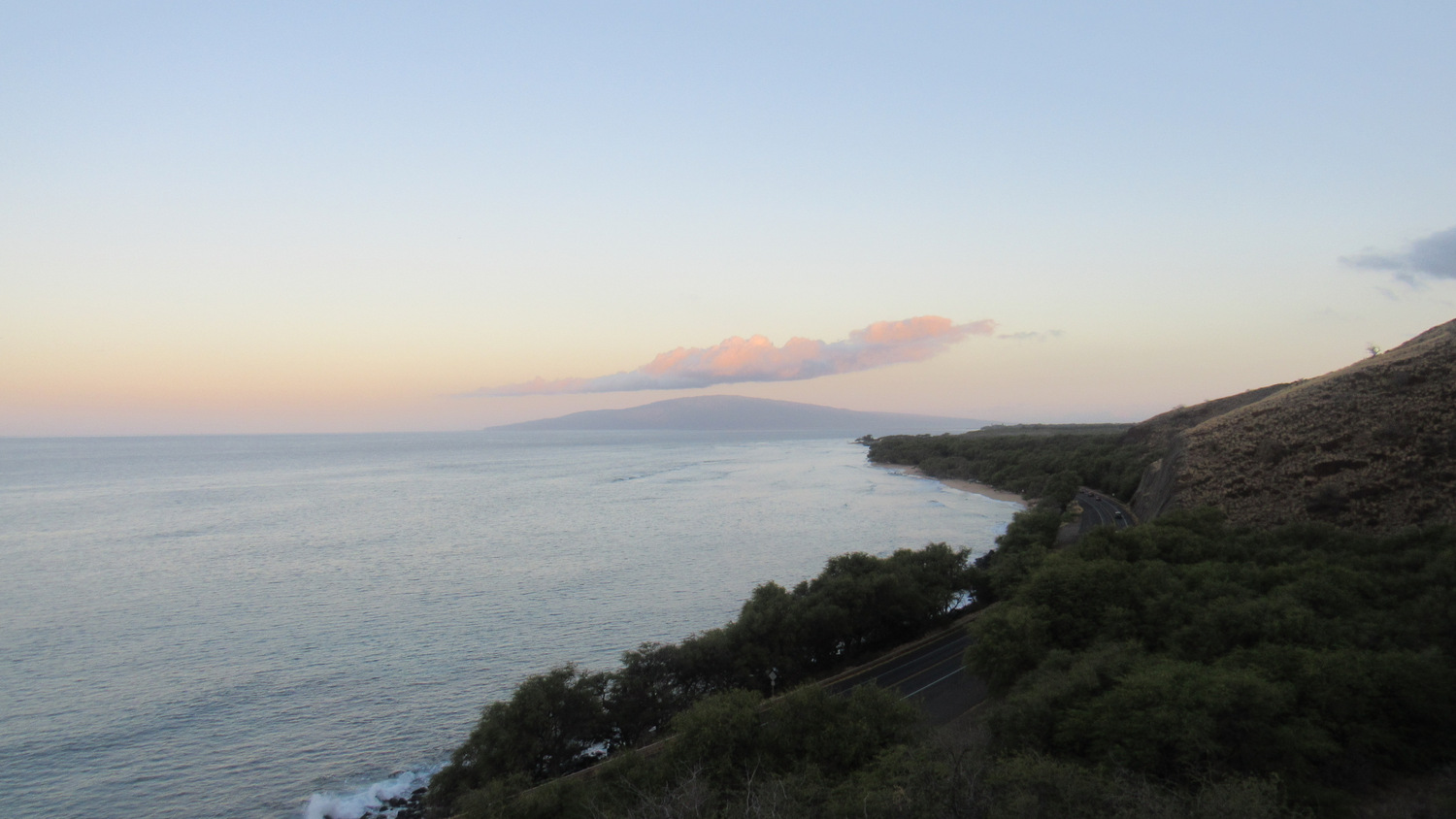 The trail is often pretty rough, especially on steep sections where erosion have exposed a lot of rocks. The trail also follows some very steep sections, making it a heck of a workout.

The nearest camping area is Camp Olawalu, about 4 miles north from the trailhead.

From Kahului, head south on Pu'unene Avenue for 1.1 mile to HI-380. Turn right onto HI-380, and continue south for 5.1 miles to a T-Junction with HI-30 (Honoapi'ilani Highway). Turn left onto HI-30, and continue toward Lahaina for another 6.1 miles. The trailhead lies just beyond the tunnel on the right side of the road beyond mile marker 10.