An intense 12 mile hike with over 3700 feet of elevation gain, this trail takes you through overgrown areas of the Ventana Wilderness up steep switchbacks to the ruins of a fire lookout tower abandoned in 1979. Along the way, you’ll hike through gorgeous California grassland and have unbelievable views of the wilderness … and get a KILLER workout along the way.

When I made the trek up north to tackle Junipero Serra Peak, I had some very good company – the team at Juniper Ridge had invited me up to join them on one of their retreats, where they planned to gather some of the plants used in their products, lounge in swimming holes, spin campfire yarns, and tackle the tallest peak in the Santa Lucias on a full-day hike.

So after some campfire whiskey and homebrew we decided the 6AM departure time for Junipero Serra Peak could probably be pushed back to 7 and we’d still miss most of the hottest sunshine on the ascent. We woke up to a gorgeous morning and hit the trail heading northeast through some incredibly picturesque grassland. 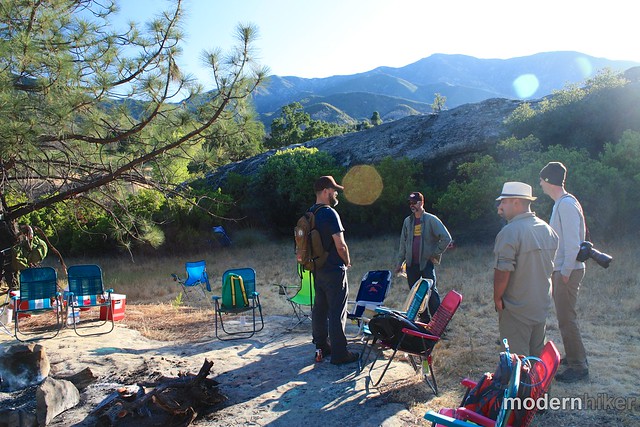 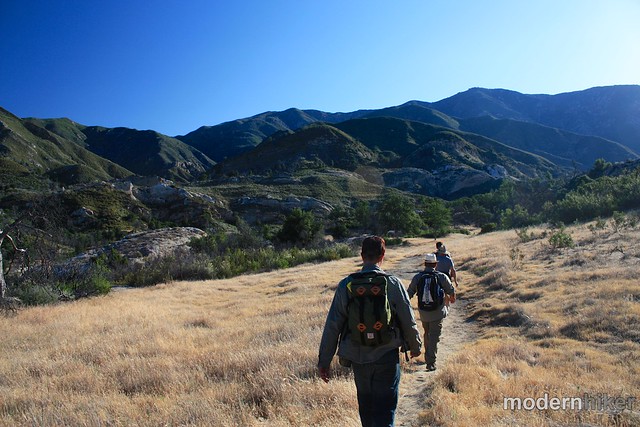 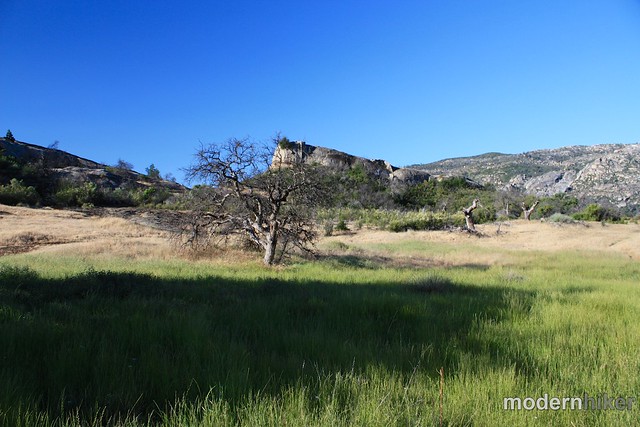 The first 1.27 miles of this hike are essentially flat – you’ll only gain about 200 feet in elevation. The trail here is pleasant and mostly easy, although there are a few spots where you may have to fight your way through a brush or two. The region was burned in 2008 and while the plants have made a very nice recovery since then, the trail is definitely in need of some love from trail crews. This is a minor inconvenience on the lower sections, but you’ll see the trail become significantly more overgrown as you continue further into the wilderness. 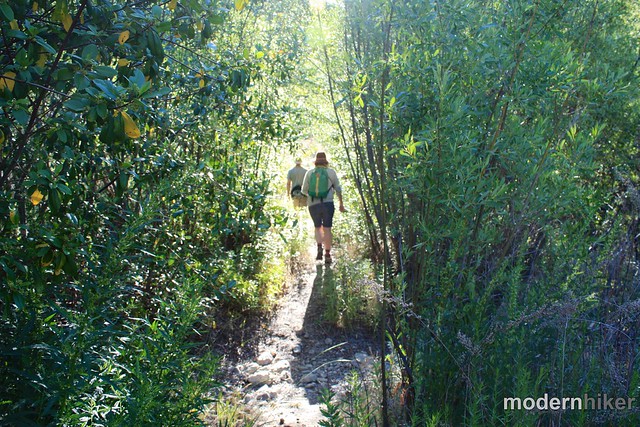 Juniper Ridge founder Hall Newbegin was the defacto leader of this hike, which meant we were often stopping to check out a little cluster of plants or blooms peeking up from behind some rocks. I’ll admit I have a very limited knowledge of trail flora – my hiking nerd knowledge tends to lean toward the region’s history and geography – but I am ALWAYS impressed when I’m hiking with someone who can point out things I would otherwise probably not notice.

Hall did a great job of pointing out the different ways the plants were recovering after the fire – explaining the difference between a low and high intensity blaze and how the early recolonizers will often eventually get pushed out once the larger plants regain their footholds. As you’d expect, he also made sure to point out every time we passed by something fragrant. Needless to say, this was definitely one of the best-smelling hikes I’ve ever done. 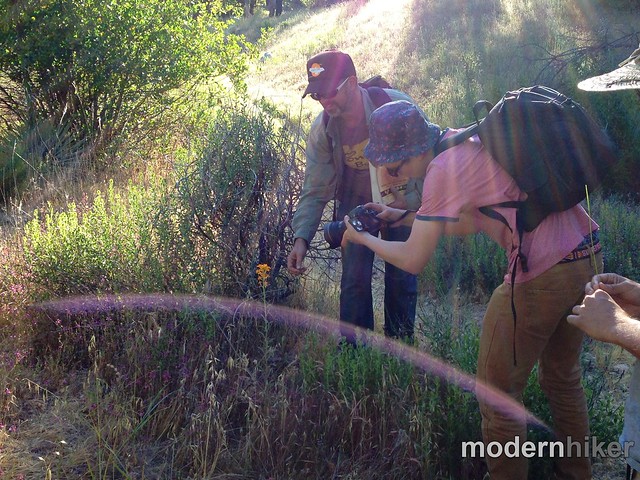 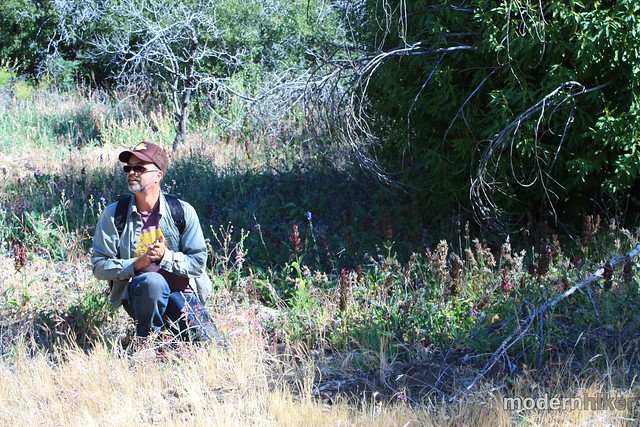 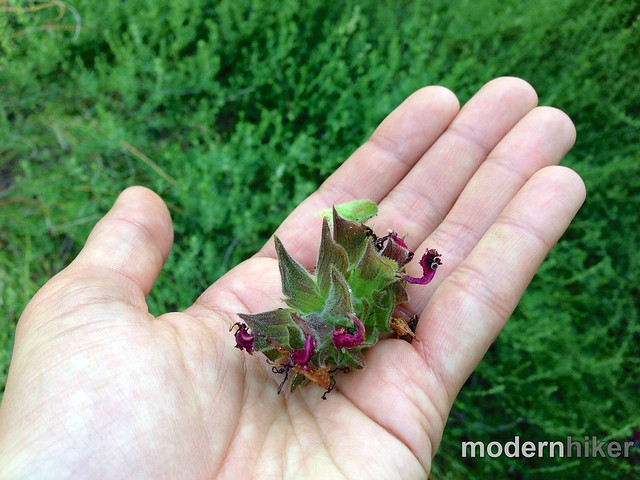 After that 1.7ish mile mark, it’s all uphill – and you don’t really get any breaks. For the first section, you’ll be hiking through increasingly thick grassland and hard chaparral. As the trail turns north, the canyon narrows a bit and you may find yourself hopping over some intermittent streams … which means you’re also hiking through some areas of thick poison oak (again, I strongly recommend long sleeves and pants for this one!) 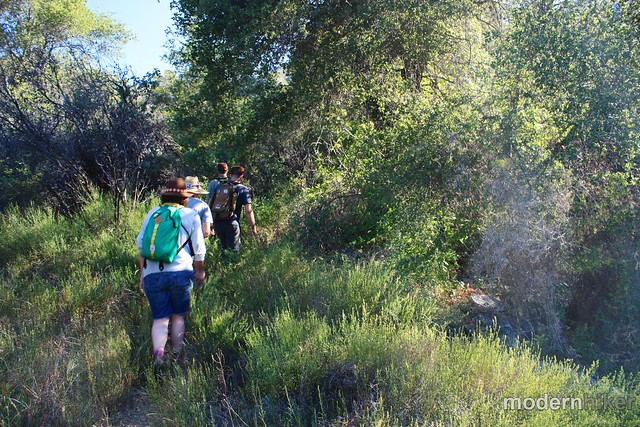 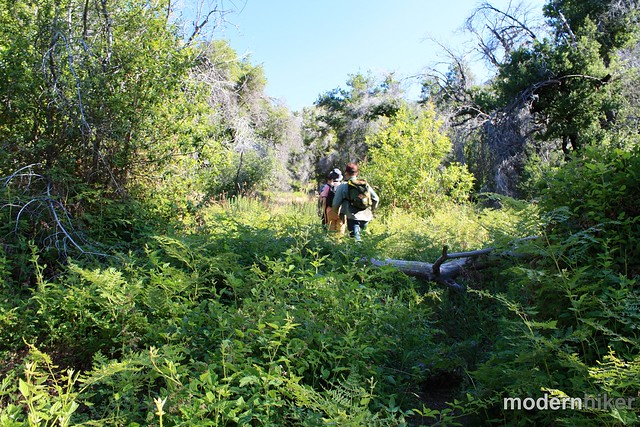 Eventually the trail gets away from the poison oak near the dry creeks and opens up to clear skies … which, on most days, means this is when the trail gets REALLY hot. 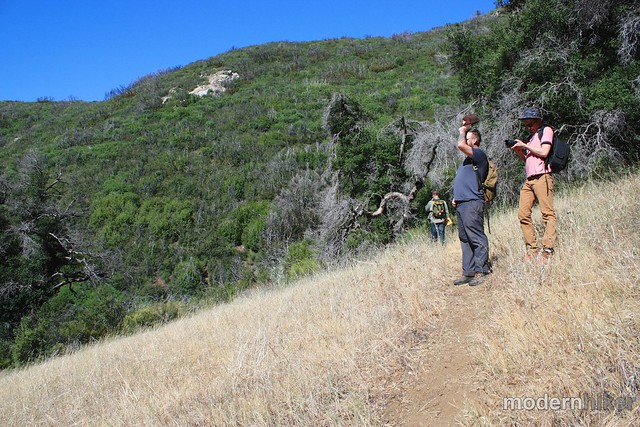 Unfortunately, the trail doesn’t get any easier. For the next 0.4 miles, you’ll gain 450 feet on steep, tight switchbacks. The ground here is loose and often covered with chaparral, which means your footing may be tenuous at best. I found this was more of an issue on the way down, but just keep your pace steady and you should be fine. Just be sure to soak in some of the scenery as you trudge along! 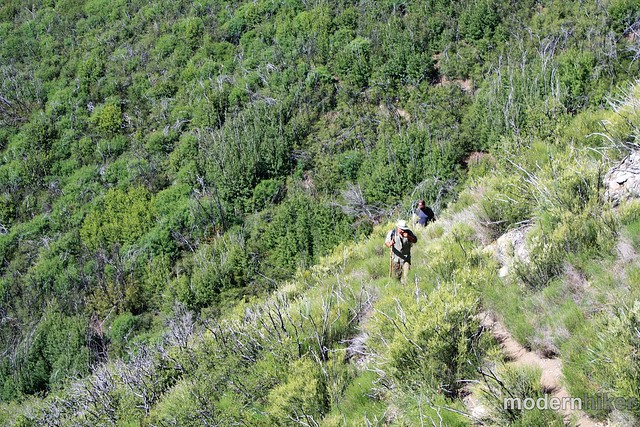 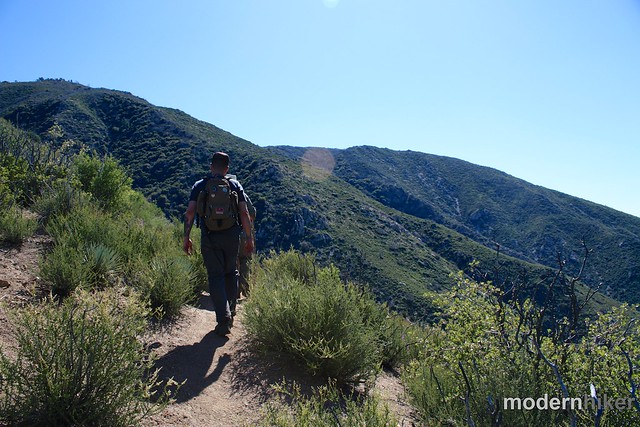 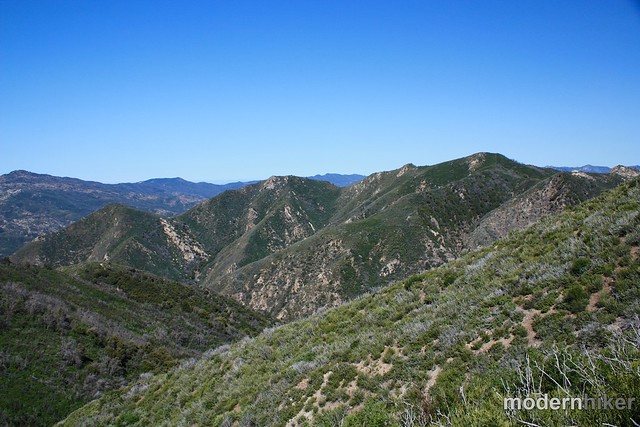 At the 3.4 mile mark, the trail reaches what looks like a firebreak along the ridge heading east – this is actually the continuation of the trail. Head east and get ready for … wait for it … more switchbacks up a steep, shadeless ridge!

Continue trudging through tough patches of regrowing manzanita – and keep your eyes peeled on the prominent peak to the northeast. If you look closely you’ll be able to see the ruins of the abandoned fire tower still standing – and that’s your destination! (just don’t get too excited – you’re only a little more than halfway there) 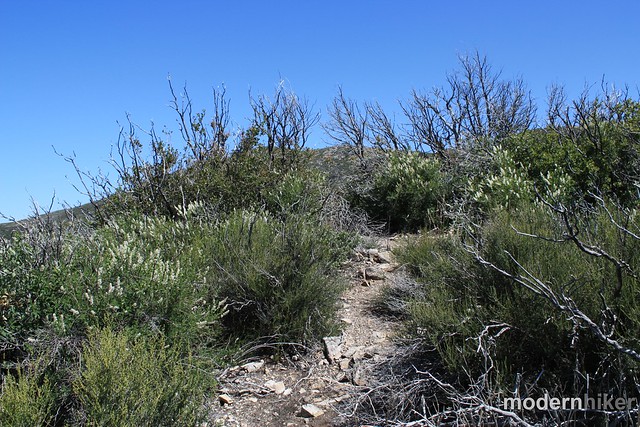 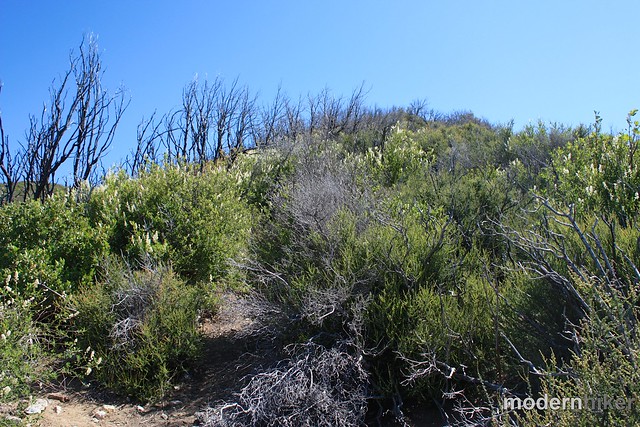 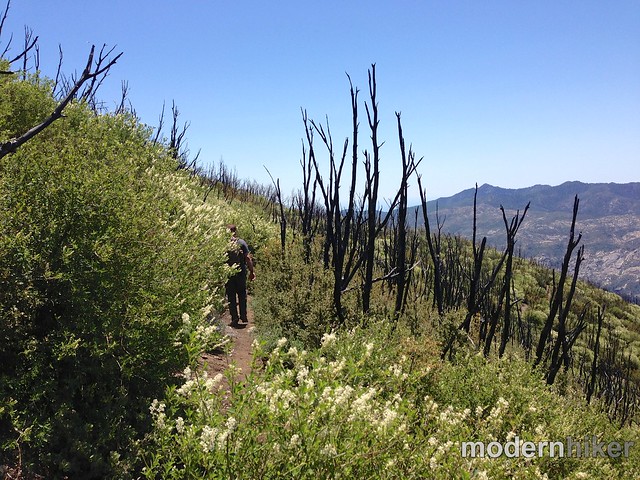 The inclines continue until around the 5 mile mark, when the trail reaches the north side of Junipero Serra Peak. Here, the chaparral gives way to larger pines and – mercifully – a little bit of shade. 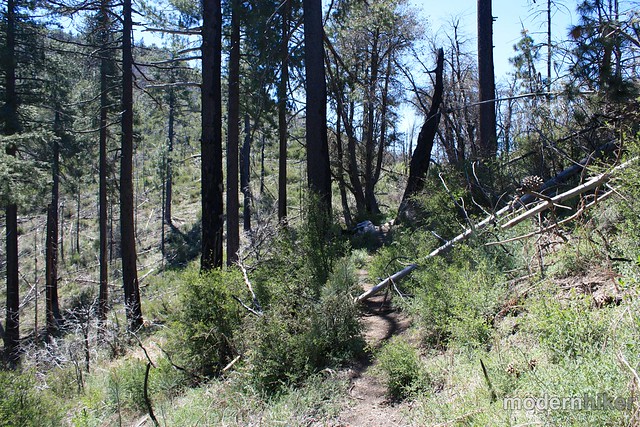 As you near the summit, you’ll be able to see the tower much more clearly – and the trail itself ends just in front of the tower at a spot with a small bench and nice shade that’s perfect for that mid-hike lunch.

You can climb up the staircase to the tower if you’d like – but there isn’t anywhere to stand once you get up to the top. You will, obviously, get some pretty amazing views, though. Here are some photos of the lookout tower from slightly better days. 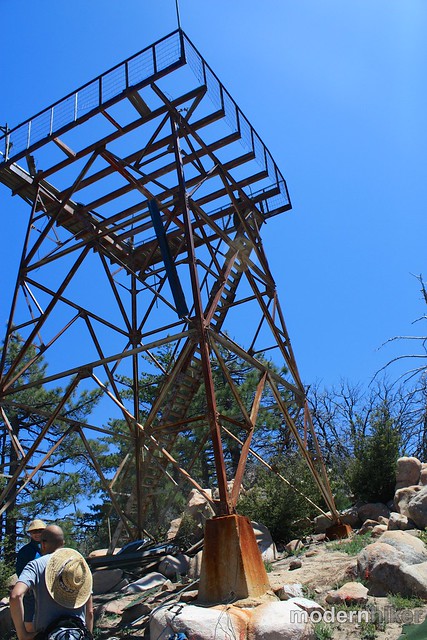 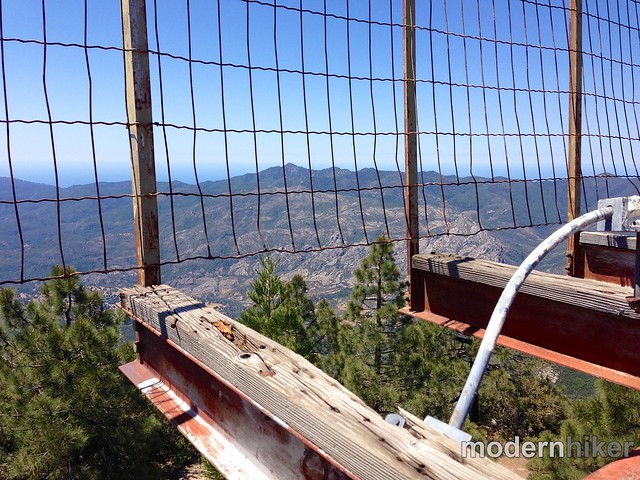 If you’re interested in chasing down USGS markers, there’s a small rocky formation just to the south of the tower with the marker imbedded in one of the stones. Here, the peak is labeled Santa Lucia West 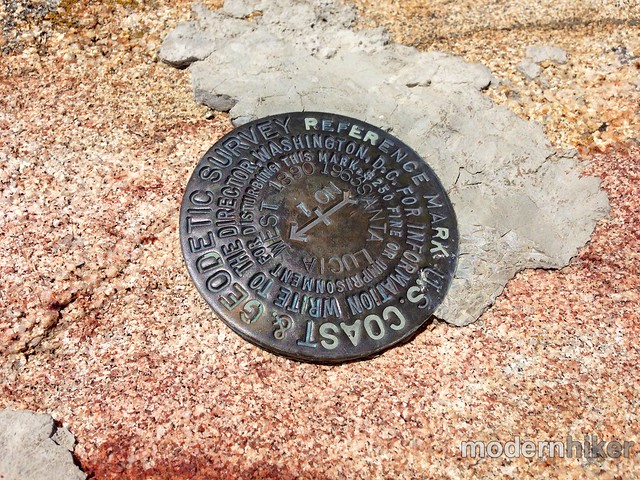 Interestingly, neither the fire lookout tower nor the USGS marker is the actual summit of the peak. According to topo maps, the highest point on the peak is actually on the southeastern side of the summit plateau. There’s an easy route just south of the fire tower that you can take to the southern promontory. Then just head east through some low manzanita to a larger group of rocks. I couldn’t track down a summit marker here, but my GPS reading was the highest. 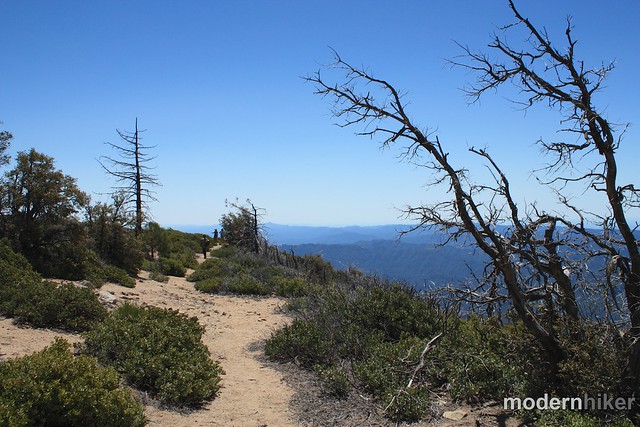 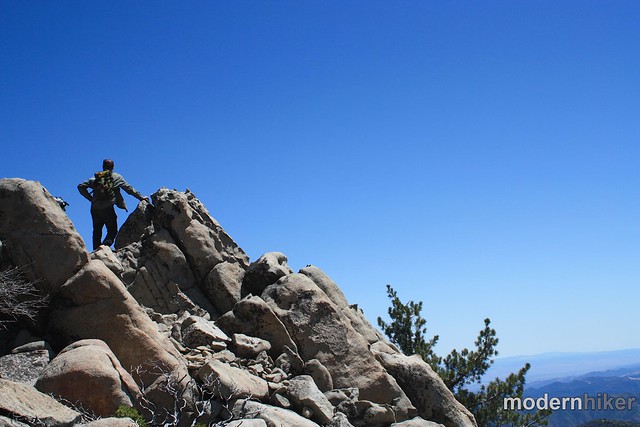 When you’re done soaking in the incredible views, return back the way you came.

I will note here that the descent from this peak took significantly longer than most descents. Due to the loose rock on the trail and the fact that most of the trail is overgrown, I found I was taking much shorter strides than I usually take on descents. While there aren’t really any spots with dangerous drop-offs here, it can be easy to slip and fall if you’re going too fast … so take your time … and don’t forget to check for ticks!

Special thanks to Obi Kaufmann and the rest of the team at Juniper Ridge for the invite. 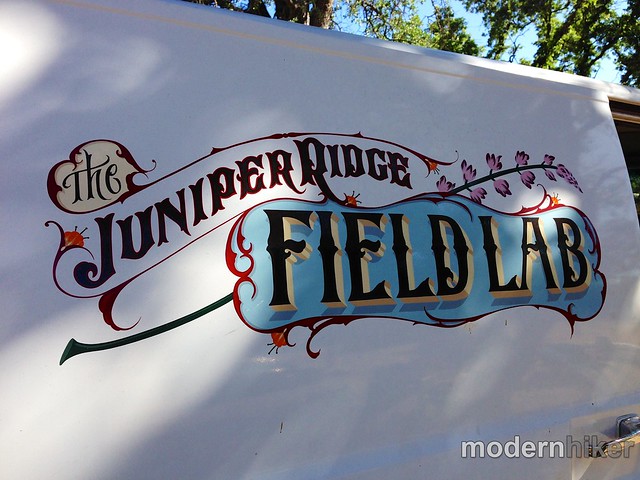 Note: There are two sections of the road in and past the army base that cross rivers on a paved surface without a bridge. These crossings may be restricted if the water flow is too high.

Tough. This route has a killer ascent and steep switchbacks up areas of loose soil. If it weren't tough enough, most of the trail is overgrown, too. There are only a few spots where you'll actually need to bushwhack, but I recommend you wear long sleeves and pants on this one if you're bothered by chaparral scratches.

The Santa Lucia Memorial Campground is the closest to the trailhead. It's first-come, first-served.

From the 101, take the Jolon Road exit toward Fort Hunter Liggett. There's no gas beyond this point, so fill up at Paso Robles or King City. Jolon Road continues west until it intersects with Mission Road. Continue west on Mission, heading into the Army Base. Certain roads may be restricted and all people in the car may have to show ID. Continue west on Del Venturi, which becomes Indian Road at the Forest boundary. Trailhead is 5 miles farther on the road.

What about that trail now is it still do able . I see all this comments are from 2013 but what about now 2019?

Perhaps you started at a different trail or the route has changed a bit since I hiked it last? My GPX file reads 11.7 here, on Garmin Basecamp, and CalTopo.

Hiked the Junipero Serra Peak trail yesterday April 9th 2018, challenging ascent, overgrown Trail at the higher elevation lot of ticks but it was rewarding. I don't know where they got the 12 miles from I had 14.7 on my Fitbit which is calibrated.

Nice! Thanks for the update, Gwen.

The MP station at Fort Hunter Liggett is no longer at the main entrance to the military base. You can bypass the MP post completely and carry on to the road to the Indians campground to find the trails now.

That sounds about right for the central coast. We routinely get 50-degree temperature swings down here in Paso. It hasn't snowed here yet, but it's gotten cold enough. Any idea what happened to the lookout? I thought it might have burned in the 2008 fire, but it looks like the cabin was gone by 2001.

Yeah, that place gets some pretty extreme weather - the Juniper Ridge guys were saying it was nearly 100 degrees on the peak a few weeks before we did it, but that it also got a bit of snow just after that!

I did this as a winter hike back in the '90s. It was a wet winter, and we had to post-hole through knee-deep snow for about the last mile to the summit. Not what I was expecting in Big Sur... The lookout was still in one piece though, with a full cabin and glass windows.

Looks like a great hike, we are planning a trip to the states early next year and might put this one on our to do list. Handy directions to by the way

Nice, thanks for taking a look at the trail, nice to know what your getting into before you head outdoors!