It’s no secret that Canyonlands National Park straddles some truly stunning territory. There are also no shortage of places to get stunning views of the canyons cut by the Colorado and Green Rivers – in many places you can just pull your car over at the side of the road and see something that’s going to probably stay with you for the rest of your life. But, as is often the case, with just a little more effort you can get significantly more reward.

Such is the case with the popular Grand View Point Trail in Canyonlands, considered by many to be the best view in the entire Island in the Sky District. This short route at the end of Grand View Point Road starts out as a very easy, wheelchair-accessible path to an overlook, then climbs down some moderate but rugged rock stairs, taking you right to the edge of the southernmost part of the Island in the Sky.

The trail begins at a parking area at the very end of Grand Point View Drive. The first 300 feet are fully paved and accessible. 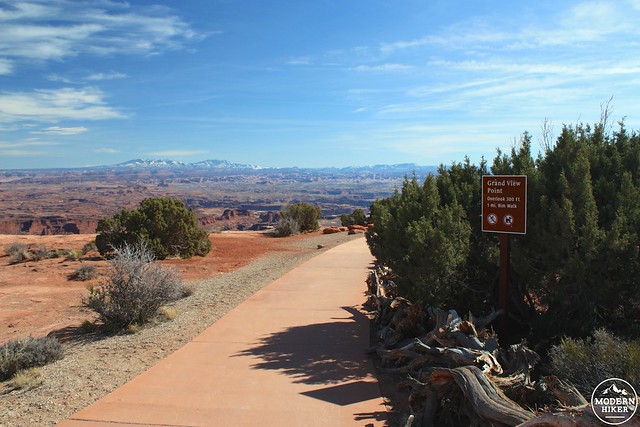 From this viewpoint, you’ll be able to see almost directly into the region known as Monument Basin. Formerly named “Standing Rock Basin” for obvious reasons, the region features towering spires. The tallest spire – the Totem Pole – is 305 feet tall and is a completely freestanding rock formation (visible, far left on second photo below). 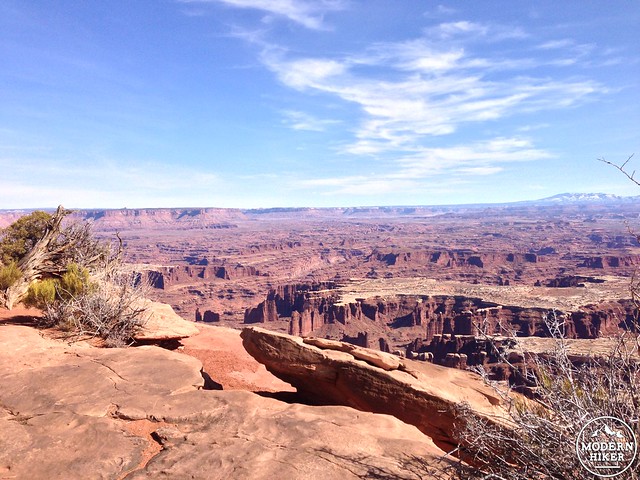 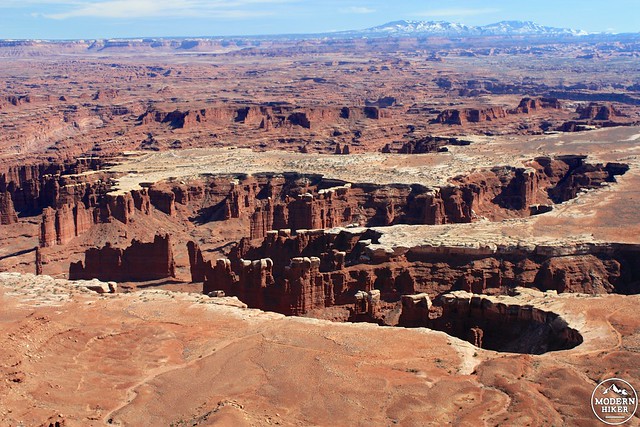 Just beyond this paved platform, the trail makes a quick descent down a beautiful stone staircase. Here, it leaves the paved surface behind for the tough sandstone of the mesa instead. 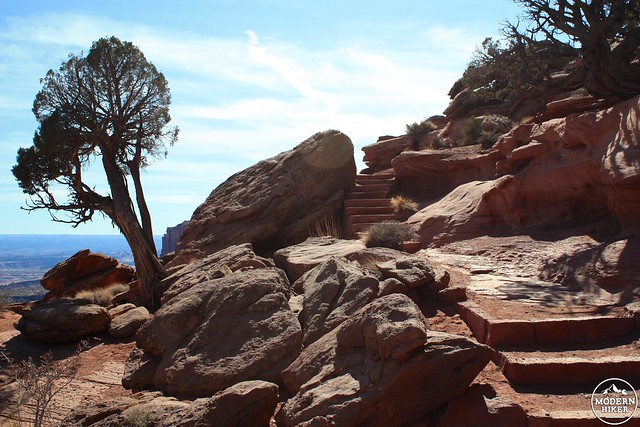 The trail here is a mix of dirt single track and cairn-marked slickrock trail. It’s slightly more thrilling than your standard “quick hike to a viewpoint” just because you can hike right out to the edge of the canyon if you’d like – but if you’re a little spooked by that prospect you can just as easily stay further inland. 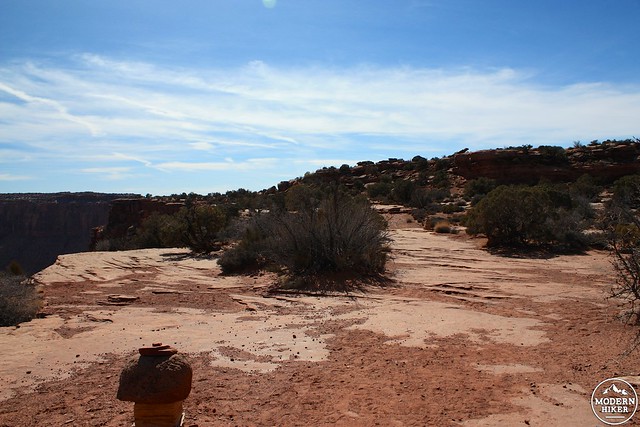 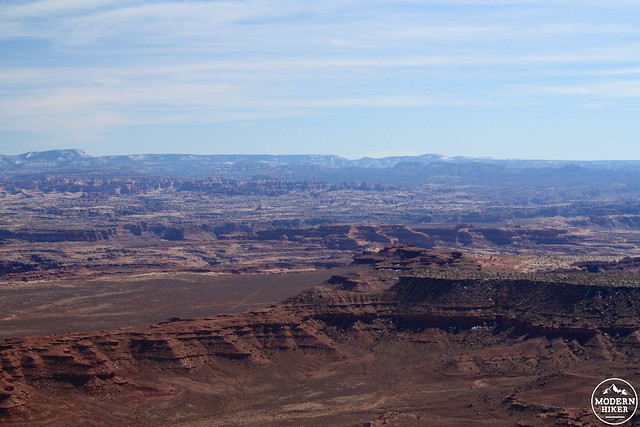 The Needles District, visible in the distance

This trail is only about a mile long, and for virtually the entire hike you’ll be surrounded by million dollar views. You may have to keep reminding yourself to at least occasionally stop gawking at the scenery to remember to watch where you’re walking. You should note that the trail itself is very well designed and a work of beauty itself … although somewhat more subtle than the rest of the environment. 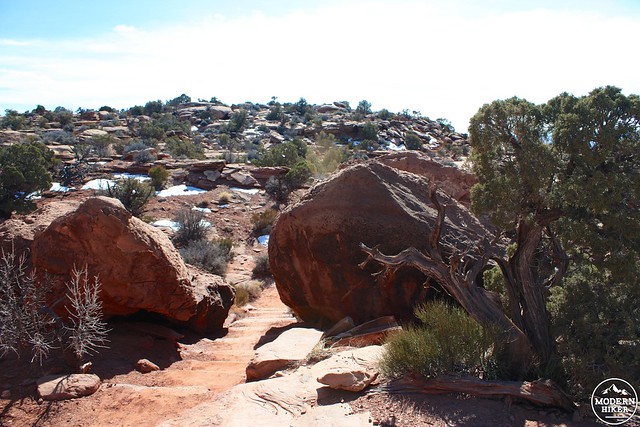 The trail stops when the ground does – rewarding you with some amazing panoramic views of the White Rim and vast Canyonlands around you. If you’d like, you can scramble up a nearby boulder pile to get an even better view.

Unfortunately, the Rivers are not visible from this angle in the park – one reason why many people consider nearby Dead Horse Point State Park to have the better Canyonland views – but if you can reach these views and not still be moved, you might want to check your pulse. 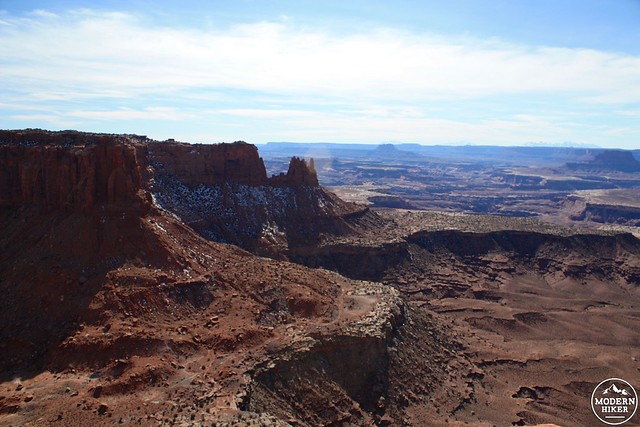 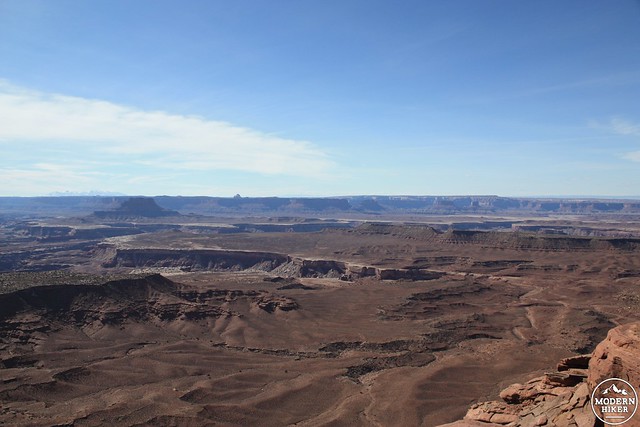 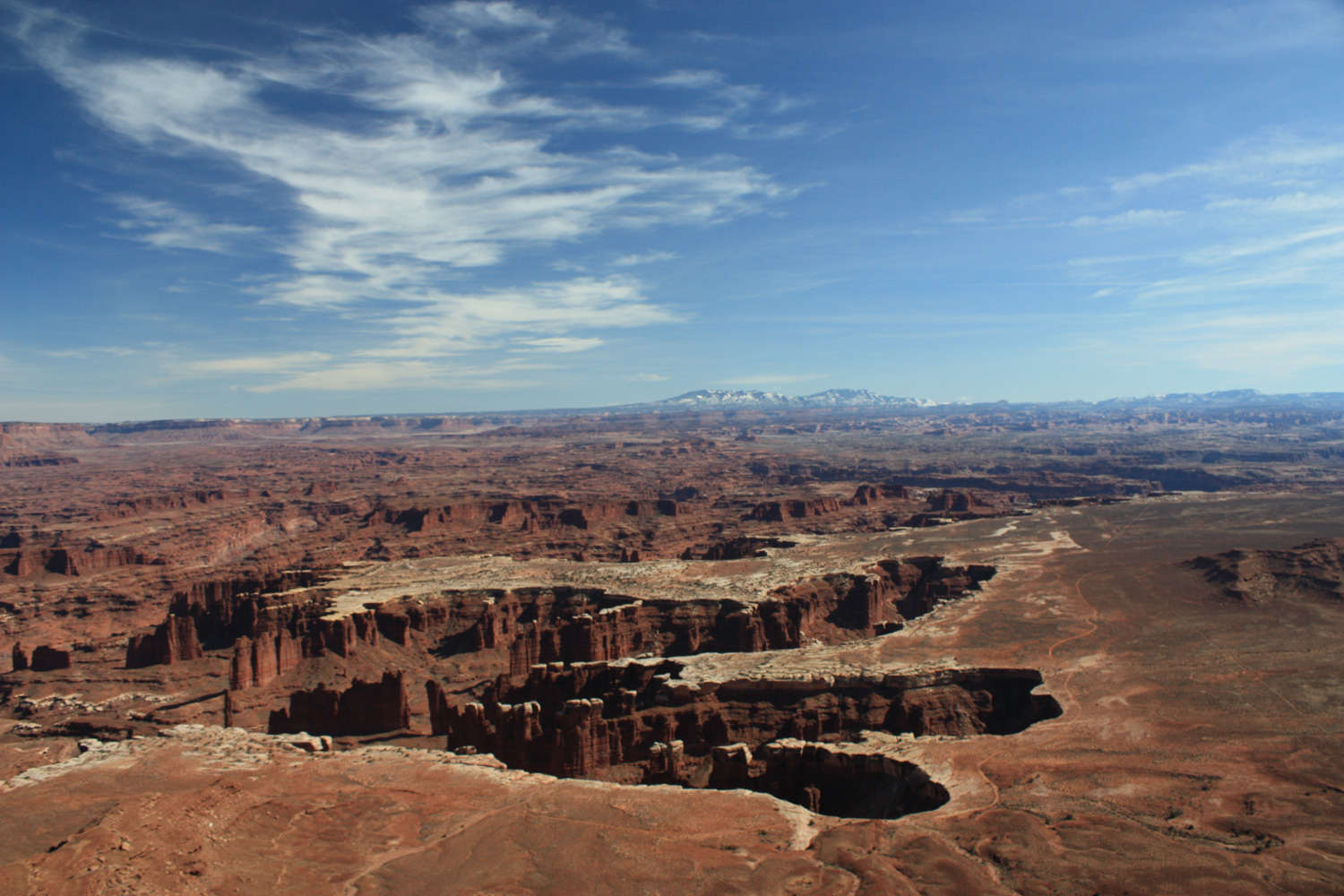 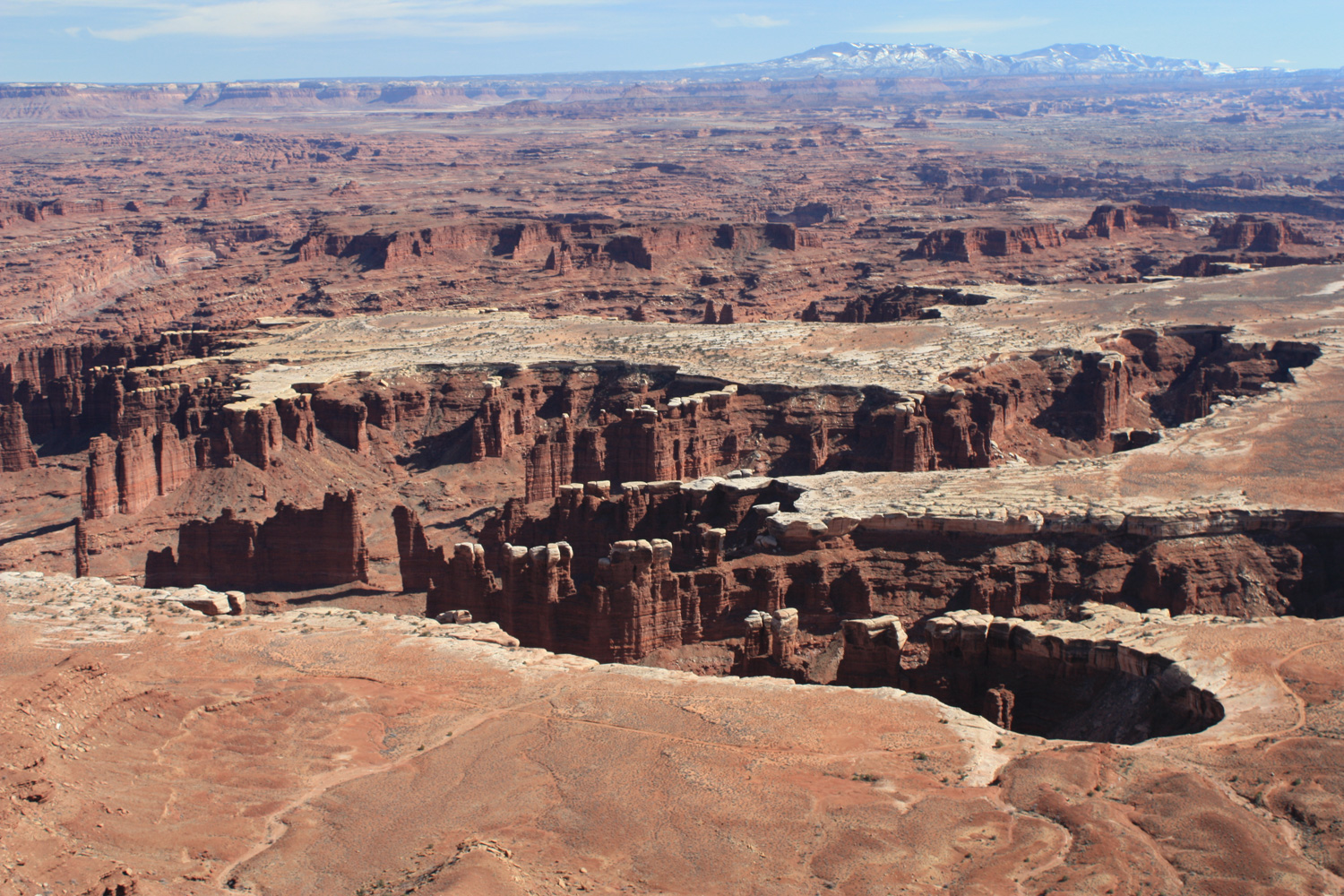 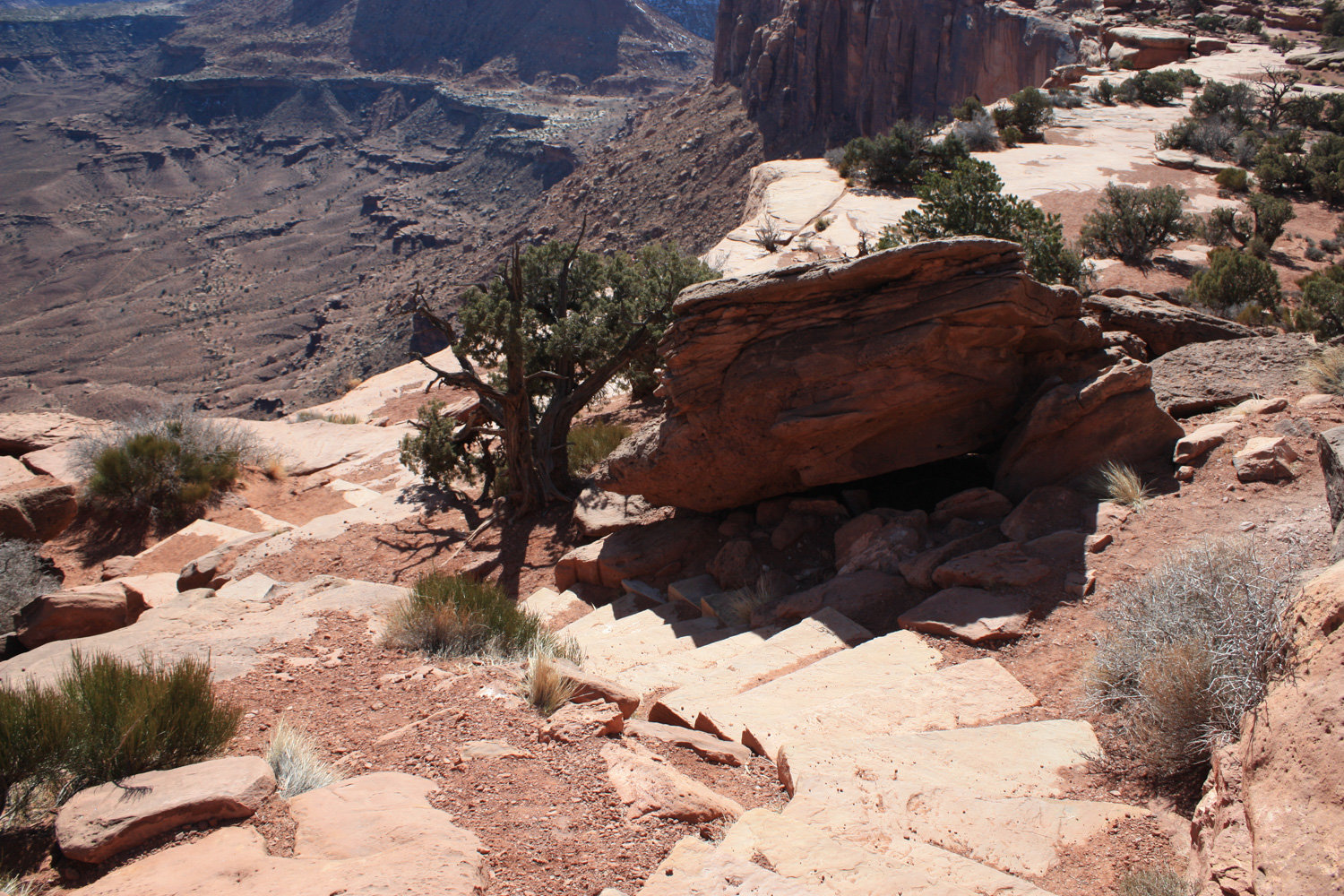 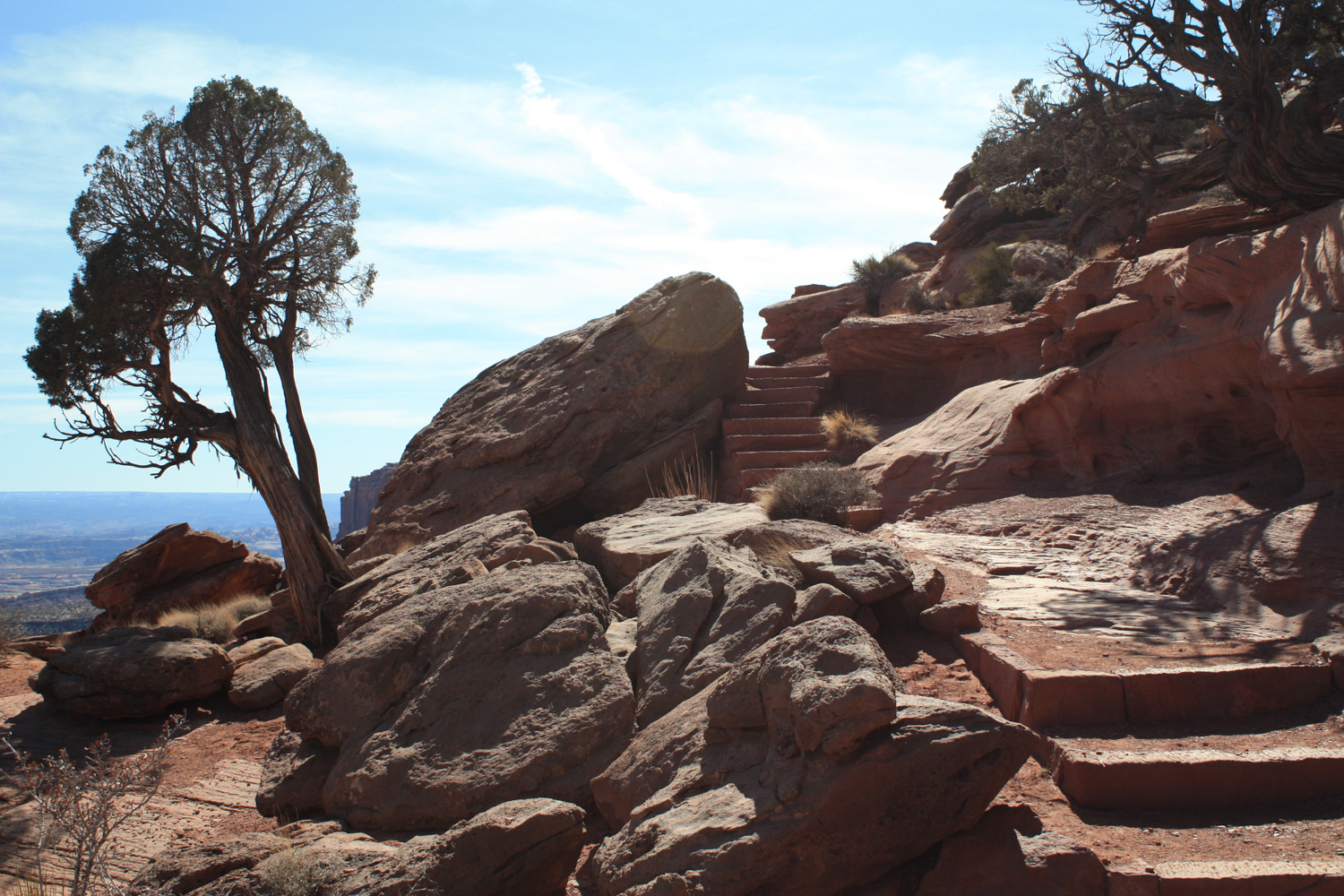 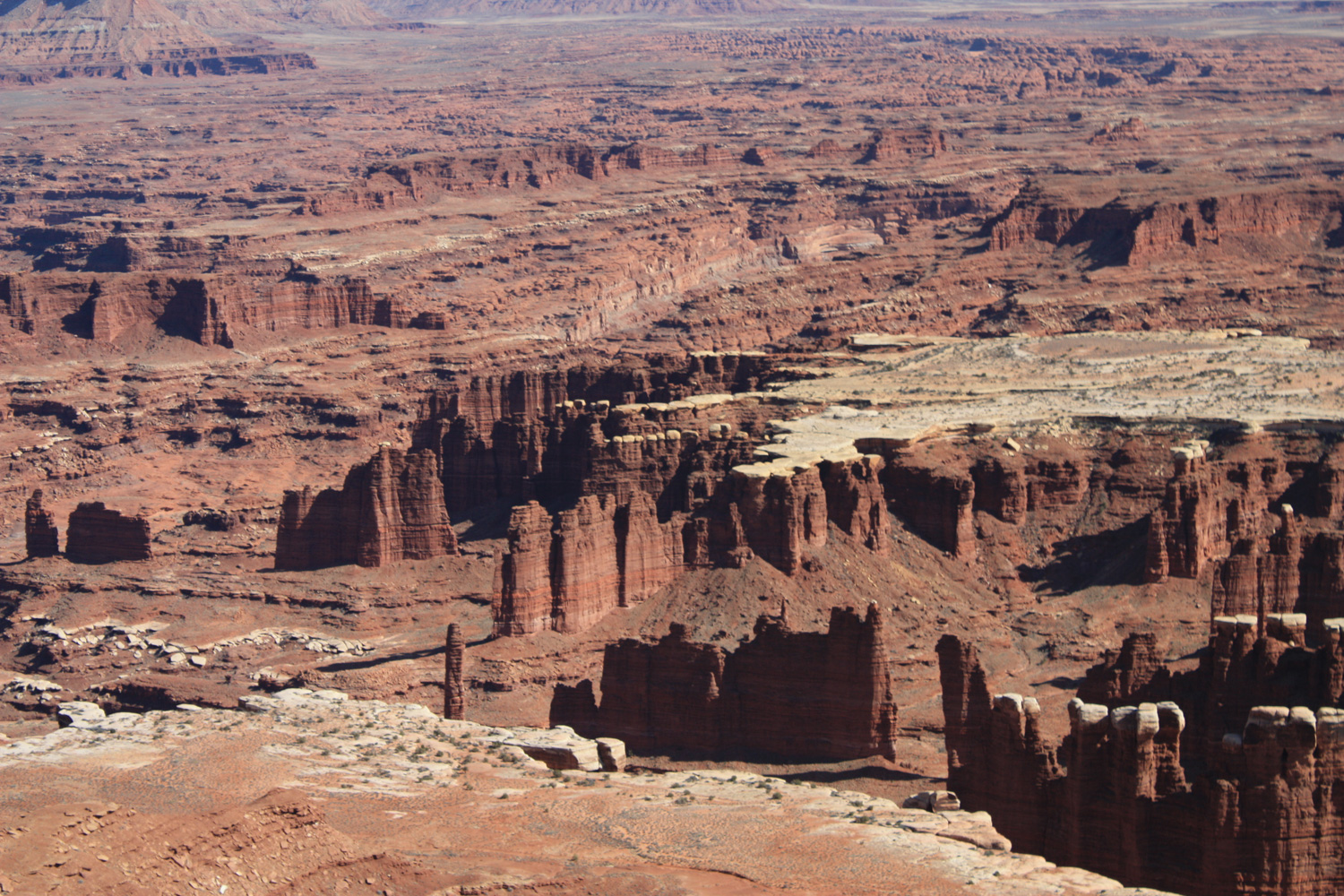 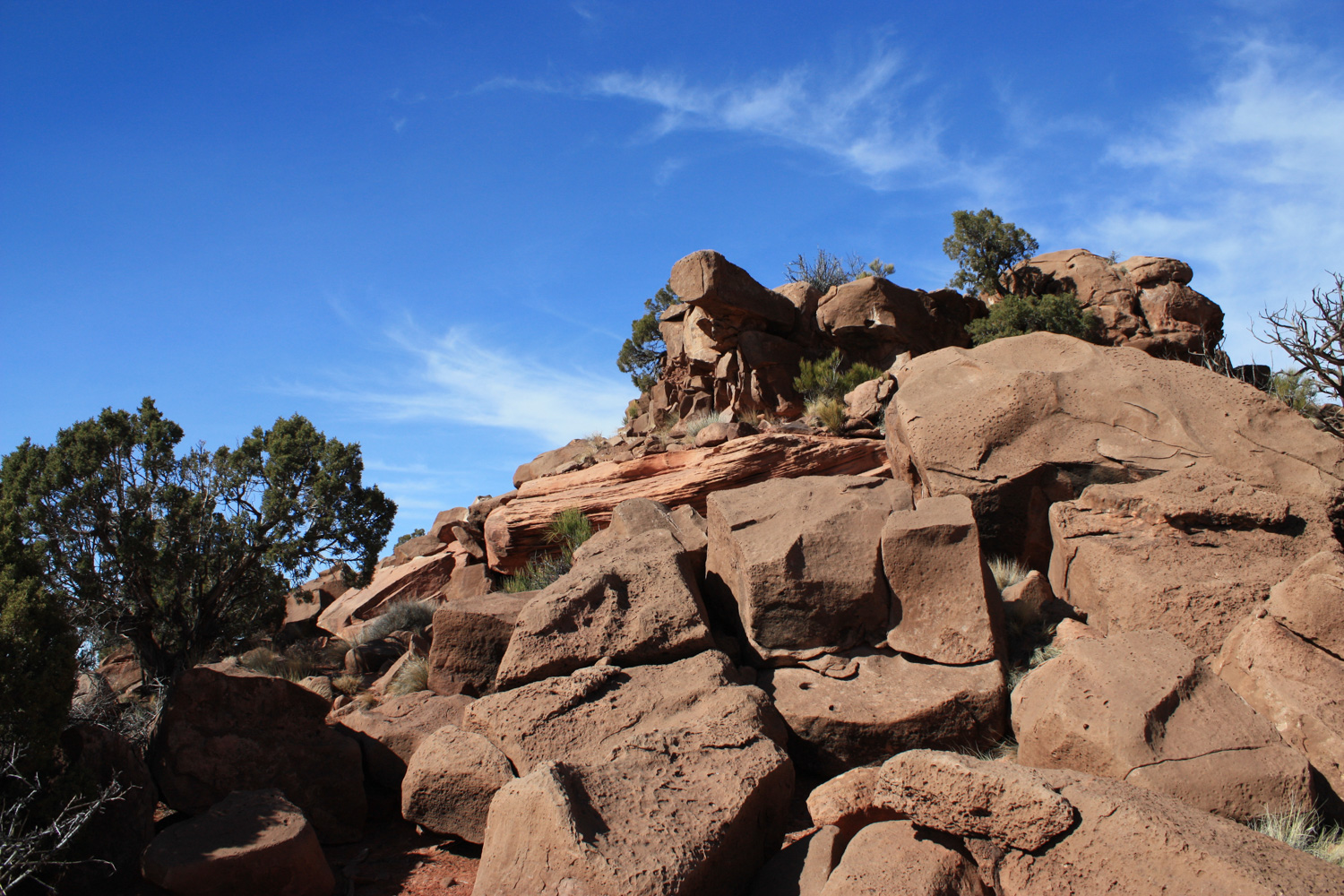 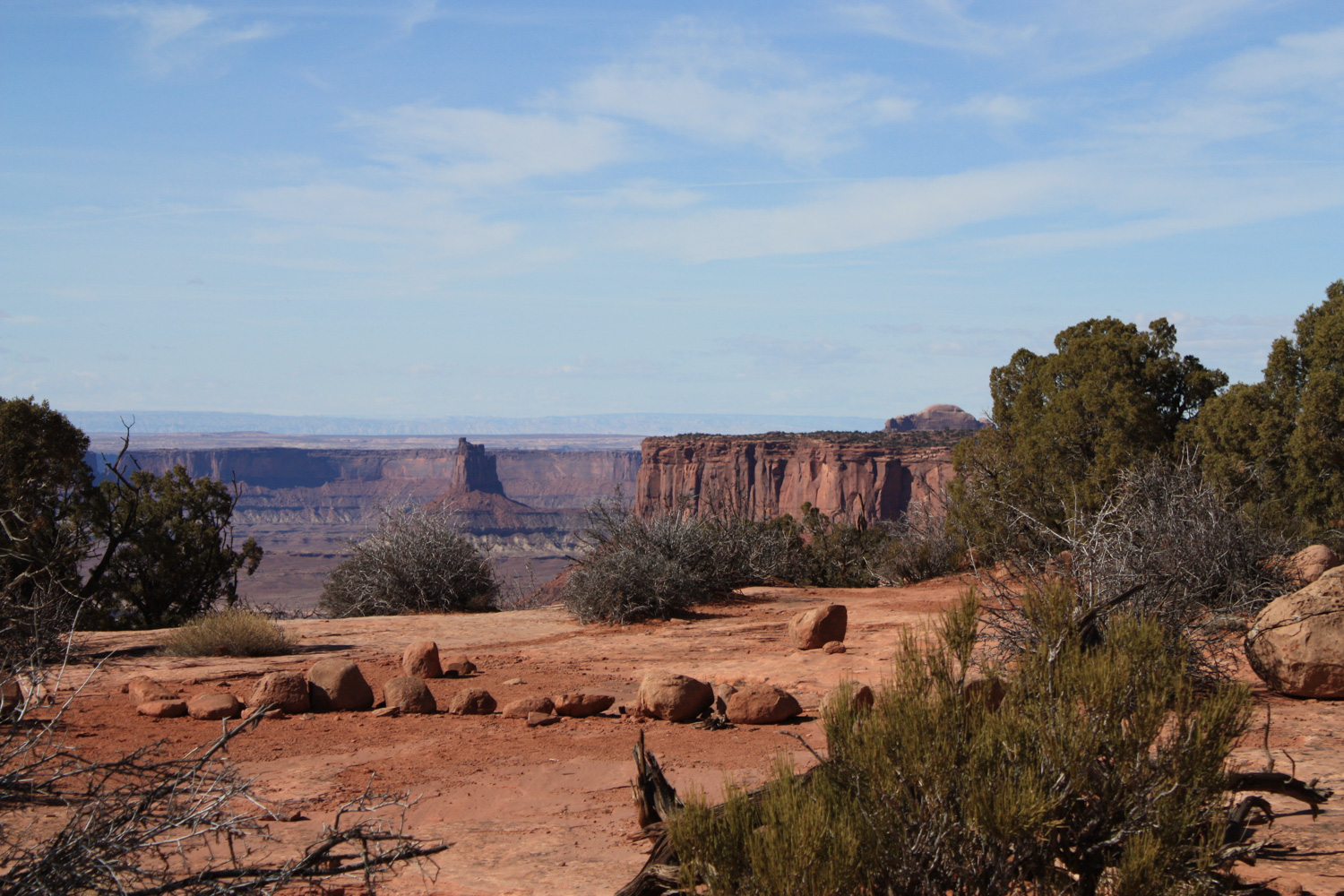 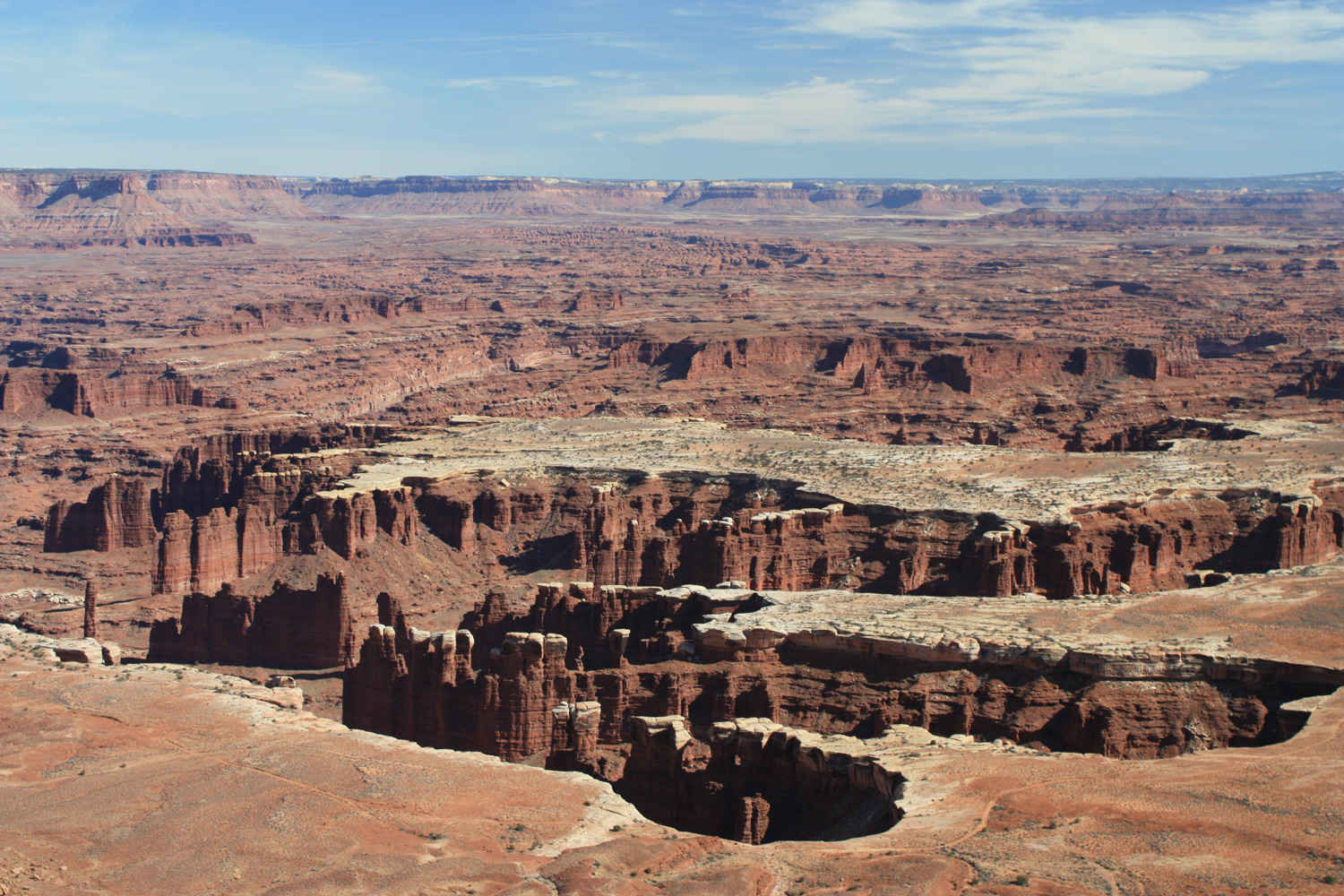 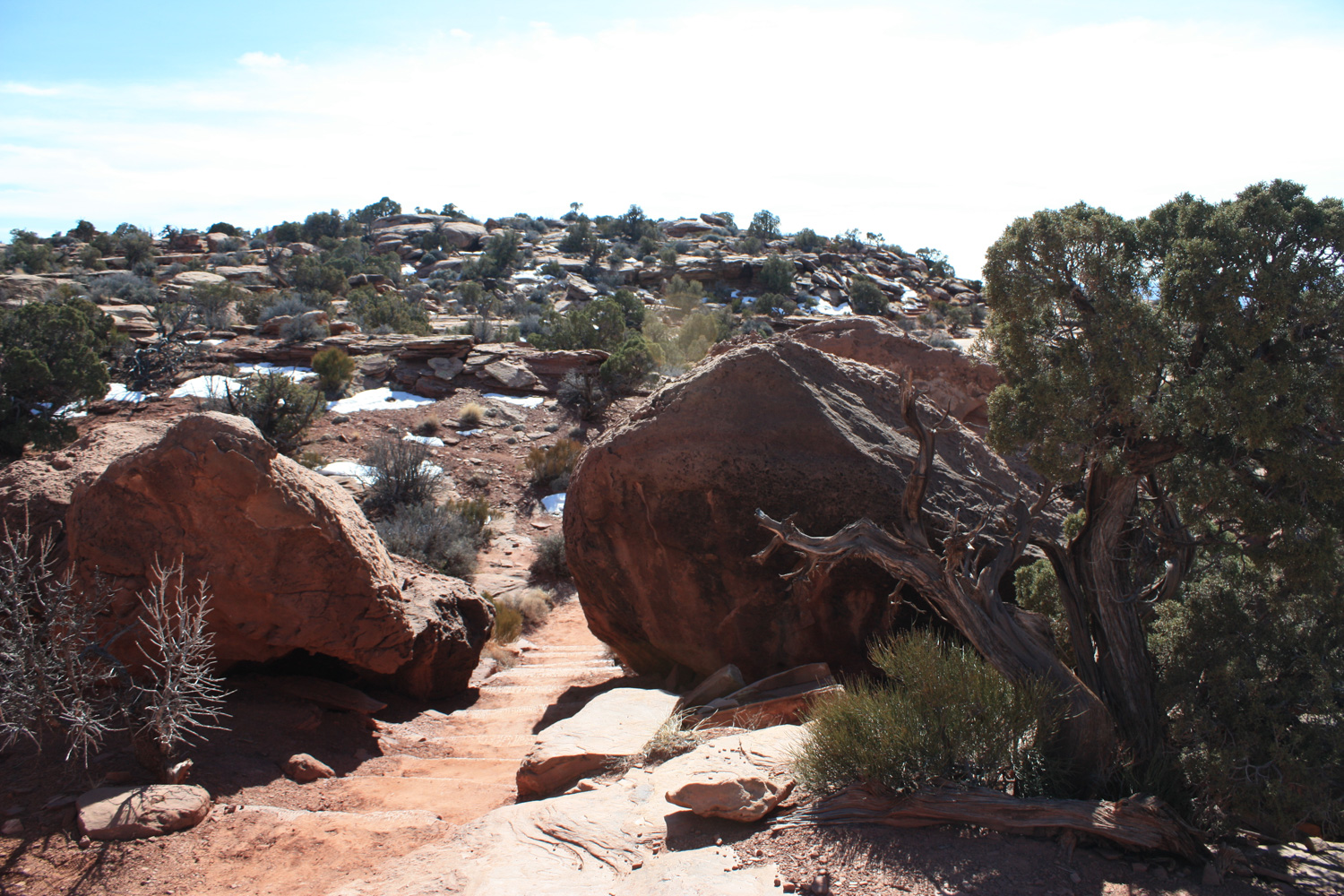 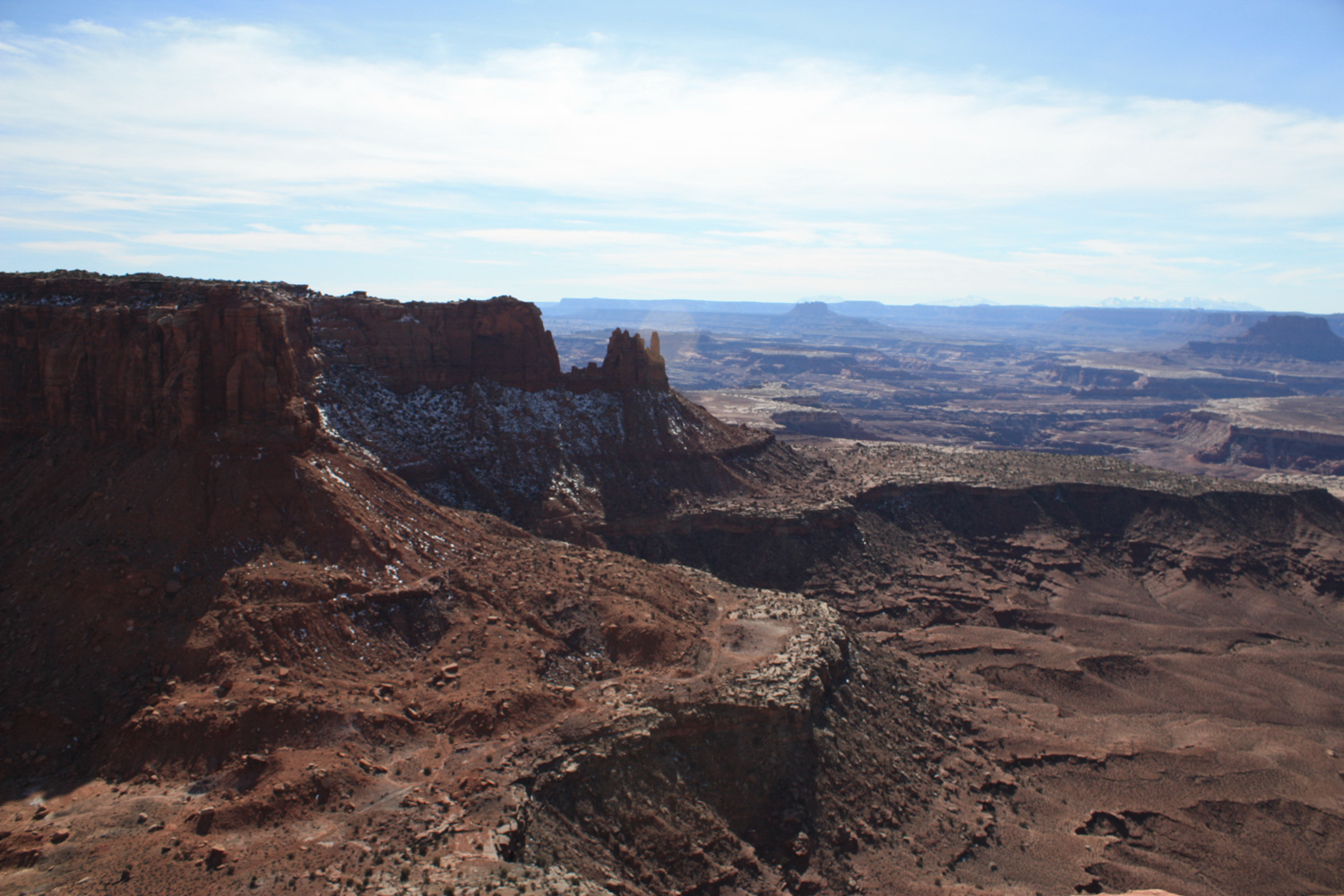 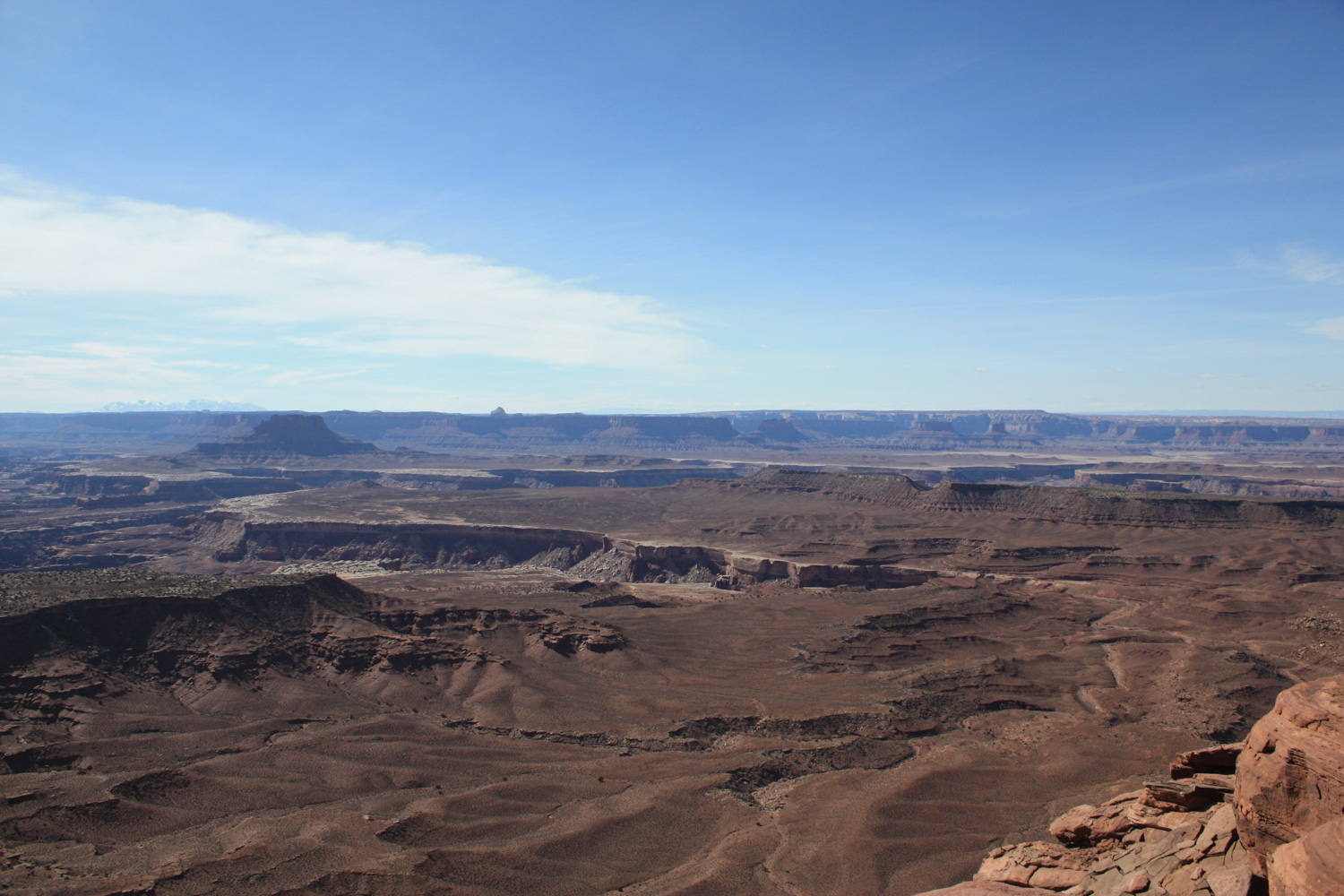 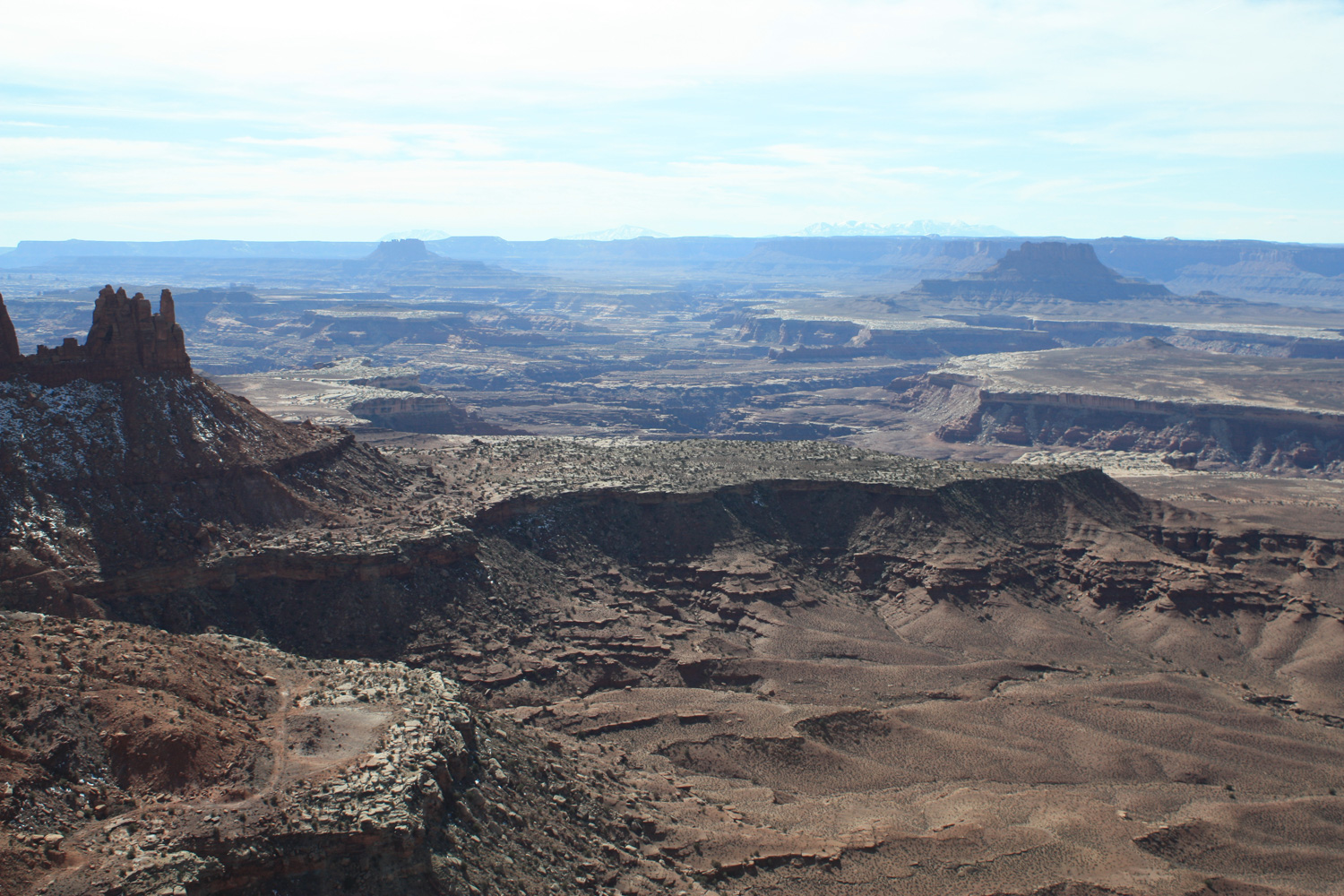 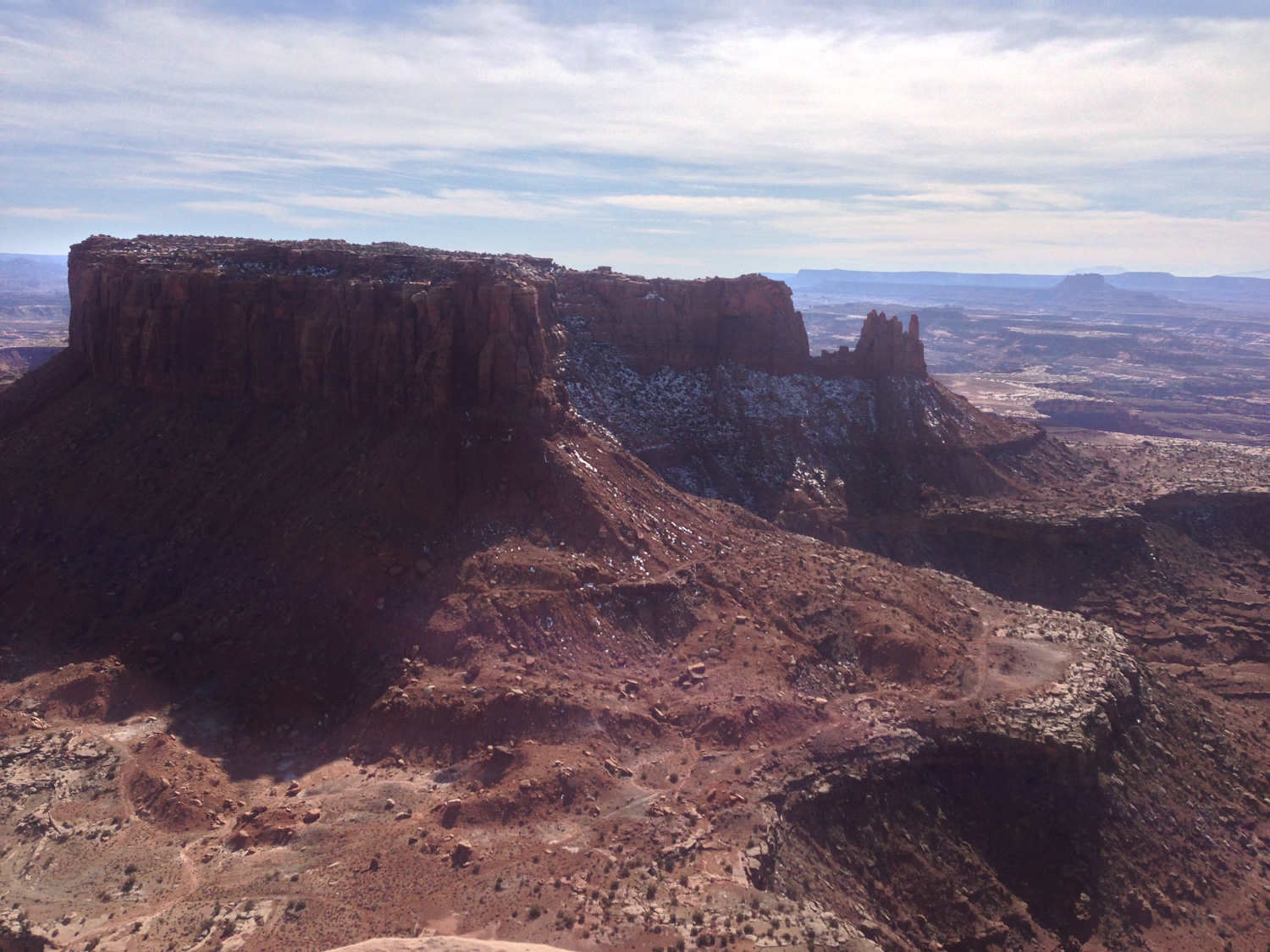 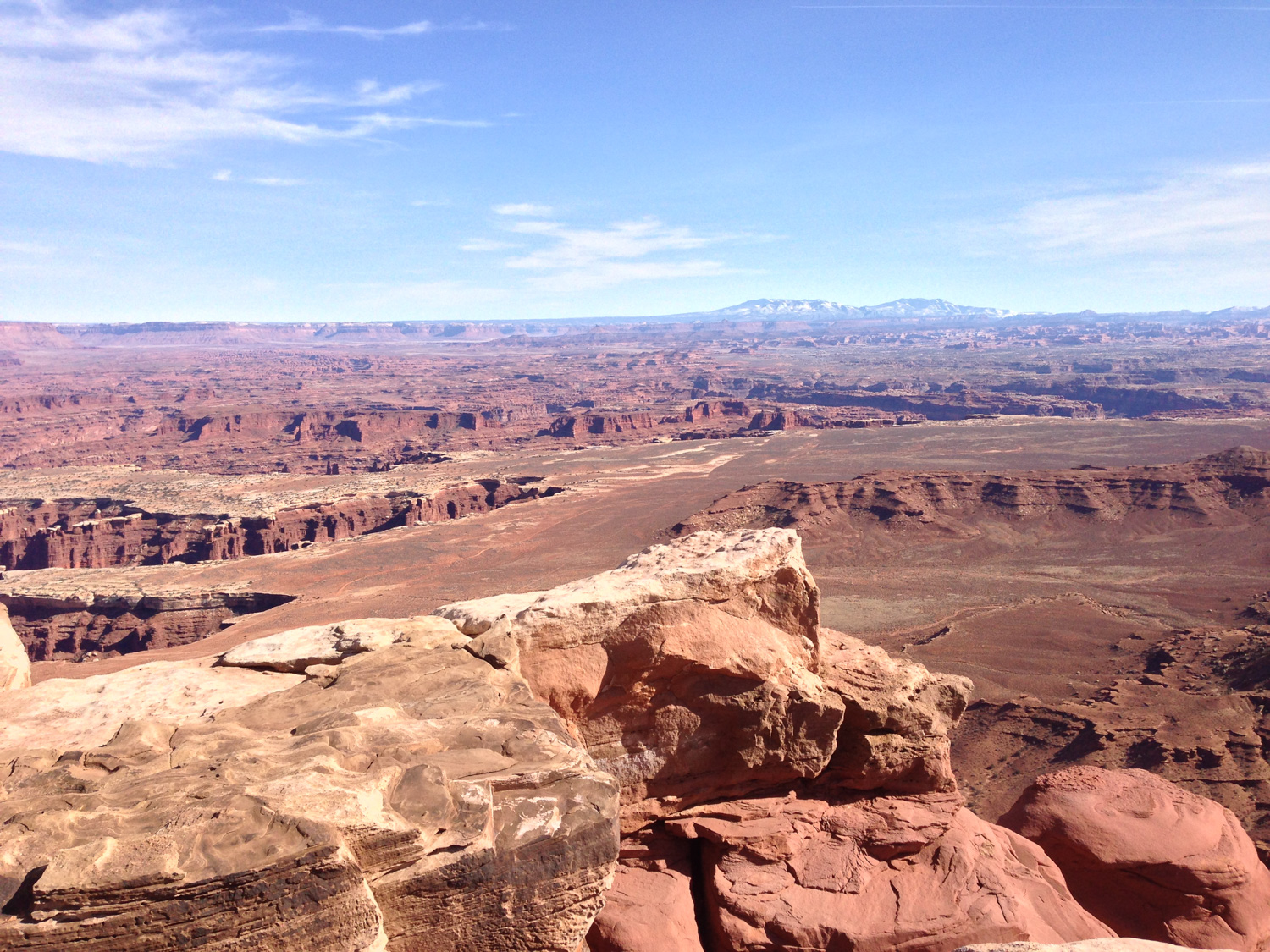 This trail is popular and very well-maintained. It begins on a sidewalk with well-formed stairs carved into the rock but eventually becomes a slickrock trail as it approaches the edge of the canyon.

From Moab, head north on 191 for about 11 miles, then turn left onto UT-313 West. After 14.6 miles, stay straight to continue onto Grand Point Road and enter Canyonlands National Park (fee applies). Stay on Grand Point Road / Island in the Sky Road for another 19.1 miles, when it ends at the trailhead for Grand View Point.