1. What is the second tallest peak on the planet?

2. What’s the second tallest peak in the Sierra Nevada?

4. What’s the second tallest peak in the United States, including Alaska and Hawaii.

Give up? I did. I don’t know any of those things without the internet whispering into my ear. How about you? If you don’t know either, don’t trouble yourself. We seem to have a powerful hunger for the superlatives and the famous name, but once we move past that, our knowledge and our corresponding desire to tackle anything that doesn’t come in first seems to fall off a figurative cliff as deep as Tenaya Canyon. (See the end of the article for the answers).

This tendency is no different with Yosemite National Park’s signature landmark, Half Dome. Every year, up to 225 people per day – limited only by a permit system –  attempt to summit the top of the dome by way of a notoriously sketchy cable system after a monstrously steep and crowded hike. Yosemite Valley itself is often more congested than Uncle Vito’s cardiovascular system. And, as necessary as the permit system is for controlling overuse, I don’t think anybody jumps for joy at the thought of more red tape in their lives. 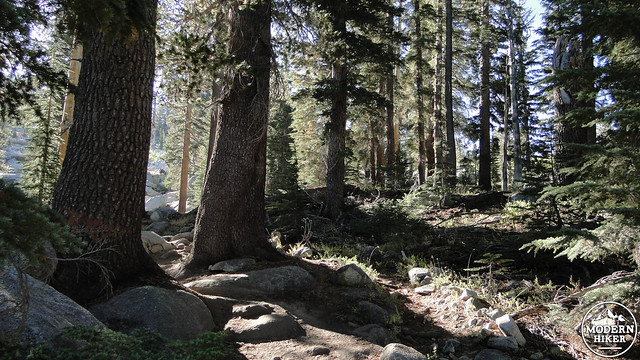 This isn’t to say that Half Dome isn’t a great and worthy experience. It is, however, an example of our love affair with the superlatives. This is a lot of trouble to go through to climb a mountain, especially in a place that is so loaded with mind-blowing viewpoints that you can spray half a dozen of them with a good sneeze. 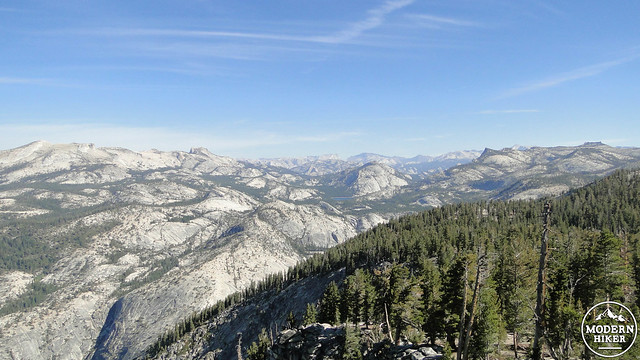 Fortunately, with a minimal amount of effort, leave crowded Yosemite Valley, follow a trail from a gorgeous subalpine lake through dense forest, and attain the summit of a peak whose views are every bit as, if not more spectacular than Half Dome. You can do this without a permit, without a permit fee, without having to wait in any kind of line, and with a minute fraction of the 225 or so of your closest friends with whom you’d share Half Dome’s summit. 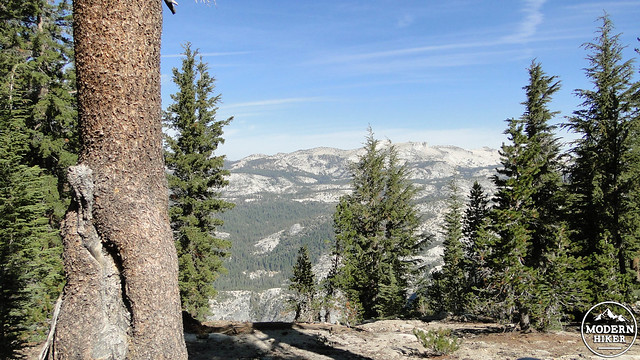 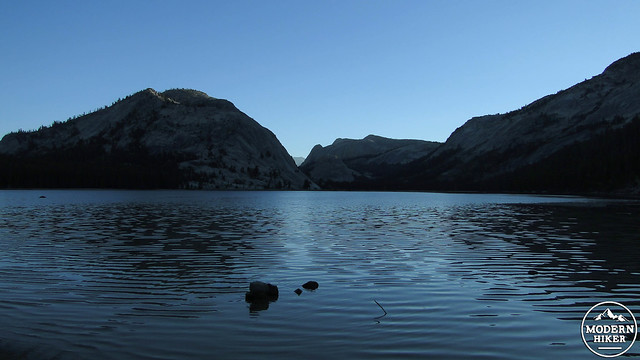 To reach nearly 10,000′ glacial arête (a rock fin caused when glaciers sheer away both sides of a large rock mass), you will want to start at Tenaya Lake, which lies on the south side of Tioga Pass Road. This sparkling lake is a destination in its own right, and casual hikers often follow a popular trail along the banks of the lake. Skirt the southern base of the lake past the lake’s outlet and then make a sharp bend to the right to join the Cloud’s Rest Trail. 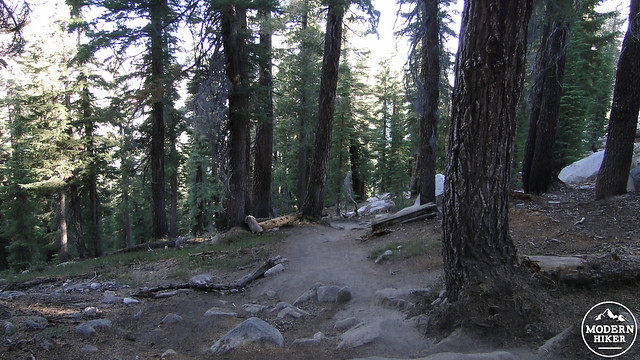 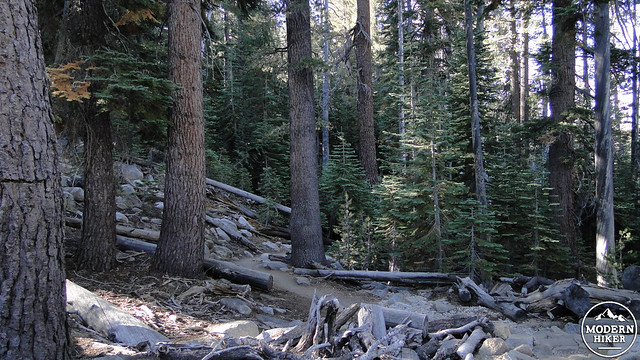 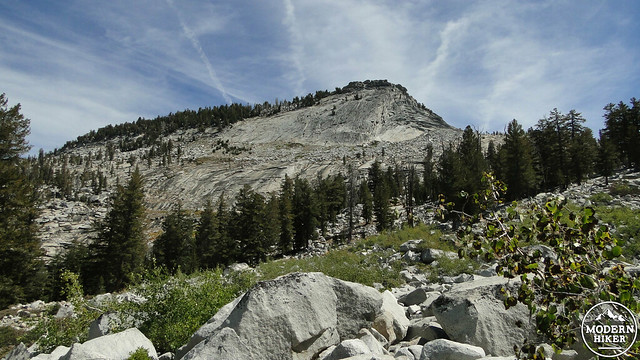 After leaving the lake, the Cloud’s Rest Trail makes a nearly imperceptible ascent through a dense forest composed primarily of lodgepole pine and mountain hemlock. You approach the northern and northeastern rim of Tenaya Canyon, which drops several thousand spectacular feet on the right. After the first 1.5 miles, you’ll reach the base of a steep slope, and you’ll commence a rather grueling 1,000′ switchbacking climb that represents a huge chunk of the elevation gain on this route. At the top of the climb, you arrive to a saddle where you’ll meet a junction with the Sunrise Lakes Trail. Continue straight through the junction. 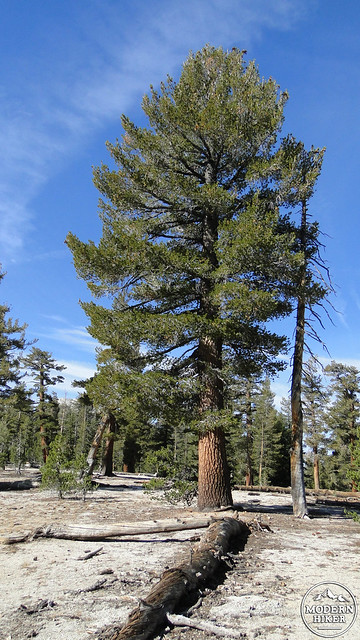 On the other side of this junction, the trail drops down the other side of the saddle before resuming a relatively flat stretch along a bench overlooking Tenaya Canyon. After crossing a rocky, open space dotted with stunted aspens beneath the stern gaze of some a granite rock formation, you will reach a small, seasonal pond on your right. At this point, you may notice a subtle shift in the vegetation. Western white pines join the hemlocks and lodgepole pines, adding a touch more diversity to the forest around you. 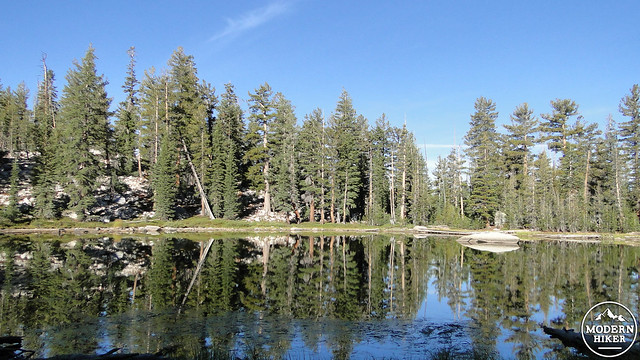 After the pond, the trail will dip into and out of the drainage of creek, with the crossing coming at 4 miles. The trail climbs back out and continues southwest, coming to a junction with a trail branching off on the right that connects to the John Muir Trail at 4.5 miles. Continue past the junction, and follow the trail as it bends to the right to climb up to the base of Cloud’s Rest. From here, you’ll get your first taste of the views at the top. This sandy, open spot features vertiginous views down into Tenaya Canyon, with vistas over the northern and eastern Yosemite Wildernesses unfurling into the distance. 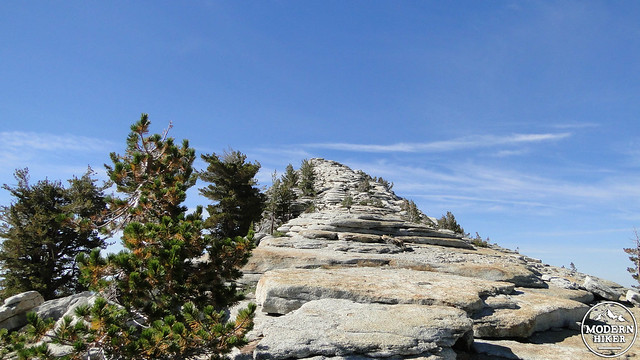 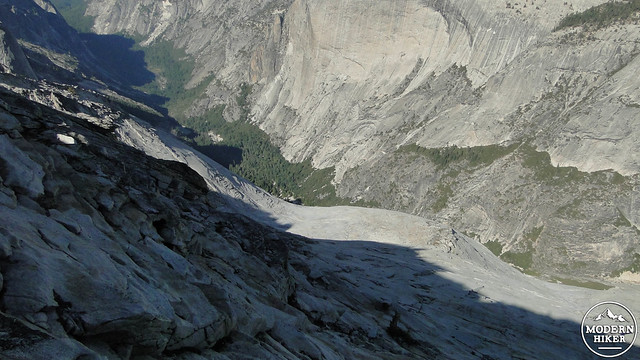 You’ve now reached the bottom of the Cloud’s Rest formation. Hikers with a fear of heights may experience a bit of anxiety on the scramble up to the summit. The spine of Cloud’s Rest varies from about 10 to 20 feet in width with a 4,000′  drop-off into Tenaya Canyon on your right and a slightly less severe 2,000′ drop-off into Sunrise Creek’s canyon on your left. There’s no trail to speak of, but the direction is clear, and the rock-hopping is easy enough. 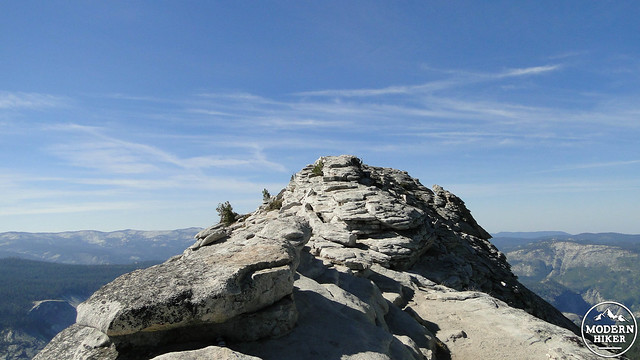 After a few hundred breathless yards of rock-hopping, you’ll find yourself atop the summit of Cloud’s Rest. Drop your pack, grab a snack, and pull up a piece of boulder; the view here is nothing short of breath-taking. Looking due southwest, you’ll see the towering profile of Half Dome. If you squint, you may notice the parade of nearly microscopic (from this vantage) figures making their laborious ways up the side of the dome. Beyond Half Dome lies Yosemite Valley, with most of its world-famous landmarks visible nearly 6,000′ below. Tenaya Canyon and Sunrise Creek Canyon drop off on your right and left, respectively, while Yosemite’s rugged backcountry stretches out for miles in every direction. 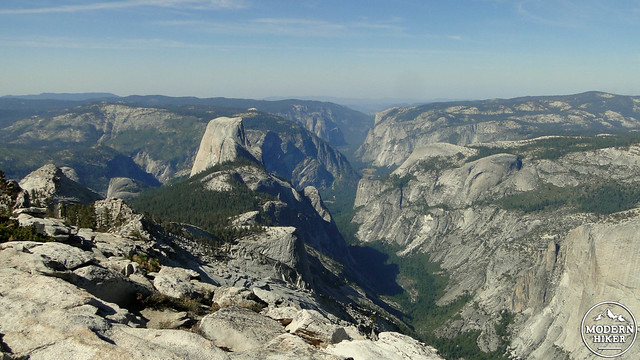 A note for backpackers: You may feel a temptation to set up camp along the summit ridge of Clouds Rest, and there are a handful of bivy sites that look particularly promising. However, the park forbids camping within 100 feet of the trail, and since 100 feet from the trail on the Clouds Rest Summit ridge means somewhere down the severe slopes on either side of the summit, you can forget about camping here. There are a number of spots below the summit and along the trail from the Sunrise Lakes Junction that you can use, and a headlamp and caution will enable you to enjoy a summit sunset or sunrise if you’re camped nearby.

From here, it’s a simple matter of making your way back the way you came to Tenaya Lake. If you have energy remaining, you can walk along the lake’s south shore. You can also take a dip, or simply sun bathe for a bit near one of the beach like coves near its outlet. 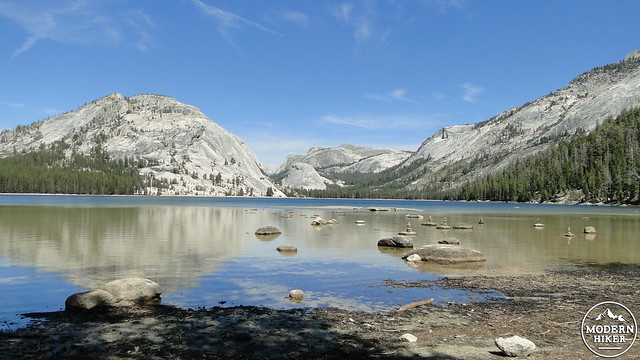 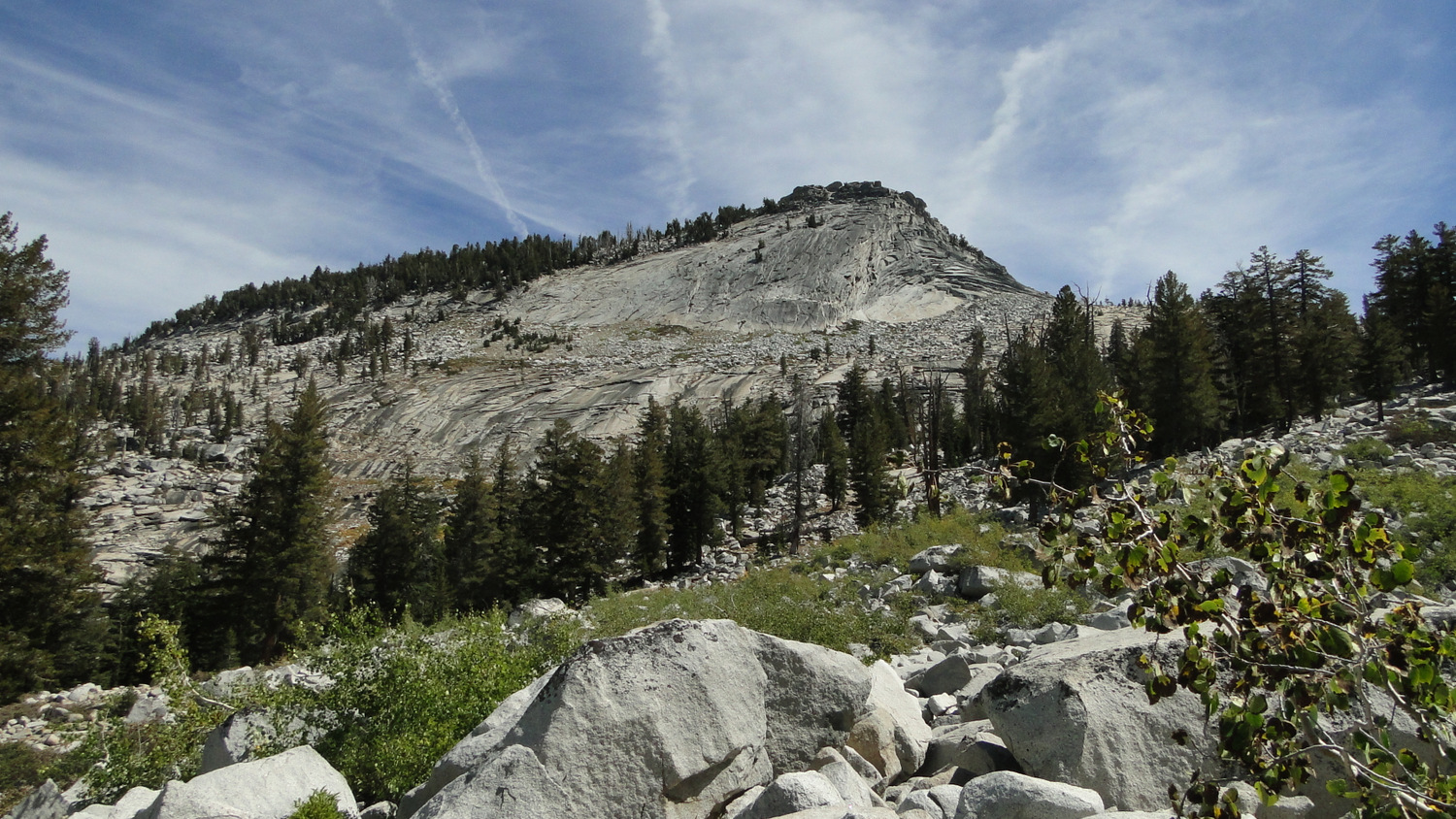 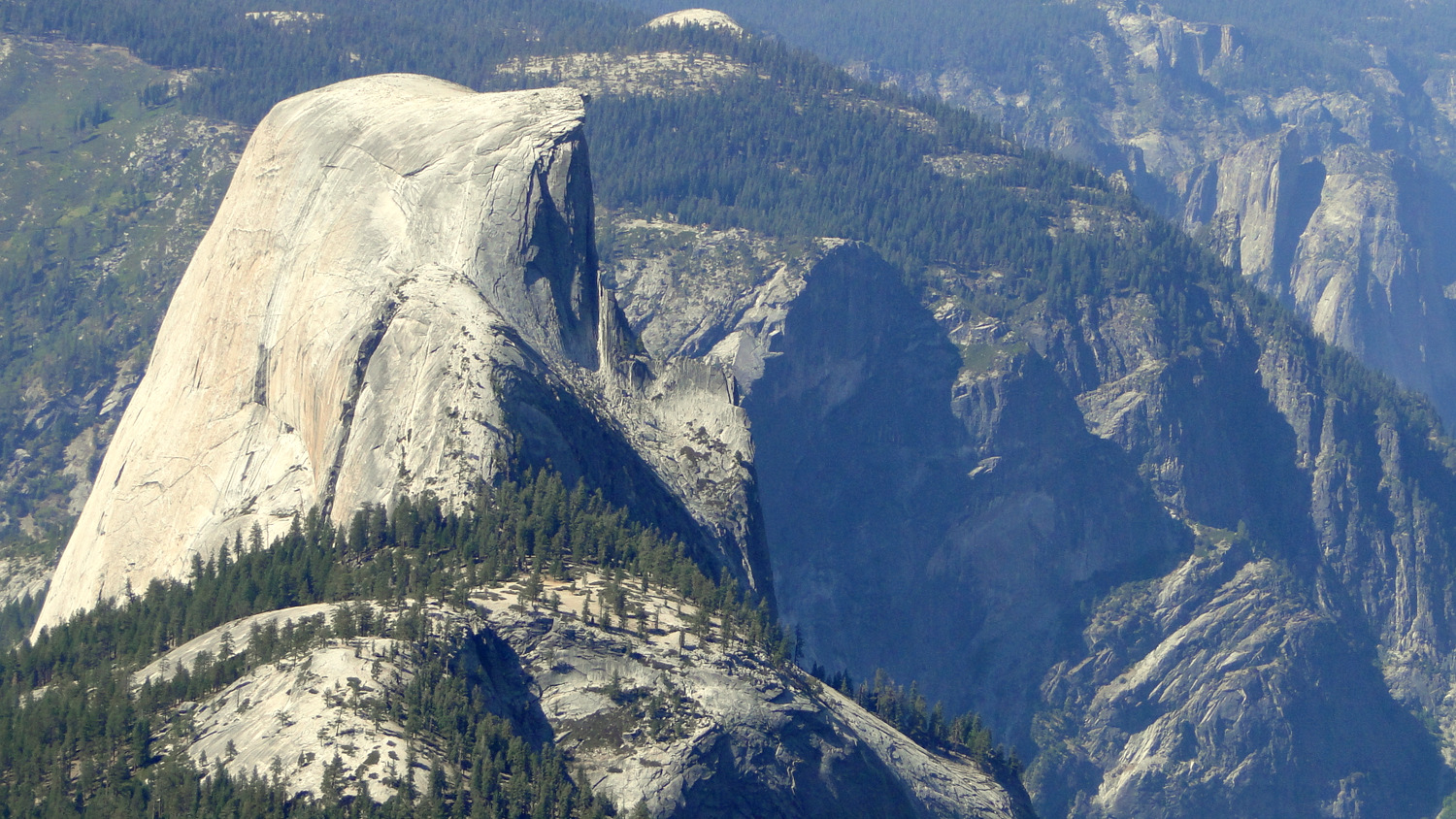 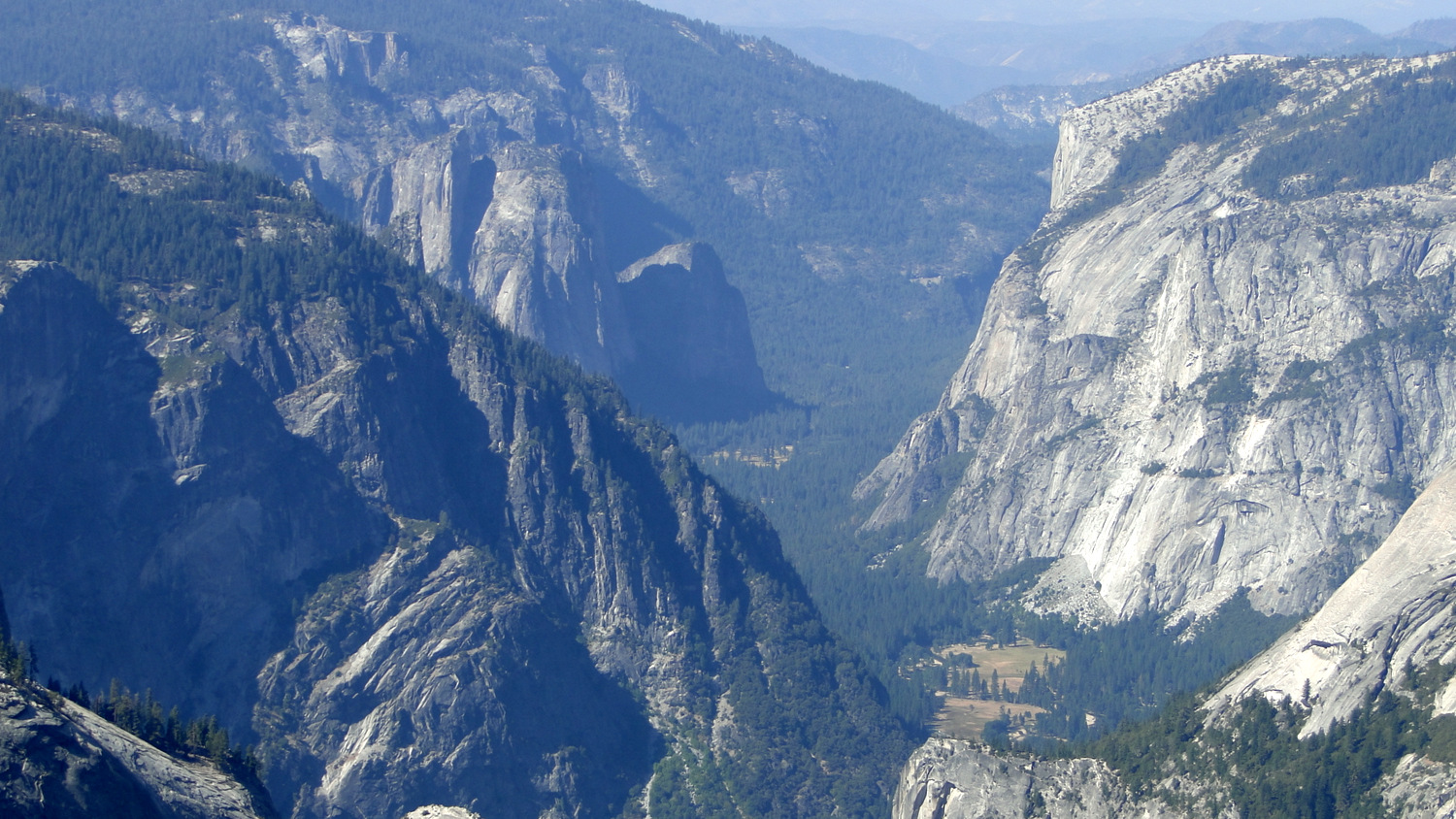 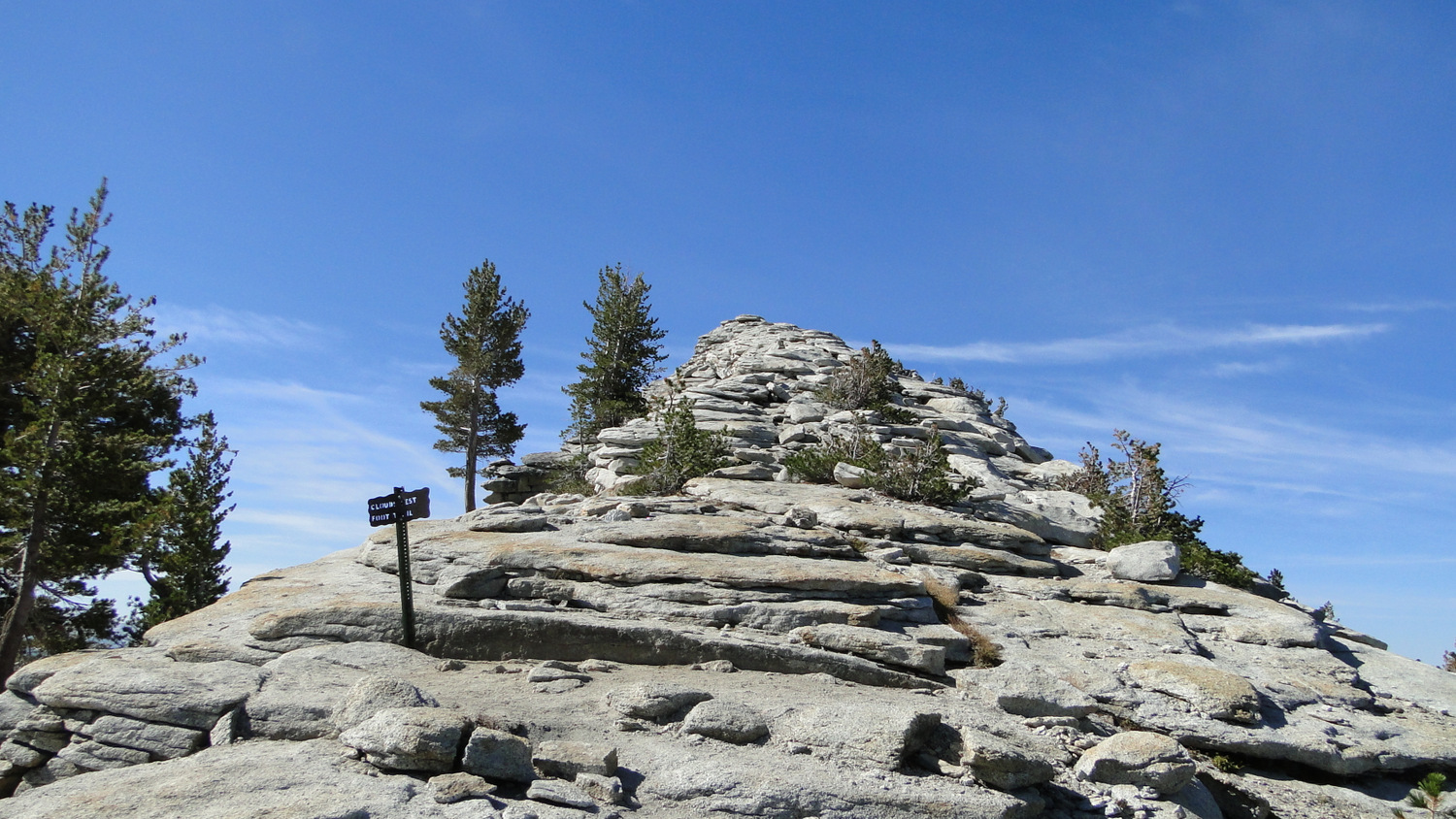 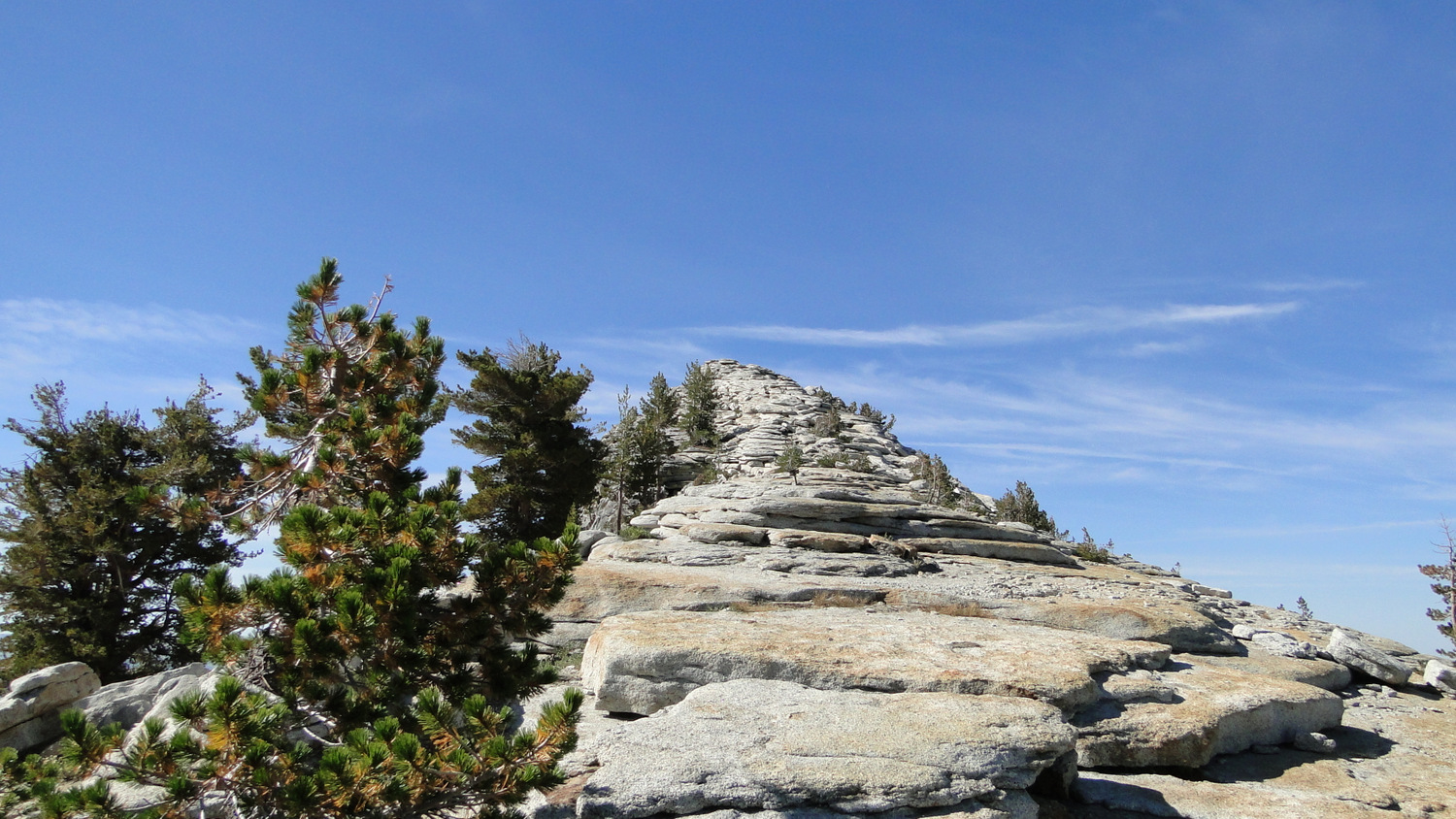 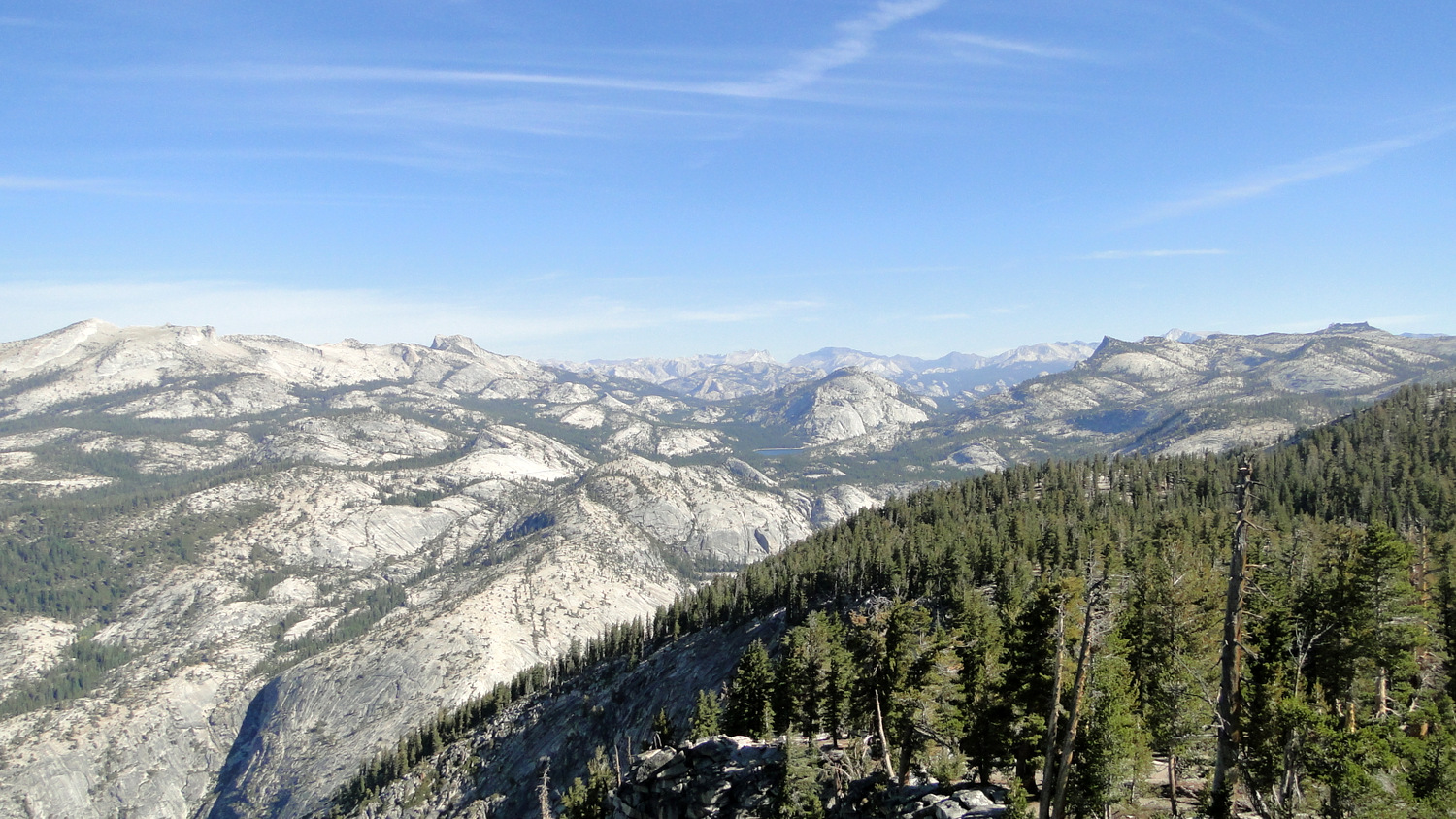 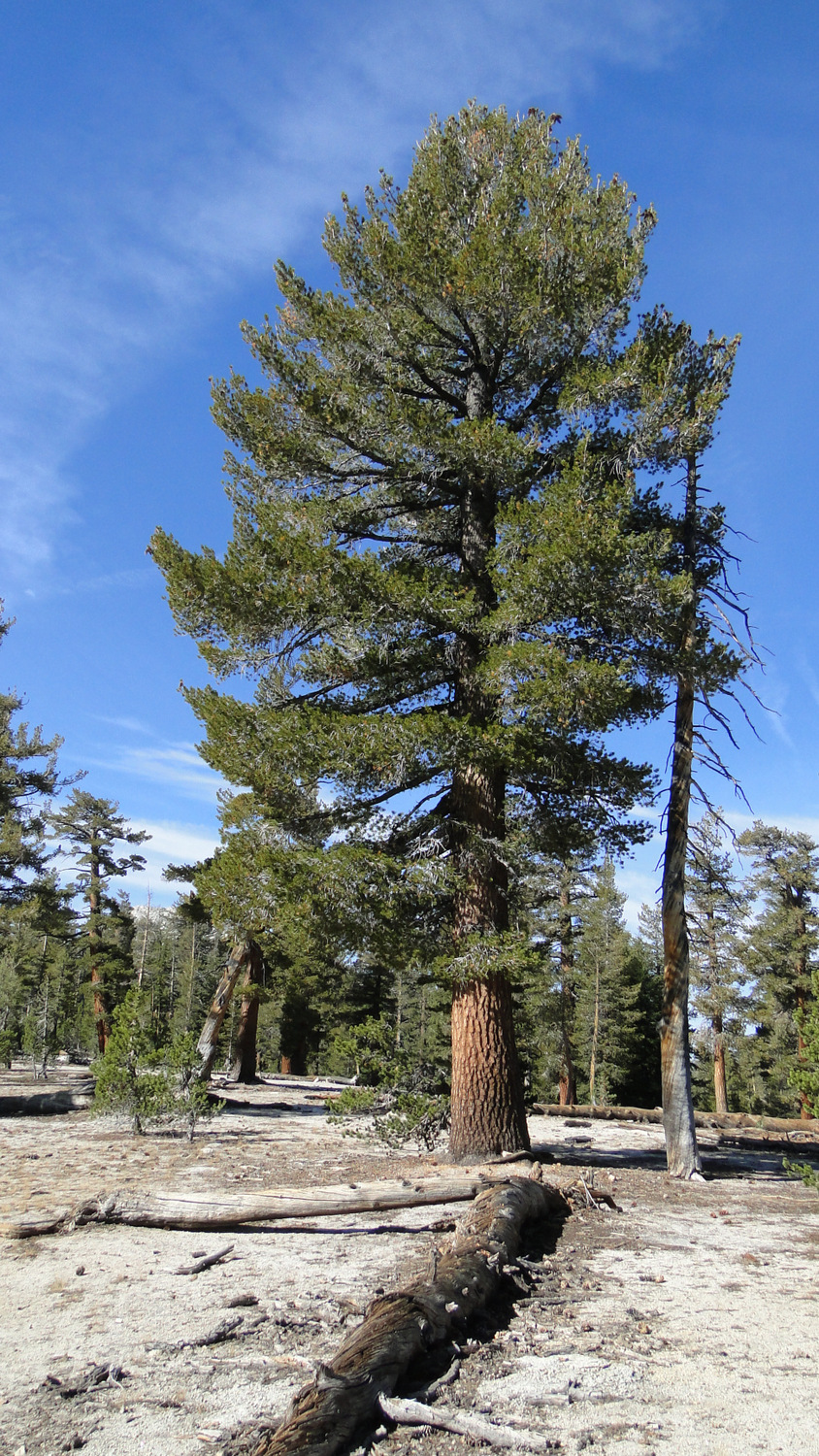 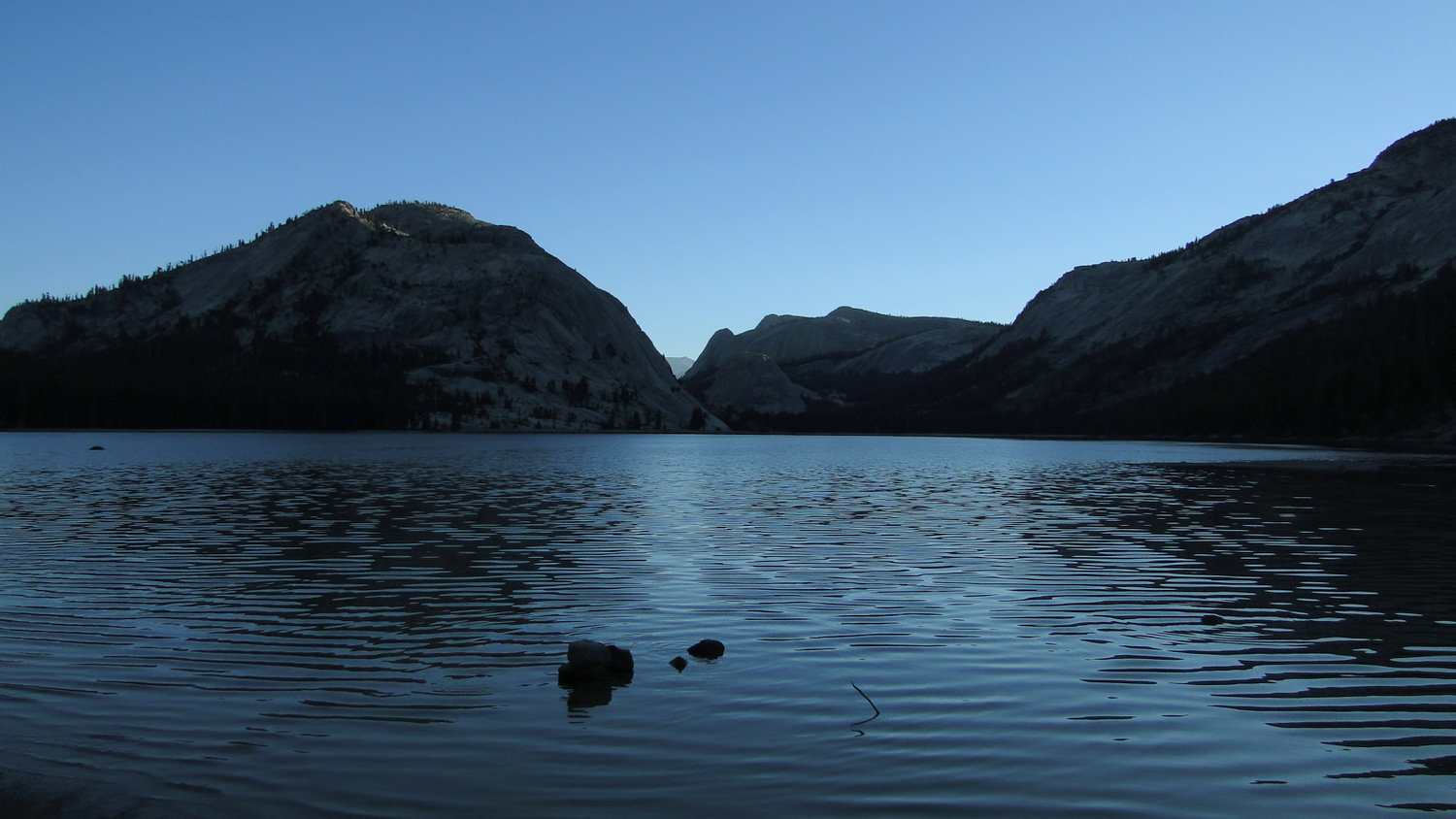 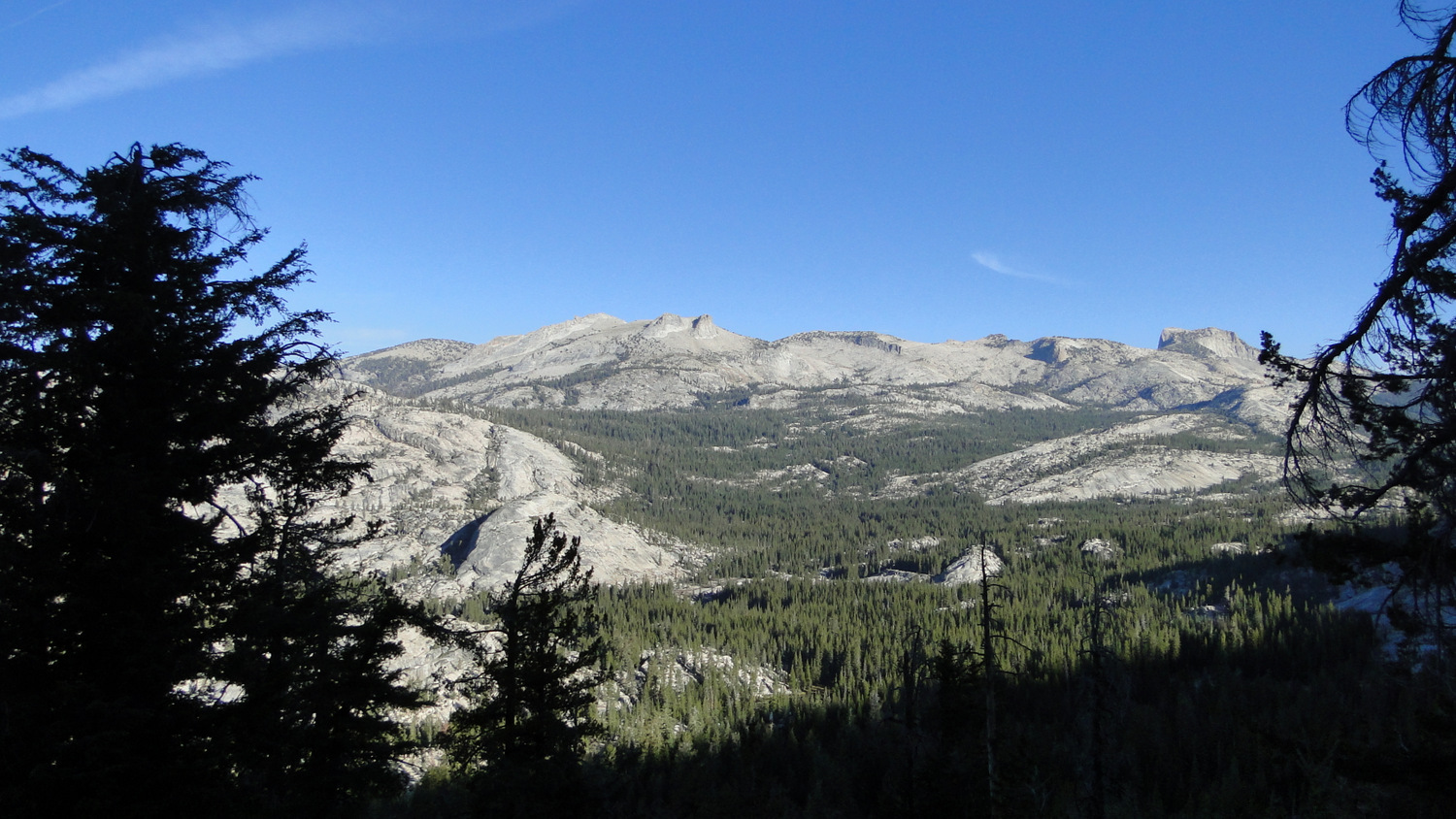 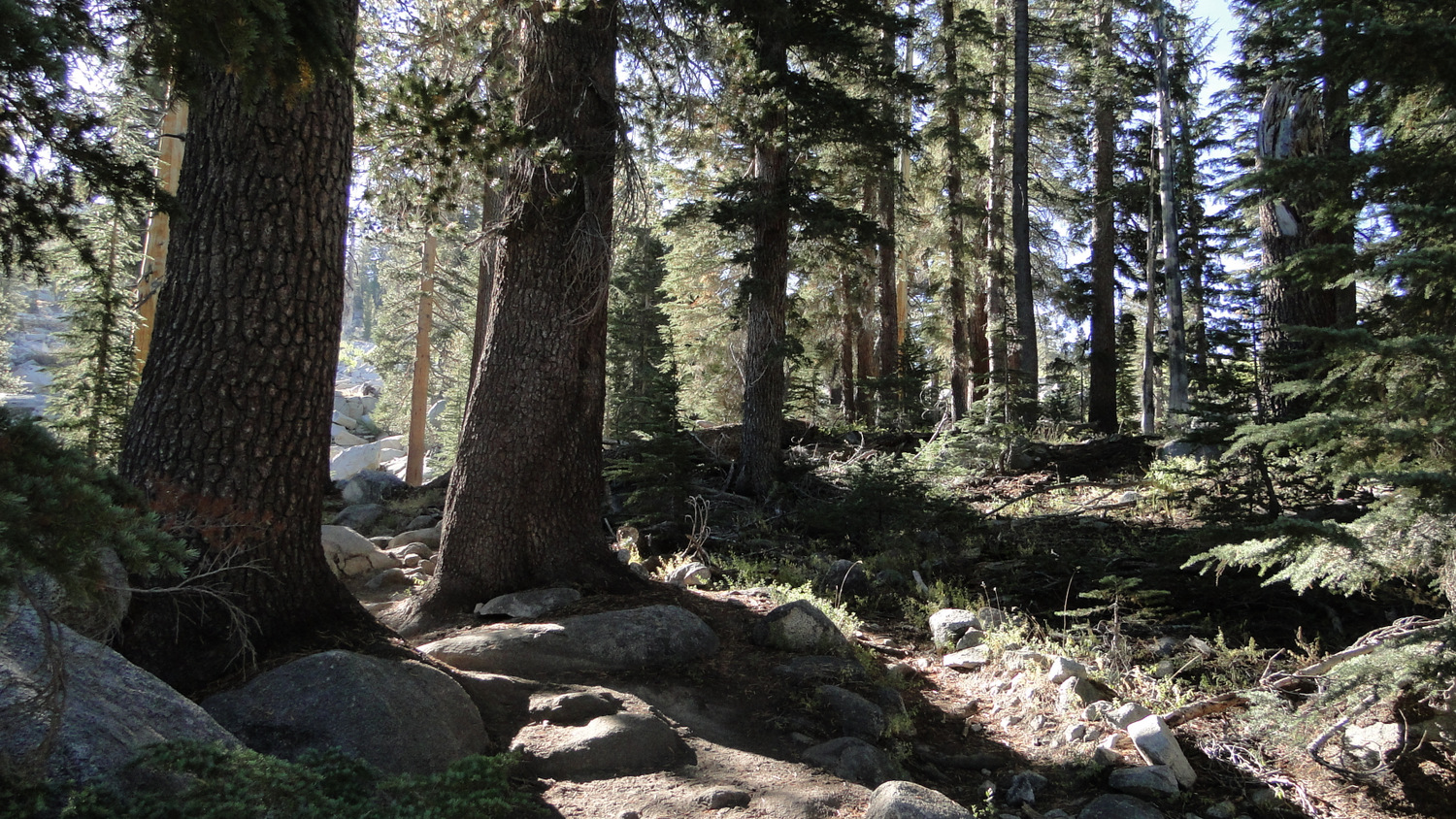 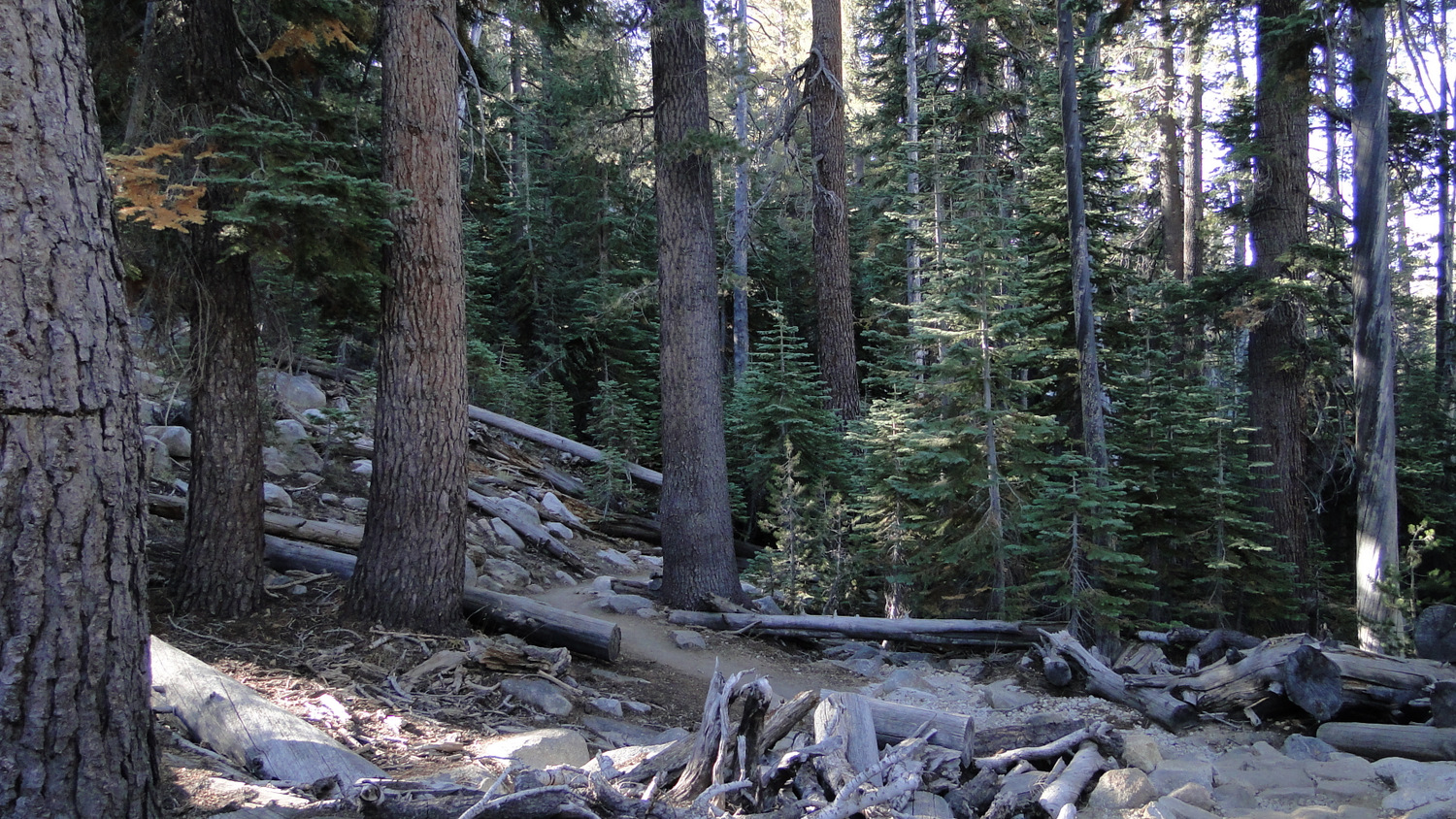 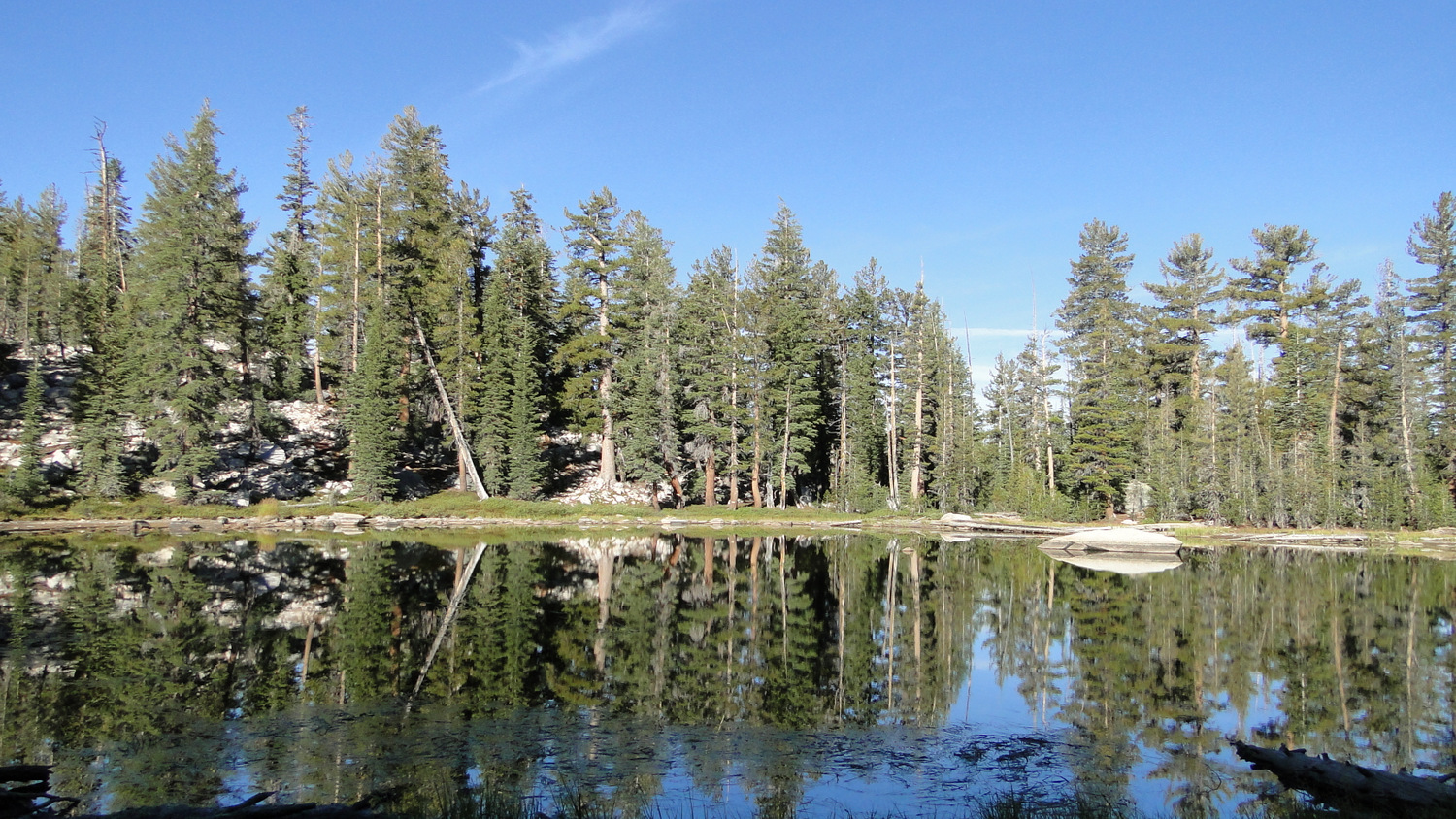 The trail is well-marked, well-traveled, and in good condition.

There are numerous campgrounds available within Yosemite National Park, included crowded mega-campgrounds in the Valley. The nearest campground, however, is Porcupine Flat, which is a first-come, first serve campground along Tioga Pass Road.

From Fresno, head north on Highway 41 for 101.8 miles, passing through Oakhurst, Mariposa Grove, Wawona, and the entrance to Yosemite Valley before reaching a junction with Highway 120 (Tioga Pass Road). Turn right onto 120, and continue for another 31 miles to the Sunrise Lakes Trailhead. The trailhead is on the right side of the road. Street parking is available.