On July 5th, 2011, a 16 year-old man died after falling 80 feet into the swimming hole at Cedar Creek Falls. Two days later, the trail from Ramona was closed and remained closed for two years. On July 9th, 2012, a 19 year old woman was found unconscious on the Cedar Creek Falls Trail approaching from the Julian side. After medevac lifted her out to Palomar Hospital, she was pronounced dead from heat stroke. At one point, the County’s emergency services were rescuing 3-4 people per week, and sometimes the total was higher. After years of complaints from nearby residents of drunken hikers peeing in their yards and the county’s rising costs of emergency services, all agencies and the locals decided something needed to change. 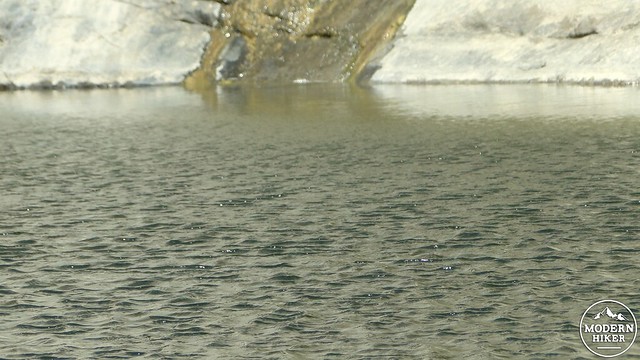 The cool, tranquil waters below the falls

I put off taking this hike for a long time due to its reputation and subsequent closure. This hike has long been known as the sort where hikers would walk in wearing flip-flops while armed to the teeth with alcoholic beverages. After hours of drunken frolicking, many would require rescue after failing to remember the hiking maxim “what goes down must come up.” In addition to that, the overuse of the trail by many careless hikers led to accelerated erosion that was destroying the natural beauty of the place. 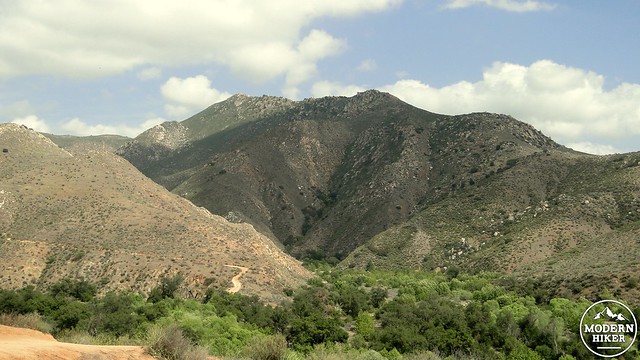 Saddleback Mountain with the Falls roughly in the center

The Forest Service re-opened the Cedar Creek Falls trail from Ramona in May of 2013 against the protests of the surrounding neighborhood and the County. As part of their efforts to make hiking the falls safer and to avoid further harassment to local residents, they instituted a permit system in conjunction with Recreation.gov. The 75 person per-day limit is designed to eliminate overuse, while the permit system ($6 at time of writing) is intended to slow people down and encourage use from folks who come prepared, both physically and logistically. Furthermore, NFS rangers, volunteers, and local law enforcement now patrol the trails regularly, and there are stiff fines for anybody jumping off cliffs, drinking alcohol, and hiking without a permit. 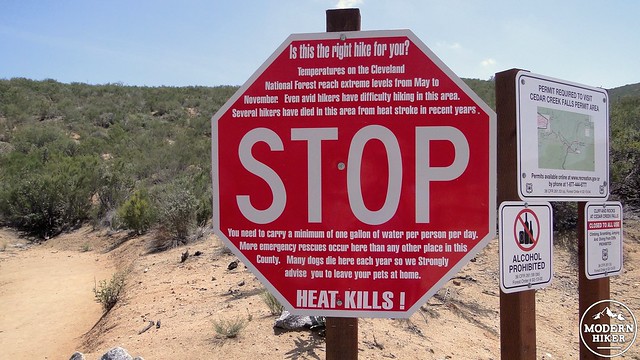 Warning signs at the trailhead

I arrived at the trailhead knowing none of this, but was able to secure a permit using my phone. Before starting, a volunteer checked that my permit was valid and asked me how much water I was carrying. Immediately after the volunteer checkpoint, I was confronted by an enormous stop sign telling me about the dangers of taking this hike. While the constant reminder of danger and death are not particularly pleasant ways to start a hike, I was comforted to see that the NFS and local law enforcement were taking this so seriously. This is how it should be, as this is a very serious hike. 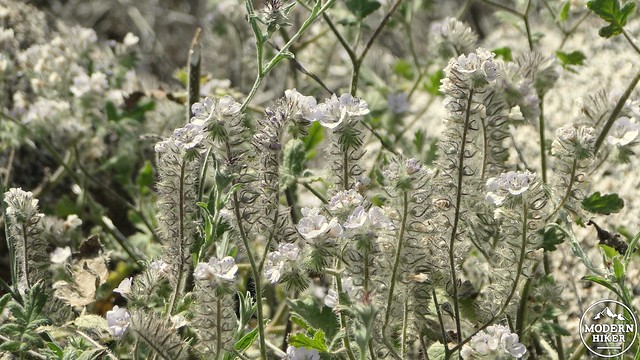 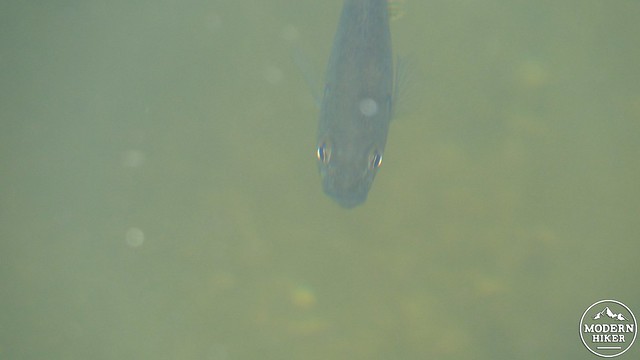 Fish in the pool

The sad thing is that all of the drama and red-tape cannot obscure the fact that this is a spectacular hike. The gorge is as dramatic a landscape as you will find east of Anza-Borrego, and the sense of space recalls the Grand Canyon as if the Gorge were a miniature painted in beige instead of red. The riparian strip of the San Diego River at the bottom of the gorge is full of shady cottonwoods, willows, oaks, and sycamores. And, I actually stopped dead in my tracks when I first saw the grotto that contains the waterfall. Cedar Creek Falls is a stunningly beautiful spot. 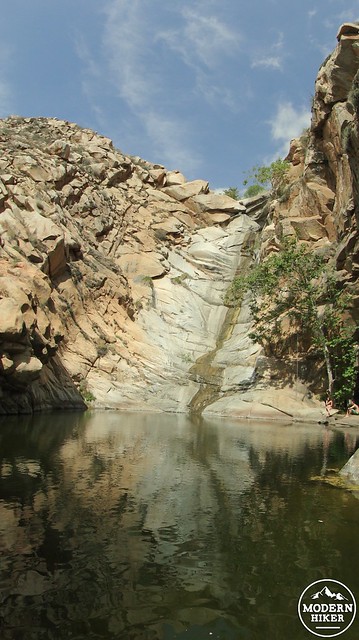 Starting at the trailhead, make your way past the volunteer, commend him or her for helping to keep people safe, take his or her advice to heart, and pass through the gate. The trail will immediately begin to descend into the gorge, and due to the fences and signs erected to prevent erosion, there aren’t any decisions to make until you reach the bottom. Enjoy the scenery that opens up when you pass a bend at the half mile mark. The San Diego River Gorge opens up beneath you while the Cuyamaca Mountains loom in the background. 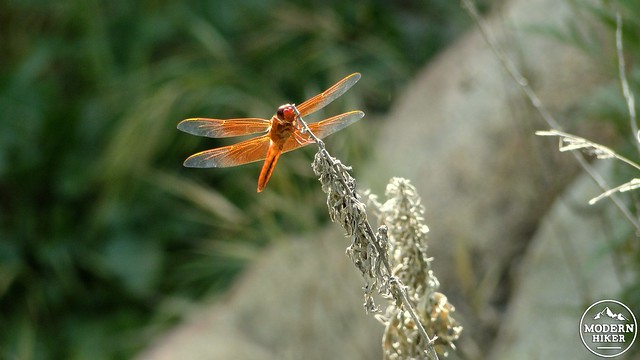 Be mindful not to cut switchbacks as you come closer to the bottom. The Forest Service spent a lot of time and money restoring the landscape and trail. Soon, you will reach a thicket of willows and cottonwoods that marks the course of the San Diego River (dry at time of writing). Pass through the oak and sycamore woodland to a four-way junction beyond the river. This junction meets Eagle Peak Road, which runs north to Julian and south to the El Capitan Reservoir. Cross Eagle Peak Road and continue ahead as the trail begins a gentle incline into a riparian strip full of oaks, cottonwoods, and sycamores. 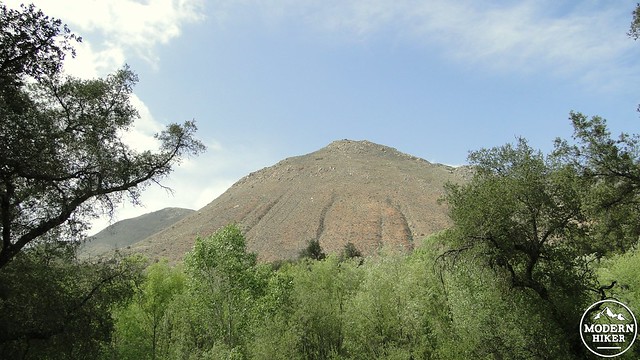 Looking up from the Gorge

Carefully pick your way over the rocky trail until you come suddenly to Cedar Creek Falls. The grotto contains a deep pool of fresh water where you’ll see a number of fish floating near the surface. Be careful on the polished granite boulders, which are deceptively smooth. Note that you are unlikely to have the place to yourself unless you come here on a Wednesday morning around sunrise. However, if you can possibly come during the week, you are less likely to find people swimming, splashing, and talking loud enough to hamper the beauty of the place. If you don’t mind that sort of thing, any time is beautiful, but it’s best to avoid the heat of the day between 11 a.m. and 4 p.m. 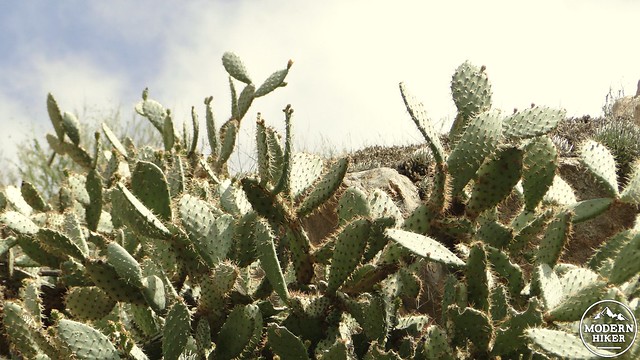 Prickly Pears near the falls

When you have taken in your fill of this splendid spot, turn around and head back to the trailhead. My suggestion is that you move slowly and deliberately, drink liberally, eat salty snacks, and bring a lot of sun protection. For avid hikers, this stretch will simply be an uncomfortably hot climb that is not particularly difficult. For casual hikers and novices, this will be a serious climb without shade and with possibly searing heat. Rest often. Better to get there eventually than not at all. 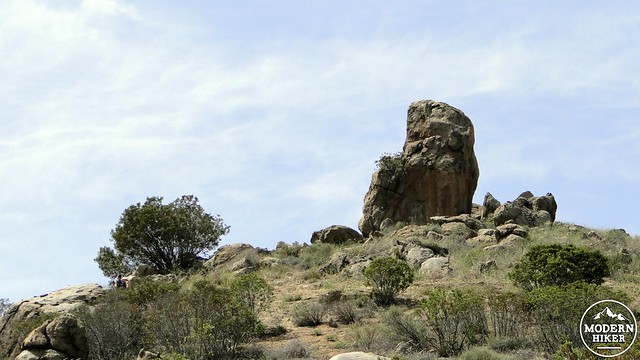 Outcrops on the descent

Despite countless signs warning about drinking and diving, I saw evidence of both on my hike. I picked up three beer cans and a water bottle and lugged them back out. I saw one man jump off of a twelve foot cliff. All of the people there were using their most outside of outside voices. I left the scene when a pack of teenage men came barreling through the underbrush. I know that this might make me sound like a curmudgeon, but it was a little disappointing to see that the permit system, the laws, and the cautionary measures are not completely eliminating the problems.

I hope that this hike’s baggage doesn’t put you off from hiking it. It really is a stunning place, and with adequate preparation, you’ll have a great experience. Hopefully, more people take the dangers to heart and allow this popular spot to retain its beauty and character without further tragedy.

Some things to know:

– It’s best to get your permit before the hike. You can take a screenshot of your emailed permit confirmation on your smartphone, and the rangers and volunteers will accept it as valid. I’ve heard some people moan about the permit system, but those are usually the people who show up at the trailhead without one and have to delay their start for 15 minutes while getting the permit on their phones. It’s easy if you do it ahead of time.

– If you see any trash on the trail, please consider bringing it back up with you. I know it sucks to clean up after irresponsible hikers, but there are some who believe that ignoring trash puts a responsibility on the one doing the ignoring as well.

The trail is beautifully maintained and easy to follow.

Hikers can camp within the San Diego River Gorge using a handful of campsites near the river. Be sure to obtain a wilderness permit in advance of your trip.

From Ramona, take San Vicente Road until reaching Ramona Oaks Road. Turn left, and follow it to Thornbush Road, where you will turn left. The trailhead is at the end of Thornbush Road.

In Jan 2014, the CNF increased the daily number of permits from 75 to 91, based on the plan which said permits would increase if people followed the rules. In Nov 2014, the CNF is planning to cut back to 75 permits, because locals in that neighborhood don't want hikers to use the public roads to access a public trail. Comments are due by Dec 18. http://www.fs.fed.us/nepa/nepa_project_exp.php?project=45698

Thanks for giving the name of that flower! Yeah, it really is a great hike. If you do it, try it during the cooler months. Not only is it more comfortable, but the waterfall could be anywhere from a steady flow to a gushing torrent.

You've really made me want to hike there!

Your unknown flower looks like a Phaecelia. My bet is on Phacelia ramosissima