A 2.8 mile loop through the northern section of Elysian Park. This route through a park next to Dodger Stadium features a surprisingly rugged single-track overlooking the Golden State Freeway (which is nicer than it sounds) and paved and dirt paths through Elysian Park proper. This route passes soccer fields, barbeque pits, the Los Angeles Police Academy, and several jaw-dropping overlooks of Dodger Stadium and downtown Los Angeles before ending up at the public art overlook at Angel’s Point. A great little hike!

If you’d have told me there was an amazingly rugged, short stretch of single-track in Elysian Park that not only featured a few good obstacles but also managed to directly overlook the Golden State Freeway but somehow still had a great view, I probably would have laughed and asked if you were living in the right city – but I did this loop in the northern end of Elysian Park on a recommendation and I have to say I was very, very pleasantly surprised by what I found.

The trail starts at a gated fire road at the corner of Angel’s Point Road and Stadium Way. Unfortunately, there is no parking on the side of the road where this route begins, so you’ll have to park on nearby Elysian Park Drive. Due to the city planners of yore who thought it wise to put a major thoroughfare in the center of Elysian Park without any stop signs or crosswalks, you’ll also have to make a quick run across Stadium Way to get to the hike. 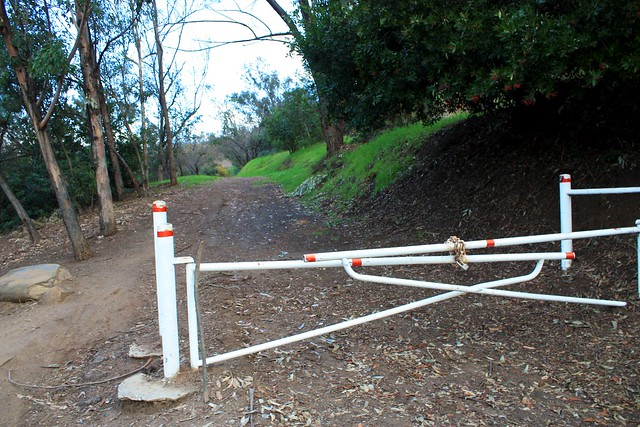 Although you will still be in earshot of Stadium Way at this point, the route loops around some of the ridges on the hill in a wide path through a landscape that does its best to make you forget how close you are to civilization. 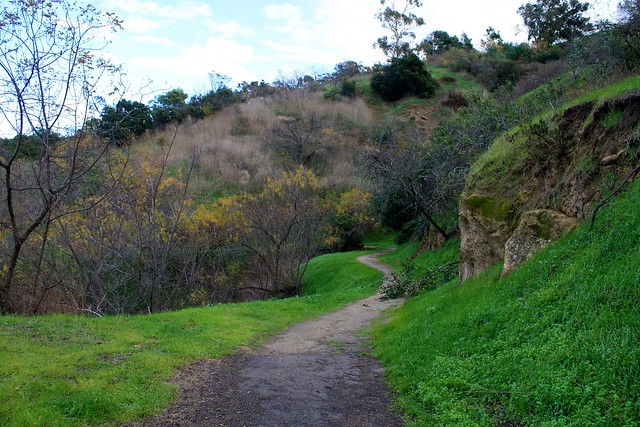 Just before the 0.2 mile mark, there’s an unusual rocky outcropping that local artists (or vandals, depending on your view) have painted to make look like a dragon. Now that’s not something you see on every hike. 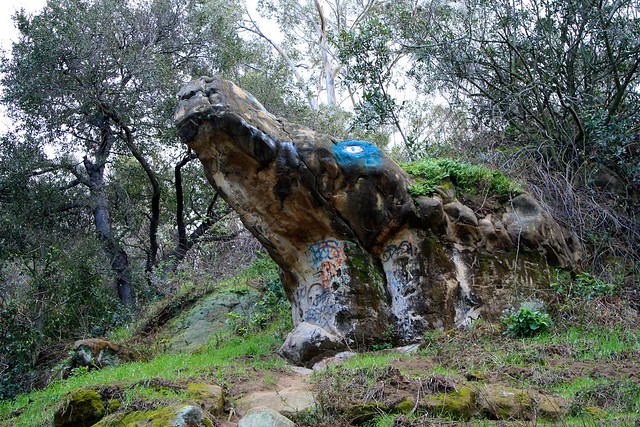 For the next 2 tenths of a mile, this trail meanders toward the northeast, looping around a few ridges and presenting you with some genuinely nice scenery. It’s similar to other trails in Elysian Park, but I didn’t see anyone else using this route when I was there – so those trailhead-access issues may help keep this one a little less traveled. 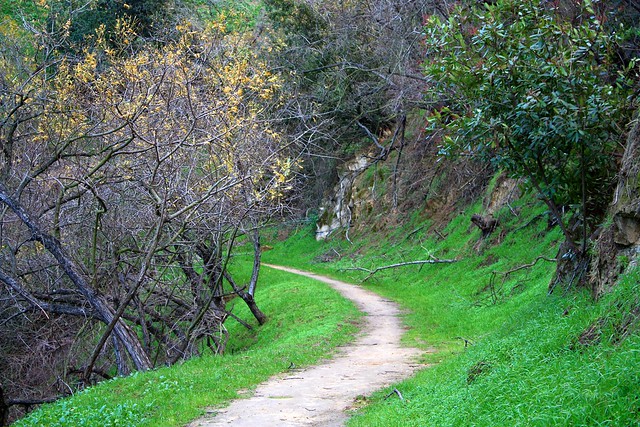 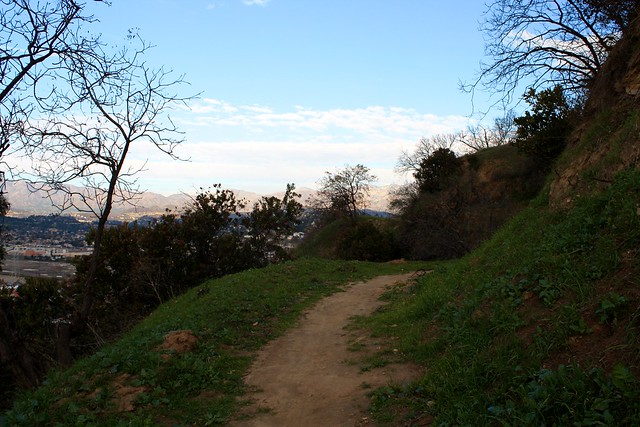 Just after the 0.4 mile mark, the trail comes to a dramatic overlook of the Golden State Freeway and the mountains to the north. I know hiking near a freeway doesn’t sound like the most exciting thing in the world, but there’s something about this trail that really works – it’s a nice combination of city and nature, and if the air is clear you’ll have some spectacular views of the San Gabriels. 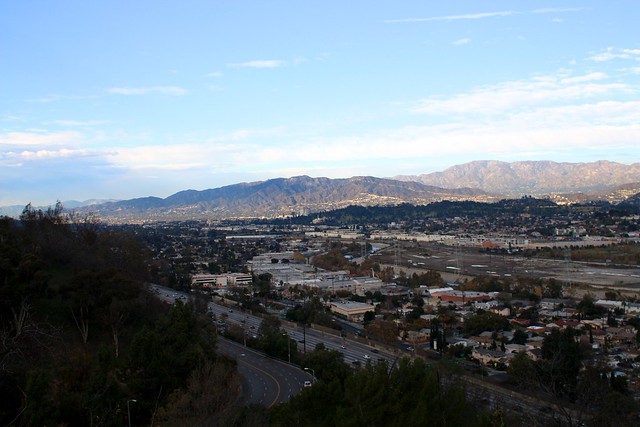 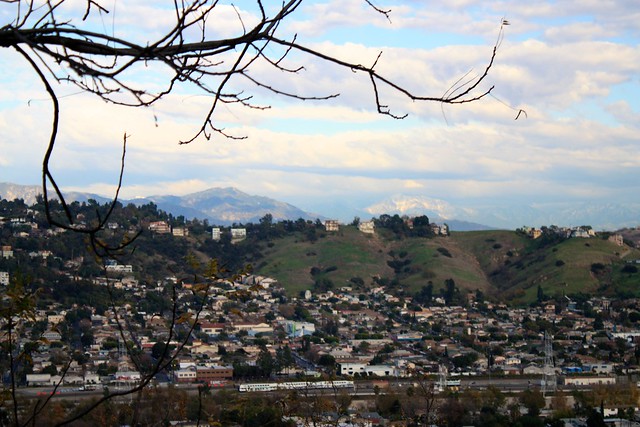 At the half-mile mark, the fairly wide path you’ve been hiking on so far seems to run off of a short ledge, leaving a rather rugged little single track in its wake. I’ll be honest – I really wasn’t expecting a trail like this to be in such an urban park, but it’s there and it’s a lot of fun to hike on. This little trail takes some fairly steep ups and downs as it heads east, still on that ledge overlooking the freeway.

Over the next half-mile, you’ll make a few small elevations gains and losses, but you’ll probably be more focused on just enjoying your time on this little-known trail. 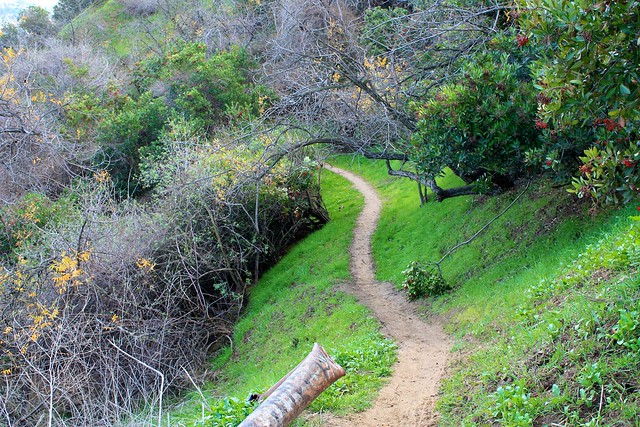 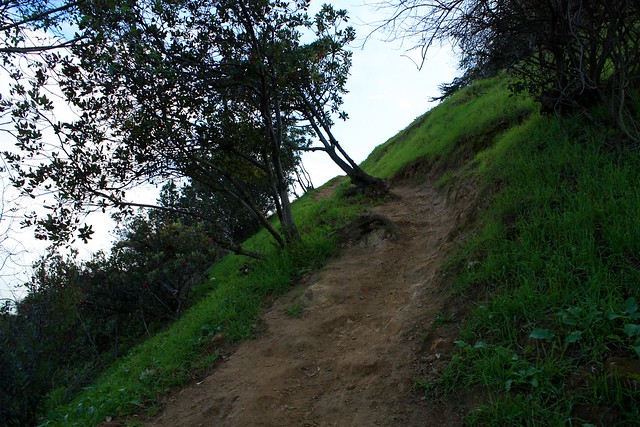 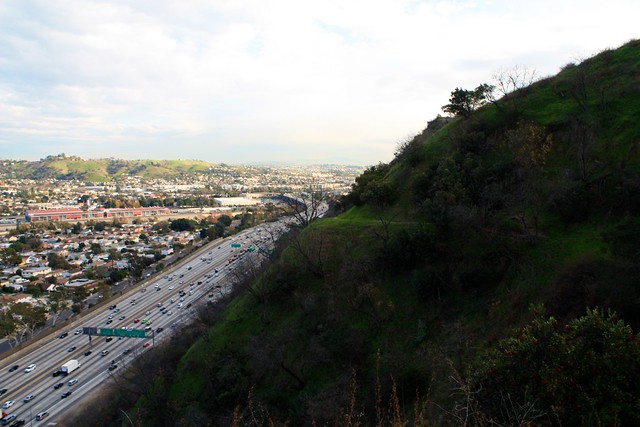 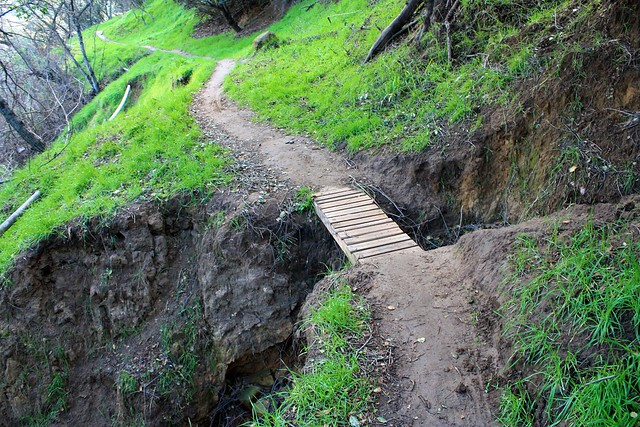 At the mile mark, the trail makes its way to the back of a large stone wall. Look for an unofficial (but well-worn) footpath leading up to the wall and take it, climbing over the wall and meeting the pavement at Angel’s Point Road. 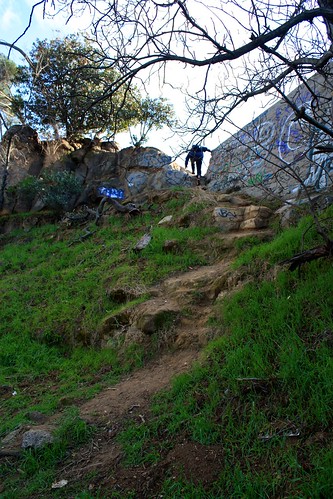 When you reach the road, you’ll want to head back west, ignoring the road on your left that descends down the hill and staying on Angel’s Point Road. While there are some use-trails that do leave the road, they are not maintained and not well-traveled enough to be defined. You’ll probably end up causing some erosion damage if you start tromping through the off-road route here, so just suck it up until the you see this gate at about the 1.2 mile mark. 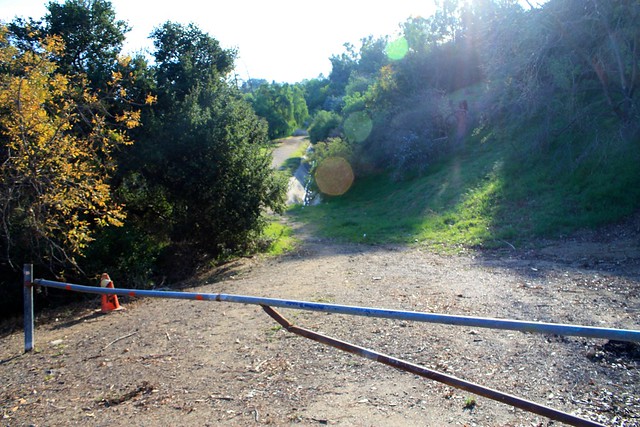 Hike along this path for a under 2/10ths of a mile as it follows the drainage route and ends up in front of some soccer fields at Elysian Heights Park. 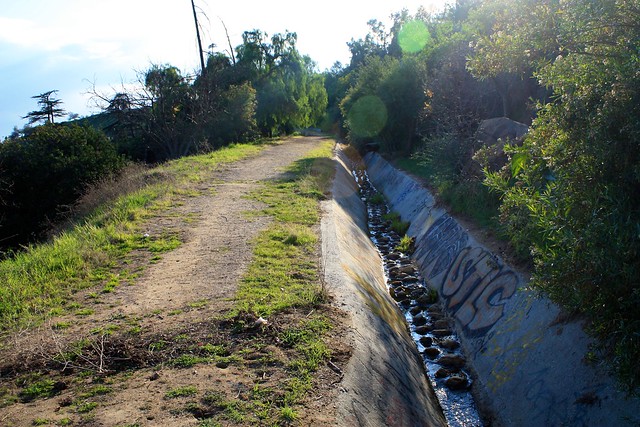 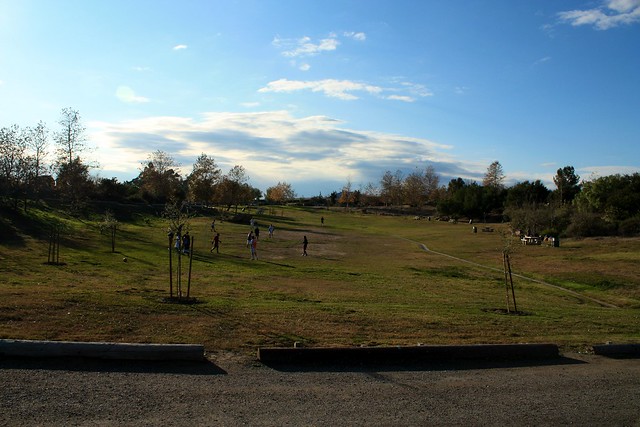 Here, the footpath abruptly ends, so you’ll have to make your way through the soccer fields to the southwest, heading toward the small pavilion at the end of Park Road. You can either cut through the soccer field or follow a small (and almost unnoticeable) footpath that hugs the south end of the summit. The footpath passes several picnic tables and avoids the playground and barbeque pits at the small parking lot at the end of the road, and also provides some pretty incredible views of downtown Los Angeles. 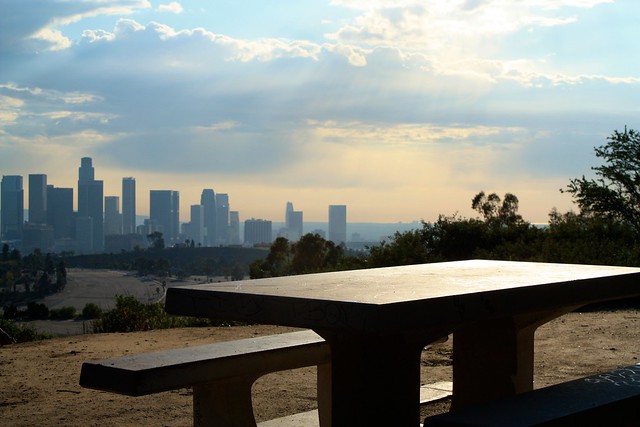 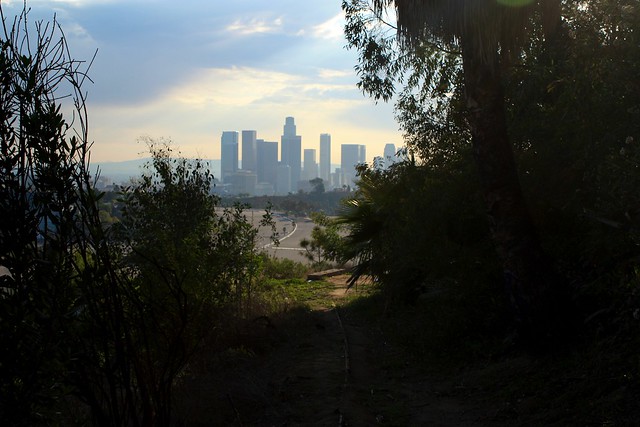 When you’ve had your fill of the skyline, head north on Park Road and take a left back onto Angel’s Point Road. There are no trails heading down into the small bowl to the west of the overlook because it’s part of the Los Angeles Police Academy – you can often hear cadets shooting guns down there, so it’s not really the safest place to be. Just stick to the road. 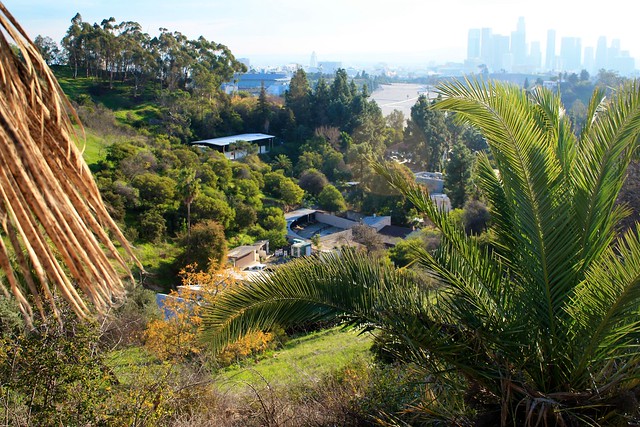 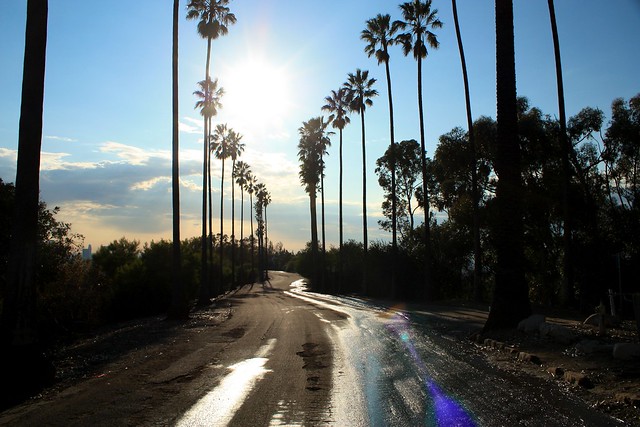 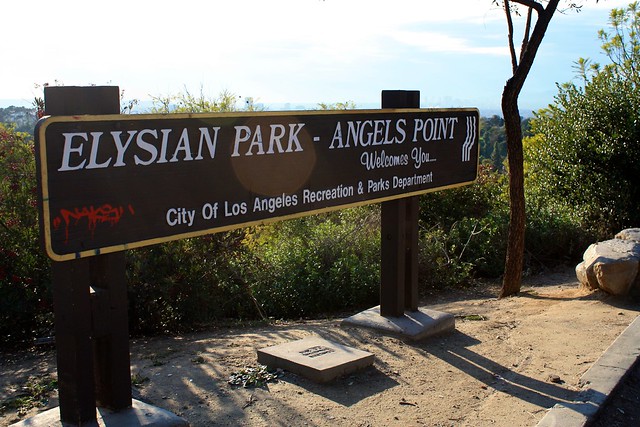 Head down this very short path to the public art sculpture at Angel’s Point. While the sculpture itself is, sadly, covered in graffiti, it’s still fun to look at – and on clear days can offer some really tremendous views in all directions.

The sculpture is by Echo Park ceramicist and sculptor Peter Shire, and stands in tribute to Grace E. Simons and her husband Frank Glass.

Simons seems like a really interesting character – she worked as a journalist before moving to China, where she met Frank while he was organizing for the Communist Party. The pair moved to Echo Park in 1939, where Simons worked as an editor at the African-American newspaper The California Eagle. In 1965, just a few years after nearby Chavez Ravine and Lookout Hill were destroyed to make way for Dodger Stadium and its enormous parking lot, Los Angeles wanted to build a new Convention Center inside Elysian Park.

Simons banded together neighborhood activists and formed the Citizens Committee to Save Elysian Park and successfully fought the convention center plans, along with later plans for oil wells, condominiums, and even an airport. After Simons and Glass died in the 1980s, the Committee continued onward and managed to prevent a football stadium from being built in the park in the 1990s.

The Echo Park Historical Society has a great page on Simons if you’re interested in learning more about this amazing voice for Los Angeles parks. 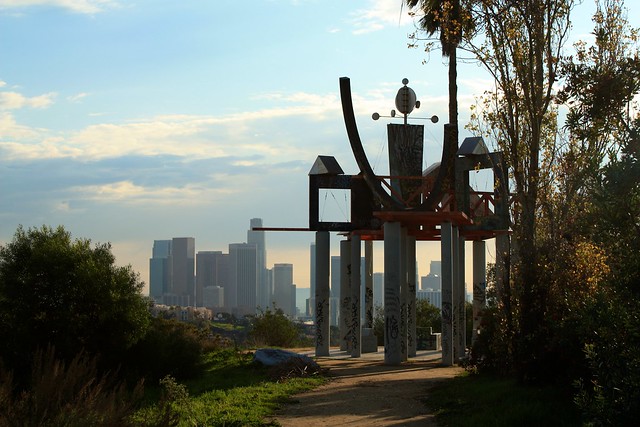 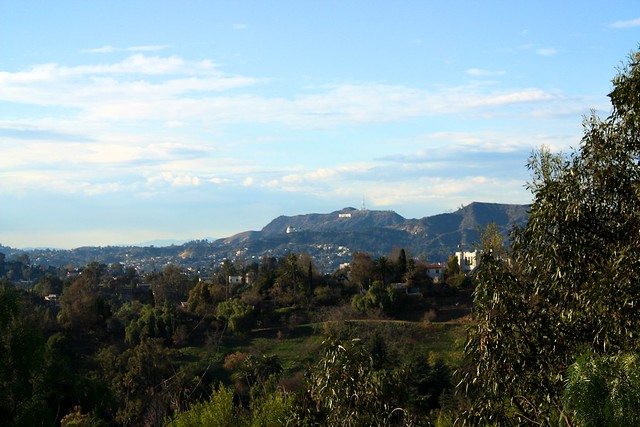 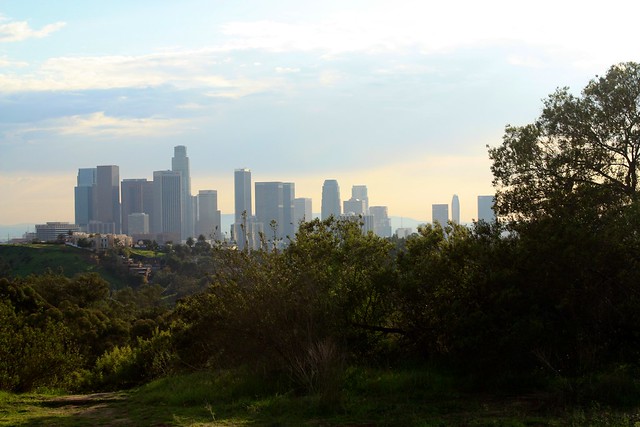 From here, return to Angel’s Point Road and turn left, following it back down to the gated trailhead.

Also, try doing this route or visiting the area during a good sunset. You won’t be disappointed: 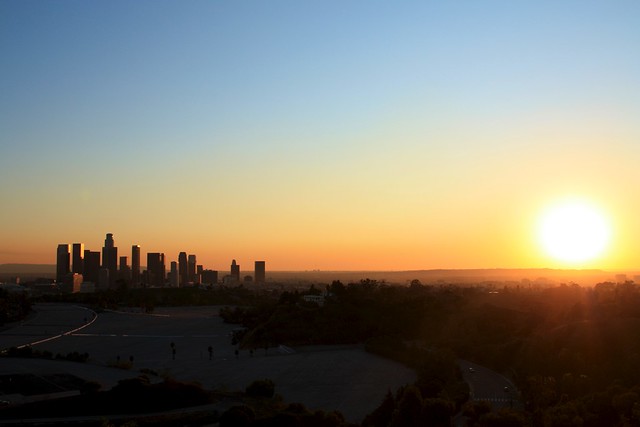 Good. The single track trail is a bit washed out in places but is otherwise easy to hike. Like many routes in Elysian Park, the trail junctions and routes are not well-signed (if marked at all), so you'll have to pay attention.

Trailhead is at the northeastern corner of Elysian Park Drive and Stadium Way. Parking is on the west side of Stadium Way or a bit farther down Chavez Ravine Road. Transit accessible with a bit of walking. Be forewarned that many of the roads shown on Google Maps in this area are closed to automobile traffic. And you probably won't want to try driving here during a Dodgers game.

Just did this trail and most of it is amazing. There are 2 parts in the single track that the hillside as eroded and the soft sand has made the trail a pretty dangerous obstacle at a steep spot. We made it across, but beware. They need to address this trail.

Just wanted to give a tip to everyone planning on this hike:
The wall you climb ("climbing over the wall and meeting the pavement at Angel’s Point Road") is probably going to look pretty gross. I completely missed it the first time because I just didn't want to look at the litter-strewn parts of the hike anymore, but that's how you get to it. By climbing up a somewhat steep hill and over trash.

I also found it hard to navigate once I got to the park/picnic area. There wasn't a clear way out, and I had to use the compass on my phone to follow the recommended path. Just a head's up.

Hiked this today & got a little lost partway through. If you want to stay on track, make sure you climb up next to the wall (back to the road) instead of continuing along the path. That little trail up to the road is not very well defined now, so make sure you're looking for it. We kept going and ended up adding a couple miles to our hike (that trail just continues to the opposite end of the park) - had fun and eventually got back on track but the trails are definitely confusing!

"...After Simons and Glass died in the 1980s, the Committee continued onward and managed to prevent a football stadium from being built in the park in the 1990s..." <--- This is simply not true. Dodgers principal owner Peter O'Malley had looked into the feasibility of building a football stadium on existing Dodger Stadium property. LA City Council politics ("if football returns to LA, it WILL return to the LA Colleseum") made it impossible at the time. It had nothing to do with a committee as you suggest.

Further, any designated trail is 100% SAFE with regard to gunfire and the LAPD Academy.

Thanks for all the info! How safe is this trail to run alone at 6am?

There are some really nice hikes near Echo Park ... and the park itself isn't too bad, either!

I'm pretty new to Echo Park; this is now my favorite out-my-front-door hike - I do it at least weekly! Never would have known it was possible if I hadn't read your description - thanks so much!