NOTE: This trail was heavily damaged by a rainstorm just before Thanksgiving, 2015. The trail appears to still be passable in the lower reaches but about a mile past Triple Falls, the Oneonta Trail has been washed out. As of February 2017, trail is very icy, but cleared of trees. While it appears you can still get to the falls, just be prepared to check trail conditions! The other falls are still very accessible.

I’m going to start this write-up by revealing a piece of shocking information: I’m a Californian, a DEVOTED Californian, who recently moved to Portland, Oregon.

While this may not seem shocking, or even interesting, to anyone who doesn’t live in the great state of Oregon, here I’m one of many Californians who have crossed state lines in search of water and a better life (or better coffee and more donuts?). In my case, I think I was in search of more trails, more biking, and more opportunities to explore new places I’ve never been. As a northern Californian I’ve also grown up thinking that nowhere could possibly be more beautiful than my home. We have picturesque coastline, redwoods, and more hippies than you could ever want. While I assumed that Portland would have much of that as well, I also thought that it would be like many big cities, requiring lots of driving to get to “the real” outdoors.

So, when I recently decided to finally get out of Portland for my very first day-hike as a new Oregon resident, I wasn’t sure what to expect. After driving for exactly 35 minutes from my apartment in southeast Portland, I pulled into the Horsetail Falls parking lot, stepped out of the car and texted my husband, “I just drove 35 minutes and now I’m standing next to a waterfall.” That is exactly why I moved to Portland. 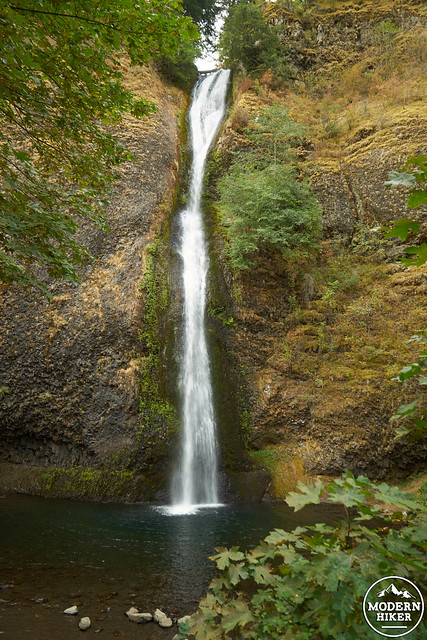 It was with excitement that I started on the Horsetail Falls Trail 438, which begins across the parking lot and next to the beautiful and likely crowded Horsetail Falls. A note about parking: The Columbia River Gorge is an incredibly popular tourist destination, and for good reason. As such, parking on a weekend can be tough, and trails can get crowded. This trail is no exception. Give yourself extra time to park, go early if you can and if possible visit on a weekday, or even during an off season time. Trust me, this trail is worth it.

On to the hike! 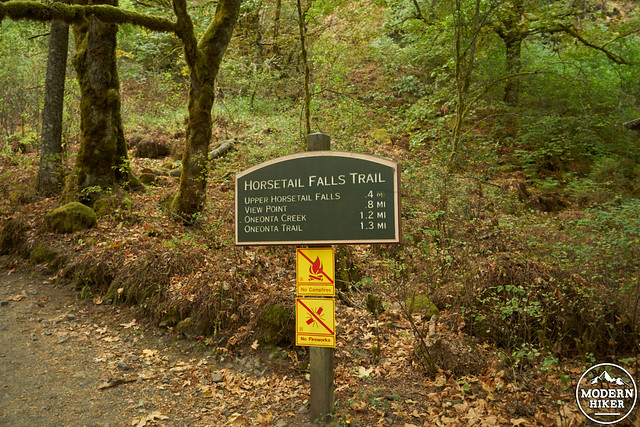 After you’ve seen enough of Horsetail Falls, you’ll find the start of the trail head directly to the left. Immediately, the trail will start to switchback up from the highway, gaining roughly 400 feet in 0.3 miles. At the intersection with the Gorge Trail, go to the right toward Upper Horsetail Falls. 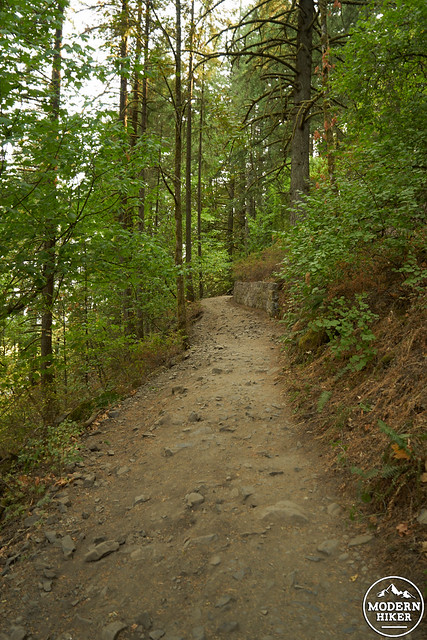 The trail proceeds inward, leaving behind some of the roadway sounds before finally reaching Upper Horsetail Falls (also known as Ponytail Falls), a picturesque 80 foot waterfall which (lucky for you) is reached by the trail following the cavern BEHIND the falls. 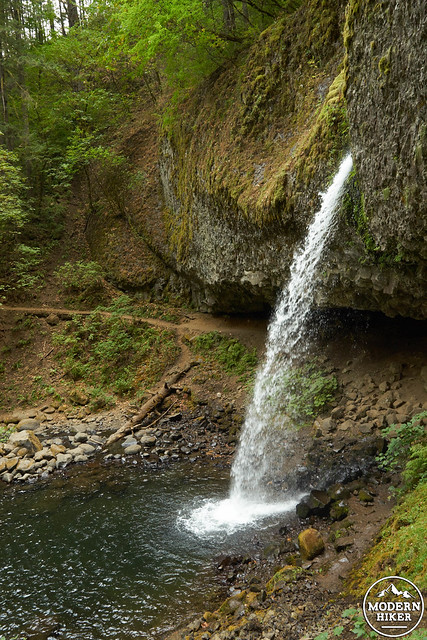 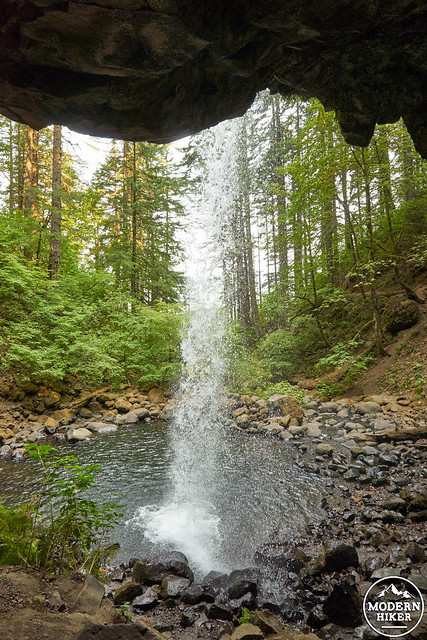 Continuing past the falls, the trail features several viewpoints looking east through the Columbia River Gorge (take extreme caution next to the cliff edge, which can be very steep). This section is fairly level and easy to travel, again following the highway for a short period of time. 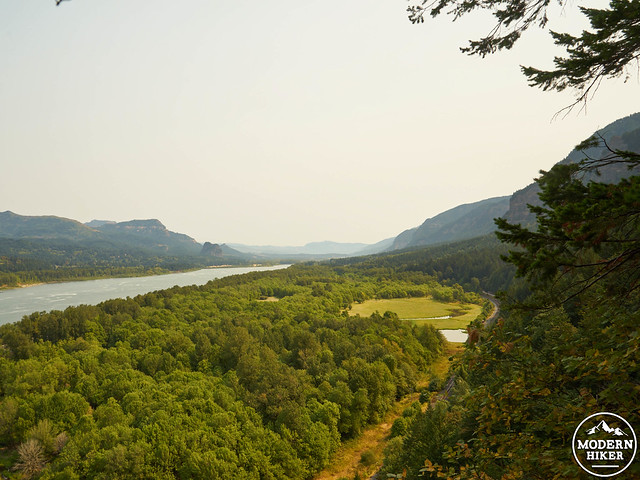 Eventually, the trail begins to gradually descend into another canyon, featuring walls of lush green moss to your left. After another few short switchbacks you’ll reach a viewpoint overlooking a 20 foot wide slot canyon of Oneonta Gorge. To your left you’ll see Middle Oneonta Falls, and to your right the creek heads to Lower Oneonta Falls, a 120 foot drop (You can’t see from this trail. However, it can be reached from a different trailhead at low water times, by a wade up Oneonta creek. Another trail for another time). 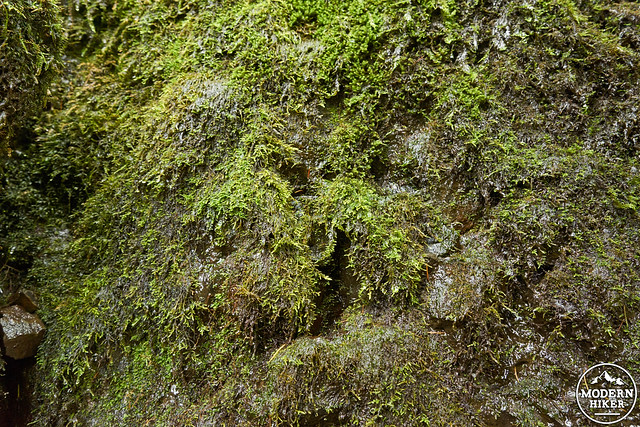 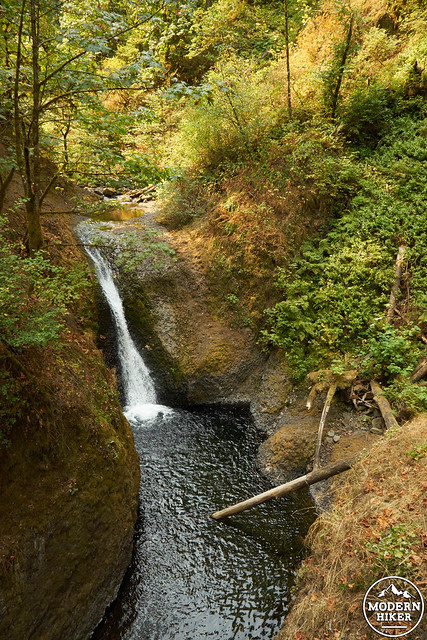 Over Oneonta Creek you’ll cross a metal footbridge. As of August 2015, the bridge IS open to hikers, but take note of the following sign, indicating that only one person should cross at a time. After leaving the bridge, the trail will again head upward, shortly reaching a junction with Oneonta Trail 424. To head to Triple Falls, you’ll head to the left. However, for a shorter loop hike, you can also head to the right, which will take you back to the road and to your car after a .25 mile road walk. 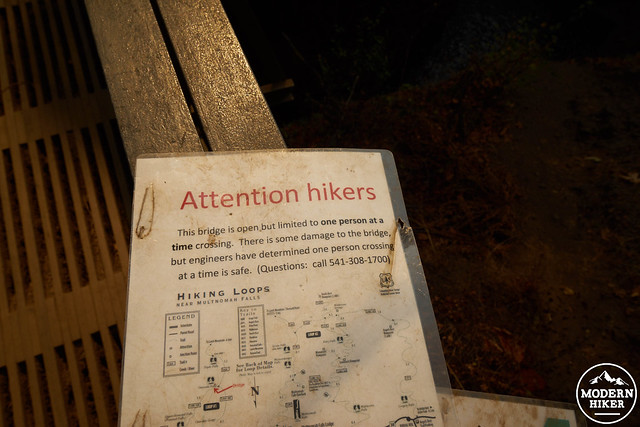 Continuing on to Triple Falls, you’ll (as you guessed) head upwards, shortly encountering an area damaged in 2014 but now reopened to hikers. For a very short section, you’ll pass through an area requiring some easy scrambling, eventually reaching a sign just up the hill indicating that the new trails heads to the right. During my visit, I was one of many visitors easily passing through this section. This is the most technical area you’ll encounter on the entire trail, which returns to a well maintained footpath shortly after. While currently open, I suggest checking on the status of the trail here. 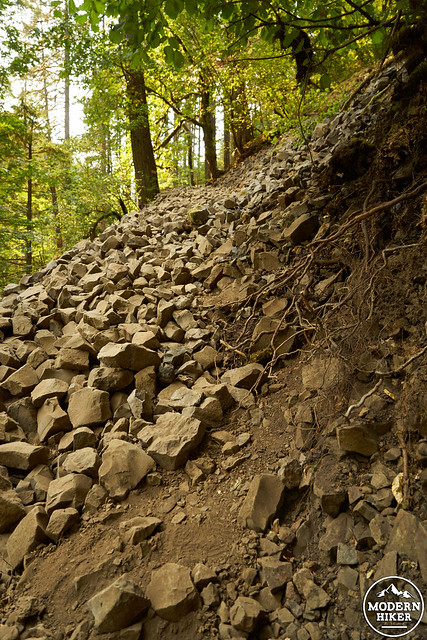 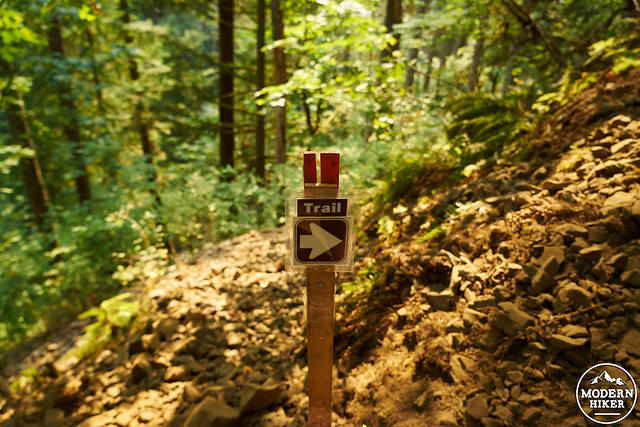 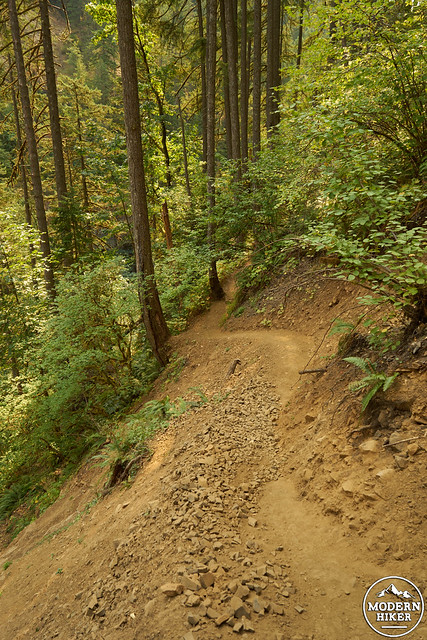 From this point, the trail to Triple Falls offers wonderful viewpoints up the canyon while gaining elevation. You’ll pass over several small foot bridges and creeks as the plant life becomes even more green and lush. After traveling for about 0.7 miles from the previous trail junction, you’ll reach Triple Falls, which can be viewed from a rocky side trail heading slightly downward to the left (you can’t miss it). At 64 feet, the three channel Triple Falls is impressive even during late summer. The main trail continues to head towards to the right, eventually crossing a large wooden bridge over the creek. 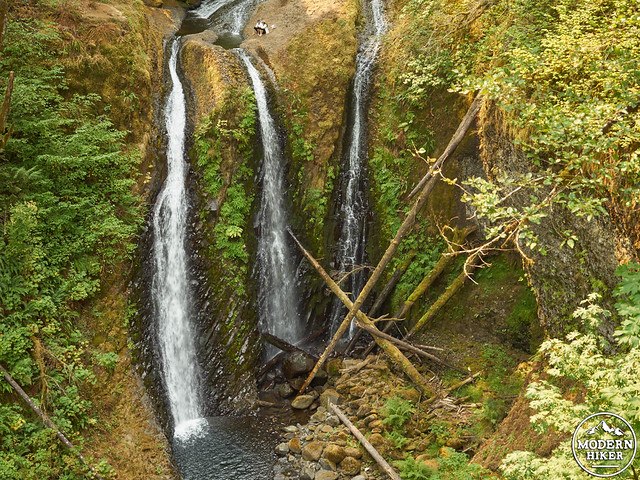 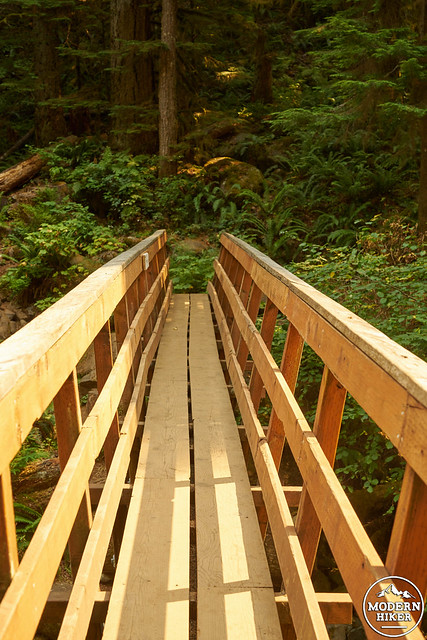 Crossing over the bridge, the trails continues to your right. This area offers numerous lunch spots along the creek to your right, both further up the trail as well as near the top of the falls. For my lunch, I found an easily accessible spot offering the perfect place to soak my feet. 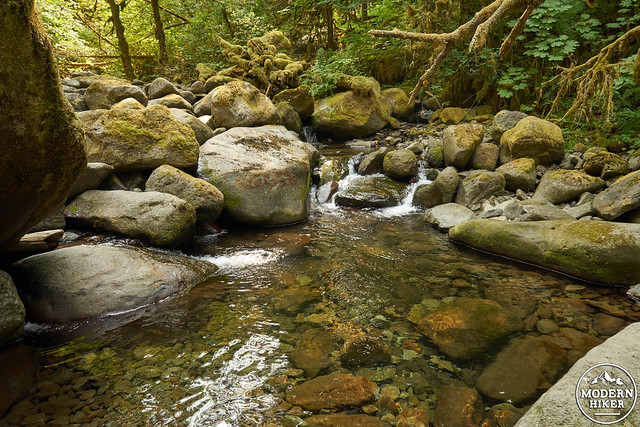 Continuing to follow the creek, and gaining even more elevation, the trail passes between even greener scenery, with prominently displayed moss gently draped over trees and rocks alike. 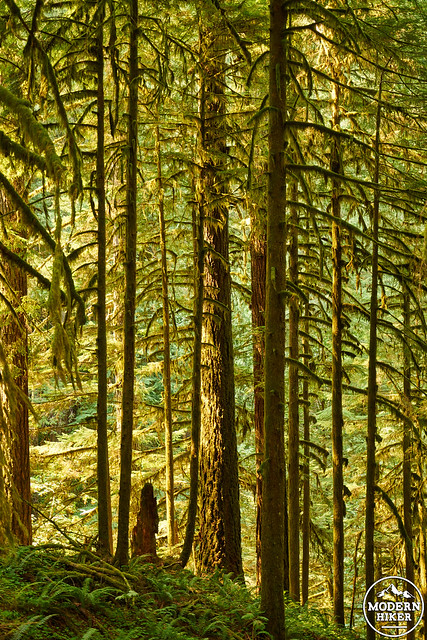 Just when you begin to wonder why I would EVER send you further past Triple Falls, you’ll reach another bridge after about 1 mile. Crossing the creek, you’ll reach your end destination: an area strewn with moss covered rocks that looks much like an unbelievable fairyland, and nothing like our parched and dry west coast. 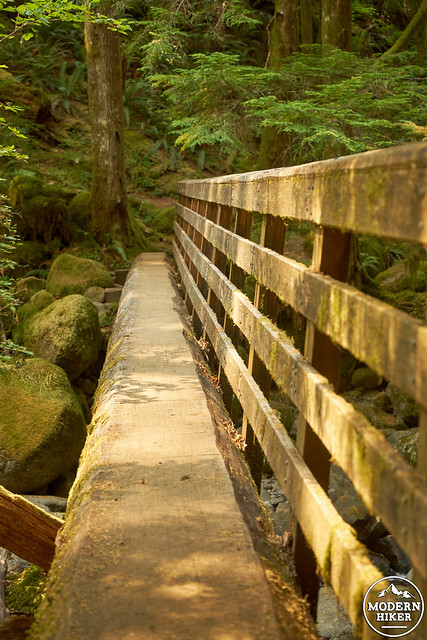 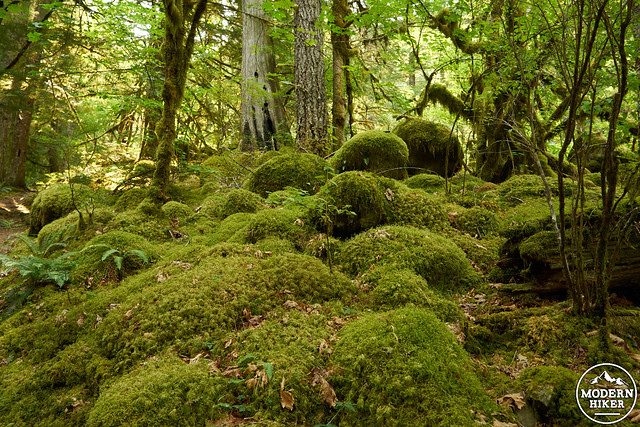 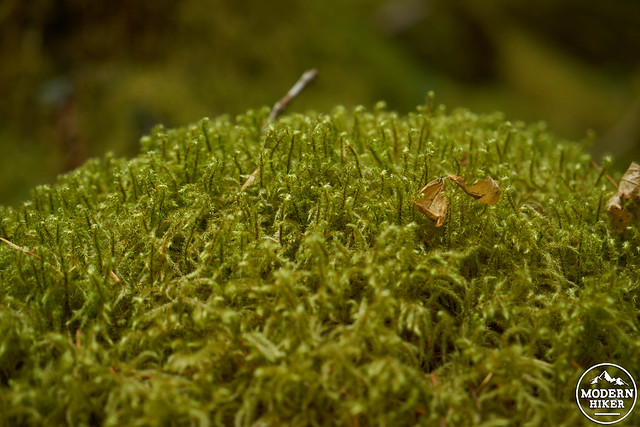 Shortly you’ll reach a signed trail junction, at which point you’ll turn around and head back the way you came, enjoying more views of lush greenery and waterfalls. 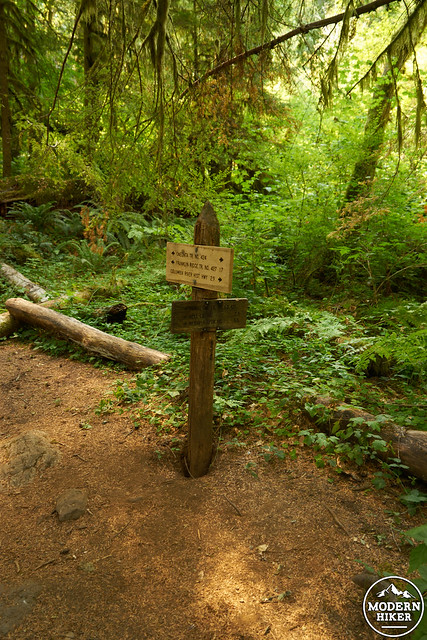 – Map: You can use the Columbia River Gorge West map from Green Trails Maps. These can be ordered online, or can usually be obtained at any local outdoor retailer.
– Numerous families were enjoying the trail with children up until Middle Oneonta Falls. This section is fairly easy to moderate, while offering great views. There is a more technical section after this.
– This is Oregon! Look at the rain forecast and plan accordingly.

There are numerous camping options available in the Columbia River Gorge on both the Oregon and Washington sides of the river. Ainsworth Campground in Ainsworth State Park is less than a mile from the trailhead, and is open from March 13 through October 31.

From Portland take I-84 East/US-30 East towards the Columbia River Gorge for approximately 30 miles. Enjoy the view! Take exit 35 towards Historic Hwy/Anisworth/State Park. After about 1.5 miles you'll see a parking lot on your right. If it's full, parking is allowed along the road on the waterfall side.