Mountains have long served as spiritual destinations for those seeking enlightenment. The pursuit of peace, solitude, and even the feeling of being elevated closer to the heavens draws people to heights near and far, from the Buddhist monasteries perched on China’s loftiest peaks to the myriad temples strung across the Himalaya. For those lacking in frequent flier miles, but seeking a mountaintop pilgrimage, there’s an option closer to home – the Tuttle Creek Ashram, a stark stone building tucked into a deep canyon in the Eastern Sierra. 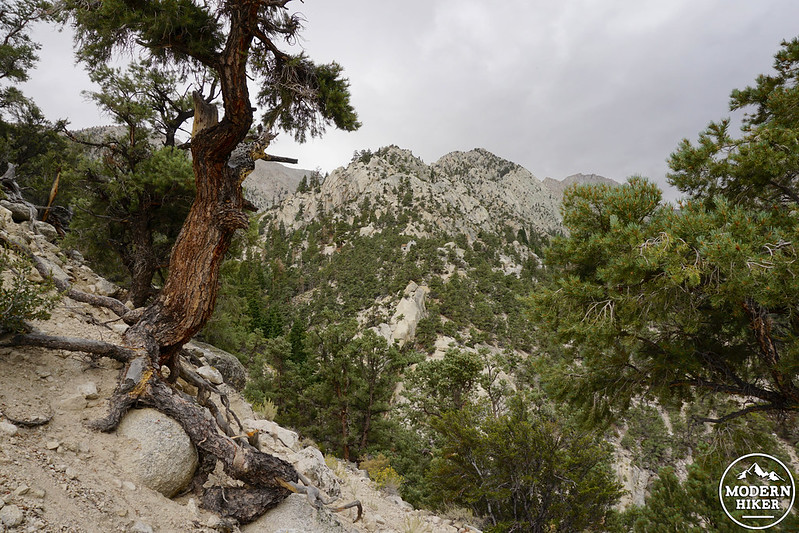 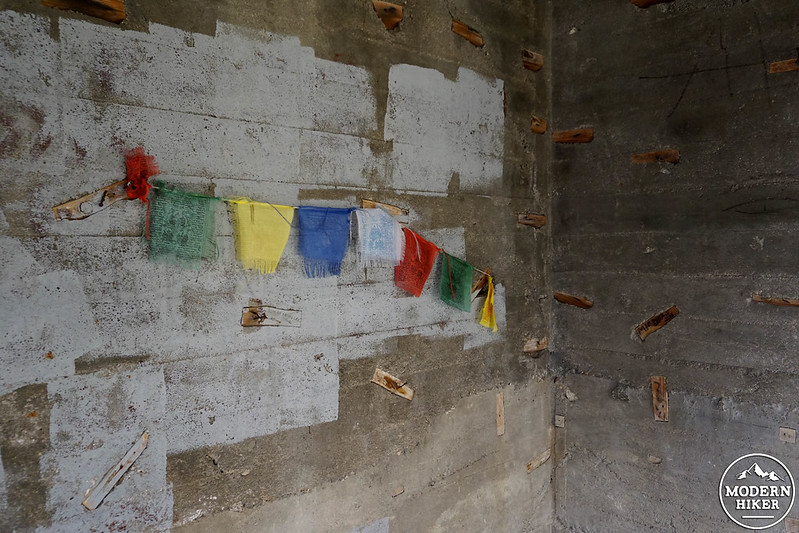 The ashram – or Monastery, Stone House, Rama Sangha School, or Ashrama, depending on the source – was built by philosopher Franklin Merrell-Wolff, his wife Sarah A. Merrell (known as “Sherifa”), a student of “esoteric Hinduism,” and their followers. The duo first visited the Lone Pine area in 1928, camping in the Owens Valley under the steep escarpments while writing an assortment of spiritual texts. They formed a bond with the mountains and sought out a location to make their connection more permanent, settling on a stunning ridge located in remote Tuttle Creek Canyon. The duo leased the land from the Forestry Service, which in turn required them to establish a structure, so they set about constructing a base camp, road, and eventually, the building itself. 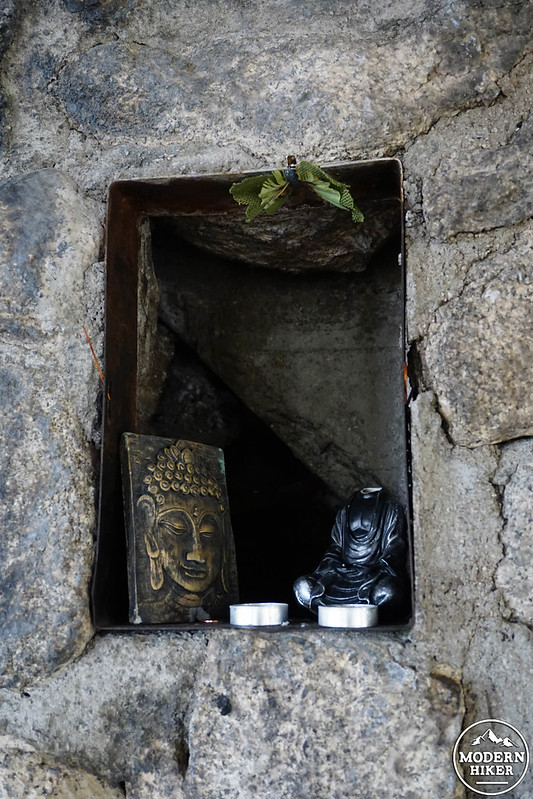 The effort required was immense. Dozens of people joined the push, with Merrell-Wolf himself leading the way with dynamite and self-constructed hand tools, and it was two decades before the crew finally ceased work on the nearly-completed ashram, only because of Sherifa’s declining health. In subsequent years, the building was vandalized and its very existence was threatened when the canyon was declared a Wilderness Area in 1963, but the Forest Service fortunately saw the significance of the building and it’s been suggested for inclusion on the National Register of Historic Places. While Merrell-Wolf and his wife are long gone of this earth, they leave behind an interesting legacy of spiritual teachings (to learn more, you can check out a short documentary called The Ashrama Man, and visit this website dedicated to their work) and of course, the ashram itself, which can be reached via a surprisingly short hike through Tuttle Creek Canyon. 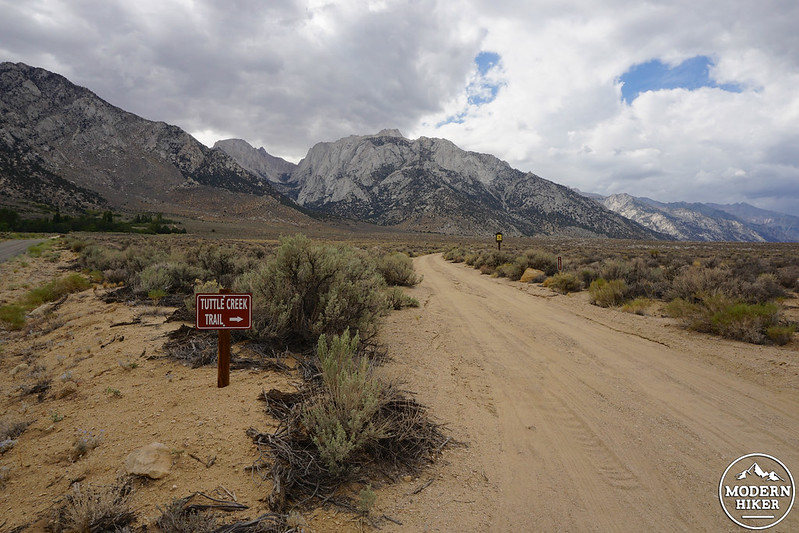 While the route is low in mileage, you’ll have to put some effort in to reach the stone building. First up is the issue of access – the trailhead is located at the end of an uneven, partially maintained dirt road that deteriorates the further you ascend; while we were able to navigate most of the road in a Honda Civic unscathed, we did witness another passenger vehicle become stuck in deep sand, ultimately requiring a tow company summons. Second is the issue of steepness – there’s a staggering amount of elevation gain involved once you step foot on sand, so be sure your legs and lungs are up to the task. 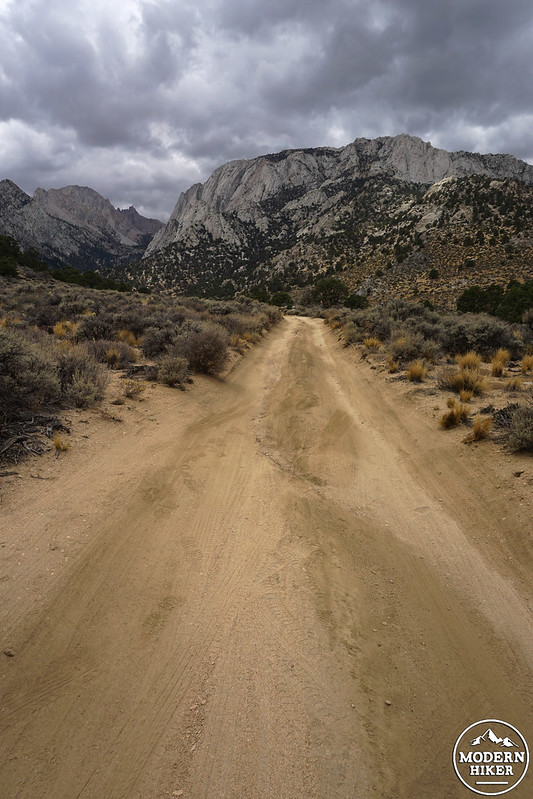 If you’re comfortable with all of this, your hike starts at the mouth of gorgeous Tuttle Creek Canyon, a lush gash in the mountains flanked by steep granite and located high above the hot desert floor. Assuming you’re parked at the “lower” parking area described in the driving directions above, you’ll begin by heading straight up the wide dirt road (16S01) which becomes exponentially more rutted, sandy, and steep the moment you pass the pullout – if you’re brave enough to attempt driving to the “upper” parking area, be sure your vehicle is equipped with 4WD and deliriously high clearance. 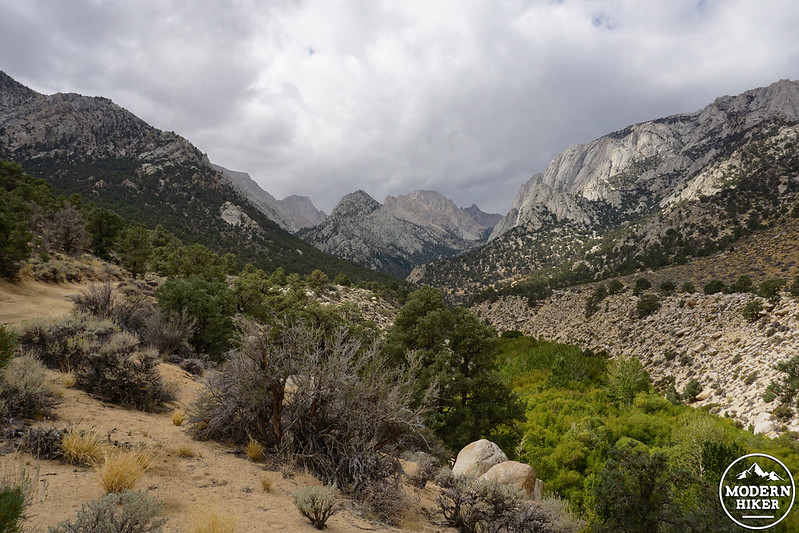 As you begin heading west into the canyon, your path is lined with sage, rabbitbrush, and piñon pines, and you’ll hear Tuttle Creek gurgling down below to your right, hidden by a vibrant green swath of foliage. Moving deeper into the mountains, you’ll reach the “upper” parking area at 0.7 mile. Here, you’ll earn your first views of the ashram if you know where to look – directly straight ahead of you to the west, perched impossibly high above, disguised by surrounding granite and greenery, the ashram is all but invisible upon first glance. Once you spot the tiny building, a mere speck on the distant ridgeline, you’ll wonder how it can be only one mile more ahead! 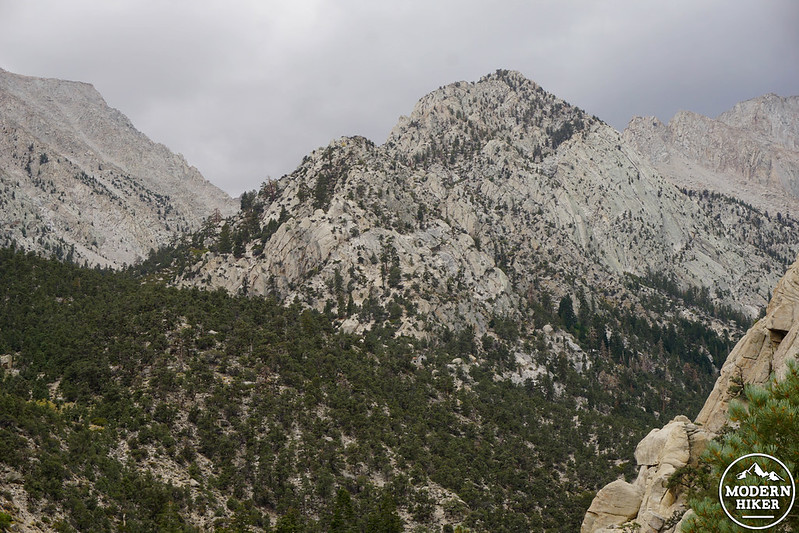 Once you’ve come to terms with the fact that you still have a whole lot of uphill to cover in a very short distance, hang a left to begin the actual Tuttle Creek Trail – now a single track – just past the small brown John Muir Wilderness boundary marker. The incline here is no joke – trekking poles may come in handy both on the way up for momentum, and on the way down to cushion the shock on your poor knees. As you climb up, make sure you glance back occasionally towards the east to see the Owens Valley and Inyo Mountains open up behind you. 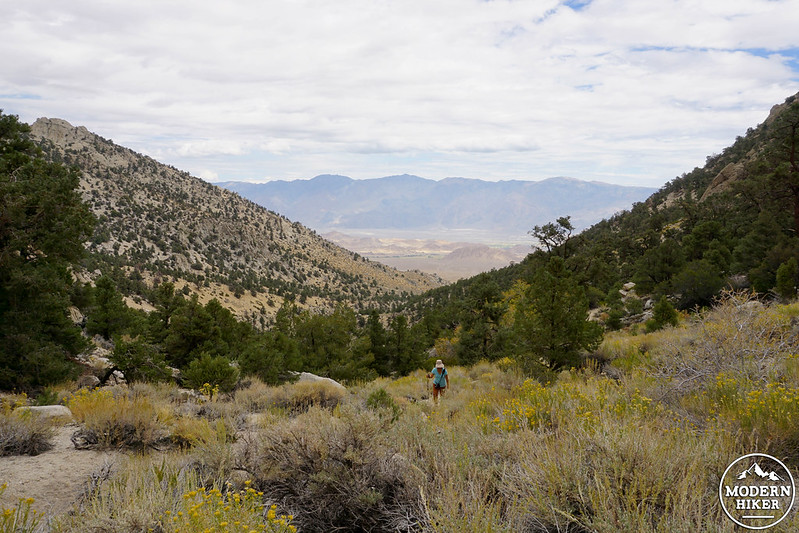 At about 1.3 miles from the “lower” parking area, you’ll earn better views of the ashram as the trail turns southward. Tuttle Creek once again rushes beneath you, and the canyon suddenly begins to sprout a colony of beautiful green firs – it might be difficult to recall that you began your hike not too long ago on a bed of hot, sage-lined sand. After a thin, crumbling section of trail, you’ll plunge into a vibrant, moist gully at 1.5 miles and cross Tuttle Creek over an assortment of stones, logs, and a tiny wooden bridge. Once on the other side, it’s only 0.2 mile further to reach the stone building, a 2000-square foot building set in the shape of a cross symbolizing “the principle of equilibrium,” important to Merrell-Wolf and his adherents. 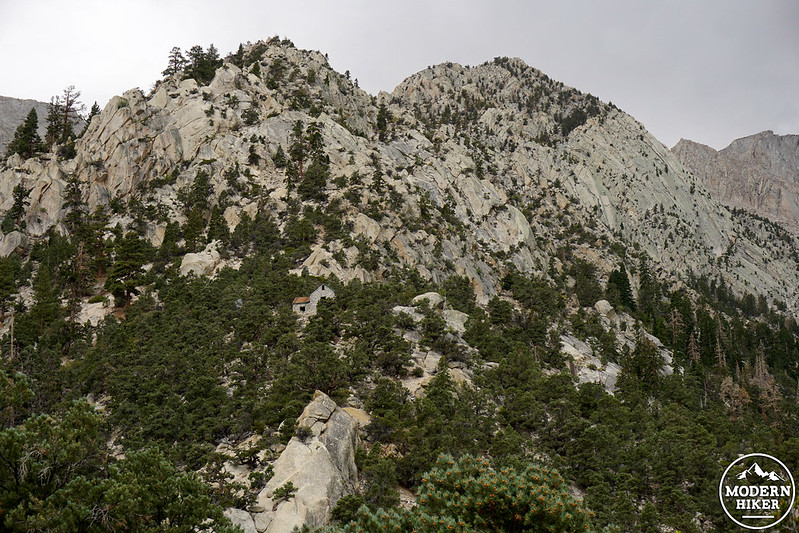 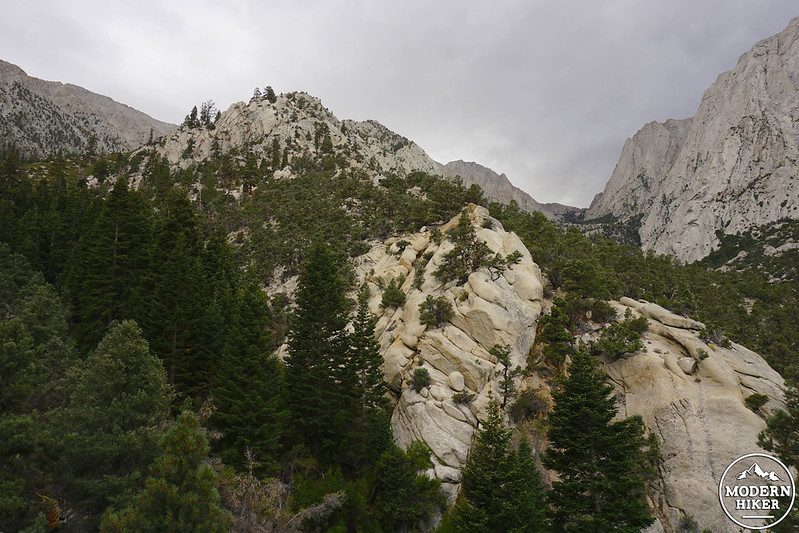 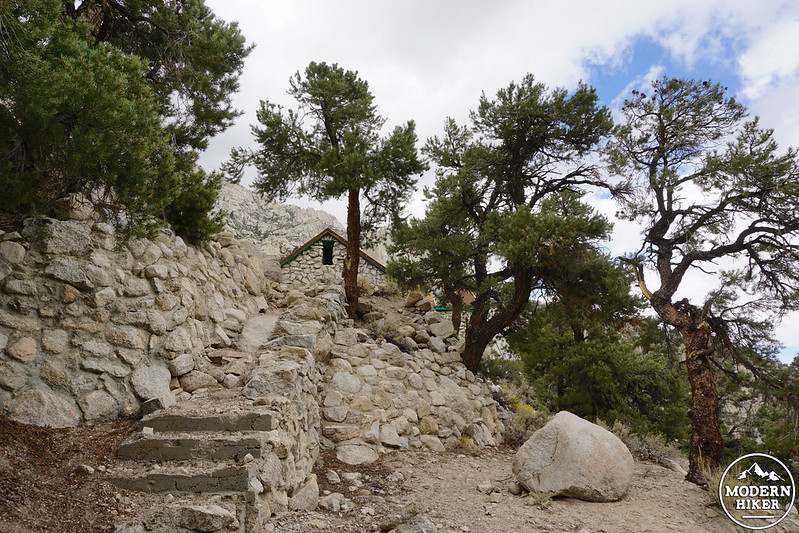 You can choose to ascend a deteriorating stone staircase or continue a minute further on the trail to find access to the ashram. While the inside contains no more than cool stone walls and assorted spiritual artifacts left by visitors, I think the building’s power comes from the realization that a group of people spent twenty years of their lives on this effort, a labor of love and testament to mankind’s perpetual quest for enlightenment and inner peace. One look through the ashram’s plentiful windows, framing absolutely exquisite views, and you immediately understand why Merrell-Wolf and his wife – and everyone who’s since made the trek – felt such a draw to this beautiful place. 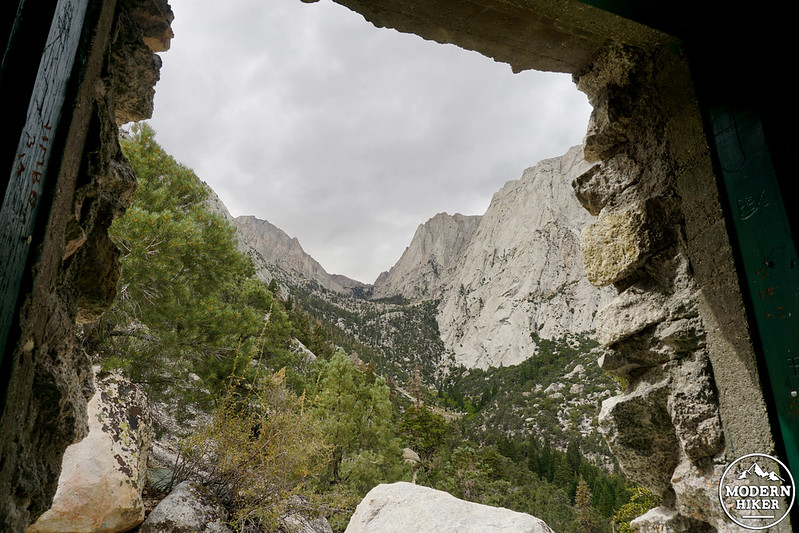 When you’re ready to take leave, simply retrace your steps to head back. To respect the magic and serenity of this mountaintop retreat, make sure you truly leave only footprints and take only memories…and if you find that connection so many have sought, you may come away with something much more deep. 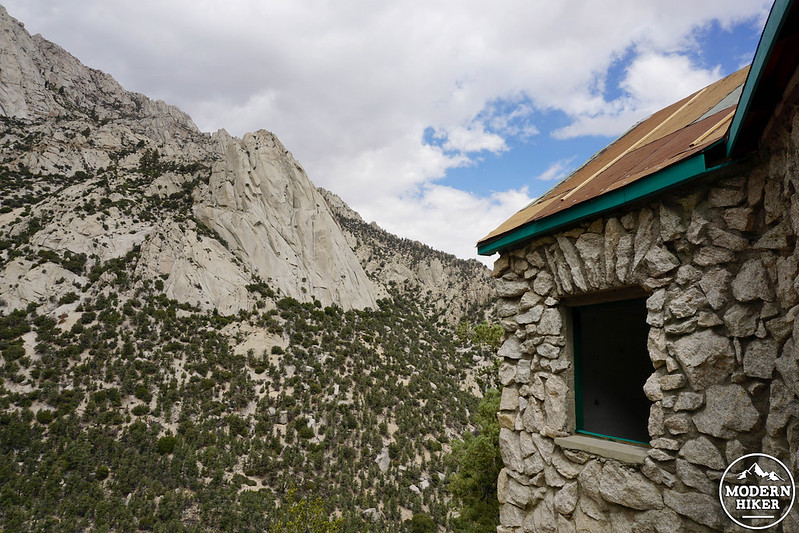 The BLM's Tuttle Creek Campground is located a short distance away from the trailhead; backpacking opportunities exist if you obtain a wilderness permit.

From Lone Pine, head north on Whitney Portal Rd for 3 miles and turn left on Horseshoe Meadow Rd for 2.1 miles. Turn right onto Granite View Rd. and travel about 2.4 miles until you reach dirt National Forest Road 16S01 on your right (signed Tuttle Creek Trail). 4WD, high-clearance is recommended here but *cautious* navigation is possible with a passenger car. About 1.8 miles in, park at an obvious dirt pullout to the right.

Thanks for the heads up, Ken. Is this due to erosion / maintenance or is the road blocked now?

You can no longer drive to the Upper Parking lot.