As far was waterfalls go, the 75 foot tall (23m) Athabasca Falls wouldn’t win any medals for height, but what it lacks in stature it more than makes up for in raw power. A phenomenal amount of water tumbles down this cascade, made narrower (and therefore more forceful) by the surrounding hard quartzite rocks. A series of short and easy pathways take visitors along these impressive cascades and up close to the roaring falls themselves. Don’t be put off by crowds at the parking lot — although this is a popular spot for shutterbugs, there are also plenty of chances to get away from the snapping throngs.

The Athabasca River runs some 765 miles (1231km) from the Columbia Icefield in Jasper National Park northeast to Lake Athabasca in northern Alberta and Saskatchewan. Unlike many rivers (or just maybe the rivers I’ve been used to seeing in the significantly drier American Southwest), the Athabasca wastes almost no time in getting going.

Athabasca Falls is relatively close to the headwaters of the river, and taking this short, scenic walk to the cascades will go a long way in reminding you of the sheer power of water in the midst of a beautiful, pine-filled forest. 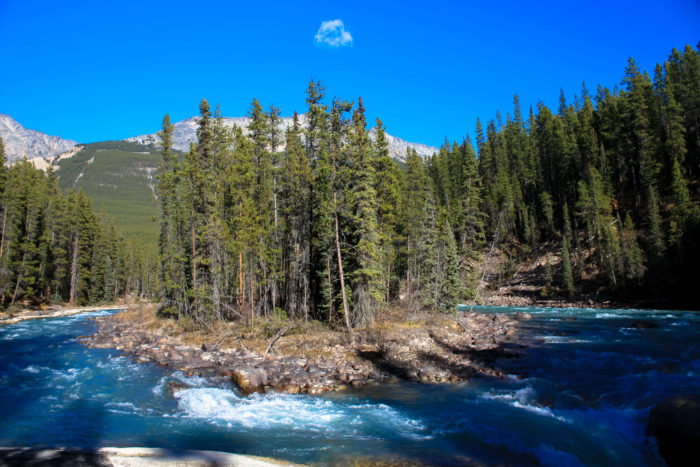 Begin your hike heading south from the ample parking area, then follow the paved footpath to the west as it wraps around the north side of the falls themselves. You’ll get some views of the cascade (and you’ll be able to hear it quite clearly!) almost immediately, but better views await just a bit further along. 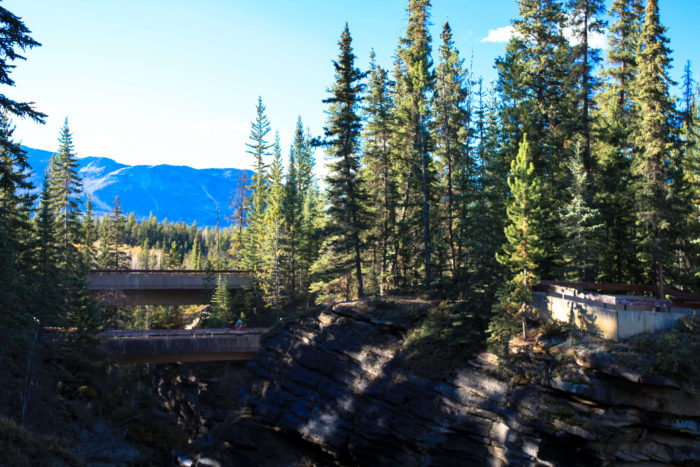 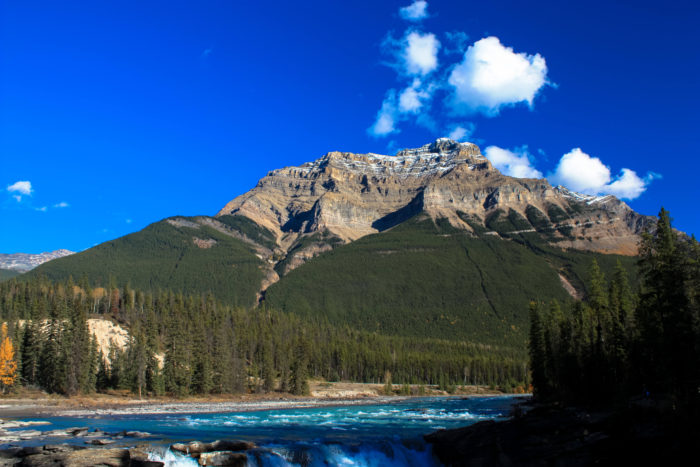 Cross the river on a narrow pedestrian walkway and you’ll see the region’s geology on display — to the southeast, Mount Kerkeslin looms above the wide floodplain. The Athabasca River flows broadly toward you before being forced into a narrow canyon of hard quartzite (which you’re walking above). Keen eyes will be able to spot the numerous potholes and other odd formations caused by the falls’ erosion on the tough quartzite and the softer limestone below it.

For now, ignore the trail that descends along the river canyon and continue on the shaded path through the woods to a dramatic overlook on the south side of the falls. When you’ve soaked it all in (figuratively, not literally — note the signs that warn of frequent injuries and deaths when people try to scale these fences), backtrack to the narrow path that descends to the west. 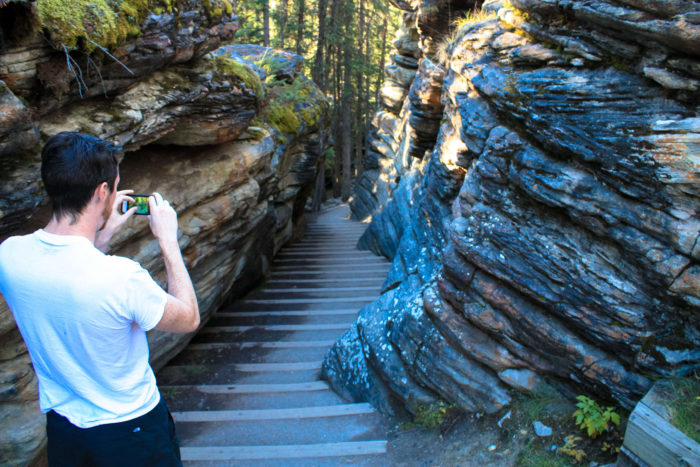 Follow this and you’ll drop below 93A through millions of years’ worth of rock layers. There are two more overlooks of the River below the falls, as well as an access route to the water itself that’s used by rafting and kayaking outfitters in the summer months.

Here at the bottom of the falls, it’s kind of shocking to see how different the water behaves — freed from its quartzite confines, the river becomes broad, gentle, and peaceful. Enjoy this quiet (and, most likely, solitude from the camera-carrying crowd above you) and return back to the trailhead the way you came in. 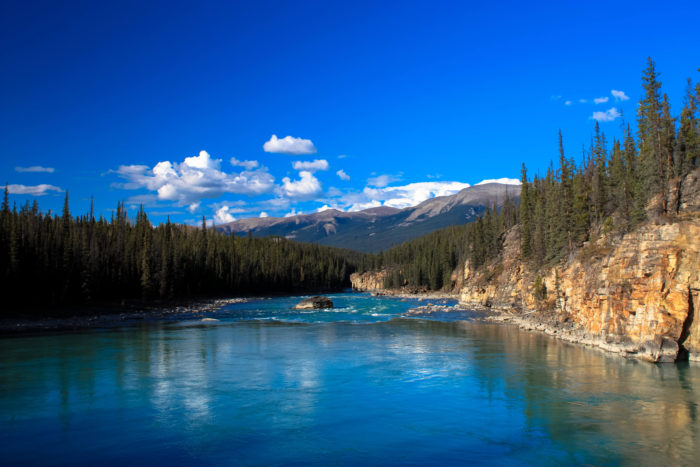 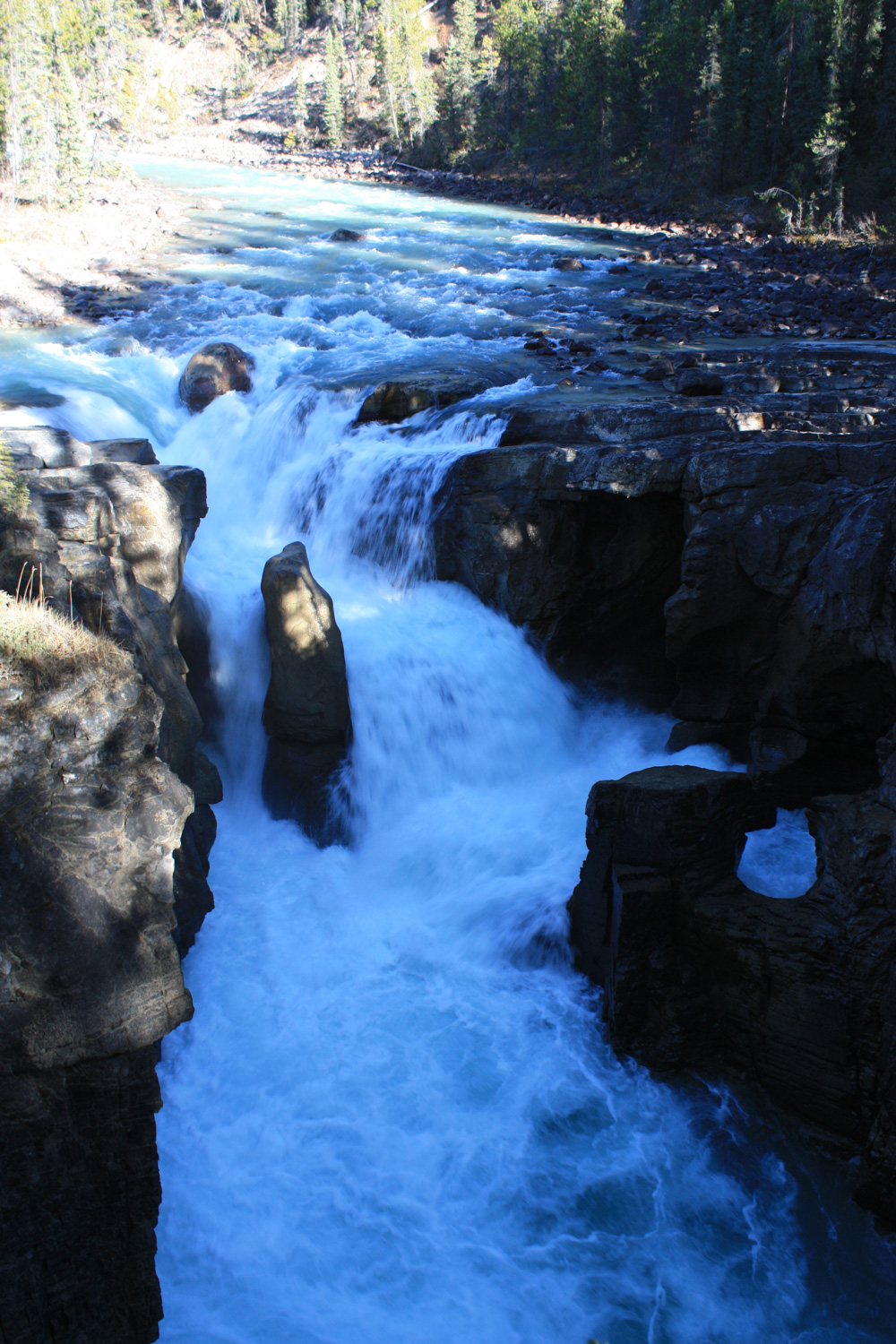 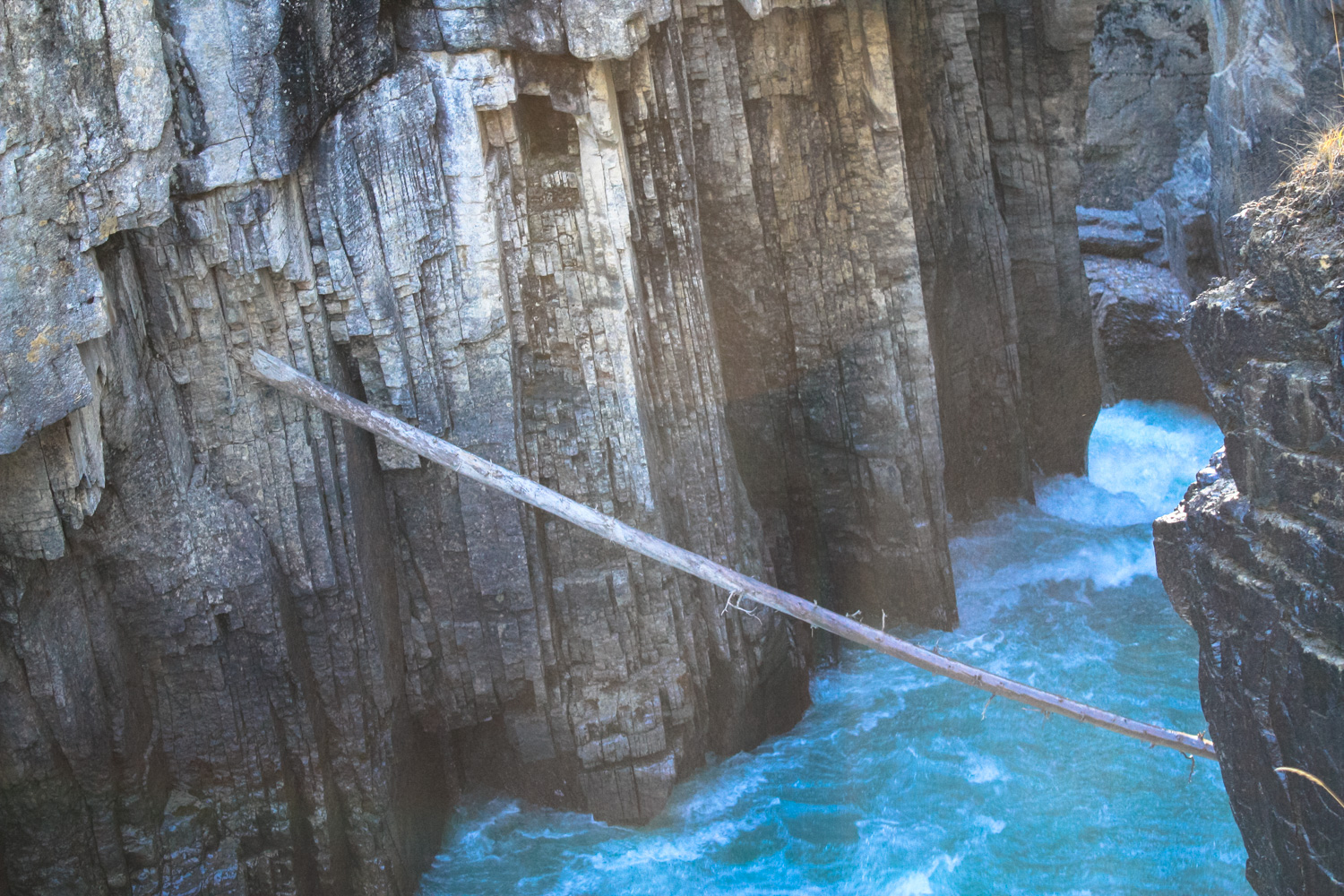 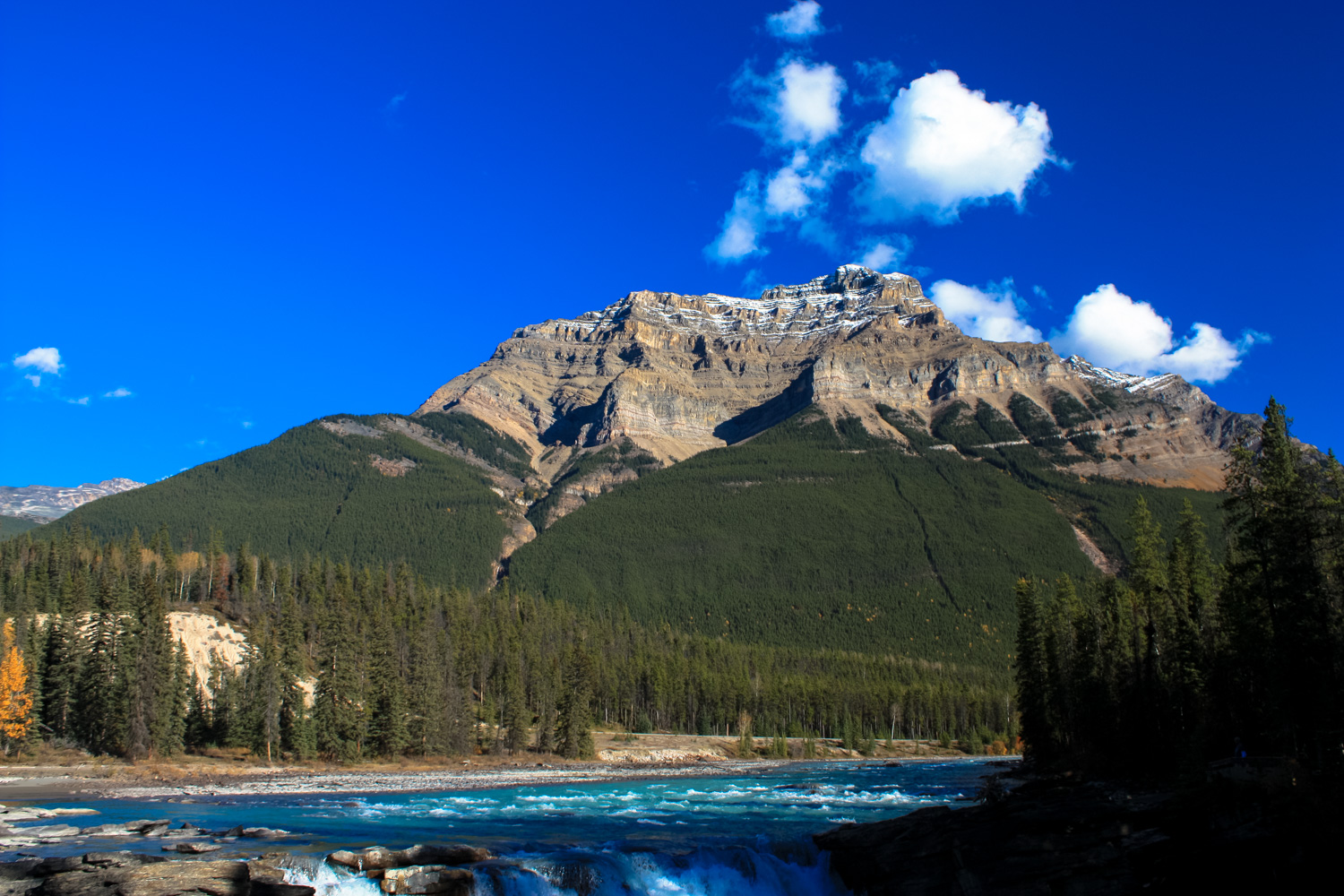 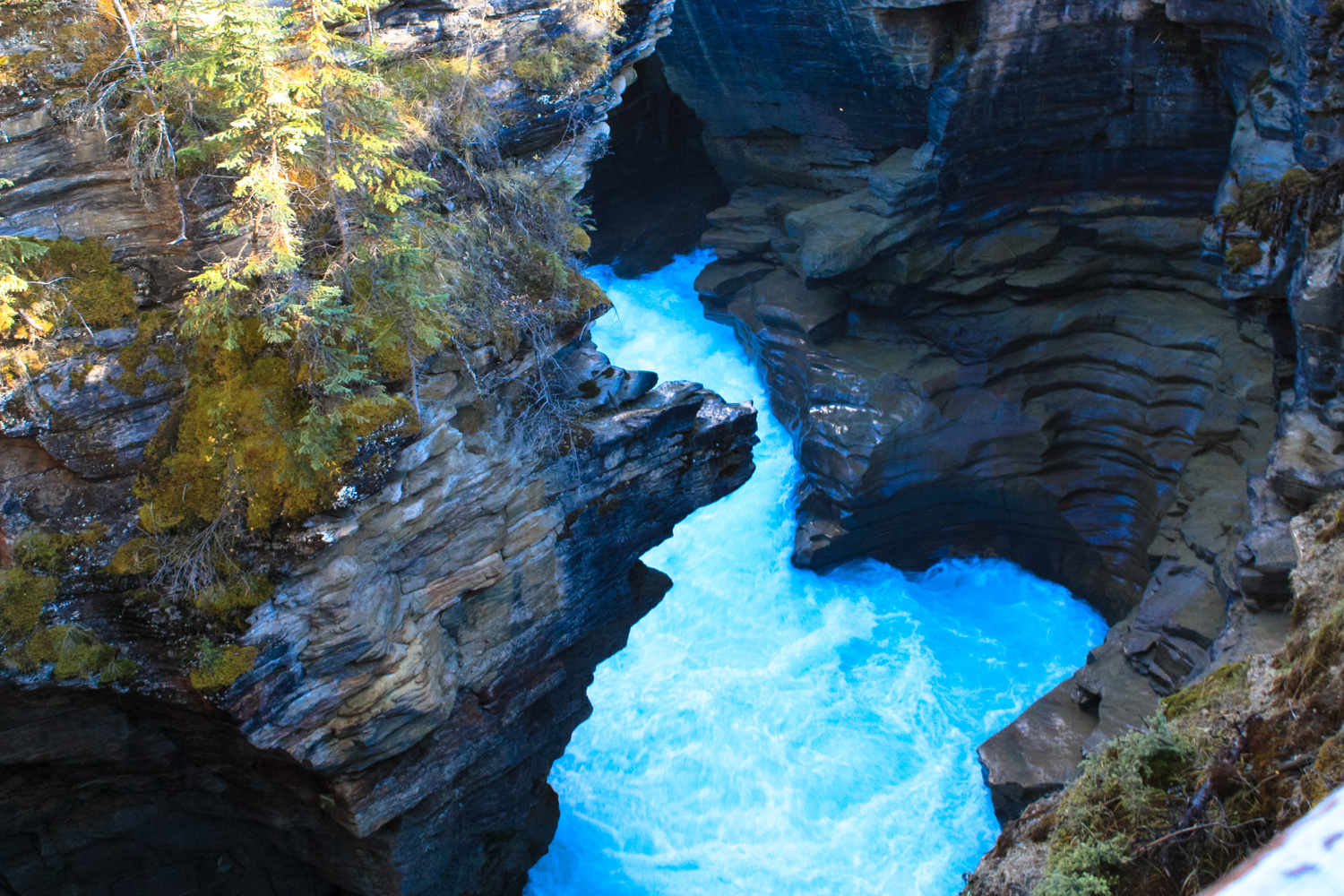 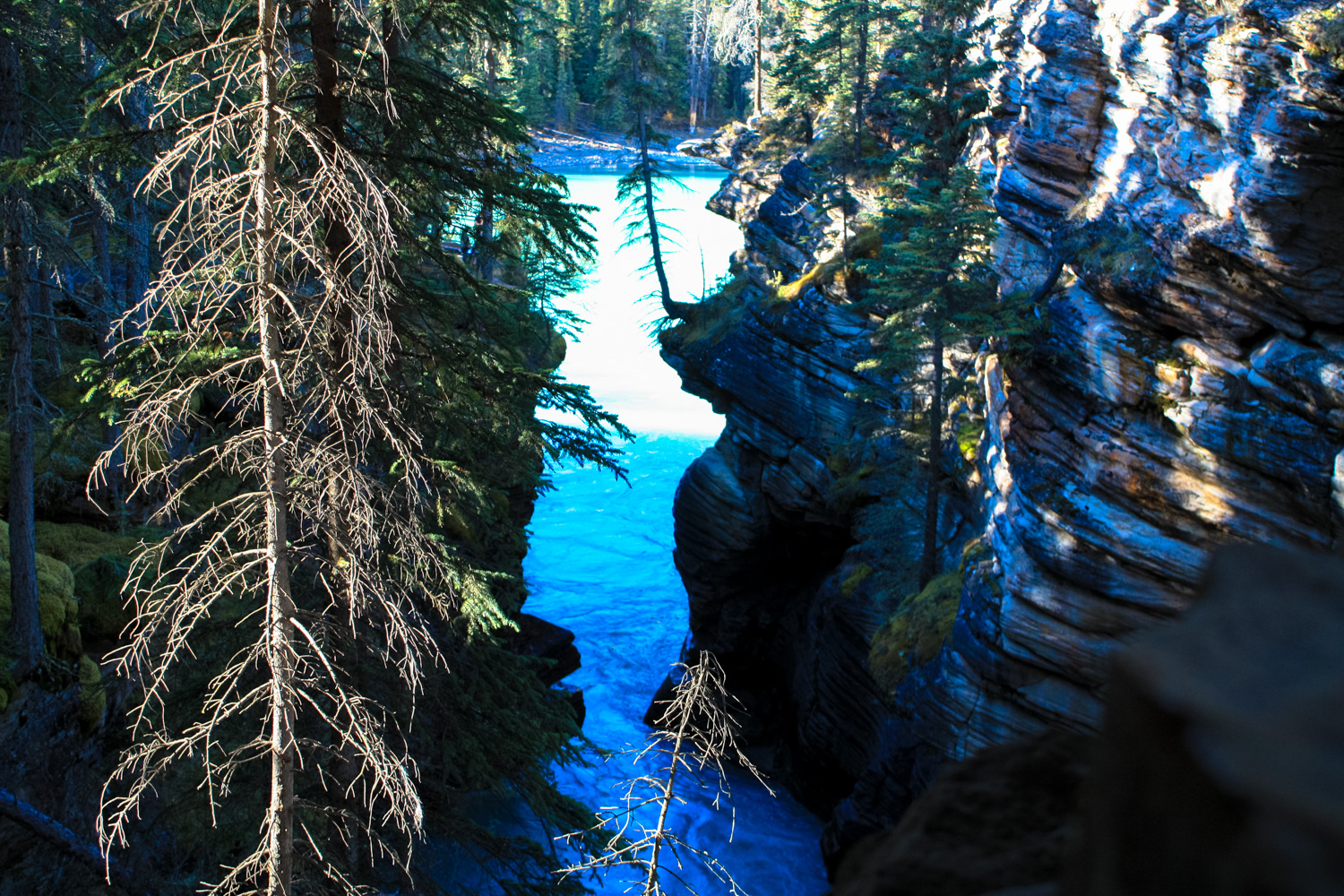 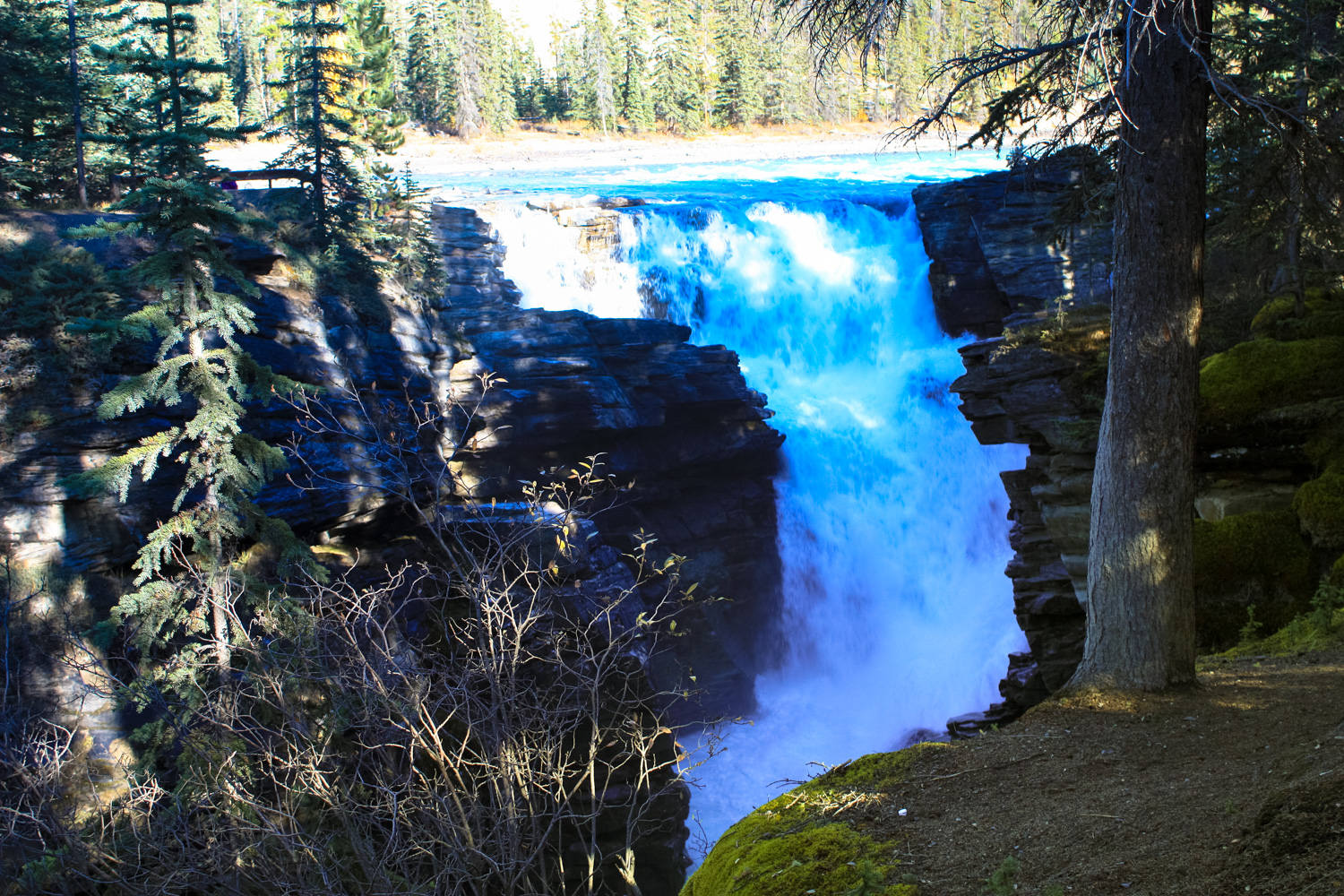 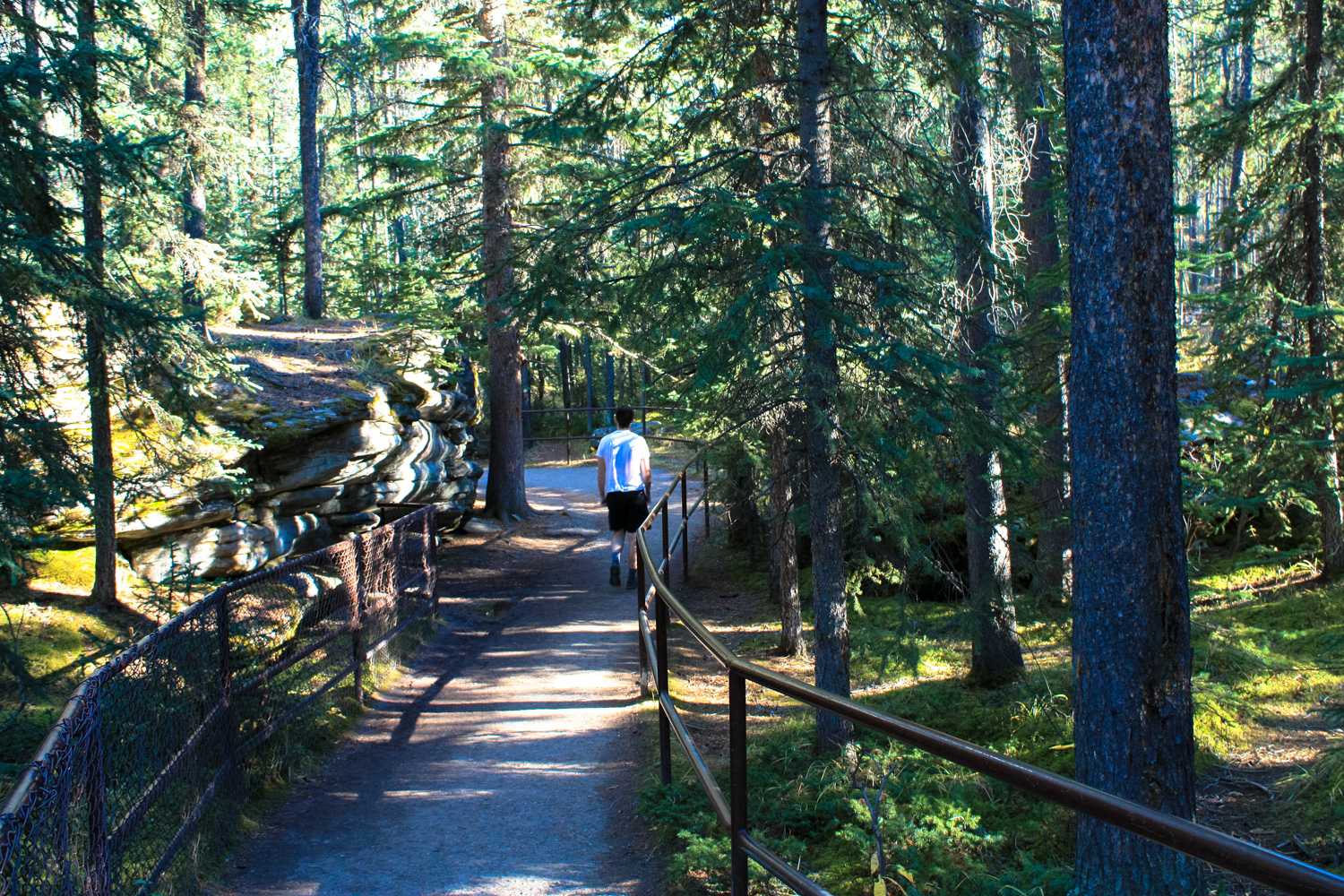 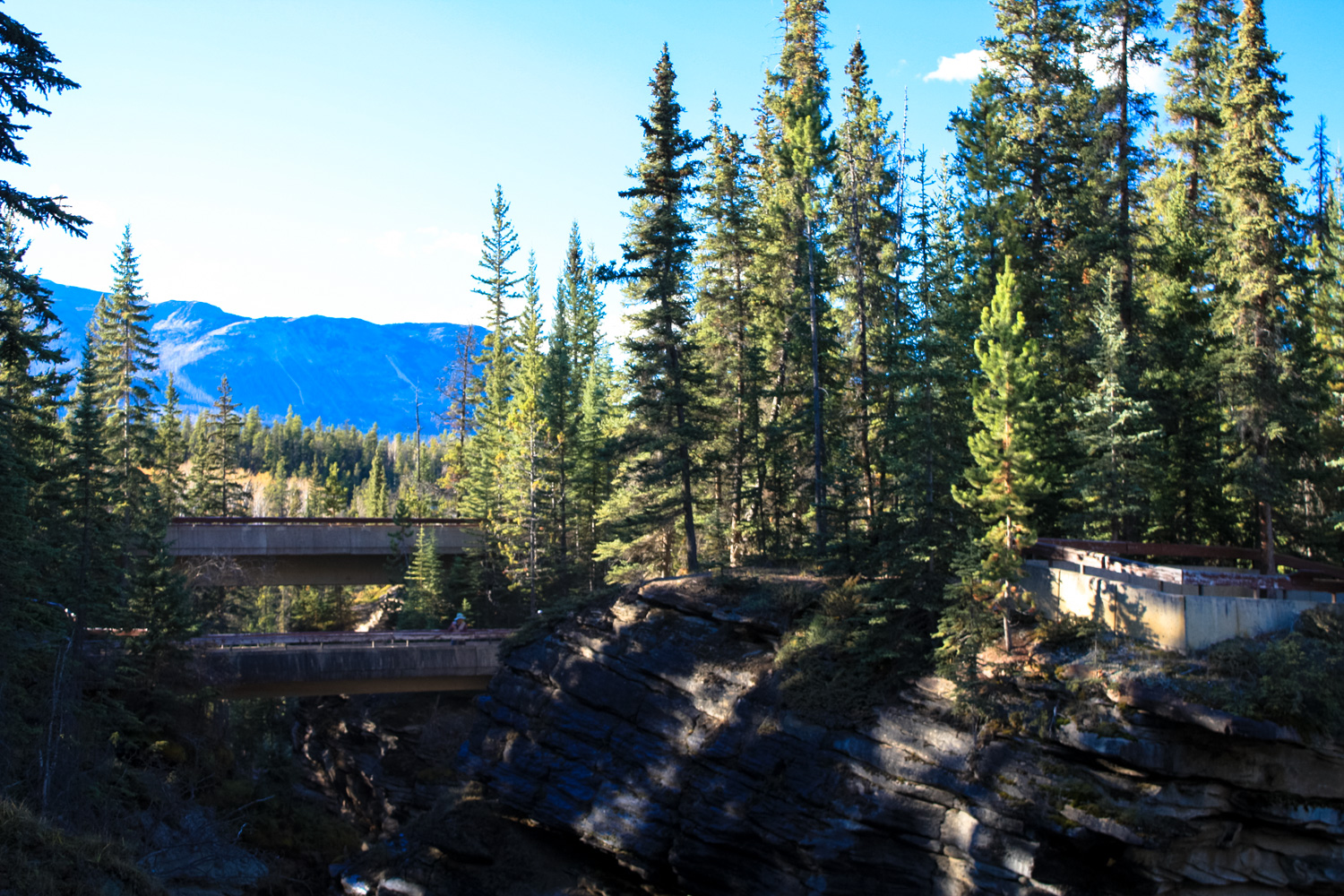 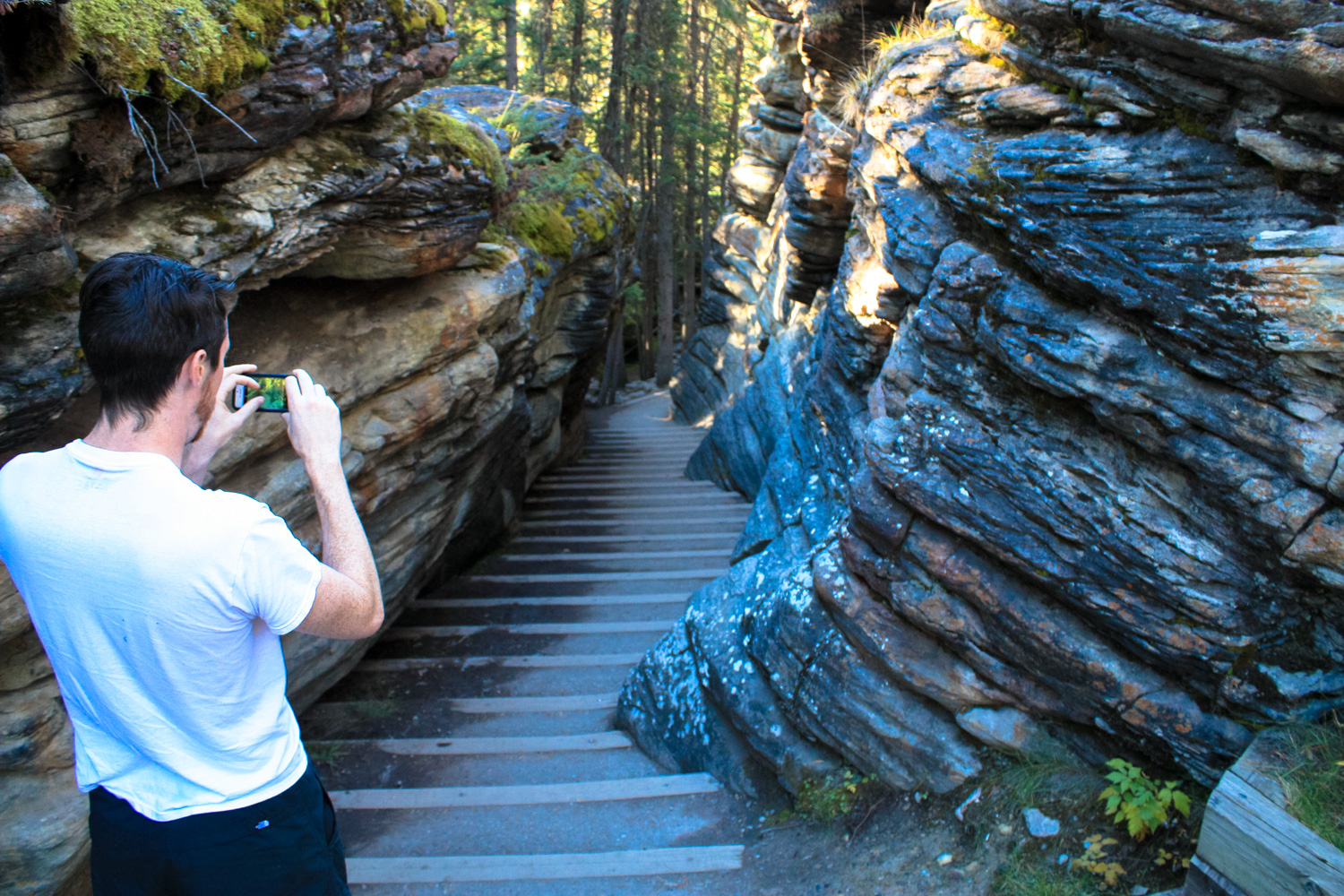 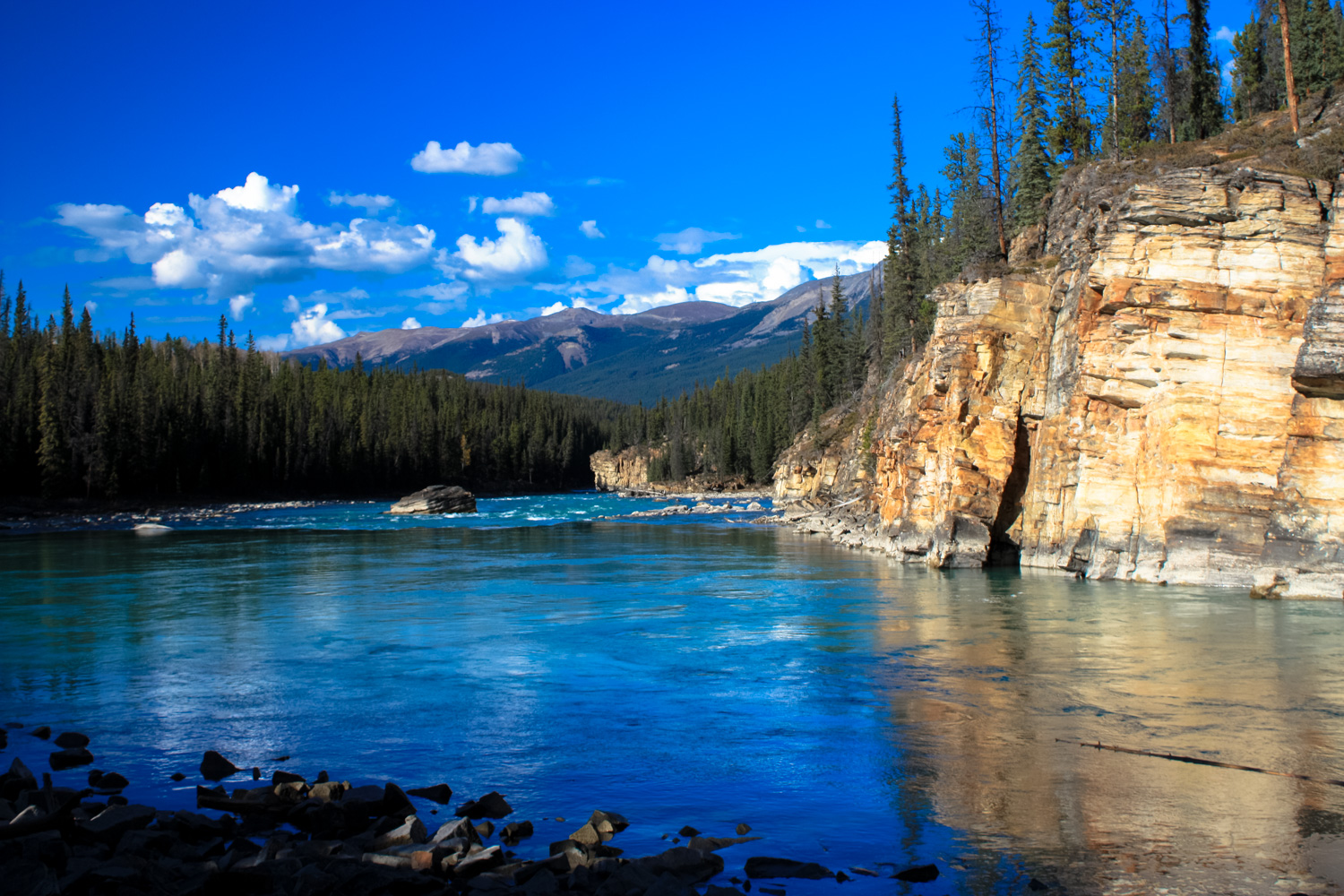 Excellent - this well-maintained and popular stop is on a mostly paved path with interpretive signs and handrails near the more dangerous sections.

There is no camping at the falls, but the primitive Kerkeslin Campground is about a 6 minute drive to the south along the Icefields Parkway. A camping fee ($15.70 per night as of this writing) is required and does not include entry fee to Jasper National Park. There are also several private lodges and campgrounds nearby.