The Sierra Nevada hosts some of California’s most jaw-dropping scenery and as you can imagine, its Ansel Adams Wilderness is no slouch in the good looks department. In an area absolutely crawling with gargantuan snow-draped peaks and stunning sunlit watering holes, where iconic views and epic vistas are a dime a dozen, perhaps none are as universally revered as sparkling Thousand Island Lake capped by massive Banner Peak. 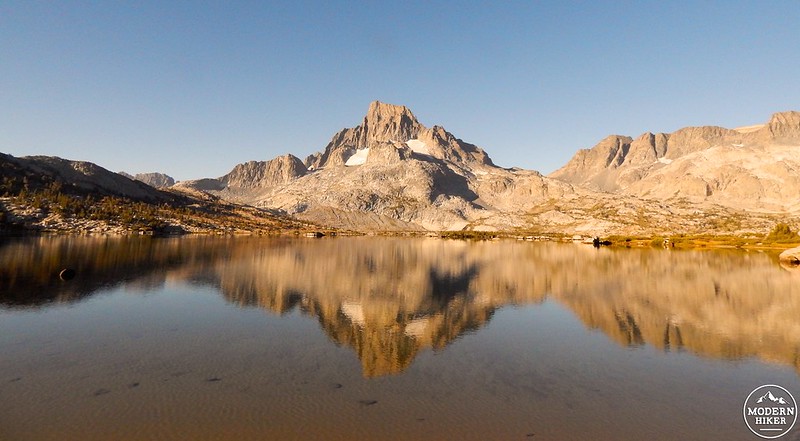 While you can make your way to this alpine paradise via the iconic Pacific Crest Trail (PCT) and John Muir Trail (JMT), we suggest you also consider this shady jaunt along the Middle Fork of the San Joaquin River.

Begin your trip at Agnew Meadows, the first stop on the seasonal shuttle from the Mammoth Mountain ski area (or the first right turn as you head down the winding road past the fee station at Minaret Summit). If you’re arriving via shuttle, take a quick stroll down Agnew Meadows Road, passing a pack station, then the parking area for the High Trail trailhead (aka the northbound PCT), and finally arrive at a second area complete with parking, vault toilets, garbage receptacles, and informational signage – this is where the magic begins! 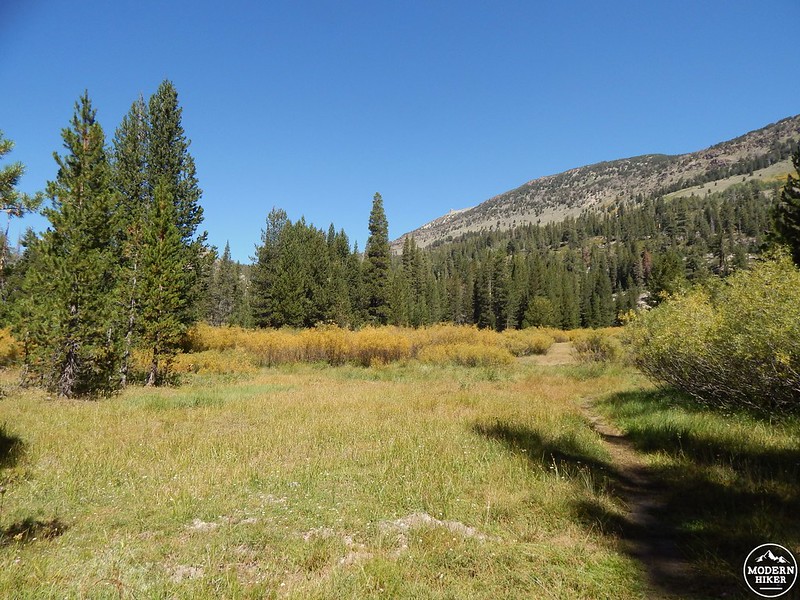 After securing any smellables in the trailhead’s communal bearproof storage lockers, look for a brown wooden sign headlined “Pacific Crest Trail.” Although the signage indicates that Thousand Island Lake is to your left, you actually want to head right towards the Shadow Lake Trail and River Trail – I promise you’ll actually end up at the lake, and since you’ll avoid the high, sunny slopes above, it’ll be a much less sweaty affair. Heading southwest, you’ll take the trail to your right and will almost immediately cross a small stream via a short log bridge. After a few minutes, Agnew Meadows quickly presents itself on your right; this expansive area glows bright green in wetter months and offers the possibility of seeing mule deer in action – have a quick scan to see if you spot any of these meadow regulars frolicking around. 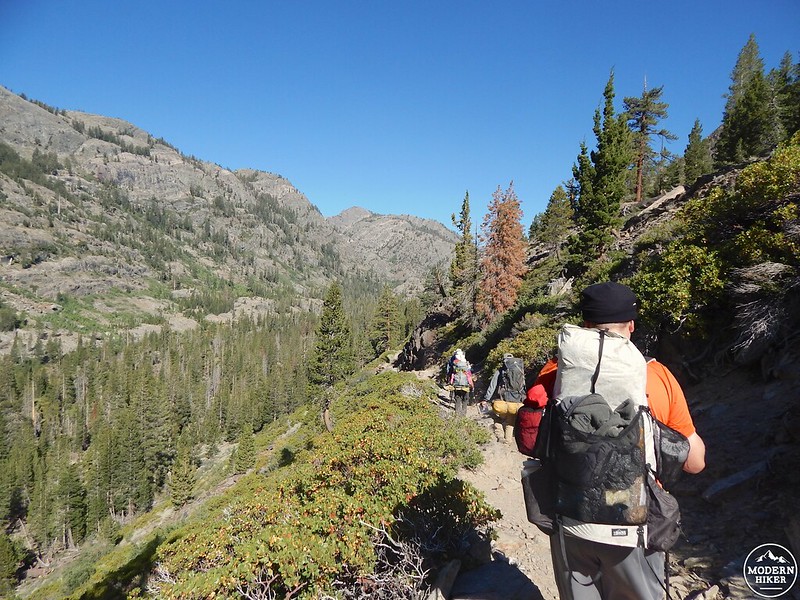 In just under a mile you’ll reach a trail junction – up to the right, a fork leads to the currently shuttered Agnew Meadows Campground, which was closed because of extensive damage from the 2011 Devils Windstorm, a rager that felled tens of thousands of trees in the area. The left fork leads to the River Trail and Upper Soda Springs Campground, but you actually want to stay straight, heading significantly downhill (remember this rule for the return trip: what goes down must eventually come up!). Over to your left is the deep gouge of the San Joaquin River and above that, the high cliffs hold back a number of glittering gemstone lakes scattered along the JMT – another (very worthy) trip for another day.

Not to worry, though – you have plenty of water in your very near future. Around 1.5 miles, you’ll finally meet up with the River Trail and will cruise straight ahead across the flattish, often dusty canyon bottom (bring your gaiters), eventually passing scenic Olaine Lake tucked behind the trees to your left. If your water bottle’s running low, look for pre-existing use trails through the trees instead of blazing your own path. Just past the lake’s northwestern tip, you’ll find a trail junction and a handful of fallen logs, a perfect rest stop before the next leg – enjoy a snack, a bathroom break, or just breathe in some of that fresh alpine air. 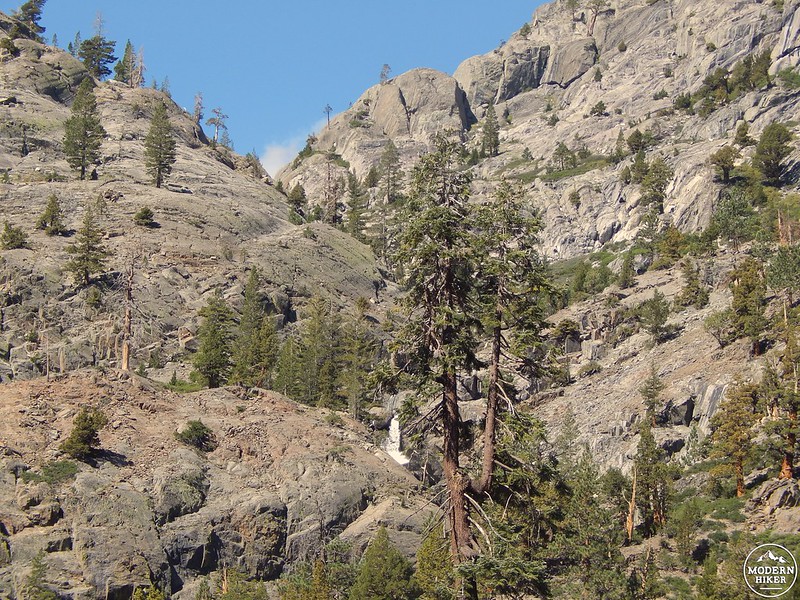 To the left, a spur heads up and over to Shadow Lake and the JMT, and to the right is your route – a somewhat sweaty uphill hustle that continues to parallel the Middle Fork of the San Joaquin. The upside to all of the grunt work in this section is that your views start to expand as you make your way up the striking granite, where the intermittent tree cover is replaced by bright green manzanita (don’t forget the sunscreen!). As you hike, keep your eyes peeled for waterfalls cascading over the slopes around you, especially in late spring and early summer, or even later in a wet year. Speaking of water, you’ll cross several small tributaries of the San Joaquin as you make your way through this section – all relatively simple crossings, unless you’re hiking during the runoff from a high snow year; check with rangers for conditions before heading out to know if you’re in for any wades. 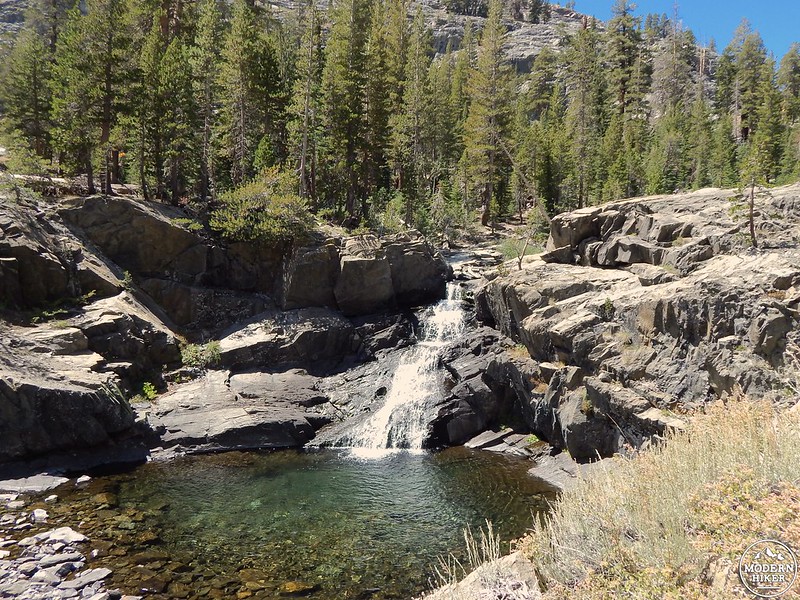 Near the five-mile mark you’ll reach a trail junction – there’s a spur to your right that leads to the High Trail and PCT far above, but instead continue straight ahead, heading northwest. If you’re looking for another break spot, this is a good one – just west of the trail junction, you’ll spot a small, but scenic waterfall and score a lovely view back down the river valley. 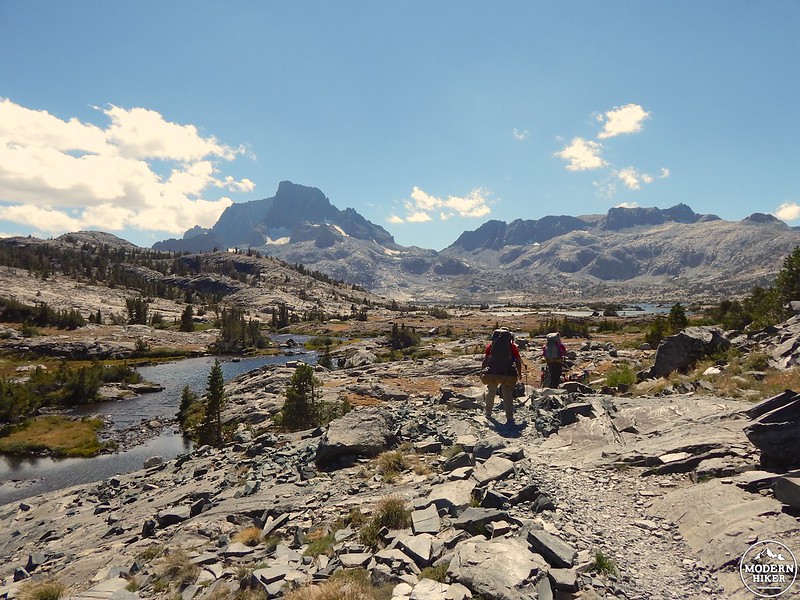 In another half mile you’ll reach yet another junction – this time, the trail to your left leads southwest to Garnet Lake and the JMT, but you’ll continue to the north. As you weave through the boulders and trees, Banner Peak will start to make a guest appearance in the distance. The mountain will become a more prominent fixture after you finally join the PCT 7 miles in, heading left to wind up and around on your final stretch towards the lake. If it’s warm out, you might be tempted to take a dip in several smaller pools you’ll pass, all fed by the Middle Fork of the San Joaquin River, which counts Thousand Island Lake as its source – you’re witnessing the birth of a river, people! 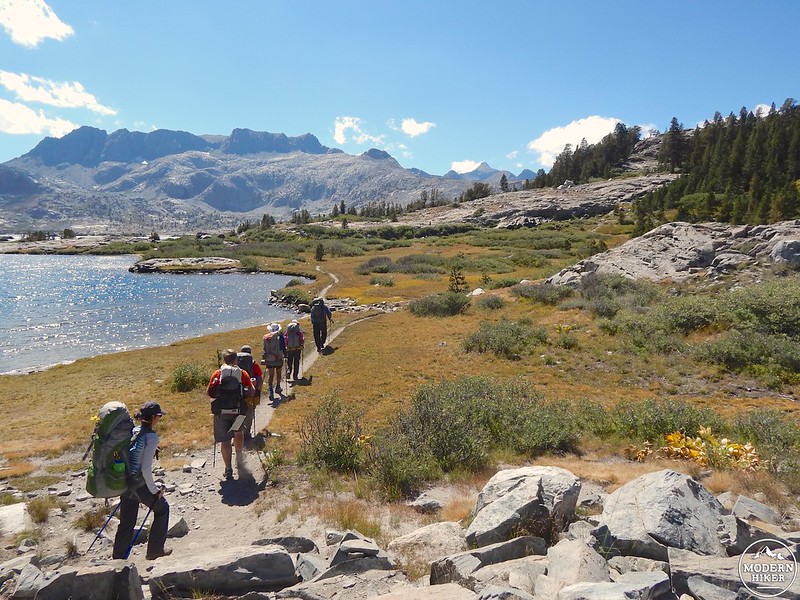 You’ll finally near the lake’s outlet at 7.8 miles – this is a fantastic vantage point (especially during a dramatic sunrise), and this spot also marks the point where the JMT and PCT rejoin headed north. If you’re looking for a beefy day hike, stop here and enjoy a lengthy break before turning around, but if you’re backpacking, depart the PCT and continue on a thin use trail around the lake’s north shore to find some excellent sandy spots scattered along the gently undulating slopes. Look high and low (but not too low – remember to camp at least 200 feet away from the water itself) and some really spectacular sites will present themselves – I happen to think the further you walk, the better they get, but your (theoretic and literal) mileage may vary. One thing to note – camping isn’t allowed within a quarter mile of the outlet, so to be safe, make sure you’re beyond the lake’s first “island” before scouting out a place to stake your tent. Once you’re situated, go for a swim, gather your fishing supplies, break out a good book, or perhaps make a go at the summit of Banner Peak or Mount Ritter. Whatever you choose to do, rest assured that it’ll be in the midst of some of the most spectacular scenery in the Sierra. 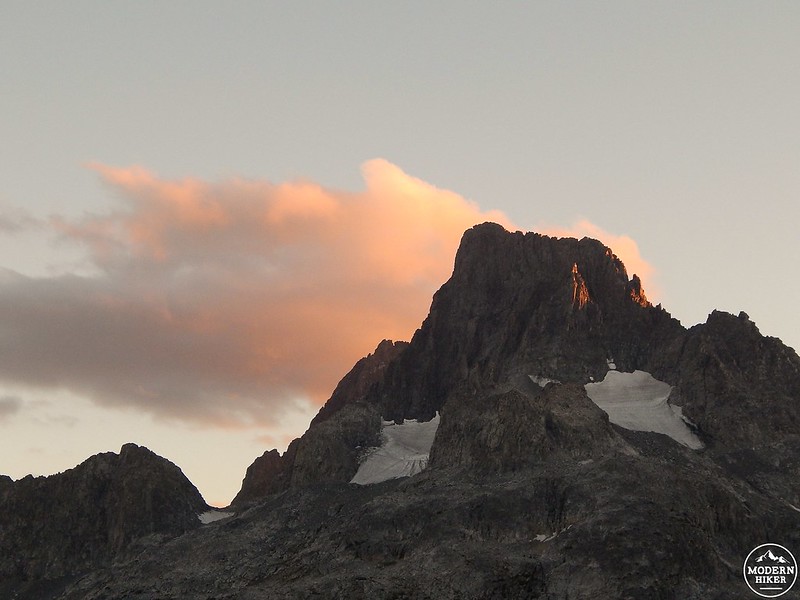 Camping inside the Ansel Adams Wilderness is allowed with a Wilderness Permit (quotas may be enforced; no permits necessary for dayhikes), proper food storage is required, and a free California Campfire Permit is necessary if you're planning to have a fire (this includes open flame stoves). The closest developed campground is at the trailhead in Agnew Meadows; however this is currently closed due to windstorm damage. There are multiple other first-come, first-served options scattered throughout the Reds Meadow Valley, including Upper Soda Springs, Pumice Flat, Minaret Falls, Devils Postpile, and Reds Meadow. Campgrounds are only open during the summer months.

From I-395, head west on SR 203 to the town of Mammoth Lakes. Turn right on Minaret Road / SR 203 and continue to the entrance booth at Minaret Summit (fee), then head down a steep, narrow, winding road for just over 2.5 miles until you reach Agnew Meadows Road after a hairpin turn; parking is available at the trailhead just a few minutes down the road. During the summer months you cannot drive past Minaret Summit unless you are camping in a developed campground. Shuttle info below.

Was just up there - they opened the road July 4th - All lakes above 9,000 feet are still pretty frozen, but most are accessible if you have trekking poles and microspikes for snow traction!

Does anyone know the status of snow on this trail? I would be hiking it June 20-23 if possible.

Yea the snow will be out of control.

April is very, very early to venture into the High Sierra. The road to Reds Meadow is usually closed until mid-June to early July, depending on snowpack, which means an additional 6 miles round trip to hike (well...in reality, snowshoe) down and up the road (just under 1000' of loss on the way down...and a nearly 1000' climb back up). In April, the trail will likely be obscured with snow - and even if there is snowmelt, it will swell creeks and rivers and flood the meadows, which means parts of the trail would be underwater. I DO NOT recommend attempting this hike in springtime unless you have excellent navigation and snow travel skills. This is a summer & fall hike.

April is very, very early to venture into the High Sierra. The road to Reds Meadow is usually closed until mid-June to early July, depending on snowpack, which means an additional 6 miles round trip to hike (well...in reality, snowshoe) down and up the road (just under 1000' of loss on the way down...and a nearly 1000' climb back up). In April, the trail will likely be obscured with snow - and even if there is snowmelt, it will swell creeks and rivers and flood the meadows, which means parts of the trail would be underwater. I DO NOT recommend attempting this hike in springtime unless you have excellent navigation and snow travel skills. This is a summer & fall hike.

This year? Maybe. Snowpack is well over 100% in the Sierra and there are more storms on the way. Doesn't mean this won't be doable, but it might be a bit more technical than usual.

I also am looking to hike this in april 2019. do you think the snow will be crazy still?

I’m planning (hopefully!) on doing this hike early April, does anybody know if this will be possible due to snow? Thanks!

That's a fantastic time to travel in this area, especially considering this year's snowpack. You should be able to find hammock spots on the north side of Thousand Island Lake; I might also recommend continuing north on the PCT/JMT from the lake outlet, since the views of the lake and peaks are spectacular from above, and there are plenty of trees between the PCT/JMT and the lake shore. Looping back through Garnet & Ediza via the JMT is a great idea. I feel like there are fewer trees by Ediza & Garnet, so you might need to wander a bit to find something suitable. Keep in mind that there is no camping within 300' of the outlets for Thousand Island or Garnet Lake...and have fun!!