The Windows Loop is a relatively easy trail that sits in the southeasternmost section of the main paved road that runs through Arches National Park. It packs a lot into a short distance – in just over 2 miles you can see two of the largest Windows in the Windows Section of the park, along with the impressive Turret Arch and the unique open amphitheater of the aptly-named Double Arch.

Begin your hike at the southeast end of the loop on a wide gravel trail heading toward the North Window.

This trail is very well-signed and easy to find your way on. Most of the junctions are signed – but don’t forget to keep your eyes peeled for other interesting rock formations along the way to the North Window. 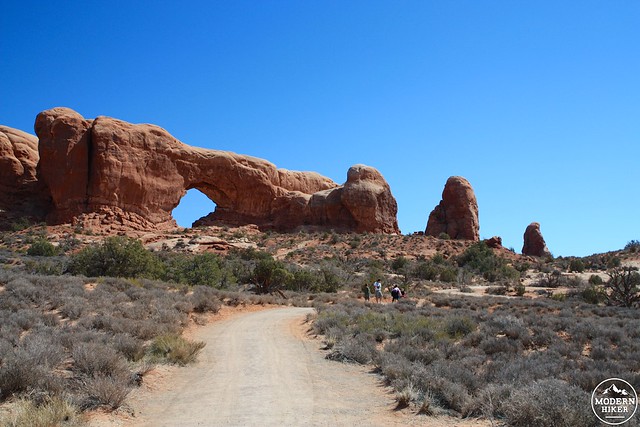 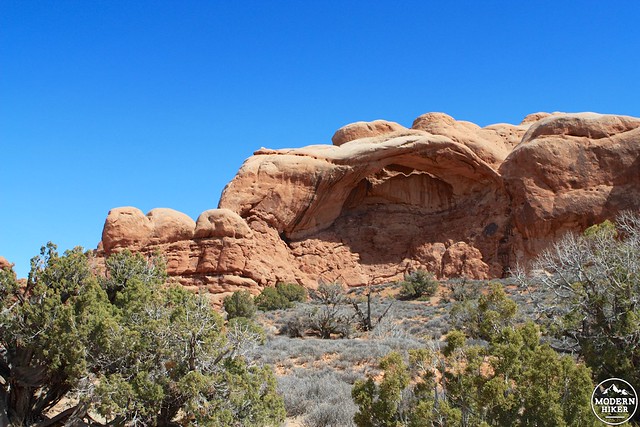 The North Window formation is only about 0.2 miles from the trailhead, and you can walk right into the Window itself for a nice view northeast toward Dry Mesa and Dome Plateau. 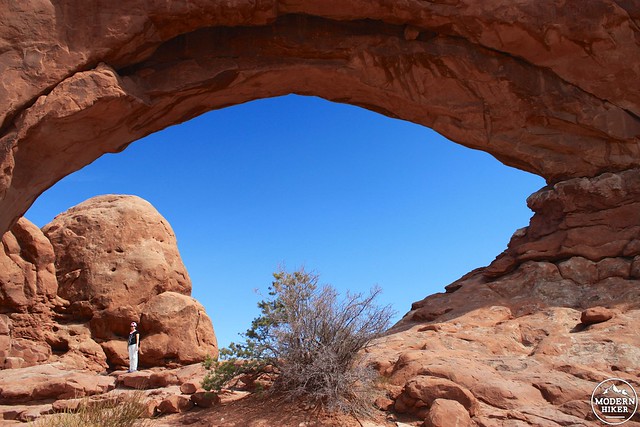 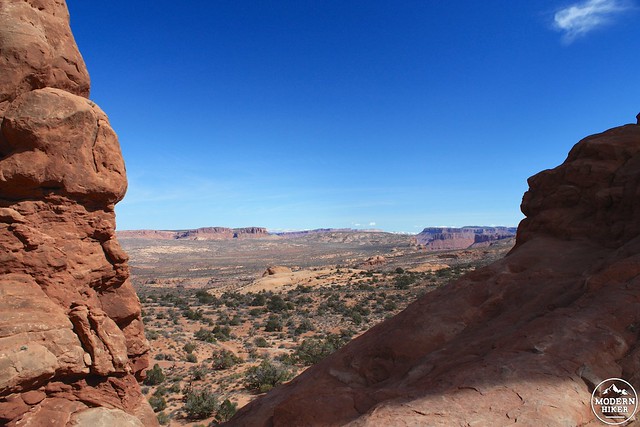 Descend from North Window toward the southwest and at 0.33 miles keep right to make a short side trip to Turret Arch. This one’s also pretty easy to spot, as the gravel trail climbs up a short staircase and drops you off right in front of the arch. 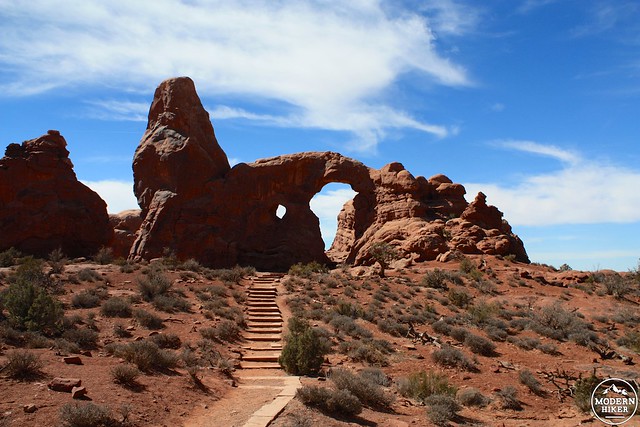 You can leave the trail to walk through the arch itself, giving you a nice look back through Turret Arch (and the small window of Portal Arch) to the North Window you just visited: 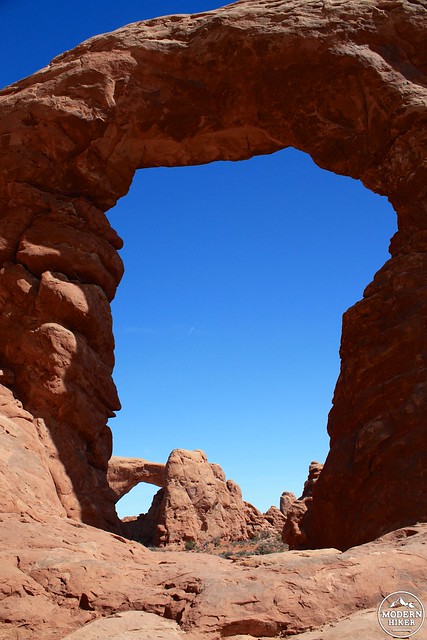 When you’re done soaking in the views from Turret Arch, backtrack to the junction you took to head to Turret Arch and this time continue to the northeast to make your way toward South Window.

Perched up on a cliff, the South Window formation isn’t accessible like Turret Arch or North Window so you’ll mostly just be able to see sky through it. 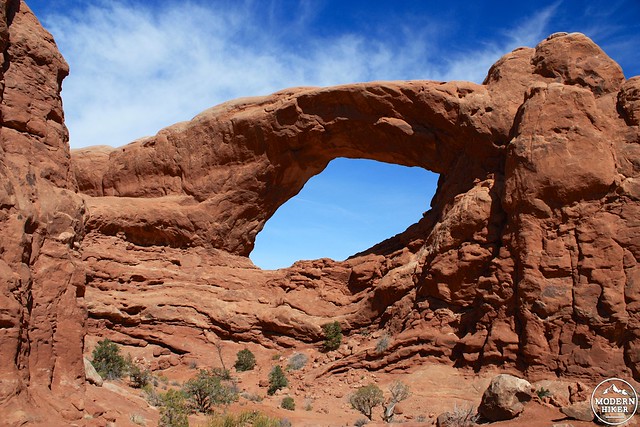 Just past the South Window, the gravel trail ends and you have the option to return to the trailhead the way you came or take the less-traveled and more interesting Primitive Loop Trail.

If you’re hiking this during the park’s high season, the Windows Trail is likely to be fairly crowded – but the Primitive Loop Trail will probably spook off the more casual car-strolling hikers and leave you with a beautiful stretch of trail with some truly phenomenal scenery – as well as some “behind the scenes” views of the Windows.

Until just past the mile mark, you’ll follow cairns through the Utah desert passing colorfully-named rock formations like Bicep Arch, Seagull Arch, and No Big Deal Arch in the distance to the northeast (for fun, grab a good map of the rock formations and just read off some of the names of these things). 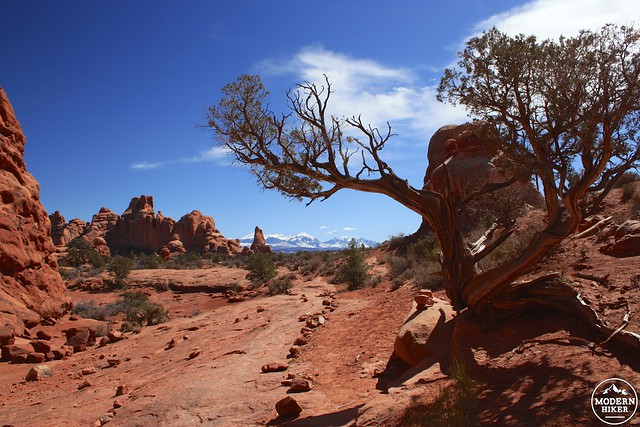 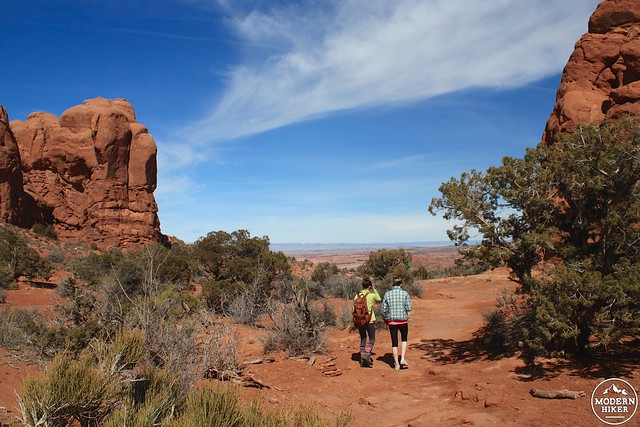 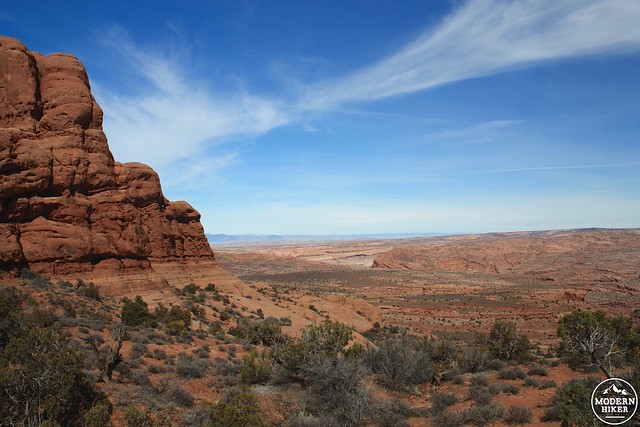 As you travel the Primitive Loop Trail, be sure to stay on the trail itself. Like many places in this region of the planet, the dirt is actually a complex combination of soil, bacteria, fungi, and algae called cryptobiotic soil – and it’s very, very fragile.

Just past the 1 mile mark, the trail turns back toward the parking area and makes a beeline for the paved road. Once you reach the road, follow it to the north counter-clockwise until you reach the trail to Double Arch.

This short 0.3 mile trail takes you past the colorfully named Parade of Elephants formation and Mule Deer and Raven Arches toward Double Arch. 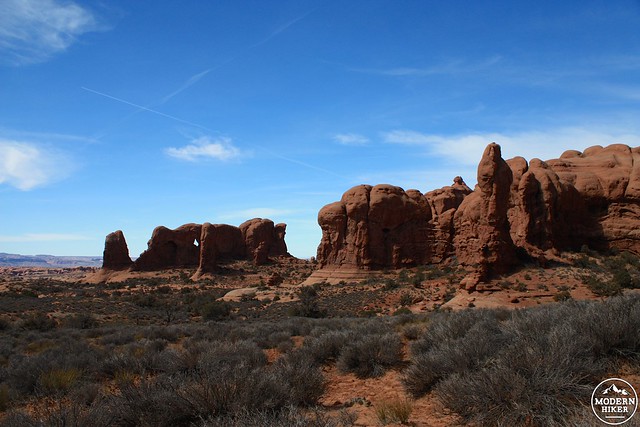 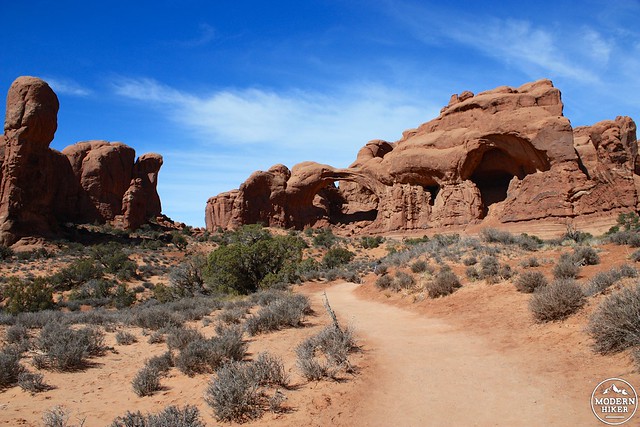 Double Arch itself is one of the most unique and interesting formations in Arches – and that’s saying a lot. It’s two separate arches that are very close together with a hollowed-out center. This formation is unlike most of the other arches in the park in that it’s a pothole arch – that is, it was formed by water erosion from above rather than wind and water erosion from the sides.

Movie buffs and adventure enthusiasts will recognize the formation from the opening sequence of “Indiana Jones and the Last Crusade,” although the cave young Indy enters doesn’t actually exist. 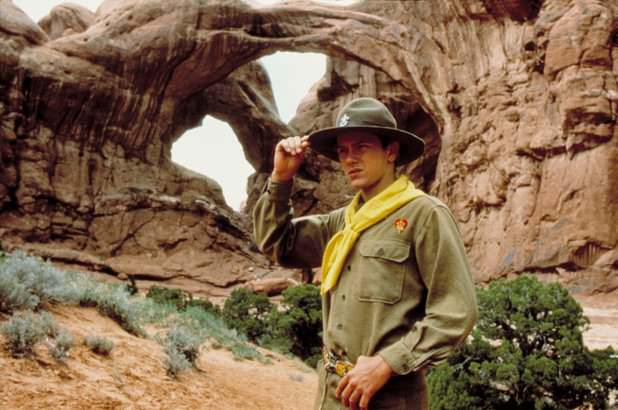 We recommend scrambling up inside the the amphitheater between the two arches for a unique perspective on the trails you just hiked.

When you’re done, return back to the trailhead the way you came in. 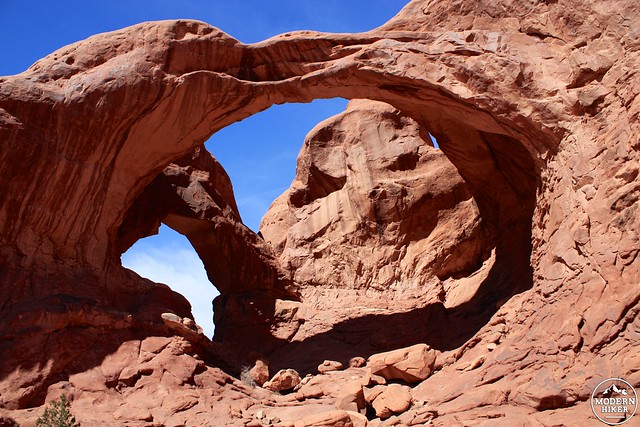 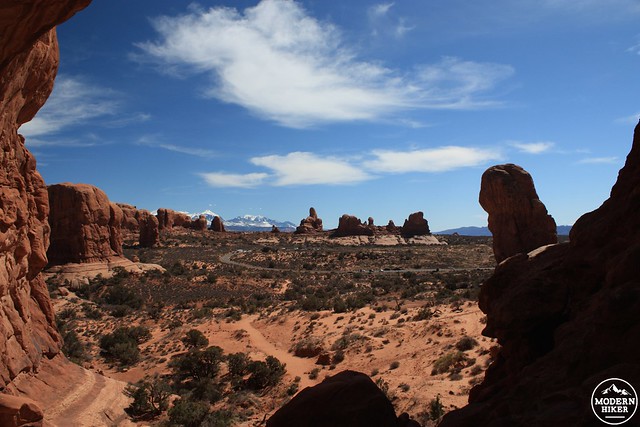 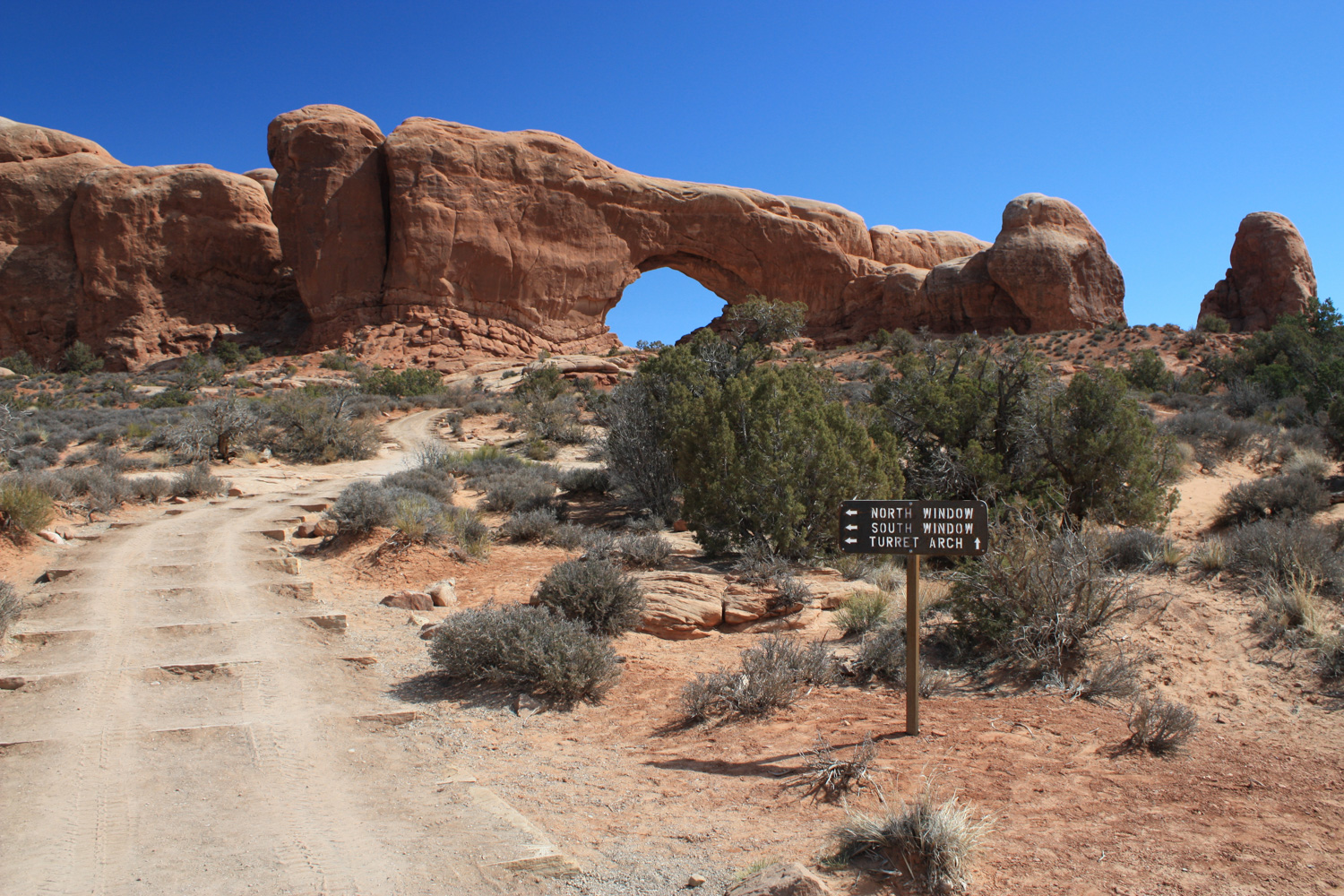 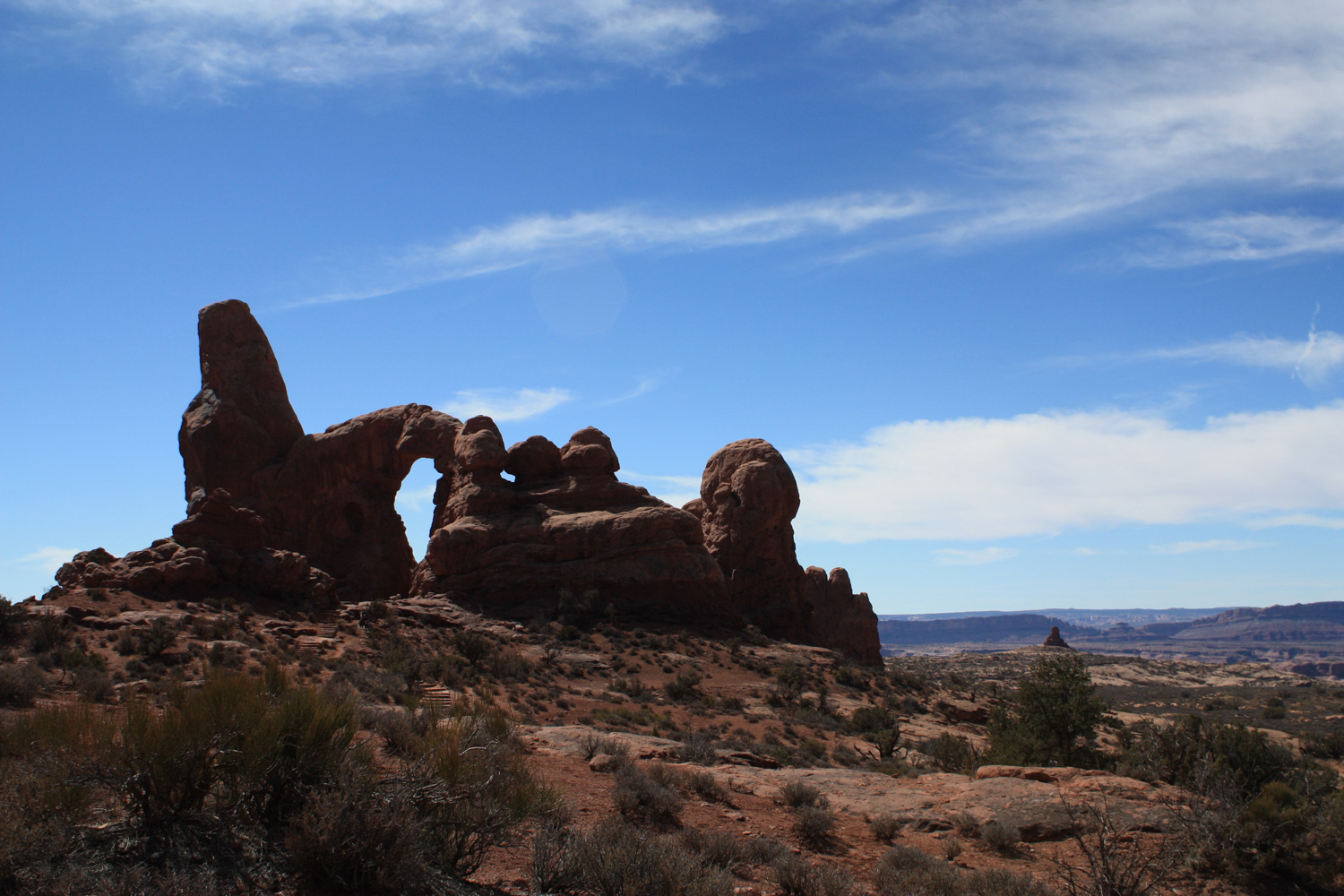 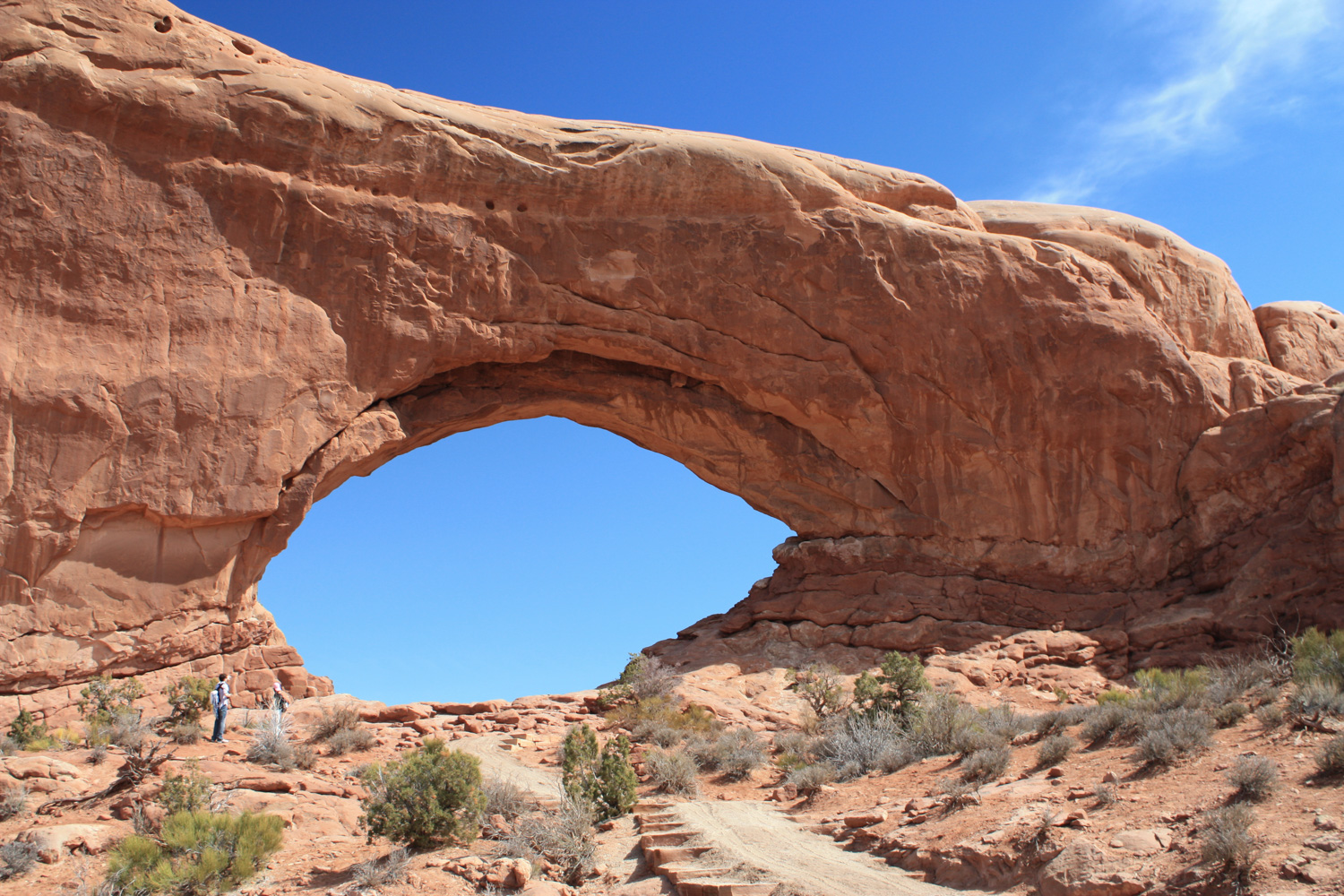 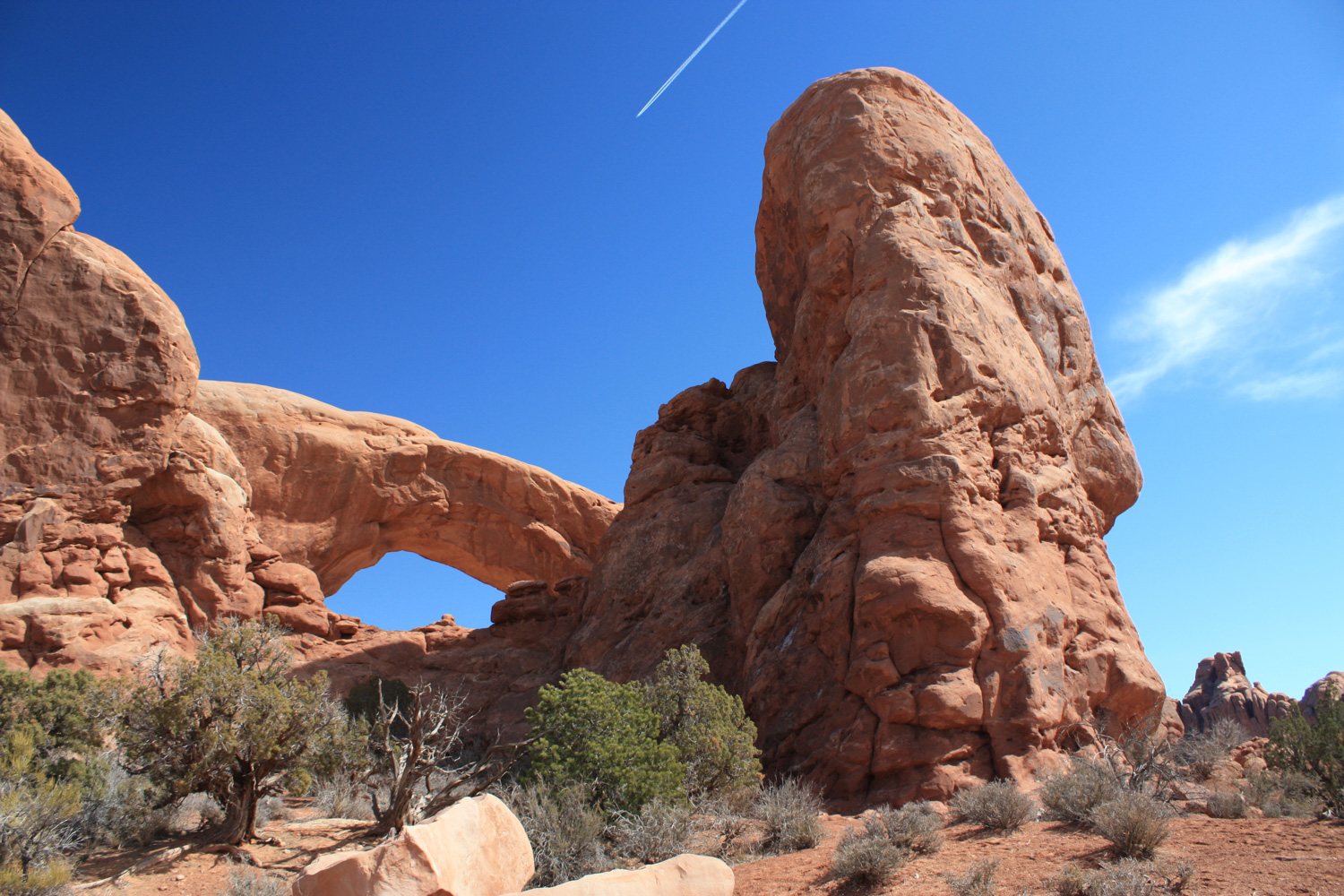 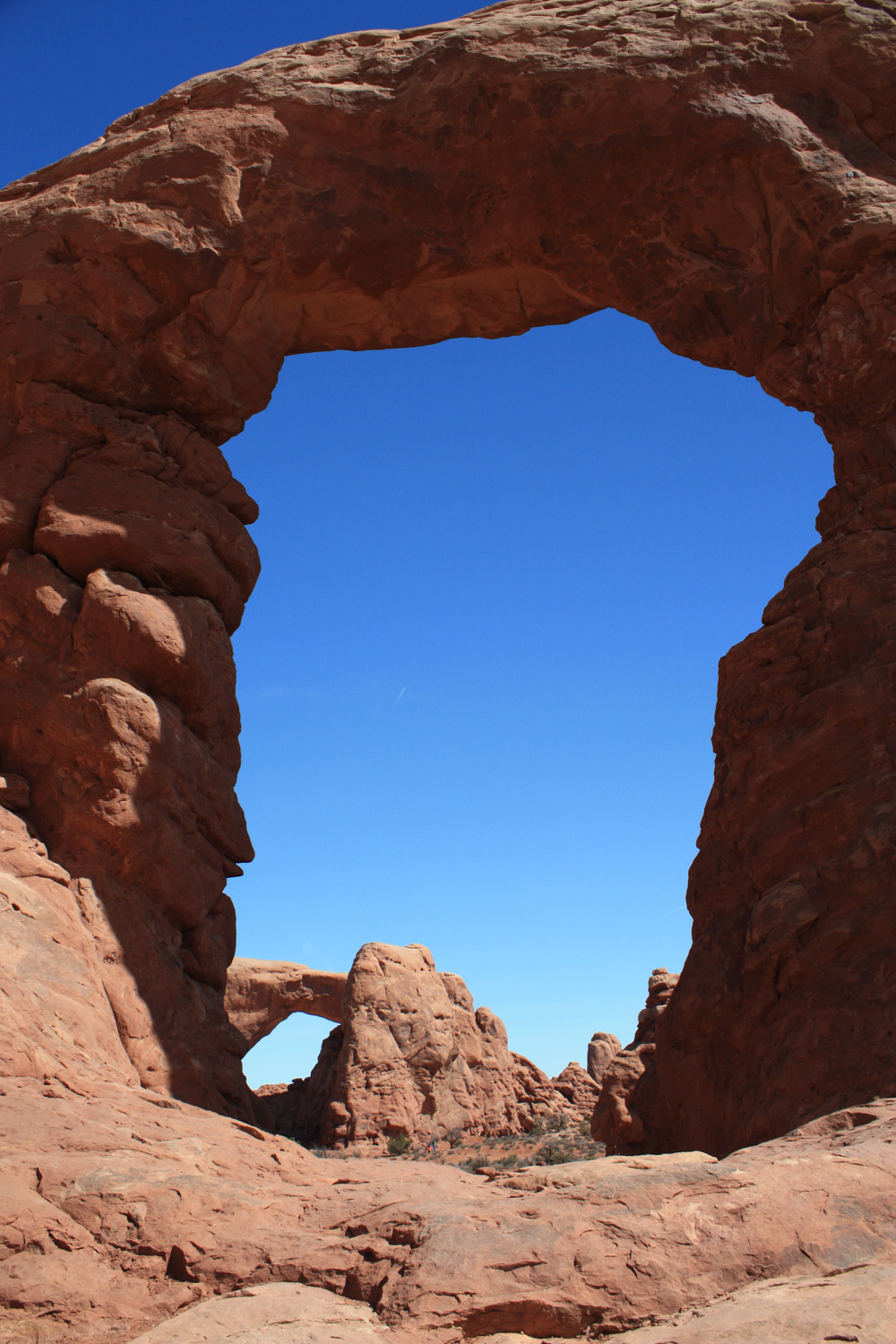 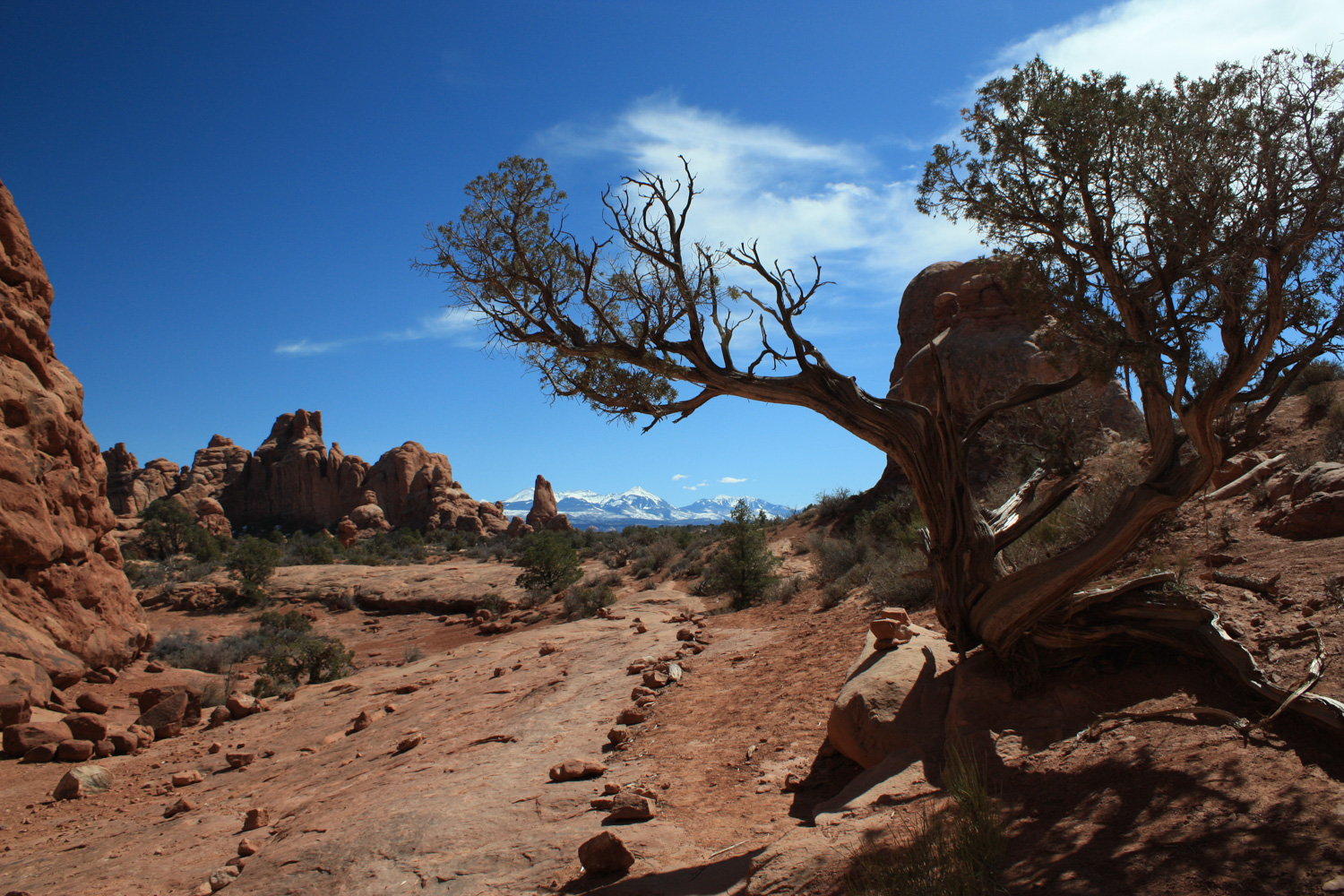 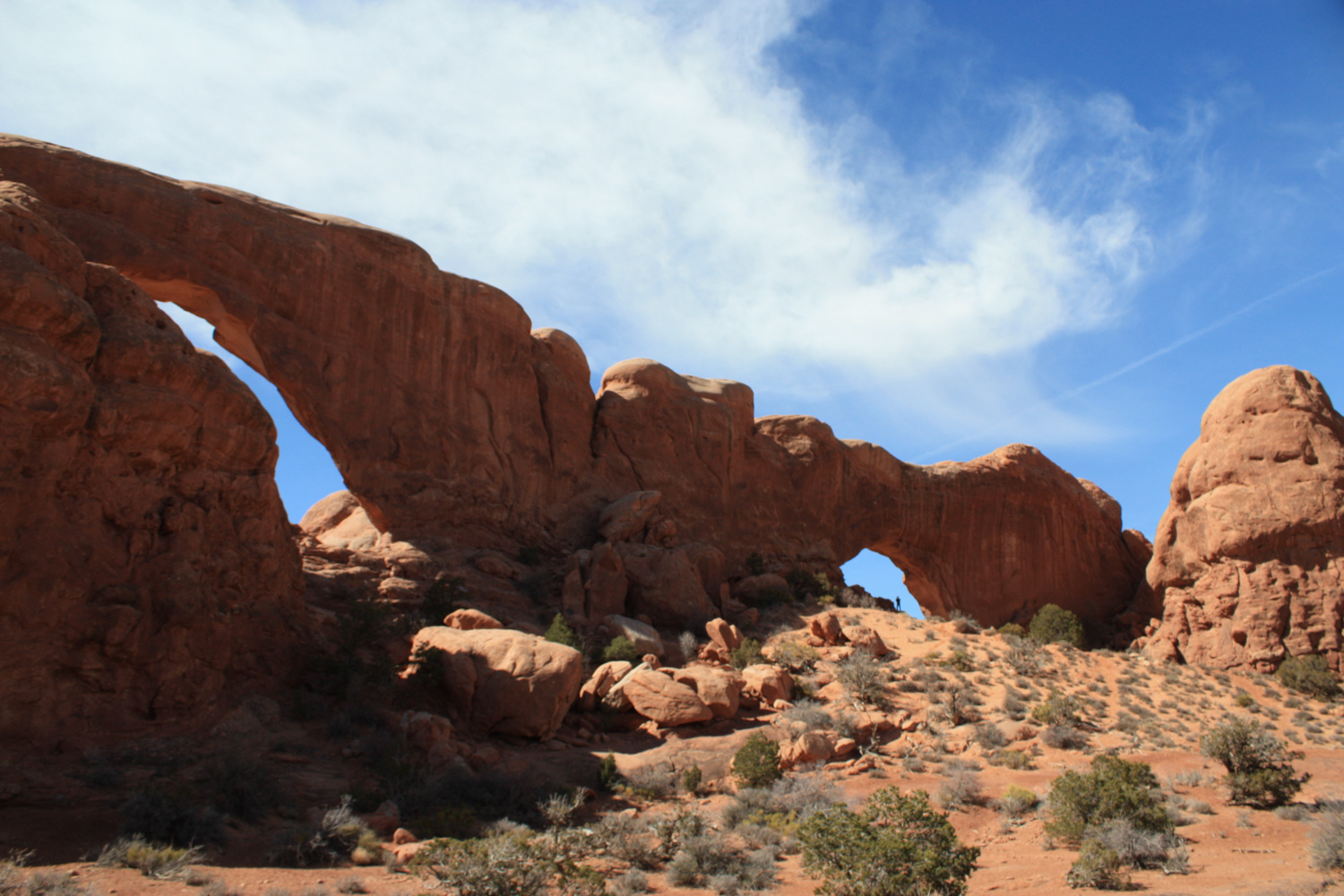 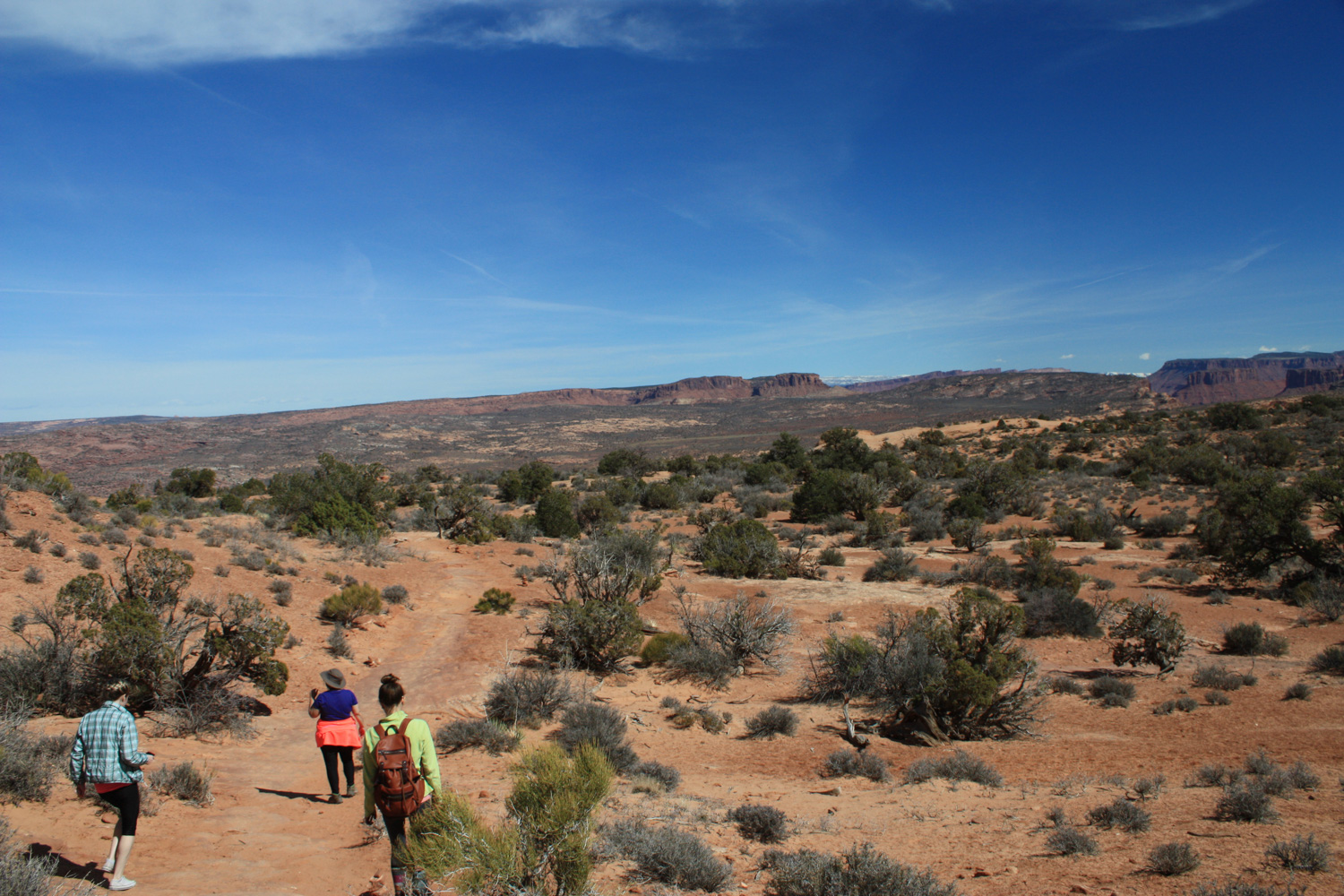 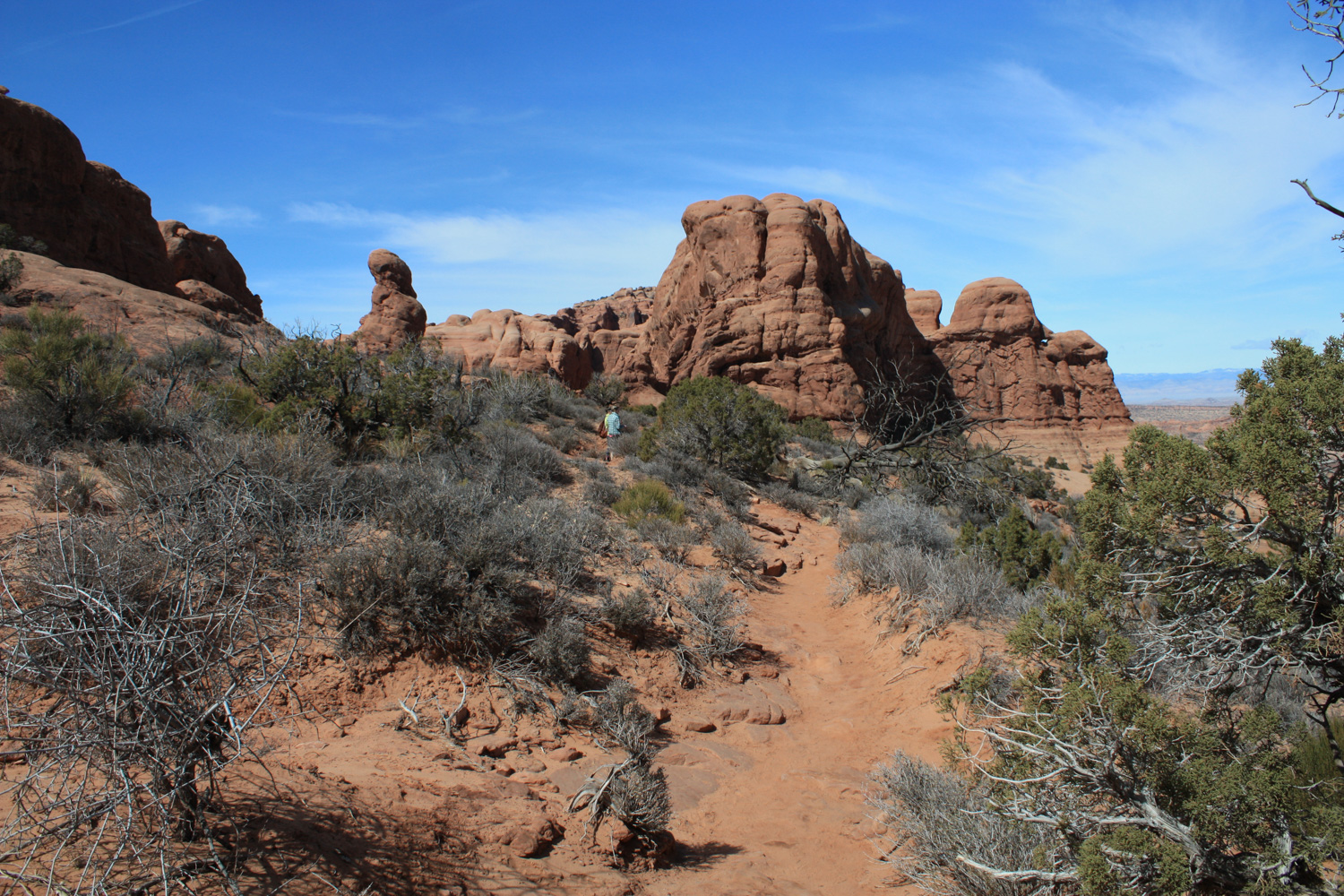 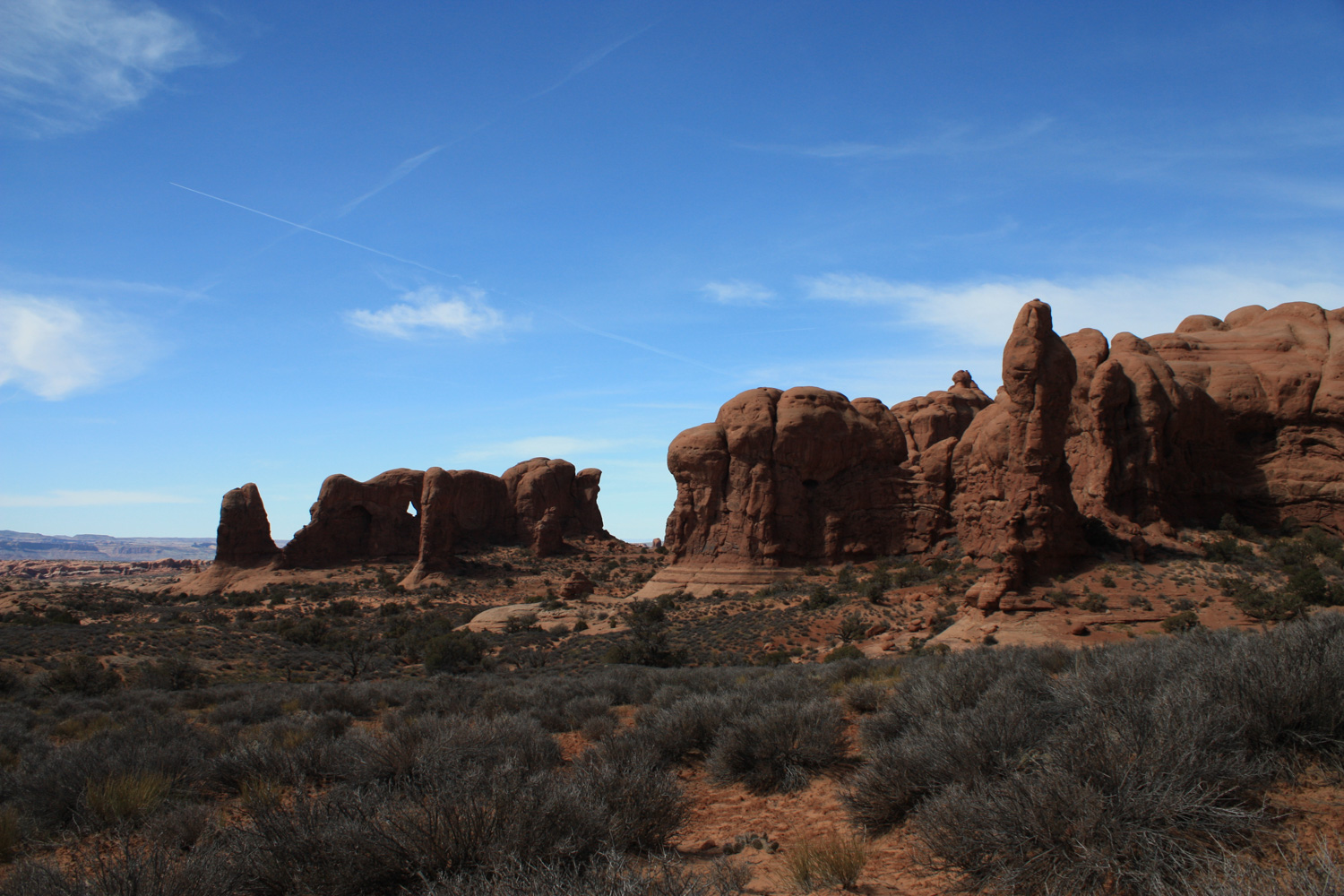 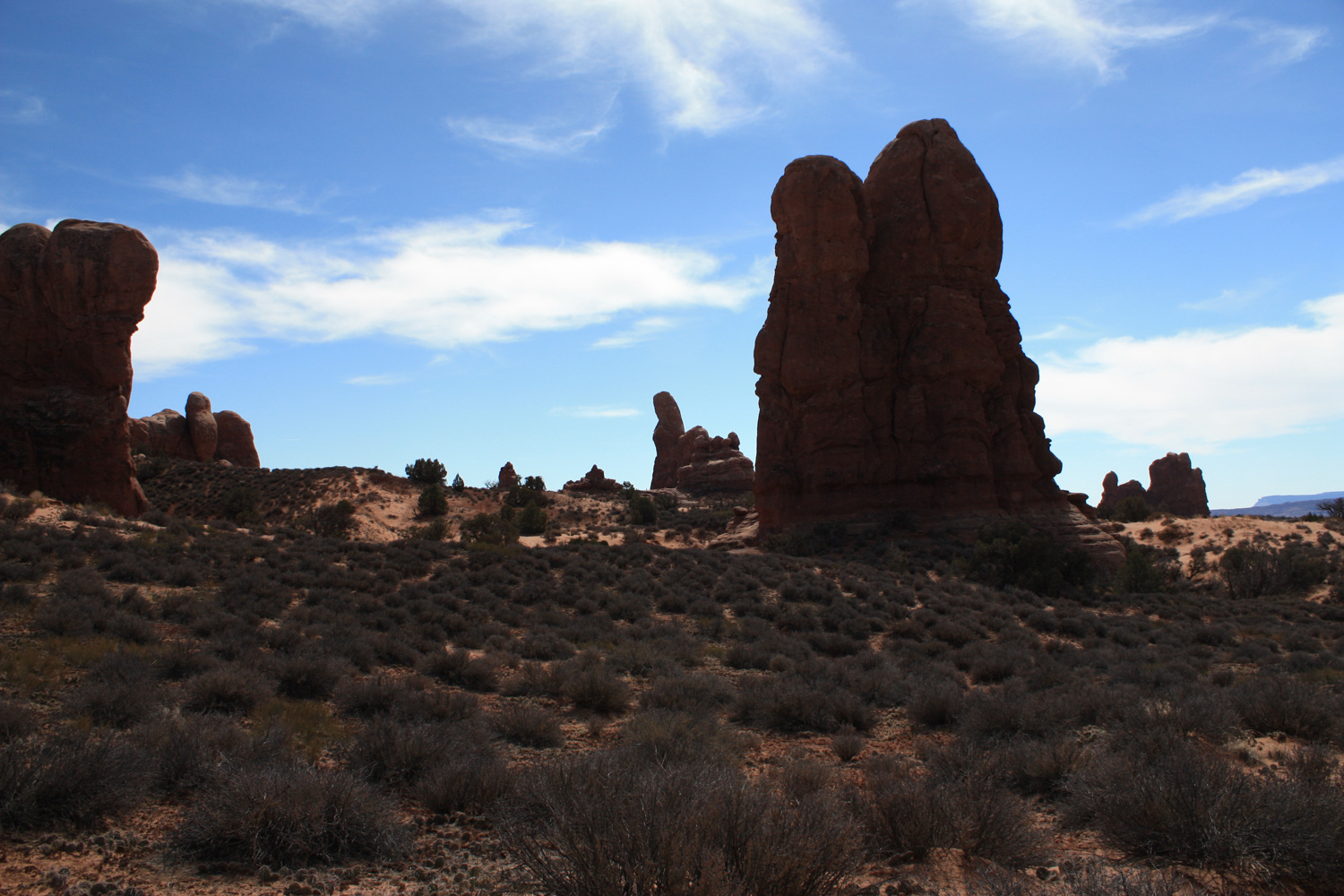 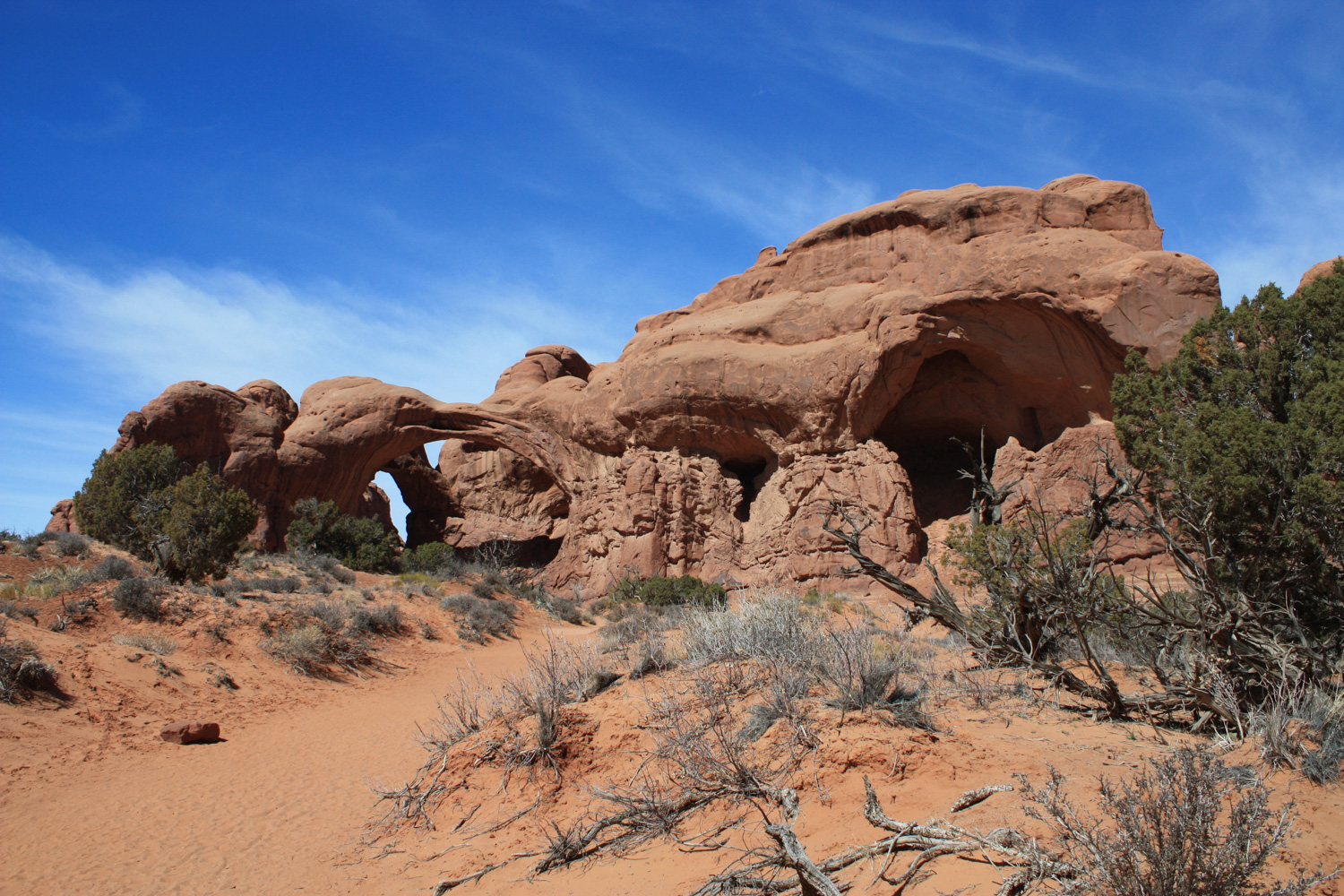 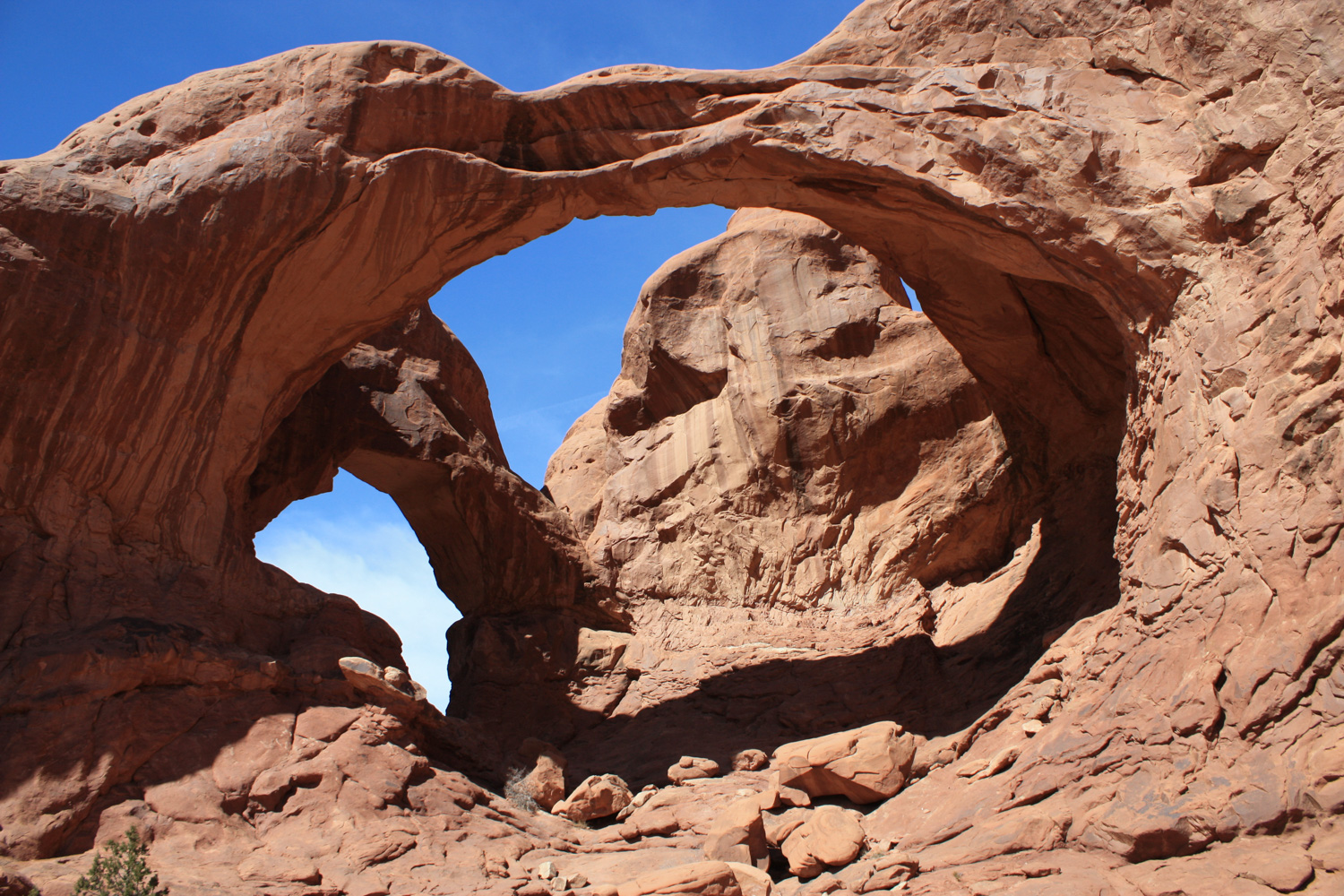 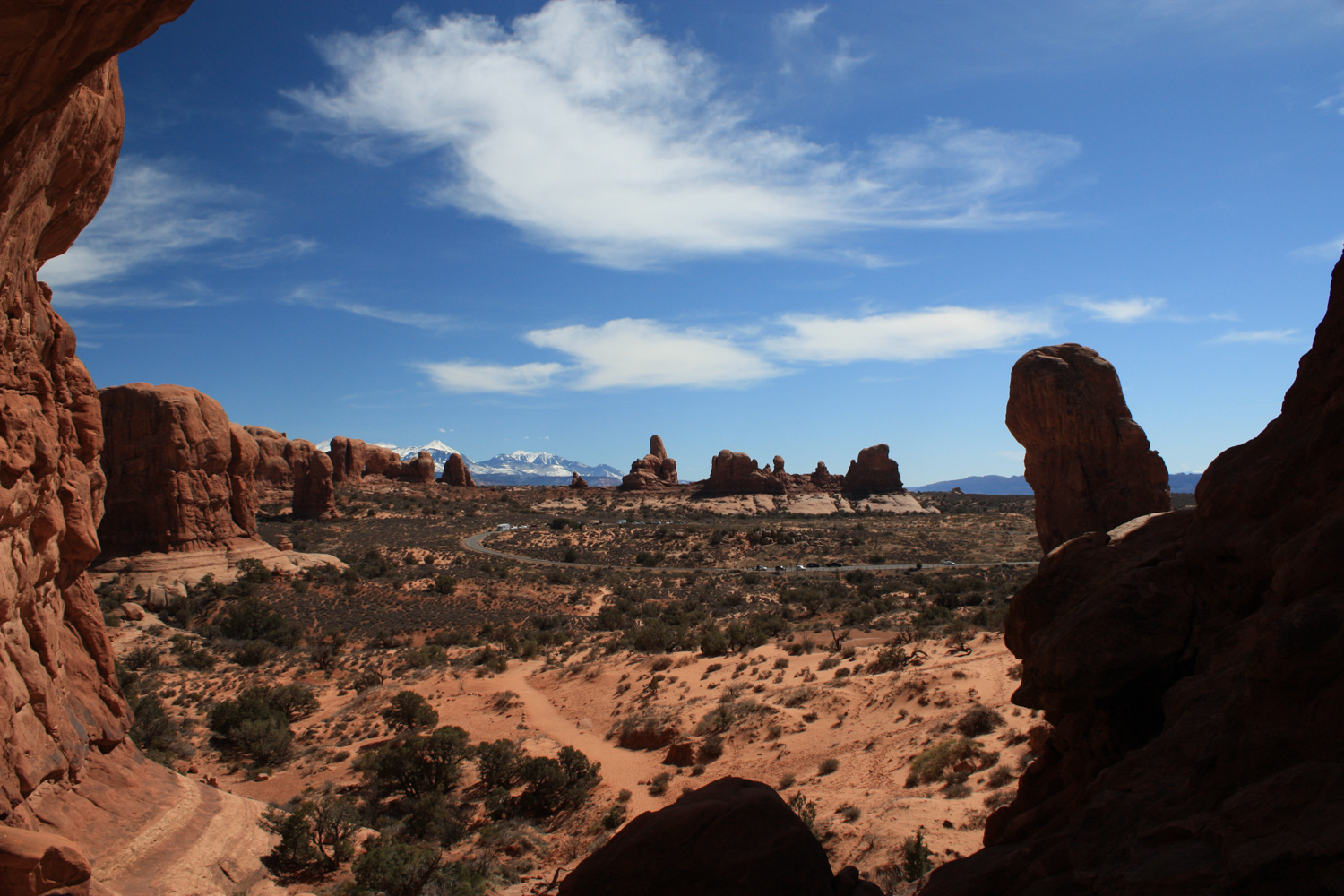 Good. Most of the trail is very clearly marked and easy to follow. There are some sections of primitive slick-rock trail where you'll have to follow cairns but it isn't terribly challenging.