If you’re heading into Canyonlands National Park‘s Island in the Sky District and looking for a good introduction to the scenery that awaits you, this partial route on the Lathrop Trail is an excellent place to start.

Located near the entrance to the Park, the Lathrop Trail is traditionally a popular entry point for backpackers looking for multi-day trips deeper into the Canyon and potentially even down to the Colorado River itself – but if you’re not looking to spend a lot of time it also makes for a beautiful and relatively uncrowded short day-hike, providing unbelievable views of the Canyonlands region without the crowds you’d expect at shorter trails and pull-off viewpoints.

The trail begins at a rather unassuming signpost just south of the Island in the Sky Visitor Center – a great place to stop for info and recommendations from the rangers. Weather can change frequently and drastically here in Canyonlands, so it’s always a good idea to ask a ranger about trail conditions before you head out. 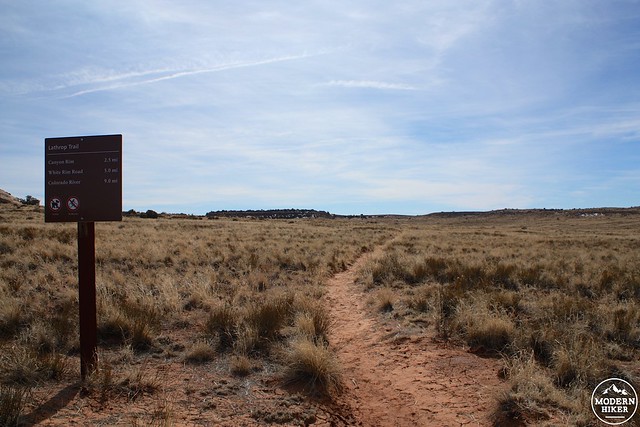 One of the first things you’ll notice when hiking on the Lathrop Trail is the distinct lack of canyons. Indeed, the first mile and a half travels through an area known as Grays Pasture. From the 1940s through 1964 when the National Park was established, a rancher named Howard Lathrop herded sheep in the canyon below and this trail was a well-used supply route for him and other ranchers in the area.

Today, the sheep are gone but mule deer do still graze the area – although they tend to hide out under juniper trees during the day to stay out of the hot sun.

While a hike through a grassland may not sound like a major attraction in a place called Canyonlands National Park, the first part of the Lathrop Trail is indeed quite beautiful. In a way, the reserved subtleties of the grassland are both a welcome respite from – and a great appetizer for – the majestic canyon views you’ll see later on the trail. It also doesn’t hurt that there are gorgeous snow-capped mountains nearby, either. 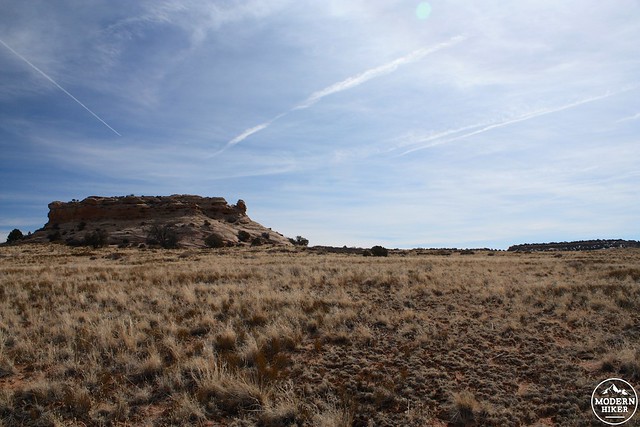 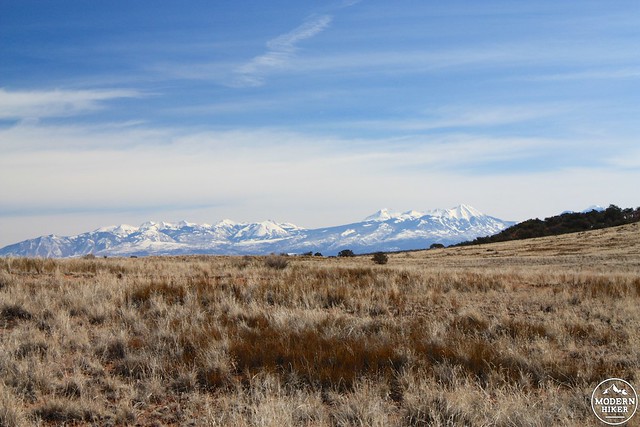 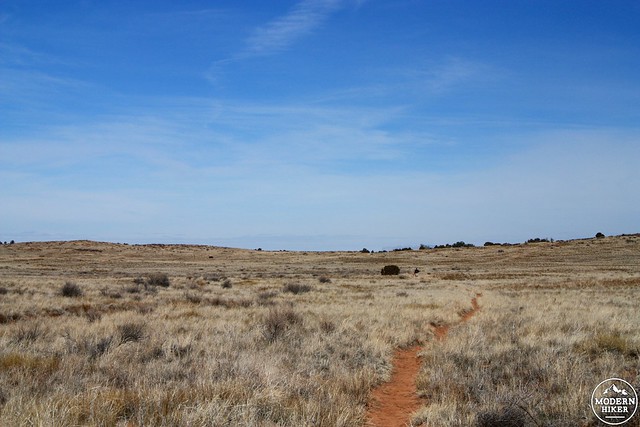 As you hike the first 1.6 miles toward the canyon rim, the canyonlands will begin to reveal themselves on the distant horizon. The trail approaches and skirts some small hills and you’ll note the trail turns from the muddy dirt of the grassland to sand – this is because the ground you’re walking on is now mostly sand dunes that are lightly covered with vegetation. They’re very small dunes, but they’re also a very unexpected surprise when you’re hiking through grassland … even if you know you’re in a high desert climate. 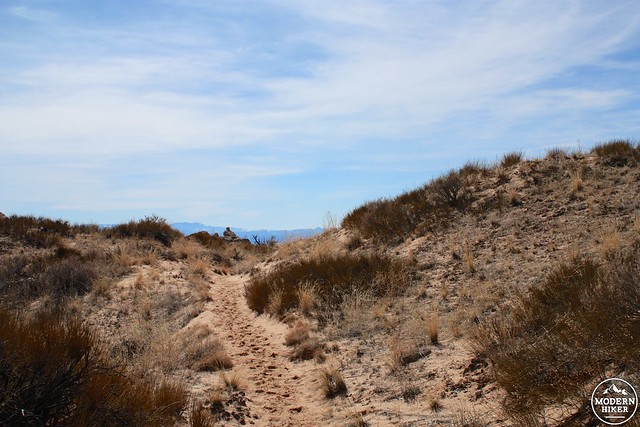 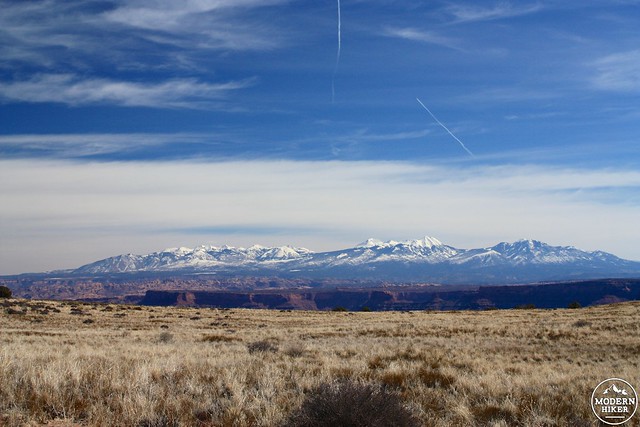 At about the 1.6 mile mark, the trail climbs down through some badlands and onto a section of slickrock. 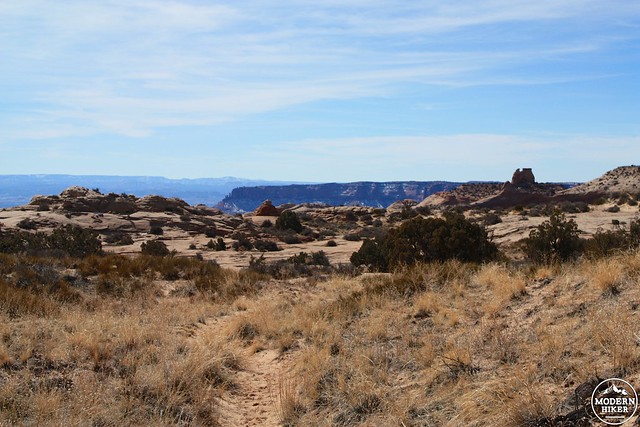 If you haven’t hiked on slickrock before, it’s a fun experience. Instead of following an established route built or beaten into the ground, you instead have to keep your eyes peeled for small piles of rocks called cairns that mark the best route forward. While this is generally not difficult to do, sometimes hikers will mark their own routes along the trail and other hikers may get confused and follow a different path.

This, however, is an easy section to follow. You just might be distracted because this is also going to be the first time you’ll be able to catch some glimpses of the canyons – as well as the massive free-standing flat-topped formation known as the Airport Tower. 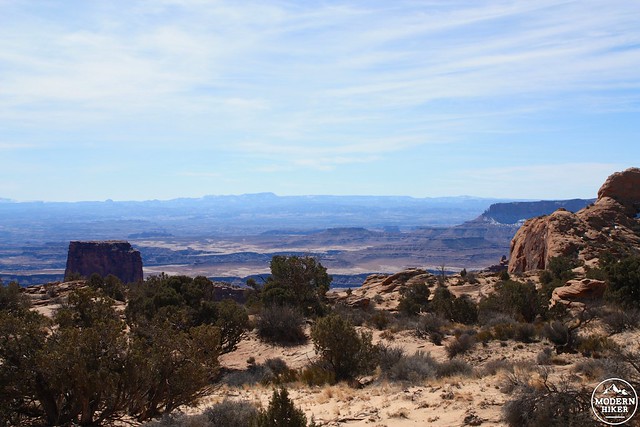 The trail drops down some of the slickrock and into a narrow wash lined with junipers and sagebrush before dropping you off onto another narrow mesa cliff jutting out into the canyon. Although the terrain looks similar to the meadow you started on, it’s several thousand years older. Not only has the vegetation changed quite drastically, but the ground itself looks different. And now you know what it feels like to walk through the Jurassic Era. 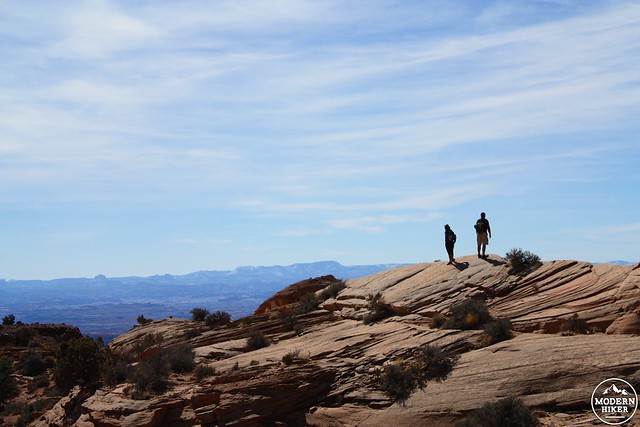 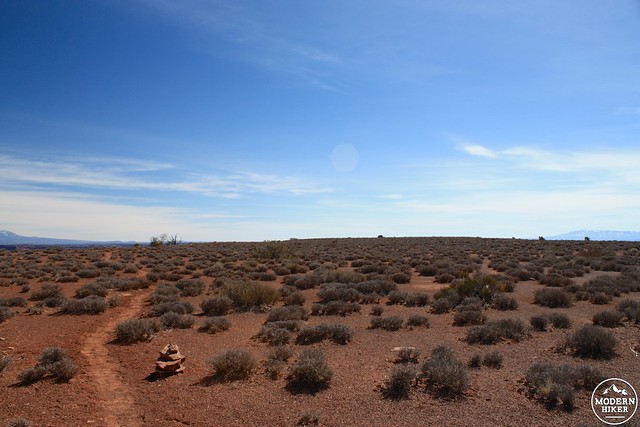 The faint trail follows cairns and a well-worn path across this small mesa. The trail drops a few times, bringing you closer and closer to the edge of the canyon itself. 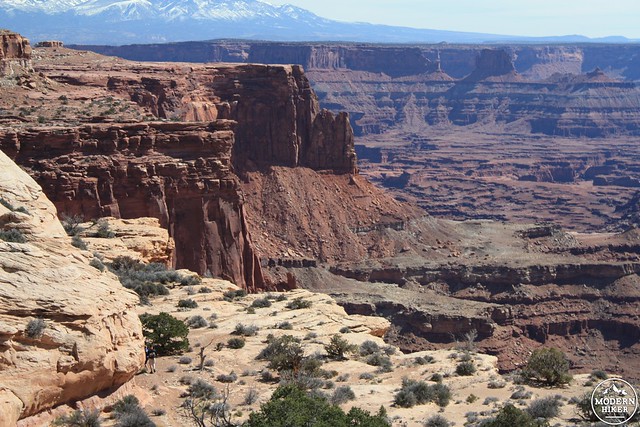 At about the 2.3 mile mark, the trail looks like it just gives up and makes a dash for the edge of the cliff – but in reality there’s just a short scramble to the next layer of canyon. From here, the trail makes a sharp turn back to the southwest and hugs the edge of a relatively small mesa, offering million dollar views of the canyon and White Rim Road beneath you. 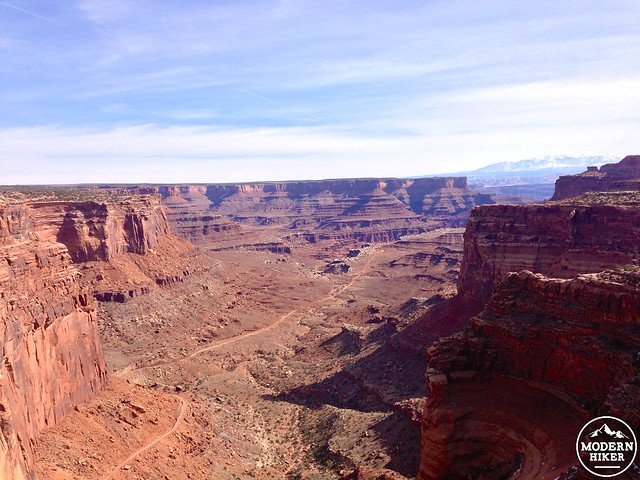 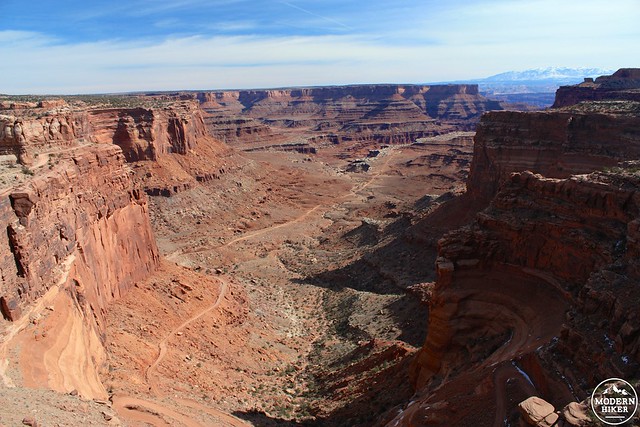 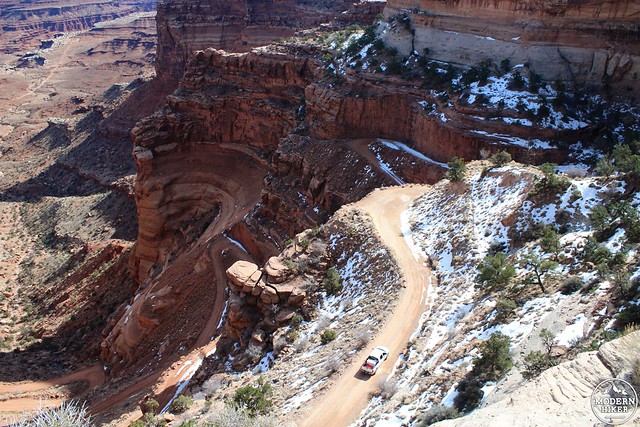 At just under 2.6 miles, the trail reaches a small promontory that serves as an excellent break or turn-around spot if you’re just doing a day hike. You can, however, continue if you’re feeling energetic – it’s another 2.5 miles to the White Rim Road – at which point you can continue down a 3.6 mile long fire road to the banks of the Colorado River or turn south to camp in the shadow of Airport Tower at one of four small primitive campgrounds (permit required). If you do head down to the 4WD road, you’ll also have 1683 feet of elevation gain on the way back up.

Any way you cut it – you can’t ask for a better introduction to Canyonlands than this.

Word of caution if you do continue – this area was also heavily mined for uranium in the 1950s. There are mine shafts that should definitely not be explored – as well as springs that may have been contaminated by the uranium. Most dangerous springs or mine shafts are marked with the classic yellow-and-black radioactivity sign.

Very good. There is a clear single-track trail from the road to the edge of the canyon. After that, it's slickrock trail with cairns marking the way.

There are 12 first-come, first-served sites at Willow Flat Campground further in the park. If you are trekking deeper into Lathrop Canyon, there are four primitive campsites (Airport A-D) south from the junction of the Lathrop Trail and White Rim Road (Permits required). The closest reservable camping is at nearby Dead Horse Point State Park.

From Moab, head north on US 191 for about 11 miles. Take a left onto UT-313 west and drive 14.6 miles. Continue straight onto Grand View Point / Island in the Sky Road for another 8.1 miles (stopping at the Visitor Center for an entrance pass / maps / advice, of course!). The trailhead will be on your left.

[…] be found in the names of peaks, valleys, and trails today. The Island in the Sky District’s Shafer Canyon was named for a herder there, but here in the Needles District the largest operators were the […]