If you’re even remotely interested in history, Mexico City has something for you. The site has been inhabited by advanced civilizations since 1325 and by the time the first Europeans stumbled into the region, the Aztec city of Tenochtitlan had somewhere between 100 and 200 thousand people living within its fully planned borders.

However, just north of Tenochtitlan, the even more ancient city of Teotihuacan was founded some 1500 years prior as another planned city – and most archeologists estimate at its height it was the largest city in the pre-Columbian Americas with a population of some 125,000. The city declined over the following years but maintained an important role in the religious traditions of the region – so even though parts of the city were destroyed and the city itself was abandoned (though experts differ on whether it was from an outside invasion or internal uprising), many of the ruins remain in excellent condition. The pyramids were designated a UNESCO World Heritage Site in 1987 and today they are the most-visited archeological site in the country of Mexico.

The pyramids are about 30 miles northeast of Mexico City and easily reached by car, taxi, or bus. While not a hike in the traditional sense, visitors to Teotihuacan can expect to do quite a bit of walking outdoors – and, if they want, can climb to the top of the 246 foot tall Pyramid of the Sun (as well as partially up the nearby Pyramid of the Moon).

If you’ve never been to a National Park outside of the United States, you should be warned that they’re not the idyllic unspoiled wilderness experiences that most of us have become accustomed to. National Parks in Mexico (and in most other parts of the world, actually) often feel more like tourist attractions – complete with tchotchke-packed visitor centers, themed restaurants, and vendors vying for your attention throughout the park. Still – as long as you just realize that not everyone does things the way we do (a helpful lesson in many walks of life, I think), a visit to Teotihuacan will be a memorable and enjoyable part of your trip to central Mexico.

If you take the bus from Mexico City, you’ll arrive at the site’s southern entrance. Before you see anything at the park, you’ll have to pass through a built-up tourist section full of souvenir shops and snack foods – but you’ll get a few glimpses at what awaits you from a few displays along the way. 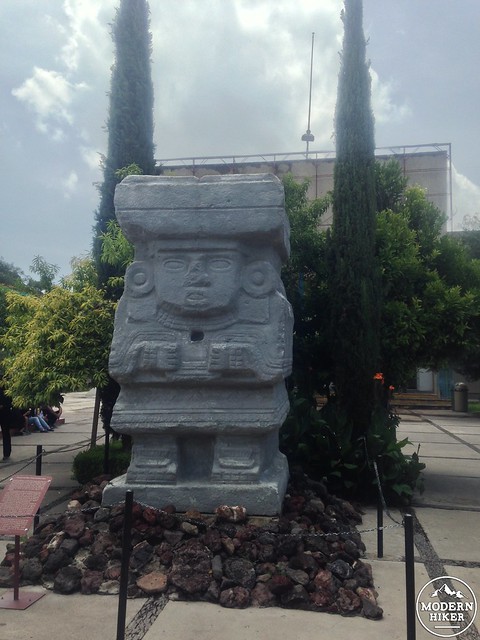 Pass the restrooms and restaurant, the central plaza of the park opens up to wide vistas and you’ll quickly realize any trouble you might have had getting to the site itself was completely and totally worth it.

Here, you’re standing at the southern end of the Avenue of the Dead – the city’s main boulevard. This road was laid out to be exactly perpendicular to the massive Pyramid of the Sun, which itself had its angles planned based on the position of the sun at its zenith at two important dates on the Mayan calendar. The entire city is laid out on this axis – the citizens even altered the flow of of the Rio San Juan to adhere to their grid.

Directly across from the southern entrance is the Temple of Quetzalcoatl – a small but intricately detailed step pyramid that lies beyond a low earthen wall to the east. Head here first or turn north to walk along the Avenue of the Dead. 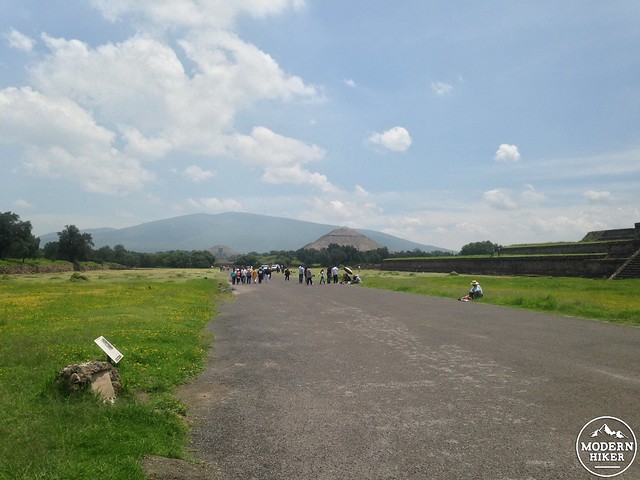 From nearly everywhere in the park, you’ll be able to see the Pyramid of the Sun looming over you. Walking along the now mostly barren Avenue it’s easy to imagine what an imposing and impressive presence it must have been to the people who lived in the city.

As you continue heading north on the Avenue the street will rise and enter several large open plazas. Some of these pyramids and buildings have been restored and rebuilt, while others have been left as open-air ruins and many more are still remain buried under the soil. 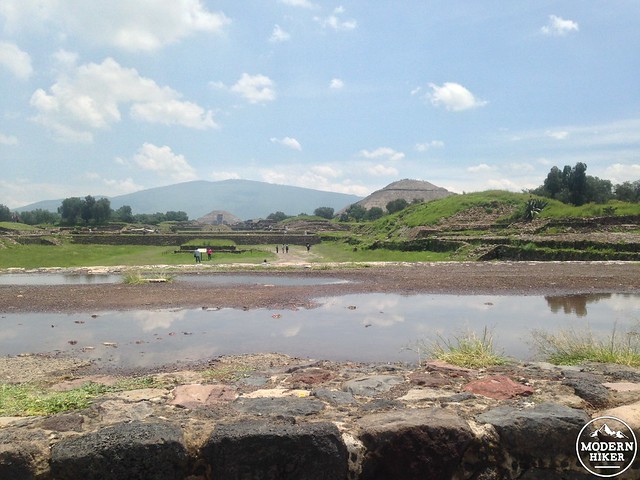 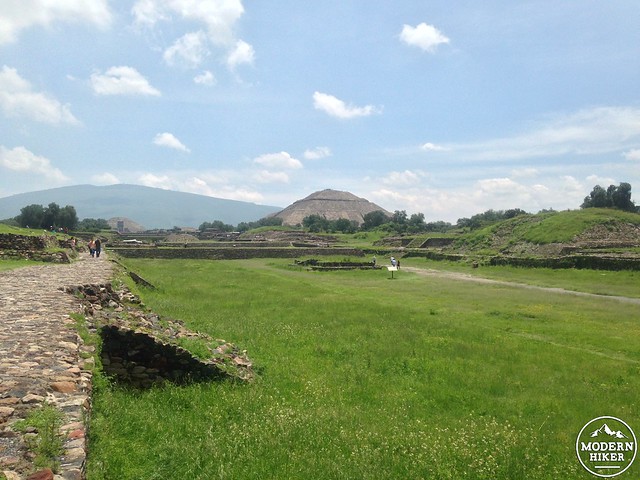 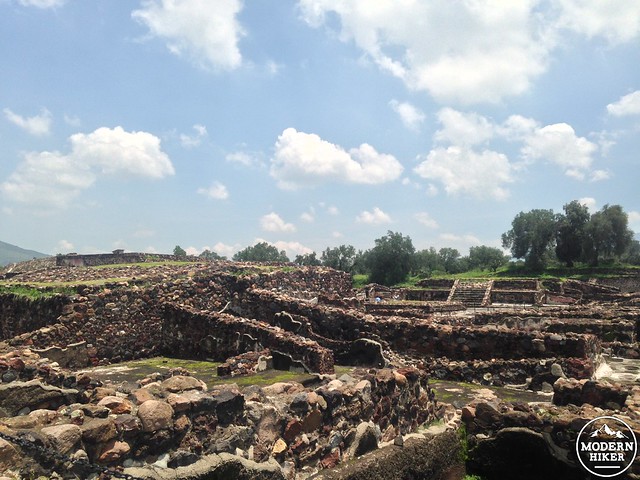 Many of the areas to the side of the Avenue are blocked off from pedestrians but a surprising amount of the ruins are accessible, so feel free to add some extra elevation to your walk by scaling the smaller pyramids and structures that line the plazas.

In a short while, you can leave the broad Avenue and follow a well-defined footpath leading toward the Pyramid of the Sun to your right. 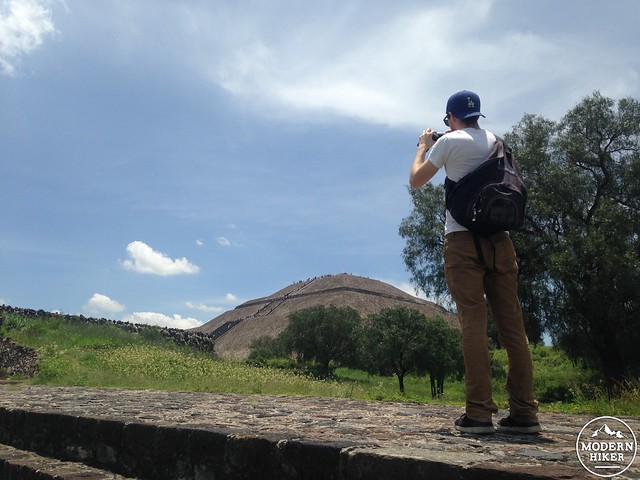 The name “Pyramid of the Sun” comes from the Aztecs, but they only came to Teotihuacan several hundred years after the city was abandoned so the original name of the structure remains unknown. As it was originally constructed, the Pyramid rose 246 feet high and measured 738 feet across, making it the third-largest pyramid in the world by volume.

In its heyday, the pyramid was topped with a ceremonial altar and its edges were covered in smooth plaster and painted with colorful murals, none of which survive today.

Modern visitors will see a partially (and incorrectly) reconstructed pyramid – but while the modern architects didn’t get all of the details right, they did allow us to climb up a very steep staircase to the summit for an incredible, sweeping view of the ancient city. 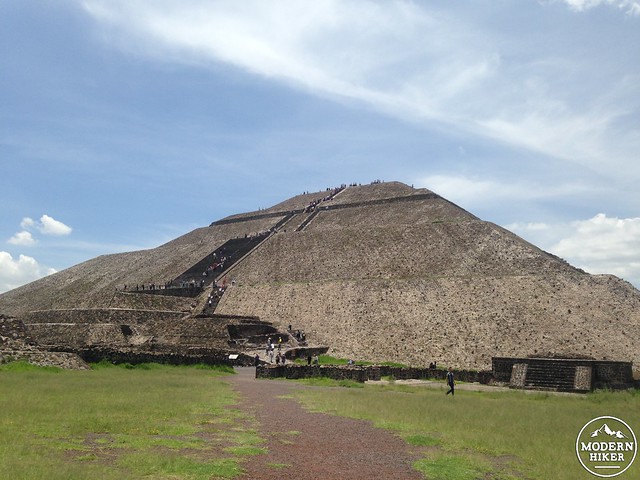 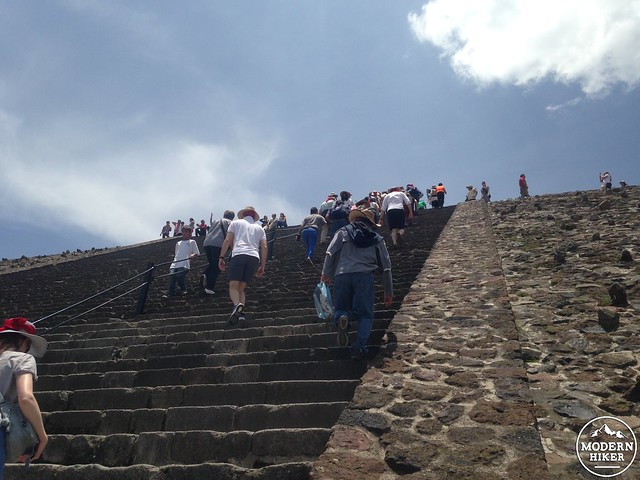 It should be noted that while you’ll likely see people of all ages and abilities climbing the pyramid (and really, I strongly encourage you to give it a shot), the steps are very steep and often crowded. If you have a fear of heights or vertigo, you may want to consider admiring the structure from afar instead – otherwise, take it slowly on the ascent and even more slowly on the descent, as the stairs are often uneven. 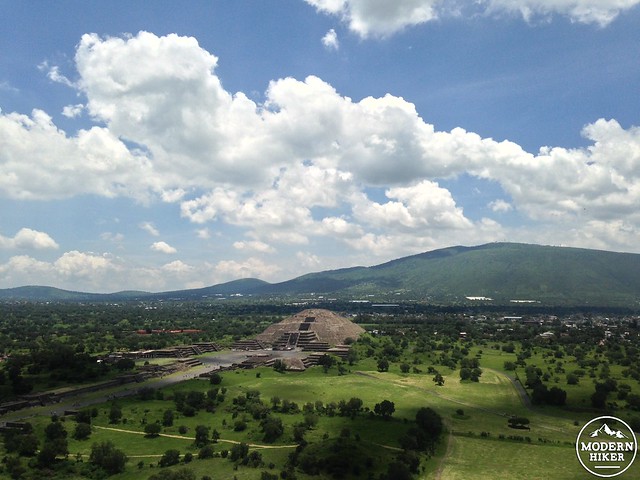 The nearby Pyramid of the Moon to the north

After you’ve soaked in the views from the top of the Pyramid of the Sun, carefully scale back down the staircase to the grand Plaza of the Sun at the base of the Pyramid and turn toward the north to continue on the Avenue of the Dead. 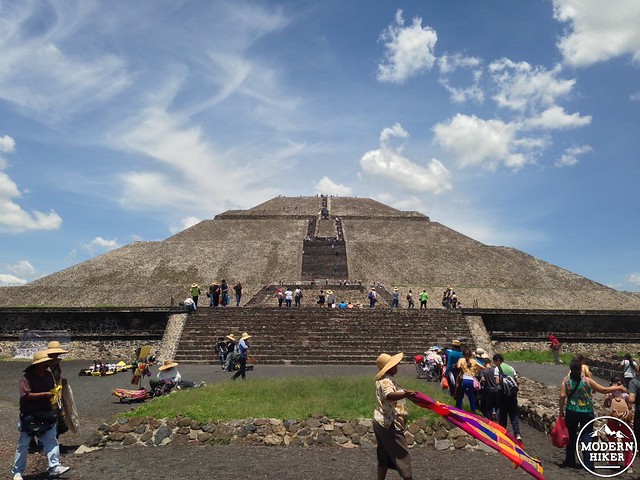 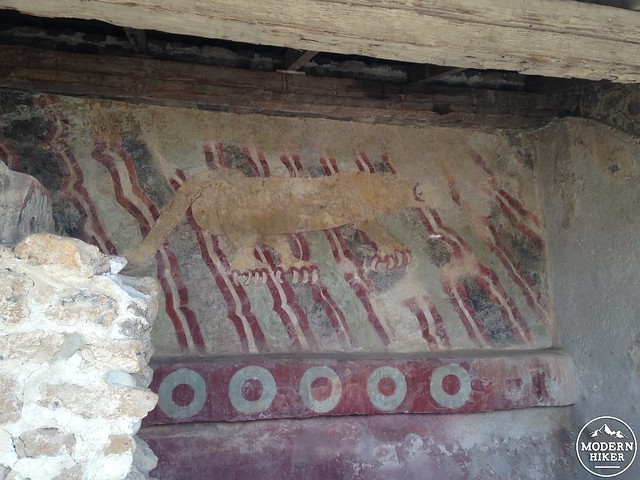 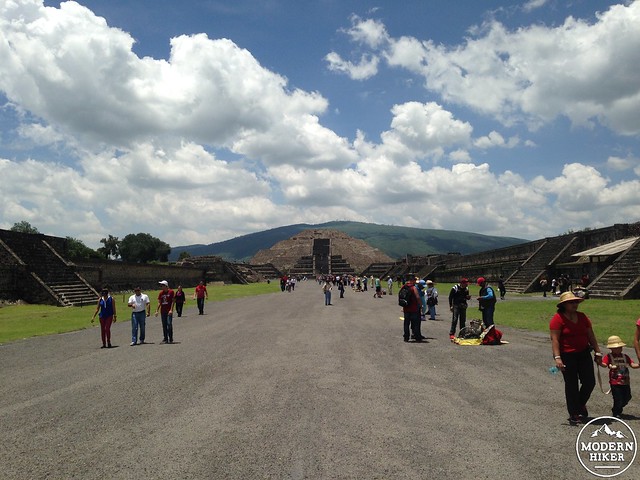 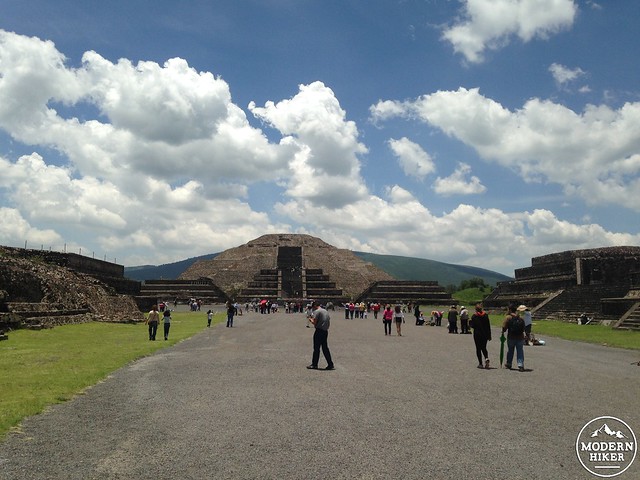 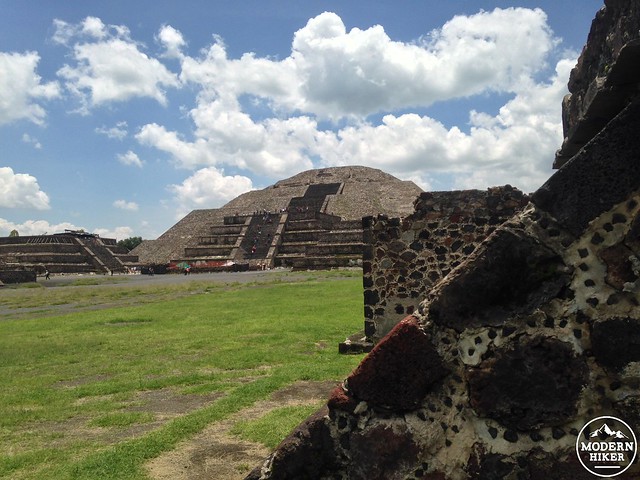 You can’t climb to the top of the Pyramid of the Moon but you can reach the first terraced platform if you’d like. The staircase on this pyramid is even more steep than that of the Pyramid of the Sun, but the views looking down the entire excavated length of the Avenue of the Dead are well worth the effort. 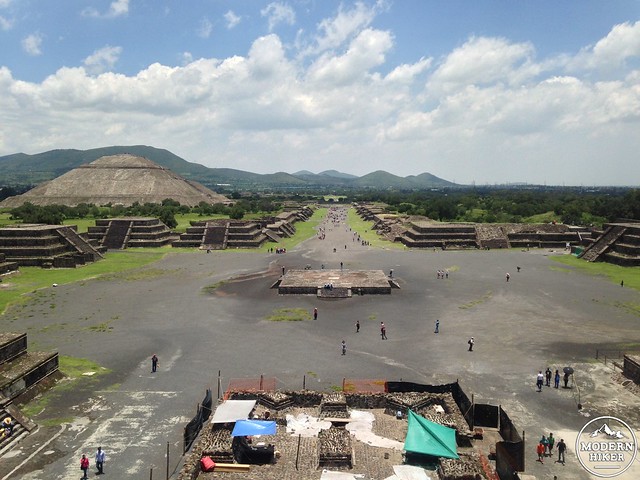 This pyramid is also a great place to see the various levels of excavation at the site – as well as appreciating just how much of the site remains left to be uncovered. What you see when visiting the Teotihuacan comprises only about 10% of the actual area of the historical site, and you may see archeologists restoring new structures or digging out pyramids covered in layers of soil and plants. 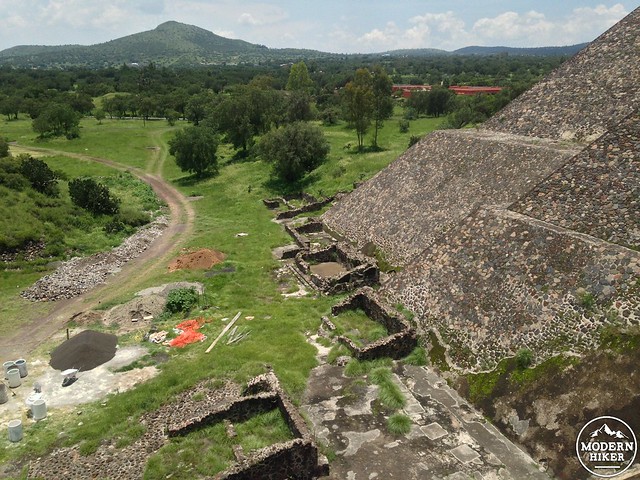 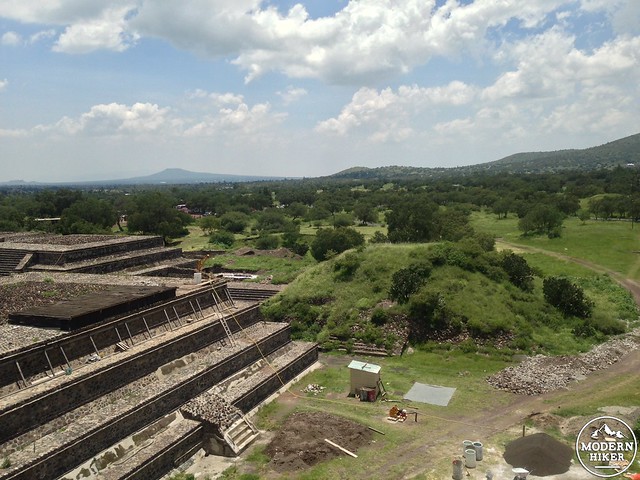 The area of Teotihuacan that has yet to be excavated is so large that the development of the nearby modern settlement often runs into conflict with the ancient site. Just a few years ago, Wal-Mart ran into trouble when it was discovered that construction workers on a new store in the shadow of the ancient pyramid had not only uncovered artifacts from the site – but it had disposed of those artifacts and bribed local officials to keep the whole thing under wraps.

When you’re done imagining the ancient people who lived and walked where you’re standing right now, return back down the Avenue of the Dead and pass the Plaza of the Sun. Before you cross the river, take a left to head east to the site’s museum, which houses an excellent collection of well-preserved artifacts from the city, including statues, jewelry, bones, and a huge model of what the city may have looked like in its prime. 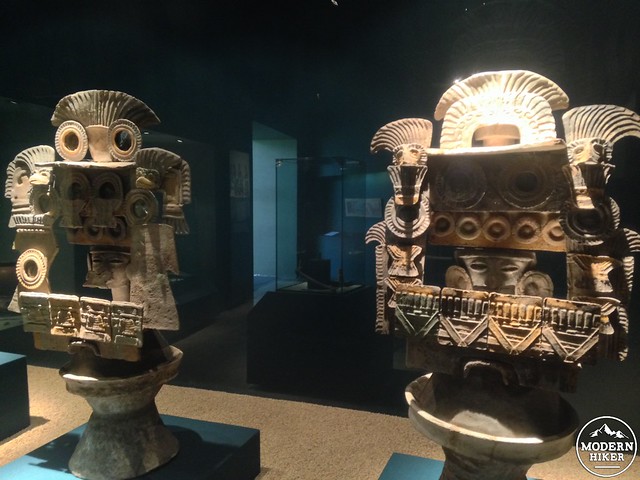 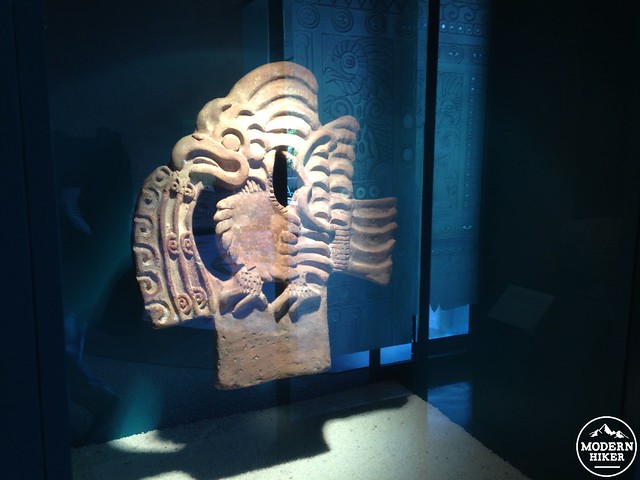 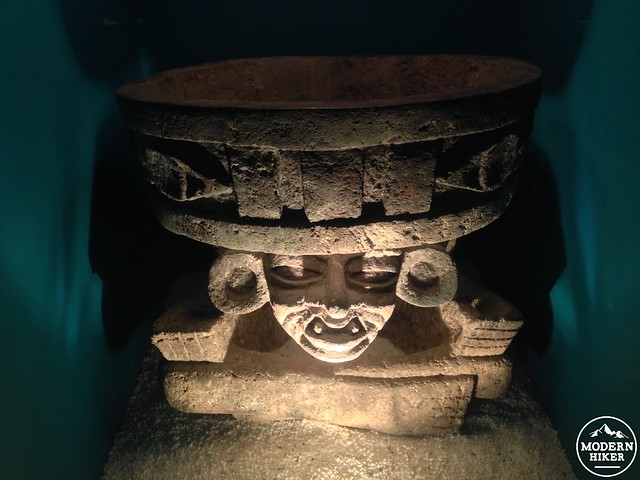 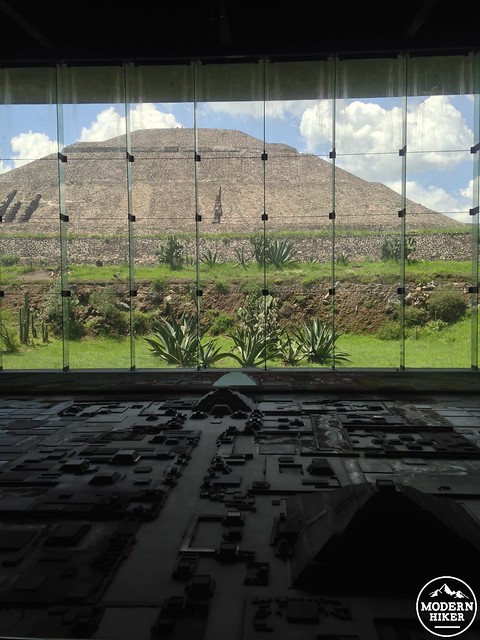 Also, if you live in the Los Angeles area, LACMA is running a small but incredible exhibition called The Painted City: Art from Teotihuacan now through January 4, 2015. The exhibition collects artwork from Teotihuacan and other areas of ancient Mesoamerica and is well worth a visit to the museum. Airfare from L.A. to Mexico City isn’t that expensive, but admission to LACMA is definitely cheaper! 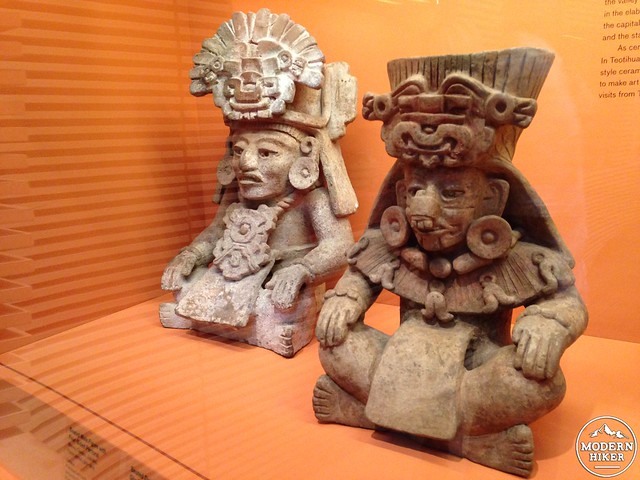 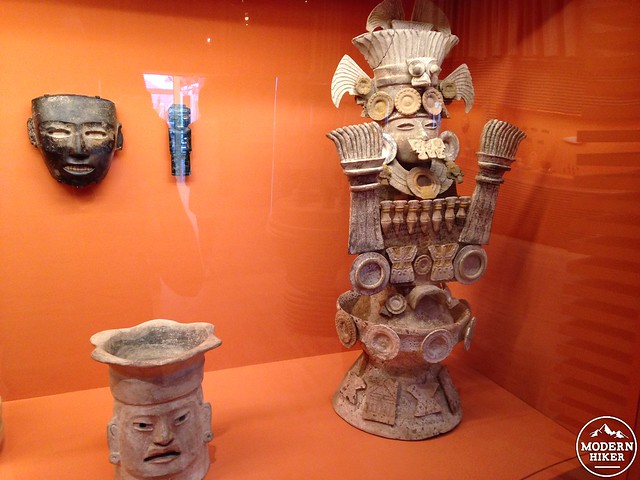 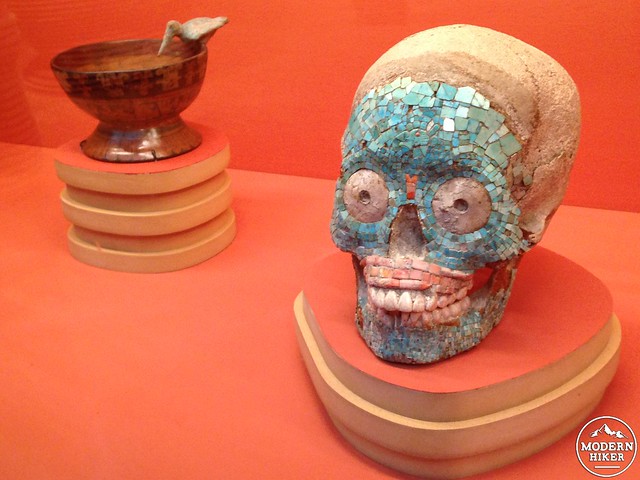 This National Park is a large archeological site. There are no established trails in the traditional sense, although if you want to see the complete site, climb the pyramids, and visit the museum you'll definitely do a lot of walking. BRING SUNSCREEN and WATER - there is no shade inside the park and even if it's cloudy in the morning, there's a good chance you'll be walking through some unforgiving direct sun later in the day.

From Mexico City, drive north on Mexico 85 and take the exit toward Mexico 132D. Continue for 18.2km and take the exit for the Piramides. Follow the signs to the entrance of the National Park. At the time of writing, entrance to the park was 59 pesos (less than $5 US). Transit accessible from D.F.'s Northern Bus Station - private lines operate to and from the site. Look for the line with the pyramid logo. Roundtrip tickets run about 42 pesos ($3 U.S.).

Just trying to make the best use of my time on the planet is all :)

Somebody is having quite the summer. ; )