Well off the beaten-path, Natural Bridges National Monument may not be on your must-visit list of Colorado Plateau destinations, but it is definitely worth a visit. Declared in 1908, this small park system unit was the first National Monument in Utah – but was reachable only by three day horseback ride from Blanding, Utah until paved roads reached the area in the 1970s. The park features three impressive natural bridge formations, which are all viewable from short hikes off the park’s one paved road or better viewed up-close on this incredibly fun loop trail.

The trail begins near the overlook for Sipapu Bridge, named for a Hopi term for a gate spirits pass through on their way to the underworld. Spanning 225 feet, Sipapu Bridge is currently the 8th longest known arch and 5th longest natural bridge in the world (some Park literature still claims it as the second largest, although new discoveries and more accurate measurements seem to be constantly updating those superlatives). The bridge is visible from the side of the road, deep in the canyon. 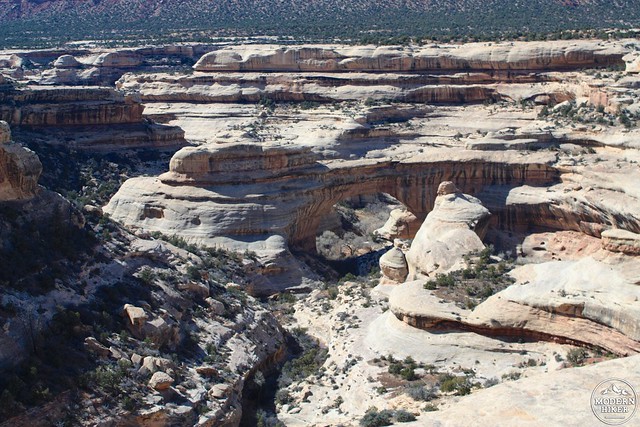 While Sipapu may not be the biggest natural bridge in the world, it does have the distinction of being the longest natural arch in the world with a trail that lets visitors pass underneath it (Arches National Park’s Landscape Arch used to hold this title until a number of rockfalls closed the trail in the early 1990s. To take advantage of that opportunity, descend into the canyon via the steepest trail in the park – you’ll drop 500 feet in 0.6 miles descending down two staircases and three ladders.

Head down the two steel staircases and first short ladder to start this adventurous hike. 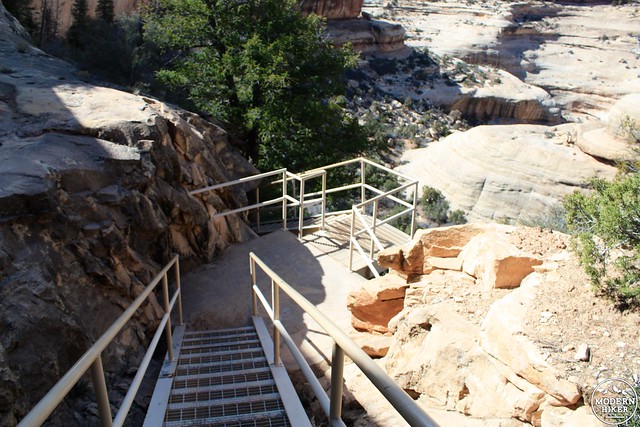 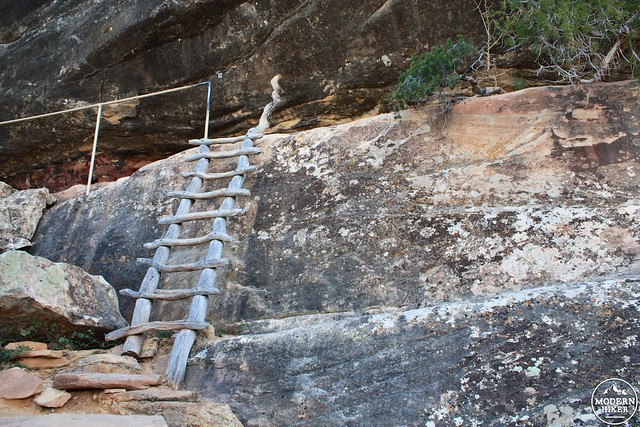 If you are spooked of heights but still just wanted a better view of Sipapu than the roadside overlook allows, about a third of the way down the trail hugs a narrow ledge against the rock wall. There are excellent views of the bridge from here, and you can turn back if you’ve had your fill. 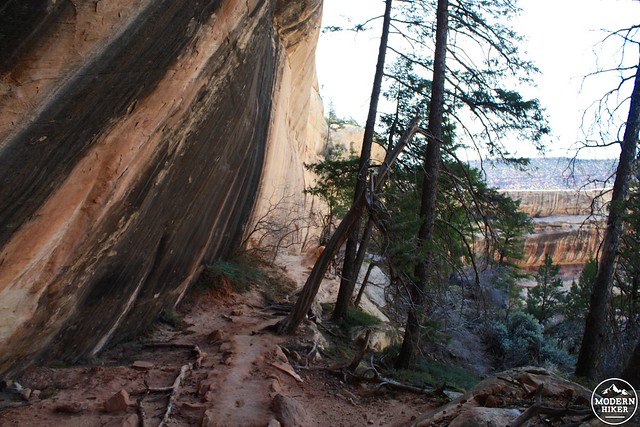 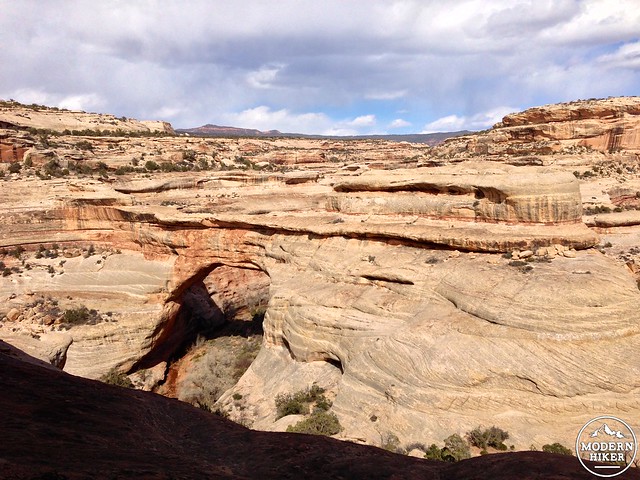 The more adventurous should continue pressing on, though. The last 0.2 miles are the steepest and most exposed portion of this trail, and you may need to use your hands as well as your feet to make your way down. There are steep switchbacks and two more ladders – but when you get to the canyon floor I promise you the views of this epic and incredible natural bridge will be worth every ounce of effort you’ve expended.

Hike beneath Sipapu through a lovely native oak grove (and to say you’ve done it!) then turn around to continue on the loop trail to the other bridges.

This loop route is primitive and unmaintained, so you’ll have to keep your eyes out for prevalent footpaths and rock cairns marking the way. Depending on the time of year you’re hiking, you may also have to contend with a few water crossings in the canyon – but overall the route-finding isn’t that tough except for one or two spots. If worse comes to worse, just remember: stay inside the canyon.

The trail between Sipapu and Kachina Bridge is a really lovely stretch of canyon hiking. You’ll boulder-hop and meander your way through oak groves and little patches of grassland in the canyon’s riverbed – and make sure to keep your eyes peeled for smaller arch formations hidden in the canyon walls above you. 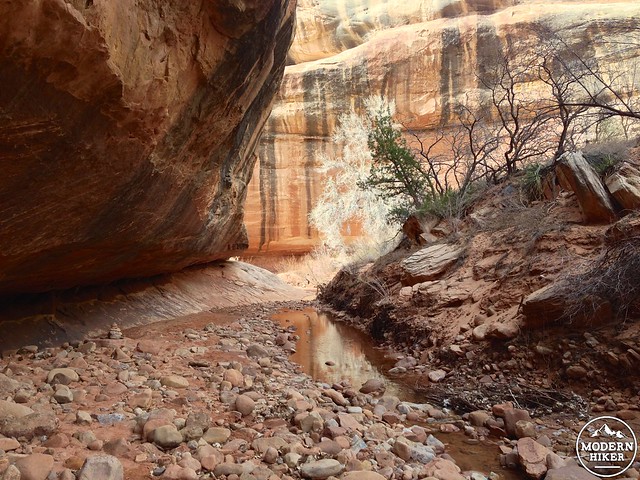 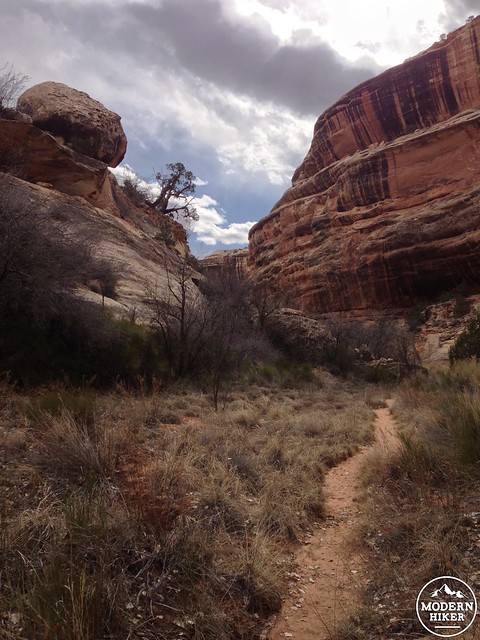 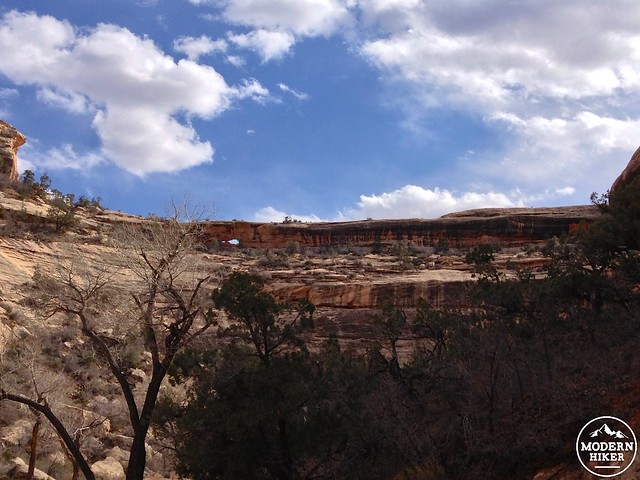 At about the 1.4 mile mark, you’ll pass the confluence with Deer Canyon and some Pueblo ruins in the canyon walls above you (called Horse Collar Ruins, this Pueblo village isn’t very visible from this trail, but can be seen more clearly from a short trail off the paved road along the canyon rim).

Follow White Canyon Creek until Kachina Bridge comes into view at about the 2.7 mile mark. 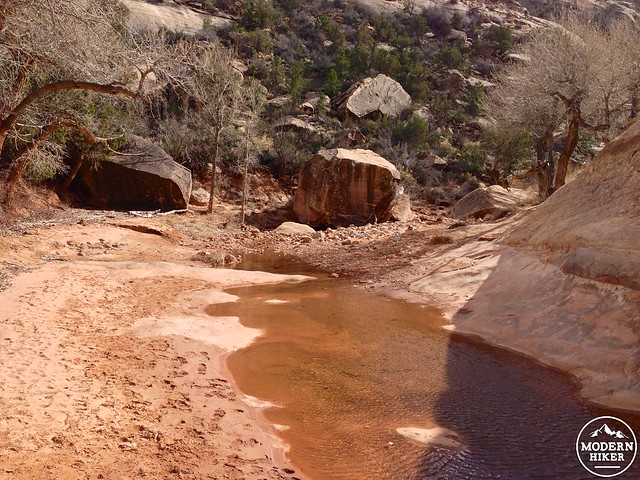 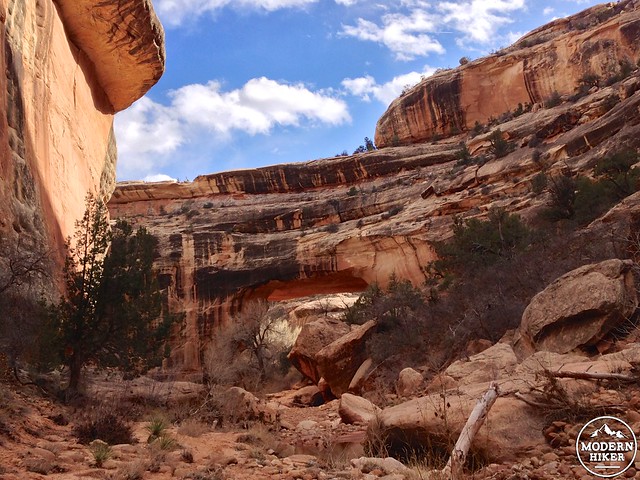 Kachina Bridge is smaller than Sipapu but still pretty impressive. The opening spans 204 feet and is 114 feet tall – made larger when 4000 tons of sandstone fell from the opening in June of 1992. The rubble from that event is still clearly visible. 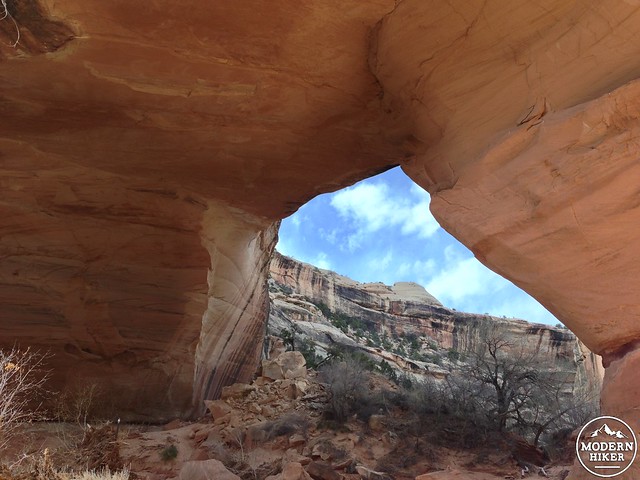 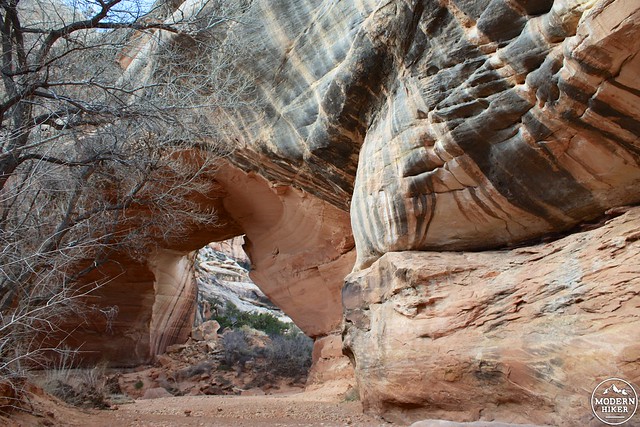 There are also several pictographs and petroglyphs located near this bridge, including one that young earth creationists have attempted to claim is evidence of a dinosaur living at the same time as humans (spoiler: it isn’t).

I’ll be honest – I tried to look for the rock art here but unfortunately couldn’t spend too much time as I was racing the sunset. However, I did find this excellent Flickr set of pictographs and petroglyphs from the region, including several great shots of the work near Kachina Bridge.

As you can see, most of the art is faint and very subtle – so if you are planning on seeing it just be sure you have some time to spend in the area. 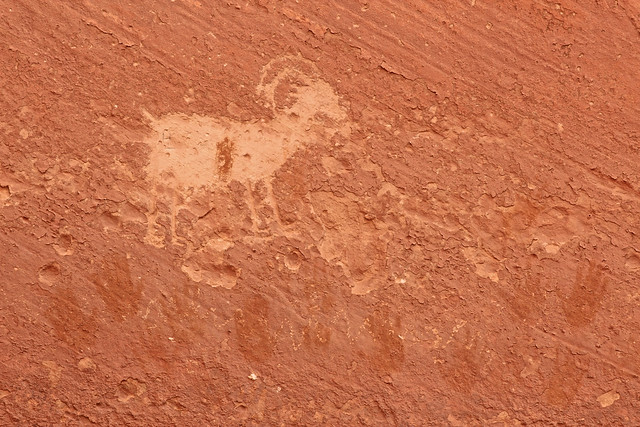 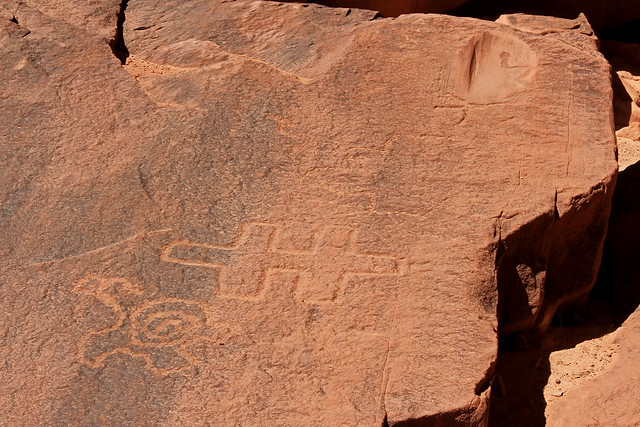 Past Kachina Bridge, continue heading south and at the 3 mile mark you’ll see a signed trail that seems to be leading up and out of the canyon. If you stay inside the canyon, you’ll be able to hike another 0.2 miles before you hit “The Knickpoint,” a canyon pour-off that becomes a raging red waterfall during rainstorms. 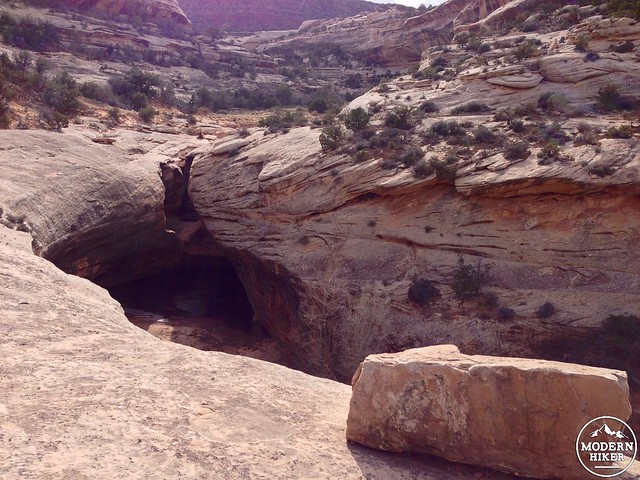 view from the proper trail above the Knickpoint

On this GPS track, I stayed in the canyon to see the Knickpoint, but you can take 0.4 miles off the journey by sticking to the trail instead. The trail here also has the option of fully ascending back to the road, but you’ll take the marked route toward Owachomo Bridge instead.

This section of trail ascends above the canyon floor for a bit (bypassing that pesky Knickpoint!) so you’ll be gaining a bit of elevation and also be hiking across some rougher sections of trail. Some portions are on steep slickrock that drops into the canyon below, while other sections will have you hiking through a bit of sand or scrambling up some bouldery inclines. It’s all manageable stuff, though – just take your time and keep your eyes peeled for those ever-present cairns marking the way. 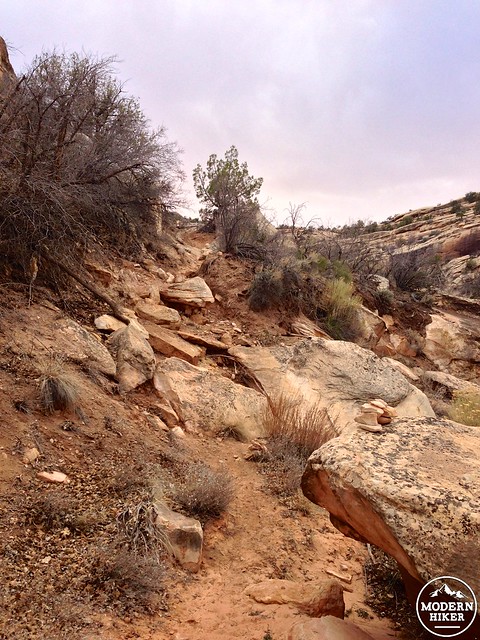 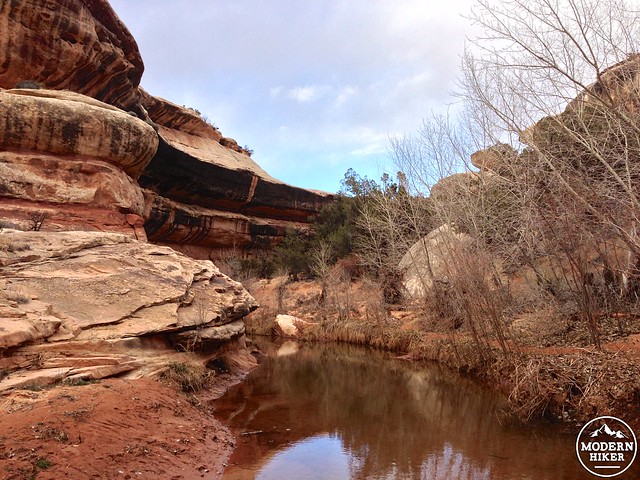 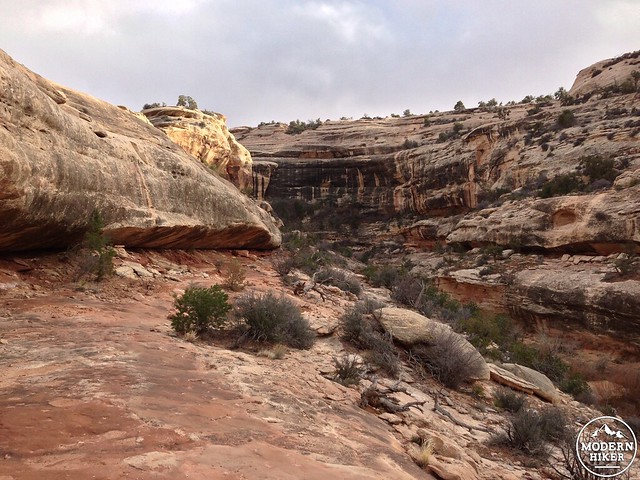 At about the 6.2 mile mark, the canyon makes a sharp turn toward the east and you’ll catch your first glimpse of Owachomo. 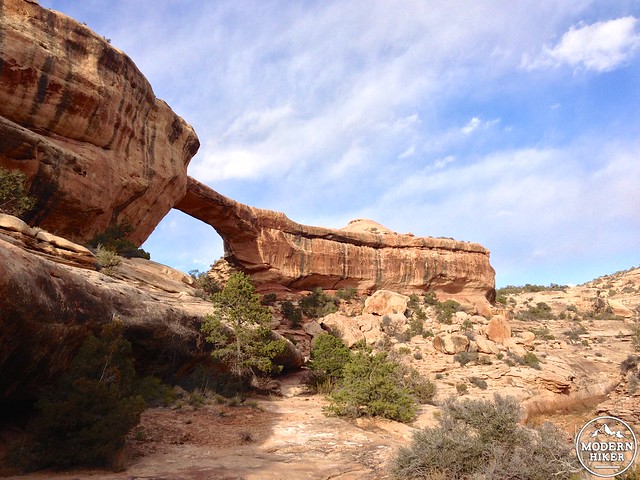 Owachomo is the smallest and thinnest of the three bridges (it’s only 9 feet thick at its thinnest point!) and is thought to be the oldest, although with differing rates of erosion it’s difficult to know for certain.

The trail passes directly underneath the bridge before climbing up a series of stairs cut into the stone to return back to the rim of the canyon.

Once you pass beneath Owachomo, be sure to look back for a truly stunning view. 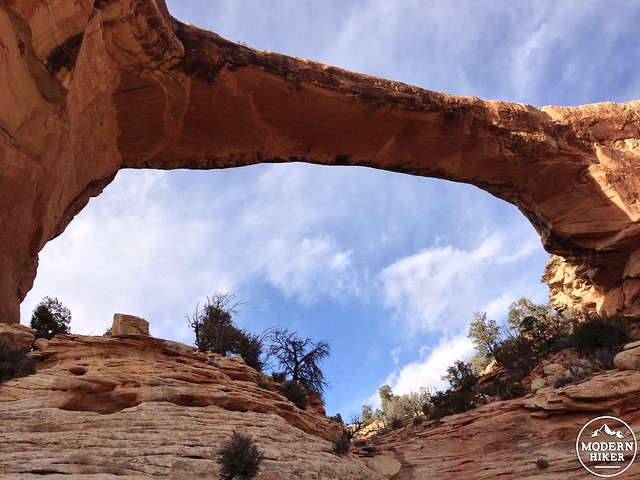 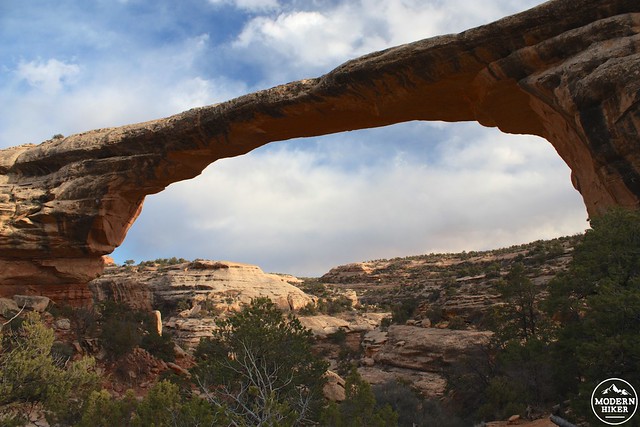 When the Monument was first established, a dirt road led hikers to a ranger station and campground just to the southwest of this bridge. The park’s first custodian Ezekial Johnson would often guide visitors down into the canyon and to the other bridges on foot or horseback, and keen eyes can still make out the remnants of “Zeke’s Trail” just across the canyon from Owachomo.

From here, it’s a moderately steep 0.3 miles back up to the road. If you’ve arranged a car shuttle your hike is over here – otherwise, there’s a lovely 2.1 mile trail that cuts across the center of the Monument and will take you right back to the Sipapu Bridge overlook where your hike began. 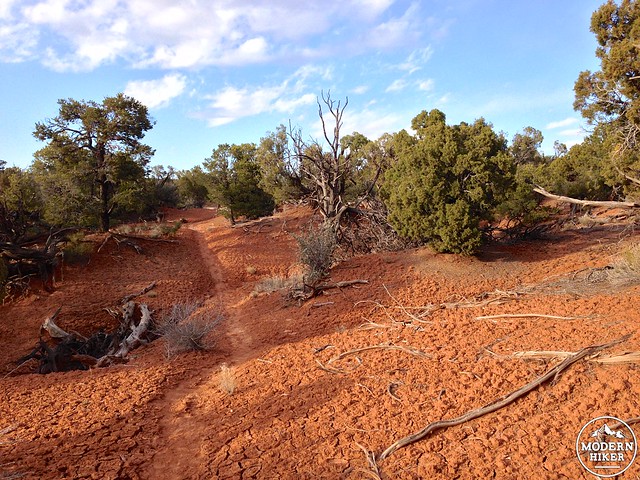 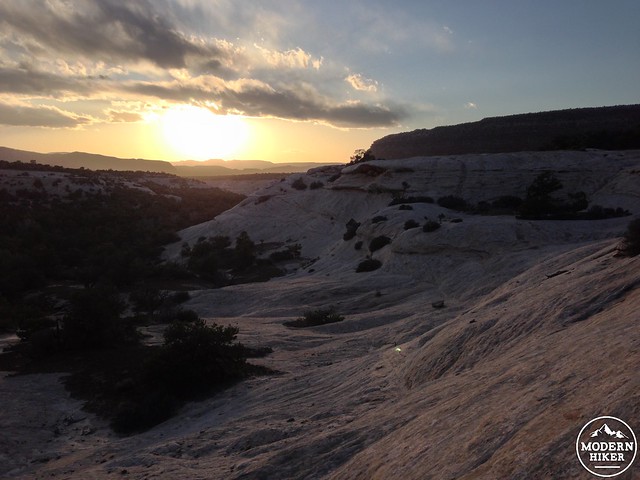 If you are camping in the Monument campground or nearby BLM land, be sure to spend some time outside looking at the stars. In 2006, Natural Bridges National Monument was named the very first Gold Star International Dark Sky Park by the International Dark Sky Association, for not only providing exceptional light-pollution-free night skies but also taking efforts to preserve that natural darkness. It’s a beautiful way to end an exceptional day hike in this often overlooked National Monument.

Good, but rugged. The loop trail meanders along the floors of White and Armstrong Canyons and while they're in good condition, there are also long stretches of primitive trail where you'll have to spot cairns to keep on the right path. Some of the descents into the canyon itself are steep as well - the entry at Sipapu Bridge is the steepest in the park and requires descending a stone staircase and three wooden ladders.

Natural Bridges has one 13-site campground open year-round. All sites are first-come, first-served. In addition, there are some primitive campsites available outside the park on BLM land. The nearest food is in Blanding, about 40 miles away.

The closest city of note is Blanding, Utah. From Blanding, head south on US-191 and turn right onto UT-95 North. Stay on this road for 30.2 miles and turn onto UT-275 N toward Natural Bridges National Monument. Continue into the pay your entrance fee at the kiosk or Visitor Center. The trailhead for this route is off the one-way Loop Drive.

I enjoyed this trip as well. My review goes here: https://ashishb.net/all/hiking-natural-bridges-national-monument/