Moro Rock is a granite exfoliation dome that protrudes over Kaweah Canyon on the edge of Giant Forest. The exceptionally well-engineered trail is carved into the rock, often meandering through tight spaces and over steep stairs before emerging at the top. From the summit, one can see the hazy San Joaquin Valley, Kaweah Canyon, the Great Western Divide, and the rolling, forested country of the Western Sierra. 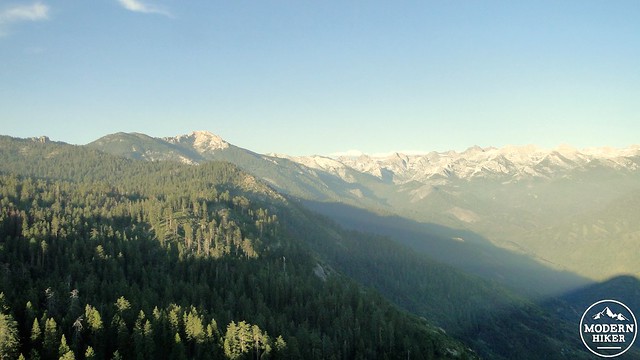 Great Western Divide in the evening

An exfoliation dome occurs when a large chunk of subterranean molten rock rises rapidly to the surface, cooling and crystalizing as it goes. This hunk of molten rock, called a pluton, punches through the overlying rock and emerges as a rounded “dome.” The exfoliation piece occurs as the dome weathers over time. Much like an onion, the various layers of the dome will weather away concentrically, leaving large sheets to “peel off” through erosion from ice, water, and wind. All through this hike, there is abundance evidence of this erosionary force. 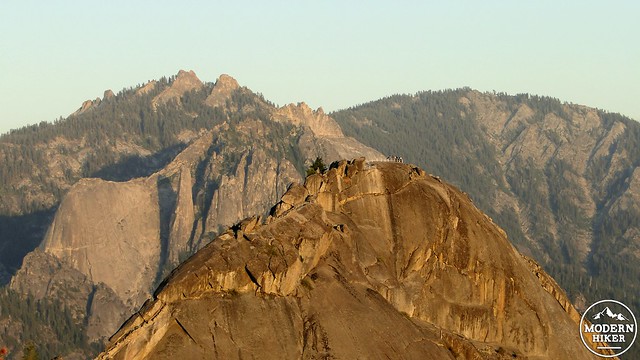 The Sierras are full of these domes, with many of the most famous occurring in Yosemite Valley. Sequoia’s exfoliation domes, with the exception of Moro Rock, are less obvious and accessible, but Moro Rock is as fine an example as you can find, not to mention being easily accessible. The wonderful thing about Moro Rock is that, aside from having to climb 300 feet in a quarter of a mile, this is the quickest and easiest way to view the stunning landscape of the Great Western Divide, a line of 12,000’ peaks dividing the Kaweah River watershed from the Kern River watershed.

Much of the Sequoia experience occurs within forest, but Moro Rock is a great chance to get your head above the trees and take in this spectacular landscape. The other enjoyable aspect of Moro Rock is the opportunity to catch one of those brilliant Sierran sunsets. The summit of the rock offers unparalleled 360 degree views, including to the hazy plains and foothills below. While nobody can say that the smog is a good thing, the silver (or red) lining is that the smog produces fantastic sunsets with a vivid palette of fiery colors. The Giant Forest area offers a number of these sunset spots, including Beetle Rock, Sunset Rock, Hanging Rock, and Little Baldy; however, Moro Rock is the best of all these spots due to the superlative views. 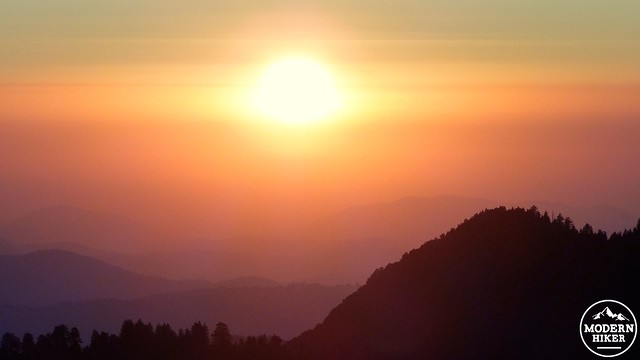 The trail is a straight-forward affair. From the parking area, you will pass by a few information kiosks explaining about the construction of the trail and the geologic history of the rock. Beyond that, you will find a staircase that immediately begins climbing along the east side of the rock. This trail was built in the 1930’s by the Civilian Conservation Corps. The CCC cut, blasted, and poured concrete in wherever possible to create the snaking, vertiginous trail. The trail itself is a marvel of engineering just as much as Moro Rock is a marvel of geology. However, this is not an easy trail for those with a fear of heights. There are guard rails, but frequently those guard rails are all that stand between the hiker and a 1,000 foot vertical fall. 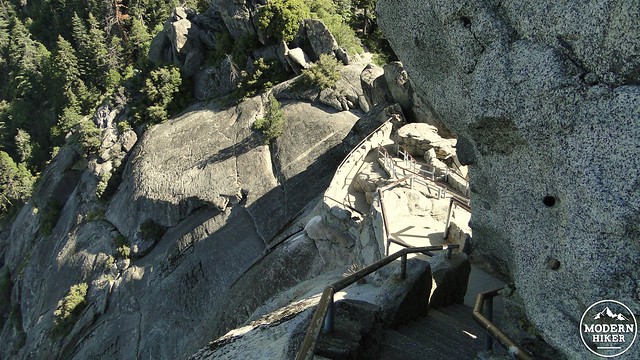 If you’re afraid of heights, you may want to walk in a few hundred feet to enjoy the views of the Great Western Divide. Should you choose to continue on, you’ll not only get the Great Western Divide views, but as you wind through the often narrow and twisted staircase trail, you’ll achieve the views west to the valley, along with the views north over Tokopah Valley, Mt. Silliman, and toward the higher peaks of Kings Canyon. The views west are often disappointing due to air pollution, although on the rare clear days one can see out to the Coast Ranges. Once at the top, you’ll get a strong “top of the world” sensation that comes with climbing peaks, even though this isn’t a traditional peak-bagging experience. The summit is a narrow flat strip with the dome receding precipitously on both sides. Guard rails hem in the traffic, and if you’re comfortable with the heights, you can hunker down and savor the views. 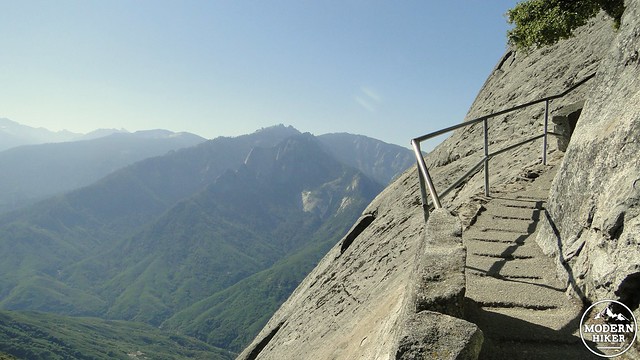 Interpretive signs will point out the various landmarks, including the peaks on the Great Western Divide. Nearby Alta Peak is also prominent in the view, while the Castle Rock formation across Kaweah Canyon, including the sheer depth of Kaweah Canyon itself, inspires no small amount of awe. Once you’ve seen enough, simply return back down the staircase. The trail is very easy to follow. In fact, you would be facing catastrophe by not following it, which would only happen if you deliberately stepped off the trail due to the sheer cliff on either side. 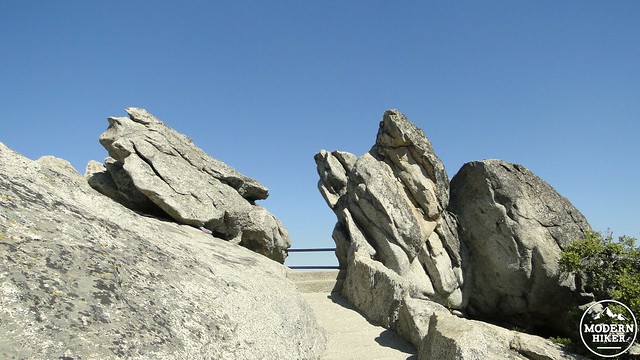 Crags near the summit

After a quarter of a mile, you will return to the parking lot. If it’s still early, you might wish to follow a few of the nearby trails that lead off in different directions. The Sugar Pine Trail leads back to Crescent Meadow. The Moro Rock Trail will pass by Hanging Rock before returning to the Giant Forest Museum. Should you wish to utilize these trails together to make a longer hiking experience, I recommend getting a map at the Lodgepole Visitor Center, as the Giant Forest trailhead can be a little confusing without something to indicate what trail goes where. 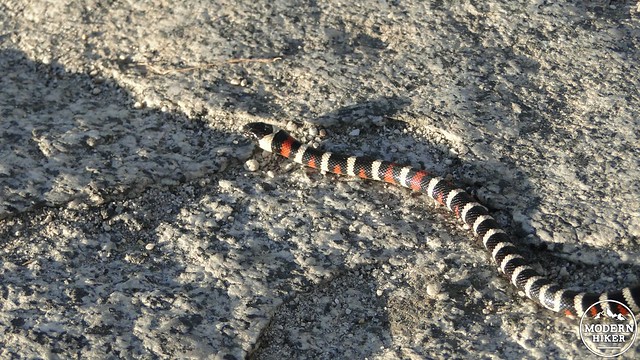 – Given that Moro Rock is an exposed high point, it is subject to lightning strikes from summer thunderstorms. If there is any indication that the weather could turn south, get off the rock immediately to avoid the possibility of getting struck by lightning.

– Moro Rock is also dangerous when covered in snow or during icy conditions. Given how the trail is carved into the side of a rock with 1,000 foot drops on either side, common sense would dictate that this is not a place to practice your snow shoeing skills.

– If sunsets are your thing, you may also want to check out the following spots in the Giant Forest area: Beetle Rock, Sunset Rock, Hanging Rock, and Little Baldy Peak 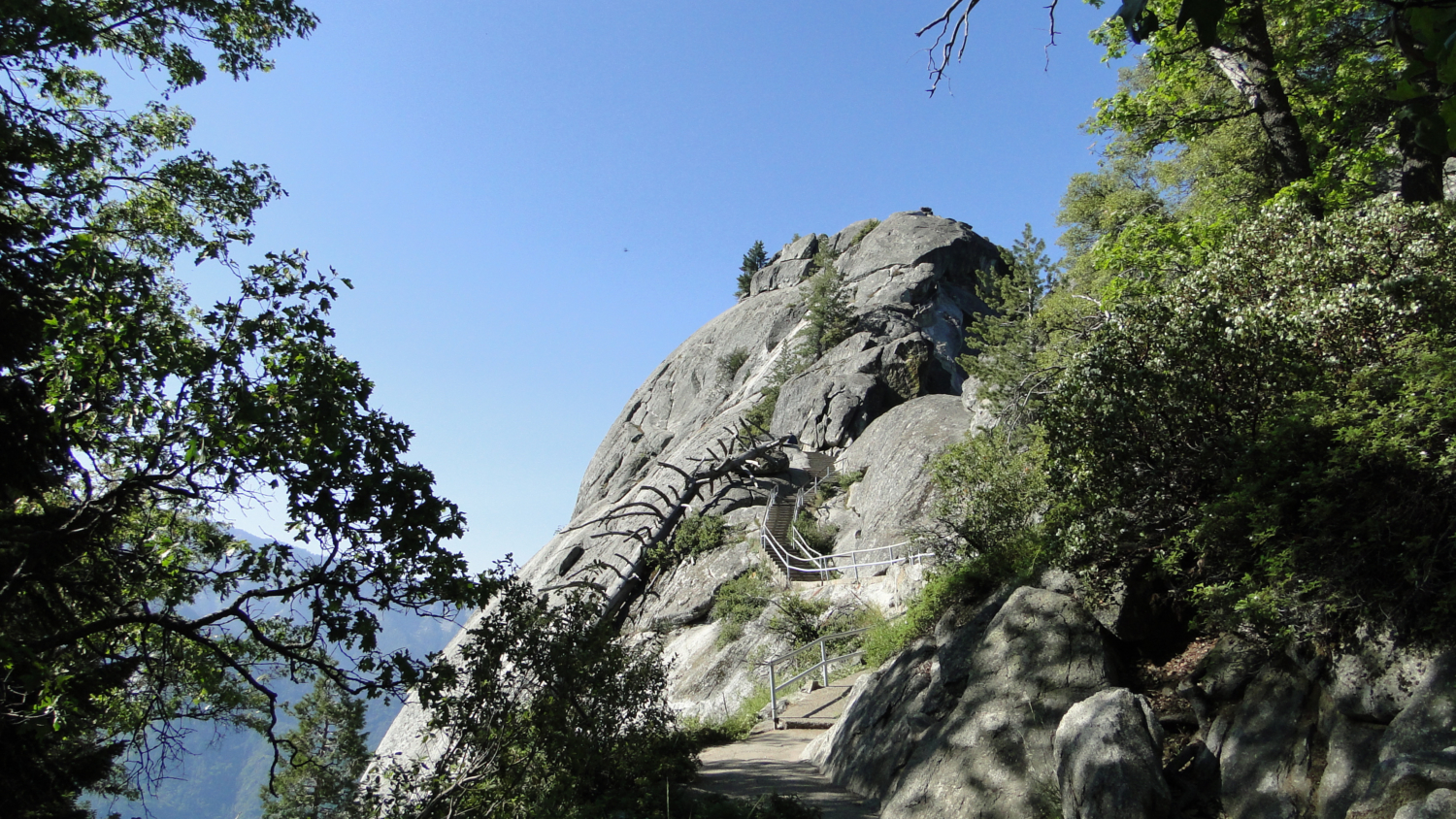 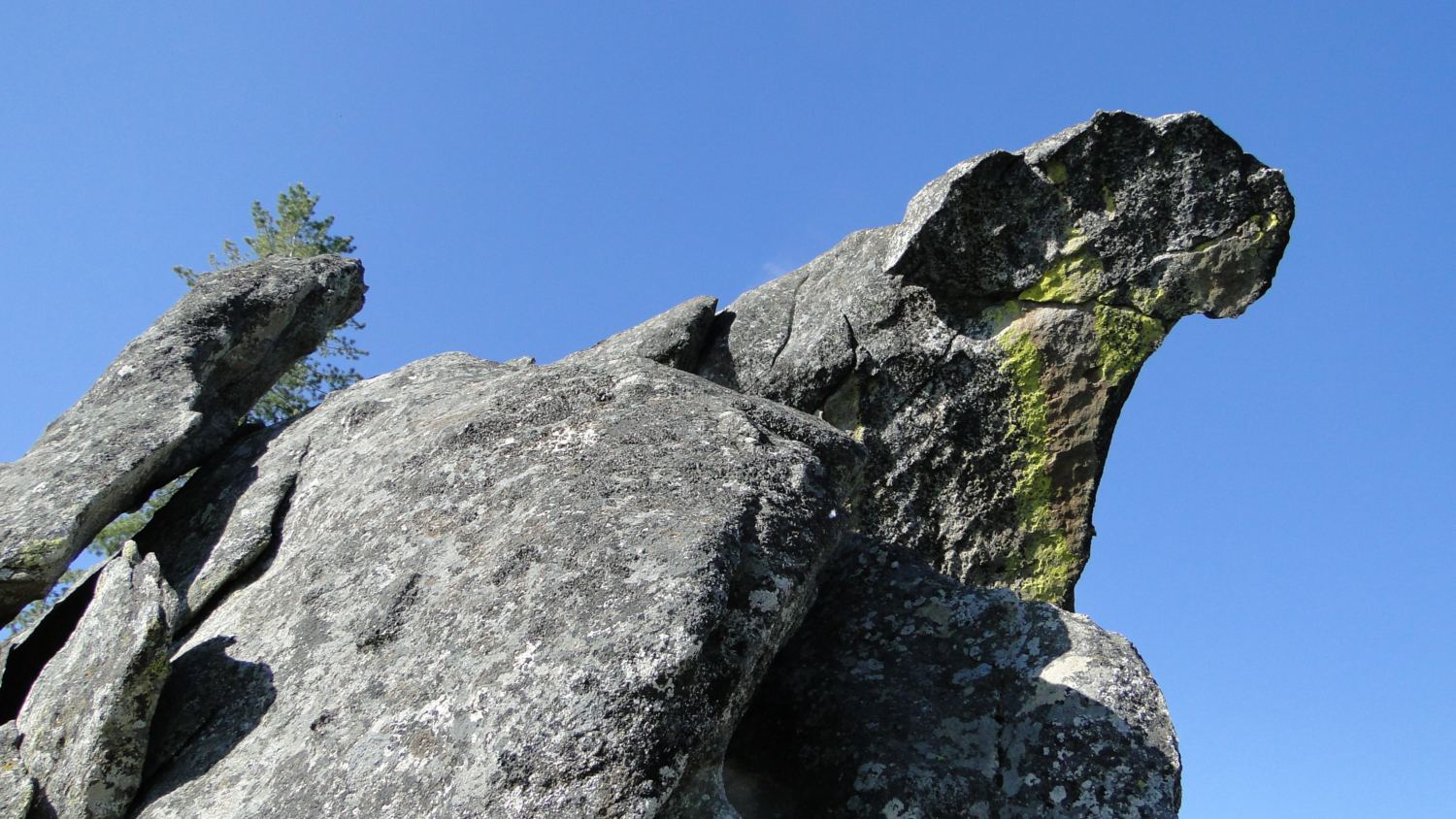 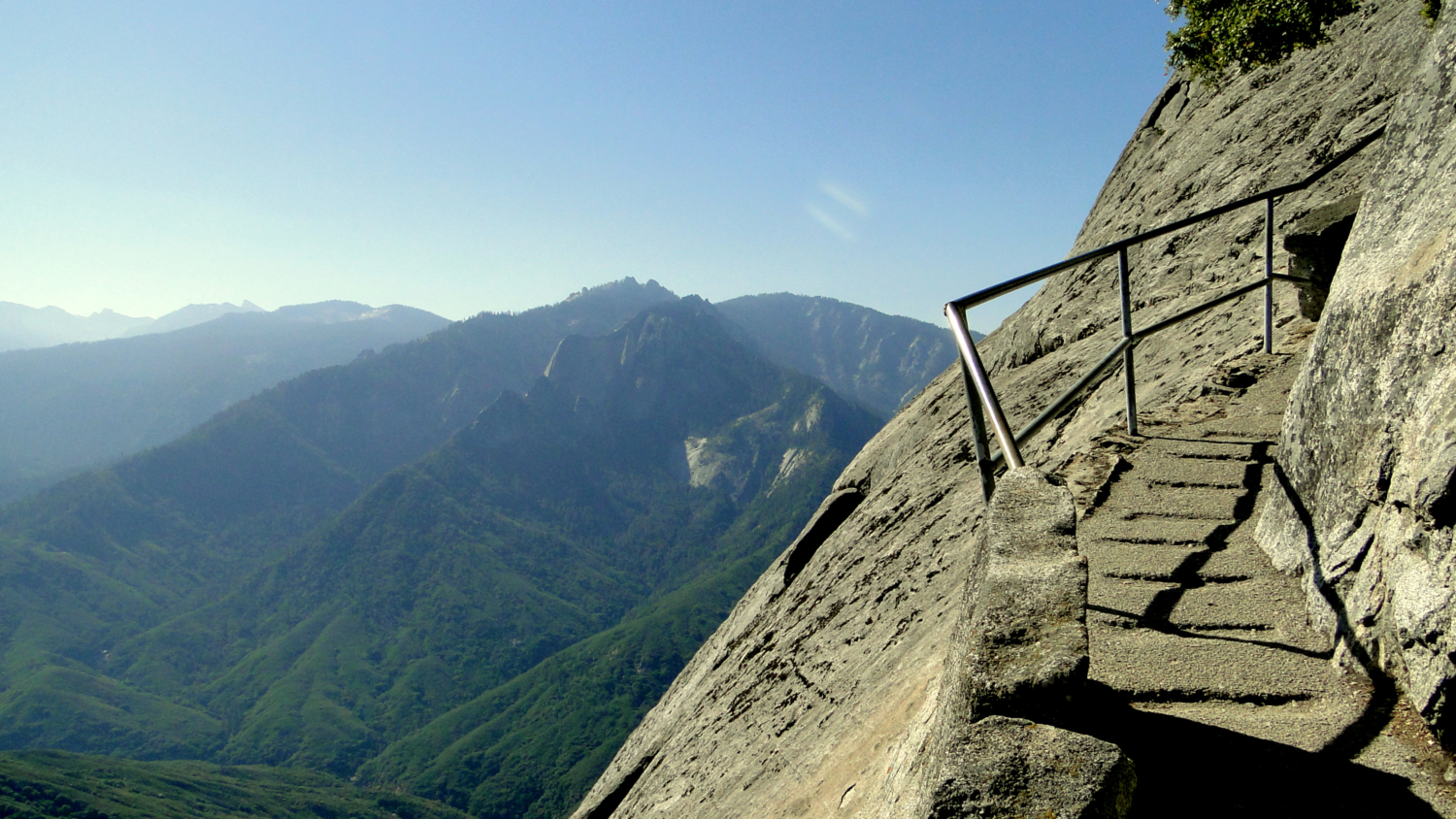 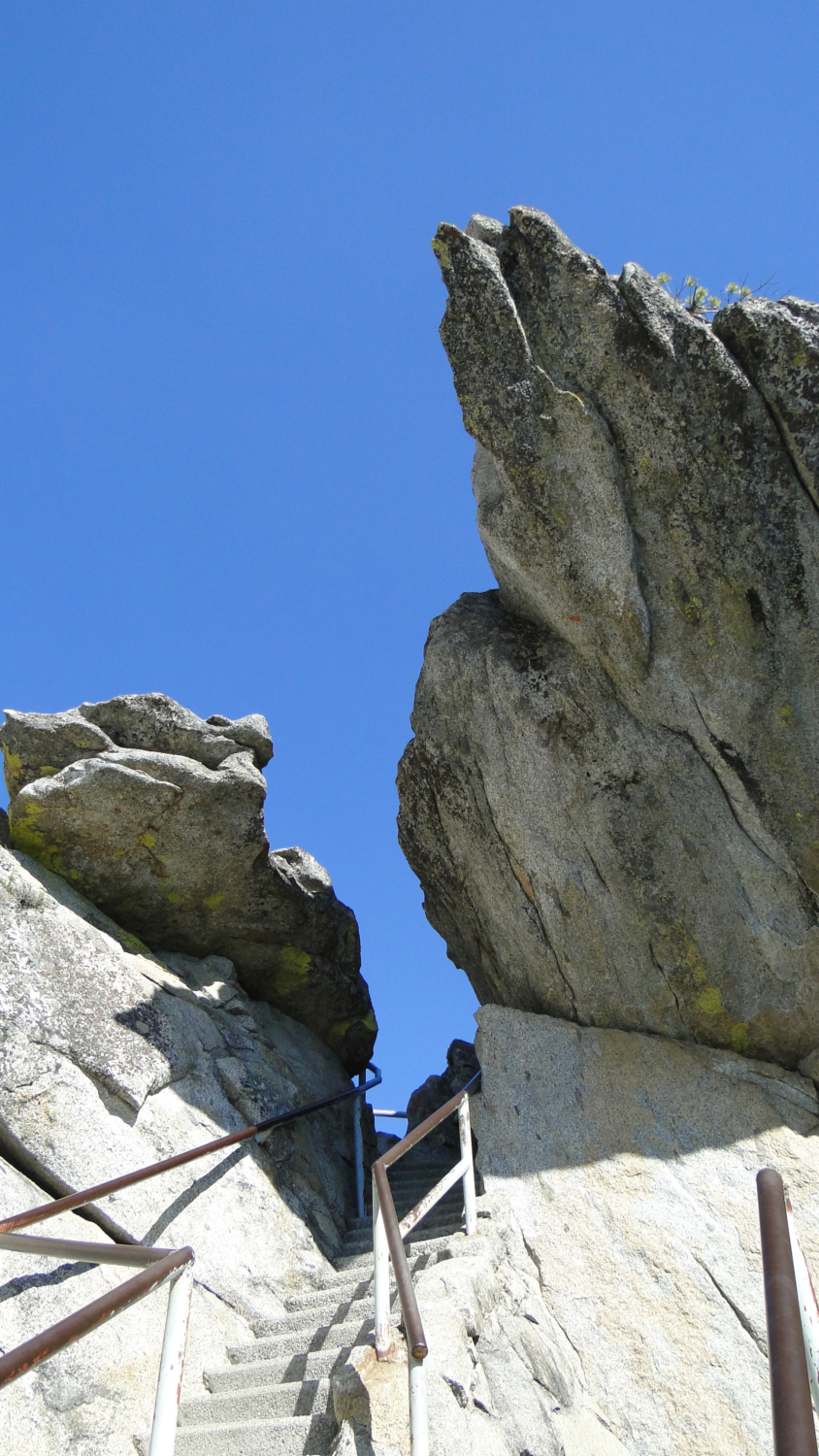 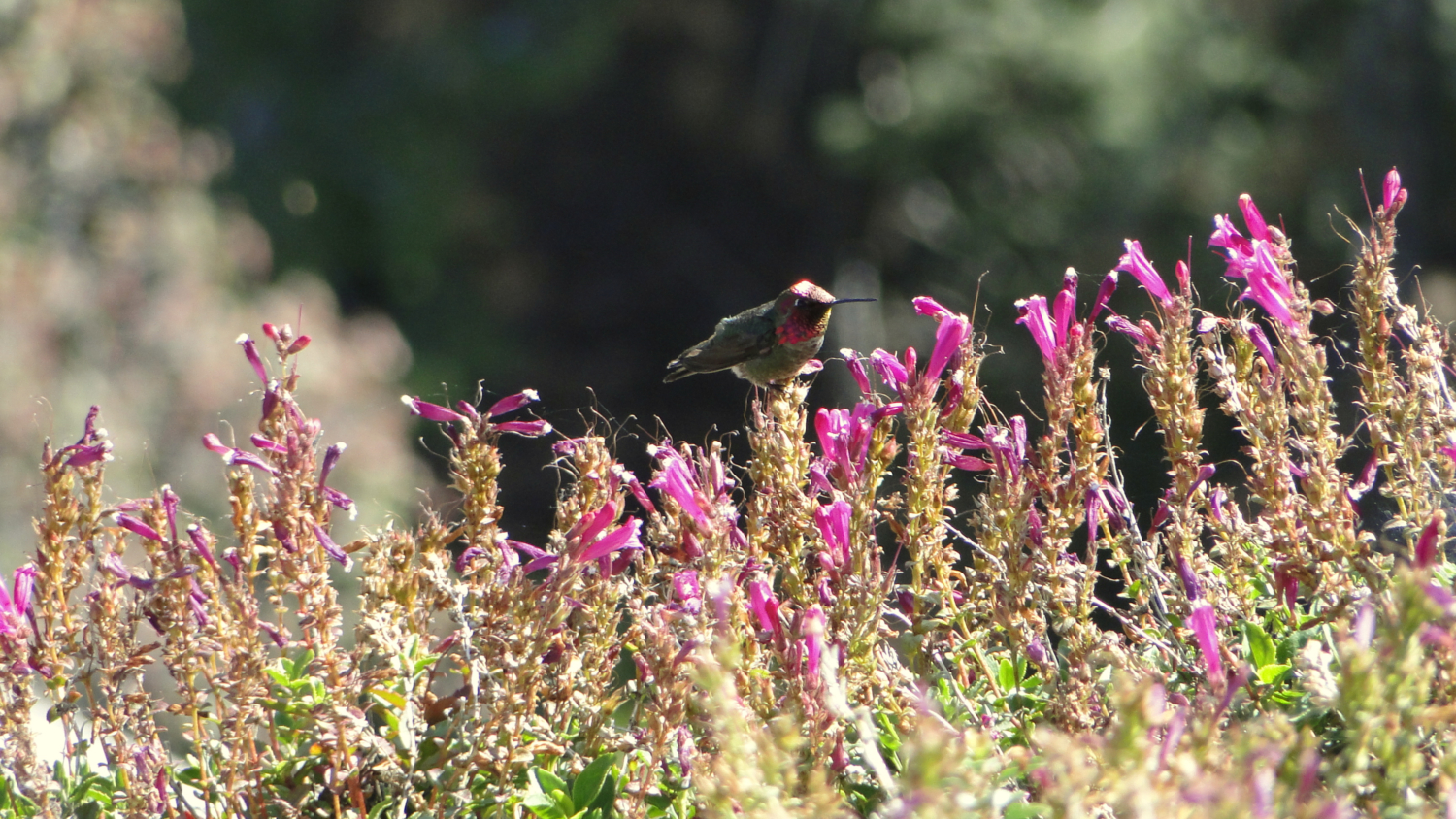 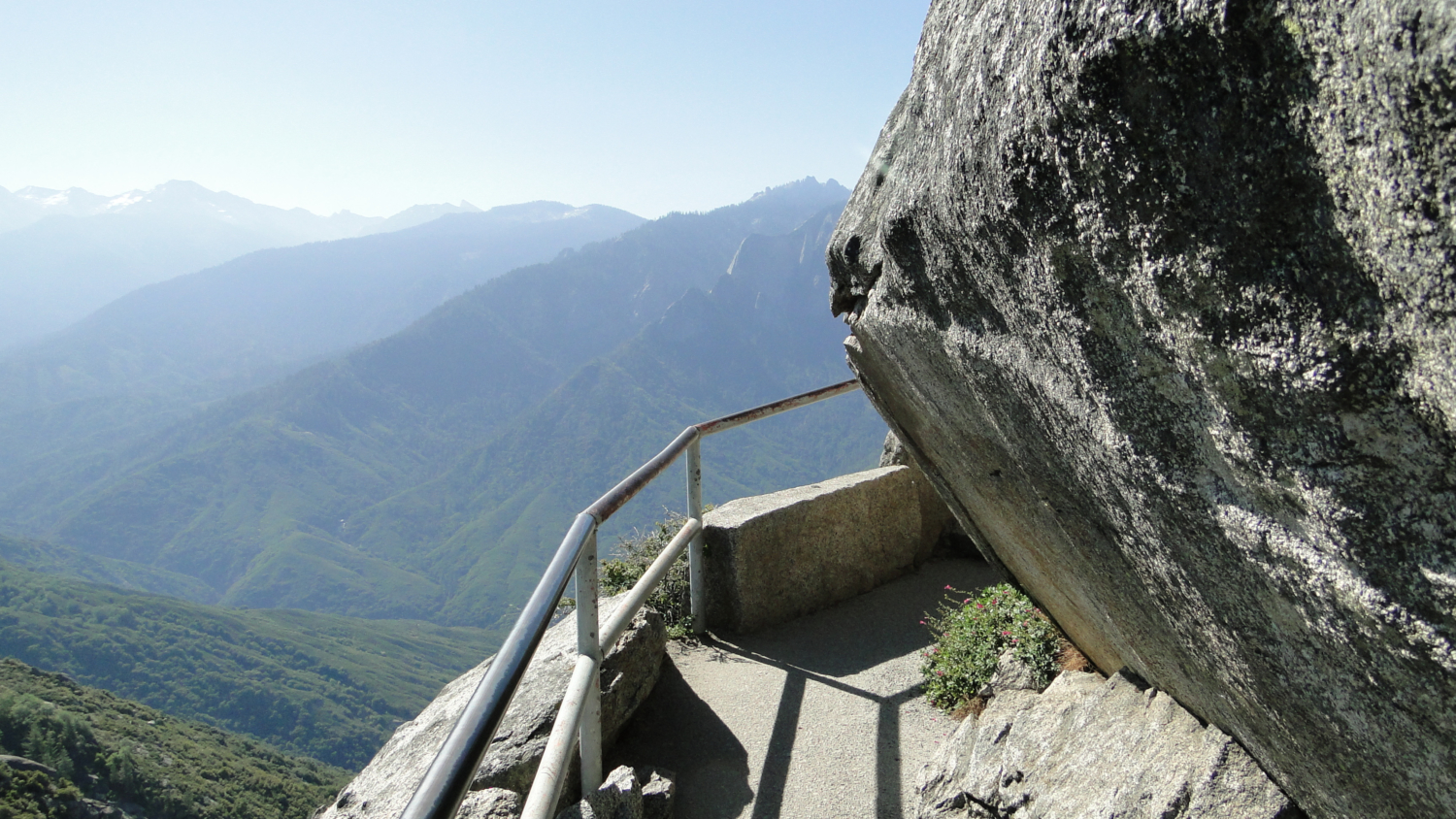 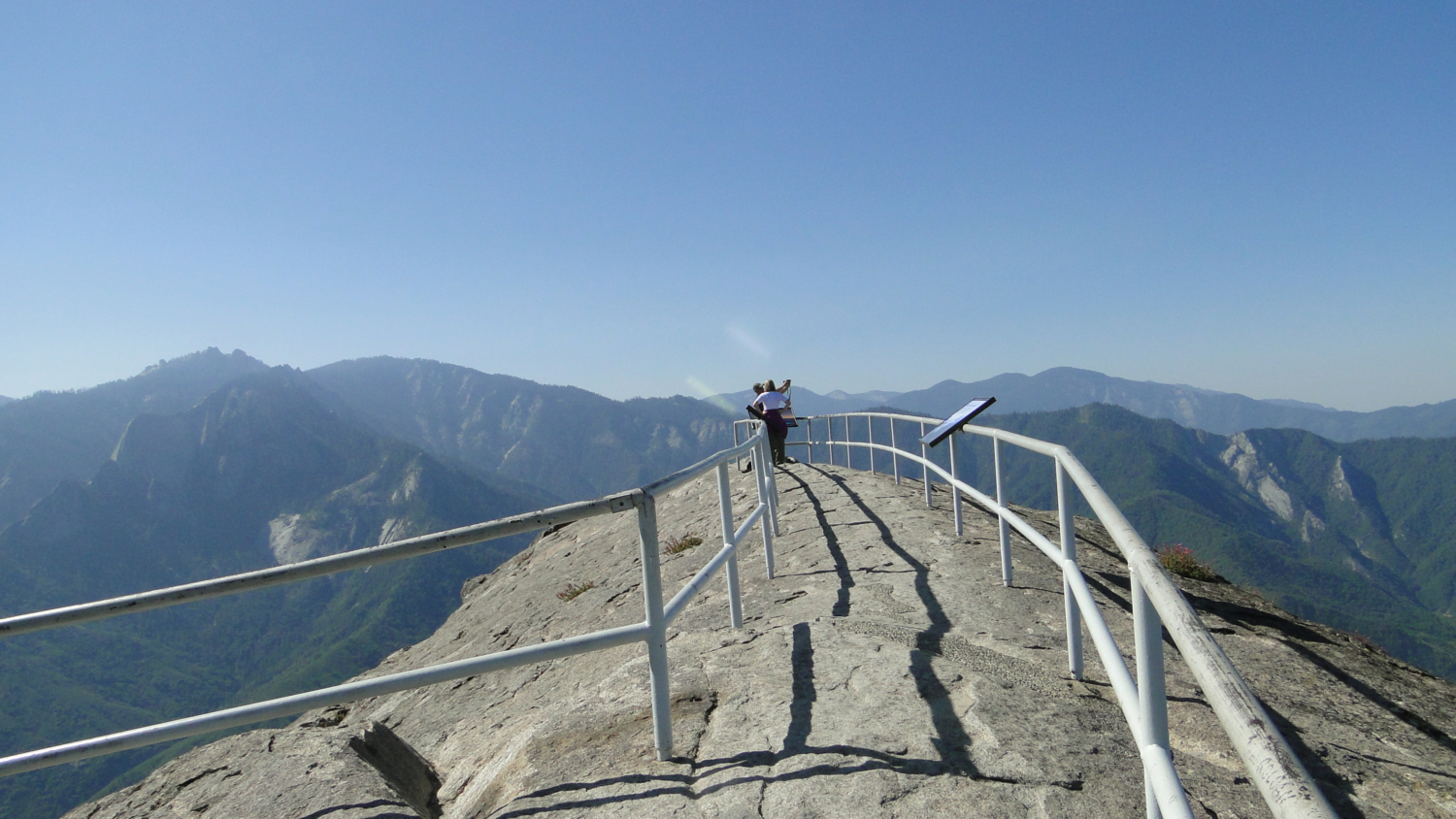 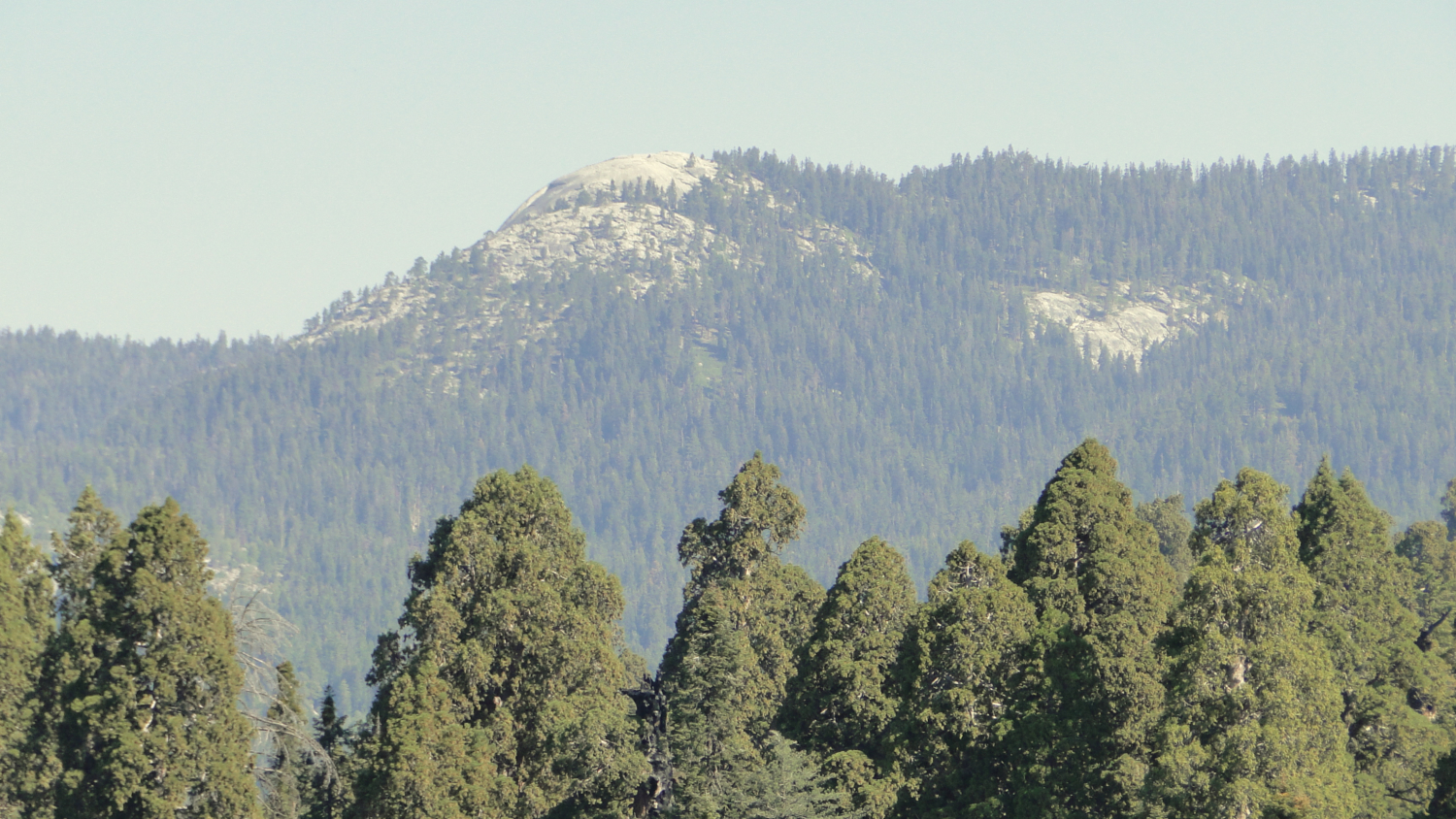 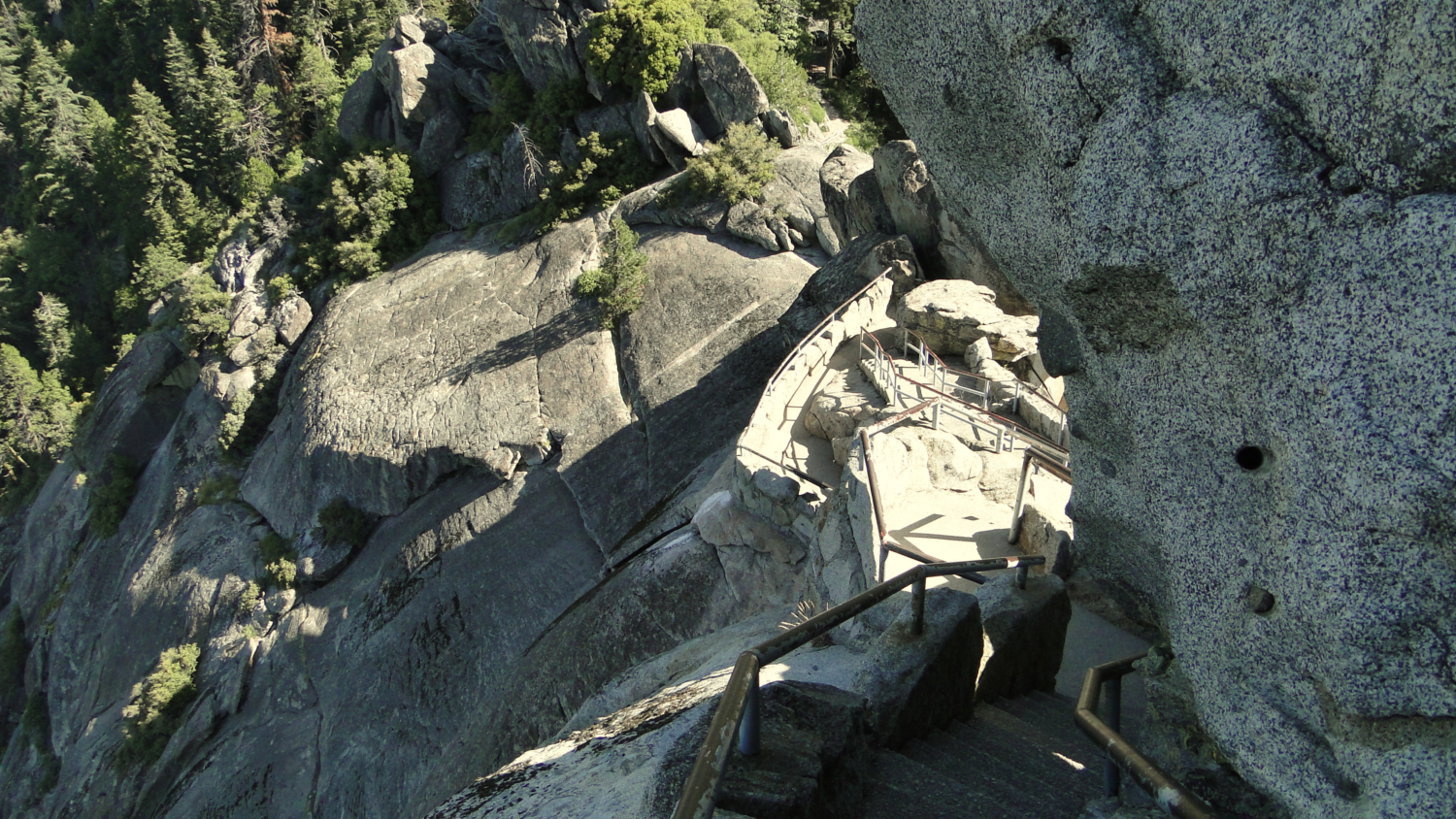 The trail is easy to follow and well-maintained. It may be a little sketchy for people with a fear of heights, but the numerous guard rails ensure that the careful climber will be safe.