The 2009 Station Fire really did a number on outdoor recreation in the San Gabriel Mountains. Millard Canyon, long considered one of the crown jewels of the San Gabriel Mountains, was completely off-limits until the Forest Service lifted the hiking ban in 2015. Although the fire’s effects can still be seen here — especially in the amount of debris that was pushed down the watershed by winter rains — volunteer crews have done an incredible job at bringing the trail back to life. At the time of writing, those same volunteers are still working in the area, so hikers can expect to see some improvements along the way. If you see one, say thank you!

This hike begins at the moderately sized parking area for the Chaney Trailhead. Look for the signs for Millard Campground, leading northeast from the parking area. 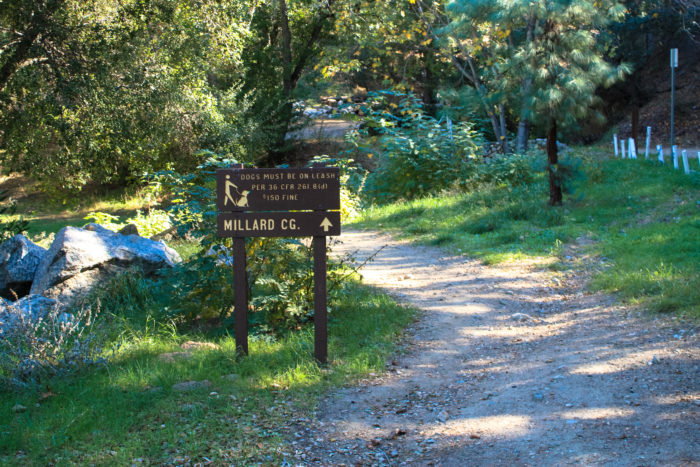 You’ll hike past some cabins and buildings that bear a striking resemblance to those found scattered around the San Gabriels in similar canyons — relics of the Great Hiking Era that saw thousands of Angelenos scrambling through these peaks and valleys at the turn of the century. 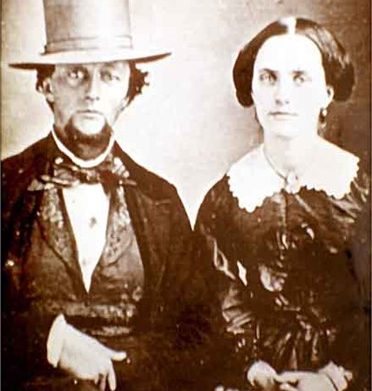 Joseph Chapman and his wife, Gaudalupe Ortega y Sánchez, circa 1847

According to historian John Robinson, Millard Canyon was once known as Church Canyon, and this location is tied to some of the earliest colonial history of Los Angeles. Around 1818, the New Englander Joseph Chapman was an officer on the privateer Hippolyte de Bouchard‘s ship when it was captured by the Spanish off the coast of Santa Barbara. When the Spanish discovered Chapman knew about logging, they tasked him with leading a band of Native American workers into the wilds north of Los Angeles to cut timber for the Plaza Church, which also gave the canyon its first known European name.

Chapman’s lumberjacking skills were in such high demand from the Spanish colonists that he became the very first gringo to permanently settle in Los Angeles. Many of his descendants still live in Southern California today.

Later, in the 1850s, Millard Canyon and nearby Las Flores Canyon were some of the first to be prospected in the San Gabriel Mountains. Although an operation deep in Millard Canyon known as the Dawn Mine was a long running and well-known institution, like most mining claims in these mountains, they tended to be money pits rather than money makers.

In 1862, Henry W. Millard homesteaded with his family in the canyon, where he raised bees and hauled lumber to Los Angeles. Millard left the canyon some ten years later after his wife and children passed away.  His family is rumored to be buried somewhere in this canyon, which still bears his name.

Continue on the wide dirt road, ignoring the Sunset Ridge Trail on your right and passing the Millard Campground on your left shortly afterward. This first-come, first-served campground is popular, especially on weekends. 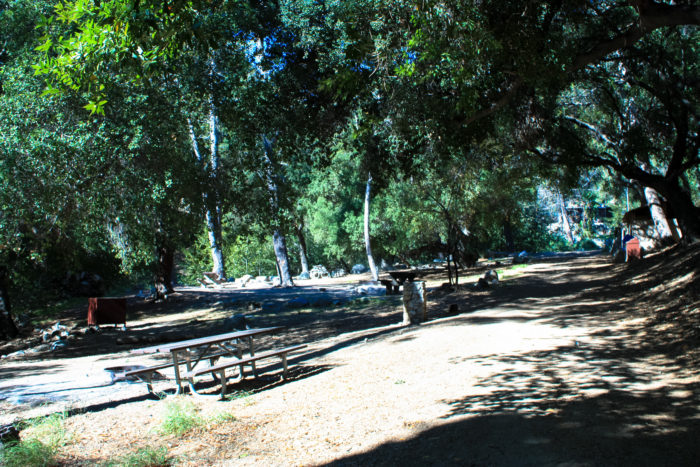 Just past this, the dirt road crosses a drainage ditch of Millard Canyon Creek and rises past another cabin on its way deeper into the San Gabriels, toward Brown Mountain. Look for a nondescript trailhead heading northeast just before you cross the creek bed — it can be easy to miss. 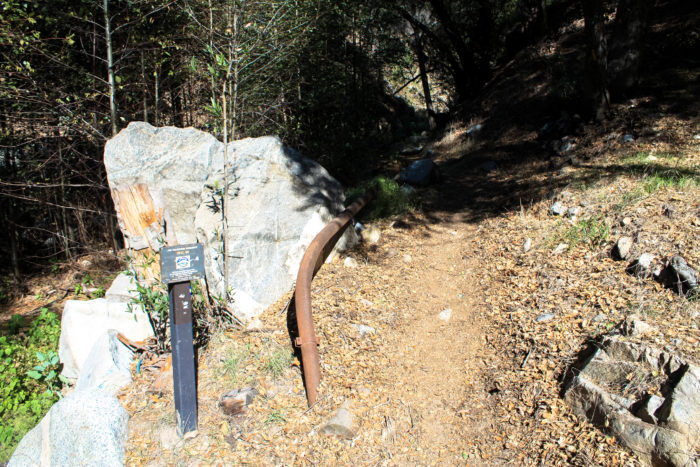 From here, the now single-track trail enters the narrow, incredibly verdant Millard Canyon. There’s plenty of shade, lots of greenery (including poison oak, so watch out!), and a lovely creek that dashes and darts its way through boulders scattered along the trail. Really, what this trail lacks in distance and difficulty it more than makes up for in peacefulness. Assuming, of course, you’re not visiting on a crowded weekend afternoon!

The trail hops over the creek multiple times, but you really don’t have to worry about slipping in — it’s a small creek and unless you’re hiking during or immediately after a huge rainstorm, your boots are probably going to stay pretty dry. 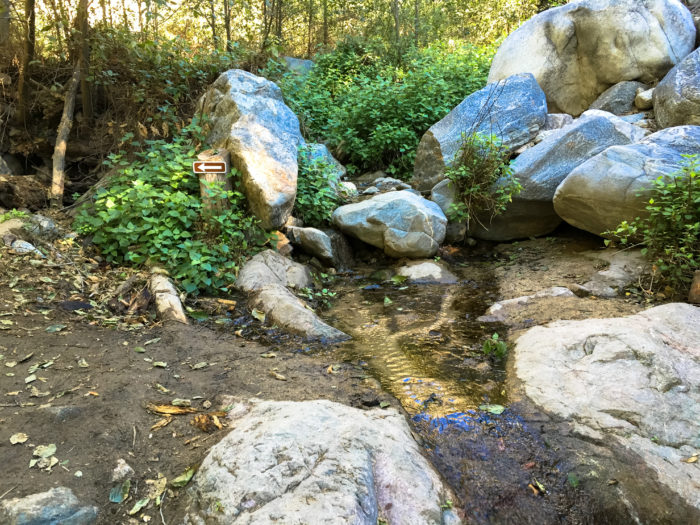 As you progress further into the canyon, you’ll likely be able to see the results of countless hours of volunteer efforts. Rockslides have been cleared, new paths have been leveled and graded, and in general the landscape looks very well cared for.

You won’t have to worry too much about finding your way here, either — you basically just stay in the canyon floor for 0.6 mile until you reach Millard Canyon Falls, which blocks easy access further into the canyon.

The falls themselves, like the rest of the canyon, are a lovely and peaceful place to linger. A huge boulder is lodged near the top of the falls but otherwise the water trickles down in a gentle cascade, gathering in a shallow pool at its base.

There are bolts in one of the sheer rock wall here, if you’re in the mood for rock climbing. There is also a rough use-trail that climbs up around the southeast side of the falls that can be used to access upper Millard Canyon. You can also reach this section of Millard Canyon with a longer (but easier) approach from the Mount Lowe Motorway on the way to the Dawn Mine site.

Enjoy your time here, then return back the way you came. 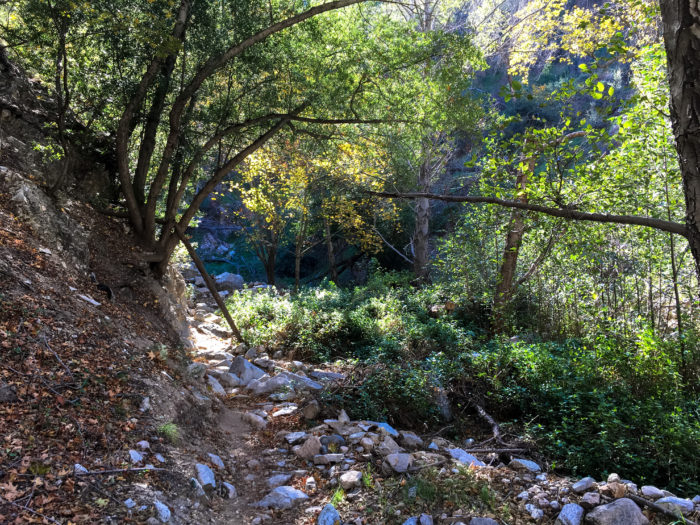 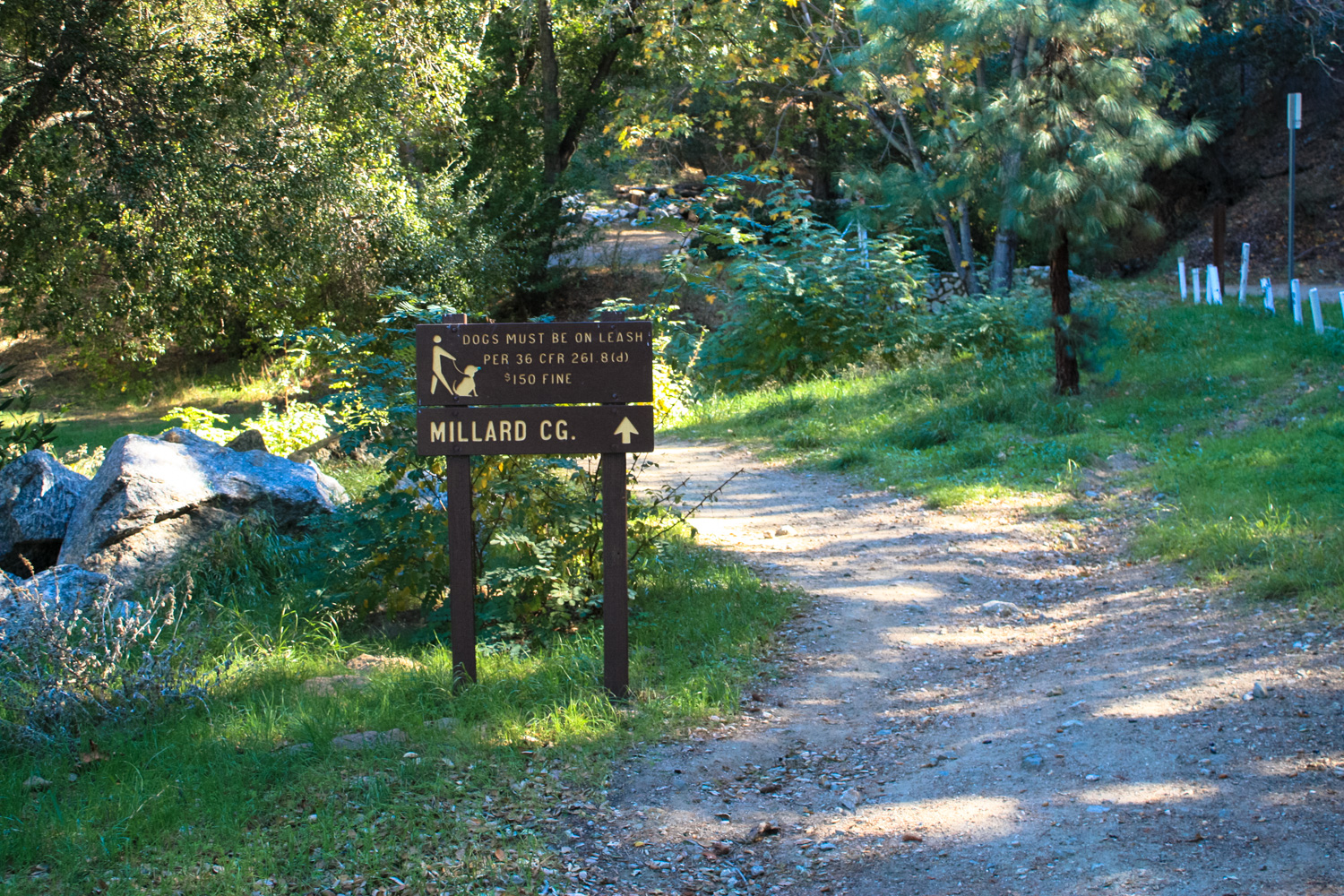 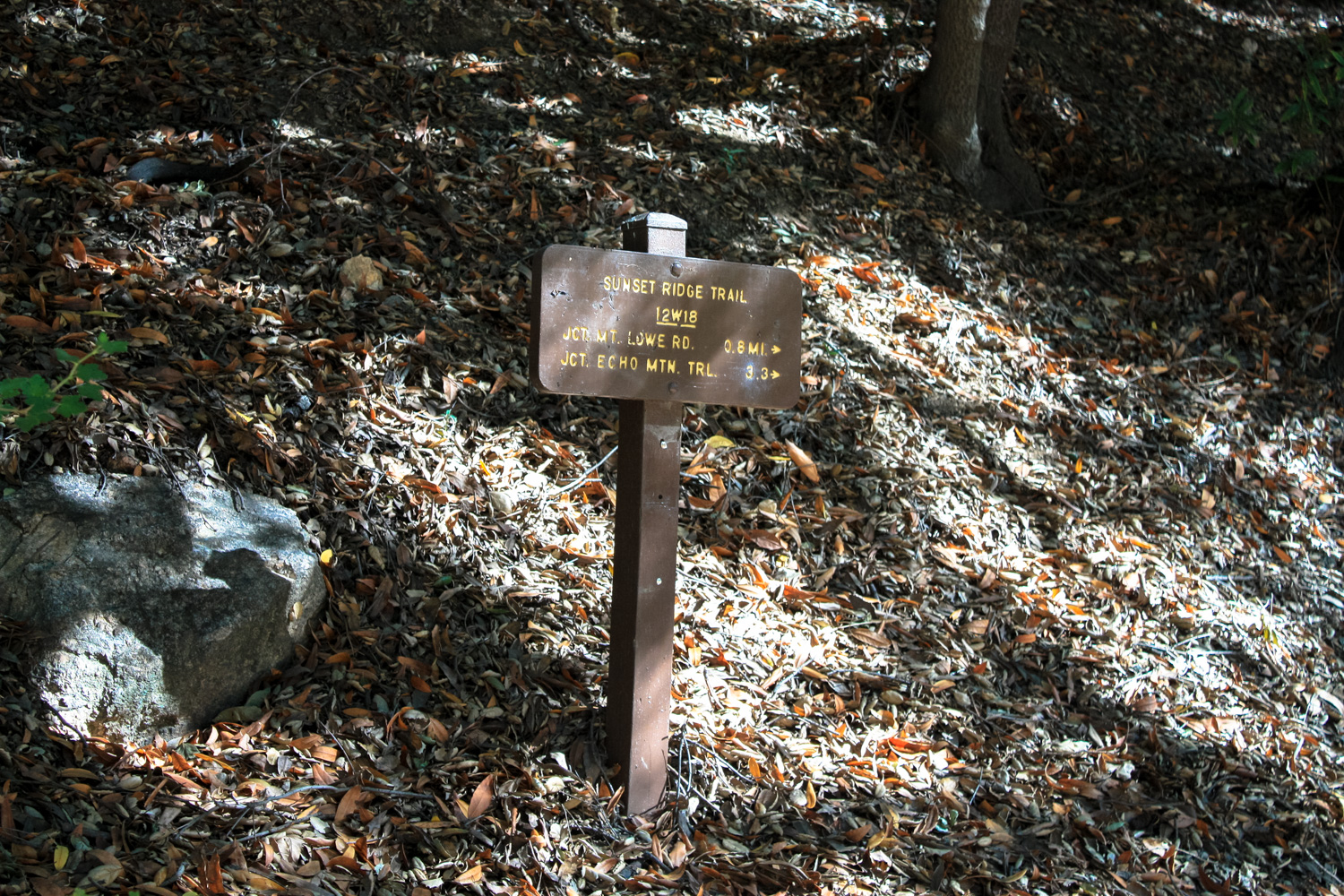 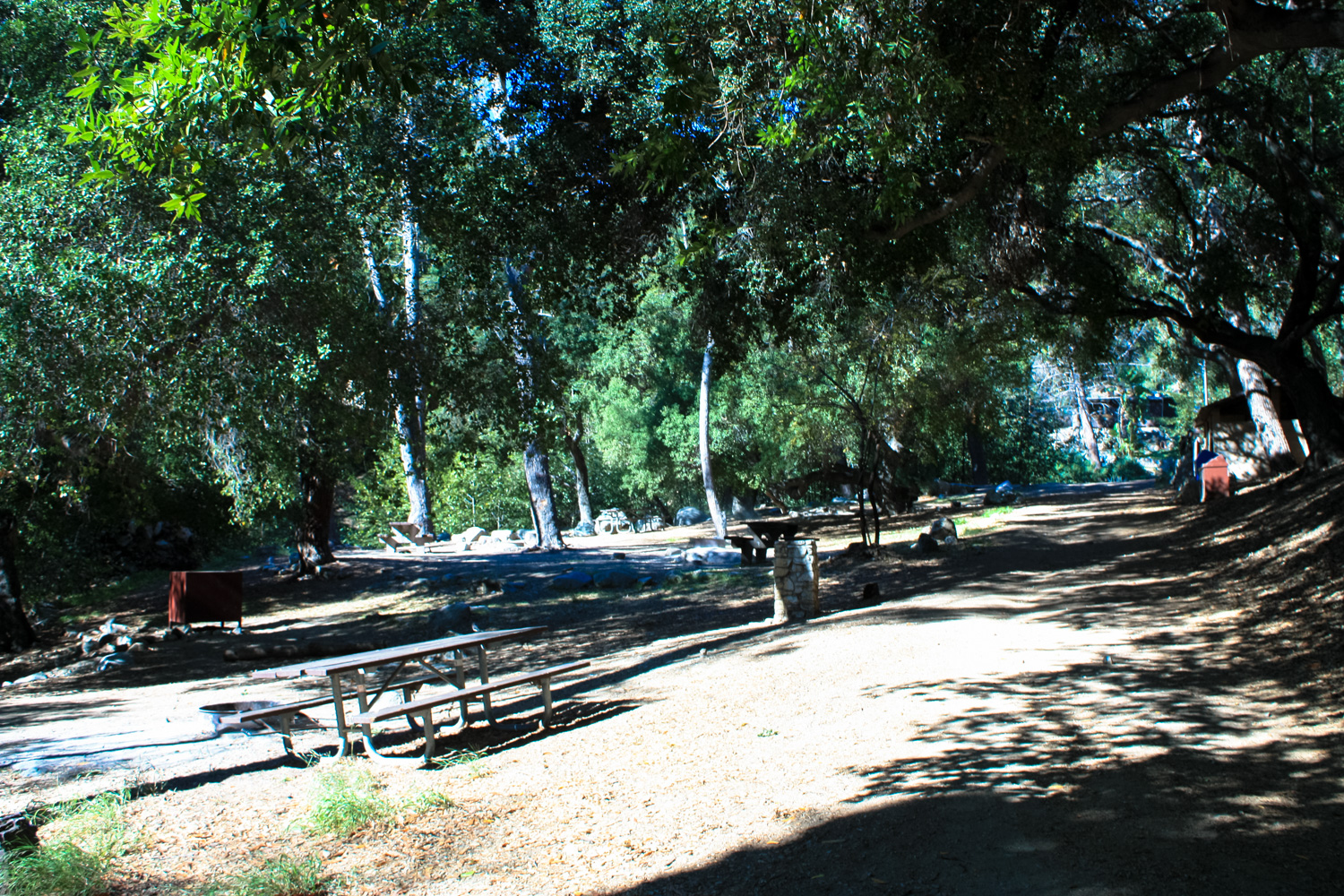 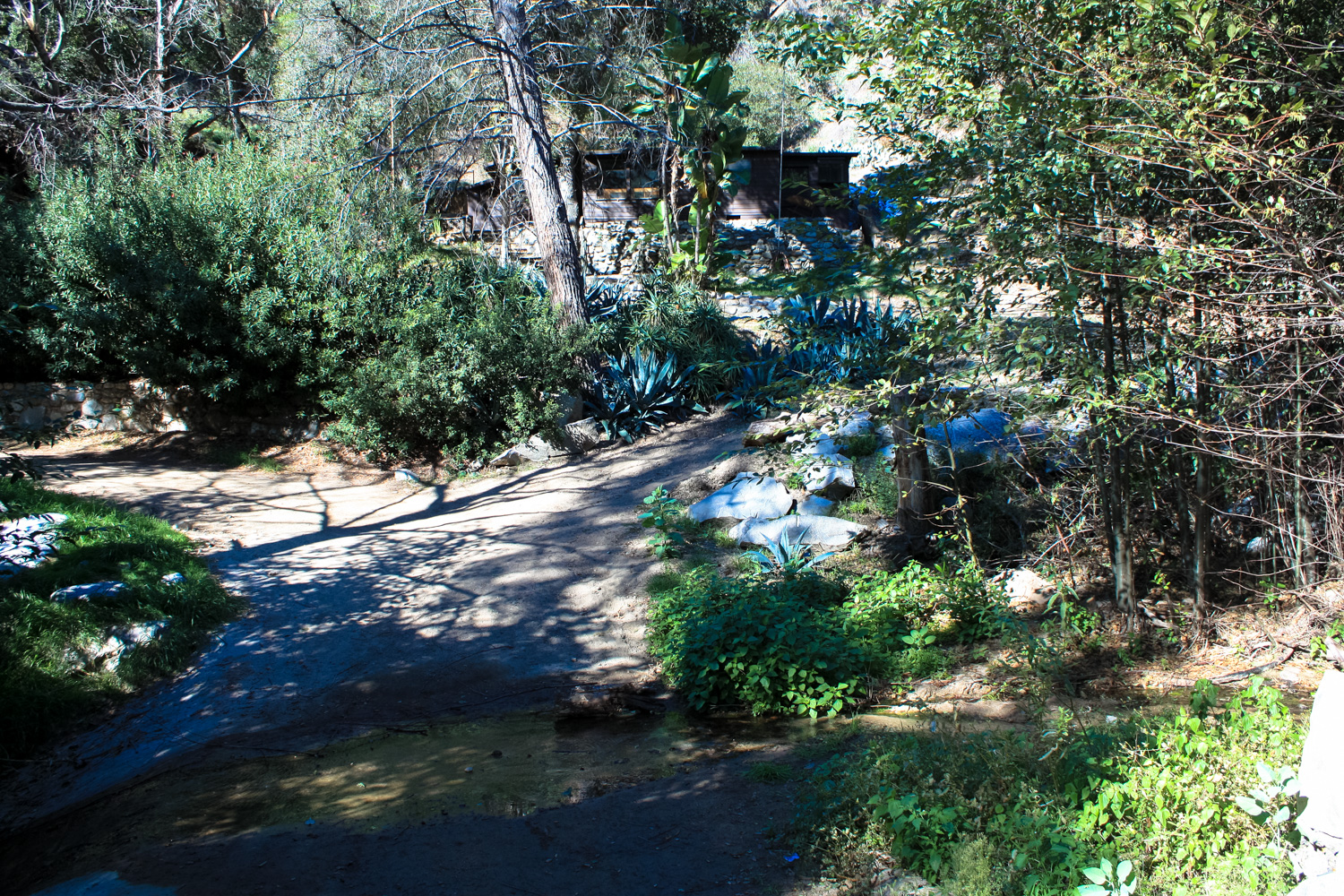 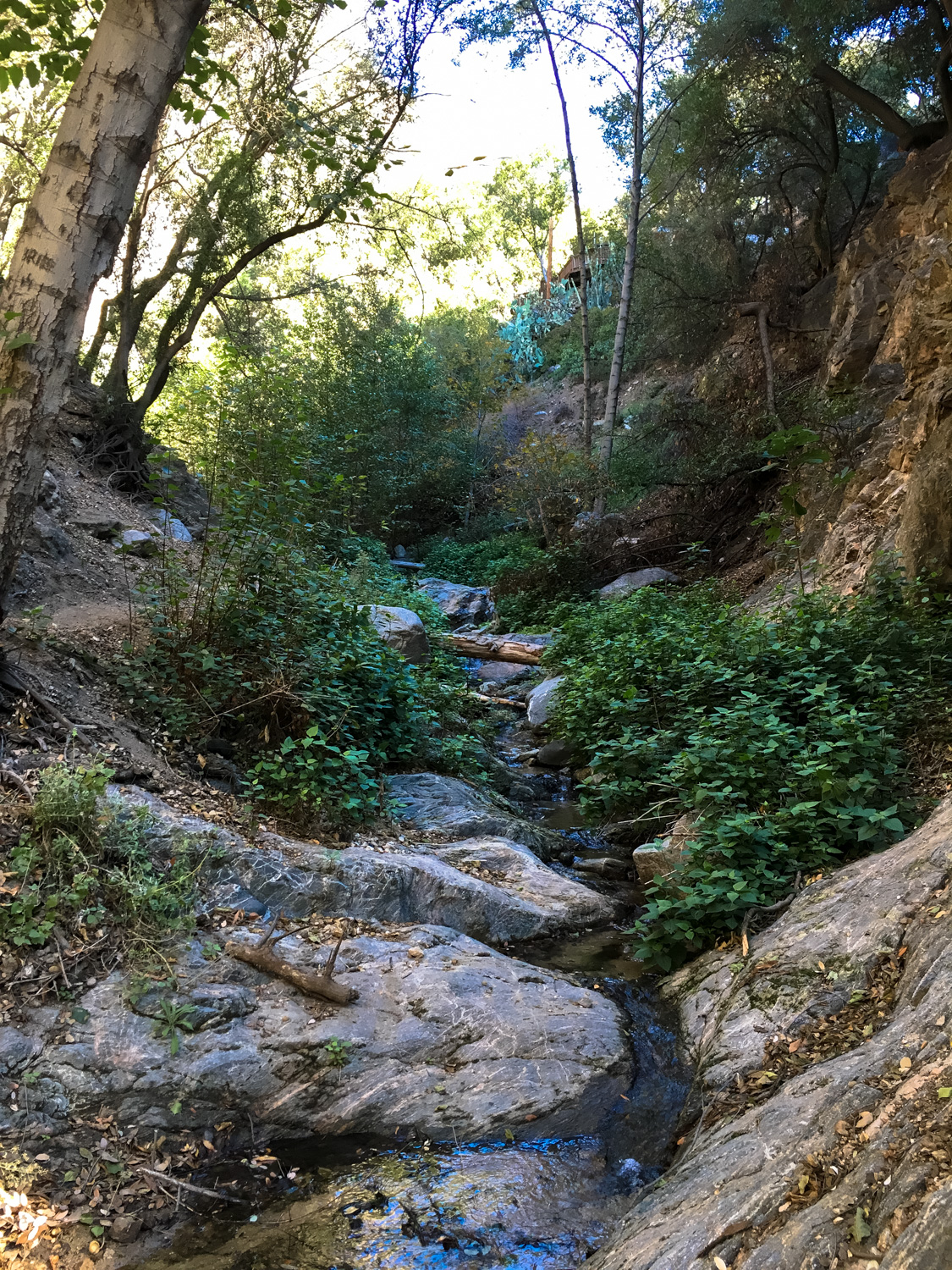 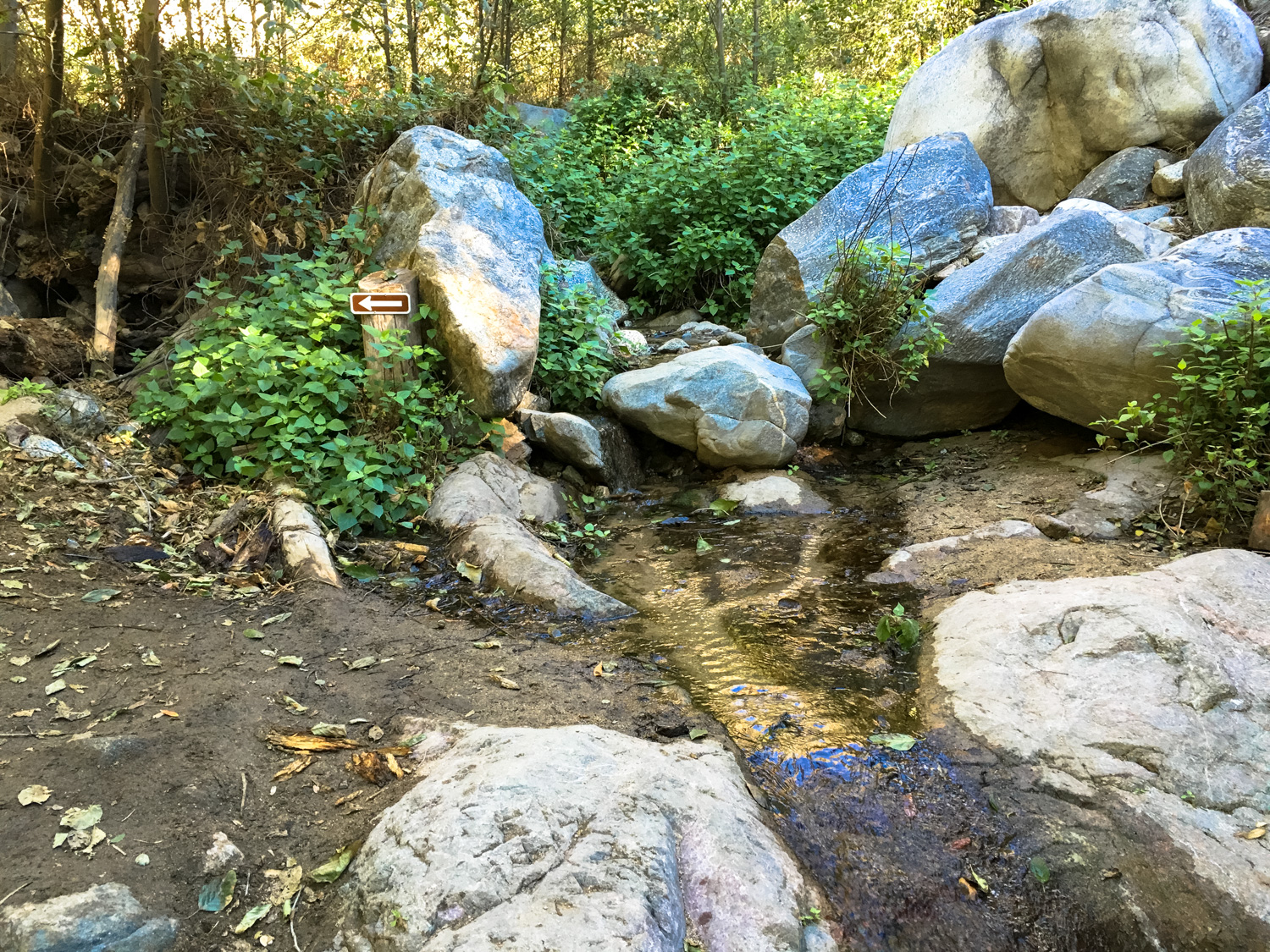 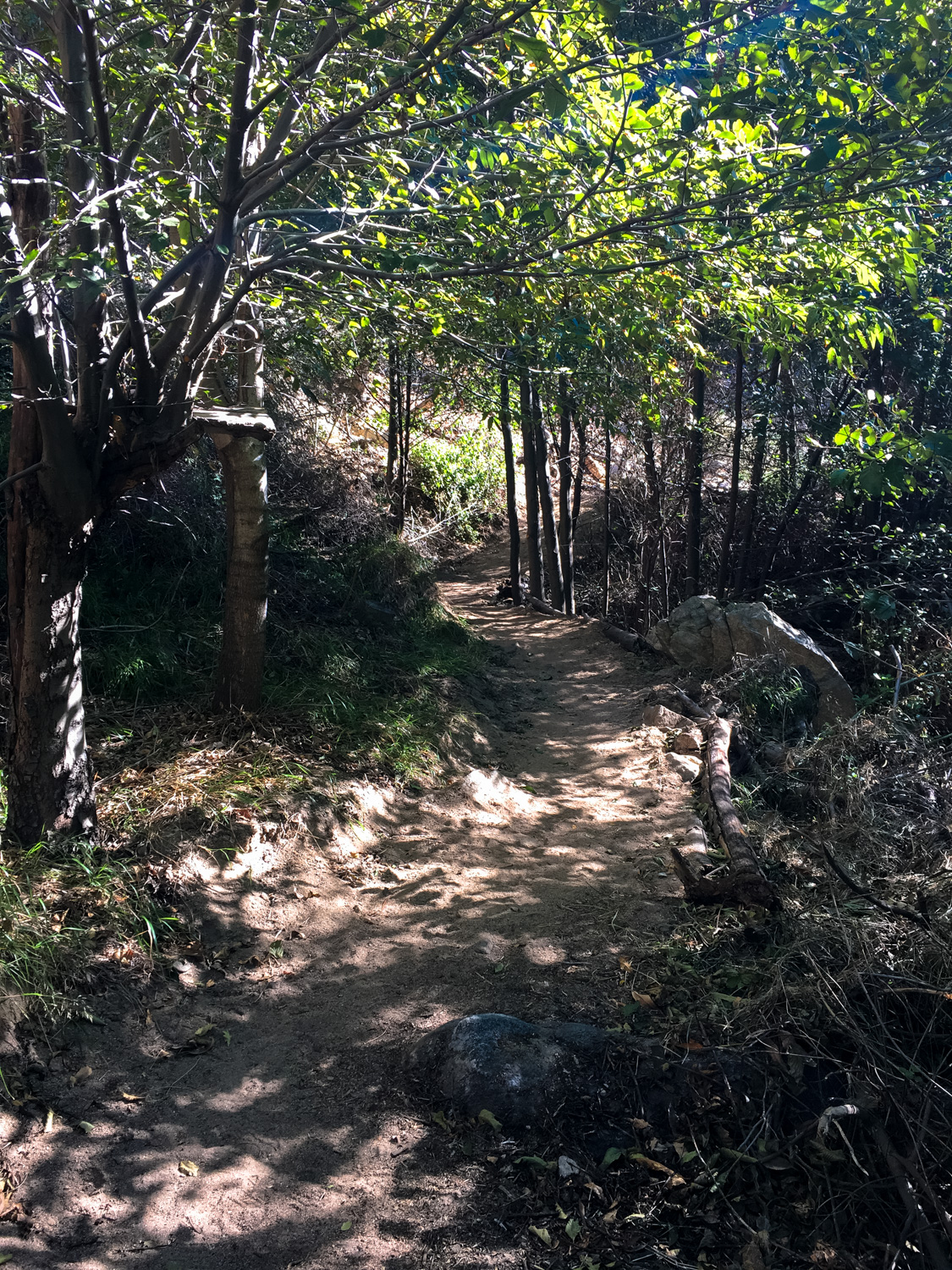 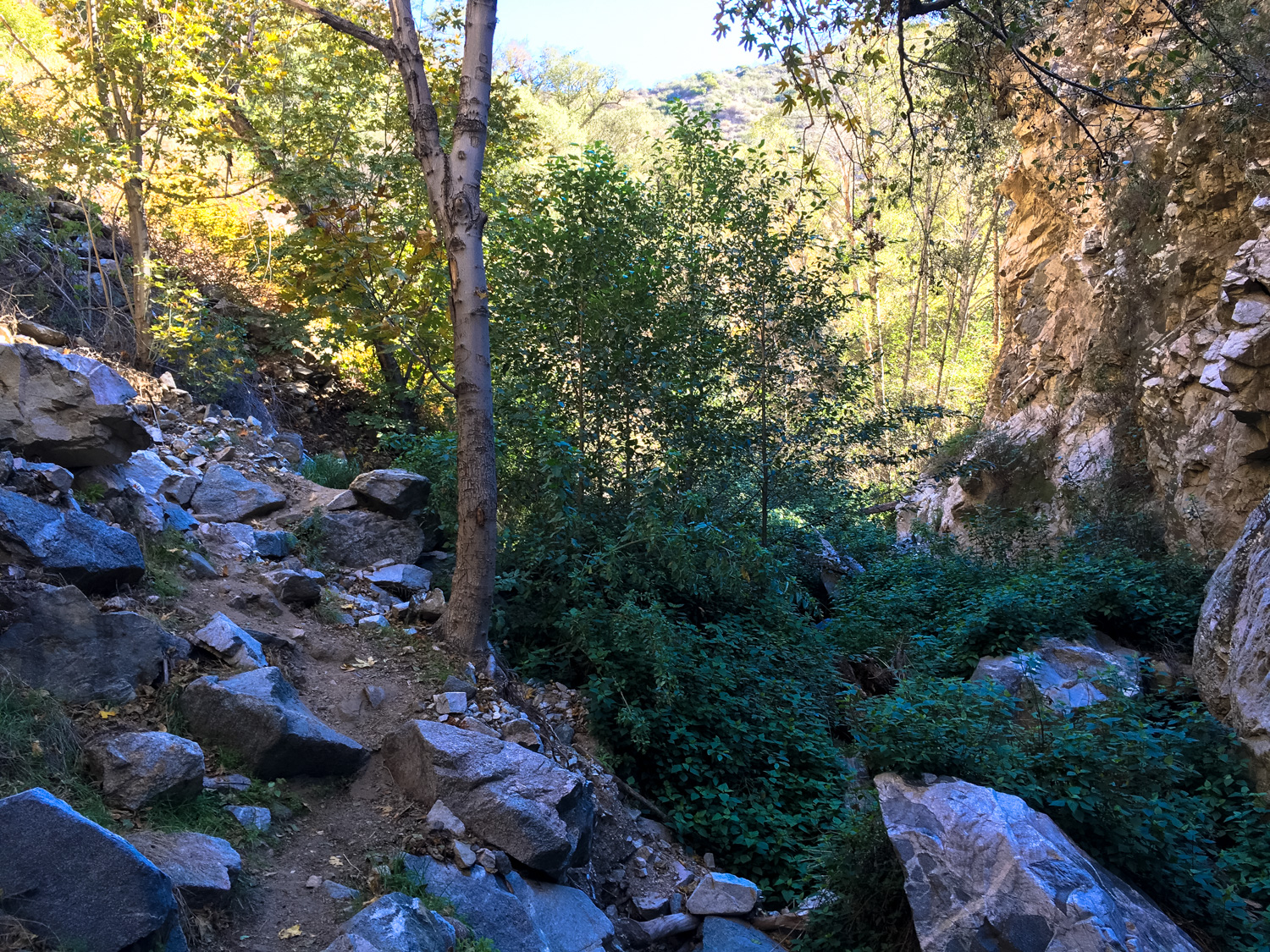 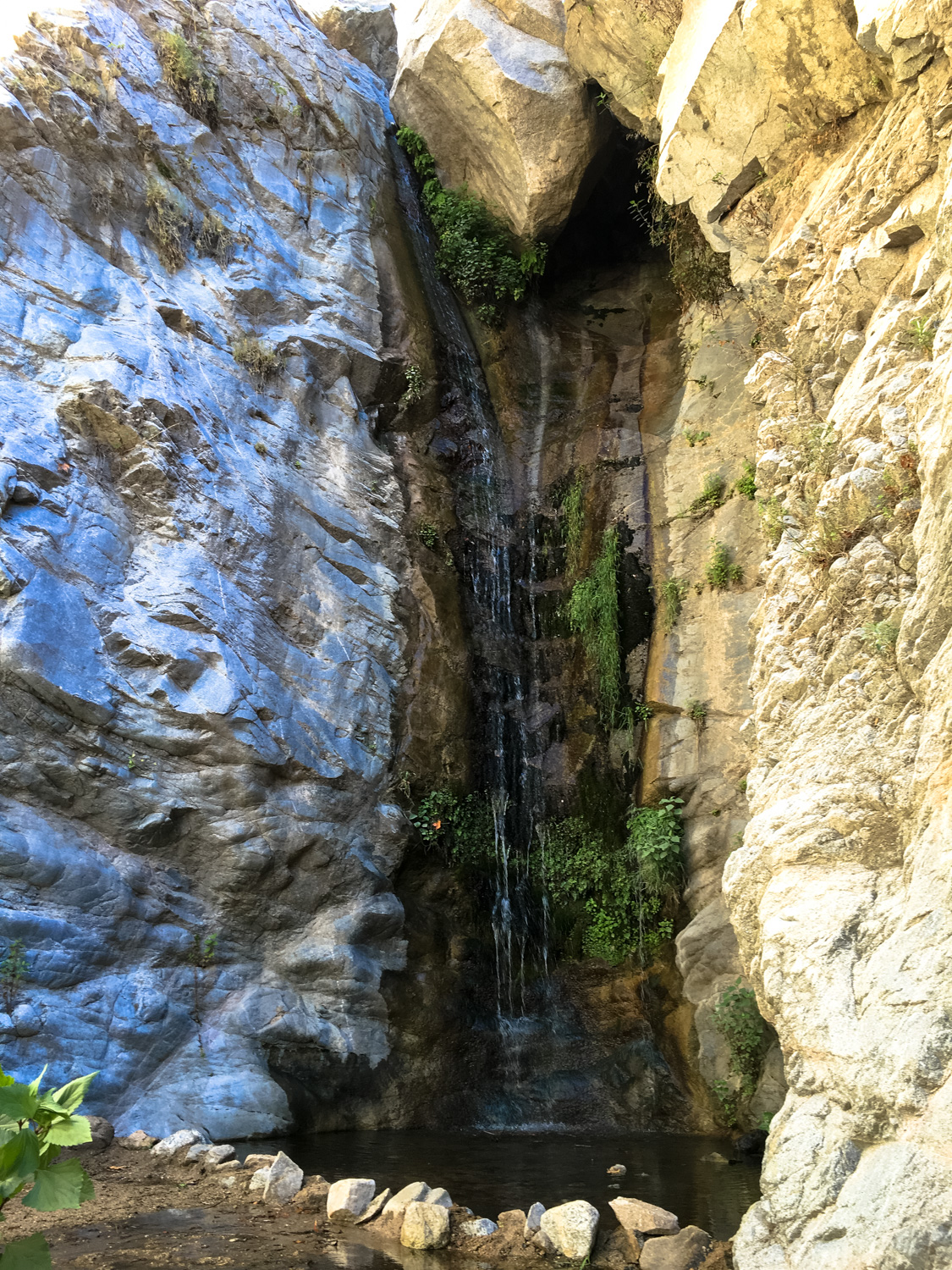 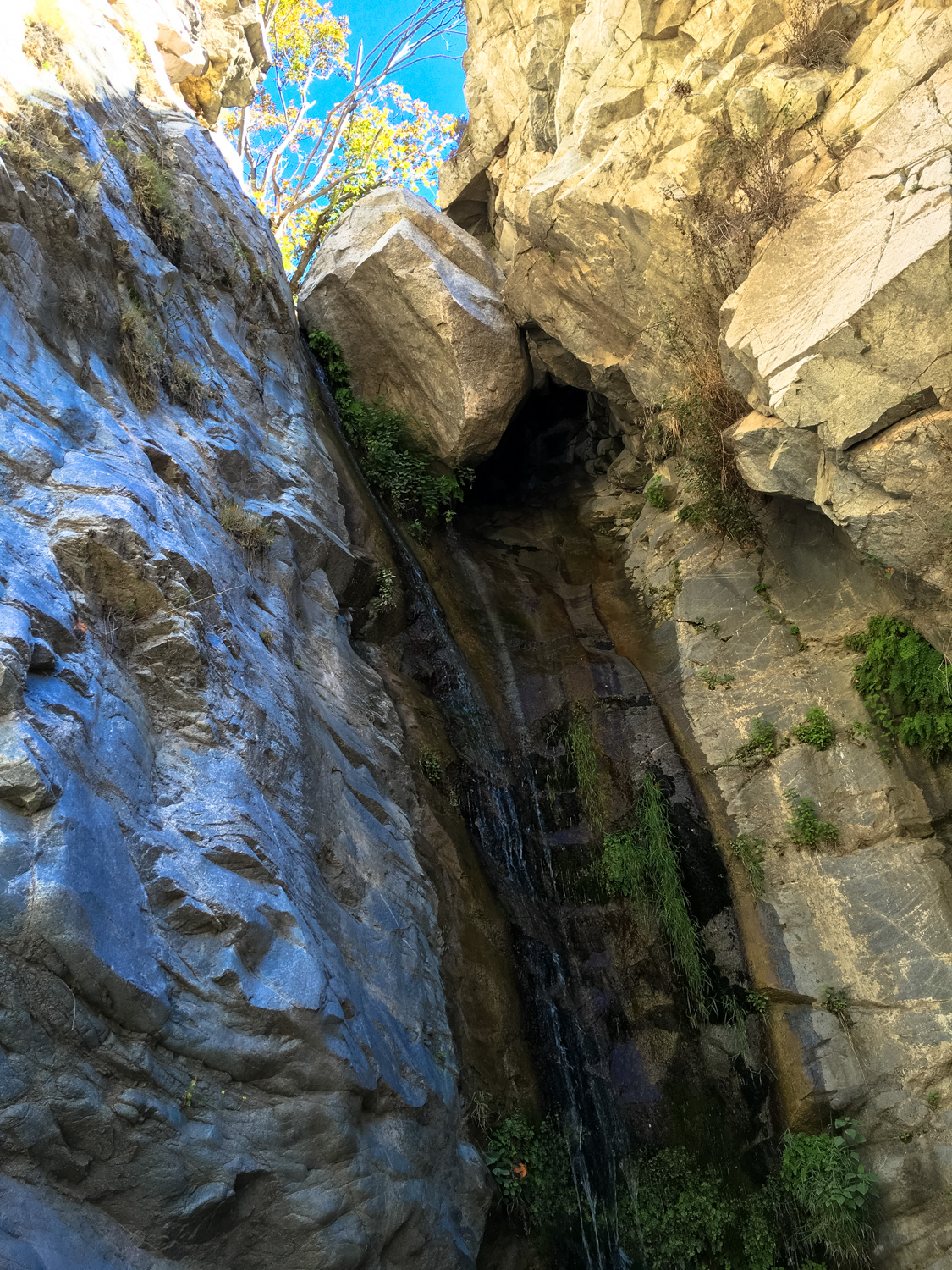 Good and getting better. This trail was hard-hit by the 2009 Station Fire and subsequent rain storms and was closed until late 2015. Forest Service and volunteer crews have done an excellent job in clearing and repairing the majority of this trail and are still hard at work doing so.

There are six hike-in campsites at Millard Trail Camp. The campsites are first-come, first-served, and although it's a hike-in camp site it's close enough to the trailhead parking that for all intents and purposes it's car camping with a short walk. Campground may be closed due to bear activity. Call 818-899-1900 for more information.

From the 210 west of Pasadena, take the Lincoln Avenue exit. Head north on Lincoln for 1.9 miles, then turn right onto Loma Alta Drive. In 0.6 mile, turn left onto Chaney Trail (the intersection is a bit concealed - look for a flashing traffic light) and in 1.2 miles, take a sharp left onto the Brown Mountain Truck Trail. This road is closed to vehicles at the trailhead to Millard Canyon. Display your Adventure Pass.