Hawaii Volcanoes National Park protects one of the most active volcanic areas in the Pacific Basin, if not the world. On an almost daily basis, liquid hot magma works its way up to a pair of volcanic vents and occasionally spills over to flow down slope toward the sea. The park’s accessible infrastructure and scenic trails allow visitors the opportunity to view one of these vents, although the lava is only a small part of the park’s myriad wonders. One of the principal attractions of the park – especially for hikers – is the opportunity to hike through surreal volcanic landscapes amidst lush tropical forests. 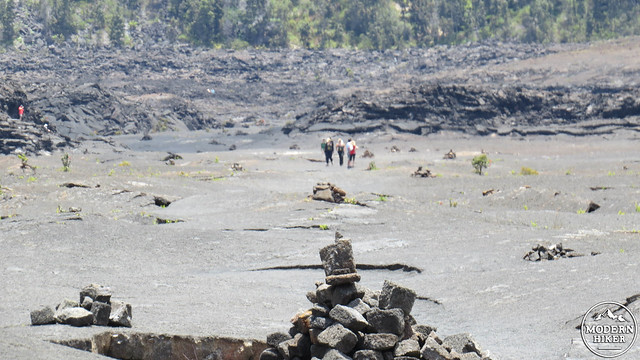 Floor of the crater

Kilauea Iki is a small crater adjacent to the much larger Kilauea Caldera. For the linguistically inclined, “Iki” is a Hawaiian diminutive, and the crater’s name means “Little Kilaeau.” This particular crater formed after a month-long eruption during the tail-end of 1959. The final stages of the eruption left a lava lake within the walls of the crater, and the lava cooled rapidly, “freezing” in place and leaving a relatively flat surface at the crater’s bottom. Casual visitors can observe the crater from numerous viewpoints along Crater Rim Drive. Hikers can enjoy a moderate route that drops down into the crater and crosses the crater floor before climbing back out again. 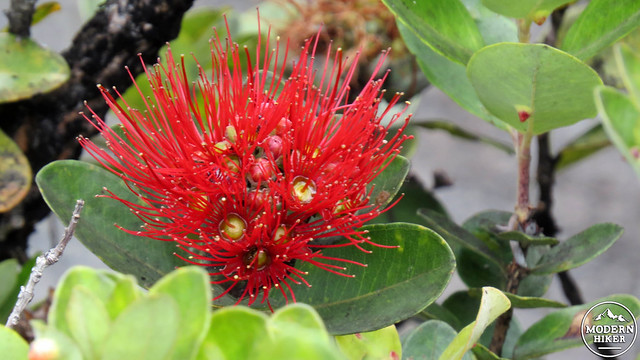 The source of this volcanism, and indeed the source of the entire Hawaiian Island chain, is the Hawaii Hot Spot. The hot spot is a stationary weak point in the earth’s crust where magma is able to rise up to the earth’s surface and build volcanic mountain ranges from the ocean floor up. When these mountains penetrate the ocean’s surface, they form islands; each of the Hawaiian islands is a mountain top rising anywhere from 15,000-25,000′ from the bottom of the ocean. This hot spot is most active at Kilauea, which has been in a state of continuous eruption for for 32 years. Some of the land around Kilauea is the youngest on the planet, and it is occasionally younger than your gold fish, your kitten, or your even your newborn baby. 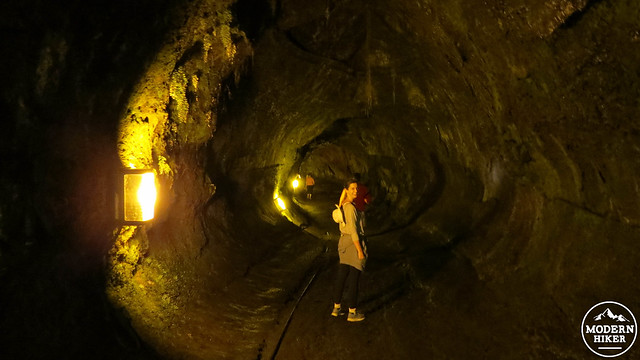 My wife versus the volcano

Visitors should be aware that this area sits around 4,000′ of elevation and is subject to frequent rains. Even when it isn’t raining, the area often receives heavy fogs. The combination of elevation and high humidity means that this area is often colder than you would expect. While the coastal parts of the island usually hover around temps in the mid-80’s, Kilauea is often in the low 70’s during the day and can dip down into the 50’s at night. 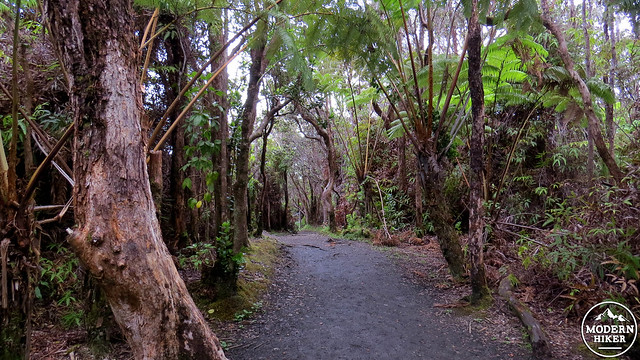 The hike for Kilauea Iki can begin at either the main trailhead or at the parking area for the Thurston Lava Tube. We recommend the main trailhead since you will reach it sooner after a somewhat challenging climb out of the crater. From the trailhead, start waking east along the wide and generally smooth trail that hugs the crater’s rim. You’ll get frequent views down into the crater along this stretch through gaps in the dense rain forest vegetation. Keep your distance, though; many of these “viewpoints” do not have guard rails, which is every acrophobe’s nightmare. 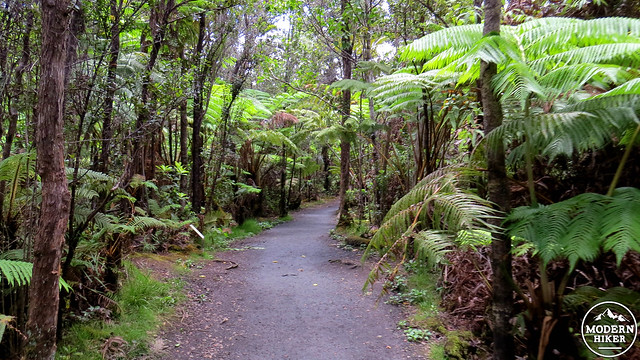 After .3 mile, the trail will reach the parking area for the Thurston Lava Tube. The lava tube is a worthy side trip. The brief loop branching off of the main route visits a .3 mile-long tunnel created by a lava flow.Lava tubes form from cooler, more viscous lava flows. The cooler lava on the surface will solidify faster than the lava beneath it. The cooled lava forms a crust that becomes a roof  under which the rest of the lava continues to flow, thus forming a tube. When the flow stops, a cave is left in its place. Later lava flows might follow the channel created by the tube as a sort of “highway” leading out and away from a lava vent. 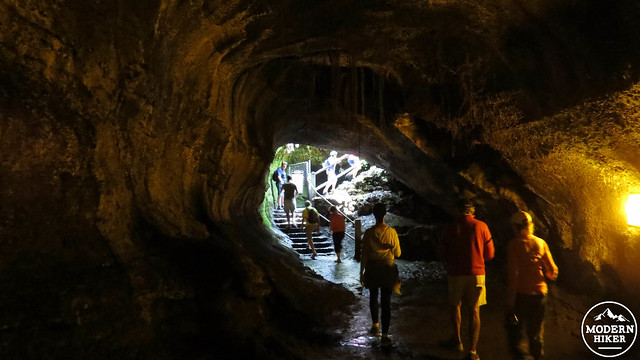 Once back on the main trail, you’ll follow the rim of the crater with a gradual trend to the south and then west. At 1.1 mile, you’ll begin a switchbacking descent through more dense forest down to the crater’s floor. Approximately .5 mile mile later, you’ll find yourself standing at the bottom of Kilauea Iki, with a seemingly flat valley with nearly vertical walls to the north and south. 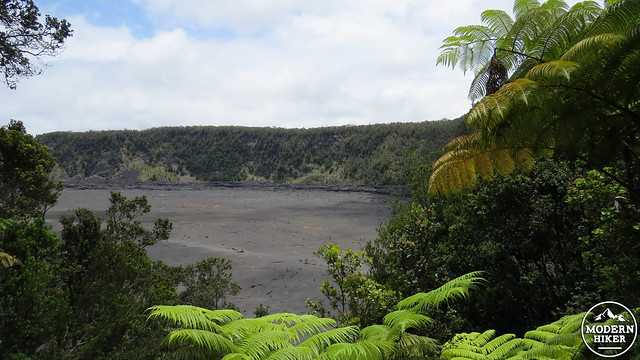 The descent to the crater floor

The crater itself isn’t entirely flat. In spots, the crater looks like a lake of lava frozen solid might, although there are frequent cracks where large plates of lava are bent and broken.  Steam rises from a handful of vents on either side, indicating that volcanic activity is still occurring below the surface. Given the presence of steam vents throughout the crater, it is unwise to stray far off the beaten path. 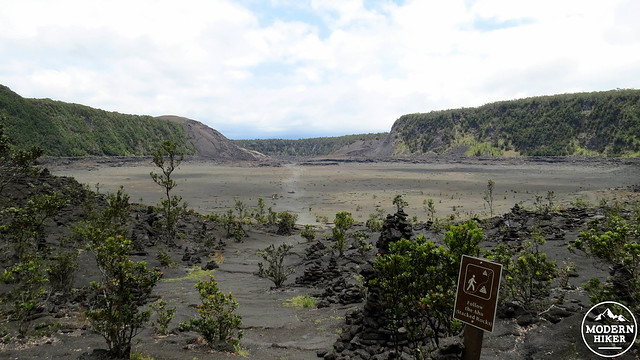 Make your way across the crater in a generally straight line along a path marked with cairns. The terrain gets rougher on the opposite side of the crater at 2.4 miles where the path enters a rocky, rugged section before commencing the ascent back out of the crater. After wending your way through a maze of jagged rock, you’ll come to the base of the climb out, which is part trail and part staircase. This steep section is the toughest part of the hike, and less experienced hikers will likely end up huffing and puffing a bit on this stretch. 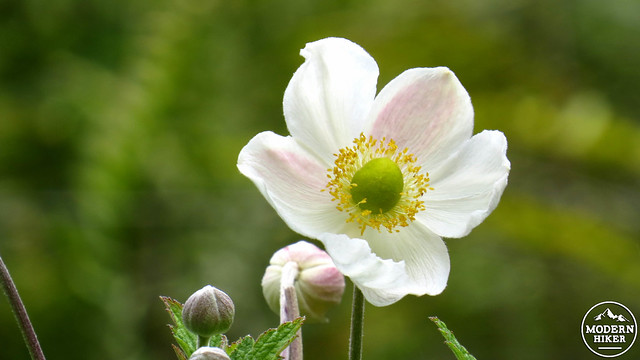 Once you reach the top of the climb, you’ll find yourself on a densely forested ridge separating Kilauea Iki from the much large Kilauea crater just to the south and west. With all of the vegetation, it is difficult to catch a glimpse of Kilauea, although you can see it if you take a detour onto the Byron Ledge Trail, which approaches the eastern rim of Kilauea’s main caldera. At a break in the trees, you can see the vast, circular chasm stretching several miles to the east. Steam rises up from the Halemaumau Crater vent, which is one of two currently active vents on Kilaeua. 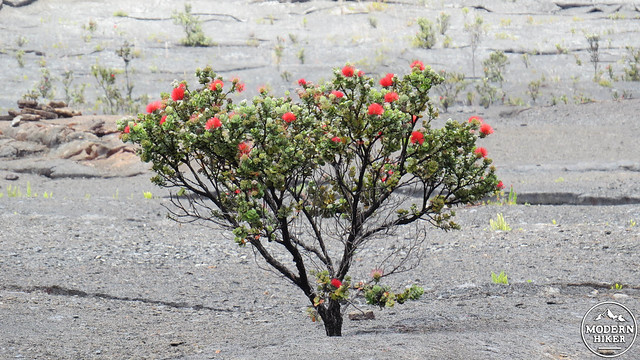 The trail will loop back around to the starting point along Kilauea Iki’s western and northern rim. Much like the initial portion of the hike, you’ll continue through lovely tropical forest with occasional breaks in the vegetation revealing the startling 300′ drop down to the crater below. The trail returns to the parking lot at 4.1 miles, completing the loop and ending the hike. 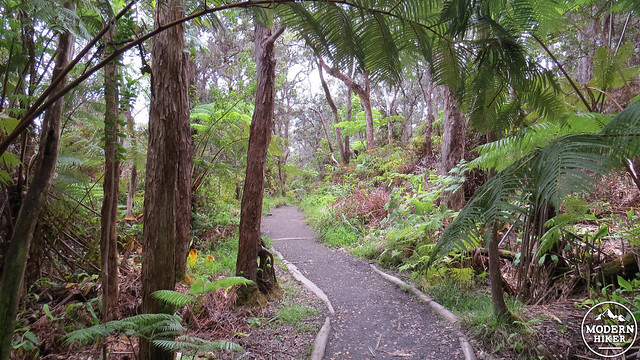 Accommodations near Kilauea Iki and the Thurston Lava Tube 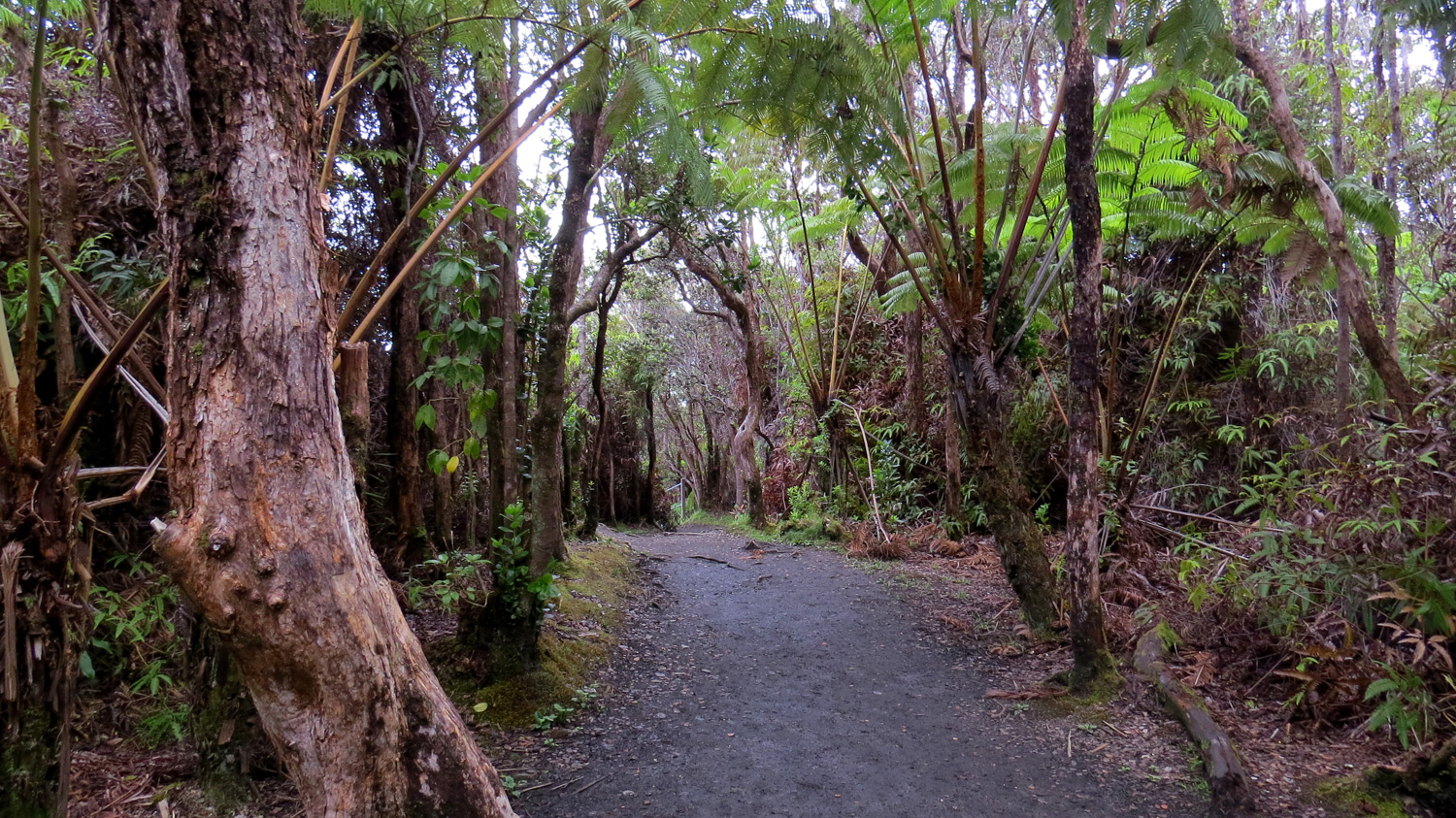 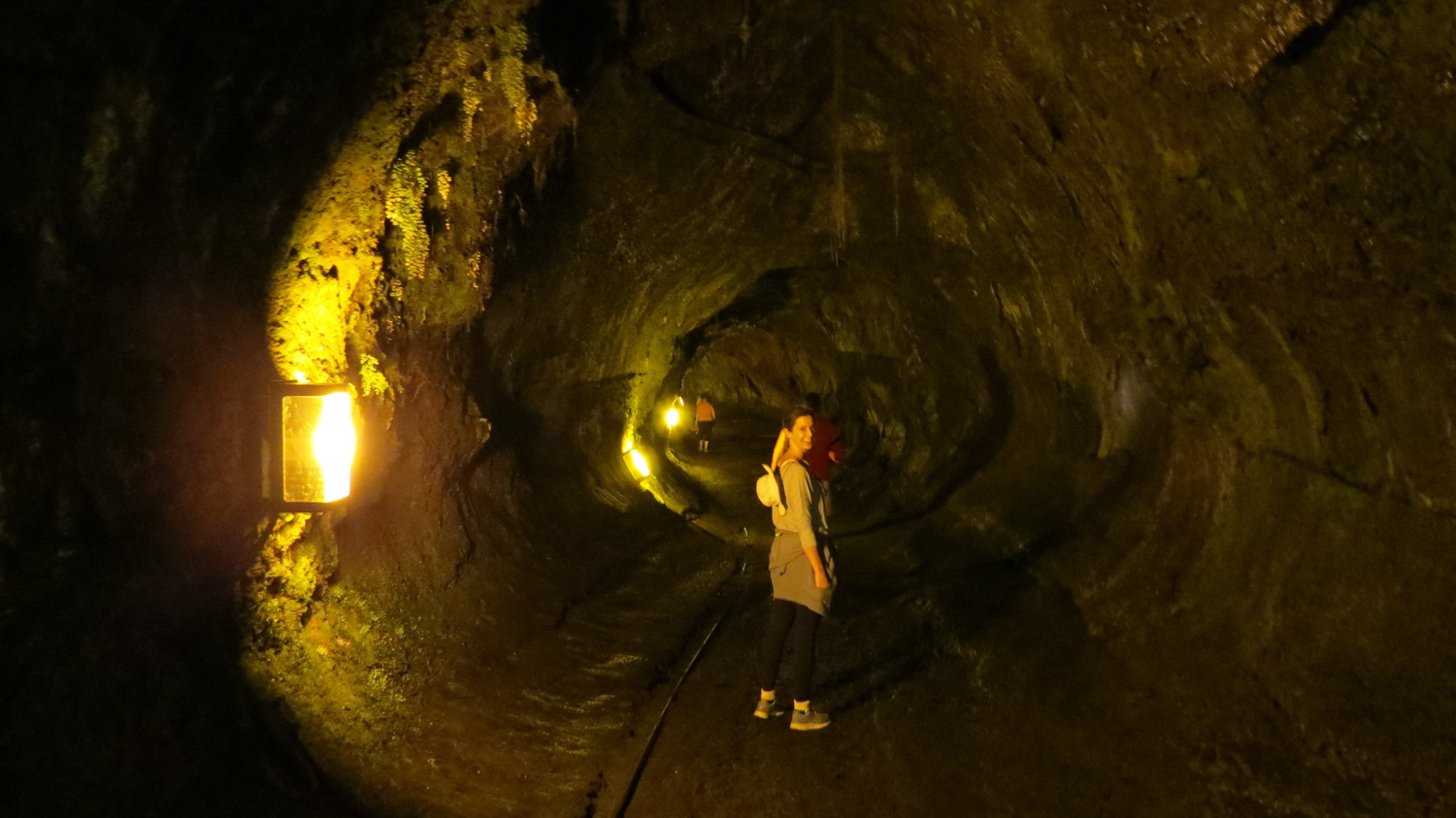 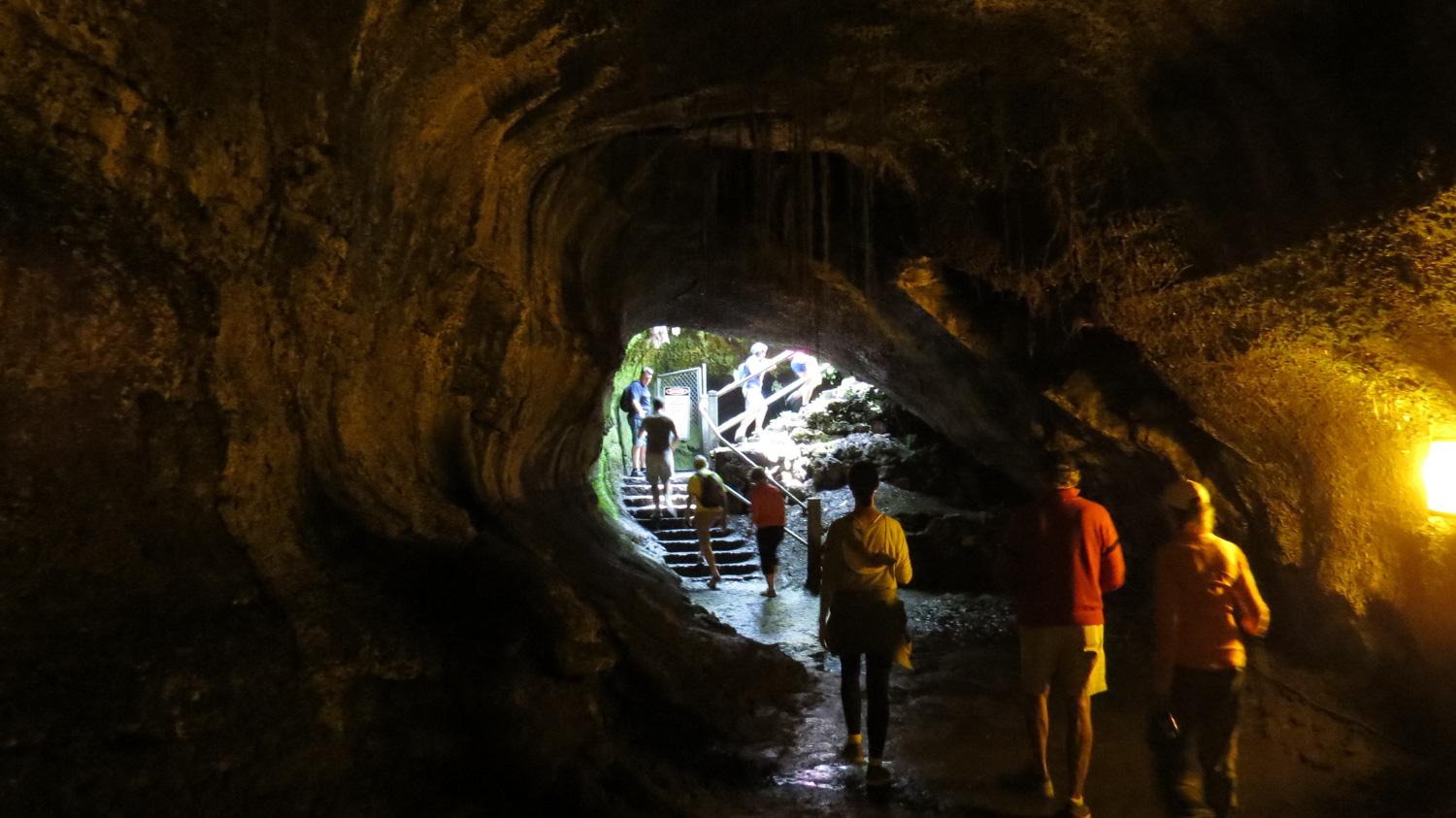 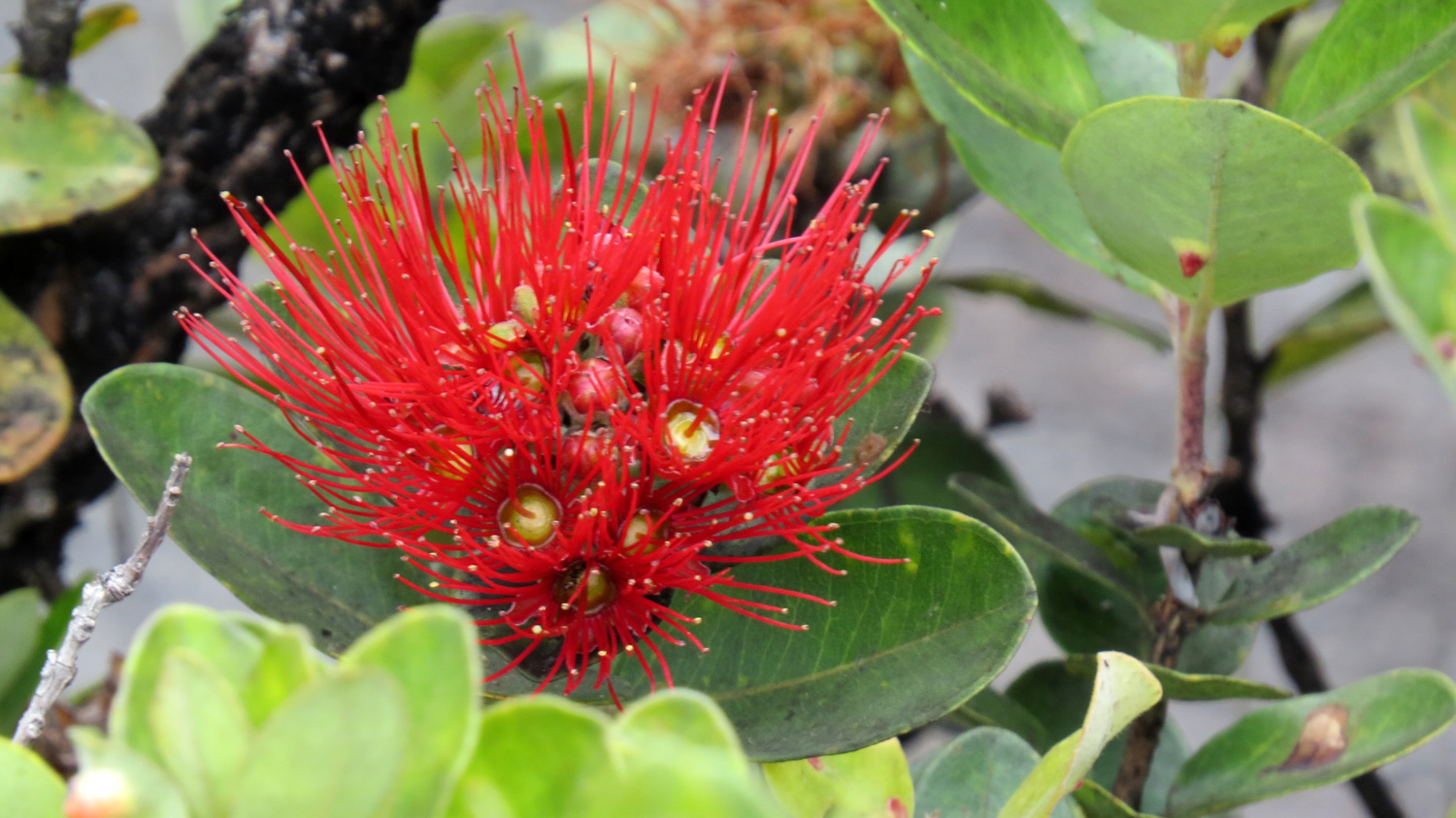 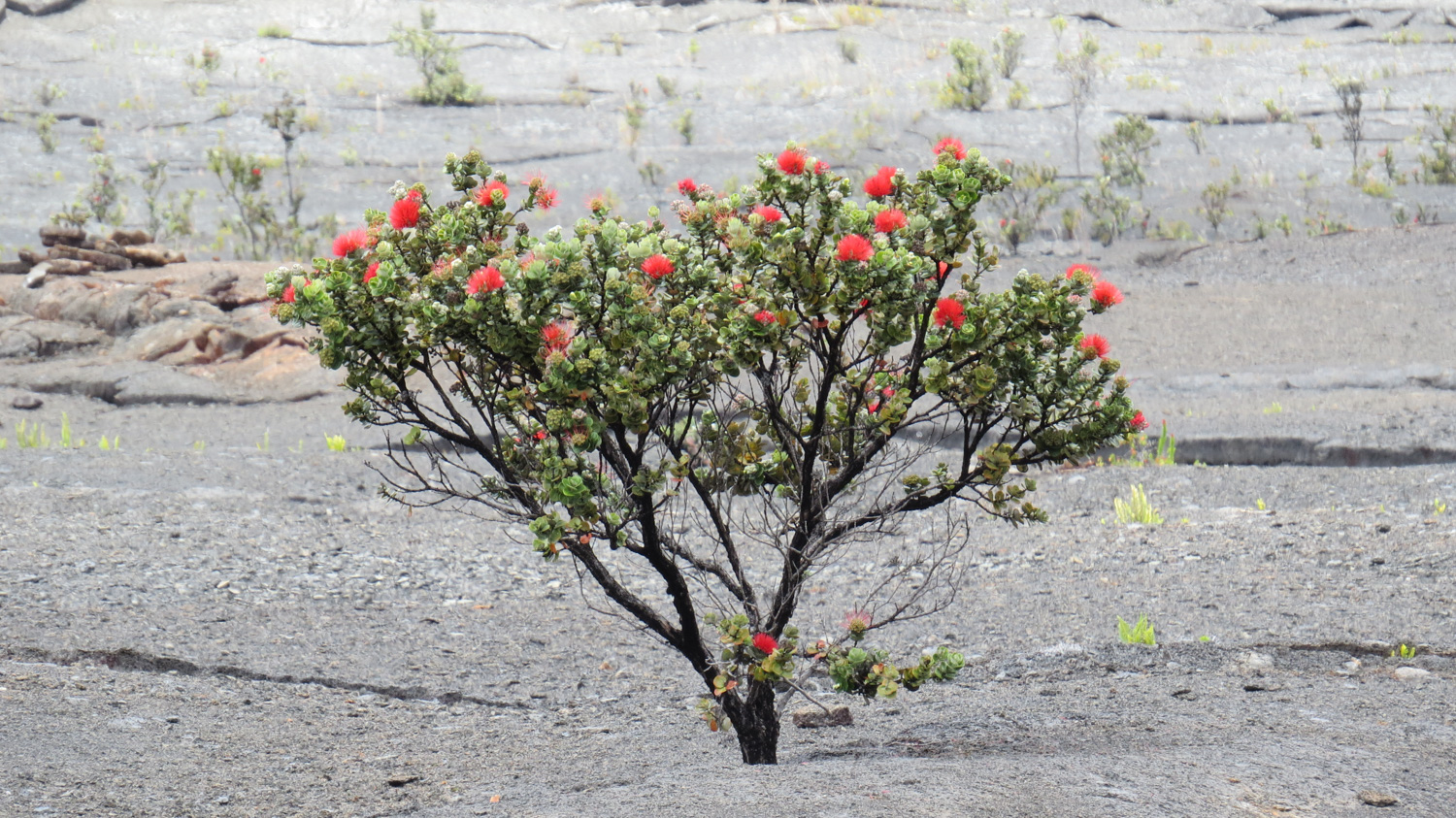 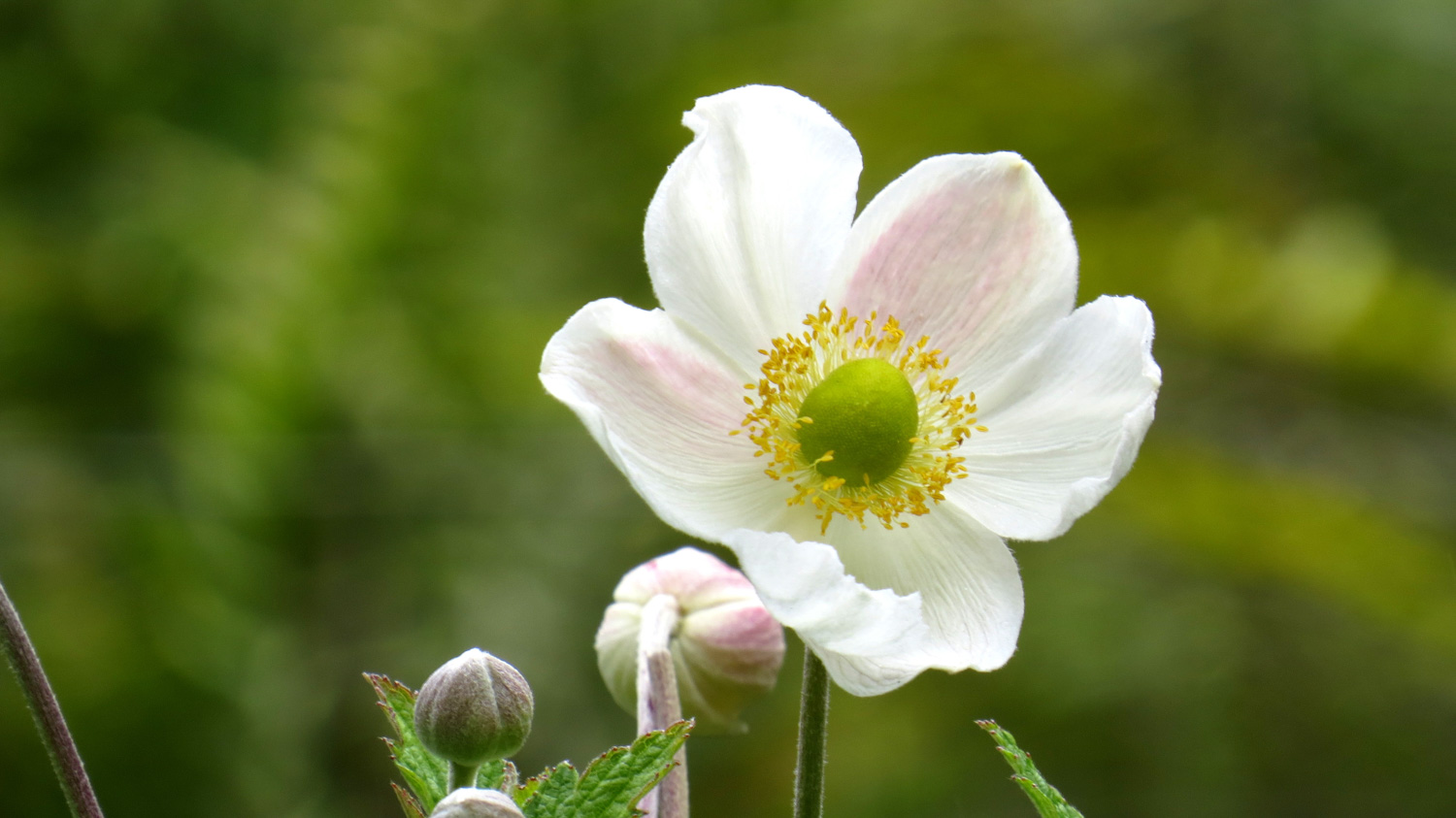 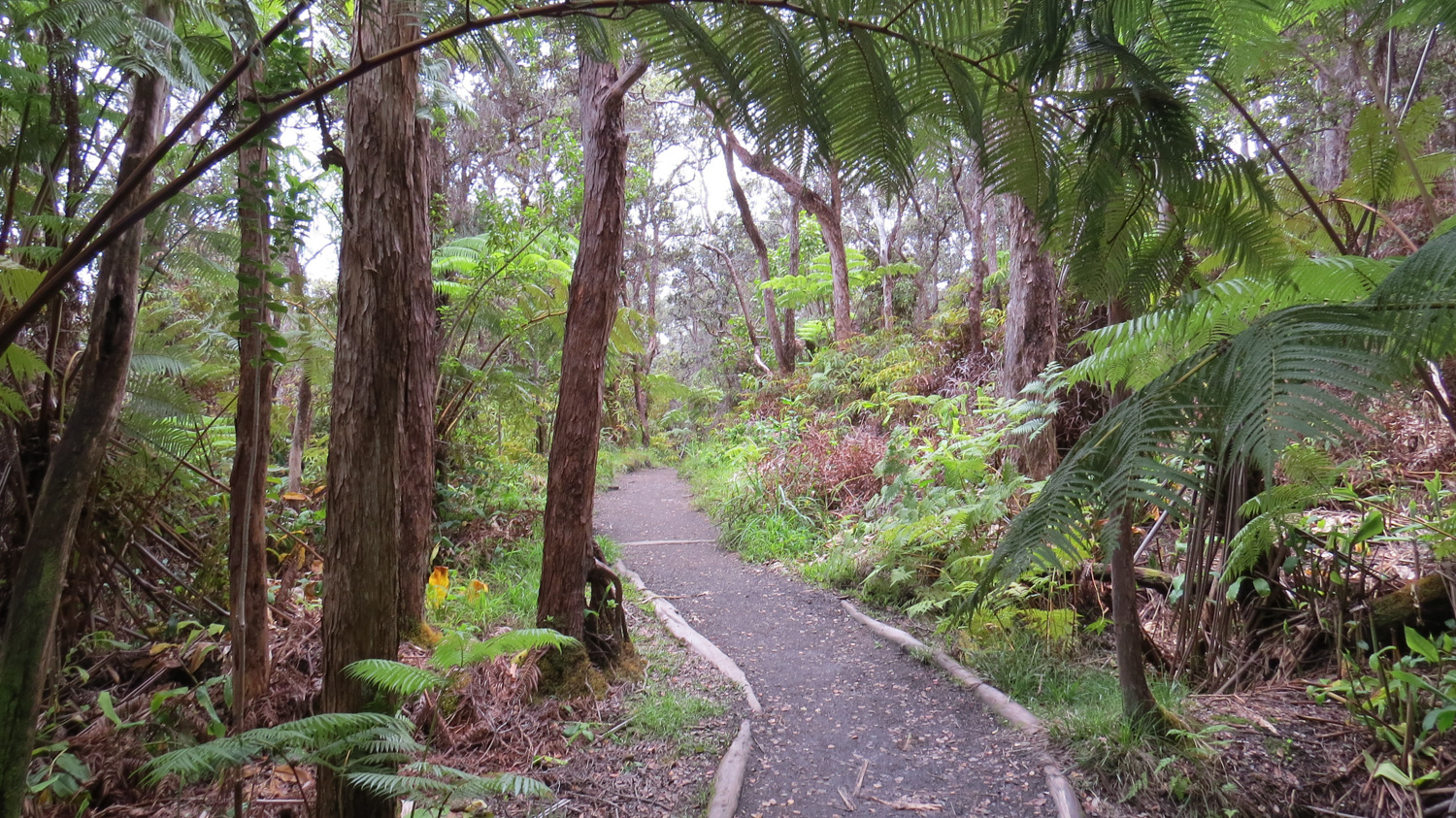 The trail is easy to follow and well-marked. There are a number of spots where roots stick up onto the trail, making it necessary to pay attention. The trail across the crater is a use-path over somewhat uneven terrain. However, it is pretty easy to follow the route due to the heavy traffic it receives. There are a handful of places where un-fenced drop-offs can create a potential hazard for children. Kids should be walked carefully lest they stray too close to the edge and tumble a couple hundred feet down to the bottom of the canyon.

The closest drive-in campground in the park is at Namakanipaio Campground.