Just a short drive or bus trip away from the crazy-charming city of Taxco lies one of the largest cave systems in the world. It’s protected by the Parque Nacional Grutas de Cacahuamilpa, which is also home to the cave system Grutas de Carlos Pacheo as well as several rock climbing routes and a small native garden, a swimming pool, and some campsites. But for most visitors the main attraction is going to be the namesake caves, which are reached with a guide and a 2 kilometer hike into the cave system.

Admission to the caves is purchased at the Park’s Visitor Center for 75 pesos (about $5.70 US). Guided tours leave every hour and it is not possible to explore the cave without a guide. The tours last about two hours and are in Spanish but if you call the park ahead of time (+52 721 104 0156) you may be able to book an English tour for an extra fee. So you can do that, or just do what I did and travel with someone who speaks better Spanish than you.

The tour starts from the Visitor Center and descends along a paved path that enters the canyon and heads toward the cave opening. Along the way you’ll pass a turnoff for a zipline to the cave entrance (it’s very, very short) and the botanical gardens, which are best visited in the summer rainy season. After crossing a footbridge over a deep side canyon and passing the side trail toward the rock climbing and river activity areas of the park, you’ll pass through a vendor area, climb a short staircase, and arrive at the Mouth of Cacahuamilpa. 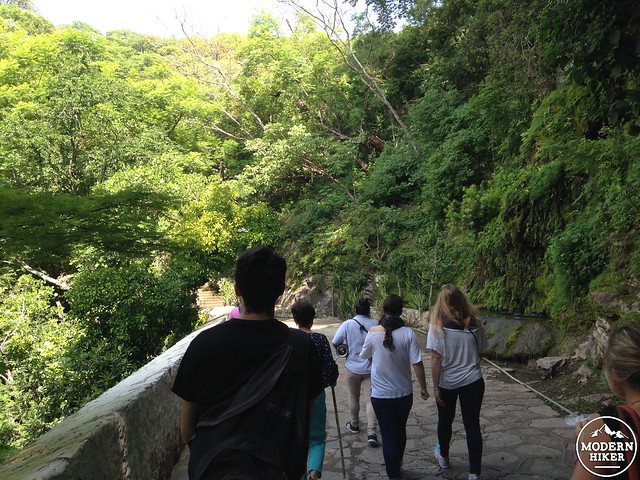 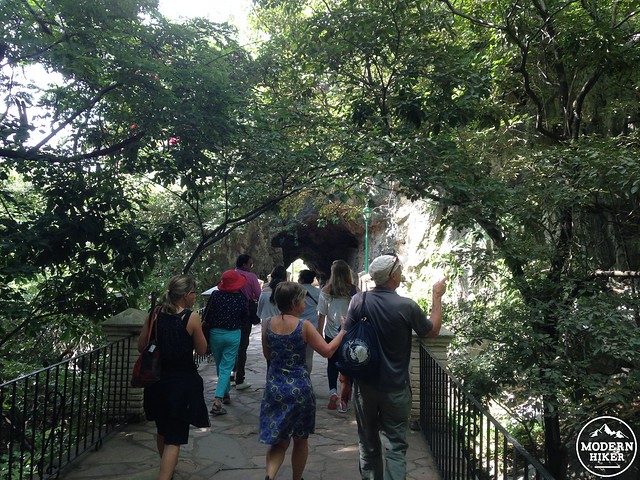 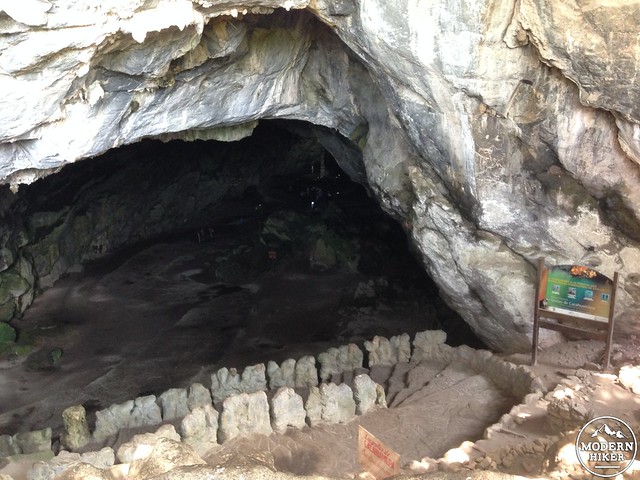 The first thing you’ll notice about the cave mouth is just how huge it is – if you look in that photo, near the center of the cave there’s a bright light – there are about a dozen people taking a group photo in there. The guide will walk you into the first salon – the Chivo – and odds are you’re going to be stunned … even though this is the smallest salon in the cave. 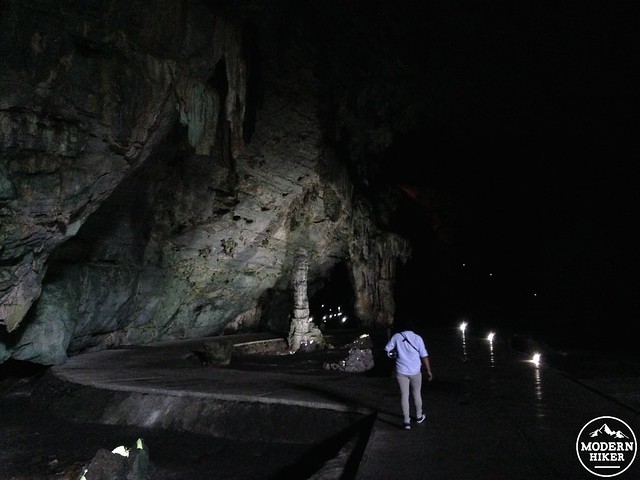 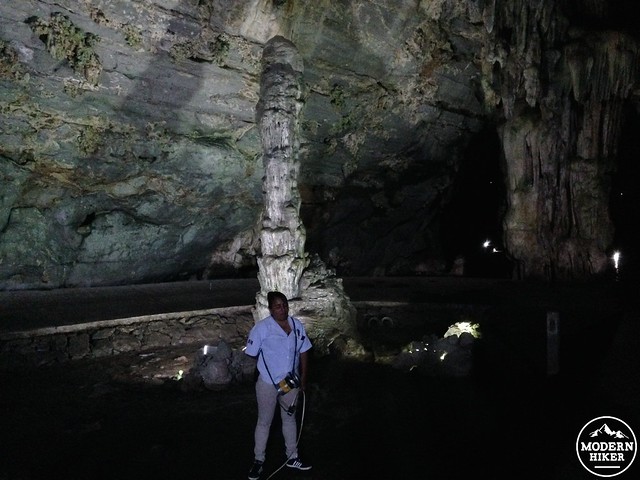 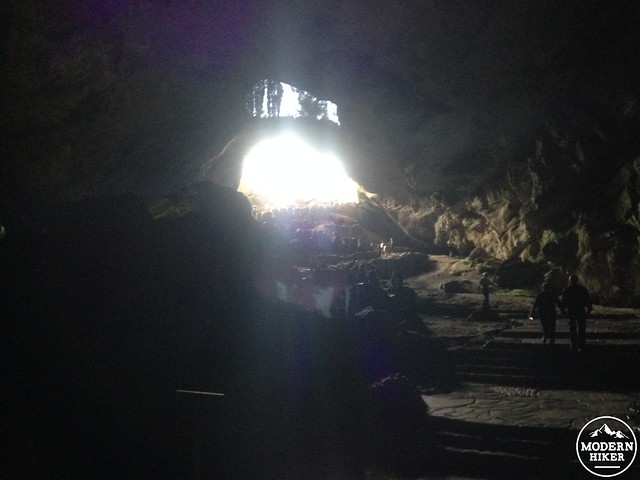 Looking back toward the cave’s mouth

Your guide will walk along the path on the cave floor and occasionally stop to plug in a very large flashlight to better illuminate some of the cave’s more interesting formations – most of which have very colorful names like The Reliquary, The Throne Room, and the Parade Ground. In addition, as the tour continues, the guide will also turn on a series of particularly placed lights to illuminate the different salons. Sometimes the names and lights (especially when they’re colored like Christmas lights) can lean a little on the tourist-attraction side of things, but I’d be lying if I said that every time our guide turned on a new set of lights I didn’t gasp at the new sights they revealed. 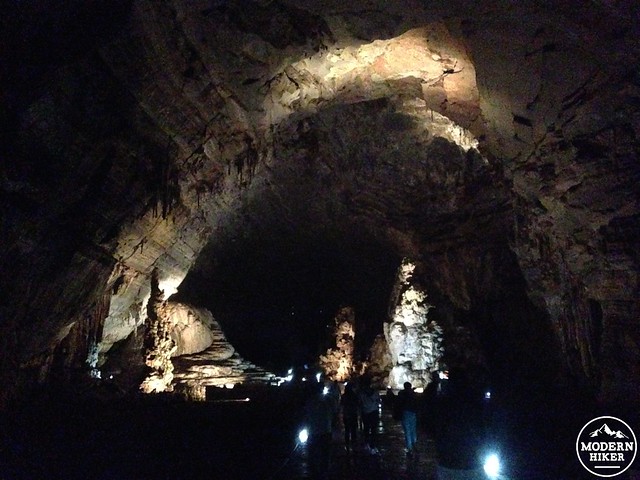 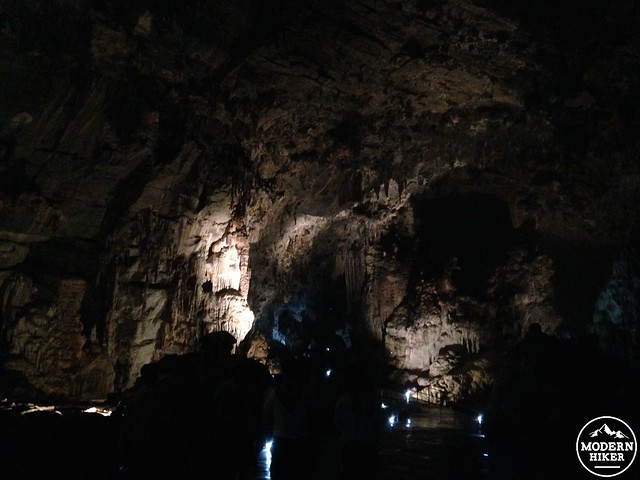 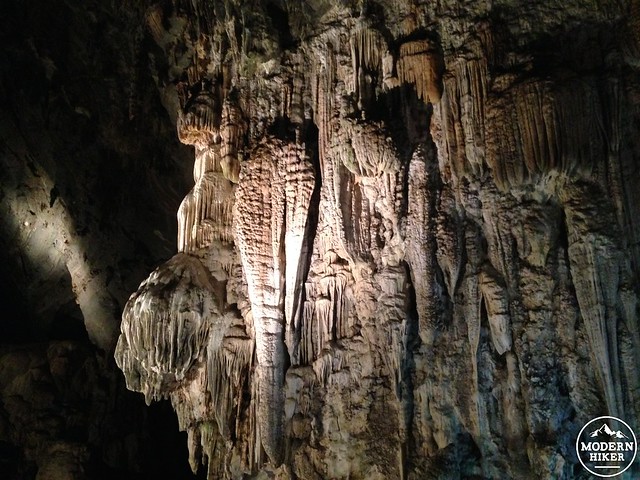 Cacahuamilpa is what’s known as a “live” cave, which means that groundwater is still seeping into the formation, building new stalactites and stalagmites and enlarging the cave salons. There are certain areas where the cave floods during heavy rains – and even if it’s not raining you’re likely to hear (or feel) water dripping through the limestone and into the cave itself.

There is also, oddly enough, a very large salon that has had some seating added to it. This is used throughout the year for concerts of all types, including pop bands, orchestras, and opera singers. The acoustics of the area are supposed to be amazing, but all we could do test them with was our voices. I did, however, manage to find this short video of a small string orchestra playing inside the caves:

Another interesting part of the tour is when you pass a pile of boulders with a small wooden cross above them. An English explorer was investigating the caves with his dog in the 18th century when he was injured and became unable to move. His dog left the cave to try to find help but because the locals had never seen a dog come out of the cave before – and surely not helped by the dog’s likely frantic behavior – the dog was said to be possessed and no one would follow it into the cave. The dog did eventually return to its master inside the cave and a later expedition found the two and buried them side by side.

The tour continues, passing shapes both small and impossibly large – and the salons you enter become enormous – the largest is 265 feet tall. Your group will no doubt be filled with various oohs and aahs as different parts of the cave are illuminated or plunged into darkness.

The cave system has about 90 (!) salons but only the first 20 have been fully explored and opened to the public. When the tour reaches the final salon, your guide will bid you farewell (remember to tip) and you’ll be on your own for the walk back out to the surface. 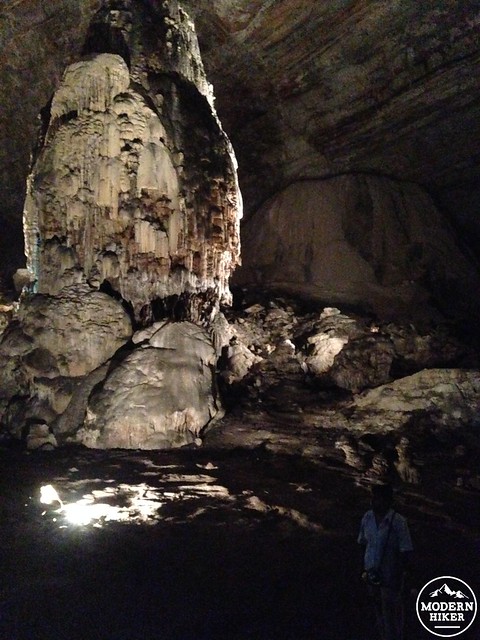 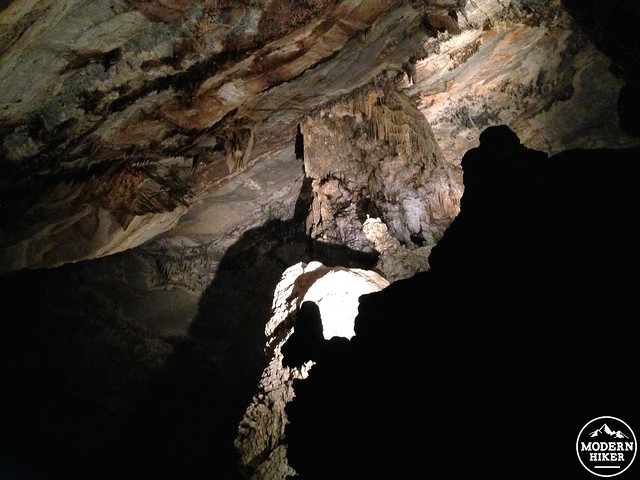 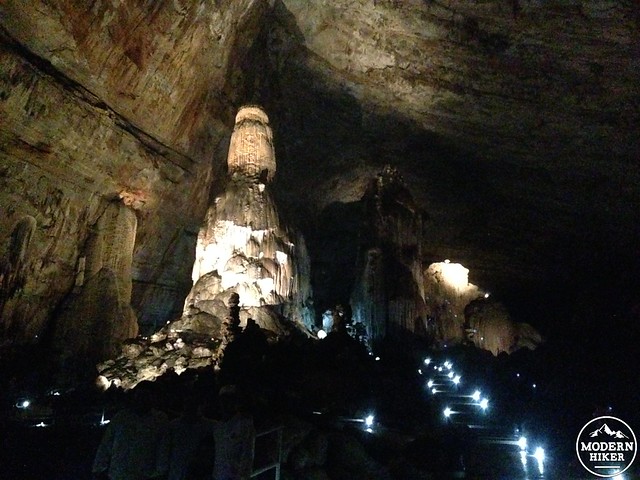 The walk back out on your own is when you can really take your time, go at your own pace, and let the strangeness of the cave environment sink in. It also helps that most of the ambient light is gone – so while you won’t be able to see quite as many of the salon roofs, you’ll appreciate the silence and calmness instead.

No one’s rushing you out of the cave, either – so if you want to bring down some photography gear and really take your time setting up some long exposures, you’ll get much better photos than I got. And if not, you’ll still have an amazing time and an incredibly unique experience. 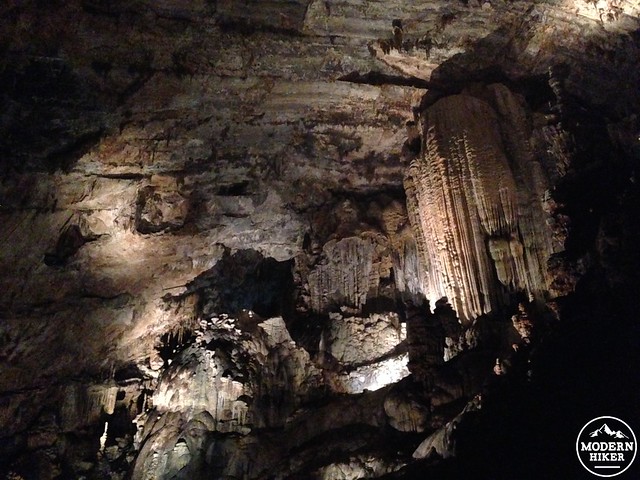 Excellent. The walking route is mostly paved and lit along the way. The cave is wet, however, and the path may be slippery at times.

The caves are great - even if you only understand about half of what the guide is telling you in Spanish :).

Taxco is a beautiful city. I can't wait to go back - enjoy!

I love Taxco. I'm sitting here on the terrace now in Taxco, and the view is amazing. I'm going to check out these caves!!

I'm looking forward to another visit so I can explore some of those canyons, too. We stayed at a hostel in Taxco and absolutely loved it - what a beautiful city!

I have been there many times since my family lives near taxco!