When thinking about SoCal’s five major counties and their respective natural treasures, the one that always seems left out is Orange County. Not only is Orange SoCal’s smallest county, it is also its most thoroughly developed. For anybody who has ever spent a long afternoon on the 405 in Costa Mesa, it might seem natural to wonder whether there’s any nature in Orange County at all. The good news is that there is a lot more than you would think. 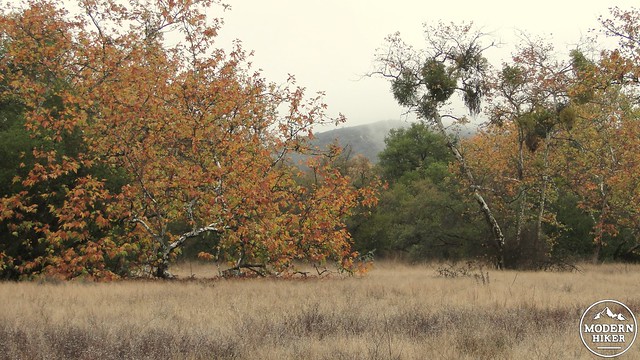 Some of the best can be found in Bell Canyon at Caspers Wilderness Park. This mostly flat section of the park is full of swaying grasses, sycamores rustling in the breeze, and frequent crossings of the usually-dry Bell Creek. The gentle terrain and beautiful scenery make this a great hike for most ages and skill levels. It is the sort of low-effort, high-reward hike that can appeal to just about everybody. 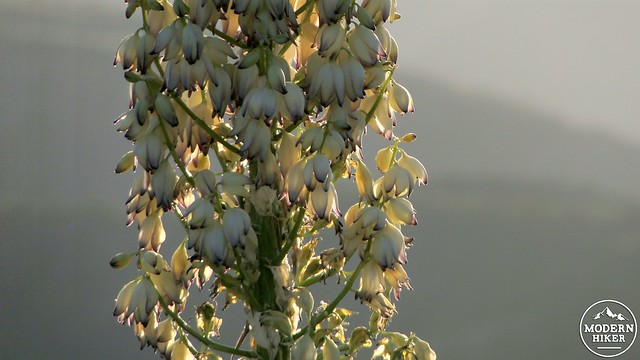 The park’s history follows a fairly typical pattern of indigenous peoples being ousted and succeeded by Spanish and Mexican rancheros and missionaries, only to be later supplanted by European settlers, who eventually spared small parcels of land from relentless suburban development. A band of the Juaneno Indians originally lived in San Juan and Bell Canyons before the land was claimed in the name of Spain. Businessmen from San Francisco then purchased the land and converted it into a cattle ranch owned by the Starr Family. The ranch was deeded to the Starr Foundation, which still manages nearby land in conjunction with the Audubon Society. The county purchased the remainder of the land under the guidance of Ronald Caspers, for whom the park is named. The park now contains campgrounds, equestrian staging, and 30 miles of hiking trails. 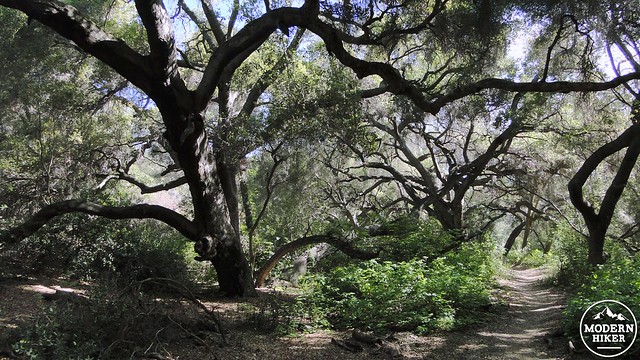 After paying the modest fee at the gate ($3 during the week and $5 of Saturdays and Sundays at the time of this writing) and leaving your car parking lot at the end of the road, make your way toward the signed Oak Loop Nature Trail and plunge quickly into a corridor of gnarled coast live oaks. These oaks are among the finest in the park, and their spreading branches shade out the heat on warm days. This section of trail provides a good illustration into the oak tree’s tactic of utilizing minimal trunk space and maximum branches. This tactic allows the tree to cover as much area, and therefore get as much sun exposure as possible while minimizing the volume of wood that needs to consume water. Combined with deep roots tapping into the water table, this “spreading” strategy allows Southern California’s oak trees to maximize sunlight while utilizing minimal water. Also note the waxy, brittle leaves, which minimize evaporation and allow the oak to maintain most of its leaves through summer droughts. 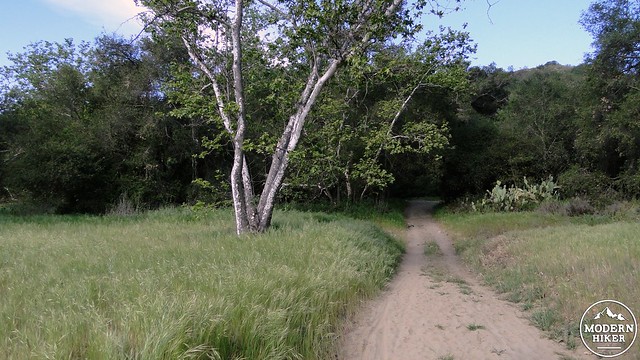 After passing the Star Rise Trail, the Oak Trail with merge into the Bell Canyon Trail. From here, you will leave the tunnel-like expanse of oaks and emerge into more open and sunnier woodlands. This open area is best described as a savanna, as it is a wide, grassy area that supports clusters of trees. During late spring, you’ll find yourself passing through high grasses rippling in the breeze while towering sycamores with their huge leaves provide deep pools of shade. Sycamore trees reach deep into the water table, but unlike the coast live oak, it drops its leaves late in fall and re-grows them in early Spring, making it one of the few native deciduous trees in California. Deciduous trees are not conservative when it comes to water, so nearly all deciduous trees are found along watercourses. Higher altitude black oaks are the main exception. 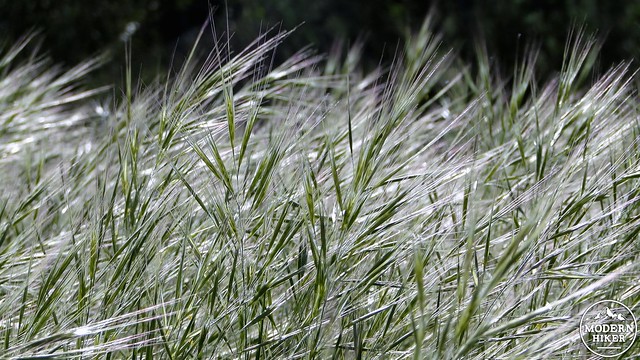 Grass that ripples in the breeze

After crossing the bed of the creek and emerging onto a fire road, you can continue you toward the boundary gate with Starr Ranch, which is closed to the public by a gate that is marked unambiguously with no-trespassing signs. This section isn’t included in this track, and adding it on will increase the distance on this hike by 1 mile with no additional gain. Should you skip this section, turn right onto the Oso trail and begin following it through more woodland until it begins to rise up through scrub-covered slopes. Views across the canyon through which you just walked open up on your right. These views are particularly enjoyable during fall, when sycamore leaves turn a vivid orange, especially after a rain. After gaining 200’, the trail comes to a junction allowing a merge onto the Bell Canyon Spur or to continue on to the more strenuous Oso Trail. 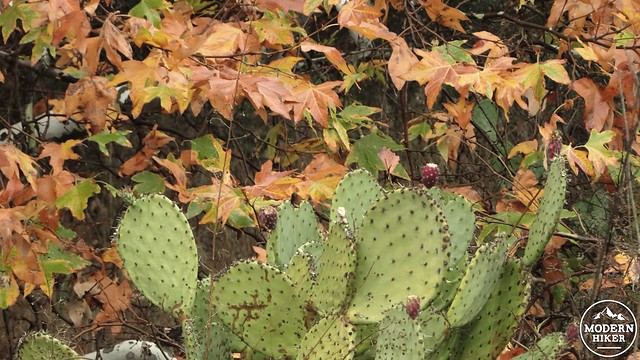 Leaving Oso Trail for another day, descend gradually down the Cougar Pass Trail. This fire road will gradually bring you back down onto the floor of the canyon and onto the Bell Canyon Trail. You can continue to follow the fire road, but there are more interesting options on single track that complete the nature trail loop of which the oak loop is the first part. This trail stays mostly on the dry creek bed, which is thick with growths of willows and prickly pear cactus. This sunny segment re-emerges near the parking lot at an equestrian staging area. From here, follow the road back to the lot and call it a day. 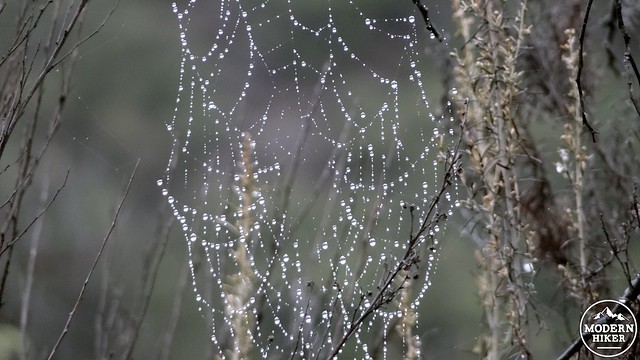 Things to know:
– Caspers Wilderness Park features three separate campgrounds, with one specifically devoted to equestrians. They are popular, so it’s best to book in advance.

– Equestrian campgrounds mean equestrians on the trail. Horses are rarely ever a problem on trails, but it’s a good idea to talk a bit when encountering them so that they’re sure you’re a human. Other horse riders have told me to do this, and it seems sensible. They spook.

– Dogs are not welcome in this “Wilderness.” This wilderness park does not follow the rules of Federal or State Wilderness designations, which forbid any mechanized transportation, while occasionally allowing dogs. One may debate whether mountain bikers or dogs have a more detrimental effect on the environment, but the rule is what it is. 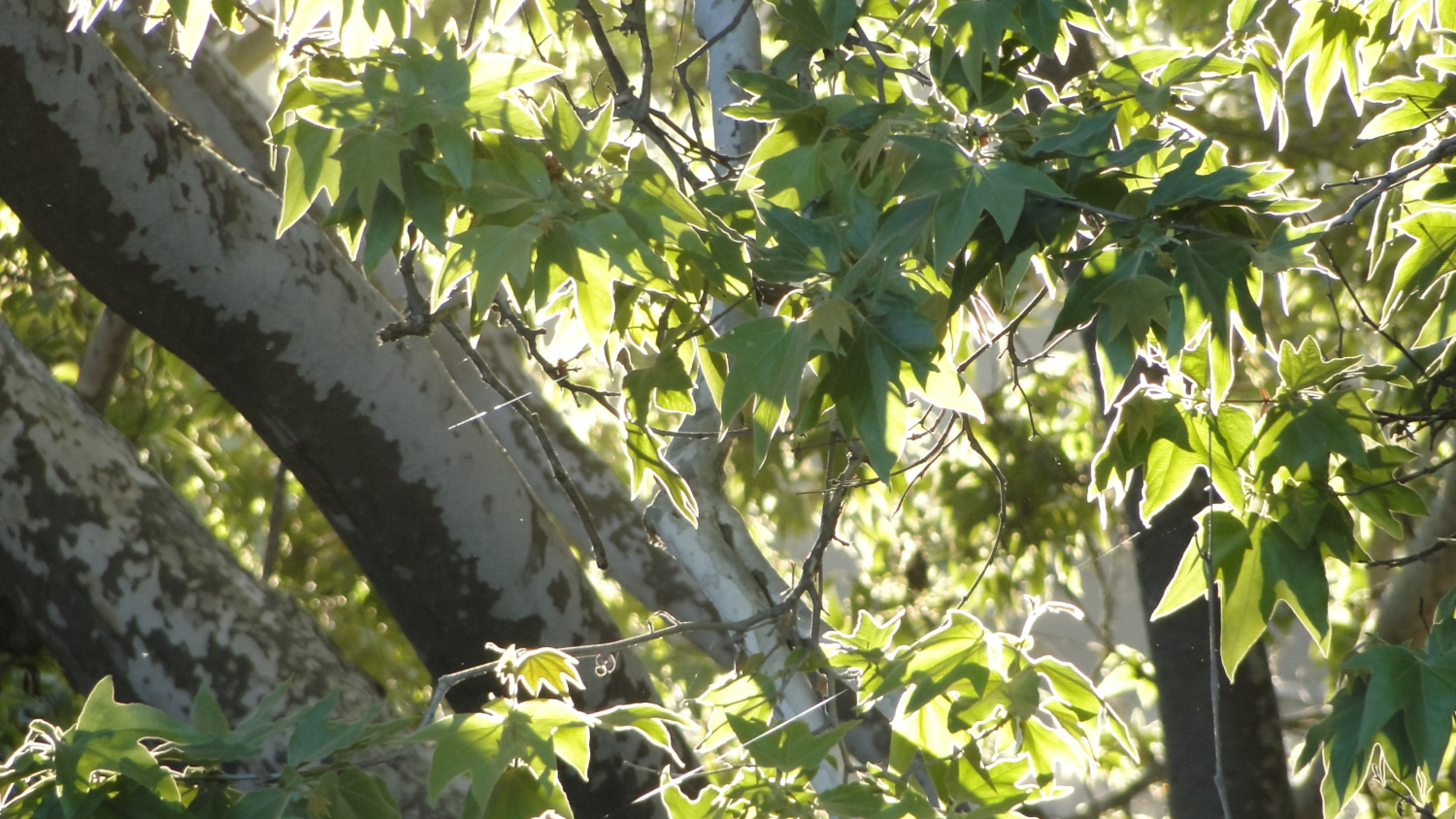 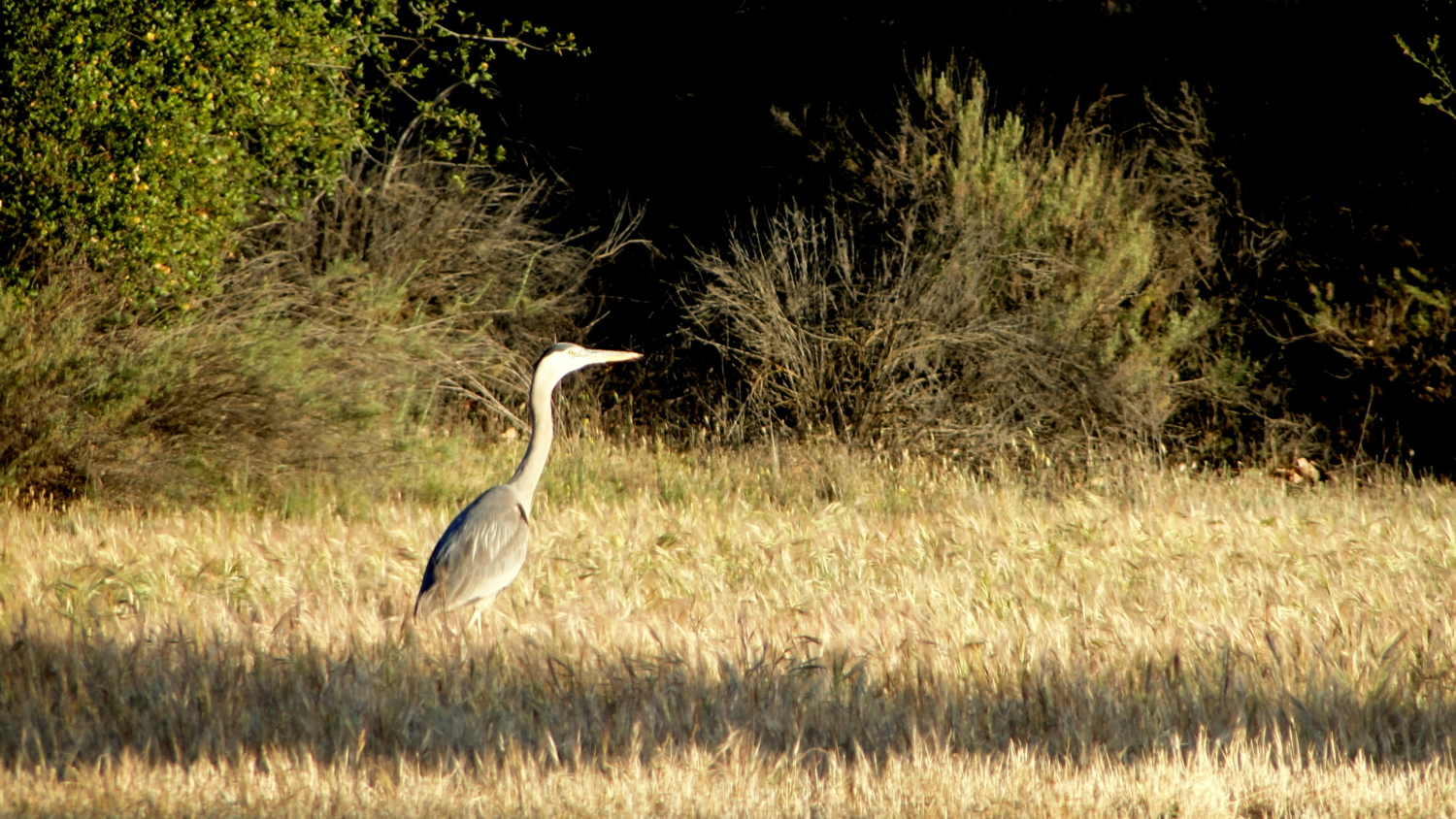 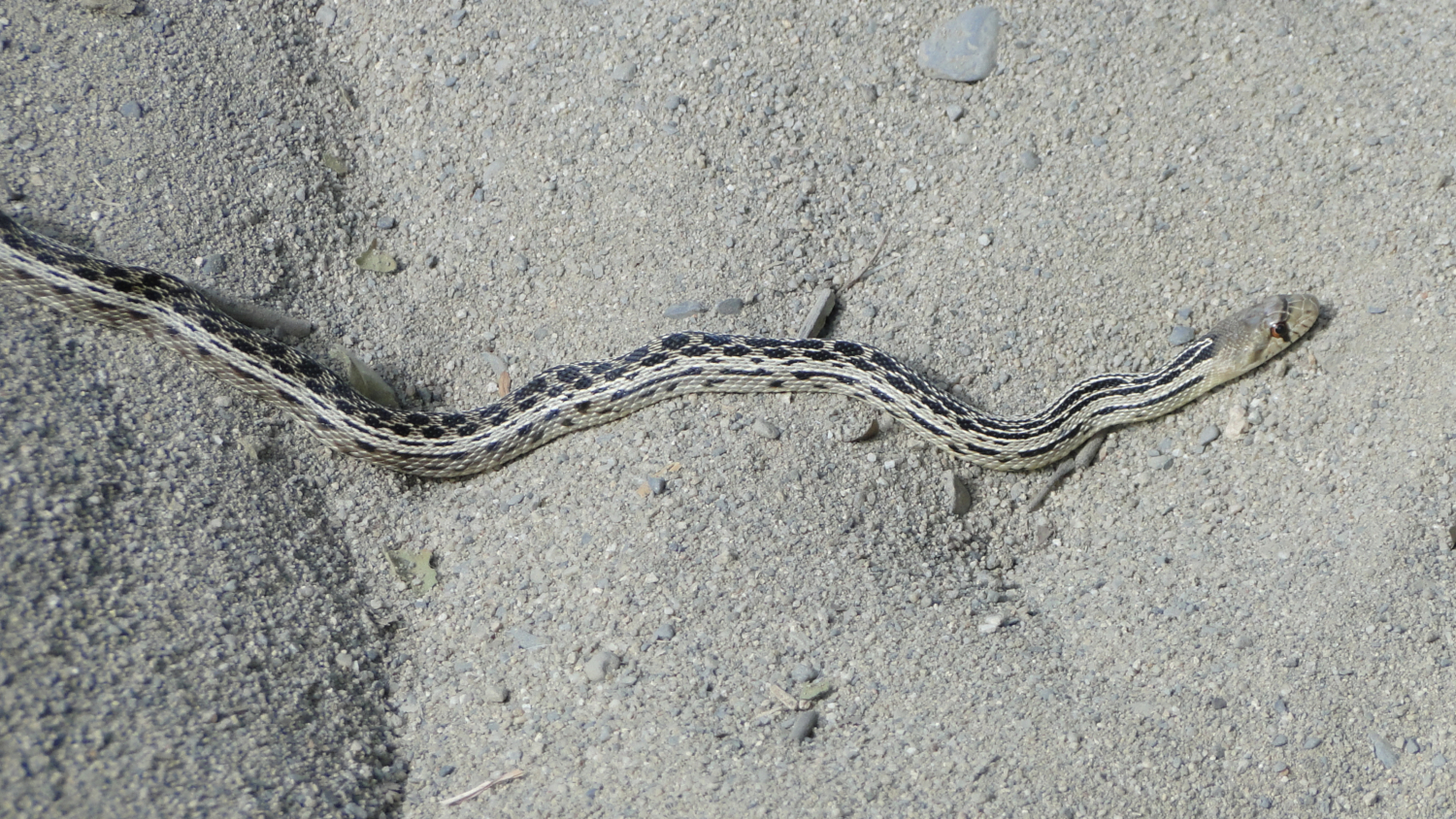 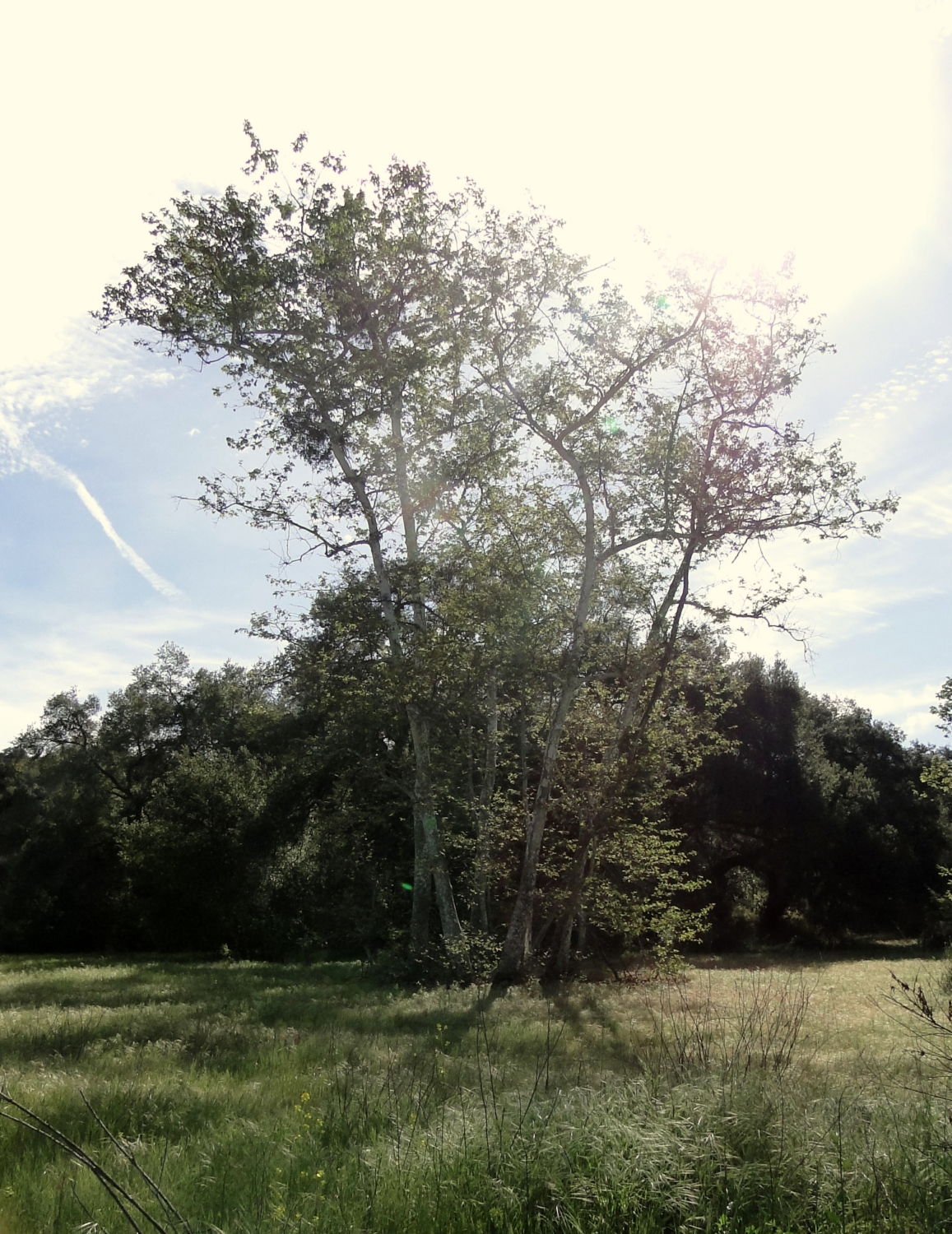 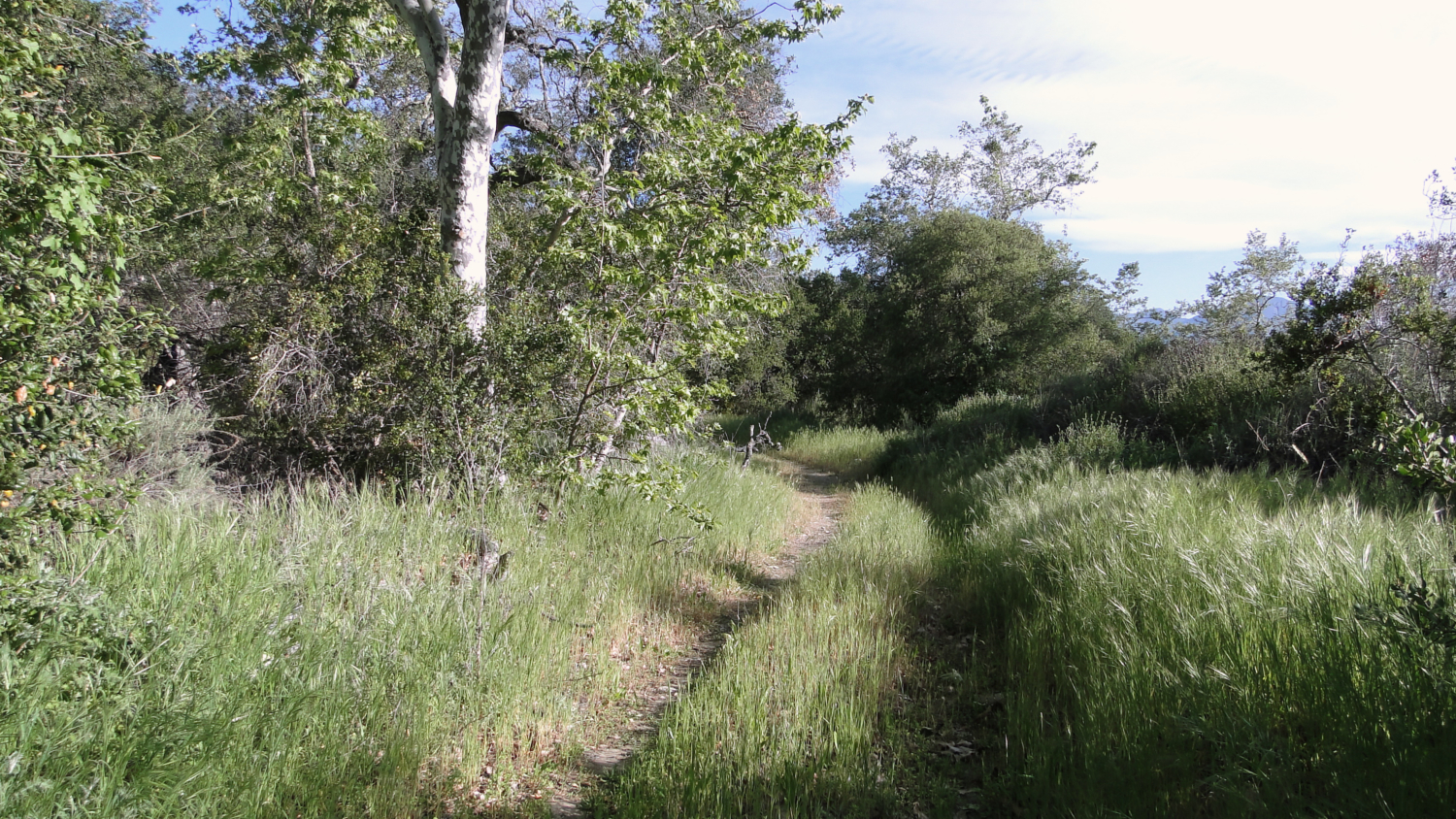 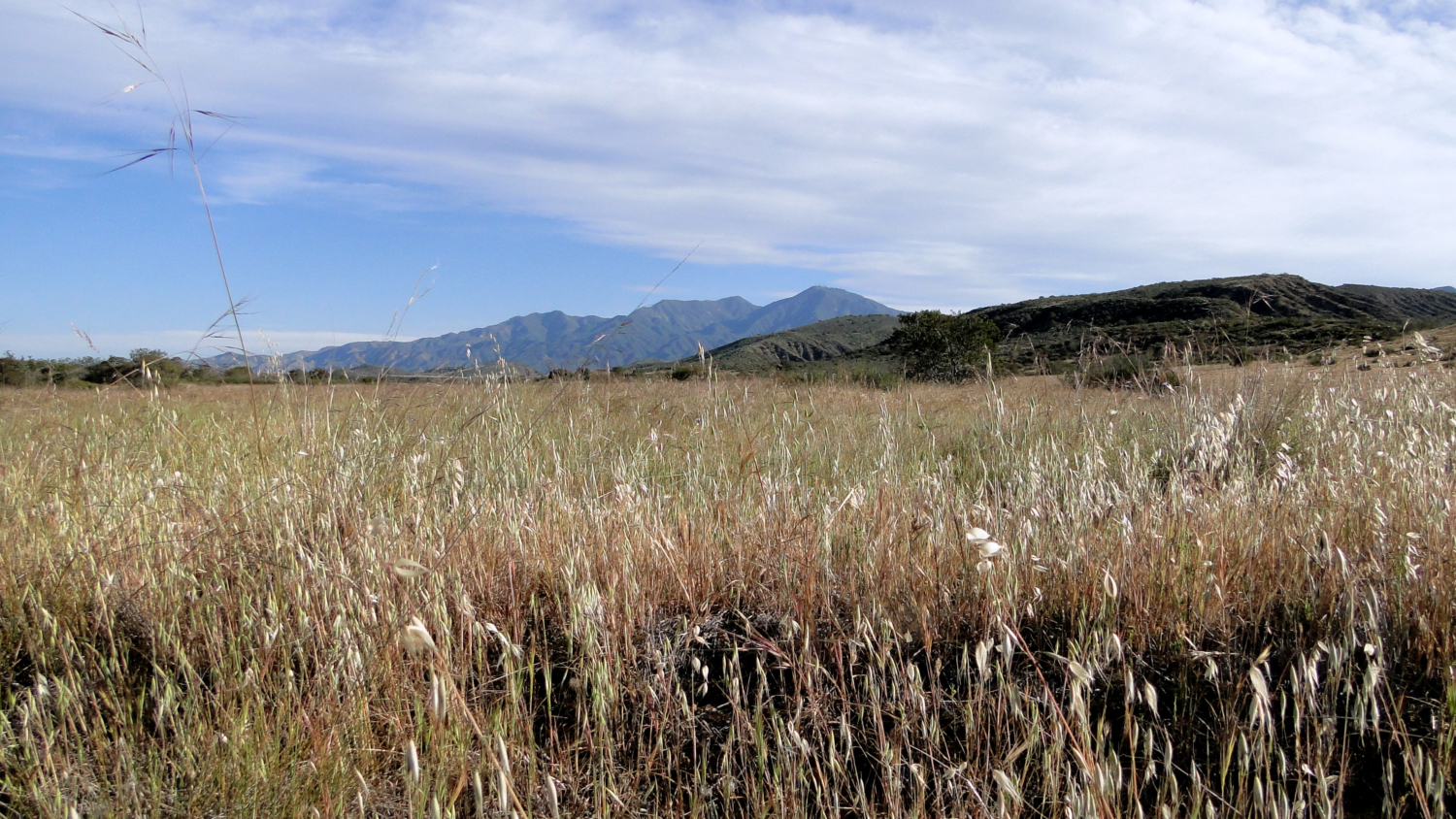 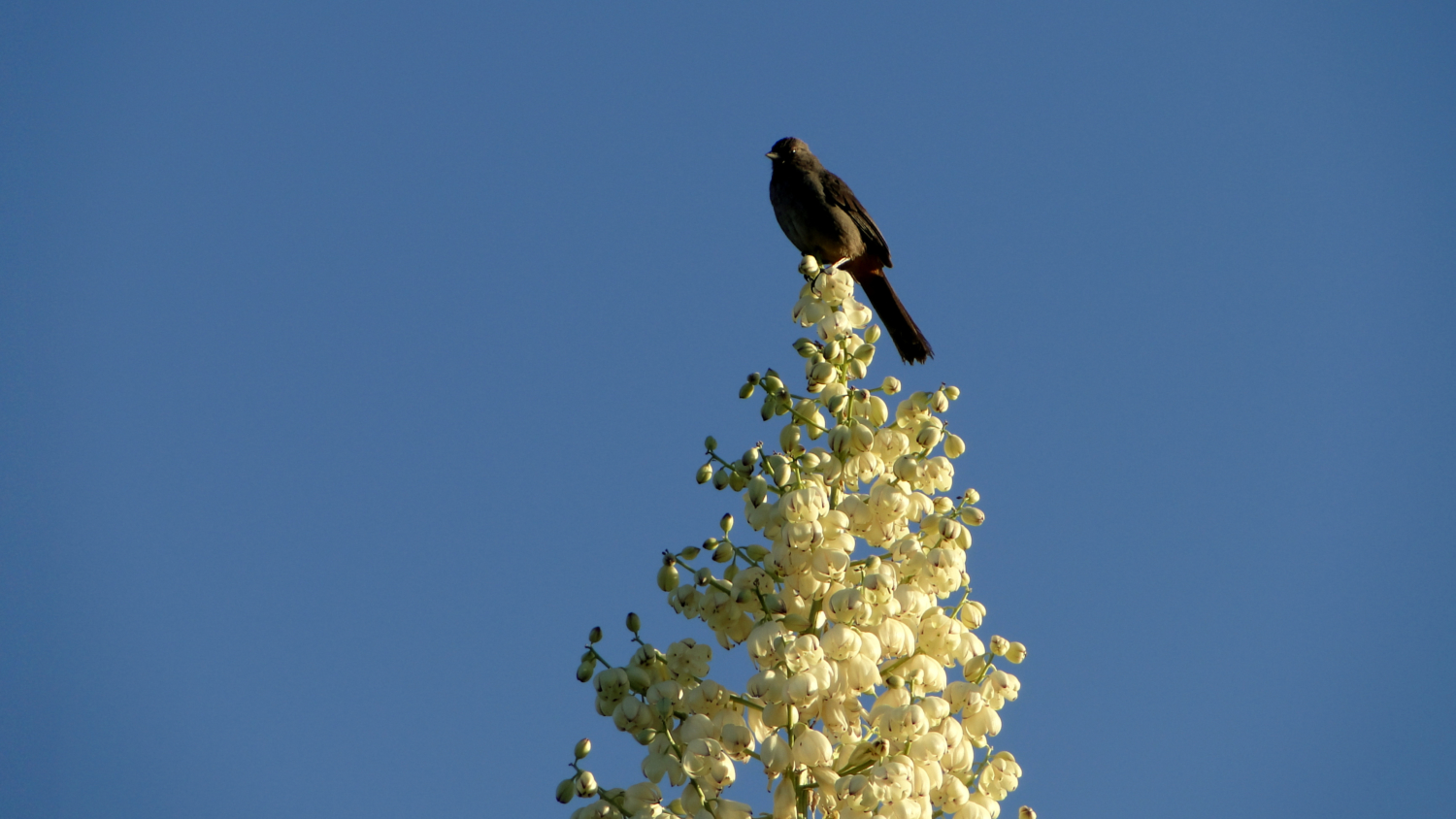 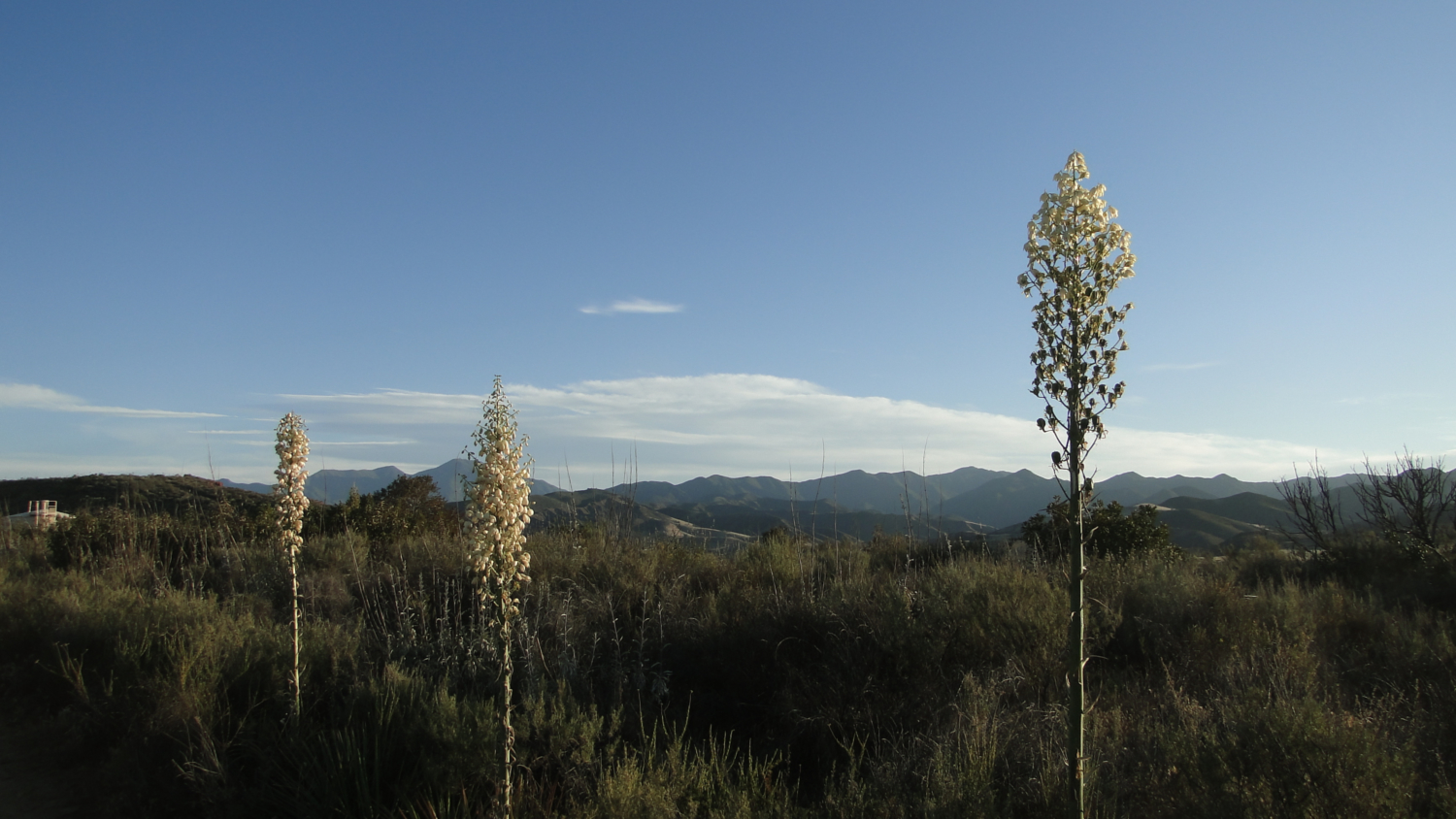 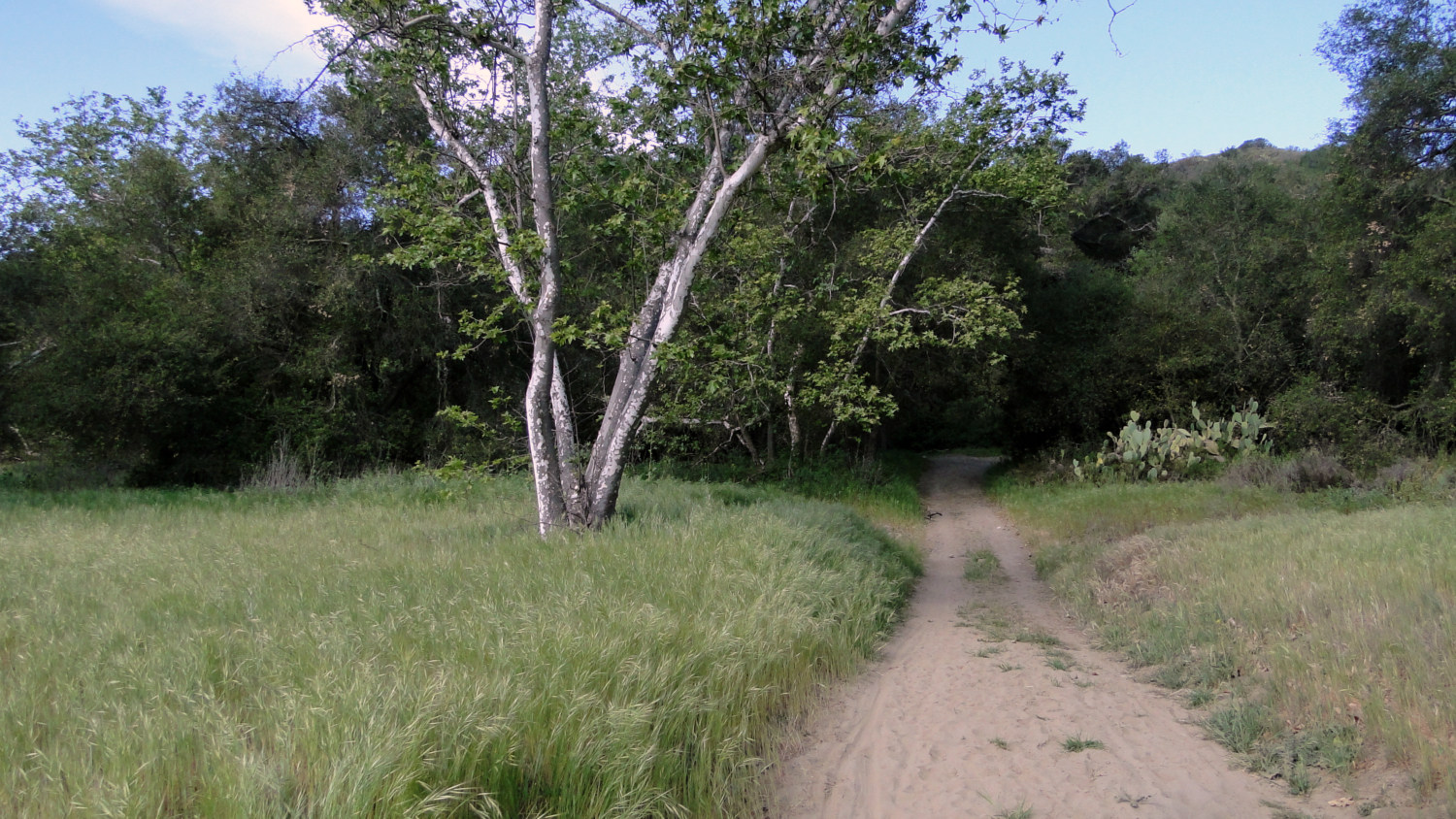 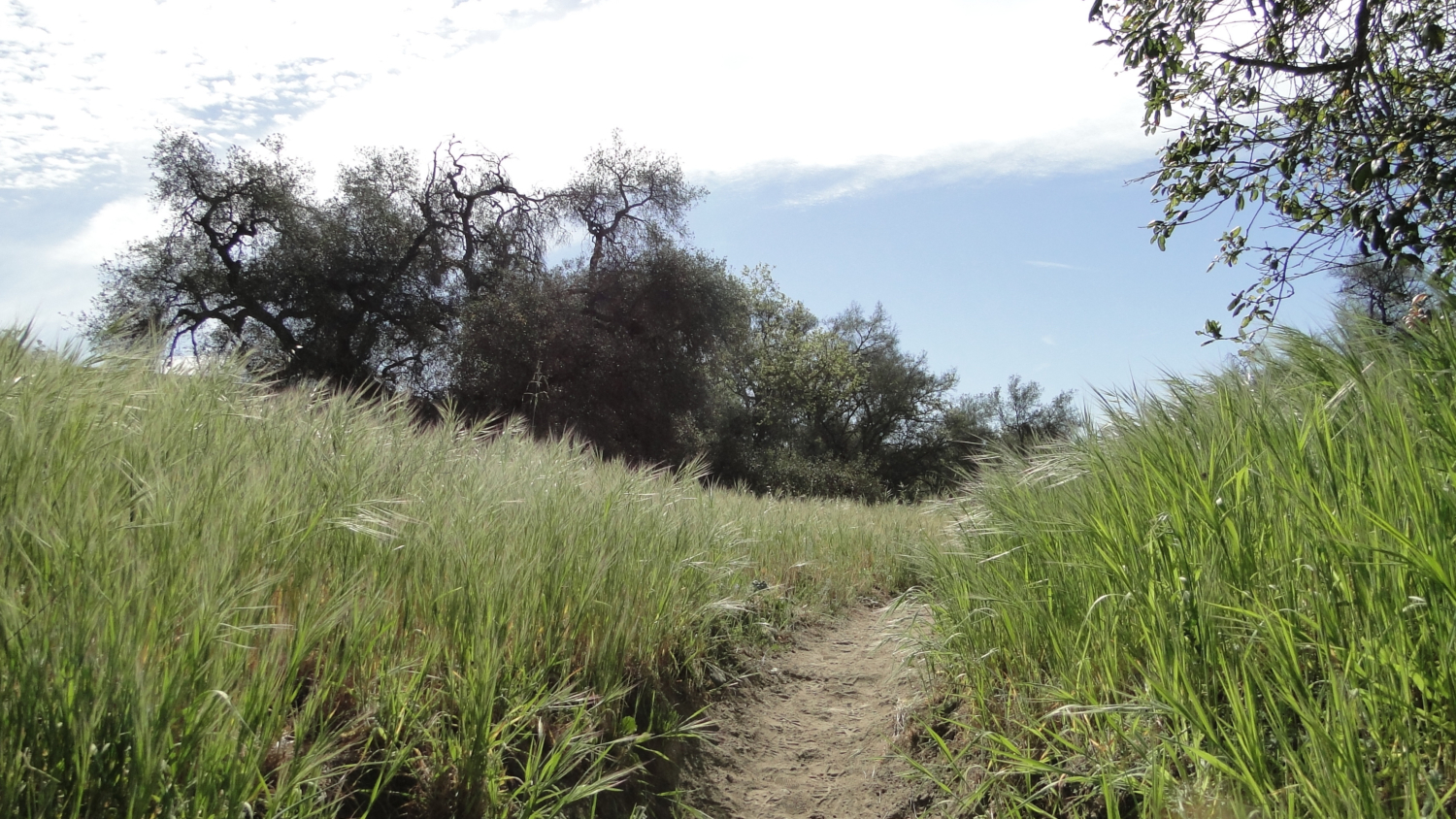 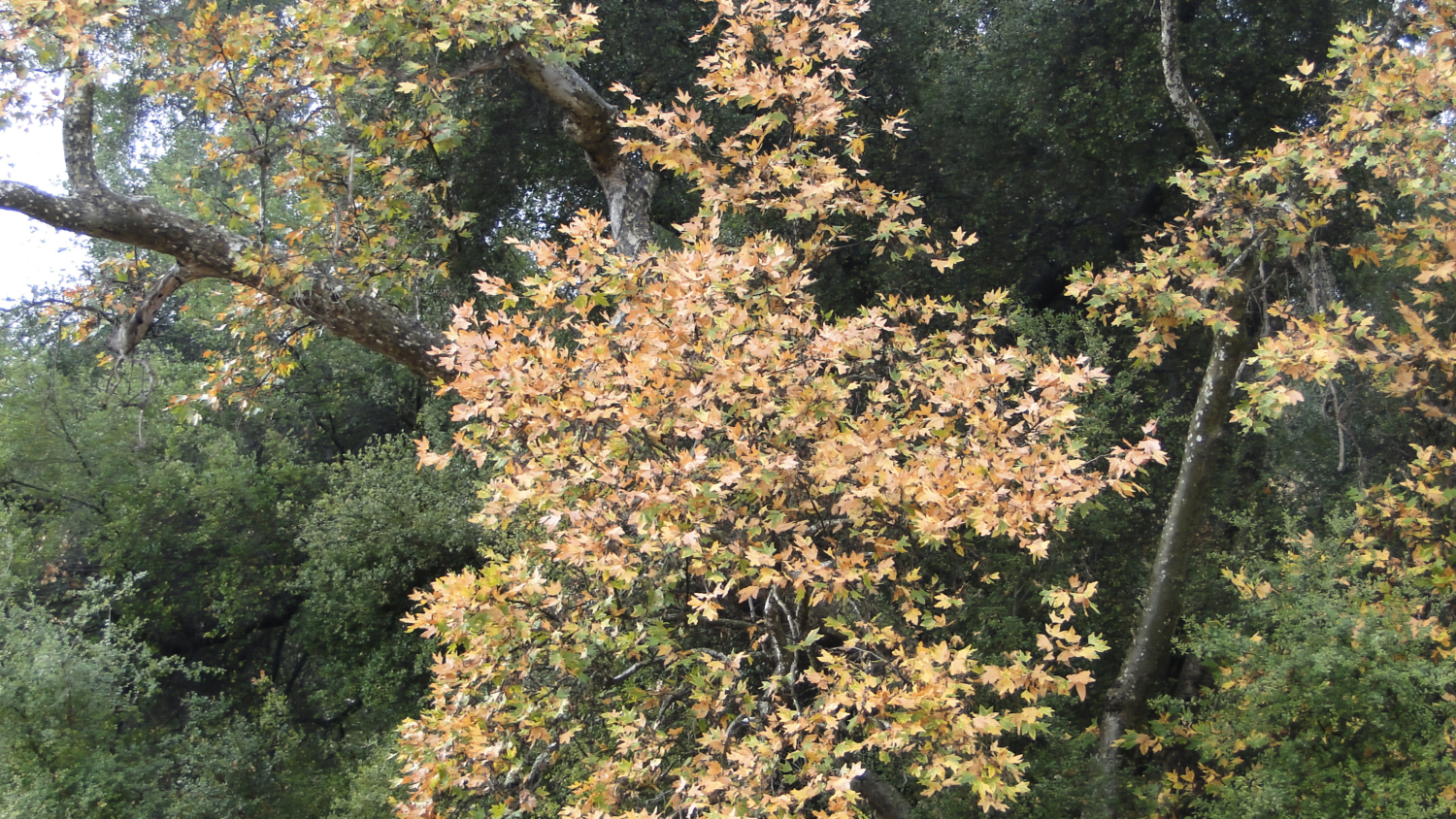 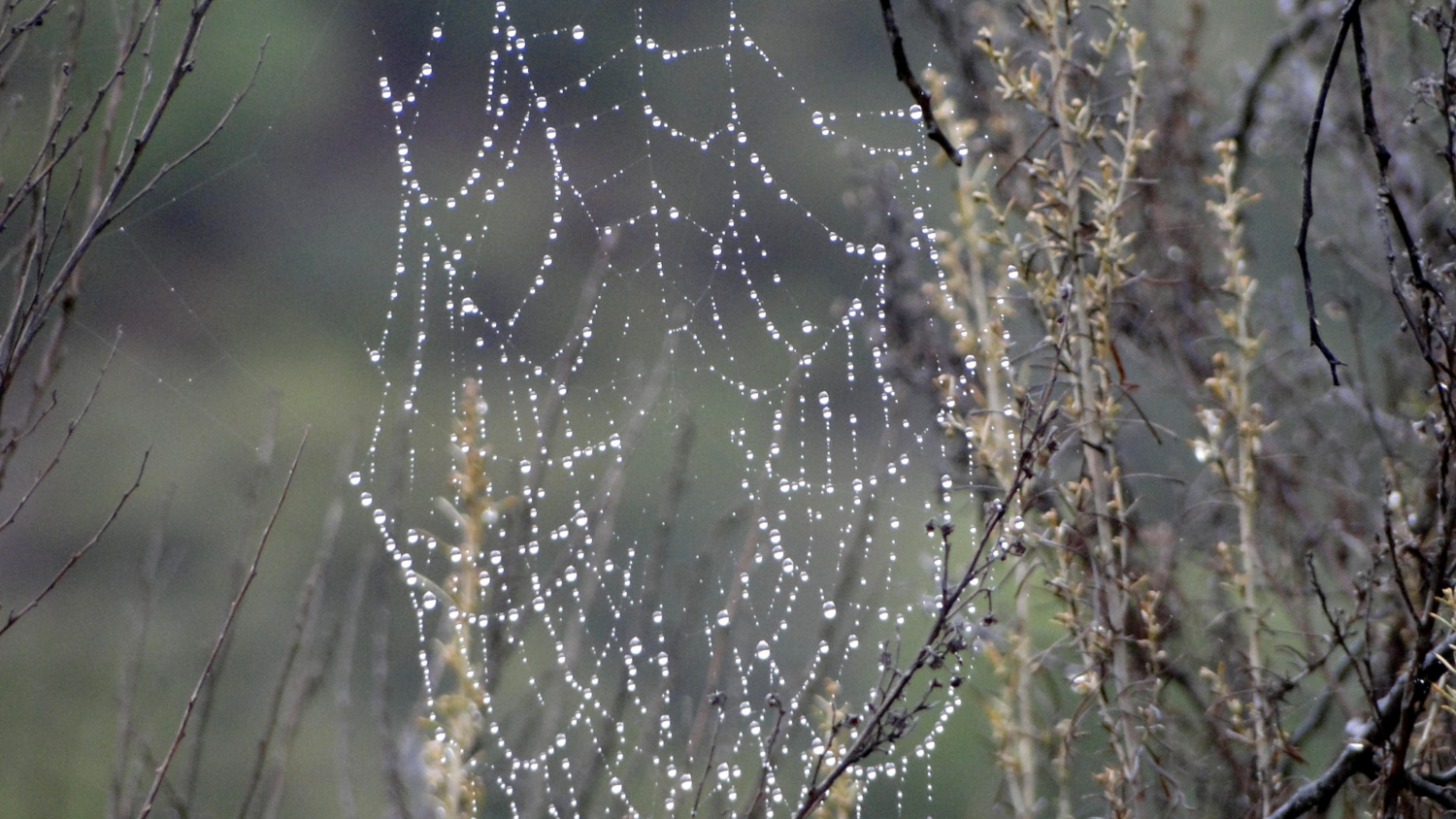 The trail is well-maintained and easy to follow. The last time I was here (December 2013), the park had bulldozed one of its fire roads, making it a muddy, unsightly mess. The rest of the trail is smooth sailing.

From Interstate 5, exit at Ortega Highway (74), turn left if coming from the north and right if coming from the south. Head east on 74 for 7.5 miles until you come to the sign indicating Ronald Caspers Wilderness Park. Turn left, pay the fee, and follow the road to its end near some horse stables.