Years before the creation of Kings Canyon National Park, two families by the name of McRae and Murphy faced monetary issues that left them in dire financial straits. With only minimal incomes, their primary asset was a large, isolated sequoia grove nestled within a spacious canyon. While the groves within the canyon had been partially logged years before, the owners had successfully preserved most of the grove in a relatively pristine state, especially when compared to the extirpated groves north of Grant Grove. Acknowledged as the largest of all sequoia groves, larger even than Giant Forest and the widely developed Mountain Home Grove, Redwood Canyon’s future now depended on the McRaes’ and Murphys’ decision to either exploit the timber or sell the land. 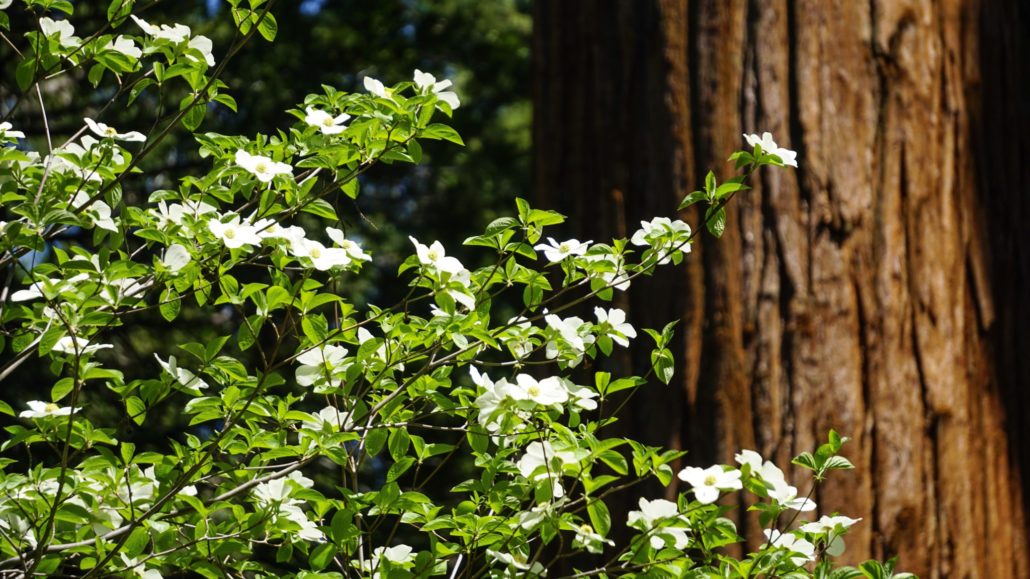 The families ultimately accepted the government’s offer of $645,750 to purchase the 2,680 acres of sequoia forest. With the addition of several other purchases of surrounding land, legislators were able to annex Redwood Canyon into the new park, connecting Grant Grove to Sequoia National Park at the boundary of the North Fork Kaweah River south of what is now Dorst Creek Campground. 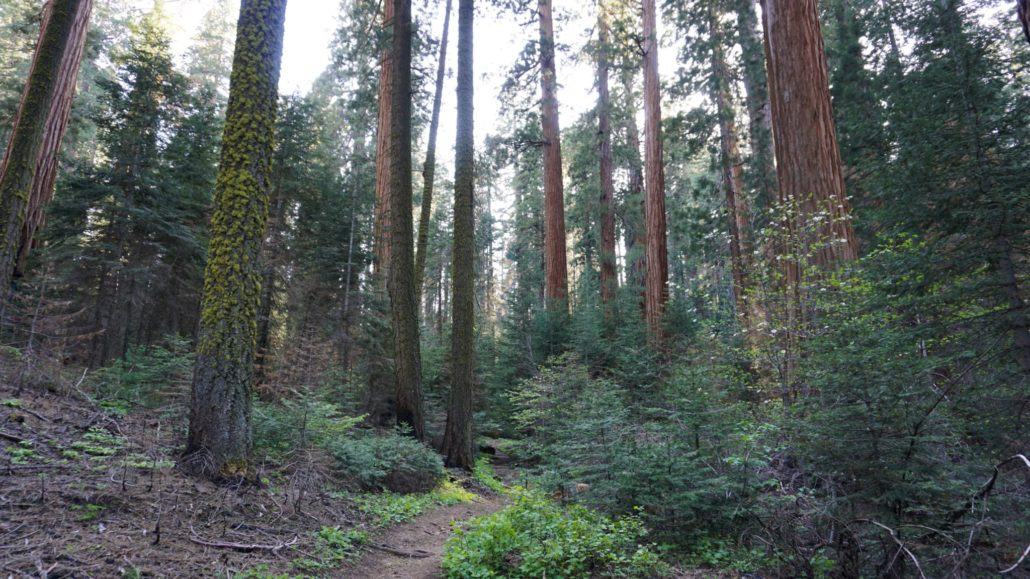 Although Redwood Canyon contains the largest of the sequoia groves by virtue of its acreage, it lacks many of the big trees you would expect to encounter in the Giant Forest to the south. Of course, “big trees” is a relative term as even an average sequoia is still larger than nearly every other tree on the planet. One notable exception, the Hart Tree at the, err, heart of this loop, stands as the 21st largest sequoia in the world. This impressive specimen is just one of the highlights along loop, which includes numerous trickling creeks, a small meadow, a small waterfall, a massive fallen tree, a few logging curiosities, and a lush canopy of deciduous dogwoods lining the banks of Redwood Creek. 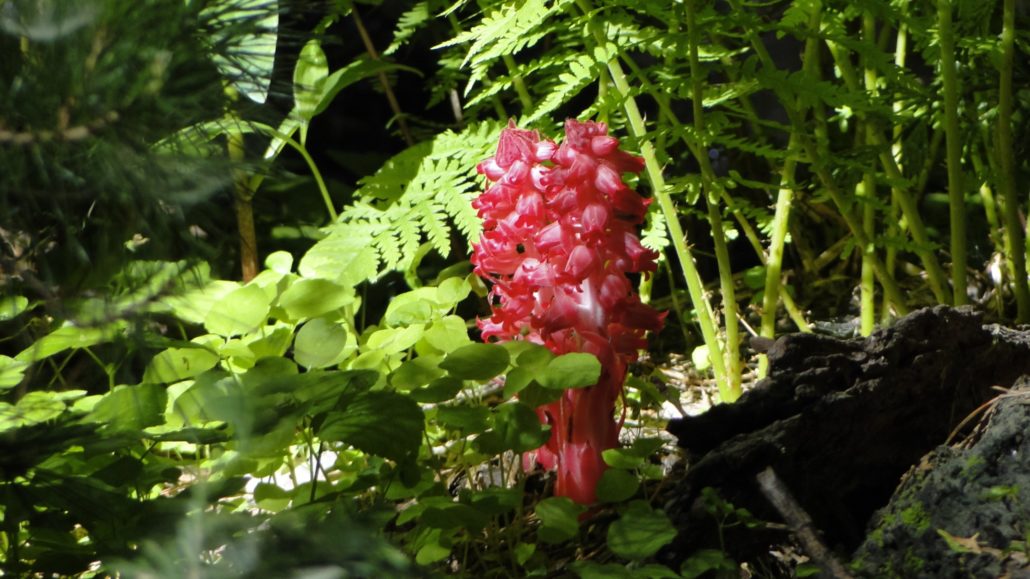 For backpackers interested in camping beneath sequoias, note that Sequoia-Kings Canyon National Parks have recently revamped their permit system. Instead of the old “spend the day waiting for your fax to go through” system, the new 3-step process requires you to fill out the application and then email it to the park. After that, you receive a confirmation email indicating that you have the reservation. After that, you go to a government pay site to pay for the permit. Remember that the permit reservation is insufficient as a permit. You will still need to pick up your permit from the Grant Grove Ranger Station either on the day before your hike or the day of your hike. This handy webpage allows you to see what kind of availability remains at each of Sequoia-Kings Canyon’s trailheads. 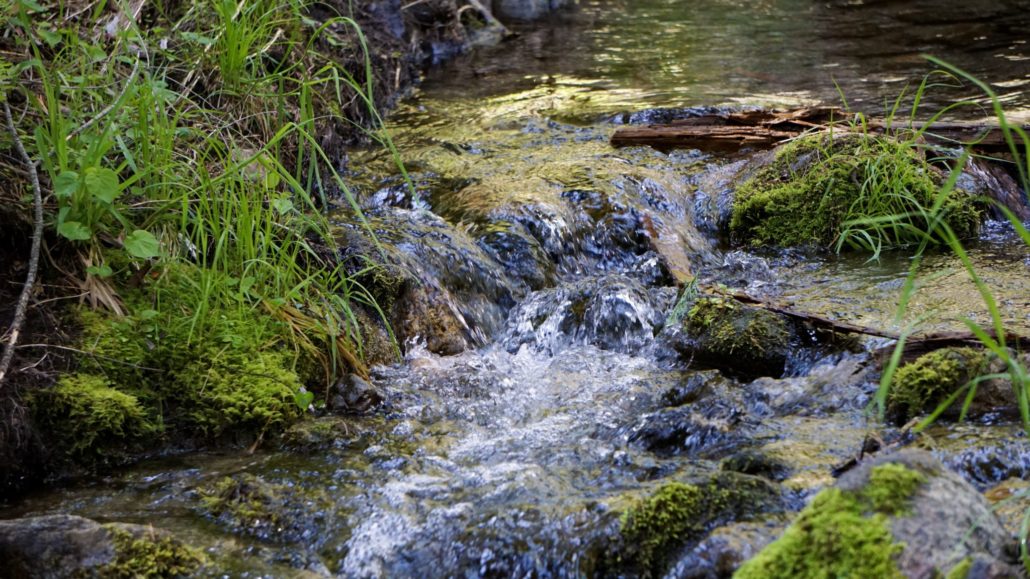 Starting from the Redwood Saddle parking area, follow the signed Redwood Canyon Trail as it winds downhill through towering sequoias looming over a thick understory of mountain dogwoods. After 0.3 mile, the trail reaches a junction with the Hart Tree Trail leading left and the Redwood Canyon Trail leading right. An information sign at the junction describes the canyon’s brief logging past. After perusing, turn left to descend to the banks of Barton Creek (an easy rock-hop crossing) before beginning a long, mostly gradual climb through sequoia forest to Hart Meadow. Along the way, keep your eyes peeled for the limited evidence of past attempts at logging. A few large stumps and one cabin built into a scorched fallen sequoia are all that remain from the thankfully aborted attempts to capitalize on sequoia timber. 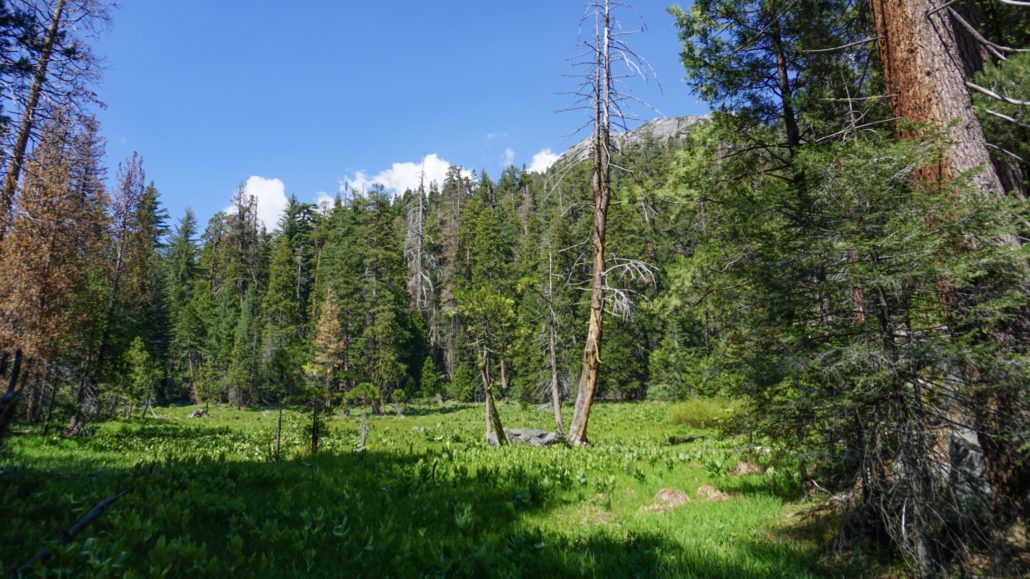 Just before Hart Meadow, look for a rocky outcrop (1.8 miles) that allows you to step out from the dense forest canopy to survey the view down Redwood Canyon and toward Redwood Mountain. At 2 miles (and the high point of the route), the trail sidles up along marshy Hart Meadow. Buena Vista Creek, which tumbles down from the rugged south face of Buena Vista Peak some 1,200′ above, feeds this meadow before emptying its contents in Redwood Creek below. Beyond the meadow, the trail dips down and then promptly crosses over a densely wooded ridge before commencing the long descent down to Redwood Creek. 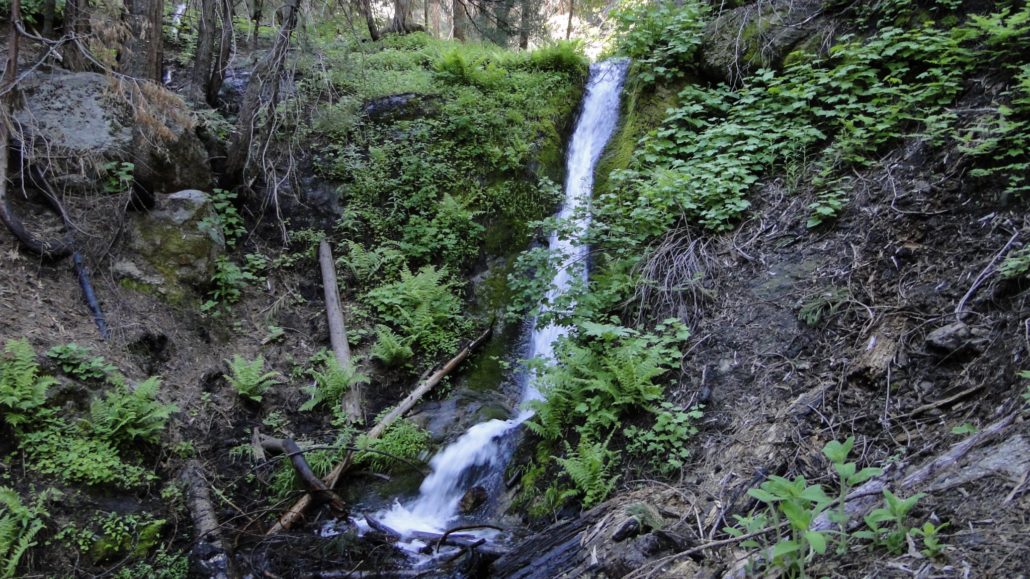 Before reaching the main fork of Redwood Creek, a handful of other highlights await. The trail crosses over the East Fork of Redwood Creek at 3.1 miles. Here the creek spills ten feet into a verdant grotto, creating a small but picturesque waterfall. Note that this seasonal creek may run dry by late summer or early fall. 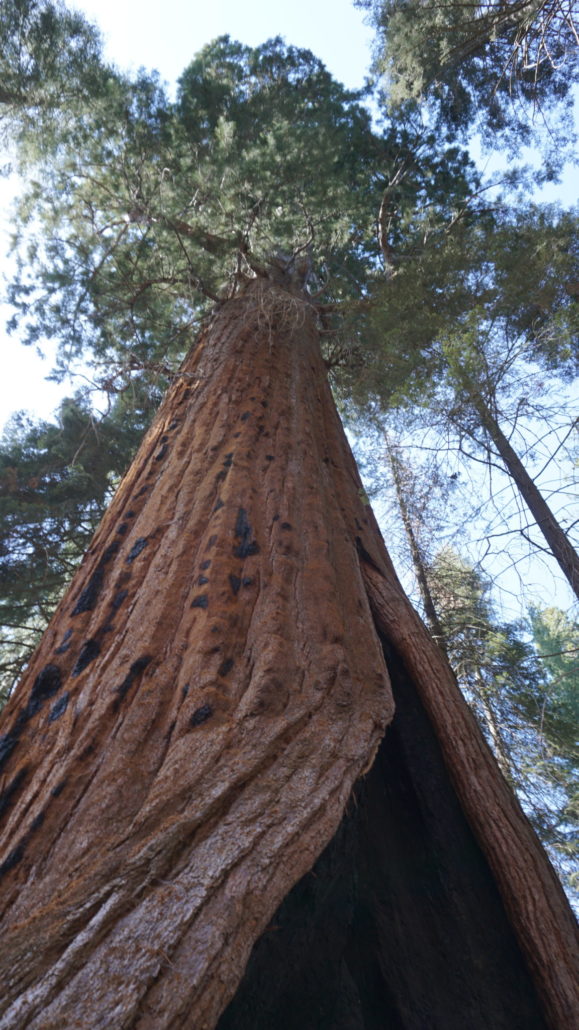 About 0.1 mile beyond East Fork Redwood Creek, a looping spur trail branches off on the right for a short, quick climb up to the Hart Tree. Note the massive burn scar on the upslope side of the tree; many sequoias feature burn scars on their upslope sides due to logs tumbling downhill and coming to rest at the base of the tree. When a fire rolls through, the log smolders for an extended period, leaving a significant scar. Nearly all old sequoias have some kind of burn scar, but after a period of time the bark will regrow over the scar, eventually hiding it from view. 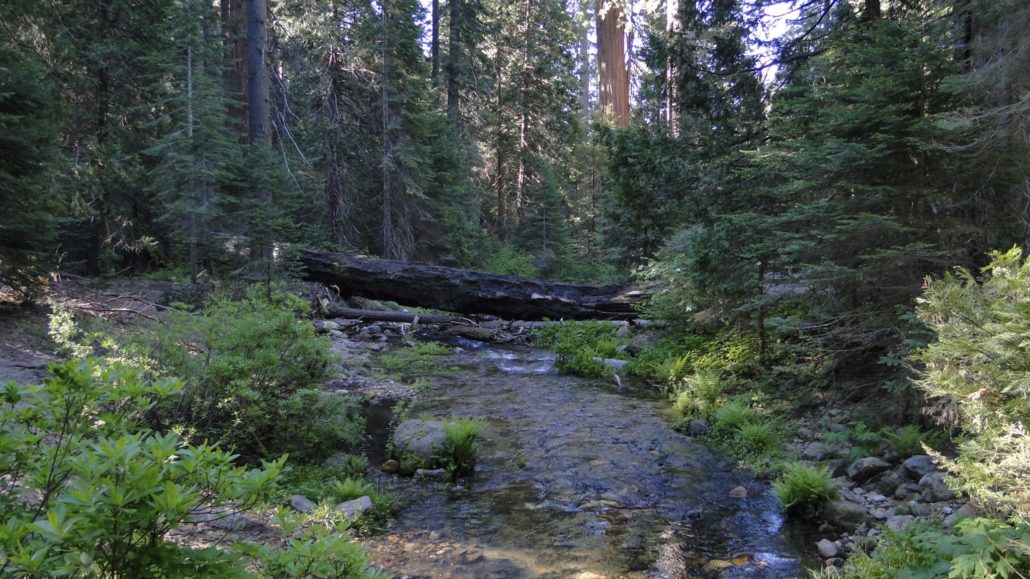 After the short detour to the Hart Tree, the descent quickens as the trail plunges through dense forest, passing the shattered remains of the Fallen Goliath at 4.8 miles. Just before reaching the banks of Redwood Creek and the pair of logs that allow for an easy crossing, scan the area for the handful of campsites. If you are backpacking, these are the only places in which you are allowed to camp within the canyon. If you are day-hiking, this area with the gentle music of Redwood Creek and the deep shade cast by sequoias will make a fine resting spot. Bear in mind that the rest of the trail will run uphill on a moderate ascent along the banks of Redwood Creek before returning to Redwood Saddle. 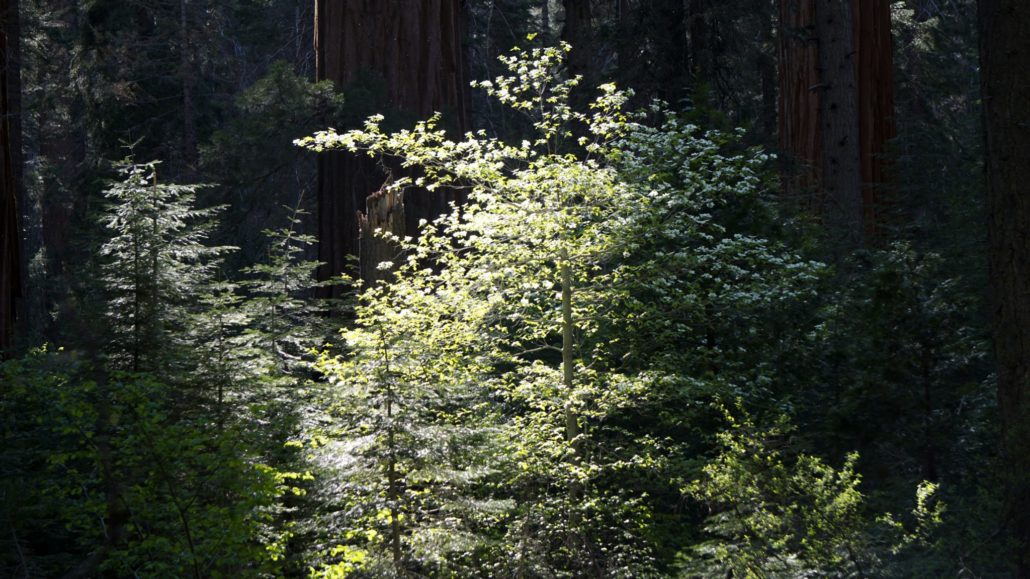 After crossing the creek, turn right onto the Redwood Canyon Trail and continue beyond the junction with the Sugarbowl Trail (5.4 miles). You will gain a relatively gentle 700′ over the next 2 miles to the saddle. As you do so, enjoy the beautiful corridors of mountain dogwood that forms the lush understory beneath the towering sequoias. The dogwoods put forth showy white blossoms by the hundreds during late spring, creating an ethereal and ephemeral scene almost straight from a fantasy book. During October, the leaves of the dogwood turn red, creating a vivid fall color show uncommon to the western Sierra. 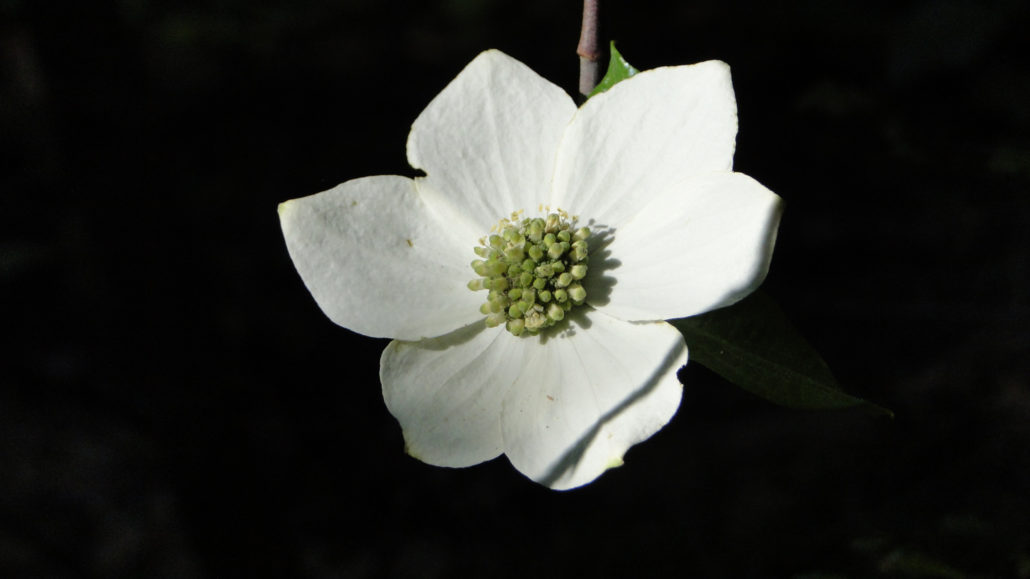 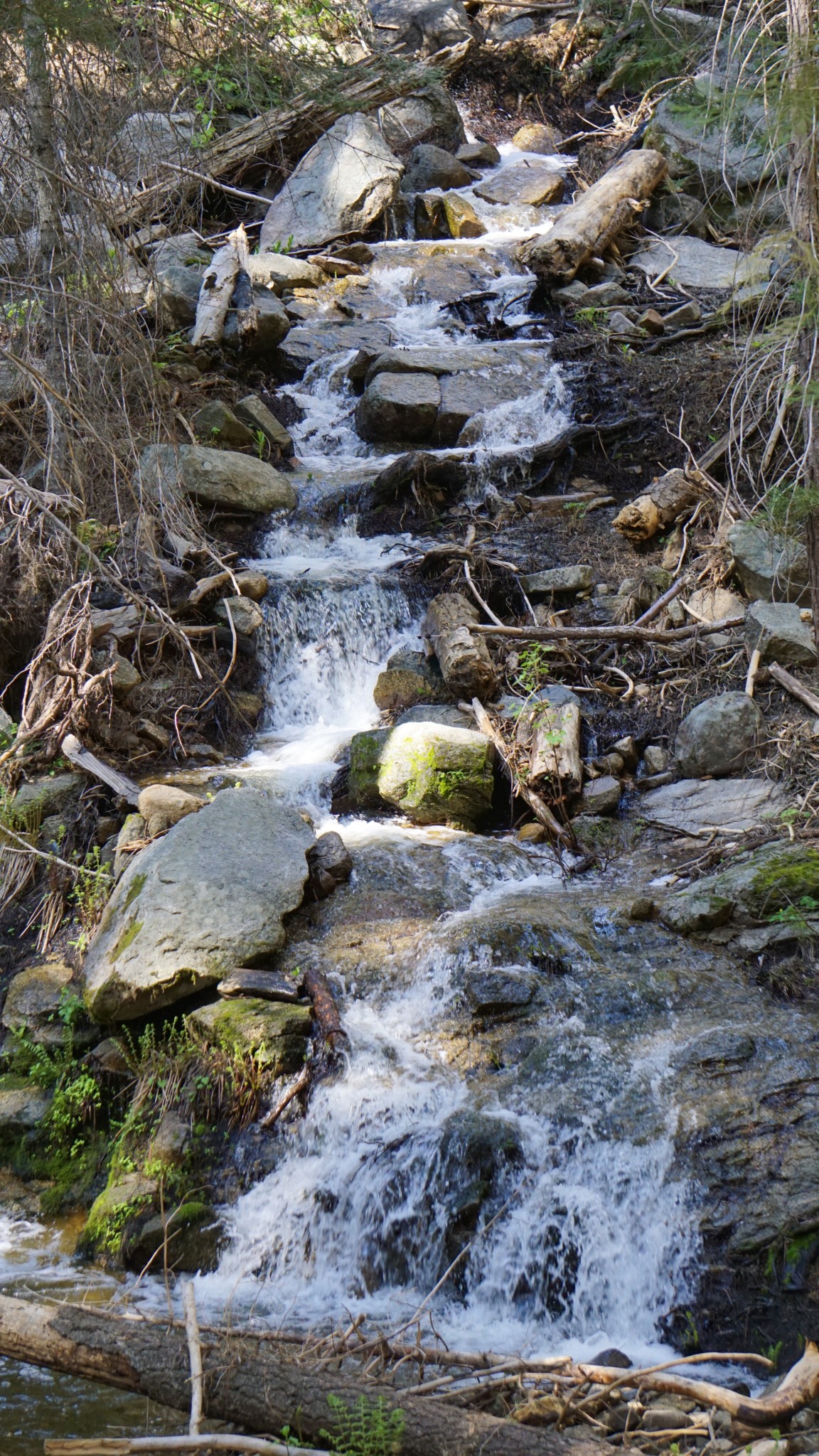 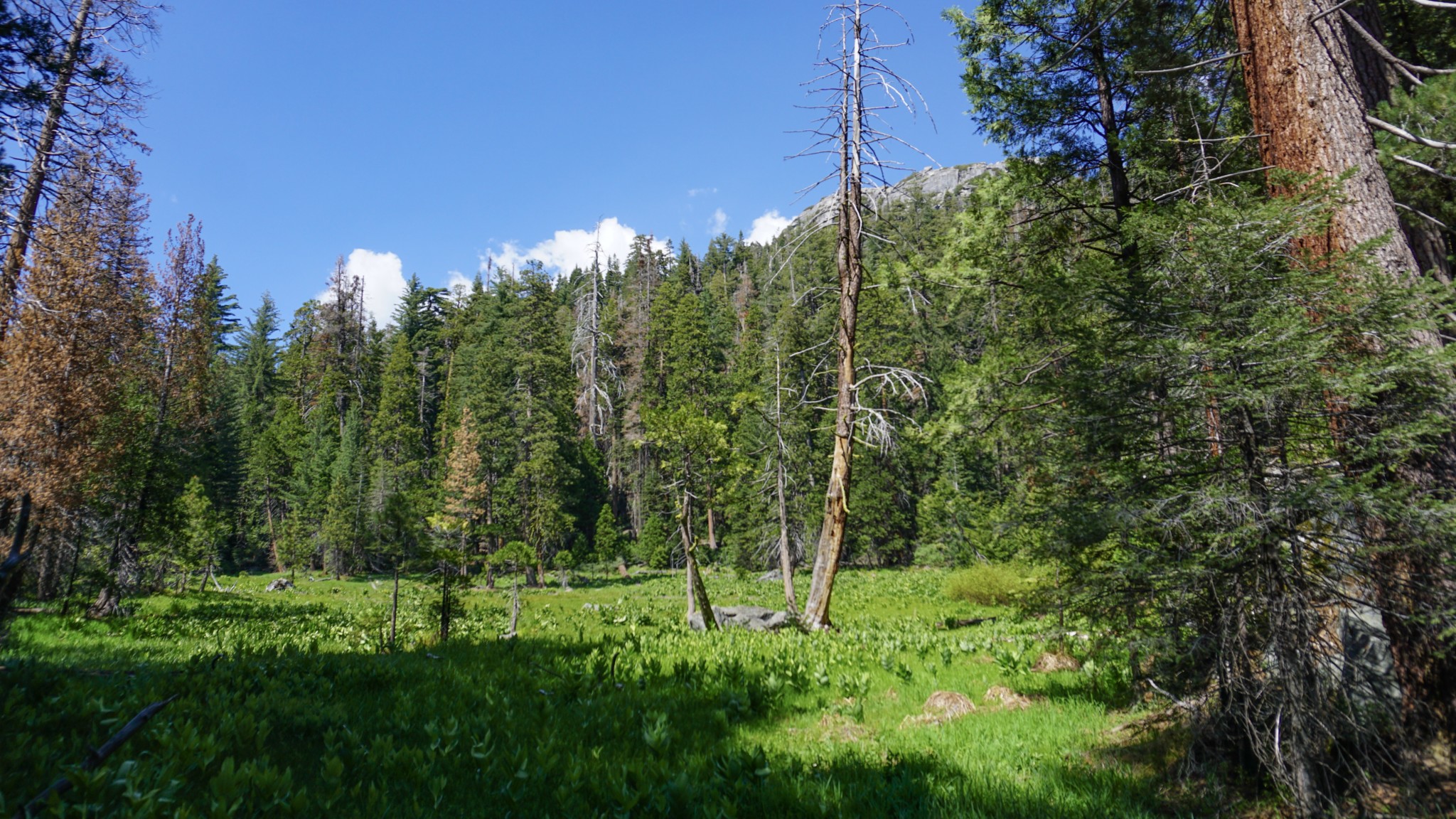 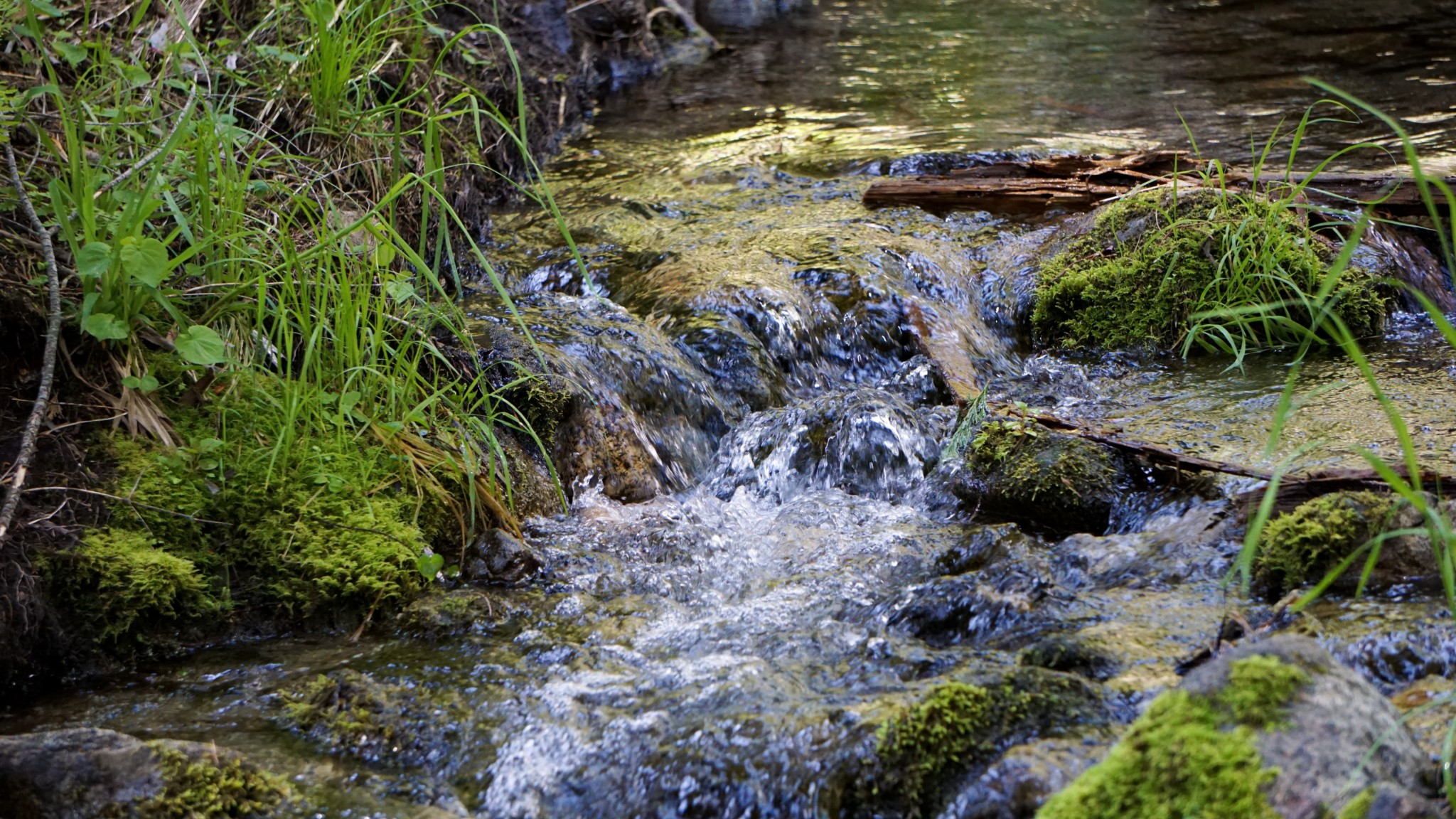 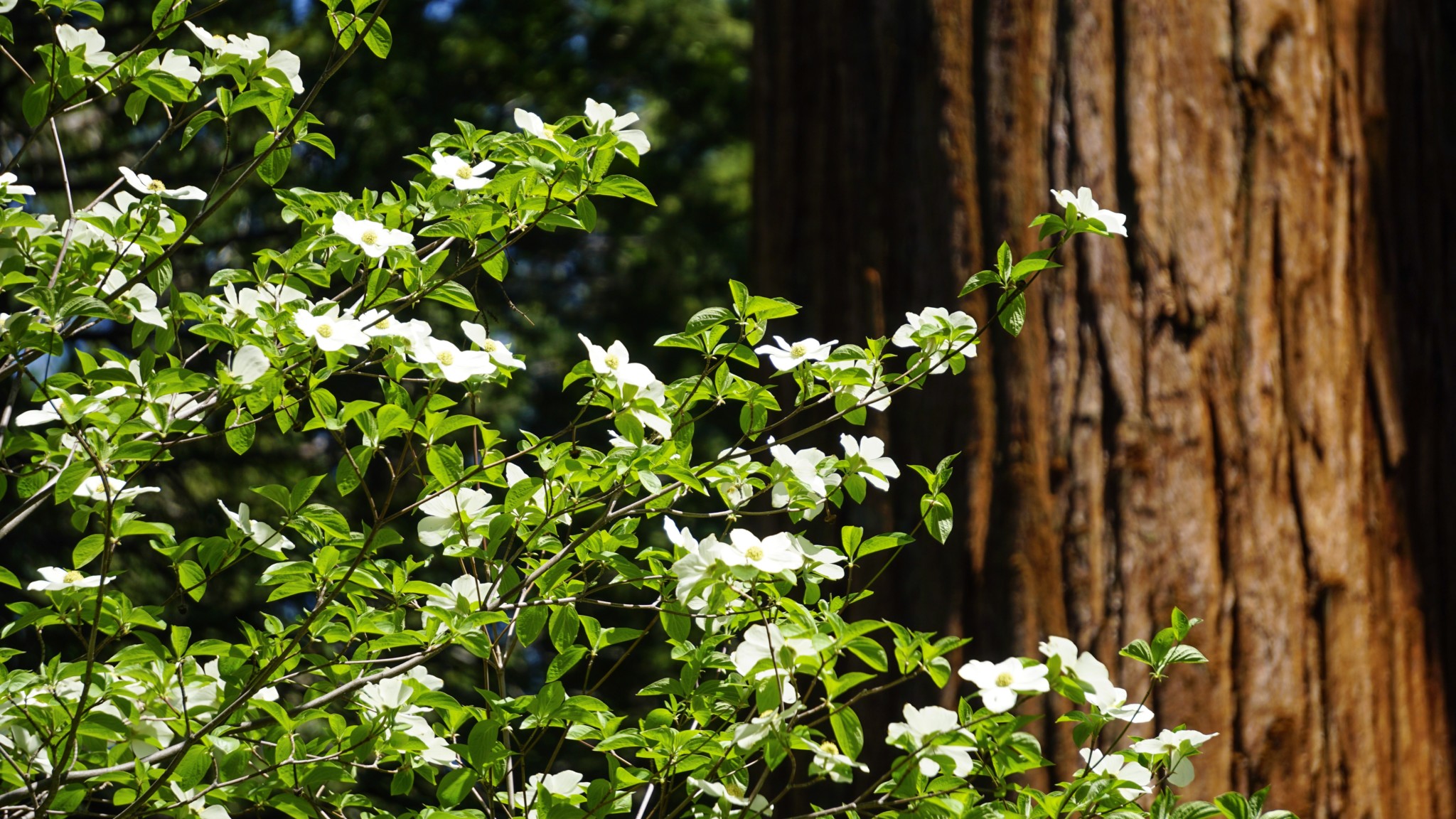 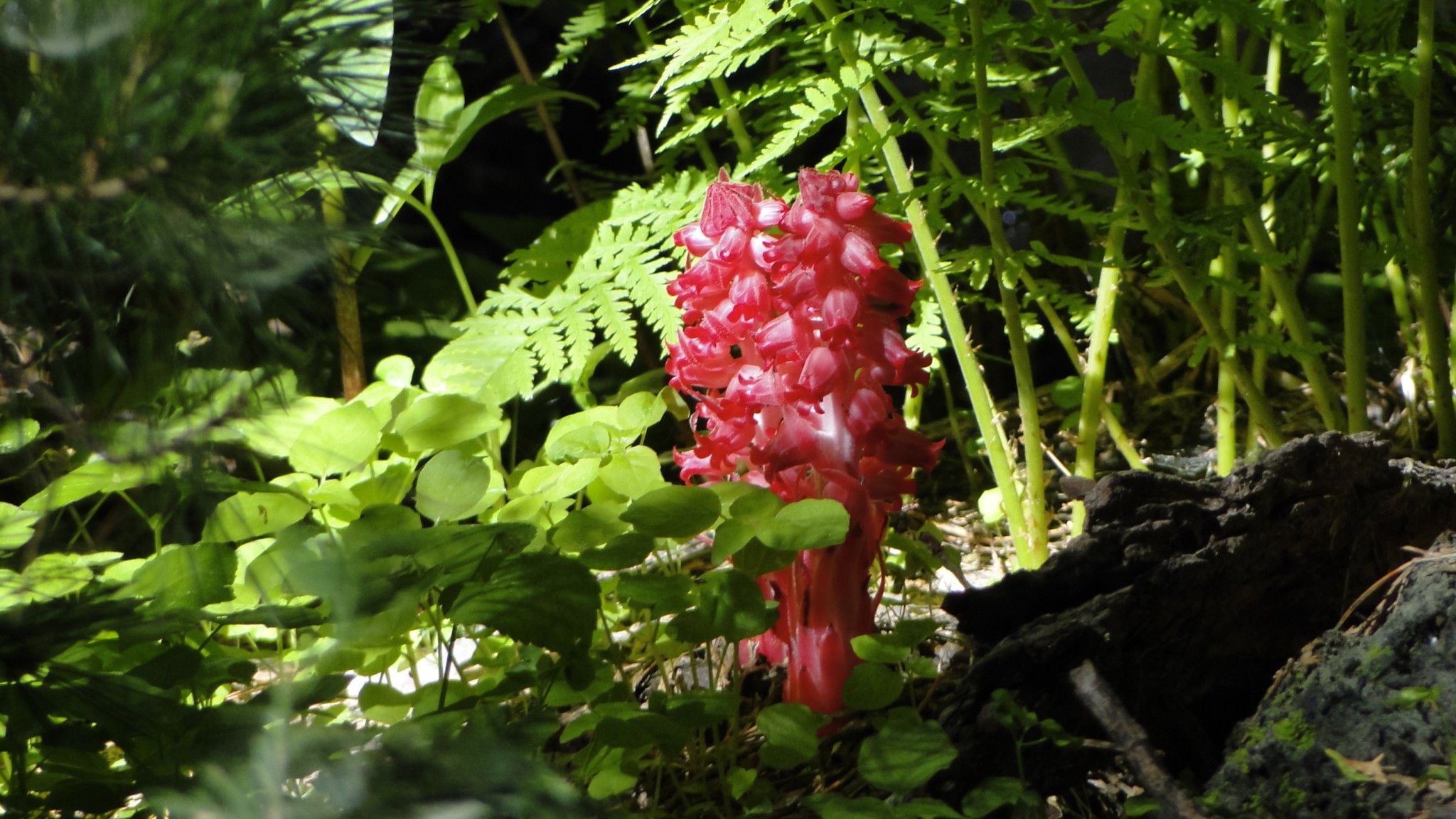 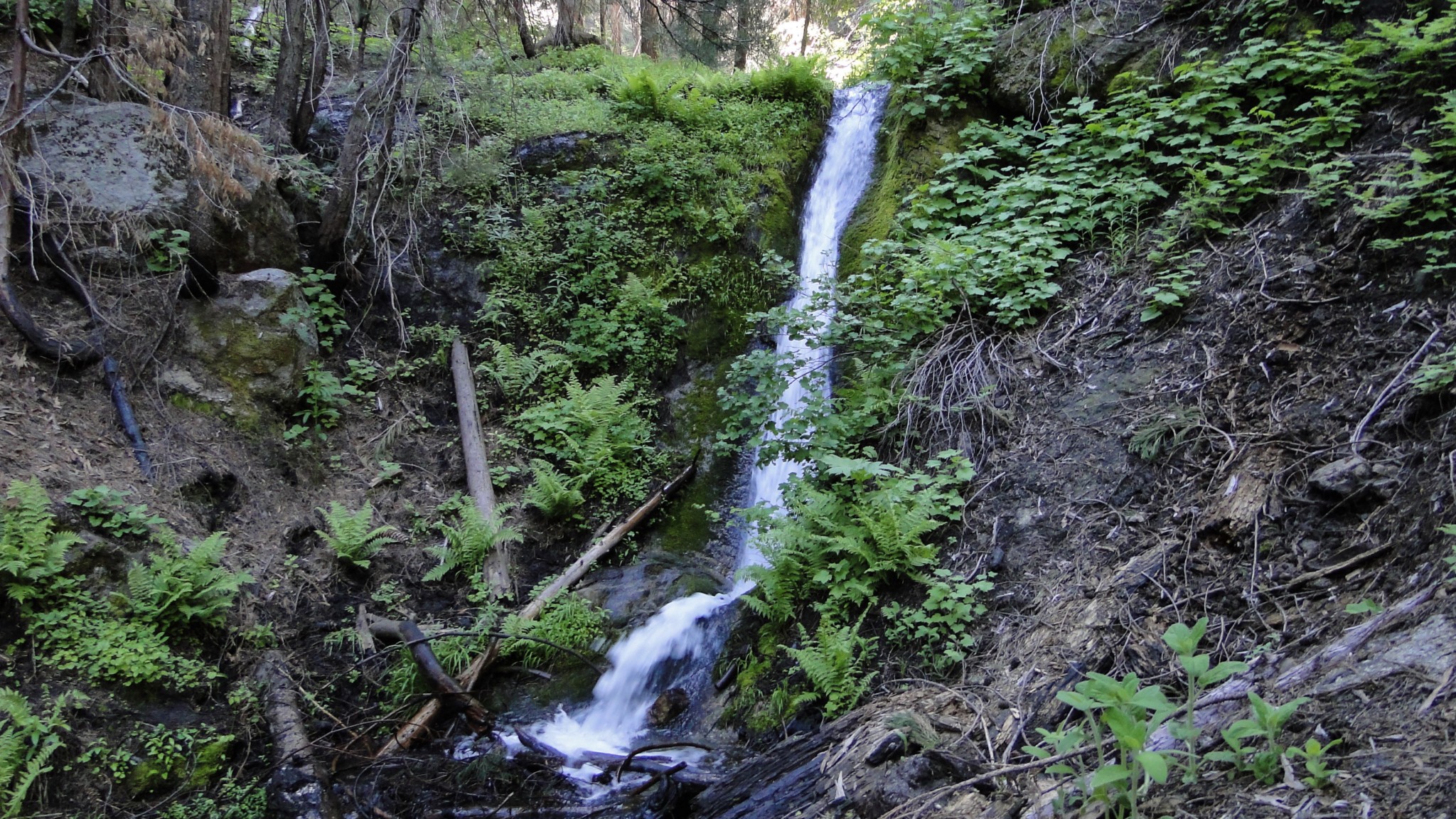 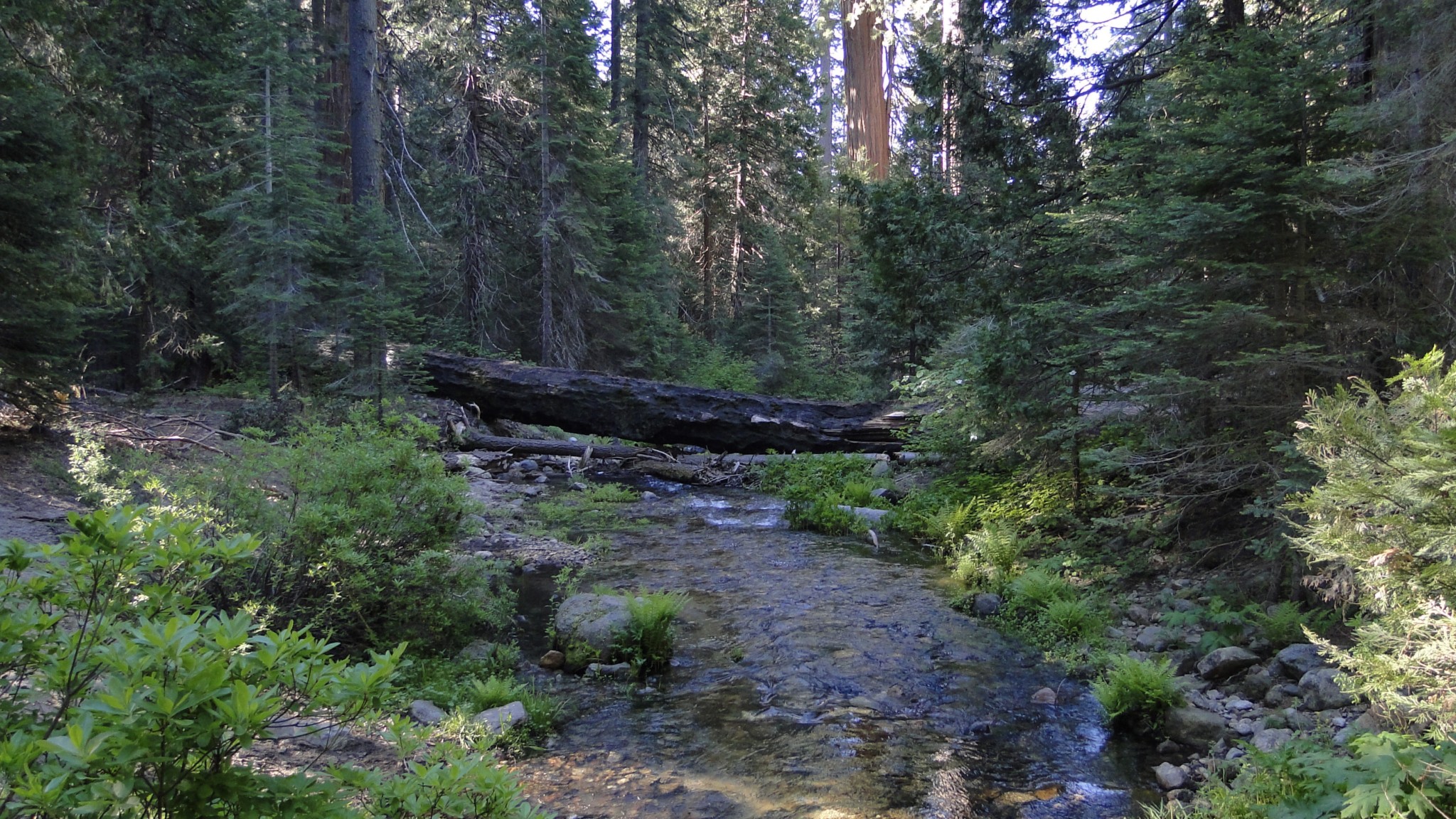 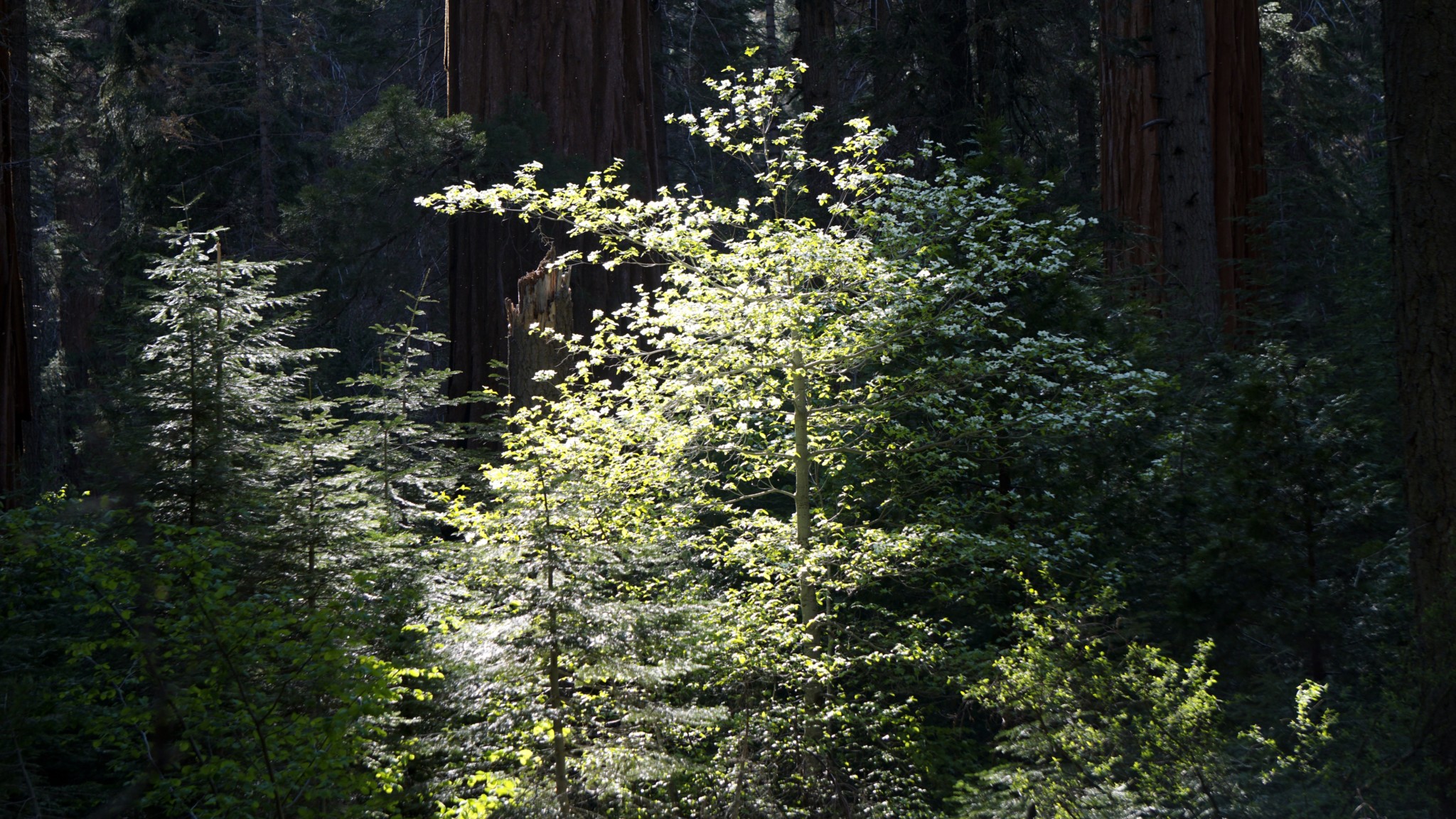 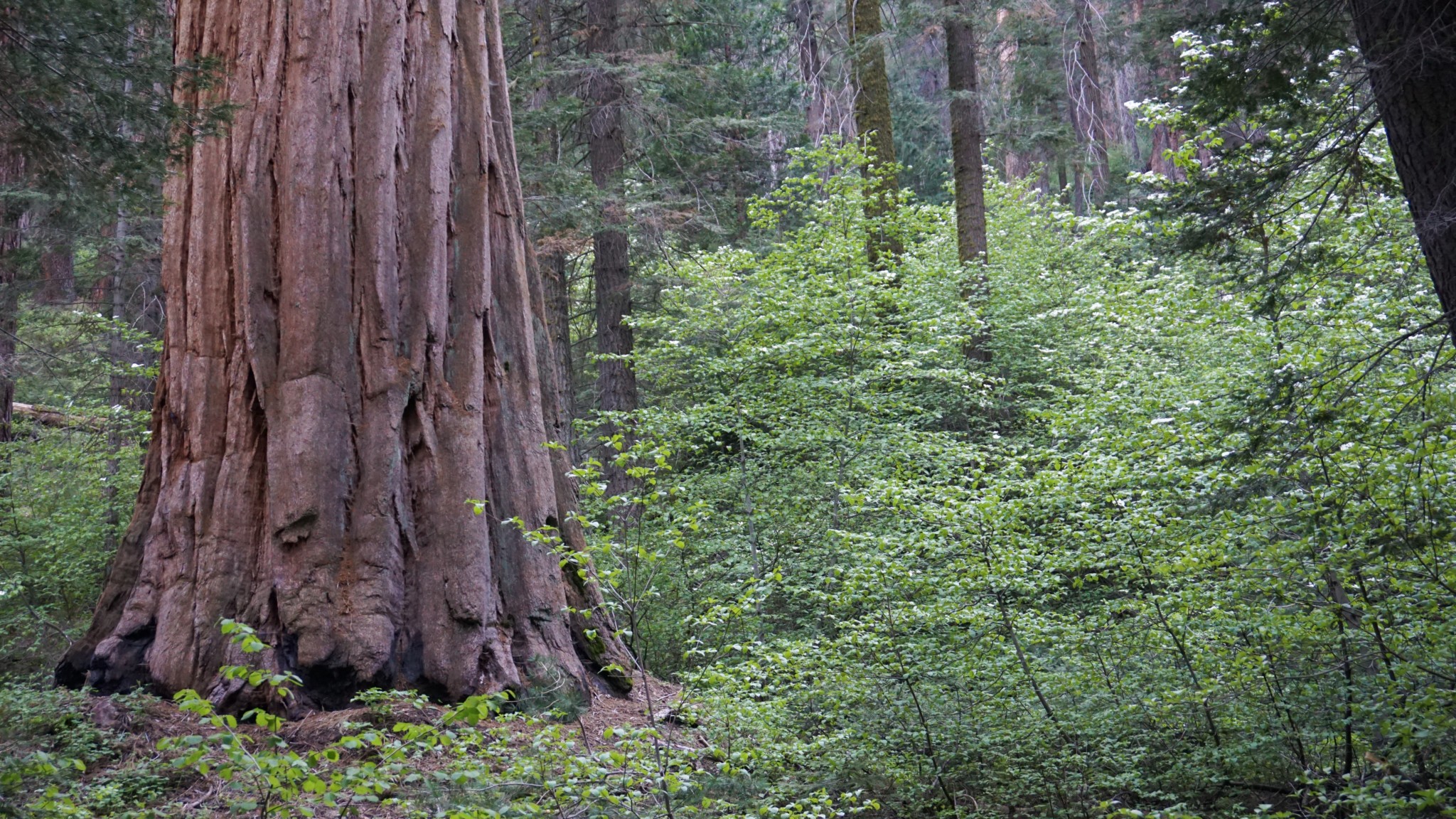 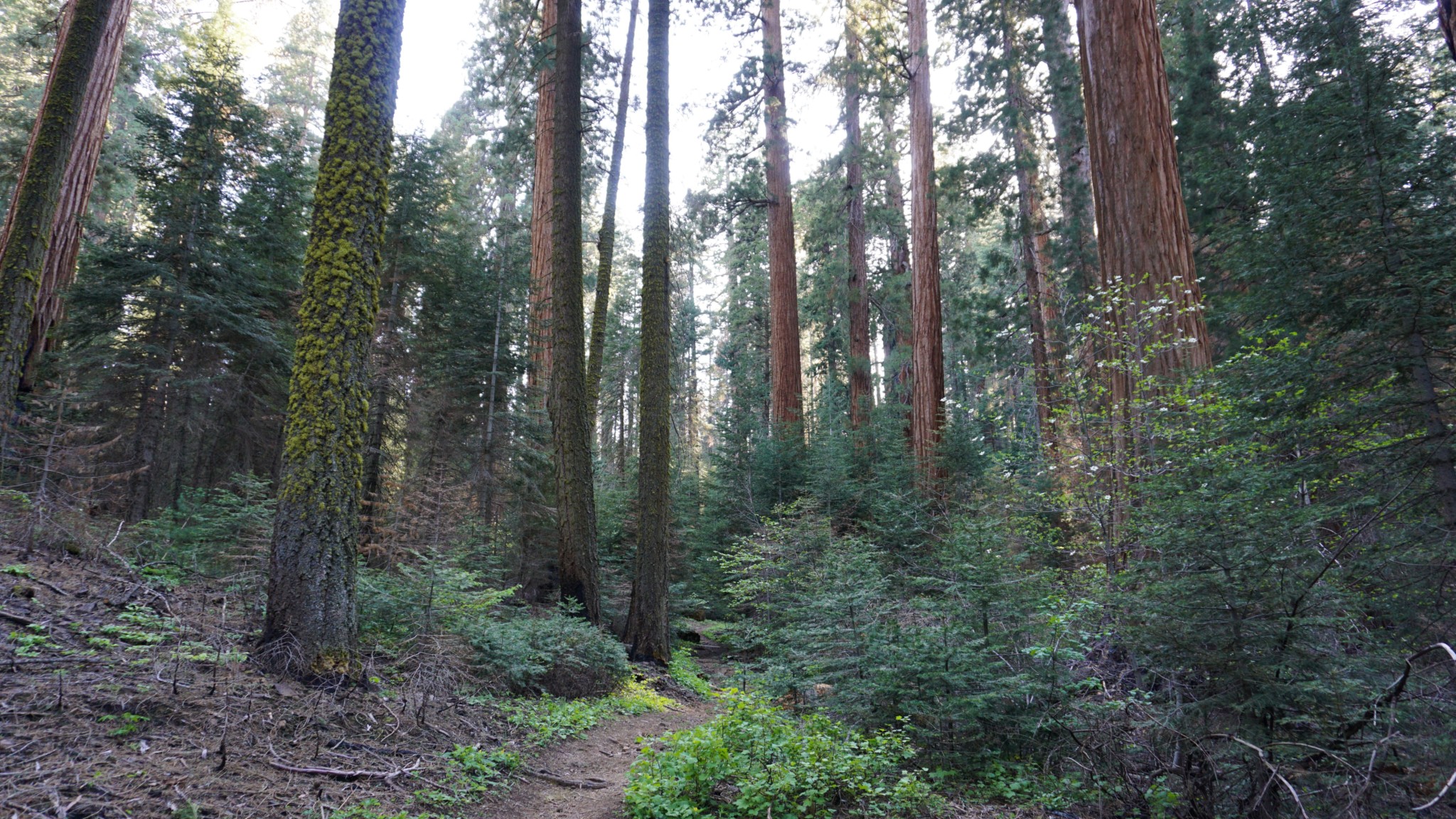 The trail is well-traveled and easy to follow. Bear in mind that the last 2 miles of the trail climb out of Redwood Canyon, so save some energy for the end.

The nearest established campgrounds are Upper and Lower Stony Creek. However, you can also camp in Redwood Canyon near the junction with the Hart Tree and Redwood Canyon Trails - provided you obtain a permit first.

From Fresno, take Highway 180 east toward Kings Canyon National Park. After passing through the park entrance, take a right on Generals Highway and travel south toward Giant Forest. The dirt road to Redwood Meadow will be on the right side of the highway, directly opposite of the road to Big Meadows. Turn right and follow the dirt road 2 miles down to the Redwood Canyon parking lot, which will be off to the left of the main road.