UPDATE 1/1/2018: I hiked this route on 12/30/2017, at which time I encountered a number of hiker-created route-finding gimmicks that have no place in the desert. Over the last two years, hundreds of cairns, pink ribbons marking the route, and even arrows drawn onto rocks have popped up. All of this is in direct violation of Leave No Trace principles. On that day we removed all of the cairns and most of the ribbons (some where deeply embedded into cholla). We also reported the arrows to the park, and hopefully somebody will be out there soon. I must emphasize that you SHOULD NOT HIKE THIS ROUTE if you are not comfortable with desert navigation. Do not attempt to leave cairns or ribbons to mark their way. If you have to rely on that kind of navigation, this hike is definitely not for you.

Hikers, history buffs, and desert enthusiasts across San Diego County and SoCal revere a historic engineering curiosity that stands in splendid remoteness in a rugged corner of Anza-Borrego Desert State Park. The crown jewel of the Impossible Railroad, the Goat Canyon Trestle, spans a deep, rugged tributary canyon draining into the Carrizo Gorge north of the town of Jacumba. For many hikers, a pilgrimage to the trestle is both an essential rite of passage and a marvelous sight to behold. 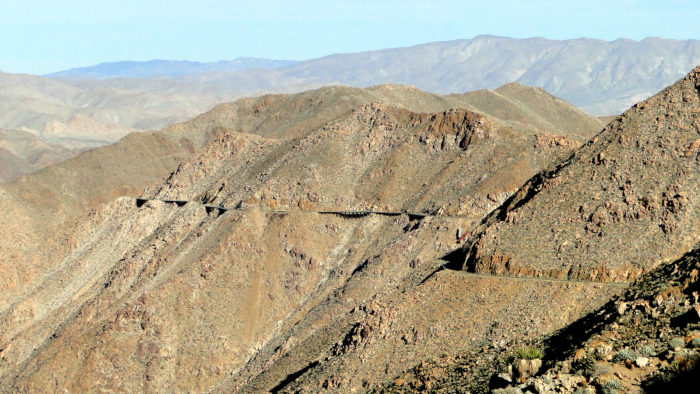 The Railroad threading the east wall of Carrizo Gorge

So why did they put all of this effort into building a massive railroad trestle in the middle of nowhere? Back at the turn of the 20th century, businessmen sought a way to connect the then fledgling metropolis of San Diego with El Centro. Of course, to get between those two points, railroad lines would have to pass over the rugged natural barrier of the Jacumba Mountains. Rather than thread the railway line through this maze of granitic boulders, railroad engineers instead set their sites on the Carrizo Gorge. 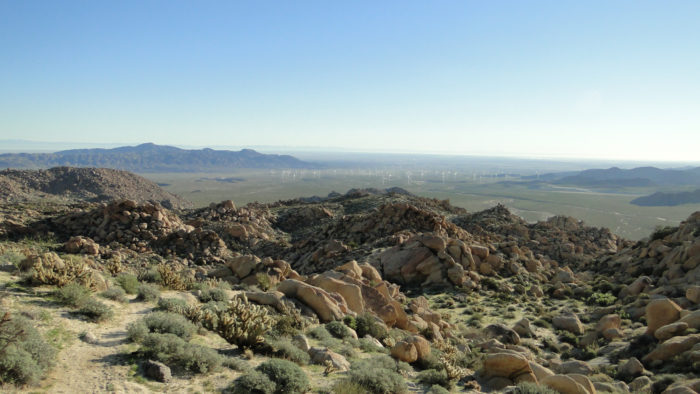 The geography of the gorge and subsequent construction was no picnic either. It took engineers 12 years to construct the railroad line through the gorge. The numerous tributary ravines necessitated the construction of 17 tunnels and 14 major wooden trestles. Of those trestles, the Goat Canyon trestle is not only the largest in the canyon, but also the entire planet. 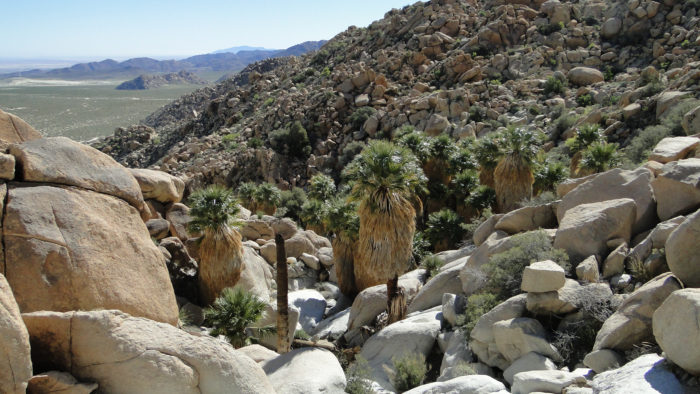 Many hikers attempt to reach the trestle by way of the simplest, easiest means possible. These hikers follow the train tracks from the Indian Hill area for a long, but ultimately gentle traverse along the upper slopes of the Carrizo Gorge. While this route spares hikers the challenges of desert navigation and difficult terrain, it is also illegal. The train tracks are property of San Diego’s Metropolitan Transit System (yes, the company that runs the trolleys), and they do not want people walking on the tracks. The tracks themselves, and the terrain on either side of the tracks, are leased out to the Imperial Gorge Railway, which is currently in the process of attempting to reopen the line. If all goes well, trains will one day follow the sinuous thread of the Impossible Railroad as it snakes its way through the Jacumba Mountains. 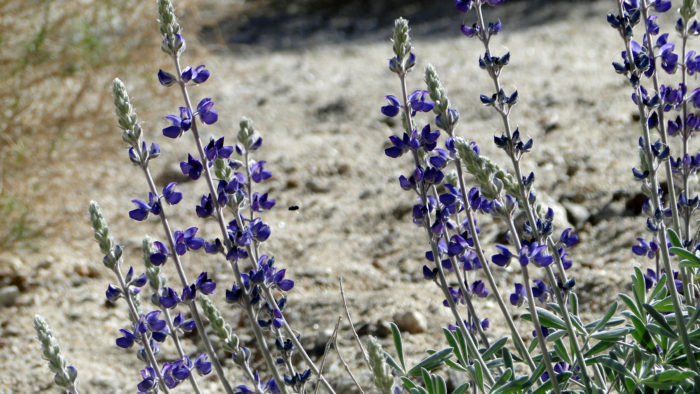 Fortunately, you don’t have to break a bunch of laws and endure a long, tedious approach on railroad tracks to get a good look at the trestle. The route I spell out here is shorter and more rugged, but infinitely more interesting. Perhaps more importantly, it is also legal. While I know many people are less concerned about the legality of where they put their feet, there are a lot of reasons why you should respect private property laws. If the moral reasons and long term consequences of not following laws don’t sway you, then perhaps the possibility of receiving a fine for your actions will. The railroad police do have a history of not ticketing, but that may change as officials seek to reopen the line. And of course, if enough people start breaking the laws in this region, they may close off access entirely for everyone.

So please, don’t hike on the train tracks, OK?

As with all hikes in the desert, we encourage you to avoid this hike between May and September due to extreme temperatures. Hikers should also be warned that some of the terrain on this hike is very difficult and suitable only for experienced desert trekkers. Hikers should come prepared with adequate water (at least a gallon), sturdy shoes, abundant sun protection, and the confidence that you can handle all kinds of situations in a dry, forbidding environment. 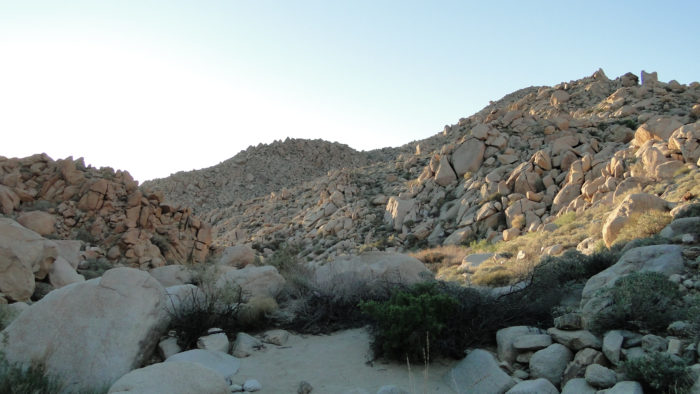 From the Mortero Palms parking area, drop down into the wash and make your way toward a boulder-choked canyon on the left. The canyon draining from the right may look like the main canyon, but it is not. You’ll soon find an informal path beaten down by frequent use that climbs above the boulder-choked wash. You can stay above the wash to make your way to Mortero Palms, but before you do so, look for a faint trail dropping into the wash just before the palms. This path will lead you to a large, flat stone pock-marked with morteros. The Kumeyaay people that inhabited this area prior to the arrival of Europeans ground seeds, nuts, and acorns into meal in these depressions. Not only do these morteros lend the name to the palm grove, but they also provide a glimpse into the past in this sensitive cultural area. 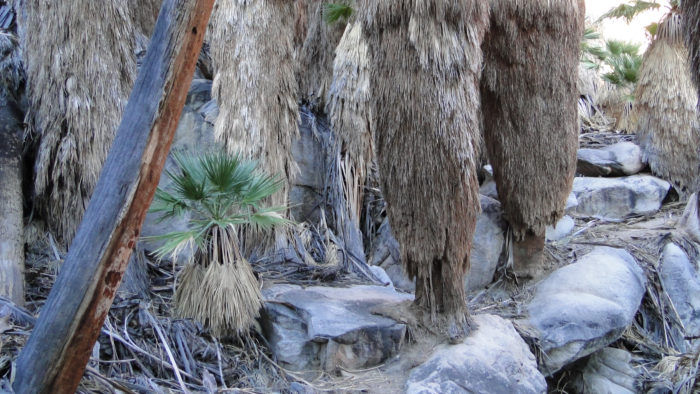 Once back on the path, continue through a maze of boulders into one of the densest palm groves in Anza-Borrego Desert State Park. Although not particularly large, the grove here is dense, cool, and shaded. Expect to have a hard time overcoming the grove’s inertia; it is irresistibly peaceful here. You’ll also have to reconcile yourself with the knowledge that the toughest part of the climb lies ahead. 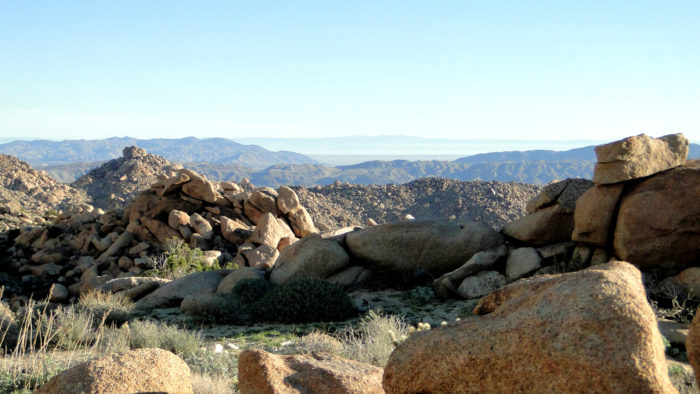 A formidable series of dry falls awaits hikers just beyond the palms. Accomplished boulder scramblers may enjoy scrambling straight up the granitic chutes, but more cautious hikers will wish to climb the bouldery slopes on either side. None of the routes over this obstacle are easy, but I found the rocks to the left of the falls relatively passable. 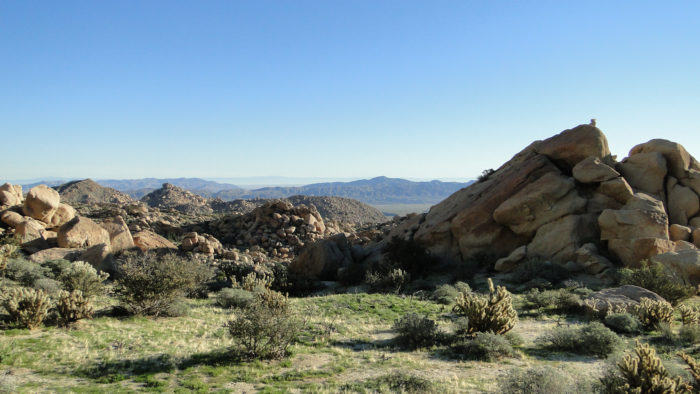 Once on the other side of the falls, you’ll follow the wash upstream into a small valley. The canyon continues up a steep, bouldery draw. Avoid this scramble by climbing the slope on the right. Finding the route will be easier thanks to the well-beaten trail that climbs the sandy slopes. As you climb, be sure to turn back frequently for views east and southeast across the Yuha Desert and toward the BLM’s Coyote Mountain Wilderness. 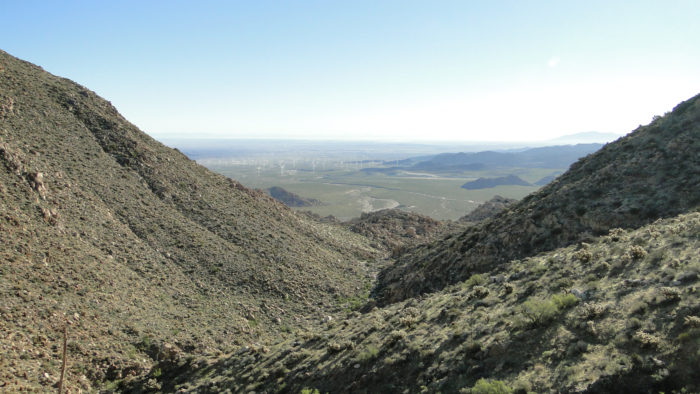 Circumvent the tricky bit of climbing, before dropping back into the wash. Follow the wash for another 250 yards. Up ahead, you’ll notice a distinct change in the color and composition of the rocks from beige granite to gray metamorphic rock. You’ll get a taste for the difference when the wash reaches a steeper ravine. Find the continuation of the trail as it climbs along the south side of the ravine. 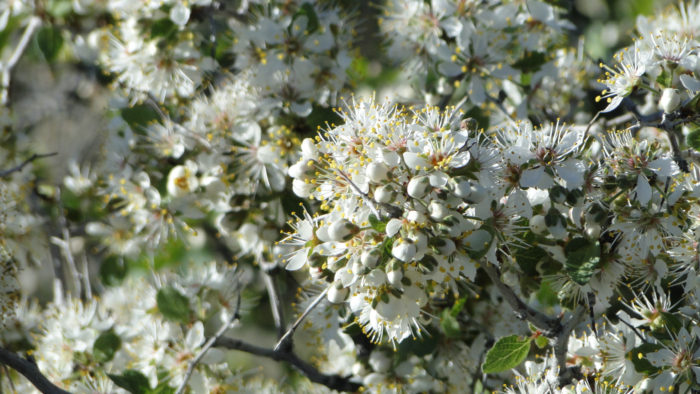 After .4 mile and much climbing, you will reach the top of a saddle with a view into a shallow valley. Continue to follow the trail as it winds through this valley to reach a second saddle that marks the watershed divide between Palm Canyon and Goat Canyon. From the saddle, you will look down into a broad, bowl-shaped valley studded with juniper and numerous spots for dry camping. The trail continues to thread its way through this valley toward a narrow outlet to the west. Continue in this direction to reach the steep confines of Goat Canyon. 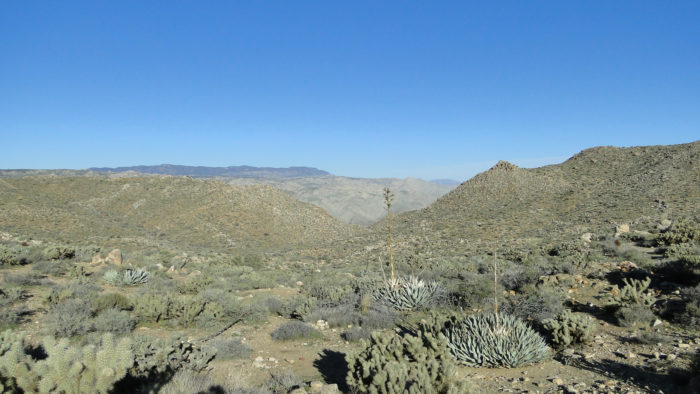 After the trail disintegrates into Goat Canyon’s wash, the going becomes much more challenging. You’ll drop a lot of elevation through the rugged canyon in a hurry, bearing in mind that you will have to make all of it back up on the return. After a painstaking boulder hop that circumvents a pair of dry falls, you will come to a vantage point at 2.75 miles, several hundred feet and about .25 mile above the trestle. A 50 foot dry fall below this spot makes further travel difficult, although determined and skilled hikers can continue on to the base of the trestle. Remember of course that the trestle is private property, and, tempting though it may be, walking on the trestle itself is forbidden. 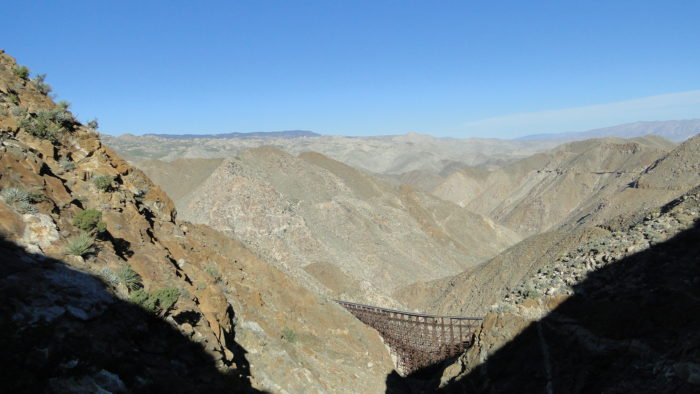 If you feel like you’ve had enough bouldering for the day, turn back and ascend the steep canyon back into the headwaters of Goat Canyon. Retrace your way along the path down Palm Canyon, carefully descend the dry falls, and stop for an extended pause in Mortero Palms. In the heat of the day at the tail end of the hike, you will find a rest in the grove much more relaxing without having a major hike ahead of you. 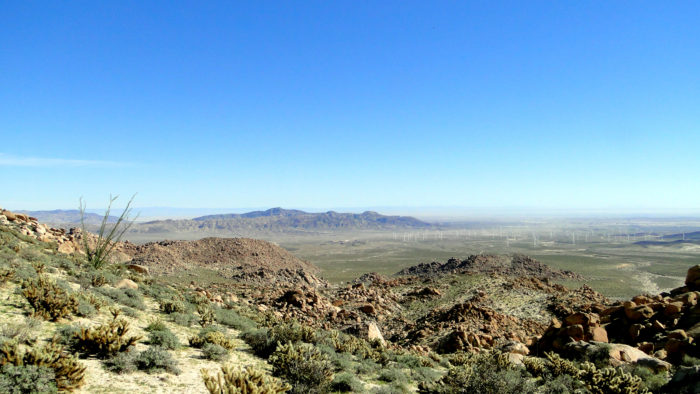 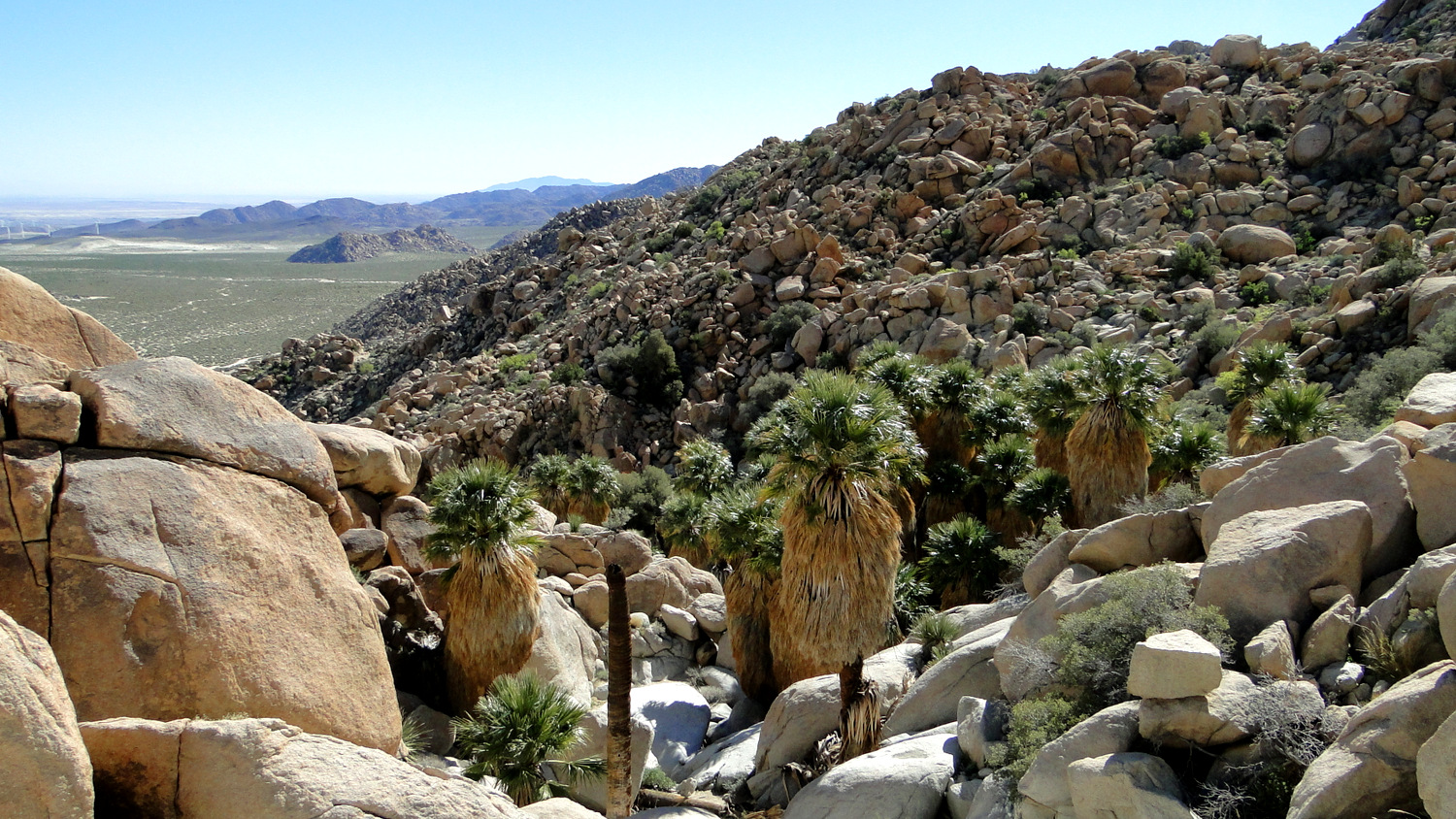 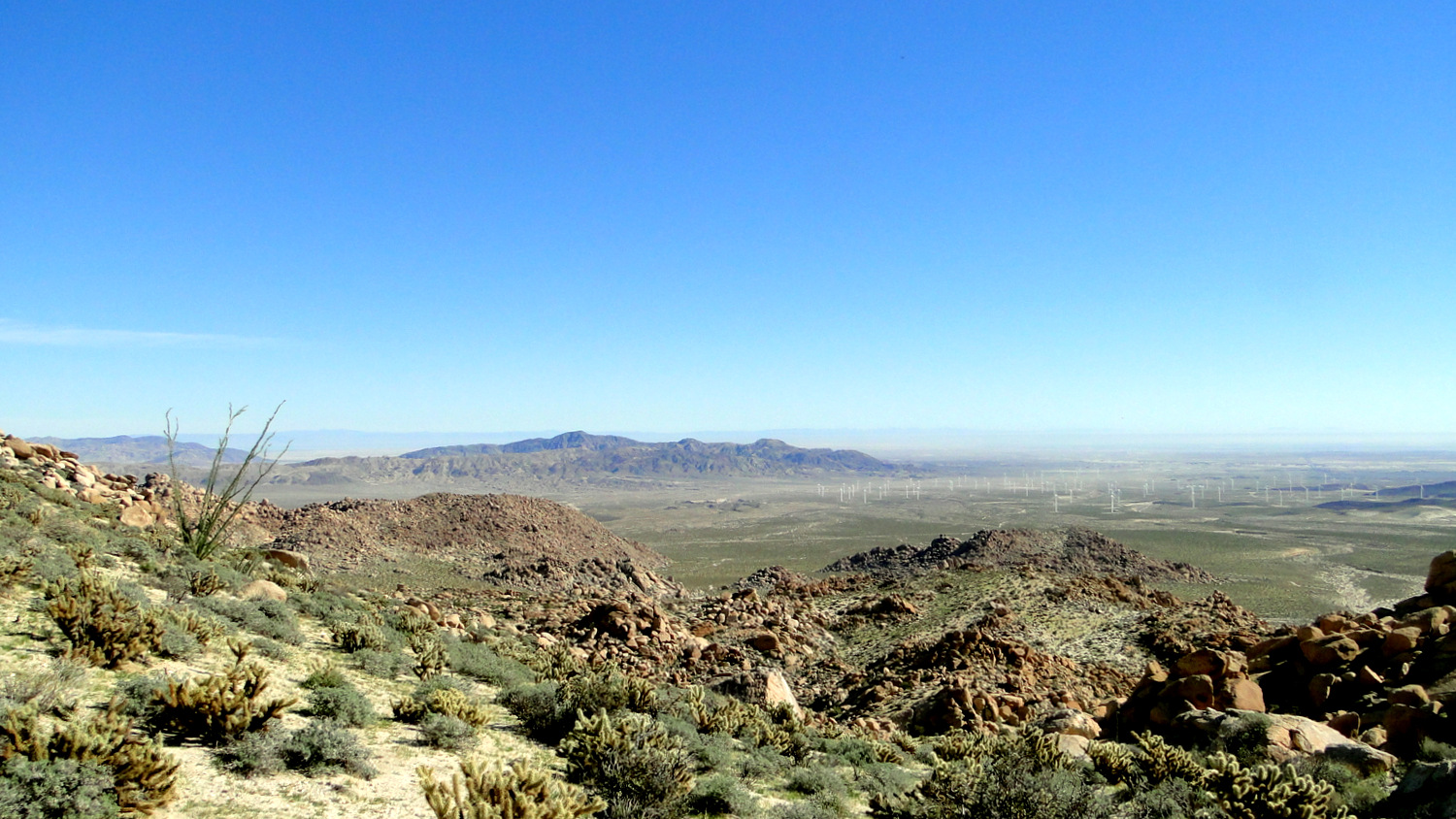 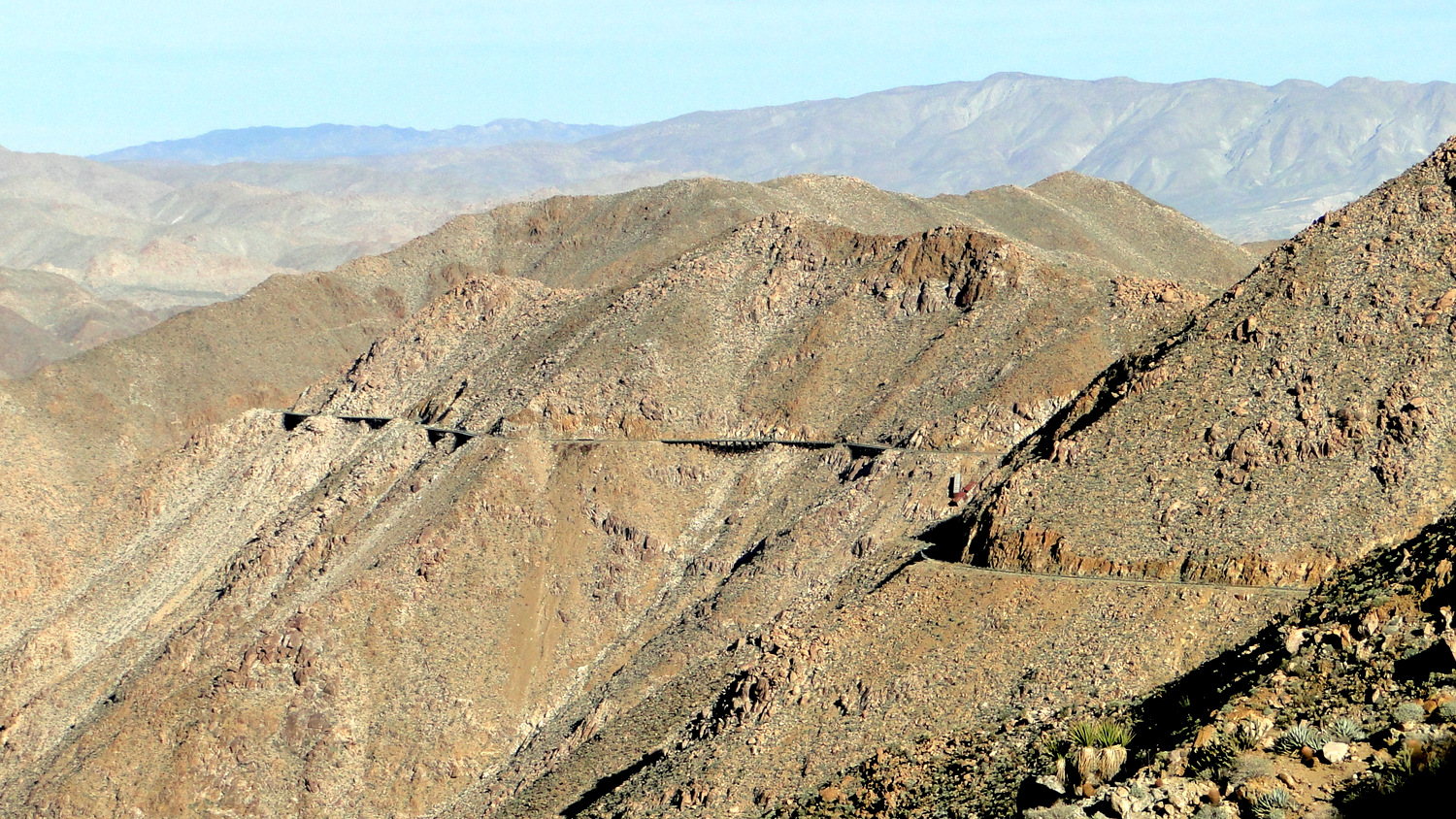 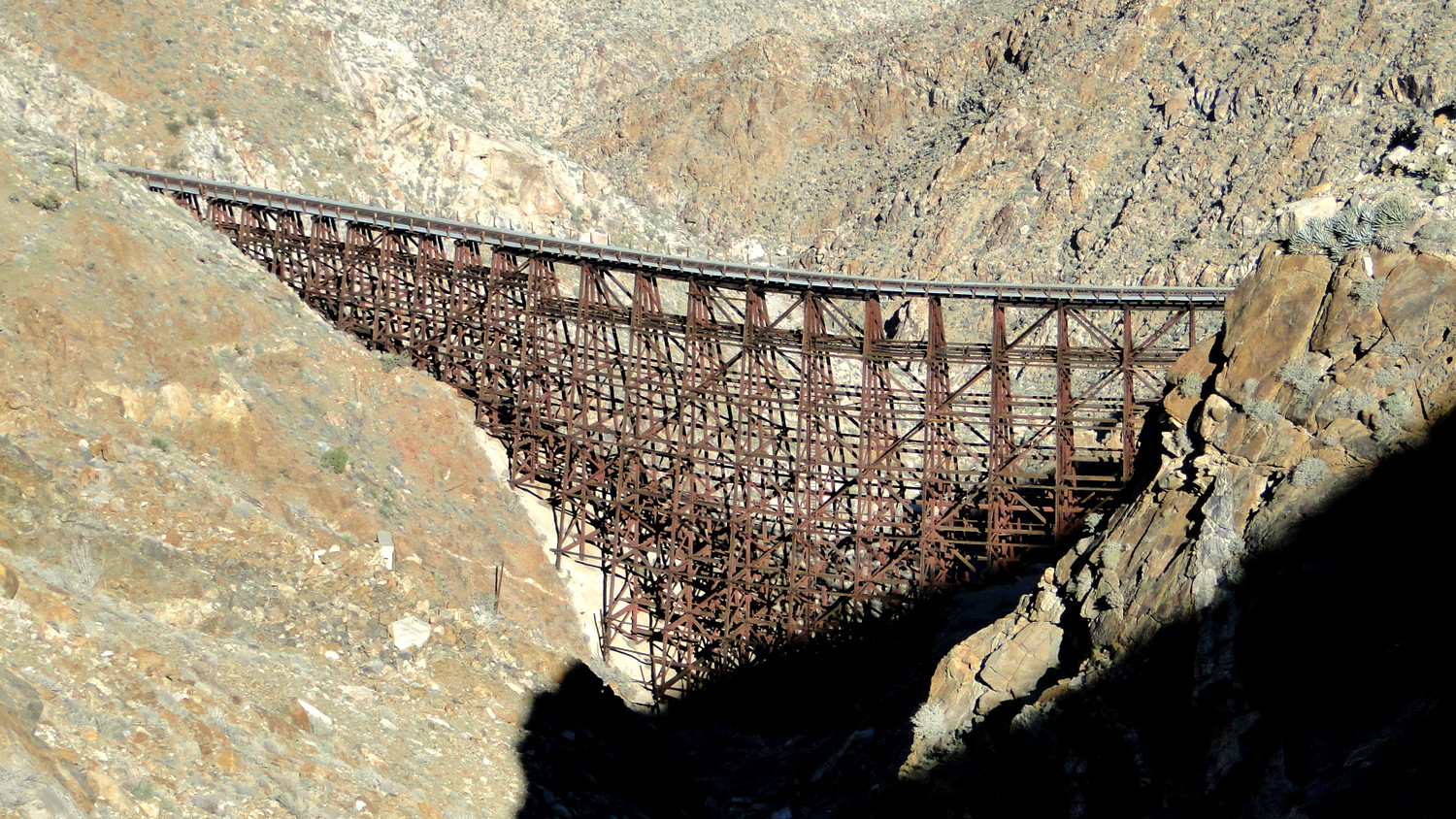 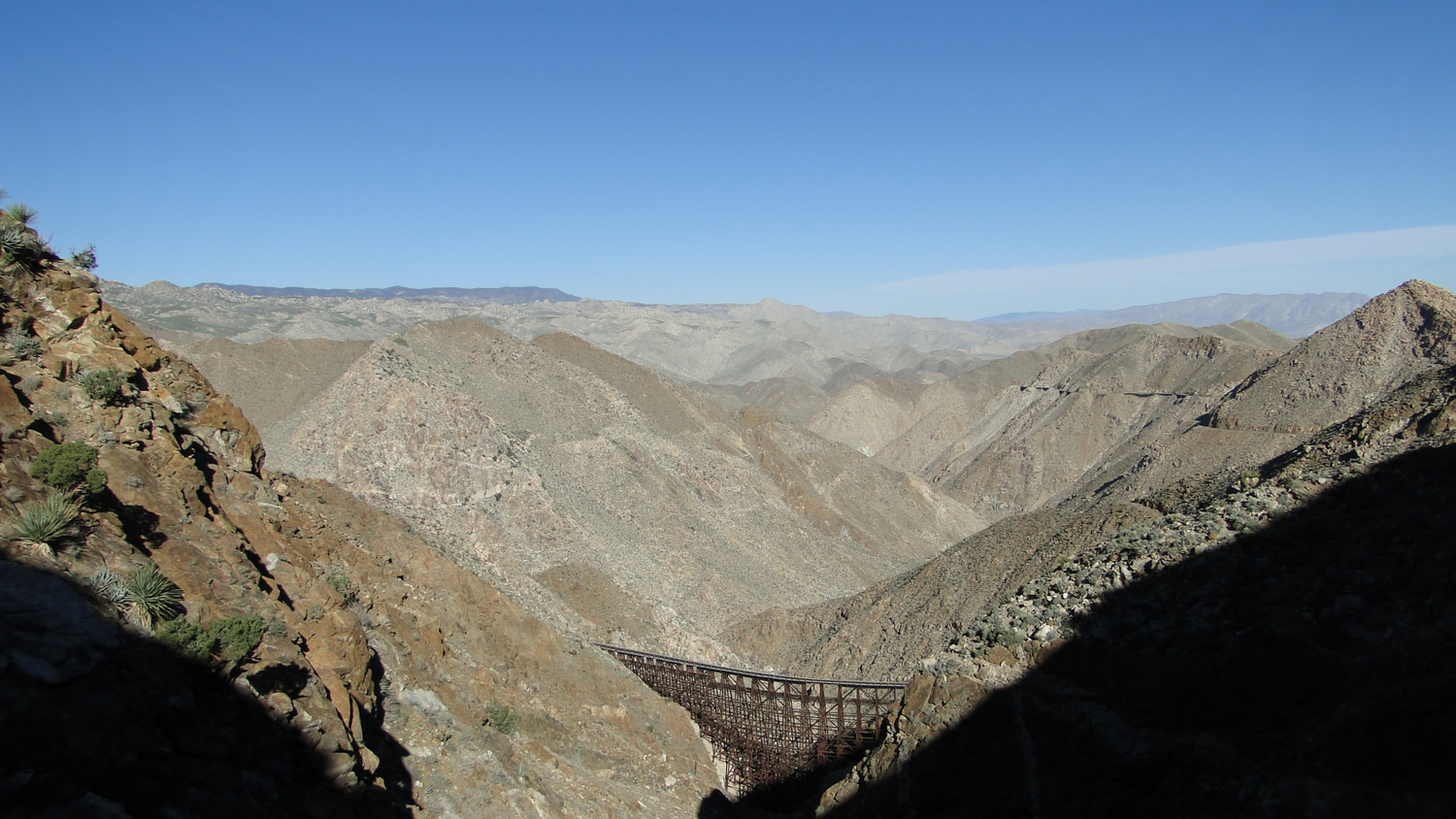 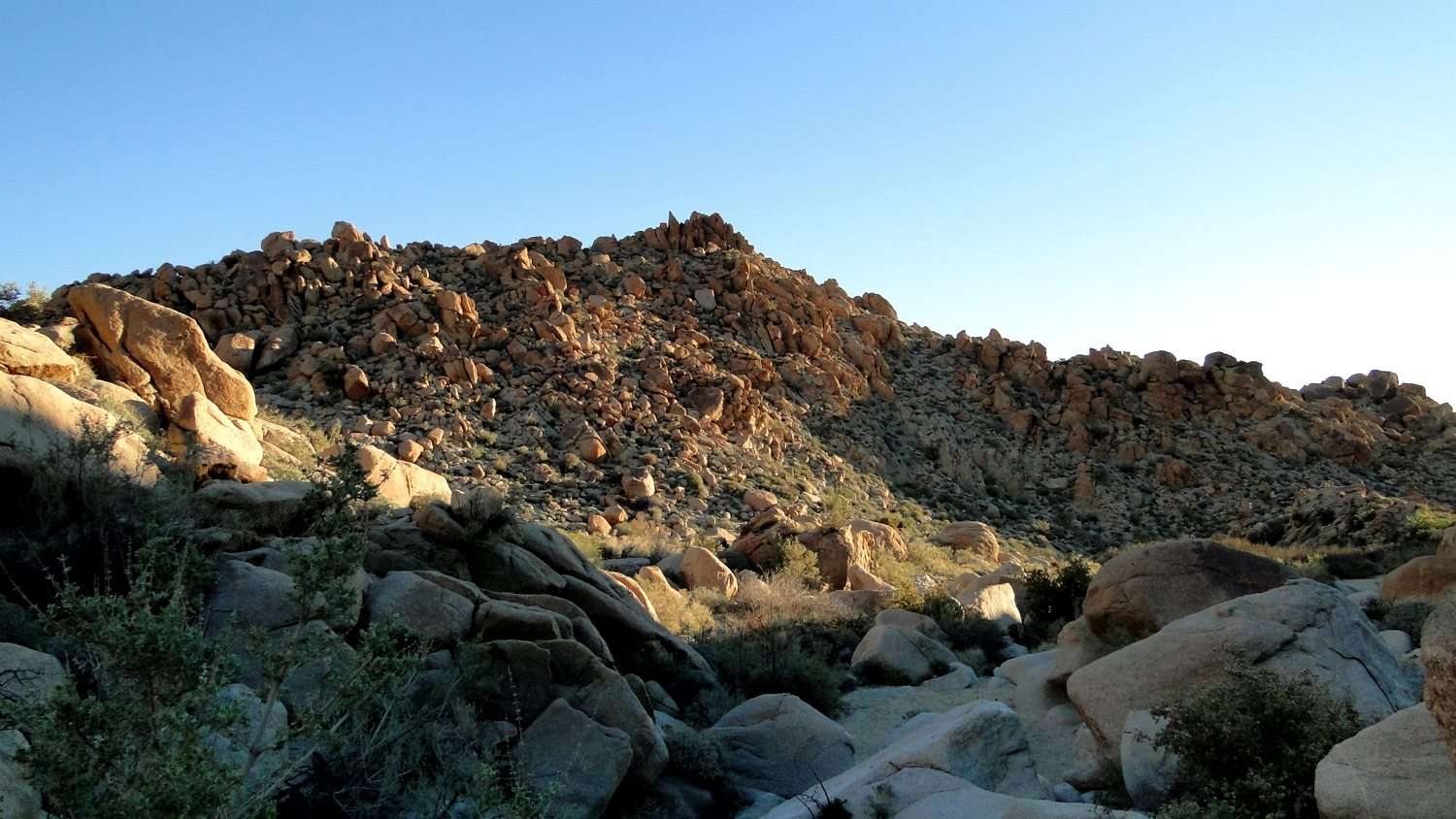 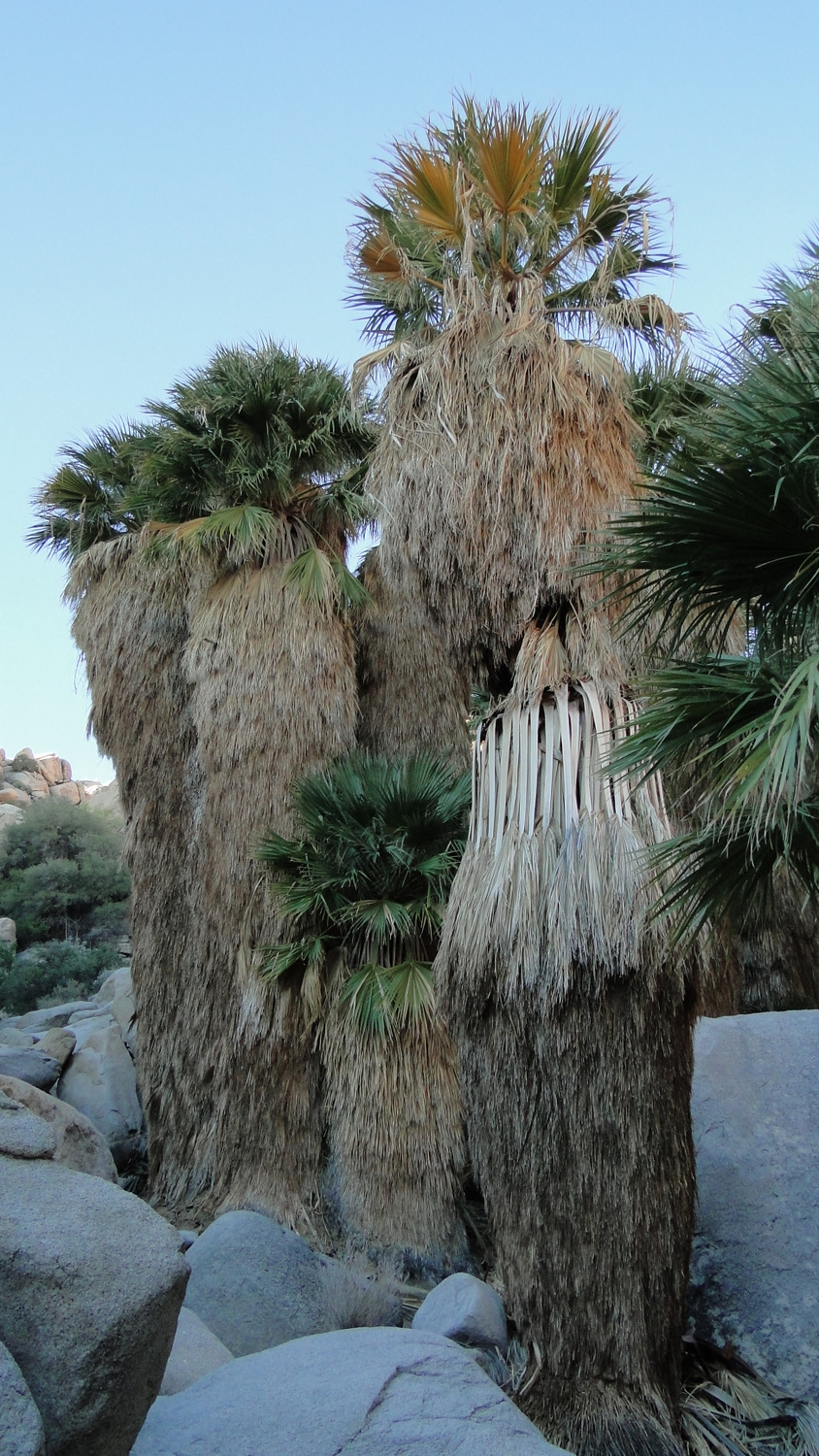 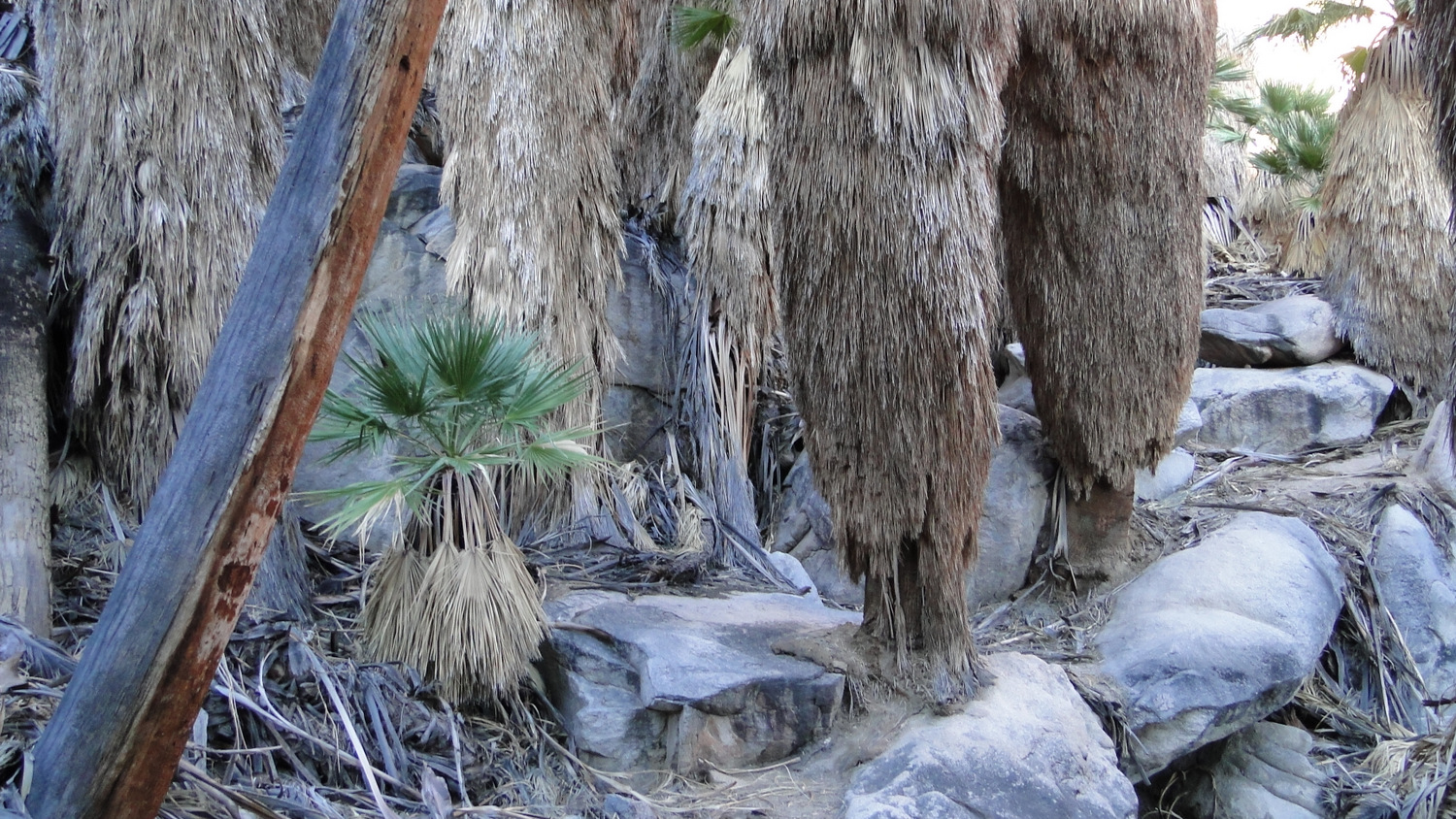 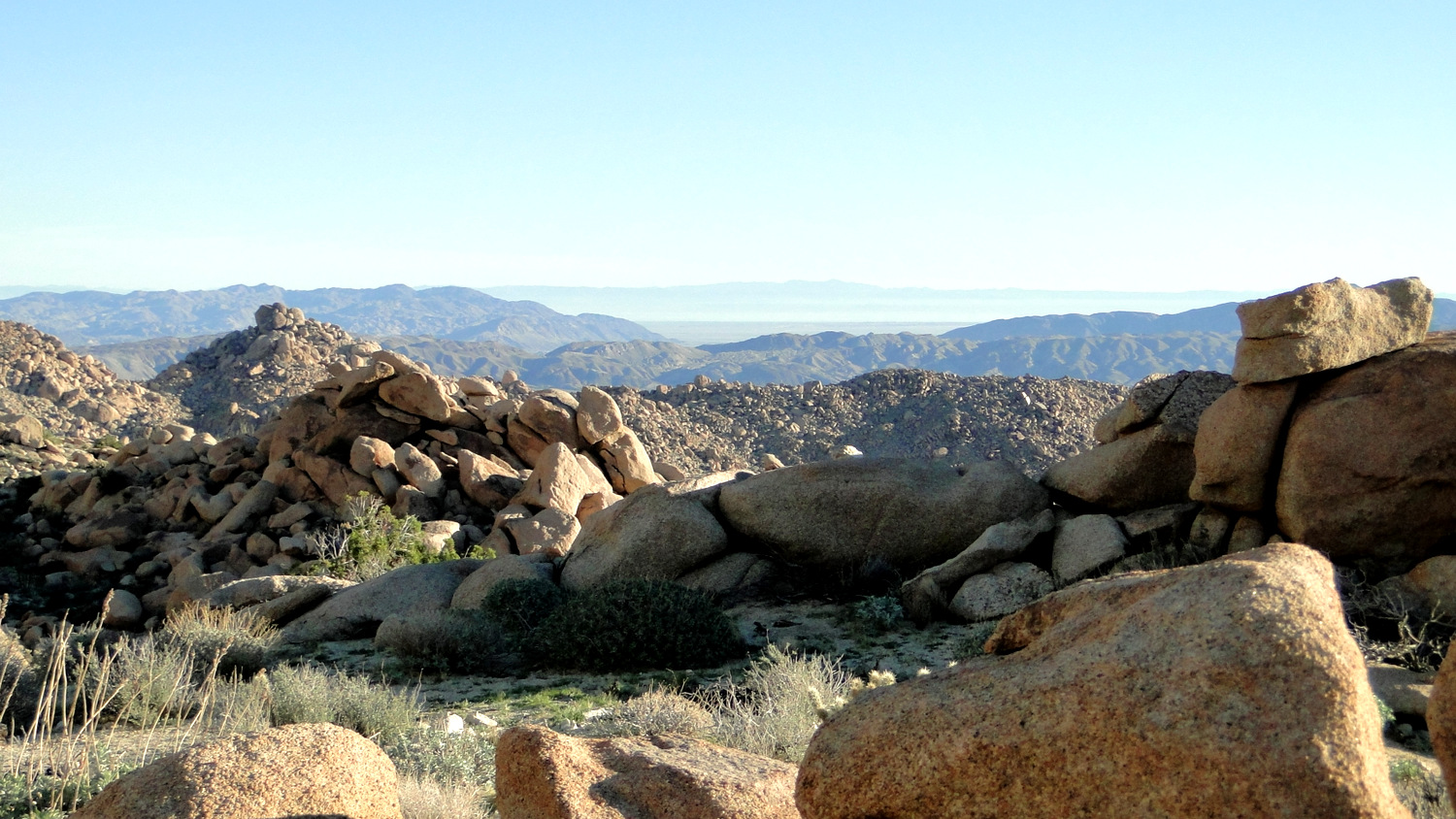 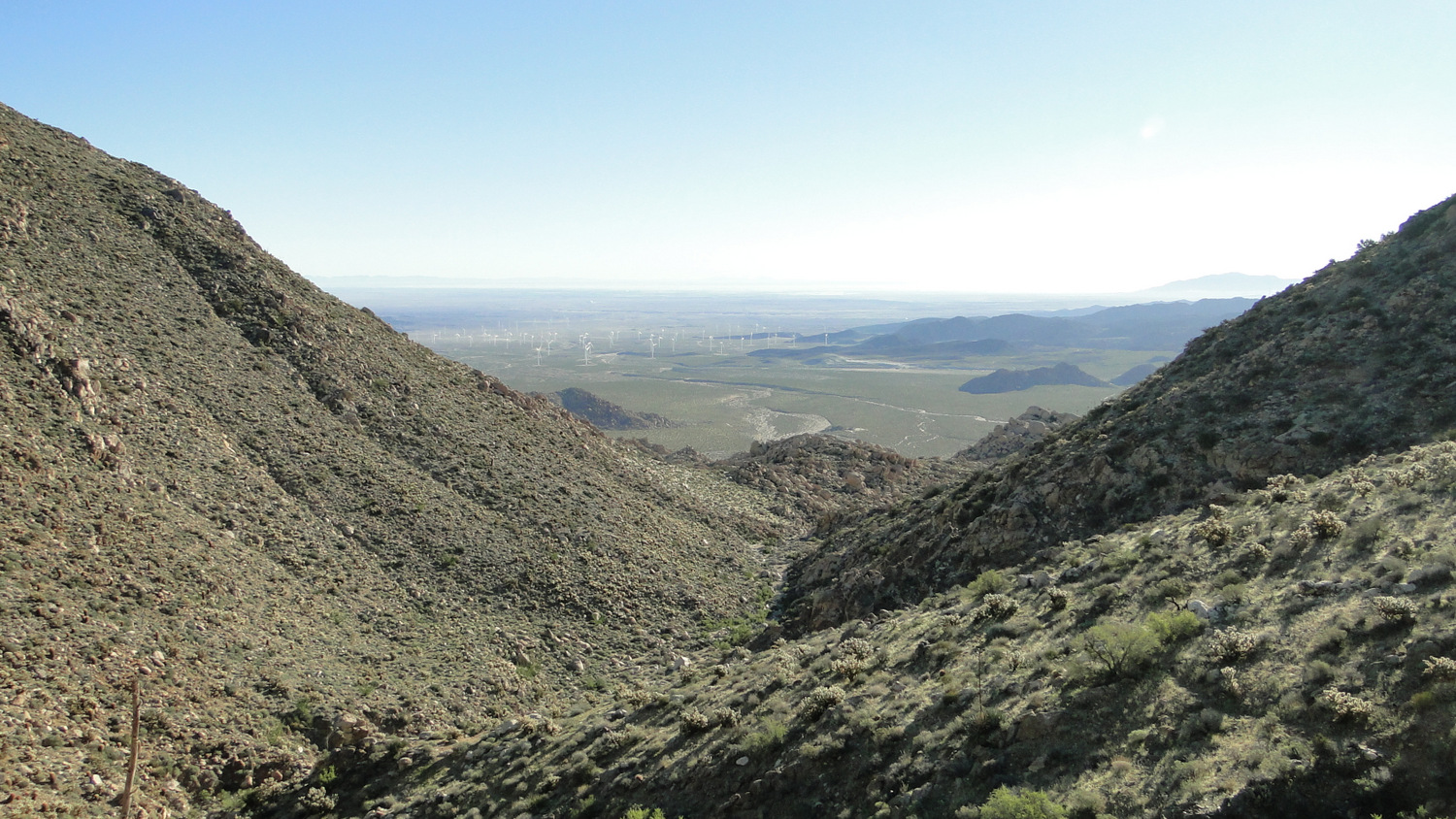 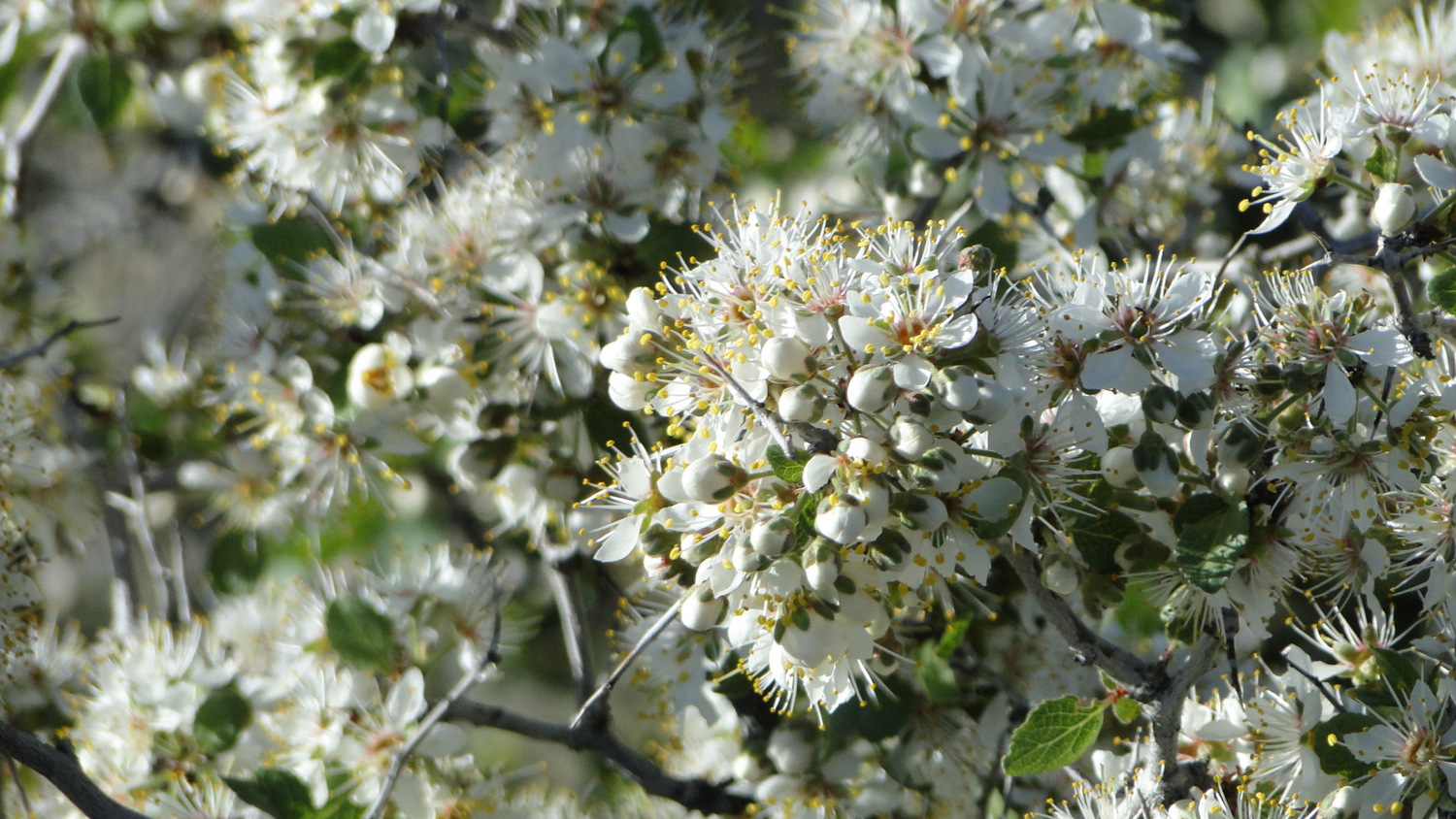 What trail you find on this route is informal and maintained by hiker traffic. The route mostly follows this trail, but there are some serious scrambling challenges on this route, including a rocky climb out of the palms and a steep descent into Goat Canyon.

As this is Anza-Borrego, you can camp essentially anywhere along the road, but do avoid camping in the Mortero Palms cultural area. You can backpack on this route with no red tape. The nearest developed campground is Bow Willow.

Low clearance cars may struggle. From San Diego, take I-8 east toward El Centro. Exit at Imperial Highway (Highway S2), and turn north toward Anza-Borrego Desert State Park. Continue for 4 miles to unpaved Dos Cabezas Road, and turn left. Veer right onto EC 158 after 1.1 miles, then continue 4.5 miles heading west north of the train tracks. After 4.5 miles, cross the train tracks and turn left on the west side of the tracks. Continue .9 miles; turn left. Left at .3 miles, right to Mortero Palms.