The East Beach to Fort Point hike checks off so many boxes it would be nearly impossible to design a more beautiful urban hike in San Francisco. Nose-to-tail views of the Golden Gate Bridge? Check. A historic, Civil War era fort? Check. Beach access? Check. A short walk to the Palace of Fine Arts? Check. In short, the Golden Gate Bridge views, bay views, kite surfers, beaches, Warming Hut, and the chance to go inside Fort Point, a national historic site, make this an insanely fun, stimulating, and refreshing hike. 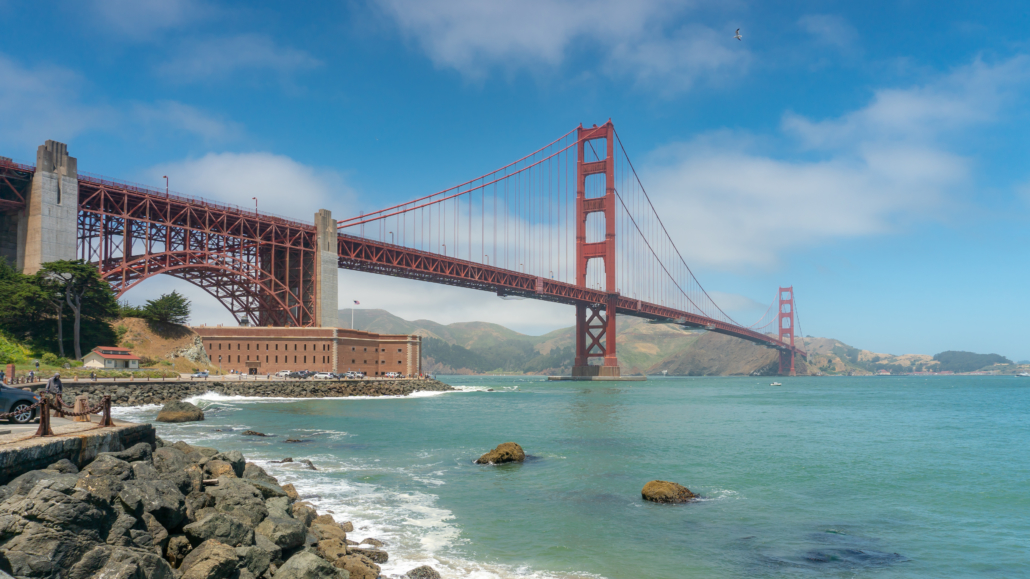 So let’s go! Begin your hike at the far eastern side of the parking lot, heading south on Yacht Road towards the Palace of Fine Arts. (A diagonal crosswalk near Crissy Field Center also leads to the Palace.) Follow the patchwork of crosswalks across Marina Boulevard and pick up the paved pedestrian path. 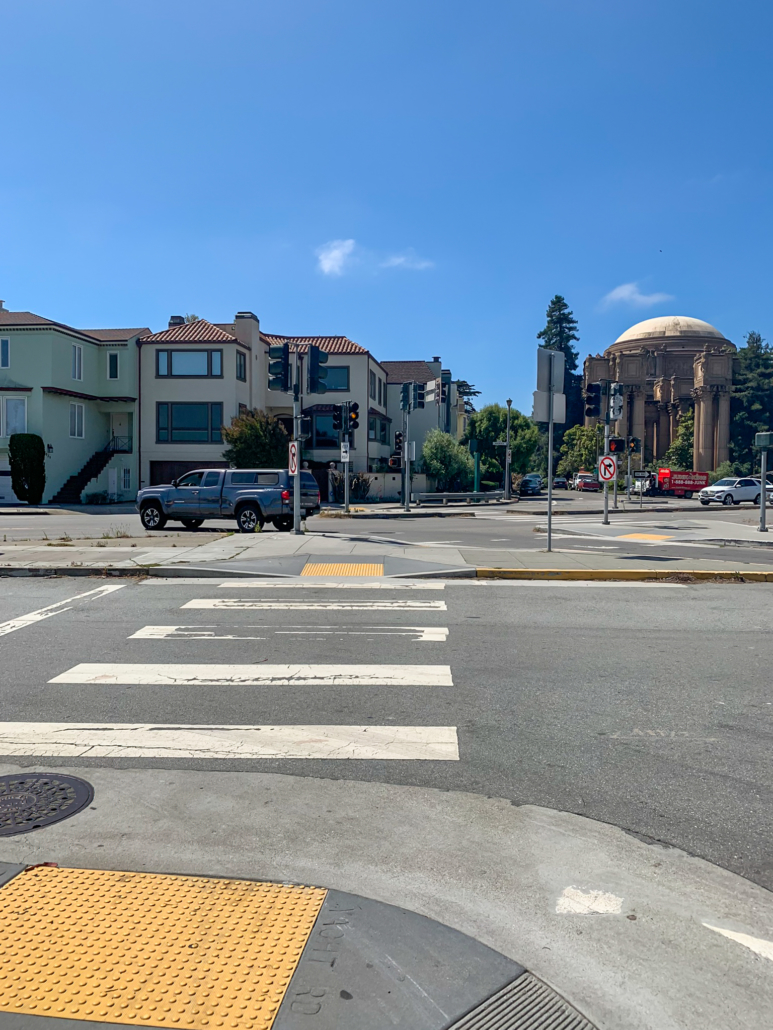 A patchwork of crosswalks leads across Marina Blvd to the Palace.

Architect Bernard Maybeck designed the Palace of Fine Arts for the 1915 Panama-Pacific International Exhibition (PPIE). Interpretive signs line the loop to give you background and history of the Palace. Maybeck, a fan of incorporating landscaping and nature into his designs, used an existing freshwater lake to create a reflecting pool in front of the grand rotunda and colonnade. 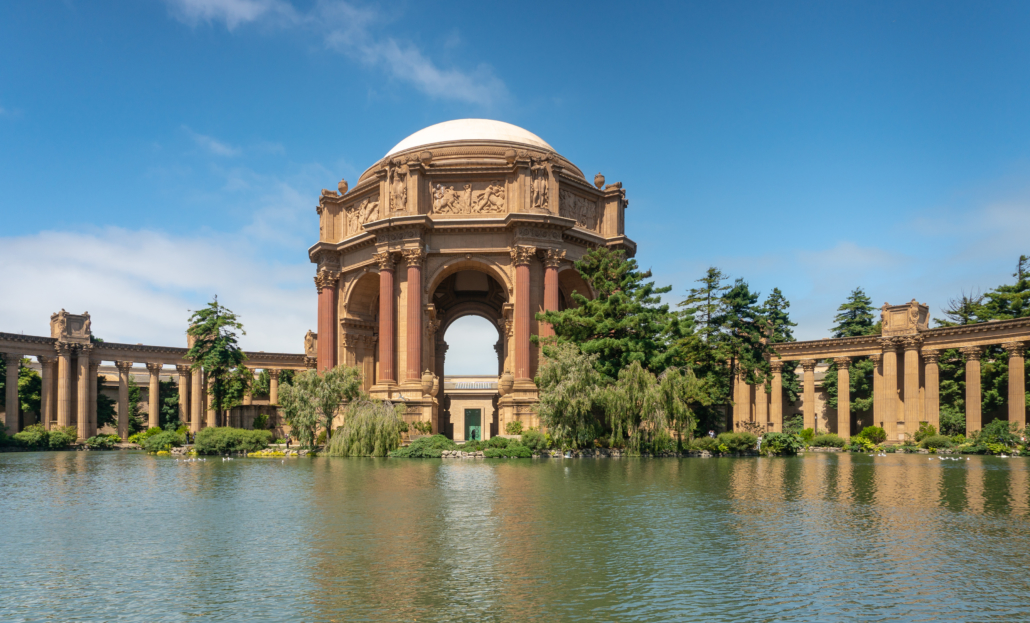 The rotunda and colonnade rise above the reflecting pool. The loop leads underneath the rotunda.

Most buildings were torn down after the PPIE ended; however, San Franciscans thought the Palace was too picturesque to demolish. Over the years, the exhibition hall behind the rotunda was used as storage during World War II, a distribution center for telephone books, and temporary headquarters for the San Francisco Fire Department. By mid-1950, the Palace had begun to crumble, but the community rallied to restore it. Reconstruction began in October 1964, and the Palace reopened on September 30, 1967. Along the 0.5 mile paved path you are likely to run into tourists, families with strollers, and couples taking engagement photos. 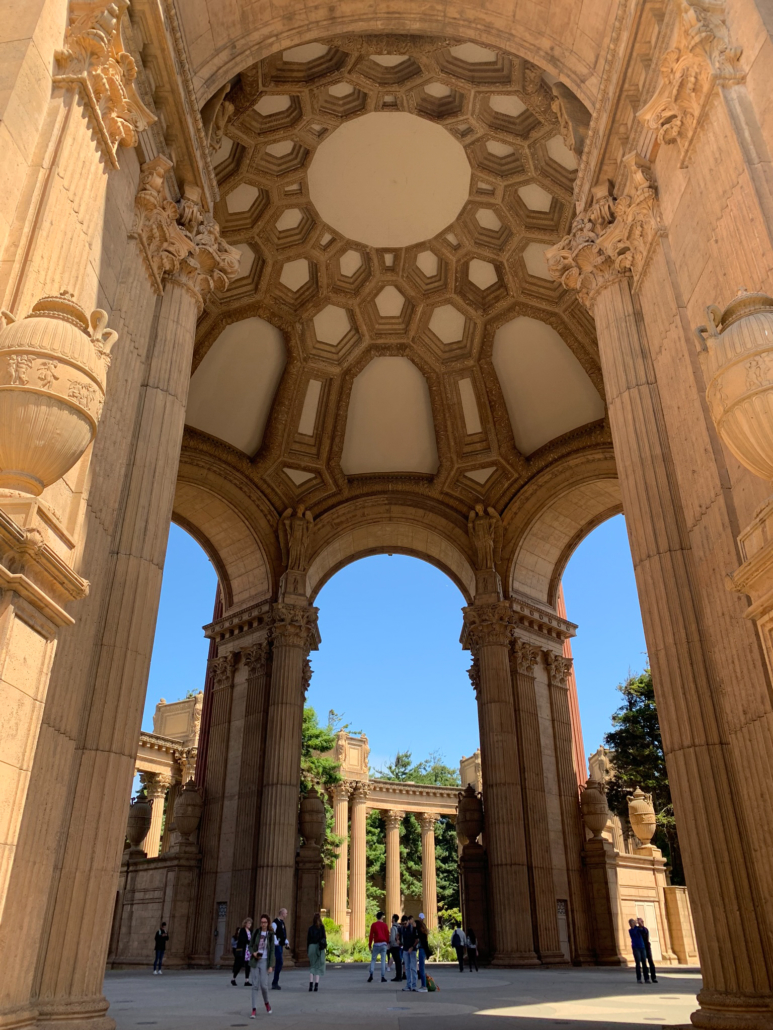 After you have finished your loop, return to the patchwork of crosswalks and hike north on Yacht Road. Straight ahead, at the shoreline, is a concrete overlook with a steep set of stairs leading down to the beach. A 180-degree panorama spans east to west: Alcatraz, Angel Island, the Marin Headlands, and the Golden Gate Bridge. This area is a popular spot to watch kite surfers grasping the wind and gliding among sailboats and ferries. 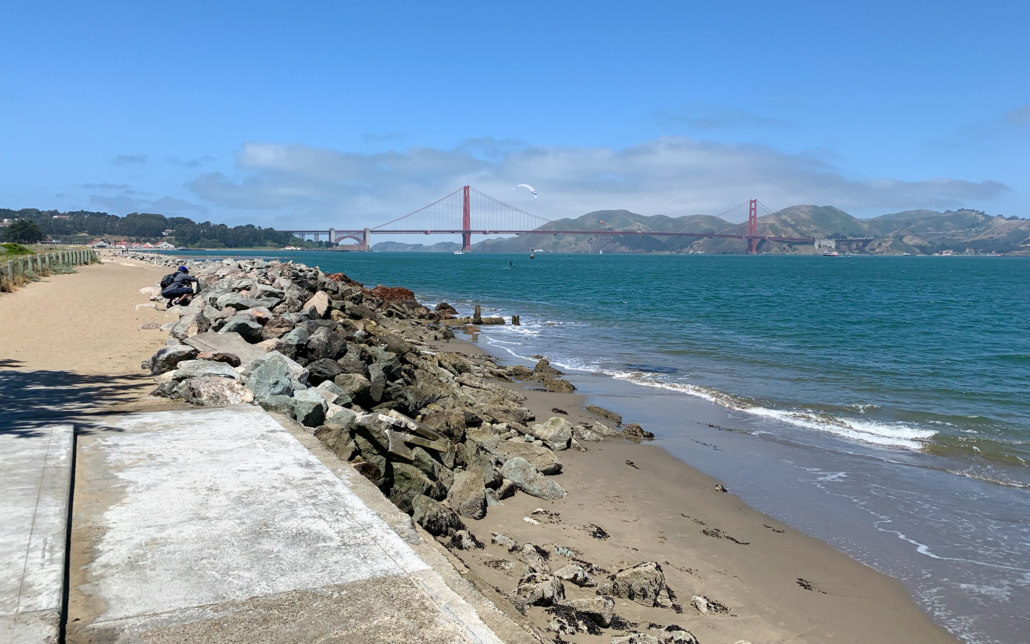 Kite surfers park at the East Beach parking lot and can be seen along the shore.

At the 1.0 mile mark, hike west on the Crissy Field Promenade towards the Golden Gate Bridge. The Promenade borders the northern shoreline of San Francisco and is one of those rare trails with panoramic views from start to finish. Along the way, there are access points to East Beach, making it easy to get a close look at the bay, have a picnic, or play in the sand. There is no lifeguard on duty, so if you do take a dip, just know that you are swimming at your own risk. 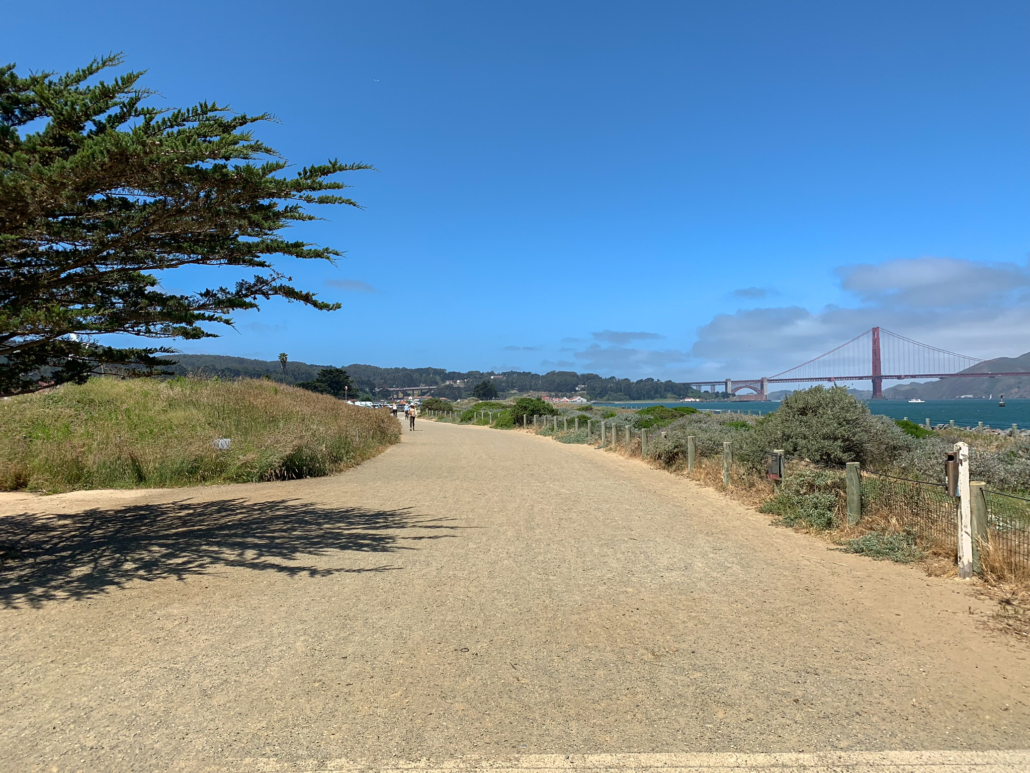 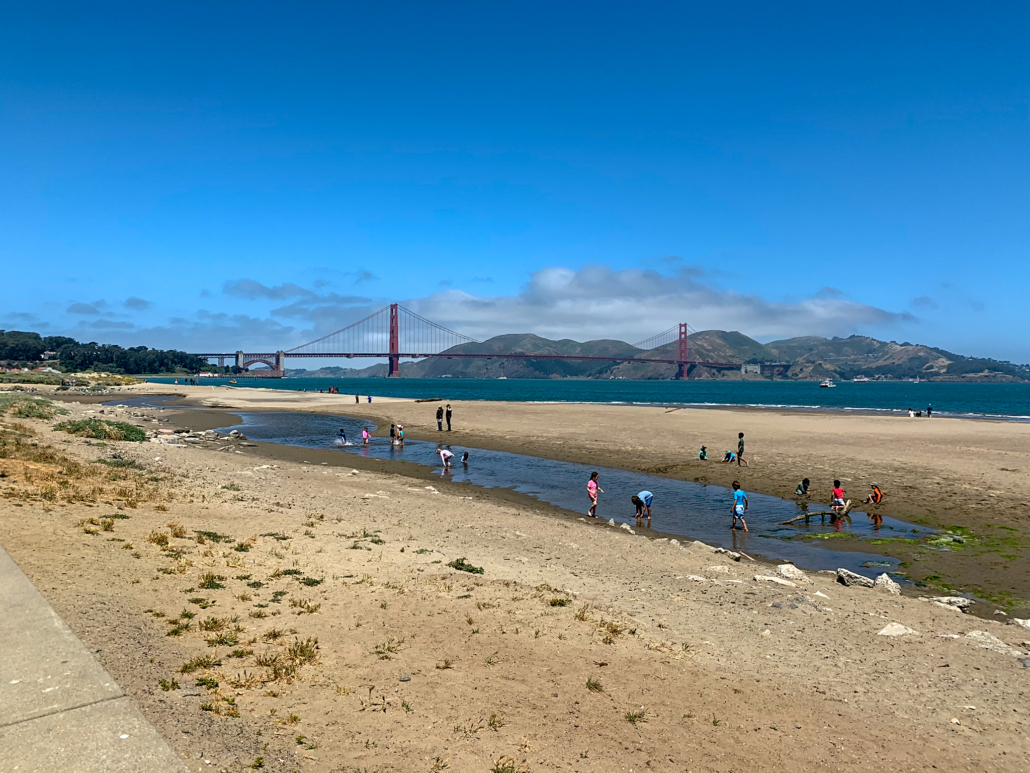 Children play in Crissy Lagoon, recently restored and a hot spot for birding.

On your left is Crissy Field, named after Major Dana H. Crissy, a coast artilleryman fascinated with the new field of aviation in the early 20th Century. Crissy transferred to the Aviation Section of the Signal Corp in 1917 to pursue his passion and was soon promoted to Commander of Mather Air Field in Sacramento. In 1919, Crissy participated in a military event, the Transcontinental Reliability and Endurance Test, where pilots on opposite coasts raced to see who could cross the continental United States first. The idea was to challenge the skill and endurance of pilots and to test the aircraft. Sadly, Crissy crashed and perished trying to land his plane in Utah on the very first day of the event. His friend, Colonel “Hap” Arnold, commemorated Crissy’s sacrifice by naming the Presidio’s new airfield after him. In time, the field was no longer needed and suffered years of neglect. Crissy Field was restored in 2001 into the grassy picnic and recreation area we see today. 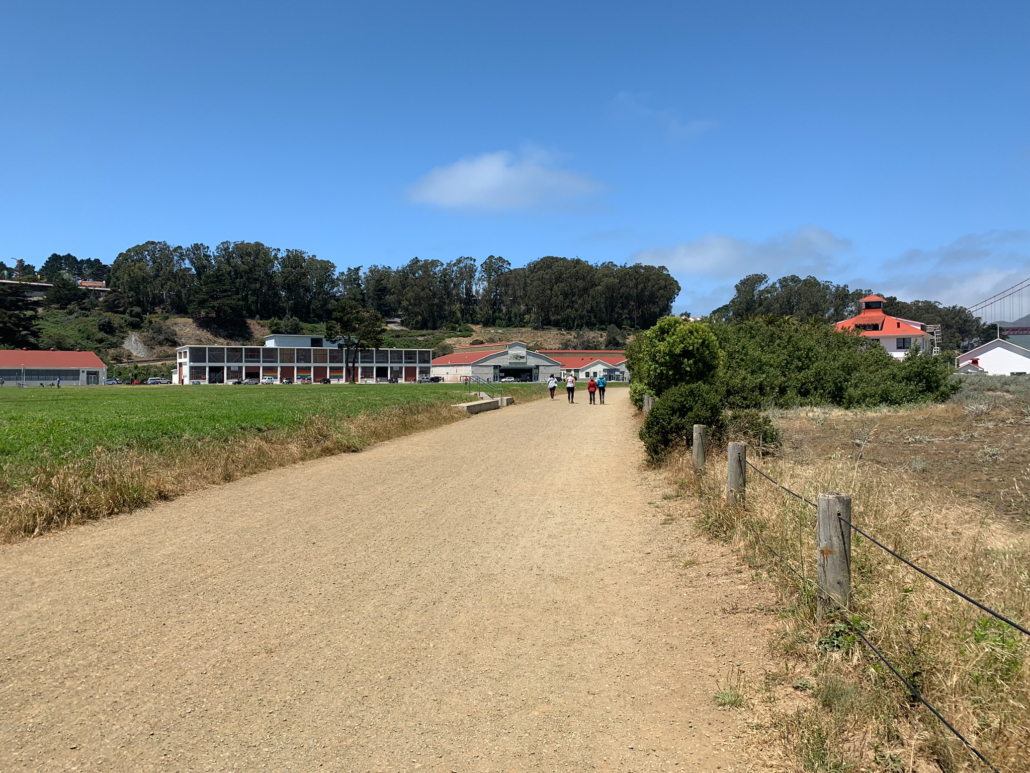 Crissy Field on the left is named after Major Dana H. Crissy, a pilot who perished in 1919.

At 2.1 miles, the Crissy Field Promenade passes the Crissy Field West Bluffs and picnic area overlooking the bay and Golden Gate Bridge. There is pay parking behind the bluffs and this is a popular spot. It’s easy to see why. By now you are close enough to the Golden Gate Bridge to make out the vertical stripes along the 746-foot-tall towers’ horizontal panels. Square “windows” shorten and widen above each panel, making the towers seem taller. And of course, the bridge’s International Orange color stands out elegantly against the blue hues of the sky and water. The color, an unusual choice, was influenced by the red primer that Bethlehem Steel used to coat the bridge materials with once they were fabricated. As the bridge was built, Architect Irving F. Morrow admired the effect the red primer had and ultimately chose the similar International Orange color because it harmonized with the landscape and stood out against the sea and sky. 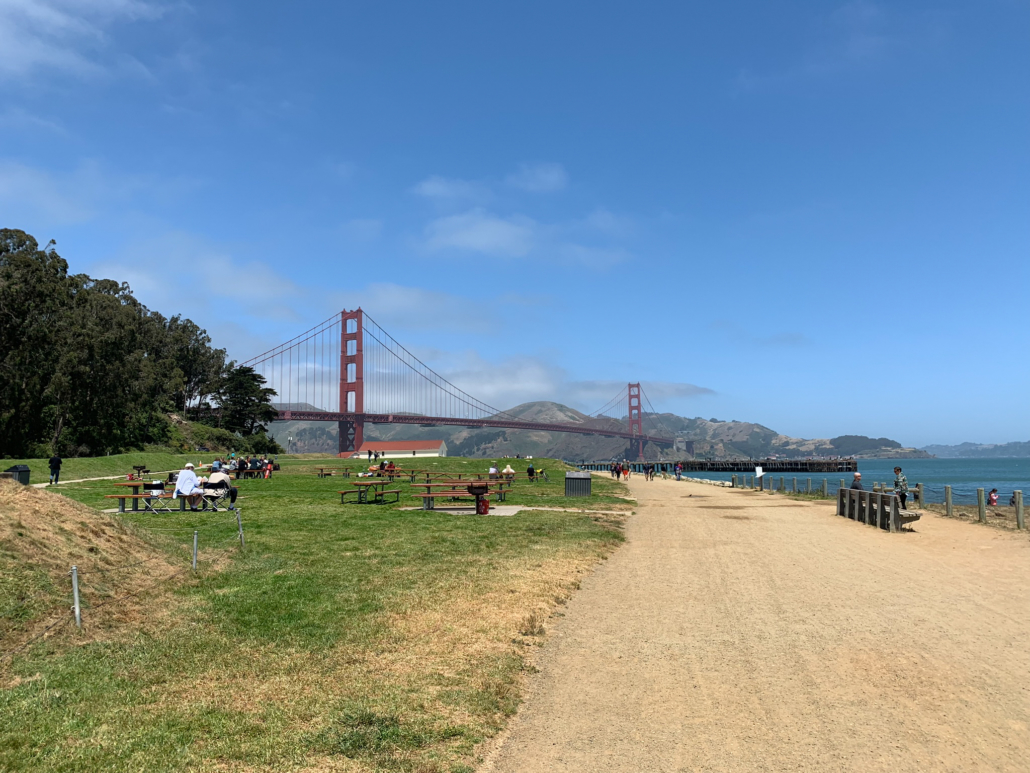 The West Bluff Picnic Area, on the left, is a popular spot for visitors.

Beyond the picnic area is the Warming Hut, a café and gift shop run by the Golden Gate Conservancy. The cozy hut is a worthwhile a stop to pick up a snack, espresso, or buy souvenirs like books, gifts, and Golden Gate Bridge mementos. If you are a cortado nut like me, I can vouch for the café’s cortado-making skills. 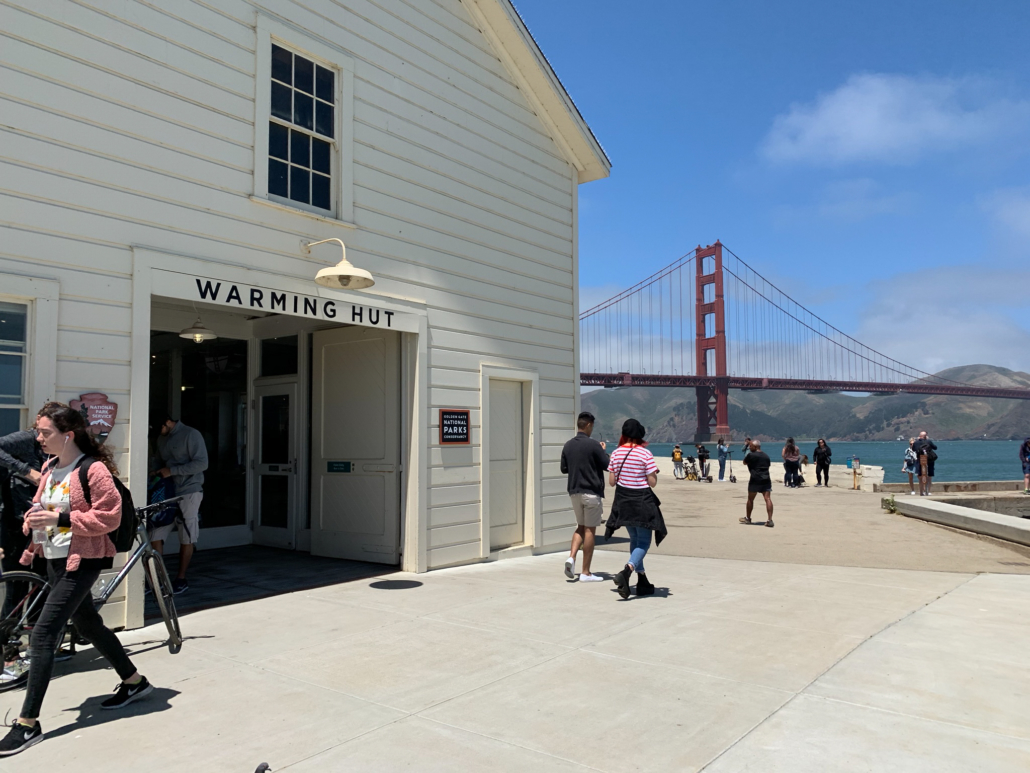 Heading west after the Warming Hut, merge onto Marine Drive towards Fort Point. Keep to the side of the road; cars will be coming up behind you looking for a coveted free parking spot at Fort Point (an alternative free parking lot for this hike). Surfers catch waves on the eastern side of the fort, and on the fence beyond the parking lot are Hopper’s Hands, a “high-five” for runners to hit before turning around and finishing their runs. 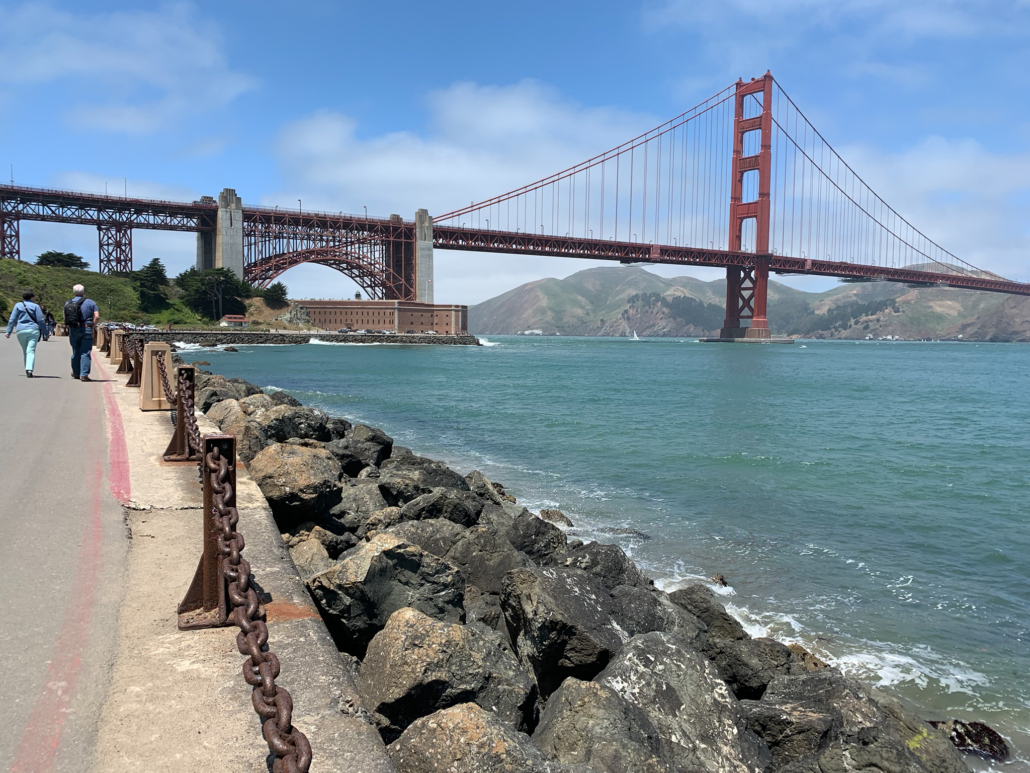 At 2.8 miles, walk through south entrance of Fort Point (open Fridays, Saturdays, and Sundays from 10:00 a.m. – 5:00 p.m.) into the tiered fort, built between 1853 and 1861. To the right is a gift shop and small theater, which shows a promotional video by Bethlehem Steel of the Golden Gate Bridge’s construction. It’s also available on YouTube if you don’t have time to see it during your visit. 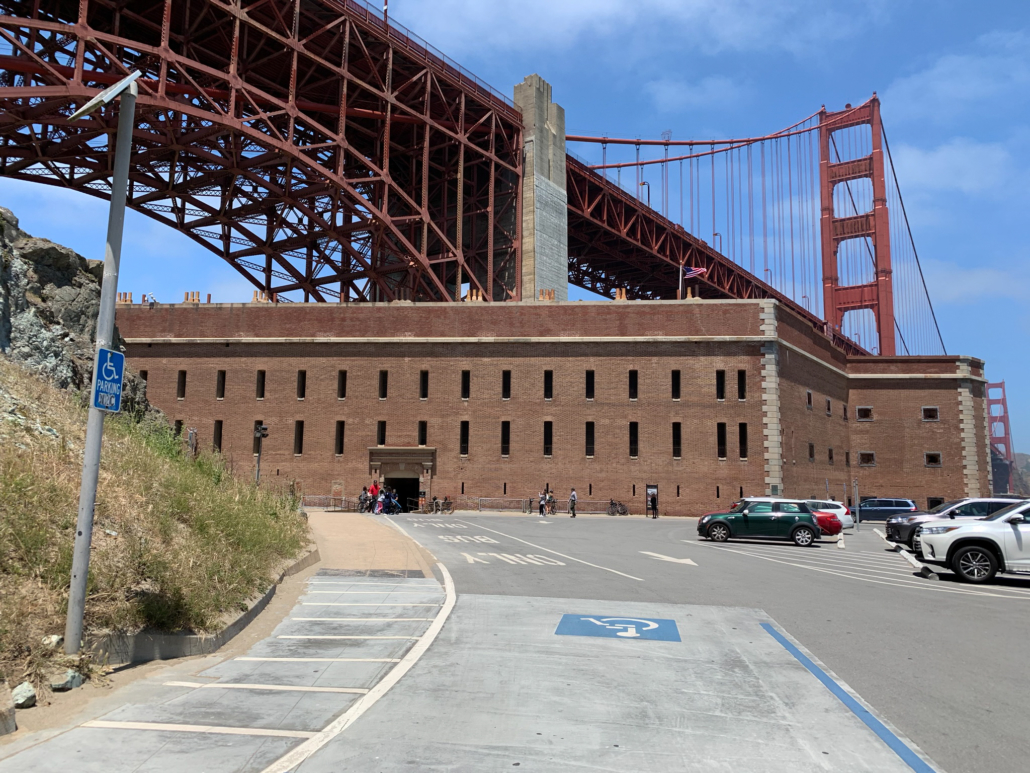 The small south entrance to Fort Point. The fort’s hours can change seasonally, but it is generally open Friday-Sunday.

The main floor has exhibits about the fort’s history, artillery, and barracks. Take the stairs to the “barbette tier,” aka roof, for exquisite views of the Golden Gate, Golden Gate Bridge, coastline, and Marin Headlands. It is windy up there, but an absolute highlight of the hike! The very western side of the roof is directly under the Golden Gate Bridge. 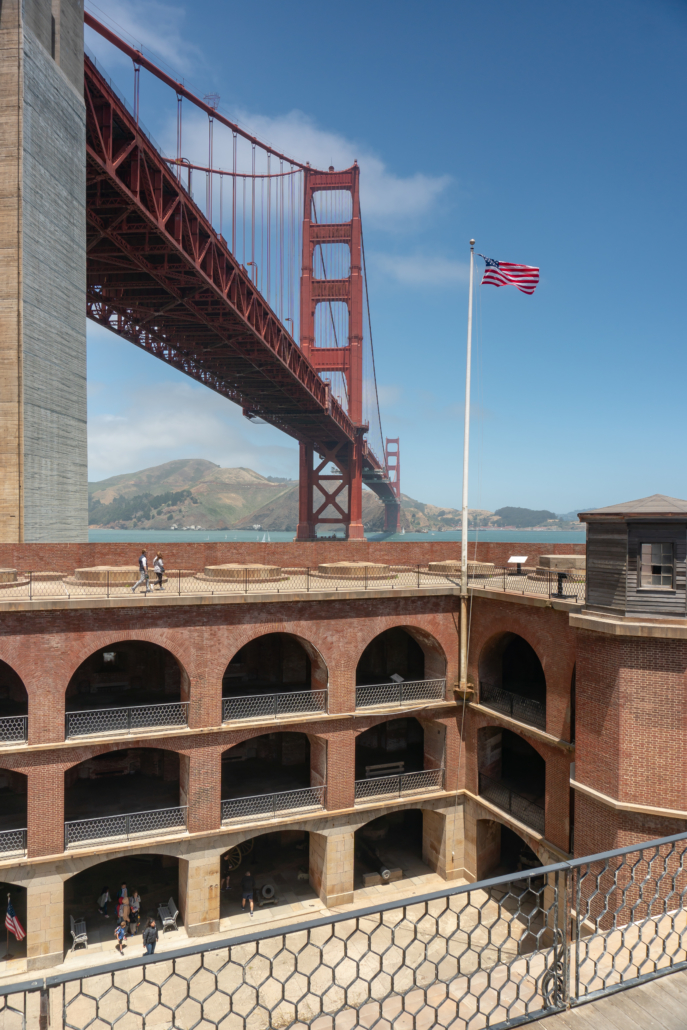 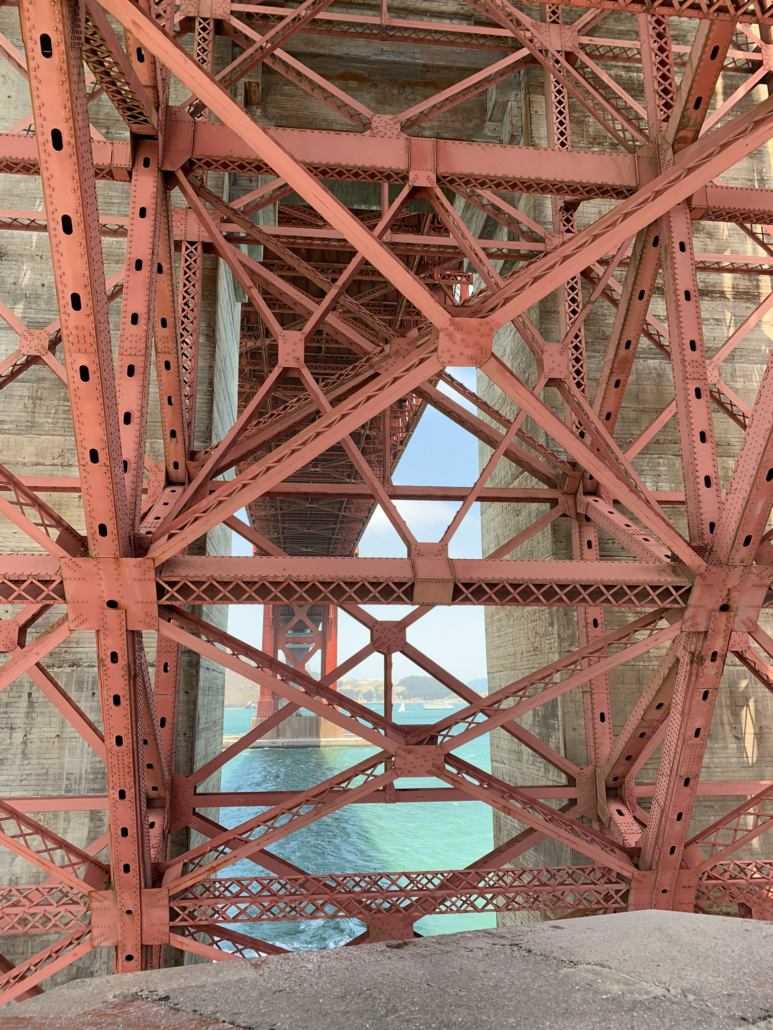 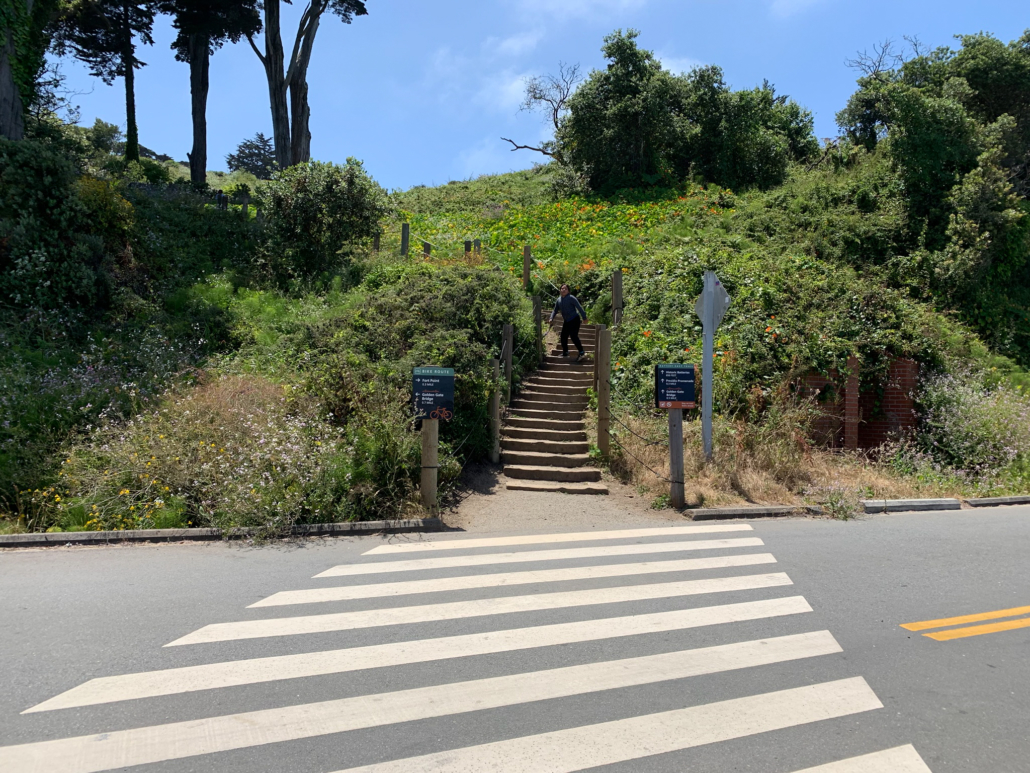 Walking back along the shoreline you have an east-facing panorama of the Bay Bridge, Treasure Island, the San Francisco skyline, Crissy Lagoon, and the Palace of Fine Arts. 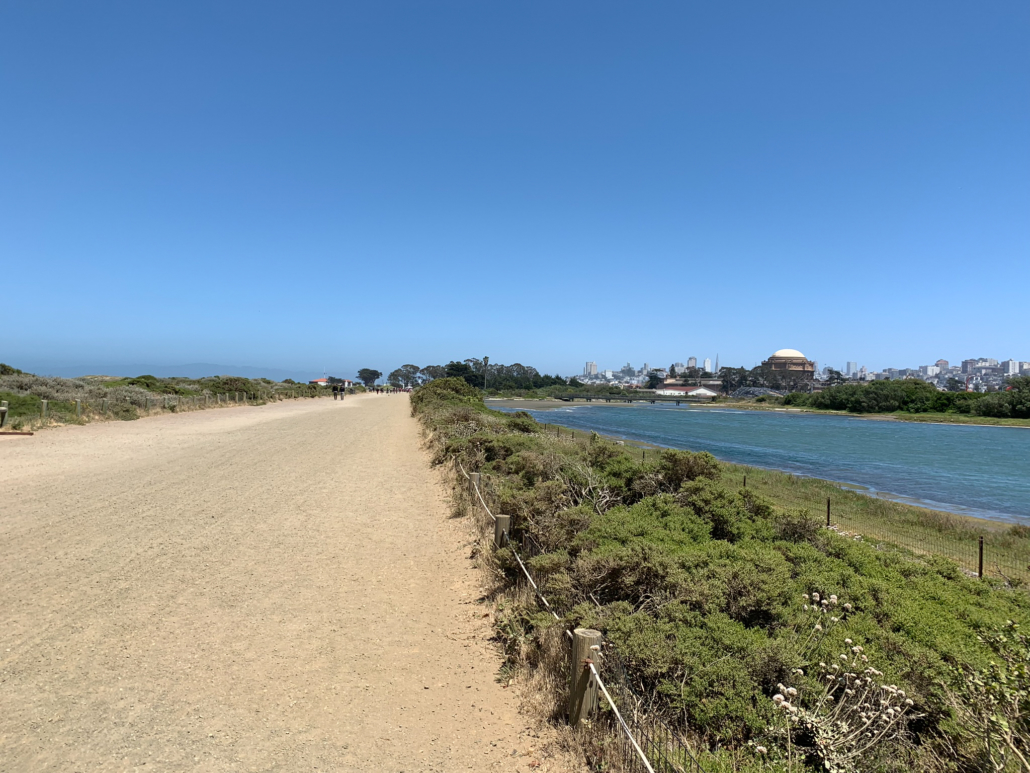 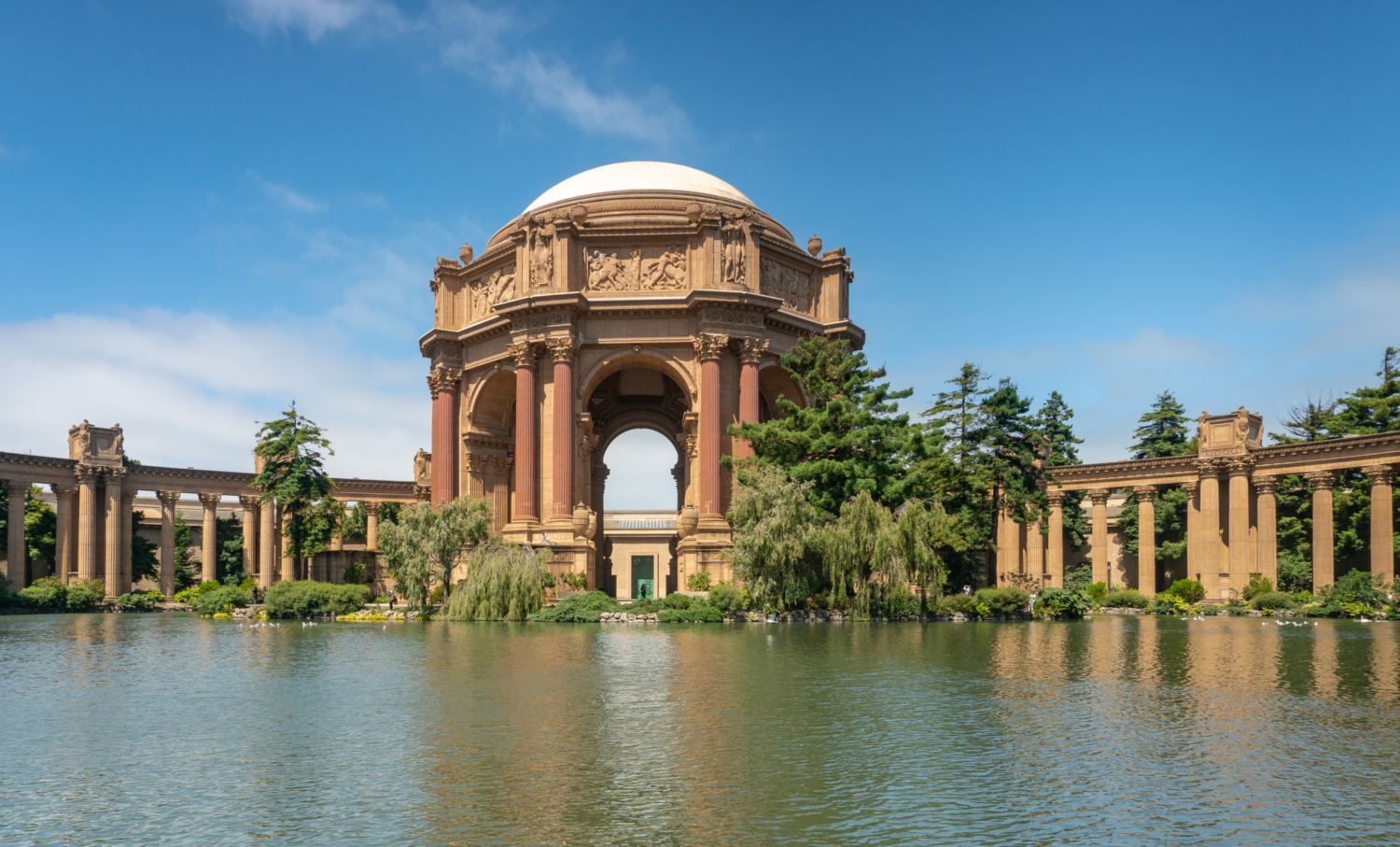 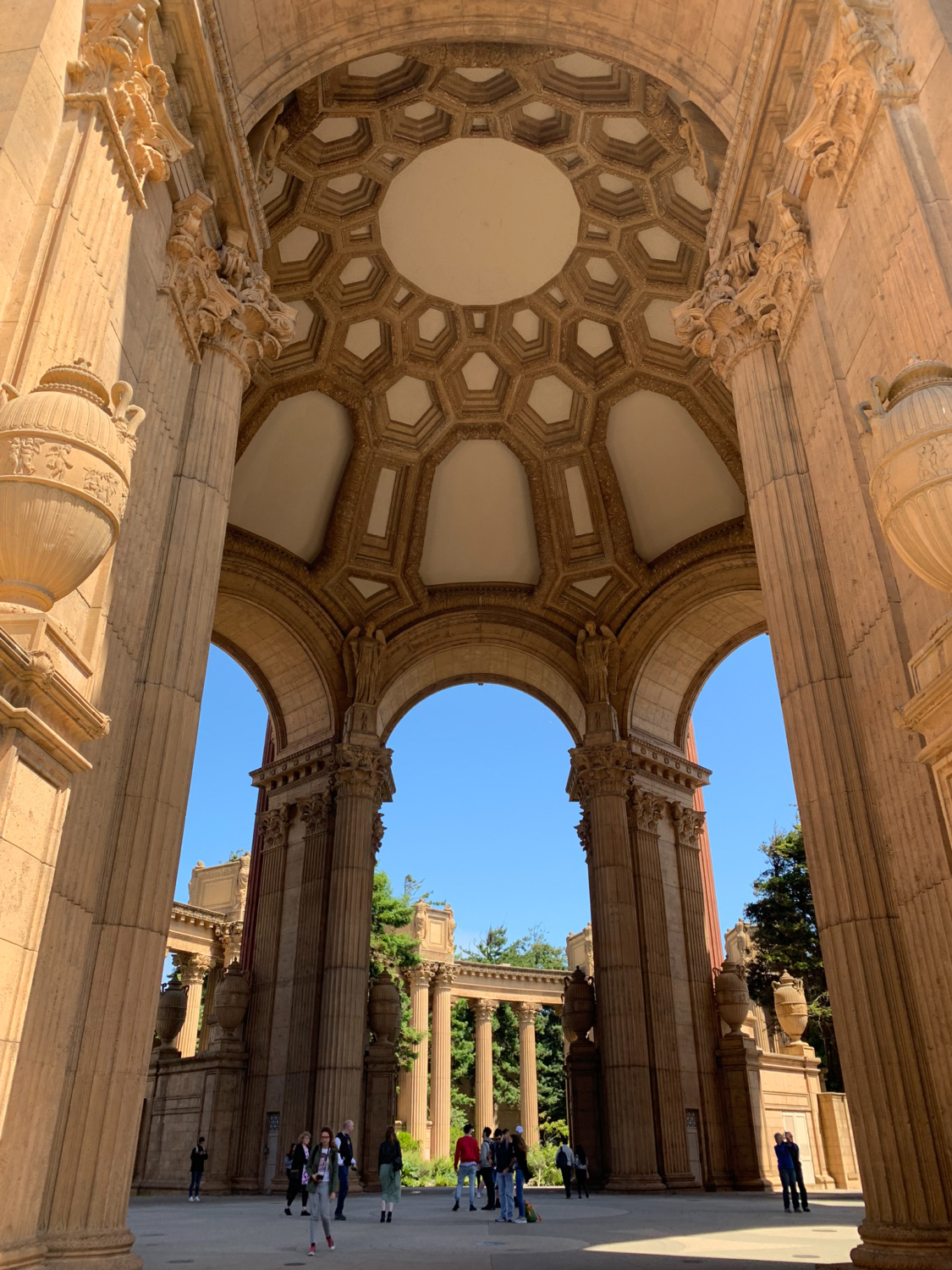 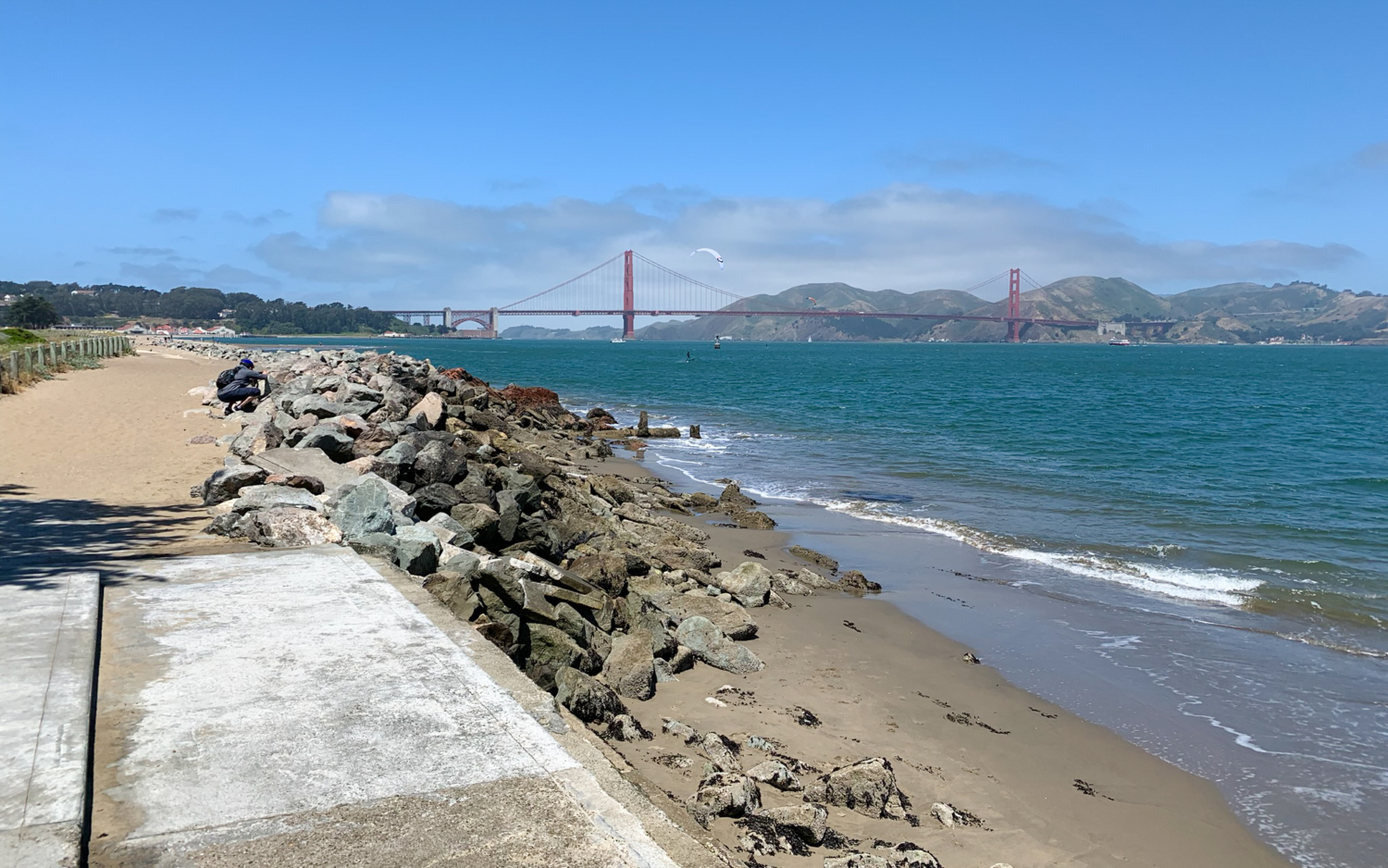 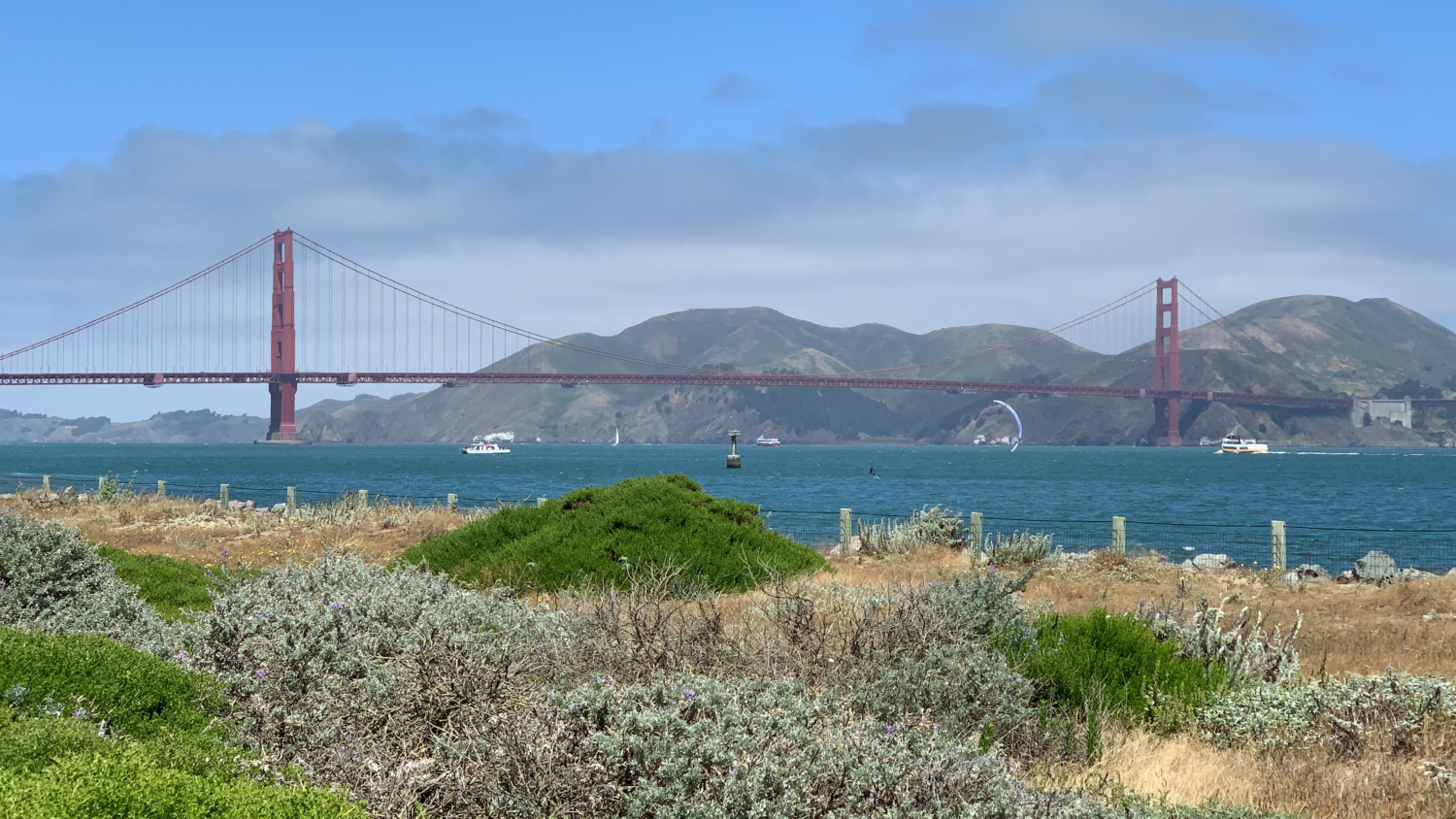 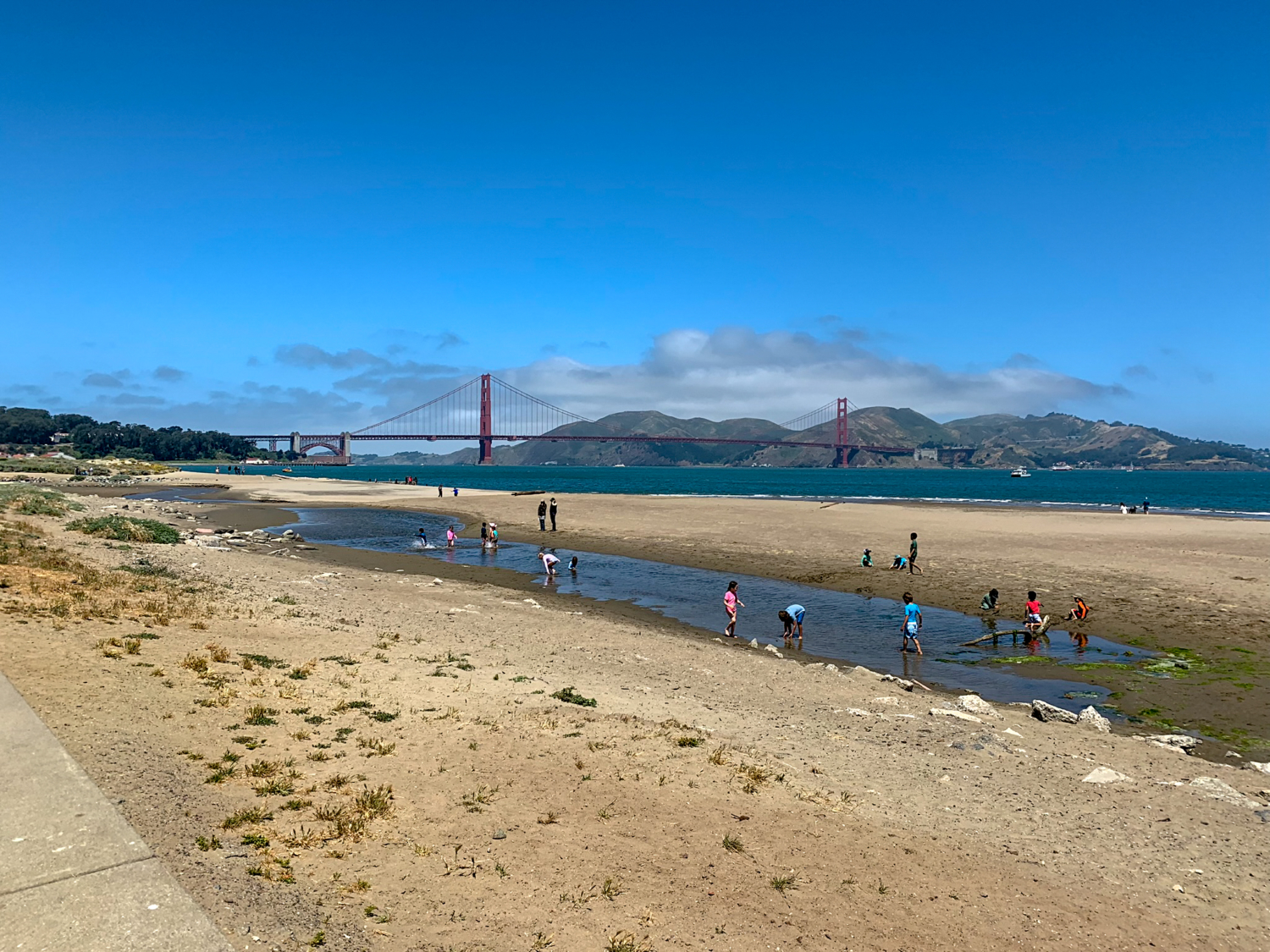 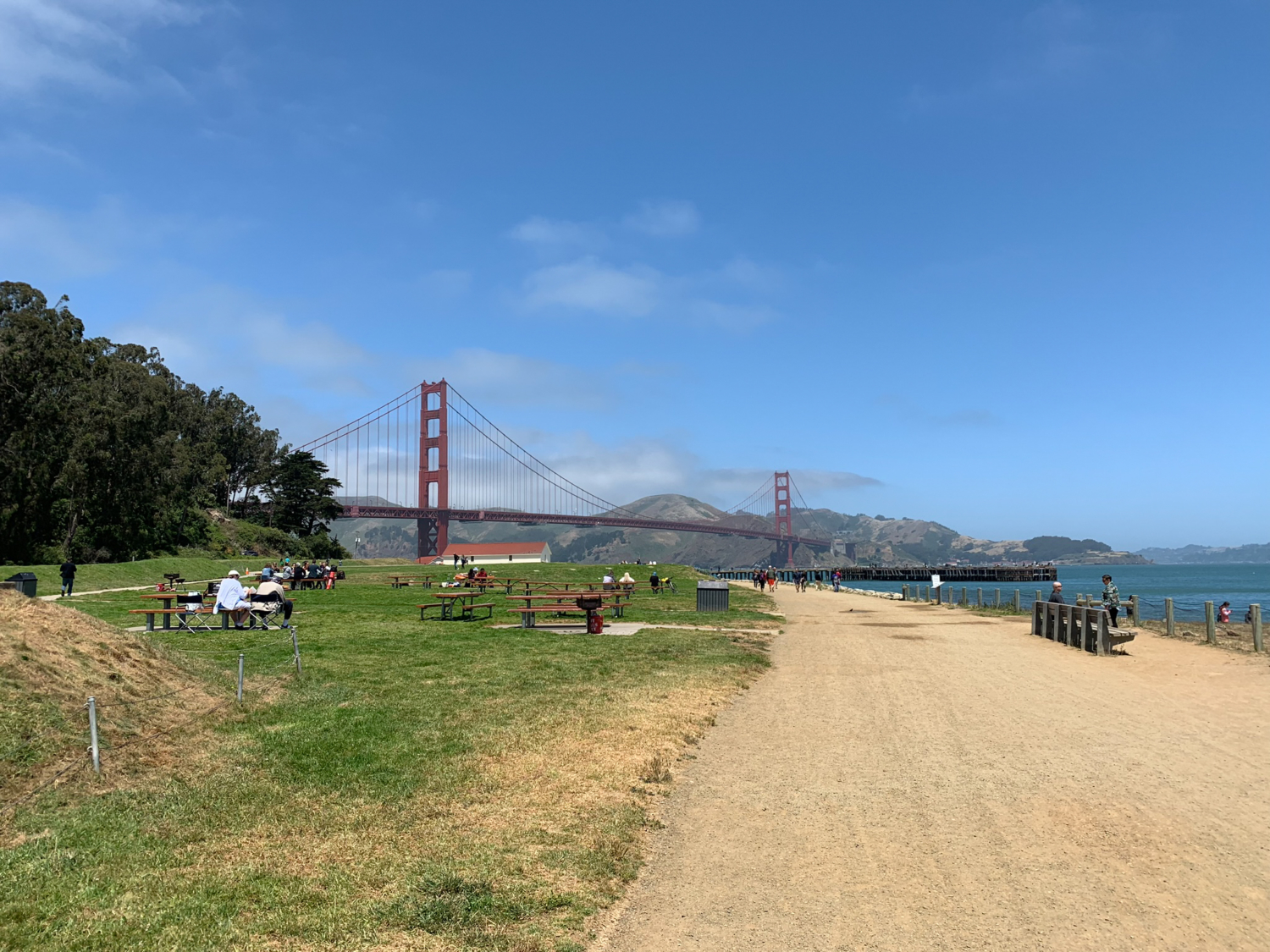 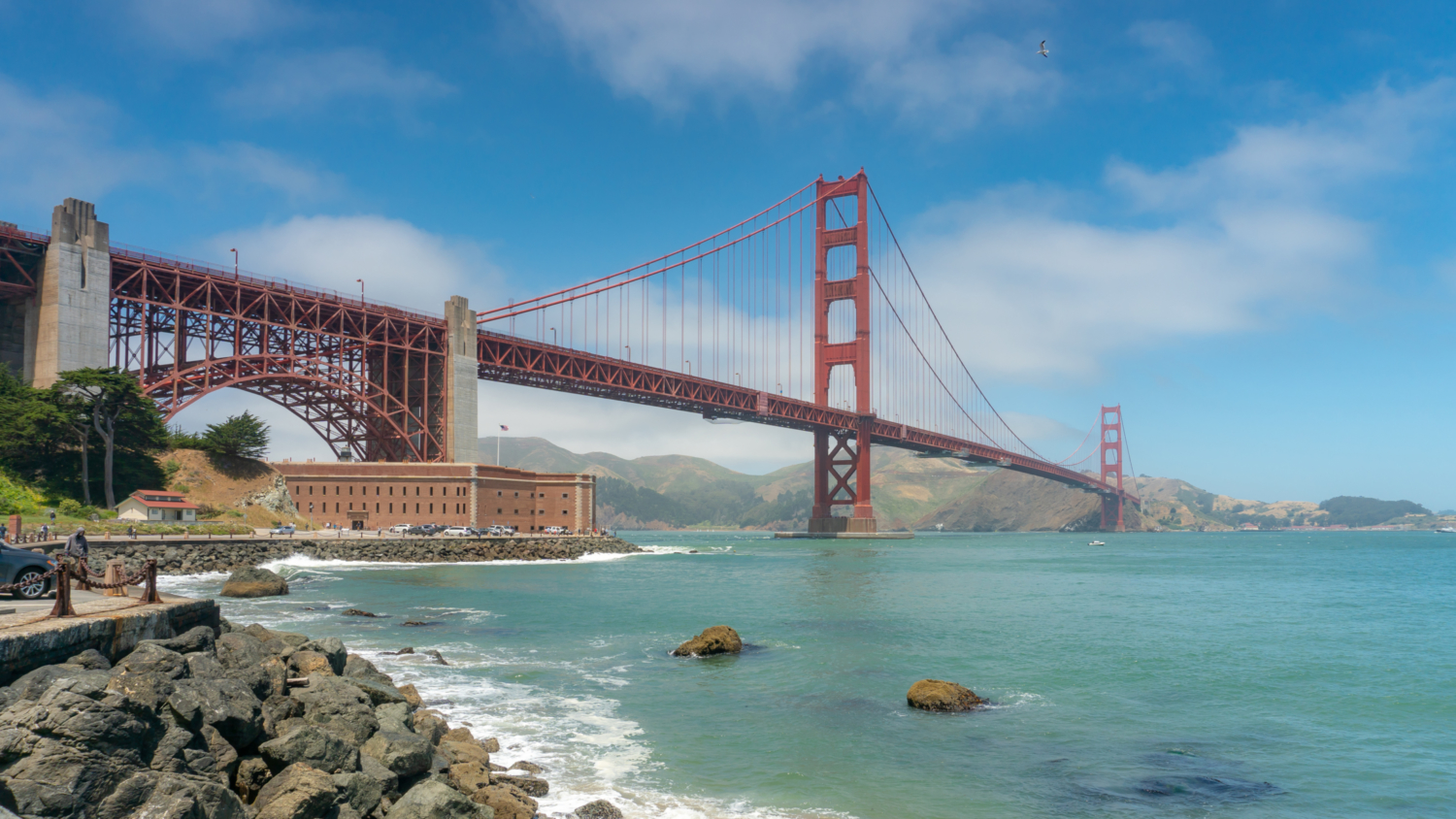 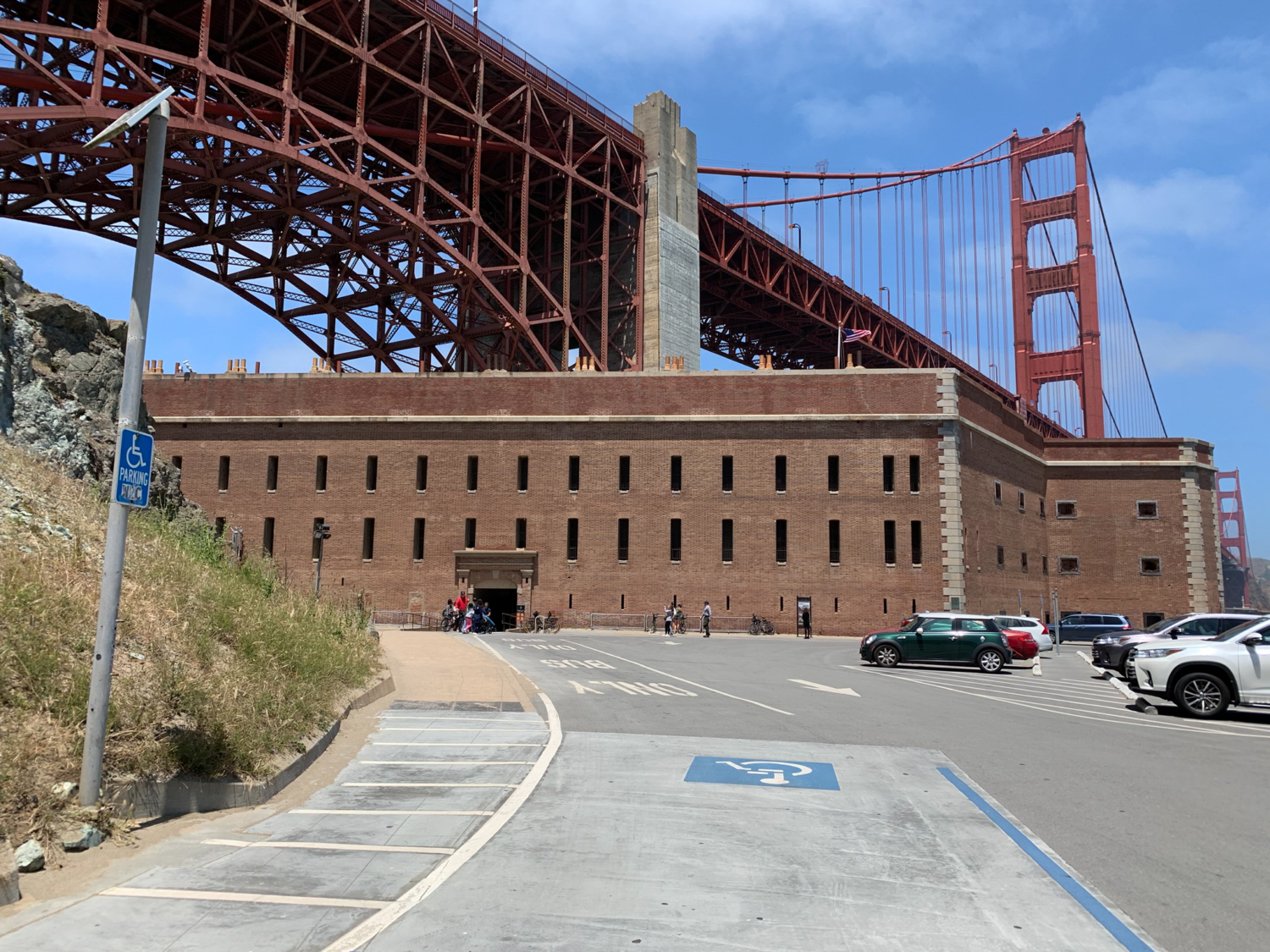 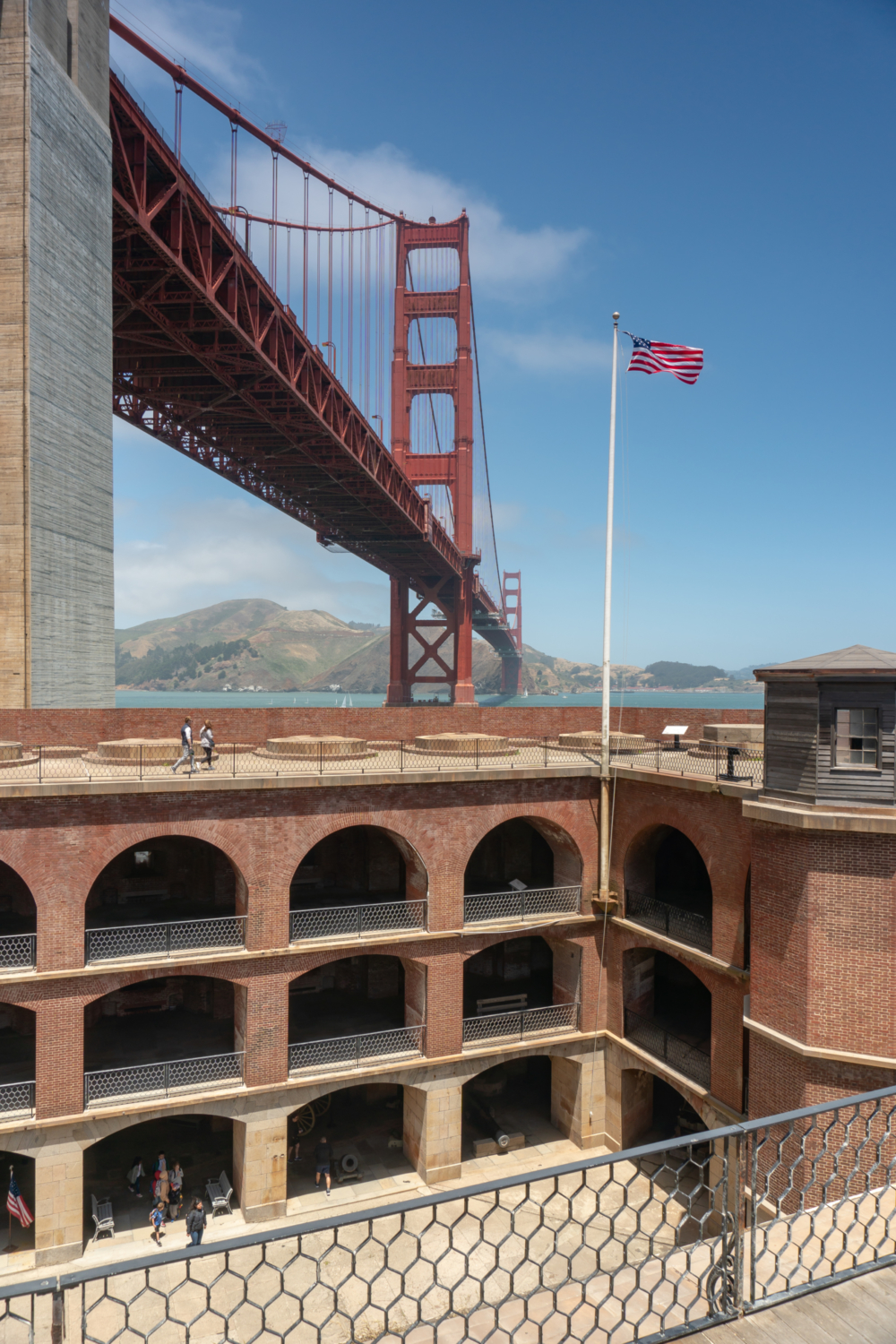 Trails are flat and wide. There is a sidewalk on the eastern side of Yacht Road, and three short crosswalks connecting to the Palace of Fine Arts. Crissy Field Promenade, the trail that runs west-east from East Beach to Fort Point, is generally accessible. The first floor of Fort Point is accessible; stairs lead to the upper tier.

Rob Hill Campground in the Presidio is a 2.2-mile walk from East Beach. It is open from April-October and has two campsites that hold up to 30 people. Campfires are allowed in established fire rings. There are restrooms but no showers. Pets are not allowed with the exception of service dogs.