Double Peak is an easily accessed, moderate peak offering great views over North County, coastal San Diego, and toward East County. In addition to a healthy climb and good views, Double Peak boasts a nice park at the summit, complete with picnic benches, a few trees for shade, a free viewfinder, and flush toilets. 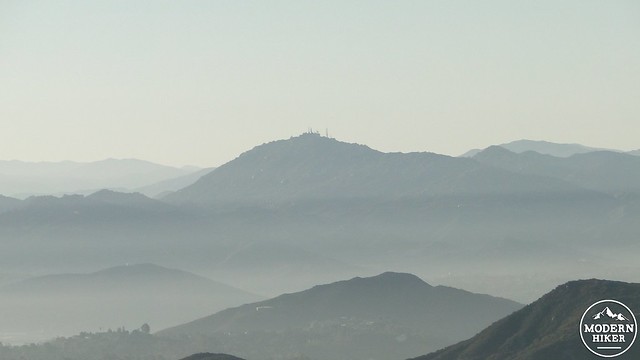 Mt. Woodson from the summit

Double Peak does not have the wild character of so many other peaks in the San Diego region, but it makes up for this lack of wild character by offering good views and nice amenities at the summit. The views from the top are equal to and sometimes greater than the views available at some of the more far-flung locales around the west side of the county, and a free viewfinder at the summit enhances the ability to enjoy the finer points of the panorama. 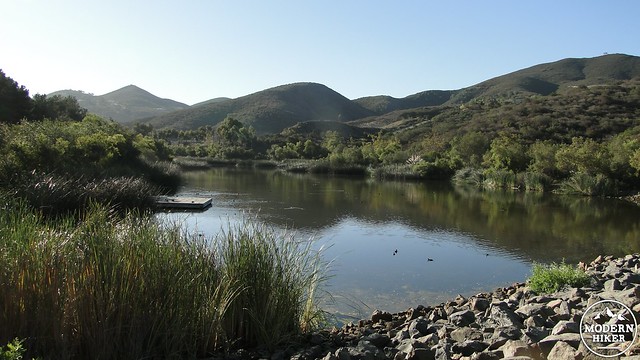 Discovery Lake near the trailhead

The trail starts out at Discovery Park, where it crosses over the spillway containing Discovery Lake. Starting out early adds a nice layer of beauty, as the lake often puts forward a fine layer of mist. Additionally, starting out and ending at a body of water is a nice reward, considering the dry grind ahead. 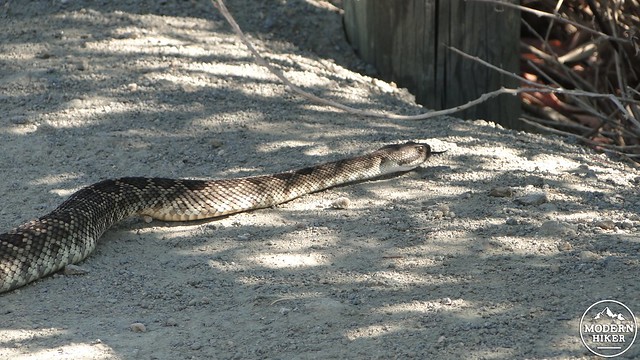 After the lake, the trail climbs up a smooth dirt path for about a quarter of a mile before entering a residential housing development. The trail will pass through this subdvision on the right side of the street. This community trail will connect you to the continuation of the Double Peak Trail, which lies just uphill from the start of the street-side trail off to the left. Signs will point the way, but keep in mind that if you bear left away from the dirt path, you will have gone the wrong way. 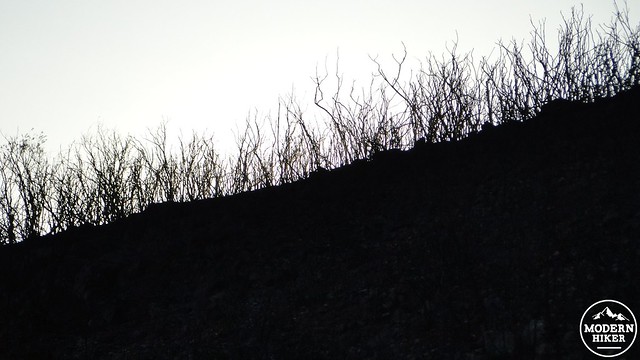 Skeletal remains of chaparral left by the 2014 Cocos Fire

The trail leaves the subdivision and starts the hardest stretch of climbing before coming to a water tank. The trail will bear left at the water tank and will leave behind the bulk of the developed sections. It should be noted that this portion of the Double Peak Trail was burnt during the May 2014 Cocos fire. Much of the chaparral here was thoroughly incinerated, although at the time of writing (August 2014), the chaparral had begun to make a modest comeback. As chaparral has evolved to handle fire, it is likely that the chaparral will make a full recovery within 5-10 years, depending on yearly precipitation. 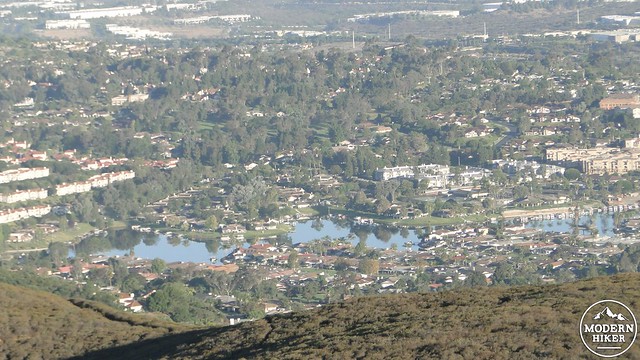 Lake San Marcos from near the summit

The trail will bend right into a ravine where it will junction with a trail leading off to the left. This trail looks tempting, as it is a nice flat stretch, but it will take you off in the wrong direction. Instead, take the branch to the right, which will switchback some more before coming out again at a partially paved access road. Bear left on this access road, which will join with the road leading to Double Peak Park. 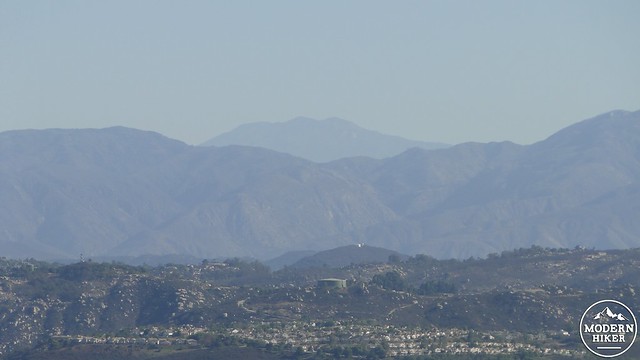 From here, the trail will run alongside the road, where you will be sharing the route with cars and bikers. This stretch is unavoidable, but there is an option for those who don’t mind a bit of a steep, rugged climb. Branching off the right from the side trail is a use trail that climbs up fairly severely along the cut in the road. This use trail will come out at the edge of the parking lot on top, where it will then reach the summit from a brief connector. 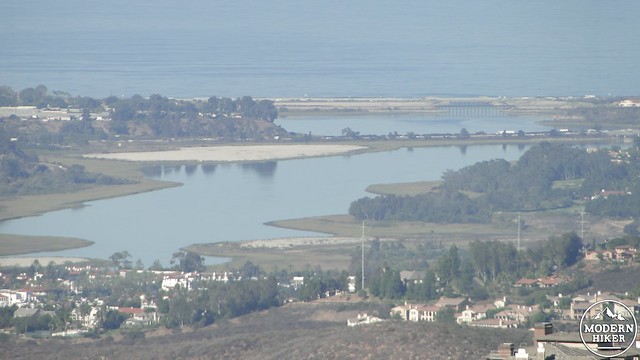 Once on the summit, you can enjoy the nearly panoramic views over the county. The views north are  particularly good, with untrammeled views of the Santa Ana Mountains, Camp Pendleton, Mt. San Gorgonio, the Palomar Mountains, and the communities of Oceanside, Vista, San Marcos, and Escondido. Mt. San Jacinto even makes a guest appearance, as its summit pops up and over Crosley Saddle near Agua Tibia Mountain.

For an added bonus, you can use the viewfinder to pick out other individual landmarks. On the day I last hiked Double Peak, which was exceptionally clear, I was able to pick out the Batiquitos Lagoon, Agua Hedionda Lagoon, the Carlsbad powerplant, the Oceanside pier, Legoland, and a host of other local landmarks like my house, my wife’s job, etc. etc. Landmark spotting is always a fun game, particularly if you’re a North County local who likes to “see my house from here.” The nearby picnic tables make this a comfortable place for a snack, and the restrooms are very clean and comfortable. From this point, you will retrace your way back down by following the route you took on the way up. 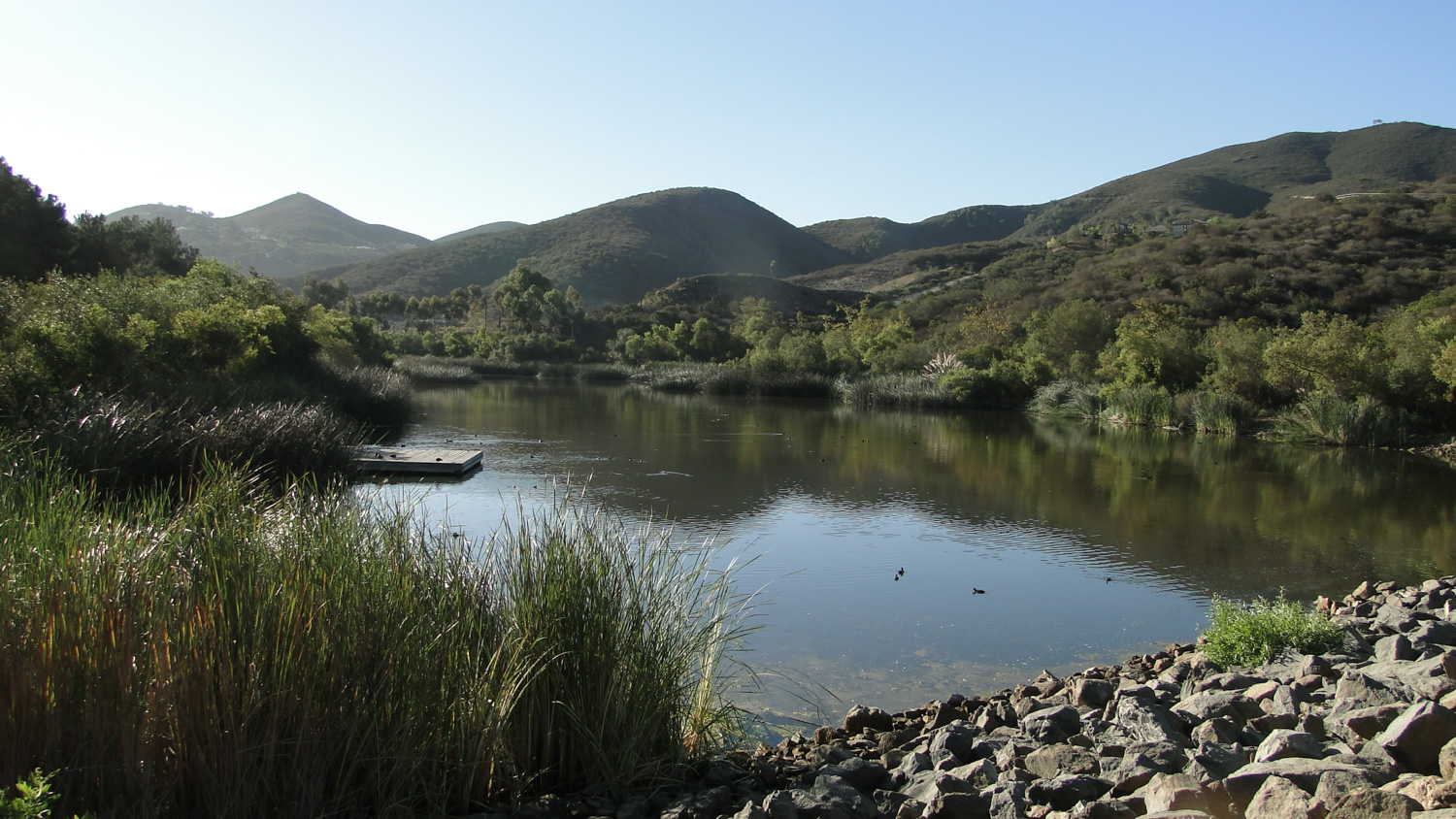 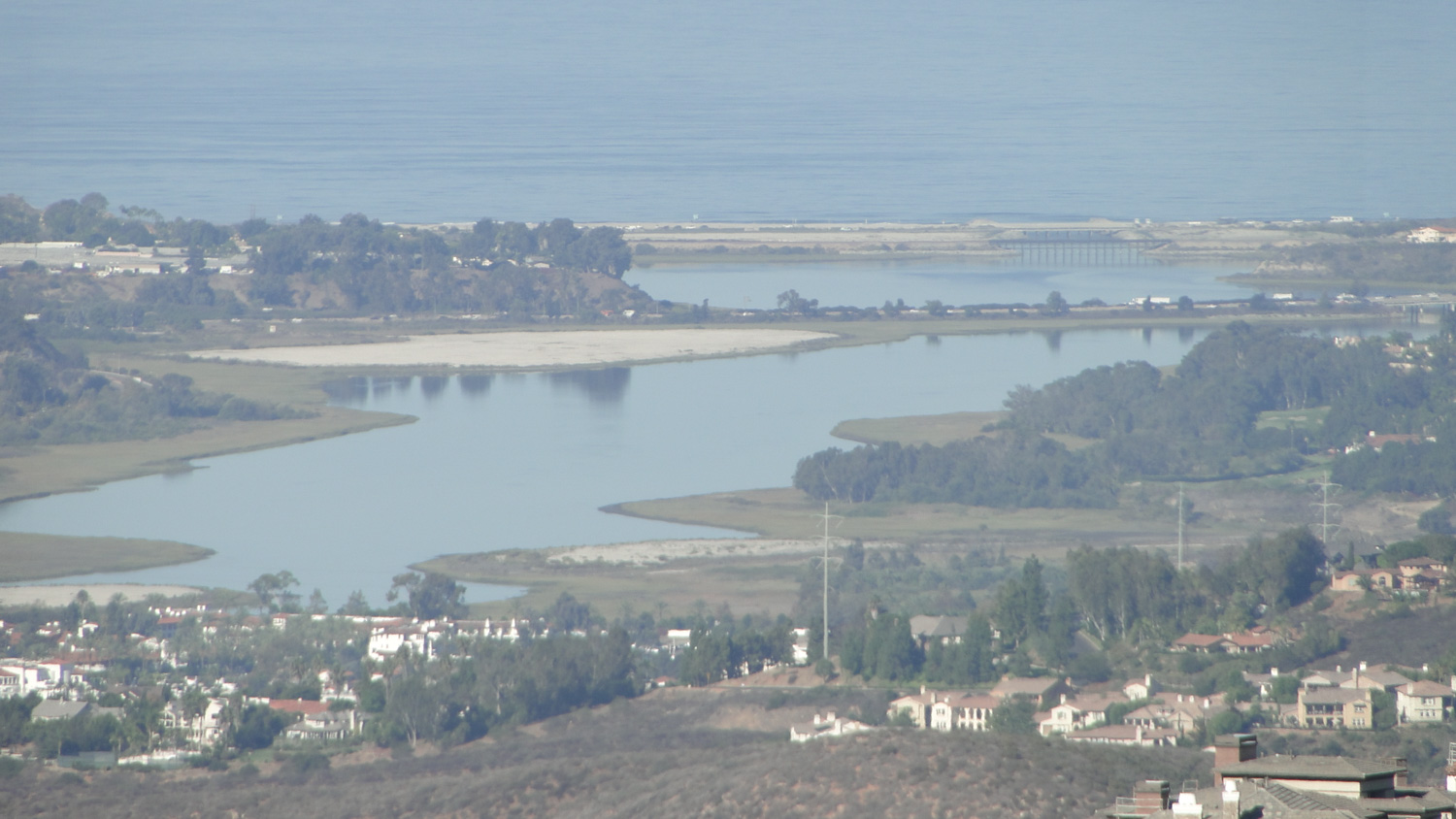 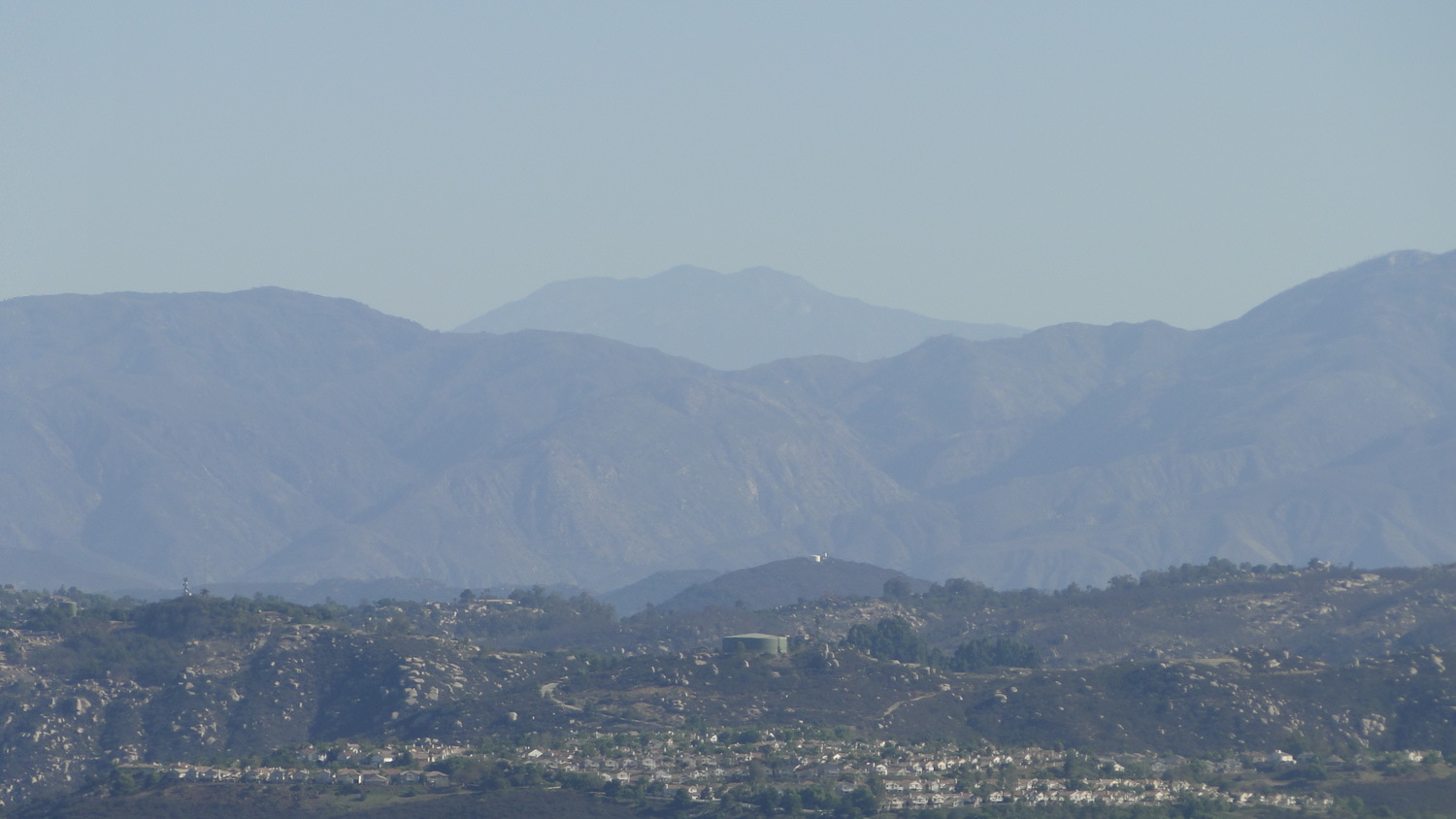 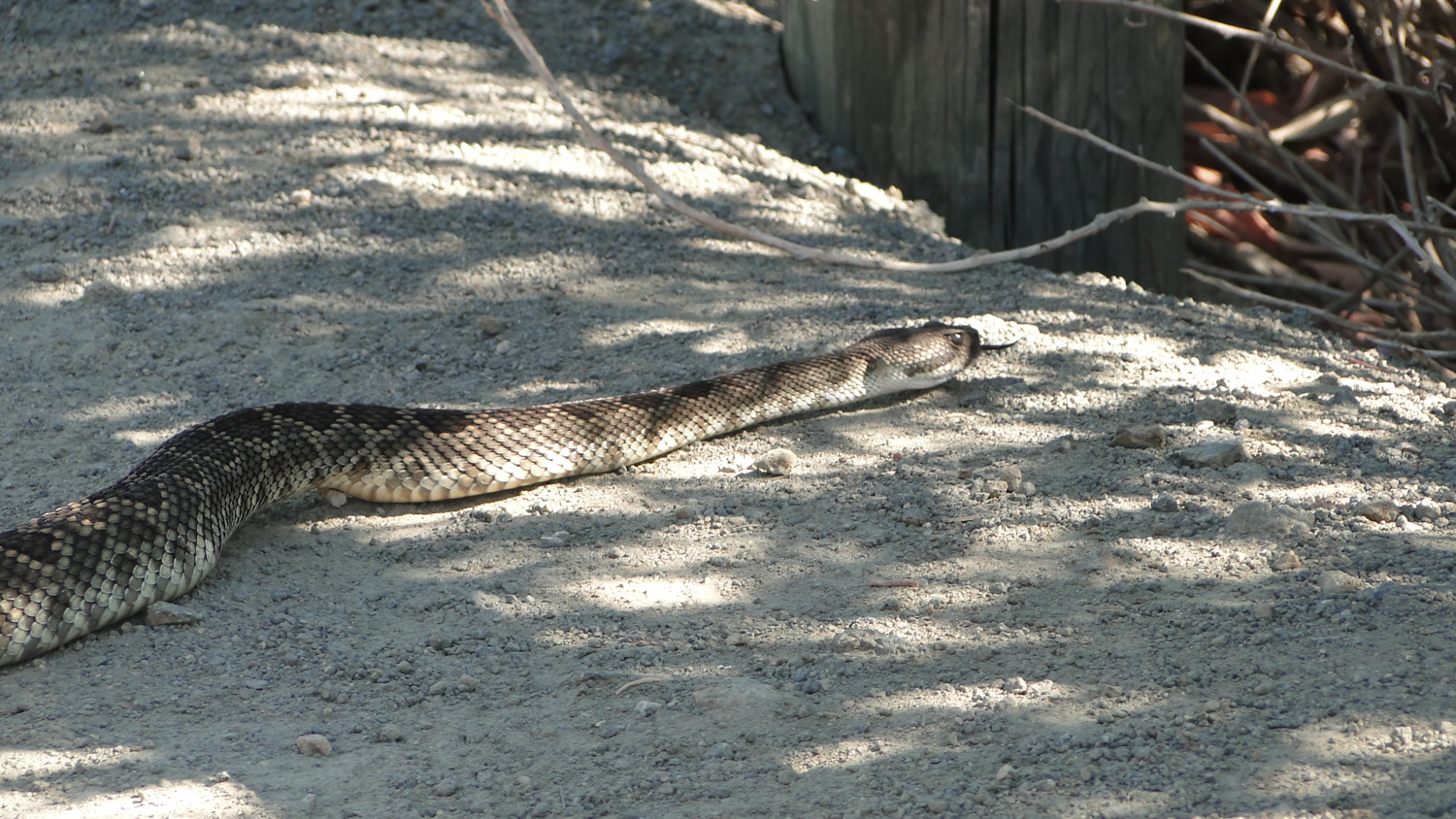 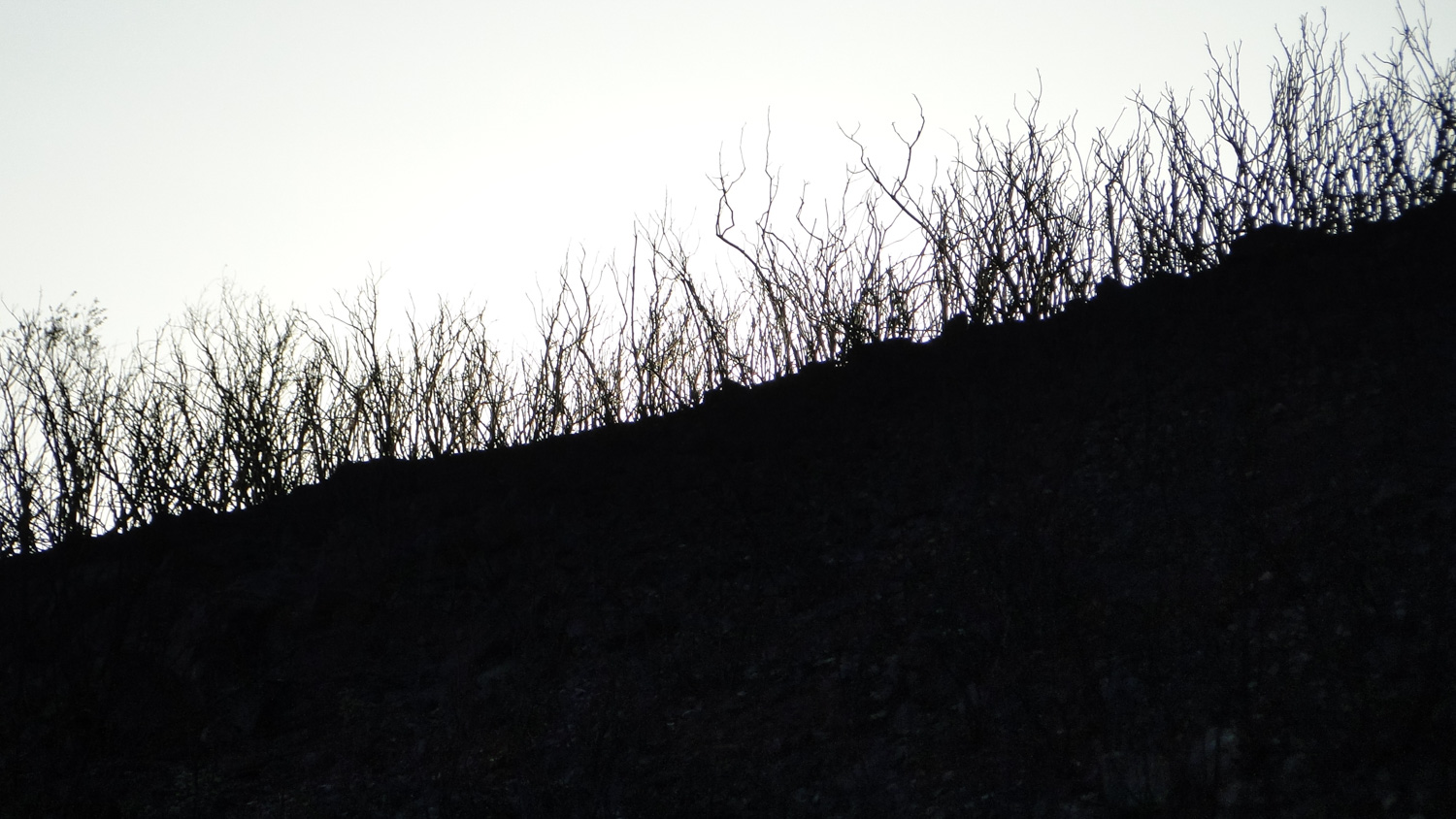 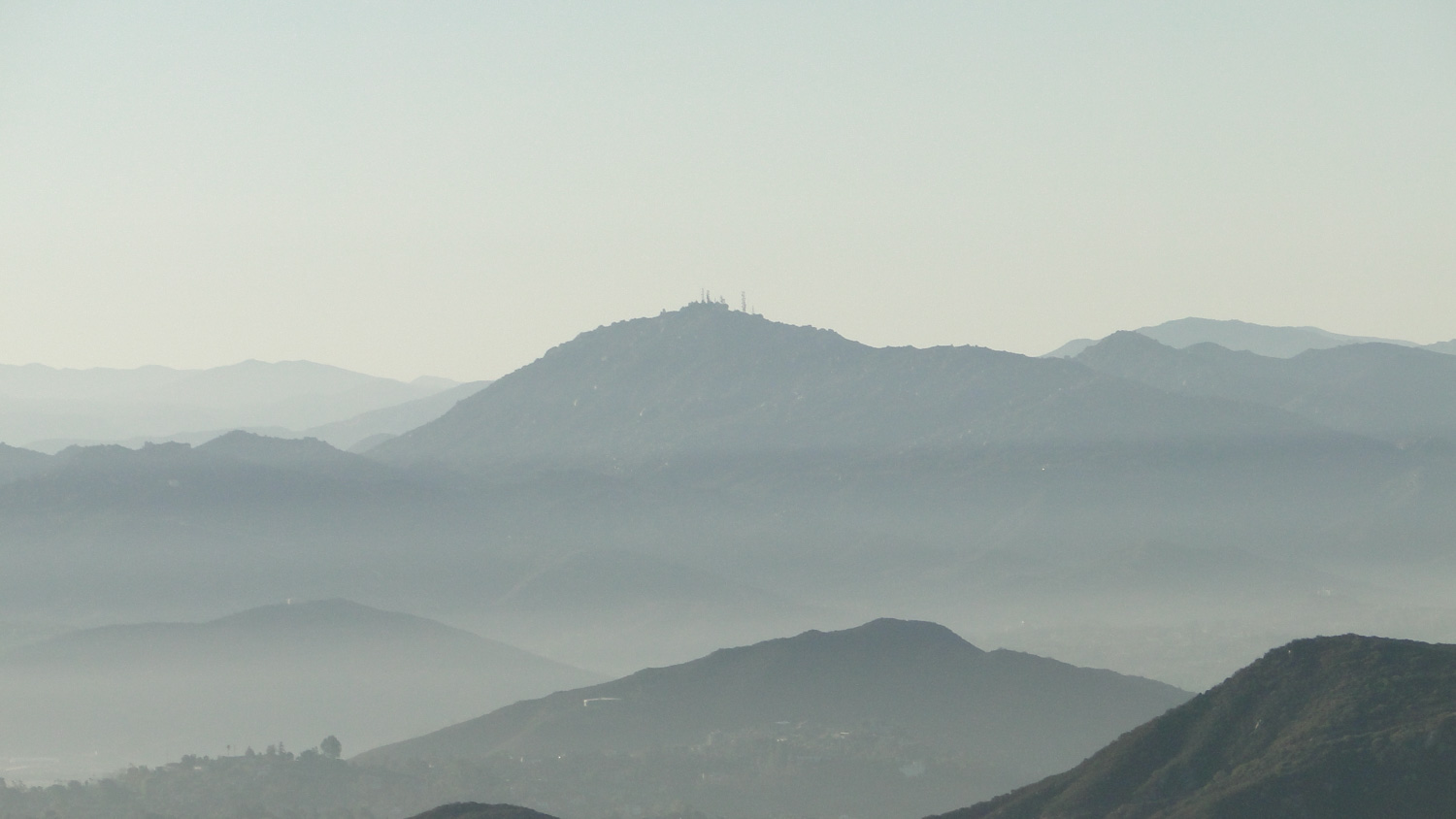 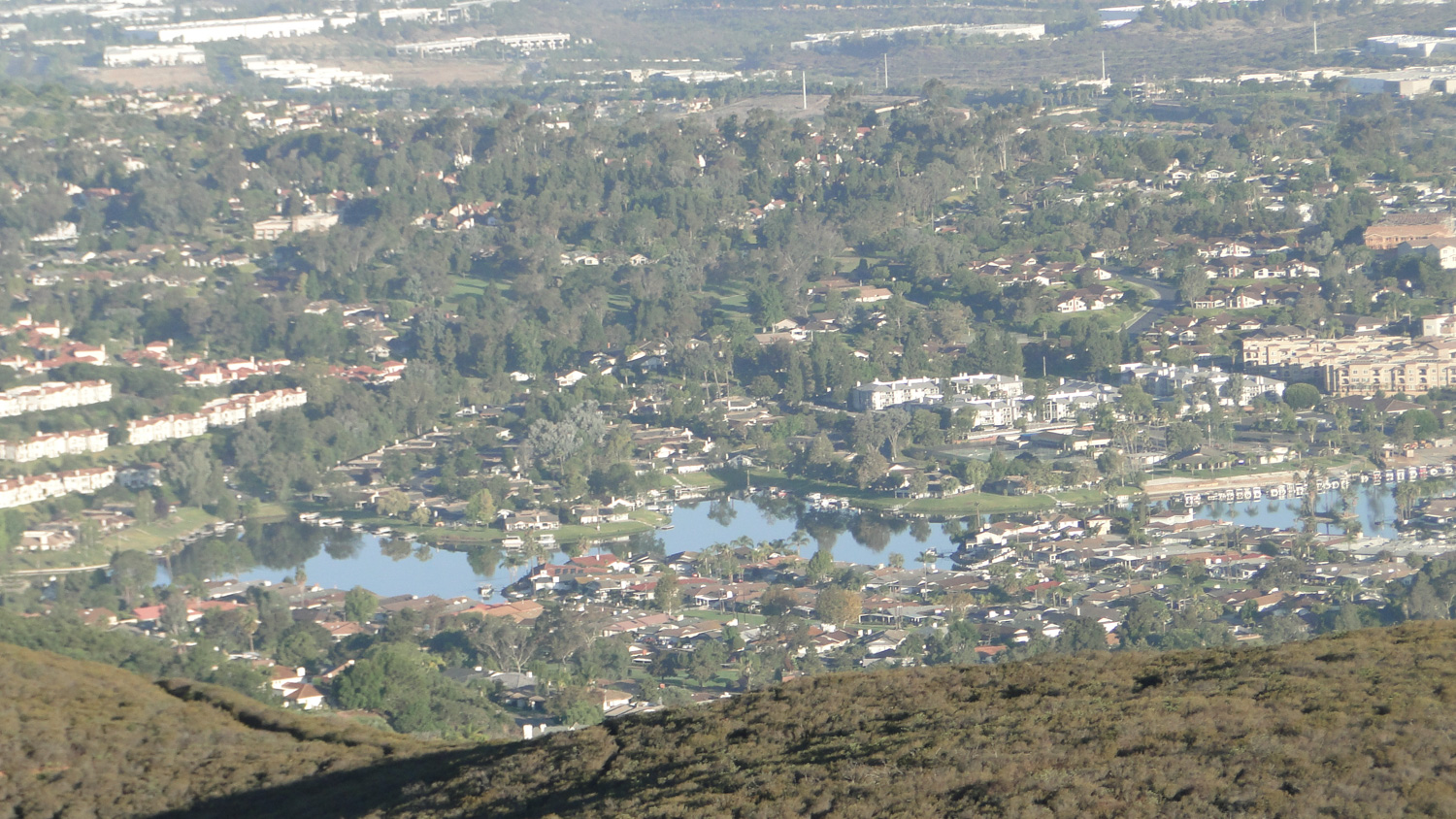 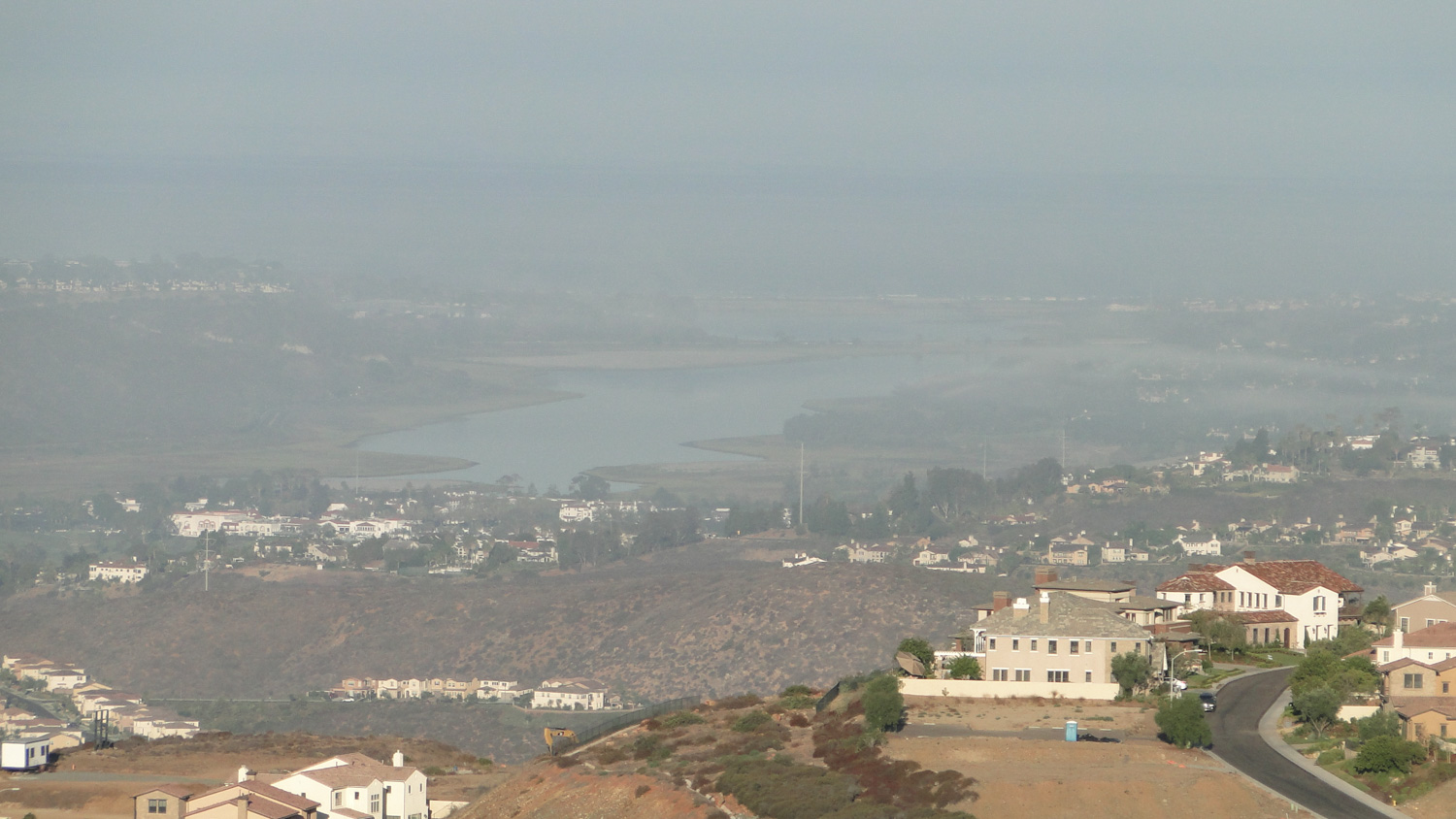 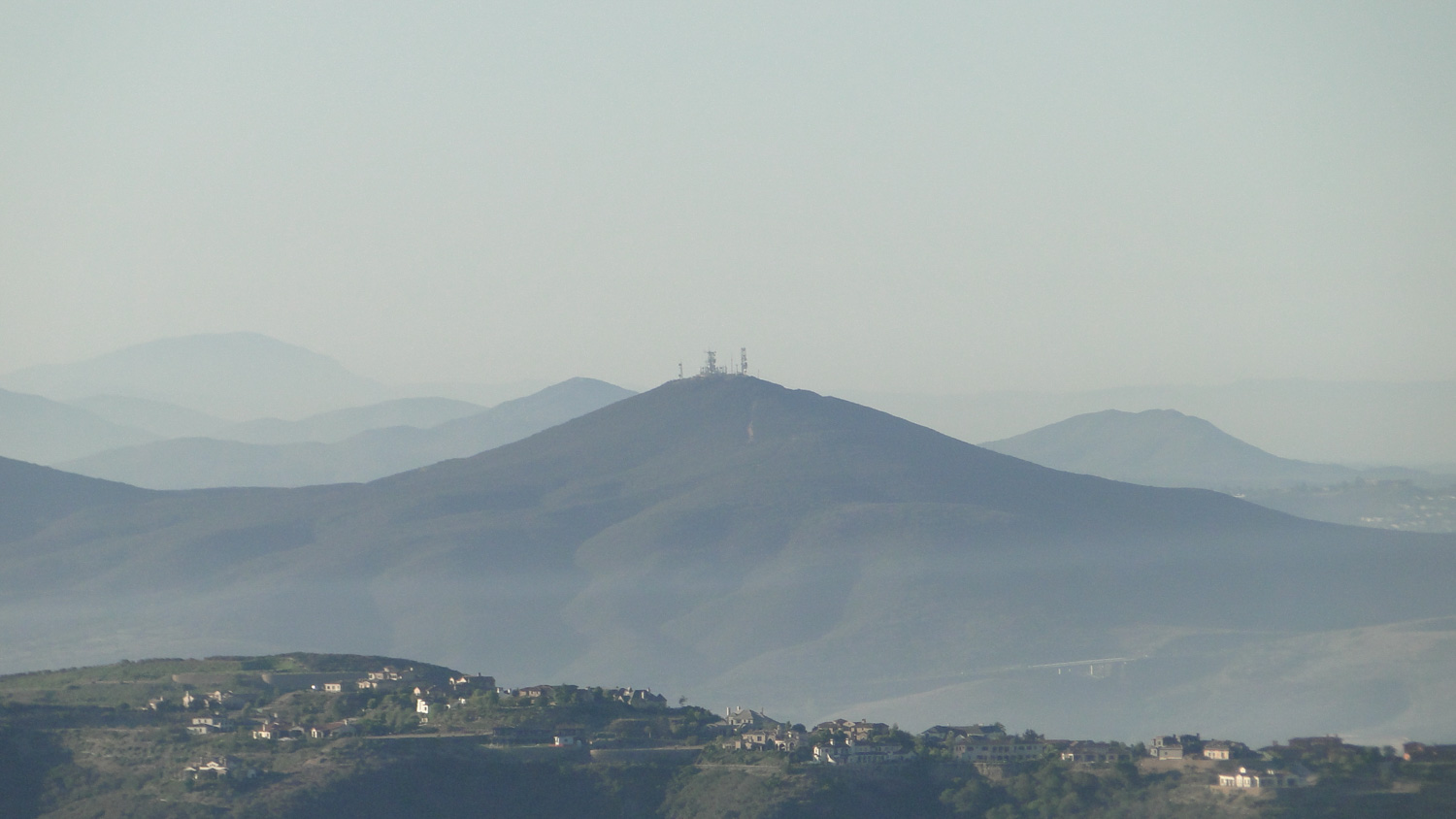 The trail is in good condition

There isn't really any camping adjacent to this spot. The nearest campgrounds would be at Guajome County Park or Carlsbad State Beach. As this trail is most commonly used as a neighborhood trail for folks in North County, I don't suspect that most people would plan to base a camping trip around this hike.

Take Highway 78 to San Marcos Boulevard. If coming from the coast, turn right. If from the 15, turn left. Turn left onto Bent Avenue, which will turn into Craven Road. Turn right onto Foxhall Drive, and then turn right into the Discovery Lake parking lot or park along the street. Transit accessible.