Devil’s Slide and Pedro Point Headlands are two beautiful oceanside parks along the San Mateo coast. Trails travel on the edge of the cliff overlooking a wild shoreline, pelicans, seals, and even whales at the right time of year. Wildflowers in pinks and oranges and yellows grace the breezy slopes. This hike begins at the Devil’s Slide south parking parking lot and tops out at Pedro Summit, with a spectacular 360 degree vista of bluffs, mountains, beaches, and the Golden Gate Bridge on a clear day. 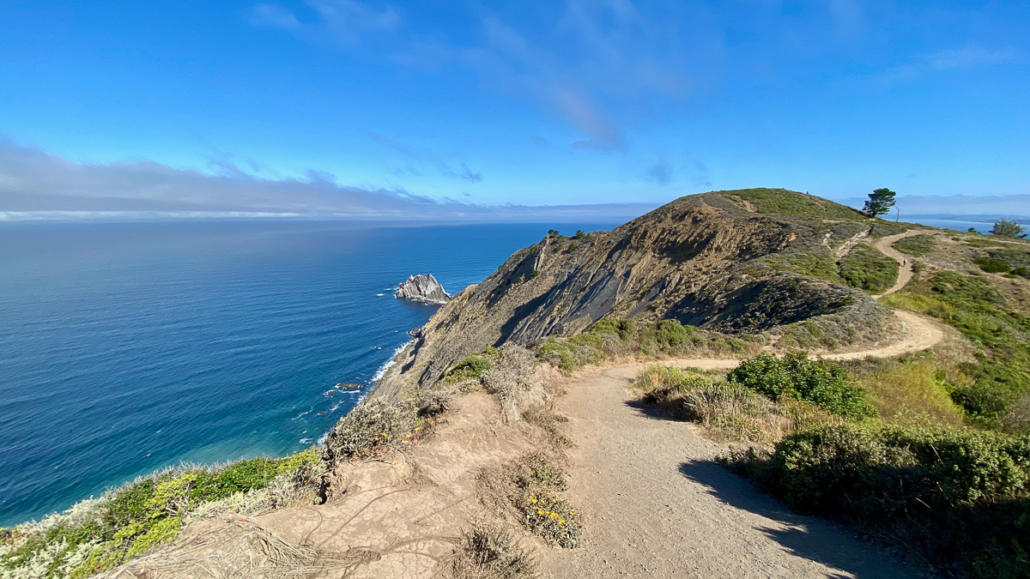 Ever since Highway 1 was built in 1937, the portion of it along Devil’s Slide had been prone to landslides that cut off communities and caused lengthy work-around commutes between Pacifica and Montara. After years of wrestling with CalTrans’ plans to build an inland highway over the western slopes of Montara Mountain, concerned citizens introduced a ballot initiative called Measure T, asking voters to fund tunnels instead. In November 1996, the measure passed with 74% of the vote. After the tunnels opened in 2013, San Mateo County Parks began converting the now extinct portion of Highway 1 into the multi-use Devil’s Slide Trail. It opened in 2014. 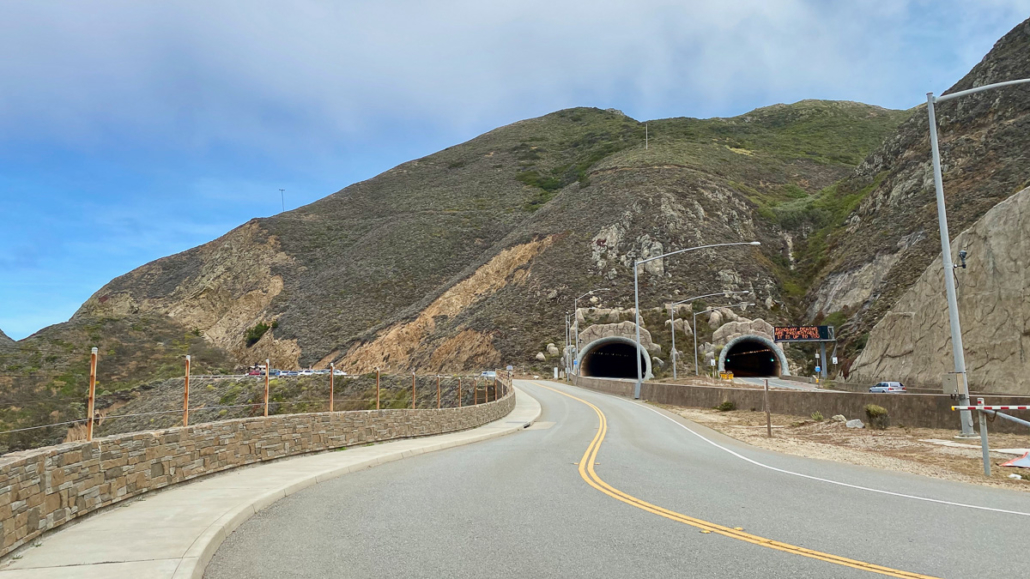 Start your hike heading north on the Devil’s Slide Trail from the south parking lot. Chipped and sheared granitic rock rises sharply beside it, the same that makes up Montara Mountain. To the west, beyond a steep cliff protected by walls and fencing, the Pacific Ocean stretches toward the horizon. Wildflowers —sea daisies, gum plants, and poppies—dance above the cool, swirling currents. Harbor seals and elephant seals hang out on the rocks and beaches below, and between late winter and early spring, you may see gray whales migrating north. 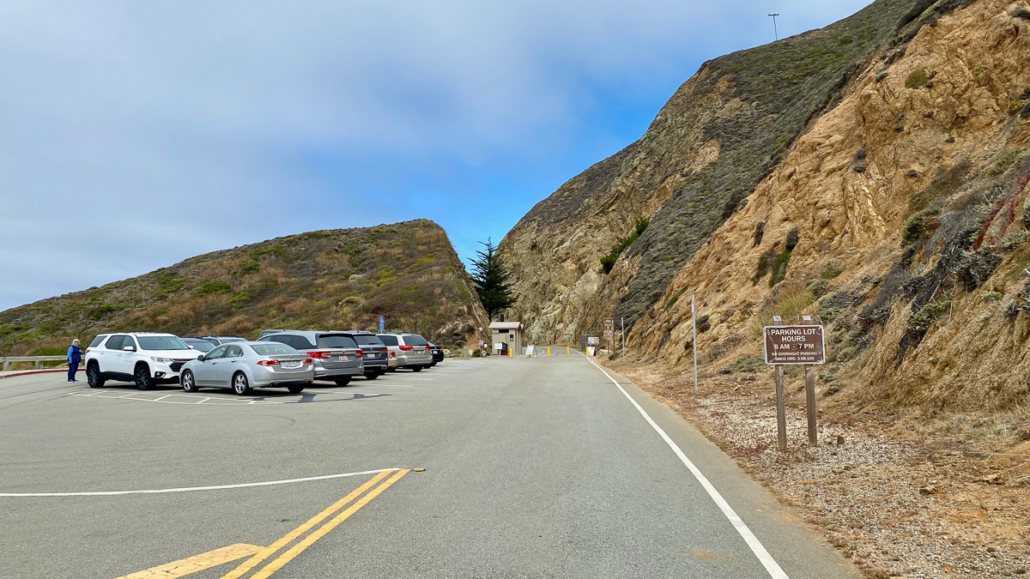 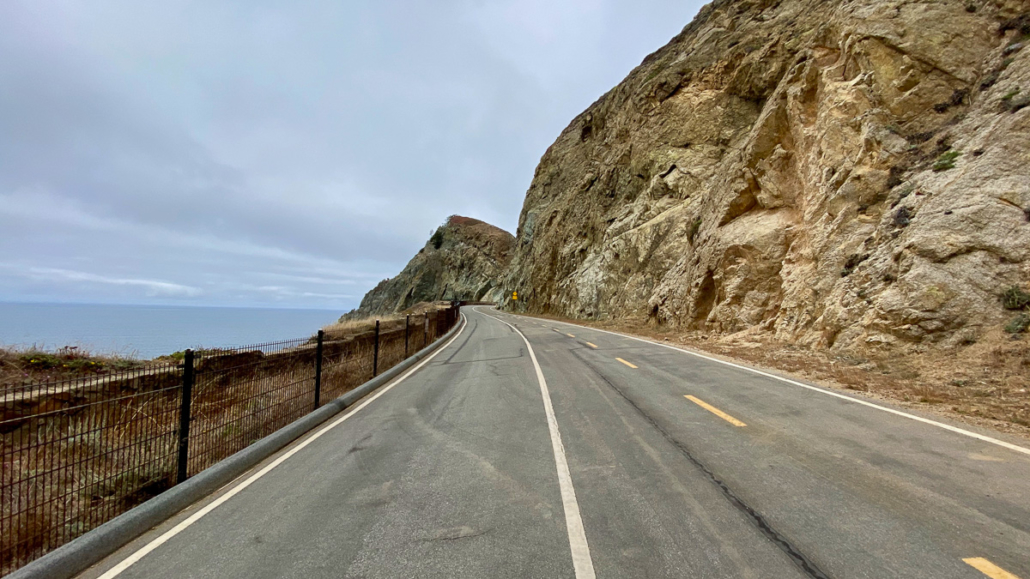 A pedestrian lane on the left and bike lanes on the right, Devil’s Slide Trail

At 0.3 miles is a viewpoint overlooking flat-topped Egg Rock. The rock hosts a colony of common murres, seabirds with black backs and white bellies, but it wasn’t always the case. By the late 1980s, the colony had been wiped out from a combination of man-made and natural events. The community mobilized, and in 1996, scientists began putting dummy murres and mirrors on Egg Rock to encourage repopulation. By 2013, the colony had been resuscitated, and you can see murres out there today. 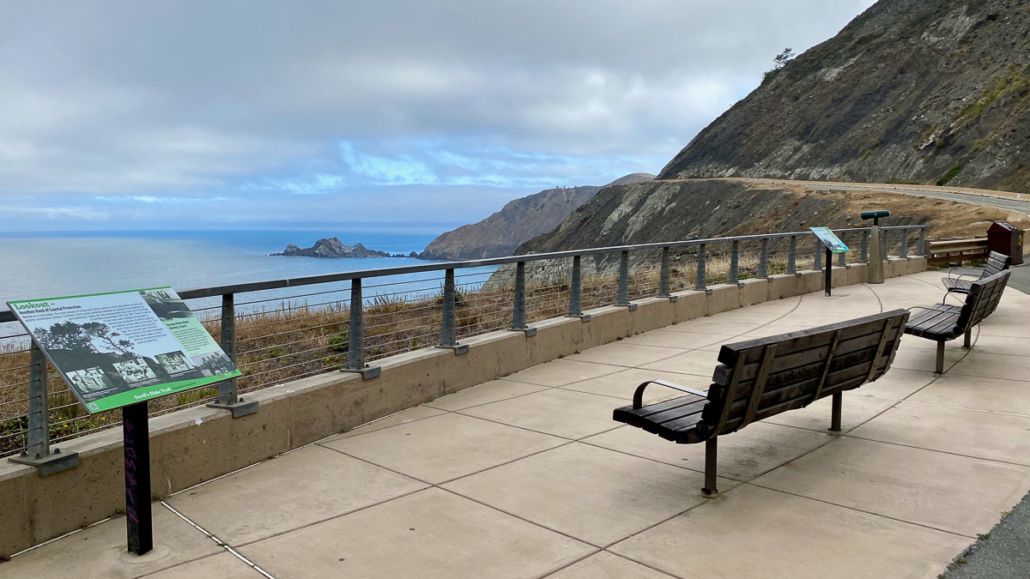 The first of three viewpoints on the Devil’s Slide Trail 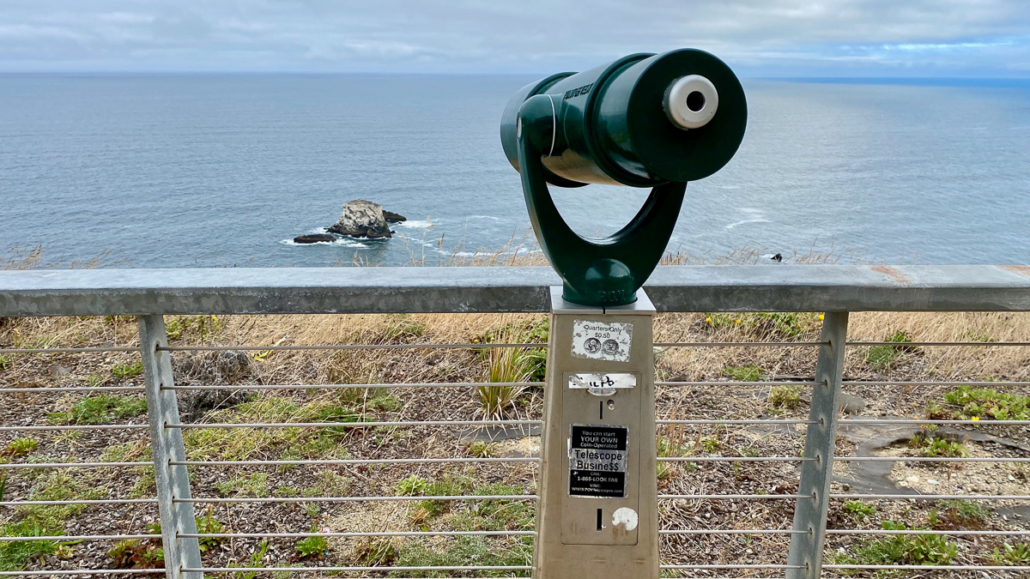 Coastal scrub grasps the bluff as you continue north. San Pedro Rock and the Pedro Point Headlands are visible to the northwest beyond the rough, rocky shoreline. Rock layers that look like stripes signal a transition from granitic rock to sedimentary rock, made up of shale and sandstone from the ocean floor. 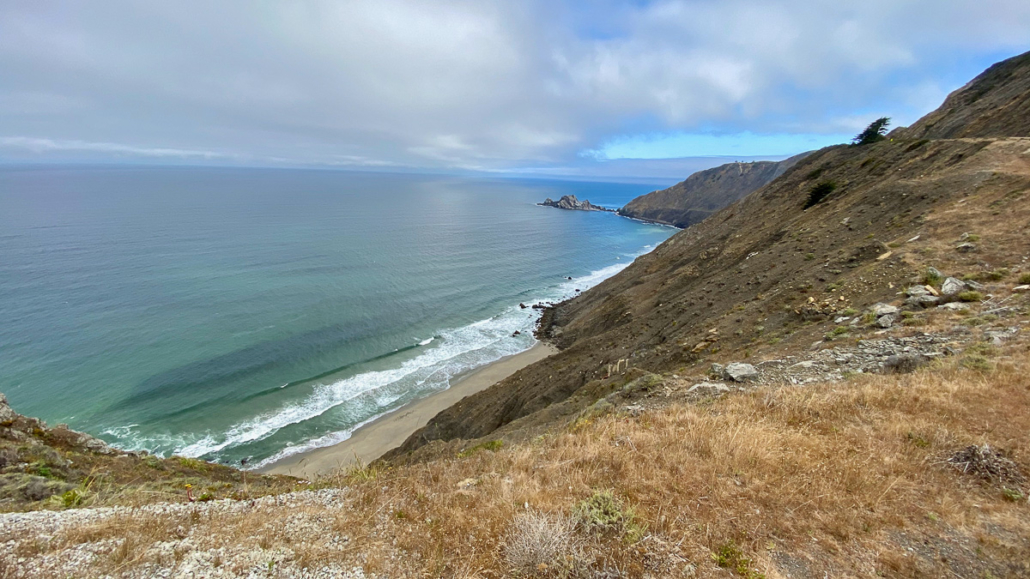 San Pedro Rock and the Pedro Point Headlands to the northwest 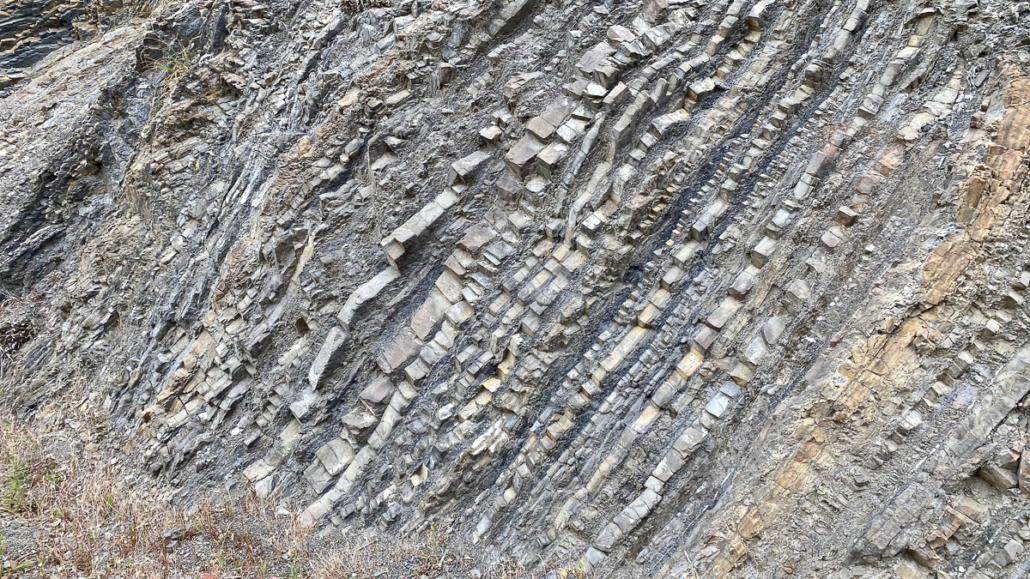 The trail crests to a northern viewpoint, then descends to the north trailhead. Montara Mountain comes into view as well as the Tom Lantos Tunnels. Born in Hungary, Lantos was a U.S. Congressman who helped secure federal funds to get the tunnels built. When he passed away in 2008, the tunnels were renamed in his honor. 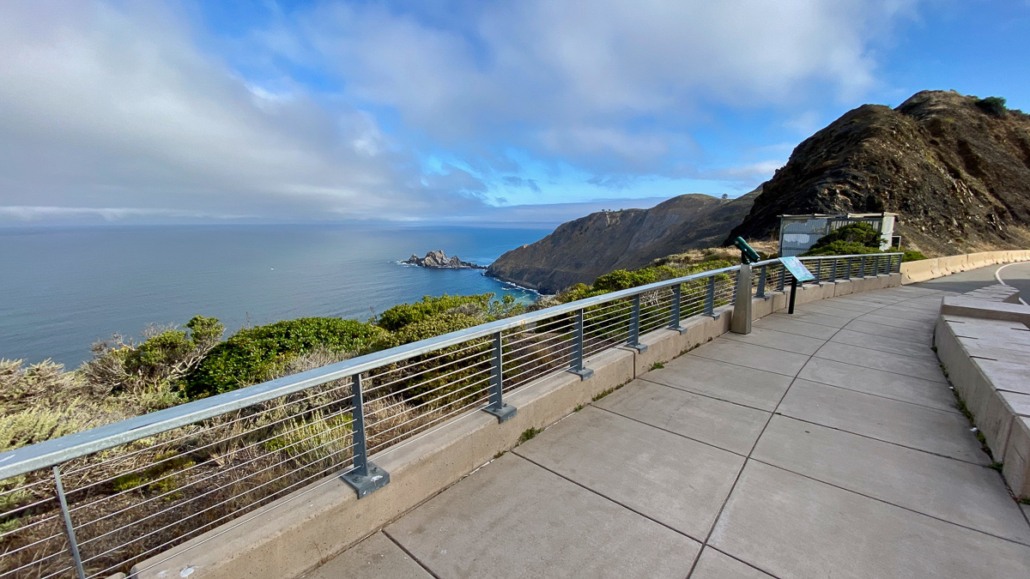 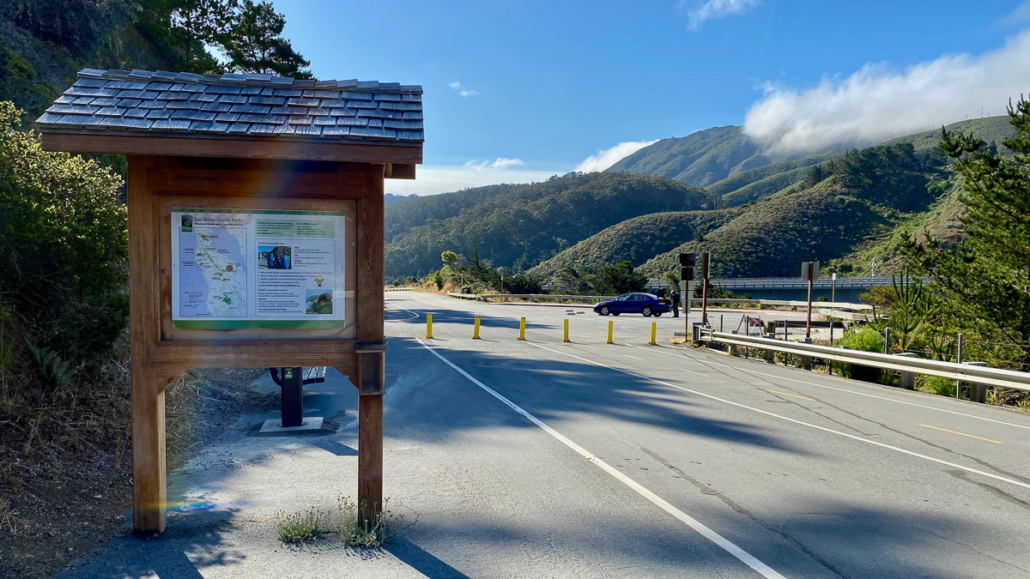 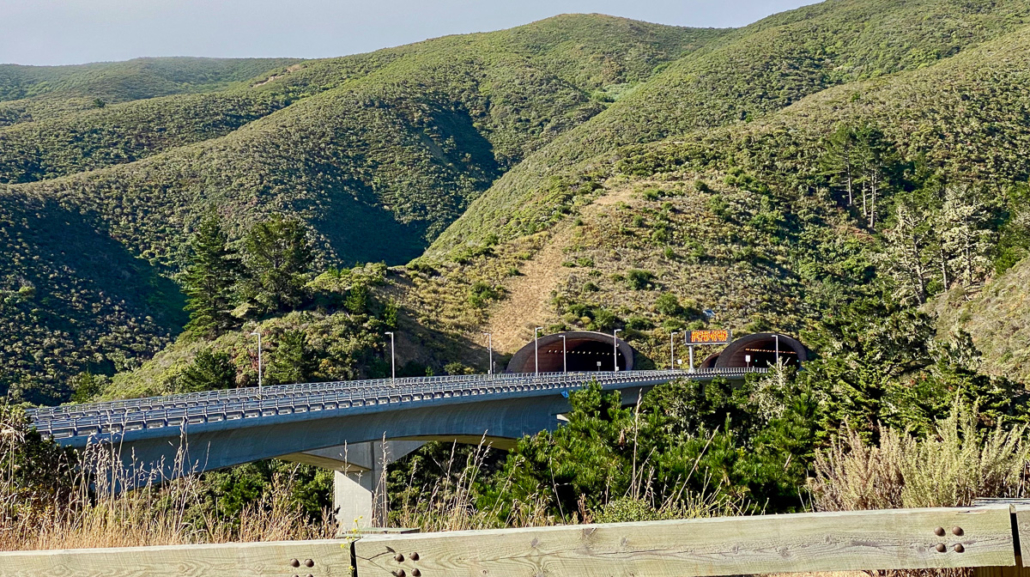 Pass the northern parking lot for the Devil’s Slide Trail at 1.3 miles, hugging the road’s shoulder. Please take care here—the shoulder is narrow and as of this writing, there is not an official pedestrian trail along this short, 0.1-mile stretch. 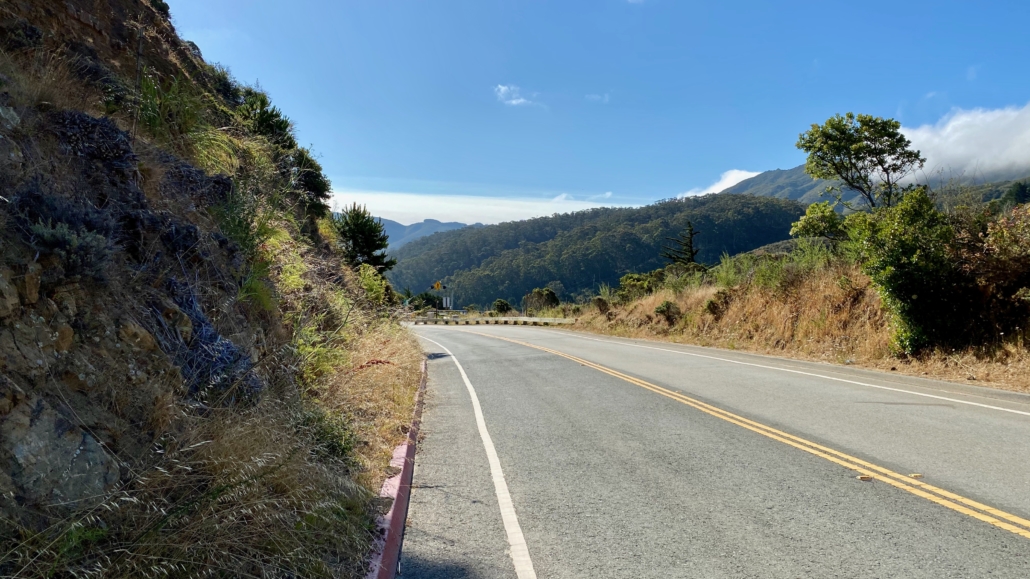 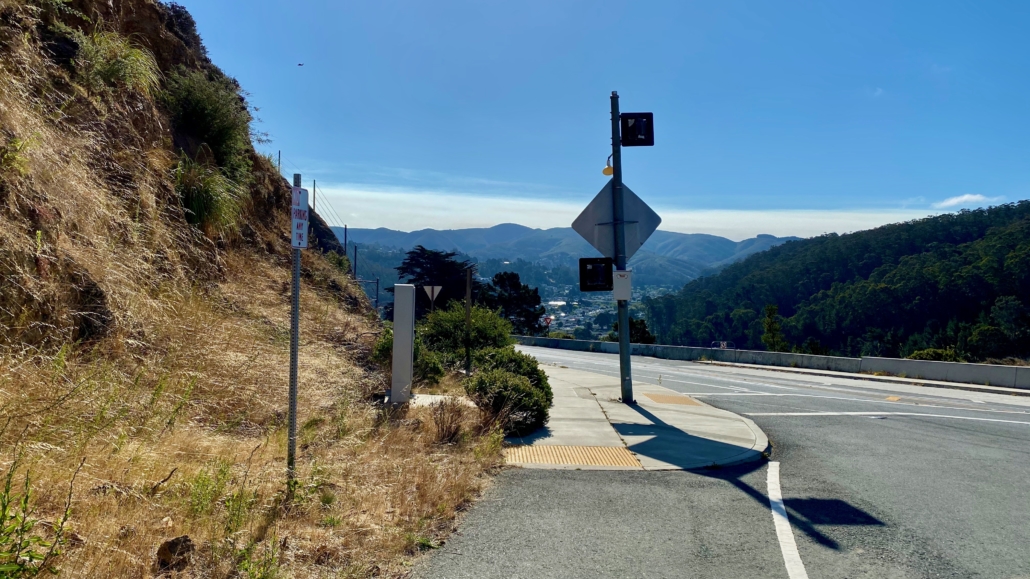 Merge onto the paved connector trail to Pedro Point Headlands, and enter what feels like another world. The headlands are windy, rugged, and grassy, with occasional stands of Monterey pine and eucalyptus trees. Moderately wide dirt trails rise and fall like waves. 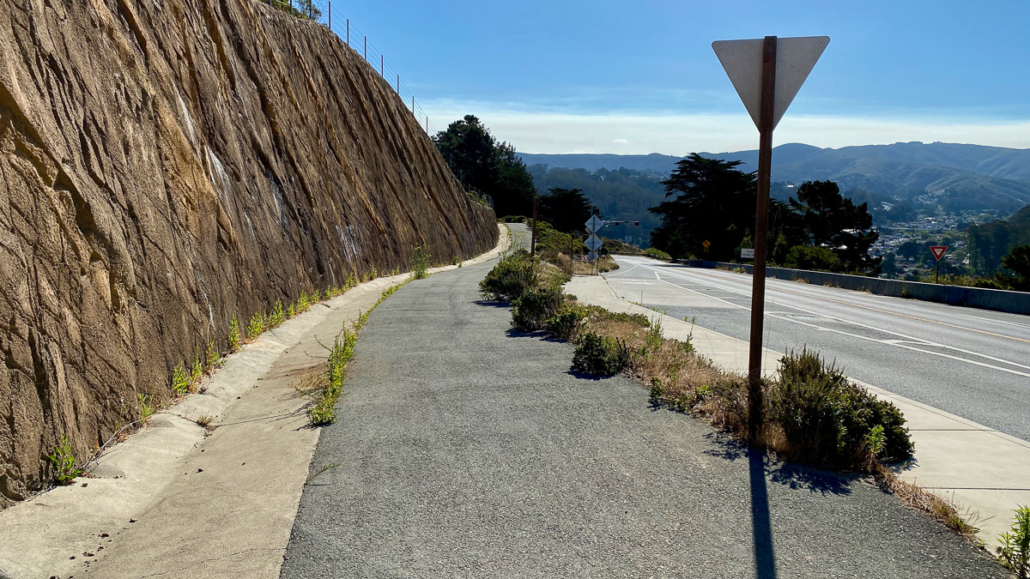 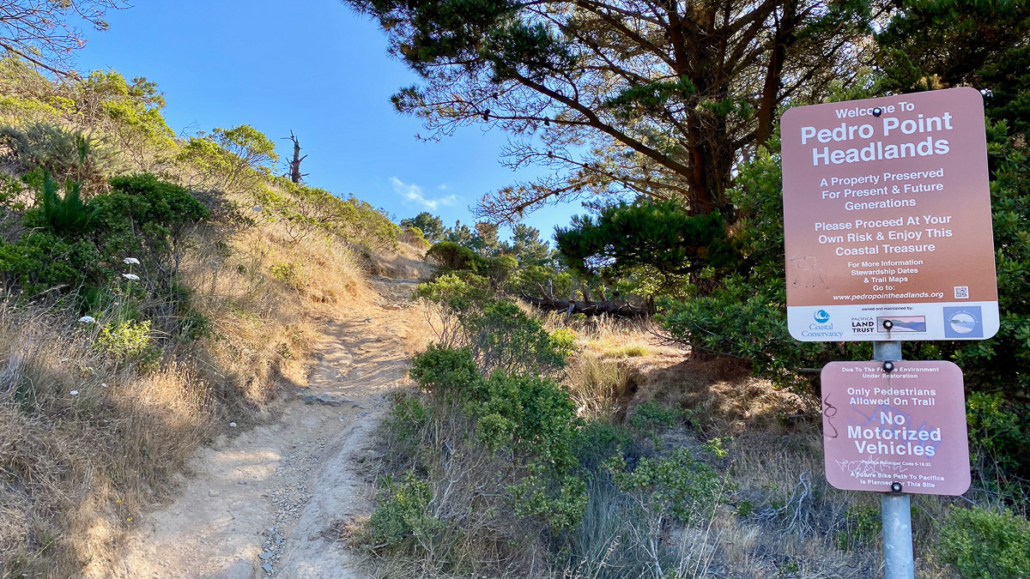 Turn left onto the South Ridge Trail, gaining a steep 350 feet over the next half mile. 180° views stretch from Linda Mar to San Pedro Mountain. Songbirds dart through Monterey pine trees. At the top of the ridge, you can see Pacifica State Beach and the peninsula’s northwestern coast. 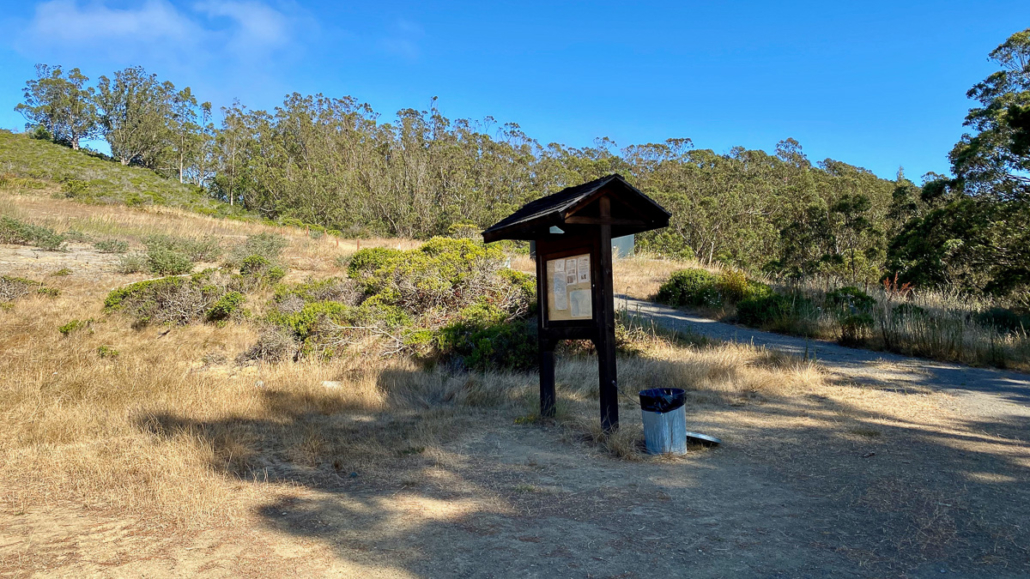 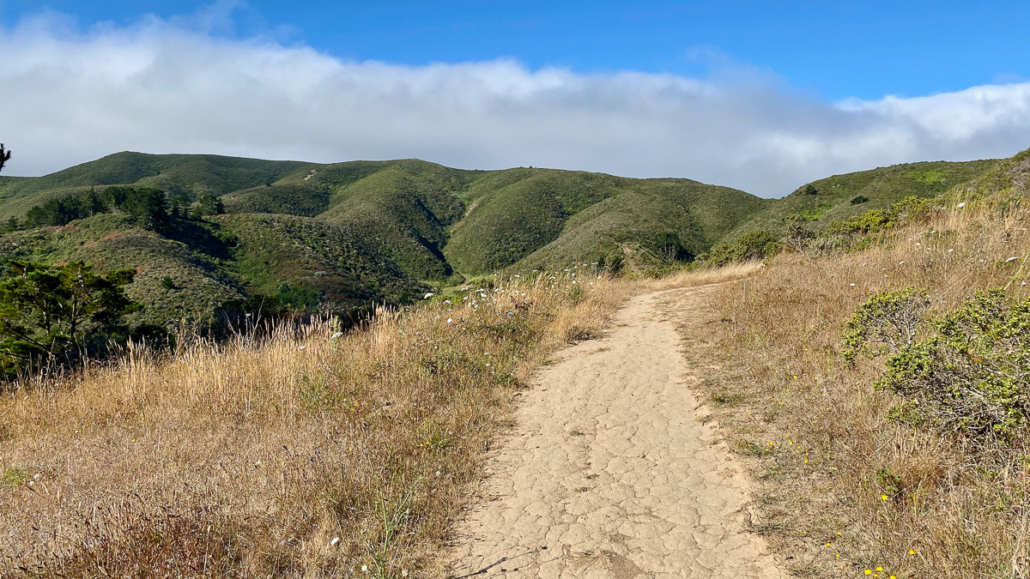 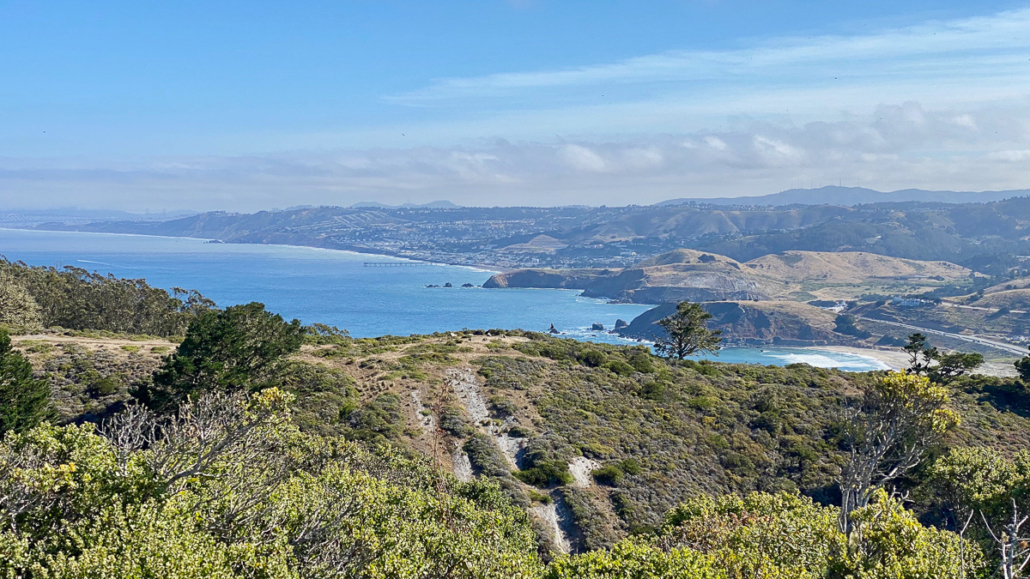 At 2.3 miles, pass a signed junction with the Arroyo Trail. We’ll return here after Pedro Summit to make a loop. Past this junction, the South Ridge Trail turns into the Bluff Trail. 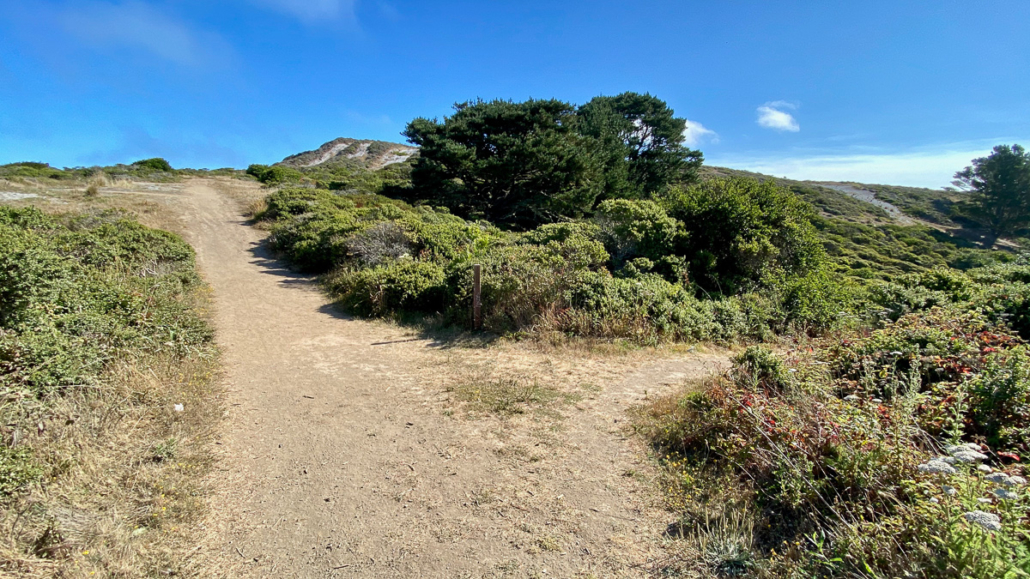 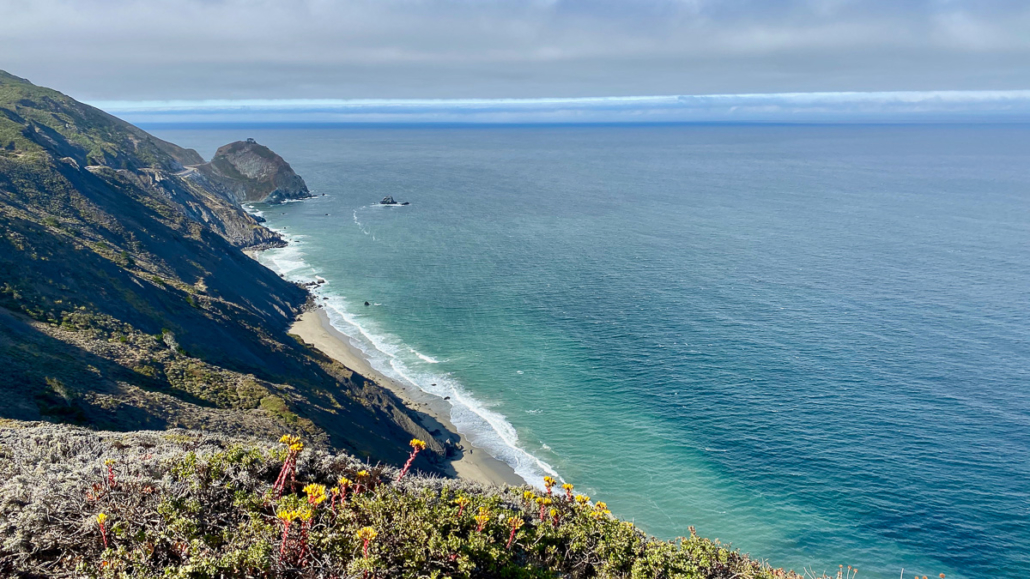 Devil’s Slide Trail and Egg Rock to the south

The trail descends steeply, then climbs to Pedro Summit at 2.7 miles, the highest point in the Pedro Point Headlands. On a clear day, you can see the Golden Gate Bridge and Mount Tamalpais to the north. To the south, bluffs tumble dramatically to the rocky shoreline below. To the west is an endless ocean. 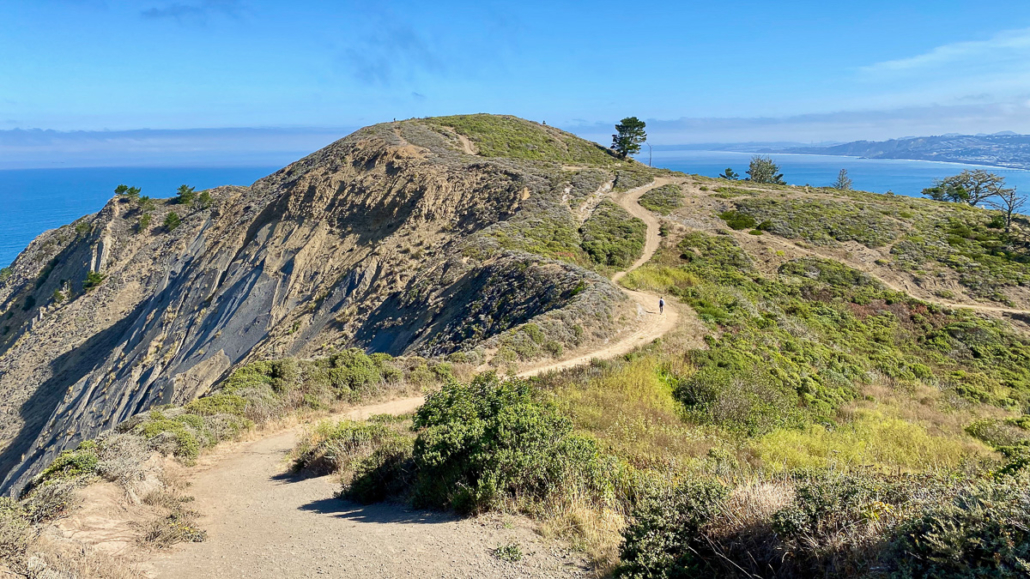 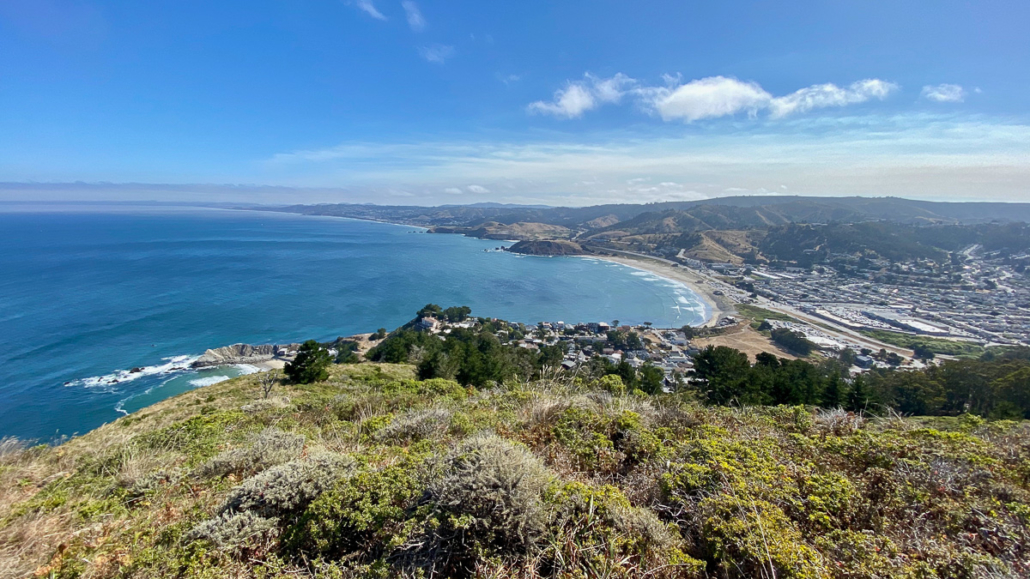 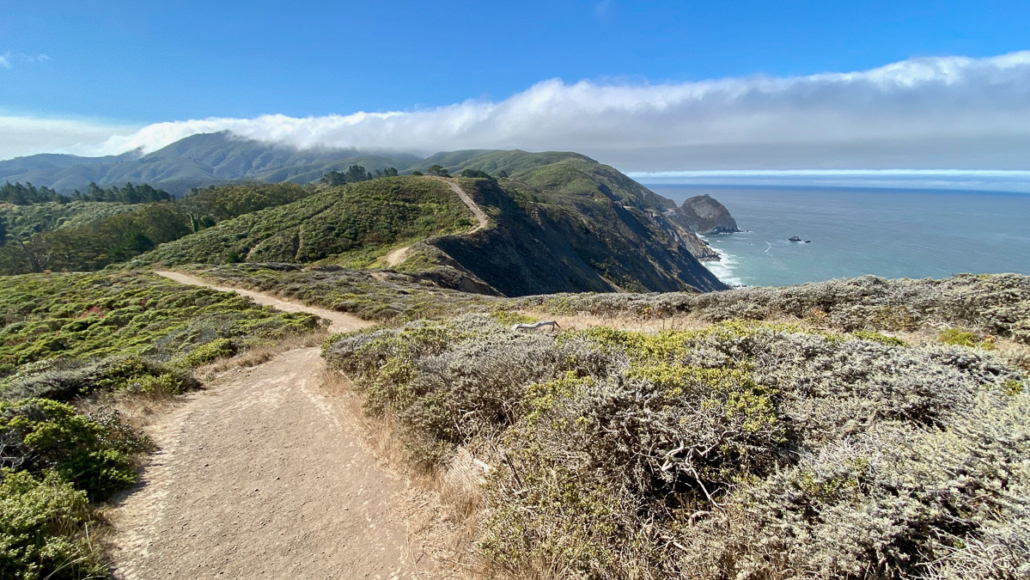 Montara Mountain to the southeast

Retrace your steps to the Arroyo Trail at 3.1 miles. Turn left, descending into a rainforest-like setting alive with birds, eucalyptus trees, and ferns. At the bottom of the trail, bear right towards the Highway 1 Trailhead. 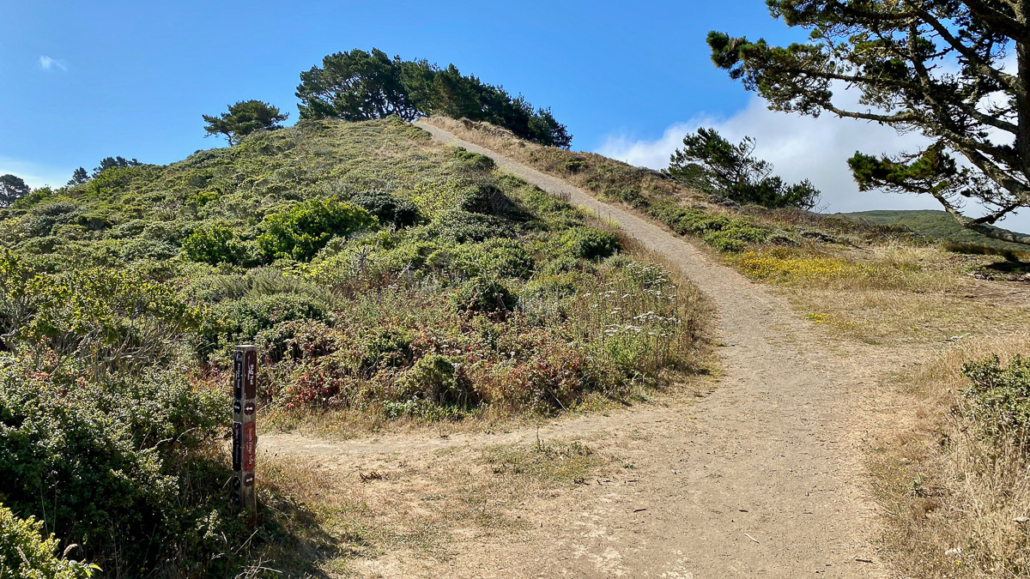 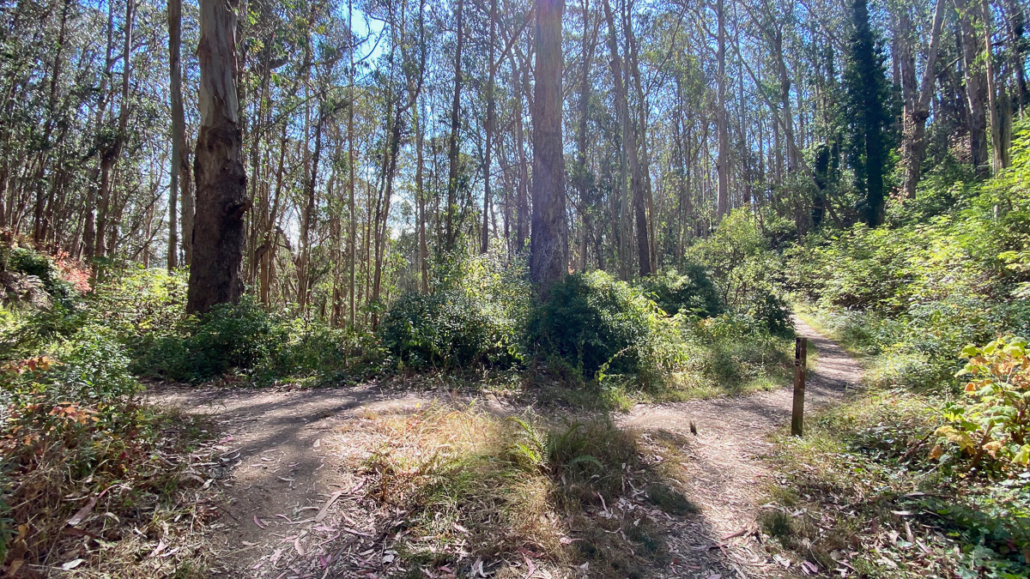 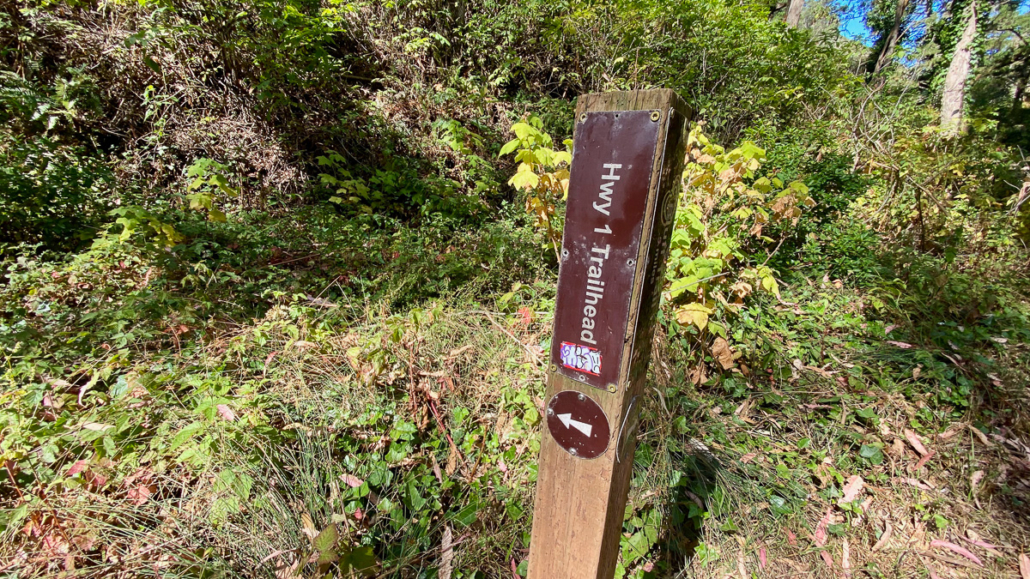 Retrace your steps to the Devil’s Slide Trail and south parking lot. 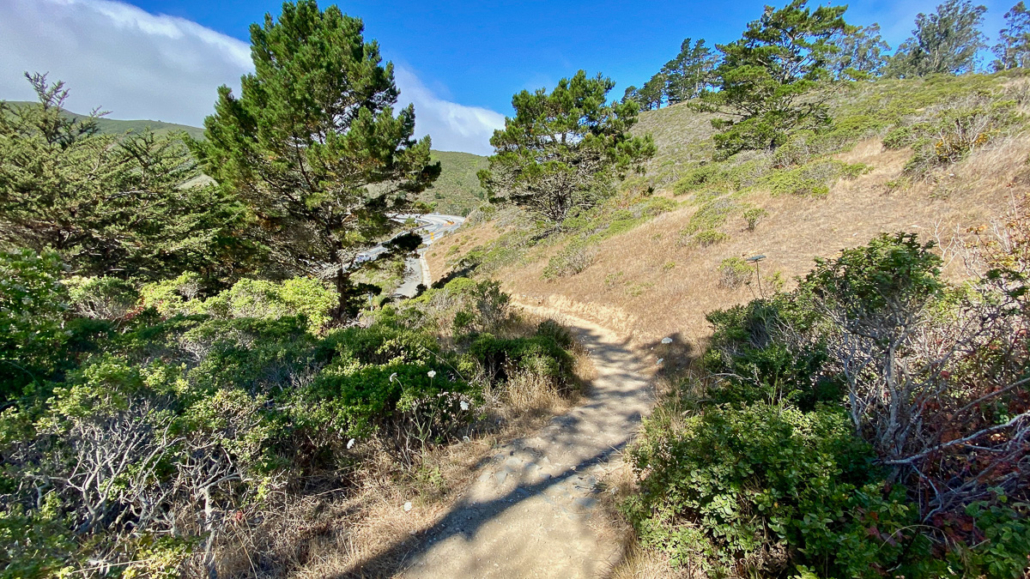 Devil’s Slide is a paved, multi-use trail open to pedestrians, cyclists, and equestrians. It’s sunny and windy. The trail gradually gains elevation from south to north and connects to the Pedro Point Headlands. The Headlands have moderately wide dirt trails, some angular and steep. Trails are mostly sunny, and the Arroyo Trail is partly shady.

From San Francisco, drive south on Highway 1 towards Pacifica. Pass through the Tom Lantos tunnels and then turn right into the south parking lot.