The Castle Rock Loop gets you up high, nearly 3,000 feet above sea level, on Castle Ridge in Castle Rock State Park. Just 10 miles southwest of Saratoga, this hike swims in adventure, with sandstone outcrops, Castle Rock Falls, and river valley vistas in the Santa Cruz Mountains. This description takes the loop clockwise to see Castle Rock Falls and outstanding views on the Saratoga Gap Trail early in the hike. If there is a lot of fog, you may want to do the loop counterclockwise to kill some time and give the fog a chance to lift for the views on the Saratoga Gap Trail. 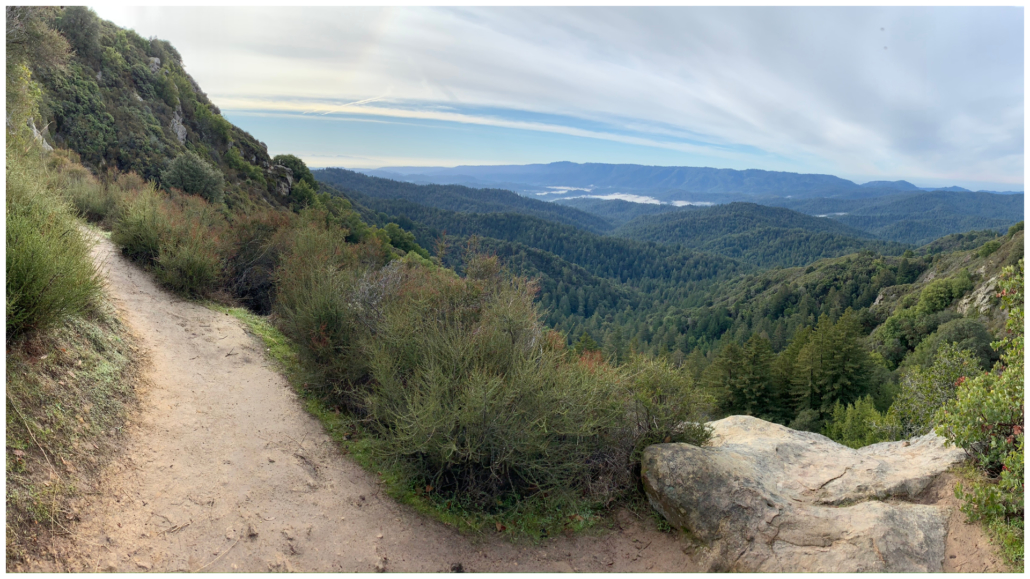 View of the Santa Cruz Mountains from the Saratoga Gap Trail 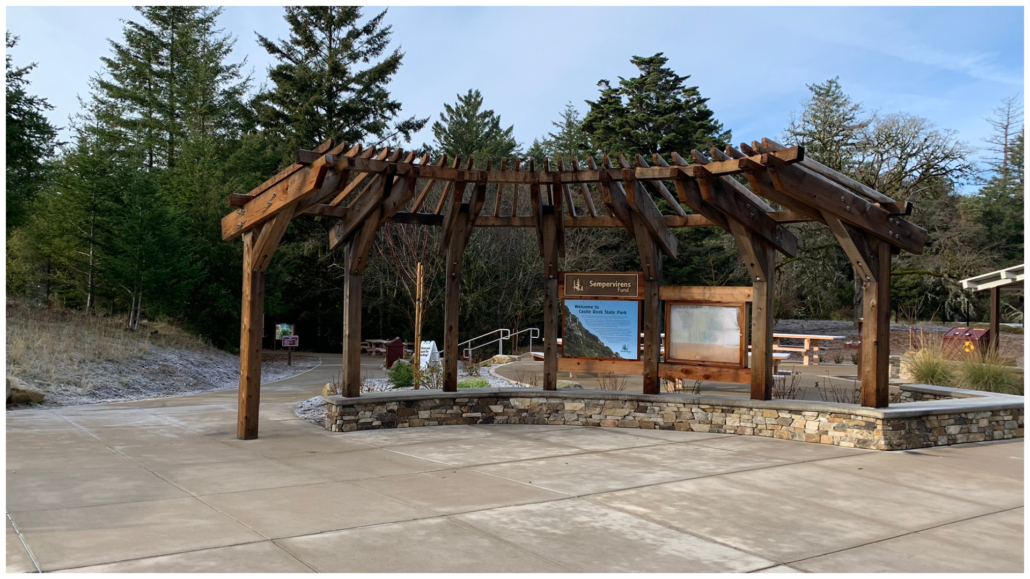 Head towards the wooden pergola and follow signs for the Waterfall Connector Trail. Pick up the signed trail,  descending southwest into madrone, tanoak, and Douglas fir. The partly shady dirt single track is clear and well maintained. This is an inverse hike, meaning you will descend for roughly the first half of the hike and then climb up on your return. 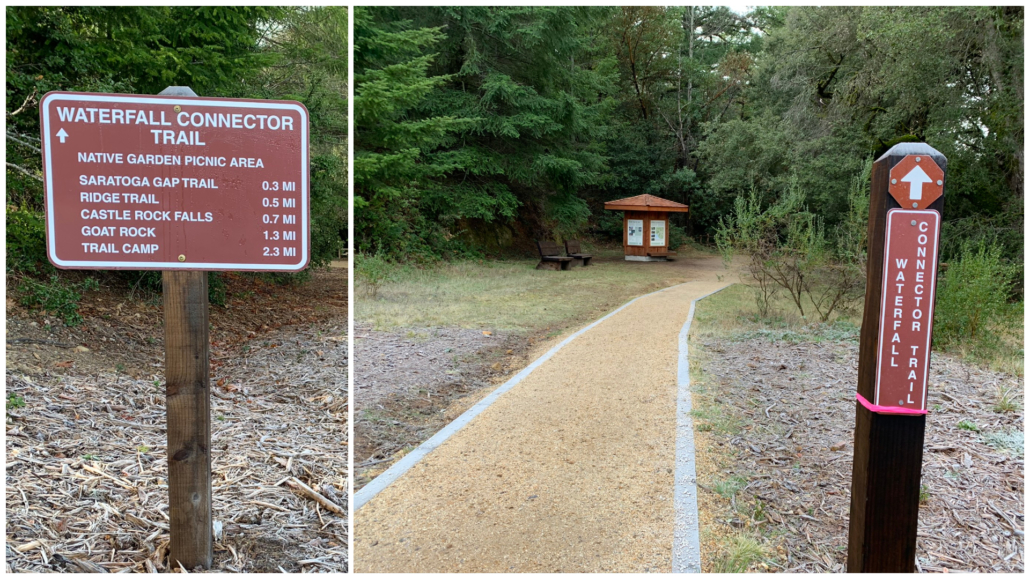 After a short stint on the Waterfall Connector Trail, cross over a wooden pedestrian bridge. Then, turn right onto the Saratoga Gap Trail. On your left, the Saratoga Gap Trail leads to Castle Rock, an optional 1.75-mile loop that adds about an hour to your hike. I would skip it for now and add it on to the end of your hike if you have extra energy. Turning right towards Castle Rock Falls, descend past huge, mossy boulders. Green ferns flank the slightly wider dirt trail, following the edge of a forested ravine with sounds of a trickling creek below and tapping acorn woodpeckers above. 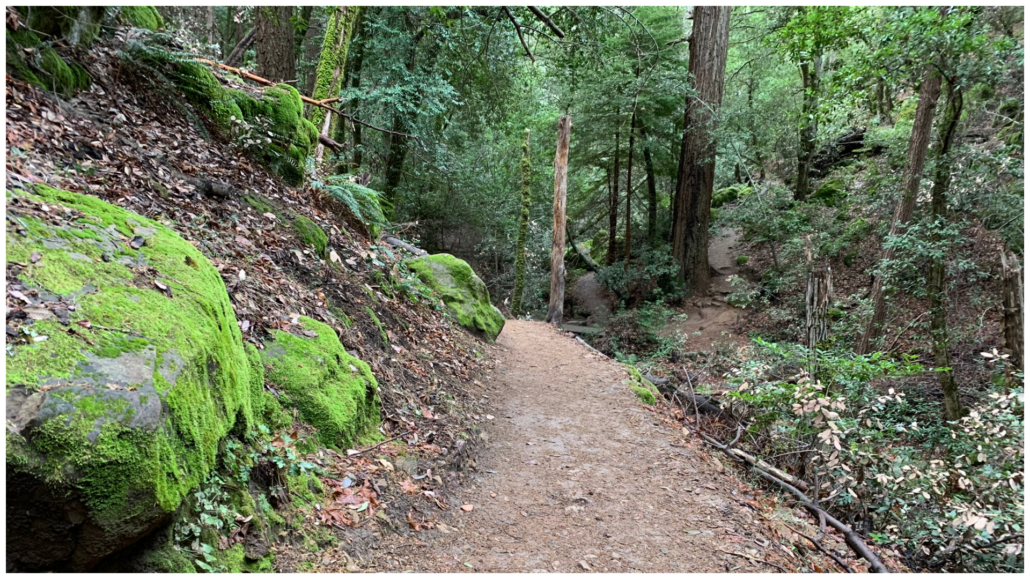 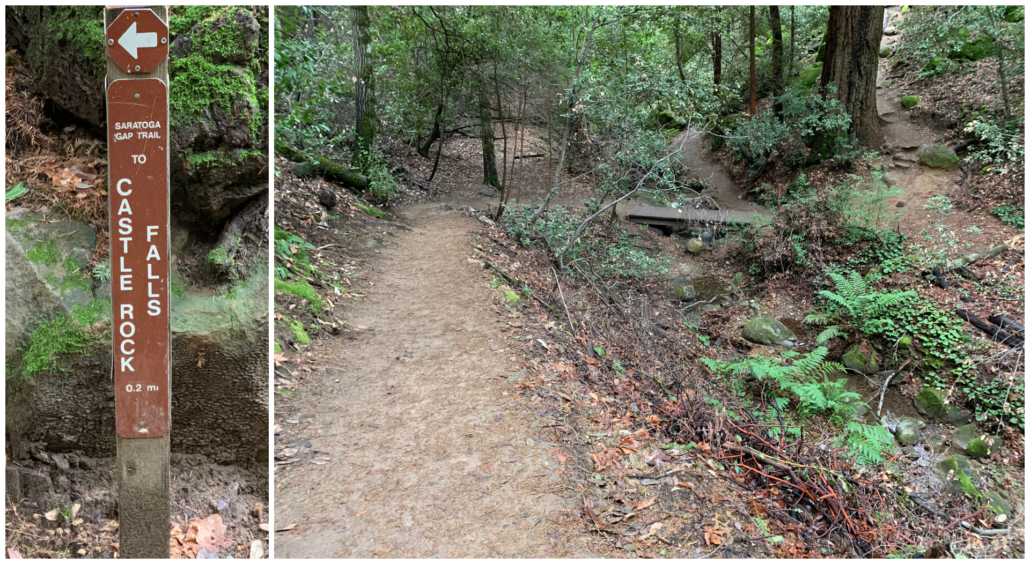 Now on the opposite side of the creek, hike past a series of Native American grindstones. At 0.6 miles, reach the Castle Rock Falls observation deck. Down to the left, you have a top-down view of the crest of Castle Rock Falls. The falls can dry out to just a trickle outside the rainy season, so you may want to wait for heavy rains in late winter or early spring to see the waterfall flowing well. To the southwest is a pretty view of the forest and ridges of the Santa Cruz Mountains. Bigger, sweeping views are yet to come. 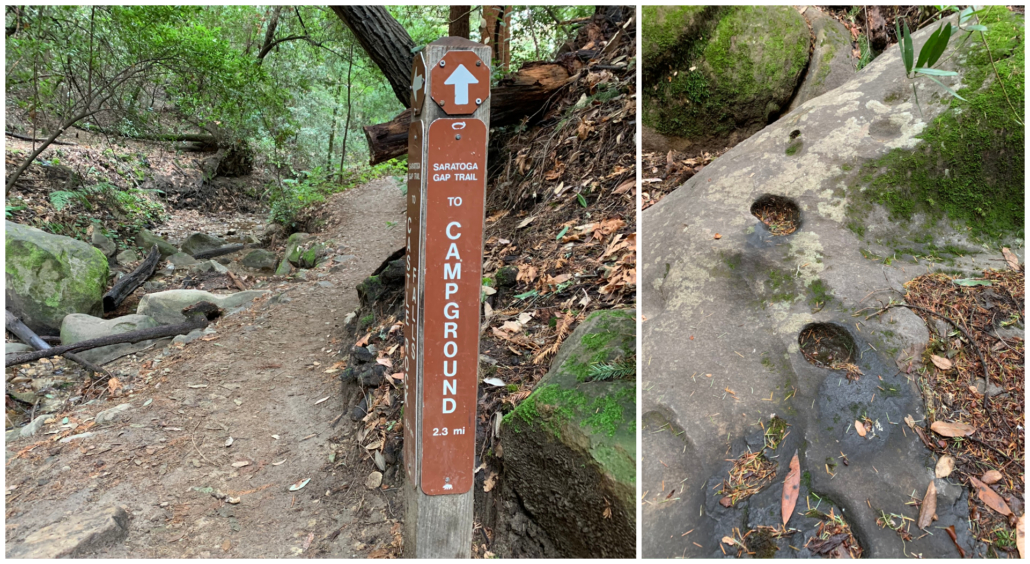 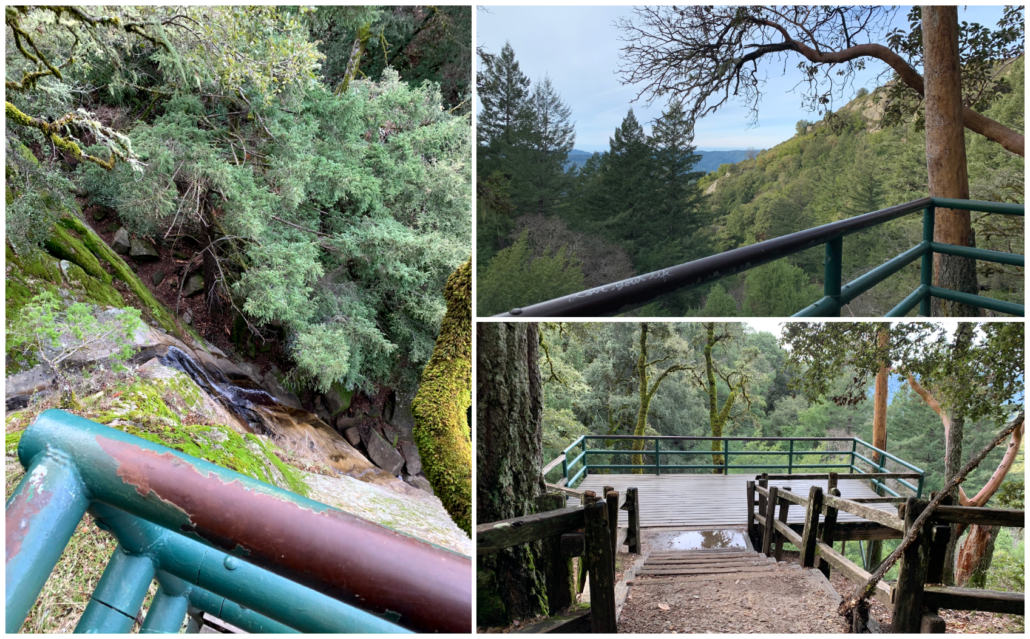 Past the waterfall, the dirt trail descends through California bay and more mossy rocks. Emerge from the forest out into what feels like the edge of a precipice. Waves of forest, valleys, ridges, and peaks emanate from your viewpoint. It’s a 180° view from east to west of the San Lorenzo Watershed and the Santa Cruz Mountains. Here, the partly shady forest gives way to a chaparral community—manzanita, chamise, and toyon. You may have to use your hands in spots to climb over smooth boulders. 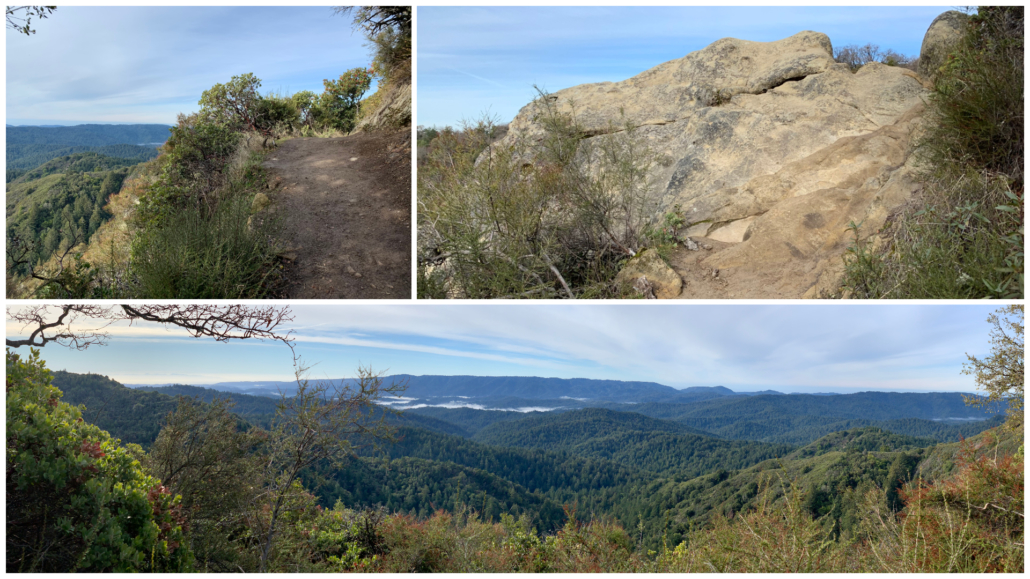 At 1.5 miles, bear left past the Interconnector Trail towards the natural preserve boundary sign. It’s a little disarming how the trail narrows quite a bit here, but you’re on the right track. A brief section with rock steps and a make-shift handrail makes it feel like an adventure. 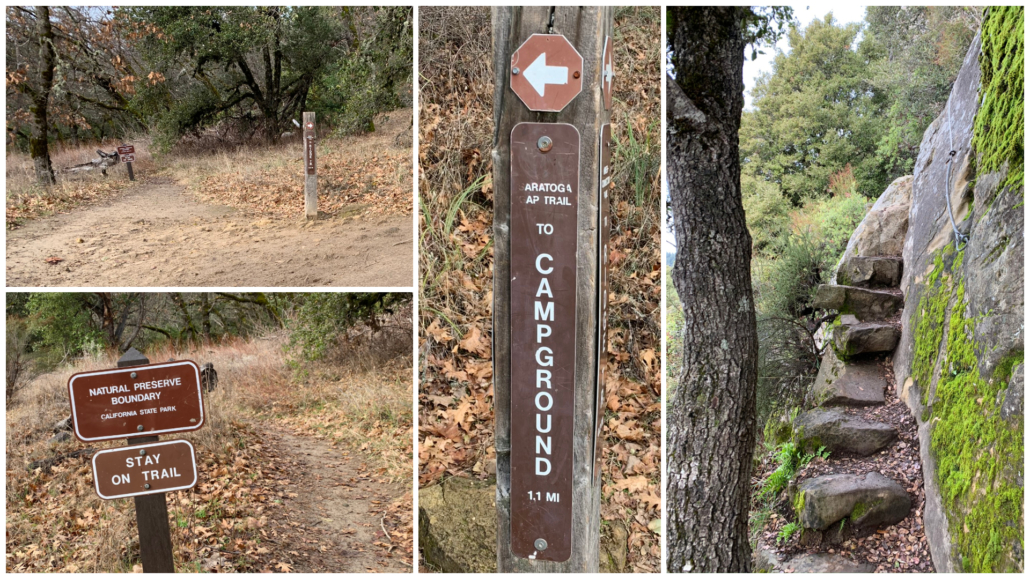 At 2.2 miles, pass a Nature Trail sign with a pamphlet holder. Here, the Nature Trail overlaps briefly with the Saratoga Gap Trail. Outside of the rainy season, rangers fill the pamphlet holder with interpretive brochures that correspond to numbered signposts. The posts identify plants and unique features in Castle Rock State Park. The trail honors Danny Hanavan, a young member of Scout Troop 39 in Los Altos. Danny loved being outside in nature—camping, hiking, and fishing. He also played baseball and piano. At age 12, he passed away from a cerebral hemorrhage, and scouts built this trail in his honor. 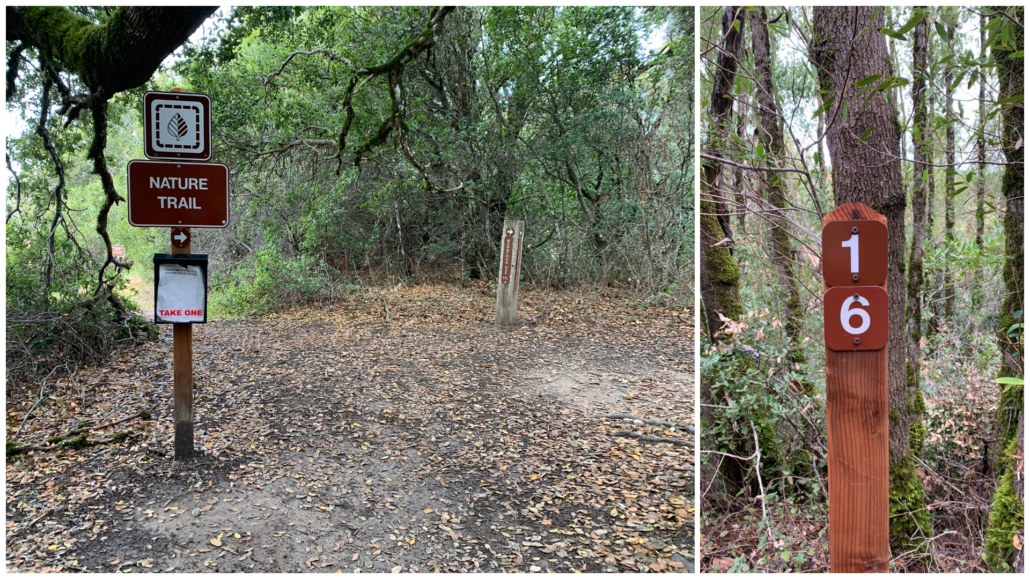 At 2.5 miles is a three-way junction for the Saratoga Gap Trail, Ridge Trail, and Castle Rock Trail Camp. Turn left to explore the campground—a 0.3 mile round-trip, 15-minute detour. The campground has 20 campsites with picnic tables. In the rainy season, fire wood is available for purchase. I would skip it for a snack break and instead wait for the views on the Ridge Trail, particularly around Goat Rock. 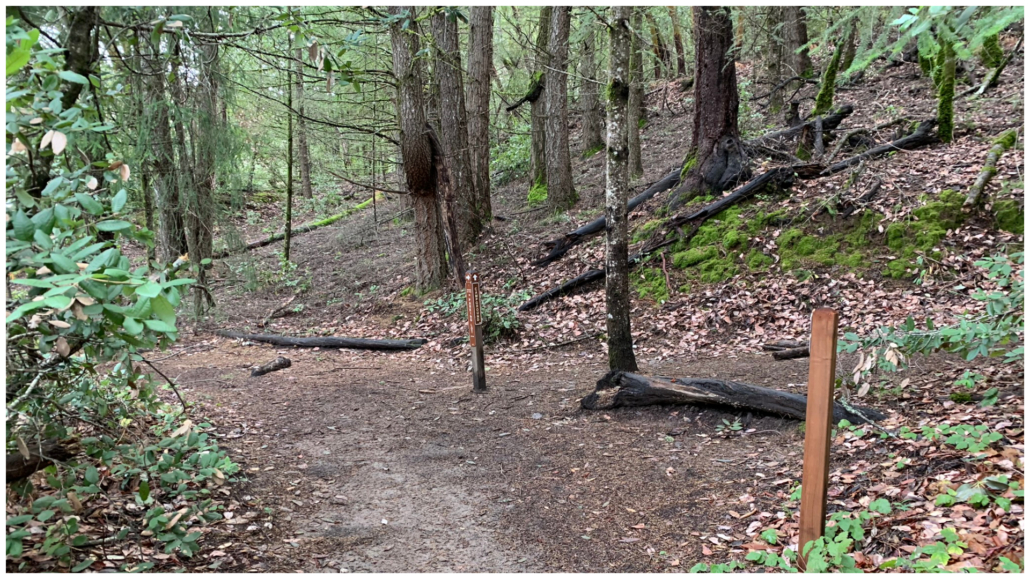 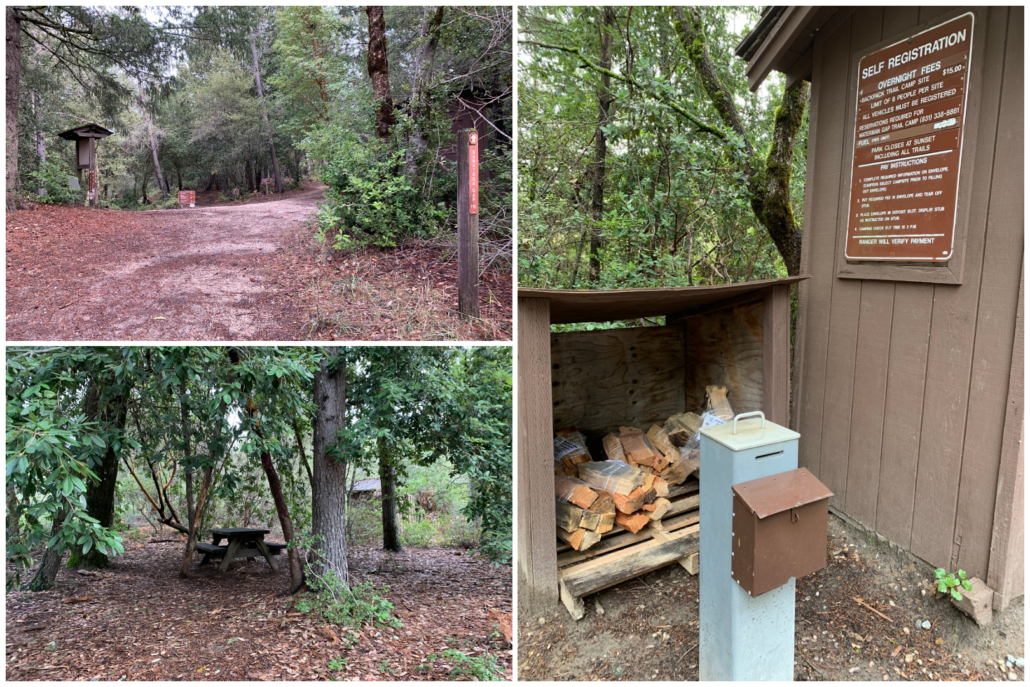 After exploring the campground, retrace your steps to the three-way junction at 2.8 miles. Hop on the Ridge Trail, heading east towards the parking lot. The first real climbing of your day starts here on a moderate incline up through a shady forest of tanoak and evergreen oak. The trail swings above the Saratoga Gap Trail, and you may hear other hikers below. It is mostly forest views as you pass junctions with the Interconnector Trail and the Emily Smith Observation Point, where there is a modest vista. 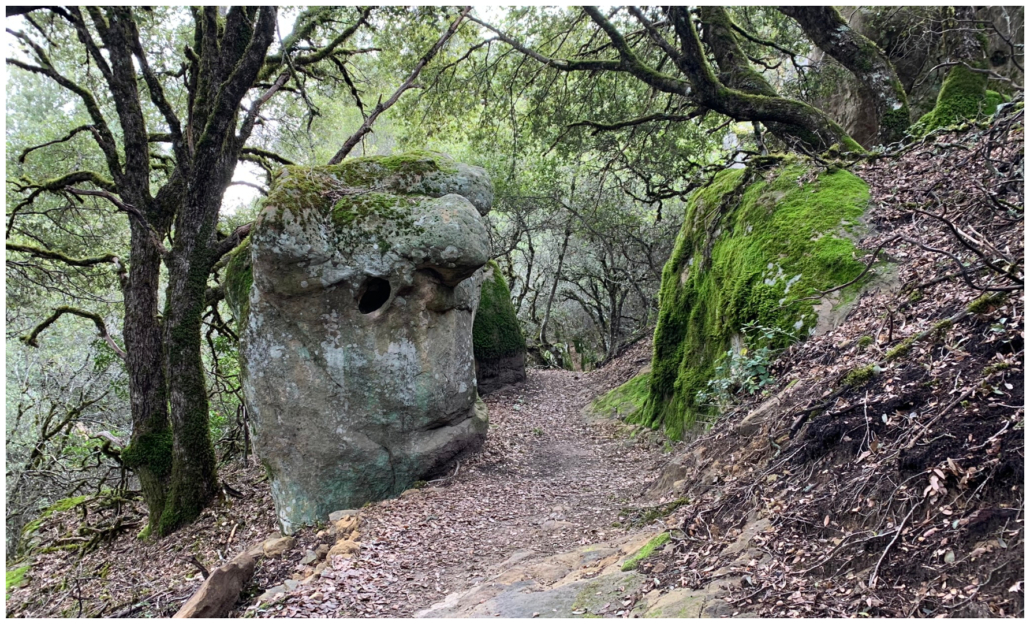 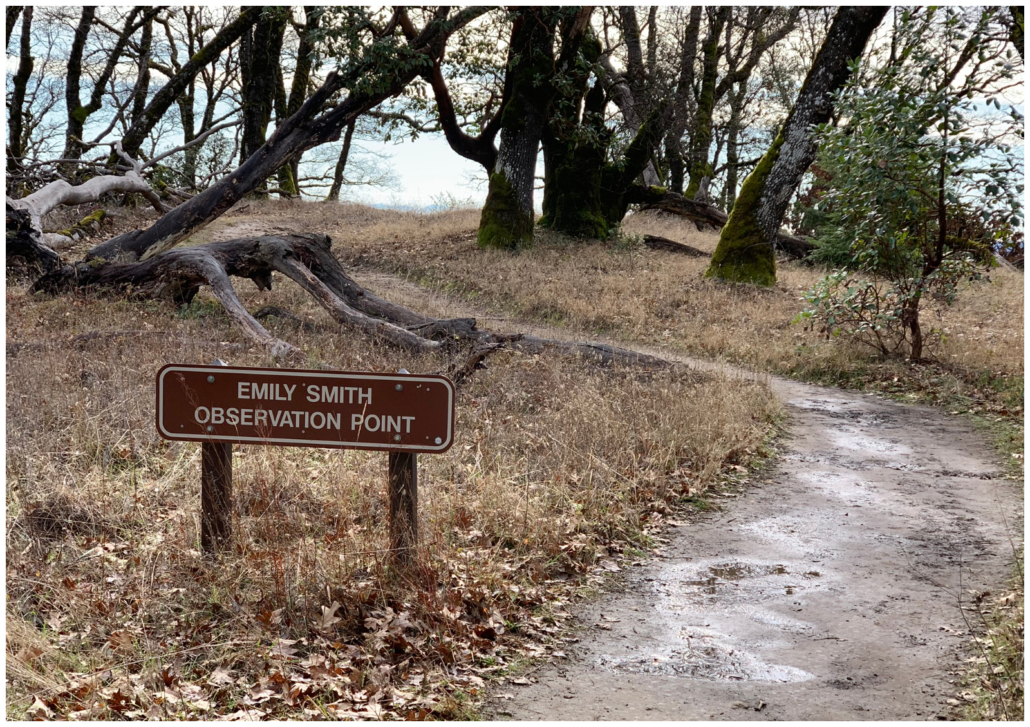 At 4.1 miles, arrive at Goat Rock. Turn right towards the Scenic Overlook sign and a viewpoint in 300 feet. A panoramic interpretive sign identifies peaks of the Santa Cruz Mountains, birds, plants, Monterey Bay, and Kings Creek. The benches and views make it a good stop for a snack break. 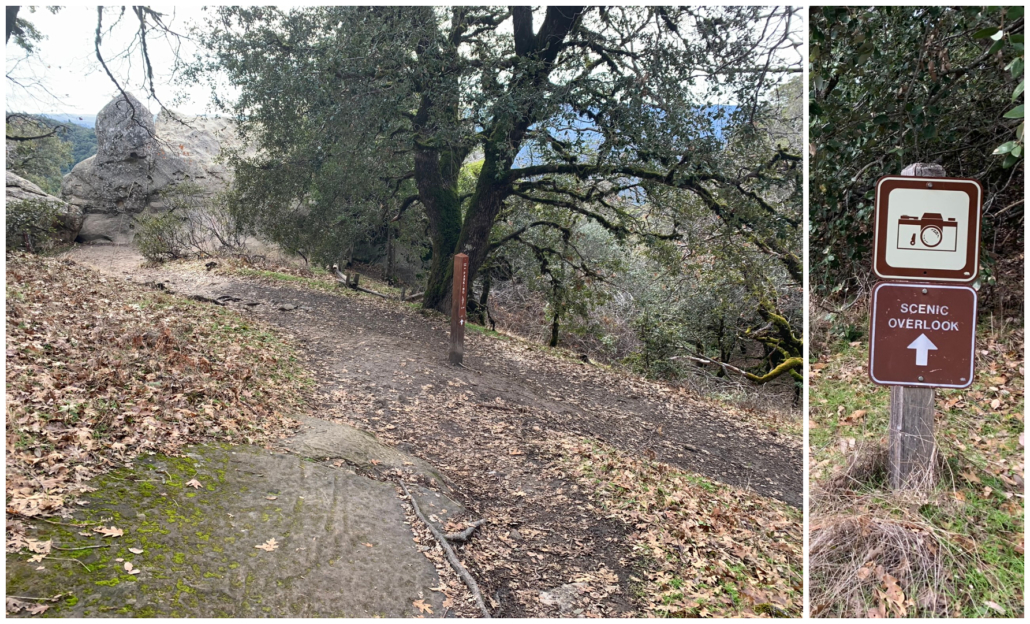 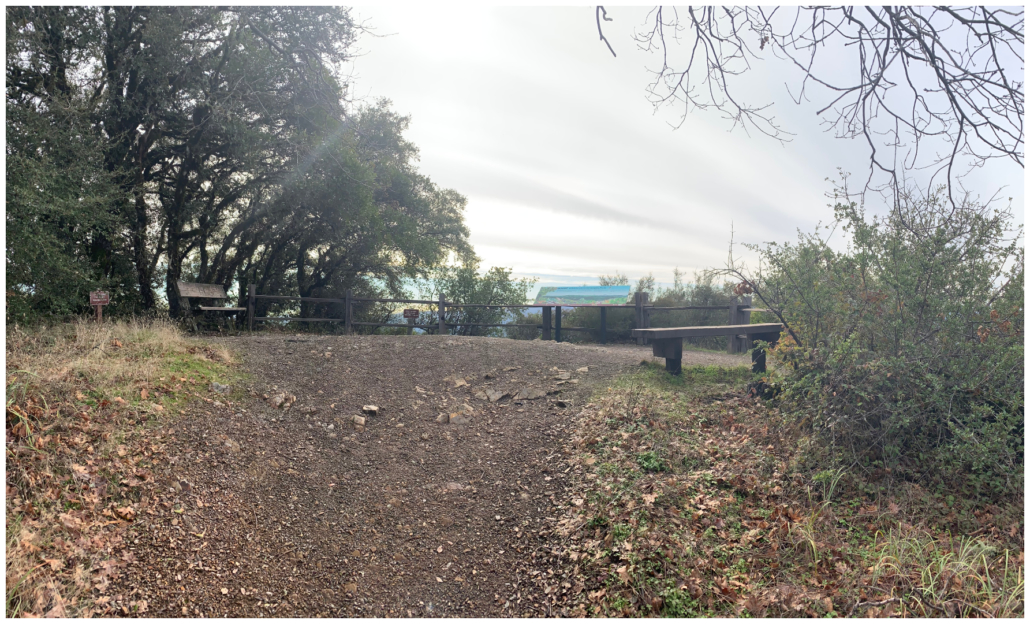 Return to the Ridge Trail and Goat Rock, continuing east towards the parking lot. Descend a wooden staircase and a waterfall of boulders. Pass sculpted sandstone boulders and big beautiful mossy rocks with tiny little ferns growing out of them. 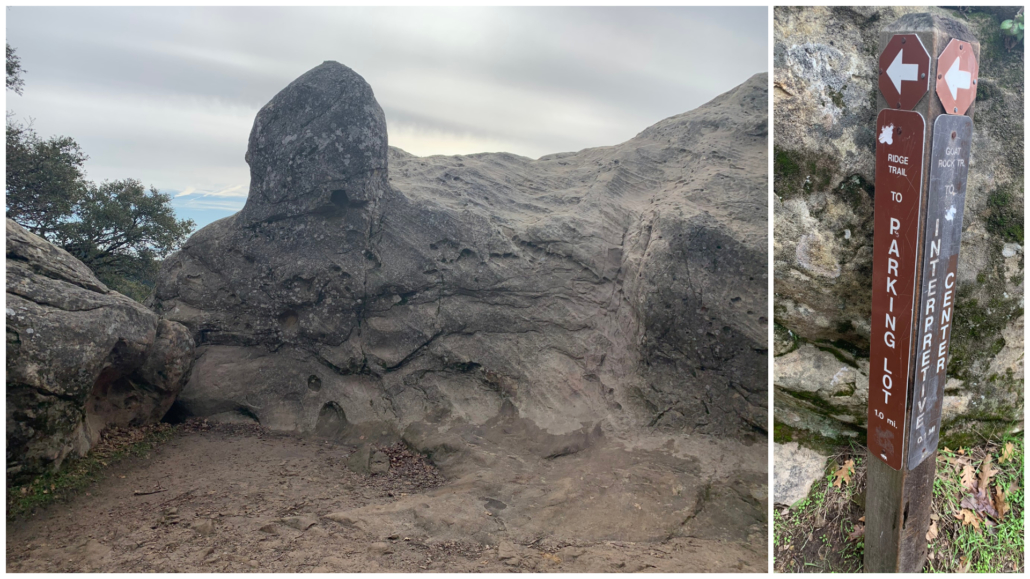 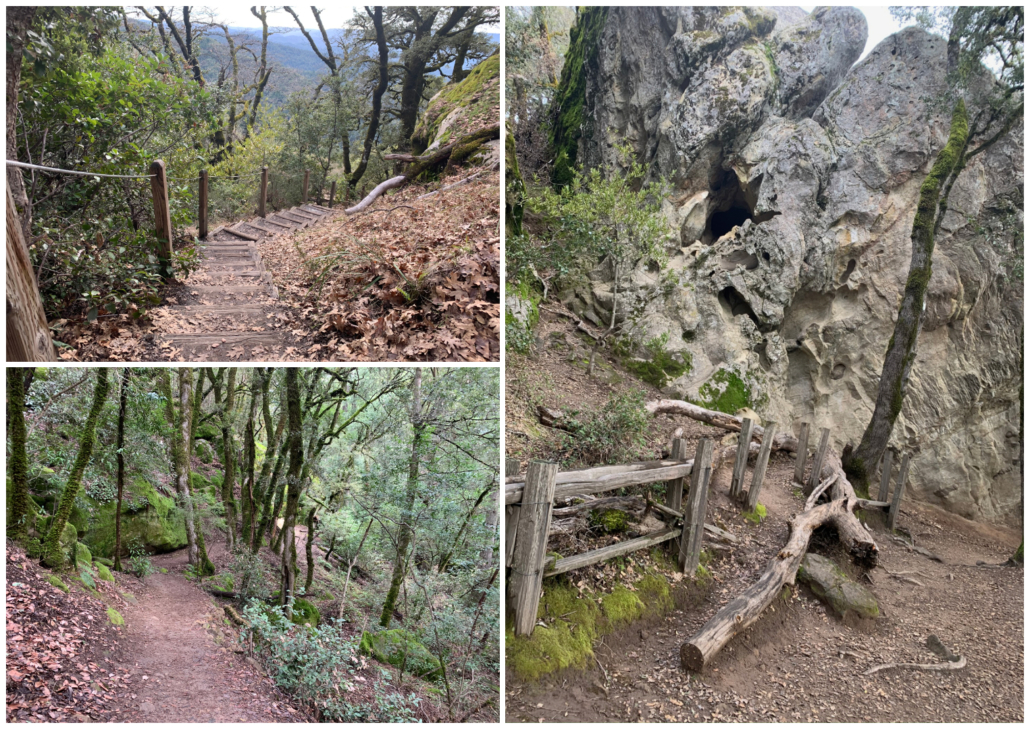 At the 4.6-mile mark, return to the junction with the Saratoga Gap Trail and cross back over the pedestrian bridge. Retrace your steps back to the trailhead. To do the extra 1.75-mile loop to Castle Rock, follow signs back at the first wooden pedestrian bridge for the Castle Rock Trail. 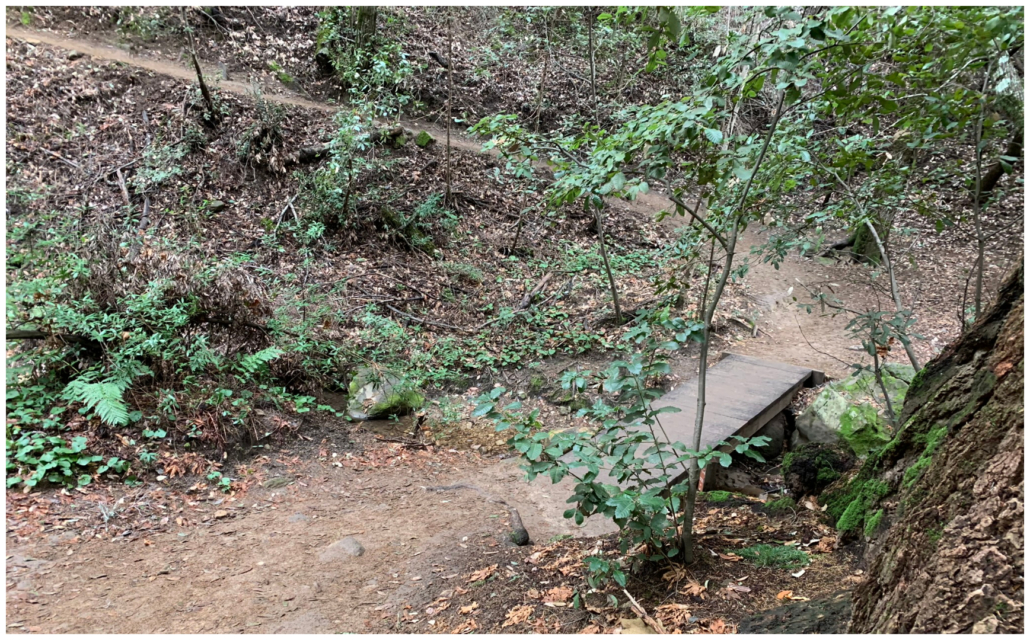 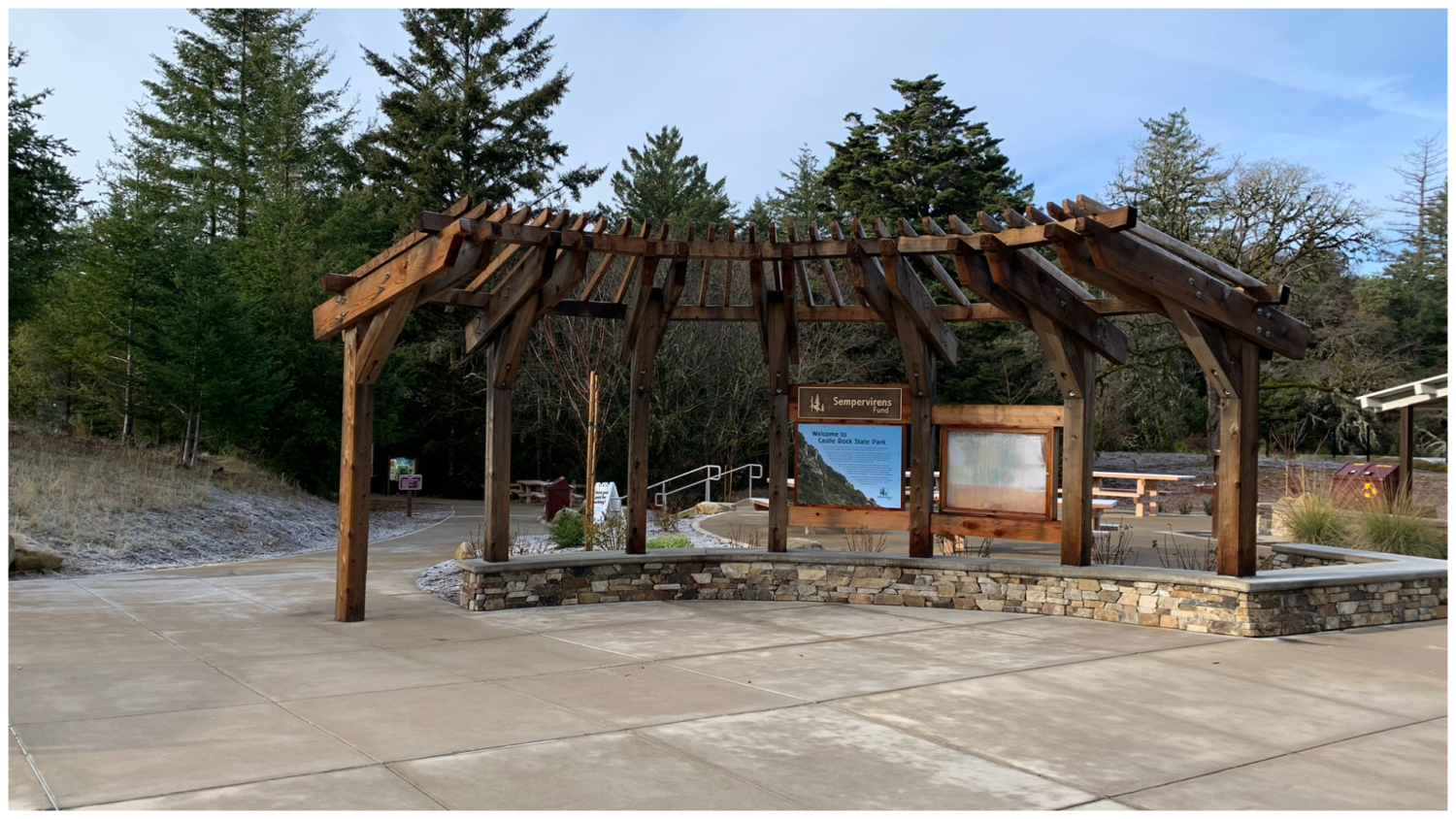 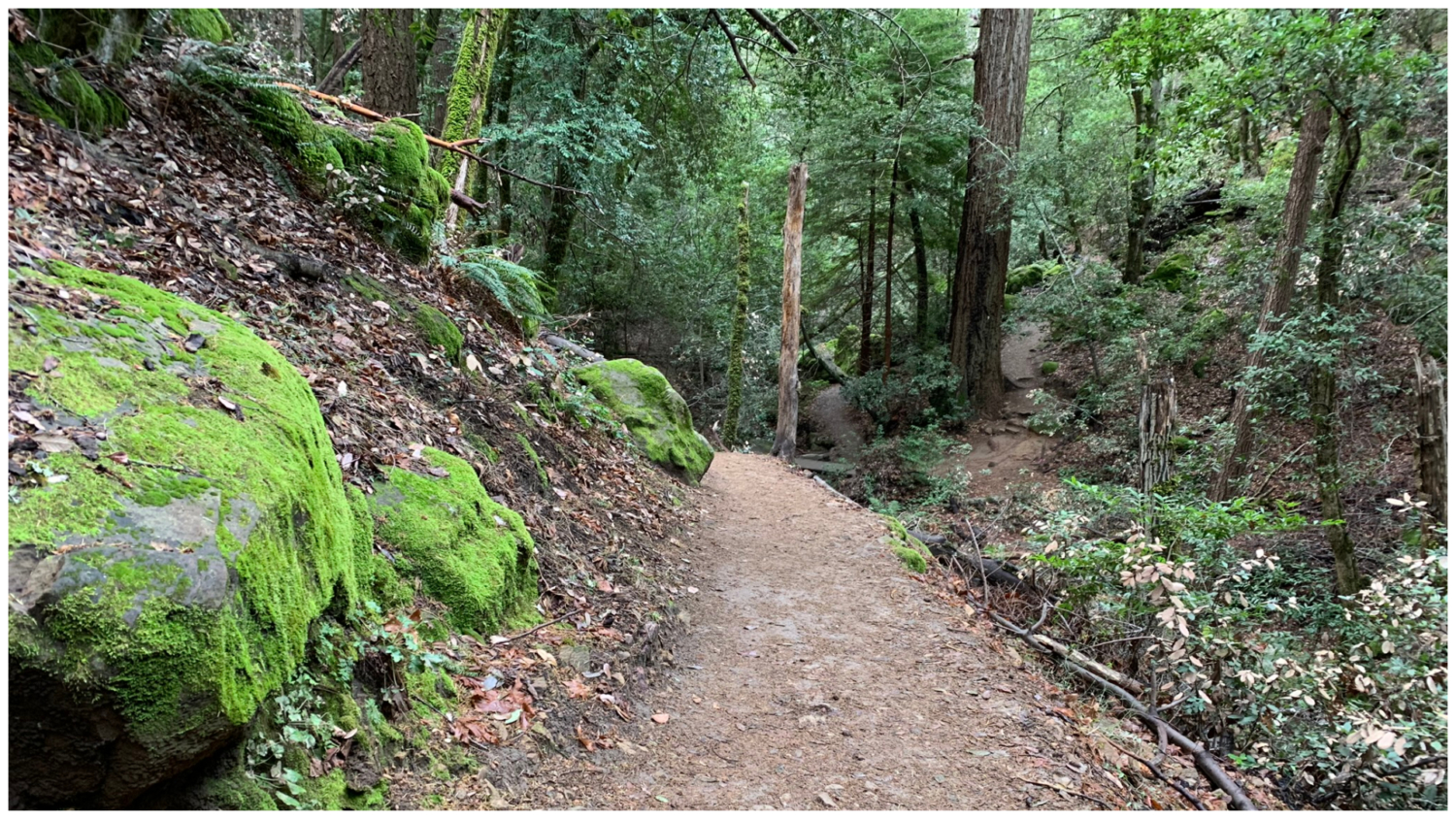 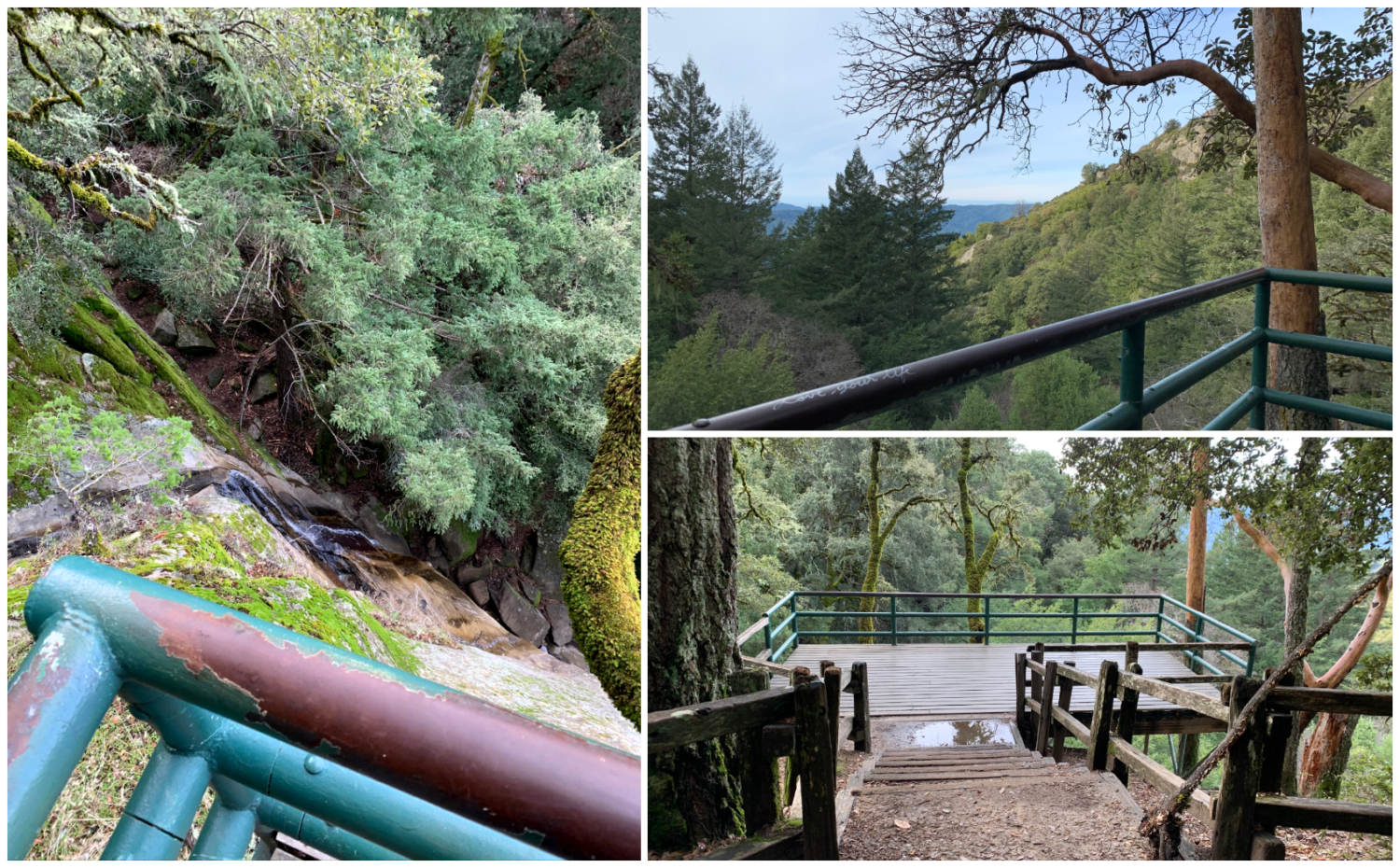 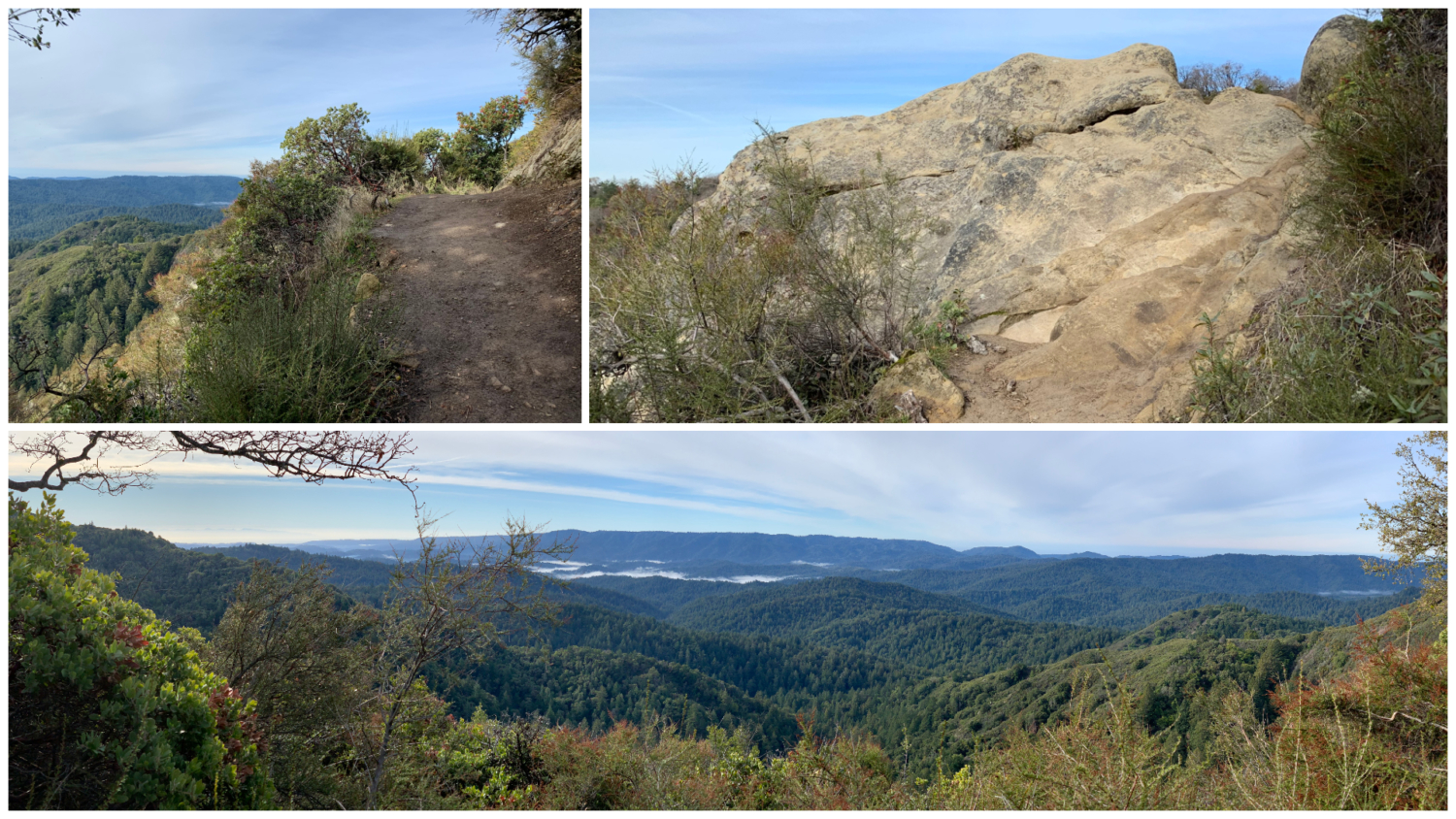 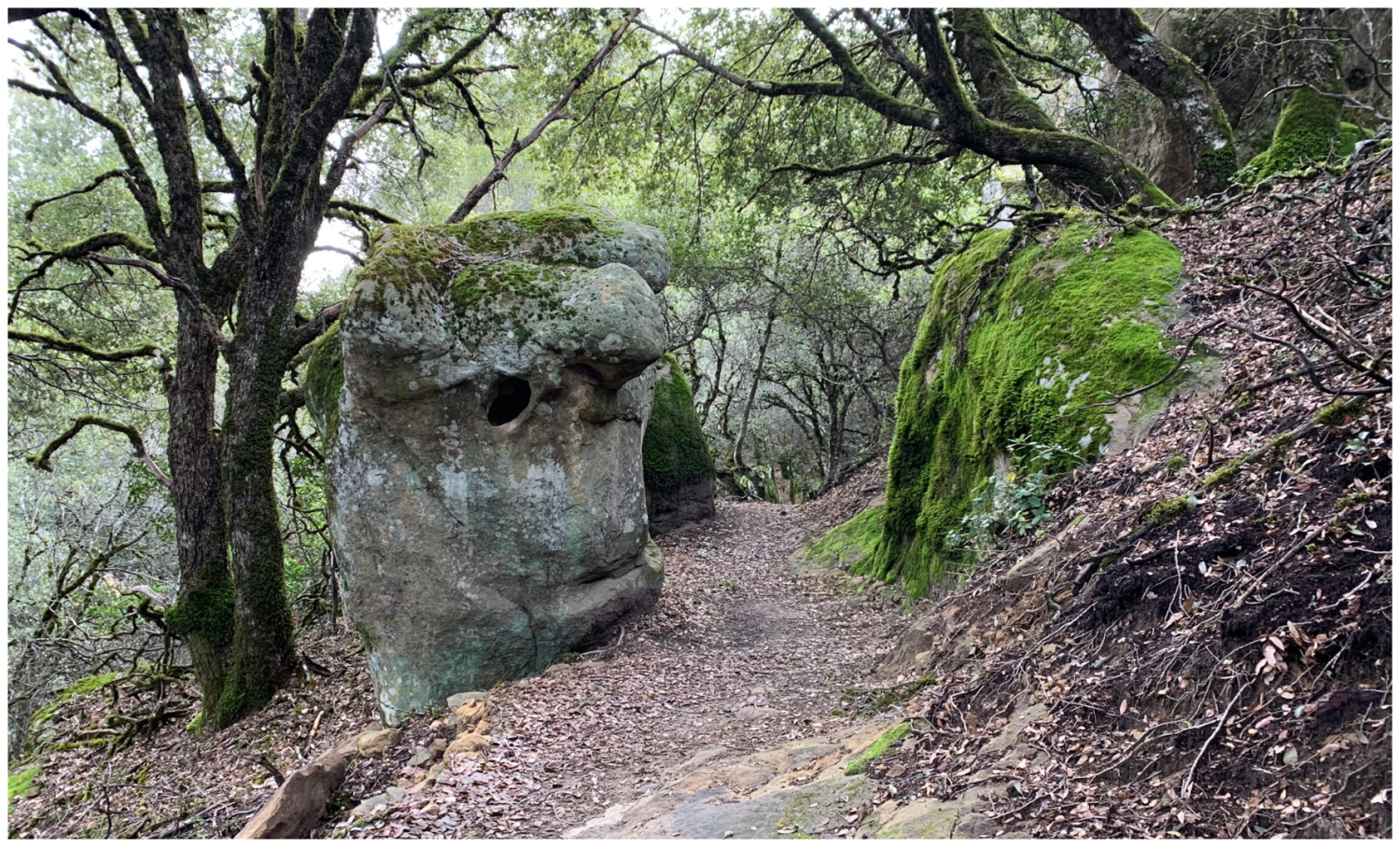 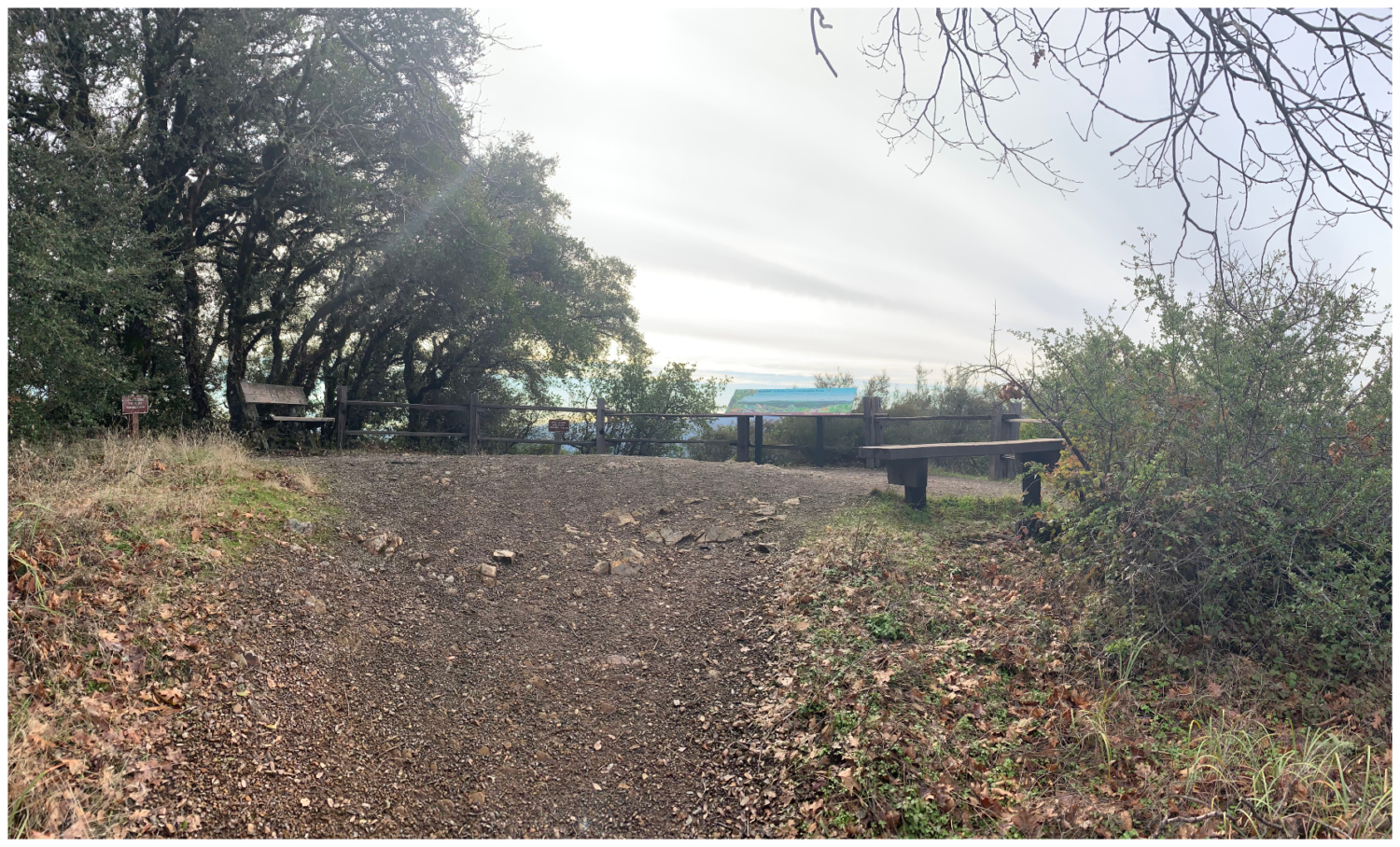 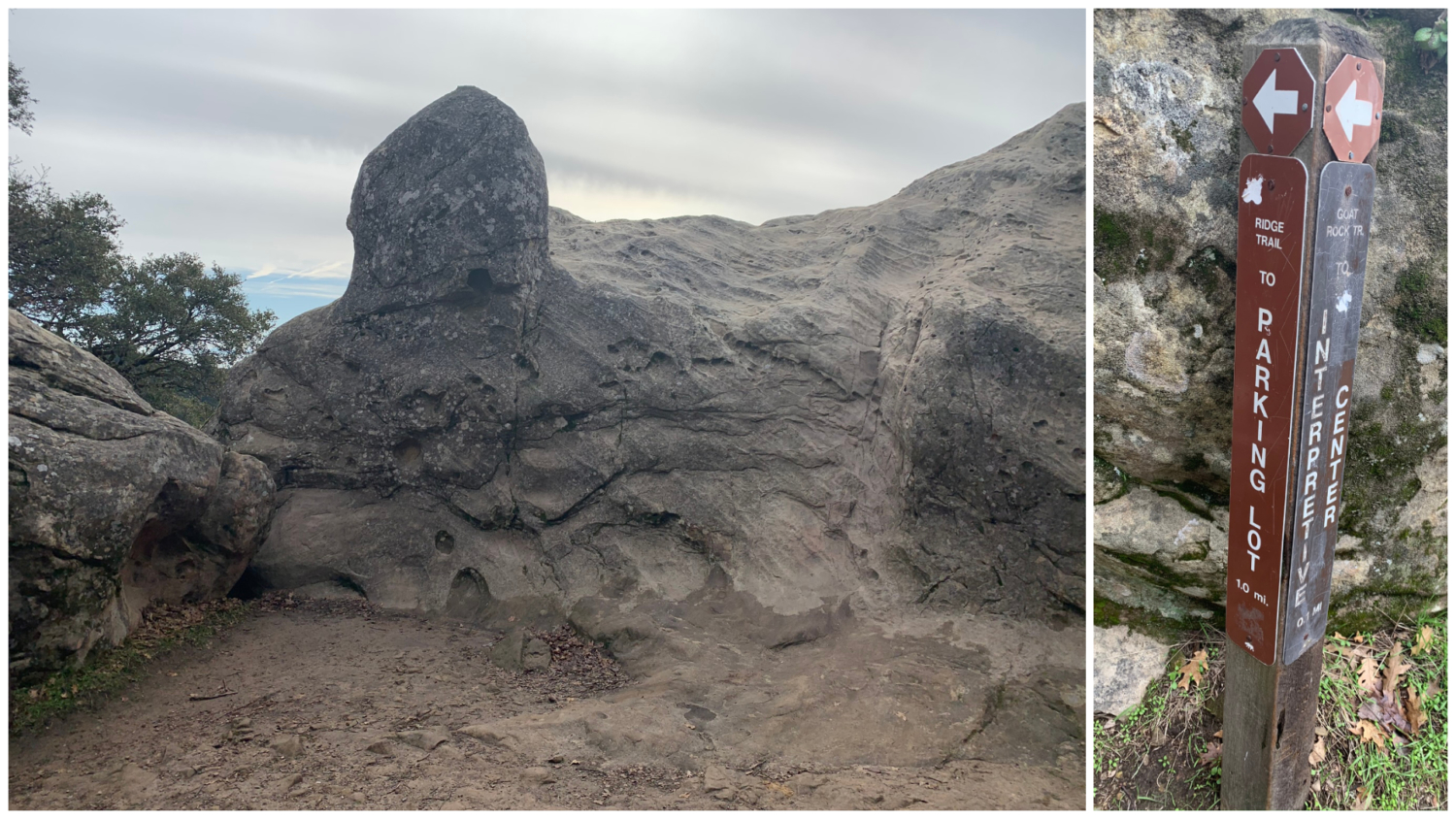 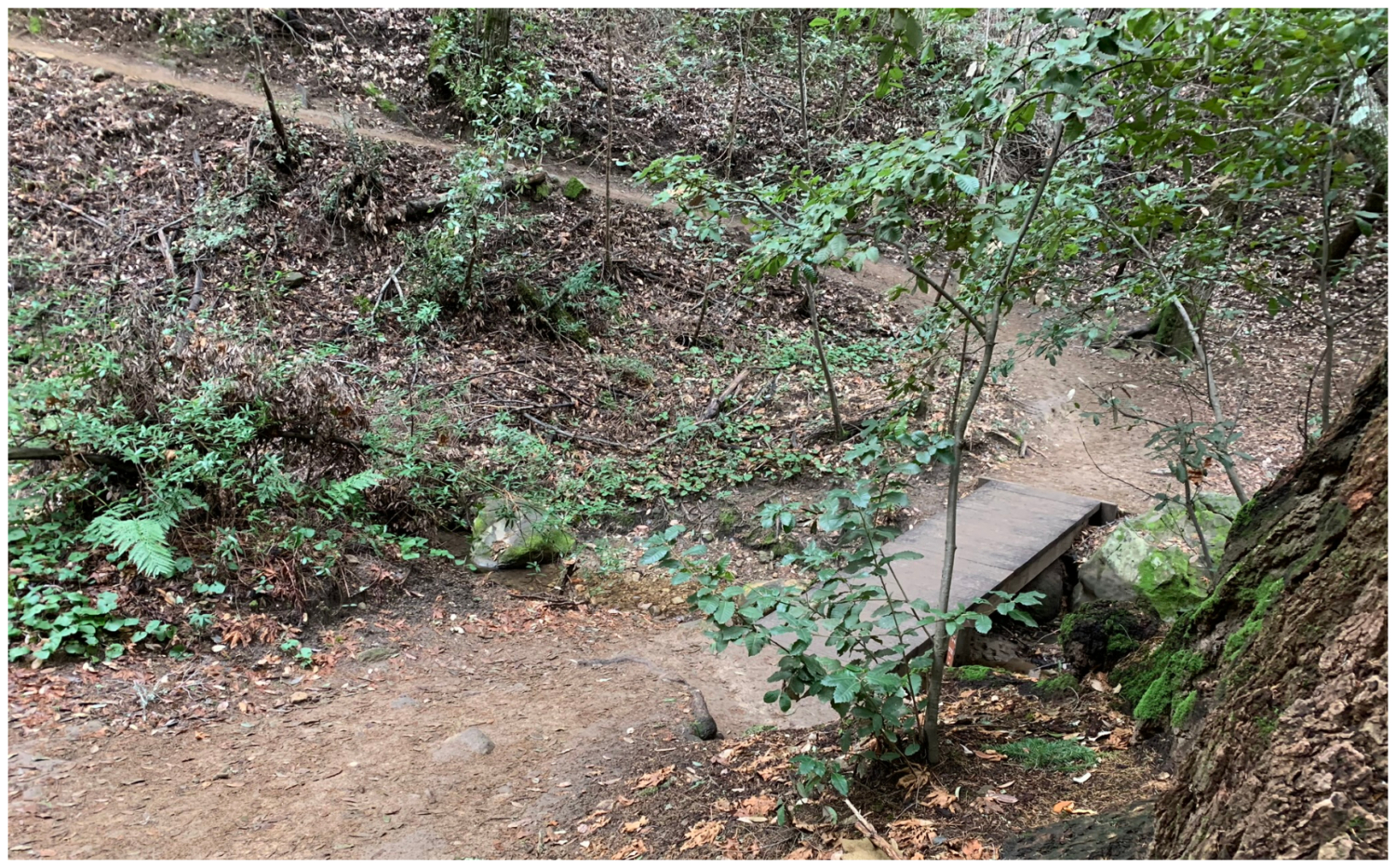 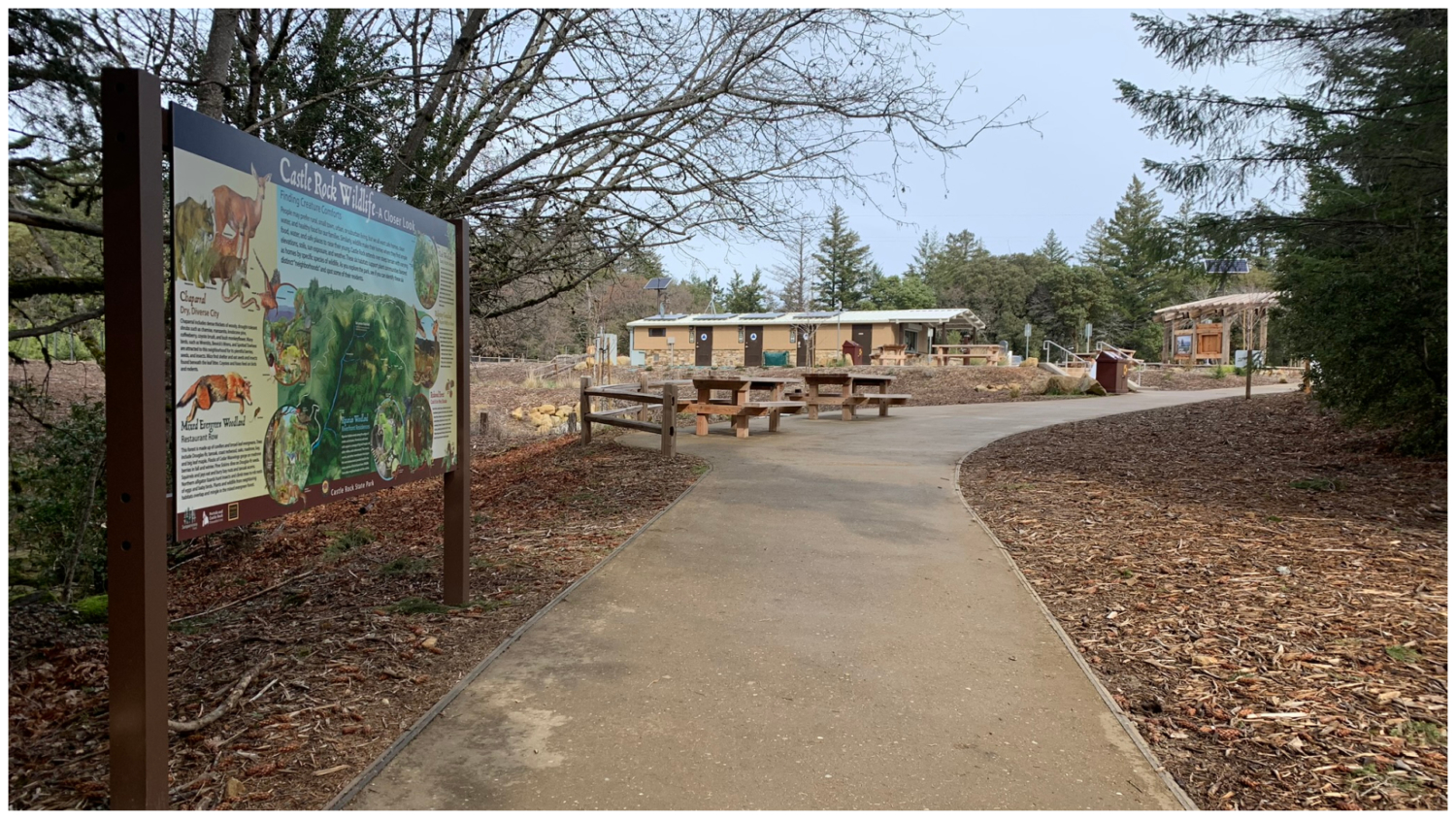 Trails are well signed, well maintained, and easy to follow. The route is mostly dirt single track and travels through sandstone boulders. You may need to use your hands in spots, and hiking poles will come in handy. The loop is partly shady, with exposed, sunny stretches on the Saratoga Gap Trail.

There are 20 campsites at Castle Rock Trail Camp, 2.6 miles west of the Kirkwood parking lot. Five sites are first-come, first-served, fifteen are reservable through the Santa Cruz Mountain Backcountry Trail Camps page. Campsites have picnic tables and fire rings. Fires are allowed in fire rings during the rainy season.

Starting from downtown Saratoga, drive 7.0 miles west on Highway 9 to the intersection with Highway 35. Turn left onto Highway 35 towards Castle Rock State Park. Drive 2.3 miles, and then turn right into the Robert C. Kirkwood parking lot. Use the credit card machines to purchase your parking pass, or head over to the entrance window where rangers can take payments in cash or credit card.