This unobtrusive, but surprisingly beautiful route marries mining history, alpine scenery, and a trio of small, but picturesque lakes with a minimal amount of effort. The hike’s obscurity comes courtesy of this area’s proximity to bigger and more famous destinations minutes away within Yosemite Park. Hundreds, even thousands of visitors drive by this spot per day, and almost nobody stops to enjoy this route’s exceptional beauty and historic beauty – all the better for you if you’ve got time on your Yosemite visit for an easy hike with high scenic rewards. 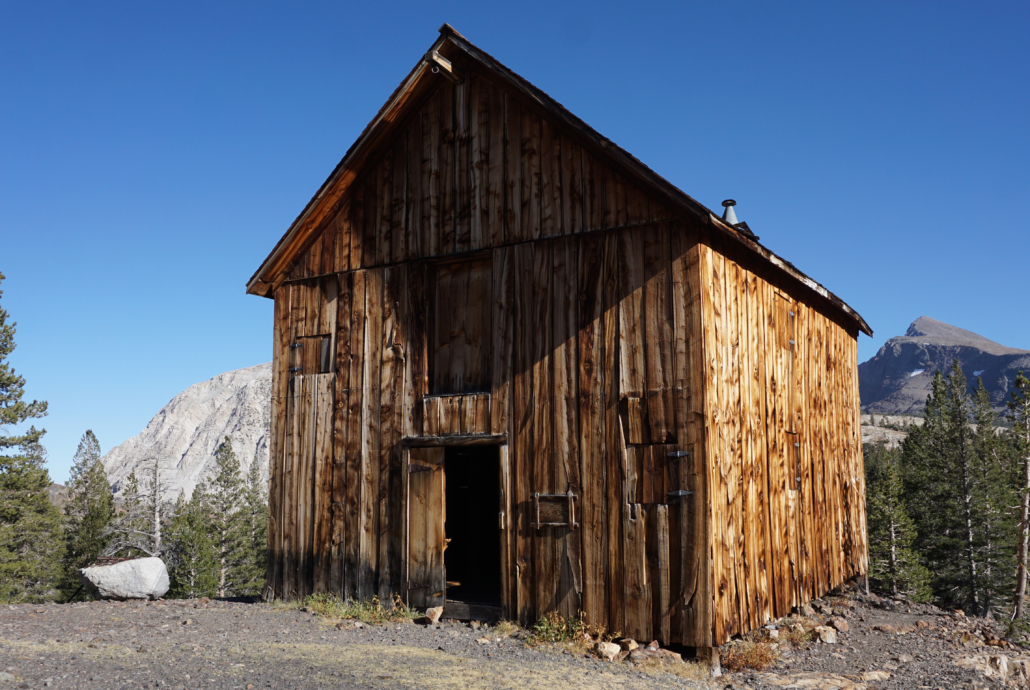 California’s Gold Rush inspired thousands of ambitious prospectors to head to the hills in the middle of the 19th century in search of easy riches and a wild, untamed life. While the most numerous, lucrative prospects plumbed the west side of the range, a smaller number of prospectors set up shop on and along the Sierra Crest. A number of historic communities and mines were established, including the Mono Pass colony, the May Lundy mine, the Great Sierra Mine near the Gaylor Lakes, and Bennettville, which was also called Tioga and Bennett Town at various points.

Bennettville lies only a few direct miles from Tioga Pass, the southernmost road-accessible pass on the east side of the Sierra and the primary access point for the Yosemite’s high country. Bennettville never profited from the suspected riches lying deep within the metamorphic slopes and mountainsides in the area, but the settlers did establish the first iteration of Tioga Road, which was later improved upon by the Park Service.

As the profits failed to materialized, investors pulled the plug on Bennettville, leaving the town to rot in obscurity. In 1993, the Forest Service restored an assay office and a bunk house while installing two interpretive plaques to memorialize the town. The only other traces that remain are the old road bed that once connected the town to Tioga Pass and a mine shaft a few hundred yards west of the town site.

A significant portion of this hike lies within the Harvey Monroe Hall Natural Research Area. This unit of Inyo National Forest land is set aside for researchers to study different aspects of alpine habitats over time, and for this reason, overnight camping is not allowed, tempting though it may seem.

After locating the obscure trailhead, which lies next to the camp host within Junction Campground, follow the rocky trail as it weaves and wends over jumbled terrain along the banks of Mine Creek. The creek lies within a miniature gorge just to the left, and the copious copses of willows that the creek nurtures turn gold during late summer. Despite a couple of dips in elevation, the trail picks up 250′ of elevation over the first 0.7 mile as it climbs toward the Bennettville site. 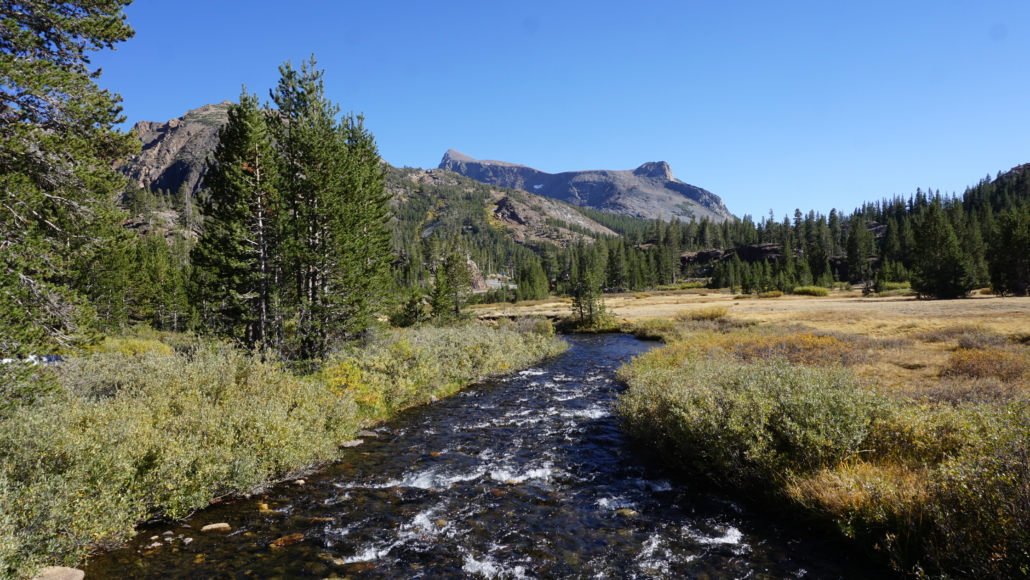 You notice the bunkhouse atop a slope as you approach the first interpretive plaque, but as you climb a few more feet, you also spot the assay office and an additional interpretive sign. In addition to the historic structures, you will also enjoy views of some of the rust colored peaks crowning the Sierra Crest around Tioga Pass, including Mount Dana, Tioga Peak, and Gaylor Peak. A disused dirt road that formerly connected to Tioga Road leads south away from the Bennettville site, but keep right on the single track trail to finish the last spurt of climbing. After hiking a mere 0.1 mile from Bennettville, look to the left across Mine Creek to see one of the old mine shafts that early miners once carved out in search of riches.

The climbing comes to an end at 0.9 mile as the trail crests a moraine before reaching a flat glacial valley containing three separate lakes. The trail reaches the first lake, Shell Lake, a short distance later. At the 1.0 mile mark, keep right at a fisherman’s trail that hugs the banks of the lake. You can follow the fisherman’s trail if you want to explore the lakeshore, but it quickly peters out, leaving you to backtrack to the main path. Don’t be surprised to see people fishing here and later on along the banks of Mine Creek; fish are abundant here, and the lightly traveled nature of the trail reduces competition. 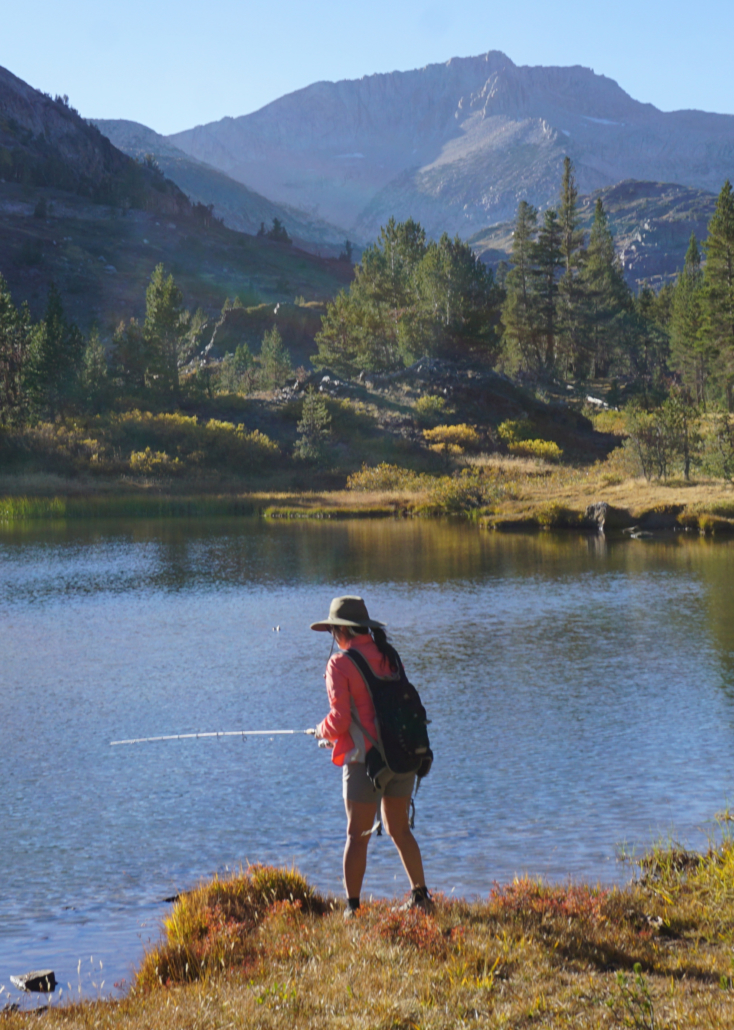 Continue along and then beyond the east bank of Fantail Lake to skirt a second smaller and grassier unnamed lake at 1.4 miles. You can’t reach this lake without traipsing through a marshy meadow, so best to admire from the distance. As you continue, the trail hugs the creek as it meanders through the shade of lodgepole forest. It’s right after the second lake that you pass into the Hall Natural Research Area. Although the trail is unmaintained from here, it’s easy to follow, if not slightly narrower than the usual National Forest system trail. 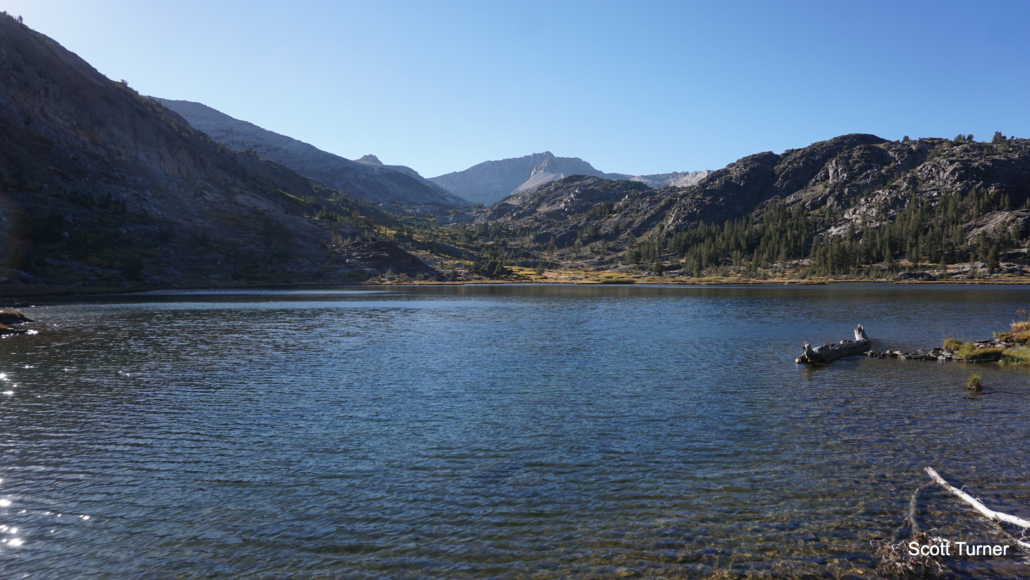 At 1.75 miles, the hike comes to an end at the base of Fantail Lake. Fantail is largest and prettiest of the three lakes, and Mount Conness punctuates the scenery with a 12,590′ exclamation mark atop the Sierra Crest to the northwest. Geology nerds can compare the gray granite of Conness with the more common rust-colored metamorphic rocks underfoot. These metamorphic rocks held an association with precious minerals like gold and silver, and most Eastern Sierra mines lie within this rock band. The metamorphic rocks are relatively rare in the Sierra, as the younger underlying granite pushed most of those rocks upward while erosion and run-off washed them away into the Central and Owens Valleys. Outcrops such as those found at the Tioga Pass area are known as roof pendants. 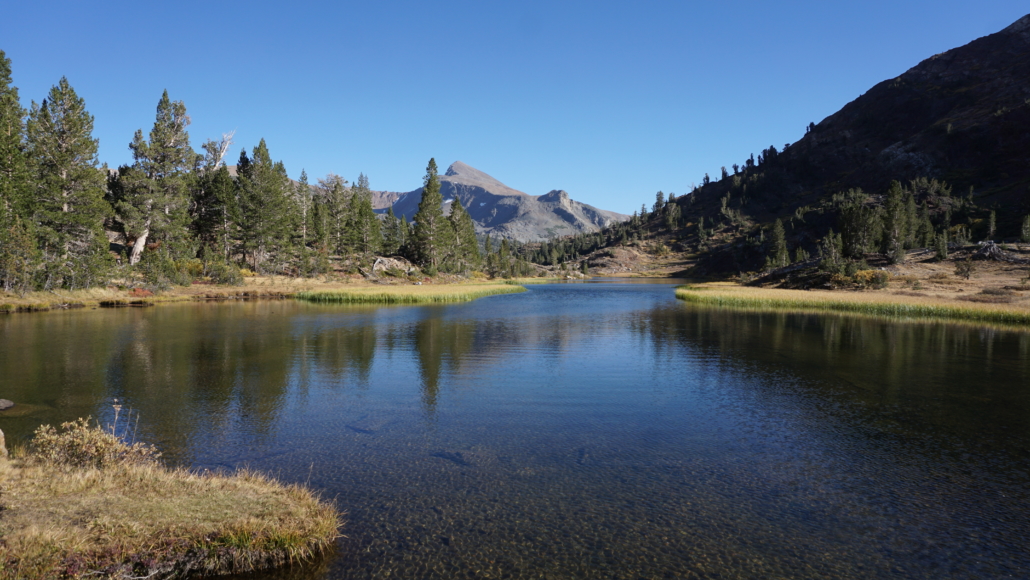 You can wander around Fantail Lake to your heart’s content before returning. The informal trail does continue northwest toward Spuller Lake, but the grade and the going get much tougher as you climb into higher elevations. Fantail is a good turnaround spot for a casual hike. 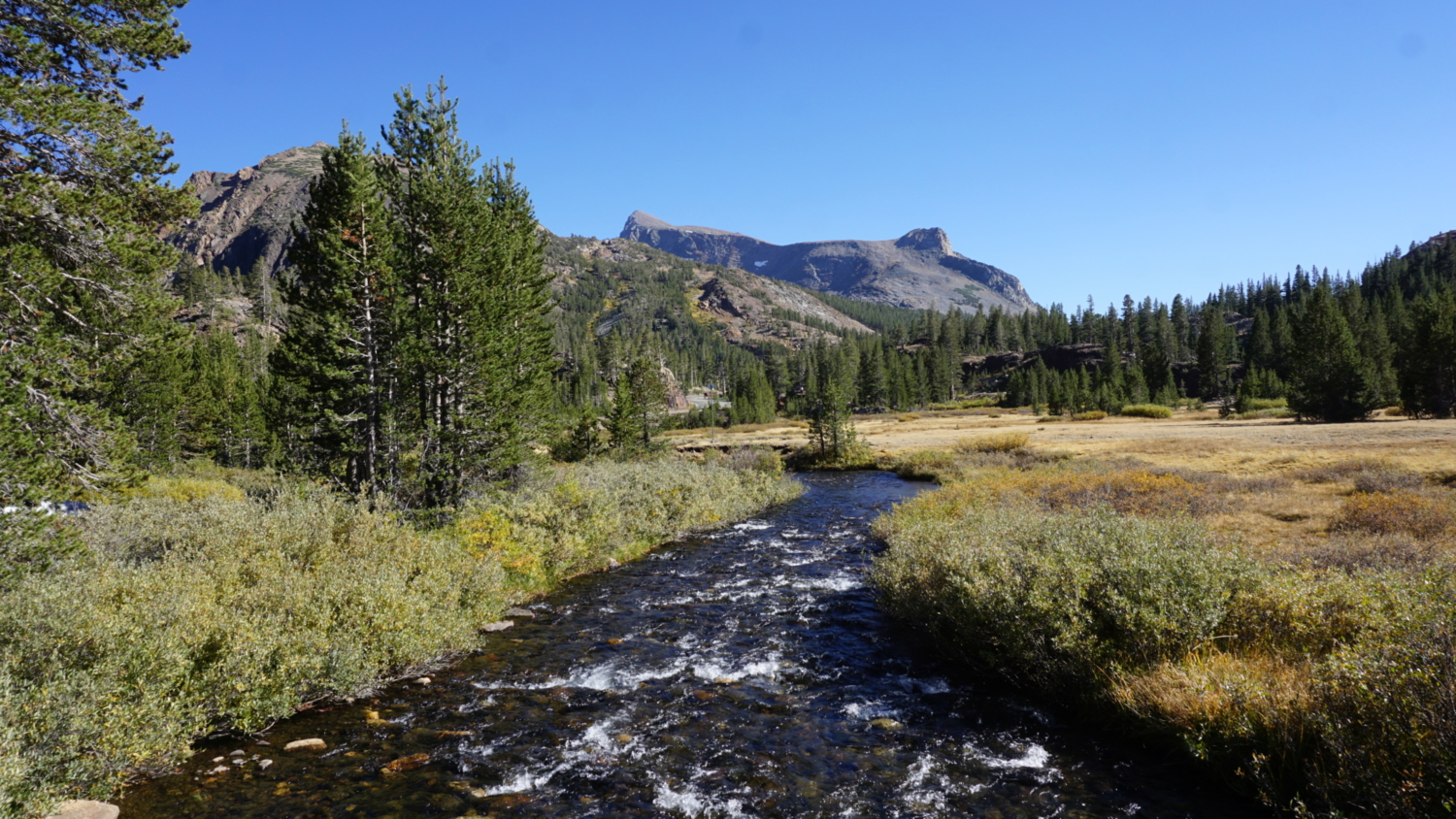 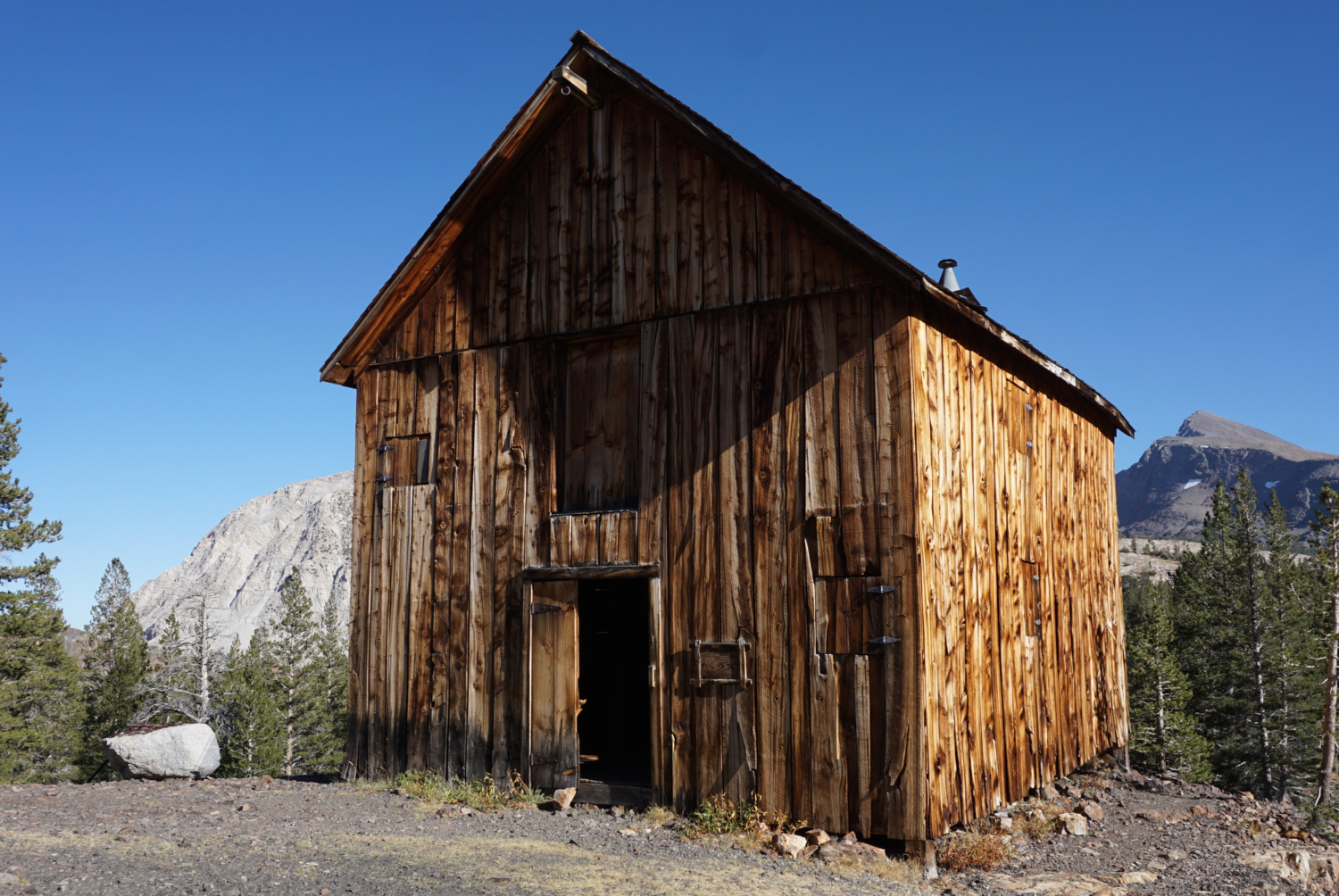 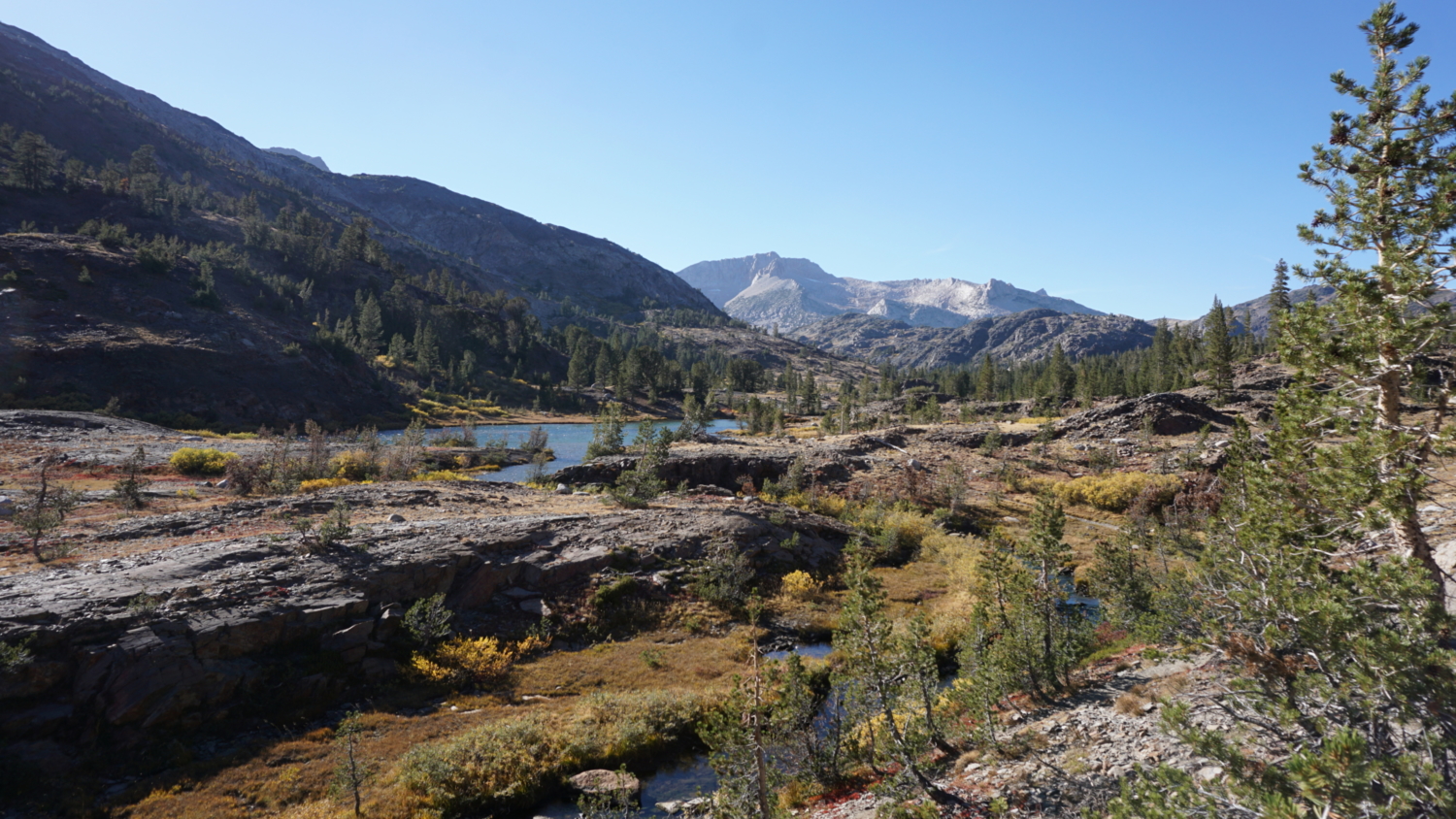 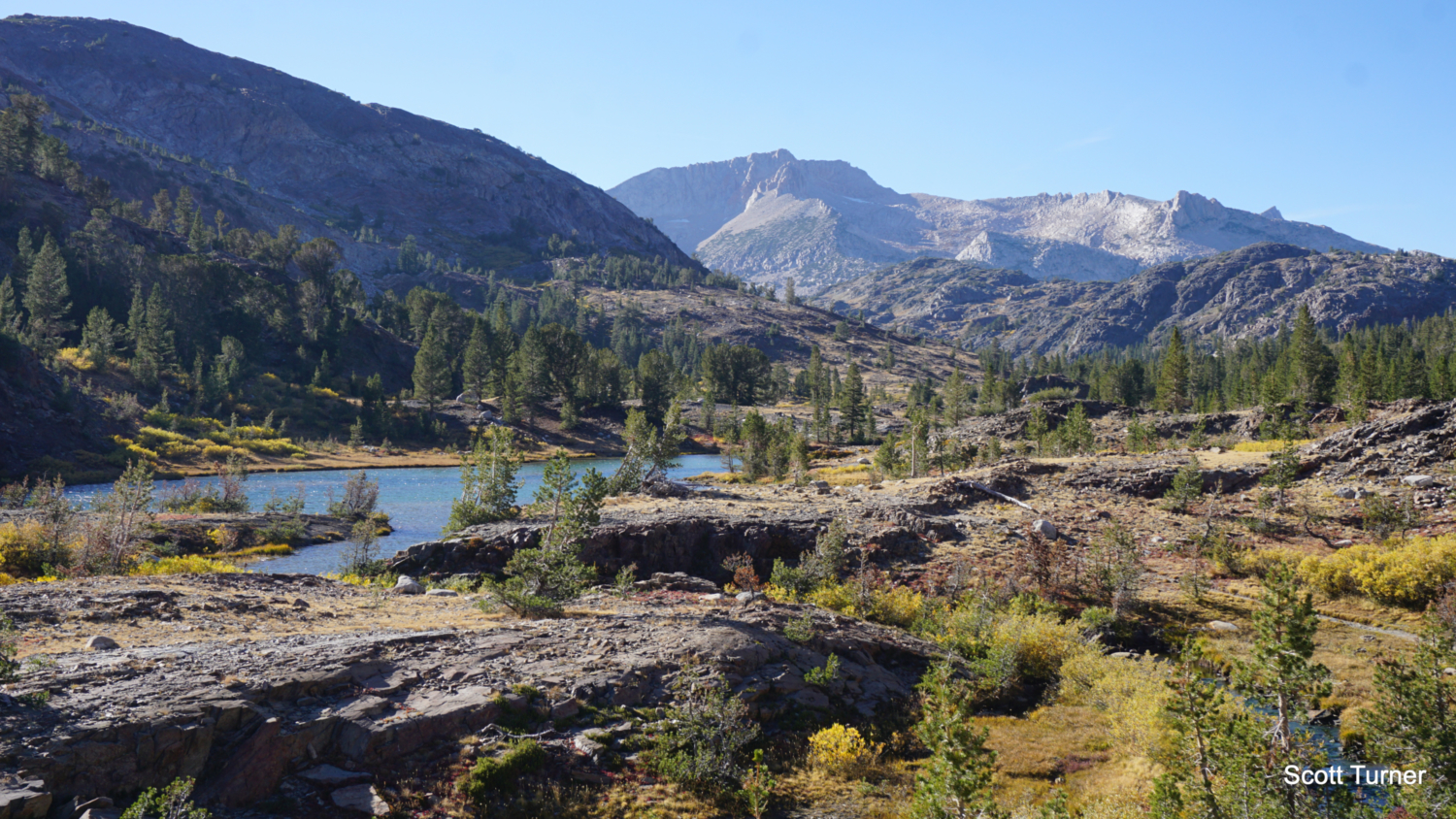 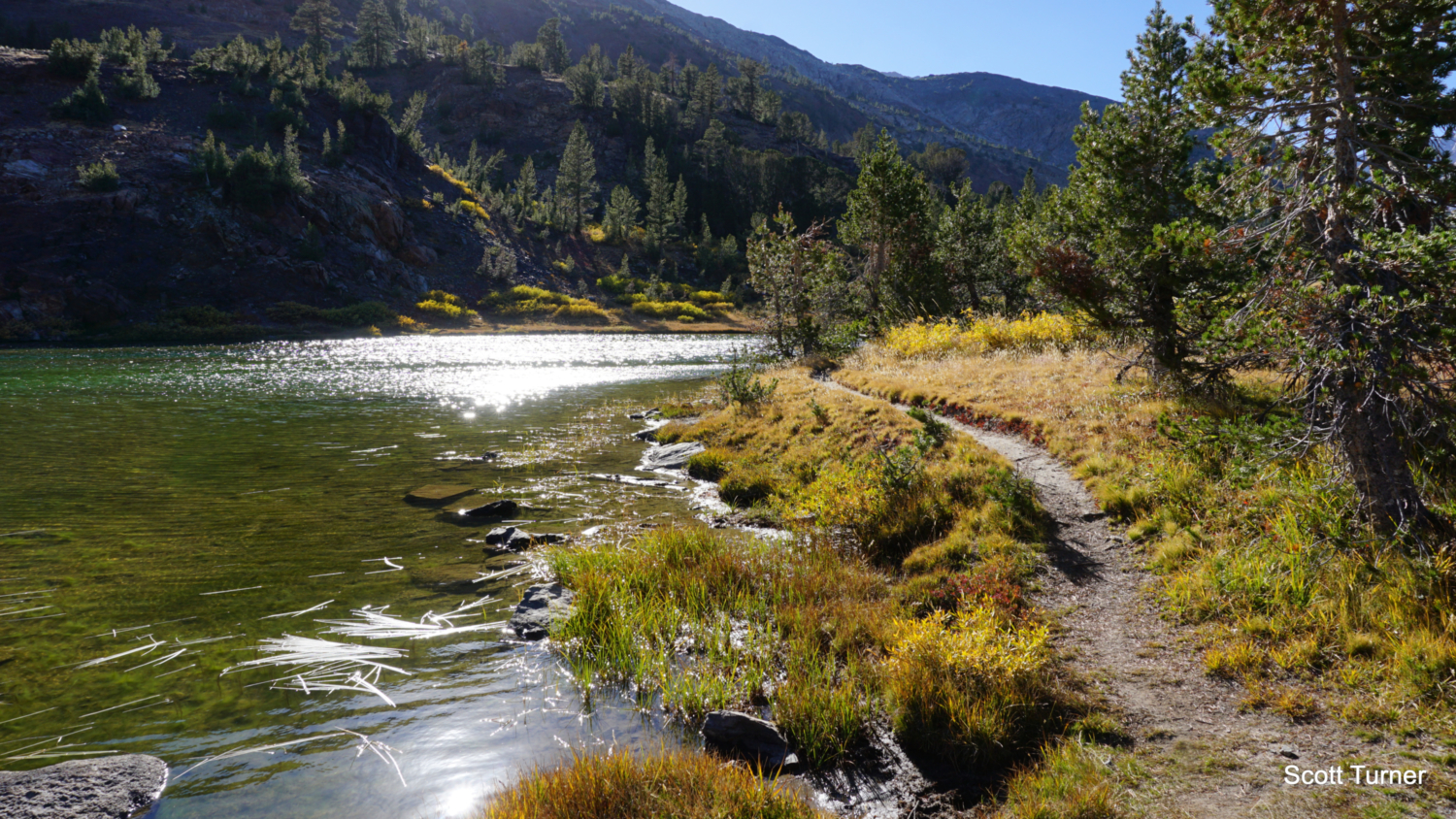 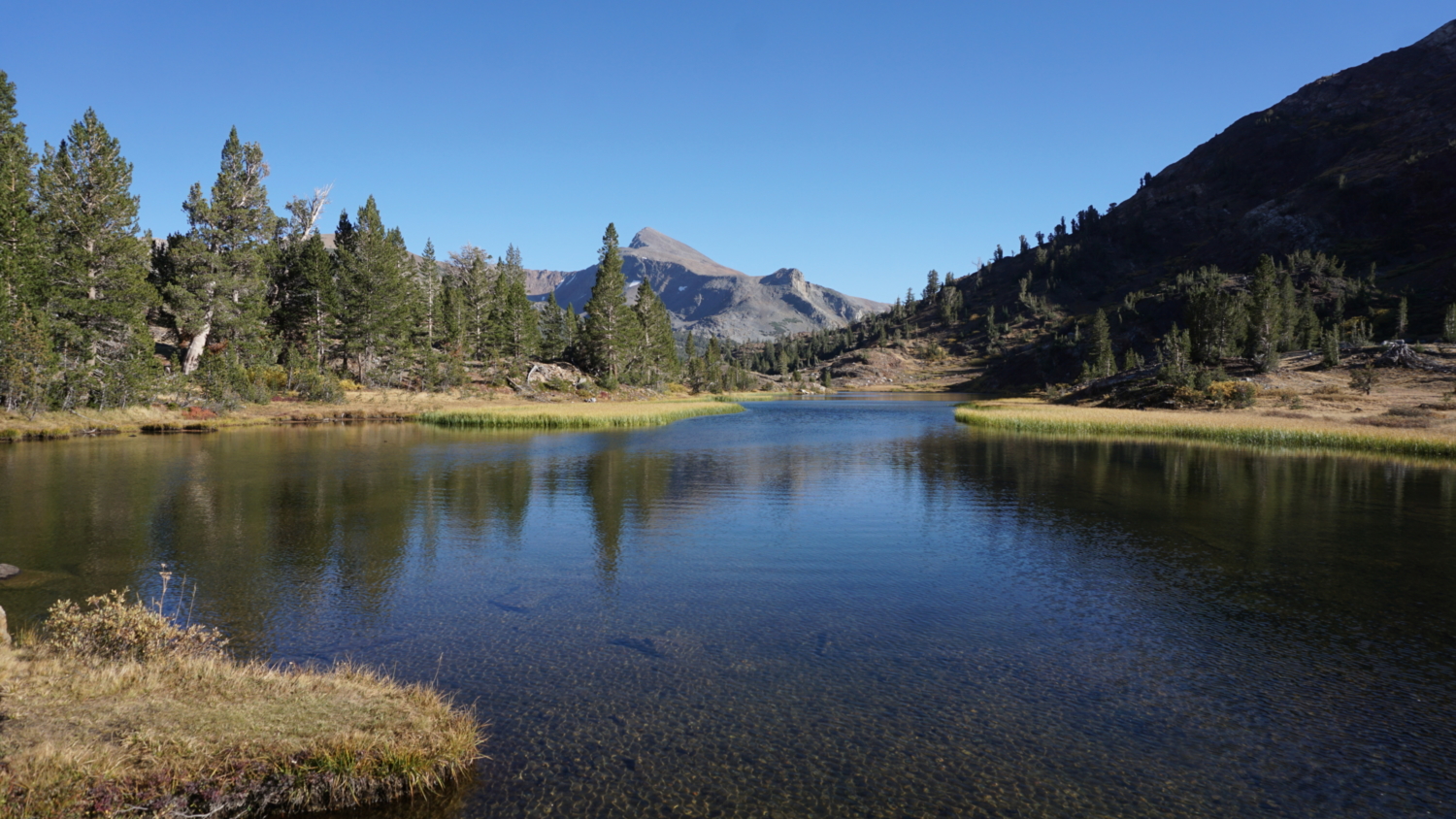 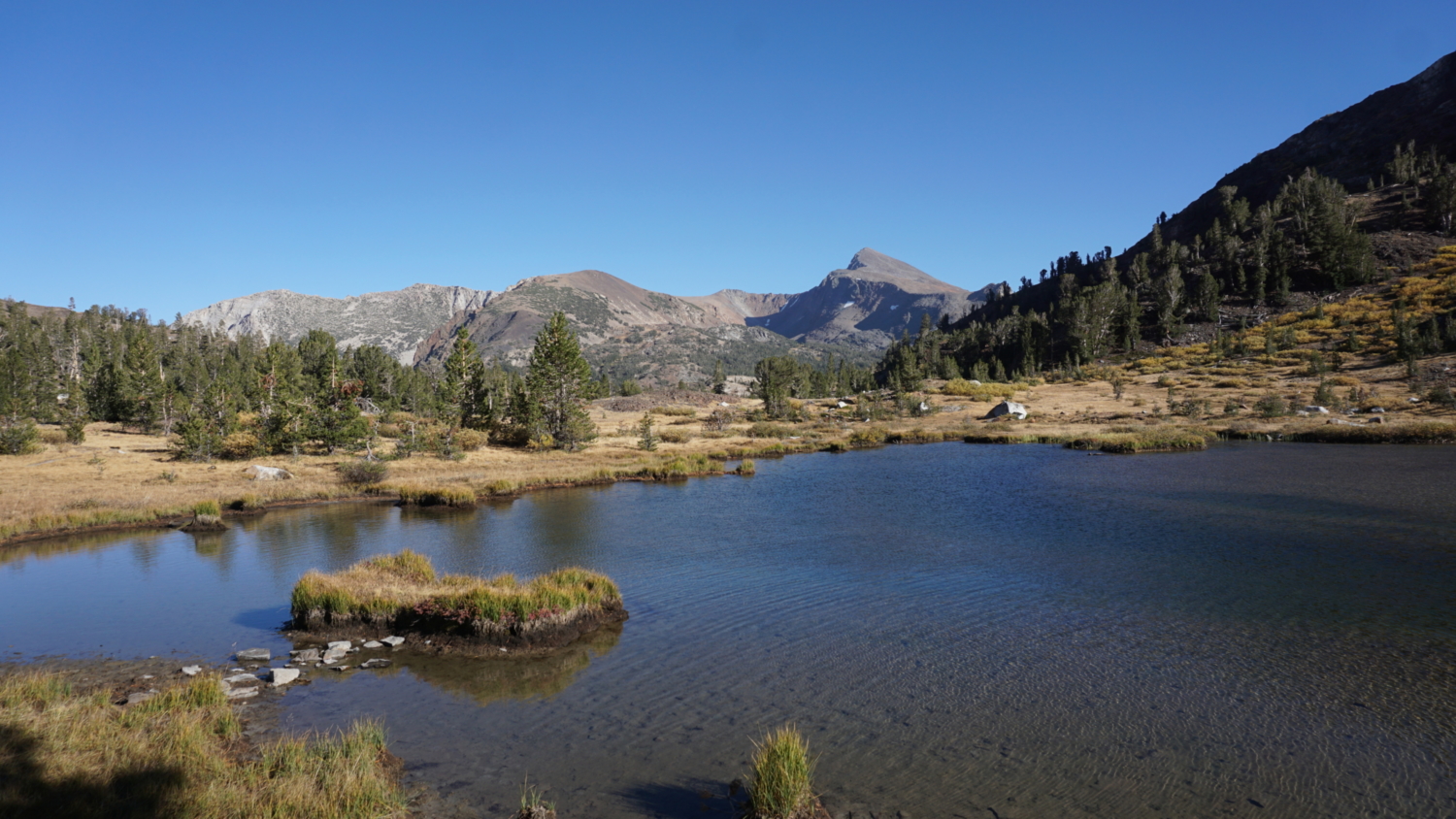 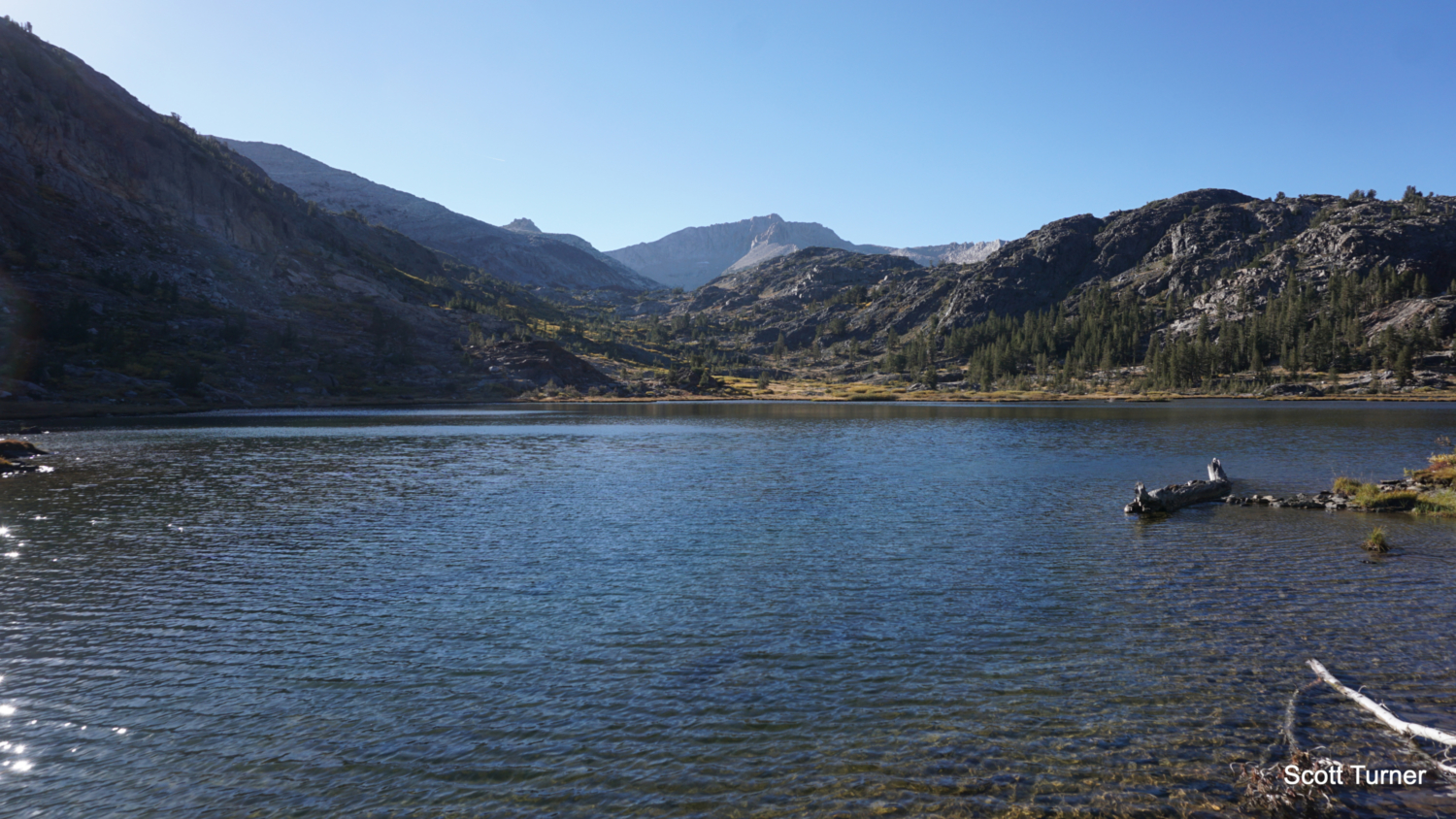 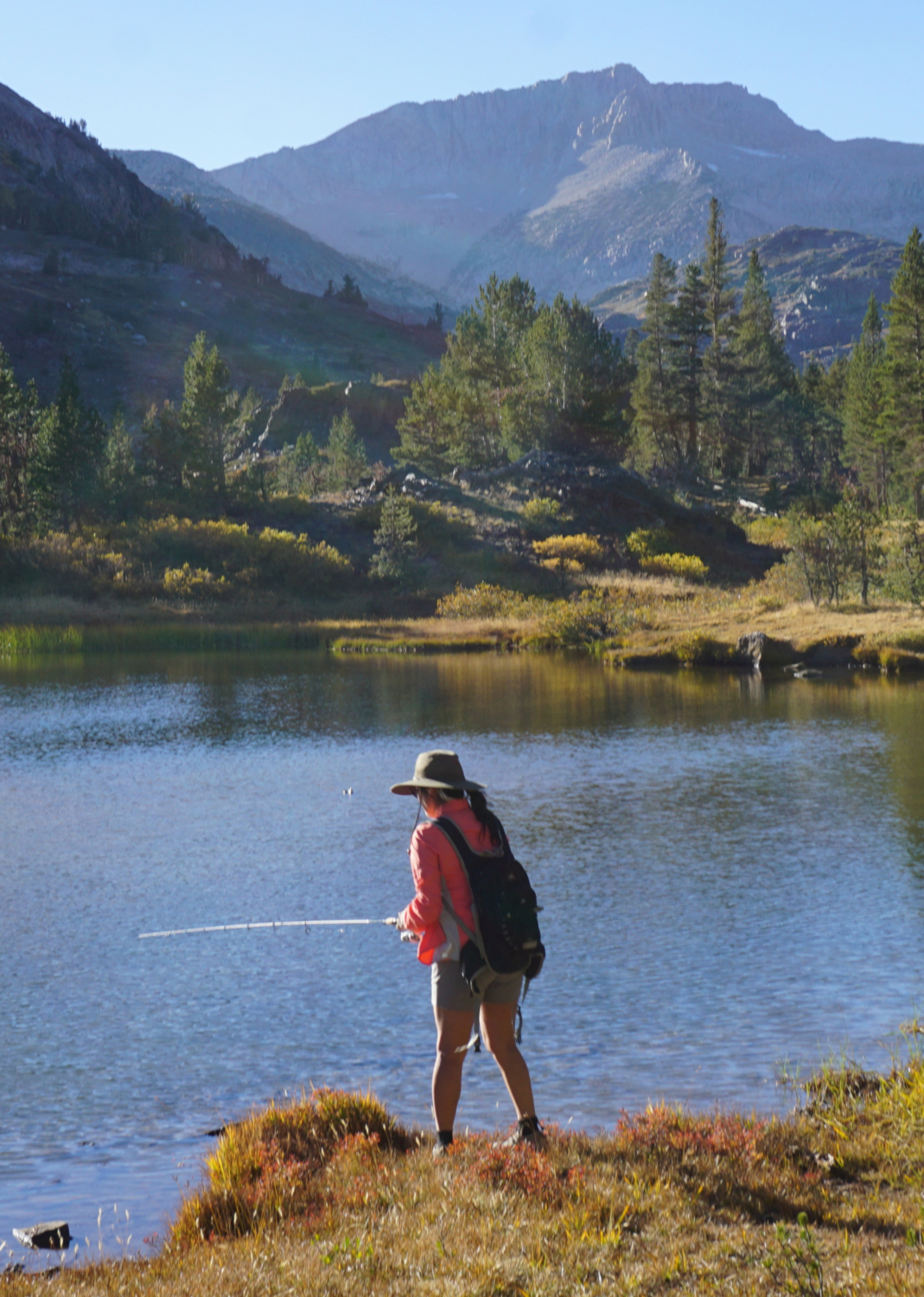 Although a good chunk of the trail is unmaintained, it's actually in great shape. Easy to follow, and not a lot of obstructions.

The trail departs from Junction Campground, so there's a good option for you.

From the junction of US-395 and CA-120/Tioga Road just south of Lee Vining, head west on Tioga Road for 9.9 miles to a junction with Saddlebag Lake Road. Turn right onto Saddlebag Lake Road, and after 0.1 mile, make a left turn into Junction Campground. Look for a turnout with space for about 5-6 cars just before the bridge that crosses Lee Vining Creek.